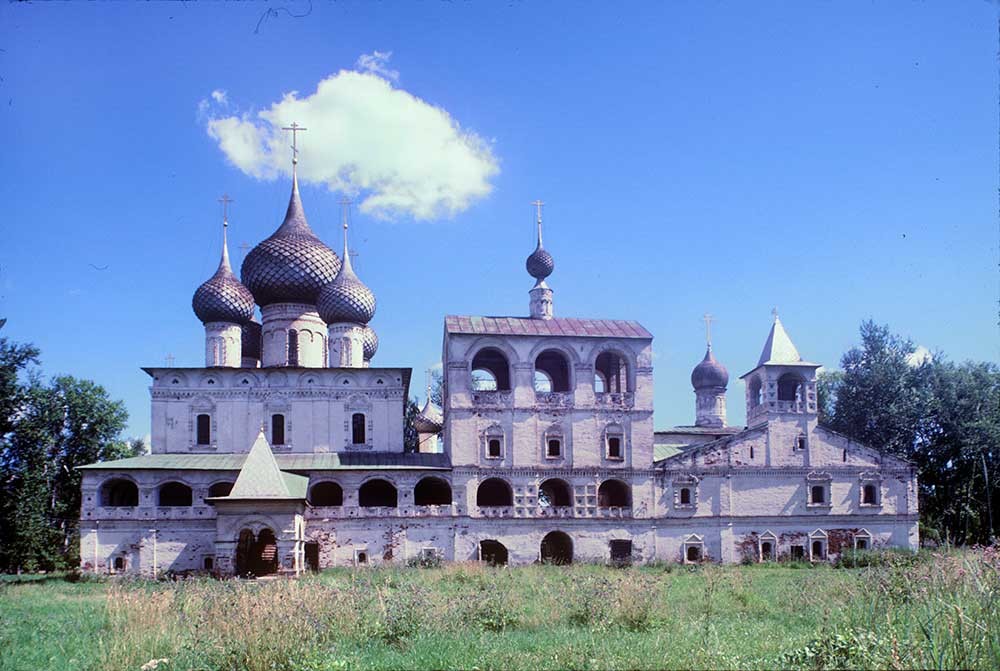 Uglich. Resurrection Monastery, west view. From left: Cathedral of the Resurrection, belfry with Church of St. Mary of Egypt, refectory & Church of Smolensk Icon of the Virgin. July 30, 1997.

No town in the upper Volga basin possesses a more dramatic reputation than Uglich. Ivan the Terrible’s eight-year-old son Dmitry met a violent death here in May 1591, plunging Russia into years of destructive chaos.

In late summer 1910, the Russian chemist and photographer Sergei Prokudin-Gorsky, visited the town and photographed numerous sites, but he seems to have been especially taken by the Resurrection Monastery, a late 17th-century architectural treasure located at the southwest edge of town. Although his original glass negatives of the monastery have not been preserved in the Library of Congress collection, his contact prints provide invaluable information about the monastery ensemble before the Soviet period. 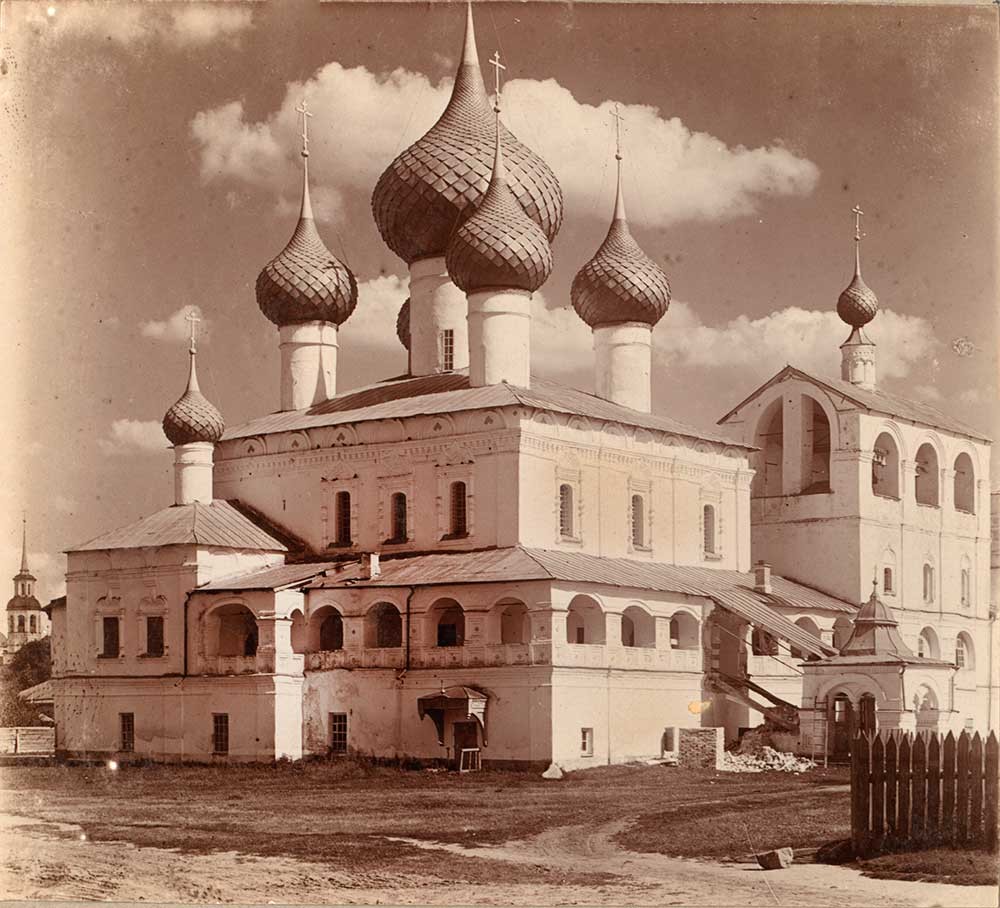 There is no verifiable date for the founding of Uglich, but archeological evidence suggests that a fortified settlement existed by the middle of the 10th century. Its location at a bend in the Volga is considered to have provided the name, derived from the Russian ugol, or angle.

The earliest known written reference to Uglich dates occurs under the year 1148. Like so many other settlements in the Russian heartland, Uglich was sacked and burned in 1238 during the Mongol invasion. Nonetheless, the town recovered under Prince Roman, who ruled in Uglich from 1261 to 1285. 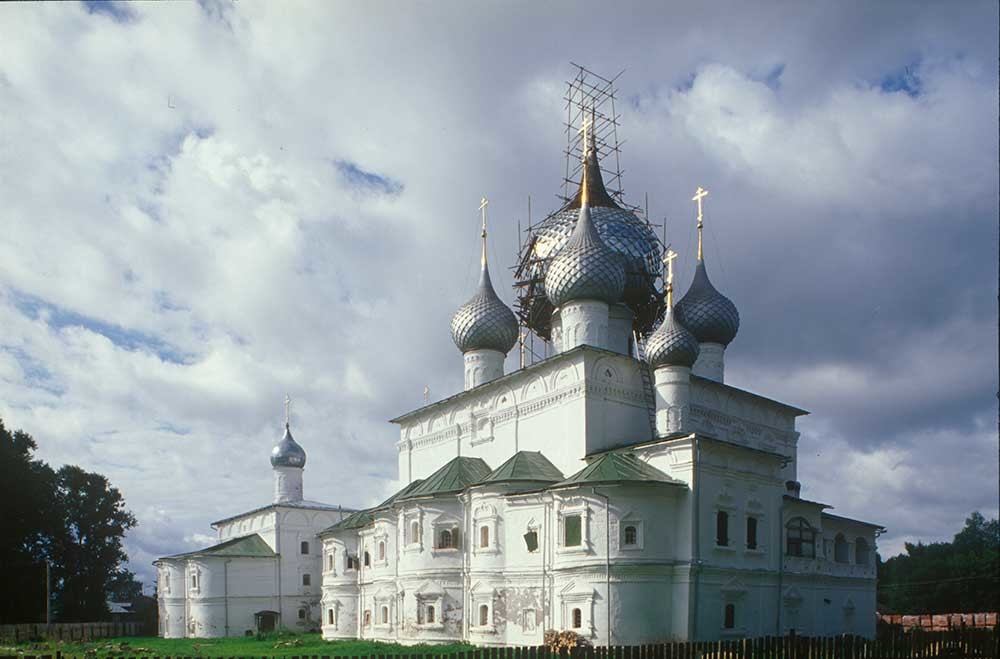 With the death of Tsar Boris Godunov in April 1605, Russia was plunged into a period of dynastic instability and violent factional struggles during the apply-named “Time of Troubles.” Polish claims to the Muscovite throne led to the devastation of much of Russia by cavalry forces under Polish-Lithuanian leadership. 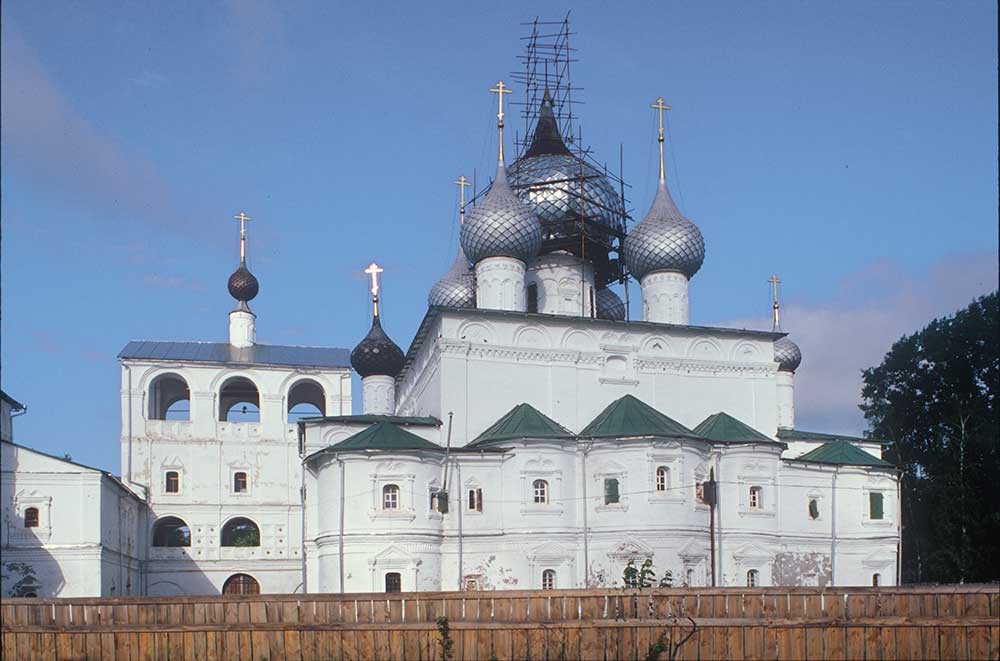 The Uglich territory and outlying areas – including monasteries – were beset as early as 1609, In the spring of 1611, the territory was again ravaged, and the fortified town center was besieged by forces under the command of Jan Sapieha. The town was finally taken with slaughter of thousands and the general destruction of the town. Some two decades would pass before Uglich recovered.

A jewel in the midst of chaos

Much of this turbulent history is reflected in a chronicle of the Resurrection Monastery, which now exists as a rare jewel of a unified architectural ensemble. Although unsubstantiated, some accounts placed the origins of the monastery to the 13th-century reign of Prince Roman. The first written mention refers to events related to local church history in 1482 during the reign of Prince Andrey Bolshoy (“the Big”). 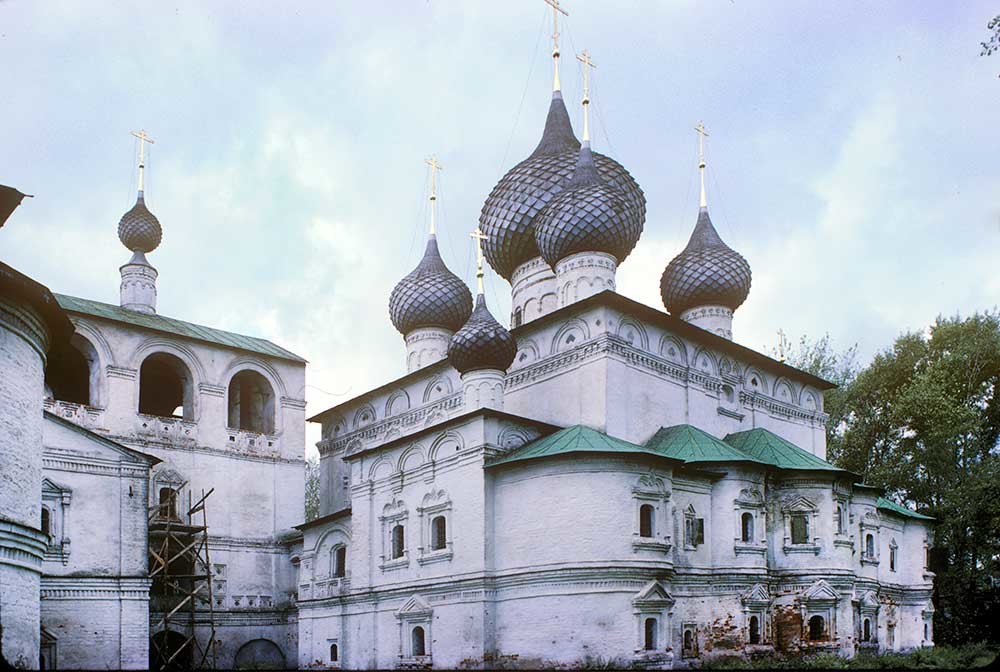 Nothing remains from the early history of the monastery, which was built of logs near Trinity Spring at the Volga River. In 1609, the wooden monastery was stormed by Polish-led forces and burned with great loss of life, including the monastic brethren. Although the monastery was rebuilt, its location near the unstable Volga banks made further development unfeasible.

Despite these difficulties, during the 1630s the Resurrection Monastery produced one of the most prominent clerics of 17th-century Russia, Jonah Sysoevich (ca. 1607-90), the future Metropolitan Bishop of Rostov and Yaroslavl. Probably for this reason, the rebuilding of the monastery was among the major projects undertaken by Jonah following his elevation in 1652 to the Rostov metropolitanate, which included Uglich. 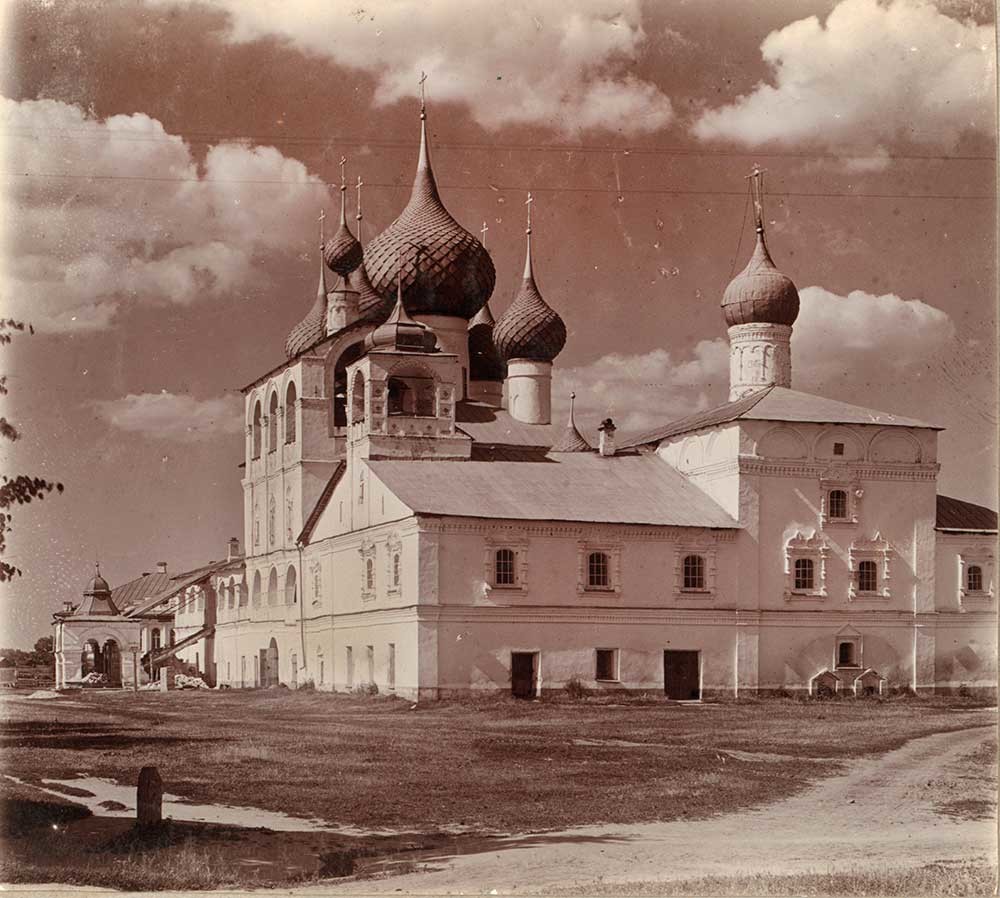 Moved to a location slightly more distant from the Volga, the new Resurrection Monastery was constructed in 1674-77 – a relatively short period for such a project. Not surprisingly, a number of-of its components bear a resemblance to the grand Metropolitan Court, or “kremlin,” that Jonah was building concurrently in Rostov itself.

Prokudin-Gorsky’s photographs include the main Cathedral of the Resurrection, situated at the north end of the ensemble, Monumental yet simple in design, the two-story building has five elongated onion domes in the manner of Rostov’s great churches. Attached to its north façade is a chapel dedicated to Archangel Michael, while its south side has a chapel dedicated to St. James. 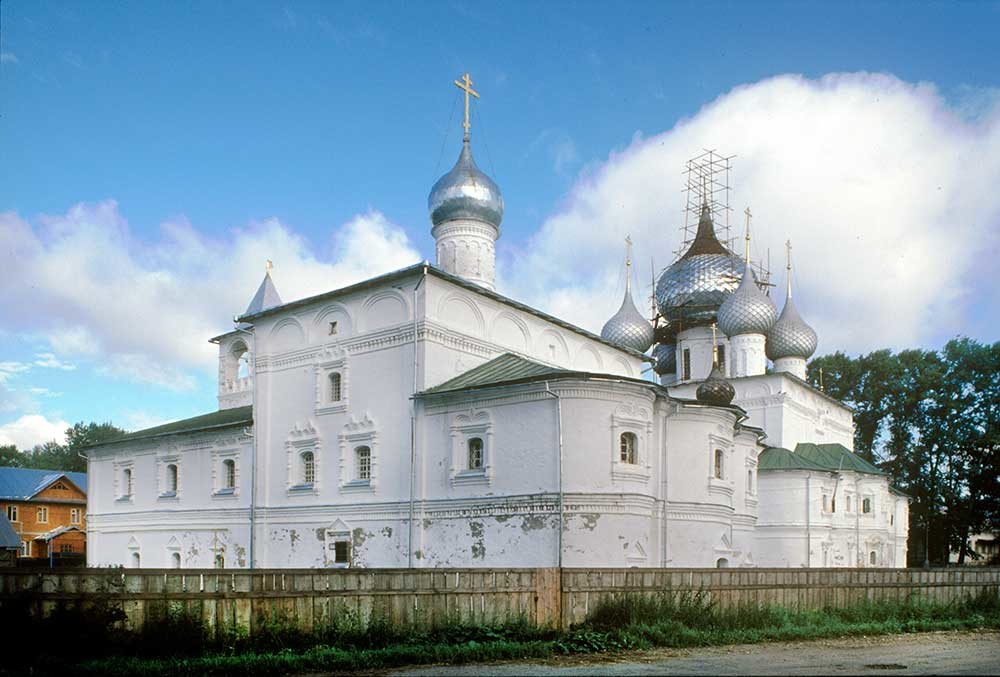 During the same period, a large belfry was built immediately to the south of the cathedral. Visible in Prokudin-Gorsky’s view from the northwest, this distinctive, massive structure, which supported a complement of large bells, closely resembles the great belfry that Jonah constructed at the Rostov kremlin. The third level of the four-story belfry contained the miniature Church of St. Mary of Egypt.

The southern component of the ensemble is the Church of Smolensk Icon of the Virgin, which also contained the monastery refectory. Rising above the attached refectory is a small tower that contained a chiming clock. 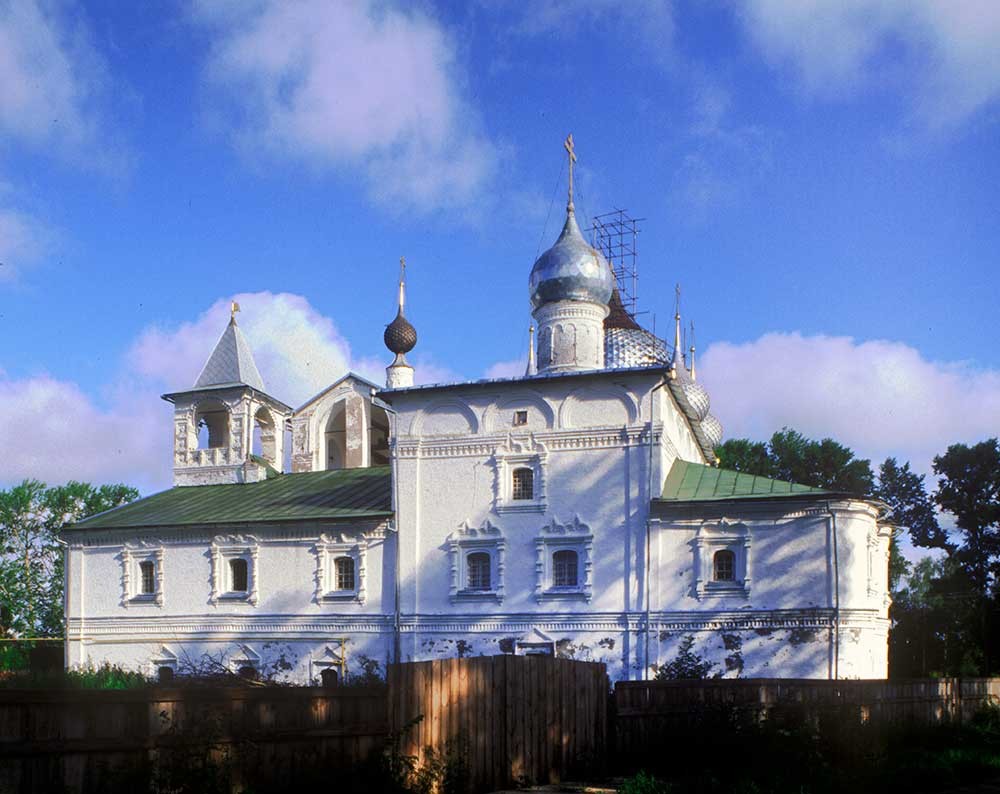 All three buildings were connected by an enclosed gallery. The facades were decorated with ceramic tiles set within recessed squares. The result is an unusual example of monastic buildings linked in a single architectural ensemble.

Although precise information on the identity of the builders is lacking, the Resurrection Monastery has been attributed to Aleksey Ustinov and Ivan Sakulin, with the substantial participation of Metropolitan Jonah. The church interiors had wall paintings by Kostroma icon masters, but due to 19th-century overpainting, only small fragments have survived.

A site closed, then resurrected

In 1764 the Resurrection Monastery was closed as part of Catherine the Great’s restructuring of the monastic system. In a typical practice, its cathedral was adapted for use as a parish church. Part of the refectory church was eventually converted to a religious school. Most of the monastic furnishings were transferred to the nearby St. Alexis Monastery. 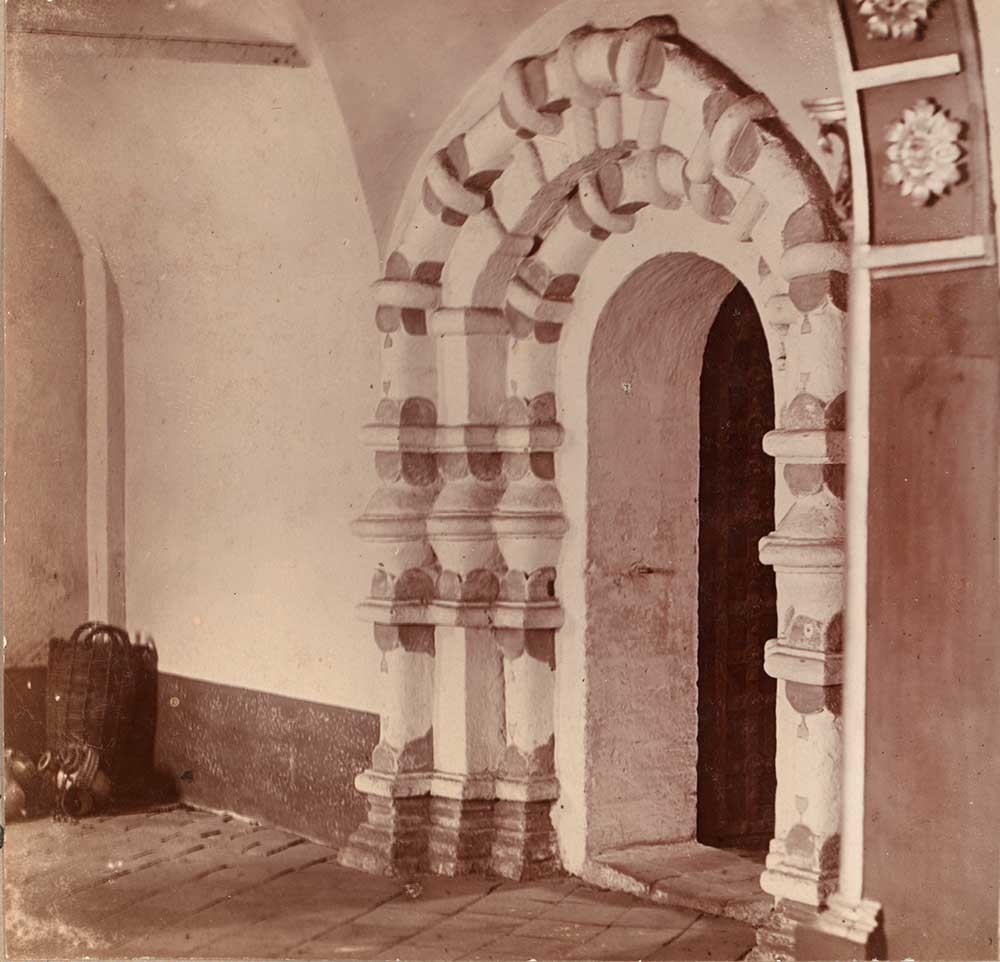 Despite its new location, ground water remained a persistent structural threat, and in the early 19th century major work was undertaken to reinforce the ensemble. In the 1860s the Resurrection Church interior was repainted by the Uglich icon painter Dmitry Burenin.

With the establishment of Soviet power, part of the former monastery was converted to a museum, but in 1924, the church ensemble was closed and converted to a warehouse. In the mid-1930s the buildings were taken by the NKVD, which was supervising the construction of the nearby massive Uglich hydroelectric plant, part of the vast Volga River project. 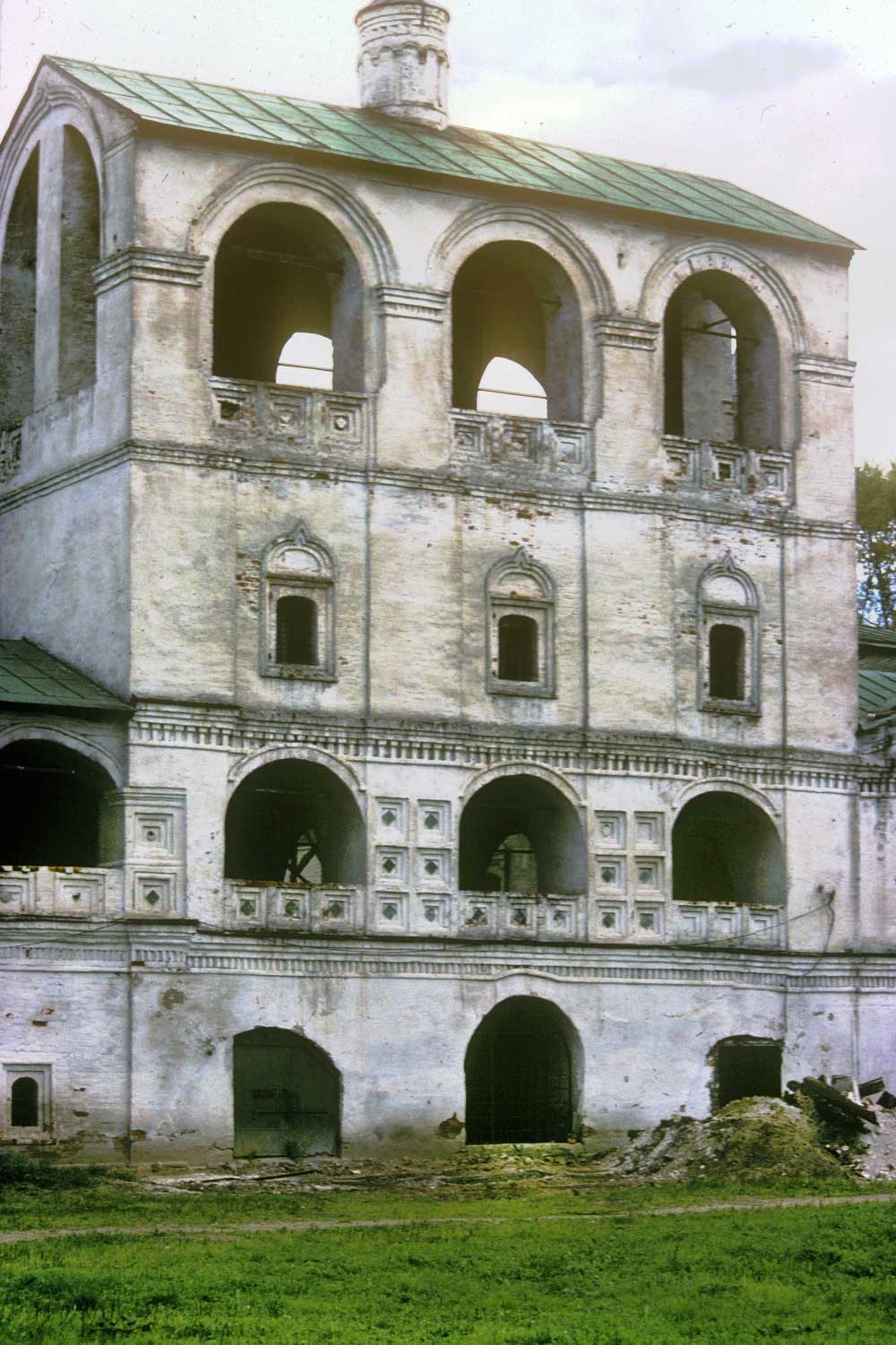 Following World War II, engineering work succeeded in stabilizing the building foundations, but attempts to create a museum foundered in the 1980s. Only in 1999 was the ensemble returned for use as a monastery by the Orthodox Church. Despite the many threats to its existence, the revived Resurrection Monastery has survived and serves as a reflection of almost four centuries of Russian history.

In the early 20th century the Russian photographer Sergei Prokudin-Gorsky devised a complex process for color photography. Between 1903 and 1916 he traveled through the Russian Empire and took over 2,000 photographs with the process, which involved three exposures on a glass plate. In August 1918, he left Russia and ultimately resettled in France with a large part of his collection of glass negatives. After his death in Paris in 1944, his heirs sold the collection to the Library of Congress. In the early 21st century the Library digitized the Prokudin-Gorsky Collection and made it freely available to the global public. Russian websites now have versions of the collection. In 1986 the architectural historian and photographer William Brumfield organized the first exhibit of Prokudin-Gorsky photographs at the Library of Congress. Over a period of work in Russia beginning in 1970, Brumfield has photographed most of the sites visited by Prokudin-Gorsky. This series of articles will juxtapose Prokudin-Gorsky’s views of architectural monuments with photographs taken by Brumfield decades later.