5 tips for an unforgettable adventure in Veliky Novgorod: What to do, see and drink? 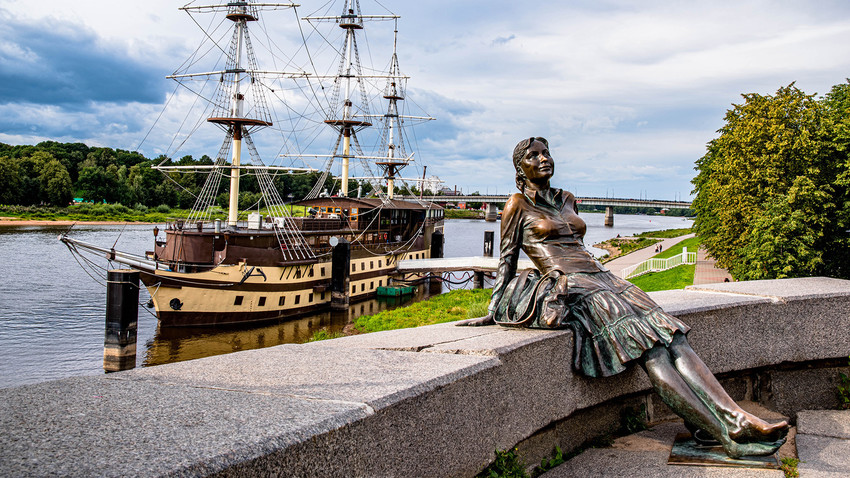 Legion Media
Along the road from Moscow to St. Petersburg, there are plenty of cities that will inspire you to forget your plans and immerse yourself in the world of Russian history, traditions and beauty. Russia Beyond explores the city of Veliky Novgorod in order to spice up your stay here and inspire you with a desire to explore Russia.

Veliky Novgorod is older than the Russian state itself and is the cradle of Russian civilization, and it’s a rare place where you can see the country’s oldest religious and civil architecture. The city is definitely worth seeing!

Well, you’ve arrived in the city, checked into your hotel and are ready for adventures. It’s not a secret that sightseeing can sometimes be very challenging ‘work’.

If you want to make the city tour more diverse, you can take the Bar’skie zabavy (“The lords’ amusement”) tour that will walk you around the city with stops in the most interesting bars where it’s possible to have degustations of the popular local cordials. The tour will explain what Novgorod citizens used to drink 500 years ago; how they prepared themselves before a night out; as well as how the bars or taverns of the time looked like (and when they first opened in Russia ).

Have you ever wandered around a cemetery in an ancient city at night? Well, we did it in order to write this article. Moreover, it was quite interesting: just make sure you are in a group of friendly people and have lamps and rubber boots; also, don’t be too sensitive. 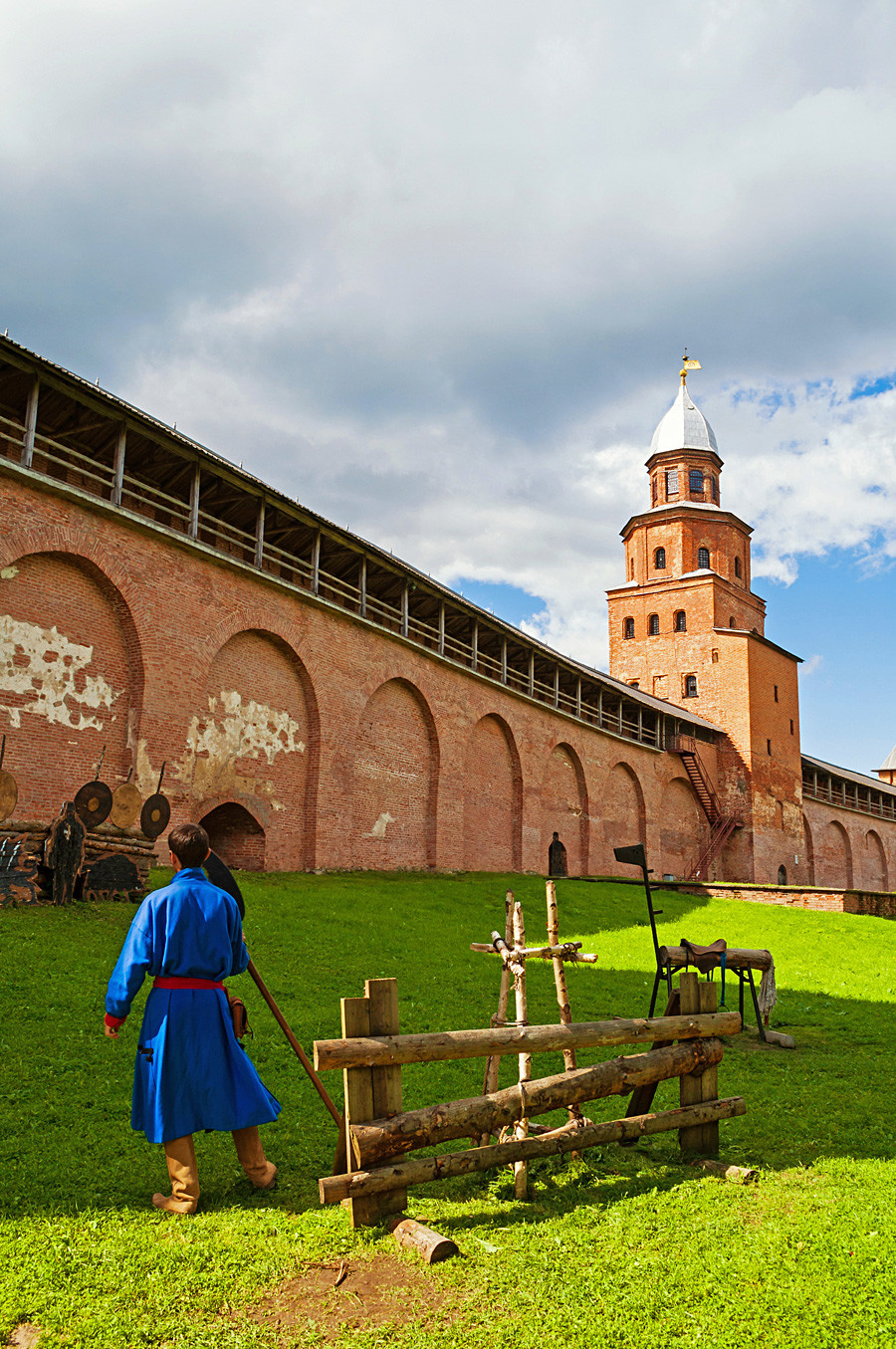 While you are looking around waiting for the rising of the dead, your guide will tell you how people were buried in medieval Novgorod; explain where the cemetery symbols of the 18th-20th centuries originated from; how the funeral services industry changed in Soviet times; and where the famous Novgorodians found their last refuge.

For other special city tours (dedicated to the local community of Old Believers, ancient Russian icons, the history of Veliky Novgorod’s kremlin and the most important places of the city), as well as for more information on organising them, you may visit the Rus Novgorodskaya tourist center website.

2. Admire the heart of the city: Veliky Novgorod’s kremlin

Believe it or not, but the kremlin is the heart of many ancient Russian cities, not only Moscow. Located on the bank of the Volkhov River, this place is very picturesque with its bastions and golden domes, looking like a floating island that is ready to drift away.

Erected in the 11th century and occupying a place in UNESCO World’s Heritage List, this ancient fortress was built from stone and brick, and had the purpose to protect the city center. This is definitely the city’s heart and the number one place to visit in Veliky Novgorod. 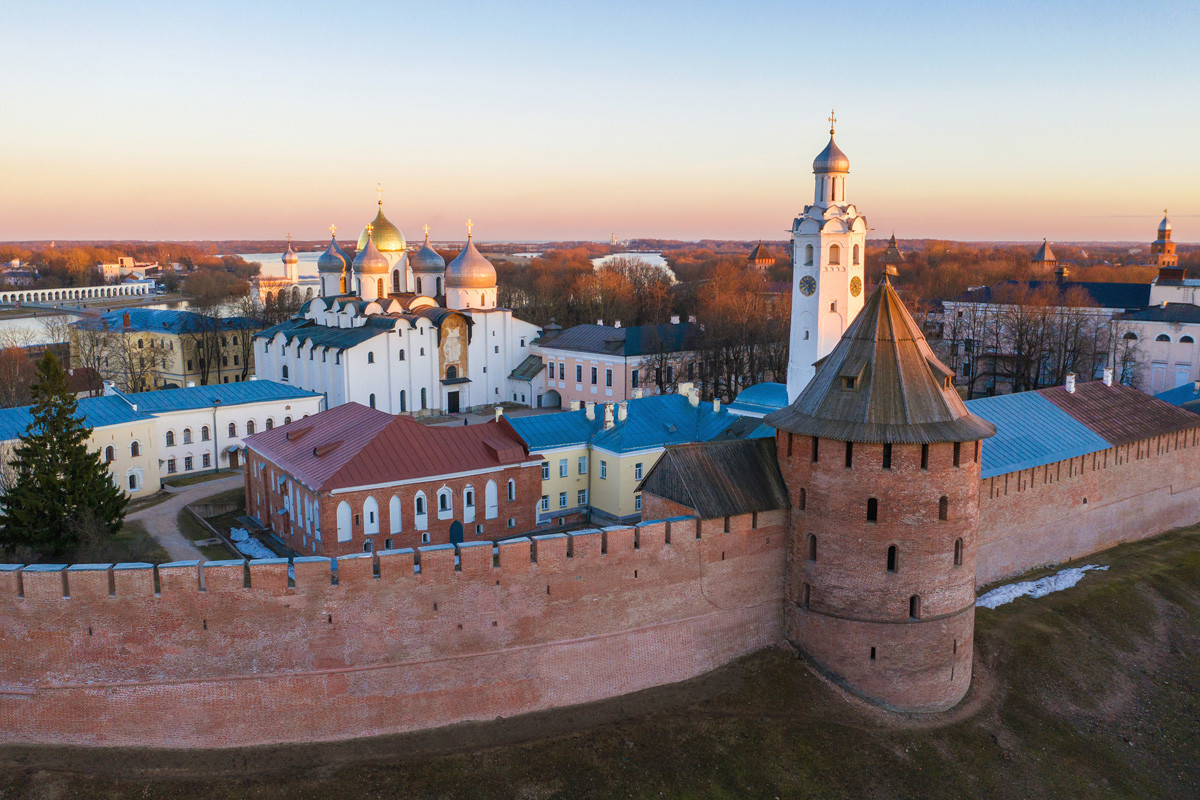 The kremlin’s main treasure, as well as in the entire city, is the 11th century Saint Sophia Cathedral with original frescoes of St. Konstantin and Elena that have been carefully preserved, as well as the 12th century priceless icon of the Sign of the Mother of God, which according to legend helped Novgorod in its battle against Suzdal. The cathedral also holds the relics of Russian saints and princes.

The area on the opposite side from the kremlin embankment got its name from the former residence of Prince Yaroslav the Wise. The architectural ensemble includes many priceless architectural works, with churches dating from the 12th to the 17th centuries, such as the most ancient one – the Byzantine-style St. Nicholas Cathedral. 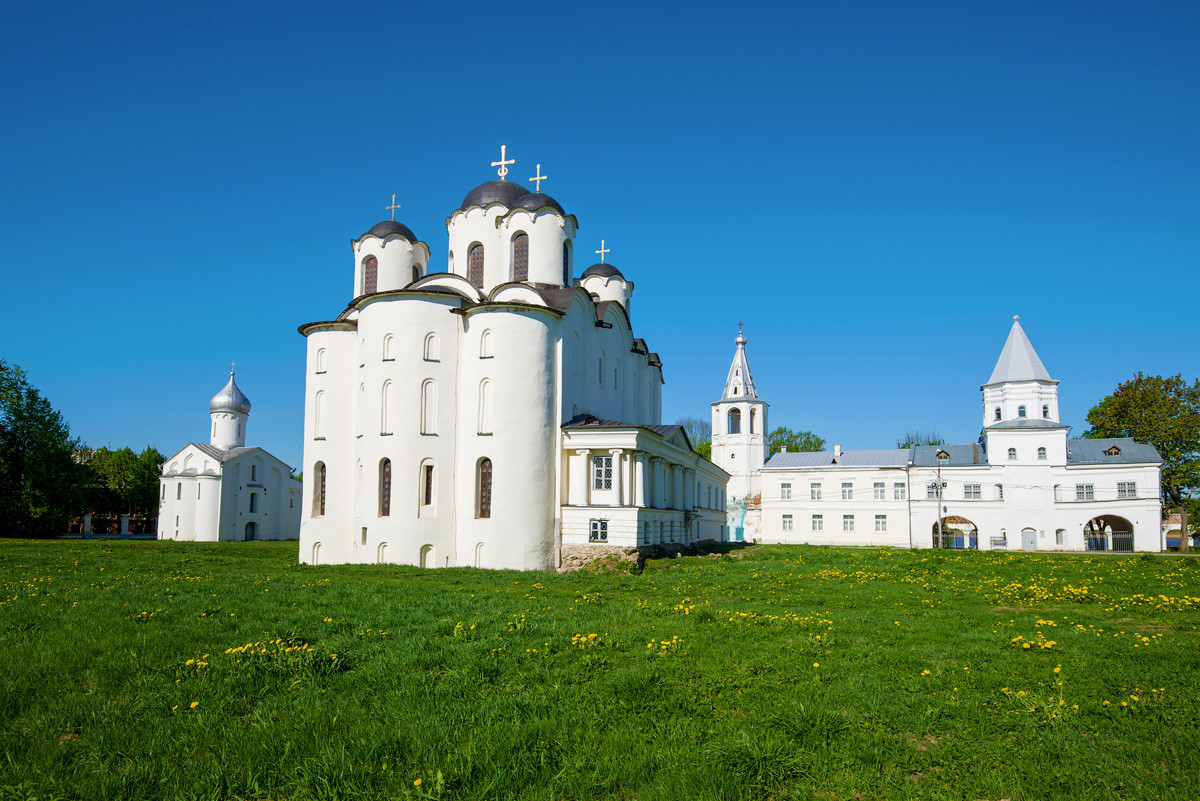 As the city was a member of the Hanseatic League, its marketplace was the largest on the trade route from the Varangians to the Greeks, with a vast variety of goods ranging from fur to honey. The old wall, which looks a lot like an ancient aqueduct, is a part of the Novgorod Marketplace building, and still stands on the riverside.

There is a cute monument to a tired tourist woman on the riverside in the most picturesque place, just in front of the kremlin. Don’t forget to take a picture and to leave a coin in the girl’s shoe; they say it brings good luck!

If you want to get the best view of the city, then you should definitely visit the Flagship Frigate restaurant, where you can have dinner in a ship that is moored to the shore of the Volkhov River, just in front of the kremlin. It’s a great place to celebrate your adventure.

There is also Zavod Bar on German Street that offers dishes cooked in a real Russian oven and specialties such as locally produced liquors (the factory that produces them is called Alcon). 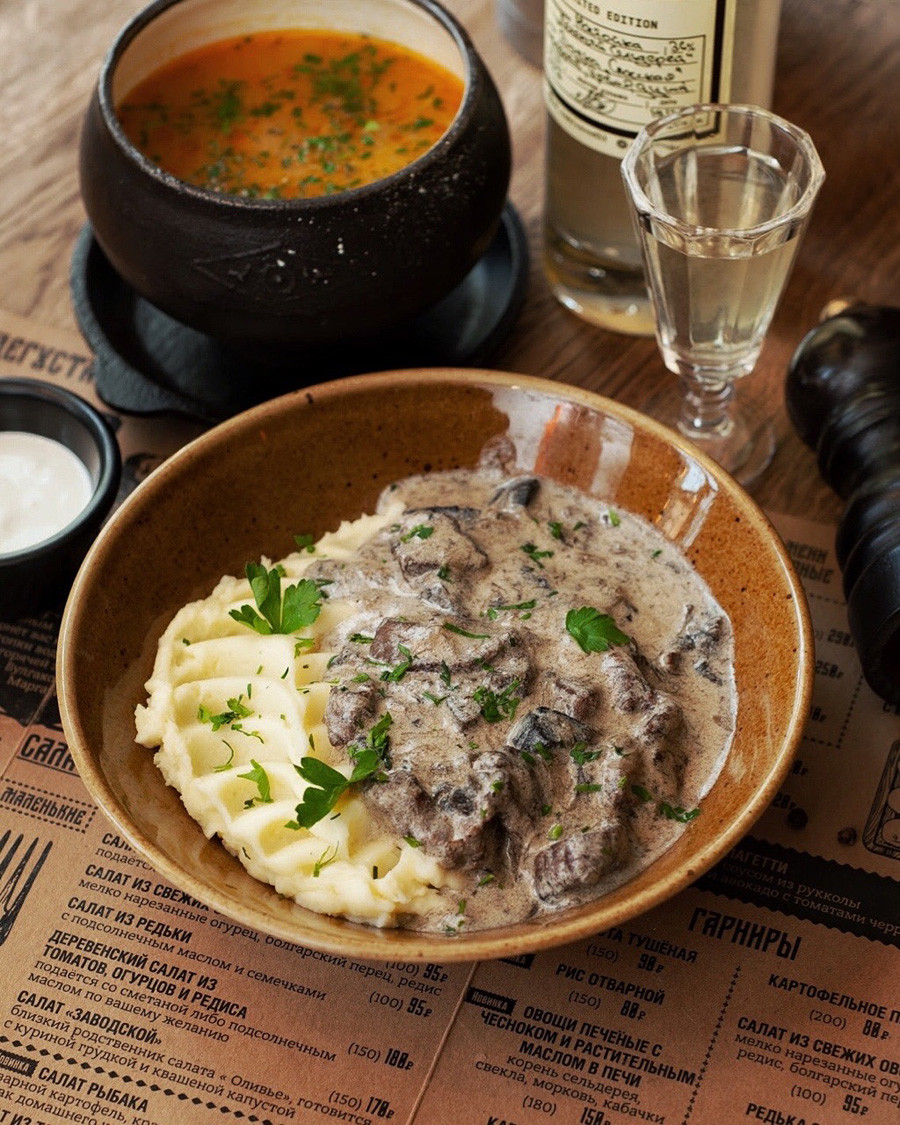 The Berg House on Big Moscow Street serves traditional merchant cuisine and is located in an original 19th century mansion.

Among the specialities of local cuisine are cabbage soup, various dishes made of fish, such as pike cutlets, as well as the national alcoholic drink, medovukha.

If you want to take home some souvenirs, you can visit one of the many gift shops and buy local sweets and desserts, such as gingerbread, ‘Dunkina radost’ candies, as well as spruce cone honey. 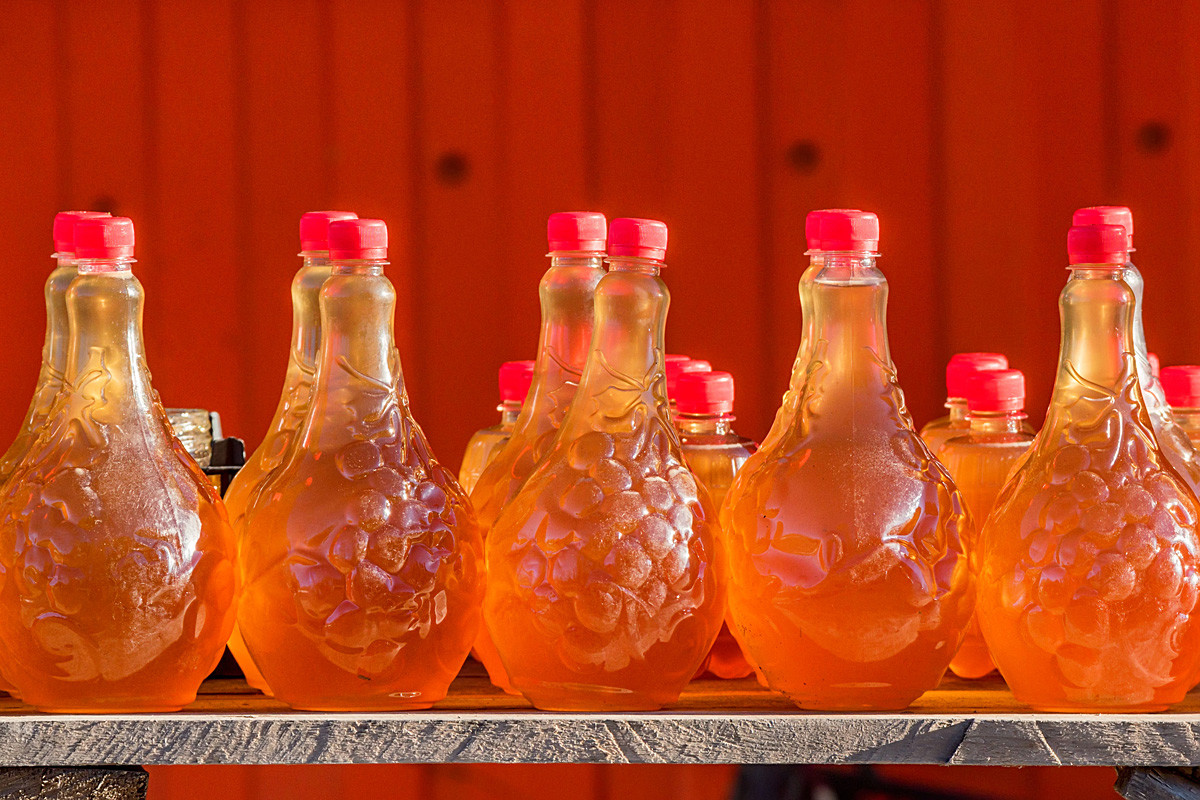 In order to pick up something truly special after your stay in Veliky Novgorod, don’t hesitate to buy some of the clothes, bed linen, elegant napkins and tablecloths that are produced at the Krestetsy Line Factory. They still preserve the unique 19th century traditions of Russian folk embroidery.

Local liquor and medovukha will also be a special gift to bring home.