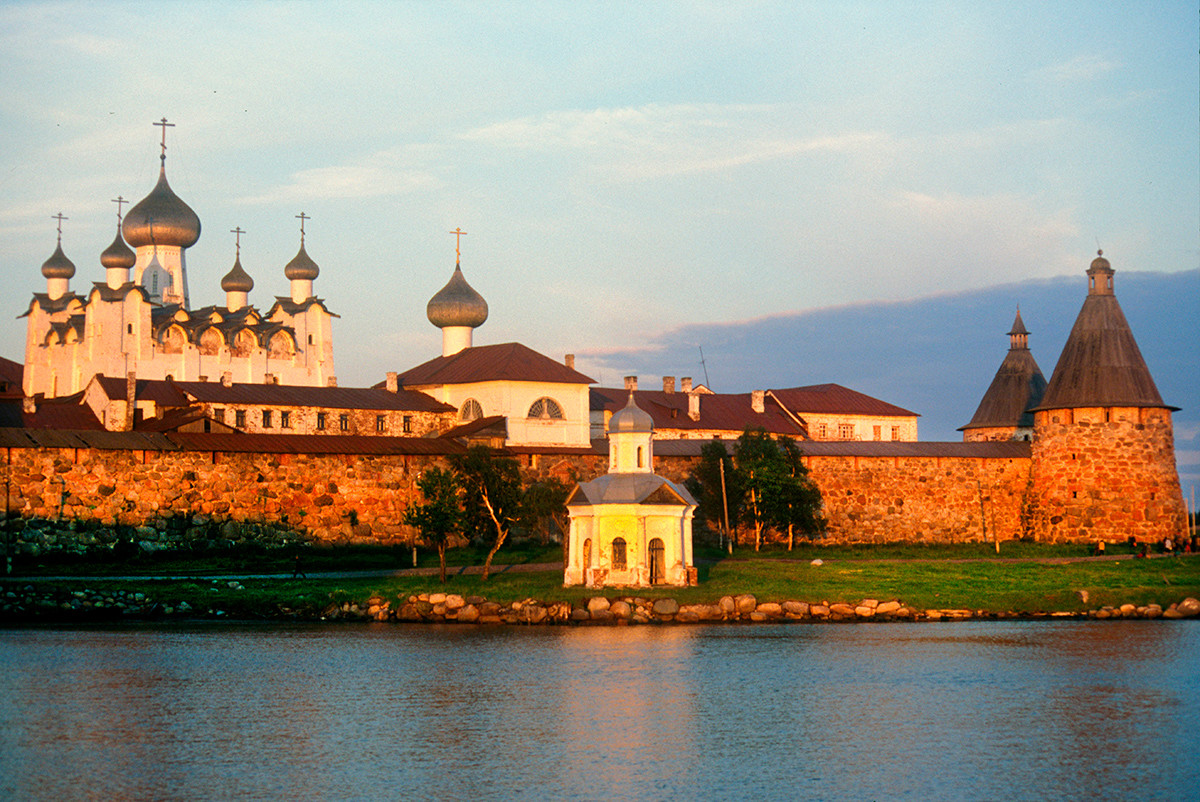 Few sites in Russia have witnessed a more turbulent history than Great Solovetsky Island, part of the Solovtsky archipelago in the southwestern area of the White Sea and the location of the famed Transfiguration Monastery.

In late summer of 1916, as the Great War raged in Europe, Russian chemist and photographer Sergei Prokudin-Gorsky visited the island. His special passage during such difficult times was arranged by a state commission to photograph railroad construction to the new port of Murmansk, built to receive military supplies from the Western allies. Prokudin-Gorsky traveled by rail to the White Sea port of Kem and then 45 km by boat to Great Solovetsky Island. 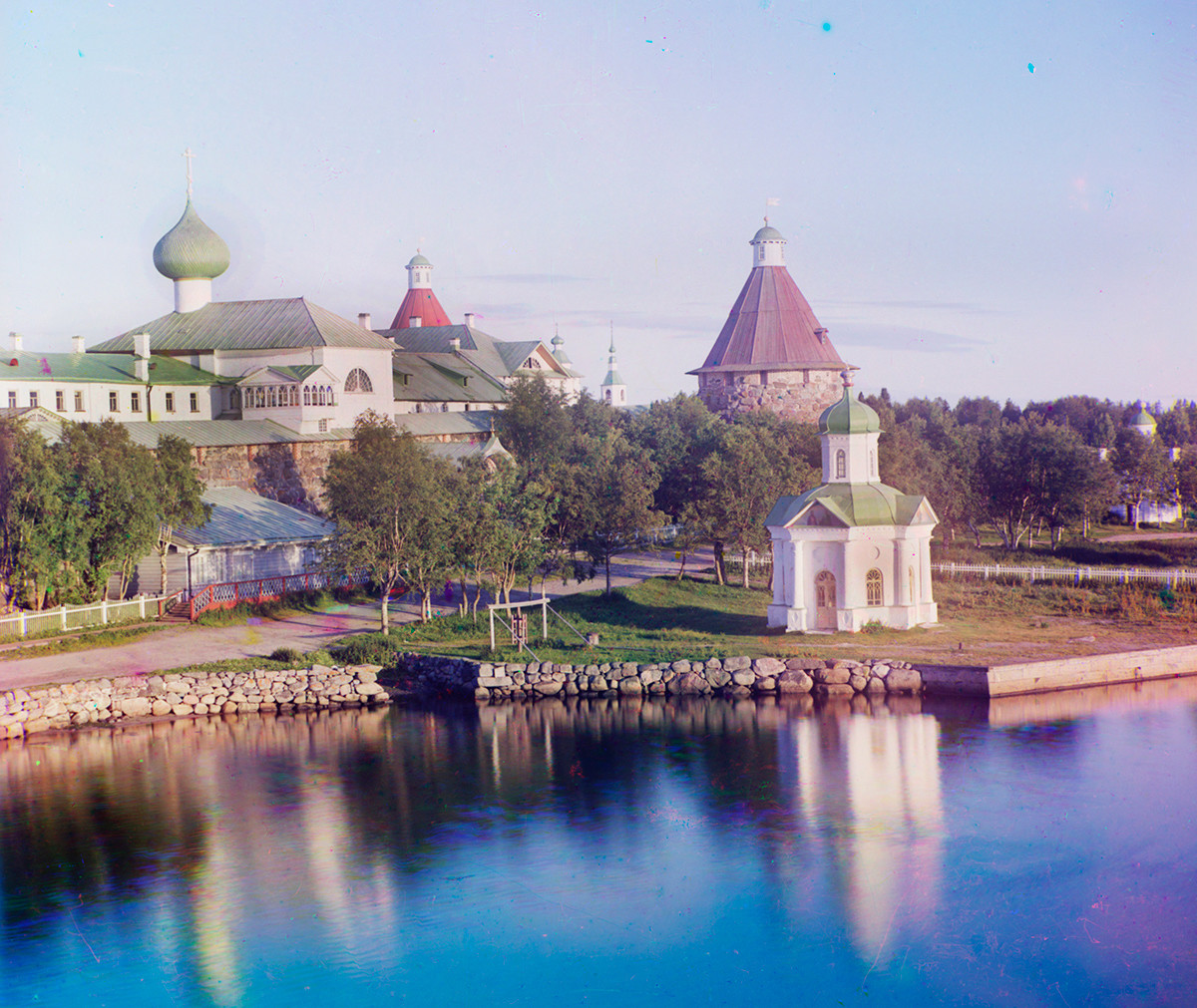 The Prokudin-Gorsky Collection at the Library of Congress contains 20 photographs taken at or near the monastery. All but three of the original glass negatives with the three-color separations have been preserved. Among the missing originals are two panoramas of the main ensemble with the Transfiguration Cathedral, views that exist only in monochrome versions from his album of contact prints.

Prokudin-Gorsky’s Solovetsky photographs include not only the monumental church ensemble, but also stunningly lyrical views - some of which he called “etudes” - that convey the island’s natural setting. My photography at Solovki occurred in the summers of 1998 and 1999, a fortuitous interlude between prolonged restoration projects that have covered major buildings in scaffolding. 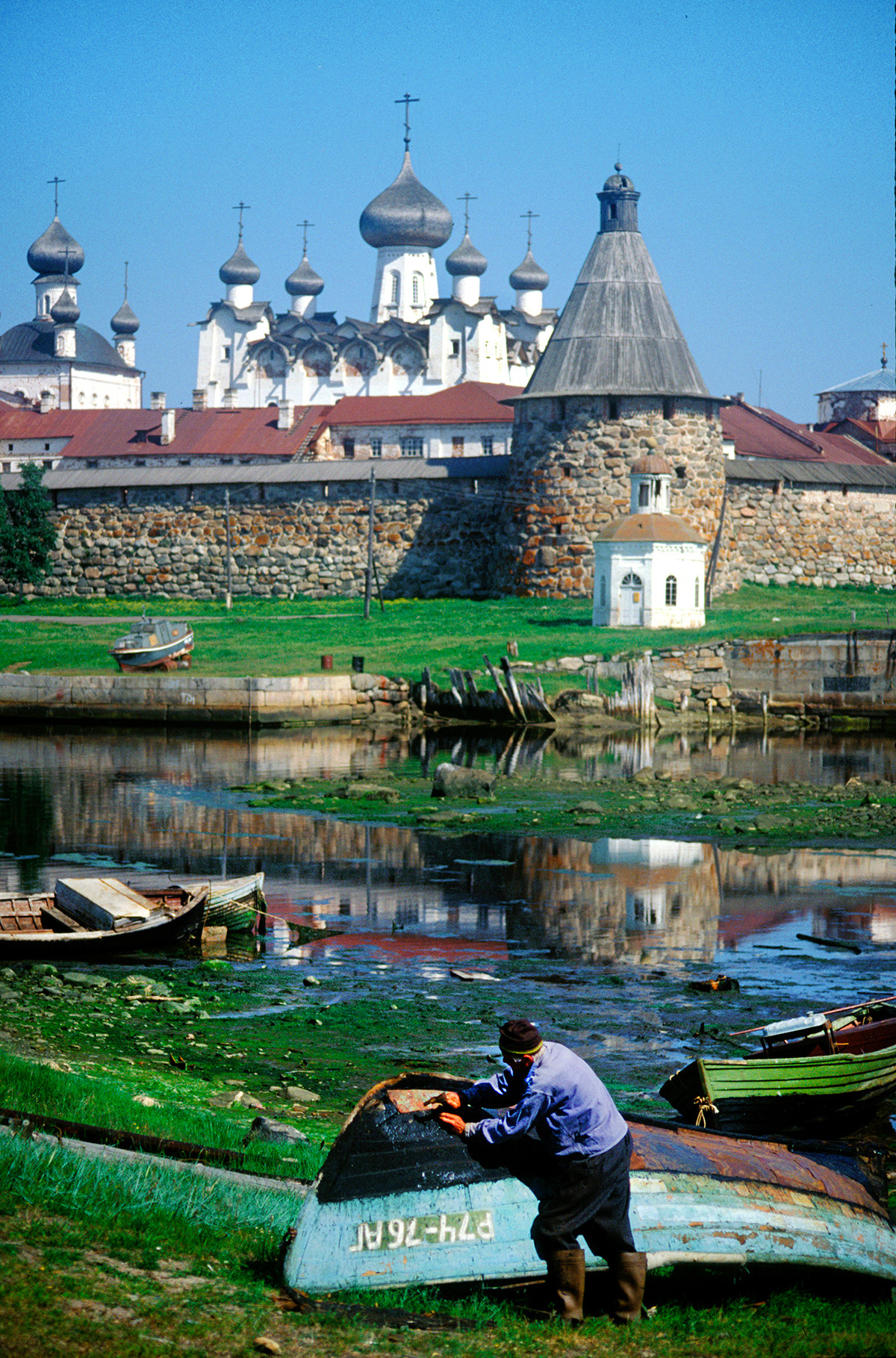 The Solovetsky Archipelago's first known Russian settlement dates from 1429, when the monk Zosima joined forces with Herman, a hermit familiar with the islands. The elderly Zosima died in 1435, but the following year another monk, Savvaty, returned to found a monastery dedicated to the Transfiguration of the Savior. Initially the monastery belonged to the Russian city-state of Novgorod, but after Novgorod’s subjugation to Moscow in 1478, the young monastery became a strategic outpost for Muscovy. 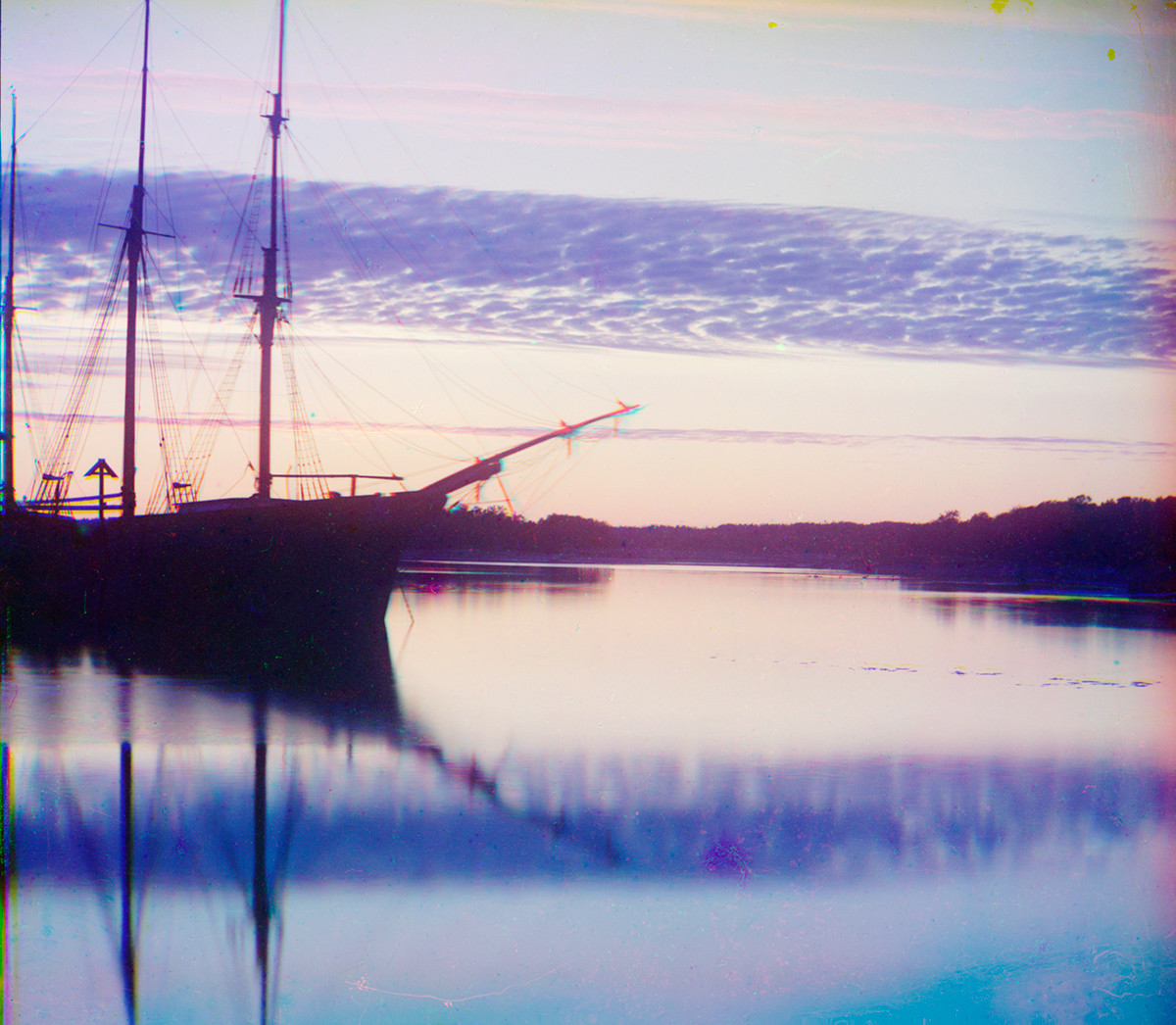 The monastery flourished in the mid-16th century under the direction of Philip (Feodor Kolychev), a Moscovite monk of noble origins who left a privileged existence in 1537, joined the Solovetsky monastic community, and in 1547 became its spiritual leader (hegumen). During the next 18 years, Philip guided a program of construction that transformed the monastery with monuments of stone and brick such as the Cathedral of the Transfiguration of the Savior (1558-1566). 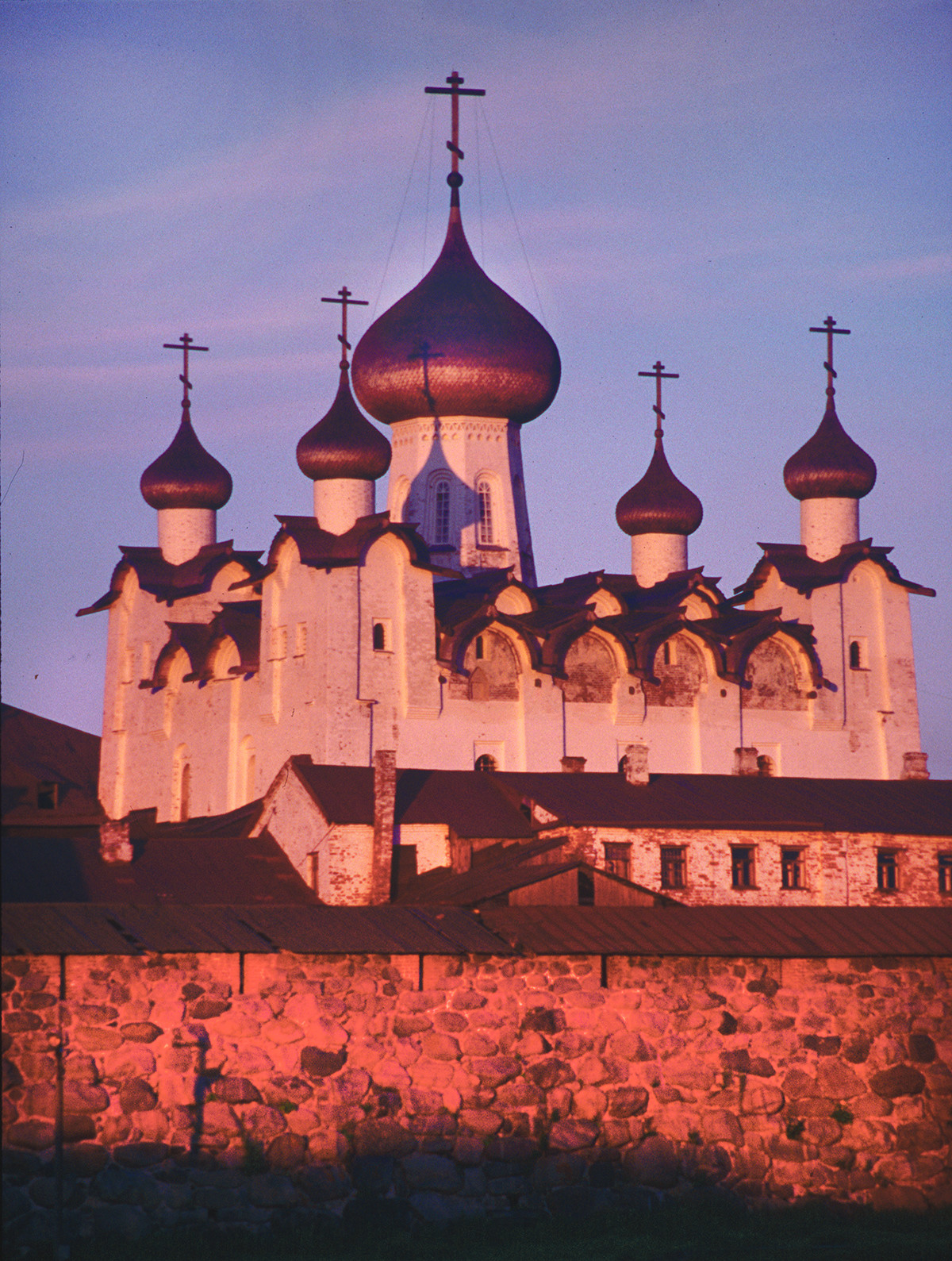 In the summer of 1566, Philip was called back to Moscow by Ivan the Terrible, who supported the monk’s appointment as Metropolitan (head) of the Russian Orthodox Church. Tragically, his public resistance to acts of political terror by Ivan IV during the late 1560s led to his exile and death in 1569.

Intensive development at the Solovetsky Monastery continued throughout the late 16th century with the construction of additional churches and other monastic buildings. Equally impressive were the monastery’s massive walls and round towers, built between 1582 - 1594 by monks and hired labor who manhandled thousands of granite boulders into place on the marshy ground. 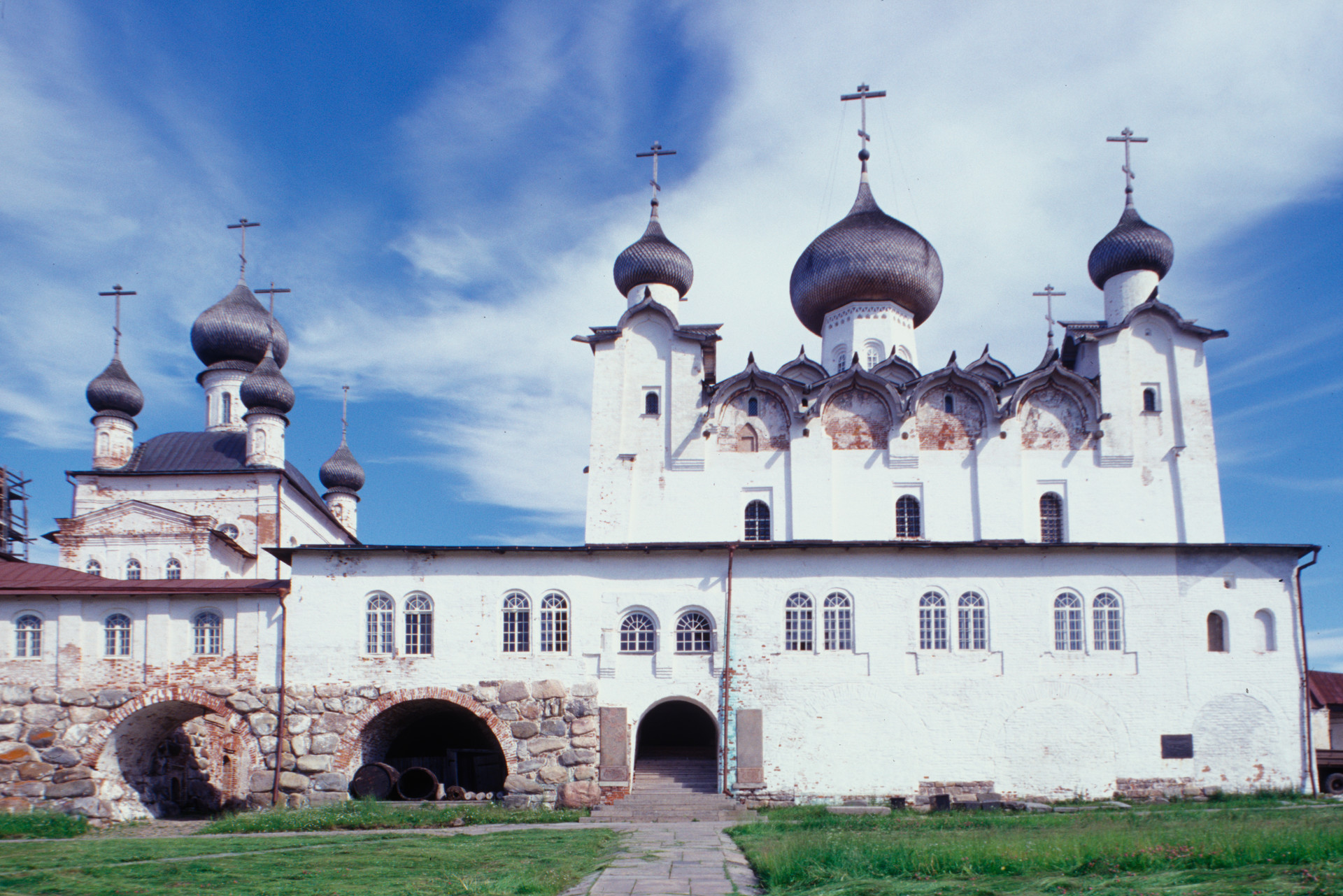 Despite political and religious upheavals during the 17th century, the Solovetsky Monastery remained one of Muscovy’s most prestigious religious centers, with close connections to the Muscovite court. The monastery received many donations, churches were repaired, and other buildings were added in the 18th century. 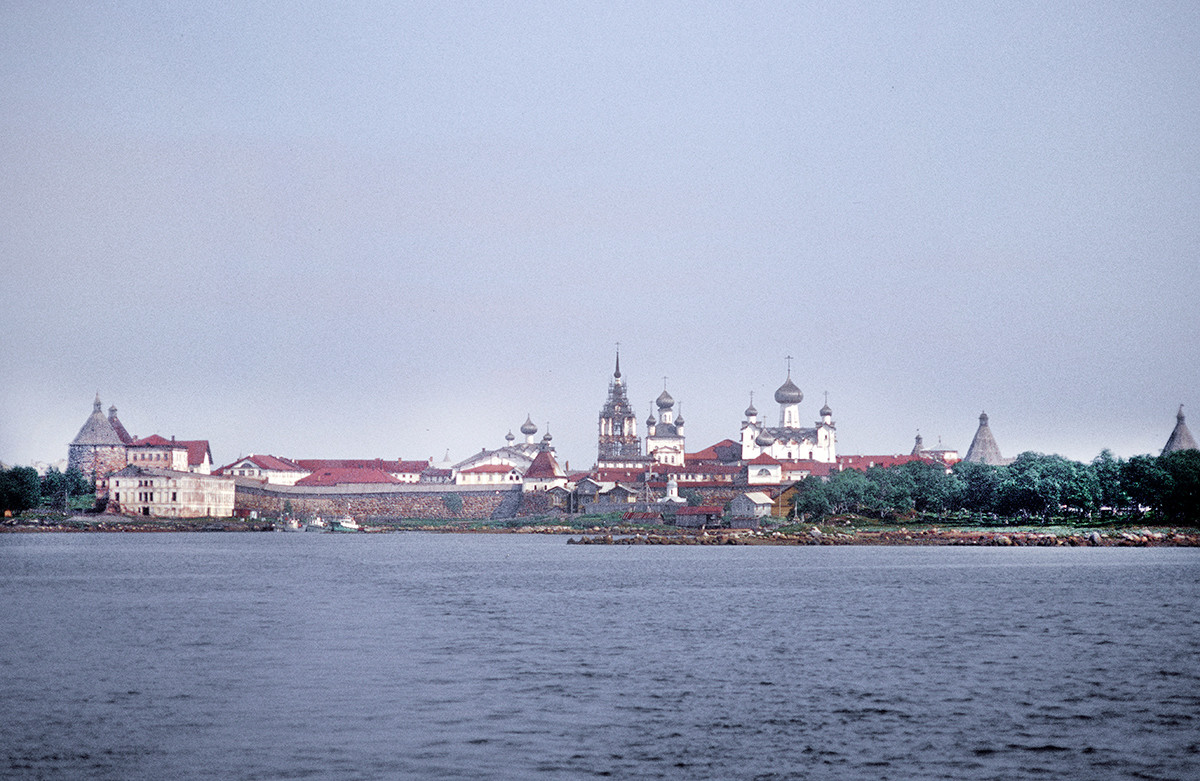 During the 19th century, the monastery became a major pilgrimage site, with new chapels and churches, as well as its own steamships. Efforts to accommodate pilgrims and other visitors improved with the construction in 1864 of the large Preobrazhensky (Transfiguration) Hotel, an initiative of archimandrite Porphyry, abbot of the monastery from 1859 to 1865.

Although Prokudin-Gorsky did not photograph the hotel, his sunset view of a ship moored in the harbor includes a portion of the hotel dock. The dock also served as a platform for his photograph, taken in late afternoon sunlight, of the area near the monastery entrance. Some eight decades later, I used the same platform for an effect with the setting sun. 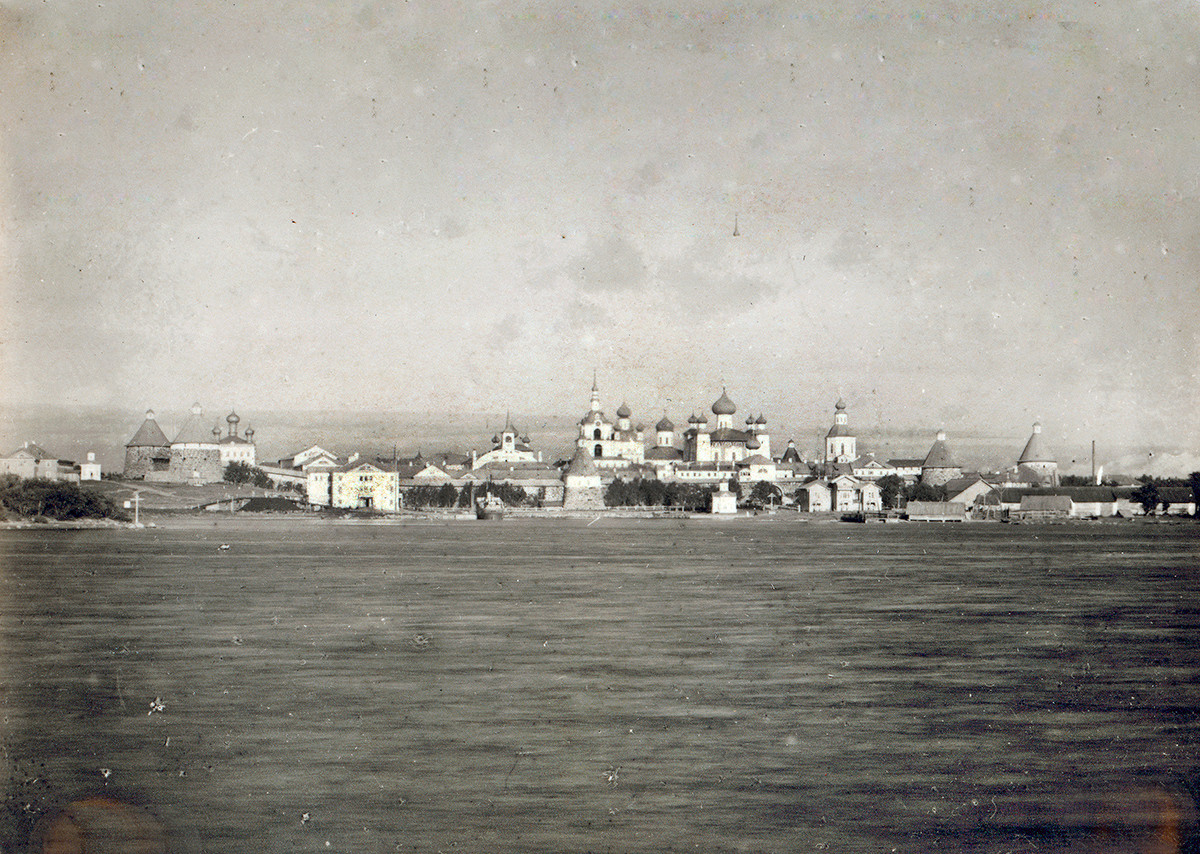 From pilgrimage site to labor camp

After the expropriation of the monastery by the communist regime in 1920, the hotel served as an administrative building for the infamous Solovetsky Labor Camp, Following conversion of the Solovetsky camp to a military base in 1939, the hotel continued to be used for housing and administration until a fire swept through it in 1990. The conserved ruins, shown in my photograph, stand to this day. 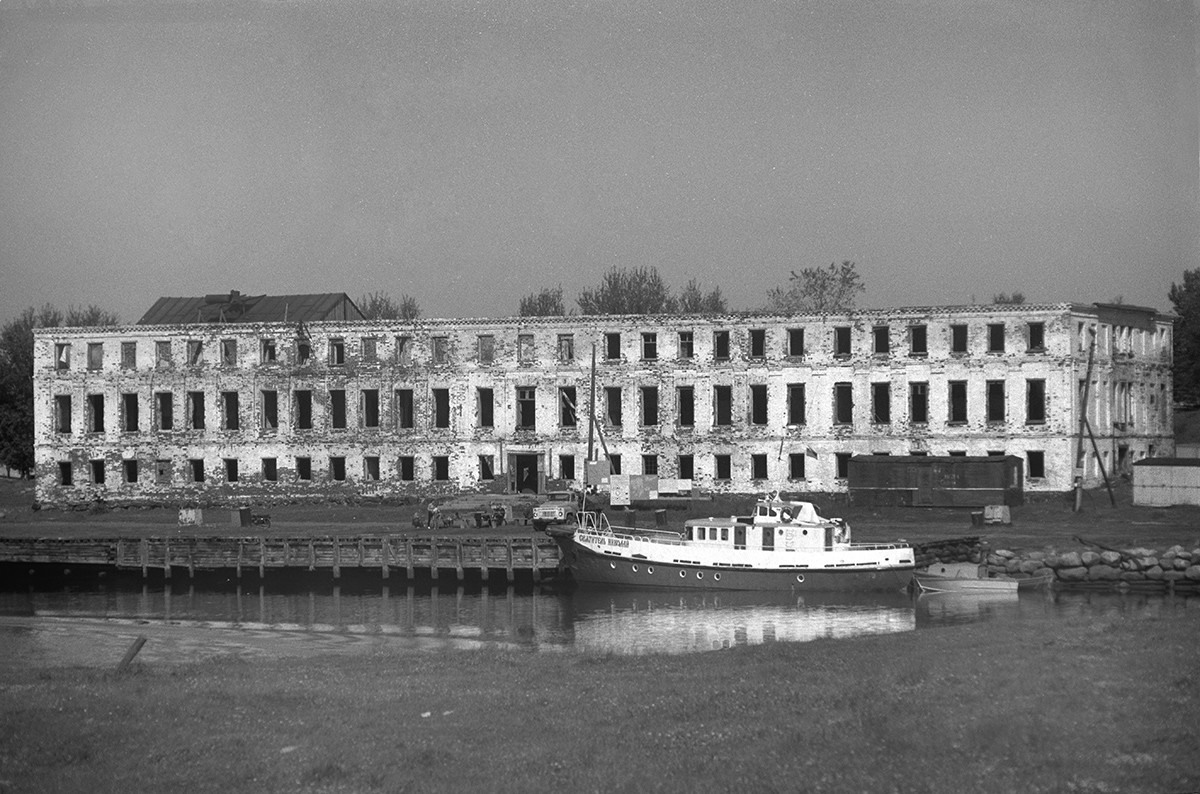 The natural setting also enters Prokudin-Gorsky’s photographs of the canal system on Great Solovetsky Island. Almost 100 square miles in area, the forested island is dotted with over 400 lakes of varying elevations. In order to make use of this abundant fresh water for transportation and other needs, under Philip’s direction in the 16th century, the monastery began to connect several of the larger lakes by means of canals. They in turn fed Holy Lake, the main body of fresh water just to the east of the monastery.

As Prokudin-Gorsky’s photographs show, this process of amelioration continued into the early 20th century. The expanded canal system could even accommodate steam-powered skiffs - testimony to the monastery’s economic enterprise. Although less actively used now, this aquatic network continues to function in the summer months. 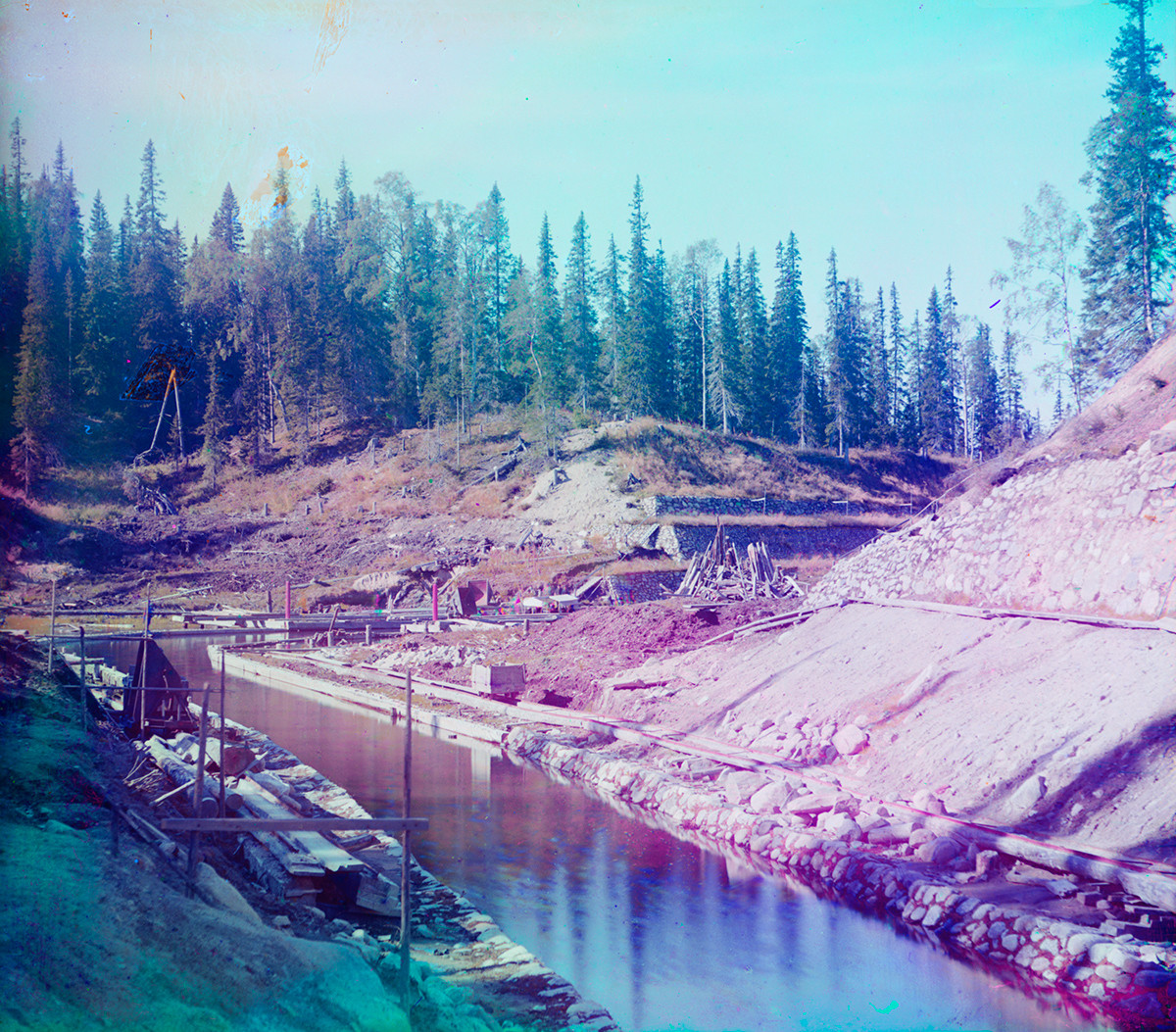 Prokudin-Gorsky’s views of Great Solovetsky Island in 1916 were among the last photographs of this remarkable site before the cataclysm of revolution and civil war. The calm beauty of the natural environment in his 1916 work is all the more poignant in light of subsequent events. During the Soviet period the Solovetsky Islands and the Transfiguration Monastery would bear witness to one of Russian history’s most tragic ordeals, described by Alexander Solzhenitsyn in The Gulag Archipelago. 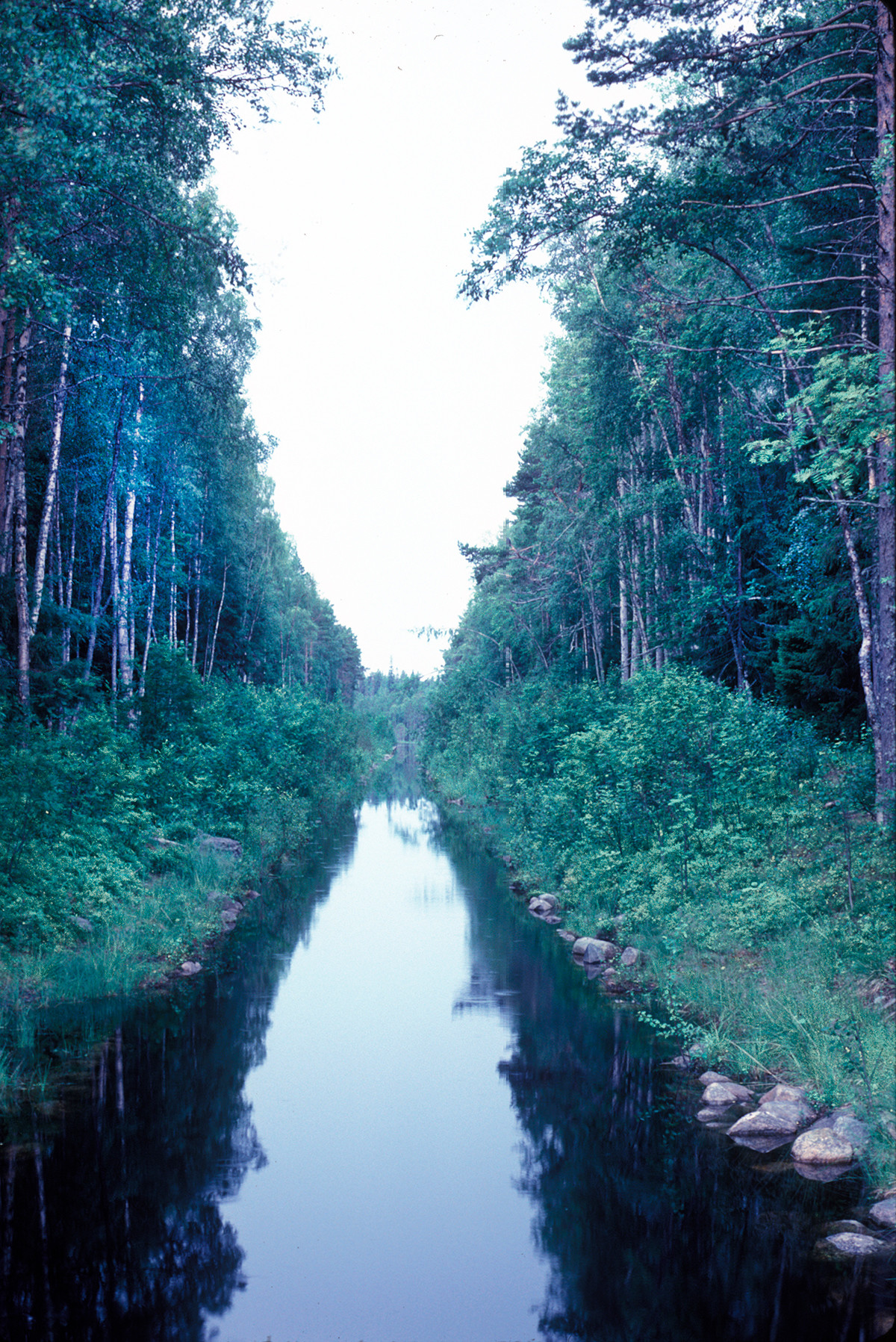 Attempts to restore the Transfiguration Monastery, often with volunteer effort, arose in the 1960s, and by 1990 the monastery began to resume its function as a religious center. In 1992 Patriarch Aleksy, spiritual leader of the Russian Orthodox Church, re-consecrated the relics of the monastery’s founders - Saints Zosima and Savvaty - with solemn ceremony. That same year the Solovetsky Islands were designated a UNESCO World Heritage Site. 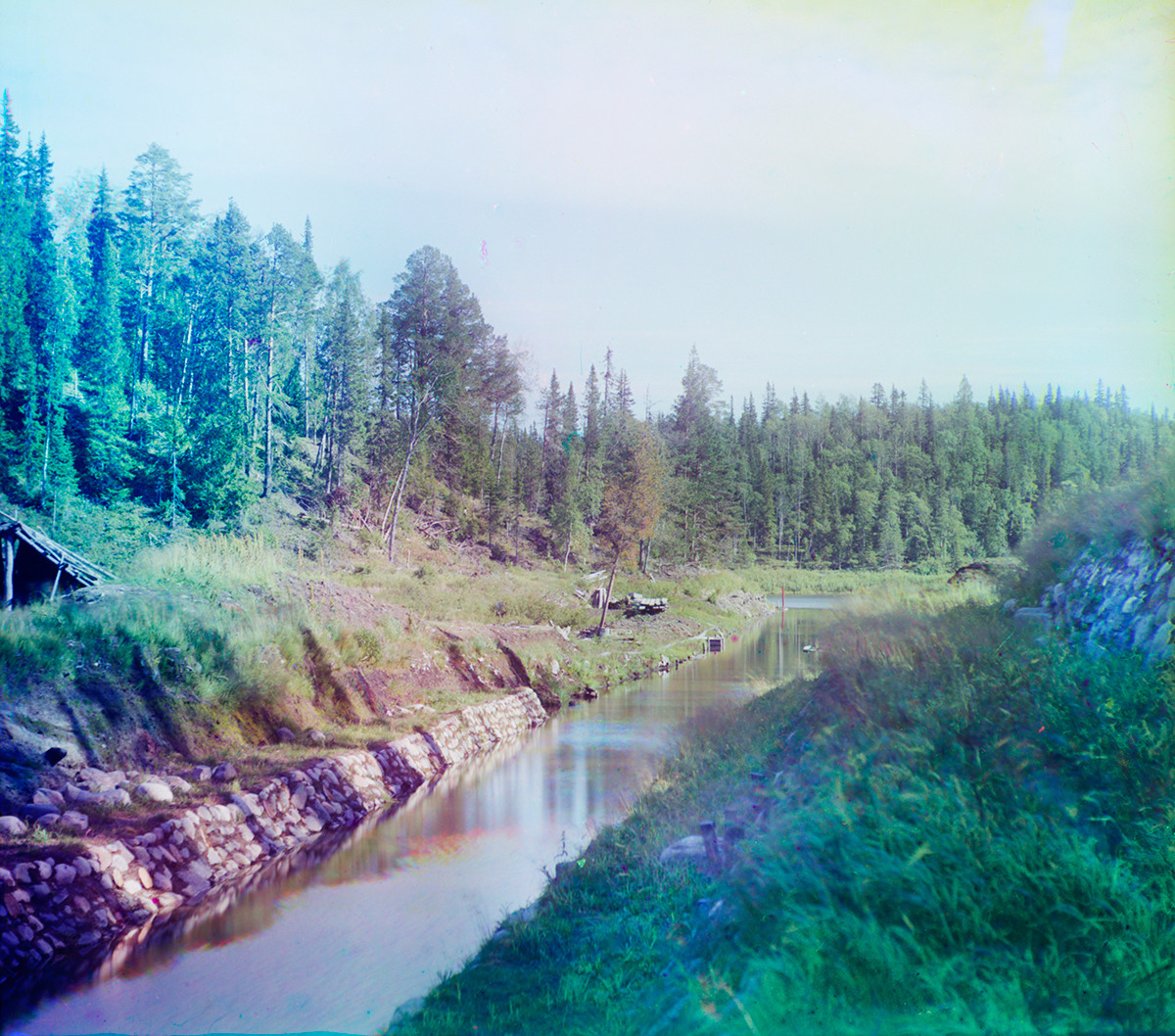 The complex process of restoring and maintaining the unique Transfiguration Monastery ensemble, while preserving the natural environment, demands considerable resources. With the revival of Solovki, so evocatively photographed by Prokudin-Gorsky a century ago, Russia has regained one of its most profound spiritual spaces. 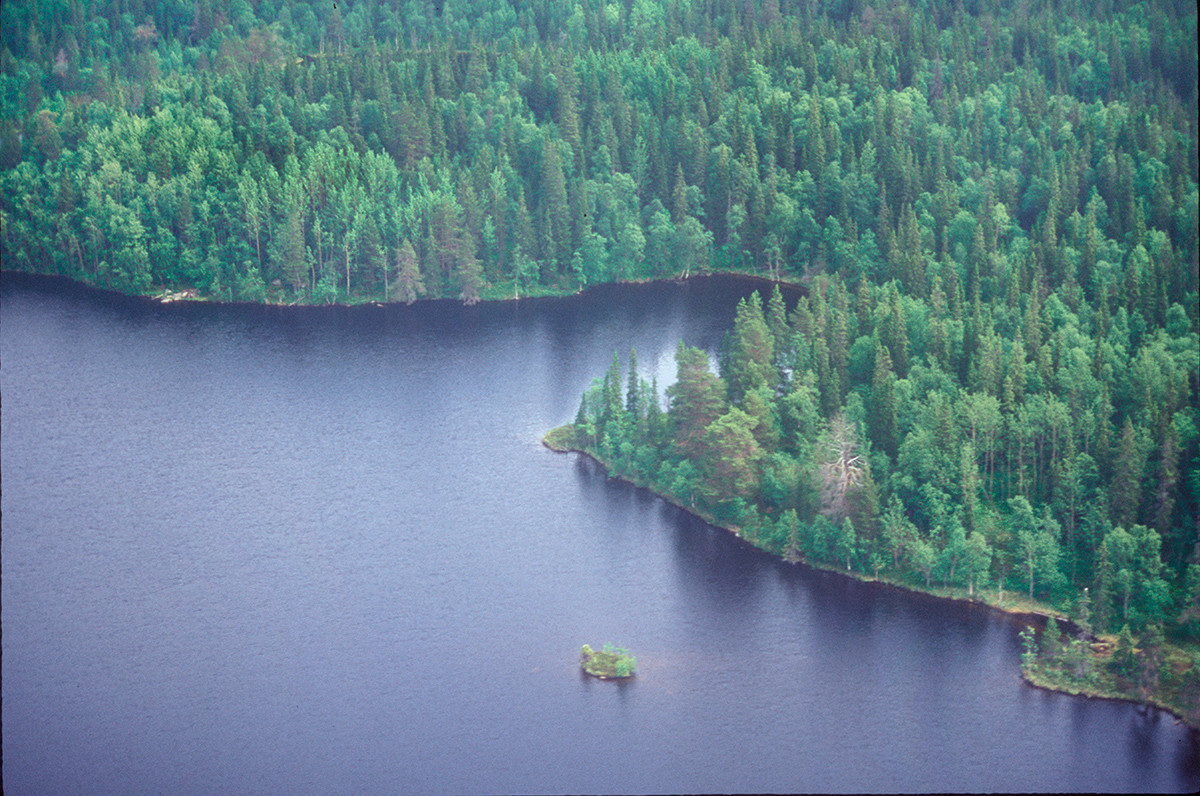 In the early 20th century the Russian photographer Sergei Prokudin-Gorsky developed a complex process for color photography. Between 1903 and 1916 he traveled through the Russian Empire and took over 2,000 photographs with the new process, which involved three exposures on a glass plate. In August 1918 he left Russia with a large part of his collection of glass negatives and ultimately resettled in France. After his death in Paris in 1944, his heirs sold his collection to the Library of Congress. In the early 21st century the Library digitized the Prokudin-Gorsky Collection and made it freely available to the global public. A number of Russian websites now have versions of the collection. In 1986 the architectural historian and photographer William Brumfield organized the first exhibit of Prokudin-Gorsky photographs at the Library of Congress. Over a period of work in Russia beginning in 1970, Brumfield has photographed most of the sites visited by Prokudin-Gorsky. This series of articles will juxtapose Prokudin-Gorsky’s views of architectural monuments with photographs taken by Brumfield decades later.