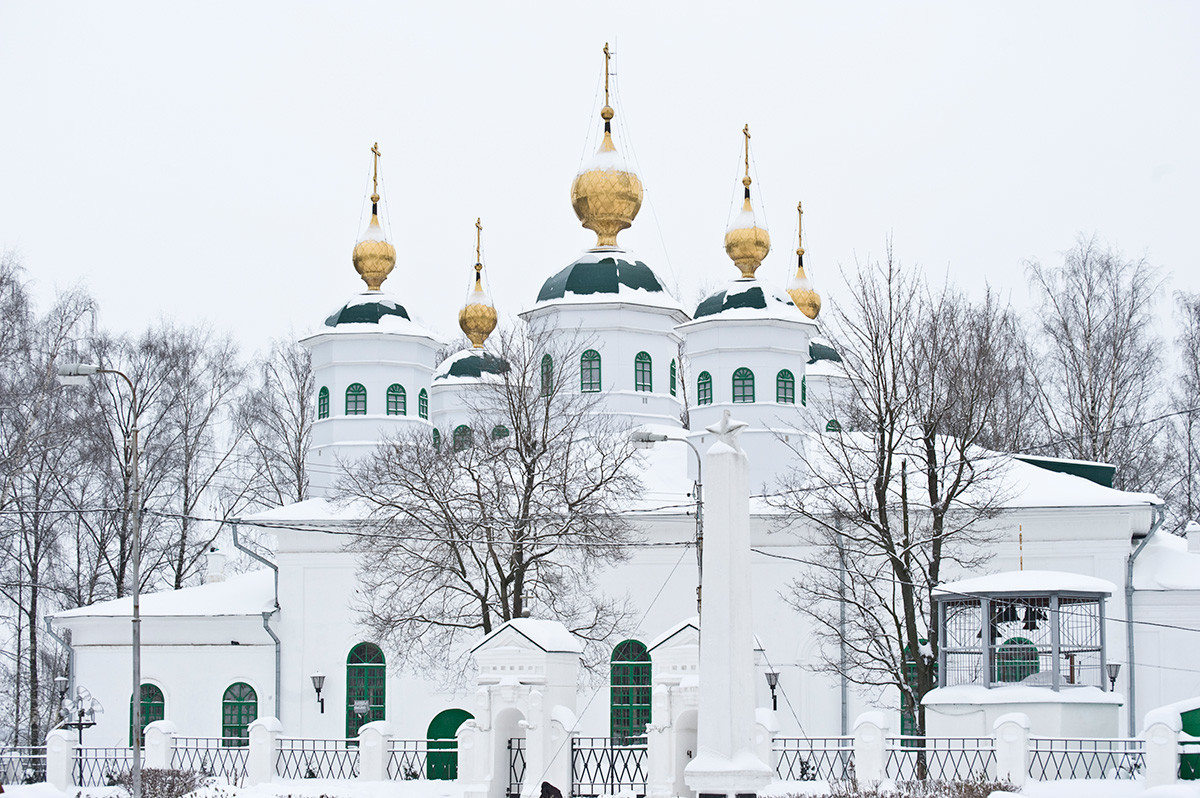 In the early 1700s, faced with the challenge of supplying Russia’s new capital, St. Petersburg, with grain and other commodities from the interior of the country, Peter the Great initiated a transportation network between St. Petersburg and the Volga River basin. This waterway was further developed during the reign of Emperor Paul (1796-1801), who named it the Mariinsky Waterway after his consort, Empress Maria Feodorovna.

The Mariinsky Waterway system extended from the Neva River at St. Petersburg to Lake Ladoga, then via the Svir River to the southern shore of Lake Onega. Beyond Onega, the Vytegra River and canal led via the Kovzha River to White Lake (Beloe ozero). That lake is drained by the Sheksna River, which on its way to the Volga port of Rybinsk flows past what is now the industrial behemoth of Cherepovets. 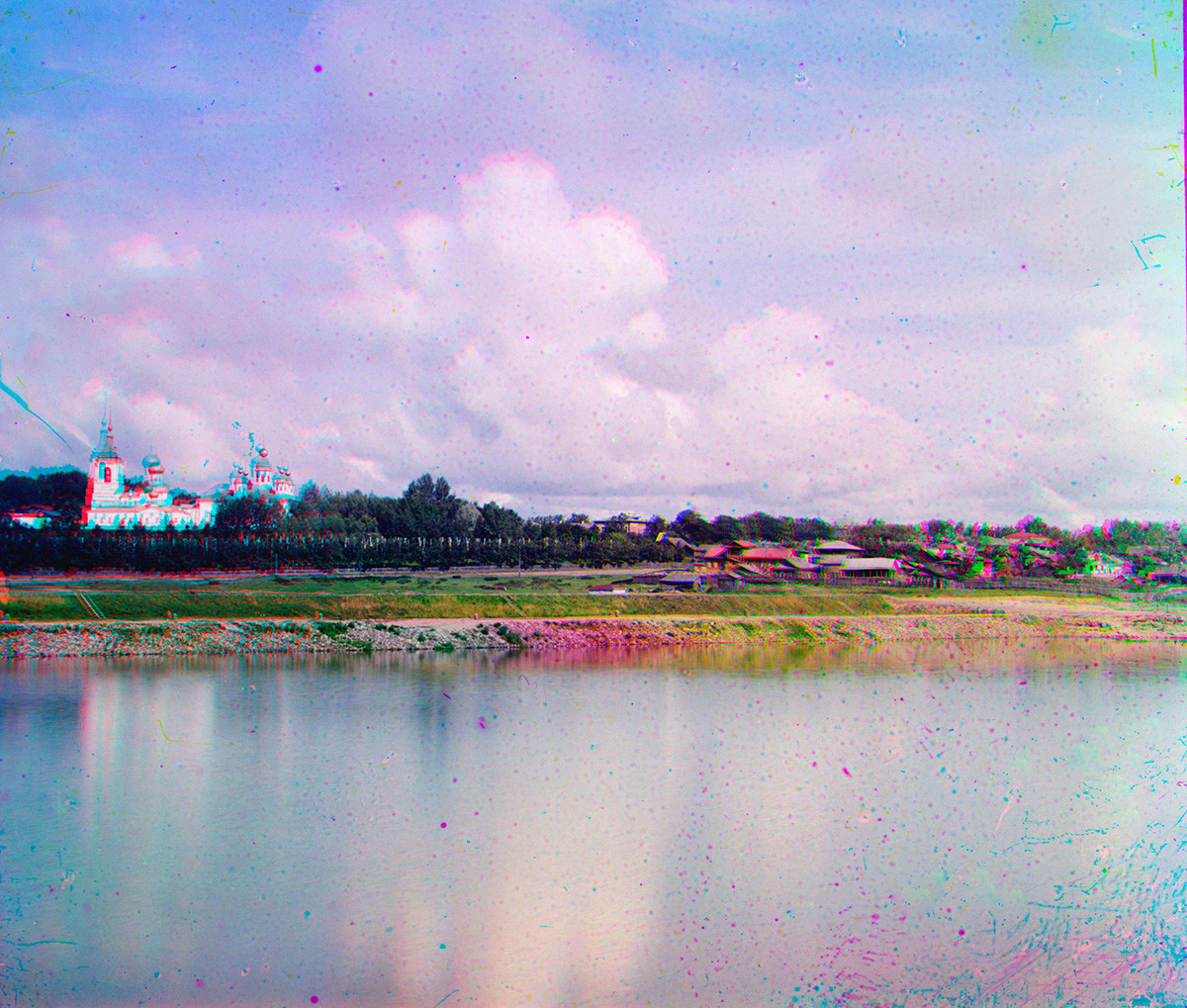 In 1909, the Russian photographer and chemist Sergei Prokudin-Gorsky photographed extensively along the Sheksna River at the request of the Ministry of Transportation. In addition to technical views of dredging operations and hydraulic installations, he also photographed idyllic scenes with peasants during summer harvest when time seemed to have stopped.

Before steel, a religious center 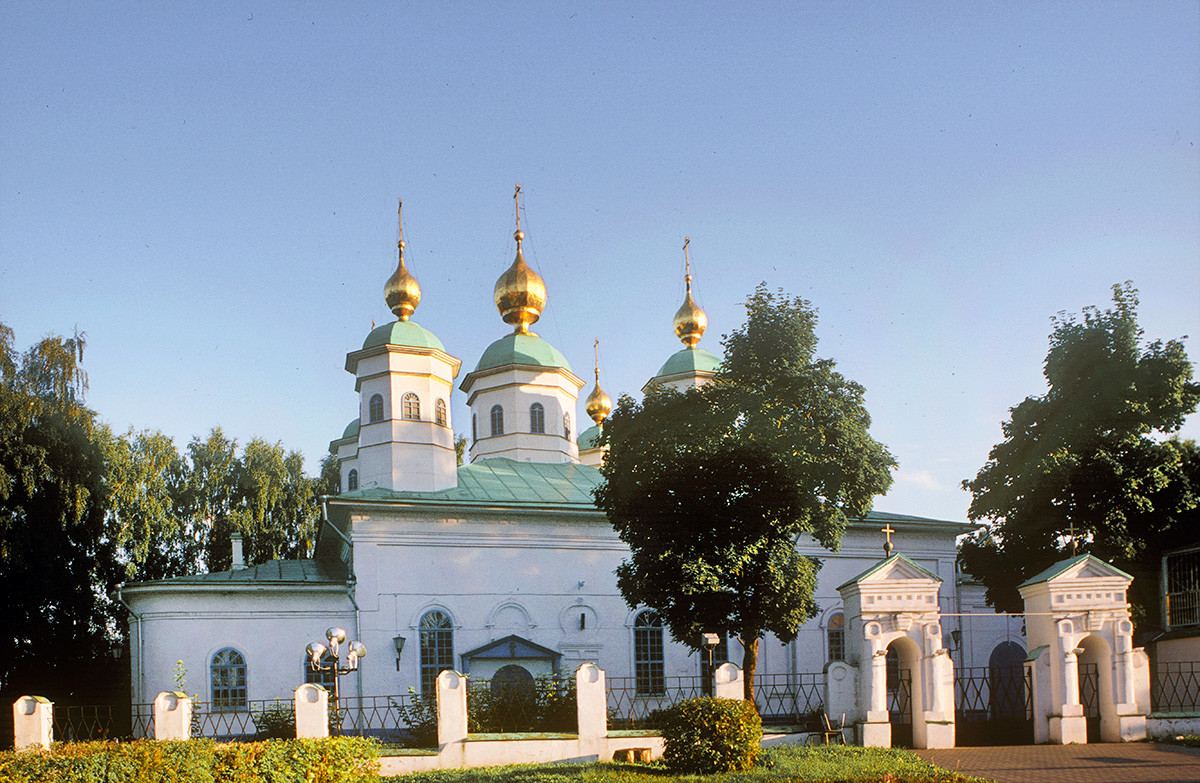 Journeying along the Sheksna eventually brought him to the small town of Cherepovets, which he photographed only from the distant right bank of the river. Nonetheless, his views show important features that remain to this day. 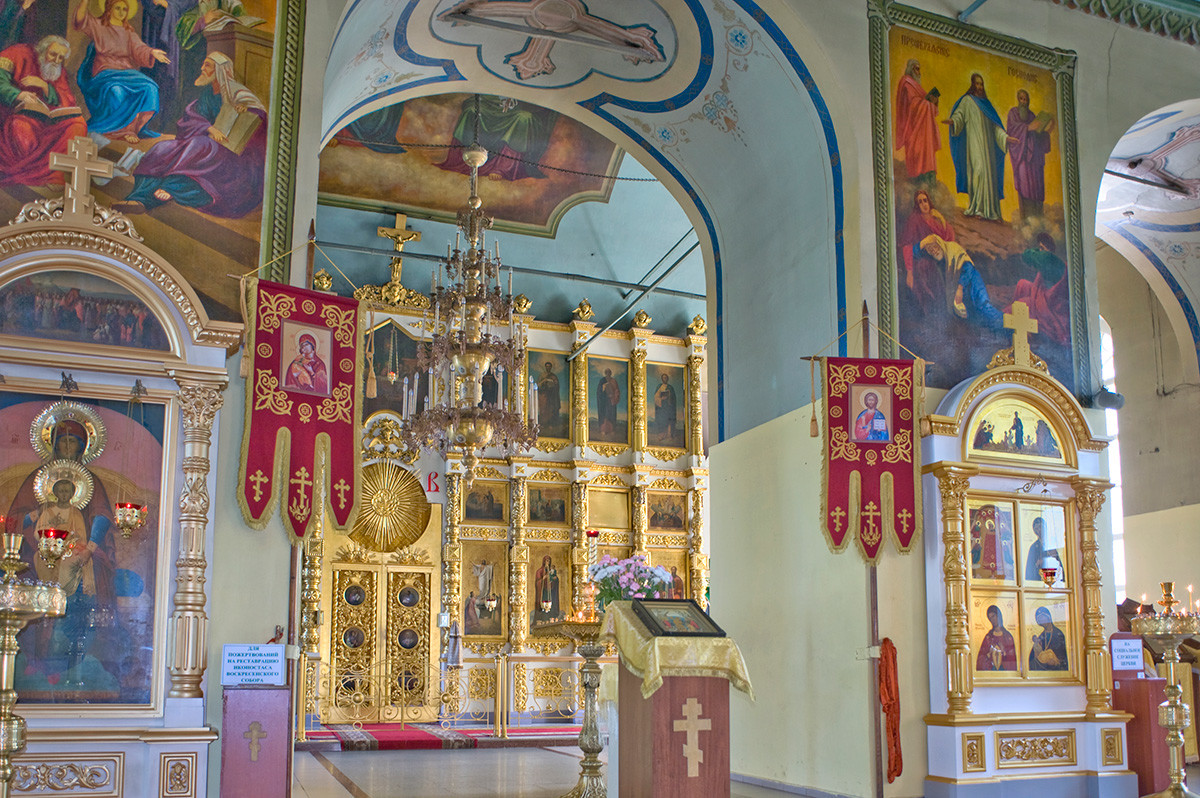 Cathedral of the Resurrection. Interior, view east from vestibule toward icon screen. August 10, 2015.

Situated at the confluence of the Sheksna and Yagorba Rivers in the western part of Vologda Province, Cherepovets is known as the home of Severstal (“NorthSteel”), one of Russia’s largest industrial enterprises. The city now has a population of some 318,000. 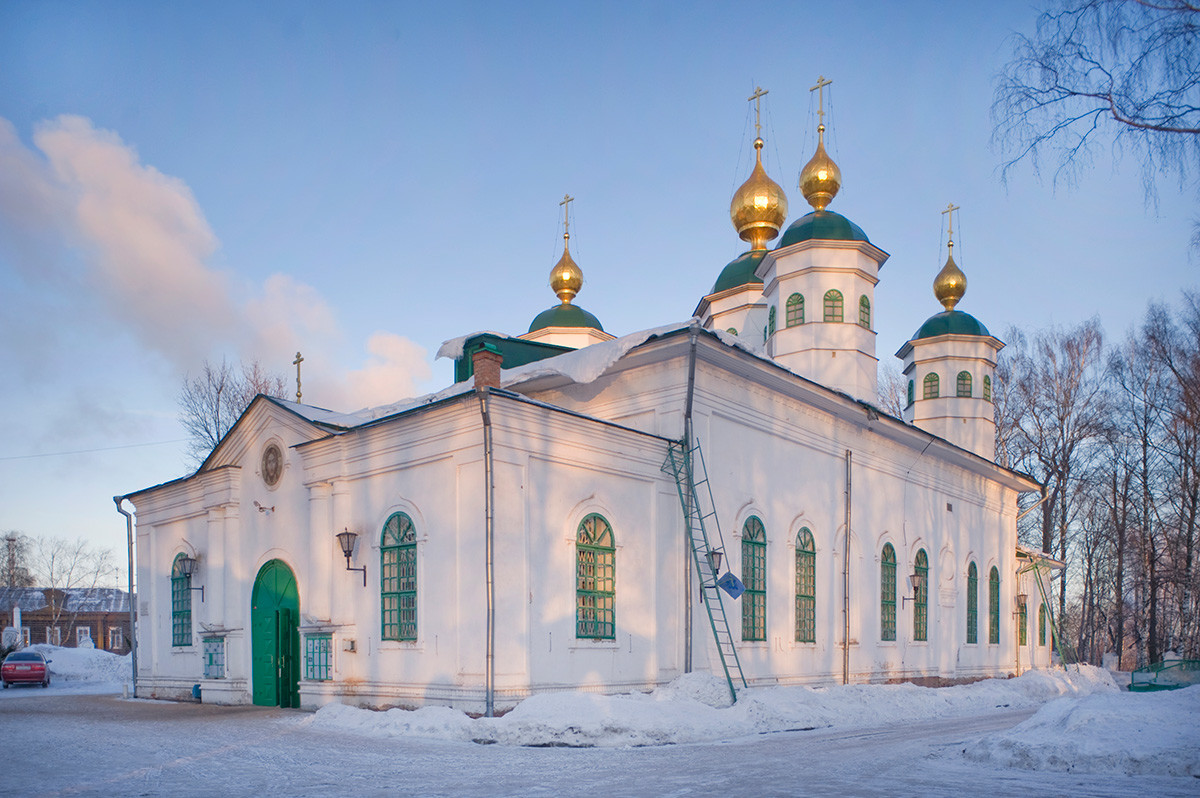 Although this area on the high left bank of the Sheksna was settled by Slavs no later than the 10th century, Cherepovets did not gain formal status until the 1770s. The town’s core arose from the Resurrection Monastery, founded around 1362 by Feodosy and Afanasy (d. 1392), monks from the Trinity-St. Sergius Monastery, the primary center of Muscovite monasticism. 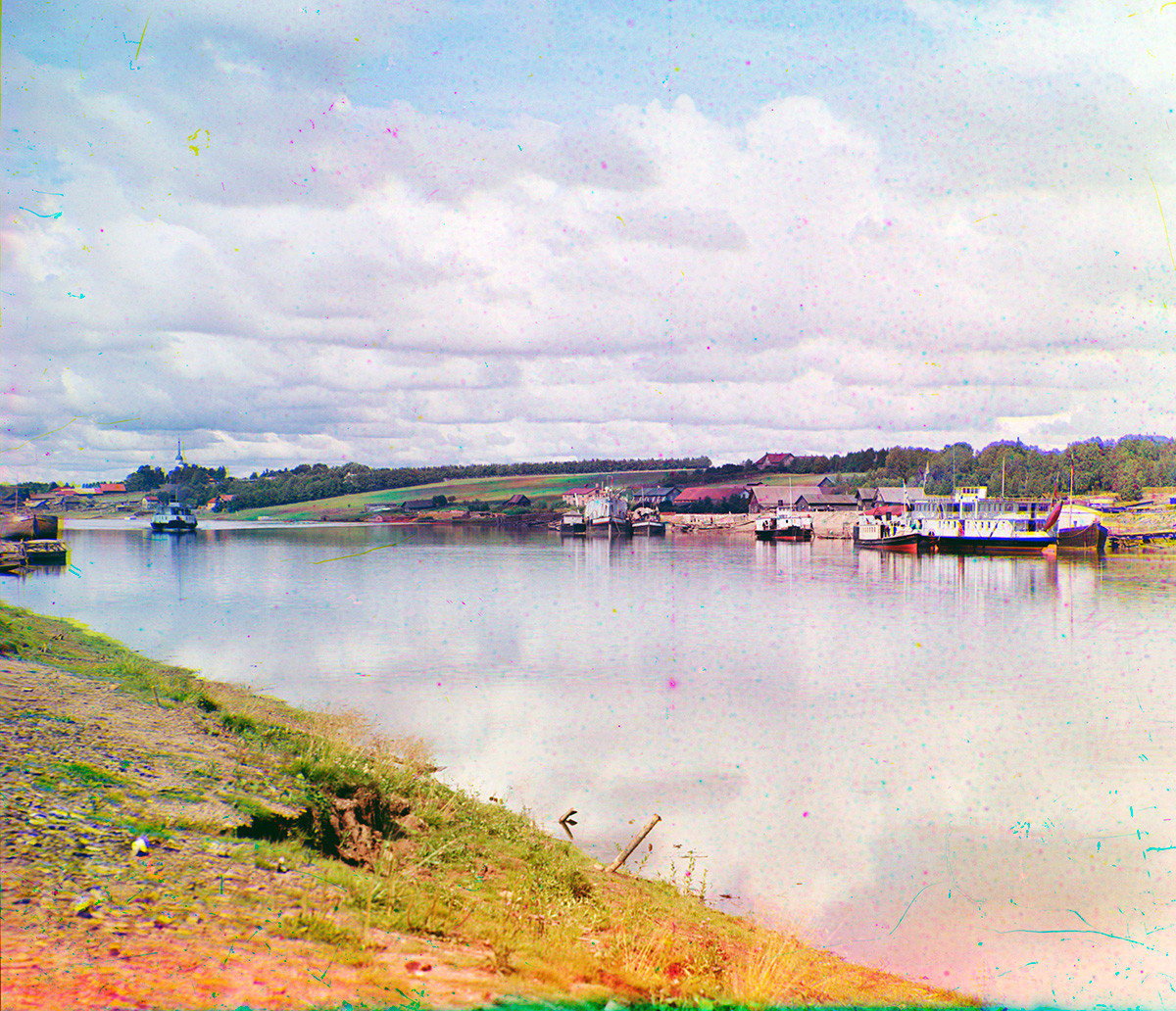 Cherepovets. View toward northwest from right bank of Sheksna River. Left: Church of Nativity of Christ at Rozhdestvenskoe village. Summer 1909.

Built of logs, the monastery was burned in 1610 by Polish-Lithuanian forces during a widespread dynastic and social crisis known as the Time of Troubles. The monastery’s first masonry structure was a rebuilding in 1752-56 of the Resurrection Church (destroyed by lightning in 1713), with two secondary altars dedicated to St John the Divine and to Sts. Feodosy and Afanasy. 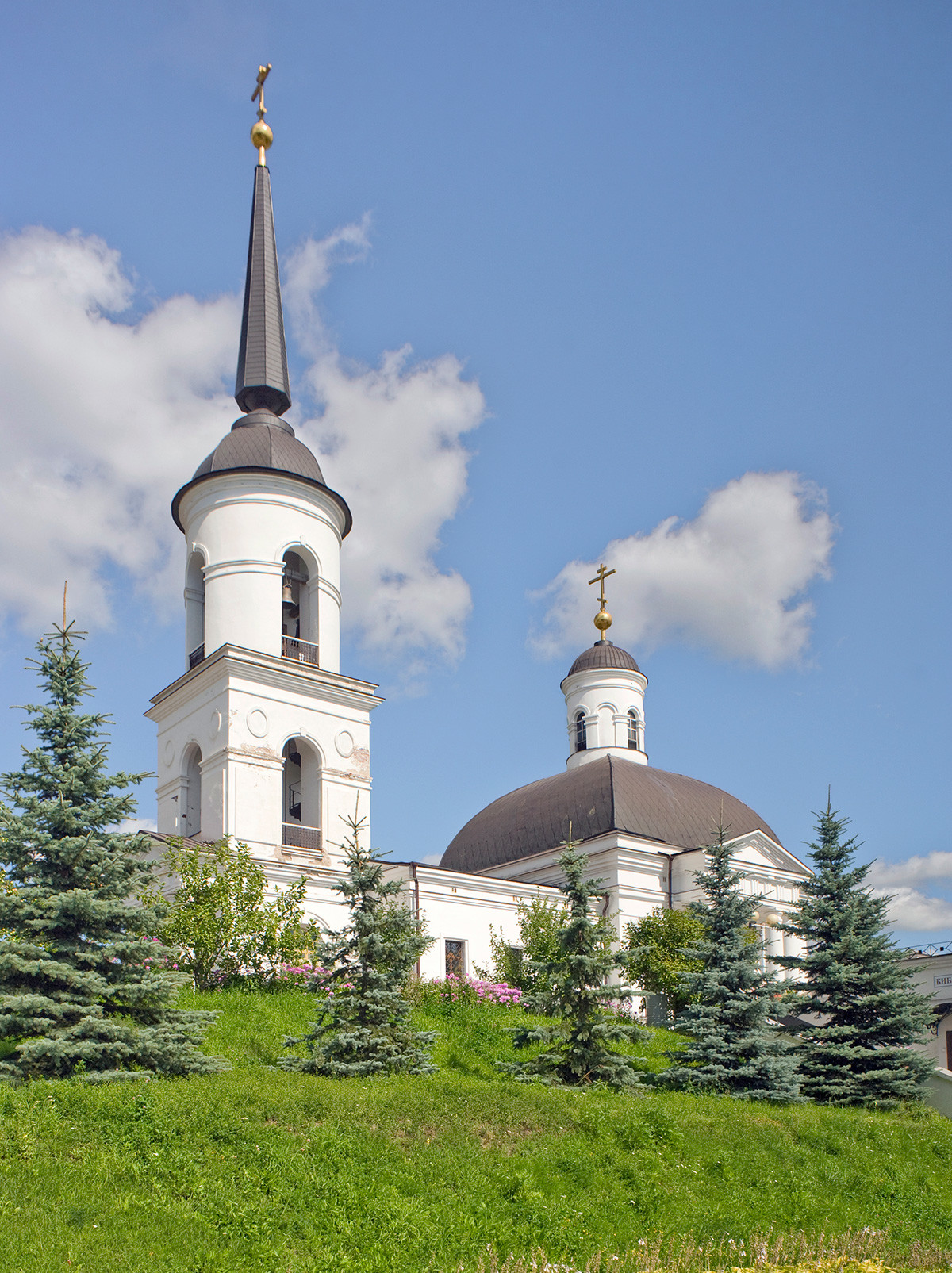 The Resurrection Monastery was closed in 1764 as part of a secularization of monastic holdings by Catherine the Great. Converted to parish use, the church became the Resurrection Cathedral after Cherepovets was granted the status of a town in 1777. As part of Catherine’s efforts to develop provincial centers, Cherepovets gained a formal street plan (1782) anchored by the cathedral overlooking the river. Prokodin-Gorsky’s view clearly shows this dominant position. 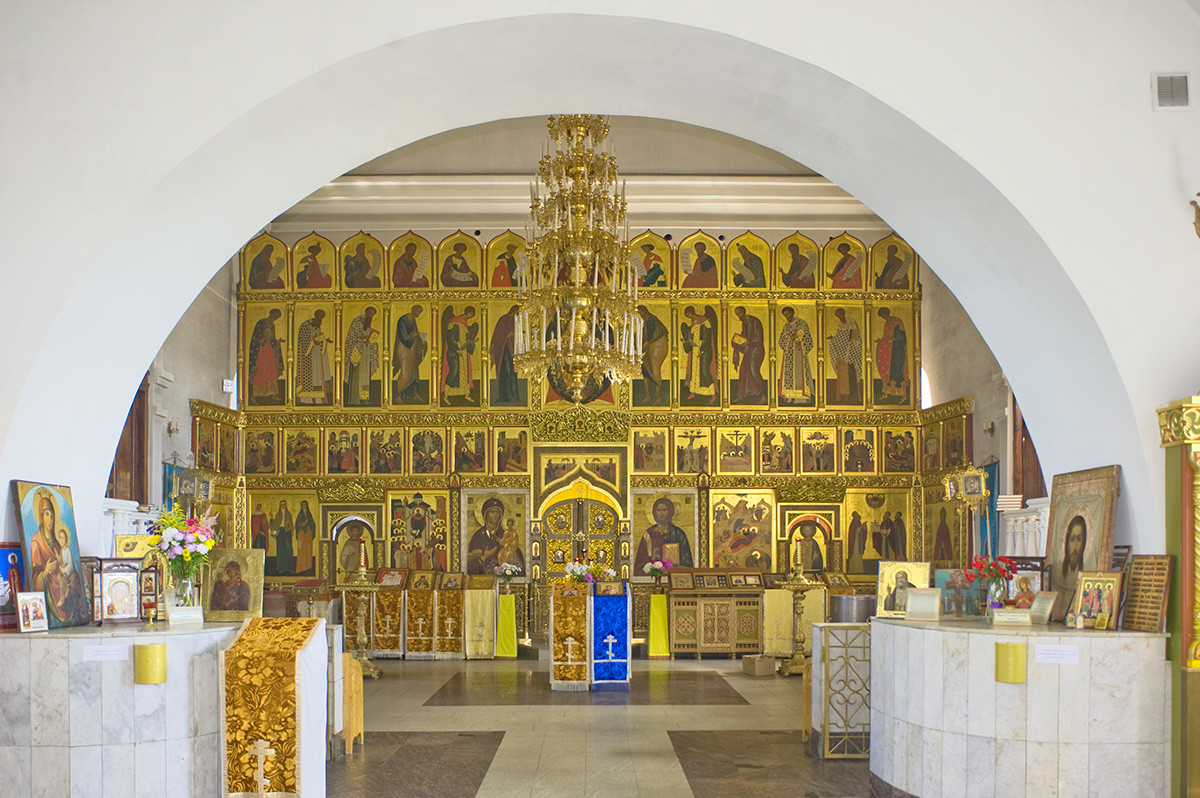 After the cathedral’s closure in 1934, its five decorative cupolas were demolished, but its mid-19th -century wall paintings remained. During the war, the structure housed a repair facility for aircraft engines, but in 1946, it was returned to the official Orthodox Church as the city’s one functioning house of worship. The cupolas were restored in the late 1980s. 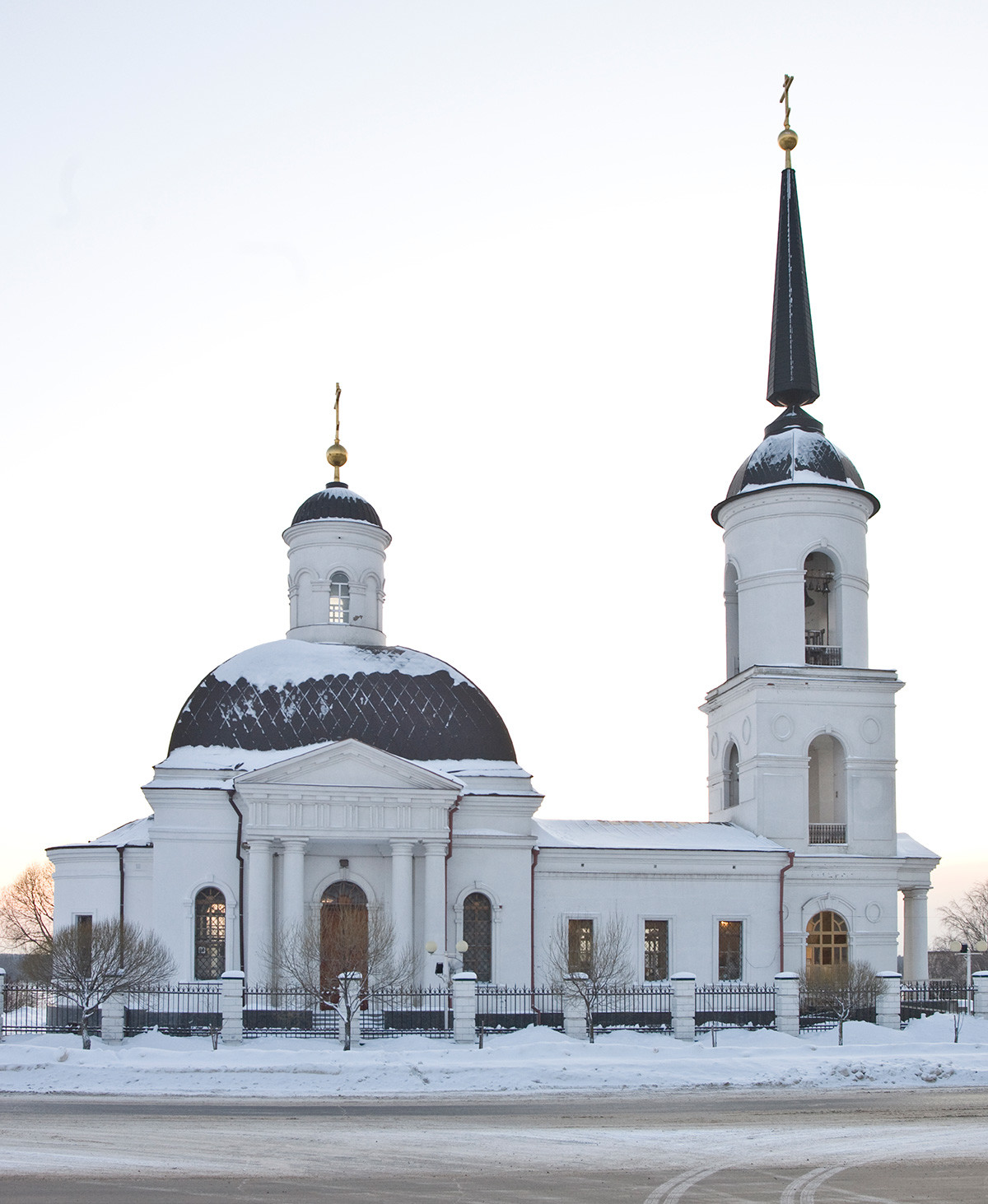 Prokudin-Gorsky also photographed the area just to the north marked by the Church of the Nativity of Christ (1789), built in 1789 in what was then the village of Rozhdestvenskoe (“Nativity”). Its neoclassical form above the river is finely captured in Prokudin-Gorsky’s distant view. 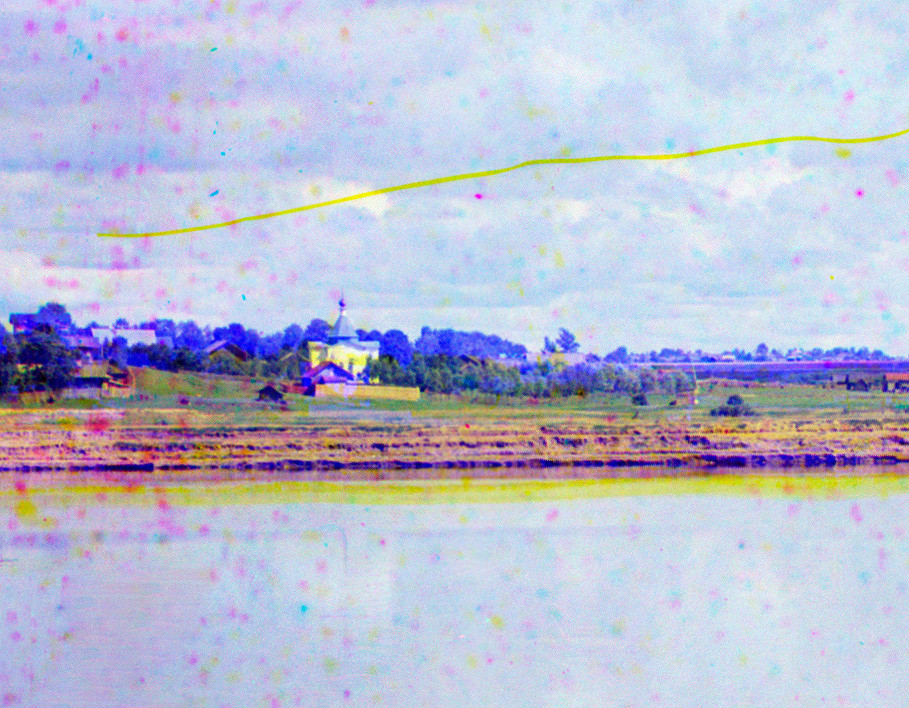 Cherepovets. View toward northeast from right bank of Sheksna River. Center: Chapel of the Icon of the Virgin “the Life-Giving Source”. Summer 1909.

Closed in 1931 and converted to various industrial uses, the Nativity Church fell into disrepair. Its remaining structure was severely damaged by a fire in 1989. Between 1992 and 1997, a revived parish rebuilt the church and bell tower in their original form as seen in my photographs. 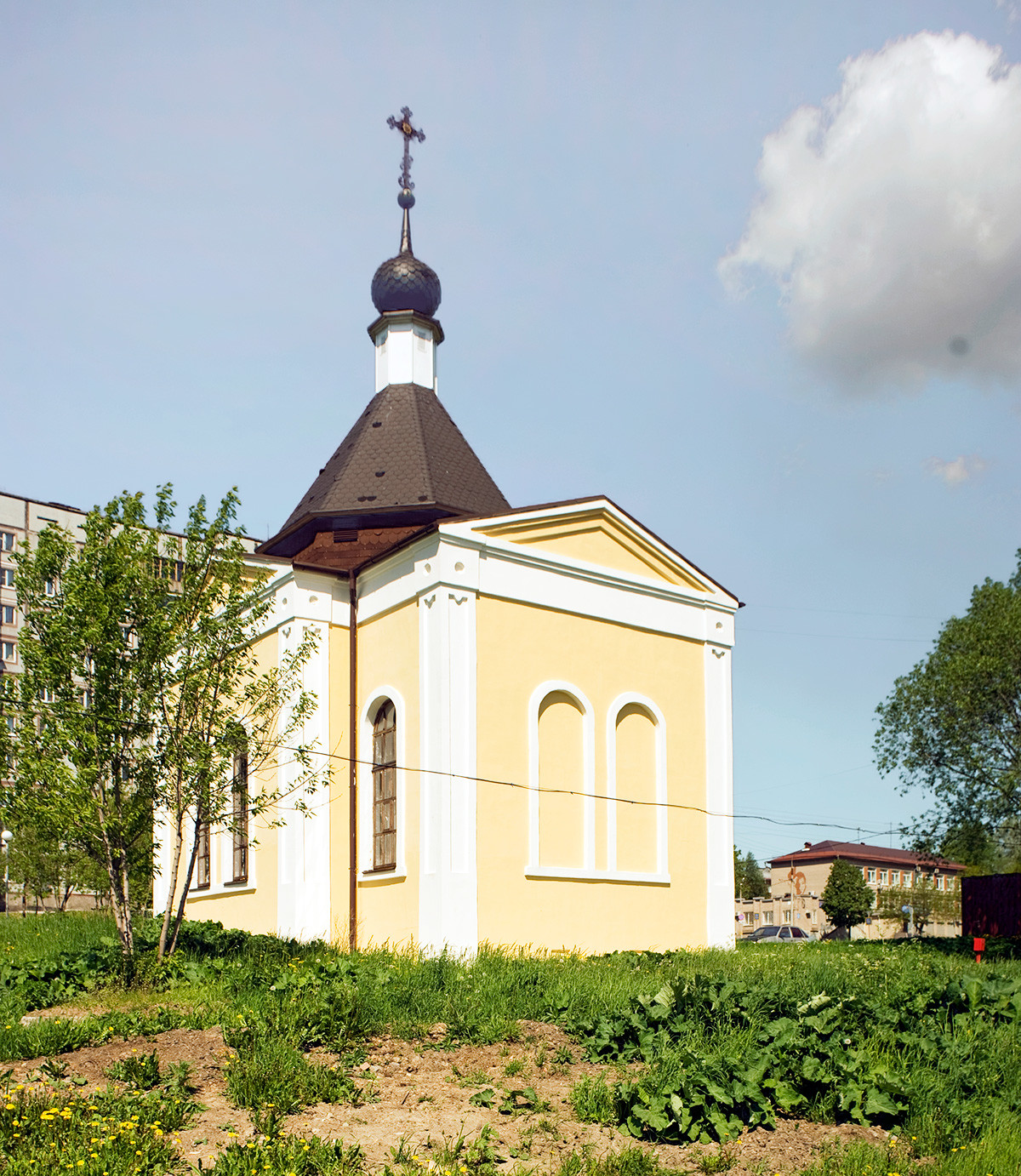 A major stimulus to the growth of Cherepovets occurred with the expansion of the Mariinsky Canal System in 1810. As the main settlement on the long Sheksna portion of the waterway, Cherepovets became a base for boat building and repair in addition to barge hauling. By the middle of the 19th century, its population had more than tripled, to more than 3,000. 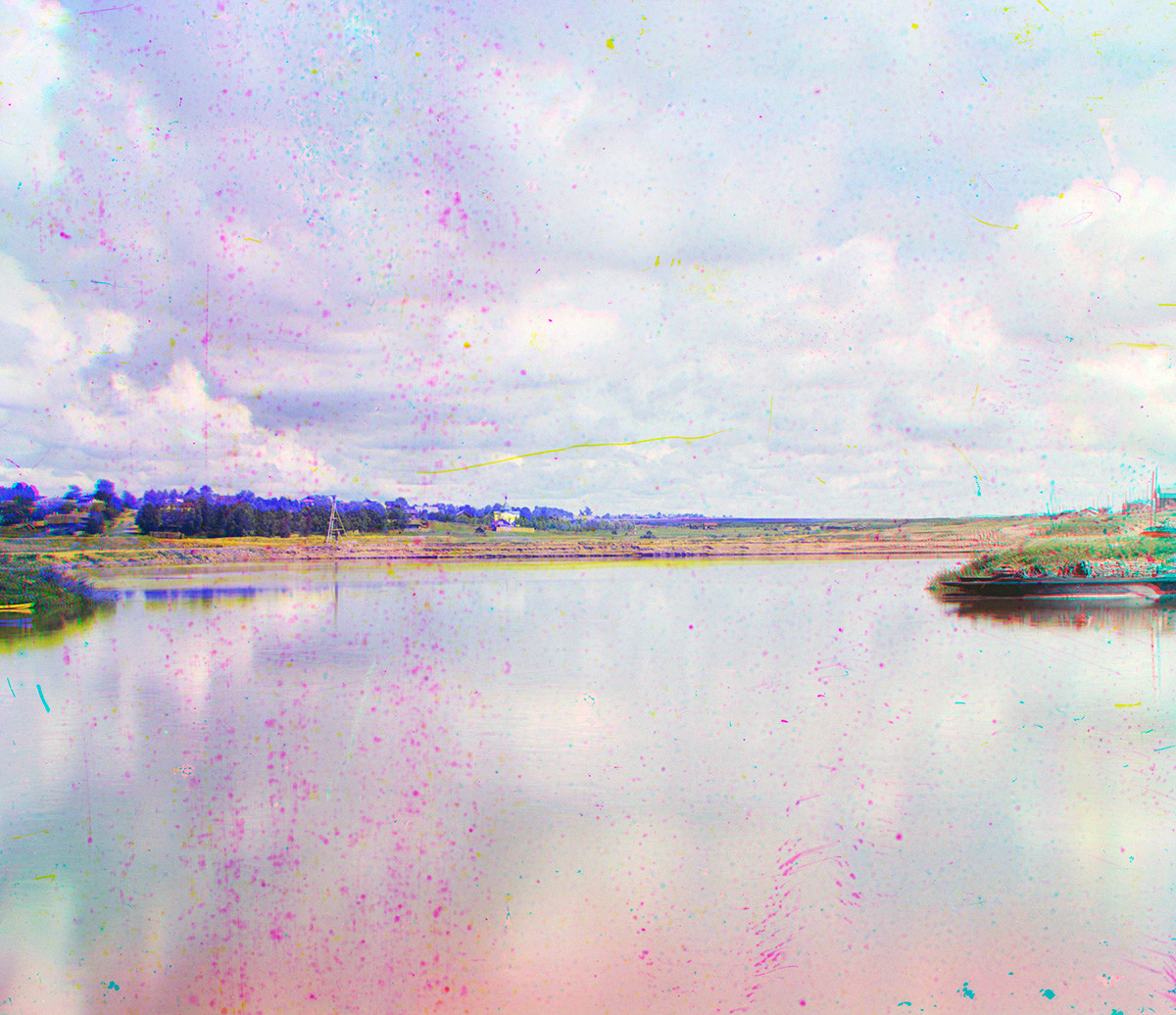 Cherepovets harbor. View toward northeast from right bank of Sheksna. Left: Chapel of the Icon of the Virgin “the Life-Giving Source”. Summer 1909.

After the liberation of the serfs in 1861, Cherepovets benefited from the energetic leadership of Ivan Miliutin, a shipping magnate and industrialist who not only advanced the town’s river facilities but also served as its mayor from 1861 until his death in 1907. Despite having only one year of formal schooling, Miliutin possessed great business acumen. His charitable efforts also endowed the town with several schools and led to major improvements in its infrastructure. The Ivan Miliutin house, originally located behind the treeline in one of Prokudin-Gorsky’s views, has been carefully rebuilt in a park overlooking the confluence of the Yagorba and Sheksna Rivers.

To the south of the town center, Prokudin-Gorsky photographed the broad expanse of the Sheksna harbor, above which rises the Chapel of the Icon of the Virgin “the Life-Giving Source.” Built in the 1880s, the chapel was closed in 1924 and much disfigured during the Soviet period. My photographs show the chapel after its restoration at the beginning of this century.

The bucolic views that Prokudin-Gorsky took in the late summer of 1909 have been transformed by urban development, but Cherepovets has succeeded in preserving landmarks and creating parks along its riverfront. Prokudin-Gorsky’s photographs are all the more valuable for preserving this city’s historical legacy. 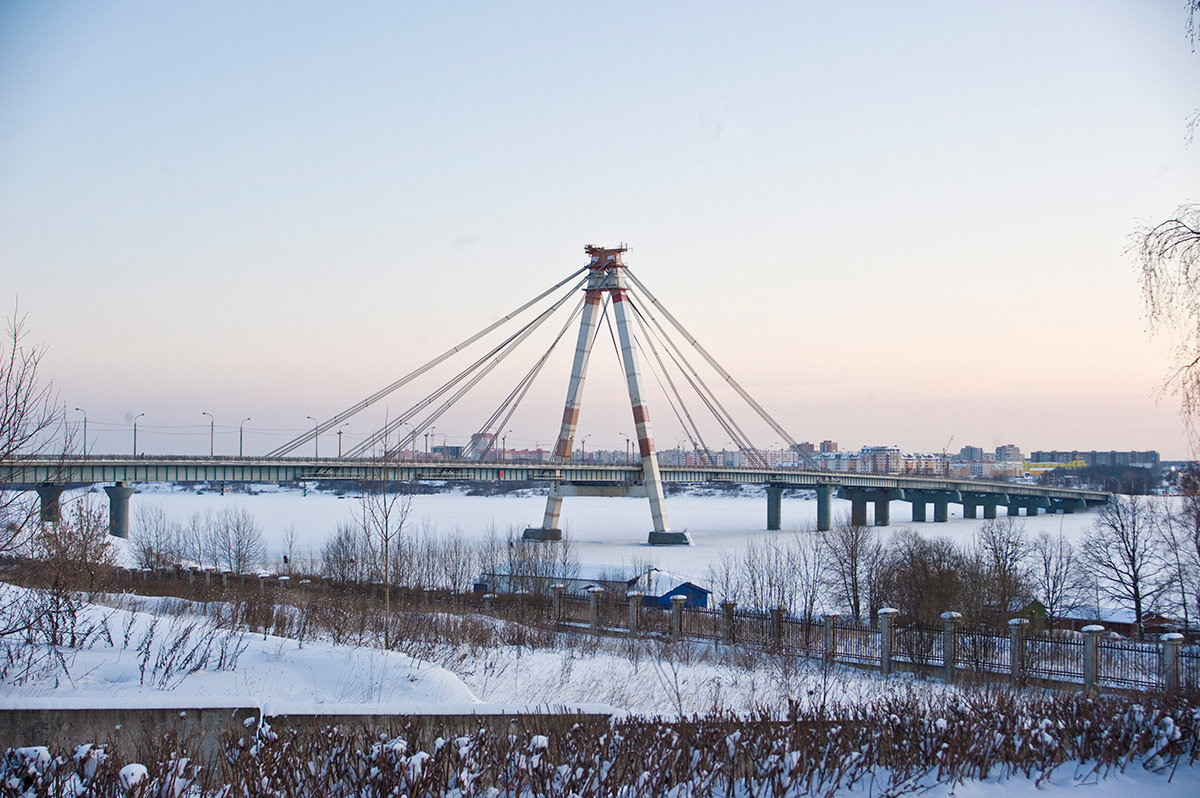