10 things to do in Moscow's Gorky Park 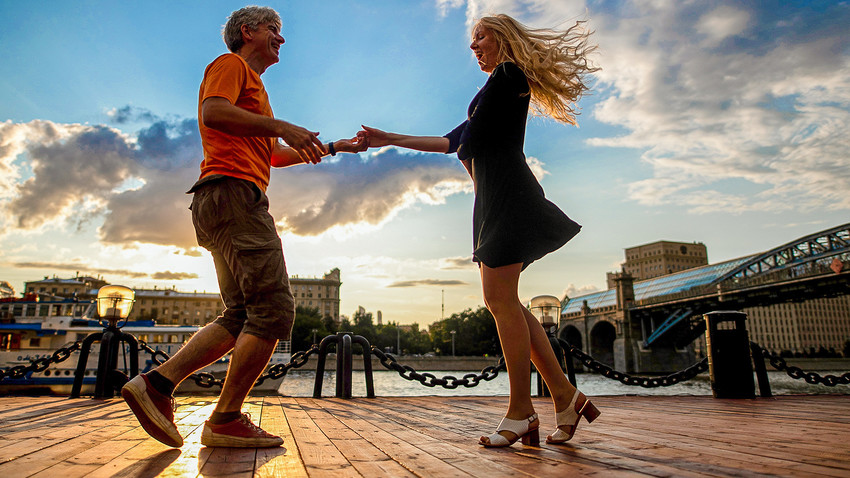 Sergei Bobylev/TASS
Apart from listening to the wind of change, there are lots of things you can do to entertain yourself and spend quality time among the trees and ponds.

Gorky Park is once again one of the most popular walking and leisure places for Muscovites and it’s really busy on weekends. It's definitely one of the must-see sights of Moscow and locals would definitely recommend you visit it at least once. So what to do once you’re in Gorky Park? 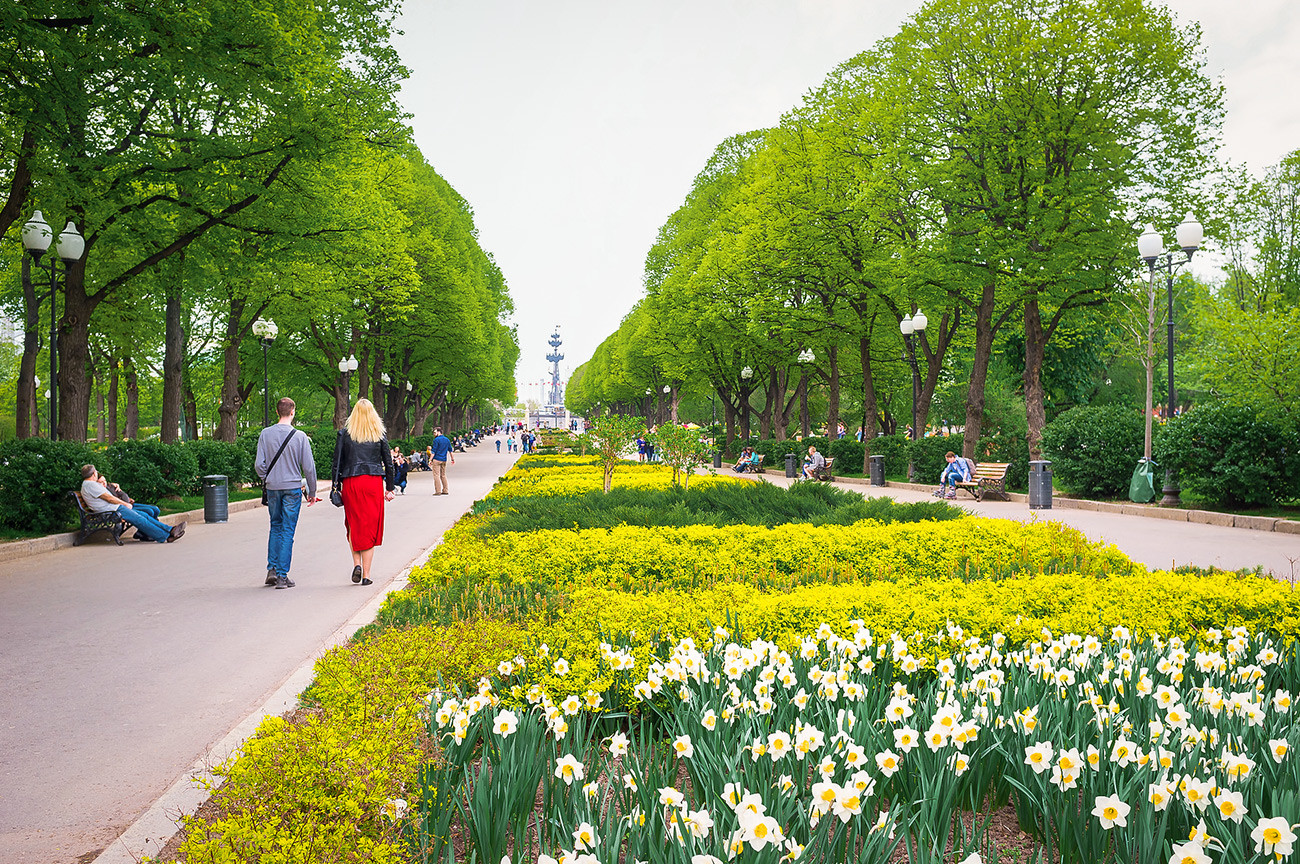 Of course, walking is the main thing to do in any park. Gorky Park offers free entrance 24/7, which, by the way, is a disabled friendly space. The territory of the park is huge and combines several “mini-parks” inside along with a long walking path that lets you follow the Moskva River (just like in Scorpions' song!) and enjoy the river views and tour boats. At the same time, you can head deeper inside the park and take a stroll along its multiple paths.

And if you are ready for a longer walk to improve those results on your step tracker - take a stroll along the river from Muzeon Park through Gorky Park, and then Neskuchny Sad (literally “Not Boring Garden”), finishing at Vorobyovy Gory (“Sparrow Hills”). By the way, don’t worry about having to turn back after a long walk, because there are metro stations on either side of the park: ‘Park Kultury’ or ‘Okrtyabrskaya’ at one end and ‘Vorobyovy Gory’ at the other. 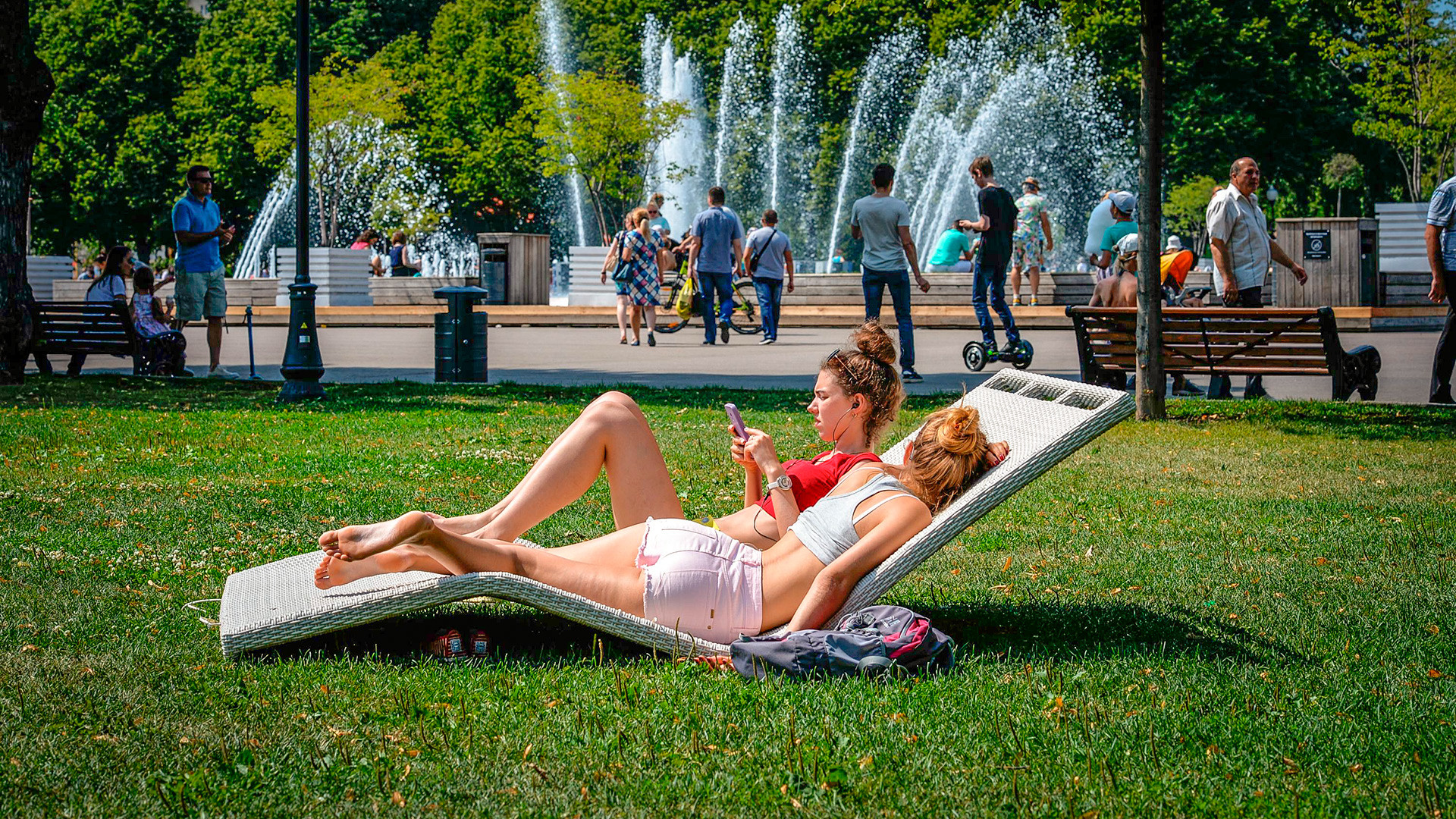 Moscow nowadays is more and more reminiscent of a city of the future, as it has every imaginable service working 24/7, an app for everything you could need, and free WI-FI just about everywhere, including Gorky Park.

So why not take advantage of it by downloading an audio guide explaining you the history of Gorky Park during WWII, for instance, and add some additional educational value to your walk!

3. Rent a bike or do other sports 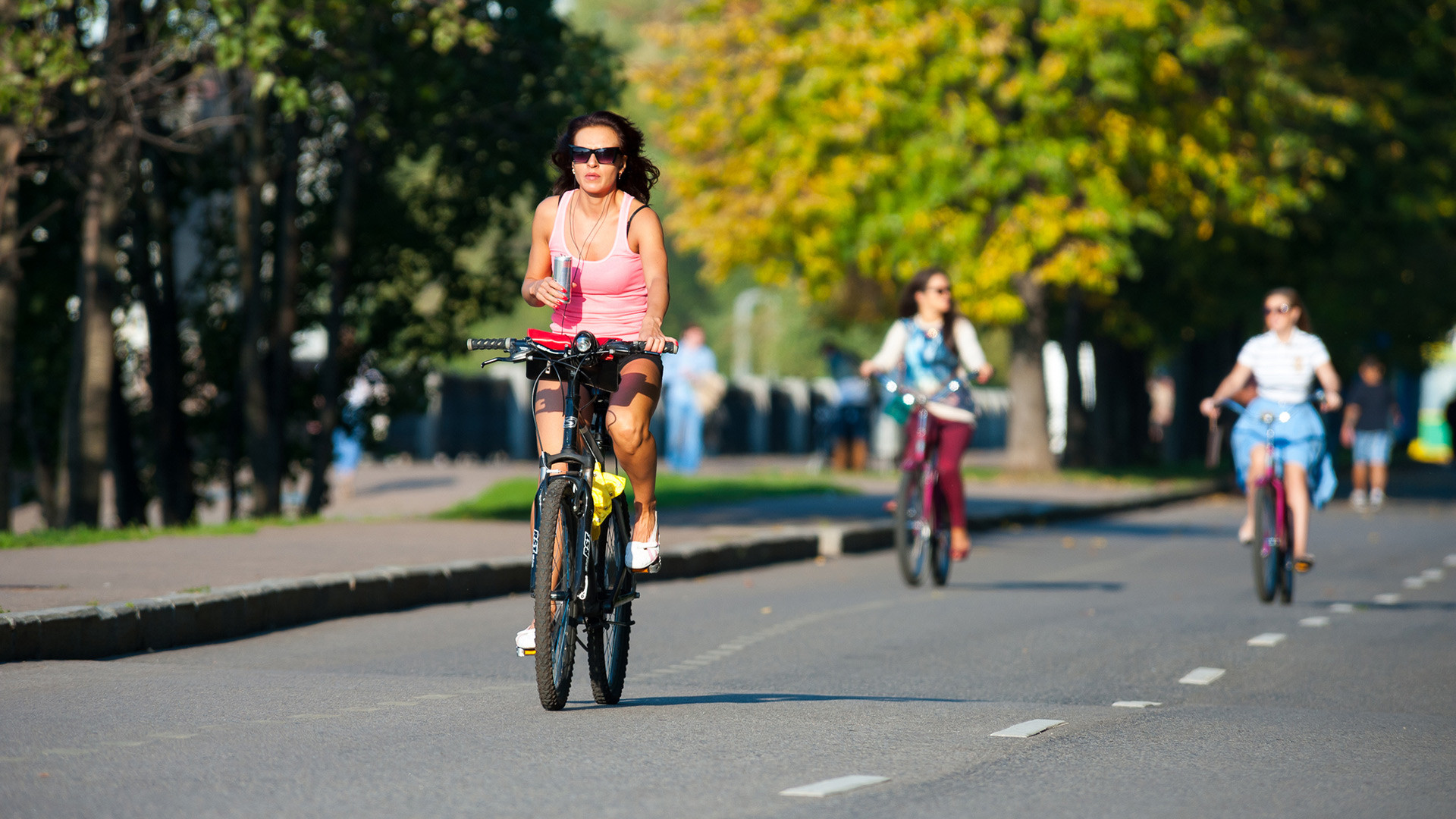 There is a long bike track that stretches along the Moskva River within Gorky Park and beyond. You can rent a bike, longboard, skateboard (or even a children’s buggy). You can download a handy cycle audio guide that can help you explore the territory better, with interesting facts about ponds, museums and the park’s many other attractions.

Gorky Park also offers lots of opportunities for other sports. There is an official Nike base that frequently arranges running clubs and workouts. There are also several playgrounds for football, basketball, as well as an extreme skate park.

Surprisingly or not, you can also play petanque (boules) in Gorky Park. This game popular among retired French people became popular among hipsters, thanks to the former ‘La Boule’ cafe that set up a few lanes back in 2011 (another cafe has since opened at the same place called Cochonnet - Petanque & Fun Cafe). 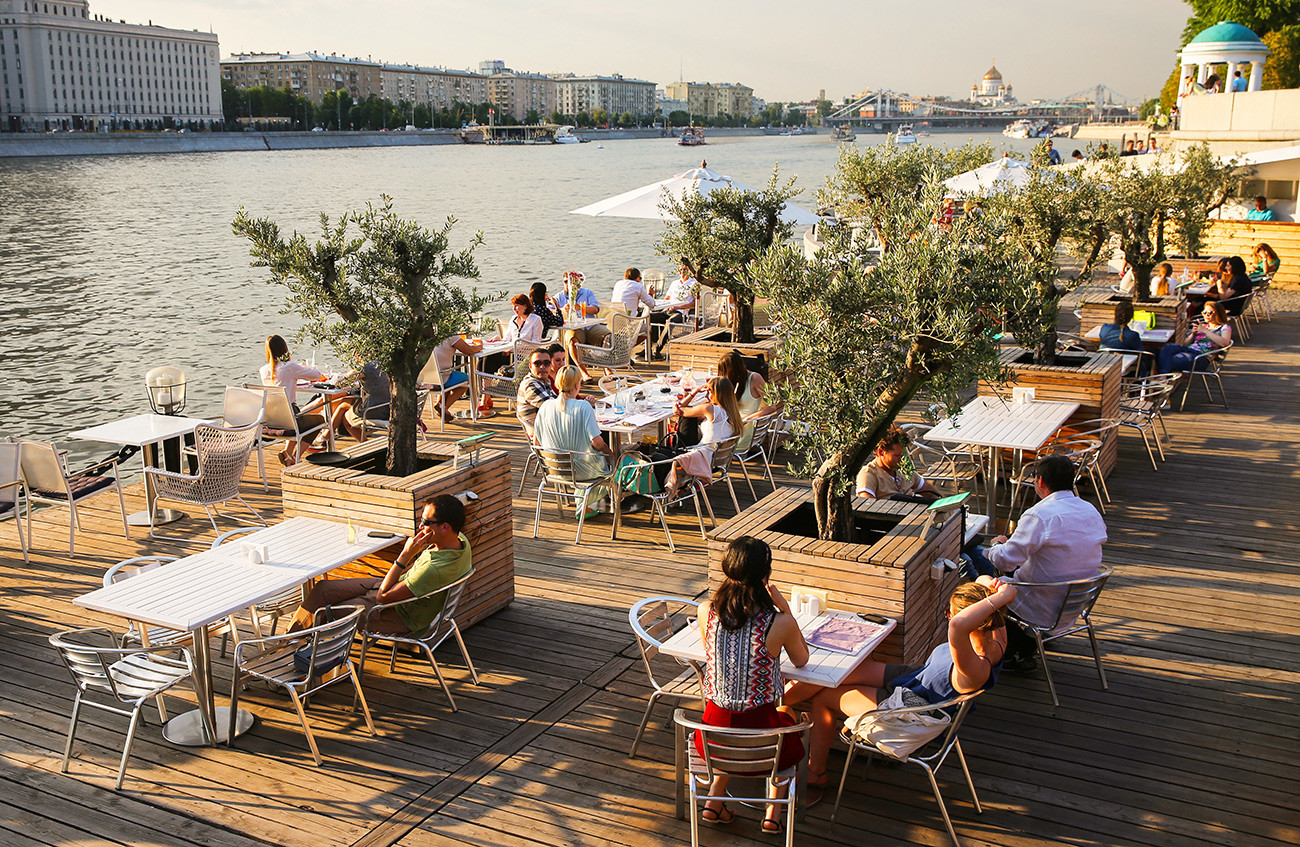 Gorky Park these days has loads of food venues for any taste, from historical Soviet ice cream to modern street food, as well as plenty of sitdown restaurants. Try Greek Gyros, Vietnamiese ‘Bo’ street food, or just grab a coffee and croissant to go anywhere.

If you’d like to have dinner, choose a place with a view near one of the park’s ponds. You can find a grill restaurant called ‘Zharovnya’ next to the main entrance and Pioneer Pond or one of the many nice restaurants next to Golitsyn Pond: ‘Ostrovok’, ‘Pizzamento’, ‘Lebedinoye Ozero’ (literally “Swan Lake”) and others. 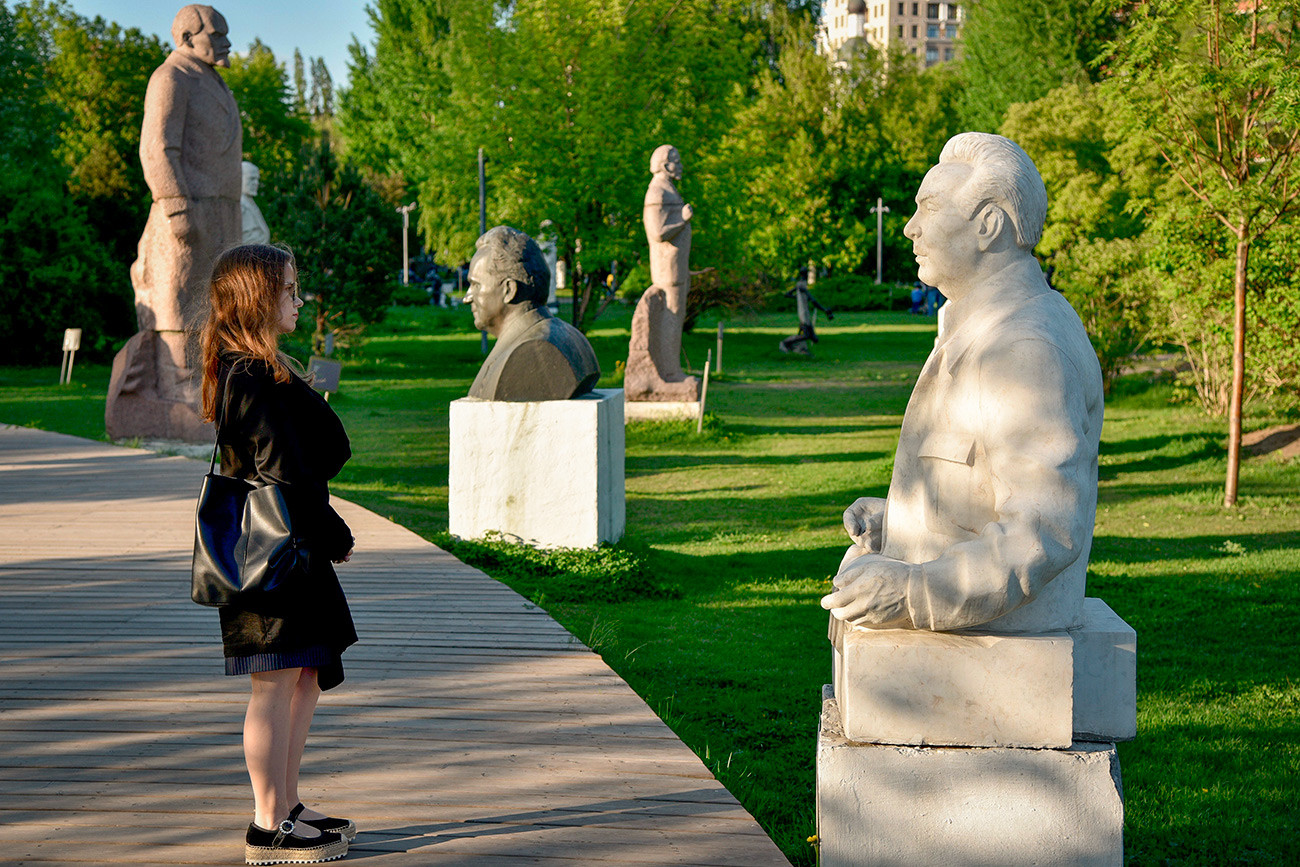 Gorky Park’s full title is ‘Central Park of Culture and Leisure named after Maksim Gorky’. It opened in 1928 and since 1932 has been named after the famous Soviet writer Maxim Gorky. The place was considered to be the main leisure area for citizens of the capital, and so, was arguably designed by the best architects. One just has to take a look at the magnificent entrance arch! (inside it you can find the Museum of Gorky Park history, while on top is an observation deck).

These days, it’s a modern and stylish park (reconstructed in 2011), but little interesting pockets of Soviet past can be found everywhere still. The park offers guided historical tours and other similar types of so-called “edutainment”. (check the events schedule on the park’s website). If you head over to the adjacent park - Muzeon Park, you’ll find some nice sightseeing there - even a cemetery of old Soviet statues and busts, including ones of Lenin and Stalin, that were “sent to exile” here after the USSR collapsed. 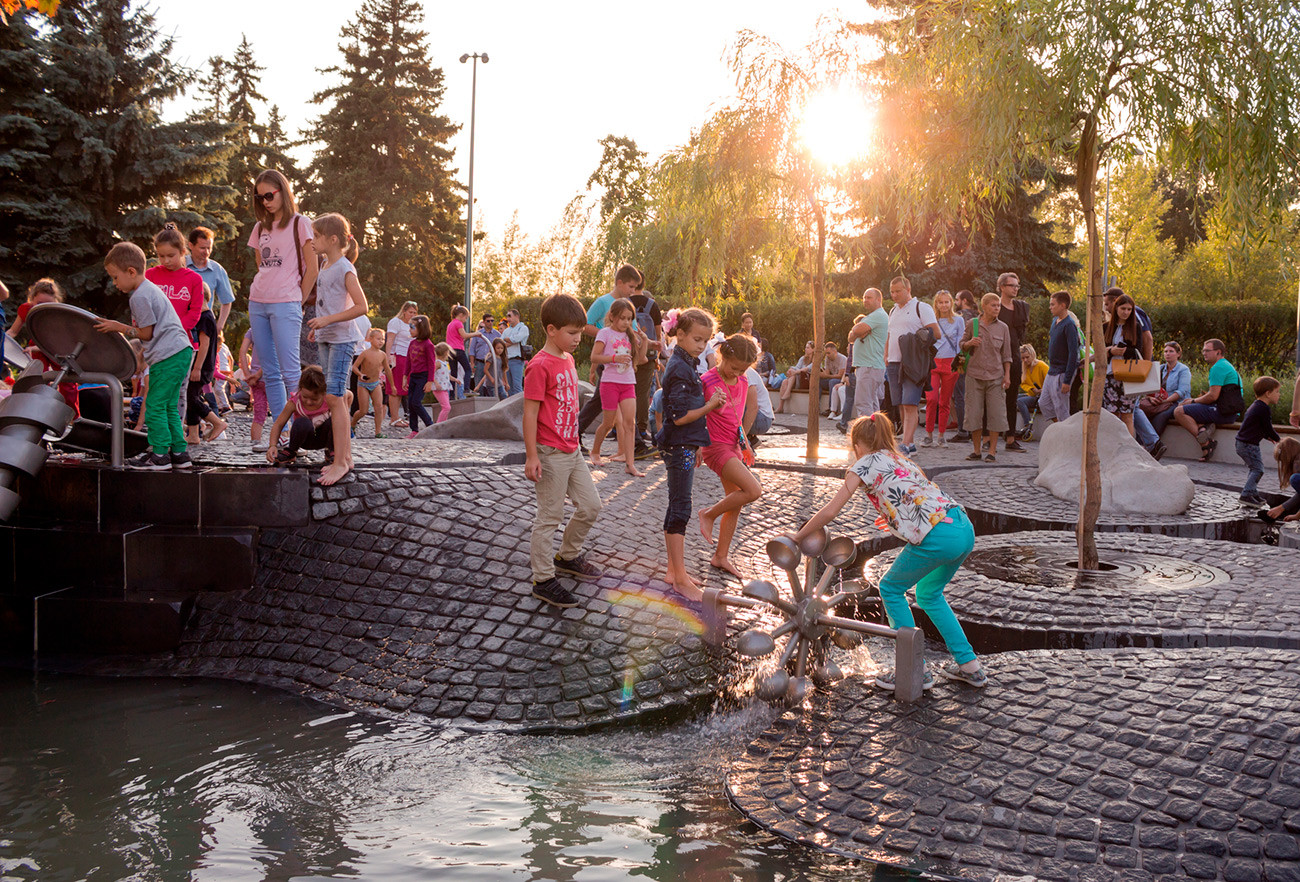 Gorky Park has always been a family-friendly park and a favorite place for kids of all ages. You can find a lot of entertainment for kids near Pioneer Pond, including a nice carousel and a recently opened  playground. It is an entire mini-world, a cross between a jungle and an aqua park. There are lots of slides and monkey bars, where kids can climb and have fun on, including the ‘Mega swings’: 29 swings that rotate and move all the possible ways and display an awesome night light show. 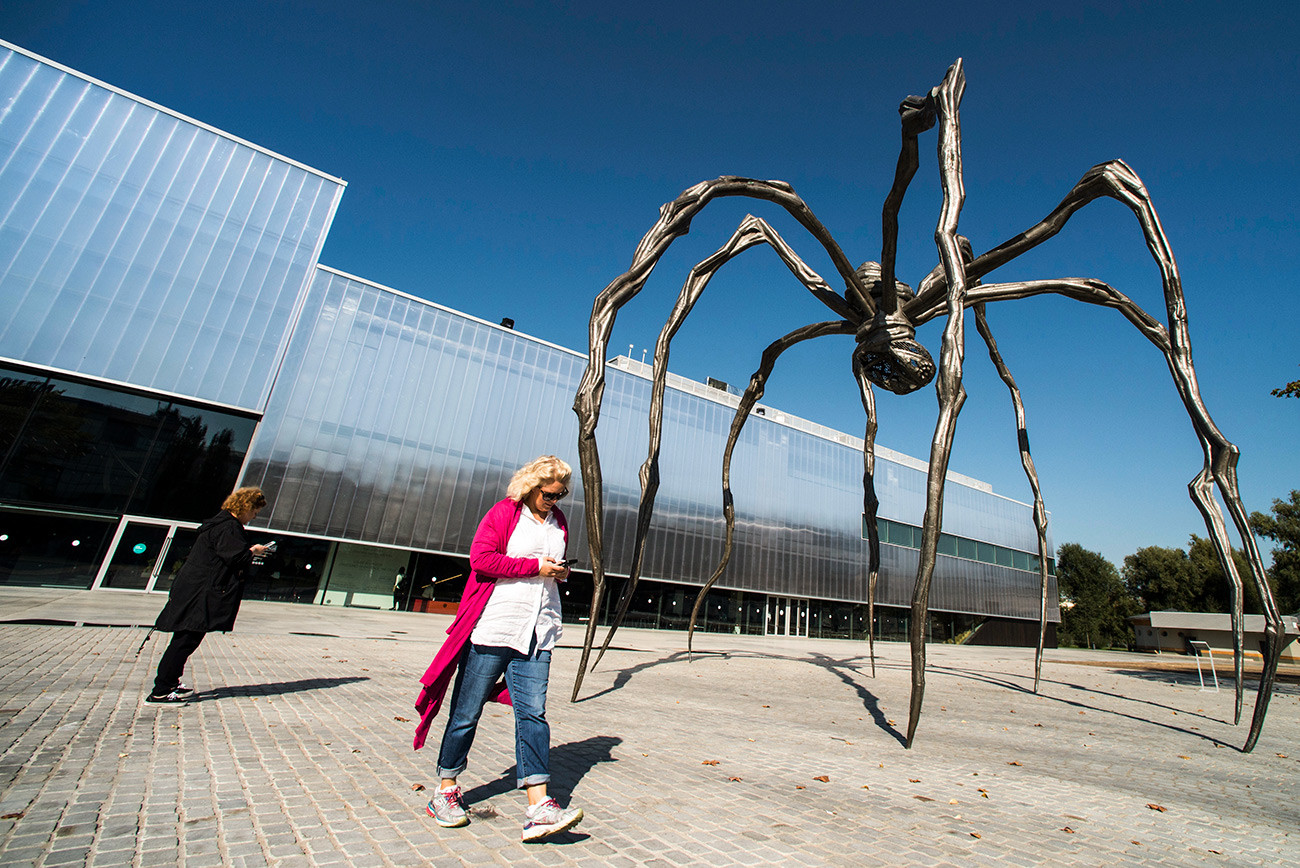 The park hosts the ‘Garage Museum for Contemporary Art’, which is probably the main and most famous institution of its type and founded back in 2008. It hosts large exhibitions of the world’s and Russia’s most interesting artists and runs a big educational program.

The museum’s building also deserves your attention. It currently looks like a modern  polycarbonate construction. However, it was once an abandoned Soviet restaurant, which was reconstructed and redesigned by Dutch architect Rem Koolhaas, who preserved original Soviet elements, such as some mosaics - which you can explore once inside. (You can also find a nice restaurant in the museum) 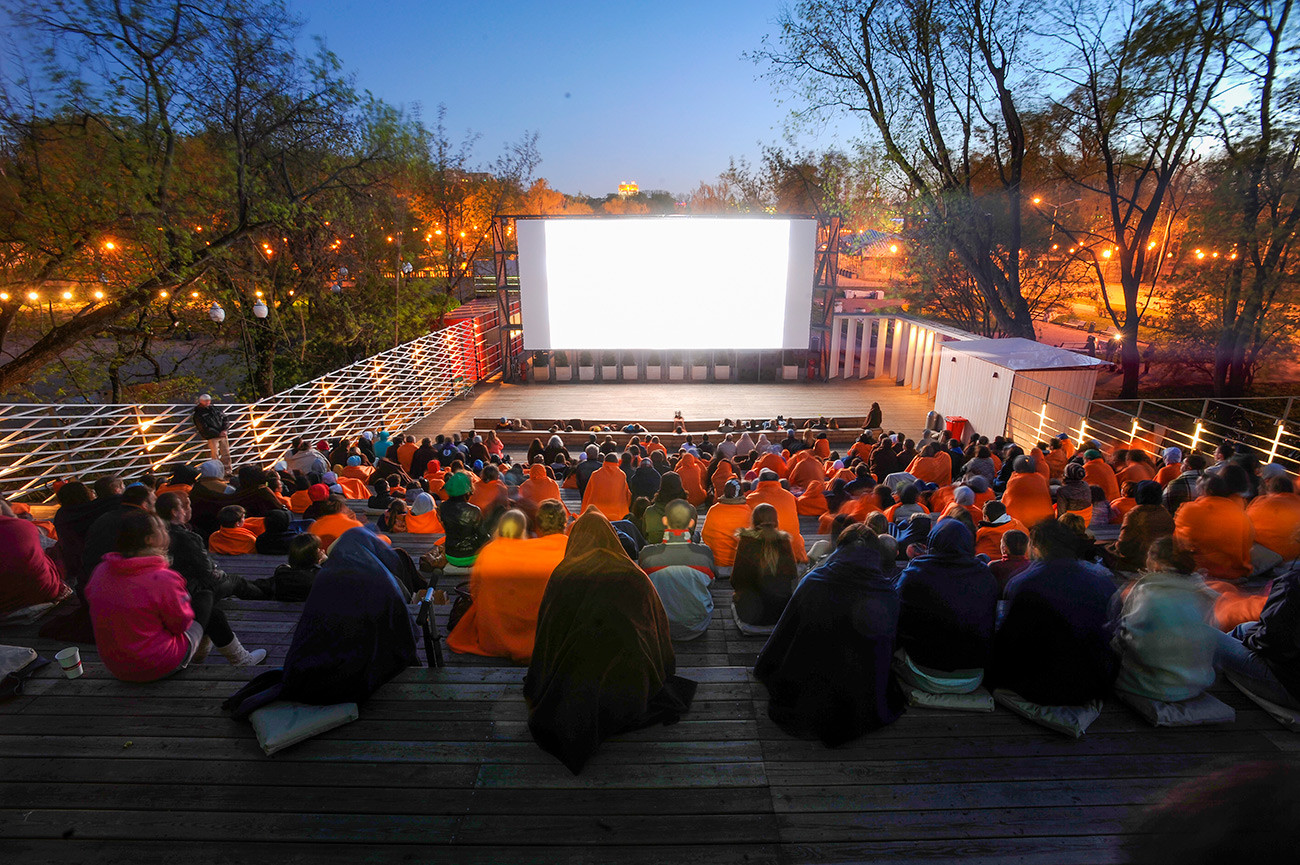 In summer, Gorky Park has an open air cinema called ‘Pioneer’, which screens a lot of movies - from mainstream to art house. Some movies also have English subtitles. Check the schedule and book tickets in advance here.

Garage museum also has its own cinema called ‘Garage Screen’, which screens a wide range of films and documentaries devoted to art and hosts lectures from a variety of interesting speakers. Check the schedule here. 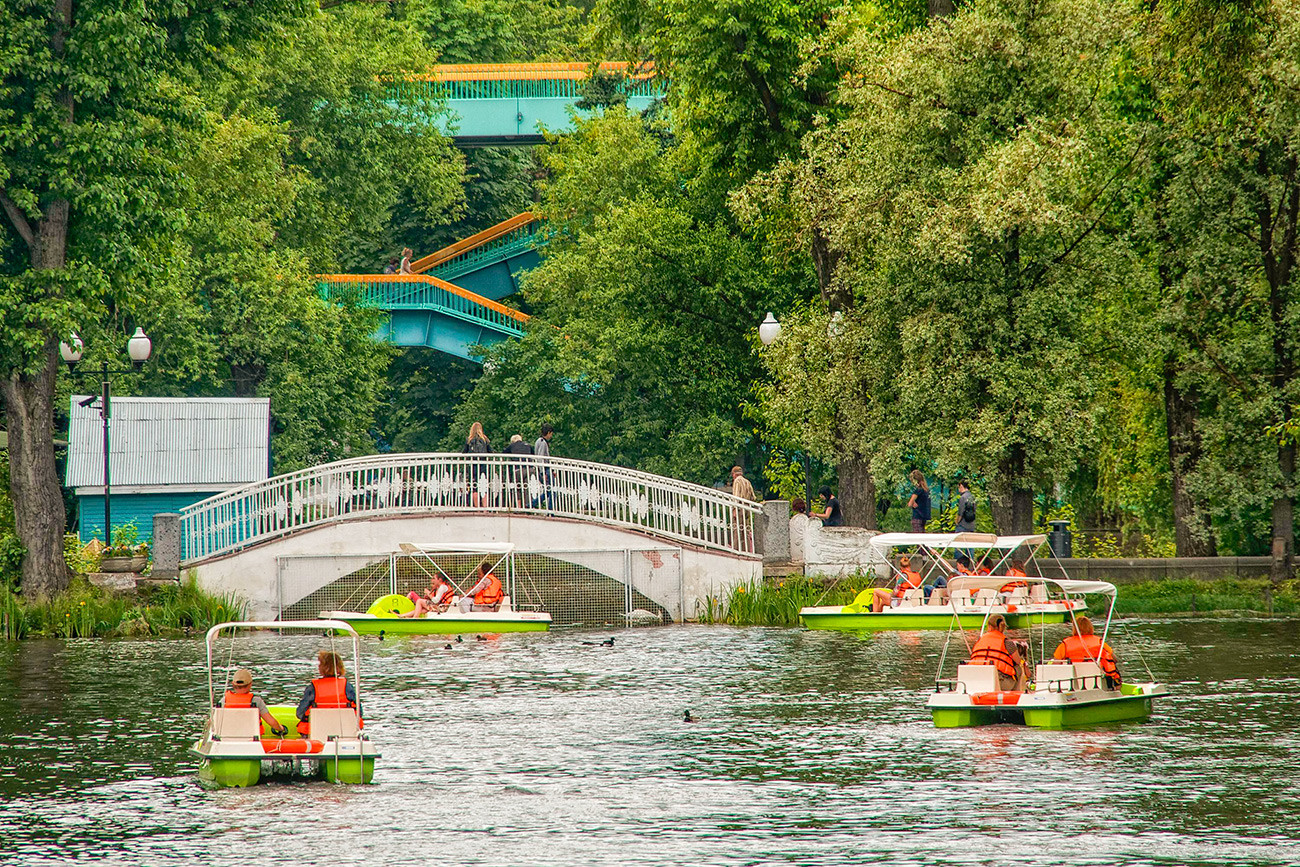 Though you might have to stand in a long line to get a boat on weekends, it’s nice to be able to paddle a little in nature, while being in the middle of a megapolis! Both park’s ponds, Golitsyn (a bigger one) and Pioneer, offer boats and catamarans for rent at affordable prices (check them here). 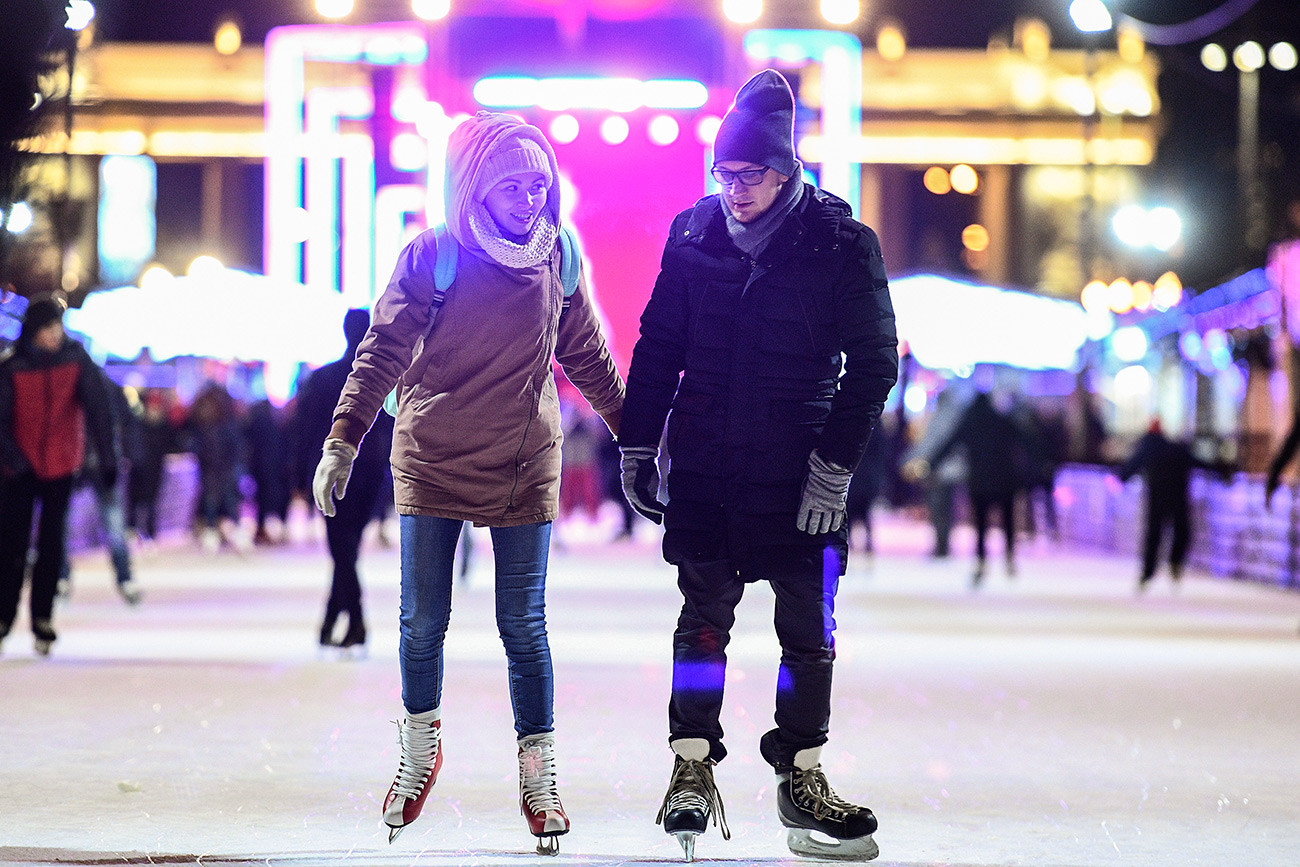 In winter, Gorky Park transforms into a wonderland with one of the most gorgeous ice skating rinks in the city. You can enjoy the additional music, New Year festive atmosphere - and mulled wine (just not on the ice!). There are also plenty of ice skate rental points and very comfortable and warm changing rooms.