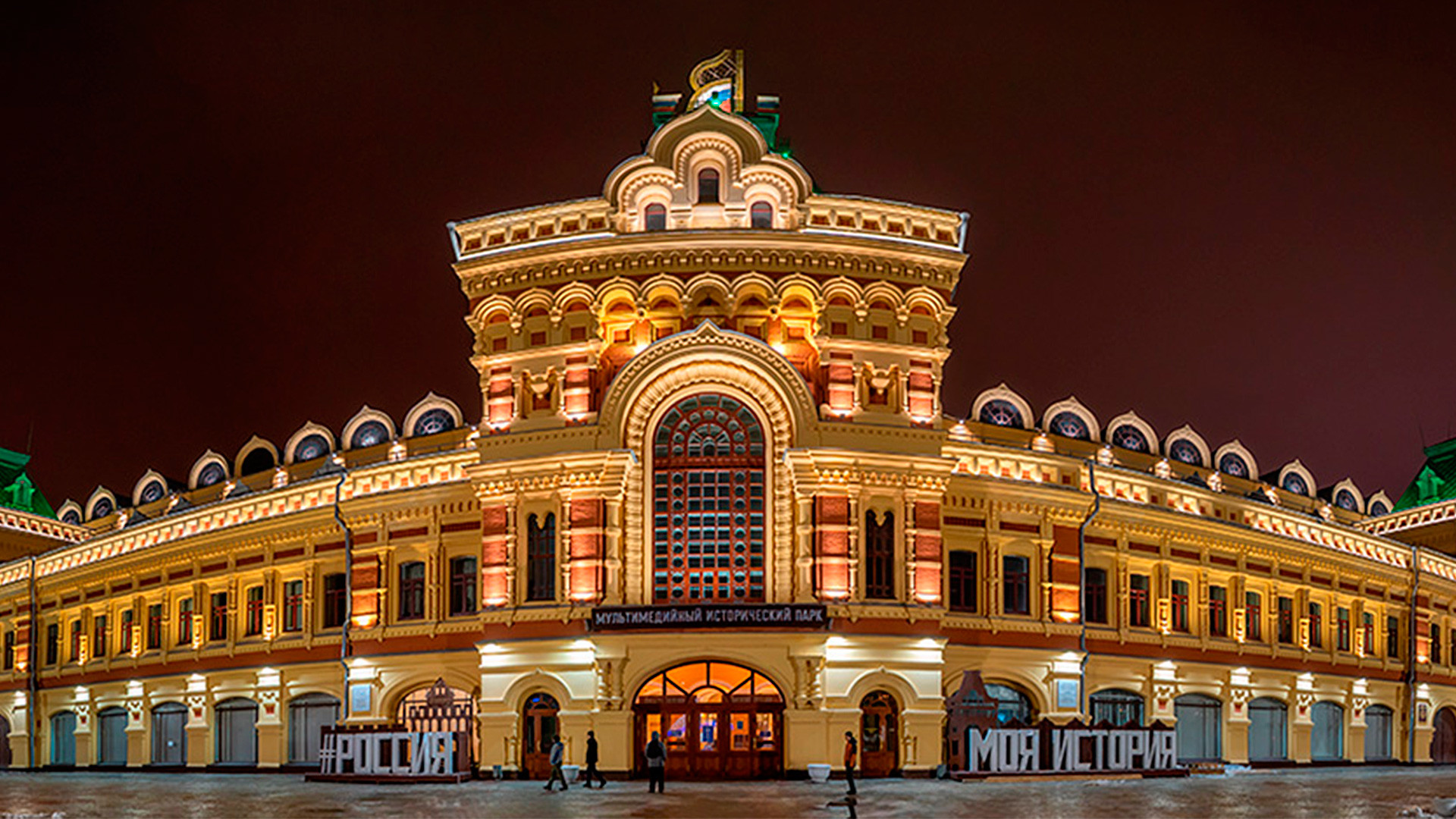 Legion Media
Founded in 1221, Nizhny Novgorod has quickly become one of the most prominent Russian cities – a trade center, an industrial hub, a cultural destination.... And it’s currently the fifth largest city in Russia, with a population of more than 1,2 million people. 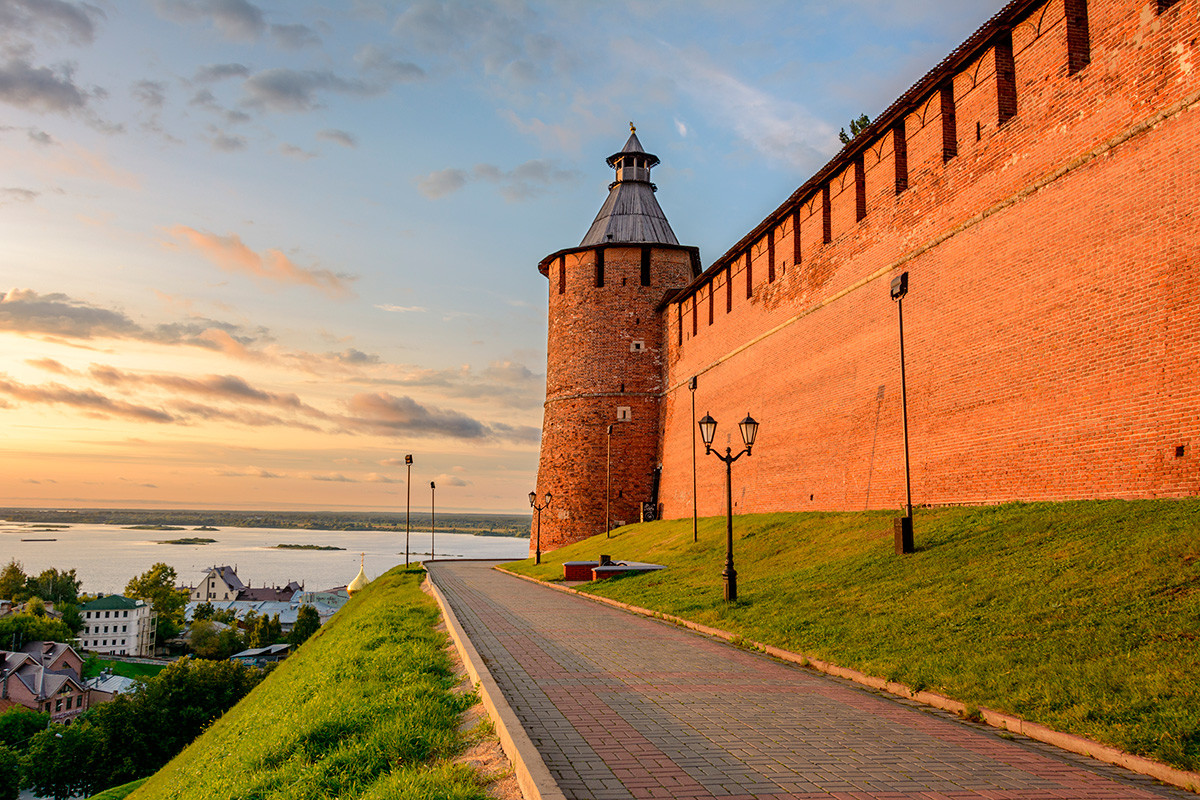 The kremlin in Nizhny Novgorod stands in the city’s historic center. Although a wooden fortress stood here long before it, construction of the stone Kremlin began in 1500. The remaining walls of the old wooden fortification were destroyed by fire in 1513.

The fortress had a permanent garrison with solid artillery weapons, as it served as an important military outpost for Moscow during the military campaign against the Khanate of Kazan.

Today, the monumental structure houses the city and provincial authorities, while a part of the stone kremlin wall is open for tourists.

2. The Main Building of the Nizhny Novgorod Fair

According to some sources, the fair dates back to 1524. It was set up by Moscow princes to compete with a fair held in the Tatar capital of Kazan. In its prime, the fair was one of the largest commercial centers in the whole country and was attended by merchants from as far as India, Central Asia, and Iran.

The current main building of the fair was constructed in 1817. Originally, it housed the governor’s apartments along with official institutions paramount for the fair’s functioning. These days, the fair is also held annually, though on a smaller scale compared to massive trading that happened there a few centuries ago. 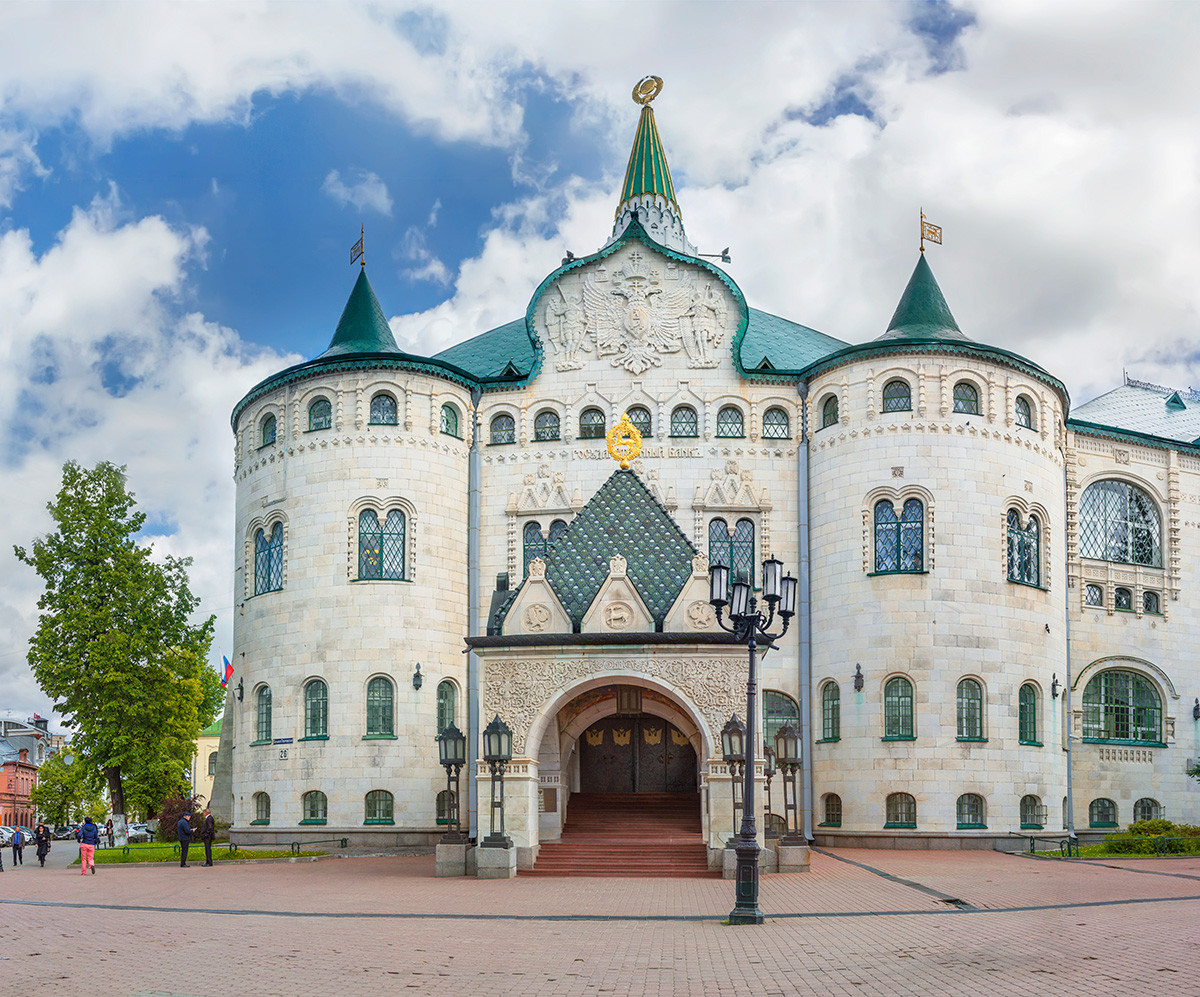 This magnificent building was constructed in 1913 to celebrate the Romanov Tercentenary, a grand celebration of the ruling of the House of Romanov. Emperor Nicholas II even paid a visit to this place on May 17, 1913. The interior design corresponds to the rich exterior, that’s made in neo-Russian architectural style, something that was common for extravagant buildings of the late tsarist era. The walls inside the building are painted in accordance with sketches by famous Russian artist Ivan Bilibin. 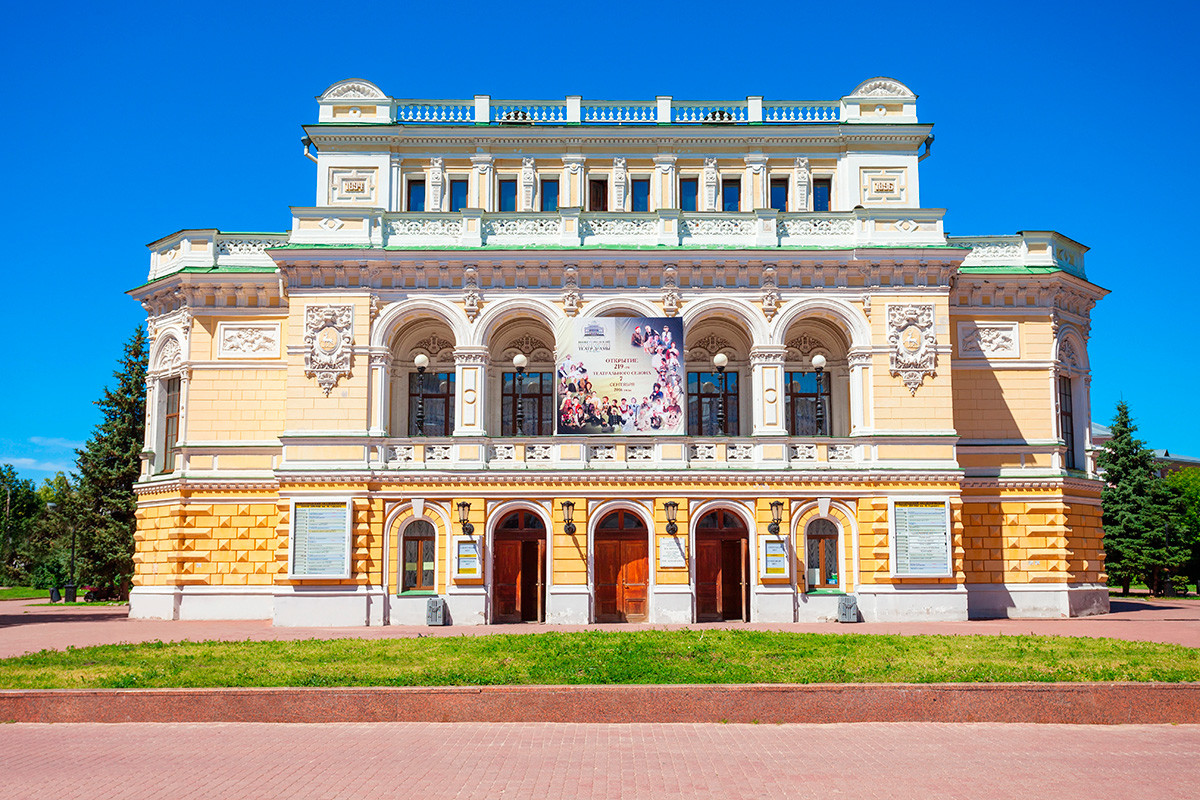 The original building of 1798 was modest. Contemporaries described it as dark and clumsy. It hosted a theater where actors were peasant serfs. Yet, in 1896, a prominent Russian architect of German origin named Victor Schröter stepped in to design a new building that is, arguably, one of the most beautiful in the city. 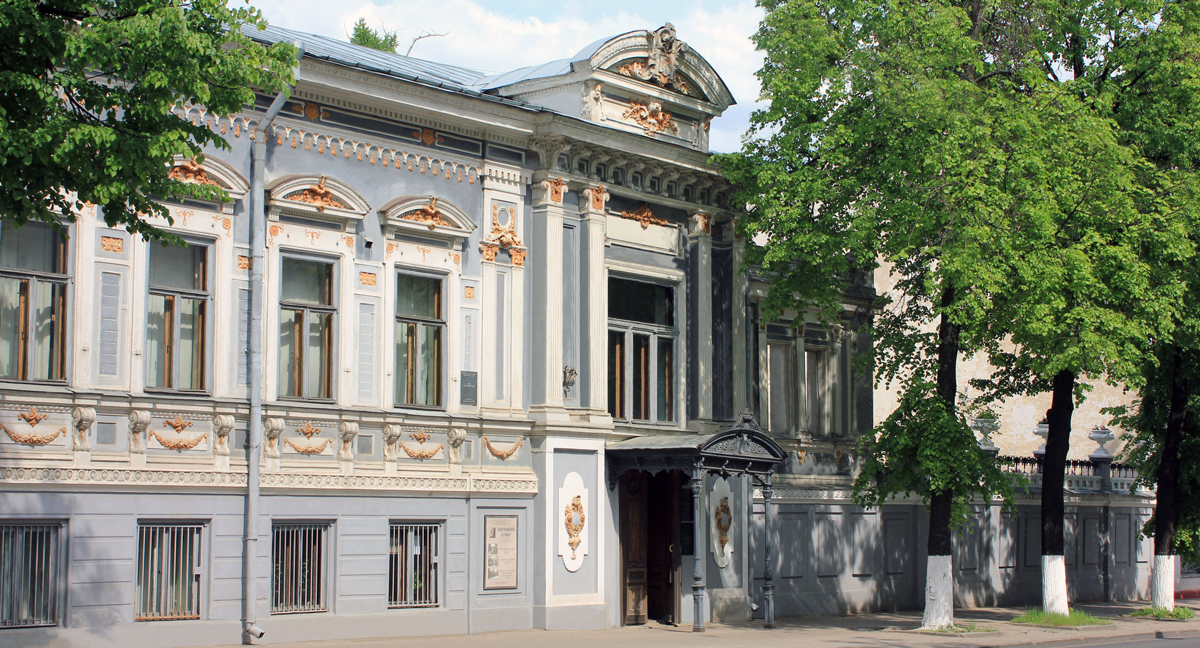 This is one of the few remaining mansions of the 19th century in Nizhny Novgorod that has preserved its original interior. It also has been declared a monument of Russian history and culture.

Originally a merchant’s mansion, the building became a museum dedicated to one of the most celebrated Soviet writers, Maxim Gorky, in 1934. Under Soviet governance, from 1932 to 1990, the city itself used to be officially called ‘Gorky’ – to commemorate the writer’s work. 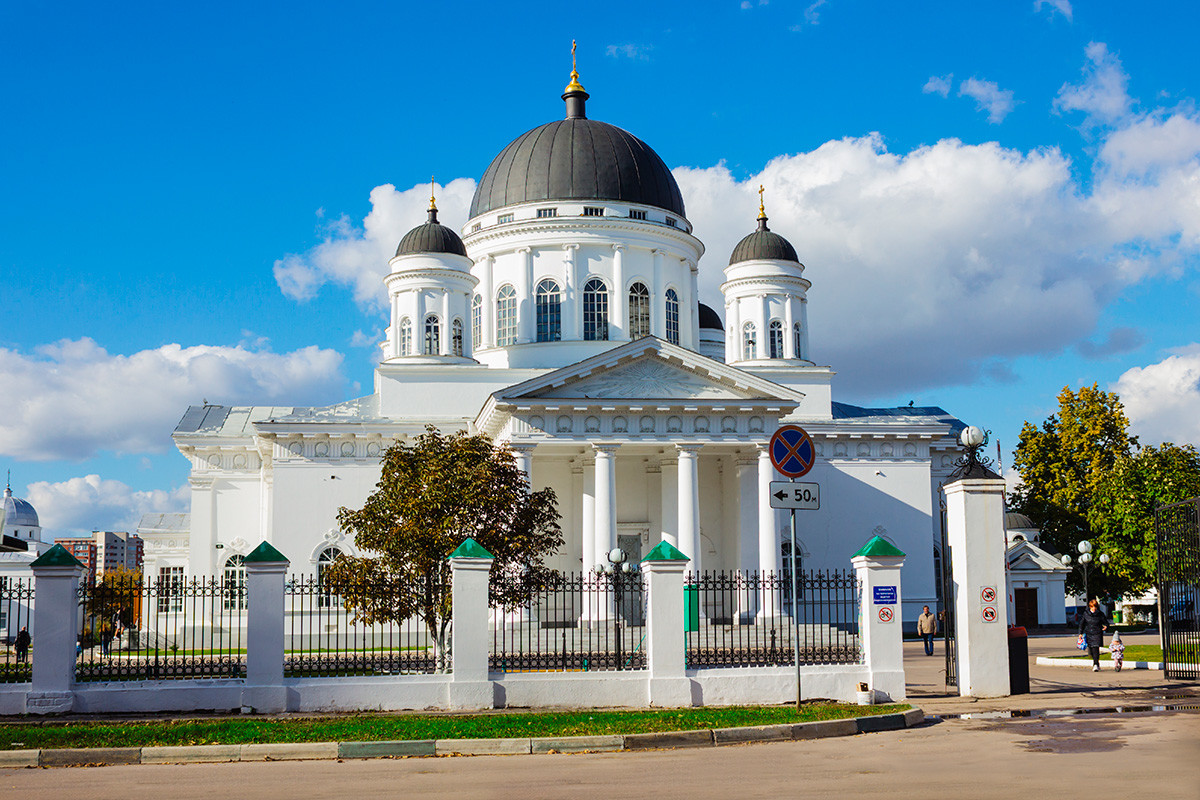 The cathedral was built between 1816 and 1822. French classicist architect Auguste de Montferrand, architect of Saint Isaac’s Cathedral and Alexander Column in St. Petersburg, helped to design this beautiful cathedral. It’s called ‘Old Market’, because initially it was constructed for the benefit of the Nizhny Novgorod Fair.

Today, it is a fully functioning cathedral. In 2009, a monument of an angel was constructed near the cathedral. It is dedicated to the Chernobyl liquidators, civil and military personnel who were called upon to clear the site of the Chernobyl nuclear disaster of 1986. 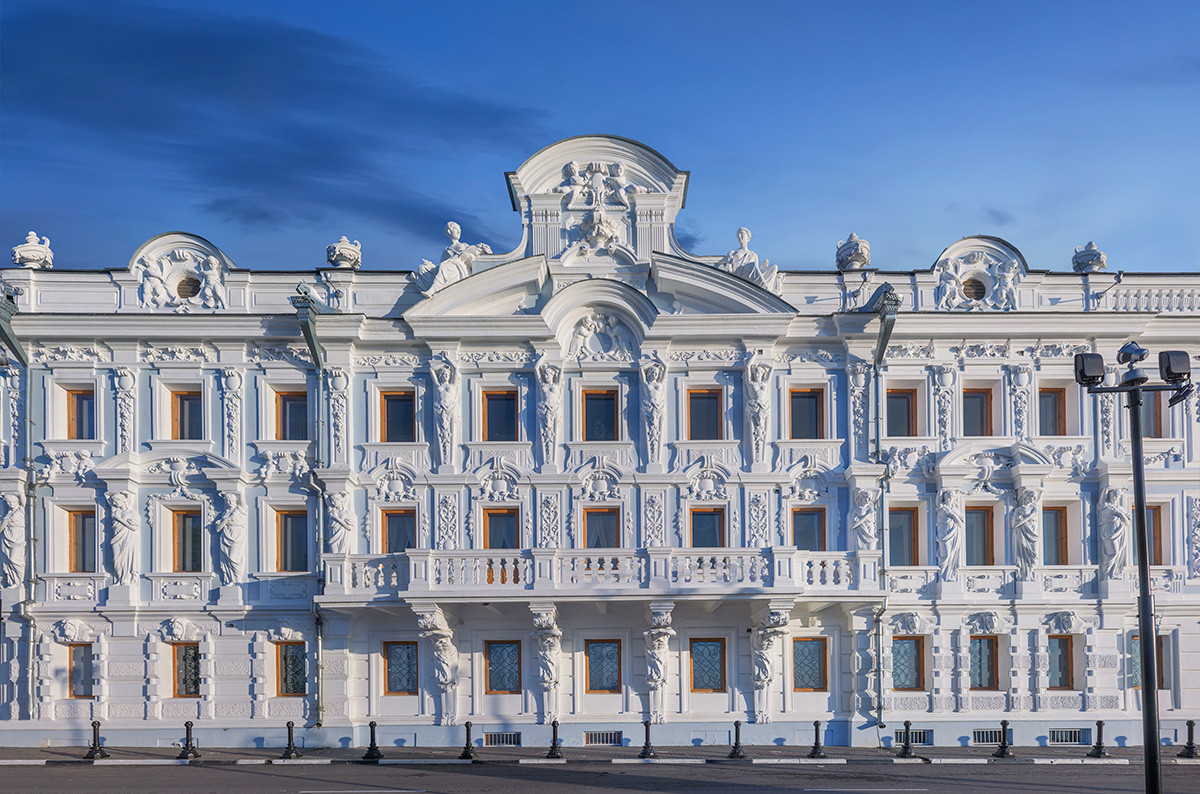 Today, it hosts the Nizhny Novgorod State Museum of History and Architecture. 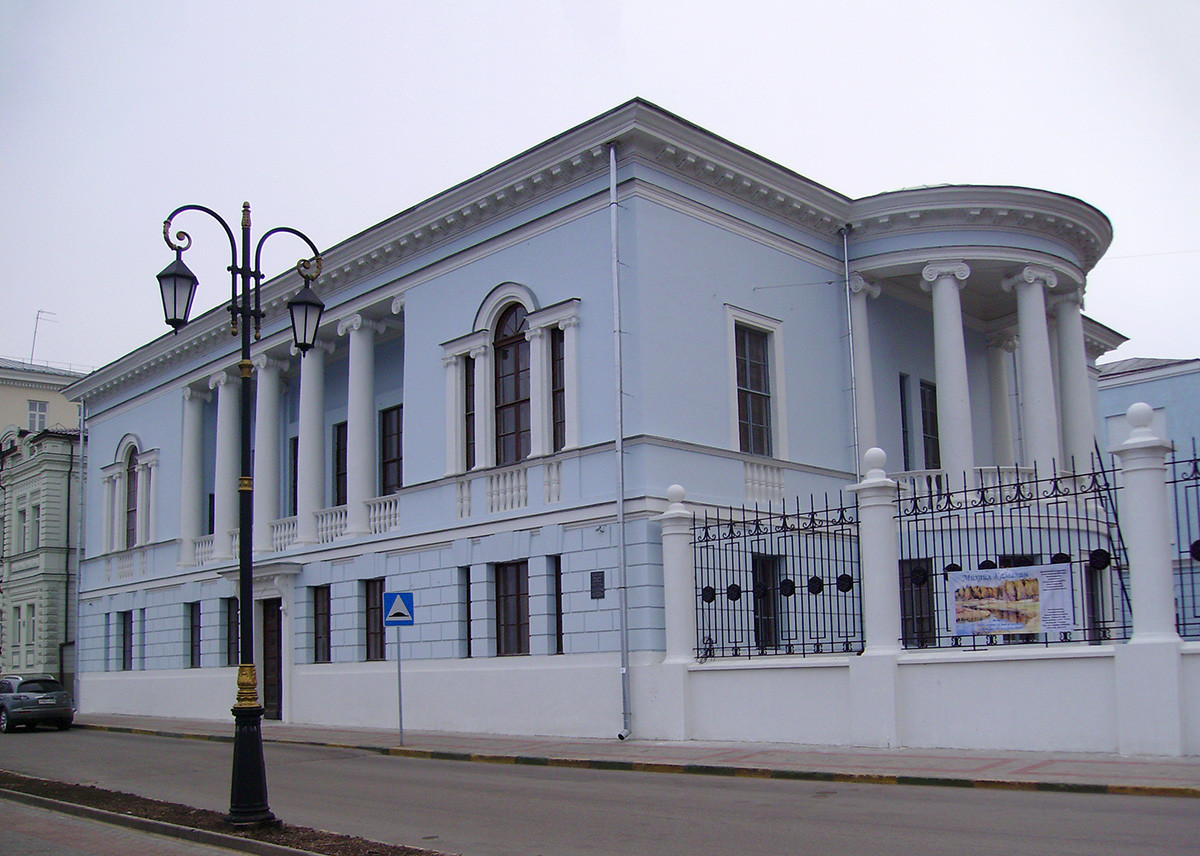 This building was constructed just before the Russian Revolution, in 1913-1916, by the order of famous shipowner and merchant Dmitry Sirotkin. The architects chose a classicist style with typical semi-rotundas. After the revolution, the city estate was nationalized and became a museum.

Currently, this building houses a collection of West European art owned by the Nizhny Novgorod State Art Museum. The most well known and precious painting there is ‘The appeal of Minin to the citizens of Nizhny Novgorod’ by Konstantin Makovsky. 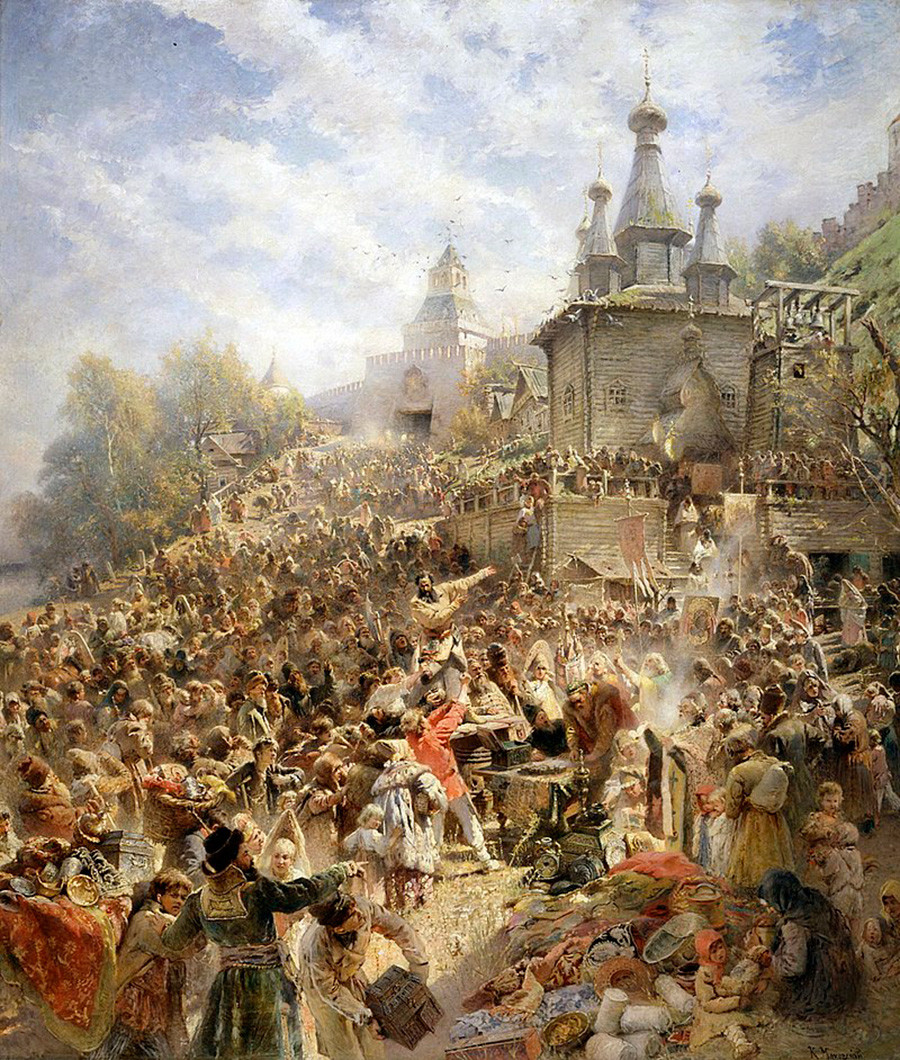 ‘The appeal of Minin to the citizens of Nizhny Novgorod’ by Konstantin Makovsky. 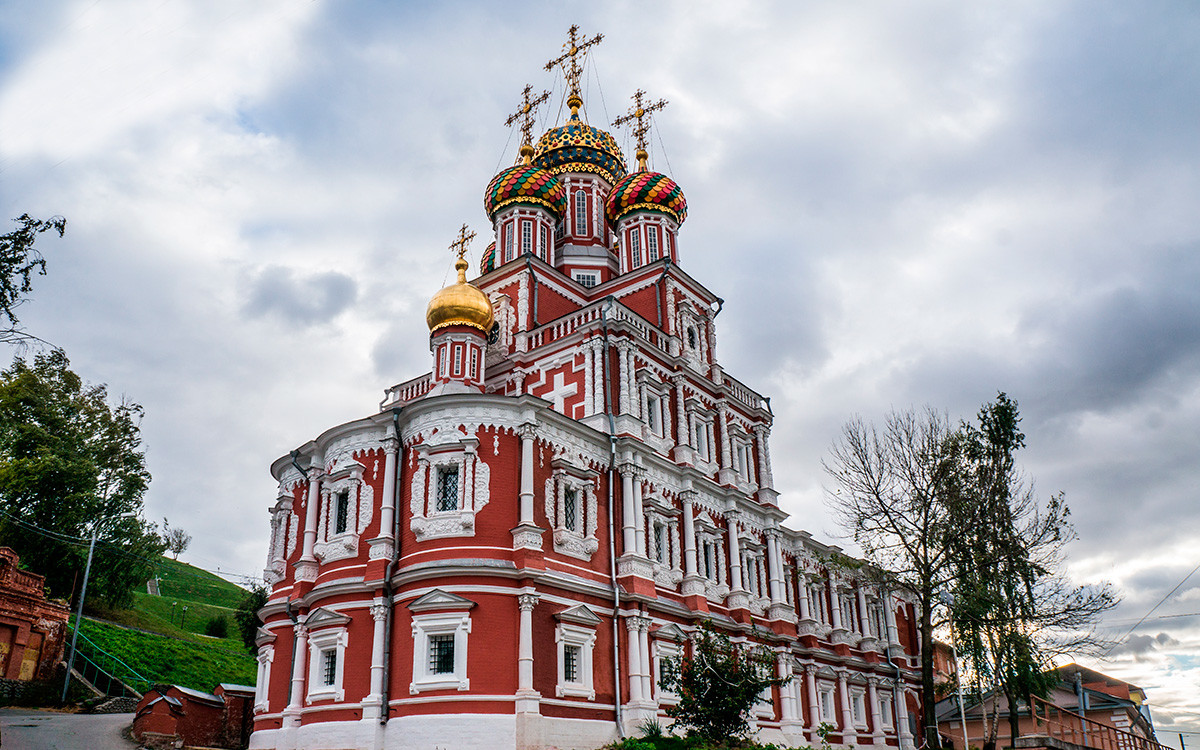 The official name of this building is ‘Church of the Nativity of the Blessed Virgin Mary’, yet it is commonly referred to as the ‘Nativity’ or ‘Stroganov Church’, as its construction that lasted from 1696 to 1719 was sponsored by the merchant Grigory Stroganov.

Today, the building has the status of a monument of architecture of federal significance.

10. Church of St. John the Baptist 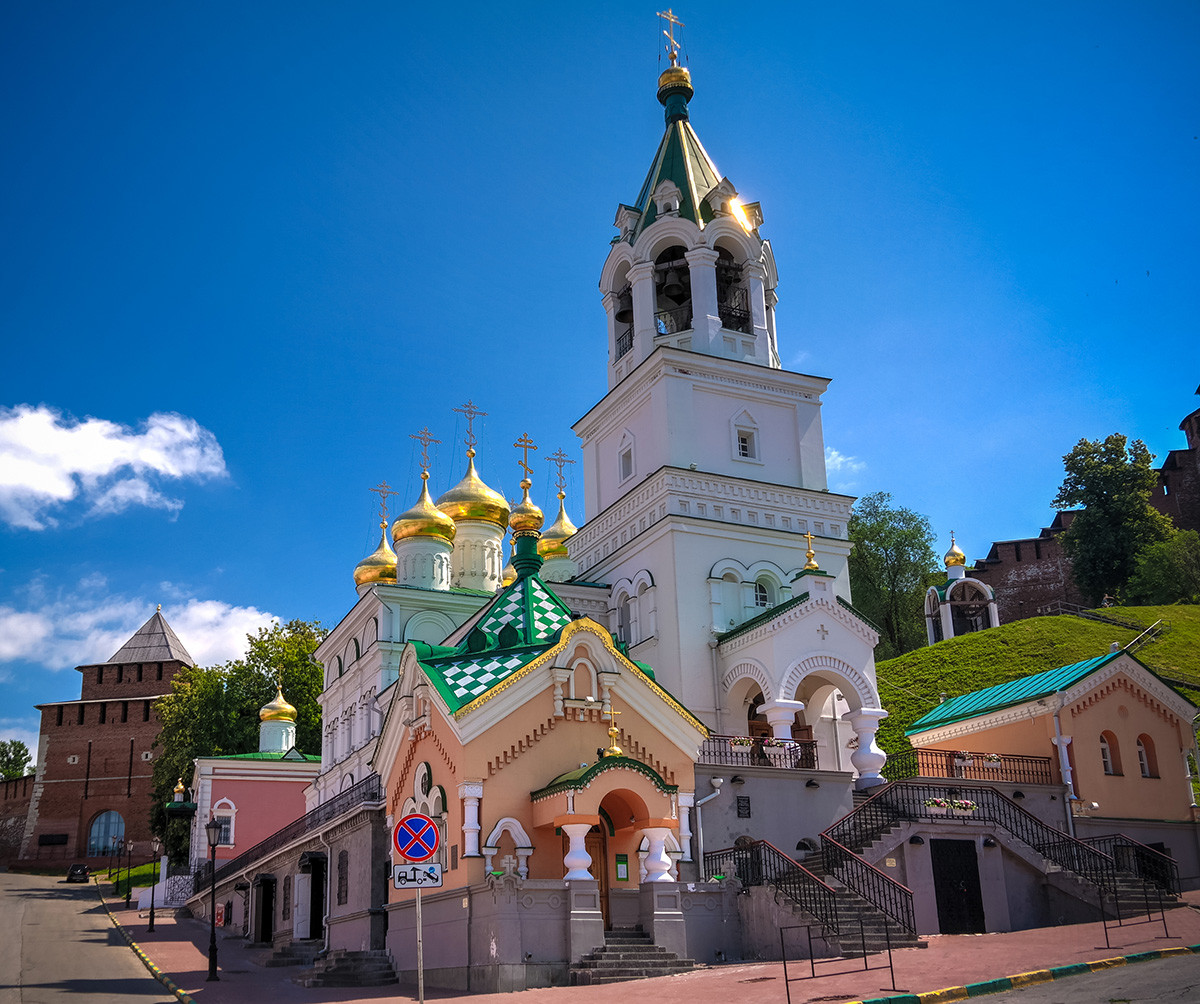 This building is one of the oldest orthodox churches in the city. The original wooden construction of the 15th century was reconstructed in stone in 1676 with the personal funds of merchant Gavriil Dranishnikov, who offered to sponsor the construction as a gesture of commitment to Orthodoxy after his wife and son had converted into Old Believers.

From the porch of the wooden church, Russian national hero Kuzma Minin appealed to the citizens of Nizhny Novgorod to liberate Moscow from the Polish invasion in the early 17th century.

Click here to see pictures of 10 most BEAUTIFUL buildings & sites in Sochi.