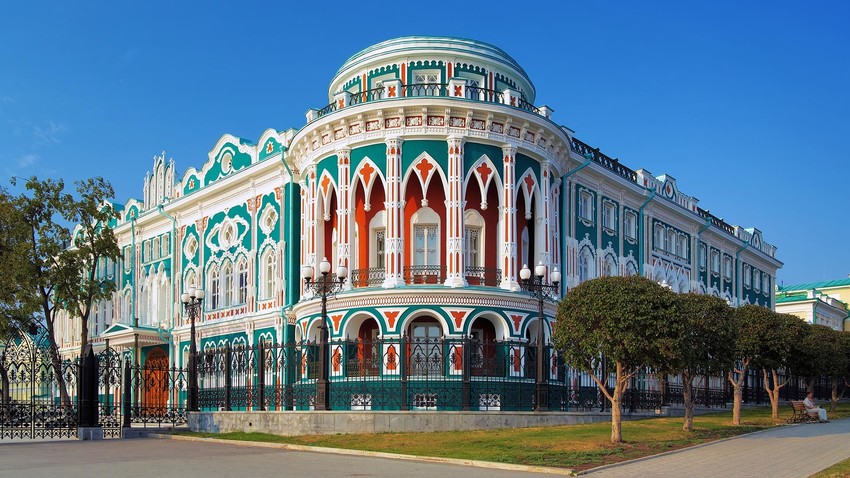 Legion media
This is the city where the Romanov family was tragically murdered and where the Russian Federation’s first president Boris Yeltsin was born and made his career. Both occasions have been commemorated in the form of newly built sites. 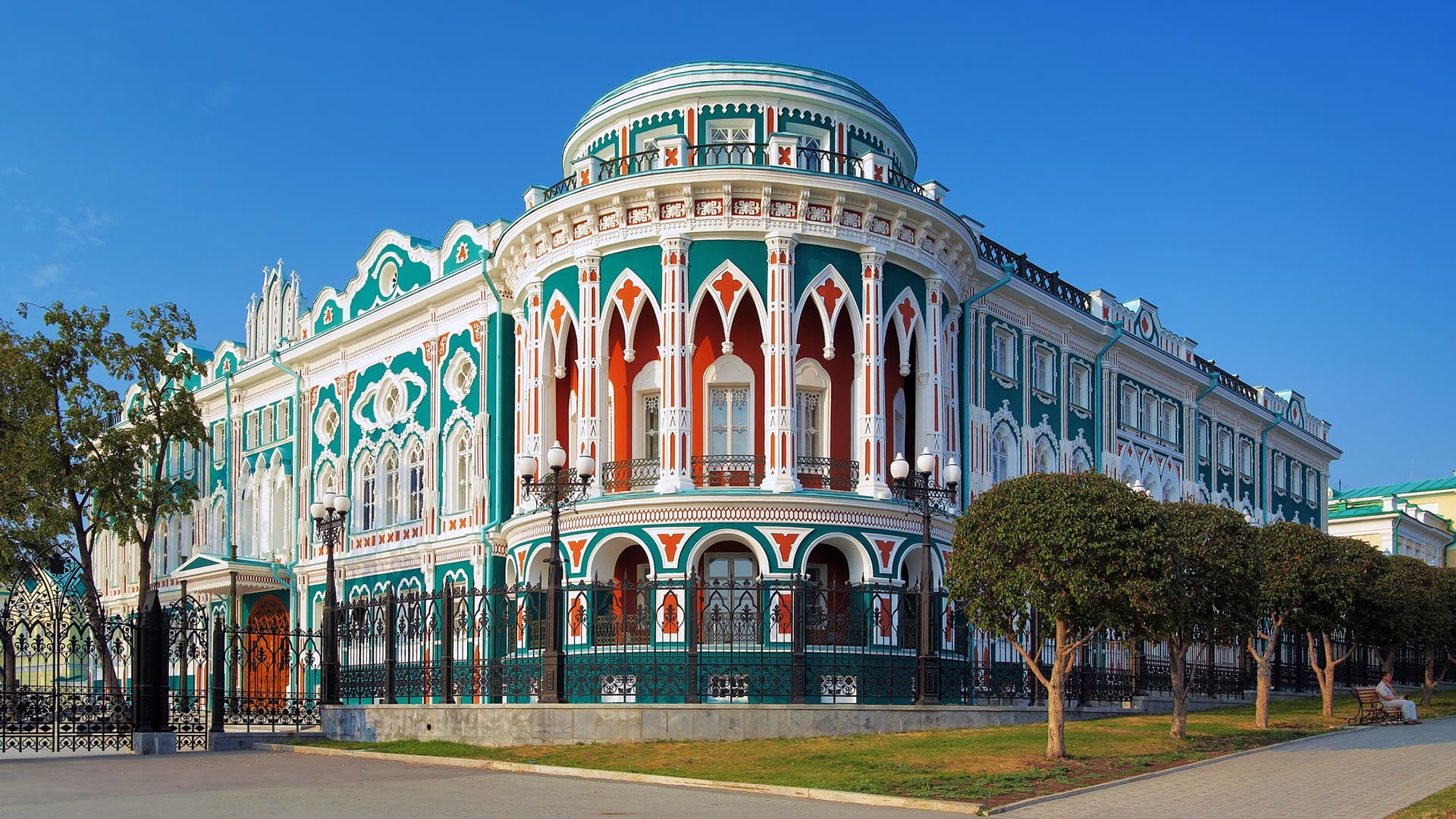 A local legend has it that the owner of this house used to live in a small shabby place right across this palace-like mansion, so that he could always observe it and appreciate its beauty. Although this very well might be an exaggeratedly romanticized version of history, Nikolay Sevastyanov — a civil servant in the Russian Empire — did like this palace so much that he commissioned an extravagant redesign of the mansion’s exterior giving it its current outlook.

After Sevastyanov was promoted and transferred to St. Petersburg, the mansion was bought by the state and later occupied by a local court office. After the revolution in 1917, the building hosted the first city-wide Bolshevik conference in Yekaterinburg with a sign proclaiming “Glory to the working class” appearing on the roof.

The Sevastyanov House hosted delegates of the Shanghai Cooperation Organization during the organization’s summit in 2009. 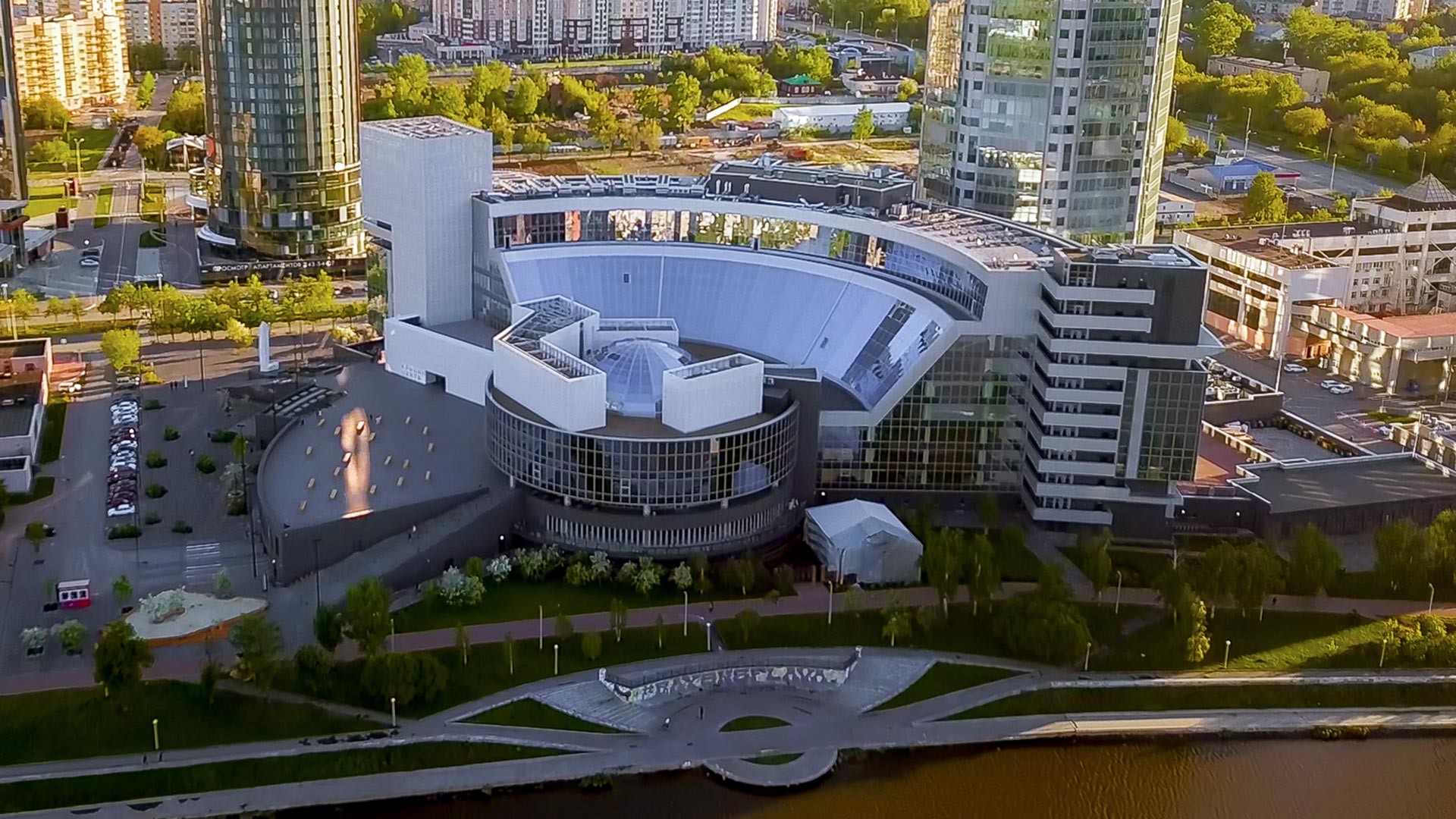 The main building is an interactive museum with many real artifacts from Yeltsin’s life, including his presidential limo and a meticulously recreated copy of his Kremlin cabinet where he announced his resignation on December 31, 1999.

Currently, the center has 9 halls and regularly hosts tours, lectures, various film festivals, and has an art gallery together with a range of stores and cafes.

The construction of the complex cost seven billion rubles (it’s hard to calculate the price in dollars, as the exchange rate fluctuated dramatically during the time of construction, but in November 2015 this sum equaled more than $100 million) with more than half of the sum allocated by the Russian government. The center was designed by Ralph Appelbaum Associates, one of the major architectural firms in the U.S. 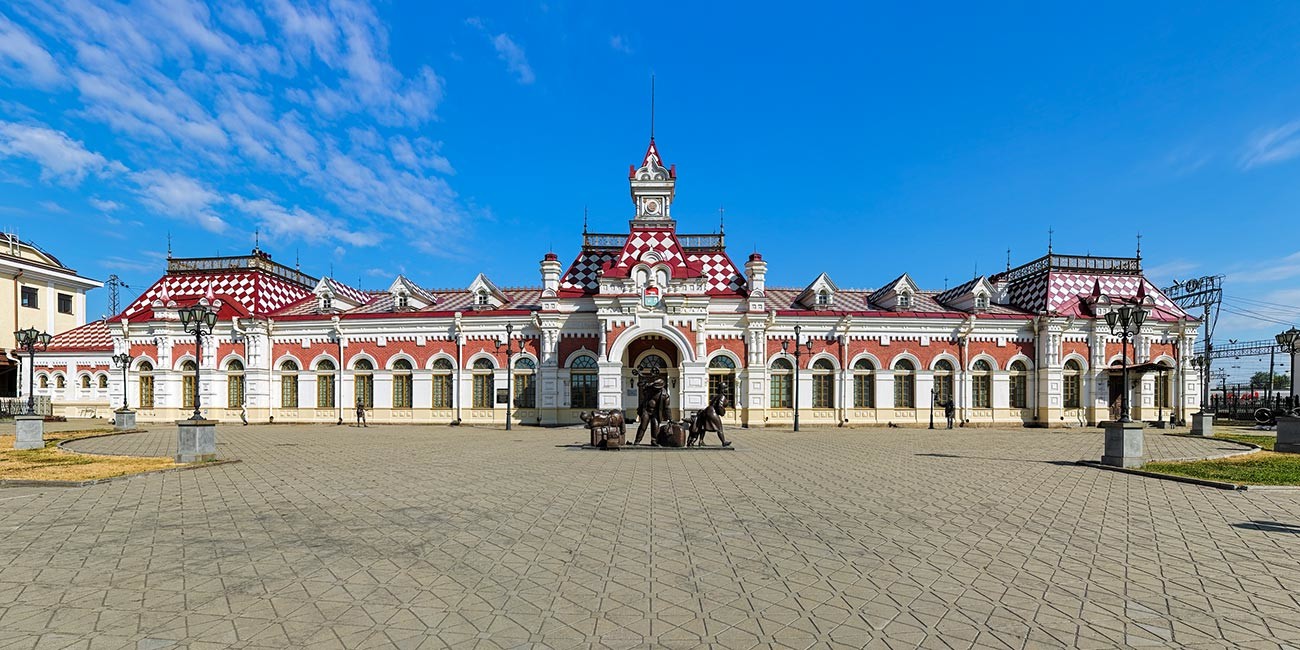 This magnificent railway station was built in 1879. It has a twin station, which is located in Perm, 300 kilometers away from Yekaterinburg.

Although it was originally a civilian railway station, it was repurposed in 1914 (four years before the start of the Bolshevik Revolution) to transport military personnel and army trains only. Today, the station no longer serves its original purpose, but instead is home to a museum dedicated to the history of the region’s railroad system. 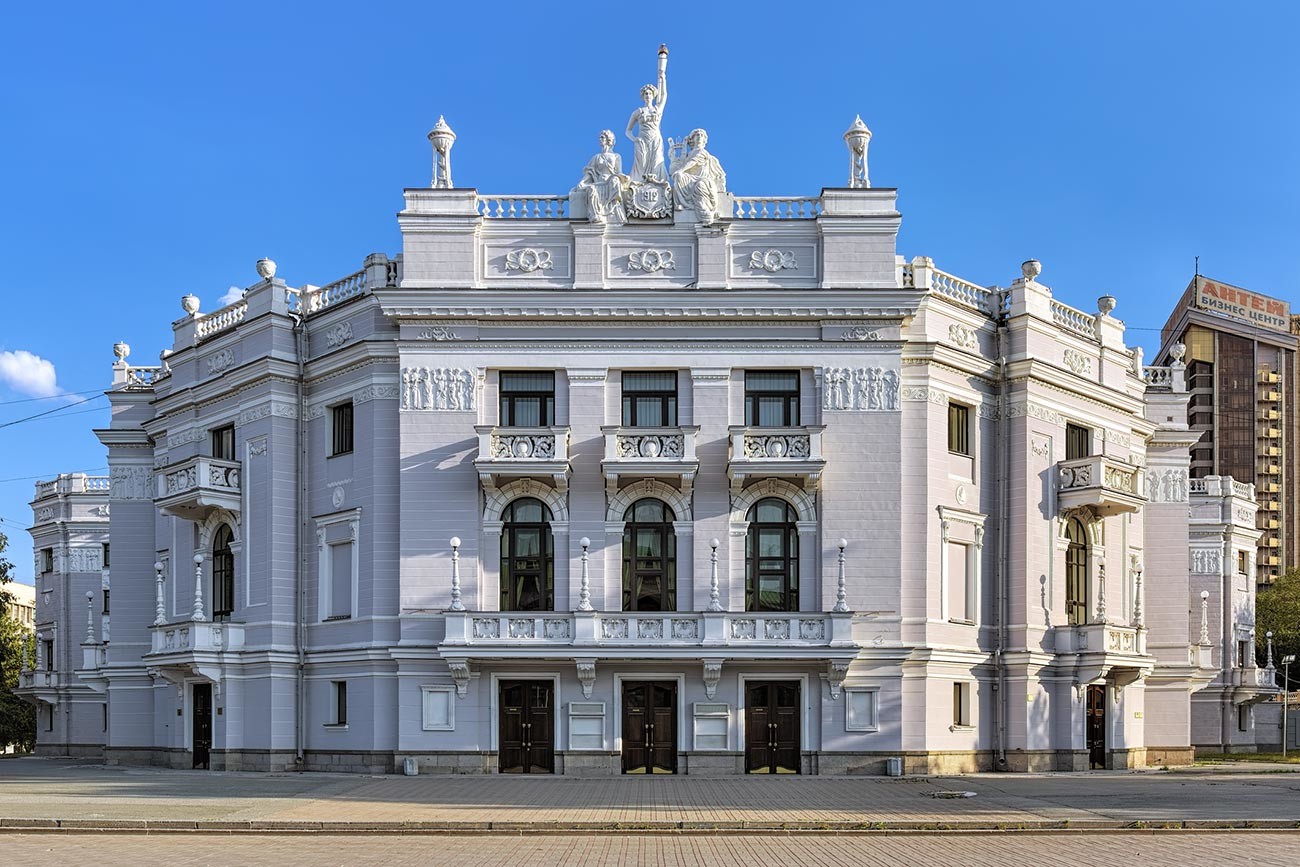 The building — constructed between 1904 and 1912 — became the main accomplishment of Russian designer Vladimir Semyonov, before his family was forced into immigration by Tsarist authorities, who suspected the architect’s wife sympathized with the Bolsheviks.

Ironically, it was in this building that the Yekaterinburg Councils of Workmen's and Soldiers' Deputies proclaimed the establishment of Soviet power in the city and the Urals.

After the return from exile, Semyonov served as the chief architect of Moscow from 1932 to 1934, a high office established after 1917. 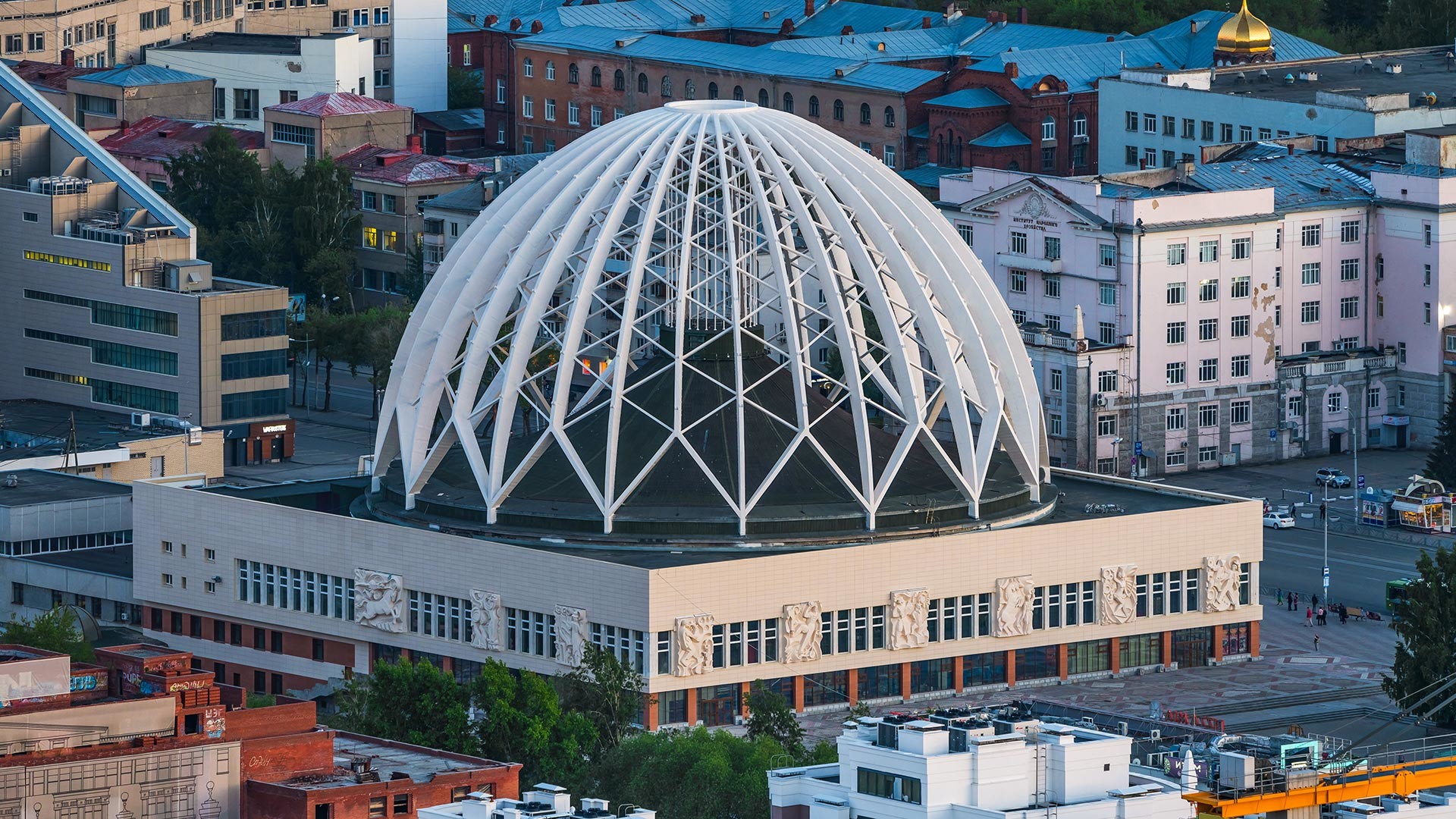 Before this striking building was constructed in 1980, the city had a circus building made of wood. When the original building burned down in 1976, the construction of this modern building began.

At the time of construction, it was considered one of the best circus buildings in the whole of the USSR and was well suited for complex circus acts.

The building’s unique feature is its white dome made of semi-arches. 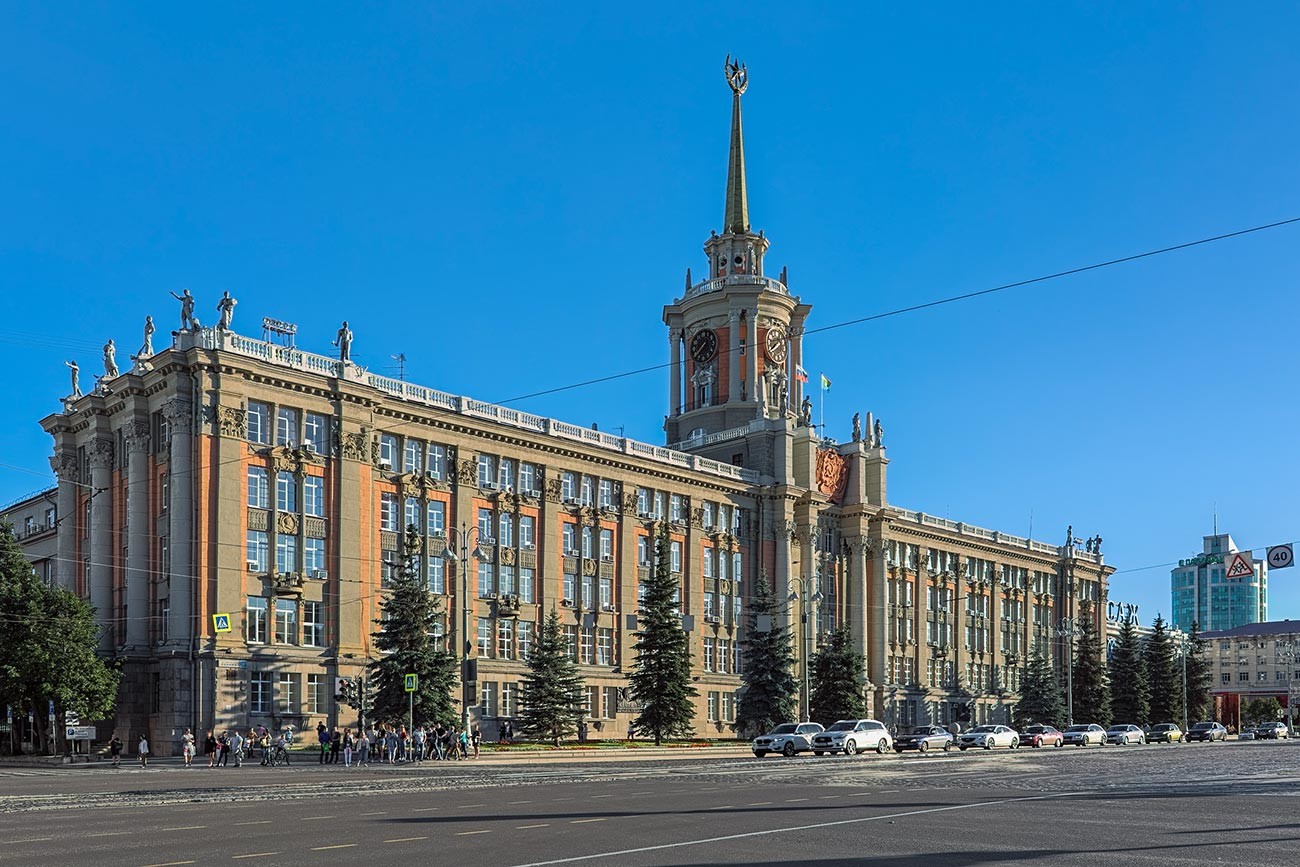 This is one of the main architectural landmarks of Yekaterinburg. Before the October Revolution in 1917, this land was occupied by a Gostinyi Dvor, a marketplace in Tsarist Russia. Later, the old building (that no longer exists) housed local branches of a regional museum.

Everything changed in the 1930s, when, gradually, the old building began to be renovated and transformed into something entirely new. The transformation period lasted through to 1954, when the resulting building acquired a spire decorated with a five-pointed star illuminated from within. It was this 61-meter long spire that made the Sverdlovsk City Council building a dominant architectural landmark in the city.

Today, it hosts the city administration and the Yekaterinburg city Duma, a legislative body.

7. Church of All Saints 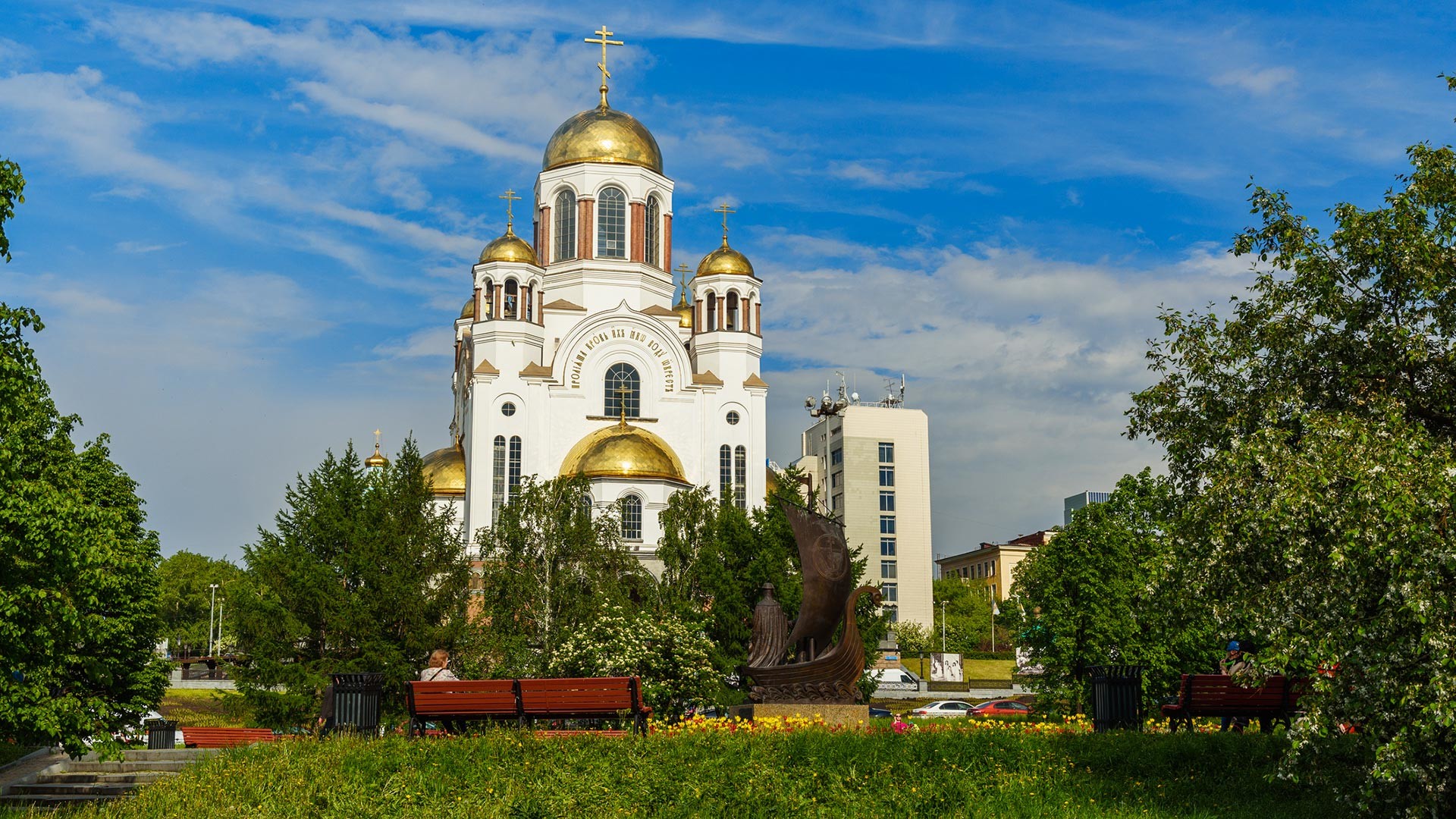 This modern church built only between 2000-2003 has a special status for Russian believers and Russian culture, as it was built on the site of the Ipatiev House, a place where the last Emperor of Russia Nicholas II and his family were executed by the Bolsheviks in summer of 1918.

The Ipatiev house was demolished in 1977. under the orders of Boris Yeltsin, then chair of the local party and who would later become Russia’s first president after the collapse of the Soviet Union.

Despite this, pilgrims would still visit the site anyway. In 2003, the Russian Orthodox Church unveiled the new temple and a memorial complex dedicated to the Romanov family. 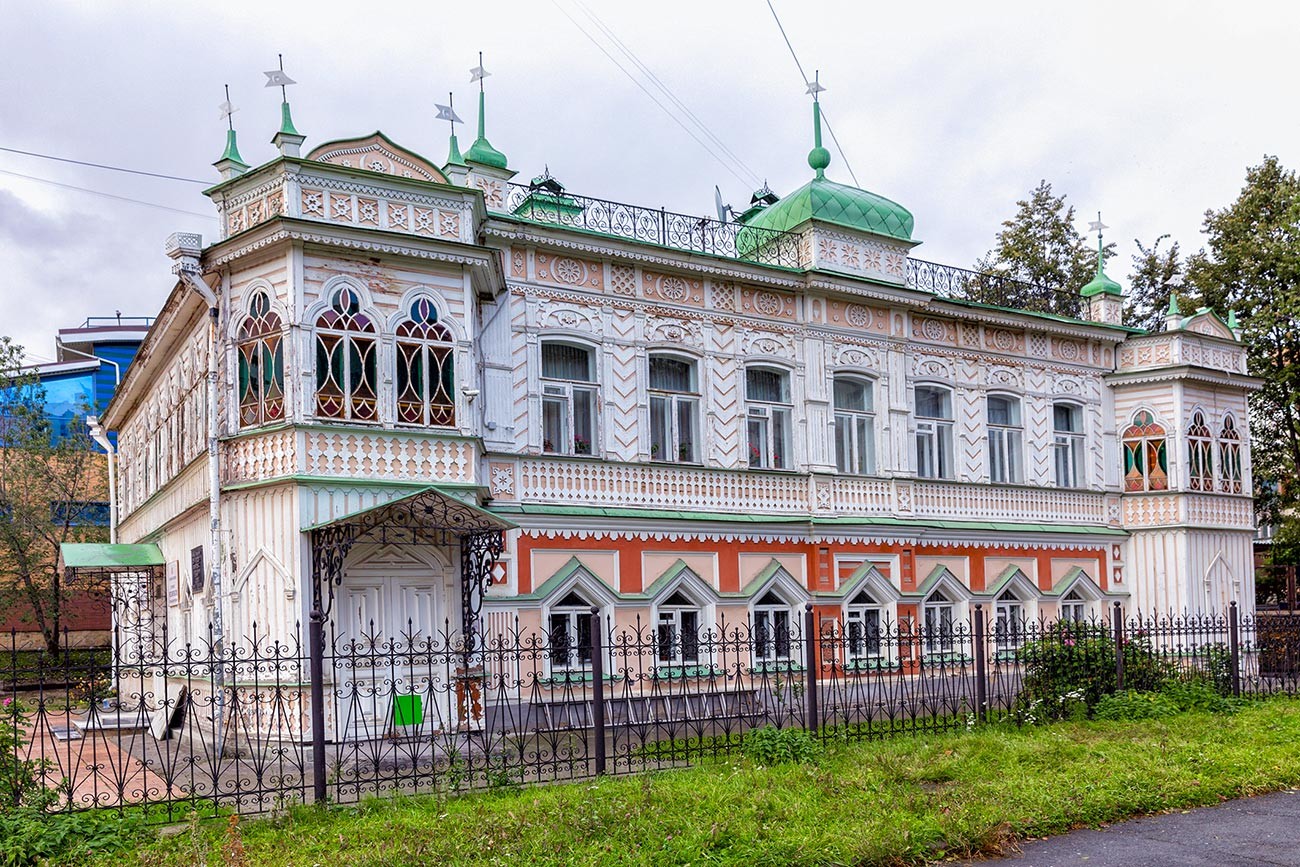 Before the Bolshevik Revolution, three brothers of the Agafurov family used to live in Yekaterinburg. Their father Khisametdin Agafurov had established a small trading company in the 1870s which sold fruit and tobacco.

When Khisametdin Agafurov died in 1883, his sons rapidly expanded the family business to other cities of the Russian Empire. They turned a modest trading enterprise into a merchant house well-known not only in Yekaterinburg, but also in other corners of the empire. The brothers’ merchant house also began trading gold and silver, perfumes and hunting accessories, shoes, stationeries and other popular items.

After the Bolshevik Revolution, the extended Agafurov family fled first to Japan and then to the Chinese city of Harbin, a safe haven for many anti-revolutionary Russians and White Russian emigres at the time. Although the once successful company folded soon after, the Agafurov family’s legacy remains in Yekaterinburg to this day.

One of the most important sites related to the merchant family is the House of Merchants, once owned by Zainetdin Agafurov, one of the three brothers. 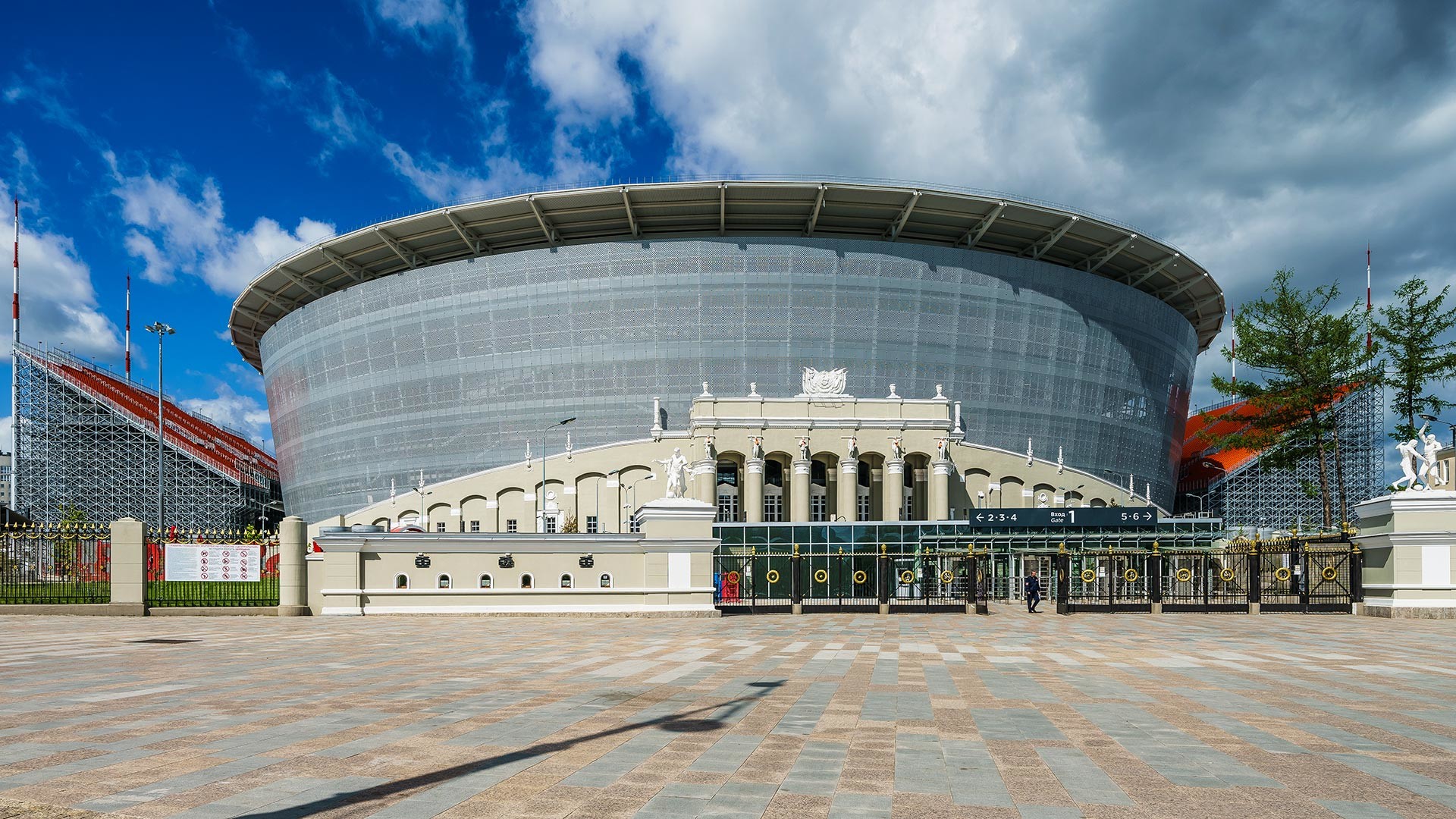 Unlike the Fisht stadium in Sochi that was built from scratch before the 2014 Winter Olympics and the 2018 FIFA World Cup, this stadium was first constructed in the 1950s. Yet, the old building underwent a major reconstruction from 2006 to 2011 that transformed it into the now-iconic Yekaterinburg Arena, known to football fans all over the world. 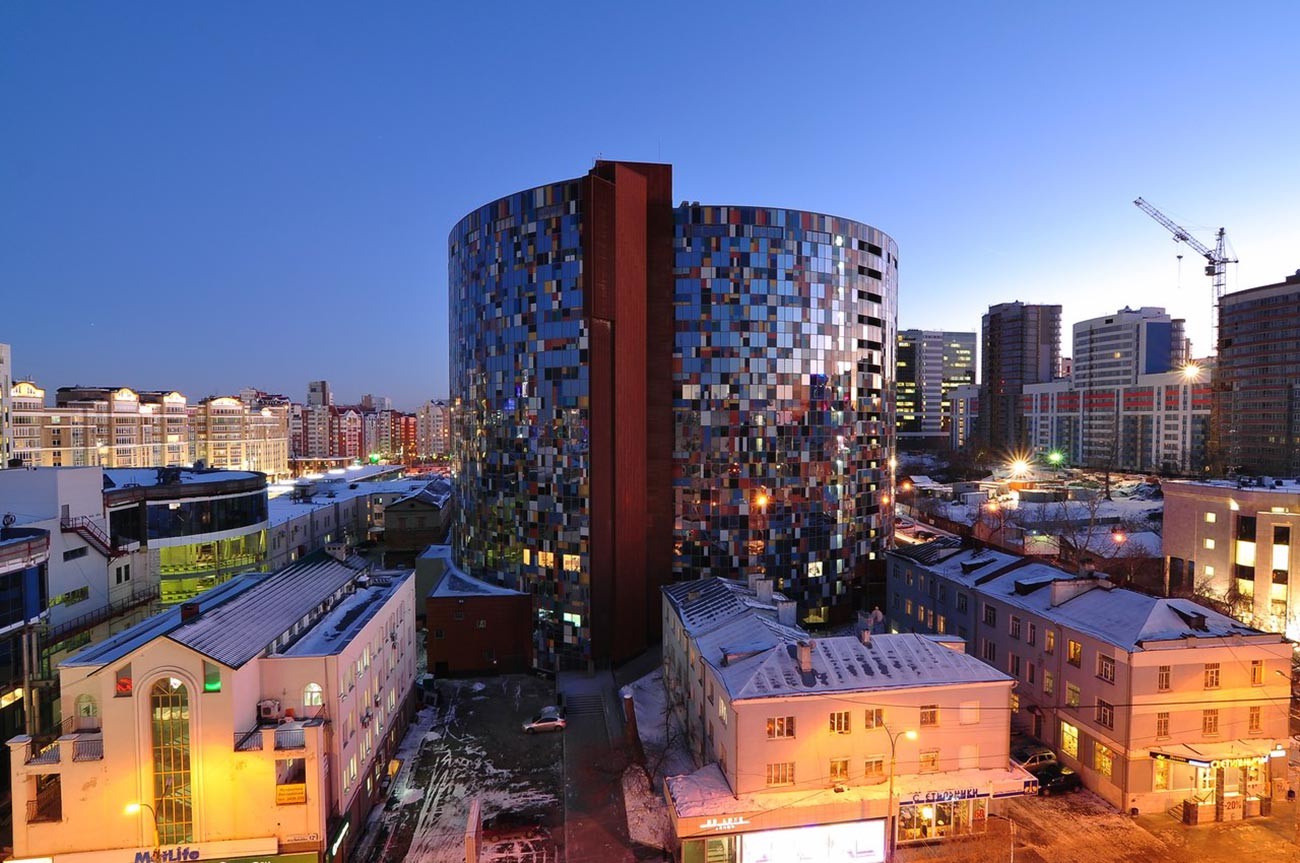 This circular-shaped modern building is so vivid and uncommon that it is hard to ignore for residents and tourists alike. This is due to multiple panels of different colors that create a quasi mosaic on its facade.

The designers of the building drew inspiration from the works of German modern artist Gerhard Richter. Just take a look at his ‘1024 Colours’ artwork and see for yourself. 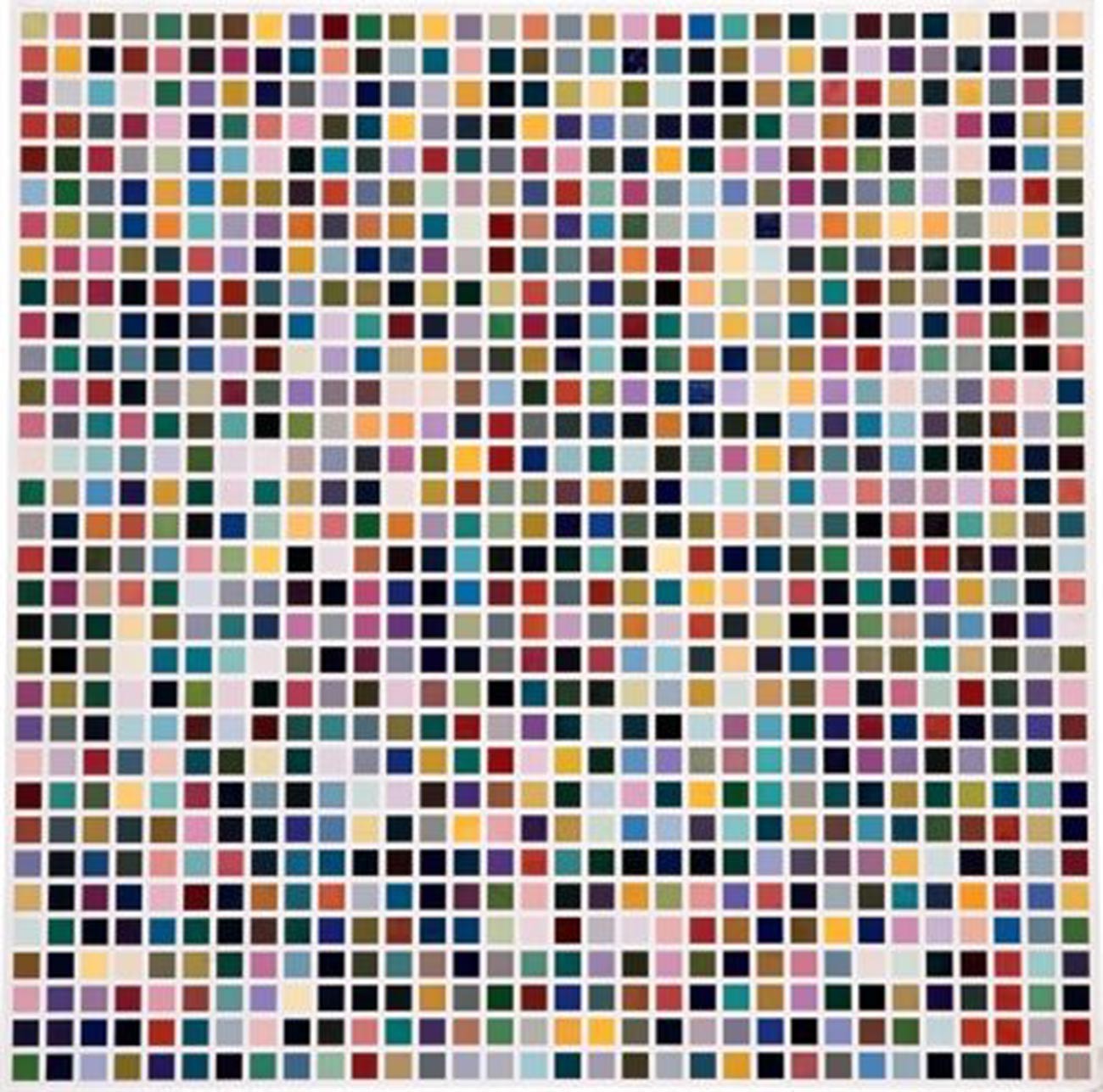 Click here for 10 most BEAUTIFUL buildings & sites in Sochi, another host city of the 2018 FIFA World Cup in Russia.