5 of Crimea’s most BEAUTIFUL beaches (PHOTOS) 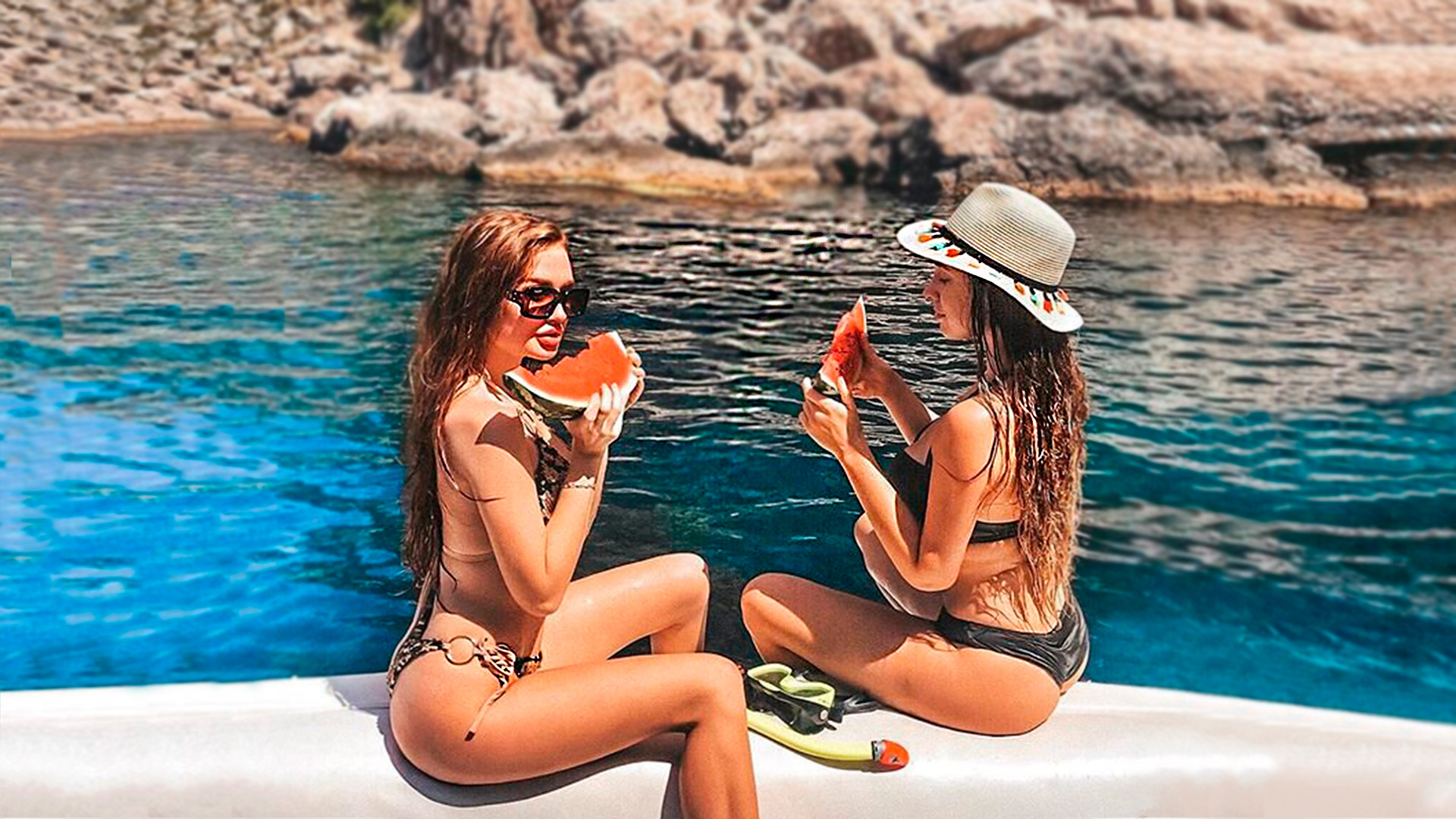 @christina_barmina
These beaches were popular holiday spots among famous Russian writers and members of the imperial family, while modern-day tourists come here in throngs from all over Russia. And it’s not surprising, really. 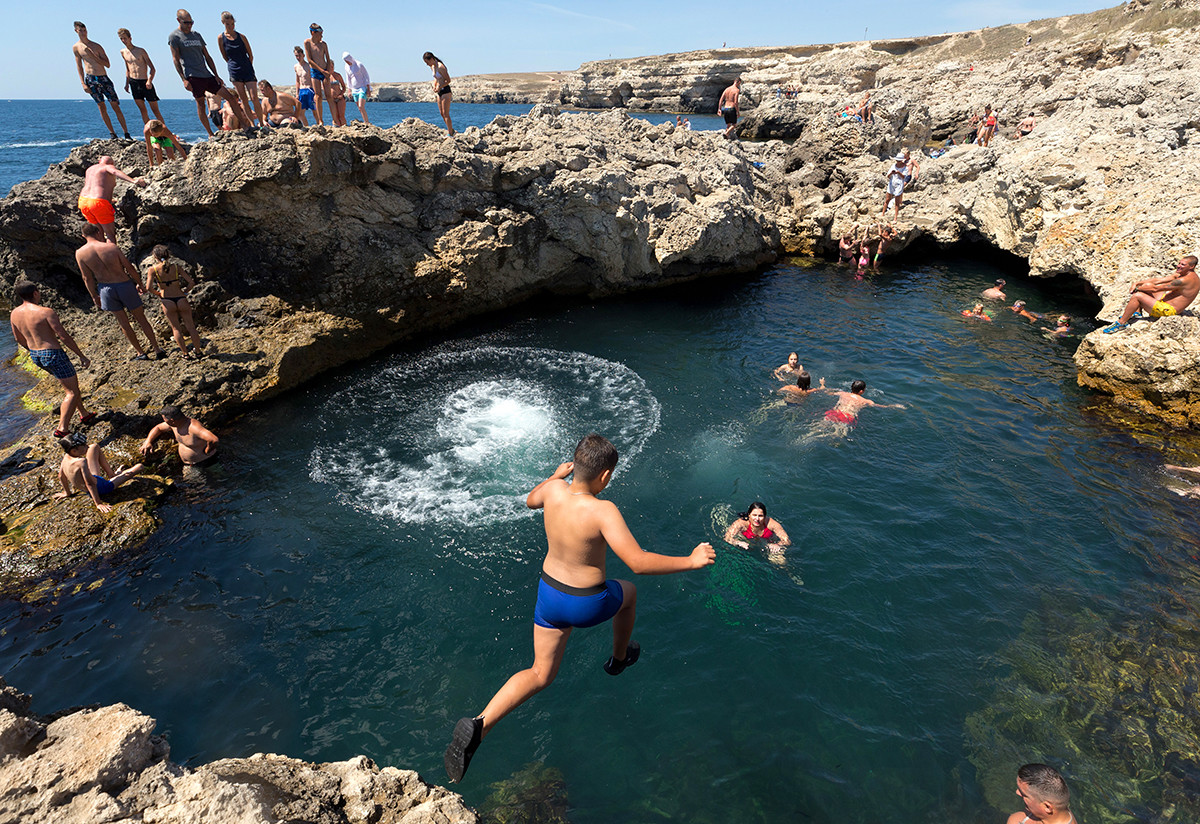 Republic Of Crimea. Cup of love at Cape Tarhankut

One of the cleanest beaches with clear water is located on the westernmost point of the peninsula, at Cape Tarkhankut. The water here is always clear and emerald in color, and is surrounded by cliffs with numerous tunnels and grottoes, which can be explored by boat. 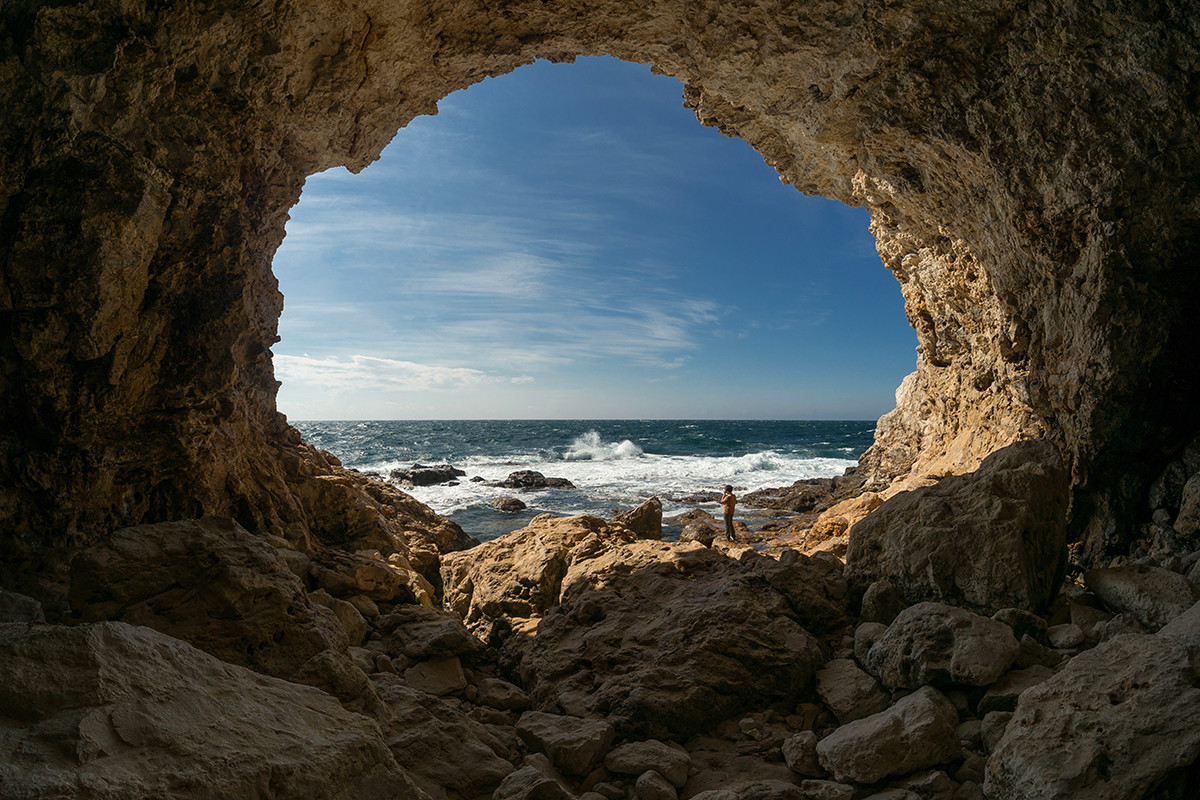 There are many unusual bays along this coast. One of the most popular places is called the Cup of Love: it is a natural pool surrounded by rocks 6 meters high. Lovers come there to jump into the pool, holding hands. According to tradition, if during the plunge they continue to hold each other’s hand, the relationship will last long and be strong. 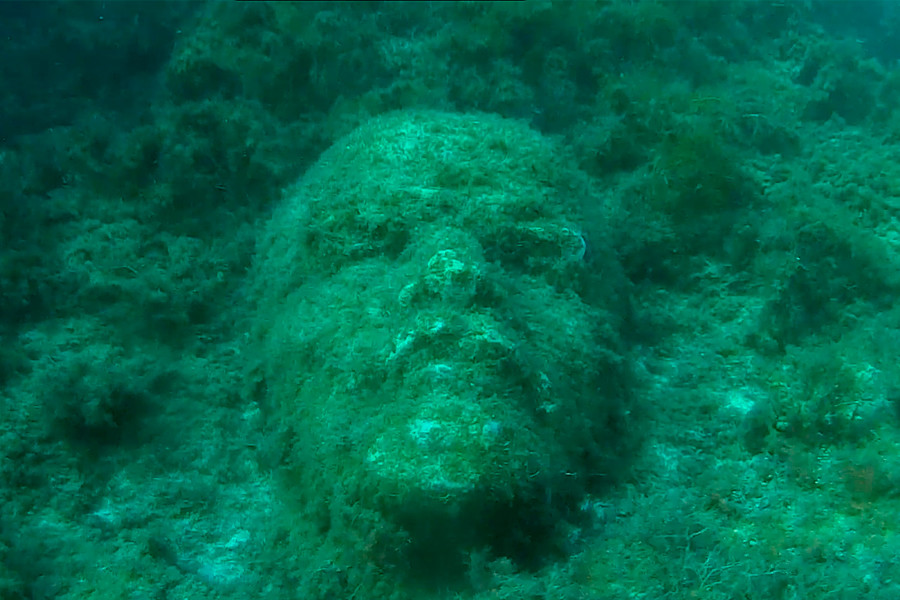 You can also take a 35-minute scuba dive with an instructor, exploring the world’s only underwater museum of leaders, where busts of Lenin, Stalin, Voroshilov, Karl Marx, as well as Russian poets and writers of the 20th century are exhibited at the sea bottom. 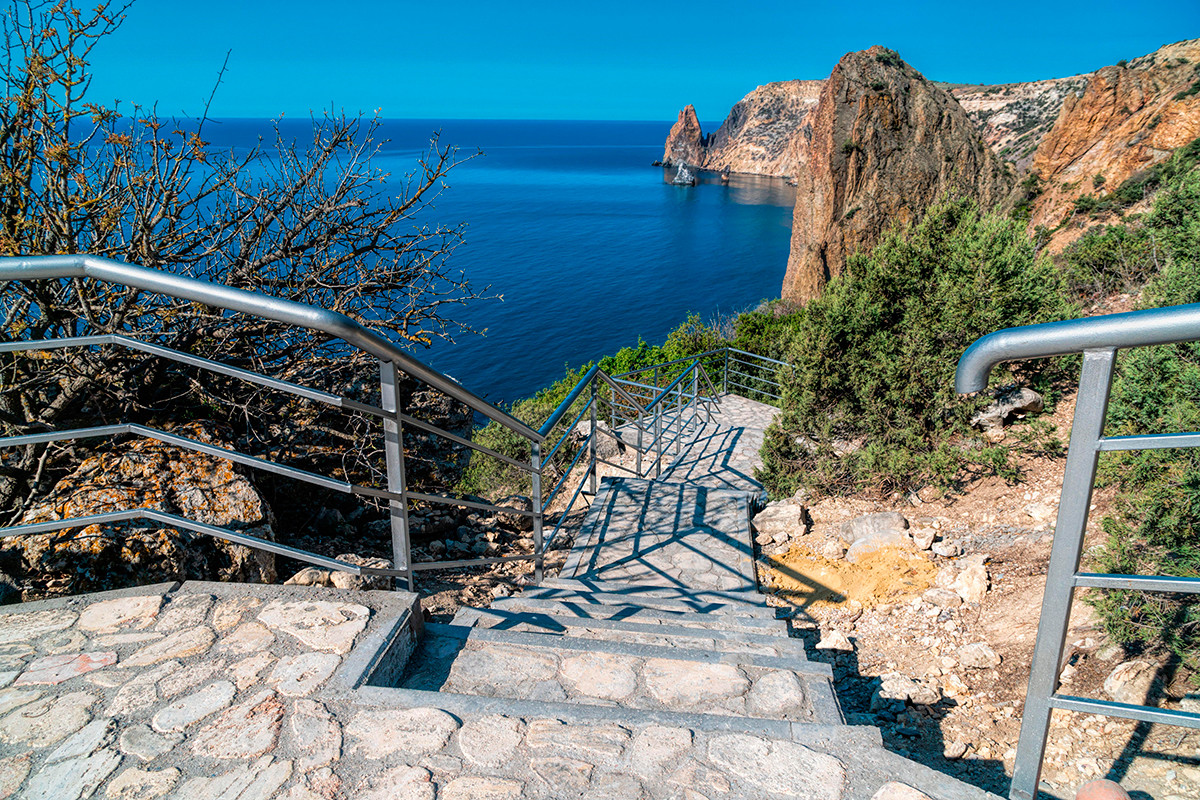 In Soviet times, one of the most beautiful and cleanest beaches in Sevastopol was a restricted area. From the mid-1950s, underwater missile launch tests were held near the beach. Also, according to popular belief, a secret base for training combat dolphins was located nearby.

In any event, in the 1980s, the testing ground was closed and the tests were stopped. In the 1990s, to get to the beach, one had to get a special pass issued by the commander of the local military unit. 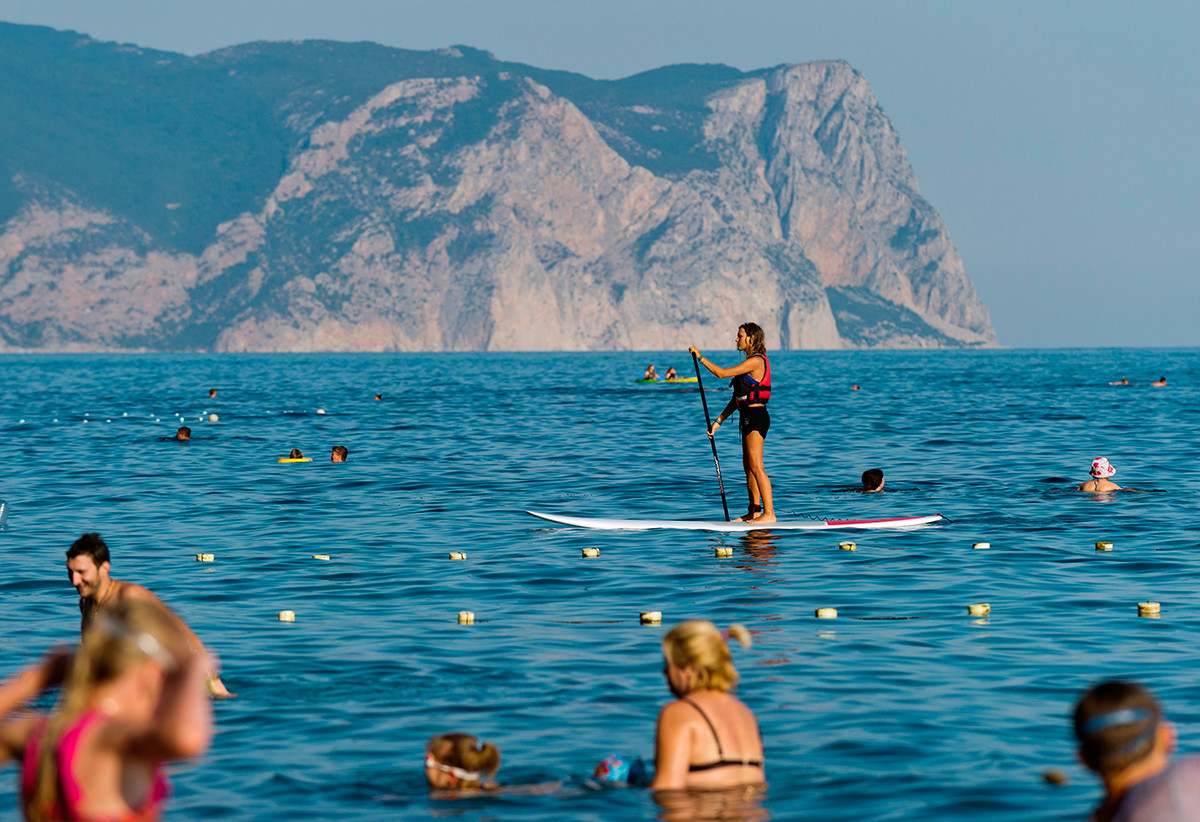 In the early 2000s, the beach finally became public. The path to the beach lies along 785 steps, which begin at the foot of the St. George Monastery. 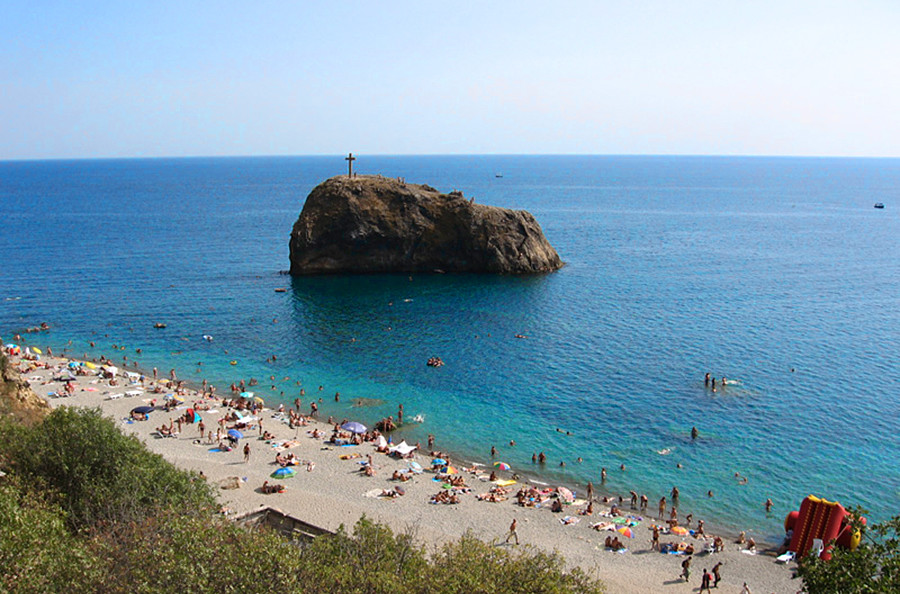 Rock of the Holy Apparition

Most of the 450-meter-long beach is covered with large pebbles, the seabed is covered with large stones, too. The Rock of Holy Apparition rises straight out of the water there. Legend has it that in the year 891, sailors were caught in a storm here and began to pray for salvation. At that moment, they claimed to have seen St. George the Victorious over the water and the storm immediately subsided. Later, in honor of this event, the Greeks built a monastery on the shore and a cross was erected on the rock. 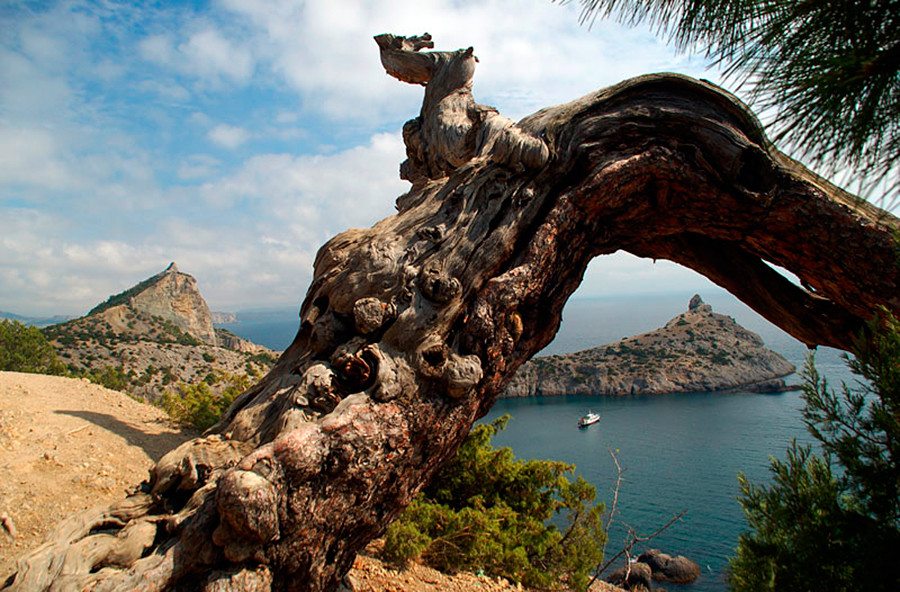 In 1912, Emperor Nicholas II paid a visit to the village of Novy Svet. The beach was named after him - according to legend, it was on this beach, located in Blue Bay, that members of the imperial family went to swim and relax. 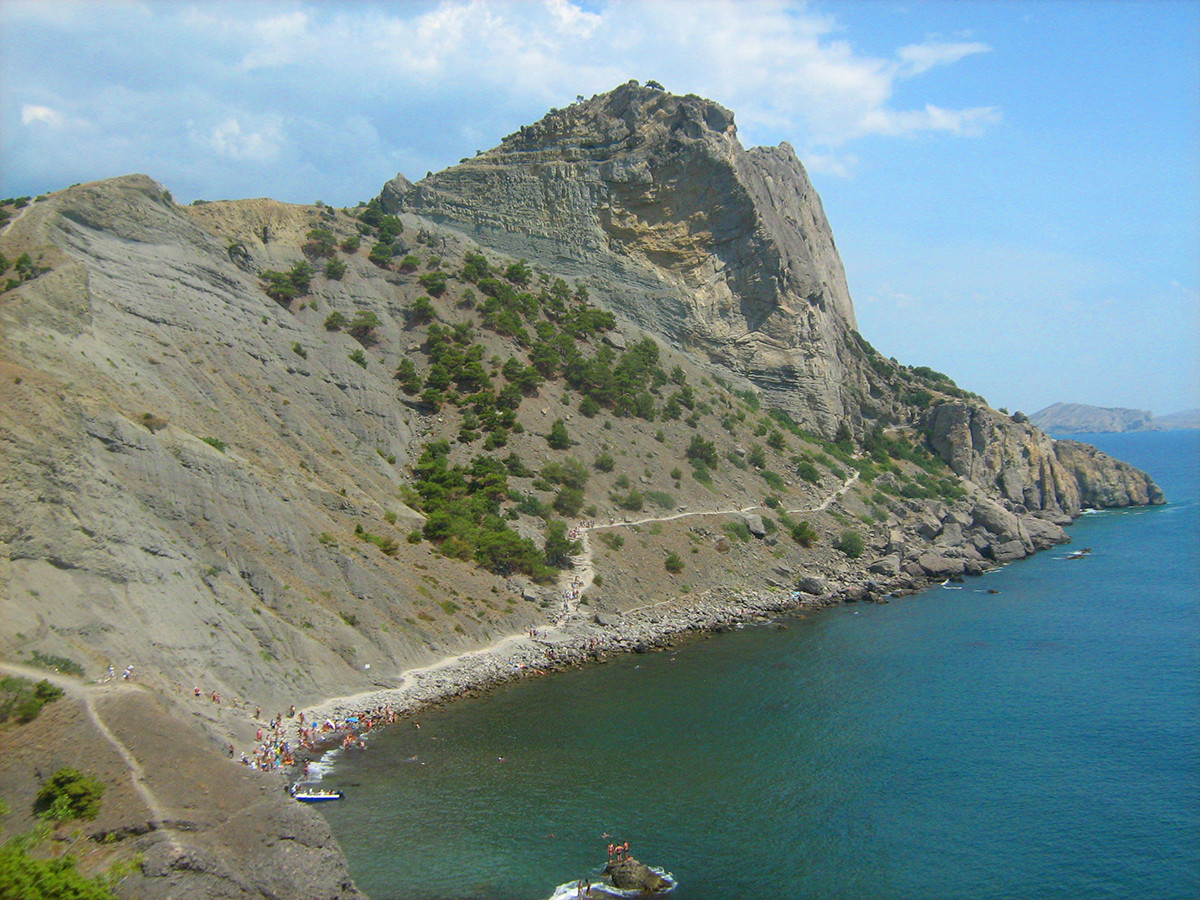 Officially, the beach is now closed to the public, but locals still take tourists there on yachts and boats. On both sides, the beach is hemmed in by two capes; the higher one of them, Cape Kapchik (to the left as you face the sea), can be reached on foot. 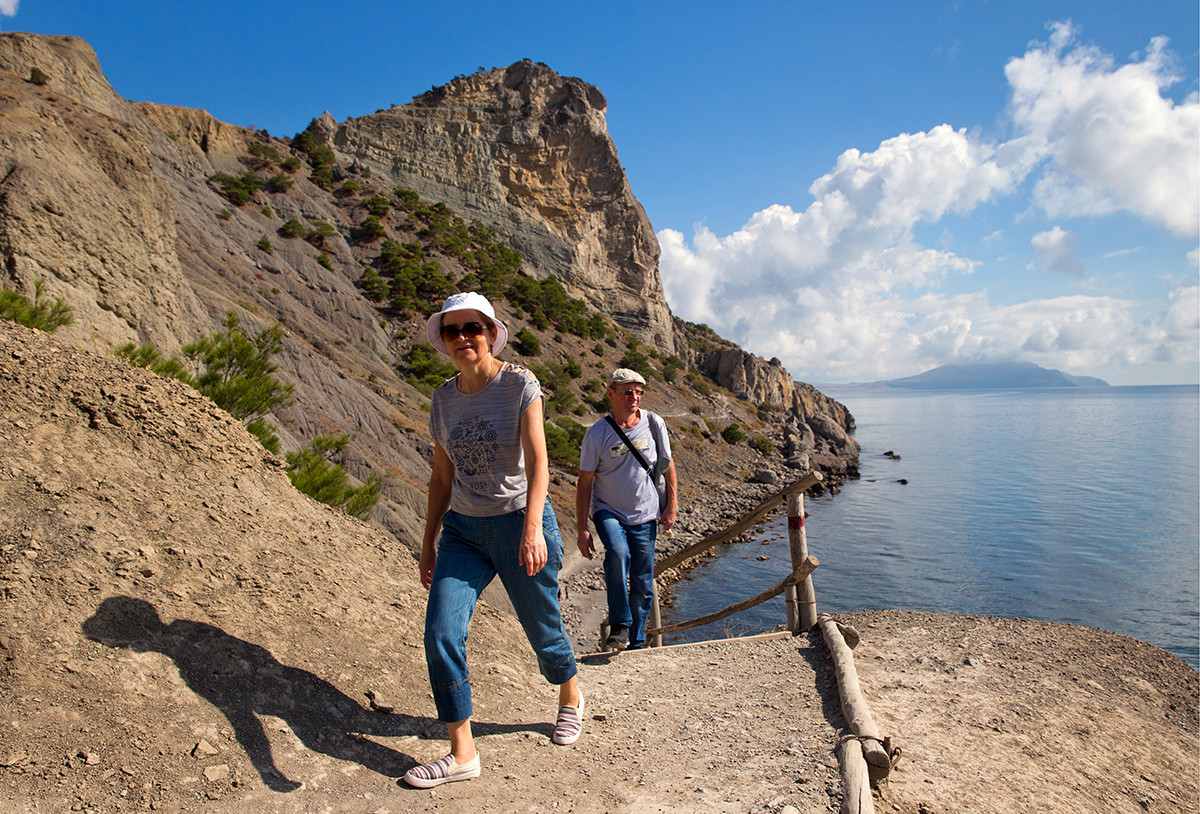 The Golitsyn trail begins at the cape, which was created in 1912 by order of Prince Golitsyn for the arrival of the tsar. The 5.4-kilometer-long mountain path offers stunning views of the local bays, Tsar’s Beach and the entire Novy Svet. 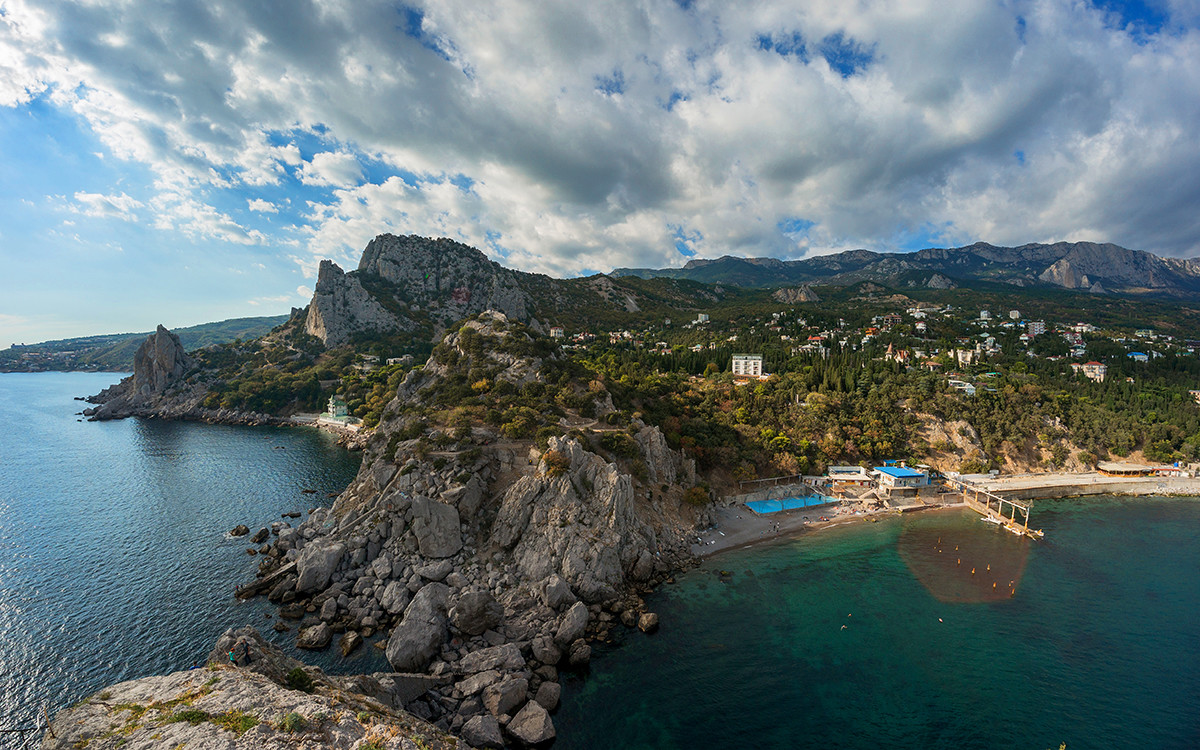 In fact, this is not so much a beach as huge boulders located near Rock Diva, which can be reached by walking down along a steep rocky slope.

The boulders divide the coast into small secluded bays, which are popular with nudists, away from prying eyes. 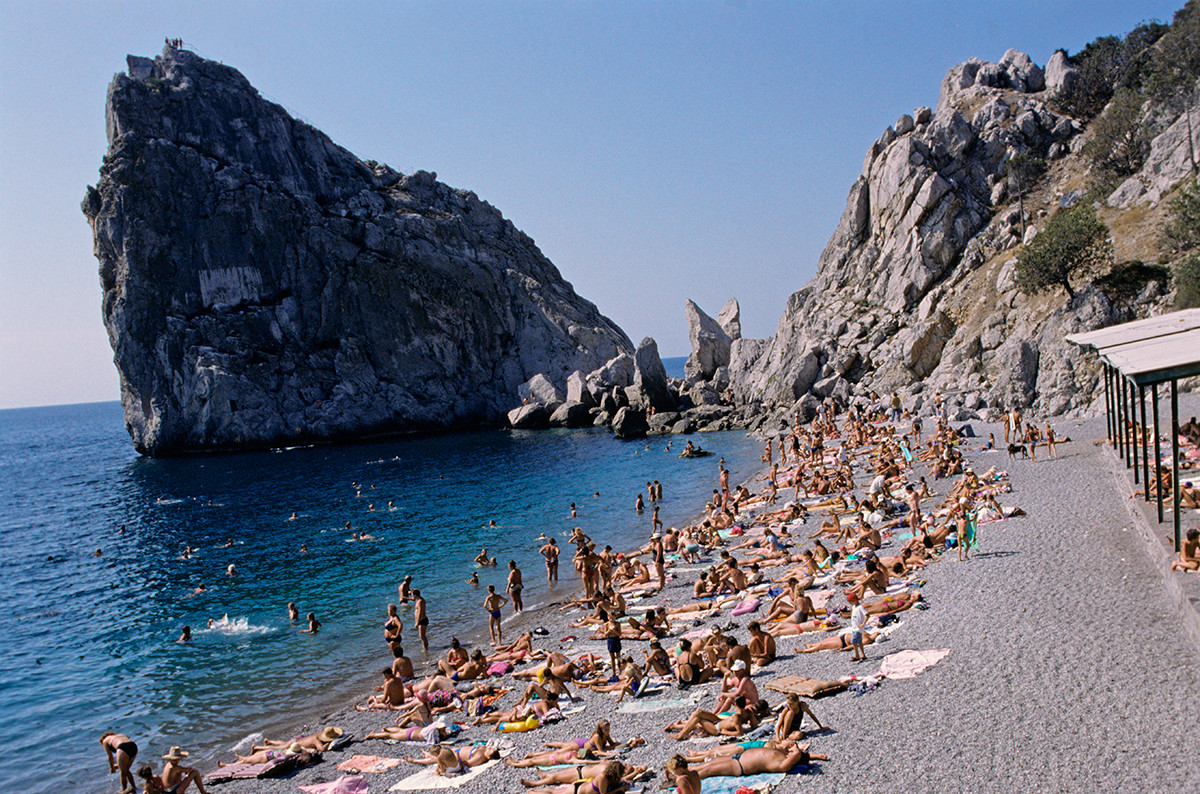 Also, tourists love cliff diving from the boulders straight into the sea and watching algae, fish and underwater stone labyrinths through the thickness of the water. 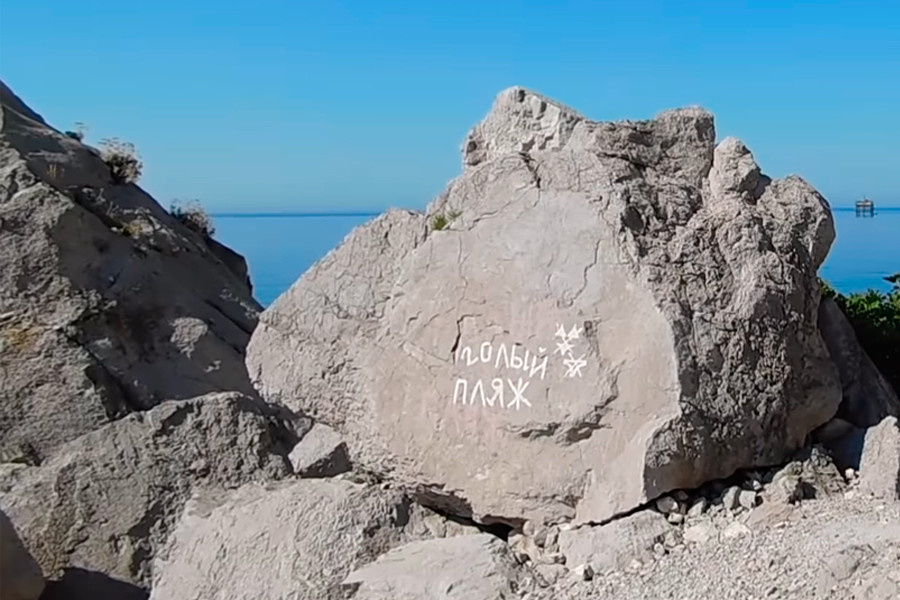 They also say that this beach is popular among the LGBT community. 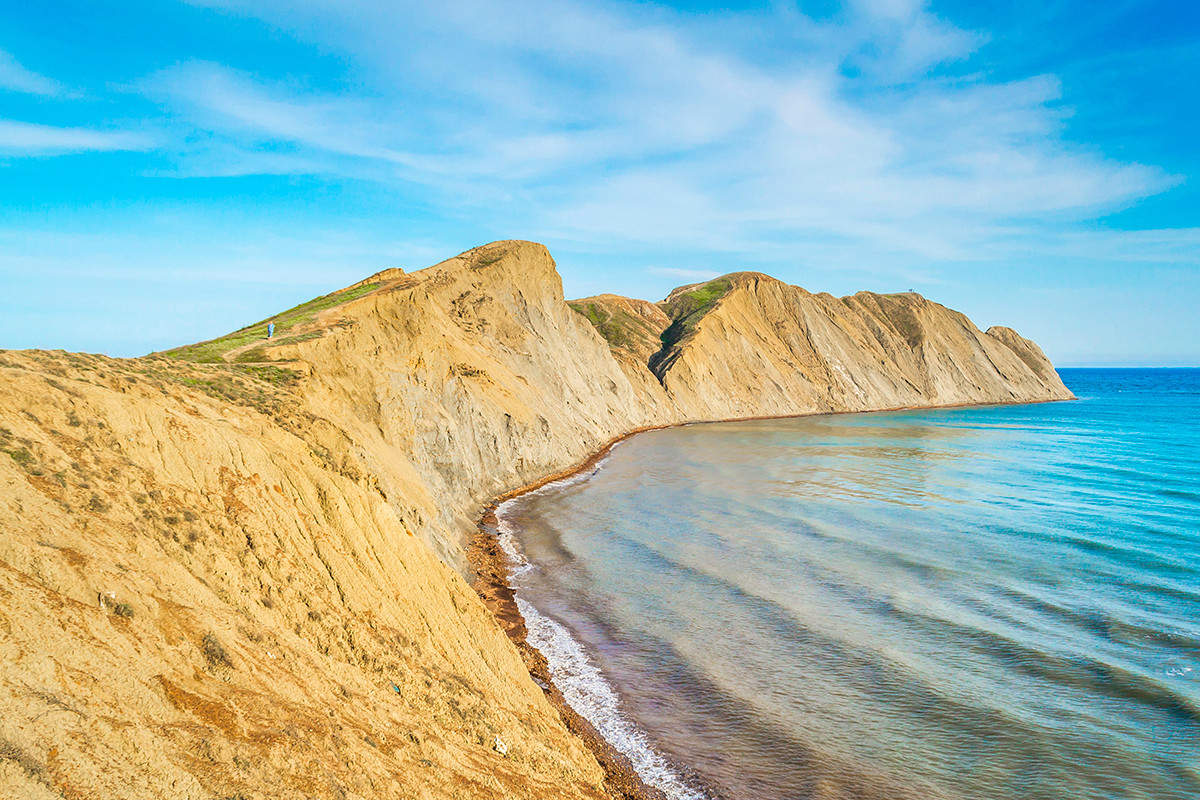 This long arc-shaped bay fully justifies its name – near the shore, the sea here is almost always calm. The 3.5-kilometer-long beach overlooks Cape Chameleon, which - depending on the time of day - can change its color from purple to golden orange. 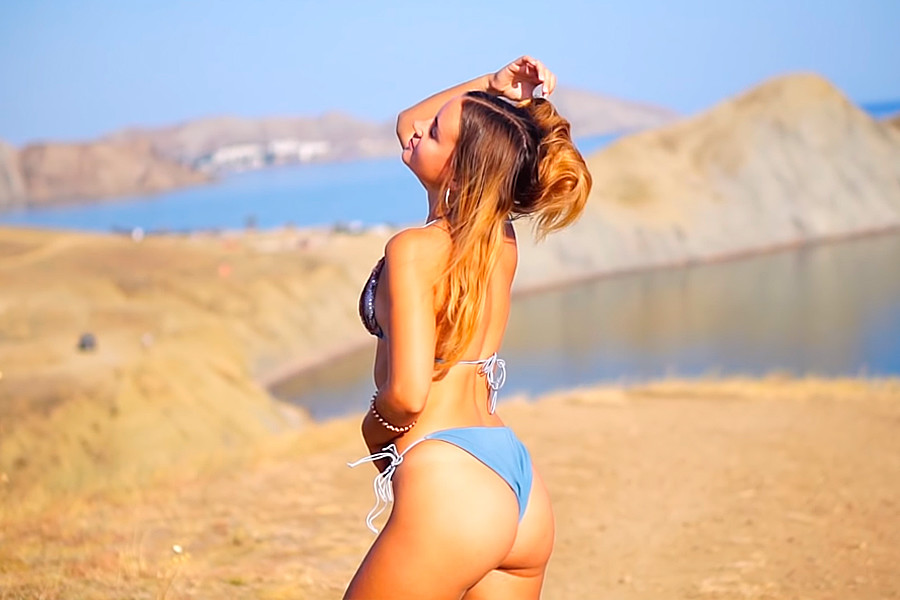 At the Edge of the World/youtube.com

In the 20th century, this bay served as a holiday destination for Nikolai Chukovsky, Nikolai Gumilev, Mikhail Bulgakov, Marina Tsvetaeva and other famous poets and writers. In the 1920s and 1930s, Russia’s first pilot school was opened on these hills. These days, scores of tourists set up their tents on the shore of the bay to spend as much time as they can on this beach. 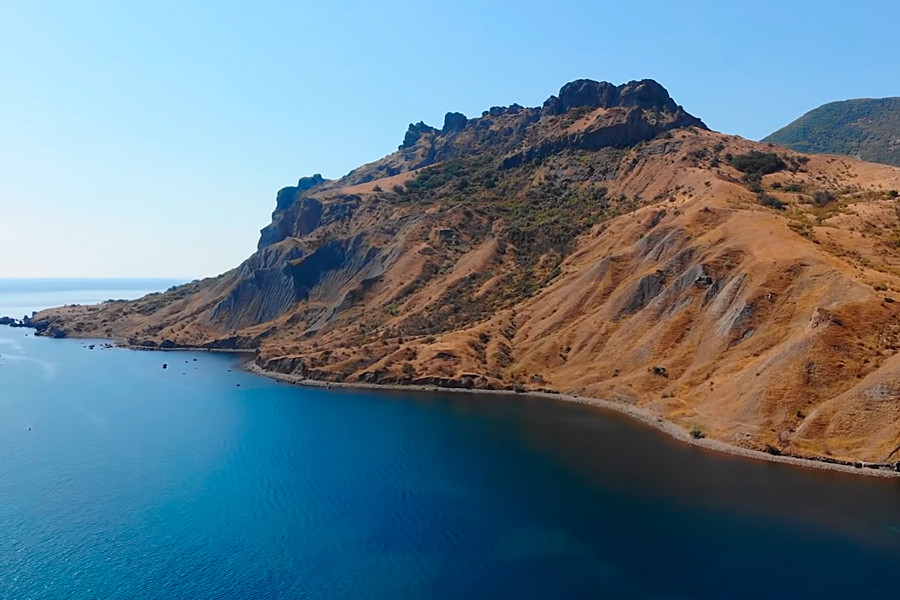 At the Edge of the World/youtube.com