Getting back home to Russia: The 2020 edition 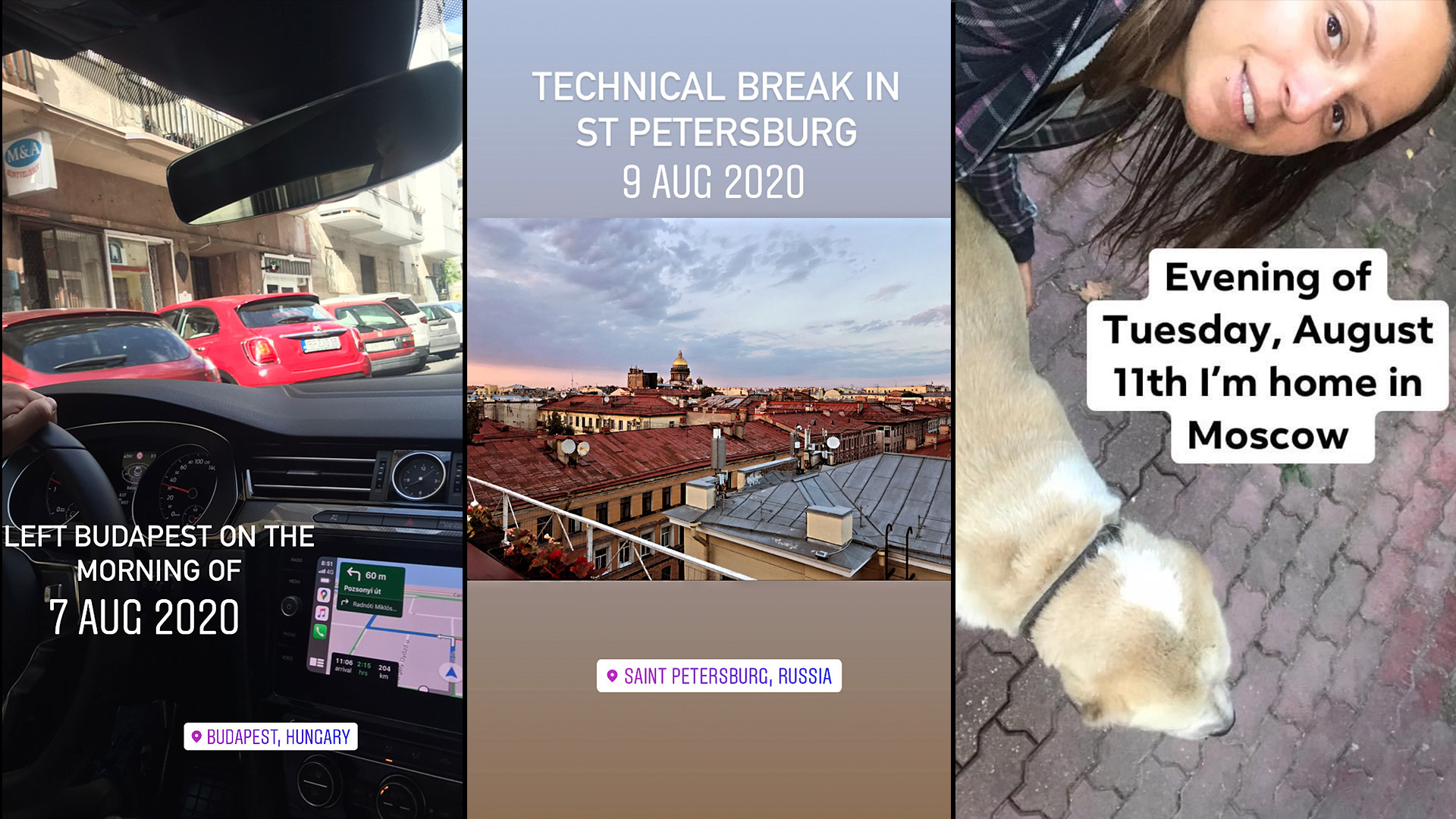 Maris Stambler
Our own social media manager, who is a Russian citizen with a EU residence permit, recounts her the horrors of her long trip back to the Motherland and about international travel in general in 2020.

A direct flight from Budapest to Moscow normally takes about 2 hours and 15 minutes, costs anywhere between €20 and €150 (depending on the season, airline and how far in advance you book) and there are normally 4-7 flights per day. Needless to say, for the most part of 2020 so far, getting from A (Budapest) to B (Moscow) was either almost impossible or far from straightforward and quick. 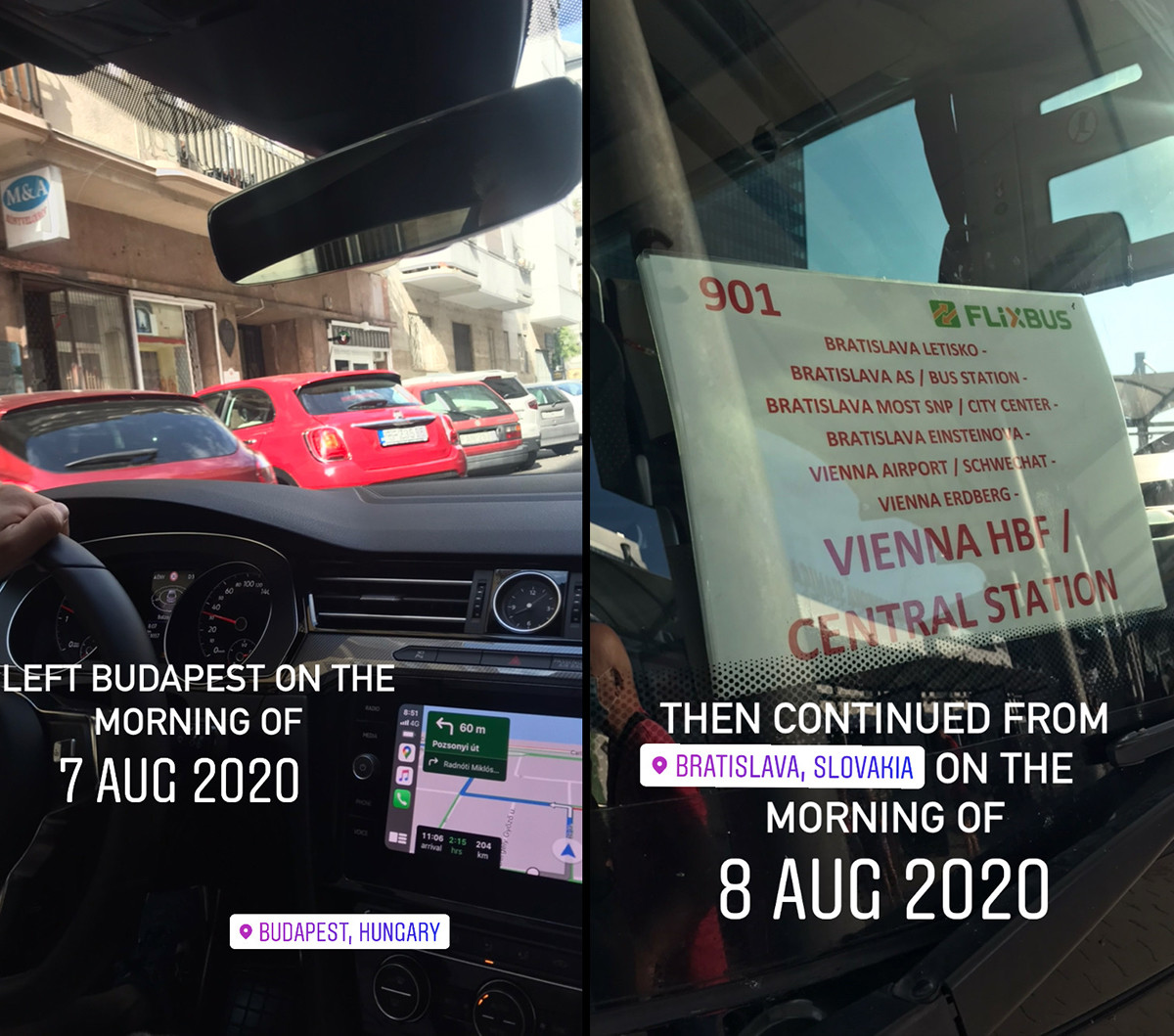 Before continuing, I would like to preface this account of getting back to Russia by explaining that I am a seasoned, control freak traveller. But 2020 has taught me to be flexible, highly creative and unusually spontaneous, which in a way sort of prepared me for the saga that returning home turned out to be.

Baltics to the rescue

After having three flights cancelled that were scheduled for the beginning of August and the constant postponing of the day the borders between the EU and Russia were to reopen, I realized that if I wanted to make it back before the second wave potentially struck with everyone being locked up at home again, I’d need to think outside the box - and fast. After researching some obvious options, the only mildly feasible way to get back home was to zero in on the Baltic region as my gateway to Russia.

Some sort of bus service had resumed between the capitals of Riga and Tallinn and Moscow and St. Petersburg. What was highly discouraging, though, is that the bus from Riga/Tallinn to Moscow would take 18 (!) hours with a 3-hour stop at the border in the dead of night. So, I warmed more to the shorter Tallinn to St. Petersburg route, but again, something that is normally a 6-hour drive mutated into an 11-hour affair, because the border crossing would, supposedly, take 3 hours between 1 am and 4 am.

But what, in theory, would stop me from attempting the Tallinn to St. Petersburg journey on my own? From things I read on various online forums, you could actually walk from Narva (a 3-hour bus ride from Tallinn) to Ivangorod (a 2.5-3-hour drive from St. Pete’s) over a small bridge across a little river that separates the two countries. So, in theory - nothing, in practice - who knows? Rules about leaving the EU and entering Russia “in the time of corona” are vague and not always consistent. I called consulates, I called border patrol stations, I called Rospotrebnadzor (the Federal Service for Surveillance on Consumer Rights Protection and Human Wellbeing in Russia) in Leningrad Region, I called the city administration in Ivangorod to see if I can get in, because it’s a high security border town and not just about anyone can come in without a special permit. Maybe I should have also called a priest to ask for his blessing for this journey?

So after getting somewhat coherent information, I decided that whatever happens happens, this has already been an interesting year, so why not let things get a little more wild. From Vienna, I found super cheap flights to Tallinn, but they were quite early in the morning and there were no buses from Budapest to Vienna Airport that would get me there on time. So the final route ended up looking like this: Budapest-Bratislava-Vienna Airport-Tallinn-Tallinn Bus Station-Narva-try walking over the border to Ivangorod and hope for the best-somehow get to St. Petersburg and figure out the rest from there. 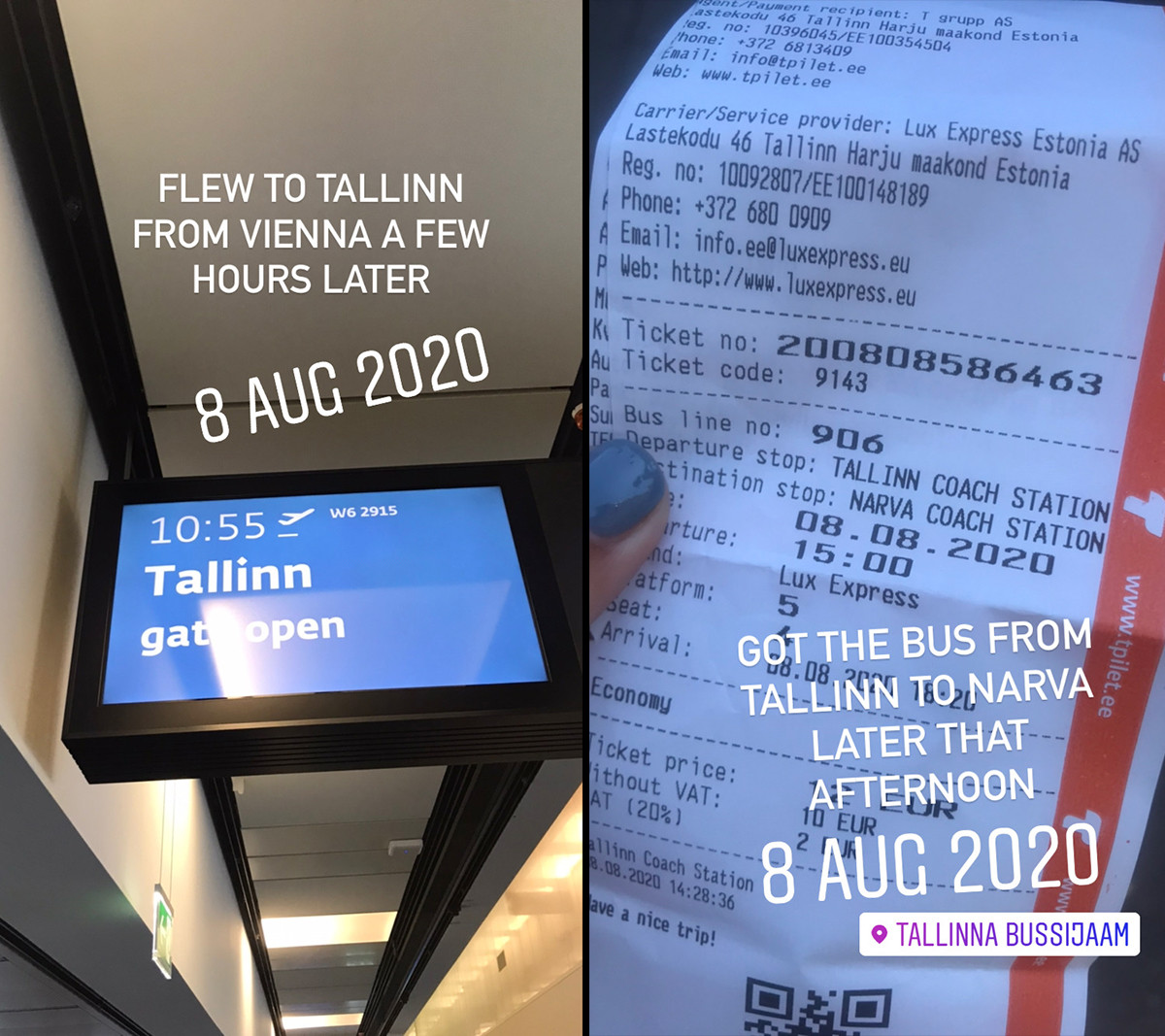 I got my negative COVID test and the journey started on the morning of August 8th with a drive from Budapest to Bratislava and an overnight stay in the Slovak capital. The morning of the 9th, I got the bus to Vienna Airport and everything was going pretty smooth until I got to Tallinn.

Being a resident of the EU, you very quickly get used to not having borders – you just show up and are let in, no questions asked. Once you get used to something good, it’s kind of hard to go back. Everyone getting off the Vienna flight was “greeted” by Estonian police wielding guns and immigration officials who informed them that if staying in Estonia, you had to undergo a mandatory 14-day quarantine. I was shocked and mortified that something so simple, something that we have all heard about non-stop this year, I had not taken into account or bothered researching… for a hot minute, I was sure my well-hatched plan would end right there and then and I’d spend the next two weeks cooped up all alone in an apartment somewhere in Estonia.

I began explaining to the police officer that I had no plans to stay in Estonia, that I was just trying to get back to Russia, that I had a negative COVID test on my person and luckily, at that point, Estonia was waiving the mandatory quarantine for Russians who were just transiting back home. So I ran out to grab my suitcase and jumped into an Uber as fast as I could, in case they decided to change their mind. I got to the bus station, got a ticket for the next bus to Narva, drove for about three and a half hours and disembarked the bus in the center of town.

You could immediately identify who was here to get back to Russia. Myself and 5 other people got off the bus and pulled their phones out straight away to look at the map and figure out which way the border was. I started chatting to one such guy and it turned out he had made his way from Munich (he was even on the same Vienna-Tallinn flight as me). Another man and his son had come all the way from Spain and the third guy I wasn’t sure. The walk from the center of Narva to the border is very short and pleasant, you can even get a good look at the town’s magnificent fortress.

We reached the Estonian-Russian border and the moment of truth began; I had done all kinds of reading and called all kinds of authorities, but nothing that I had found out was a guarantee that I’d be let out of the EU and into Russia. The Estonian side first tried to dissuade us from going, warning us that they did not know if the Russians would let us in and that we could then be sent back and would be “loitering” in their town (of course, no one would be loitering, we all had EU residency permits or passports, so we’d be there legally - but I digress). Then they cranked up the fear factor by saying that the Russians might not let us back out later (well, that was our problem, really, and we’d cross that bridge when we got to it, no pun intended). But after a bit of huffing and puffing, the Estonians eventually let us through.

It was a beautiful sunny day with a soothing breeze coming in from the Baltic Sea, which calmed my nerves throughout the 2 minutes that it took to cross the Friendship Bridge over to the Russian side – the side that I dreaded the most and thought would be a lot more uncertain because of stories I had heard of people returning being sent to mandatory quarantine with or without negative COVID test. But, to my surprise, the Russian side was pretty relaxed, no one shouted at us, we had to fill in a quick form with our contact information, wait for the doctor from Rospotrebnadzor to come and check our medical tests (those who did not have them had to sign a paper that they’d get tested within 72 hours and upload the results online or self-isolate at home for 2 weeks) and then go through passport control. 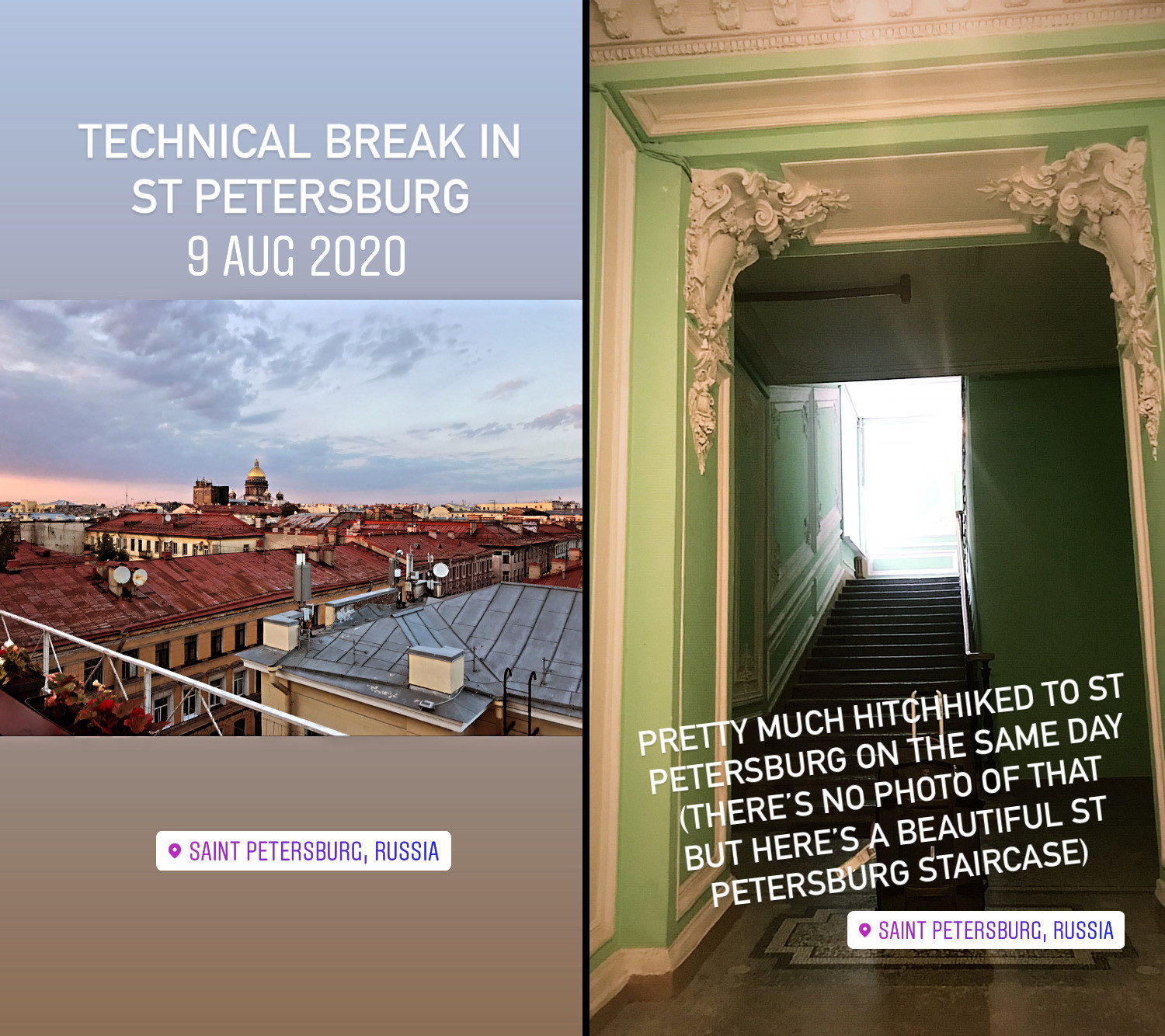 So there I was – a person who quite literally walked home to Russia. I couldn’t quite believe that it had worked, I was sure that something would go terribly wrong, or something critical would not have been foreseen. It makes for quite the story in Russian, because the verb “to come” can depend on how you came (on foot or by transport) so it’s quite a difference when you say “я пришла в Россию” (“walked”) as opposed to “я приехала в Россию” (“drove/flew/rode”). To be fair, it also makes for quite the story in any language, because pulling this off was quite the feat. And that’s where my plan ended: the only thing I needed to do was get to Russia and the rest I would have to figure out along the way. I couldn’t hang around in Ivangorod because, as already mentioned, even Russians needed a special permit to be there. So after taking a moment to catch my breath, it was time to start hustling again. 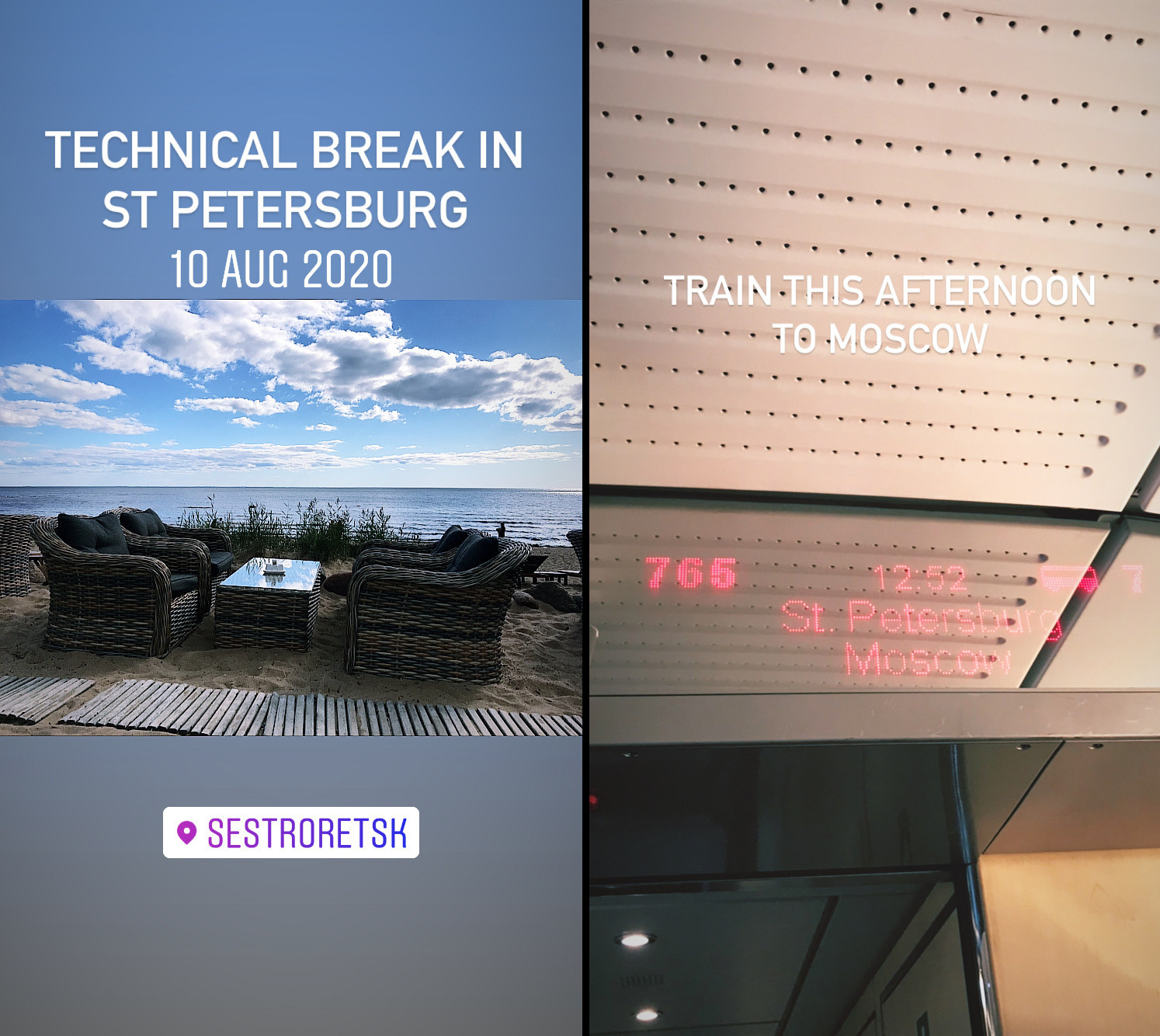 Luckily, the guy who had come from Munich had his mom waiting for him and they were heading to Sestroretsk, a suburb of St. Petersburg. I hitched a ride as close to town as I could, then hopped onto a marshrutka (“shuttle bus”) to the nearest metro station, which was Nevsky Prospekt, and on the spot found some sort of basic accommodation for the night. After a journey like this a technical break was needed, so I spent two days in St. Petersburg catching up with friends and enjoying unusually amazing summer weather by the Neva River. And finally, on August 11, 5 days after getting in the car in Budapest, I arrived in the evening with the Sapsan speed train to Moscow, just in time for dinner. 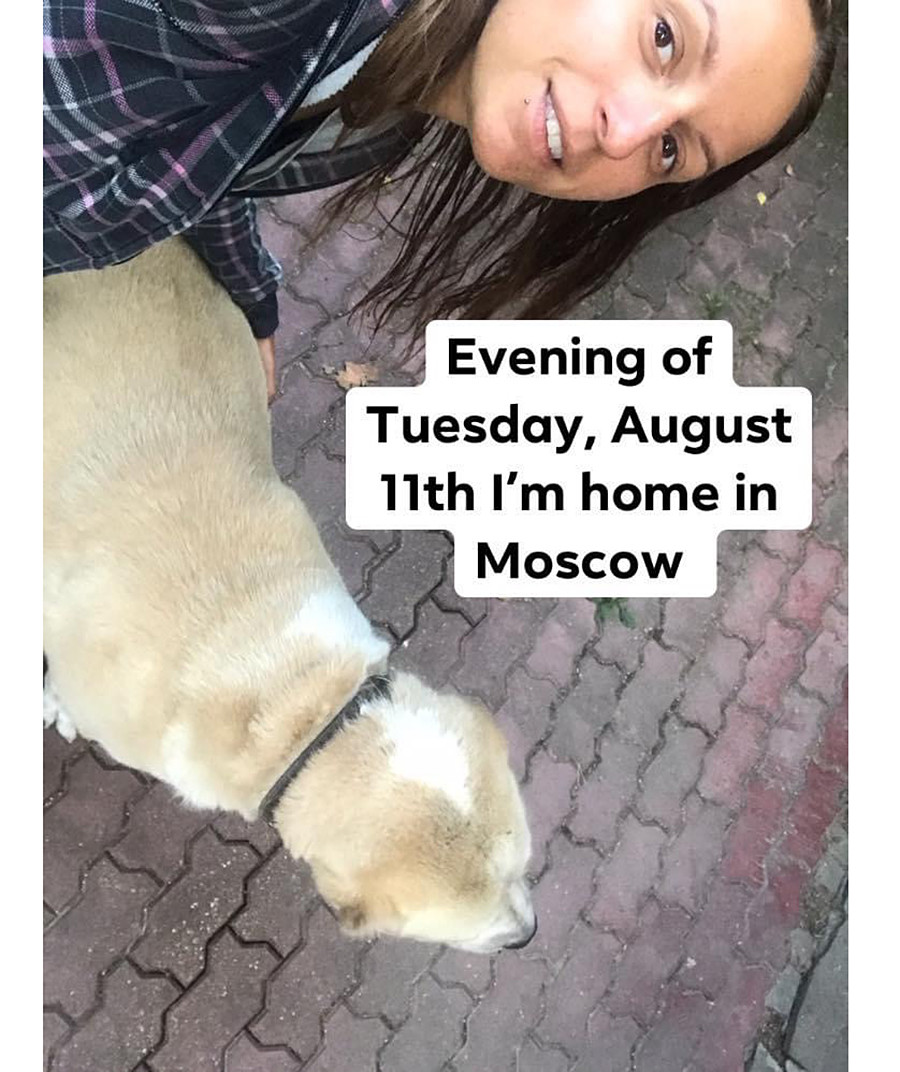 Though the idea of such a journey was at first daunting for a control freak like me, because so many things were out of my control, it actually turned out to be a lot of fun. Will this laissez-faire approach to travelling stay with me once this COVID chaos is over? No idea. But it was certainly a humbling exercise that taught me that I can’t possibly have everything under control and that’s totally fine. Kick back, relax, enjoy the ride and eventually you will arrive somewhere!