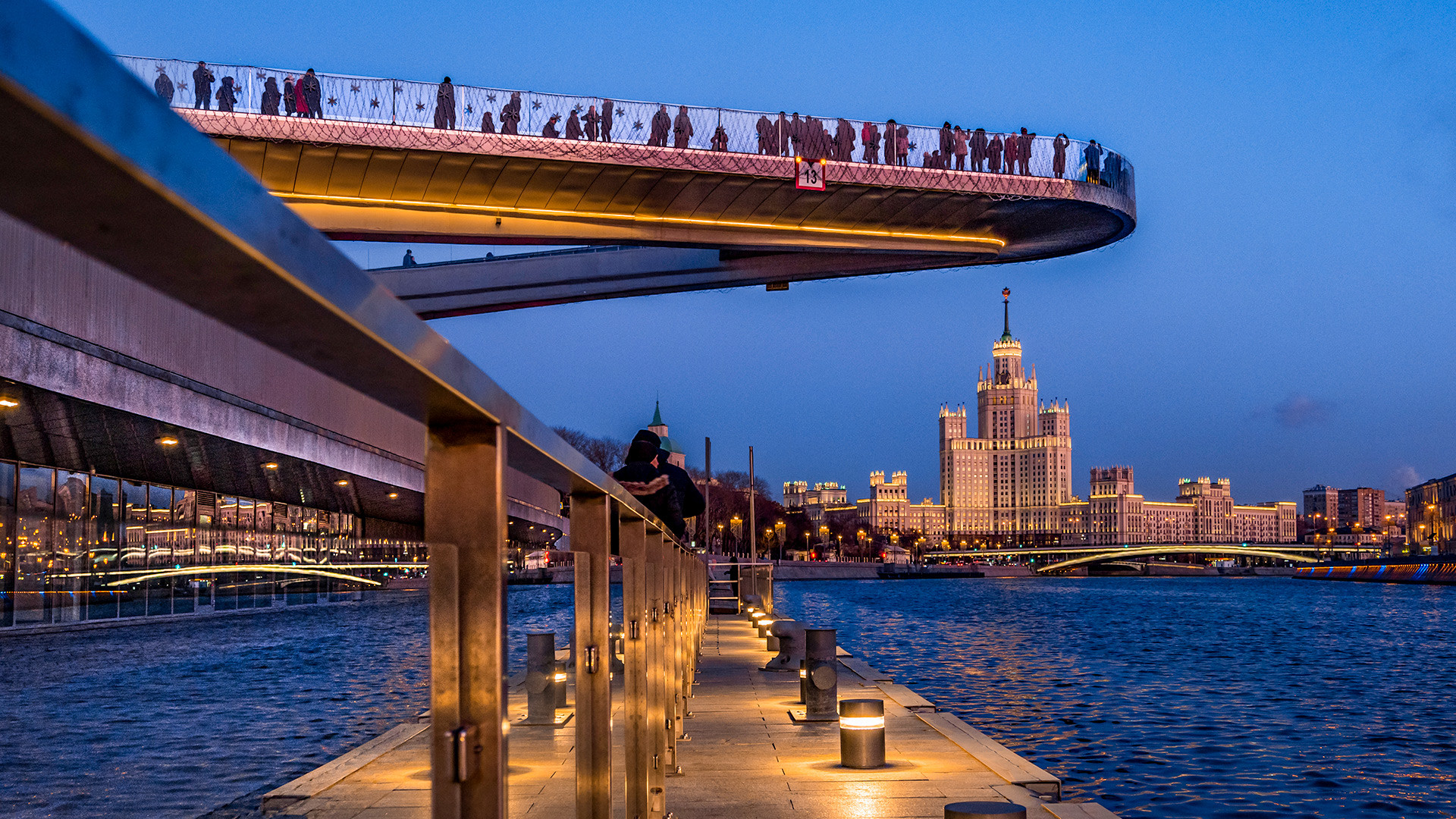 Konstantin Kokoshkin/Global Look Press
Streets lit up with glowing wreaths, jolly restaurant areas, cozy boulevards - Moscow never sleeps, you’re well aware of that by now! Here are some great ideas for the most romantic night walks in the Russian capital. 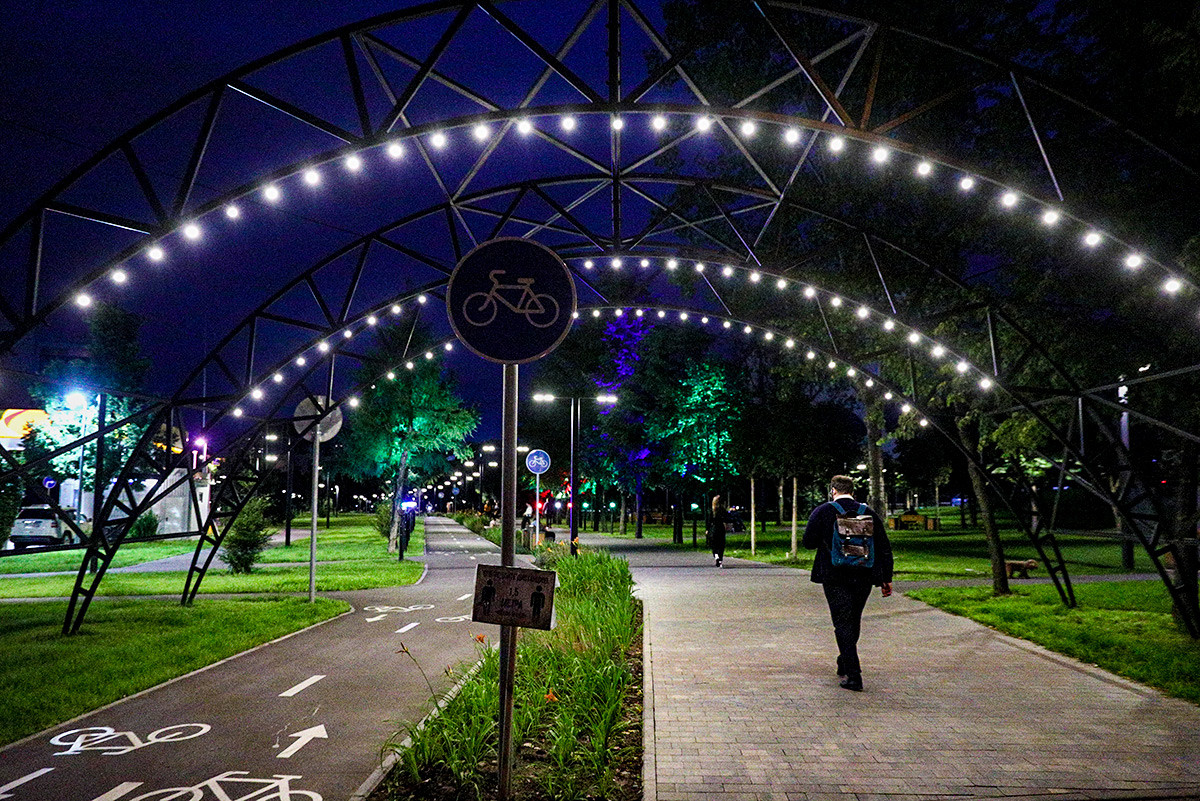 The new park in the Bibirevo district, in the north-east, opened in 2019. It’s as if it was designed especially for night walks. After sunset, the park comes alive with an unusual fluid light display on swings, arches, walkways - basically everywhere, turning an ordinary park into an enchanted forest. Backlit sphere, star and cylinder-shaped benches can also be seen everywhere in the park. 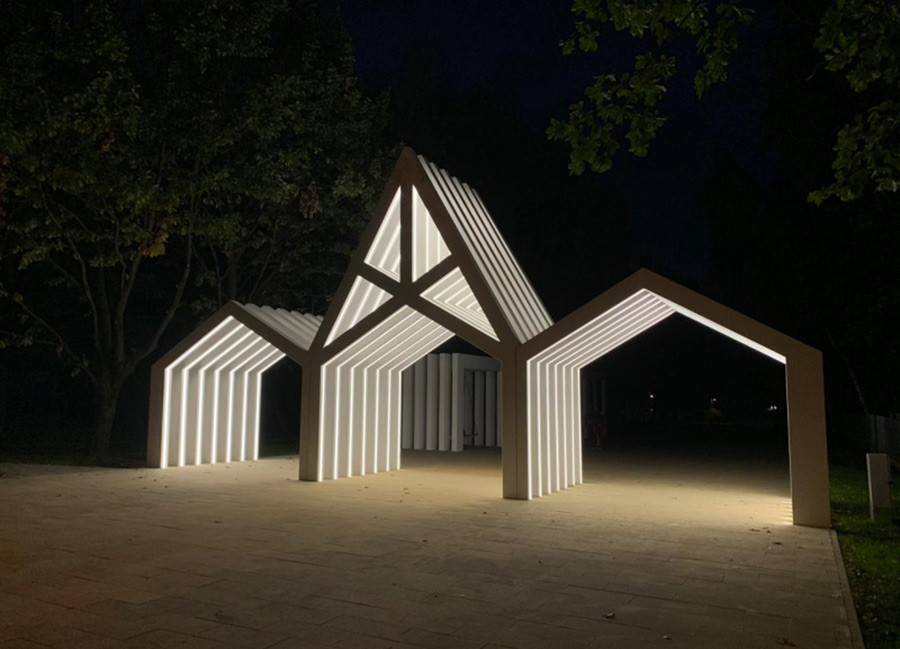 Another cozy park in one of Moscow’s northern ‘sleeping’ districts, which is fantastic to behold after sunset. It’s all about the humongous modern-style arched gates, which turn blinding white at night, illuminating the surrounding area. You definitely won’t get lost here! 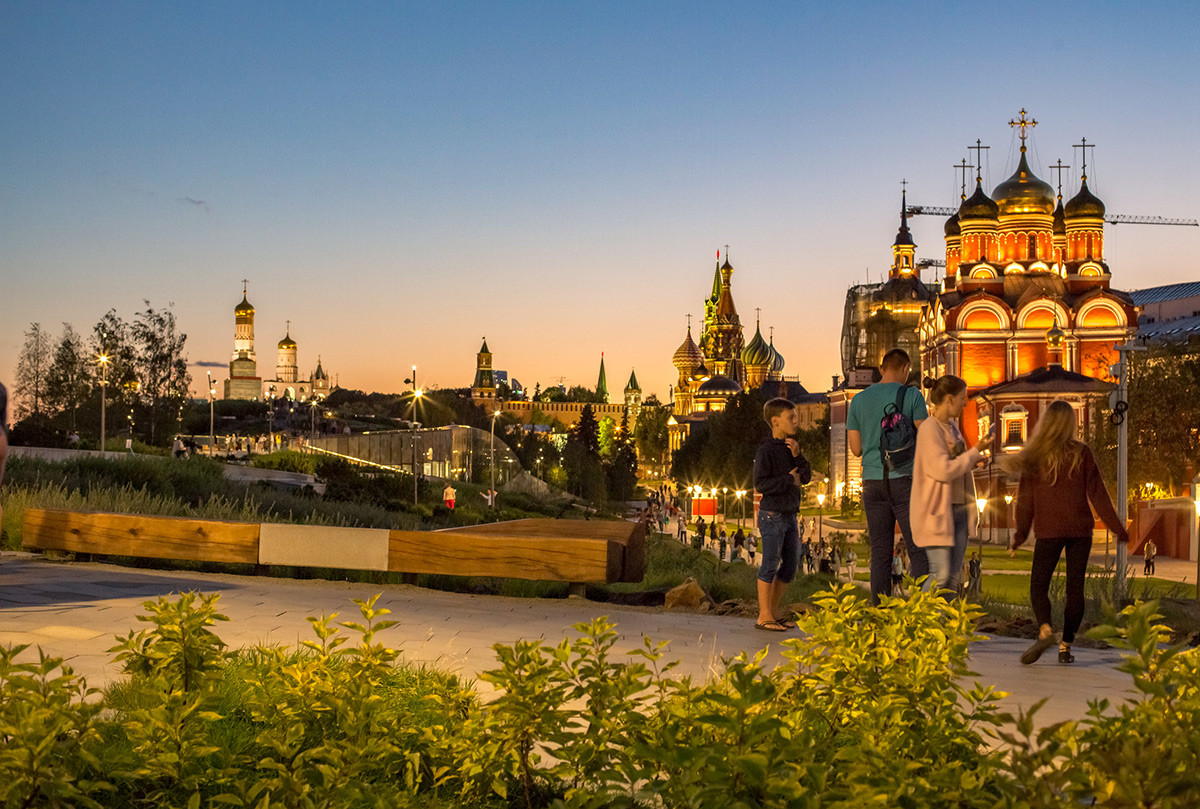 One of the most popular places in the capital, the Zaryadye Park, just in the shadow of the Kremlin, looks especially festive in the evening. The floating bridge lights and the roof of the amphitheater can be seen from hundreds of meters away. The elegant backlight also decorates the ponds and various pathways and lawns that dot the area. Taking a walk along the backlit Moscow River embankment with the Kotelnicheskaya Embankment ‘vysotka’ (aka one of the ‘Seven Sisters’) as a backdrop - what could be more romantic? 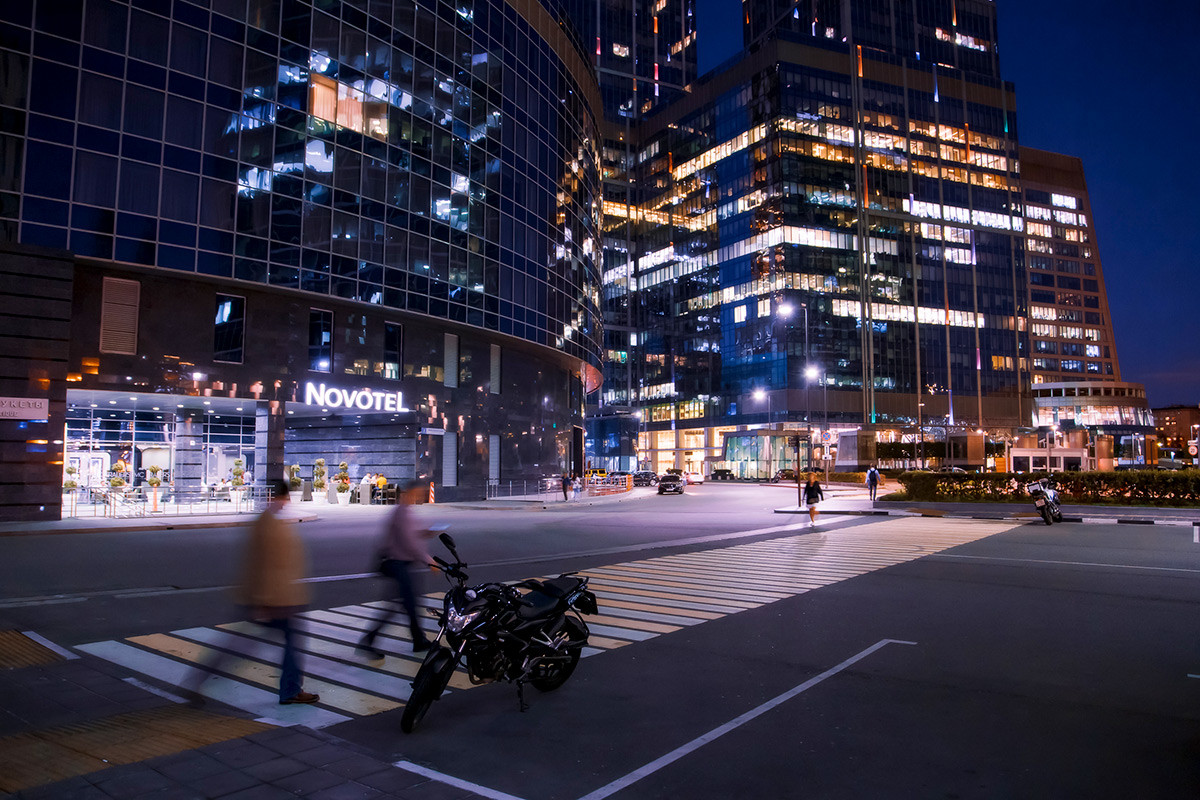 The capital’s business district lights up like a Christmas tree at night and is a popular place to go on evening walks. The Presnenskaya Embankment has plenty of cafes and restaurants where you can stop for a drink or a bite and if you’re at the foot of the skyscraper area, you’ll find a new public space: a multilevel amphitheater and glowing musical fountain, which works all year round. 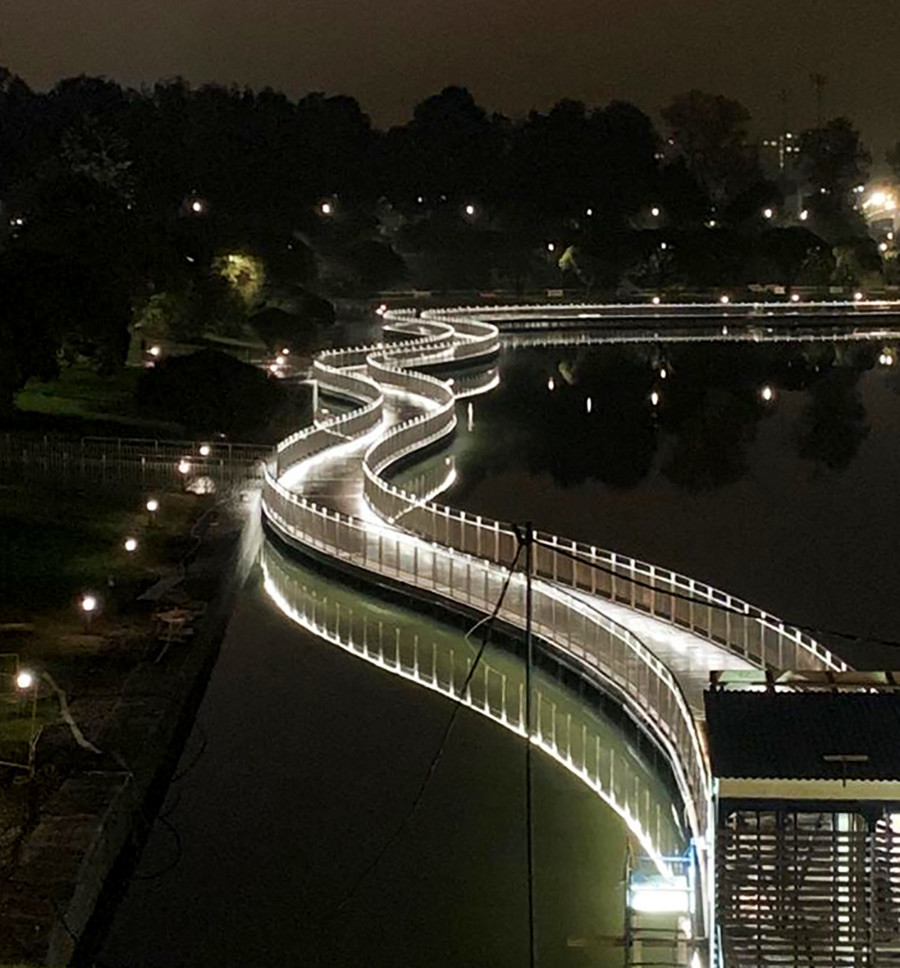 Inhabitants of the greenest (and furthest most from Moscow’s downtown) district like to visit this park with its glowing cascading fountains, shooting bursts of water eight meters into the air. The pedestrian bridge over the water looks like a moon path.

6. The pedestrian area around the Samora Mashel street 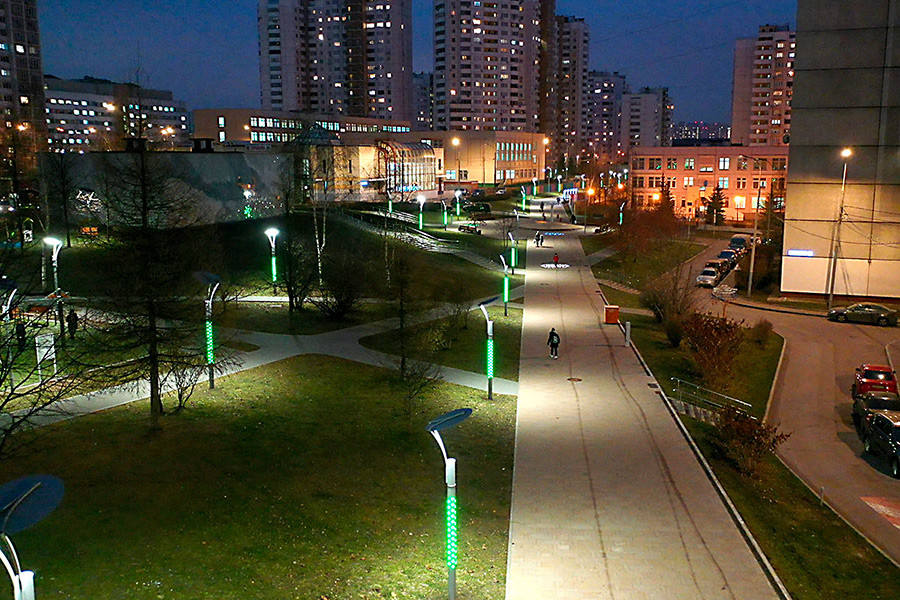 There’s a pedestrian area in between a few residential blocks in south-east Moscow. There are children’s playgrounds and various colorfully-decorated footpaths. There’s also a moon swing! 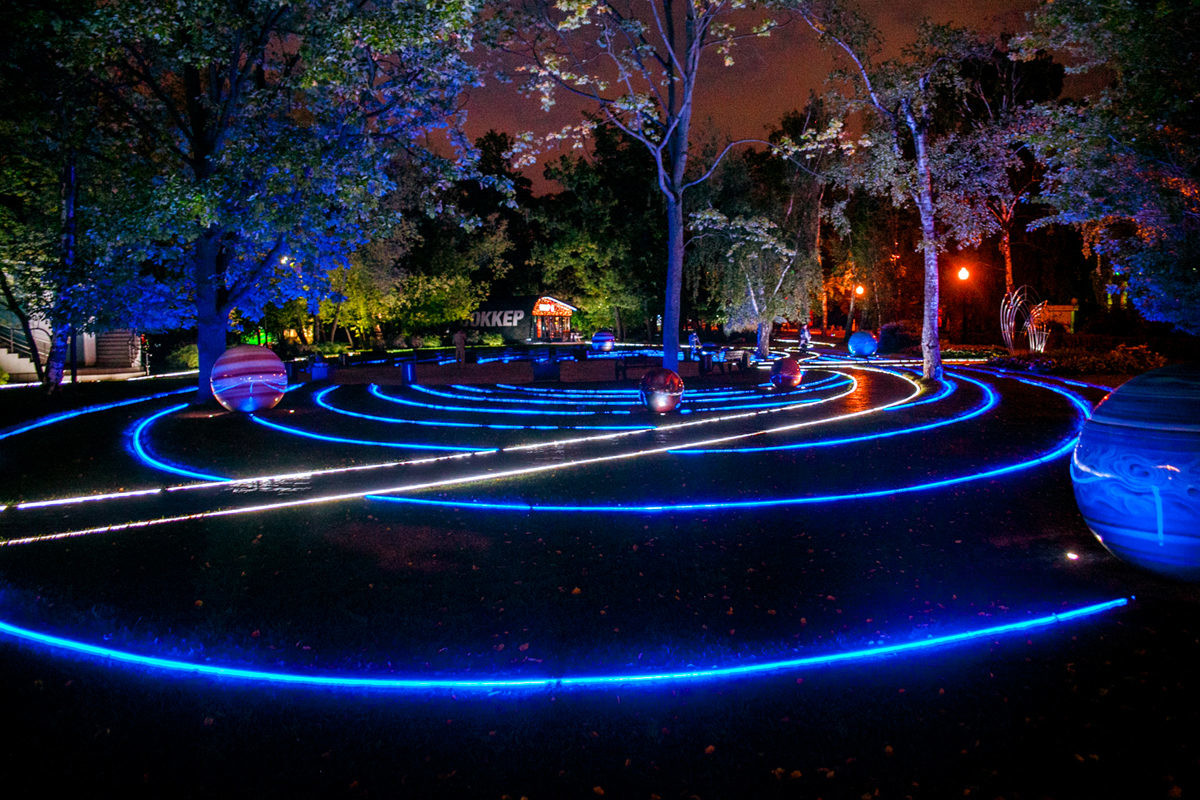 To understand the inner workings of our solar system, one doesn’t necessarily need to go to the Planetarium. The Sokolniki Park, in Moscow’s northeast, boasts some very realistic replicas of planets, which dazzle evening visitors. All of the stars and orbits light up in different colors, forming illuminated footpaths.

And don’t skip the arch alley next to the main entrance - it’s the best selfie spot in the park! 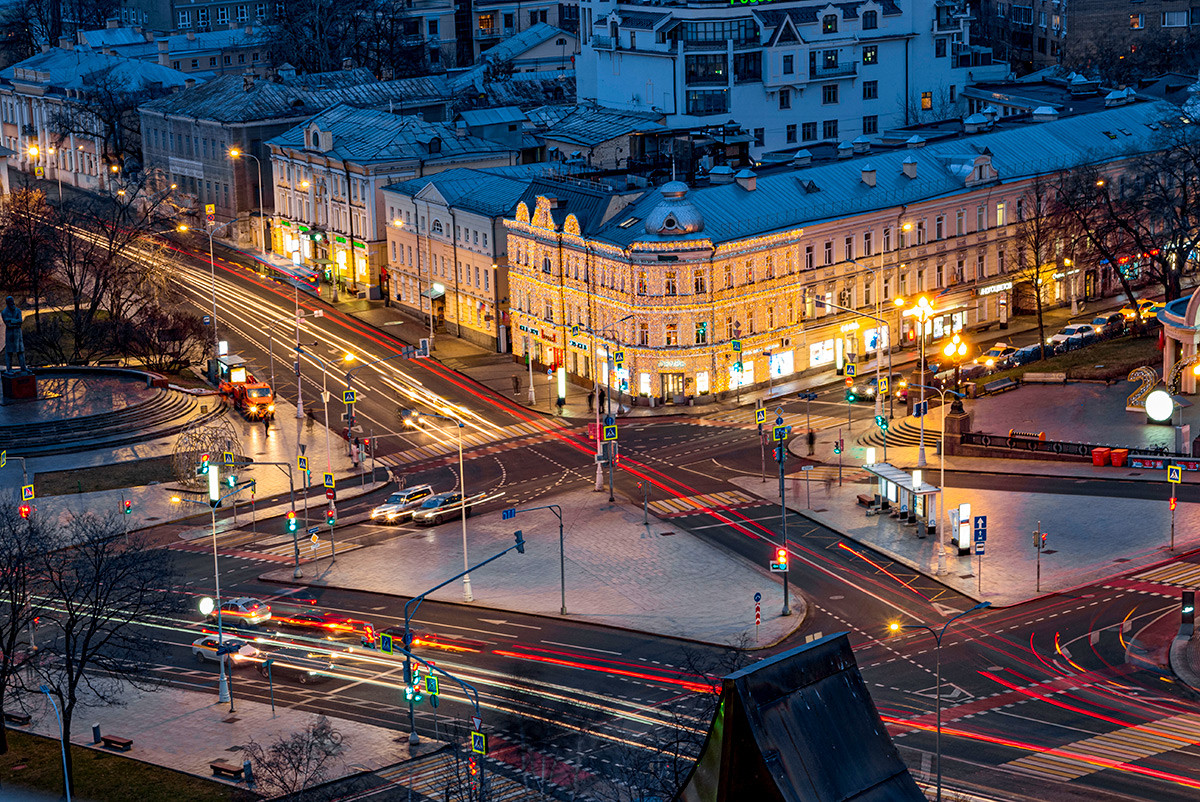 Moscow’s ‘boulevard ring’, with its lit-up trees, carved cast iron lanterns and luminescent arches is a perfect fit for those seeking a lengthy walk around the capital’s center. The ‘ring’ comprises 19 boulevards measuring nine kilometers in length and all running through Moscow’s most scenic central areas. There are old Moscow buildings, where famous artists or writers might once have lived (which you can read about on designated plaques).

Going on an evening walking tour of Moscow’s downtown architecture is an indescribable feeling. There are markets and street fairs for every season of the year, as well. It gets especially pretty in winter, however, when the trees and pedestrian areas light up with millions of lights.

The article uses materials provided by the website of the ‘Moy Rayon’ (“My District”) program, run by the Moscow mayor and aimed at ensuring equal development standards for all Moscow districts.