6 BREATHTAKING places in Karachay-Cherkessia you must visit (PHOTOS) 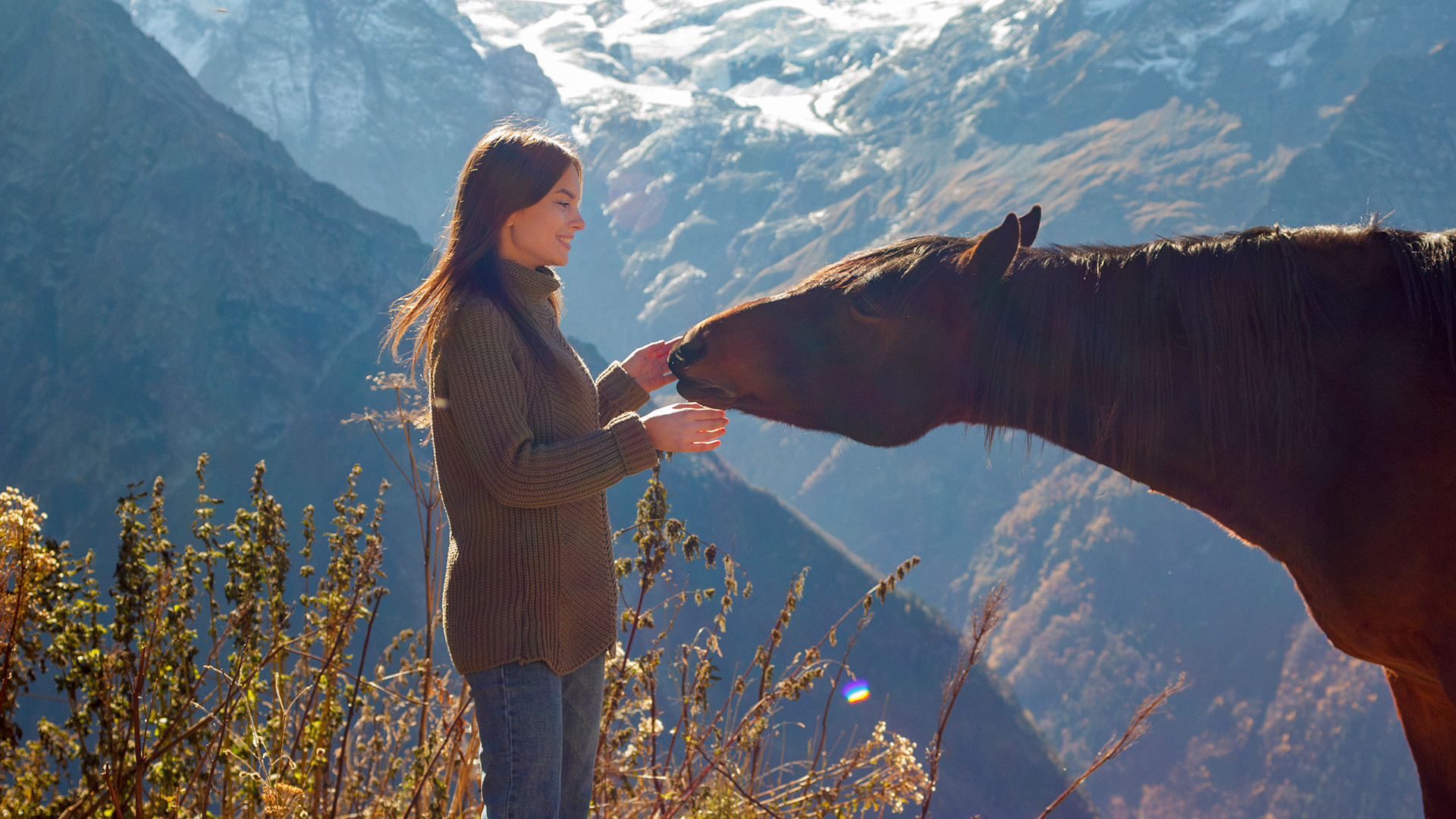 Getty Images
Sandwiched between Krasnodar Krai, Stavropol Krai, Kabardino-Balkaria and Georgia, Karachay-Cherkessia is a republic in the north of the Caucasus mountains that is a real heaven for mountain lovers both in winter and in summer.

Together with local tour guide Artem Babaritsky, we’ll take you on a virtual journey of the region’s finest gems and best kept secrets that will make you want to start packing your bags! 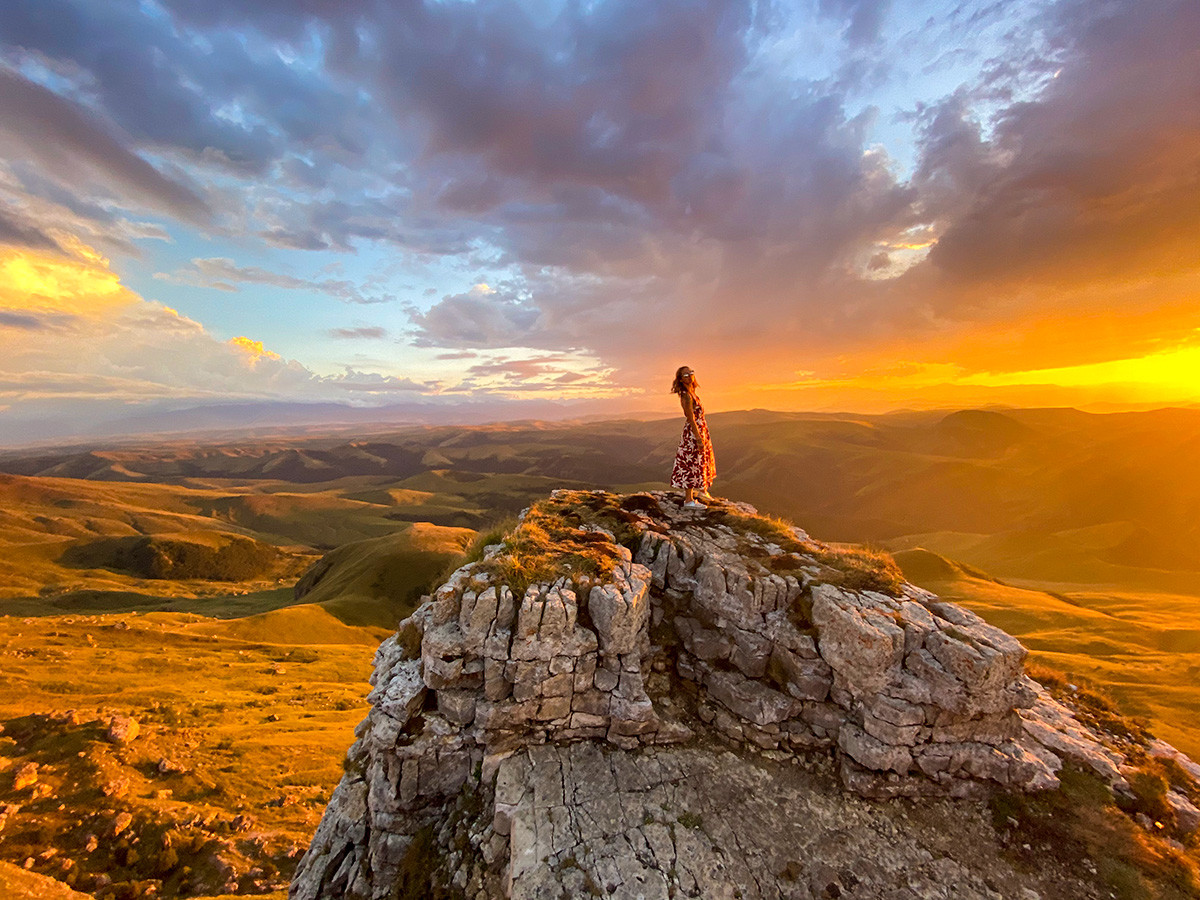 Bermamyt Mountain is 2,592 meters above sea level and because of its unusual terrain, the Bermamyt Plateau is sometimes dubbed an ‘Outpost of Mars in the North Caucasus’. Though it’s only 30 kilometers from Kislovodsk (a popular resort town in Stavropol Krai), it’s pretty hard to get to, unless you own a four-wheel drive vehicle, so (for now) it’s still not super touristy. And it’s a very bumpy ride! 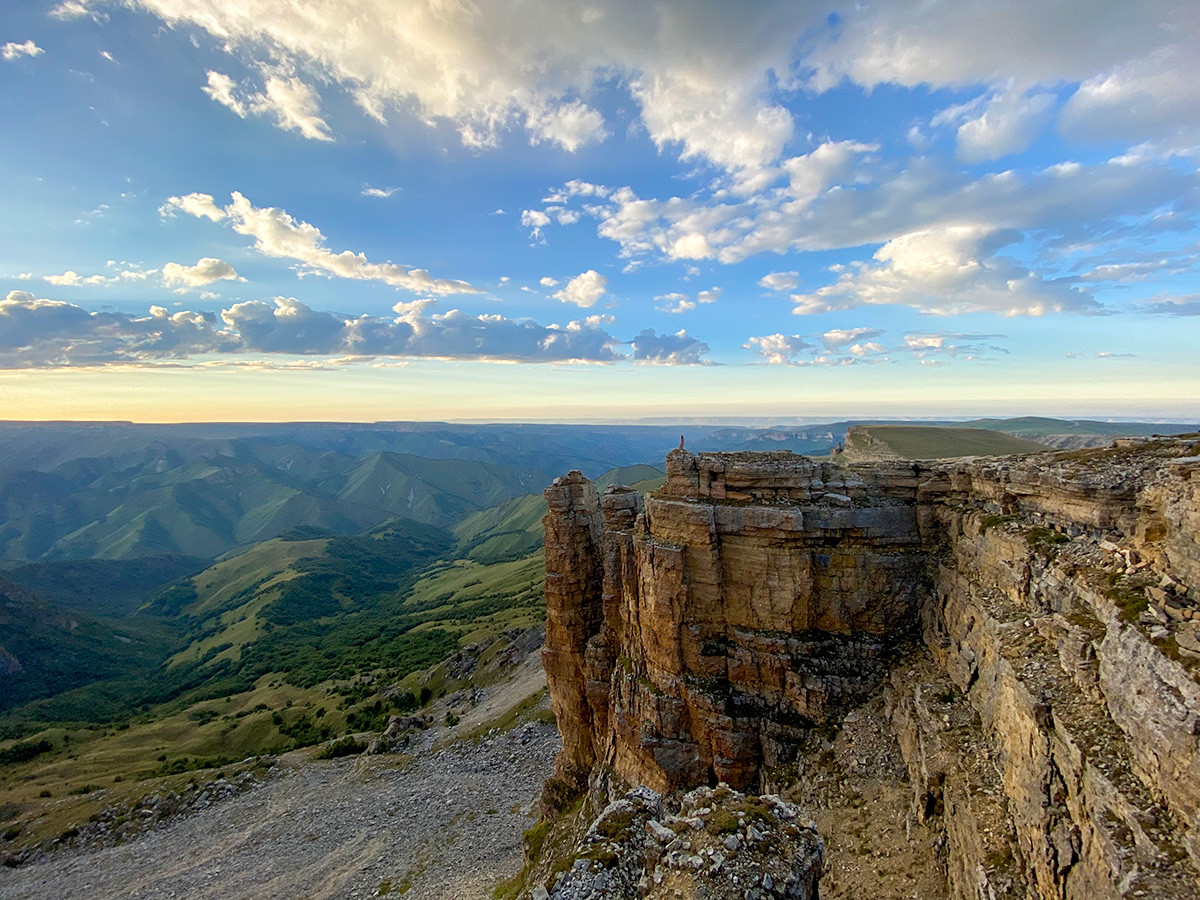 On a clear day, wonderful views open up revealing the incredible snow-covered ranges of the Greater Caucasus and Mount Elbrus. But even on a cloudy day, you’ll get quite the view. Seasoned travelers who have seen the sunset on all the continents say that the one you can see on some evenings at Bermamyt is easily one of the best ever. It’ll be a while before you manage to ply your jaw off the ground! 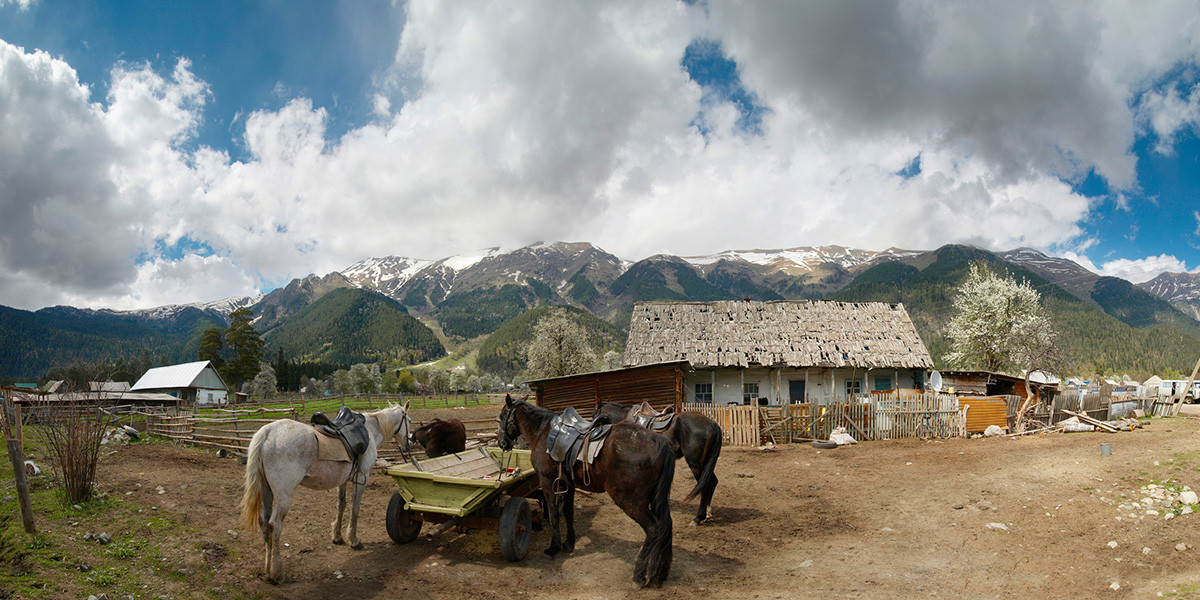 Arkhyz is a real playground for adventure lovers all year round. In summer, this village in the valley of the Bolshoy Zelenchuk River (sitting at an altitude of 1,450 meters) is especially pleasing to the eye, since everything drowns in greenery and there are many blue lakes and fast rivers to explore. It’s a great place to do some easy rafting along this gorgeous mountain river.

It’s also a place to give your health a boost. The fresh mountain air attracts people with respiratory problems to help them alleviate their condition, at least for a little while.

In the vicinity of Arkhyz, there are numerous historical and architectural monuments for those especially interested in early Christianity in the Caucasus. The Zelenchuksy Churches are an archaeological preserve extending for 4 kilometers around the ruins of Nizhnearkhyzskoe gorodishche, tentatively identified as the medieval capital of Alania, a Christian state destroyed by the hordes of Mönghe Khan in the 13th century. The most remarkable feature of the site is a cluster of three early medieval churches.

Another tourist attraction in the valley is a mandylion-type rock painting of Christ that appears to date back to the 10th century but was discovered only recently. This icon is quite hidden on the slope of the Matseshta ridge; various legends have been circulating about its provenance. 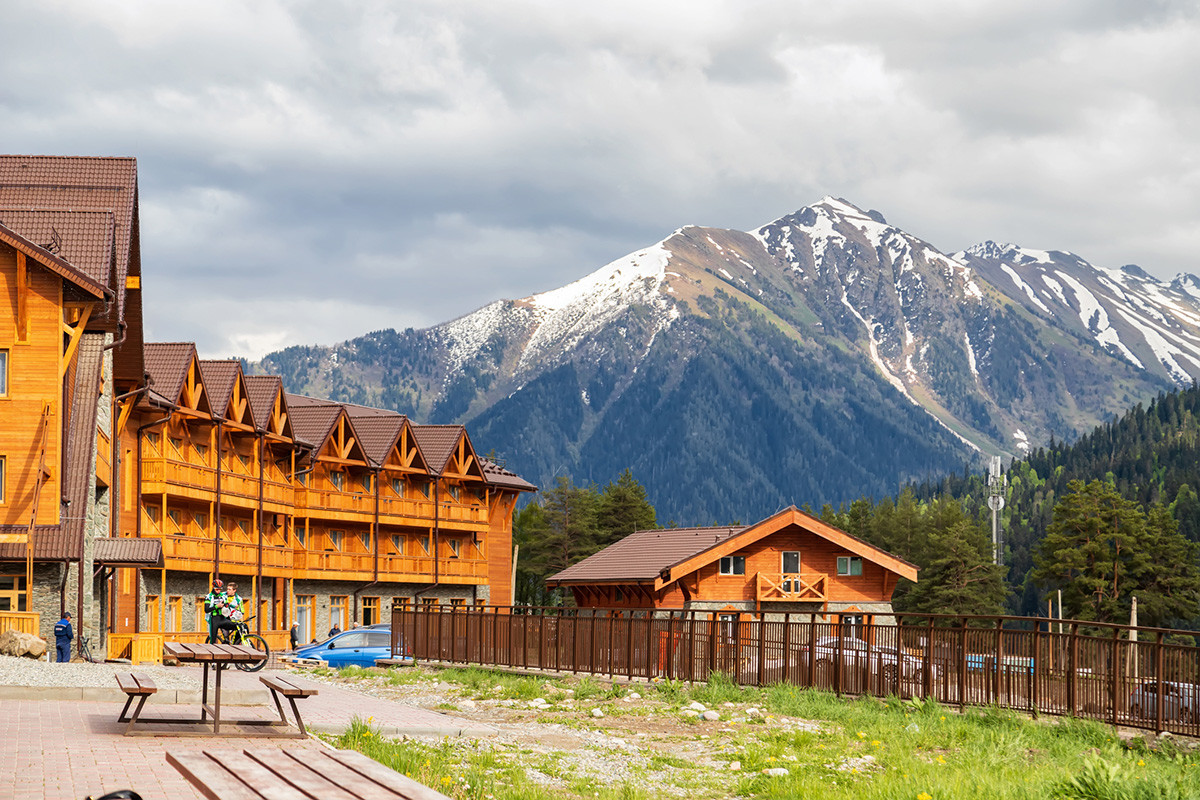 The elevation of the surrounding mountains is more than 3,000 meters above the sea, so, in the winter, it attracts mountain sports enthusiasts. Arkhyz is one of the newest ski resorts on the territory of the Russian Federation. Its infrastructure is still under development (but already very impressive) and experts predict a great future for the resort. The prices for winter holidays in Arkhyz are strikingly different from the prices at the famous European resorts. Moreover, the quality of the tracks and climatic conditions are in no way inferior to their expensive counterparts. 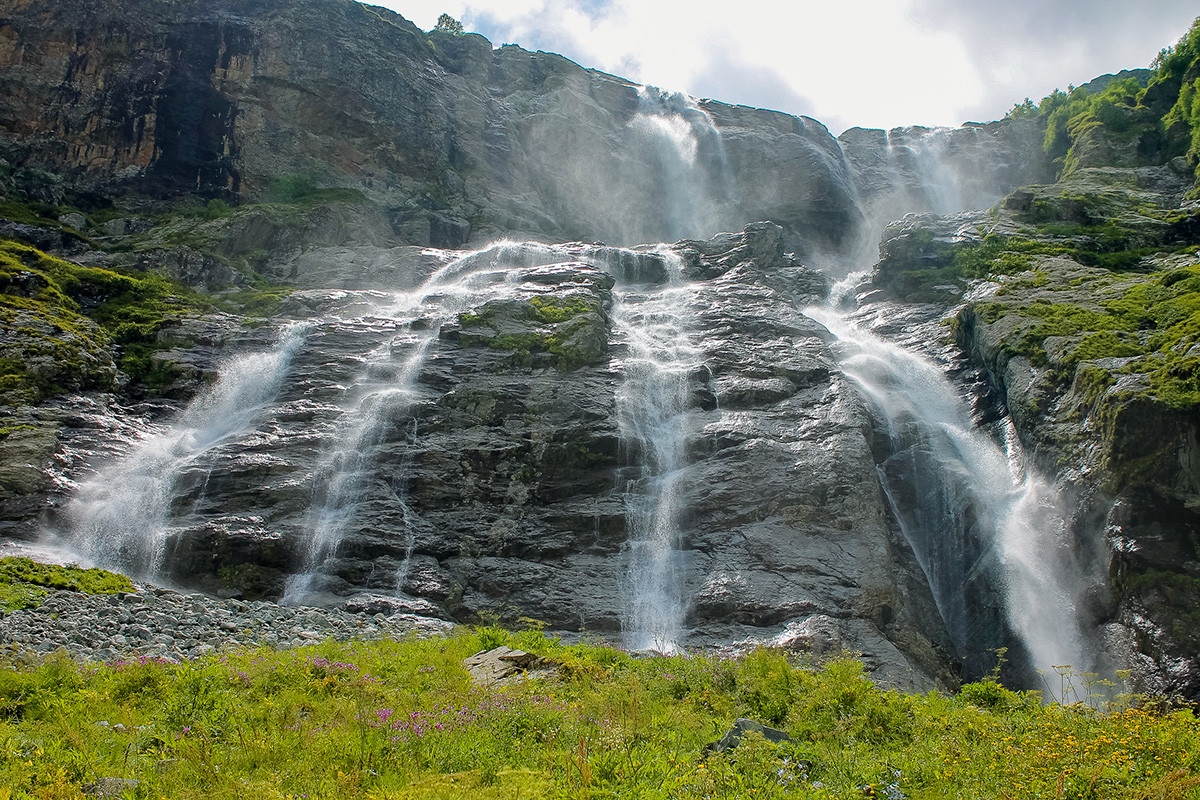 A walk along Mount Sofia entails lakes, waterfalls, glaciers and flower meadows. Among vacationers, this is a very popular outing because of its accessibility. To get to the waterfalls you will need to hire a jeep from Arkhyz or Taulu Valley. Get ready for a really bumpy ride, especially since the locals love to drive fast!

Sofia Waterfalls - a rushing stream of water falling from the mountain slope of Mount Sofia, is the second highest in the region at 3,637 meters (11,932 ft). The Sofia River originates in the Sofia glacier, from which, along the steep slopes of the mountains, it flows in a stormy stream into the valley. The hike to the waterfalls from the place your jeep drops you off is neither easy nor difficult, somewhere in the middle. It is two kilometers one way, with a 300-meter climb. However, in places, the path is very narrow and steep, so make sure to wear very sturdy footwear. 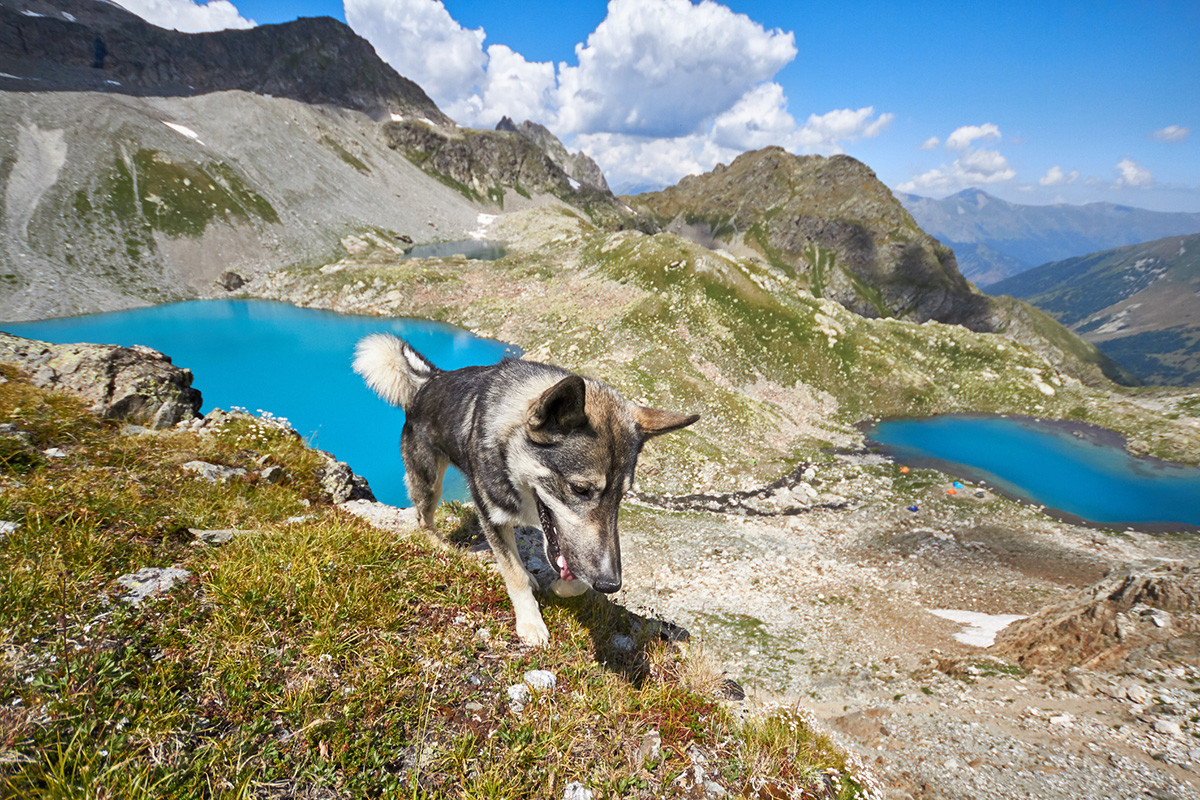 Then there are the Sofia Lakes, a place of extraordinary beauty – but you really have to work for this beauty! The trek is four kilometers one way with a 900-meter ascent. Visiting both in one day is doable, but keep in mind that you will have to overcome 12 kilometers of track and reach an altitude of 1,200 meters. If you are going to visit both places on the same day, it is advisable to first go to the Sofia Lakes, since the road there is more difficult, and keep in mind that you run the risk of not having enough time for the Sofia Waterfalls. 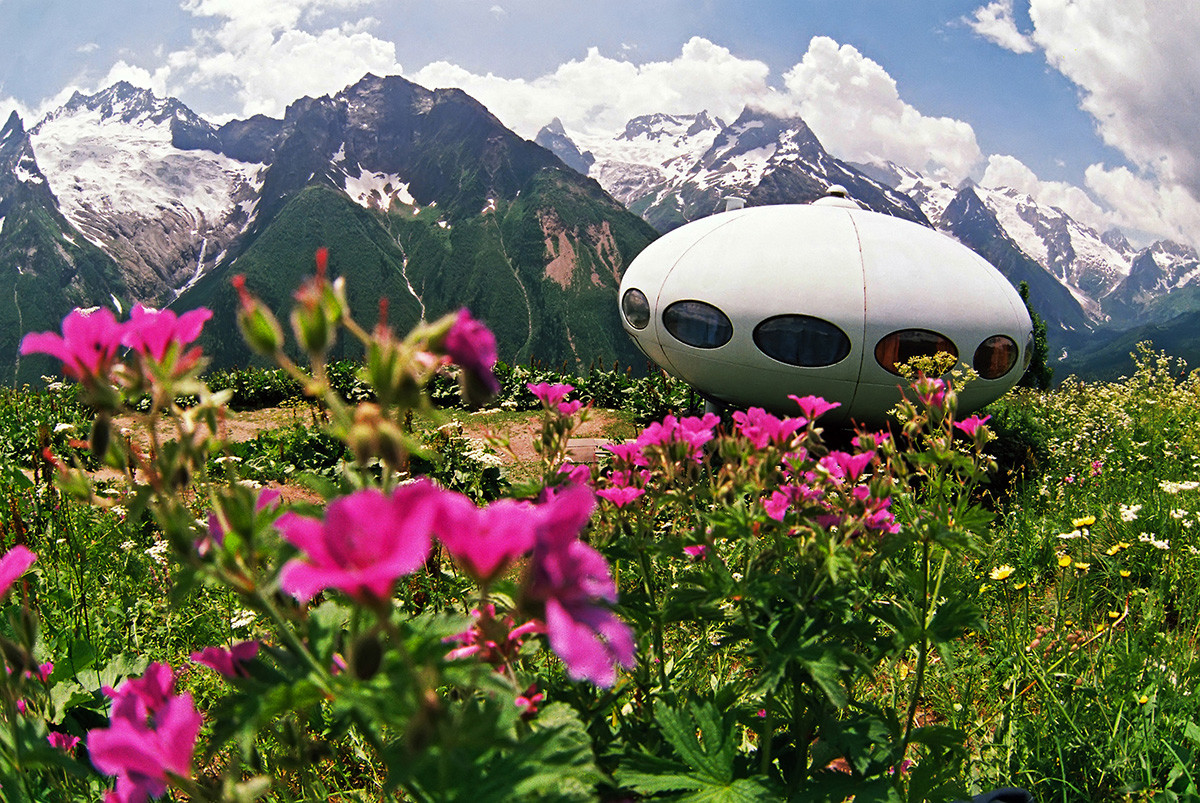 Dombay and Teberda are two towns located within the Teberda Nature Reserve. In winter, this is one of the most popular ski resorts in this part of the Caucasus and in the warmer months, this is an absolute mecca for hikers. The opportunities and routes are virtually endless, so it makes sense to make Dombay or Teberda (both boast a range of accommodation options to suit any budget) your base in order to explore as much as you can. After all, there are 100 lakes and 64 waterfalls on the territory of Dombay and Teberda.

Mount Mussa-Achitara, Gonachkhir gorge, Baduk lakes, Alibek waterfall, Turye lake, Amanauz gorge, Manor of Teberdinsky reserve, Jamagat gorge and narzans, Mukha gorge, Azgek gorge, Chuchkhur waterfalls, Byzantine temples from the 10th century and Sufrudzhinskie waterfalls are just some examples of the natural beauty that can be found in this area. Hiking trails are open until late autumn, so there’s plenty of time to explore it all! 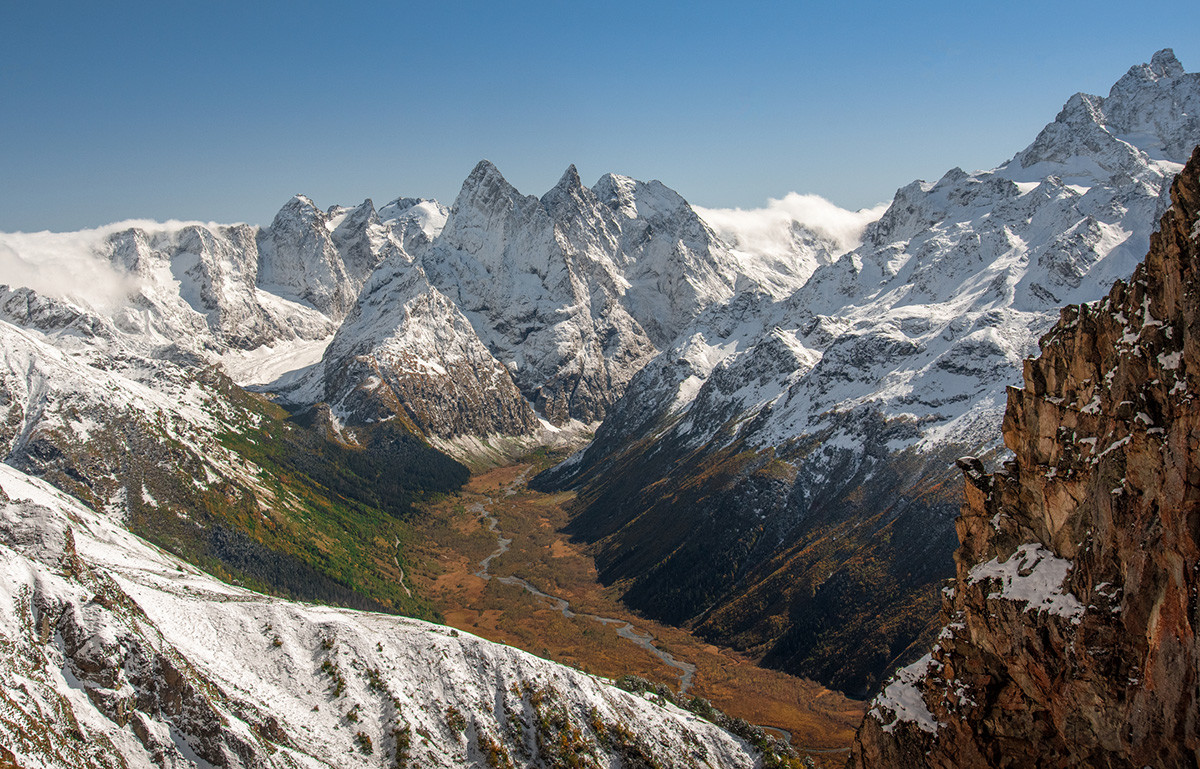 During winter, skiers and snowboarders flock to Dombay’s highest peak, Mussa-Achitara (3,012 meters; 9,881 ft), which offers ten pistes of varying difficulty and the chance to stay at the UFO-shaped Tarelka (“Flying Saucer”) Hotel, right on the slope.  For those who want an adrenaline rush, there’s also the option of free riding. While off-piste, skiing and snowboarding at the resort is in the so-called “grey zone” of legality, there are no rigid rules against it either. You can opt for a safer way to shred through the fresh deep powder by hiring an experienced guide to show you how to have fun on the slopes while staying safe. 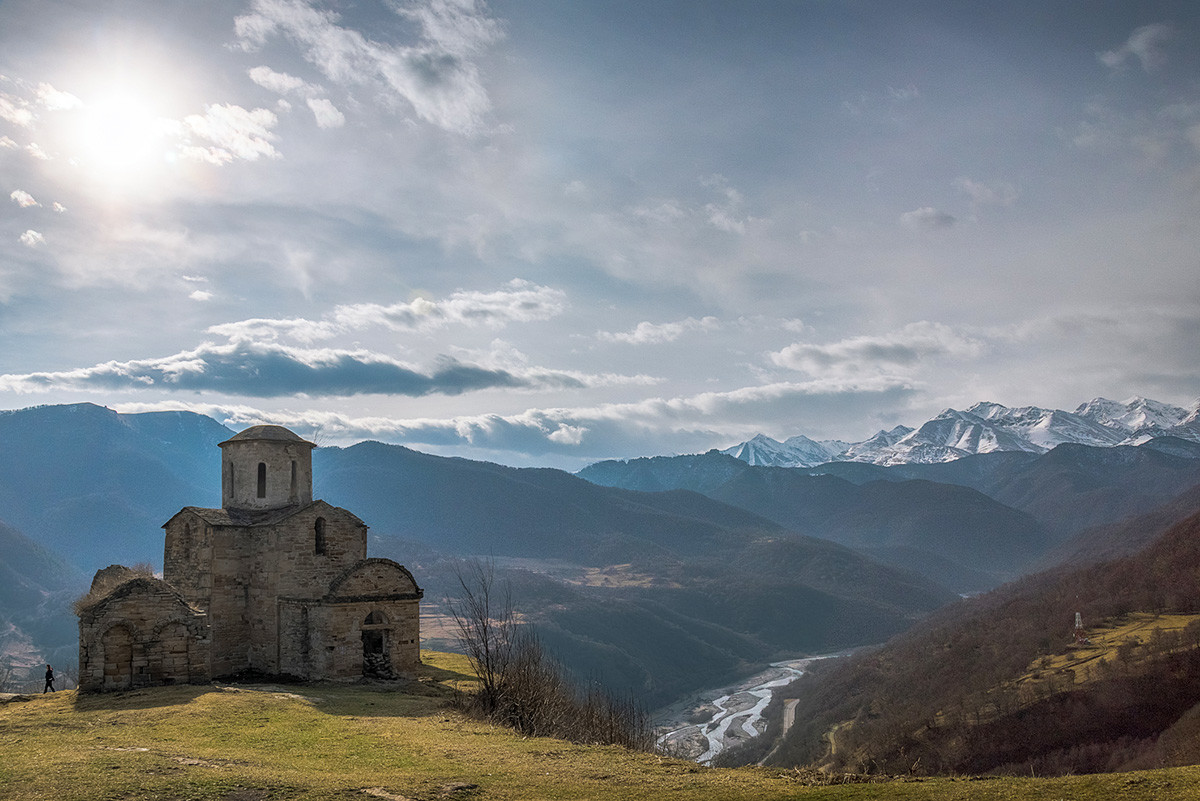 Standing proudly on a high rocky cliff of the Burun-Syrt massif overlooking the valley of the Teberda River, the Sentinsky Church is over 1,000 years old and is still in excellent condition. This, in itself, is a miracle because throughout its history it has lived through the Tatar-Mongol invasion, Islamization, the Russo-Turkish war, the Caucasian War, the church plunders of the Soviet regime, the Second World War and the chaos of the 1990s.  Back in medieval times, it used to be part of Alania, a once-prosperous kingdom in the Caucasus. The church is located near the village of Nizhnaya Teberda. 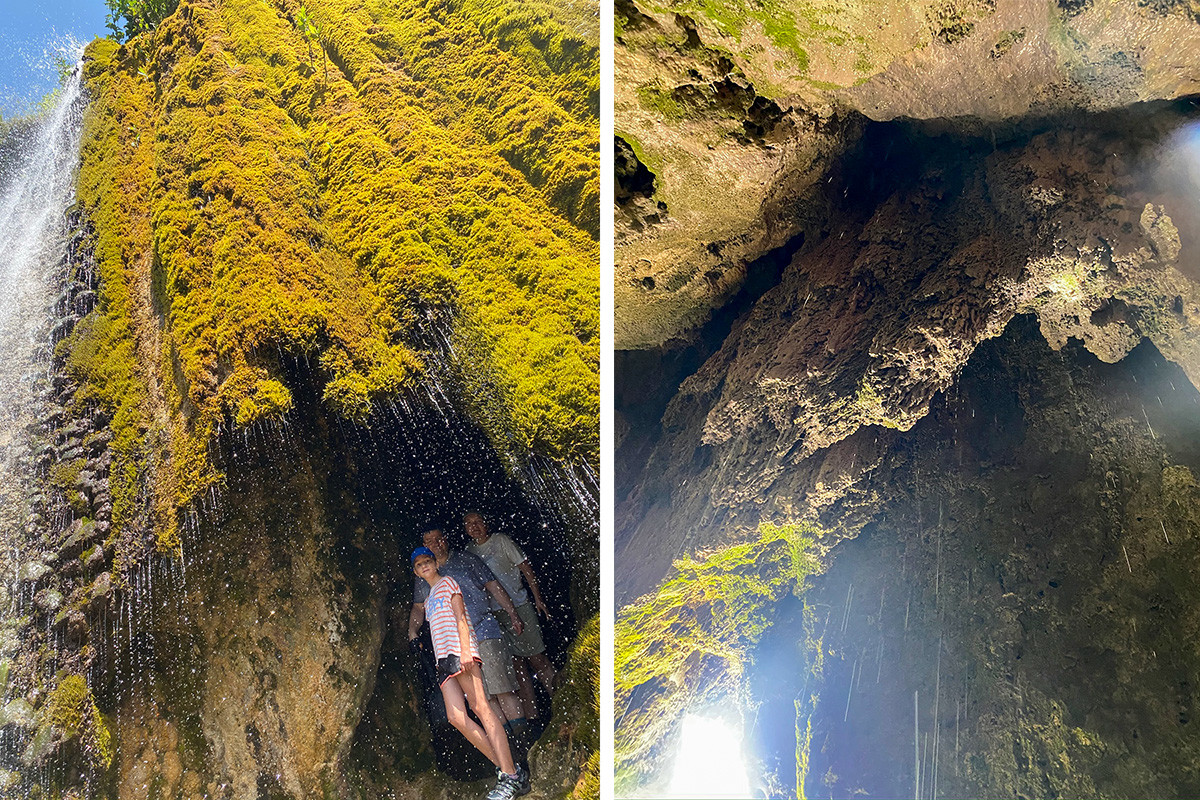 “I do not know who this Grishka is and why the place is named after him but the place is truly wonderful, it’s a real gem. These are karst caves - they formed by themselves. The caves are quite large and have a passageway between them. The highlight is that you will have to get there by passing under gently murmuring streams of spring water, which, shimmering in the sun, flow down the mighty rock covered with delicate moss of different colors,” says Artem. The only problem? No camera in the world will convey the sensations you will feel and the beauty you will see. 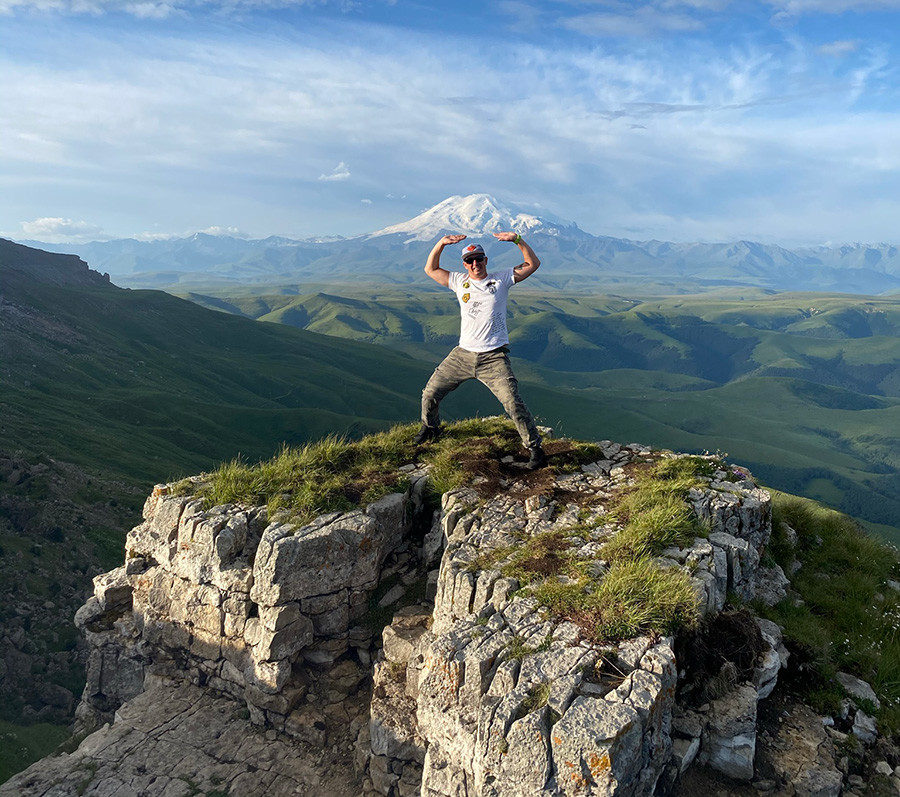 “The climate is very comfortable here. If we compare it to neighboring Krasnodar Krai, it’s much more pleasant and almost everyone can easily deal with it. Even on a hot summer day you won’t get that unbearable humidity and in the mountains it’s very nice. So if you’re sweltering in +37°C (98°F) in the cities, just drive 40 minutes and you’ll be in your own little paradise with the cleanest mountain air and a reasonable coolness surrounded by centuries old mighty pines,” Artem continues.

In winters, the mountains usually get a fair amount of snow, which allows for great skiing/snowboarding trips. However, lately, due to climatic changes, snowfall has become less predictable and there have recently been winters where there was much less snowfall than usual. The average temperature can dip to about -8°C (18°F) during the coldest month (January).

During the shoulder seasons (spring and autumn), the weather is still pleasant – especially if compared to some other parts of Russia – with daytime temperatures hovering around +12-15°C (54-59°F) in April and October.

How many days are enough and how to plan the trip? 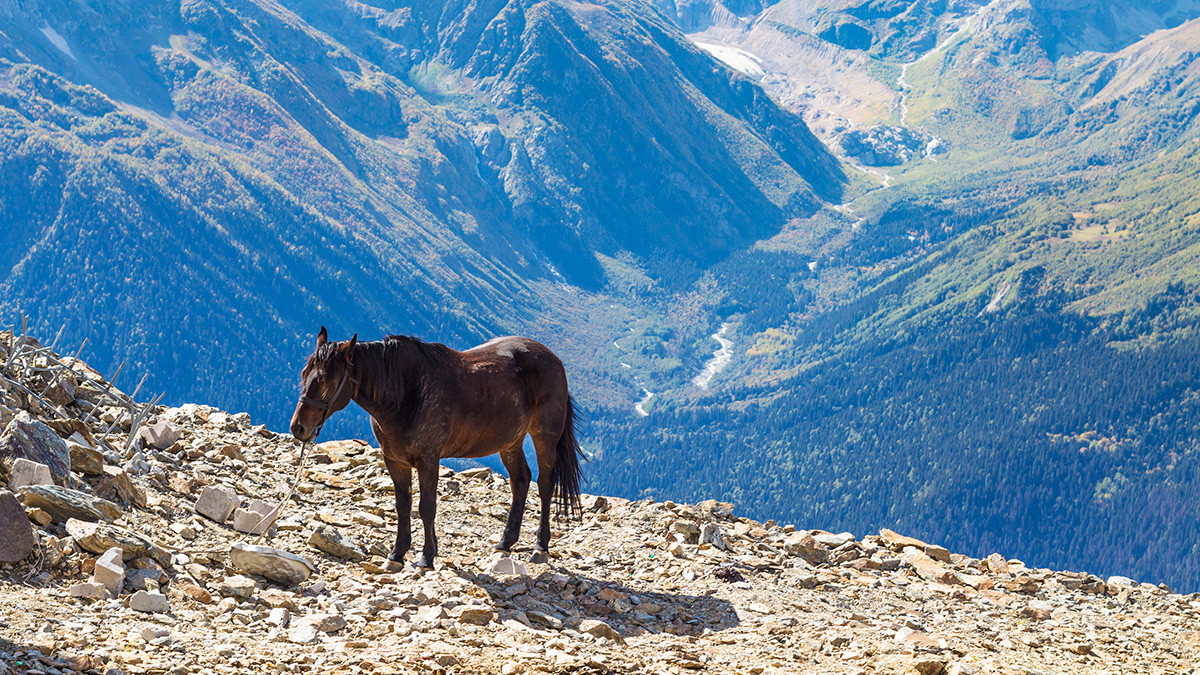 The more days you can manage to reserve for this trip, the better. Artem has been guiding tours on a daily basis around the Caucasus for more than 3 years and even he admits that he’s not seen it all; the sheer amount of sights seems to have no limits. Everything that is at least within a radius of 100 km cannot be seen in a week. But even if you go for a long weekend you will manage to get a feel for the spirit and the beauty of the Karachay-Cherkessia part of the Caucasus mountains.

“If you’re considering day trips without an overnight stay, there are a lot of choices. All the mountains are simply overflowing with lakes located at an altitude of 2,000–3,000 meters above sea level with amazingly clear, glacial water. Caves are totally a separate topic! There are so many of them that it is simply unrealistic to list and visit everything and their beauty and power cannot be described. You can start with the small and the nearest and continue according to ascending levels of beauty and remoteness from villages and auls (a type of fortified village found throughout the Caucasus mountains and Central Asia). These places are also divided into different categories, where you can go on foot and those to which you can drive up by car. Again, driving a car can be divided into several categories - this is full asphalt, off-road and wild off-road.”

When thinking of where to stay, Artem recommends staying in Kislovodsk in the neighboring Stavropol Krai as the capital of Karachay-Cherkessia (Cherkessk) is not as developed in terms of tourist infrastructure as the cities of the Caucasian Mineral Waters, which have been welcoming tourists for more than two centuries. Kislovodsk is the perfect base if you want to go on day trips to the numerous places of interest in Karachay-Cherkessia (the “border” between the two regions is a 20-minute drive) and have a wider range of entertainment and dining options when you’re back in the evenings.