Go back to the USSR with this new RETRO train (PHOTOS) 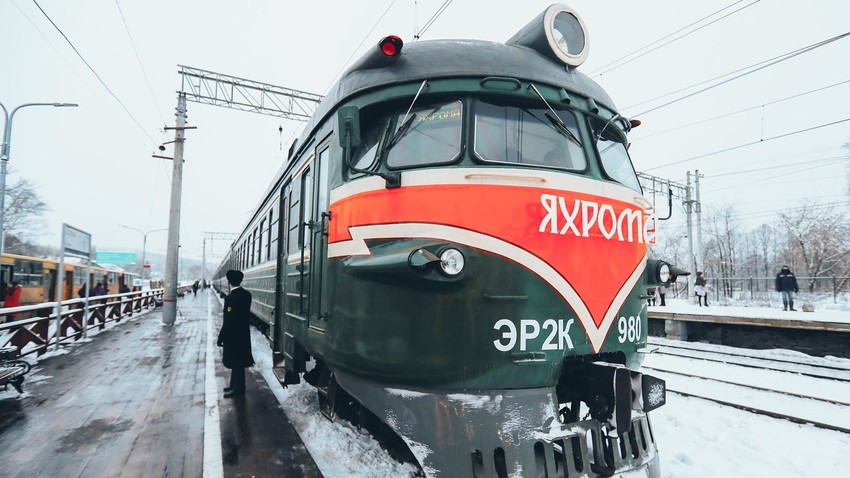 Vitaly Belousov/Sputnik
It runs from Russia’s capital to a nearby ski resort just 50 kilometers away from the city.

A new retro train consisting of eight classic green cars now runs from Moscow to a nearby ski resort, roughly 50 kilometers away from the capital. The train is made on the basis of electric trains called ‘ER2K’ that were once produced in Riga, Latvian SSR. 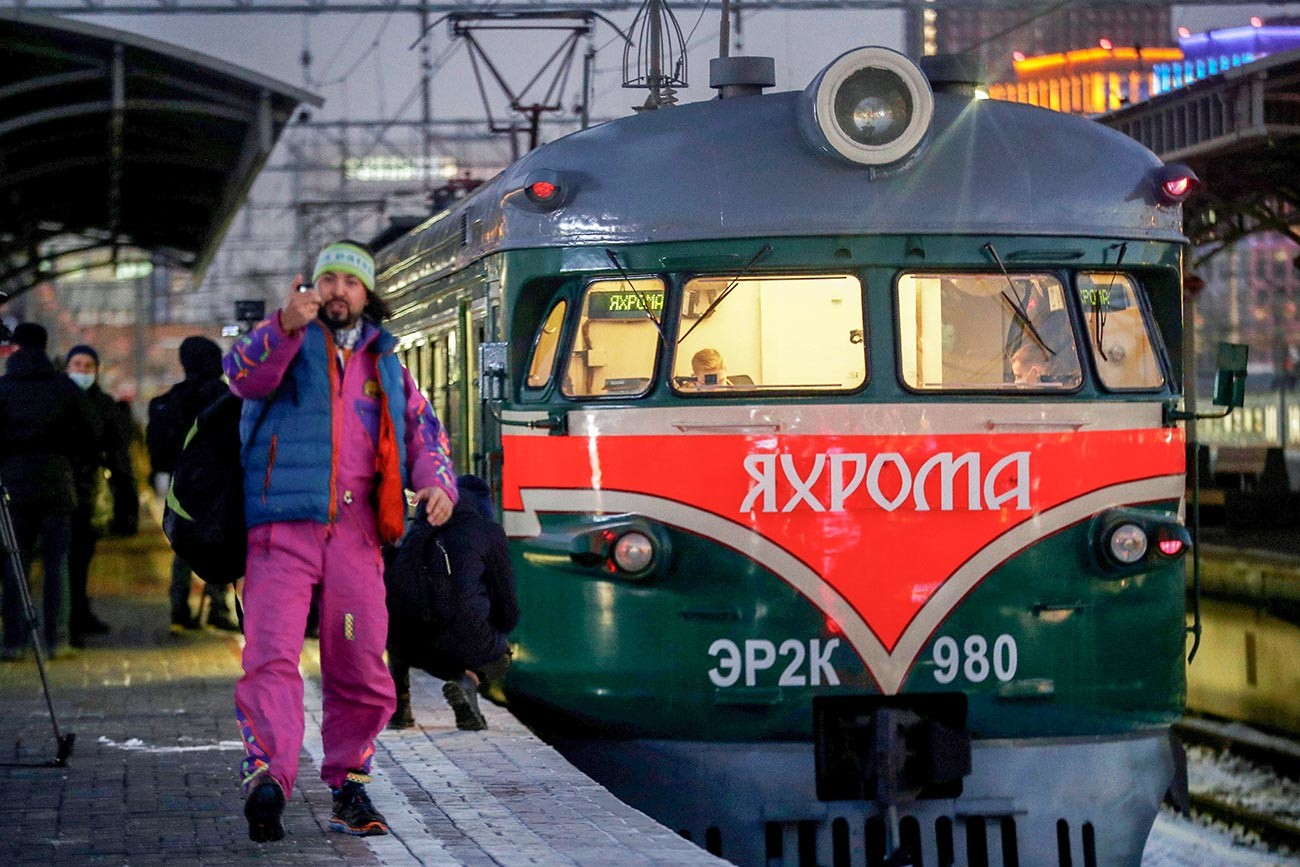 These trains are outdated and not produced anymore, yet Russian Railways, the state-owned company that operates the new retro train and other trains in Russia, chose the model on purpose for its distinctive retro look and feel. 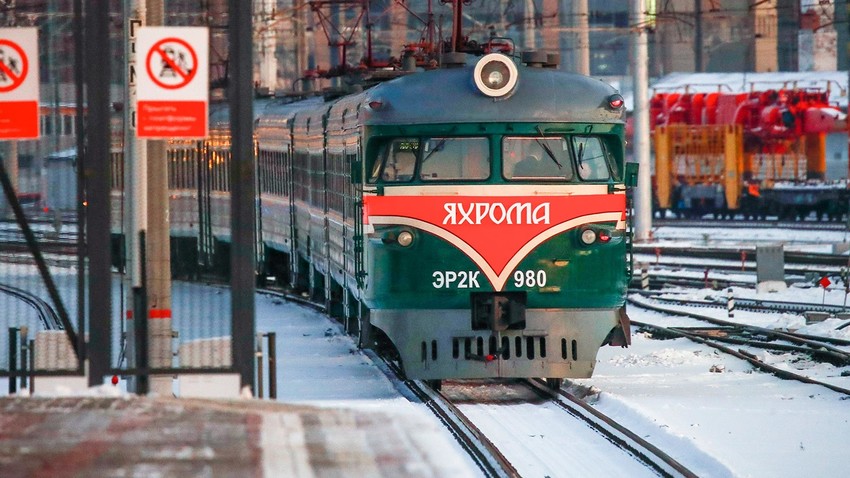 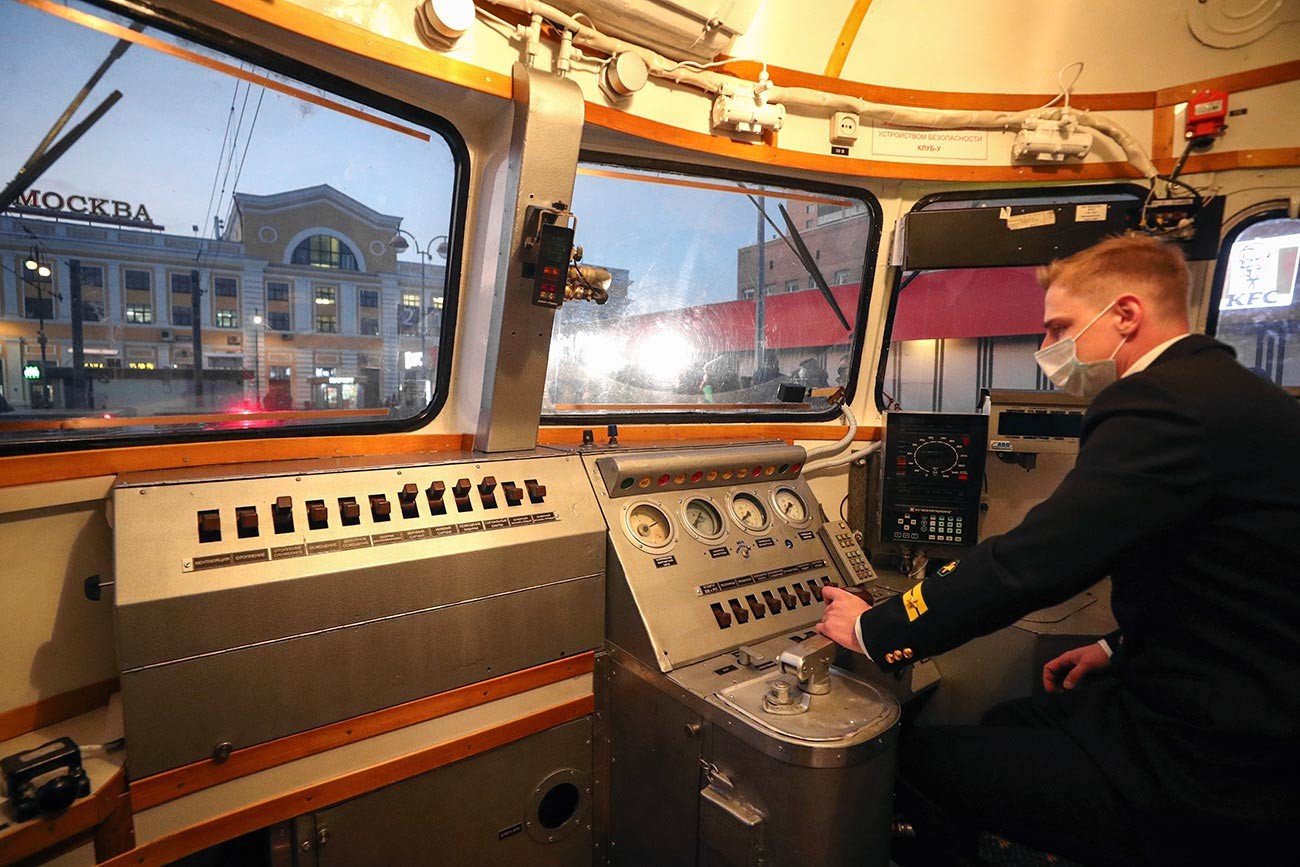 Although this old model of trains has a few shortcomings like loud noise, no restrooms or air-conditioning, the newly restored retro train feels different. 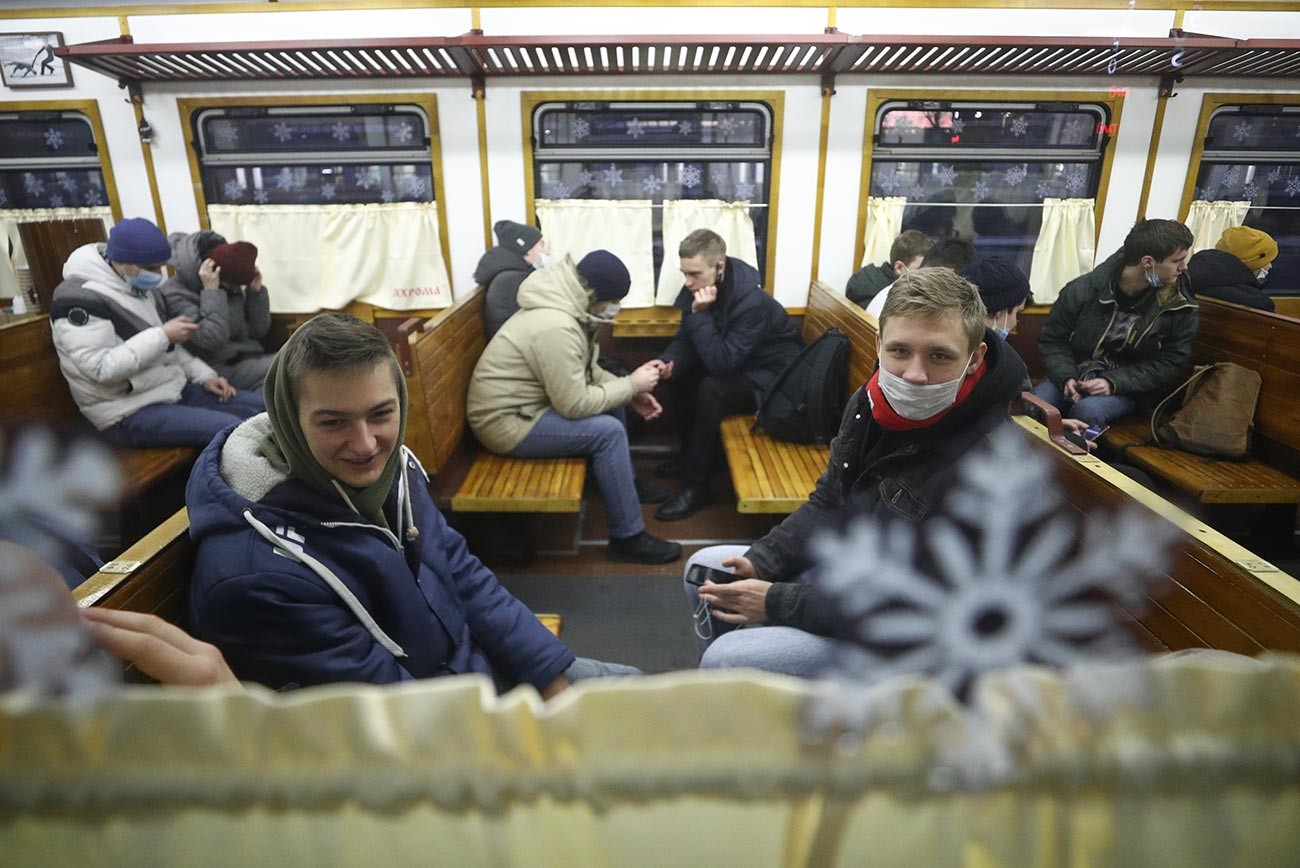 The train — named ‘Yakhroma’ after a settlement at its end destination, where local ski resorts are located — is colored in a classic dark green tone in striking difference to new red, white, and blue colors of modern electric trains running in Moscow and the region today. 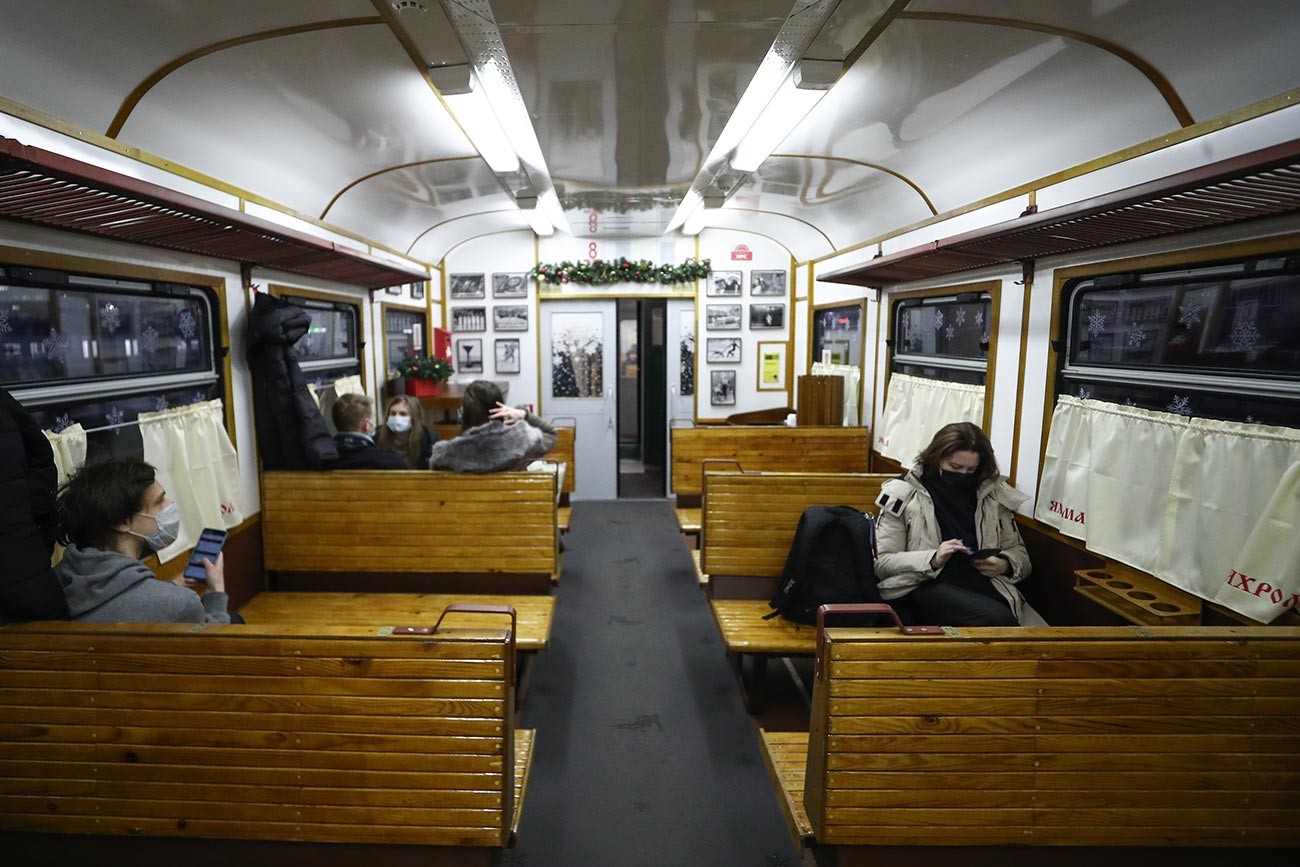 Inside, the retro train is equipped with comfortable, yet old-school, wooden benches instead of modern train chairs, while new curtains cover windows and some of the cars are equipped with bio restrooms. 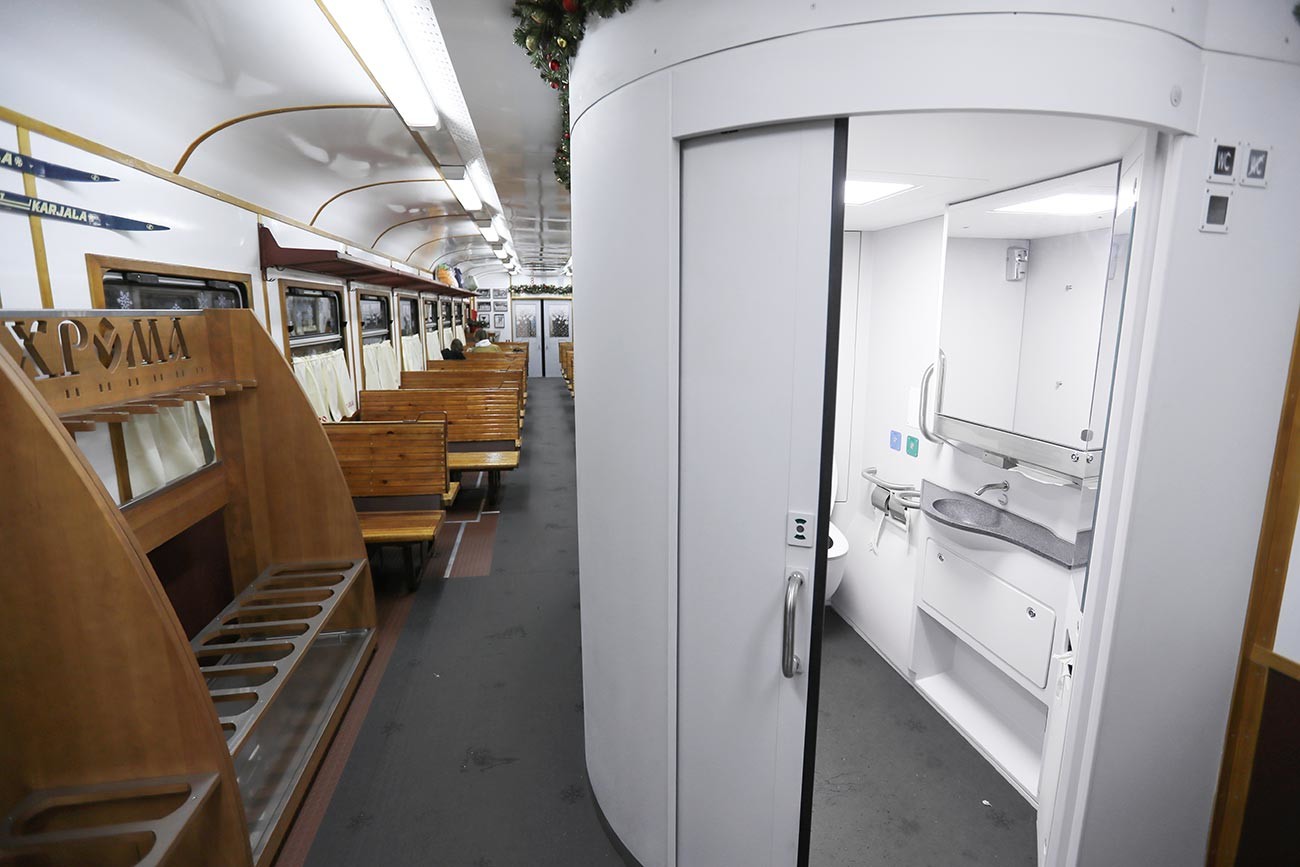 Since the train’s main destination is the winter resorts of Moscow Region, it also has retro wooden equipment for holding skis and snowboards. 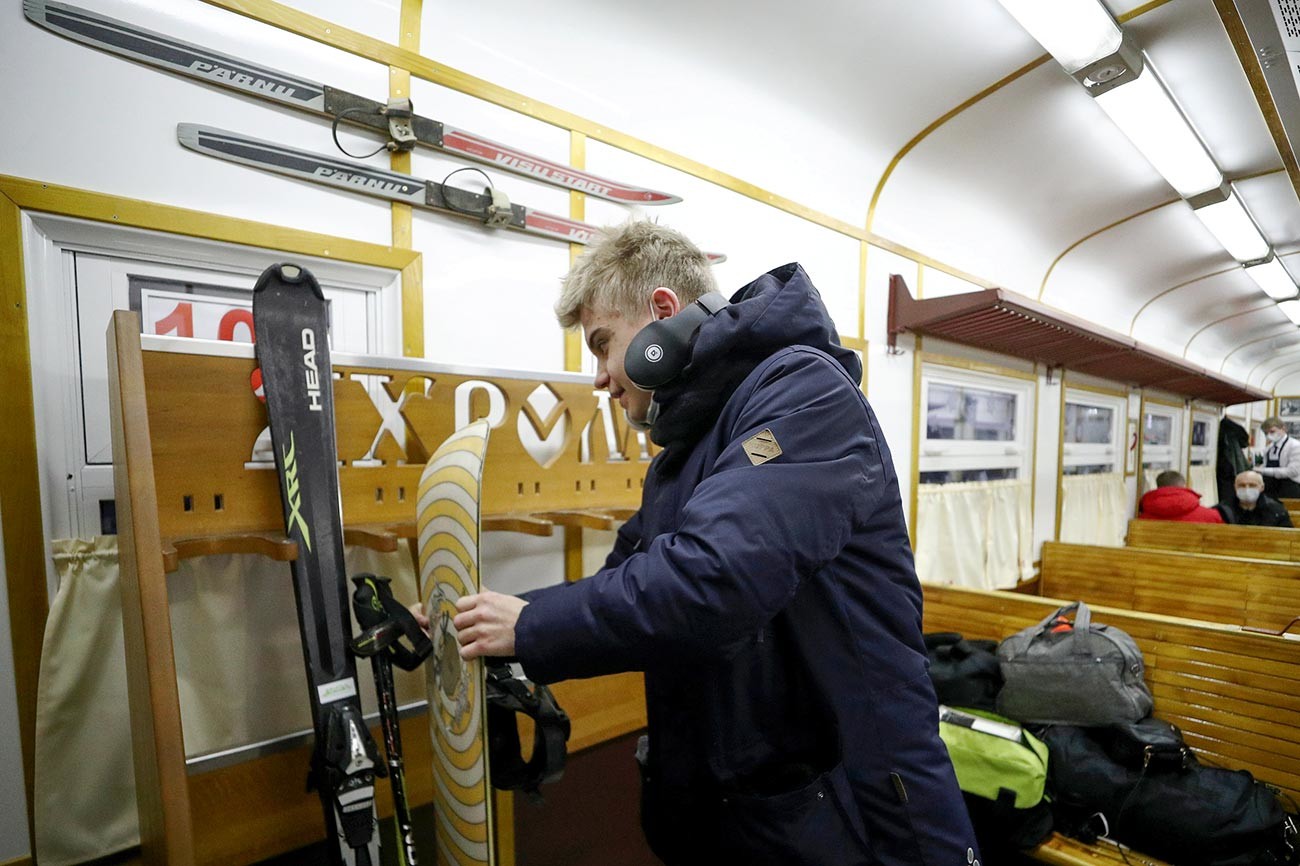 The interiors of the cars are decorated with Soviet posters and other murals that create an environment of what it was like during Soviet winter holidays. Classic Soviet skis are even mounted to walls in some of the train’s cars. 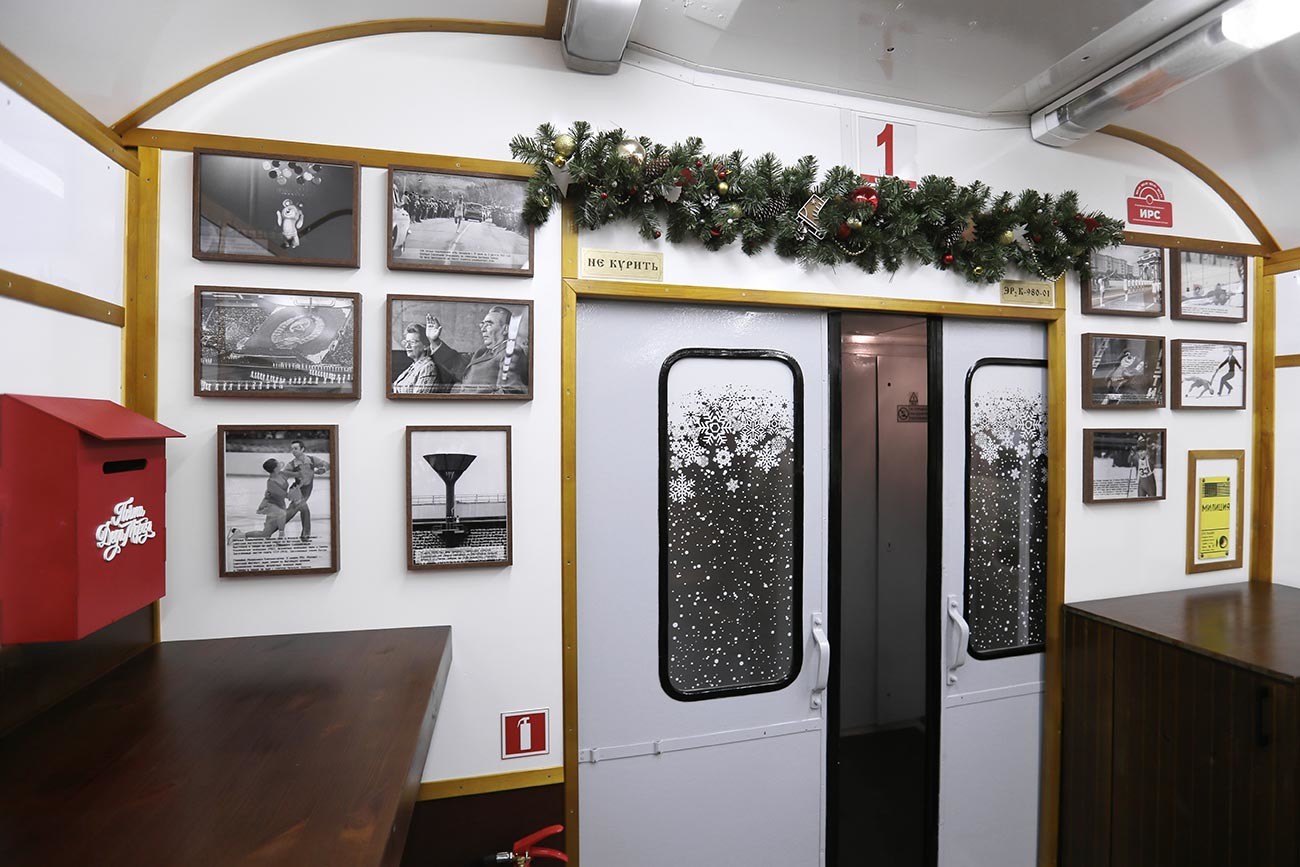 Despite a distinctive retro look, the train is fitted with modern utilities that people have got used to in recent years. For example, USB-sockets are available in cars for anyone needing to charge their smartphones or other devices. Tea and newspapers are distributed free of charge during the trip. 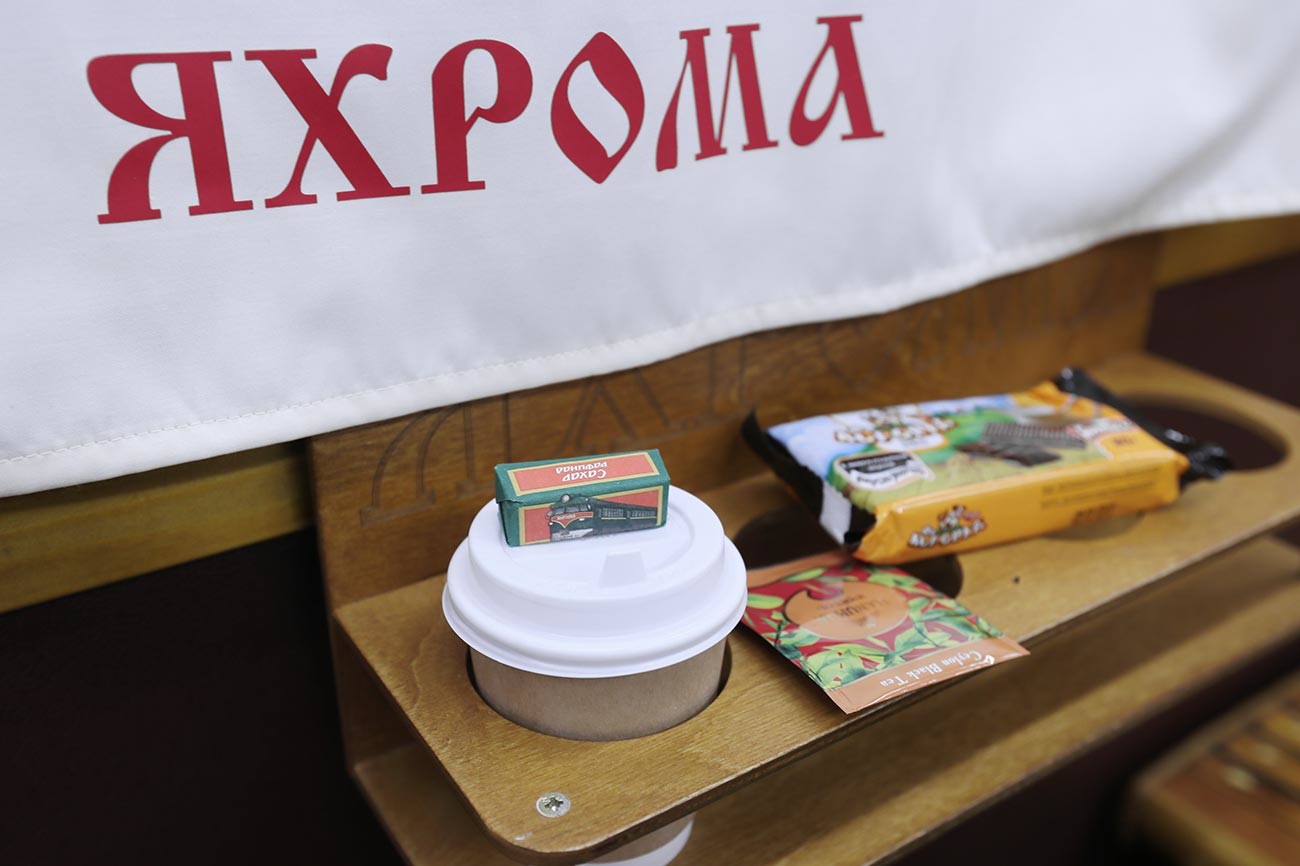 A ticket on the retro train that departs from the Savelovskaya railway station in Moscow costs 300 rubles (approx. $4) from Monday to Friday and 500 rubles (approx. $6.75) on weekends. Those who are traveling to the ski resorts also have the opportunity to buy a ski-pass with a discount. 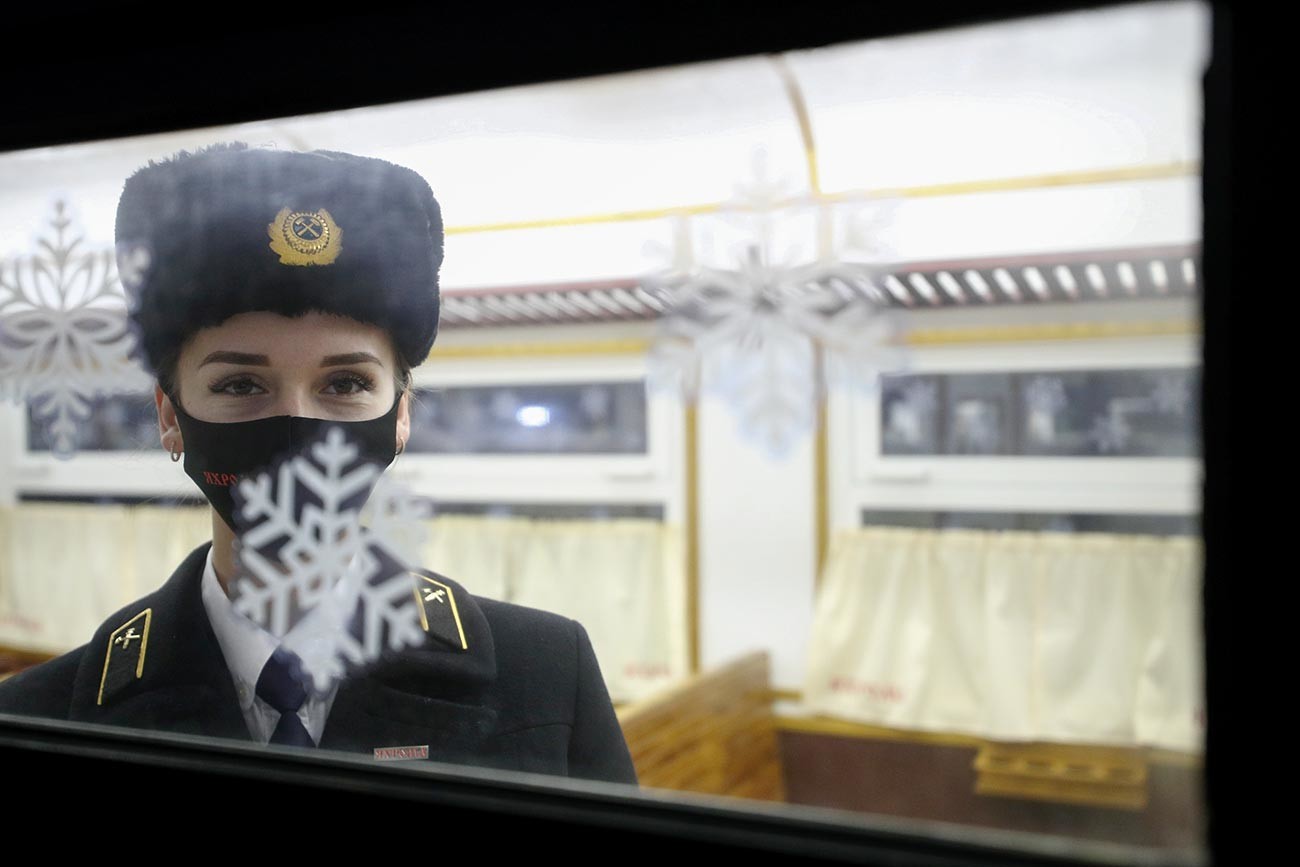 As a bonus, upon arrival at Yakhroma railway station, commuters get to ride retro ‘Ikarus’ buses to get to the ski resorts. 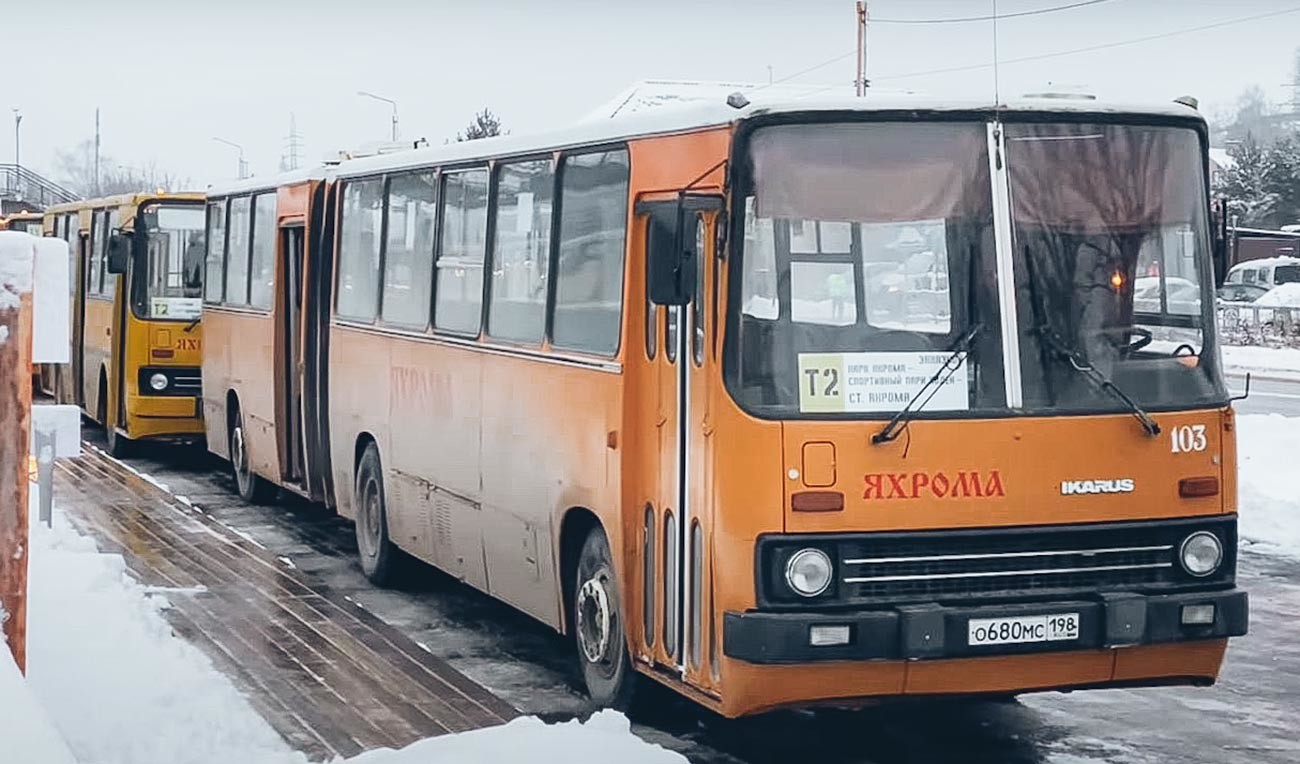 Tickets for the retro train are available online and at the Savelovskaya railway terminal.

Click here to see modern Russian trains that you simply have to take a ride on.