Archaic villages on the White Sea 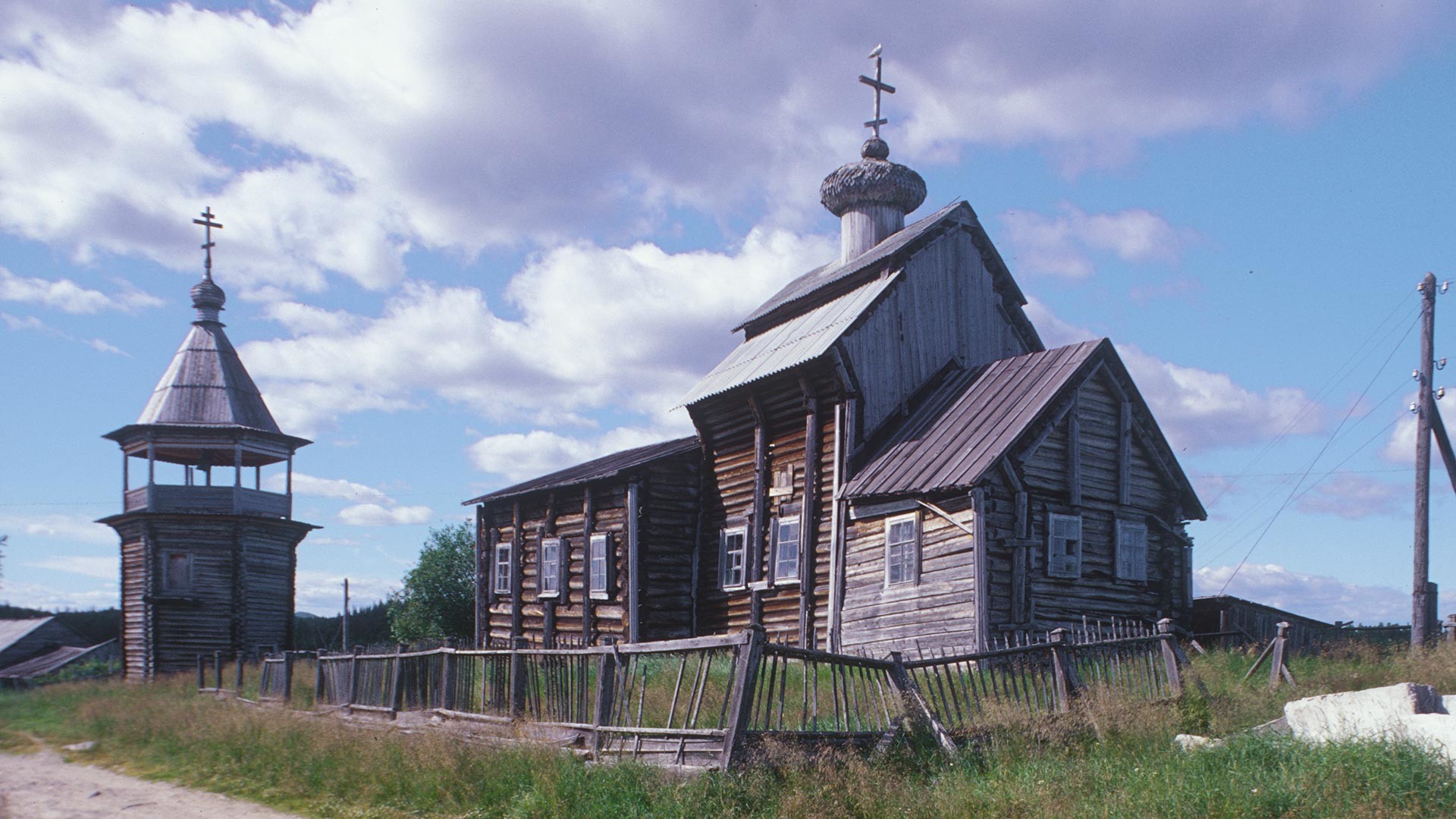 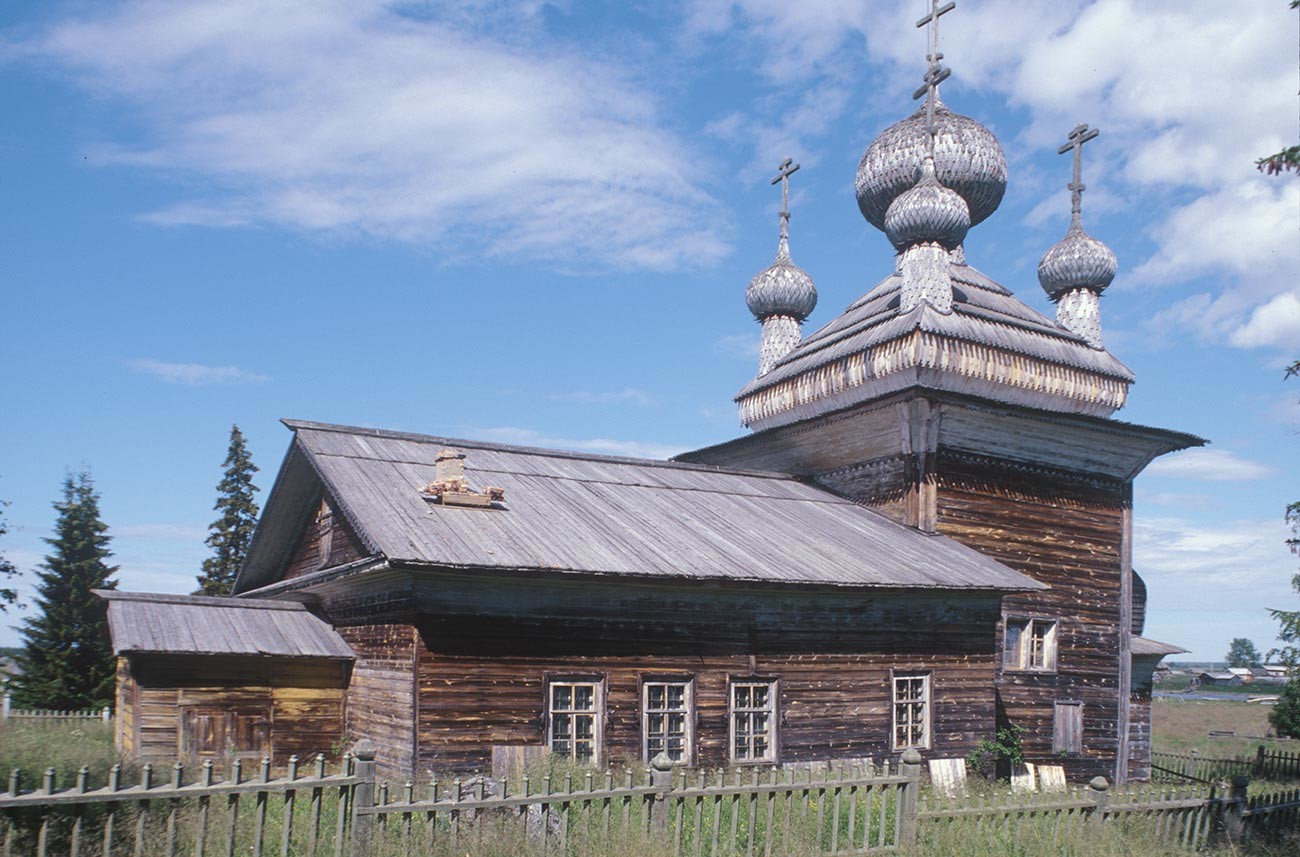 At the beginning of the 20th century the Russian chemist and photographer Sergey Prokudin-Gorsky developed a complex process for vivid, detailed color photography (see box text below). Inspired to use this new method to record the diversity of the Russian Empire, he photographed numerous historic sites during the decade before the abdication of Nicholas II in 1917.

Prokudin-Gorsky’s final expedition took place in the historic Russian North during the late summer of 1916 as the Great War raged in Europe. His special passage during these difficult times was enabled by a state commission to photograph railroad construction north along the White Sea to the new port of Murman (now Murmansk), built to receive Western military supplies for the hard-pressed Russian armies.

The White Sea (Beloye More) is the primary geographical feature of the Russian North. For centuries, its natural bounty has supported those hardy souls willing to endure its severe climate. Its rocky western shore gave rise to fishing villages that provided sustenance to Russian settlers in this strategically important region.

Prokudin-Gorsky’s route in 1916 passed near ancient settlements along the western shore of the White Sea. My visit to this area occurred not quite a century later, in the summers of 2000 and 2001.

Soroka: Entrance to the White Sea 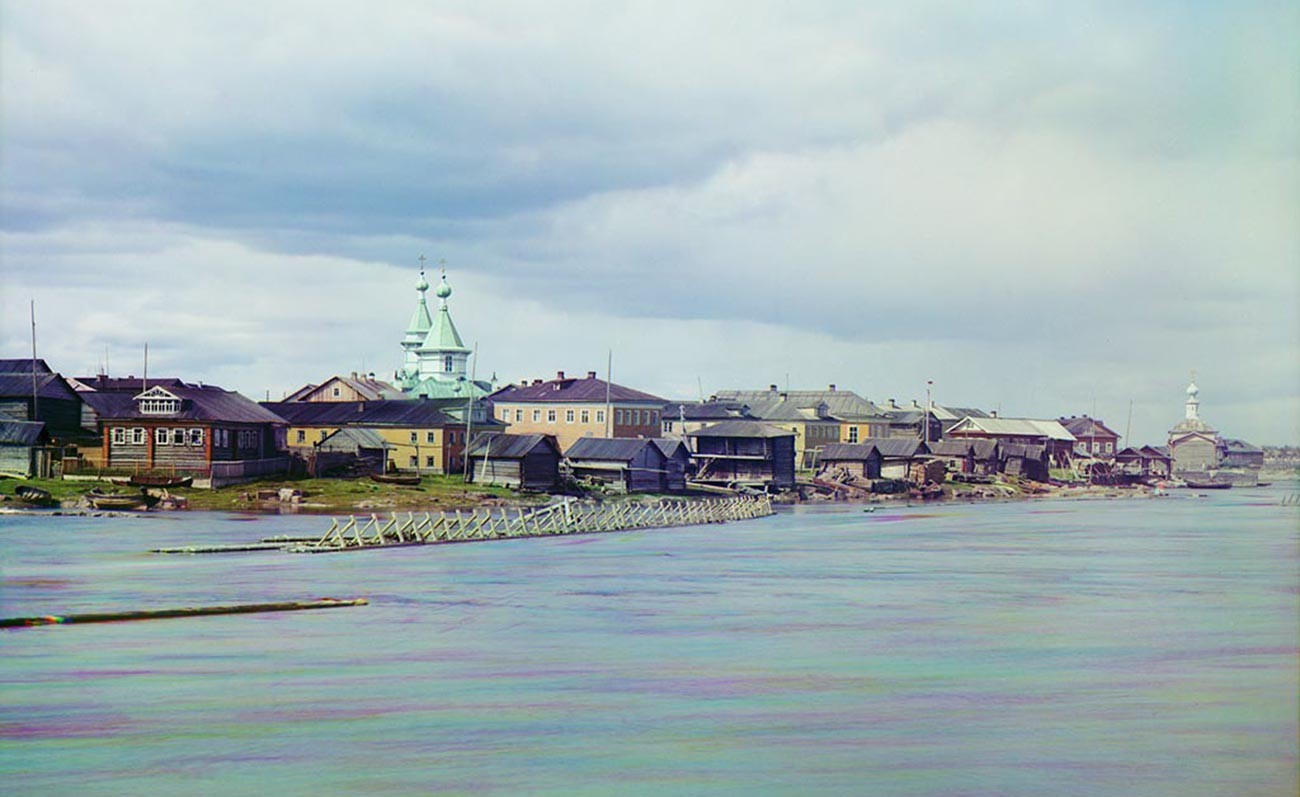 Among these coastal settlements was the fishing village of Soroka, established as early as the 12th century and situated in what is now the Republic of Karelia. Its name, related to the Karelian word for island (soari), refers to its primary location on an island archipelago in the Vyg River estuary.

The Soroka village was evocatively photographed by Prokudin-Gorsky with full attention to its aquatic environment. Among the landmarks visible in his views are two wooden churches, one dedicated to the Trinity (1894) and the other dedicated in 1913 to Sts. Zosima and Savvaty, founders of the great Solovetsky Transfiguration Monastery nearby in the White Sea.

In the early 1930s, the settlement and its rail station played an important role in the construction of the White Sea-Baltic Canal (Belomorkanal), notorious for its use of forced labor. In recognition of its position as the northern terminus of the canal, the name was changed from Soroka to Belomorsk in 1938. The following year its two wooden churches were closed by state decree and destroyed soon after. In 2006, the Church of Sts. Zosima and Savvaty was rebuilt in a 19th-century style of wooden architecture.

Virma: Symbiosis of nature and faith 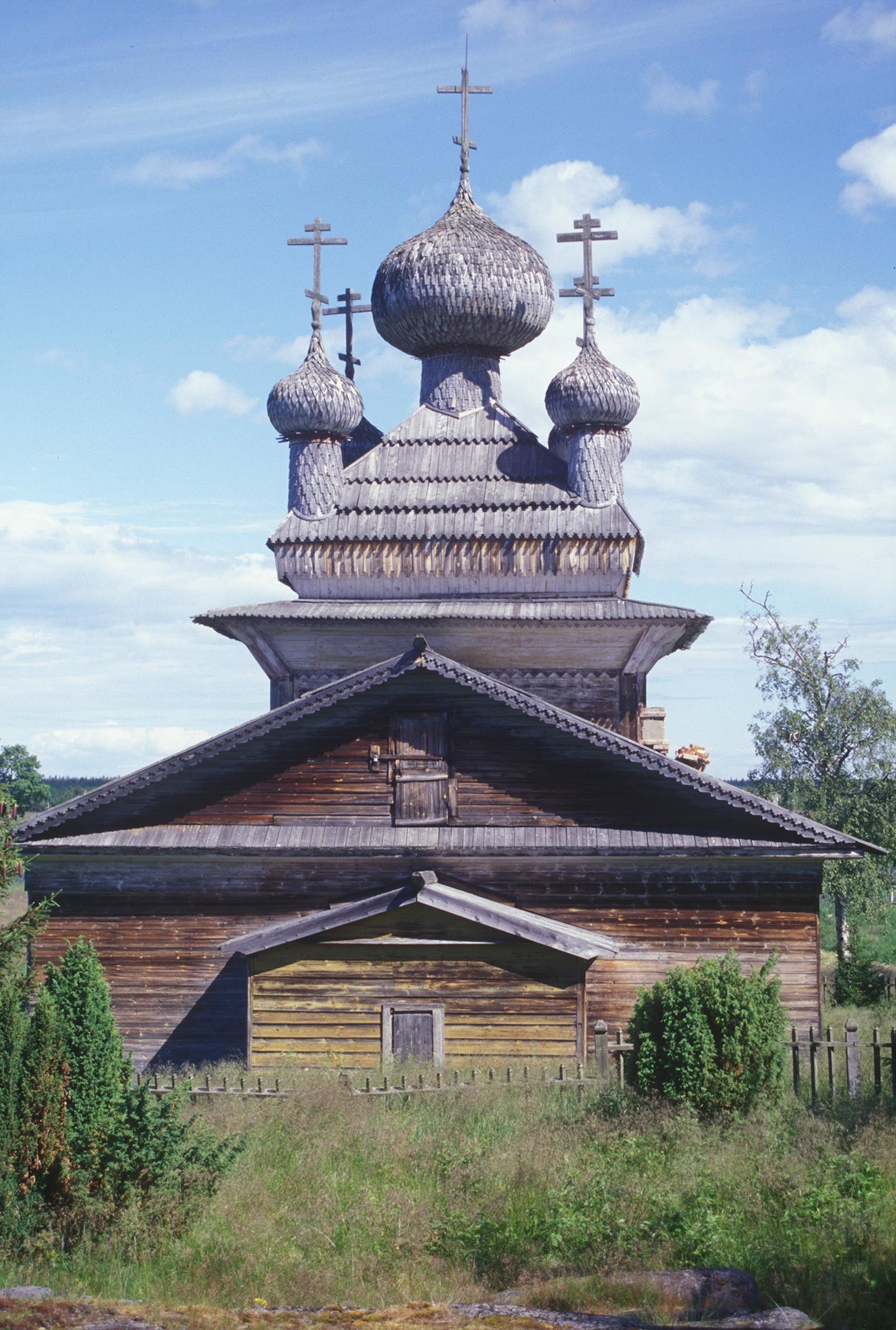 Although the churches that Prokudin-Gorsky photographed in Soroka no longer exist, there are other log shrines in tiny villages along this stretch of the western shore of the White Sea. One of the most lyrical is the village of Virma, also dated to the 12th century and located in salt marshes near the mouth of the Virma River, 20 miles to the southeast of Belomorsk. The 2010 census gave Virma a population of 22 souls, and its few remaining wooden houses seem to float in the grassy marsh. 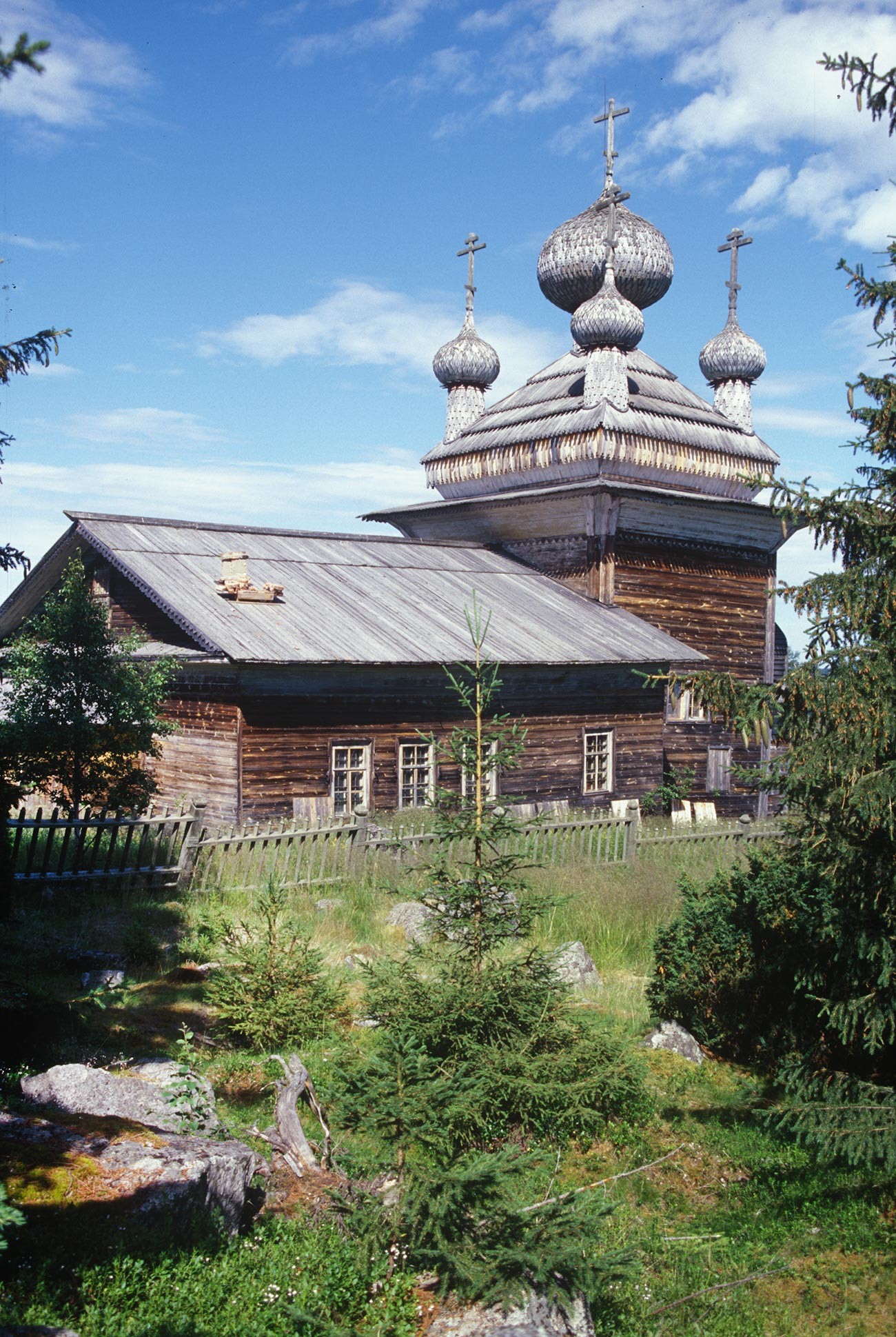 Like other villages in the western part of the White Sea, Virma had for centuries been within the orbit of the powerful Solovetsky-Transfiguration Monastery. Although the relationship between the villages and the monastery was frequently contentious, the villages provided goods and labor, while the monastery attended to their spiritual needs. To this day. foundation traces remain of a salt refinery belonging to the monastery. 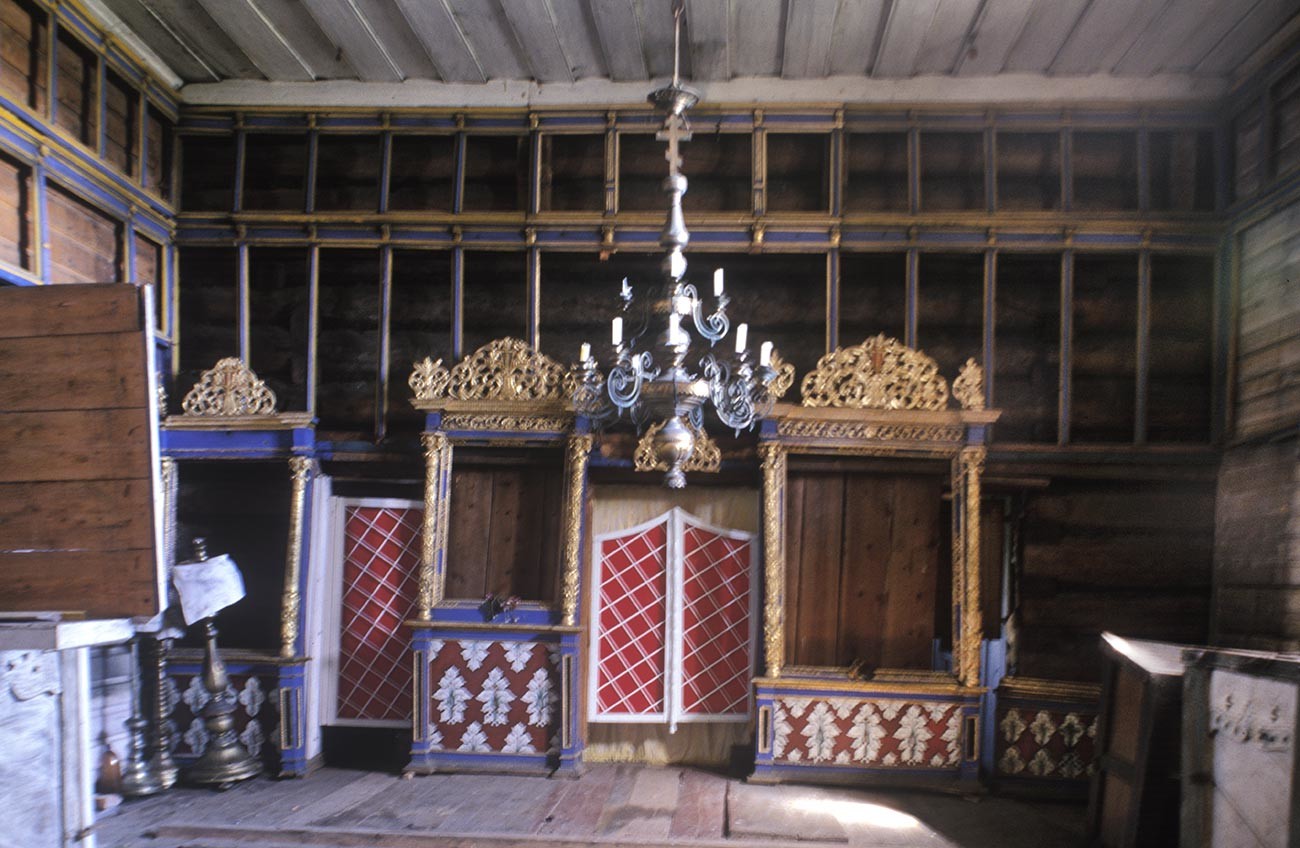 The dominant landmark in Virma is the village church, built perhaps as early as 1625 and rebuilt in 1759. Dedicated to Sts. Peter and Paul, the archaic structure rises like a living, organic form among the firs and other conifers that crowd the narrow coastline.

The Church of Sts. Peter and Paul has no bell tower. In compensation, however, it culminates in a remarkable array of five cupolas covered with silvery aspen shingles and surmounted with wooden crosses. This festive crown rests on a distinctive flared cuboid roof (called “kubovaty” in Russian) that is also clad in wooden shingles. 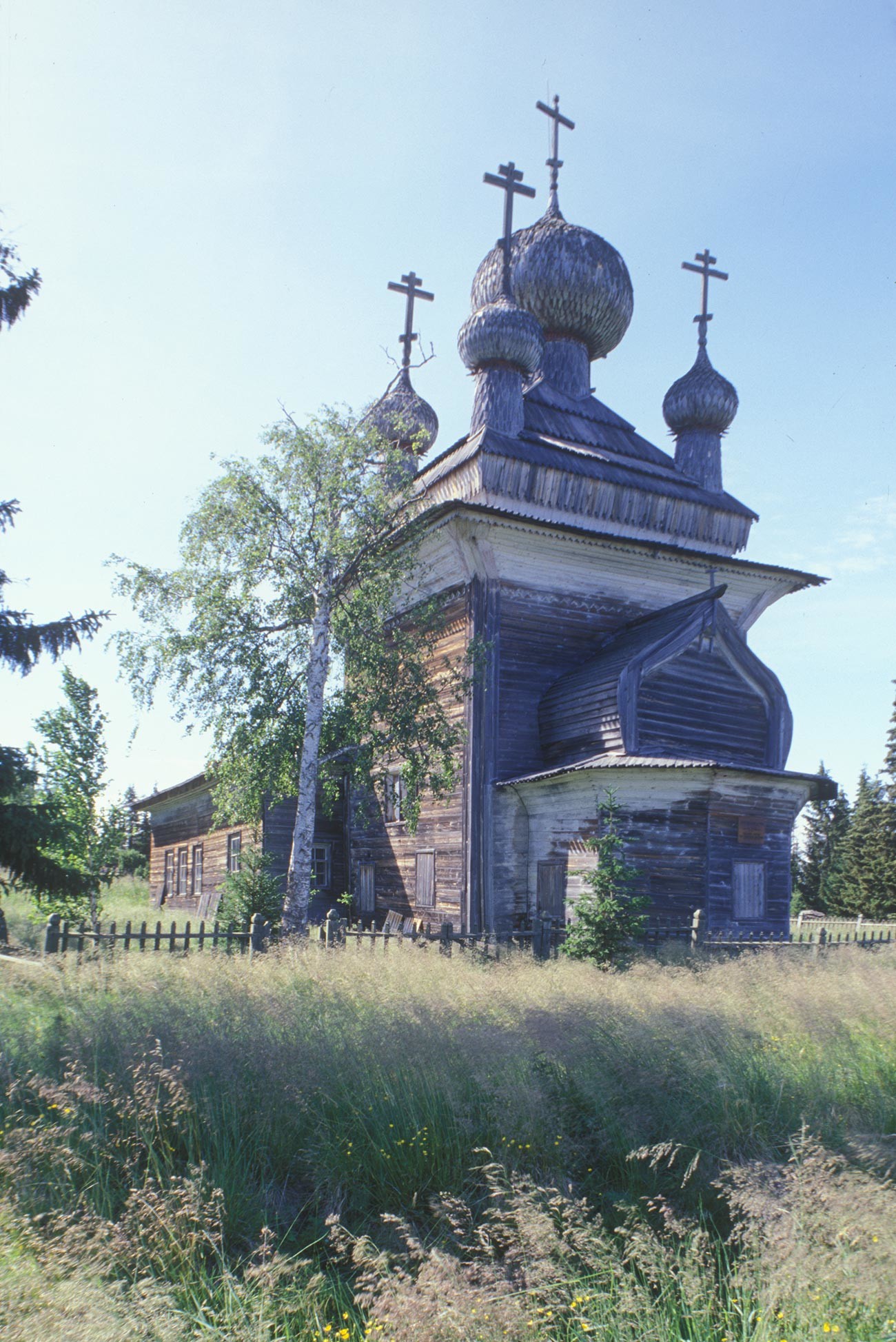 The roof rests above the ledge of a projecting cornice that protects the log walls of the square main structure from excessive moisture. As in the best examples of Northern wooden architecture, function and beauty coexist in graceful harmony.

On the east is an apse crowned with the barrel gable, while the west part of the church consists of the usual low vestibule that could be heated for worship during the long winters. A small covered porch completes the linear design. When I was there in the summer of 2000, occasional worship services were held by a monk from the Transfiguration Monastery. 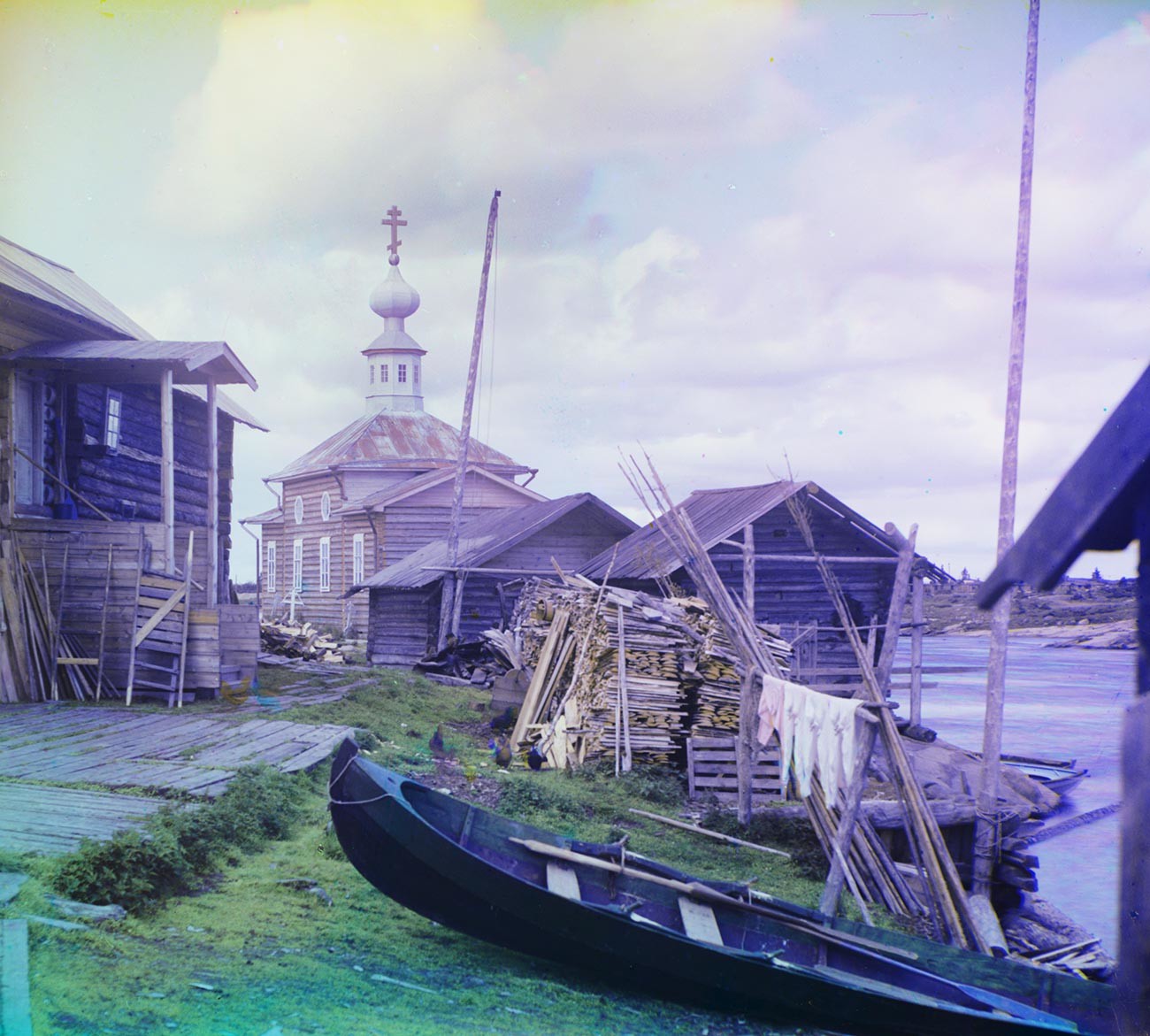 Kovda: Merging of land and sea 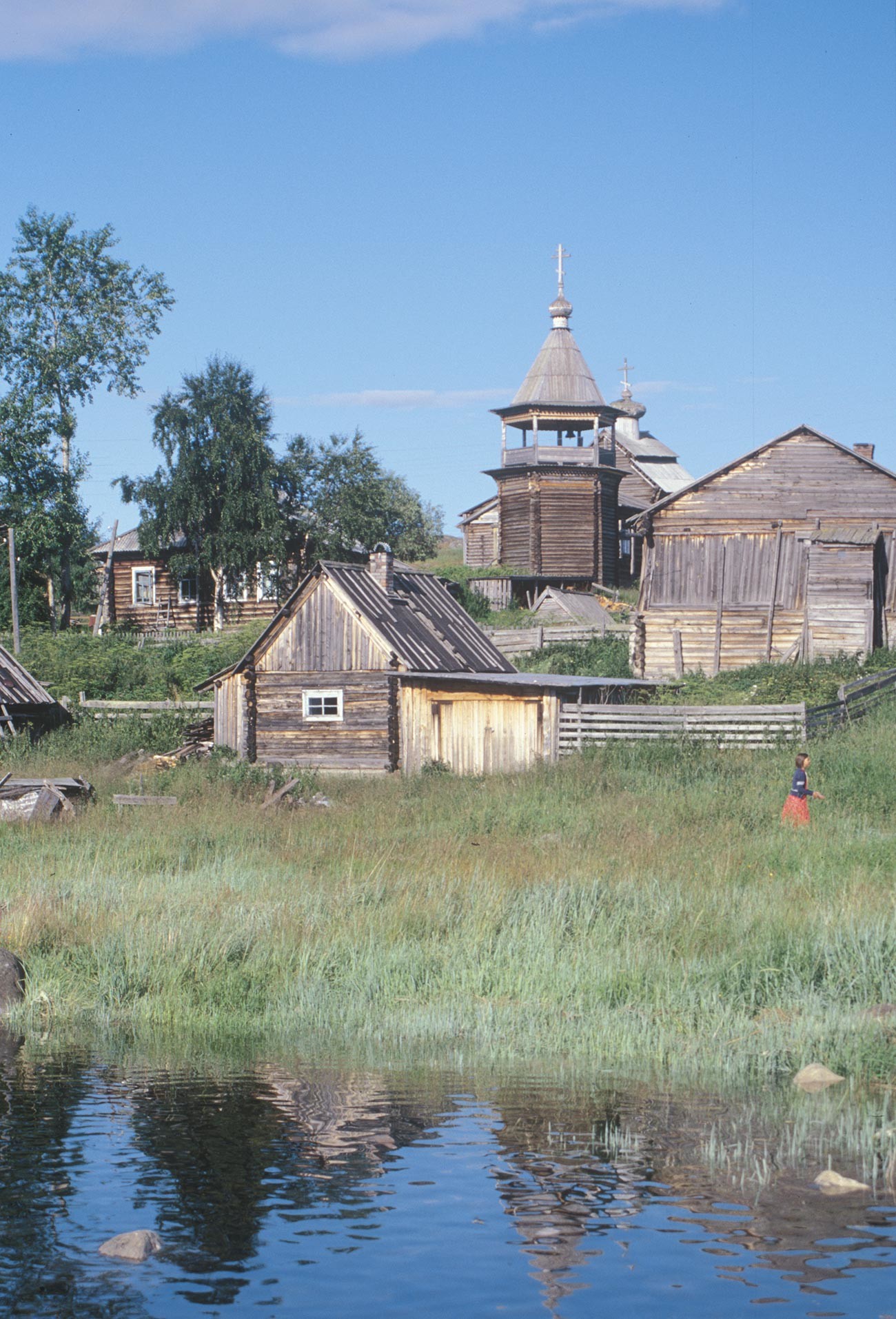 Farther north along the White Sea, coastal marshes give way to steep granite outcroppings overlooking bays and inlets. In such a dramatic setting, some 250 miles north of Virma, stands the village of Kovda with yet another miraculously preserved log church. 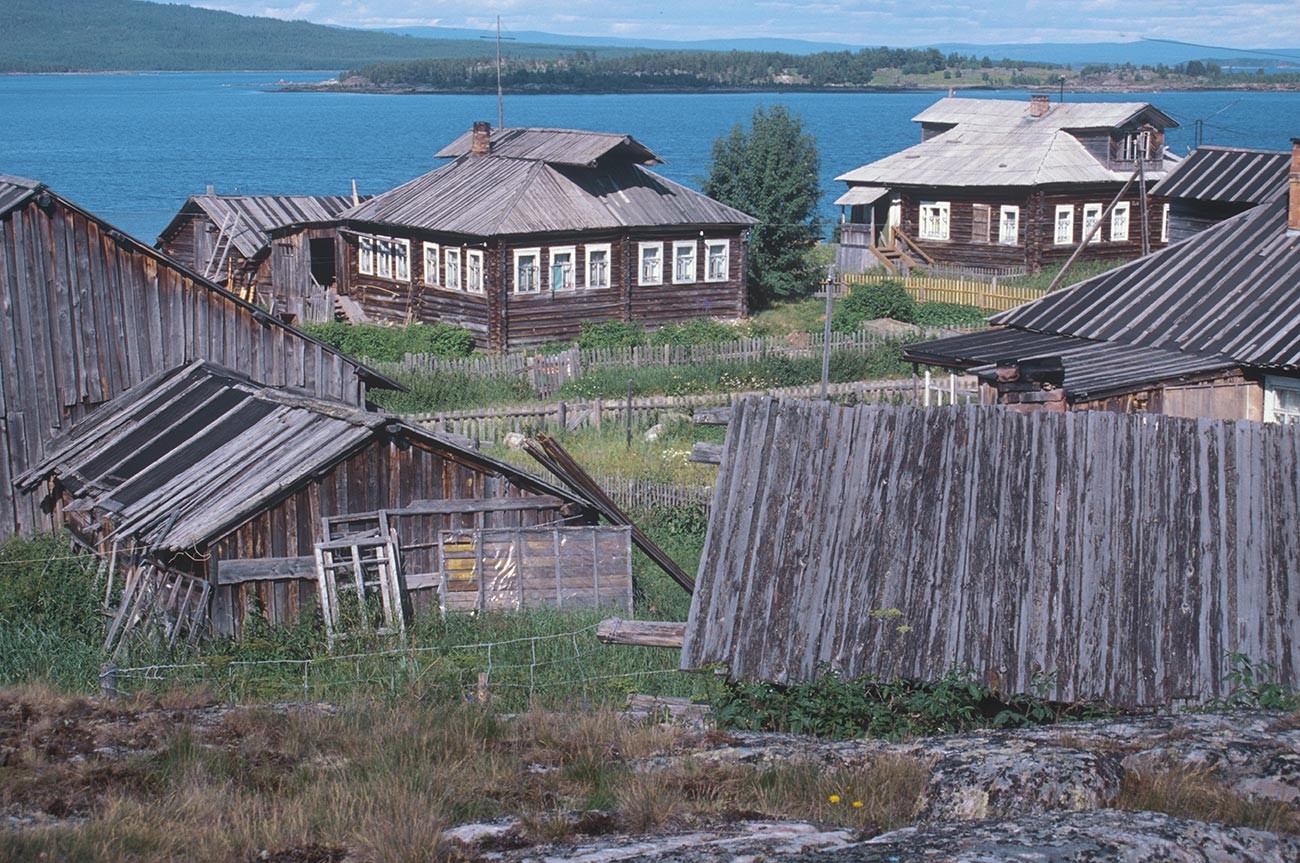 Kovda is located near Kandalaksha Bay, an arm of the White Sea that cuts into the southwestern part of Murmansk province. The village is perched on rocky cliffs above the point where the small Kovda River flows into the Startsev Inlet.

The population of Kovda in 2010 was officially listed as 20, less than half what it was when I was there a decade earlier. The scattered log houses that I photographed had carefully tended gardens carved into the hillside. Strings of dried fish, cured by the sun, were suspended along the sides of log walls. A log sheds and saunas complete the picture in this craggy yet stunningly beautiful landscape. 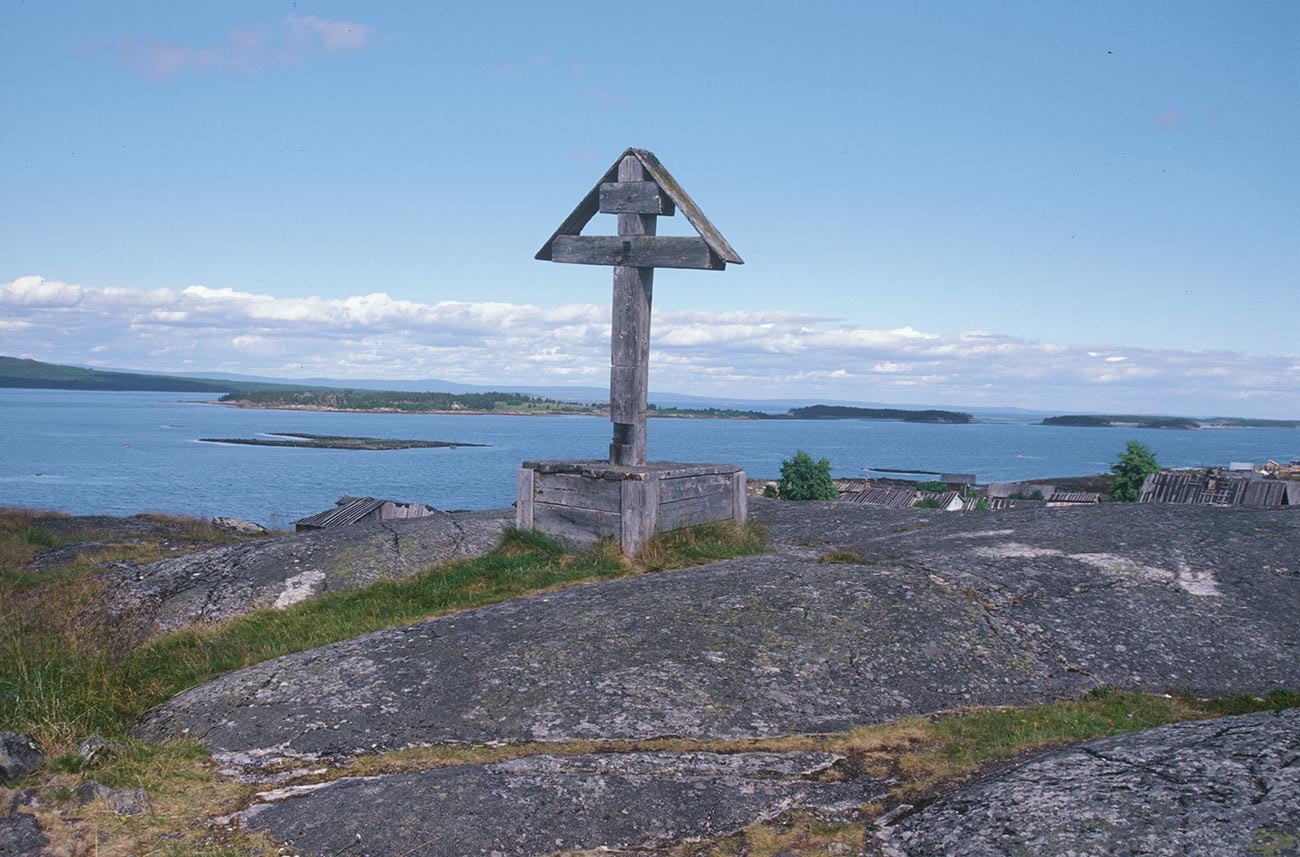 At the beginning of the 20th century, Kovda was a bustling commercial center, with a customs station, biological research station and a number of sawmills – including one English and another Swedish. Remnants of those enterprises survive in the neighboring settlement of Lesozavodsky (“Sawmill”) and Zelenoborsky. The completion of the Murmansk Railroad inland from Kandalaksha Bay diminished Kovda’s activity in favor of the railroad town of Kandalaksha, some 13 miles to the north. 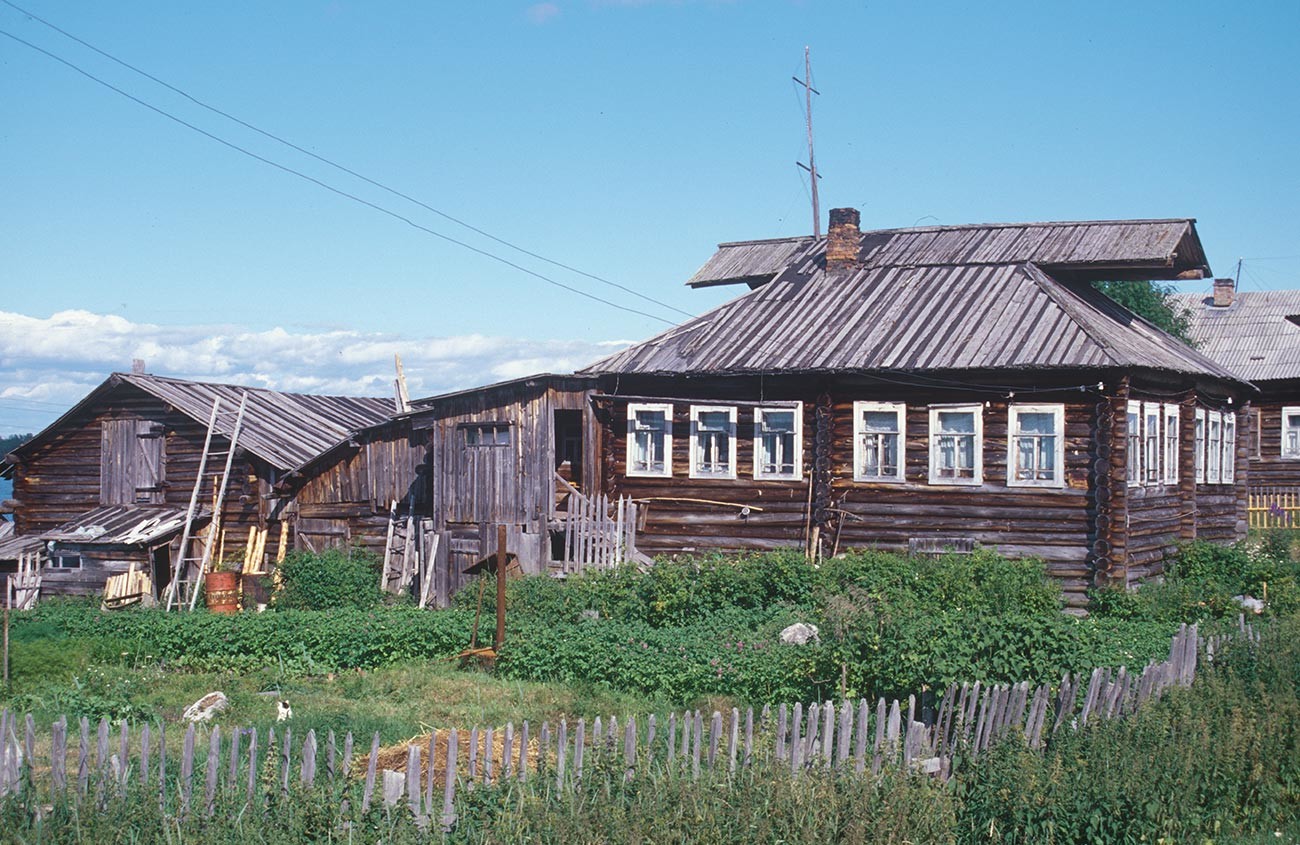 Although Kovda dwindled, it retained its primary historical monument, the small log Church of St. Nicholas with its adjacent bell tower. A church had existed on the site as early as the 15th century, but the present structure has usually been dated to the beginning of the 18th century, when the bell tower was also built.

Recently, however, it has been proposed that the basic structure of the Kovda church dates to the end of the 16th century, following a devastating Swedish raid on the village. If the earlier date is accepted, the St. Nicholas Church would be the oldest surviving wooden church in the White Sea area. 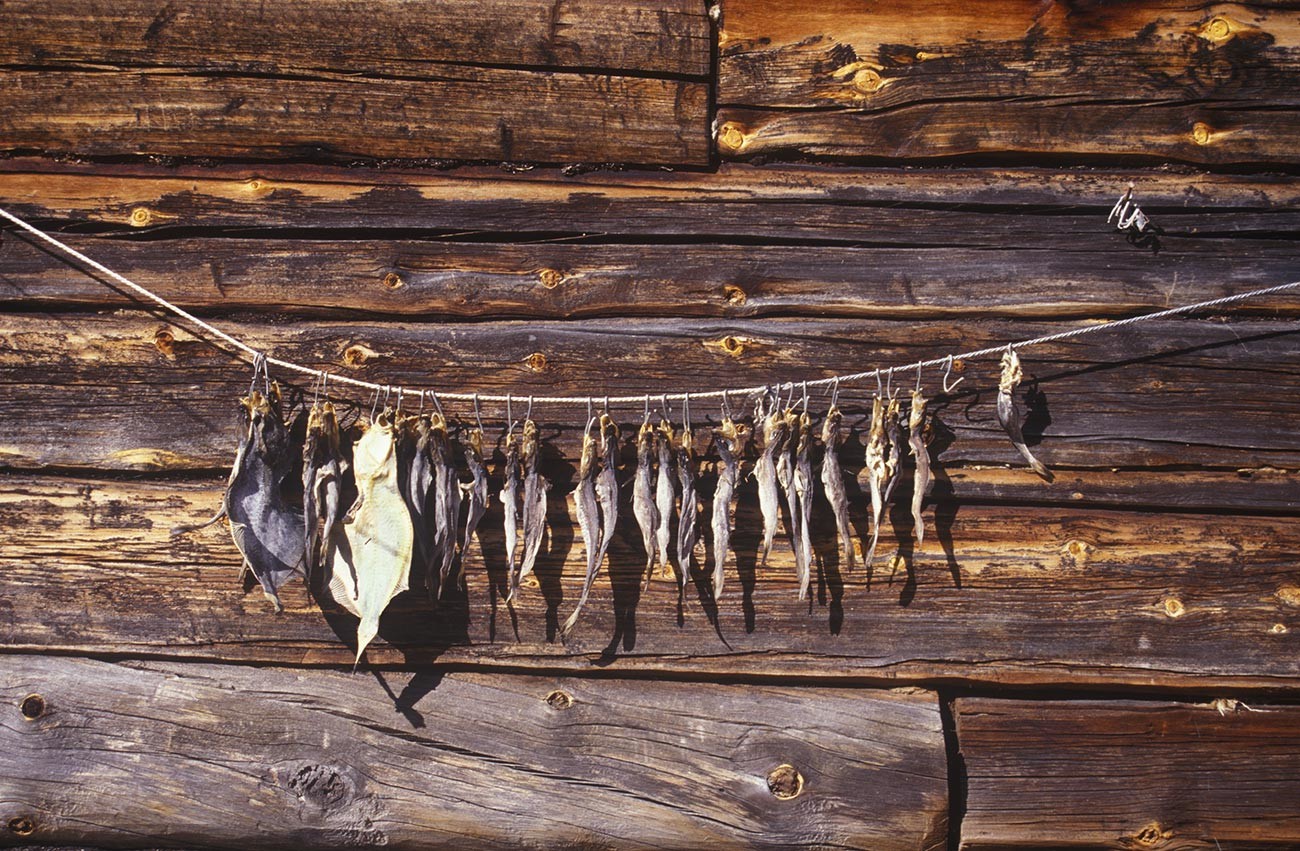 Whatever the date, the plan of the basic structure is simple, with an apse containing the altar in the east. The main part is a square form with a double-pitched roof. At the top is an unusual squat cupola with a small nob supporting a cross.

The entrance to the St. Nicholas Church is through a vestibule added to the western side of the main structure apparently in the mid-18th century. The two components are not connected structurally in this archaic design. The vestibule is wider than the central component and built of thicker logs. The church ensemble was earlier surrounded by a cemetery enclosed with a low log wall. 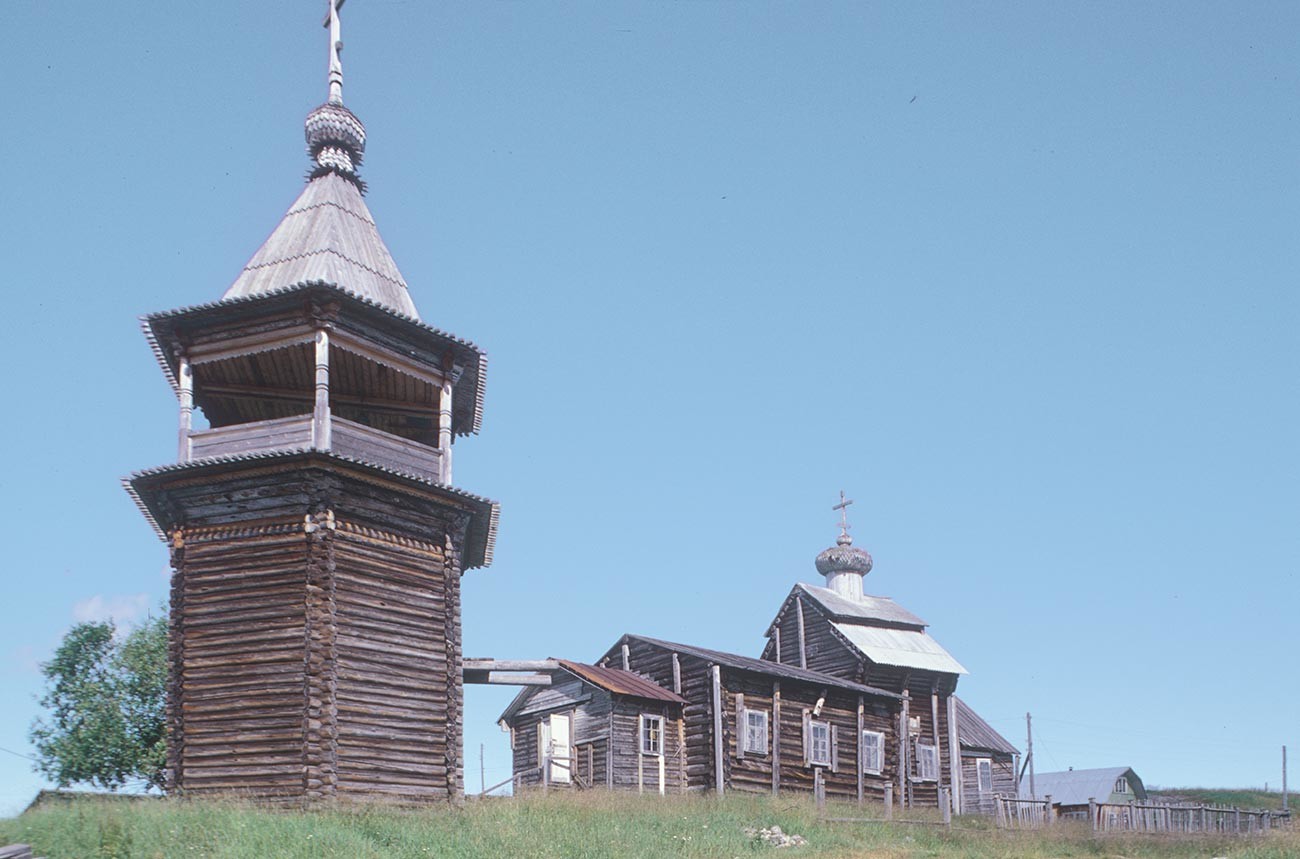 Like most wooden churches in the 19th century, the St. Nicholas Church was clad in plank siding, examples of which are seen in Prokudin-Gorsky’s photographs throughout this region. The siding was removed as part of the preservation attempt during the Soviet period. 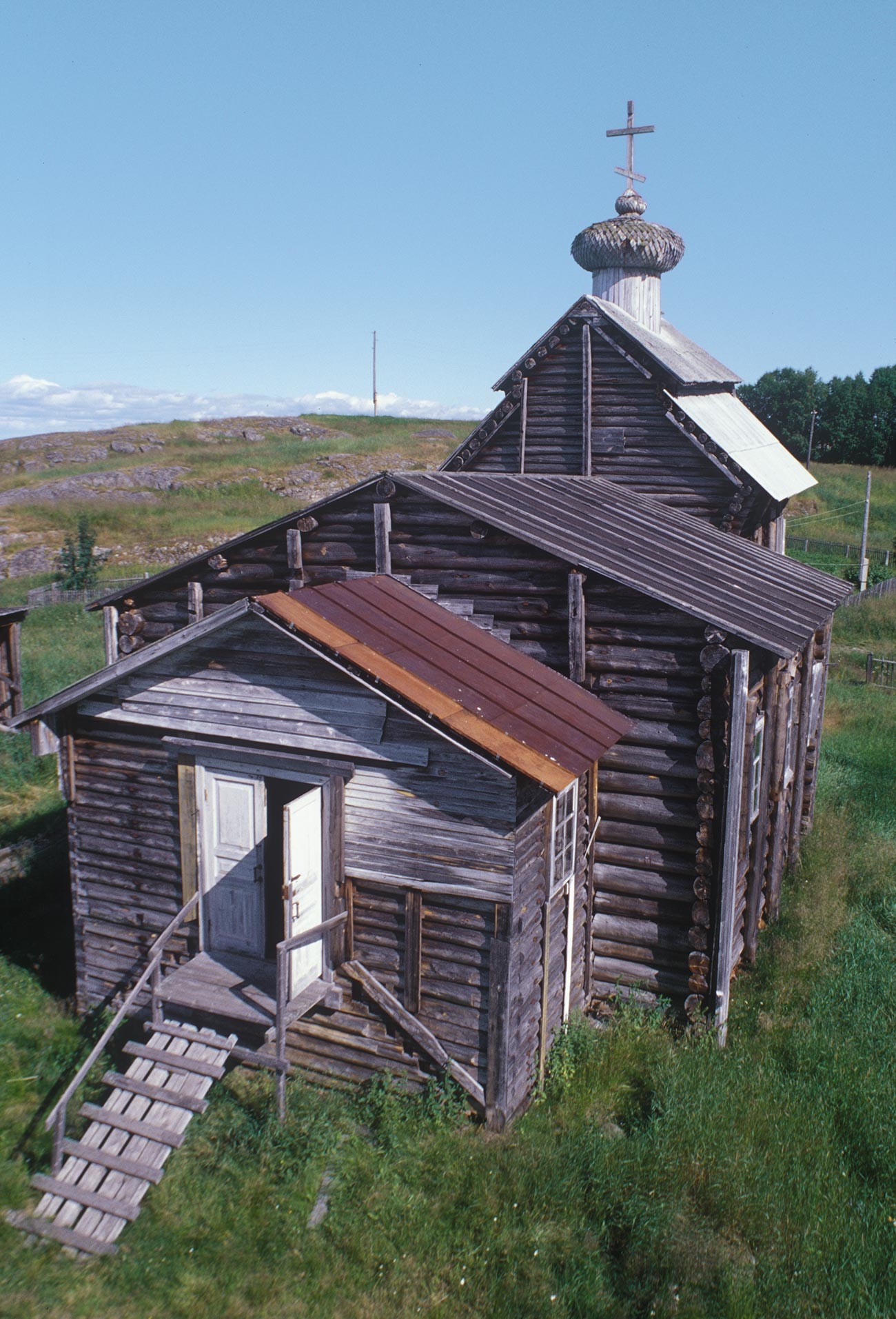 Closed in 1960, the Kovda church was finally slated for restoration as a cultural monument in the 1990s. The bell tower was rebuilt in a simplified form, and restoration of the church itself began in 2003, albeit with frequent halts and disputes over the proper form.

The St. Nicholas Church at Kovda now has artificial-looking siding, but at the beginning of this century I was able to photograph the original log structure. Quite apart from the church, the physical setting of Kovda is an astonishing, spiritual merger of land and sea. 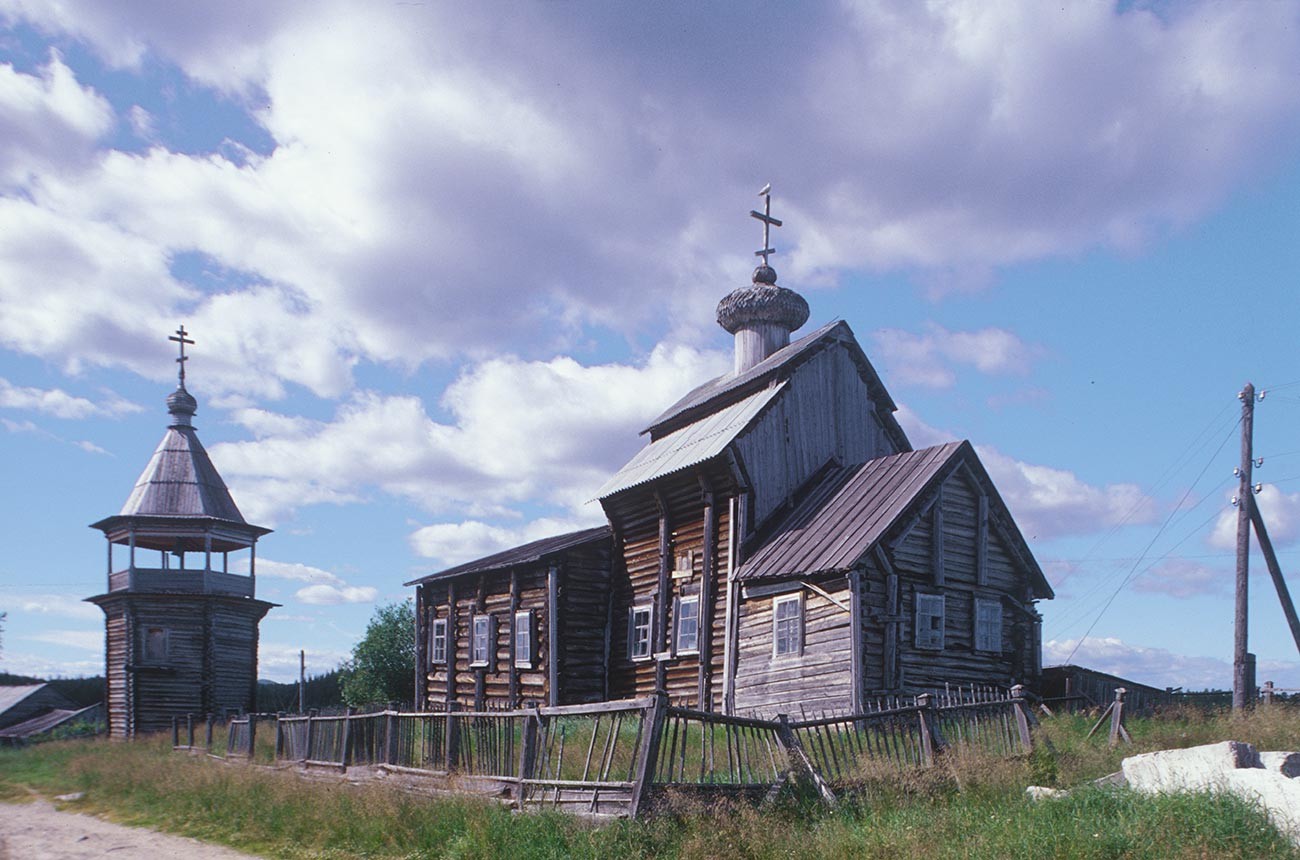