The stunning wooden shrines on the White Sea coast 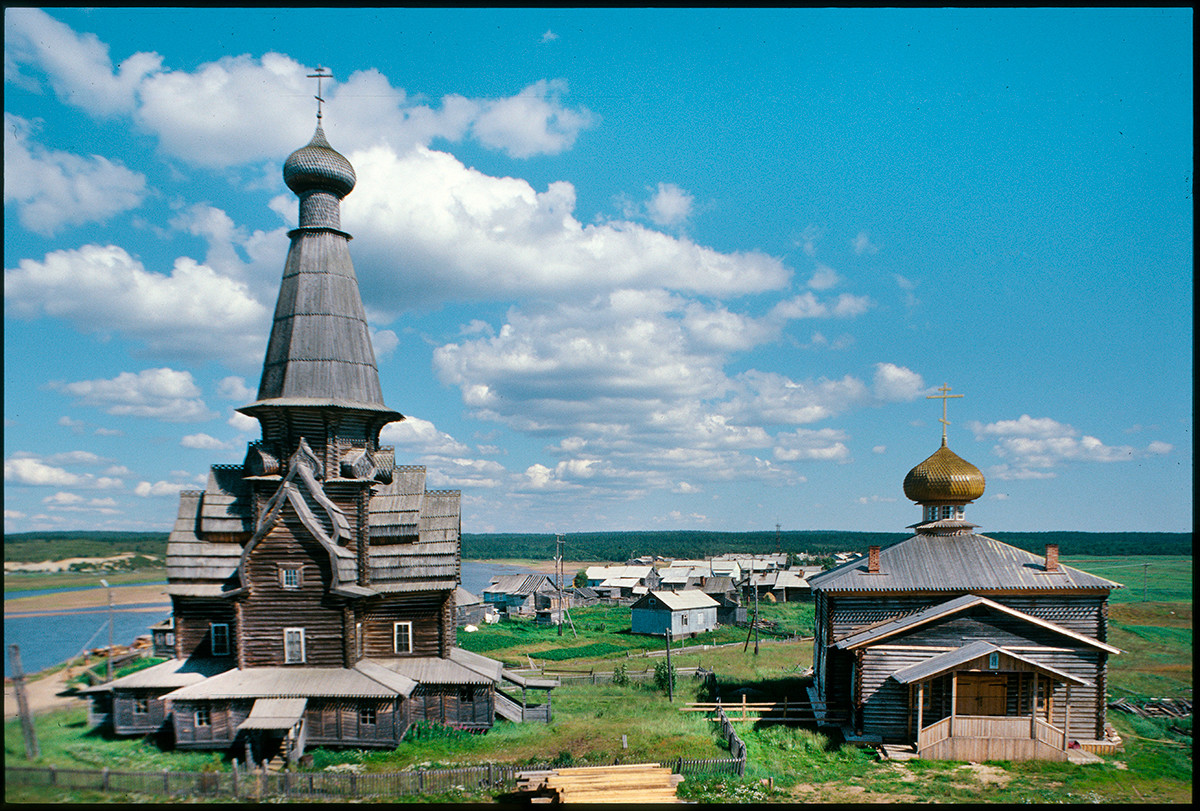 At the beginning of the 20th century, the Russian chemist and photographer Sergey Prokudin-Gorsky developed a complex process for vivid, detailed color photography. Inspired to use this new method to record the diversity of the Russian Empire, he photographed numerous historic sites during the decade before the abdication of Tsar Nicholas II in 1917.

Prokudin-Gorsky’s last expedition occurred along the western coast of the White Sea during the summer of 1916 as the Great War raged in Europe. His special passage at such difficult times was due to a state commission to photograph construction of a railroad to the new port of Murman, developed at the northwest corner of the Kola Peninsula to receive war supplies from the Western allies.

Most of the sites that Prokudin-Gorsky photographed in 1916 belong to an area now known as the Republic of Karelia (within the Russian Federation). With its ample forests, Karelia is rich in monuments of traditional wooden architecture, particularly churches. 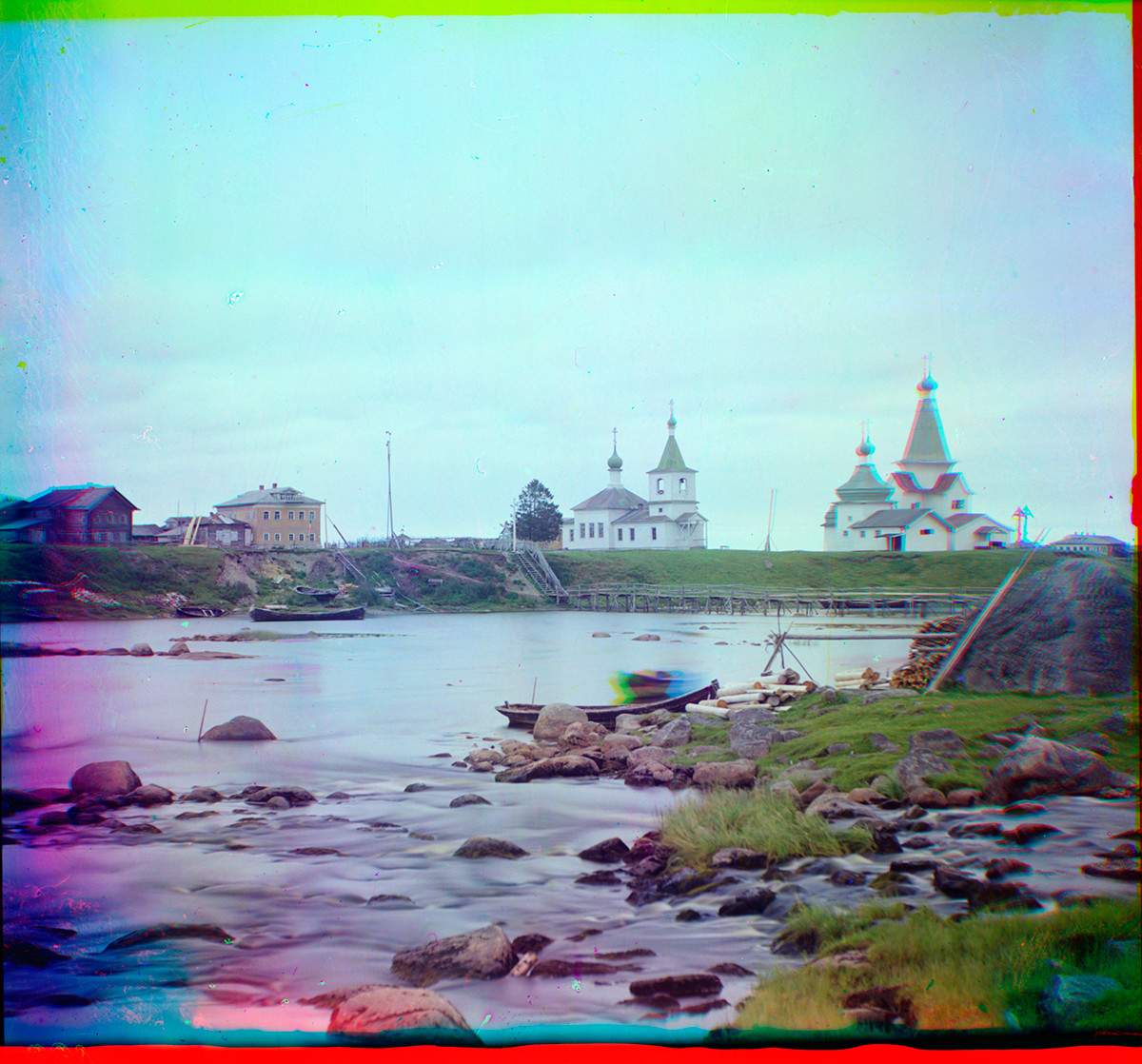 Shuyeretskoye. View across Shuya River with wooden Church of St. Clement (center), Church of St. Paraskeva & St. Nicholas Church. Smudge in the skiff is a person moving during the three exposures of the color process. Summer 1916

The most widely visited museum site for these works of traditional art is the fabled Island of Kizhi in Lake Onega. Although Prokudin-Gorsky could not spare time for a trip to Kizhi, he photographed villages along or near the new railroad that shared a similar folk culture.

One of these coastal villages was Shuyeretskoye (also known as Shuya), located near the mouth of the Shuya River on the White Sea some 20 miles south of the ancient town of Kem. 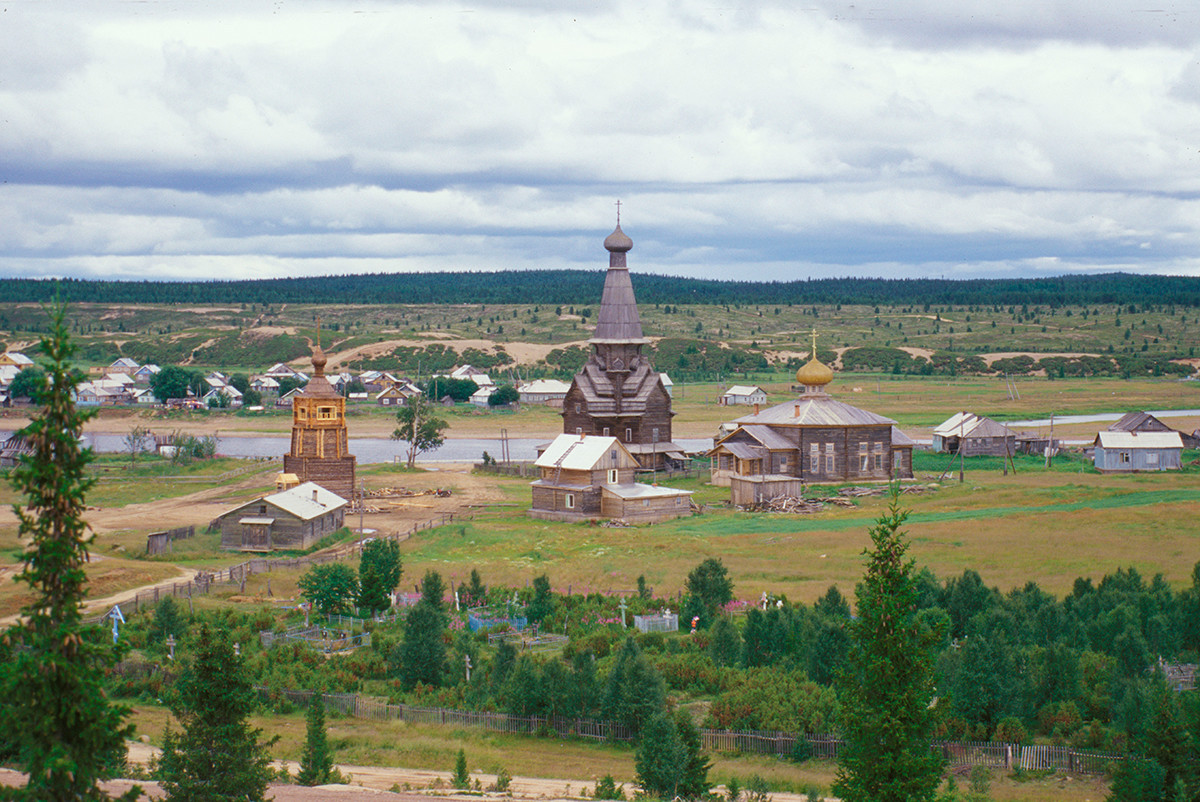 The earliest reference to the village occurs under the year 1499, and two of the churches existed in their original form by the end of the 16th century. As usual with wooden churches of the North, decay and fire led to modifications and rebuilding over the centuries.

None of these monuments has survived. Closed and vandalized during the early Soviet period, the churches were known to be in a deplorable state after the war. All three were destroyed, apparently from fire ignited by a lightning strike in 1947.  Shuyeretskoye itself continued to decline precipitously from a population of 1,580 (in 1959) to 186 (in 2013).

The dominant feature of the Shuya ensemble photographed by Prokudin-Gorsky in 1916 was the Church of St. Nicholas, capped with its distinctively northern tall tower known as a “tent” (in Russian shatyor). Provisionally dated to the turn of the 17th century, the St. Nicholas Church was clad in plank siding in the late 19th century, as were the adjacent churches. 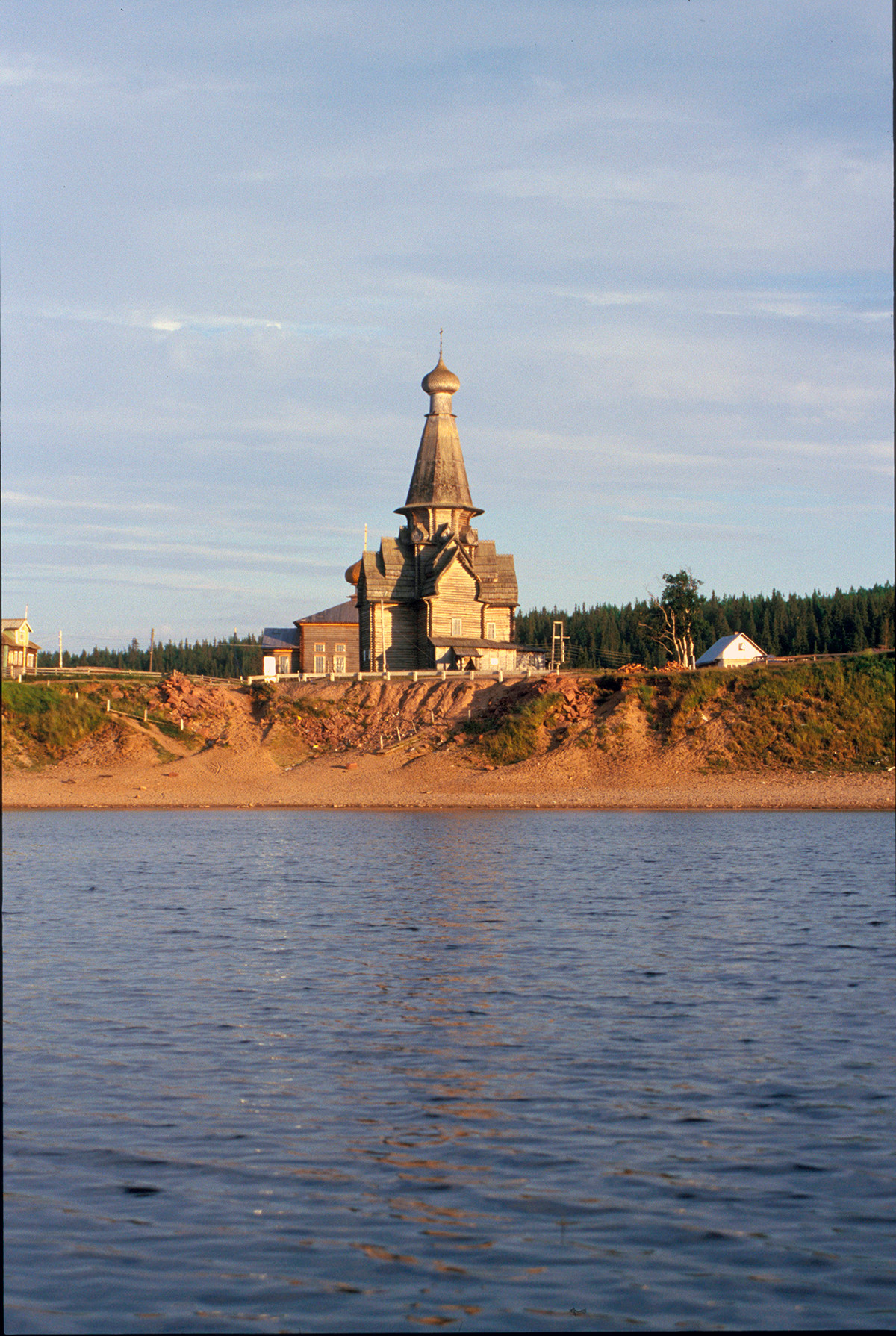 Varzuga. View south across Varzuga River toward right bank ("Prechistenka Side") with Church of the Dormition. July 21, 2001

Although the Church of St. Nicholas no longer exists, there are similar “tent” structures still standing in the western White Sea region. Over the decades, I have made several research trips to this area, but one particularly memorable campaign, in July 2002, included the village of Varzuga, located in the southeastern part of the Kola Peninsula (Murmansk territory). This remote village can lay claim to the most dramatic example of a “tent” tower log church in all Russia—the Church of the Dormition of the Virgin, built in the late 17th century during the reign of Tsar Alexei Mikhailovich, father of Peter the Great.

One of the oldest and most prosperous villages on the vast Kola Peninsula, Varzuga is situated along high banks on both sides of the Varzuga River some 12 miles north of the White Sea coast. Behind the village are high dunes covered with juniper bushes, while farther inland are small coniferous forests. The landscape is especially beautiful in midsummer with its constant light—a compensation for the long, dark winters.

In some sources the population of Varzuga is estimated around 900, but this includes other villages in the area. The 2010 census gives Varzuga itself 363 residents. By contrast the population in 1910 was approximately 1,000.

Varzuga is first mentioned in written sources in 1466, when the area was still nominally under the control of the medieval trading city of Novgorod. By the end of the 15th century the area had entered the domains of Muscovy. 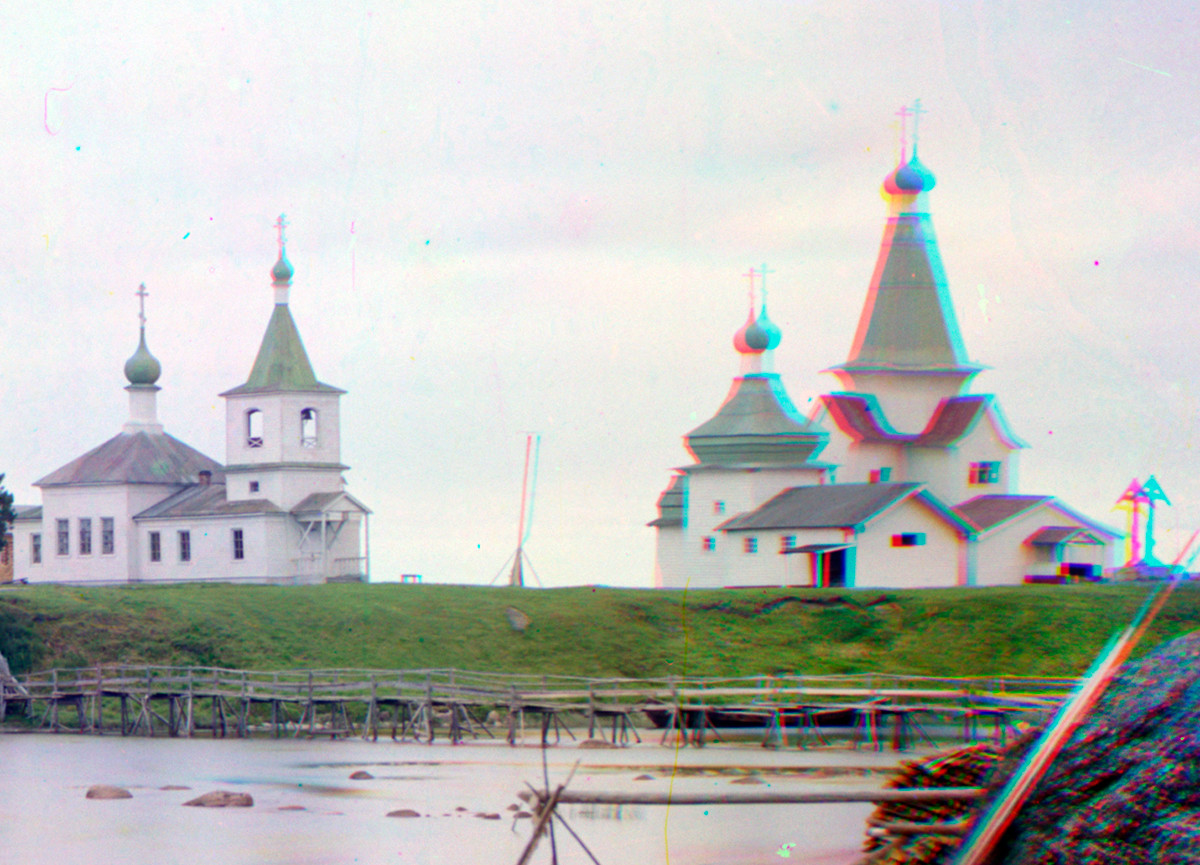 The early prosperity of Varzuga was interrupted in the mid-16th century, when the village endured a raid in 1568 as part of an effort by Ivan the Terrible to extort further revenues for his military campaigns. From the 16th to the latter part of the 18th century, Varzuga was economically linked to various monastic institutions, in particular the great Transfiguration Monastery on the Solovetsky Archipelago in the southwestern White Sea.

Access to Varzuga is not without its challenges. There is a paved road with minivan service from the major rail station at Kandalaksha (on the Murmansk mainline) to the regional center of Umba some 60 miles to the southeast. From Umba, a largely unpaved coastal road meanders 85 miles farther to Varzuga. There was no scheduled transportation at that time, but I was able to hitch a ride after waiting most of the day. 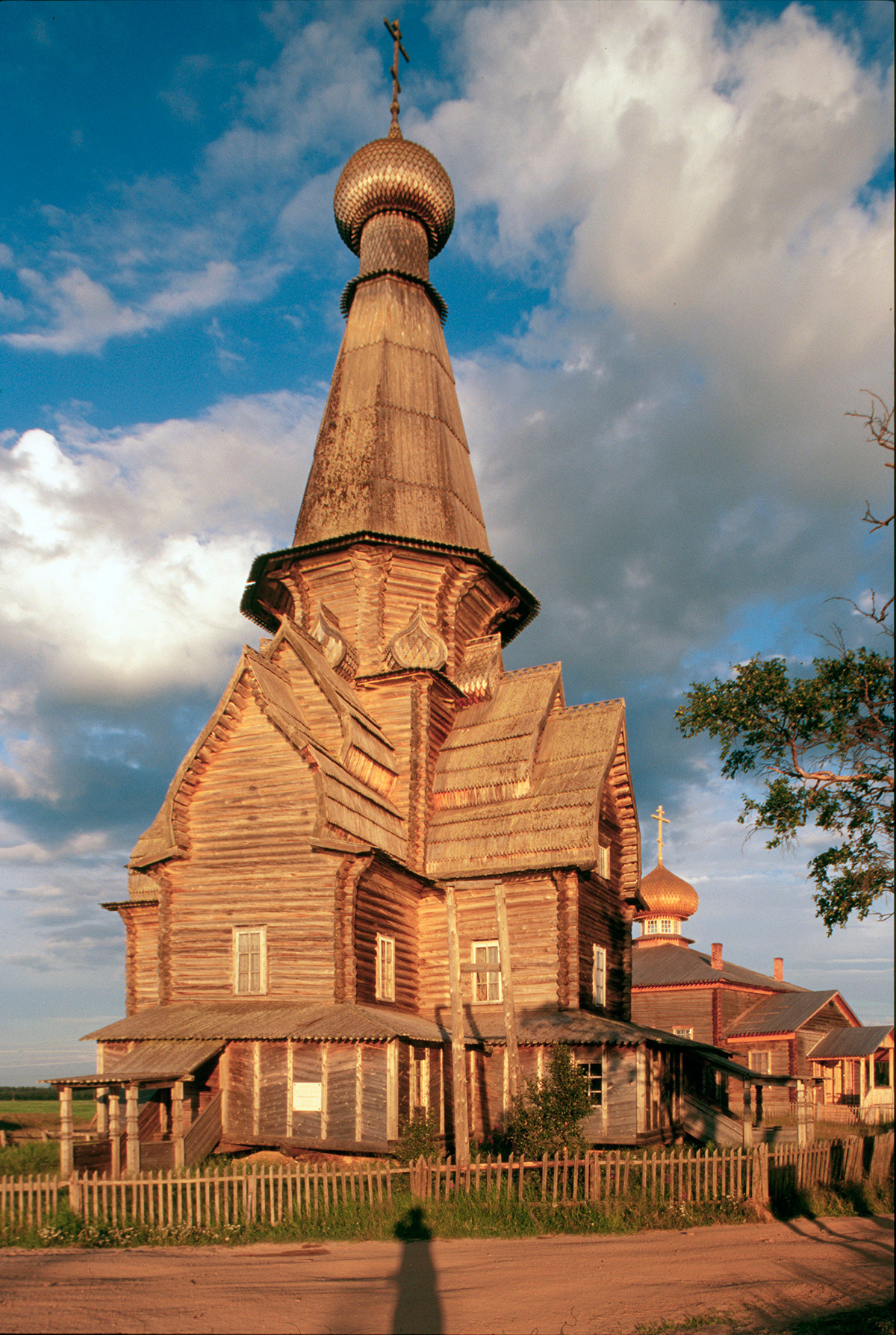 The wait was worth it. Arriving in Varzuga with the evening sun, I was shocked on first sight of the Church of the Dormition of the Virgin, soaring 110 feet above the right bank of the Varzuga River. Built in 1674 by a local parishioner named Klement, the Dormition Church is justly renowned as a supreme architectural landmark of the Russian North.

Remarkable for its construction logic as well as its beauty, the basic structure of pine logs has withstood the elements that buffet its exposed location. The lower part of the church consists of four tall rectangular components that form a cross. Each of the four extensions culminates in two peaked “barrel” gables. 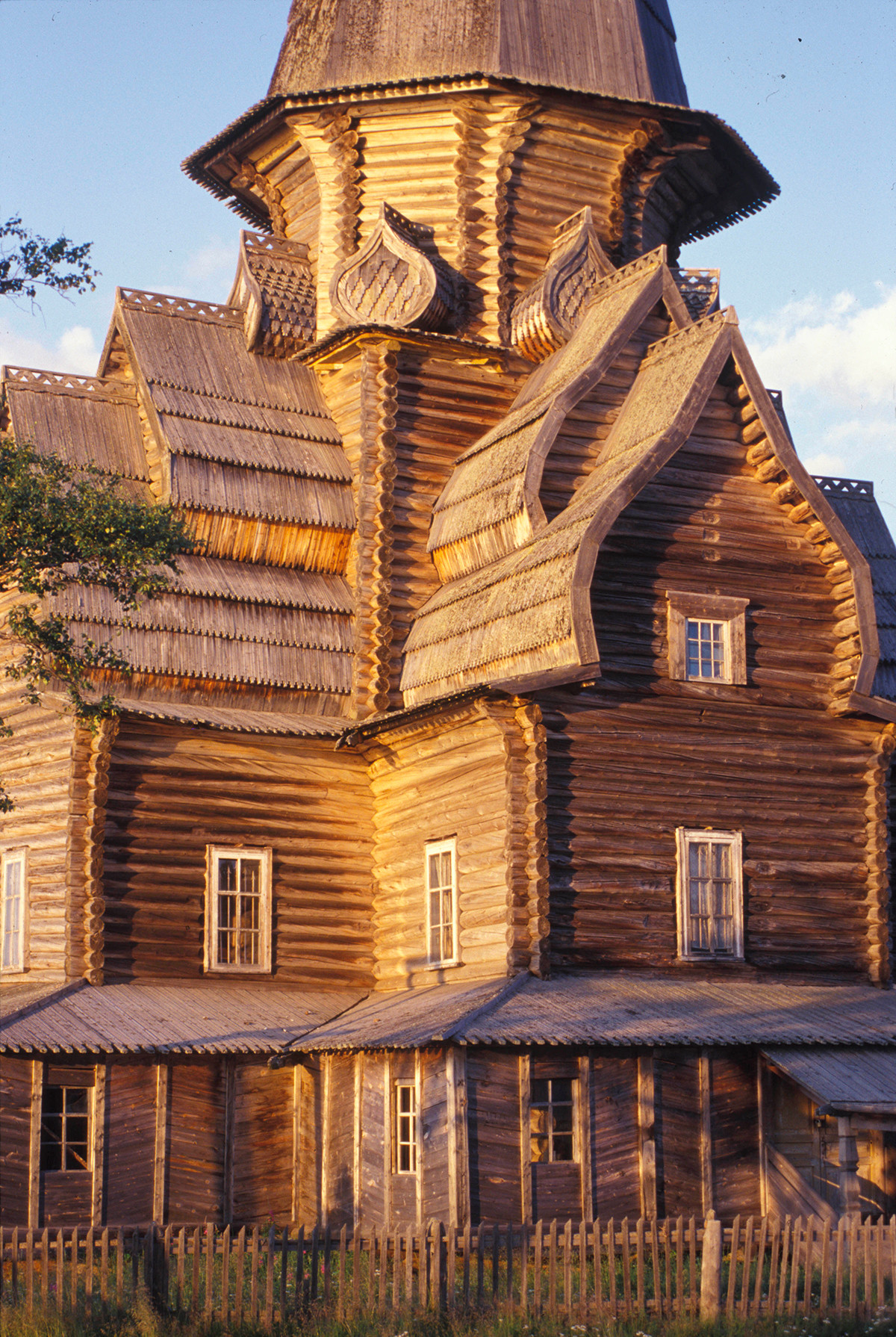 The gables in turn buttress an octagonal structure that form the base for the great eight-sided “tent” tower above. The tower is capped with a cylinder (called a “neck” in Russia), above which is a cupola clad in aspen shingles and crowned with a cross.

A partial explanation for the structure’s durability is visible in the details of the central octagonal component, seen in my photographs from 2002. The tightly fitted logs (everything is precisely calculated) at the upper part of the octagon flare to support a projecting fringe at the base of the tower. This border, so beautifully crafted, serves to protect the lower structure from precipitation that flows down tower. Beauty combines with functionality. 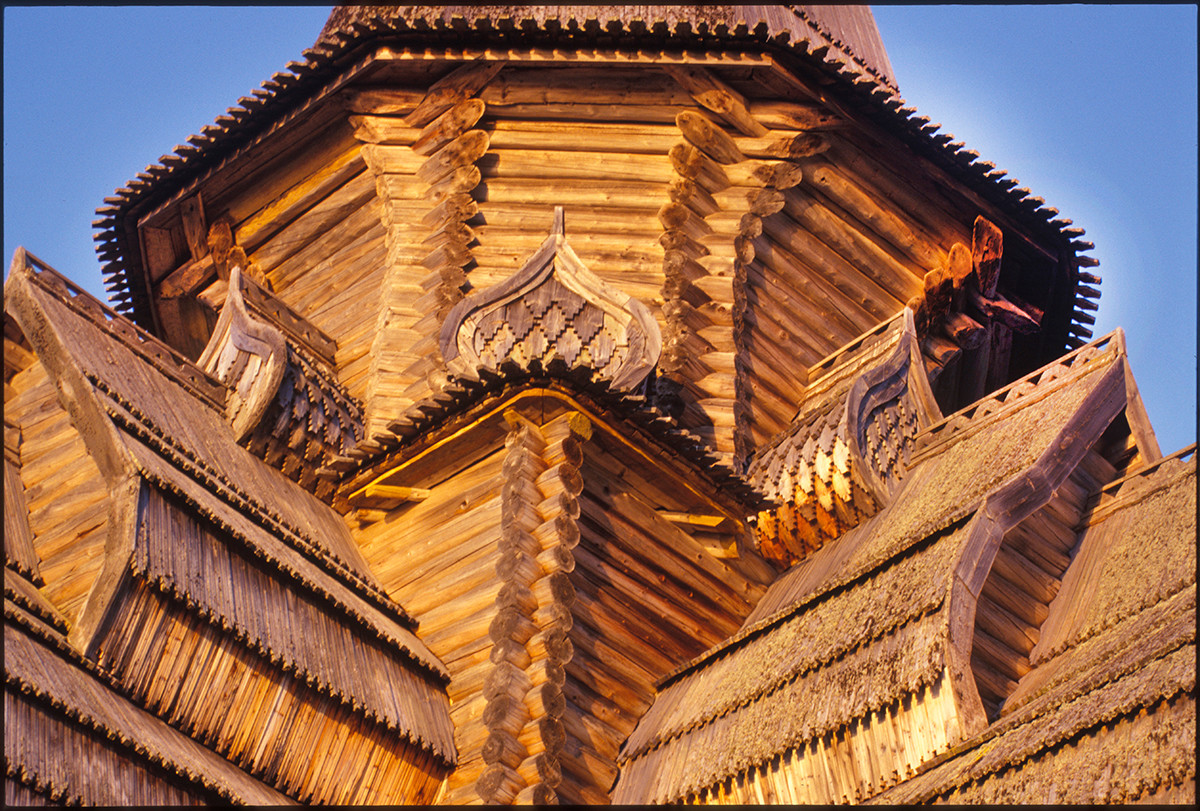 The Dormition Church underwent minor alterations in the 19th century, and both the exterior and interior were clad in plank siding. A comprehensive renovation was undertaken in 1894.

A Soviet-era restoration completed in 1973 removed some of the 19th-century modifications (including the plank siding) and returned the upper part of the structure to what is presumed to be its original form. On the interior the icon screen was dismantled for restoration, and work has slowly continued on surviving icons from the original 84, dating from the 17th and 18th centuries.

A further capital renovation in 2006-08 returned the painted plank siding to the exterior pf the Dormition Church. I do not involve myself in local restoration discussions, but I was fortunate to have photographed the magnificent structure before this recent renovation. 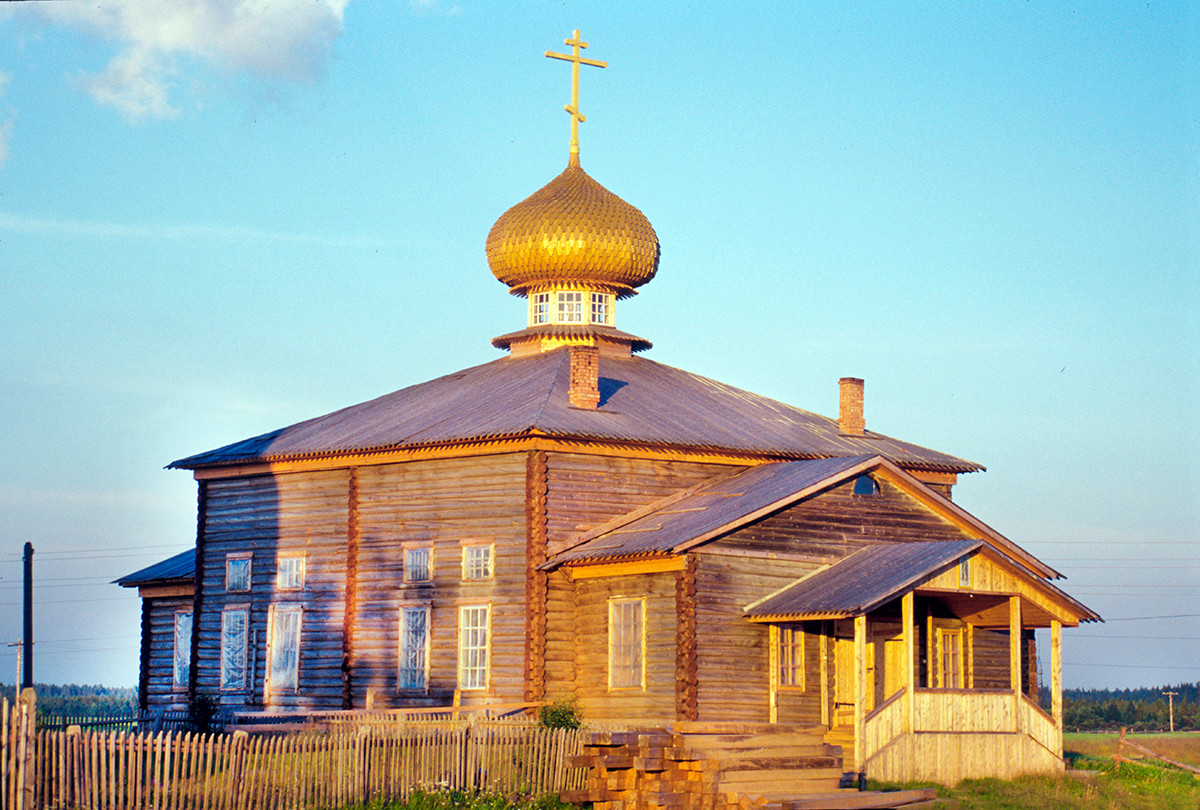 The main place of worship for Varzuga is the adjacent 19th-century Church of Saint Afanasy. It is called a "winter church," because its lower, cuboid form permitted heating for year-round use.

There are also two smaller churches on the left bank: the Church of St. Nicholas (probably early 18th century) and the Church of Apostles Peter and Paul (1864). Both were disfigured during the Soviet period—especially St. Nicholas, which lost its seven cupolas. 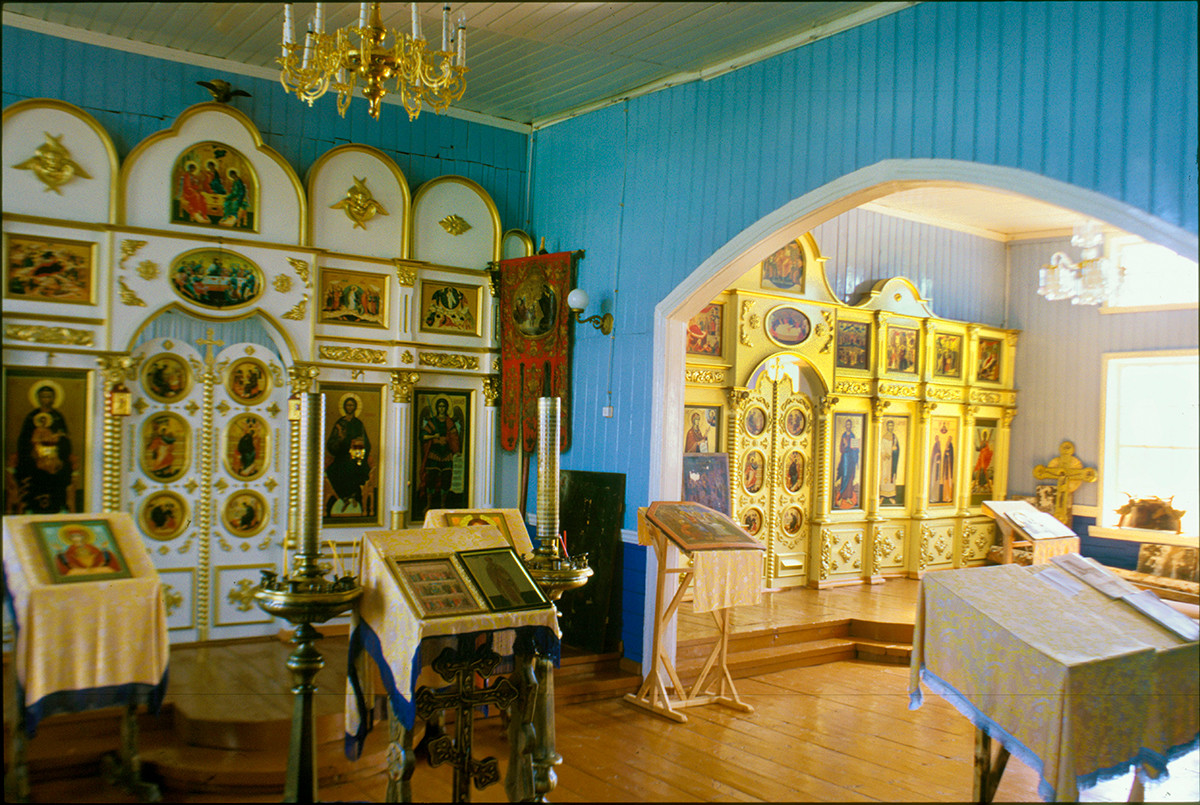 Even within this bucolic setting, controversies arise, such as the rebuilding of the bell tower near the Dormition Church. The original 19th-century bell tower adhered to the octagonal form traditional in the north. Wrecked in the Soviet period, the bell tower was rebuilt in 2001 in a very different, squat shape that has outraged many preservationists. A counter argument is that the ungainly structure was needed to support the heavier weight of its new bells. 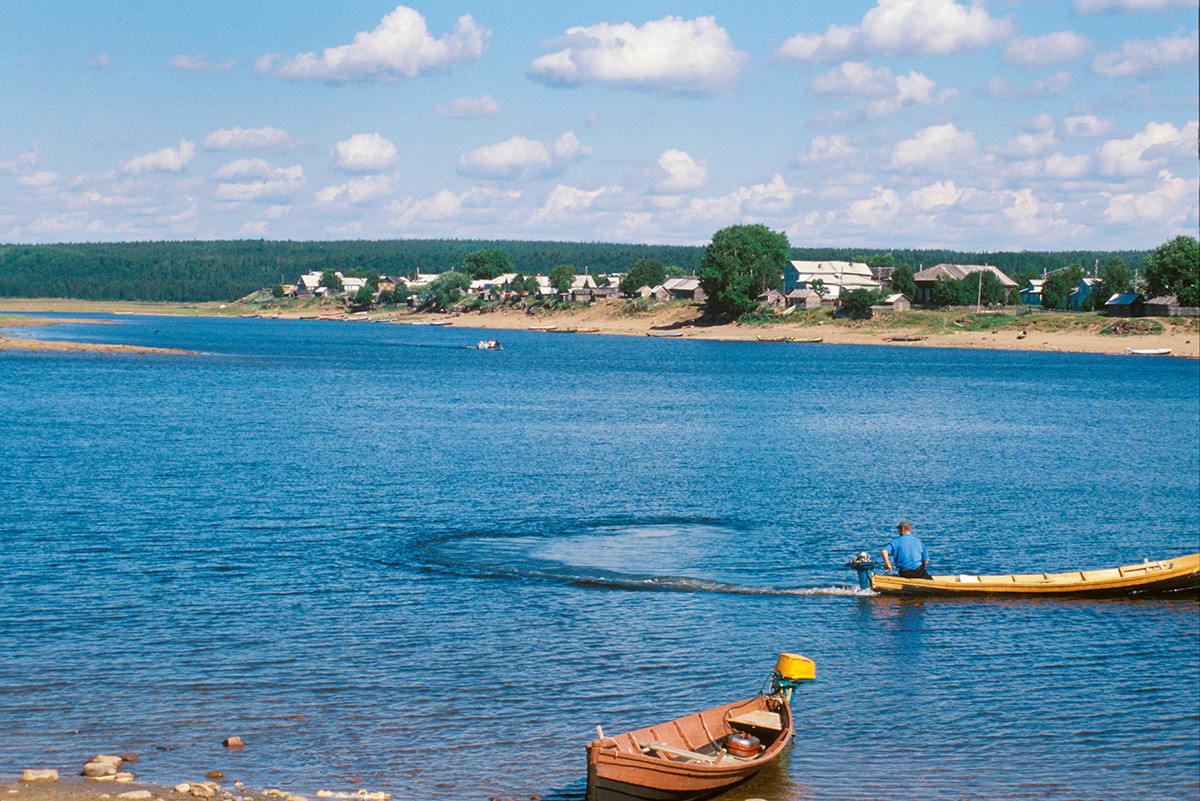 As in centuries past, the basic asset of Varzuga is its fishery, which has continued to exist in the post-Soviet era. This enterprise provides jobs and a measure of economic stability for those who have lived in the area for generations.

Over the past few decades Varzuga has gained another source of income based on its reputation as a prime location for salmon fishing. Sports tourism has become a boon to many area residents and is closely related to the fishery. 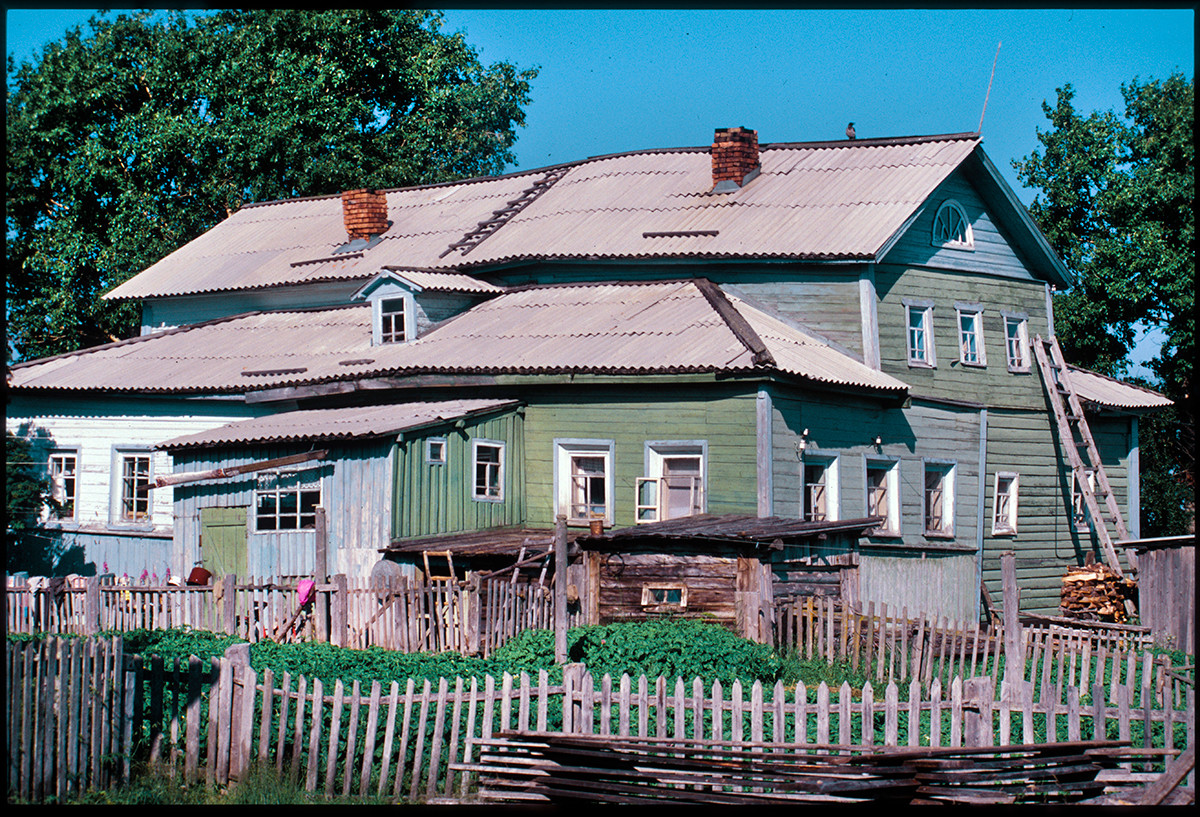 With this dependence on fishing, agriculture has occupied a limited role in the life of Varzuga. In the summer the residents cut hay for the cattle that most households possess. There are also the village vegetable gardens, but the climate and location work against more extensive crops.

The emphasis on fishing affects the design of the village’s traditional log houses, which are smaller than those of agricultural villages in the North. It is perhaps not surprising that with their relatively favorable economic position, many residents of the village seem less willing to maintain log houses built several decades ago. 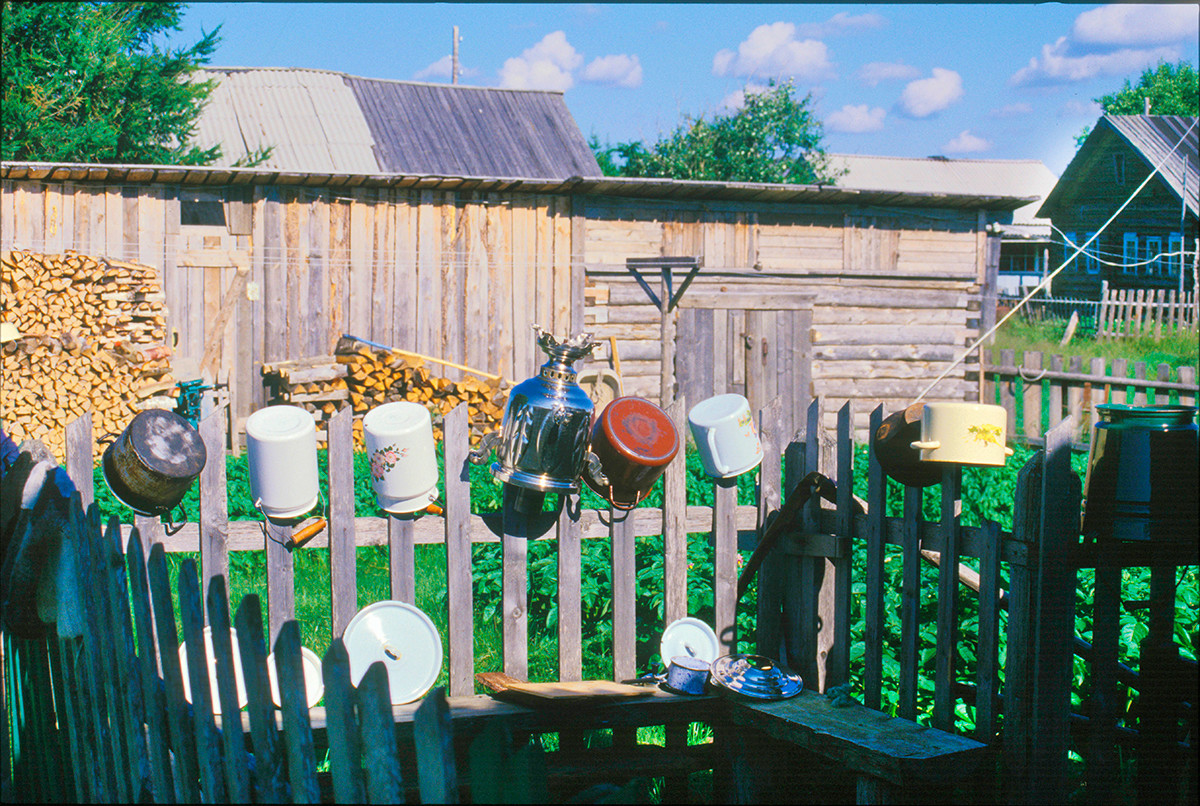 New houses–some of log construction and some of masonry–are increasingly replacing traditional dwellings. Several years ago, the village was connected to the regional power grid to ensure a dependable power supply necessary for the economy and for modern appliances. 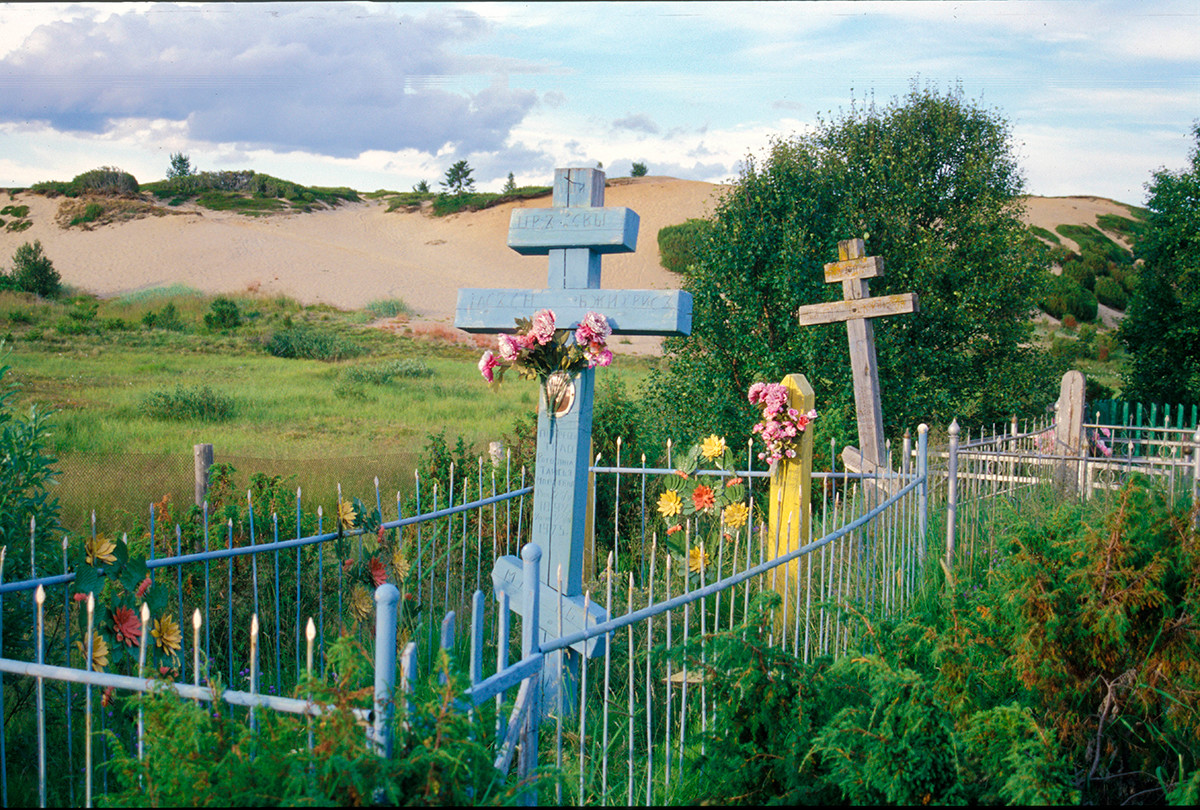 Varzuga is not a museum display, but an evolving environment that must address contemporary expectations on the part of the local population. At the same time there are concerns about preserving the traditional wooden architecture that is such an important part of the cultural legacy of the Russian North. Like other historic Russian settlements, Varzuga continues to search for the proper balance between heritage and development. 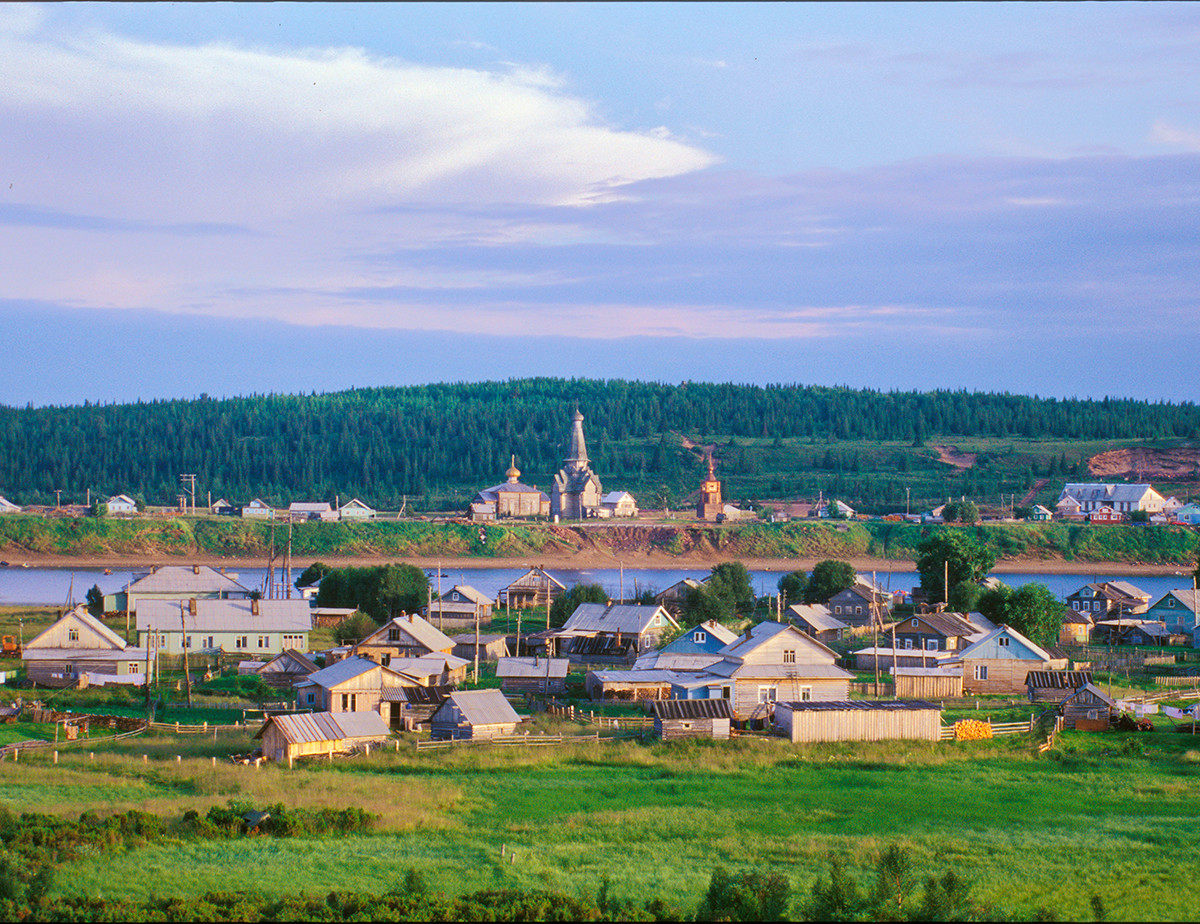