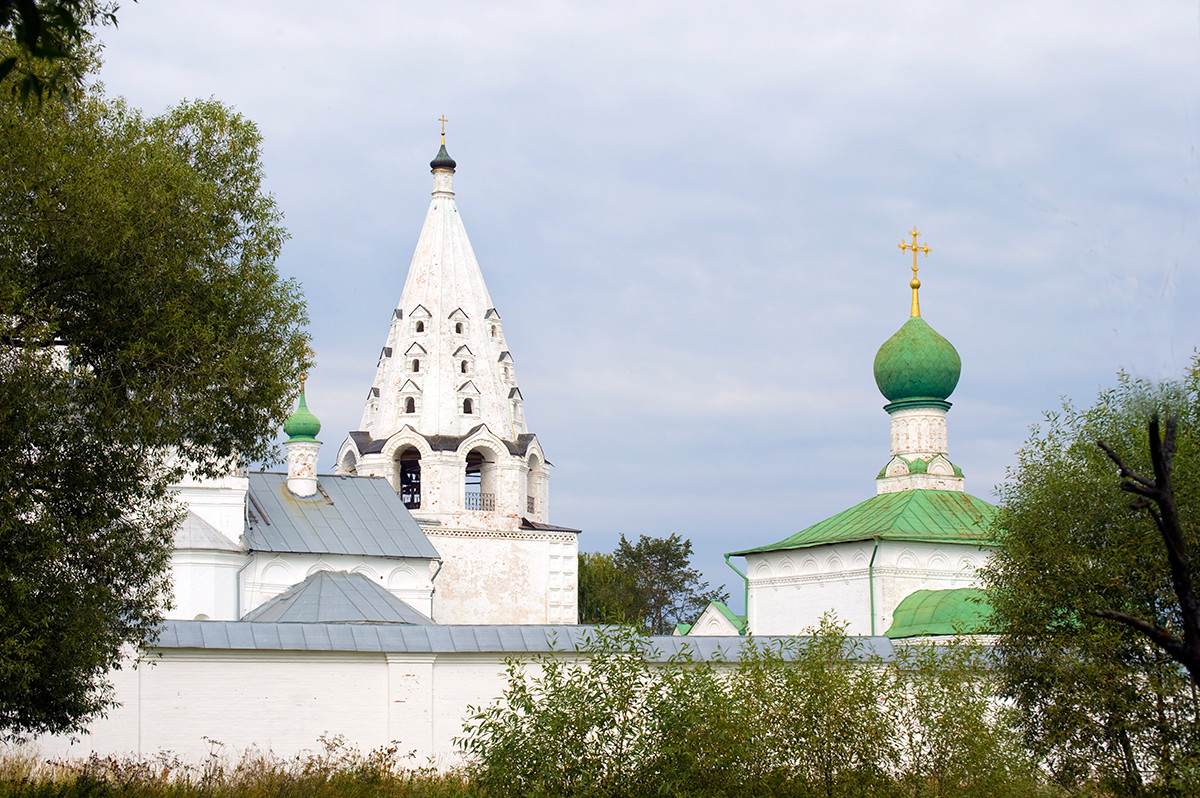 Although less well known today than the nearby towns of Vladimir, Suzdal or Novgorod, Pereslavl-Zalessky was one of the most significant centers of medieval Russian culture. Indeed, its Trinity-Danilov Monastery contains one of ​most impressive examples of ​medieval Russian fresco art, which is all the more remarkable for depicting apocalyptic scenes of destruction and damnation. In 1911, Russian chemist and photographer Sergey Prokudin-Gorsky visited the town and photographed its monasteries. My own work in Pereslavl-Zalessky has covered a period from 1980 to 2020. 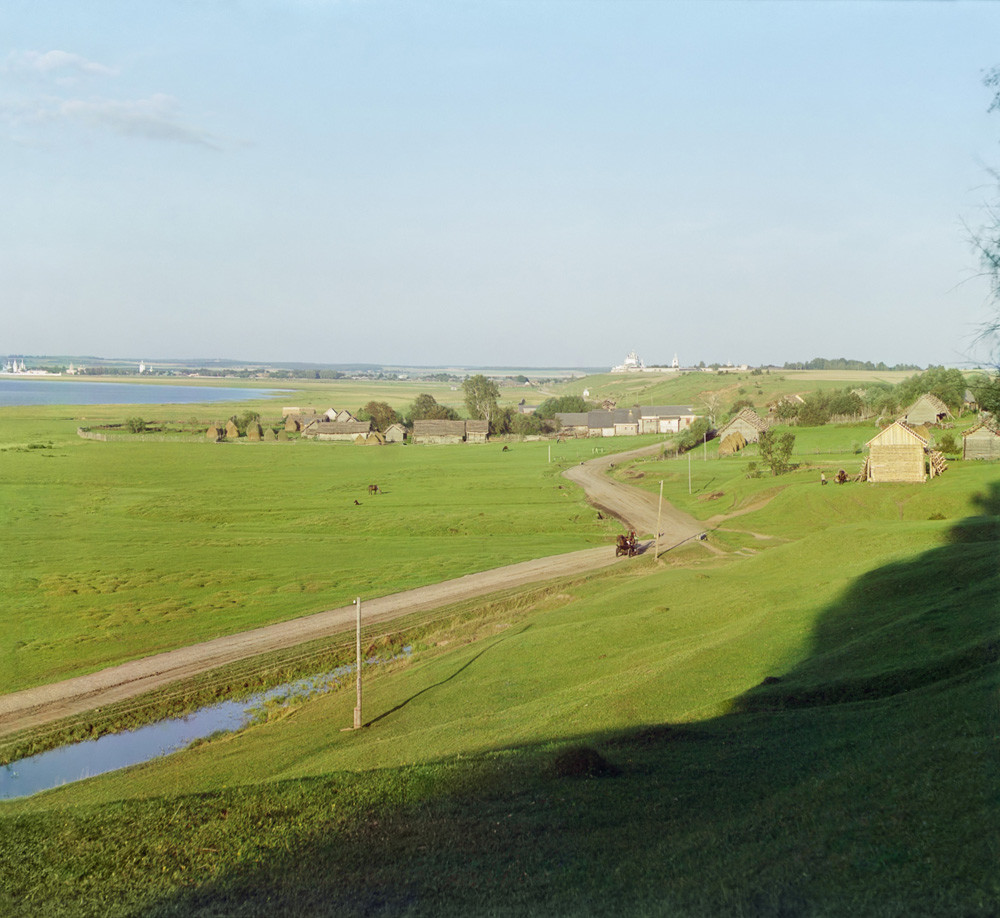 Founded in 1152 by Prince Yury Dolgoruky ("the long-armed"), Pereslavl-Zalessky was strategically located on major routes from the interior of medieval Rus to the Volga River and the White Sea. Its center was marked by the ancient limestone C​athedral of the Transfiguration and a fortified area with a high earthen rampart - both of which exist to this day.

The numerous monasteries of Pereslavl-Zalessky, located in town and overlooking nearby Lake Pleshcheyevo, were particularly important in the political and spiritual life of the Muscovite state. Among the oldest are the Monastery of St. Nicetas (Nikita), located on high ground to the north of Lake Pleshcheevo; and the Goritsky Monastery, overlooking the lake to the south. These and other monasteries appear in Prokudin-Gorsky’s photographs, including his panoramic views of the town. 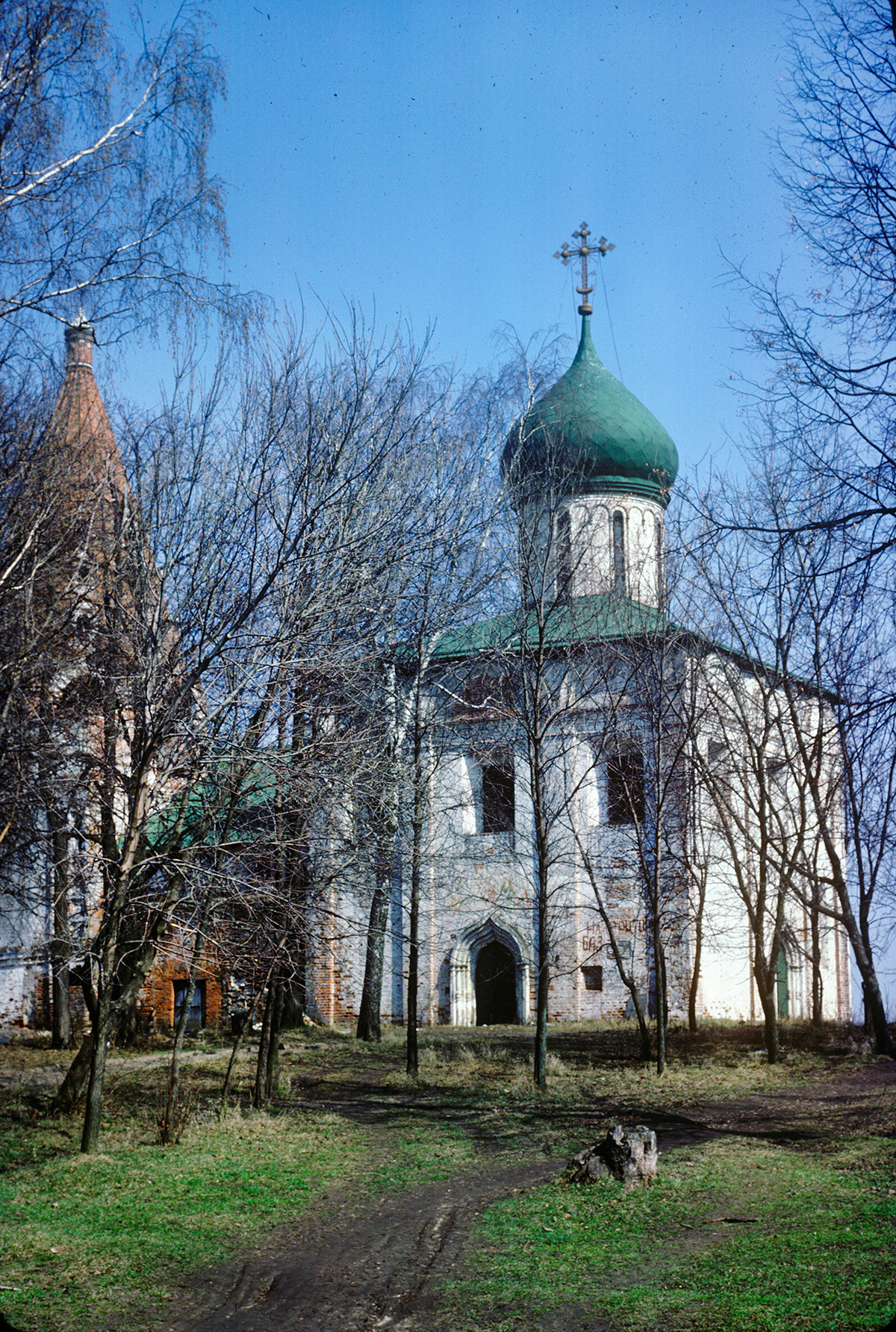 The answer to a tsar’s prayers

The Trinity Monastery is a relative newcomer. Its founder was a young monk named Daniil, born in Pereslavl-Zalessky in the late 15th century. Tonsured as a boy at the Borovsk-St. Pafnuty Monastery, Daniil returned to Pereslavl-Zalessky where he lived first at the Nicetas Monastery and then at Goritsky Monastery, where he became the hegumen, or abbot. Known for his charity to the poor and homeless, Daniil received permission to ​establish a new monastery on lower ground near the fortress. 1508 is the accepted year of the founding of the monastery, originally dedicated to All Saints. 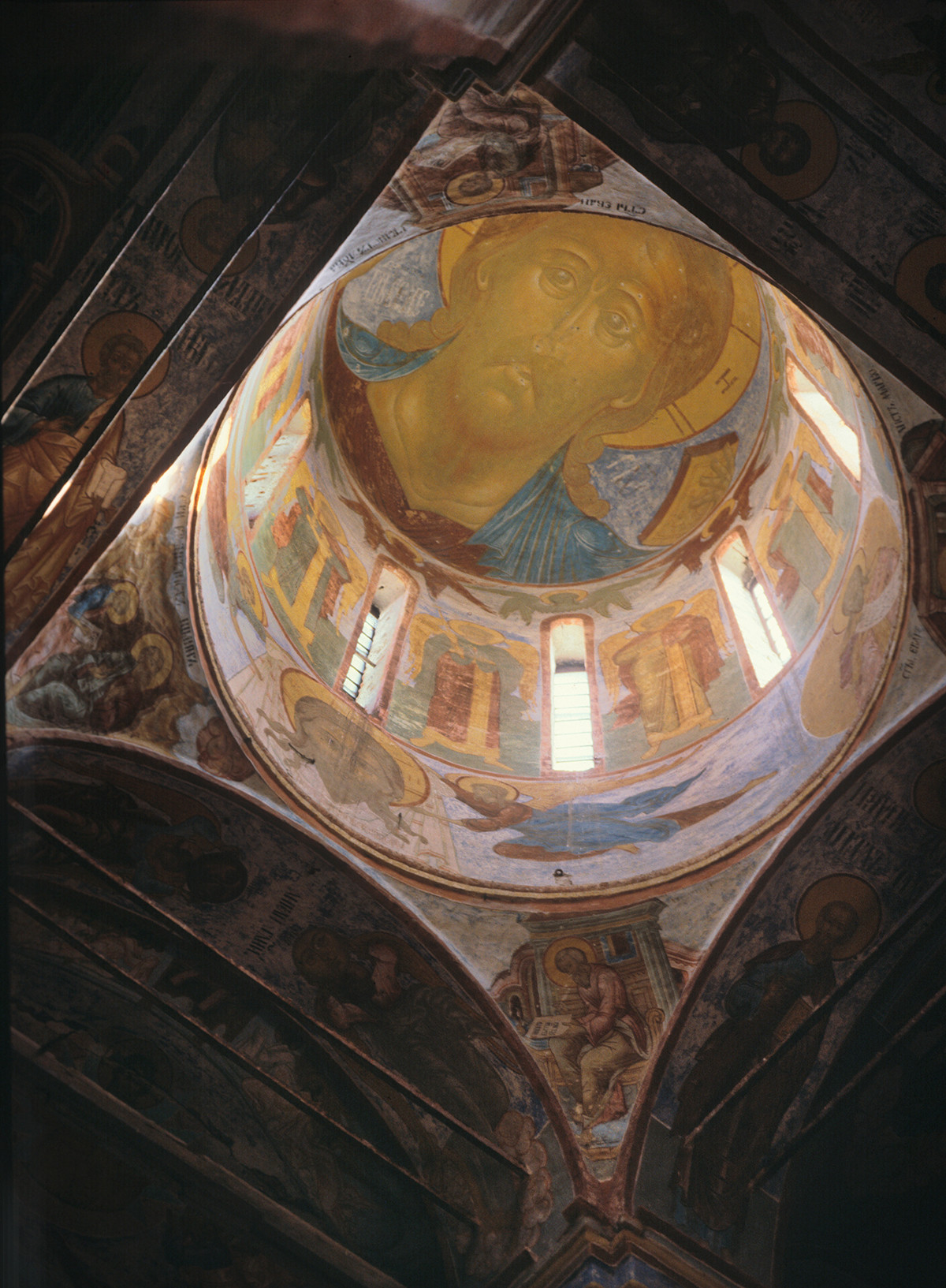 In recognition of his spiritual authority, Daniil was appointed advisor and confessor to the ruler of Muscovy, Grand Prince Basil III (1479-1533). By 1525, Basil faced a possible dynastic crisis due to the lack of a male heir. With the support of the church, Basil annulled his marriage to Solomoniya Saburova, who entered Suzdal's Intercession Convent, and married Elena Glinskaya. Initially, this second marriage did not produce the desired issue, so in supplication for the birth of a son, the royal couple undertook pilgrimages to monasteries. The Trinity Monastery, under the spiritual guidance of Daniil, was particularly revered by Basil. With the birth in August 1530 of his son Ivan IV (subsequently known as Ivan the Terrible), Basil gratefully supported the construction of the monastery's main church, the Cathedral of the Trinity. 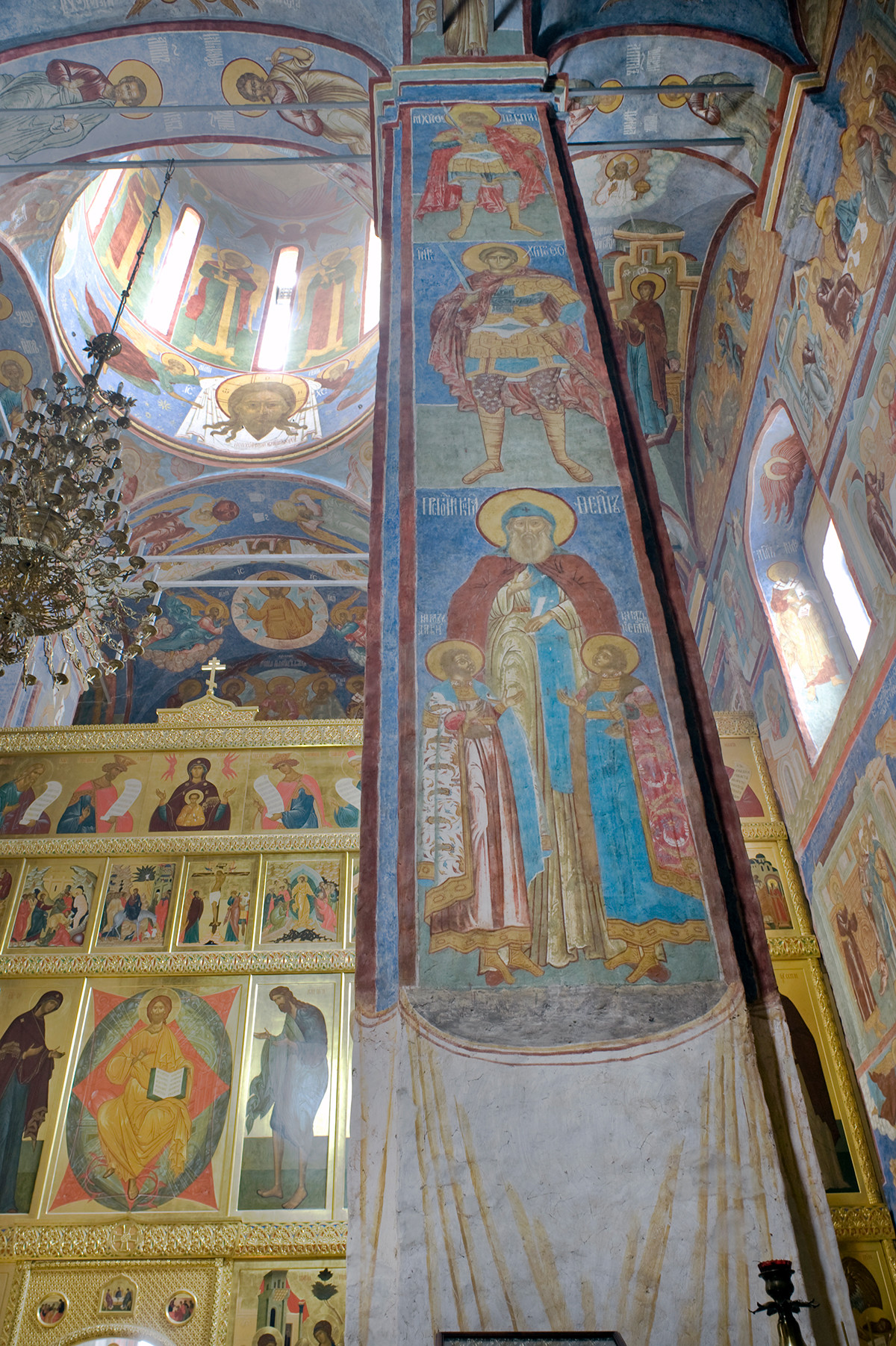 Built of brick between 1530 and 1532, the Trinity Cathedral is a notable example of early 16th-century church design, with a square plan and a symmetrical division into three bays. Despite the modification of its roofline, which originally followed the curves of the semicircular gables (zakomary), the basic structure of the Trinity Cathedral remains intact to this day.

The Trinity Cathedral is crowned by a single cupola on a high cylinder, or drum.​ As the monastery's primary masonry structure during the 16th century, the white-walled ​cathedral served as a landmark among the surrounding dark log structures. 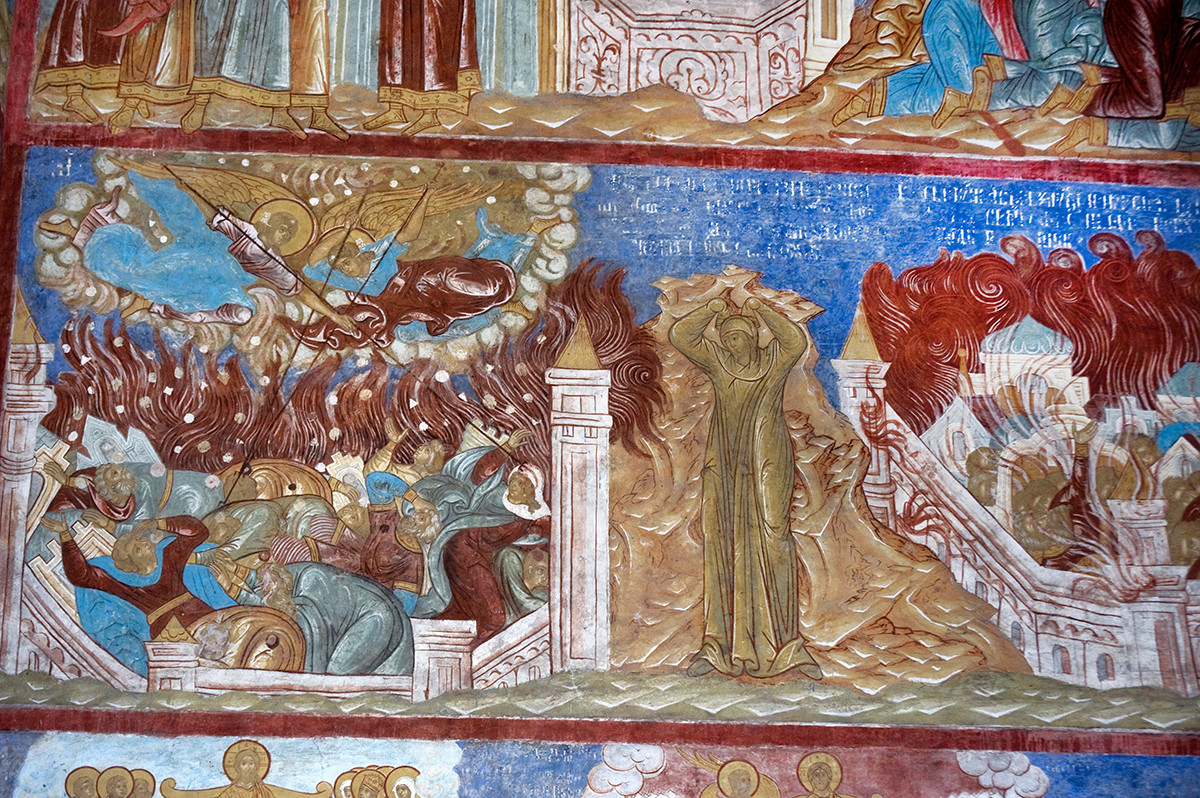 ​Despite its status at the Muscovite court, the monastery shared in the chaos that afflicted central Russia during the latter part of Ivan the Terrible's reign. The situation worsened after the death of Tsar Boris Godunov in 1605. Without a clear successor to the throne, Russia was wracked by competing armies and massive social disorder during what came to be known as the Time of Troubles.

Pereslavl-Zalessky supported successive competing factions – none of them successful. Much of the population was killed or died of disease and hunger. In 1608 the town was occupied by Polish-Lithuanian forces who sacked the monasteries, including Holy Trinity. 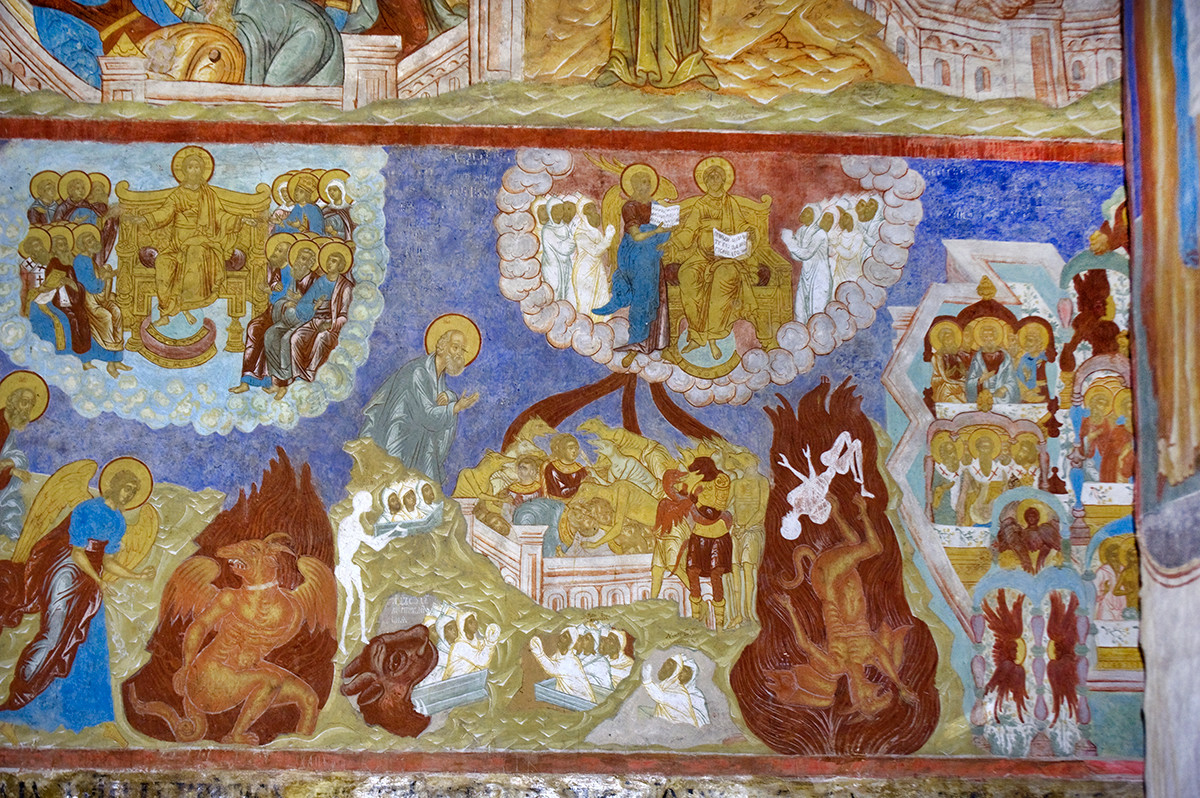 North wall, west bay, 1st row. Frescoes from Book of Revelation 20. From left: Angel with the Key Locks Satan for a 1000 years; the Peoples of Gog & Magog encompass the Camp of the Saints; Death & Hell cast into the Lake of Fire and Brimstone; the Resurrection of the Dead; Heavenly Jerusalem.

A cathedral fit for a saint

Gradually recovering after the long devastation, Pereslavl-Zalessky and its monasteries benefited from their location on a major route to the north. During the ​long ​reign of Tsar Alexei Mikhailovich (r. 1645-76), the Trinity Monastery returned to court prominence with the support of the energetic church prelate Jonah Sysoevich (ca. 1607-90).

As metropolitan of the wealthy diocese based in the neighboring town of Rostov, Jonah took an active interest in establishing the cult of Daniil at the Trinity Monastery. In 1653, he supervised the discovery of Daniil's relics on the monastery grounds. This proved to be the first step toward Daniil’s rapid canonization in 1653-54 with the approval of Patriarch Nikon in Moscow.​ I​n 1660, Jonah built a chapel dedicated to Daniil a​t the north wall of the Trinity Cathedral. 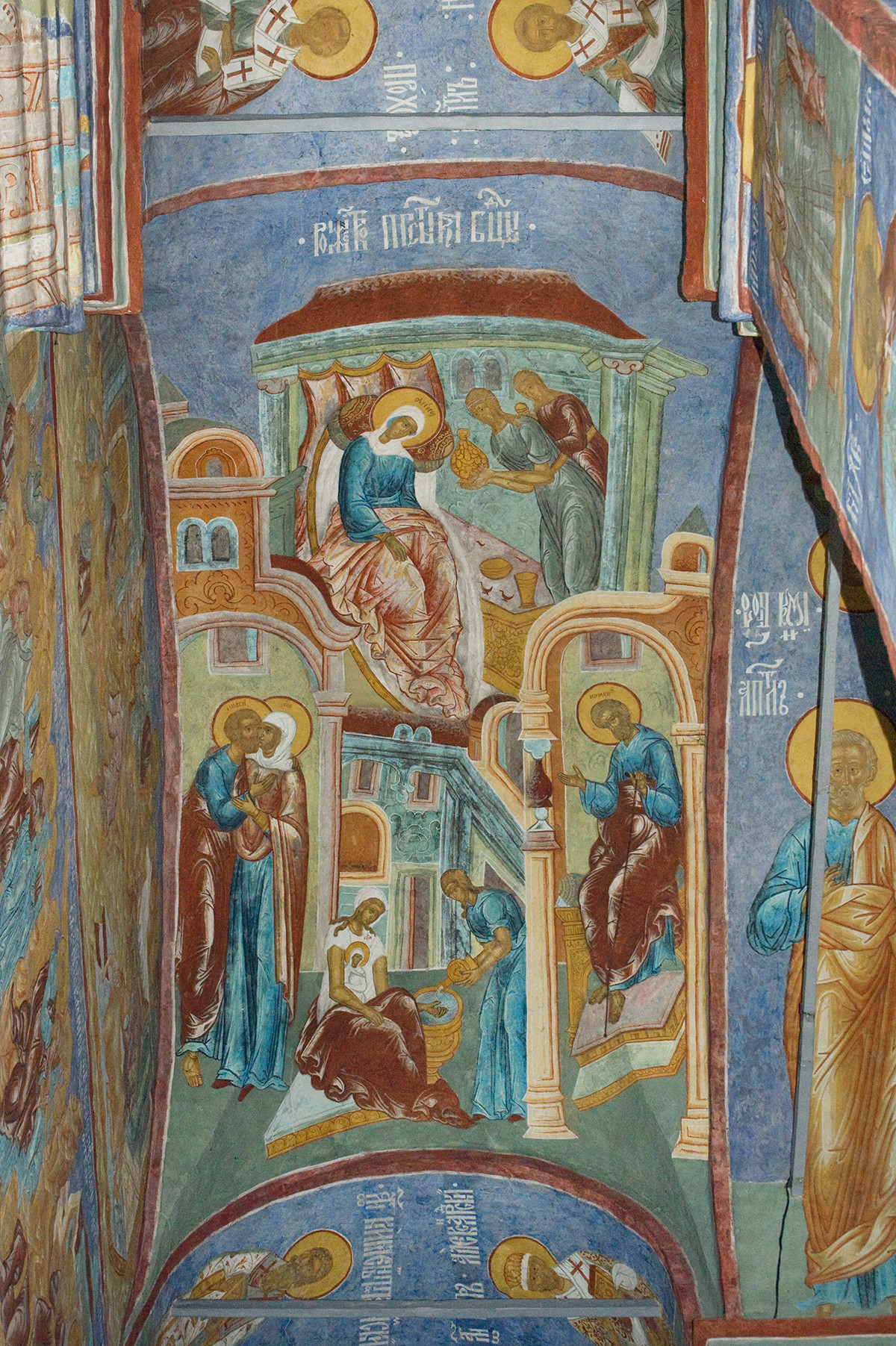 The canonization of Daniil led to a vibrant period in the monastery's history. Large donations from wealthy patrons as well as the Muscovite court enabled the monastery cellarer (manager) to embark on the long-delayed painting of the interior cathedral walls.

Fortuitously, the project occurred at a time of extraordinary creativity among groups of painters in Yaroslavl and Kostroma These painters were active not only in their own towns, but also in Rostov and Moscow. Thanks to his high regard for the Trinity Monastery, Jonah agreed to send one of the most accomplished groups of Kostroma painters to work there, including the masters Gurii Nikitin and Sila Savin. Although occupied with complex projects in Moscow (notably, the repainting of the frescoes at the Archangel Michael Cathedral in the Kremlin), the Kostroma painters arrived at Trinity Monastery in 1662. 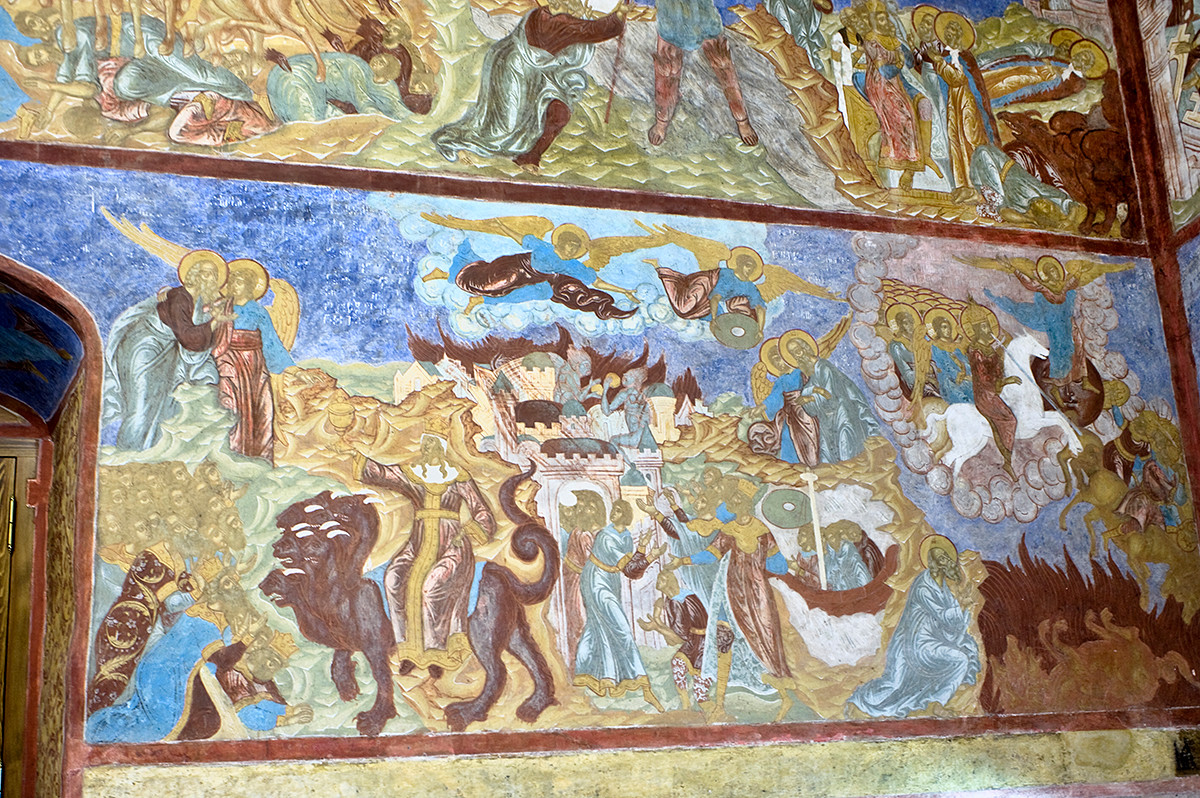 West wall. Frescoes from Revelation, 16-19. From left: the Angel shows St. John the overflowing of God's Cup of Wrath; Vision of Babylon & the Beast; God's People leave the destruction of Babylon; the Righteous Judge on a White Horse slays with a sword the Unclean Peoples. August 14, 2019

Remarkably, the painters completed the major subjects by the fall of that year. But due to the demand for their work, they were pulled from the cathedral and did not return in 1682, after many entreaties from the abbot.

To this day, the frescoes retain their visual impact. In part this can be explained by the piety of their traditional, archaic style of expression with bright color contrasts. Equally compelling is their emphasis on apocalyptic conflict and destruction. 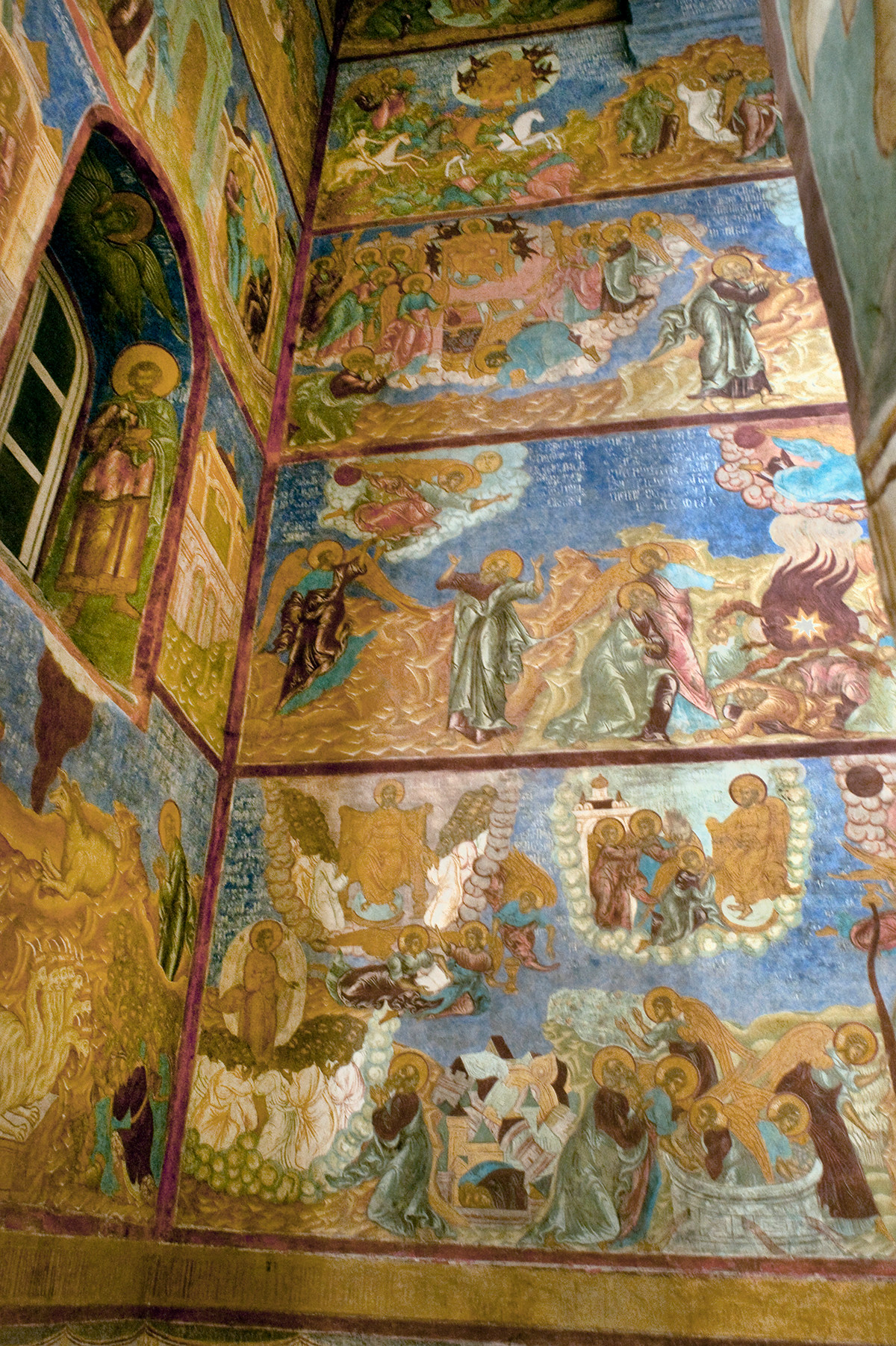 Top row: 4 Horsemen of the Apocalypse; 3rd row: Opening of the 7th Seal, the Angel with the Golden Censer at the Altar; 2nd row: the 4th Angel trumpets, the Darkening of the Heavens&the Opening of the Shaft of the Abyss; 1st row: the Fall of Babylon&appearance of the Angel to the 144,000 Righteous.

Why the Apocalypse? Russian churches often depict the Last Judgment on the west wall, yet a detail representation of the Apocalypse (from the vision of St. John on Patmos) is rare. Perhaps memories of the Time of Troubles played a role in the choice of subject. But the Russian Orthodox Church had also entered a time of great turbulence in the 1650s, when ​Patriarch ​Nikon promulgated liturgical reforms that shocked traditional believers. Although Nikon lost favor with Tsar Alexei and was deposed in 1666, the state insisted that his reforms be implemented. The result was a schism in the Church and the rise of dissenting groups generally known as Old Believers. Impassioned disputes and persecution swept the church. 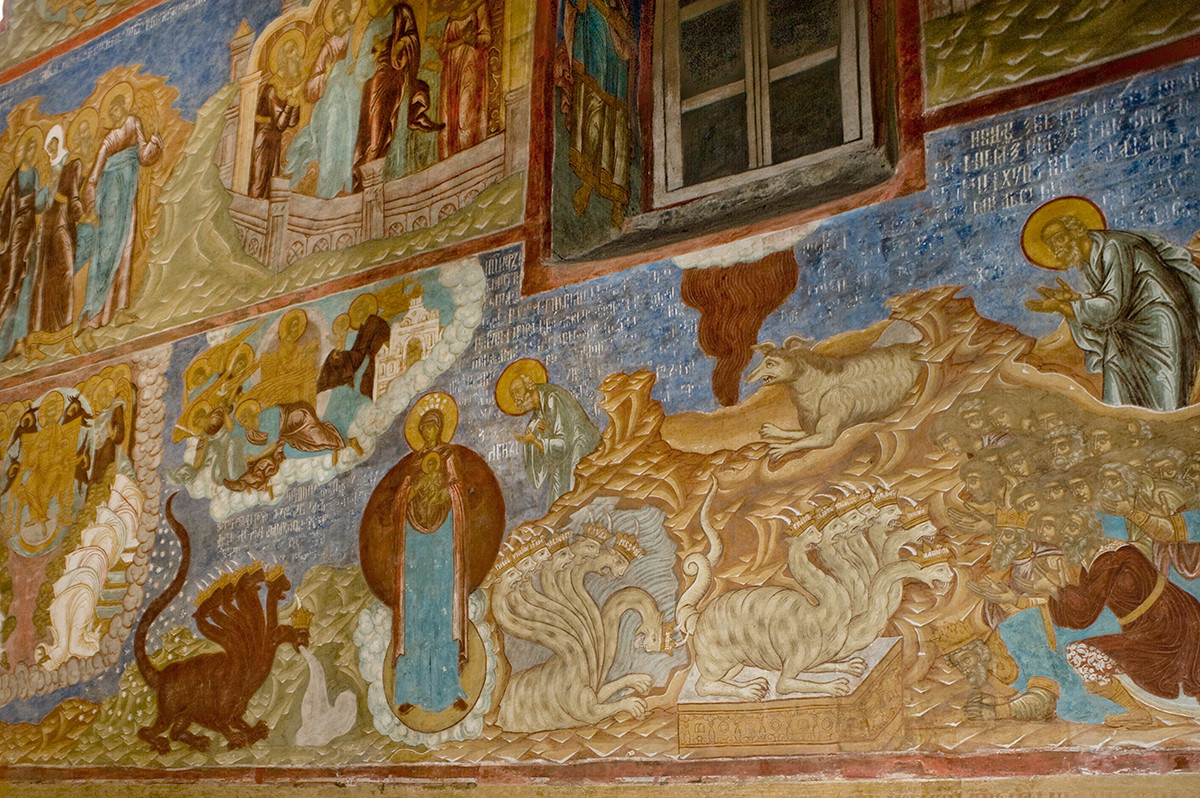 Whatever the connection with external events, the Kostroma painters conveyed cataclysmic images both from the Book of Genesis and the Book of Revelation (the last book of the Christian Bible) – the alpha and omega. On the west wall, ​for example, ​Lot and his family are depicted fleeing danger before the destruction of Sodom and Gomorrah. The south wall is especially vivid in its portrayals of ​phantasmagoric beasts with direct references to passages from Revelation. Christ and the Virgin Mary are depicted standing in opposition to the forces of the Antichrist. 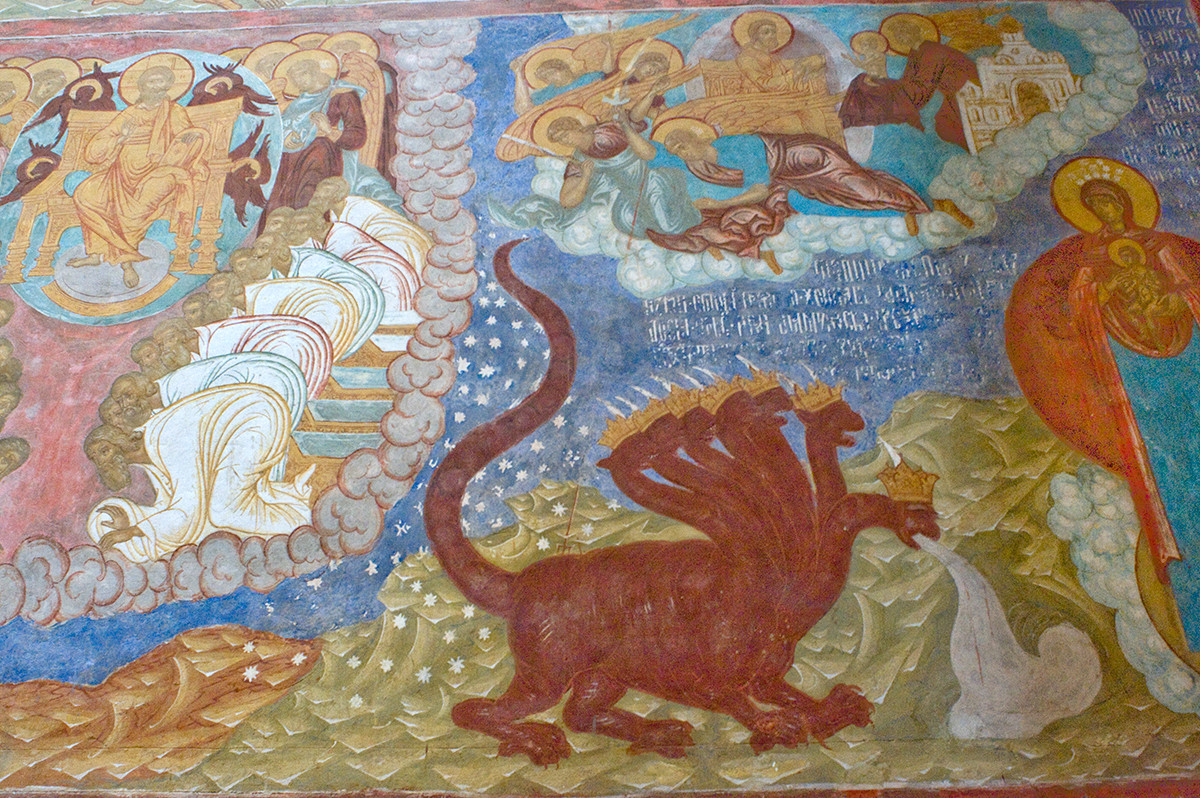 South wall, 1st row. Frescoes from Revelation, 12. From left: Christ & the Righteous arrayed in White; the Red Dragon with Seven Crowns & Ten Horns; Vision of the Woman clothed with the Sun. August 21, 2013.

Soaring above all in the dome is a majestic image of Christ Ruler of All (Pantocrator). Considered one of the great accomplishments of medieval Russian art, this fresco is a sublime culmination to the agitated display on the cathedral walls.

Completion of an ensemble 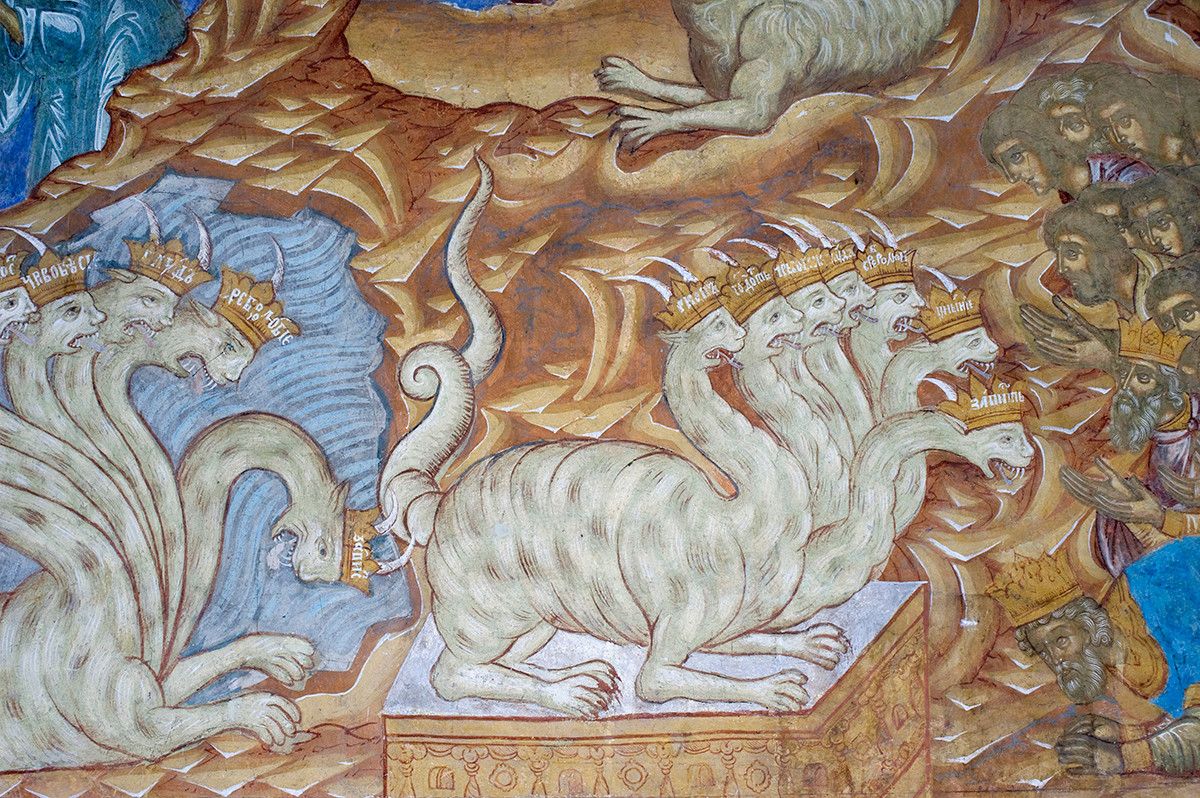 The Trinity Monastery continued to flourish during the latter part of the 17th century. Its cathedral was enhanced by the construction of a large "tent" bell tower in 1689. Other additions of that period include the Church of All Saints, a modest structure built just to the north of the cathedral in the 1680s. Of special note is the Church of the Praise of the Virgin (!695), which had a large refectory (dining hall) attached.

Most of this construction was supported by Prince Ivan Petrovich Baryatinsky (1615-1701), who gained the trust of Tsar Alexei and spent his life in the tsar’s service. At an advanced age (in his early 80s), he retired to the monastery and in 1697 took the monastic name Yefrem. 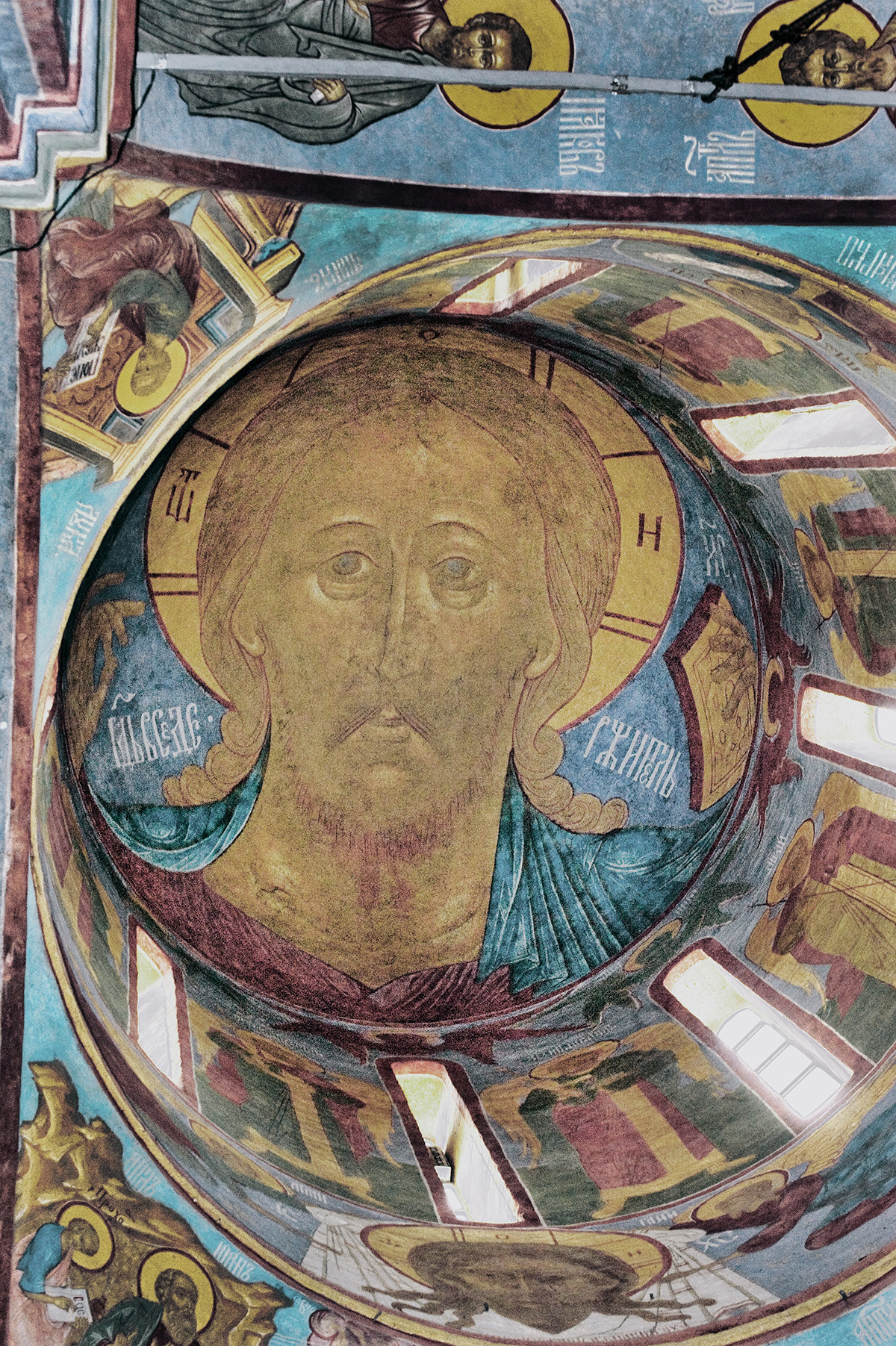 Shortly before his death, he enabled the building of the west gate church, dedicated to the Tikhvin Icon of the Virgin (1700). This completed the monastery’s main ensemble of shrines.

During the Soviet period the Trinity-Danilov Monastery was closed (in 1923) and vandalized, with the cathedral icons either lost or destroyed. A limited attempt to clean the frescoes in 1982 faltered for lack of funding. In 1995, the monastery was finally returned to the church, and the painstaking work of ​ restoration continued. Surviving through decades of neglect, the magnificent frescoes in the Trinity Cathedral are now once again seen in their astonishing brilliance. 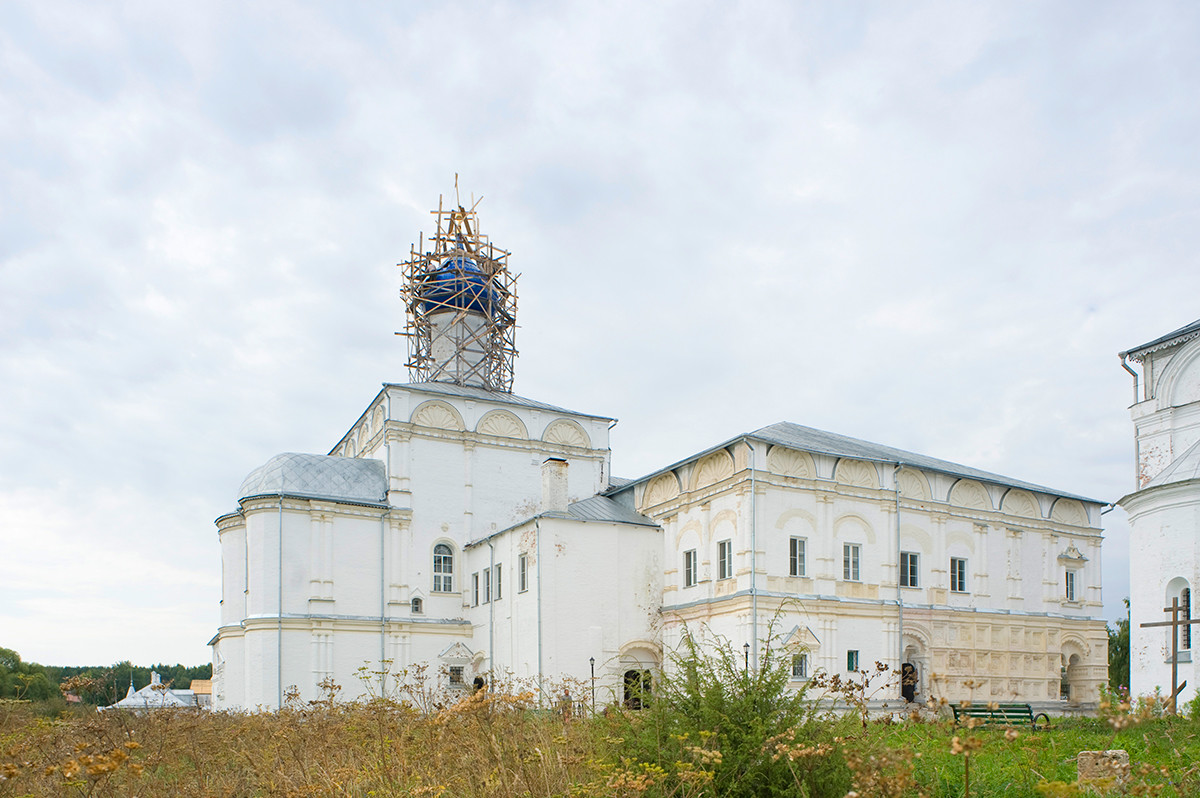 Trinity-Danilov Monastery. Refectory Church of the Praise of the Virgin. August 21, 2013.