A visit to the heart of Kostroma 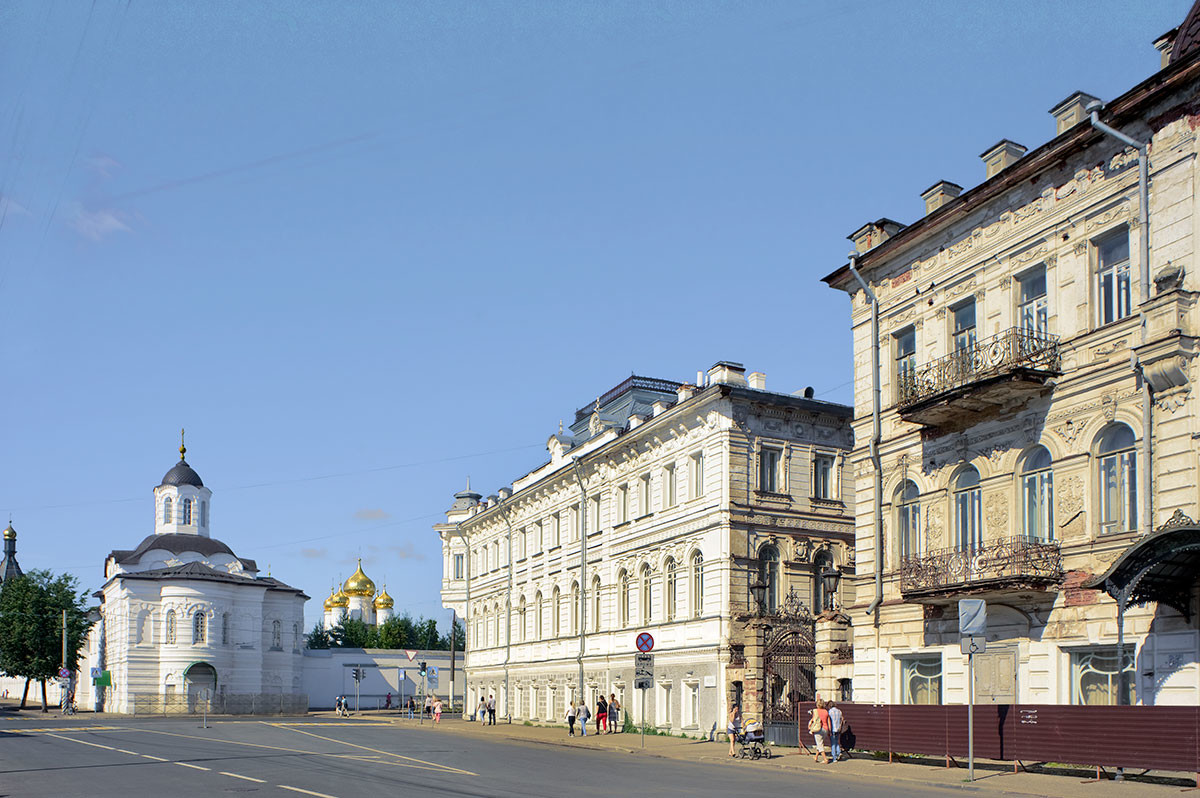 Of the many historic towns along the Volga, Kostroma (current population 277,000) rivals its neighbor Yaroslavl for the beauty of its churches and for the important role it has played in Russian history. Russian photographer and chemist Sergei Prokudin-Gorsky (see box text below) made two trips to Kostroma and its Ipatiev Monastery in 1910 and 1911. Most of the original three-separation glass negatives for his Kostroma photographs have not survived in the Library of Congress collection, but contact prints from his albums provide priceless information. My photographic work in Kostroma dates from 1988 to 2017. 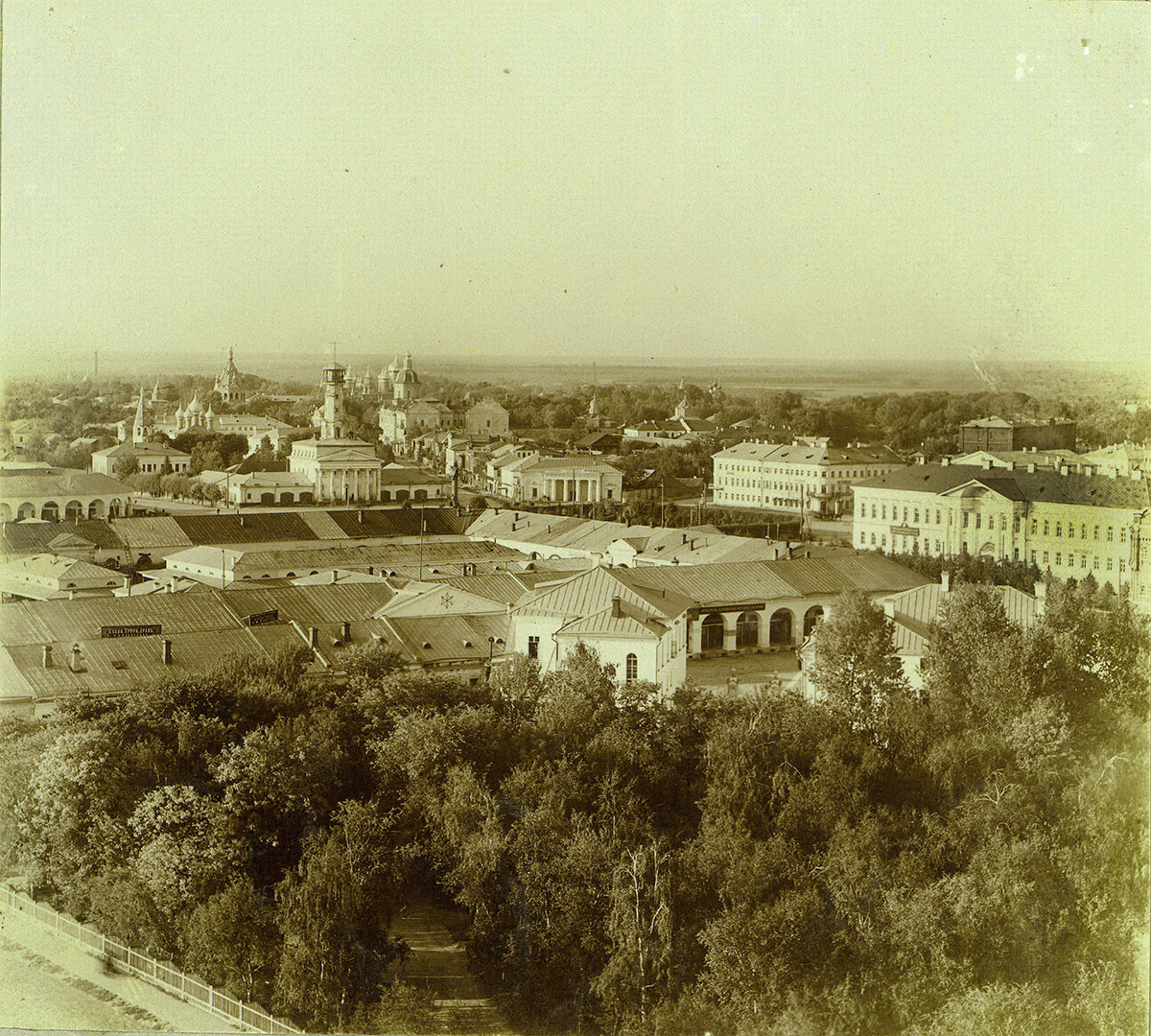 Although historical evidence is sparse, it is commonly thought that Kostroma was founded in the early 1150s by Yury Dolgoruky, ruler of the dominant Vladimir principality and known as the founder of Moscow (1147). The earliest documented reference to Kostroma dates to 1213, when the settlement — built entirely of wood — was burned by Prince Konstantin during a territorial feud with his brother Yury.

Kostroma was presumably sacked in 1238 during the Mongol invasion of central Russia. In the second half of the 13th century, the Kostroma principality became an important political center, but by 1364, it had been absorbed into the expanding Muscovite state. 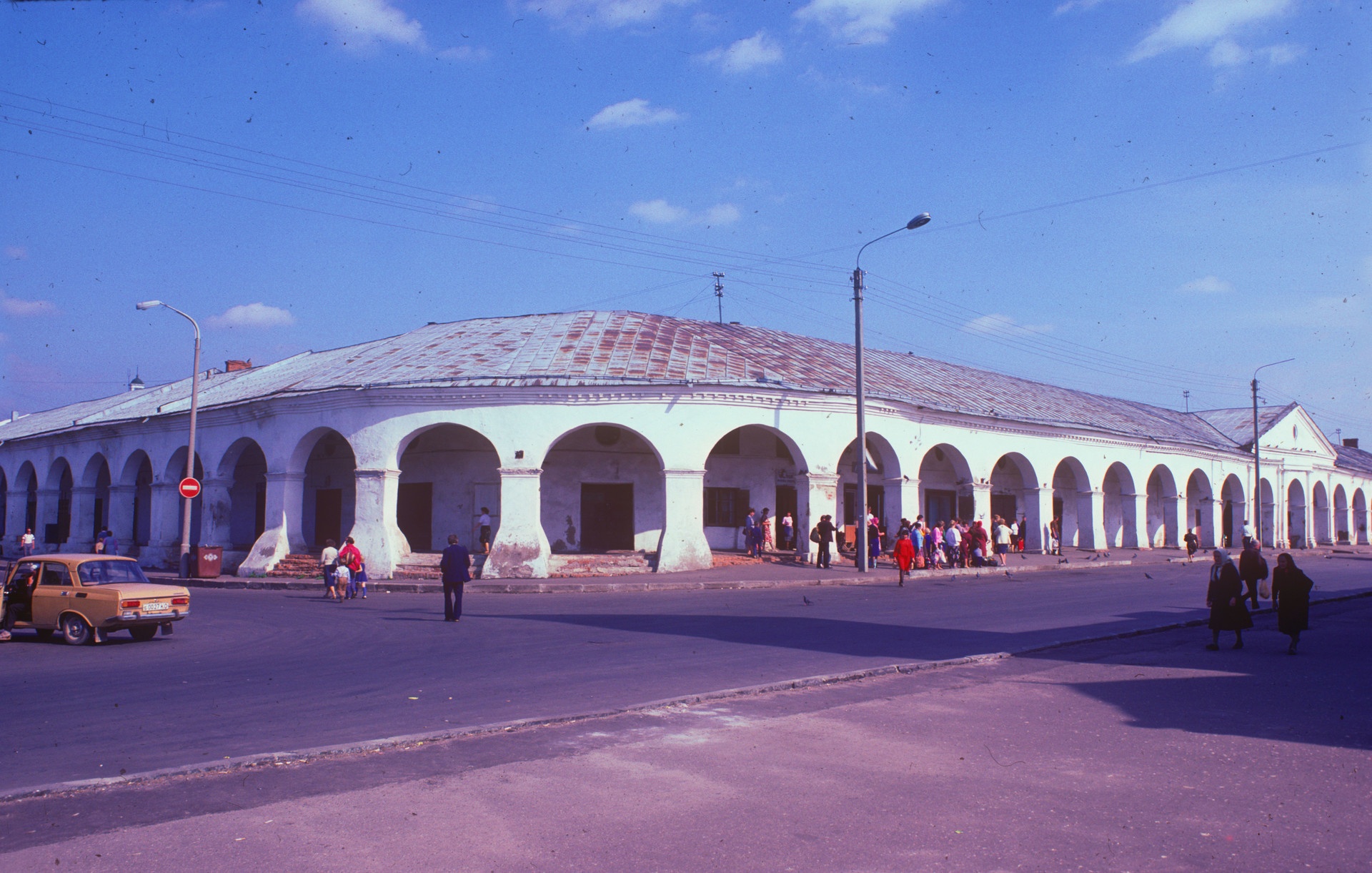 The Kostroma area was known for its monastic institutions, such as the Trinity-Ipatiev Monastery, founded no later than the early 14th century and one of the most important in Russia. 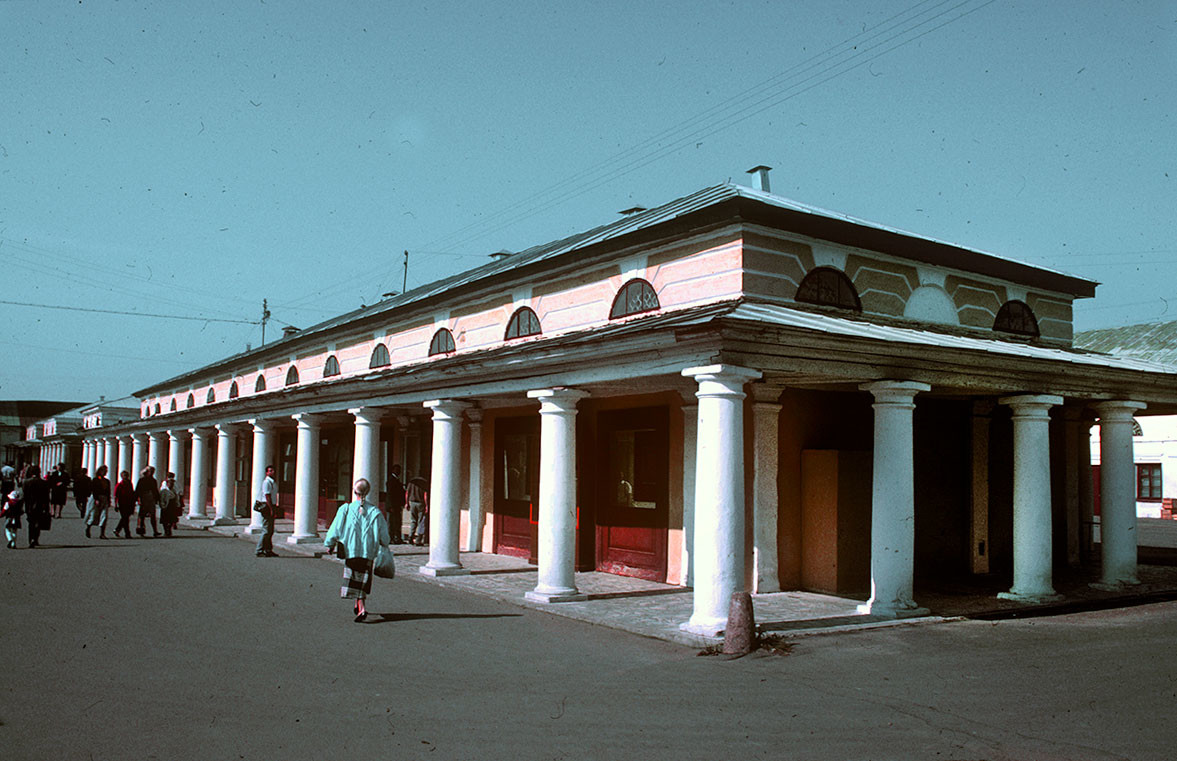 In the 16th century, Kostroma’s monasteries and churches were patronized by Ivan the Terrible, but they also suffered during a period of social and political turbulence that wracked the country during the latter part of Ivan’s reign. This period culminated in the early 17th-century during a dynastic crisis known as the Time of Troubles.

Amid a collapse of state authority and widespread civil strife, Kostroma was sacked in 1608 by Aleksander Lisowski, a feared Polish-Lithuanian cavalry leader who raided many Russian towns from 1608 to 1615. Yet the town and the Ipatiev Monastery also played a major role in the process of recovery. It was here that the young Mikhail Romanov and his mother found refuge during critically dangerous months at the end of 1612 and into 1613. 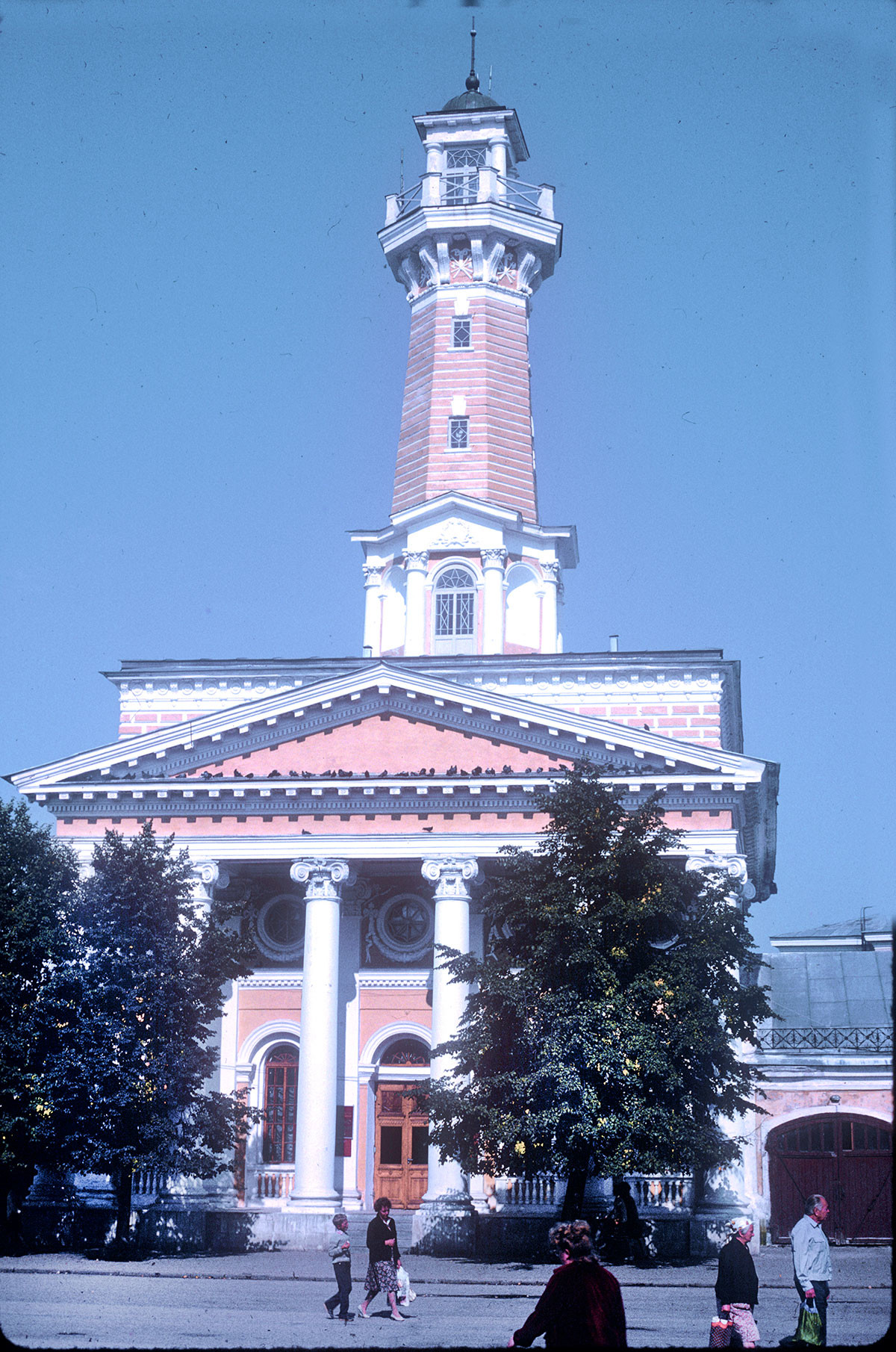 With the national assembly’s election of Mikhail as tsar in March 1613, order gradually returned to the ravaged lands of central Russia. The Romanov family’s ancient connections to the Kostroma region benefited the town’s recovery, as did its advantageous location on the Volga. During the latter part of the 17th century, Kostroma was not only a commercial and industrial power but also an artistic center, widely known for its icon and fresco painters. 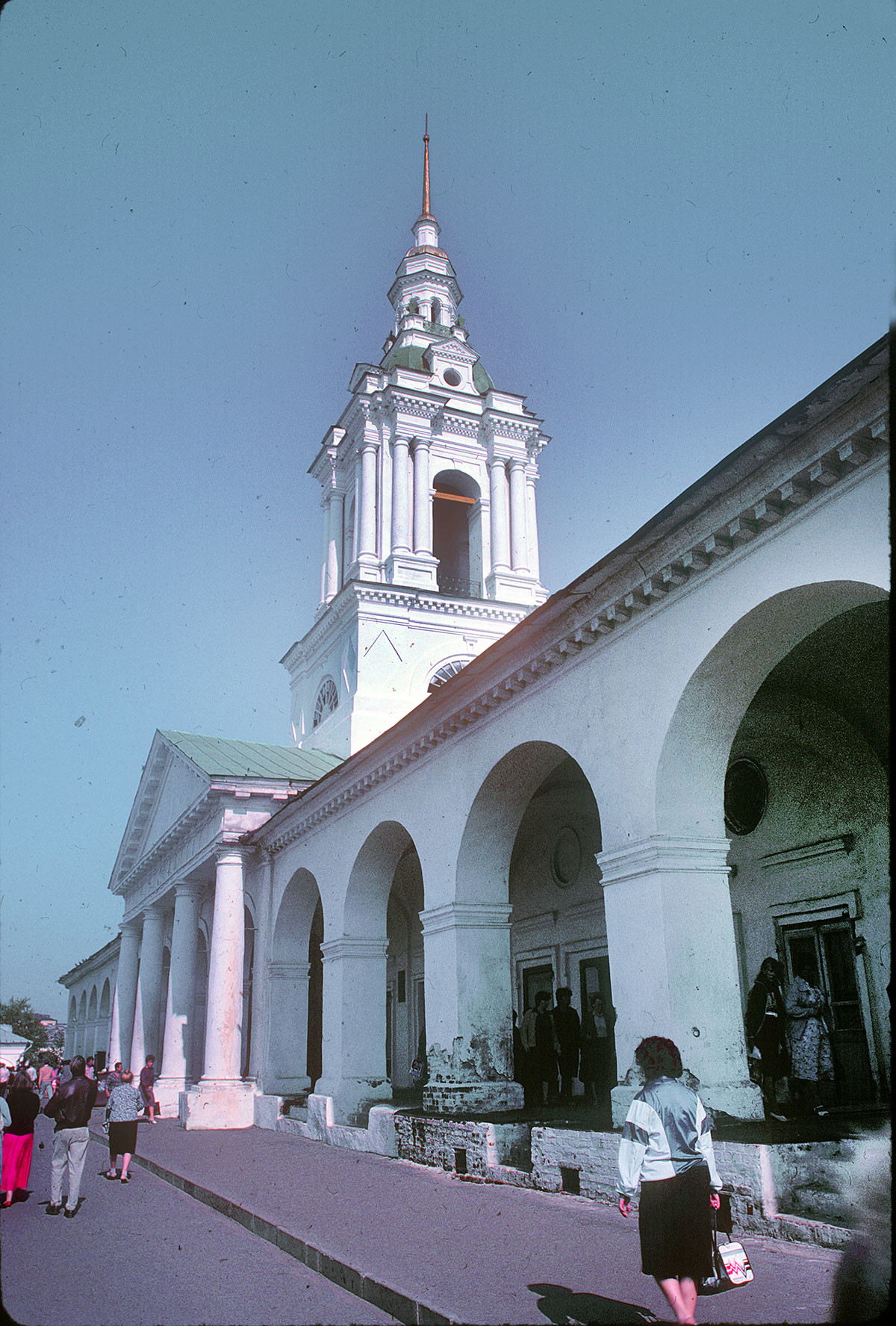 Red Trading Rows with Church of the Icon of the Most Merciful Savior in the Trading Rows. August 22, 1988

Prosperity continued during the 18th century with the expansion of a large trading center and the establishment in 1751 of a linen factory that propelled Kostroma to a position as the largest linen producer in Russia. The town’s standing was affirmed by a state visit by Empress Catherine II (the Great) in 1767.

In 1773, however, catastrophe struck in the form of a fire that destroyed much of town, which still was built primarily of wood. Within a decade, reconstruction was well underway, aided by Catherine’s policy of promulgating rational plans for Russia’s provincial centers. 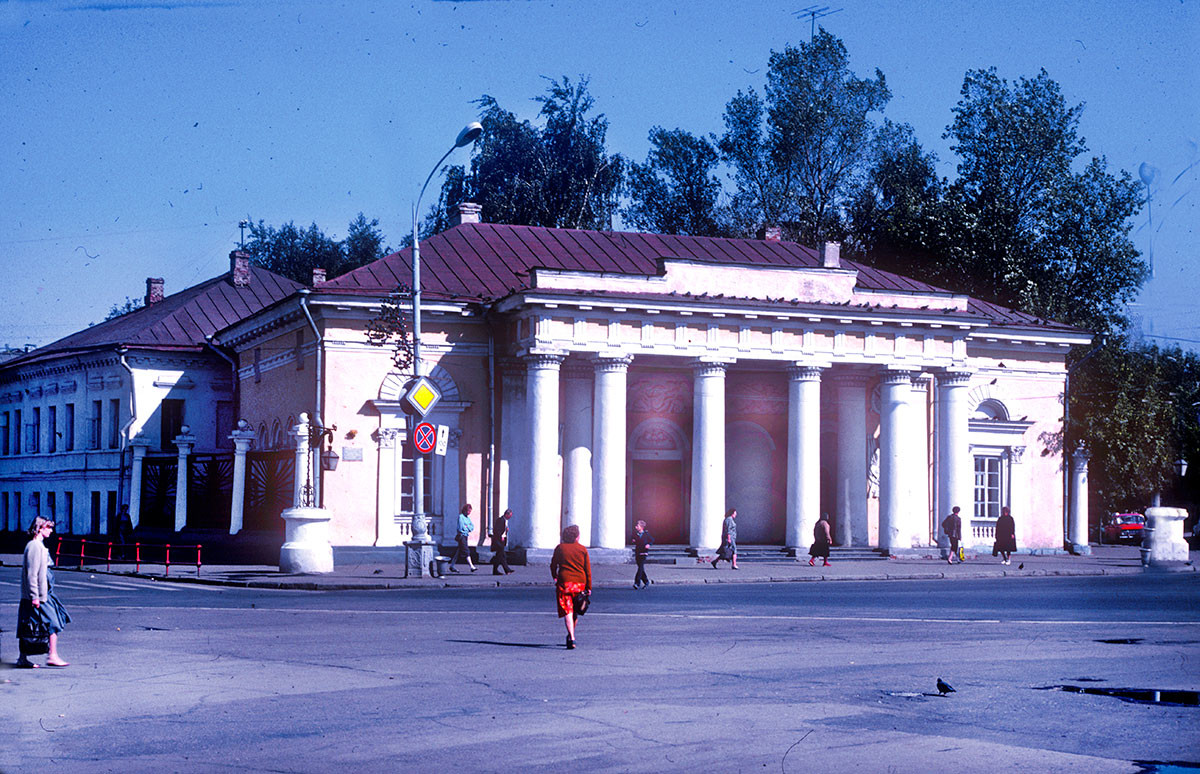 The centerpiece of the new Kostroma city plan was the masterful design of Ekaterinoslav (“glory to Catherine”) Square in 1781-84. The square became the organizing point for a radiating network of streets and a complex of trading rows (shopping galleries) built of brick instead of highly flammable wood and canvas. 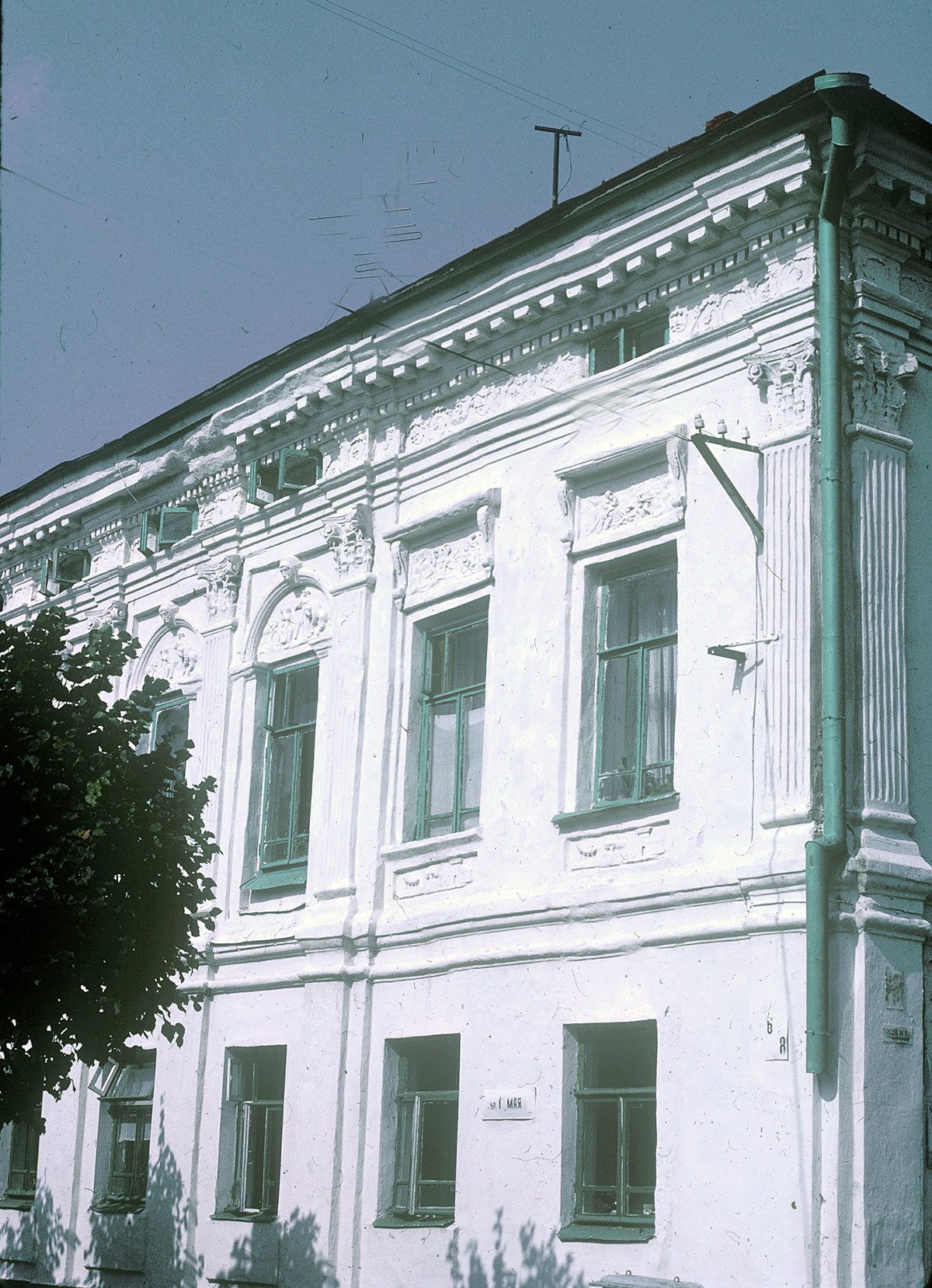 Because of its deep connections with the origins of the Romanov dynasty, Kostroma was the frequent object of royal visits and patronage. In 1797, Kostroma was visited by Emperor Paul, who elevated the town to the status of provincial capital.

After the 1773 fire, the town’s early 16th-century Dormition Cathedral (located within the ancient fortress, or kremlin, and expanded in the 17th century) was rebuilt in a baroque style. Shortly thereafter, work began on the adjacent Epiphany Cathedral and its enormous five-tiered bell tower (1776-91). 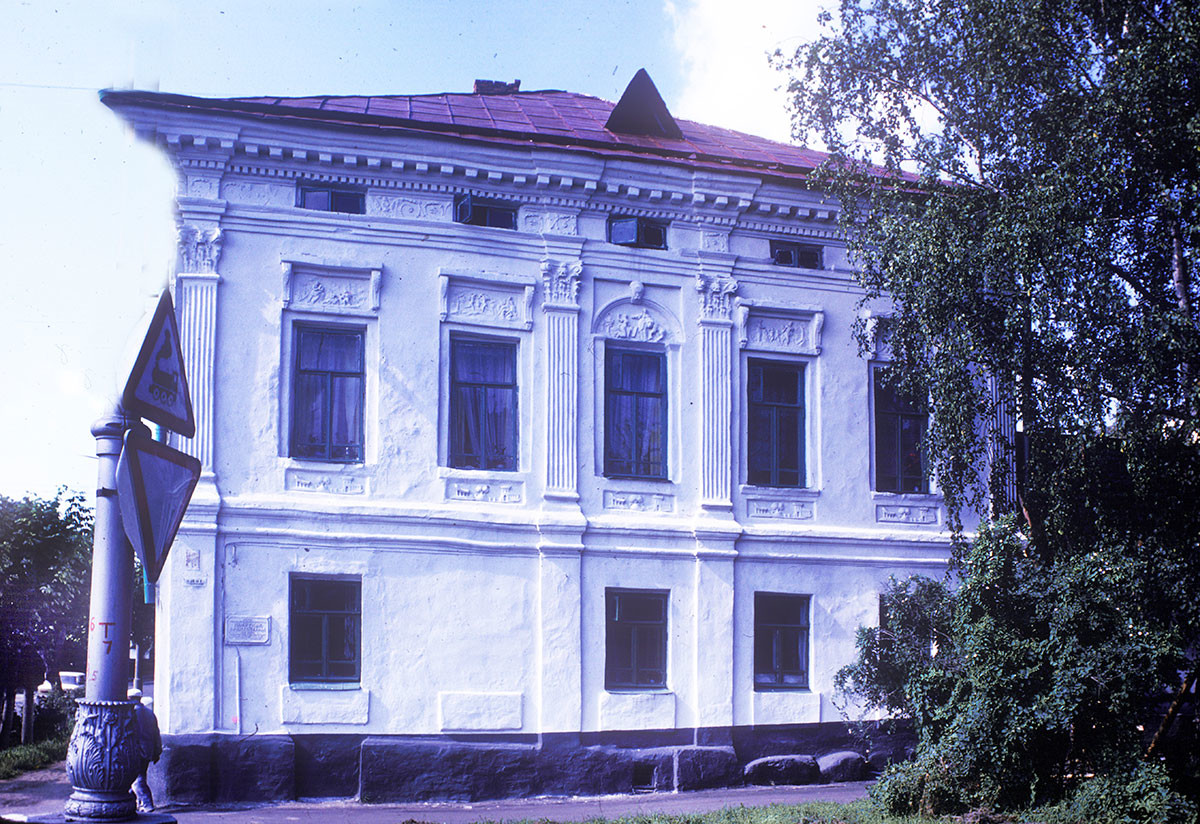 Prokudin-Gorsky photographed the cathedral ensemble in 1910, and although the original glass negative has not been preserved, his contact print provides essential historical detail, especially valuable since the entire ensemble was demolished in 1934. (The Epiphany Cathedral and bell tower are now being rebuilt in their original form.) 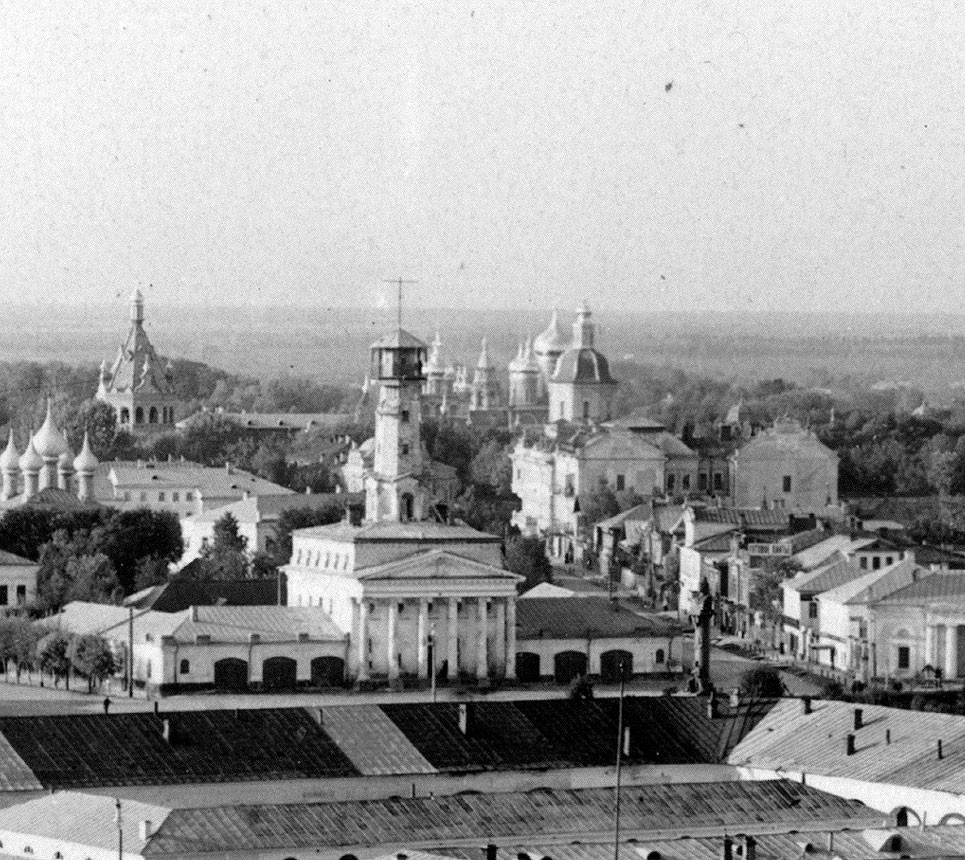 The dominant architectural landmark of Ekaterinoslav Square is the neoclassical fire tower, commissioned in by Karl-Wilhelm Baumgarten, governor of Kostroma Province. Now a national landmark, the fire tower was built in 1824-25 to a design by Peter Fursov, the province’s official architect. Superbly engineered, the tower is notable for the rustication of its stuccoed brick façade.

The fire tower was flanked by guard stations (given the German name “Hauptwacht”), a hotel, stores and administrative offices. The square extended toward the Volga River as a large rectangular space flanked by two major trading courts known as “rows” (arcaded galleries). 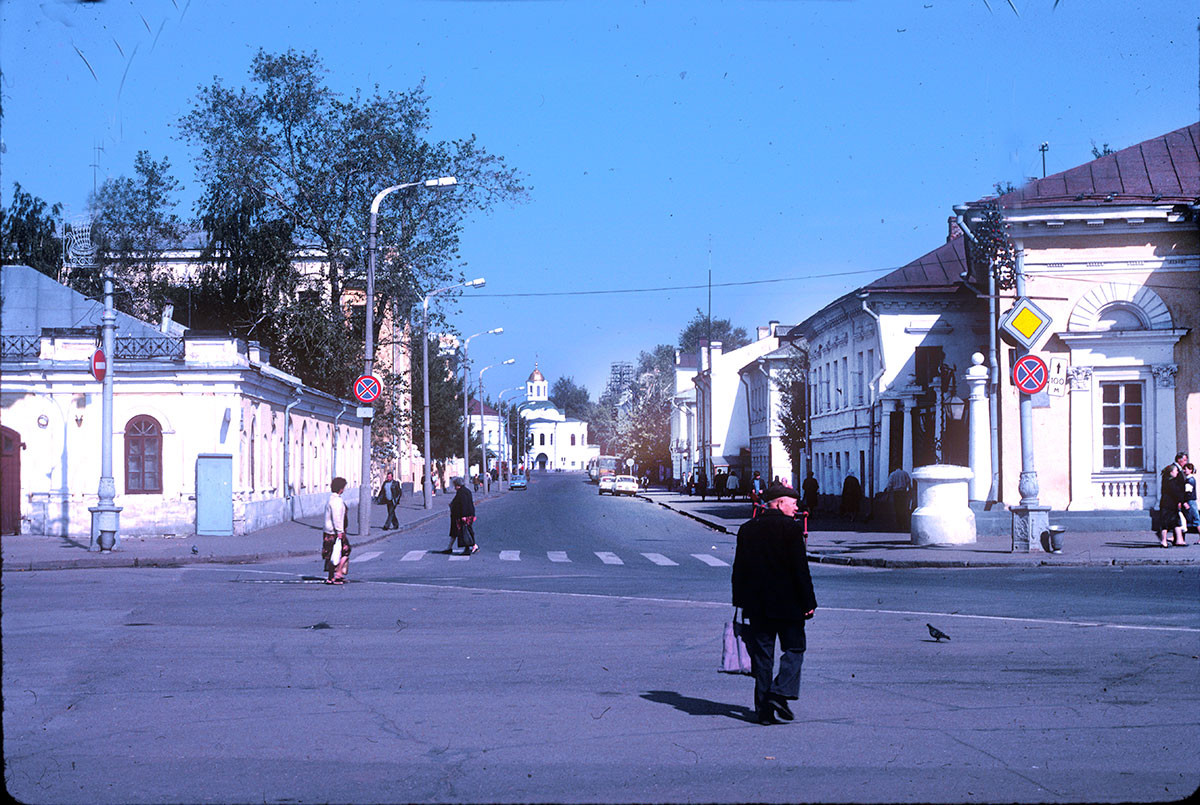 Simanovsky Street leading to Church of the Smolensk Icon of the Virgin at Epiphany Convent. Right: corner of Guard Station. Left: Corner of Fire station. August 22, 1988

The most prominent of these large rectangular courts was known as the Red Rows, so named for the elegance and fashion of the goods sold there. At the center of its Volga side is the Church of the Icon of the Most Merciful Savior in the Rows, built in the 1790s, with a bell tower added by Stepan Vorotilov in the early 19th century. Facing the Red Rows was the trading court known as the Large Flour Rows, which had similar arcaded rows. 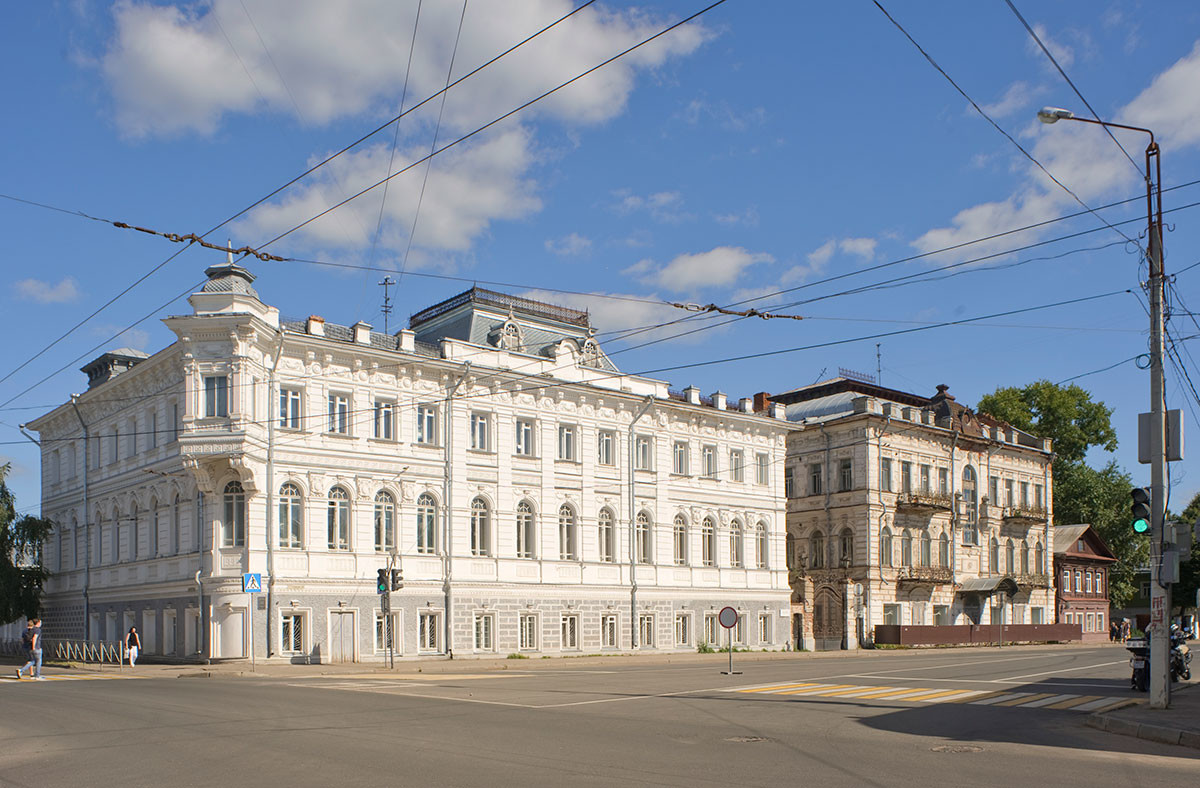 During a visit in 1835, Emperor Nicholas I presided over the rededication of the central ensemble as “Susanin Square,” in honor of Ivan Susanin, a peasant who sacrificed his life to protect Mikhail Romanov from a Polish force seeking to capture him in 1613. Nicholas was particularly interested in promulgating Susanin’s deed as a symbol of the devotion of the Russian people to their tsar.

Prokudin-Gorsky’s superb view of the Susanin Square ensemble was taken from the bell tower of the Epiphany Cathedral. The foreground shows the Trading Rows, while the Epiphany St. Anastasia Convent is visible in the distance behind the fire tower. 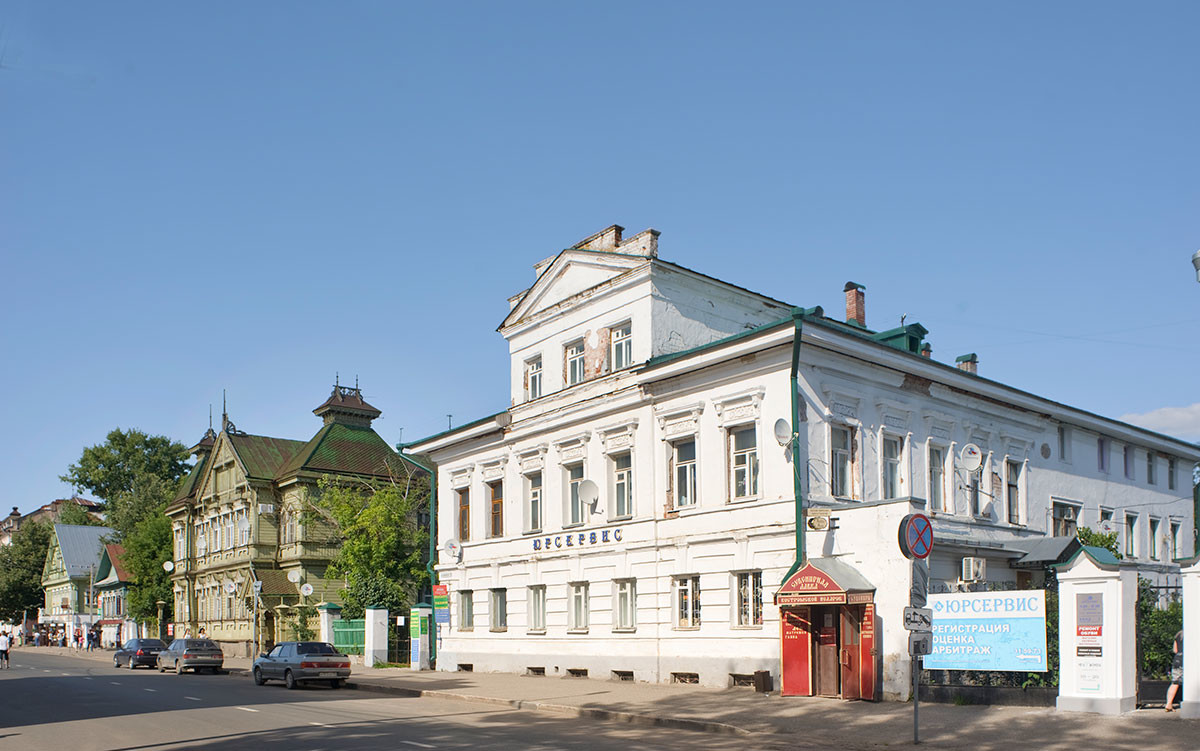 To the left of Prokudin-Gorsky’s view, the former Ekaterinoslav Street led down a slope to the Volga River embankment. During the 19th century the street was popularly known as Milky Hill by virtue of the number of milk vendors who sold their wares along it. (They crossed over from dairy farms on the opposite bank.)

Today, Milky Hill Street — now its formal name — is still lined with pre-revolutionary houses, and much that we see in Prokudin-Gorsky’s photograph has been preserved. Indeed, with the resurrection of the Epiphany Cathedral bell tower, it should be possible to enjoy once again a stunning view of this lovely Russian town. 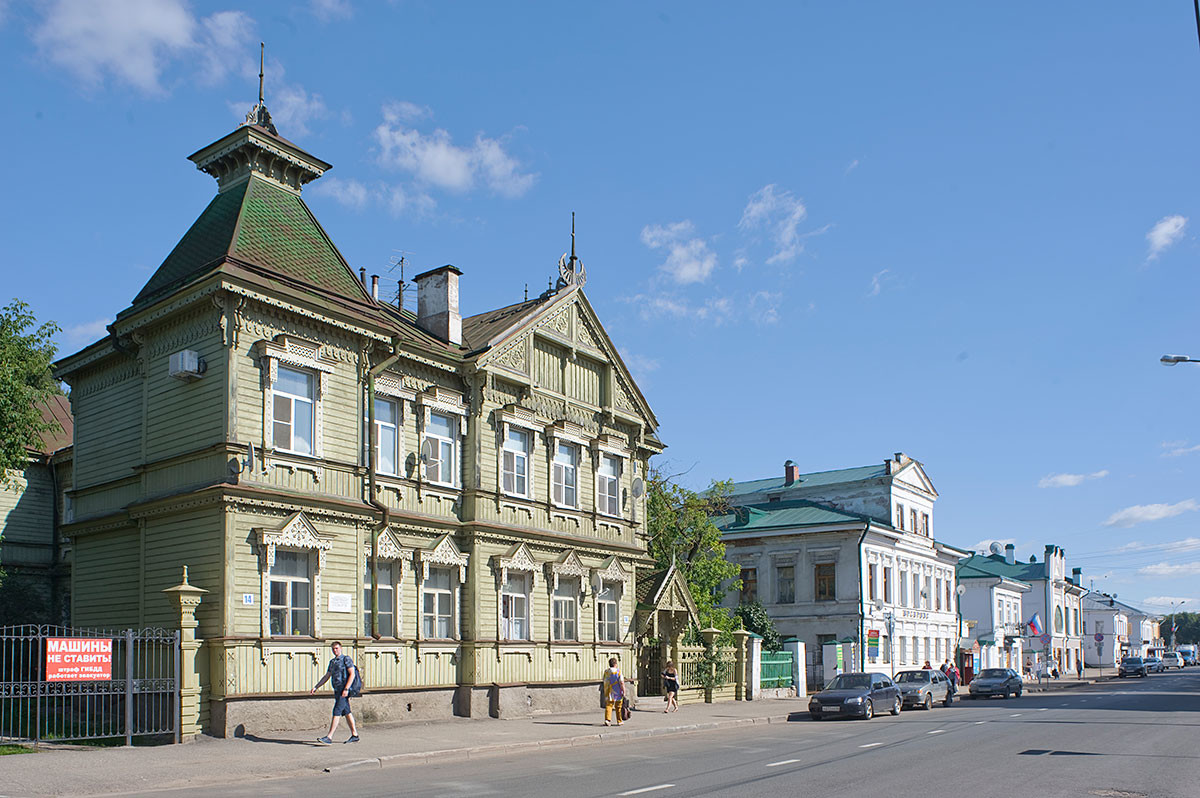