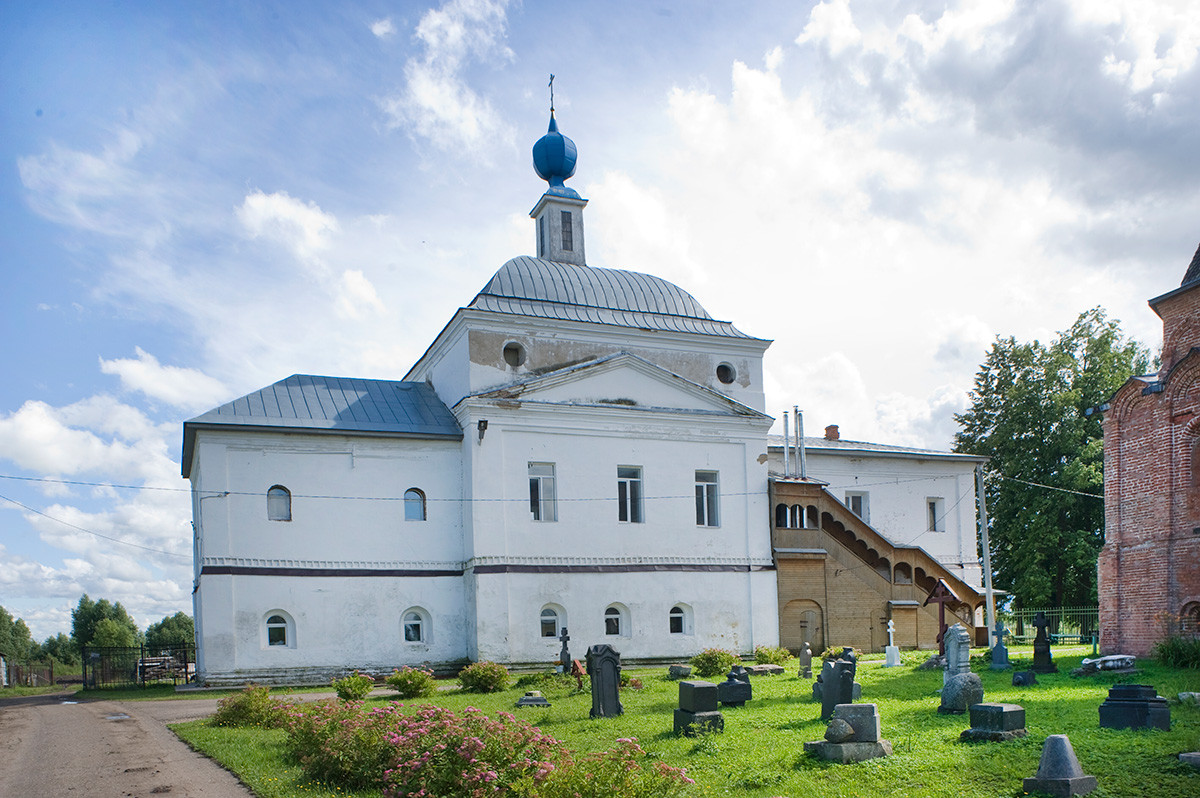 Located some 130 miles northeast of Moscow, Rostov the Great is one of the earliest known settlements in ancient Rus—first referred to in medieval chronicles under the year 862. It has long been a favorite site of tourists in central Russia thanks to its collection of ancient monasteries and churches and its well-preserved Kremlin. The Rostov Kremlin also houses one of the most distinguished regional history museums in the country. Established in 1883, it was patronized by Emperor Nicholas II beginning in 1886 when he was still heir to the throne. 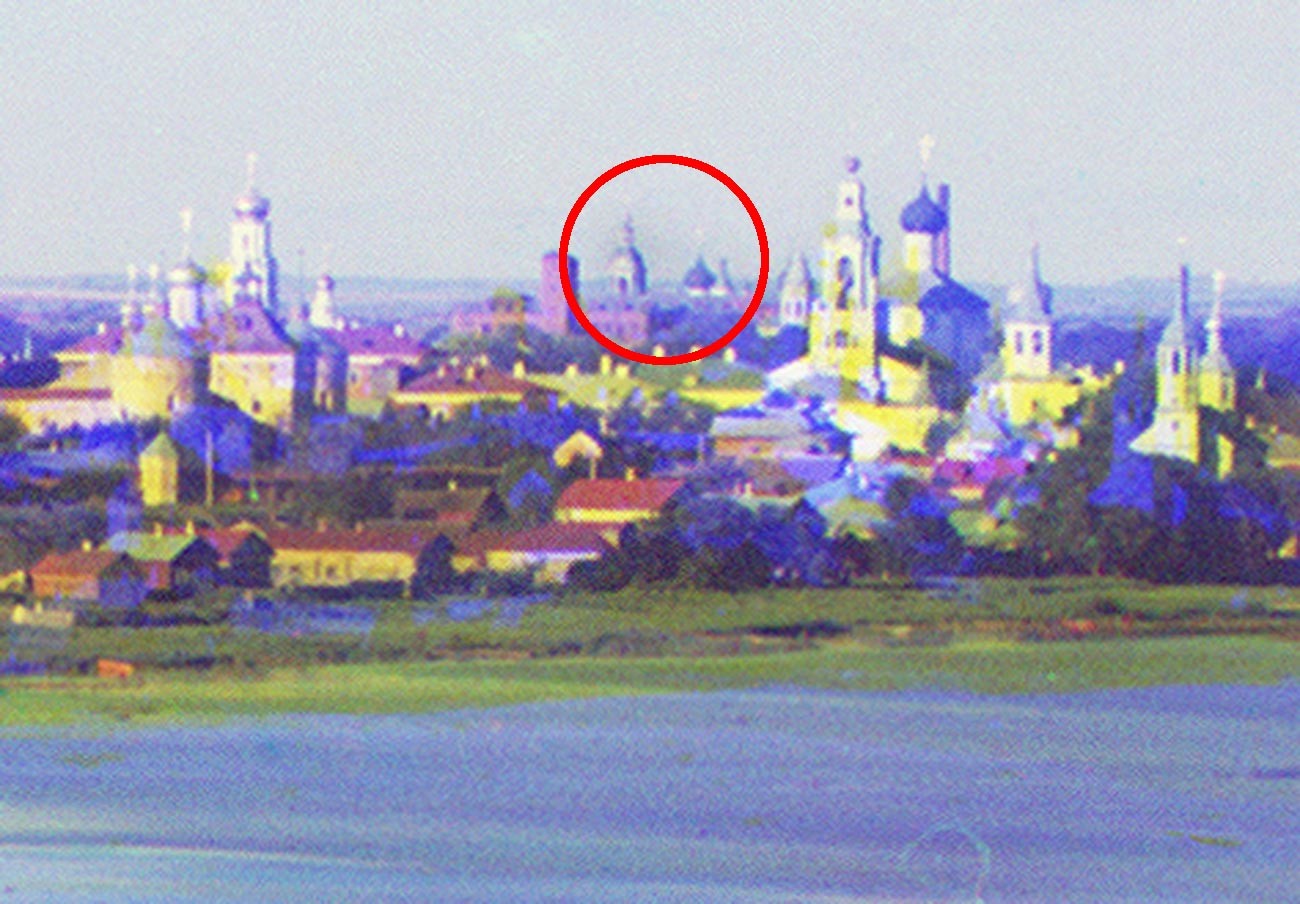 Others appear only in general views such as the Avraamy-Epiphany Monastery, one of the oldest in northeast Russia.

A destroyer of idols

Paradoxically for such a prominent historical landmark, questions remain about the early history of a monastery whose archive was destroyed by fire in 1730. The commonly accepted version is that the monastery was founded in the late 11th century by Avraamy of Rostov on the site of his victory over pagan idol-worshippers.

Although historians have divergent opinions about the identity of Avraamy and the dates of his life, the Orthodox Church considers him one of its primary early missionaries. He was canonized presumably during the Makaryev Church Councils convened by Metropolitan Makary (Macarius) of Moscow in 1547-49 to acknowledge Muscovy’s spiritual heritage and advance the cause of Russian sainthood. 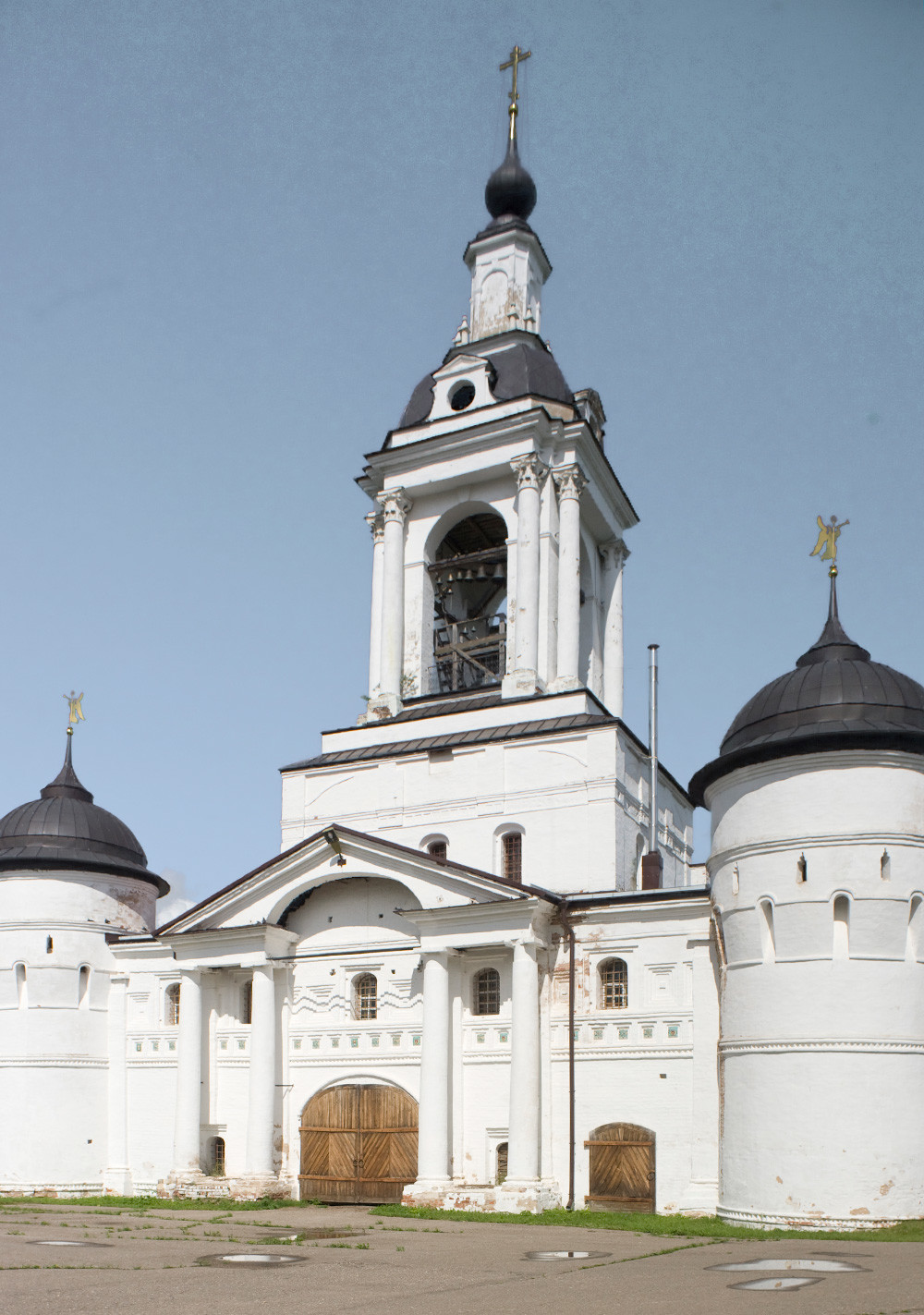 According to accounts of his life authorized by the church, Avraamy’s missionary activity occurred during the decades following the Christianization of Kievan Rus in 988. He eventually made his way to the settlement of Rostov and built a hut on the south shore of Lake Nero. At that time the local population consisted of a mixture of Finno-Ugric peoples who worshiped pagan gods. According to popular accounts, an awe-inspiring stone idol of the god Veles stood near Lake Nero and was widely venerated. 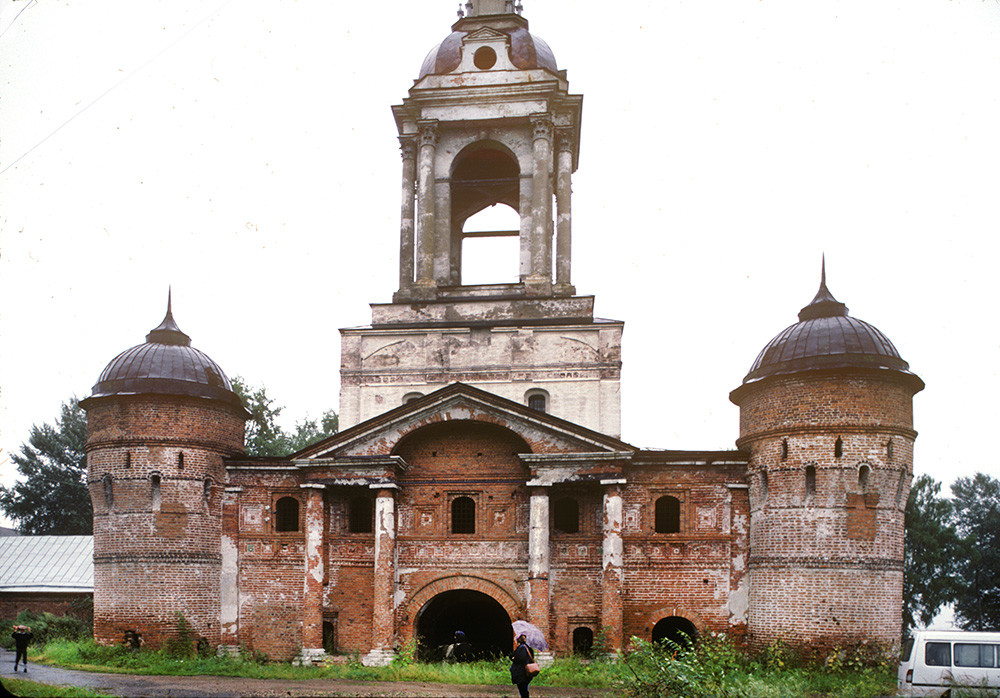 Beset by the daunting task of countering the idol’s power, Avraamy had a vision of St. John the Divine, who gave him a miraculous staff crowned with a cross. With the staff Avraamy was empowered to overthrow the stone idol and convert its worshippers to the Christian faith.

In commemoration of this triumph, he is said to have founded the Epiphany Monastery (subsequently called the St. Avraamy Epiphany Monastery) on the place where the idol had stood. Avraamy’s deed became firmly a part of local legend and his miracle-working staff was preserved at the monastery, which consisted of log structures. 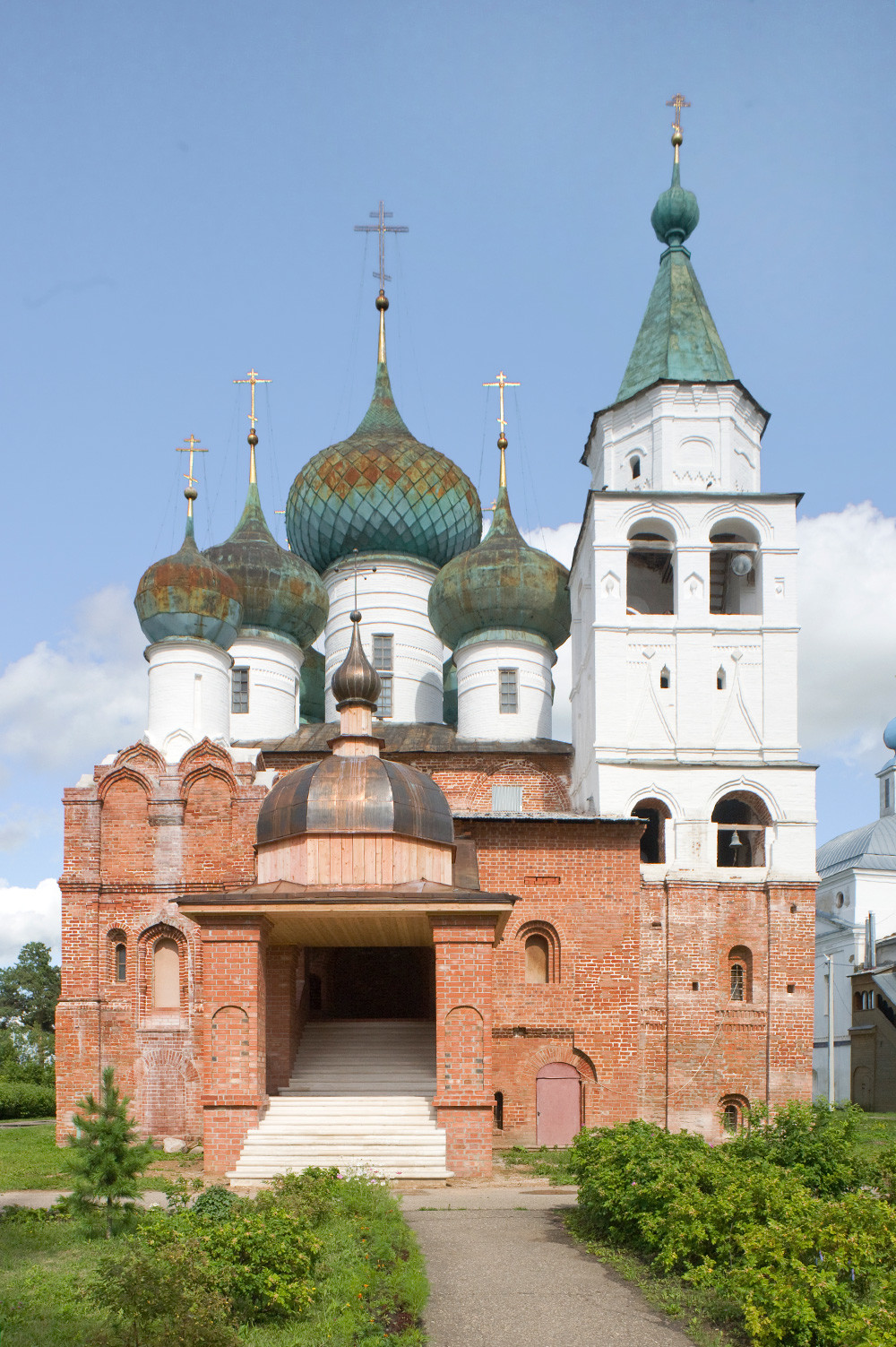 The monastery’s status greatly increased when Ivan the Terrible made a pilgrimage there during preparations for his final, epochal campaign in the fall of 1552 against the city of Kazan on the Volga River. As a culmination of the visit, the monastic brethren presented the miraculous staff of St. Avraamy to accompany Ivan on his campaign. In turn, Ivan vowed to erect a church at the monastery upon his triumphant return in 1553.

In fact, Ivan initiated the construction of more than one votive shrine to commemorate his conquest of Kazan. The most famous of these is St. Basil’s on Red Square, built in 1555-61.

But earlier than this was the Cathedral of the Epiphany (1553-55), the first masonry structure at the St. Avraamy Monastery. Indeed, it has been suggested that the Epiphany Cathedral, with its varied, asymmetrical forms, prefigures features of the remarkable design of St. Basil’s. The main square structure, elevated above a ground floor and crowned with five cupolas, serves as a core for other components including a porch and elevated gallery (rebuilt in 1818) along the west façade. 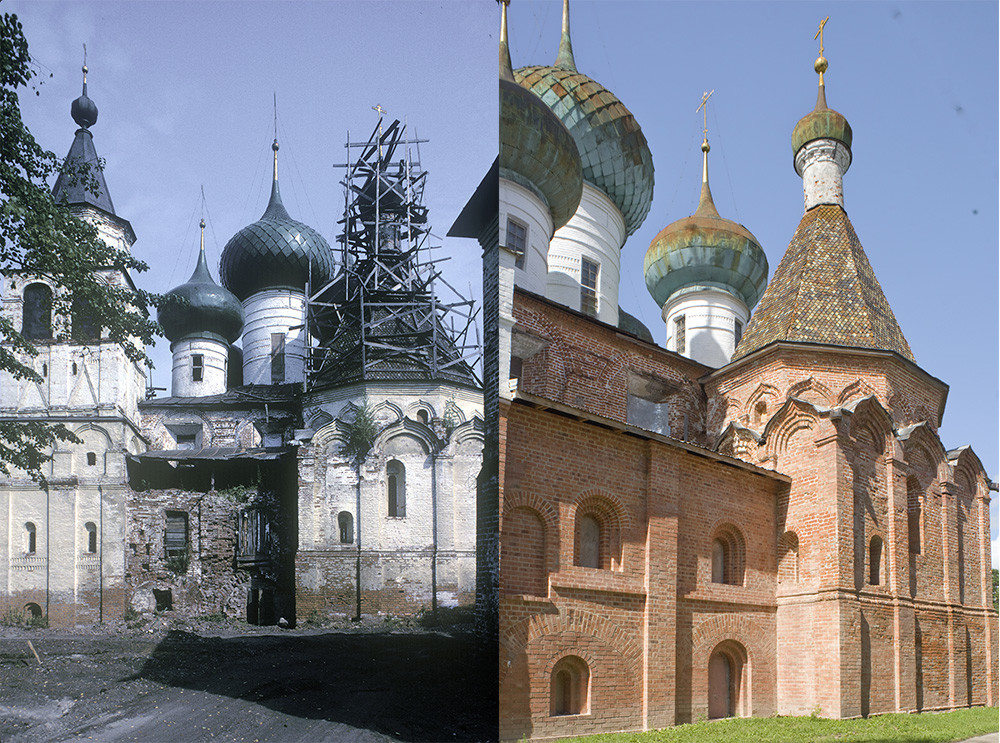 The gallery is flanked by two chapels, one of which—on the left (north) corner—was consecrated to John the Baptist while the other—on the south corner—was dedicated to St. John the Divine. Both dedications represent heavenly patrons of Ivan, whose name is the Russian form of “John”. The southwest Chapel of St. John serves as the base for a soaring bell tower with a “tent” shaped crown.

The cathedral’s final picturesque component is a chapel dedicated to St. Avraamy and located at the southeast corner. It too is capped with a “tent” tower of a type favored during Ivan’s reign. There is no surviving evidence of the interior decoration in the late 16th century. 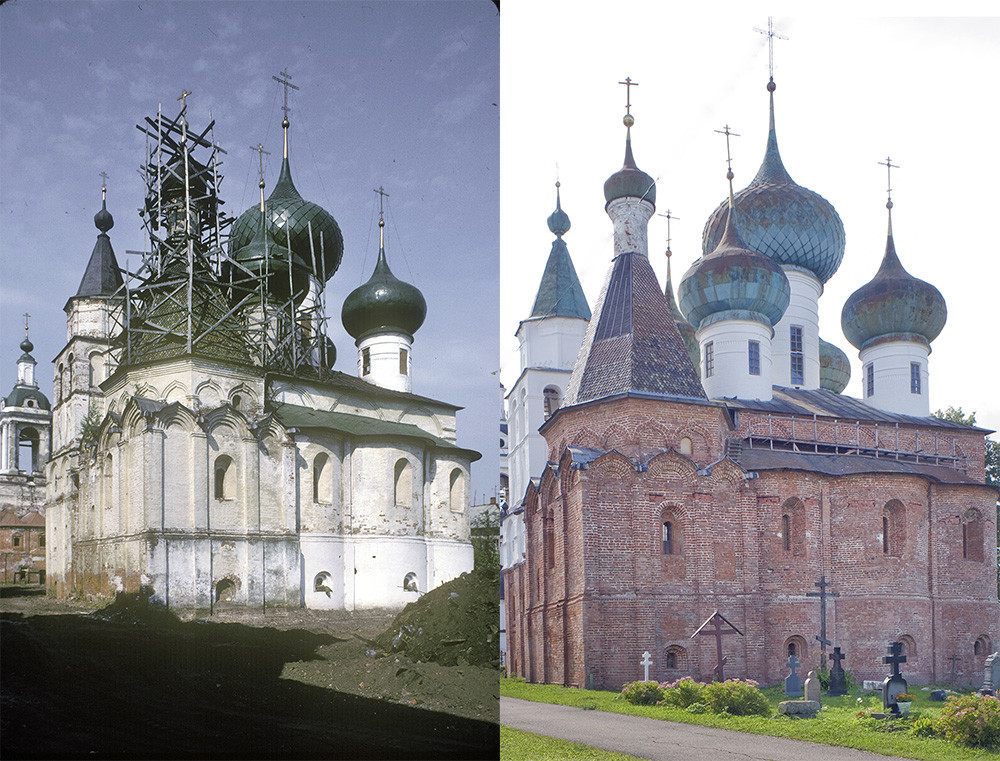 During a prolonged national dynastic crisis known as the Time of Troubles at the beginning of the 17th century, the St. Avraamy Epiphany Monastery was devastated in 1609 by Polish forces as part of their sack of Rostov. The Epiphany Cathedral remained the monastery’s sole brick church until the mid-17th century.

The monastery’s fortunes improved under the guidance of Jonah Sysoyevich (ca. 1607-1690), one of the most prominent figures in 17th century Russian church history. The son of a country priest named Sysoy, he was tonsured at the Resurrection Monastery in Uglich.

Jonah rose through the monastic hierarchy and in 1646 was appointed abbot (archimandrite) of the St. Avraamy Monastery, where he served from 1646 to 1652. During this period, he guided the construction of the Church of the Presentation of the Virgin, built with a refectory (dining hall) and connected to the south side of the Epiphany Cathedral by a gallery (subsequently demolished). The remains of Jonah’s father, Sysoy, were interred in this church.

Jonah is also thought to have erected a small church dedicated to St. Nicholas above the Holy Gate, the monastery’s main entrance in the west. Both churches were later substantially reconstructed. 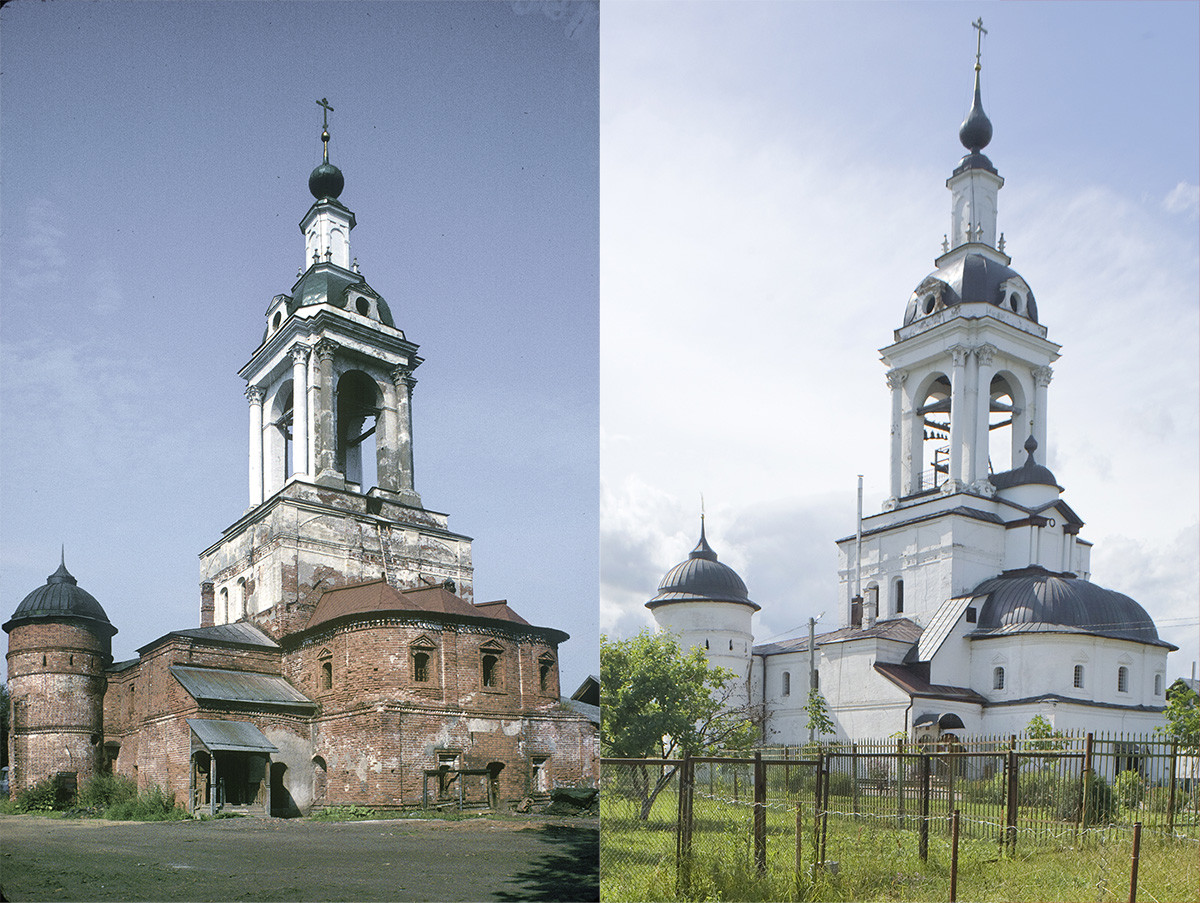 Left in the shadow of this gargantuan construction, the St. Avraamy Monastery witnessed modest improvements. In the late 1680s the Meshchersky boyar family gave funds to reconstruct the Church of St. Nicholas with master builders provided by Metropolitan Jonah. Brick walls and towers were also added in the latter part of the 17th century, but only two towers flanking the Holy Gate remain.

The St. Avraamy Epiphany Monastery was severely damaged as a result of the great Rostov fire of 1730. Restoration work was supported with funds provided by Empress Anna Ioannovna, which enabled the painting by local artists of the interior of the Epiphany Cathedral in 1736. This work was effaced by crude overpainting in oils during the 1870s. 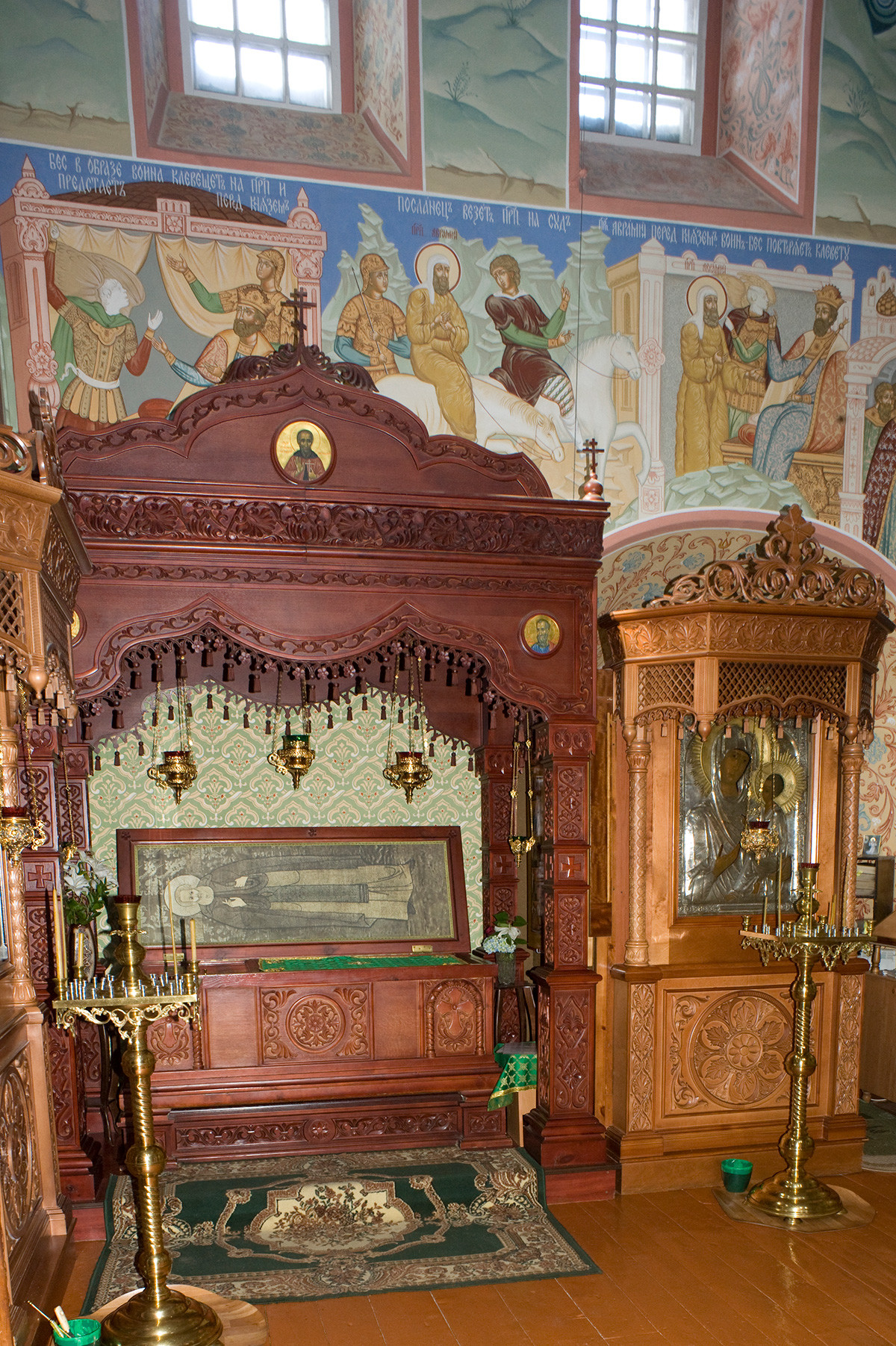 At the beginning of the 19th century, reconstruction of the Presentation Church was completed by the architect Peter Pankov in an austere, provincial neoclassical style. After a fire in 1826, the St. Nicholas Church was restored by Pankov, who over the next decade added a tall neoclassical bell tower visible in Prokudin-Gorsky’s distant view. 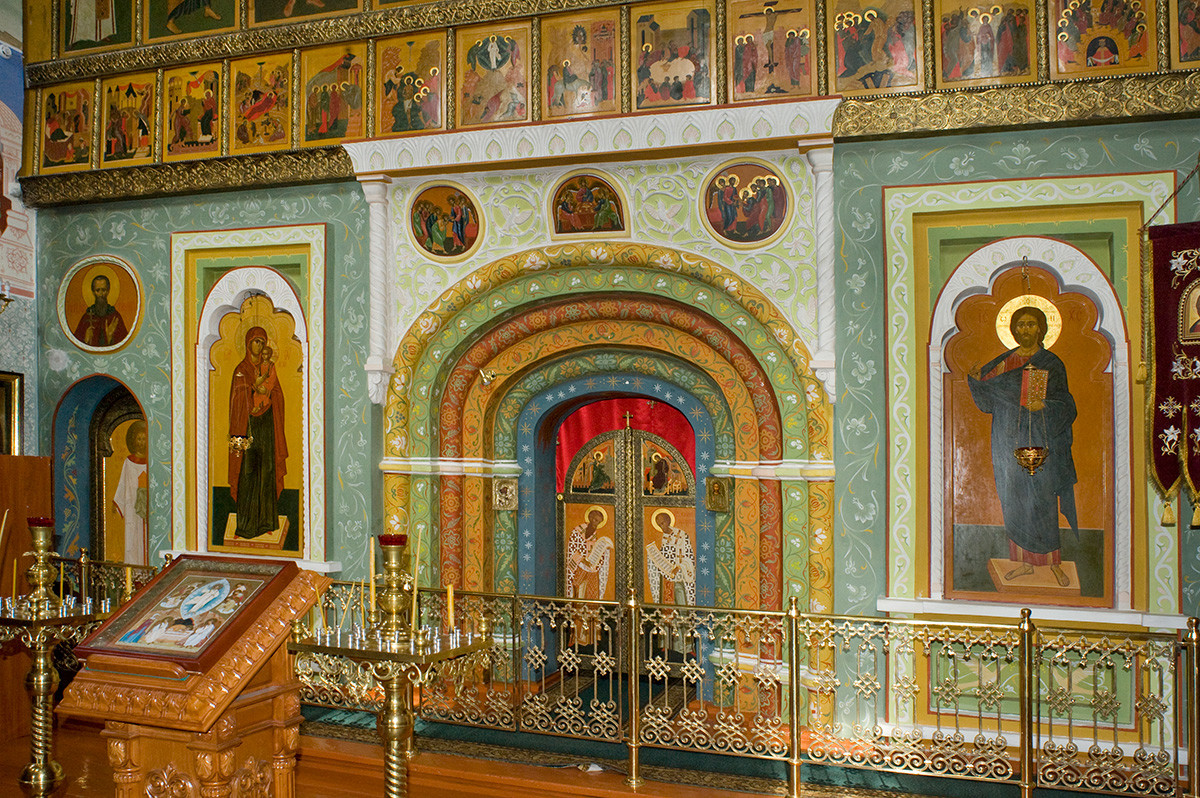 In 1929 all religious activity ceased in the former monastery. The Epiphany Cathedral was converted for use as a grain storage facility. Various restoration efforts during recent decades have done little to address serious structural problems, and the cathedral interior has long been off limits. After 1929 the Presentation Church was adapted for various uses, including a kindergarten and a sobriety station. 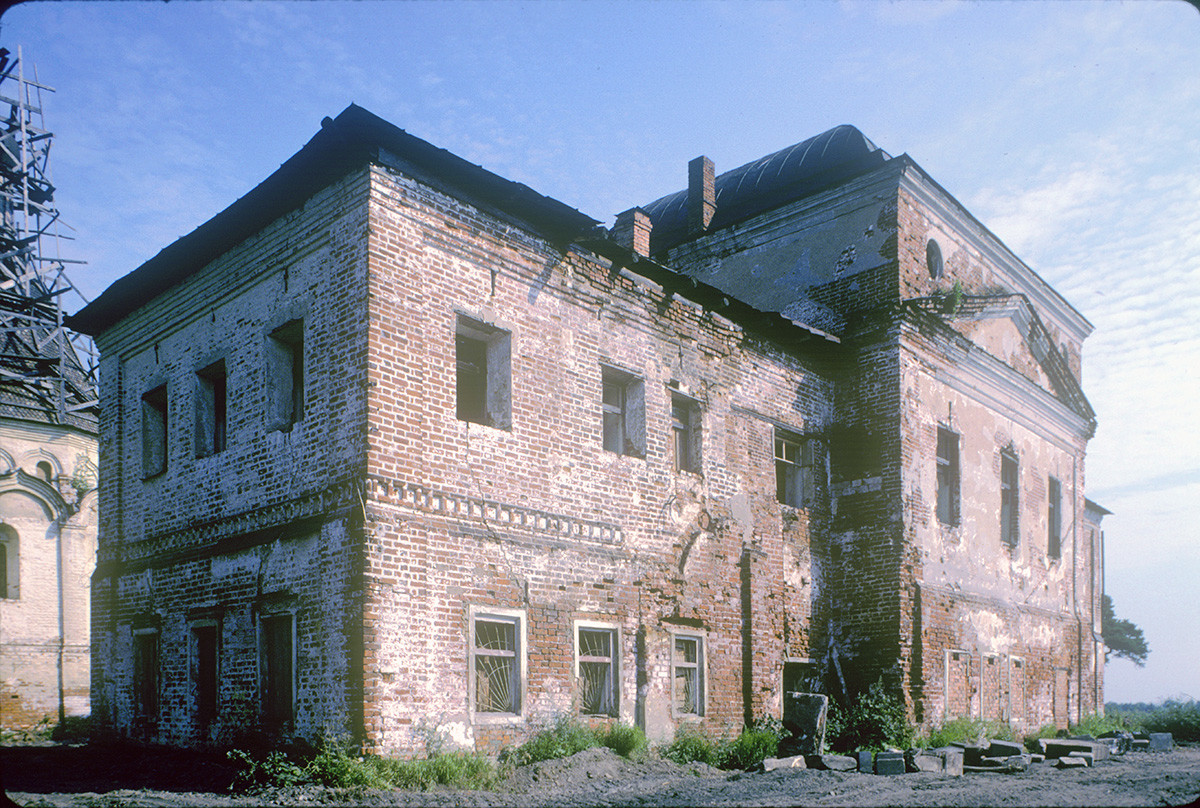 St. Avraamy Epiphany Monastery. Church of the Presentation of the Virgin, southwest view before restoration. July 29, 1997

In 1993 the St. Avraamy Monastery was returned to the Orthodox Church as an affiliate of the Andronikov Monastery in Moscow. In 2004 the monastery was revived for use as a convent. Of its three churches, the St Nicholas Church has been fully restored to active use and now contains the relics of the ancient monastery’s founder, St. Avraamy of Rostov. 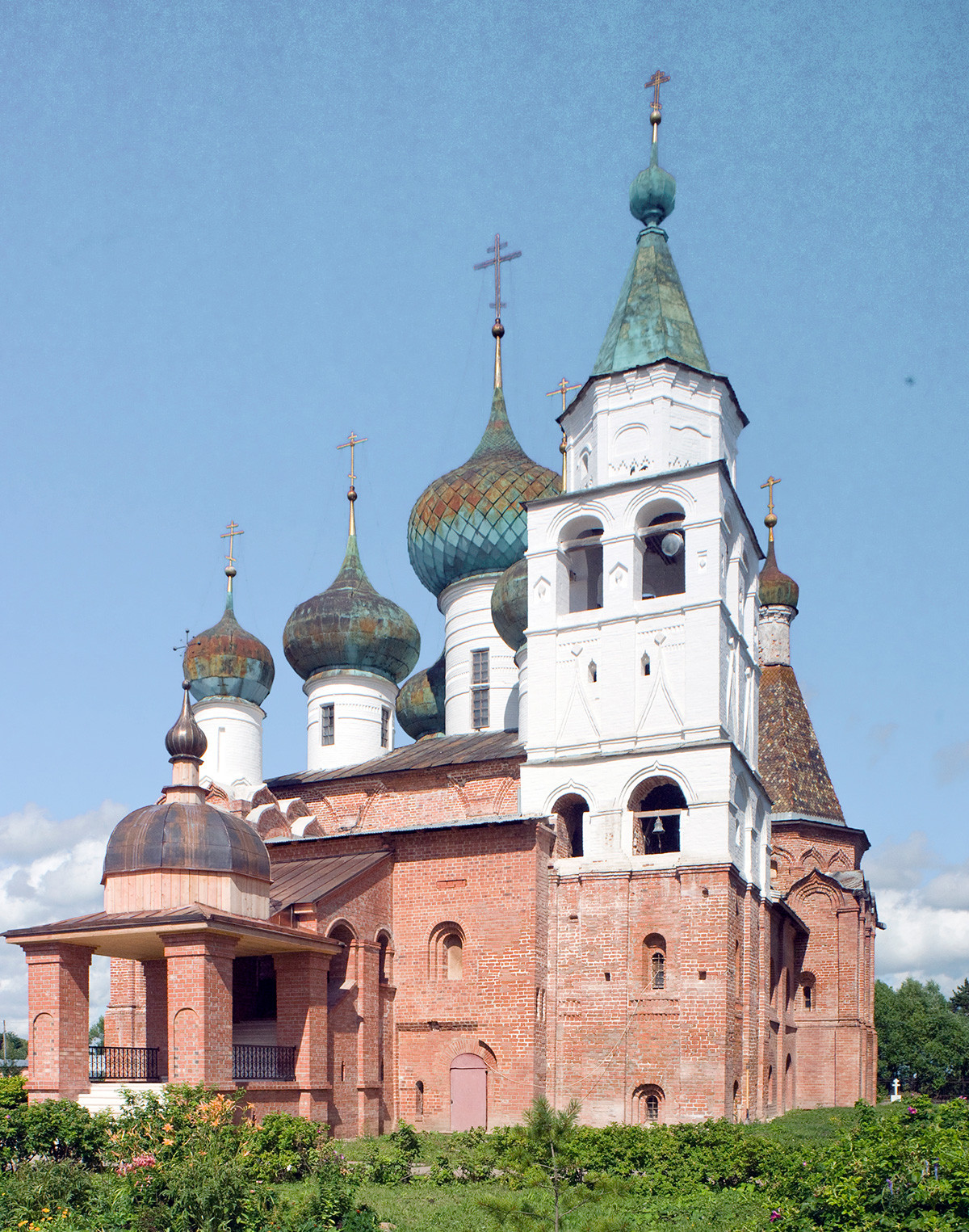