Restoring an ancient cathedral in Rostov 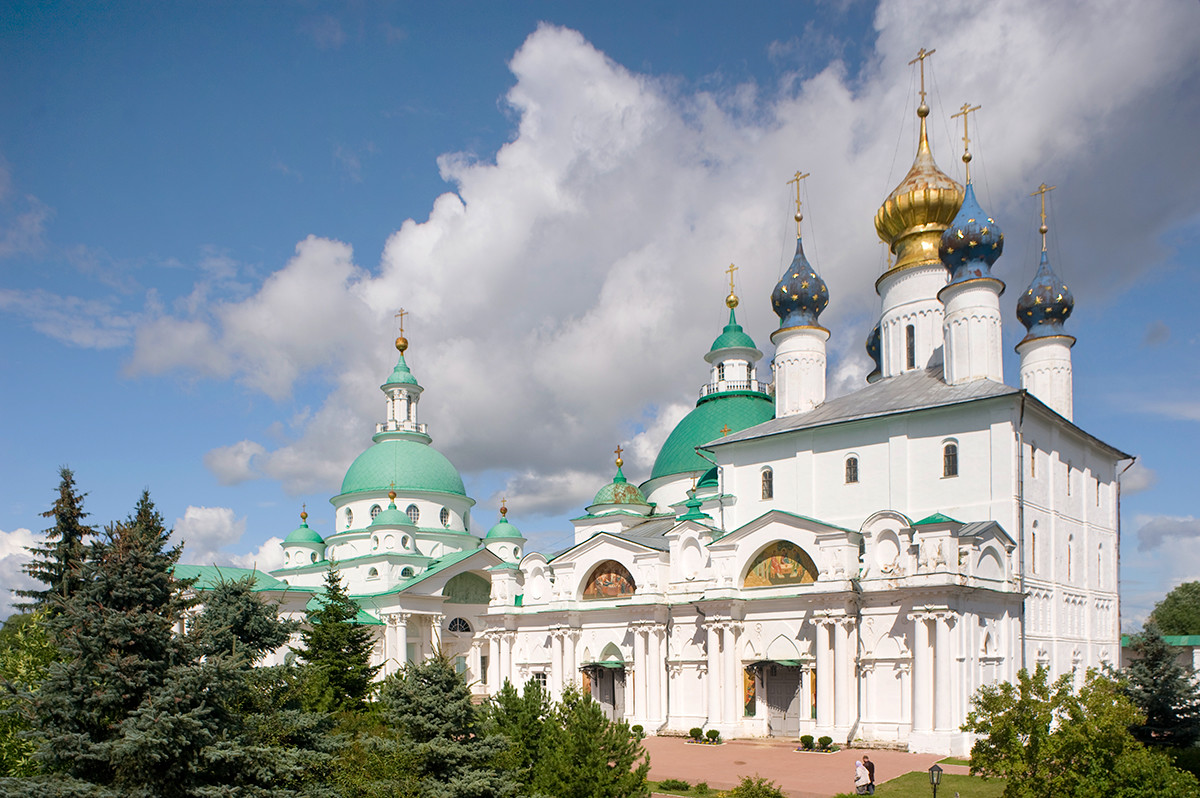 The medieval town of Rostov (often referred to as “the Great” (Rostov Veliky) to distinguish it from the southern city Rostov-on-Don) benefits from a superb natural setting on the north shore of Lake Nero. Nowhere is this lyrical beauty more evident than at the Savior-St. Yakov-St. Dimitry Monastery, located on the western edge of town. In 1911, Russian photographer and chemist Sergei Prokudin-Gorsky took several photographs of the ensemble during his visit to the town, part of his journey to document the diversity of the Russian Empire in the early 20th century. My own photographs of the monastery were taken over a period from 1992 through 2019. 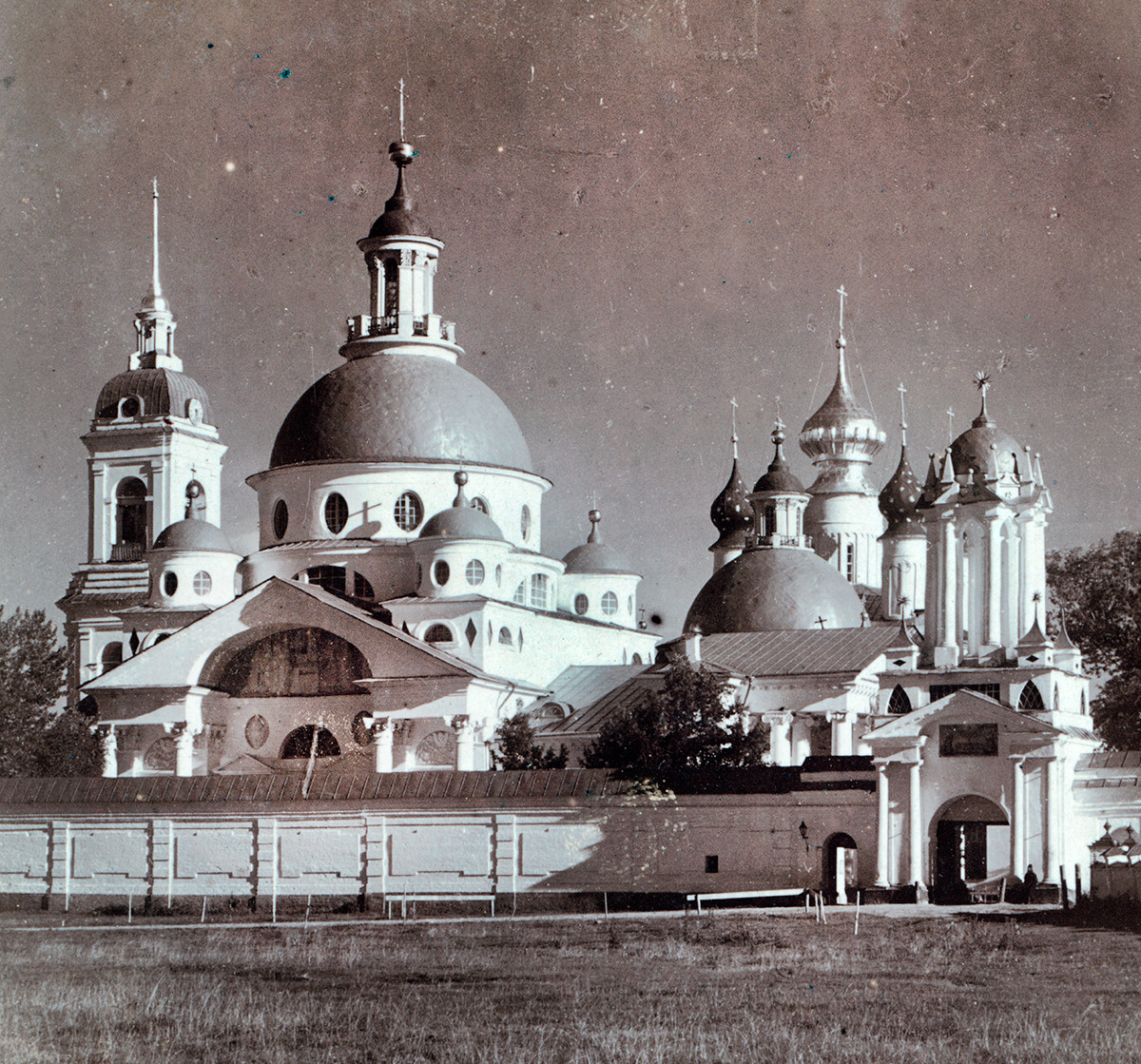 Rostov is one of the earliest historically attested towns in Russia, first mentioned under the year 862 in the ancient chronicle "Tale of Bygone Years."  Throughout the 10th century, Slavic settlers – primarily from the Novgorod lands – moved into this area, already inhabited by Finno-Ugric tribes.

In 988, Prince Vladimir of Kiev, the Christianizer of Russia, gave the Rostov lands to one of his sons, Yaroslav, a major figure who subsequently became known as "Yaroslav the Wise." By the middle of the 11th century, the Rostov lands had passed to Yaroslav's son Vsevolod, and Christian missionaries such as Leonty of Rostov intensified their attempt to convert a largely pagan local population. Bishop Leonty was martyred for his efforts in the early 1070s. 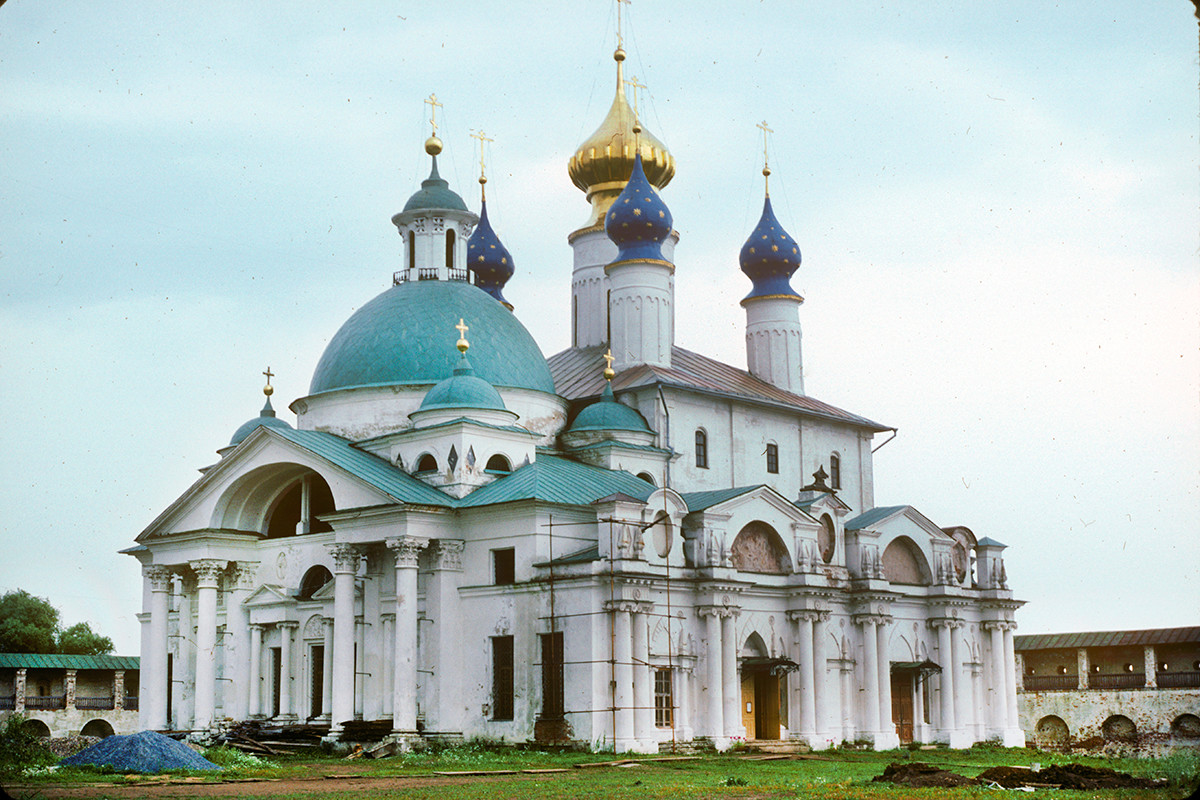 The consolidation of church authority was symbolized by Rostov's Cathedral of the Dormition of the Virgin Mary, begun in the mid-12th century by Prince Andrei Bogolyubsky of Vladimir and rebuilt by Prince Konstantin Vsevolodovich in the 1220s.

On the western edge of town, yet another cathedral with ancient roots is undergoing a prolonged restoration to regain a measure of its 17th-century glory. Now known as the Cathedral of the Conception of St. Anne at the Savior-St. Yakov Monastery, this monument was also photographed by Prokudin-Gorsky as part of his extensive work in a monastery that is one of Russia’s most prominent spiritual centers. 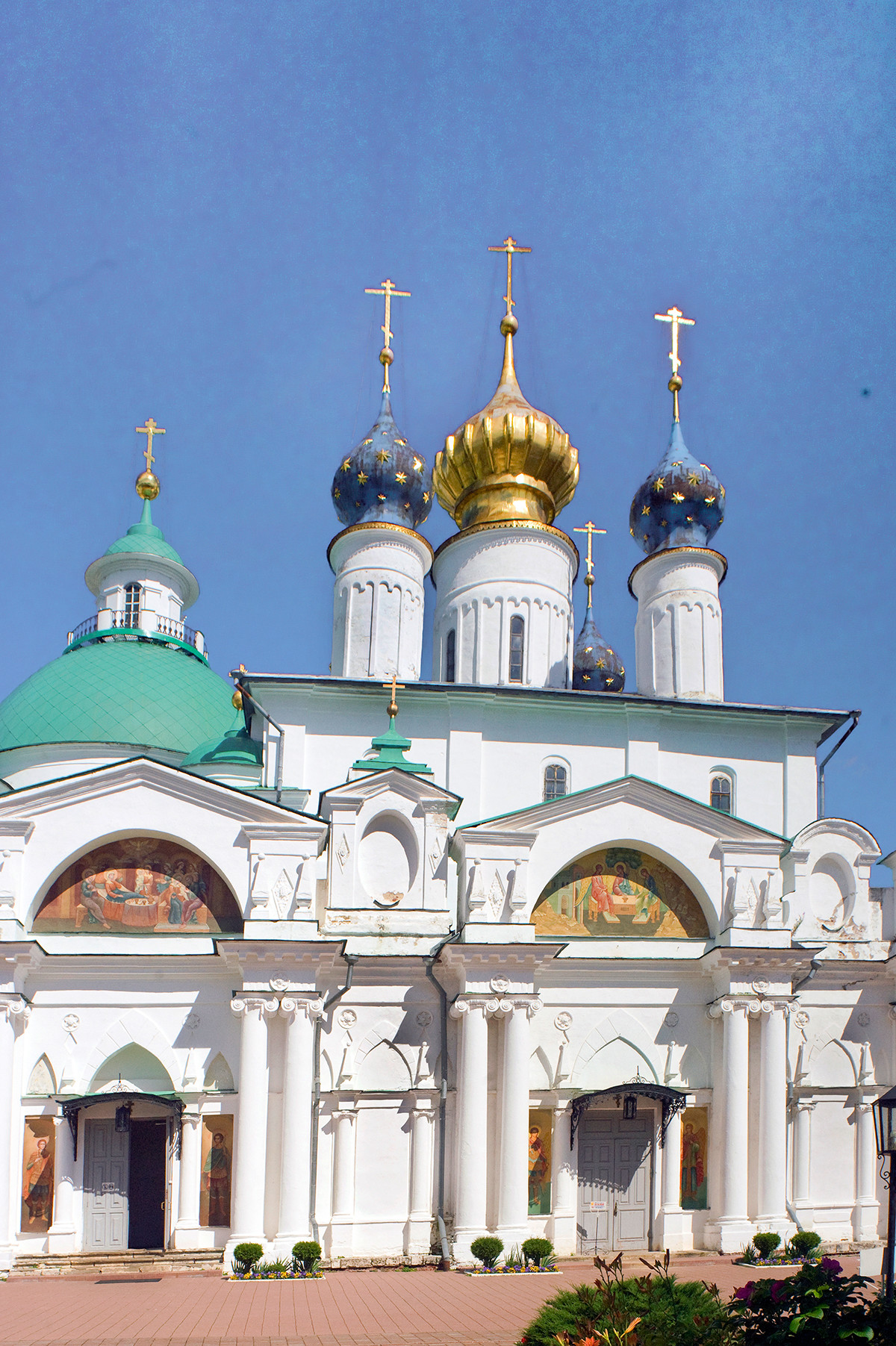 This monastery traces its beginnings to 1389 when one Yakov, a former bishop of Rostov, retreated from the town to a site on Lake Nero near the Church of Archangel Michael, founded by Bishop Leonty in the mid-11th century. There, Yakov built a log church dedicated to the Conception of St. Anne.

After Yakov’s death in November of 1392, his remains were buried at the Conception Church, and his saintly ministry was venerated locally. In the late 1540s, he was canonized at the famous Orthodox Church convocation organized by Moscow’s Metropolitan Macarius to recognize Russian saints. 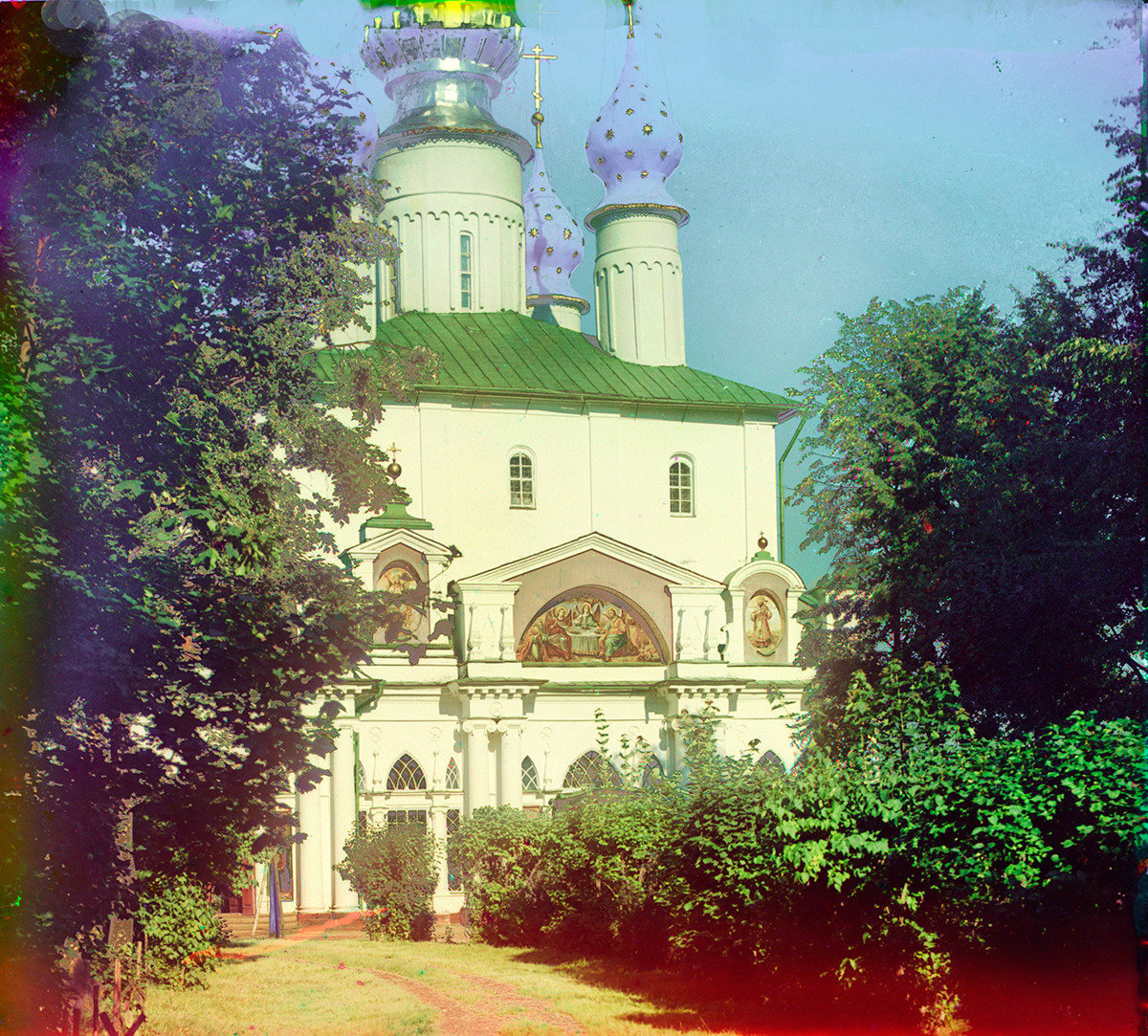 Cathedral of Conception of St. Anne. West view with painting of Old Testament Trinity on tympanum of narthex pediment. Summer 1911

During the first centuries of its existence, the monastery was known as Conception- St. Yakov. Its earliest masonry structure, now known as the Cathedral of the Conception of St. Anne, was originally dedicated to the Holy Trinity and was built in 1686 on the site of the wooden Conception Church where St. Yakov was buried.

The Trinity Cathedral reflected the intensive building activity of Metropolitan Jonah of Rostov, creator of the majestic Metropolitan’s Court (popularly known as the Rostov Kremlin). 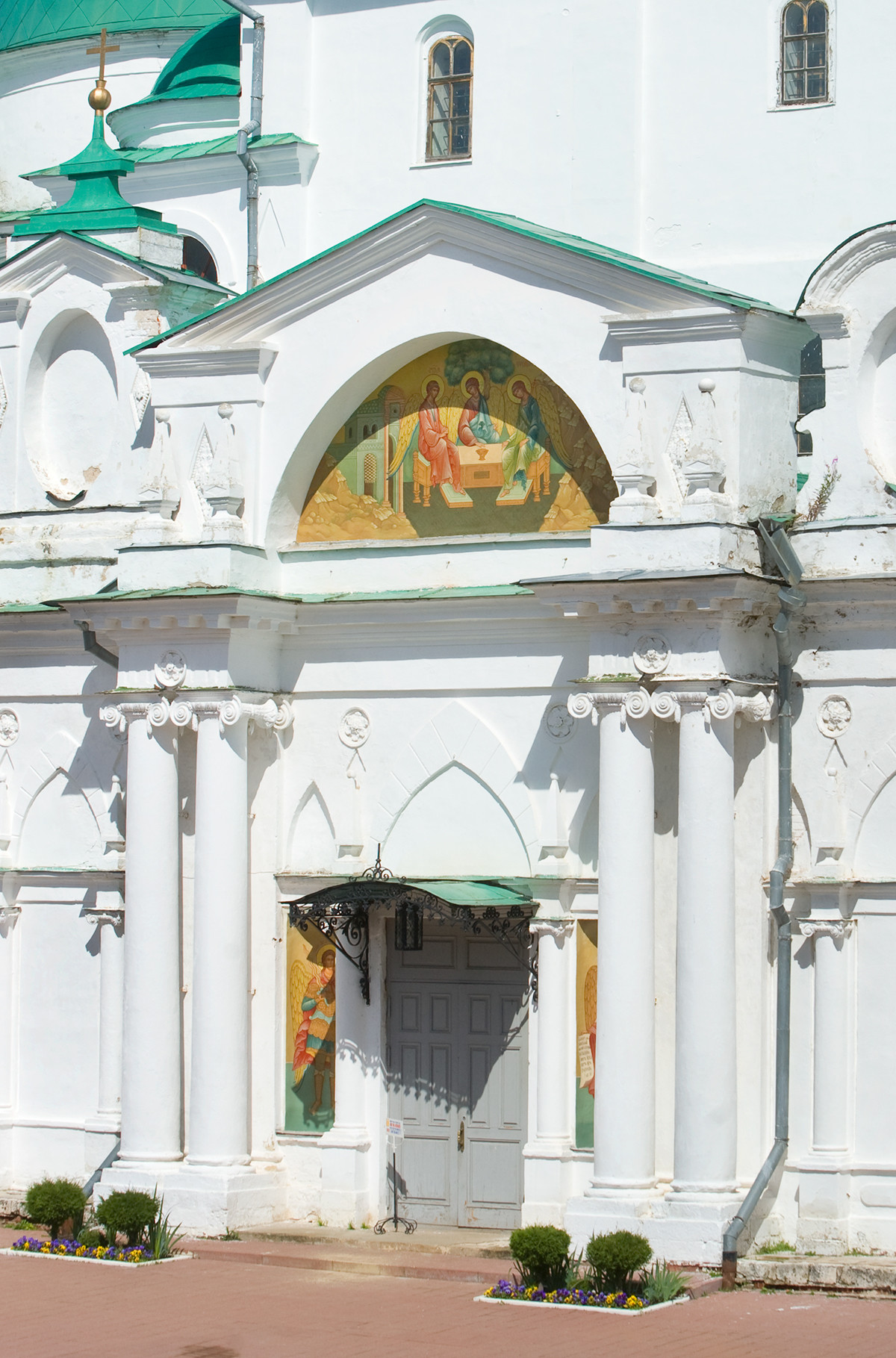 On the exterior, the cathedral facades are divided into three segments with minimal ornamentation. The four-sloped roof is crowned with five cupolas, elevated on cylinders known as drums. The cupolas’ baroque outlines are the product of 18th-century modifications. Prokudin-Gorsky photographed a portion of the west façade framed in summer foliage.

During 1689-90 the cathedral interior was painted in frescoes by a group of artists under the guidance of the Yaroslavl master painter Dmitry Plekhanov. These frescoes were “renewed” in 1778, but a cleaning and restoration now seeks to regain some of the original painterly work. 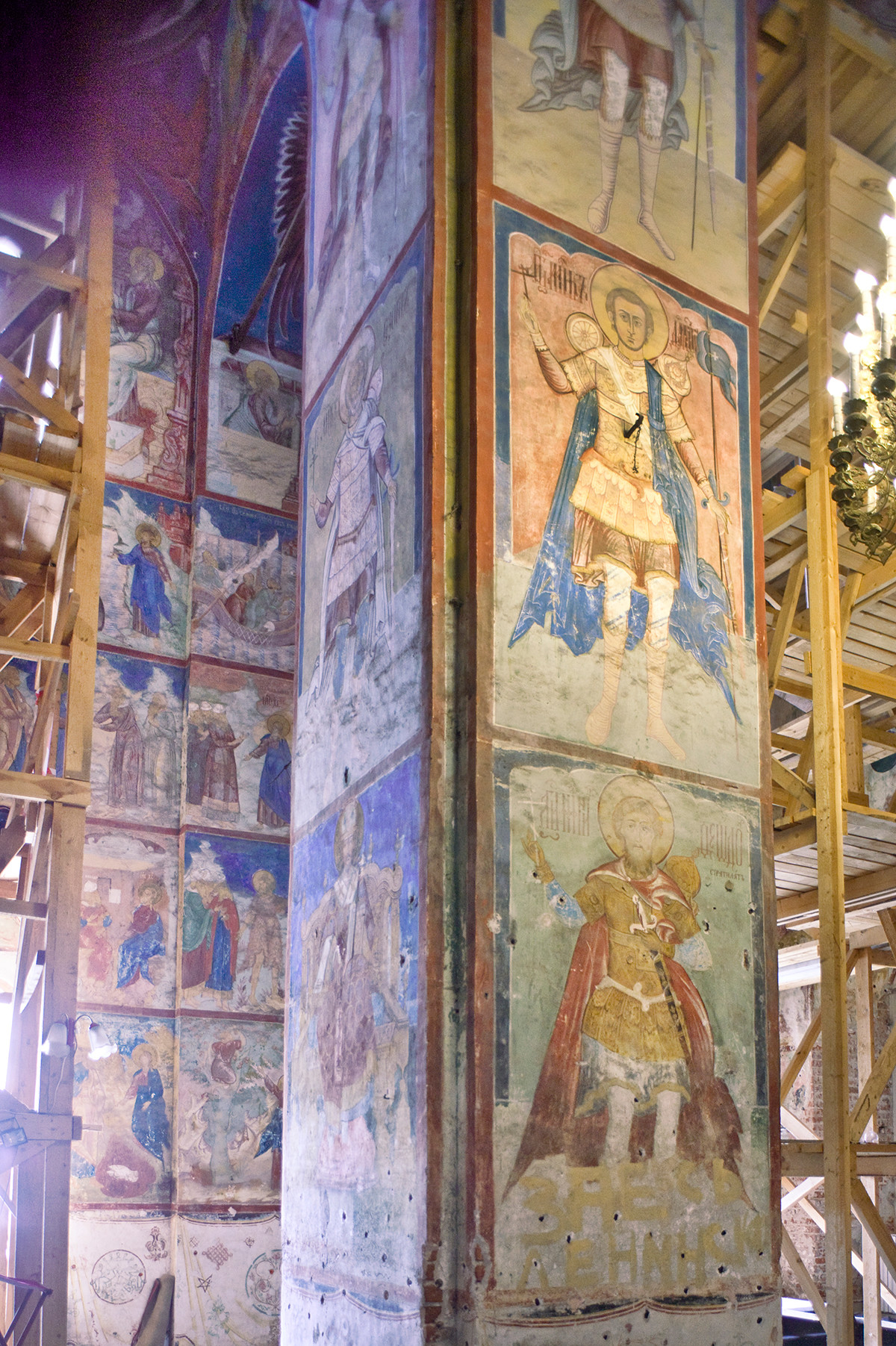 In the early 1760s an elaborate baroque icon screen was installed, but it was dismantled during the Soviet period. Although Prokudin-Gorsky did not photograph the interior, I have included a selection of photographs from 2019 to give an impression of the space.

During the 18th century, the monastery experienced a transformation associated with the arrival in 1702 of Metropolitan Dimitry (Tuptalo), a Ukrainian prelate greatly esteemed for his erudition and appointed by Tsar Peter I (the Great) to the position of Metropolitan of Rostov. 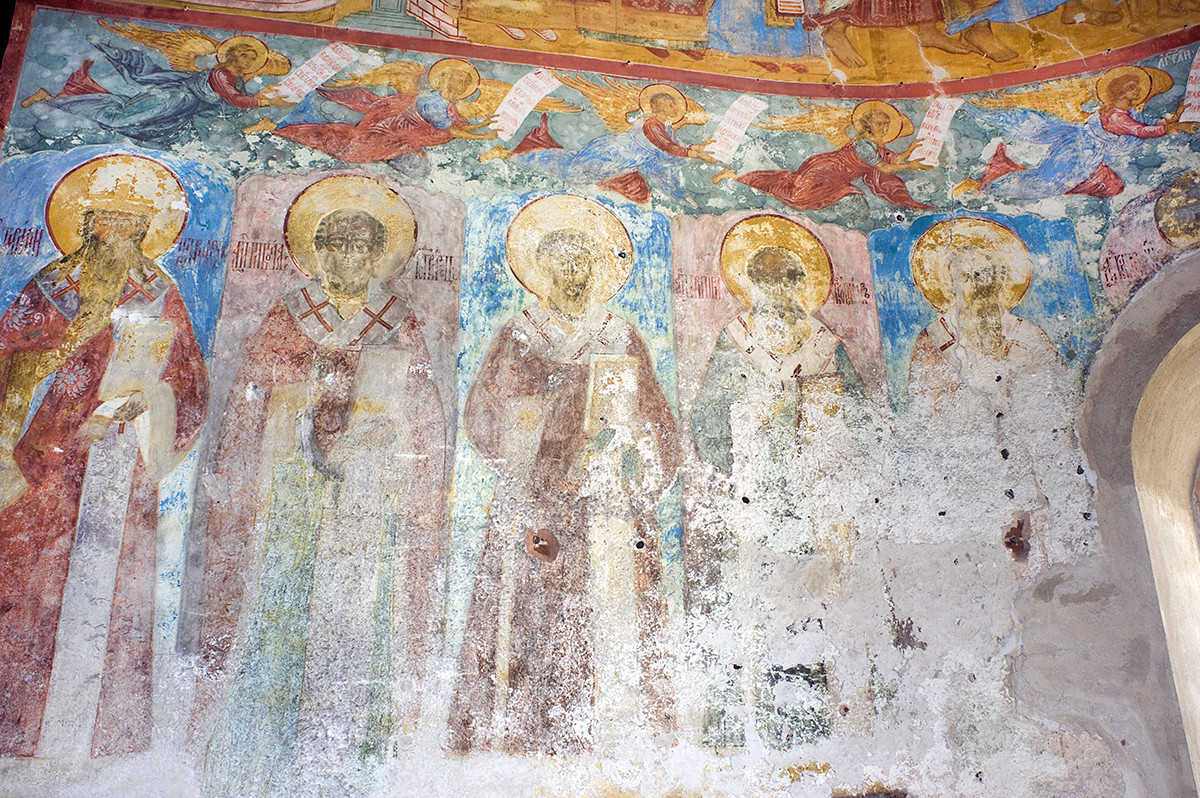 From the time of his arrival at the Conception- St. Yakov Monastery, Dimitry proclaimed his wish to be laid to rest in the Trinity Cathedral rather than in the Dormition Cathedral at the center of Rostov, where the area’s prelates were traditionally buried. Dimitry’s burial in 1709 proved a defining moment in the monastery’s ascent to prominence. In 1725, a church dedicated to St. Yakov was built onto the north façade of the Trinity Cathedral. 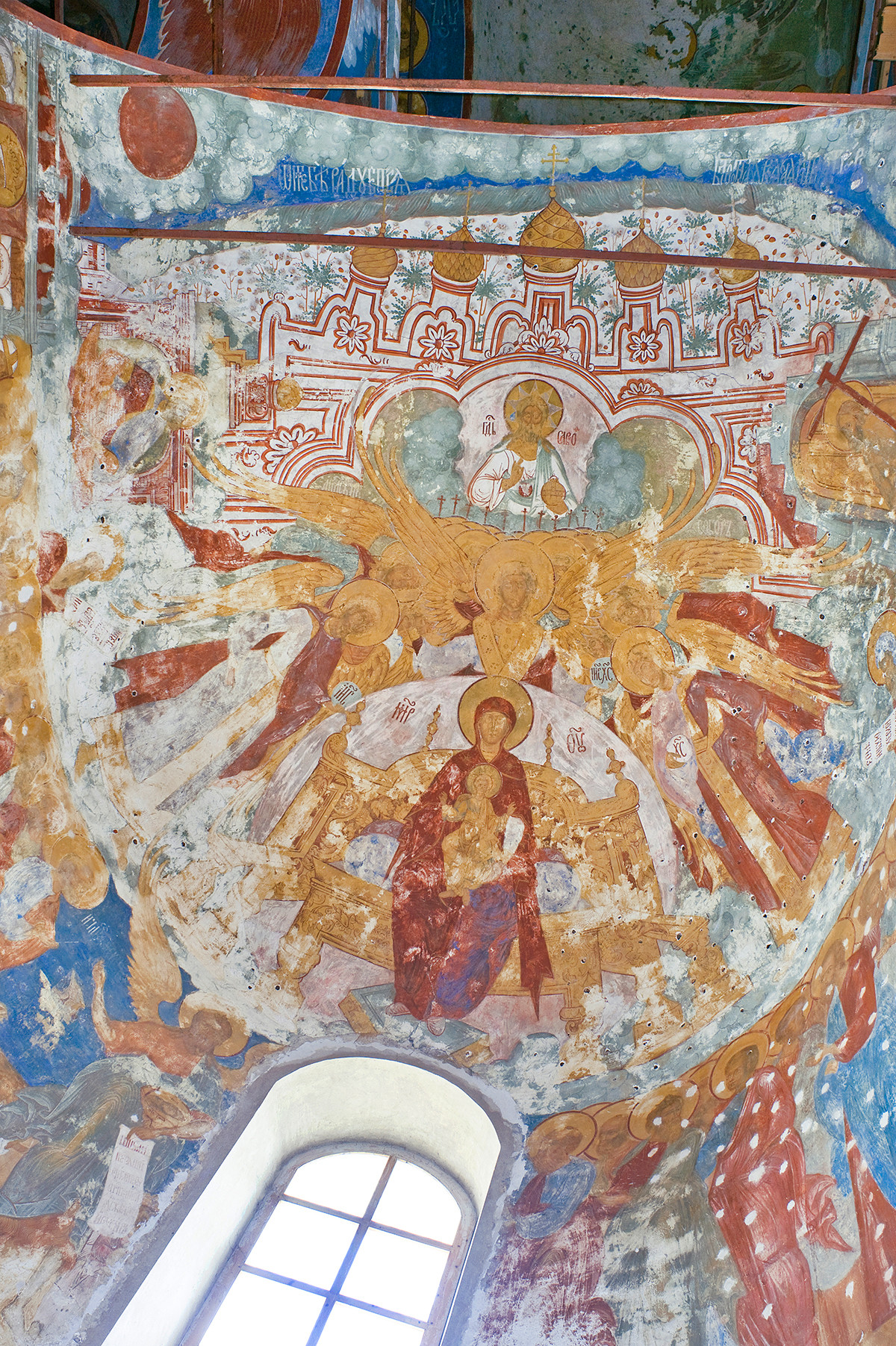 In 1752, Dimitry’s remains were uncovered during a repair of the Trinity Cathedral floor. Two years later, the cathedral was rededicated to the Conception of St. Anne in honor of the original monastic shrine built by Yakov.

With the canonization of Dimitry of Rostov in 1757, Empress Elizabeth (Peter the Great’s daughter) made lavish donations, including a silver sarcophagus to hold the saint’s relics in the Conception Cathedral. (This remarkable object was melted down by the Bolsheviks in 1922.) 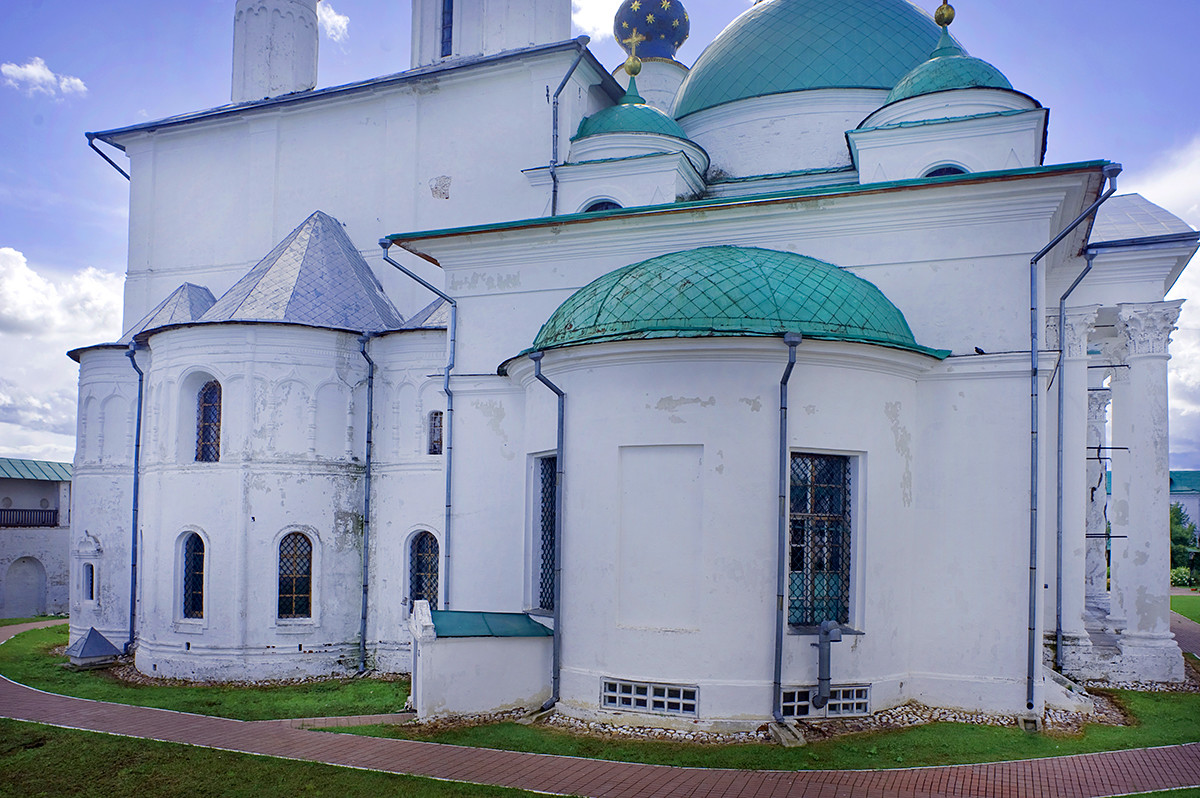 A major enhancement in the monastery’s prestige occurred during the reign of Catherine II (the Great), who chose the monastery for her first pilgrimage as empress in late May 1763. The following year, the monastery was elevated in status to be supervised directly by the Holy Synod, the main governing body of the Russian Orthodox Church from 1721 to 1917. This assured it of major financial support. 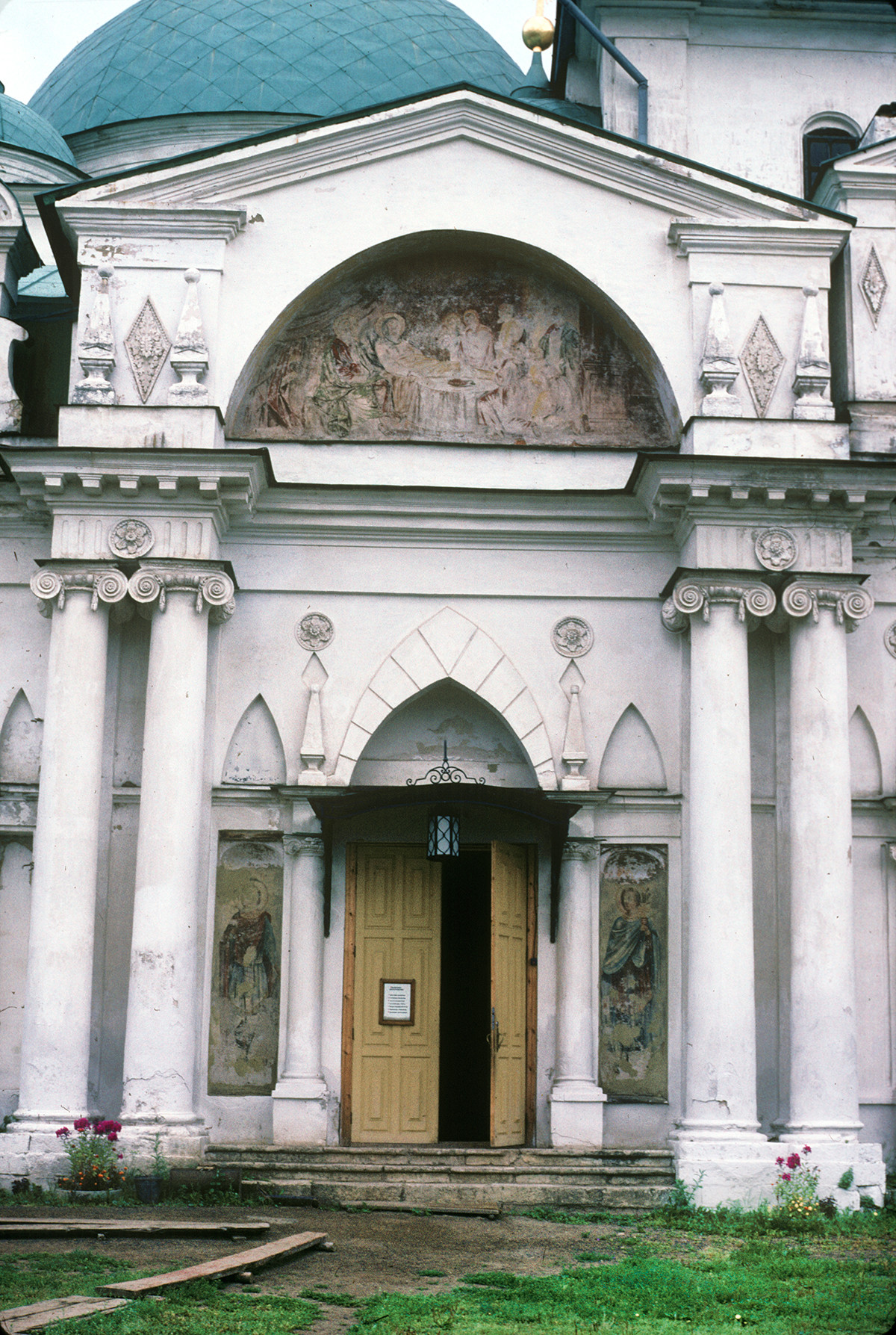 Church of St. Yakov. West view with main entrance. Painting of Nativity of the Virgin on tympanum of narthex pediment. August 5, 1995

The greatest homage to the prelate was the building in 1795-1801 of the grand neoclassical Church of St Dimitry, Metropolitan of Rostov. Support for this edifice was provided by Count Nicholas Sheremetyev (1751-1809), grandson of Field Marshal Boris Sheremetyev (1652-1719), Peter the Great’s leading army commander and a contemporary of Dimitry Tuptalo.

Nicholas Sheremetyev wished to raise an imposing shrine to contain the prelate’s relics. Church authorities, however, objected to the transfer on the grounds that Dimitry had emphatically stated his desire to be buried in the Conception Cathedral. 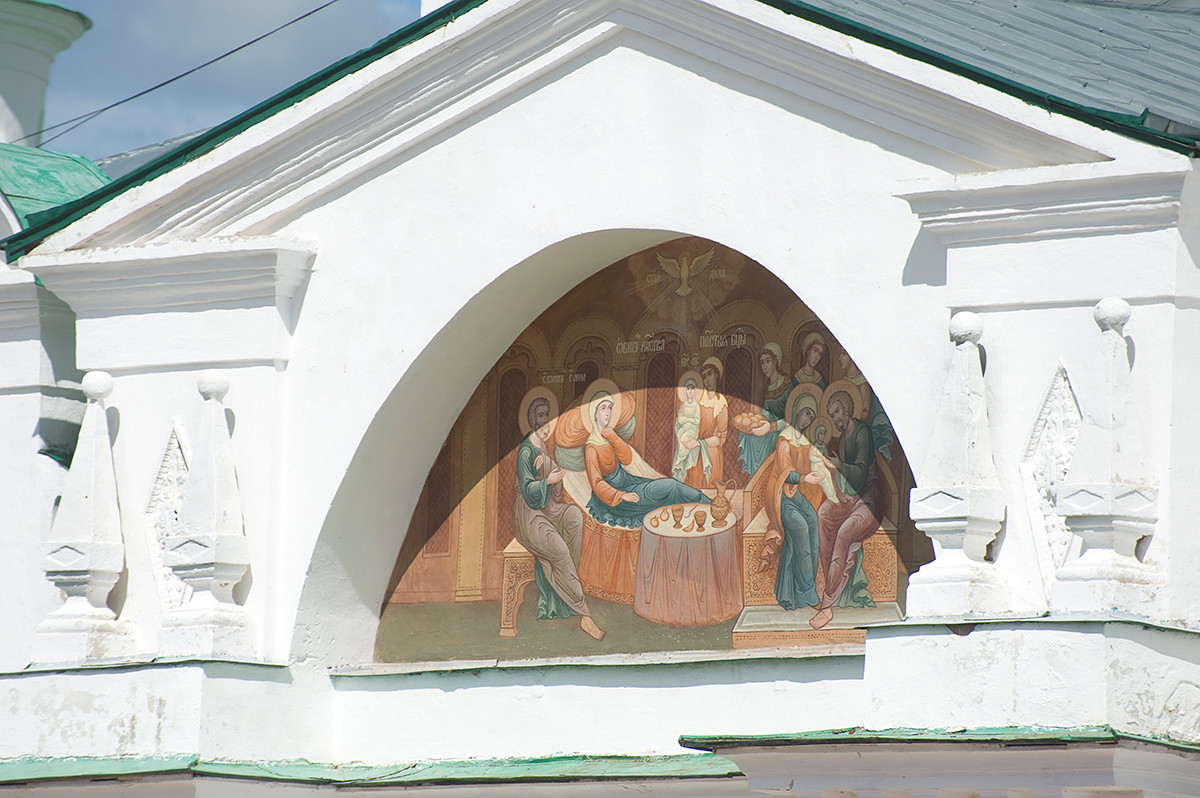 Church of St. Yakov. Restored painting of Nativity of the Virgin on tympanum of narthex pediment. July 7, 2019

Nonetheless, the Church {or Cathedral) of St. Dimitry was completed, and a century later, following the bicentennial of St. Dimitry’s death, an unusual arrangement arose: a second silver sarcophagus was made for the saint’s relics, which were transferred each summer from the Conception Cathedral to the St. Dimitry Cathedral. This second sarcophagus was also melted down for its silver in 1922.

In 1824 Abbot Inokennty ordering the razing of the modest Church of St. Yakov, attached to the north façade a century earlier. His plan for a more imposing structure was enabled by the astonishing sum of 75,000 rubles from Countess Anna Orlova-Chesmenskaya (1785-1848), the sole daughter of Count Alexis Orlov, one of Catherine the Great’s close associates. An enigmatic figure whose life and death were surrounded by legend and rumor, Orlova bequeathed most of her enormous wealth to the Orthodox Church. This project included the creation of a grand narthex (vestibule) in an eclectic style that linked both structures on the west façade. 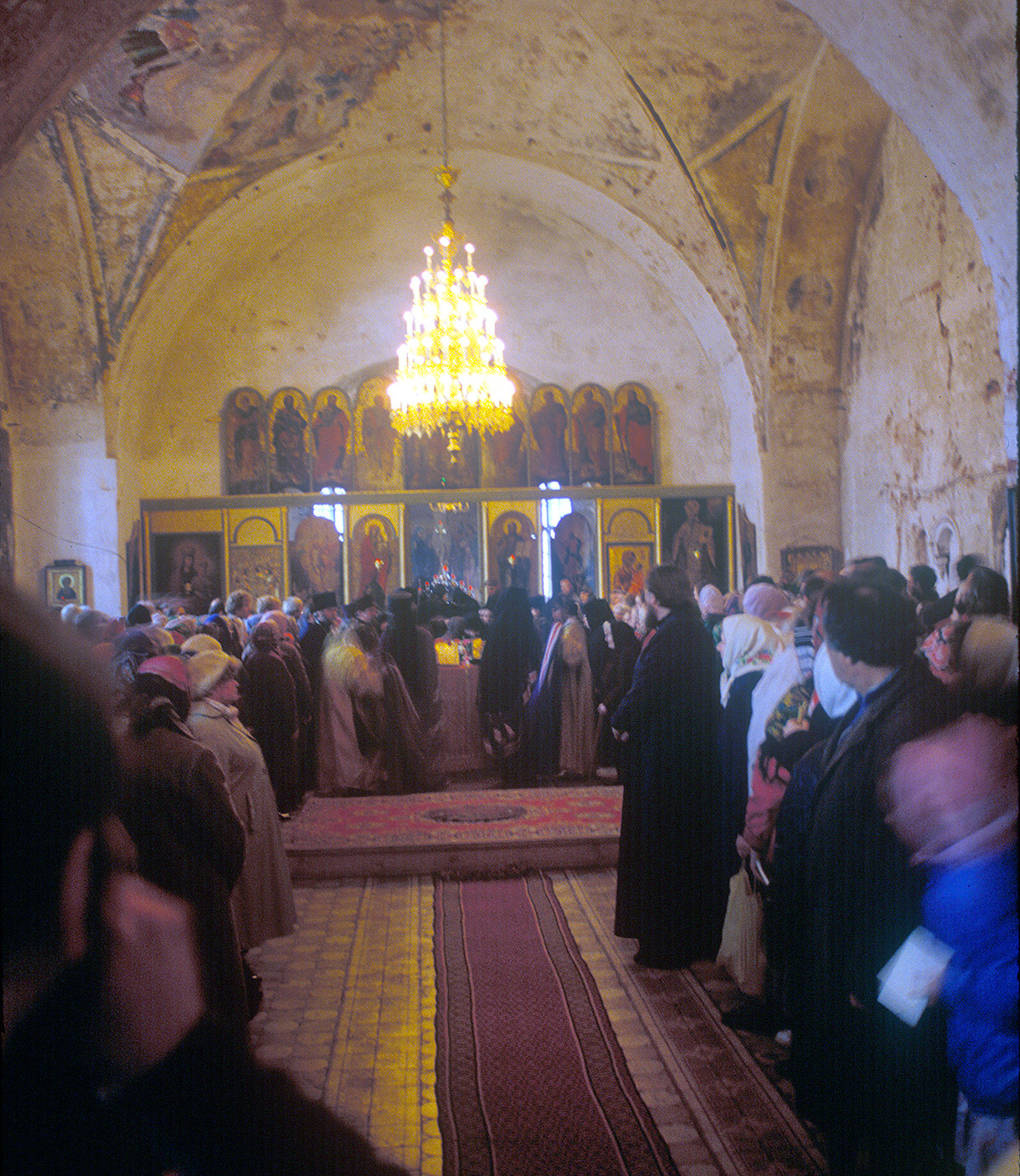 From the mid-19th century to the early 20th, the monastery was visited by every tsar except Alexander III, as well as numerous other members of the royal family. Its prosperity abruptly ended with the establishment of Soviet power. After the monastery’s closing in 1923, some of its artistic treasures were preserved by the Rostov Museum, but the monastery in general was ransacked and disfigured by haphazard conversion to other uses. The extent of the degradation is evident from my photographs early 1990s after the return of the monastery to the Orthodox Church in April 1991.

The monastery’s recent transformation has been dramatic, yet much restoration work remains for the artistic legacy of this historic center of Russia’s spiritual culture. 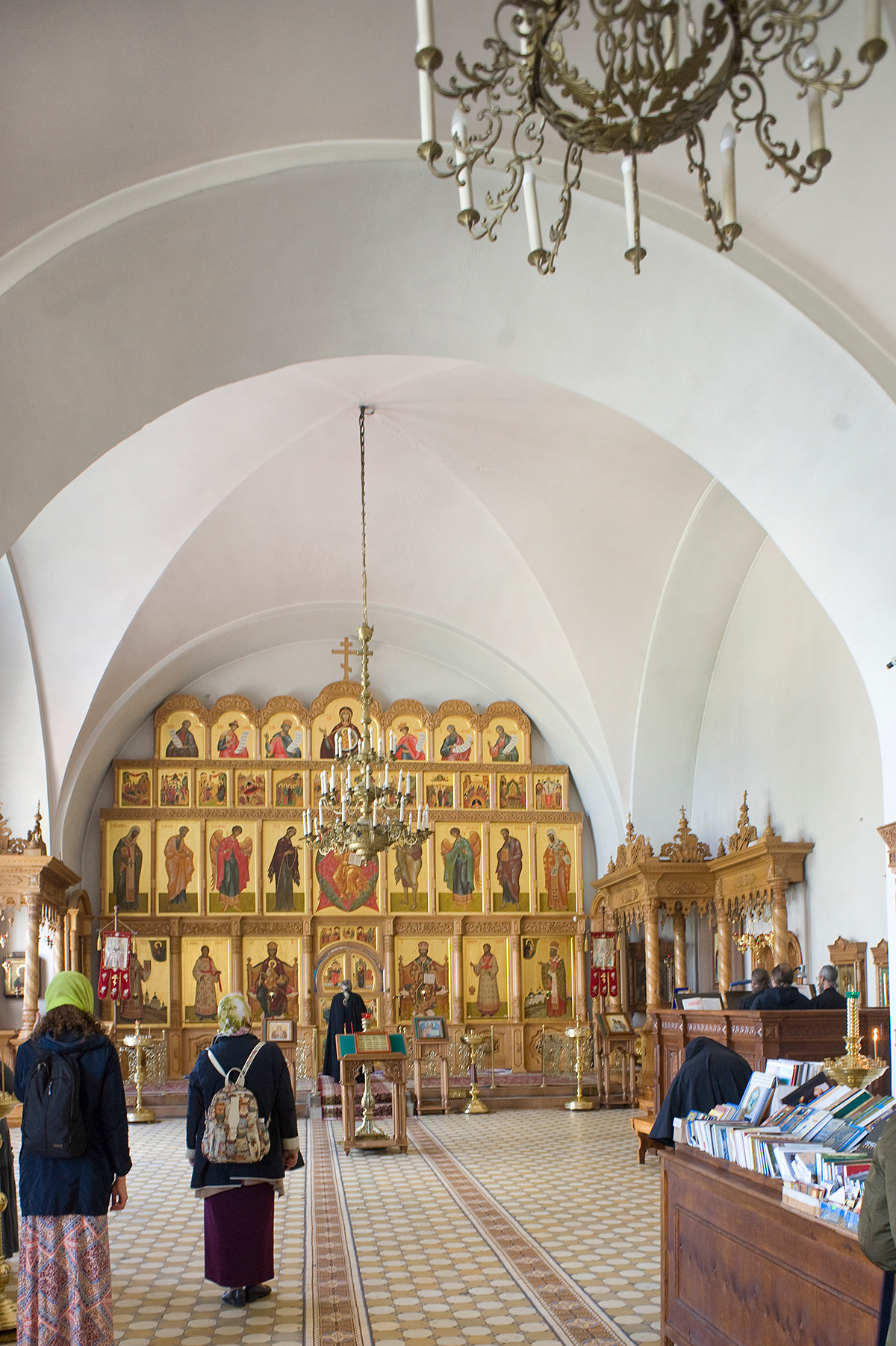