Regal splendor: The Monastery Cathedral of St. Dimitry in Rostov 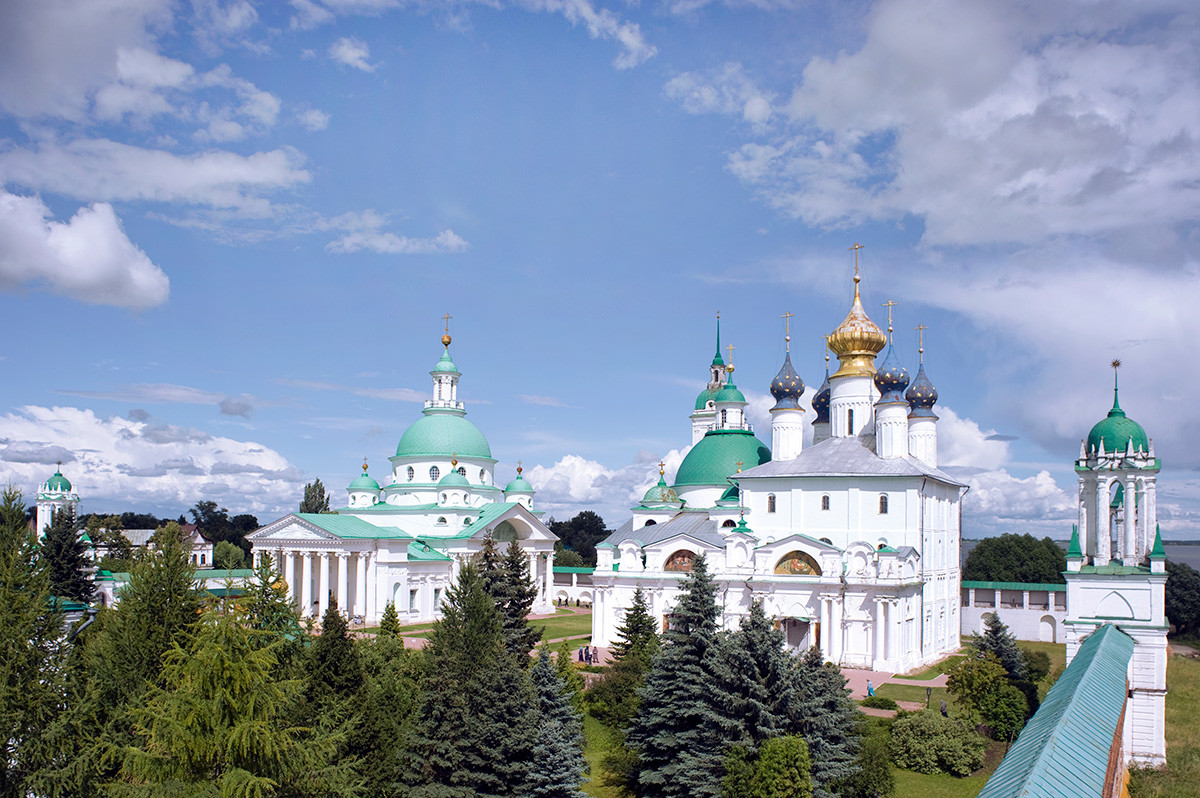 Located some 130 miles northeast of Moscow, the town of Rostov Veliky rises from the north shore of Lake Nero like a medieval vision. In summer 1911, the Russian chemist and photographer Sergei Prokudin-Gorsky traveled to the town to take images of its domes and towers.

Rostov is one of the earliest historically attested towns in Russia, first mentioned under the year 862 in the ancient chronicle "Tale of Bygone Years." In 988, Prince Vladimir of Kiev, the Christianizer of Russia, gave the Rostov lands to one of his sons, Yaroslav, a major figure who subsequently became known as "the Wise." 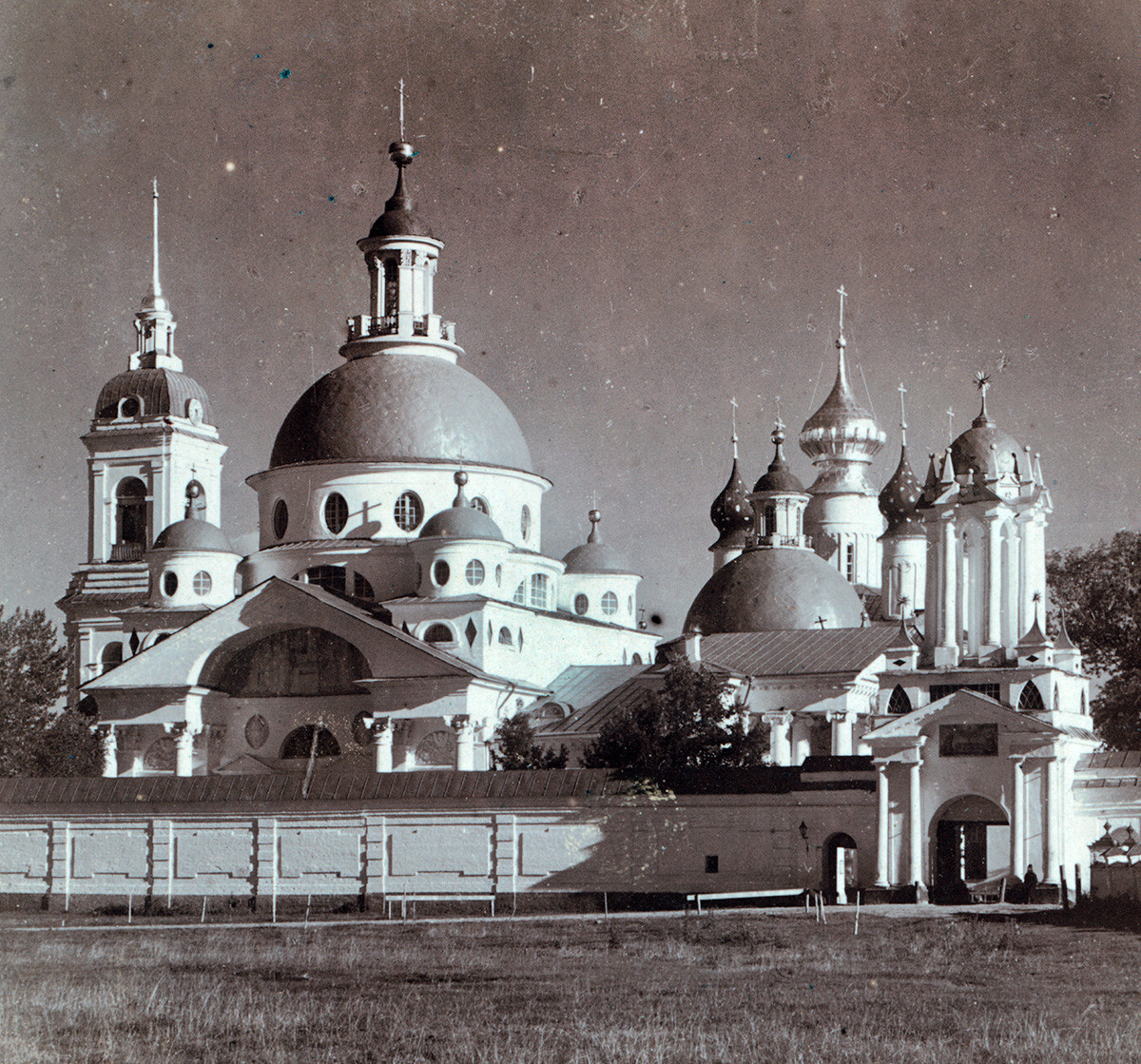 By the middle of the 11th century, the Rostov lands had passed to Yaroslav's son Vsevolod, and Christian missionaries such as Leonty of Rostov arrived to convert a largely pagan population. For his efforts, Bishop Leonty was martyred in the early 1070s.

Following the Mongol invasion (1237-40), during a period of widespread devastation, Rostov gained importance through its church institutions. By the 14th century, Rostov had become a center of religious learning and missionary activity, producing such pioneers as St. Stephan of Perm and Epiphanius the Wise. 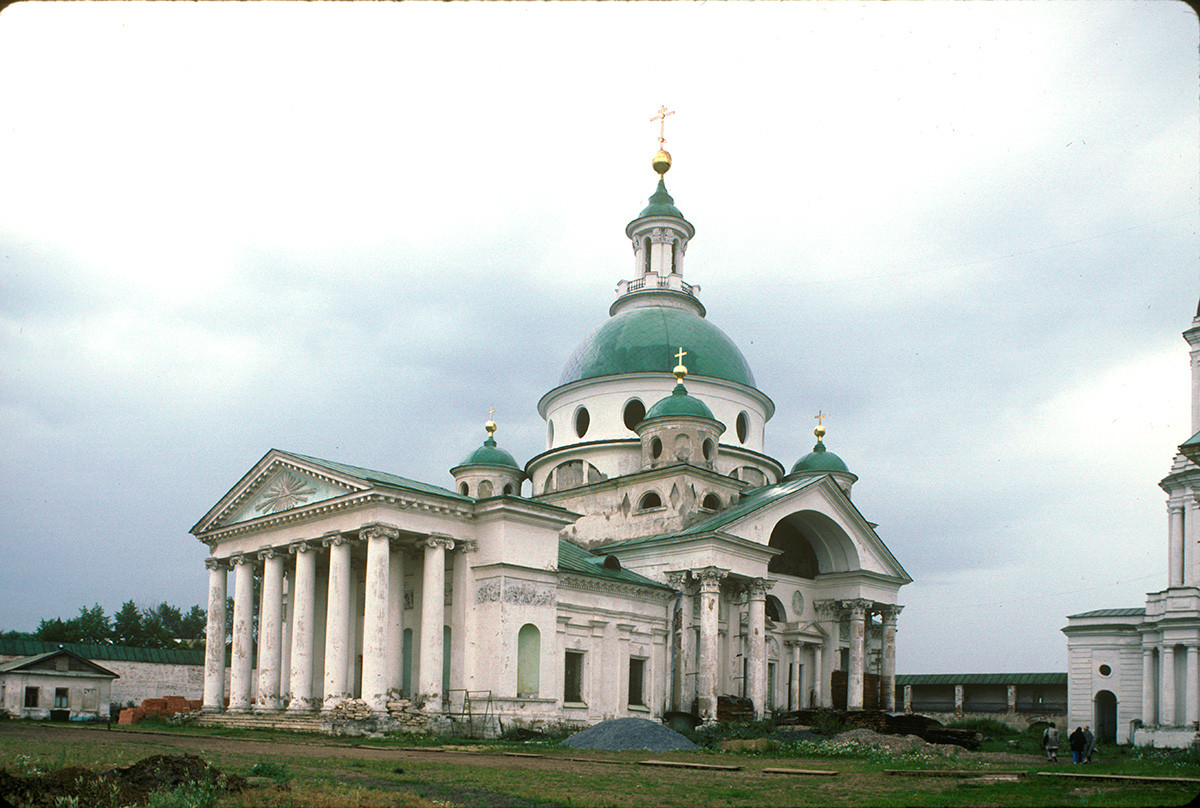 Perhaps the most revered site among those photographed in Rostov was the Savior-St. Yakov-St. Dimitry Monastery, located on Lake Nero at the western edge of town. Prokudin-Gorsky took several views of the monastery, including the grand church dedicated to St. Dimitry of Rostov. From the time of Catherine II (the Great), the monastery was visited by every emperor except Alexander III, as well as numerous other members of the royal family.

This monastic retreat was founded apparently in 1389 by one Yakov, a Rostov bishop about whom little is known. Traditional accounts state that he withdrew to a site on Lake Nero near the Archangel Michael Church, which was founded by Bishop Leonty in the mid-11th century. There he built a log church dedicated to the Conception of St. Anne. 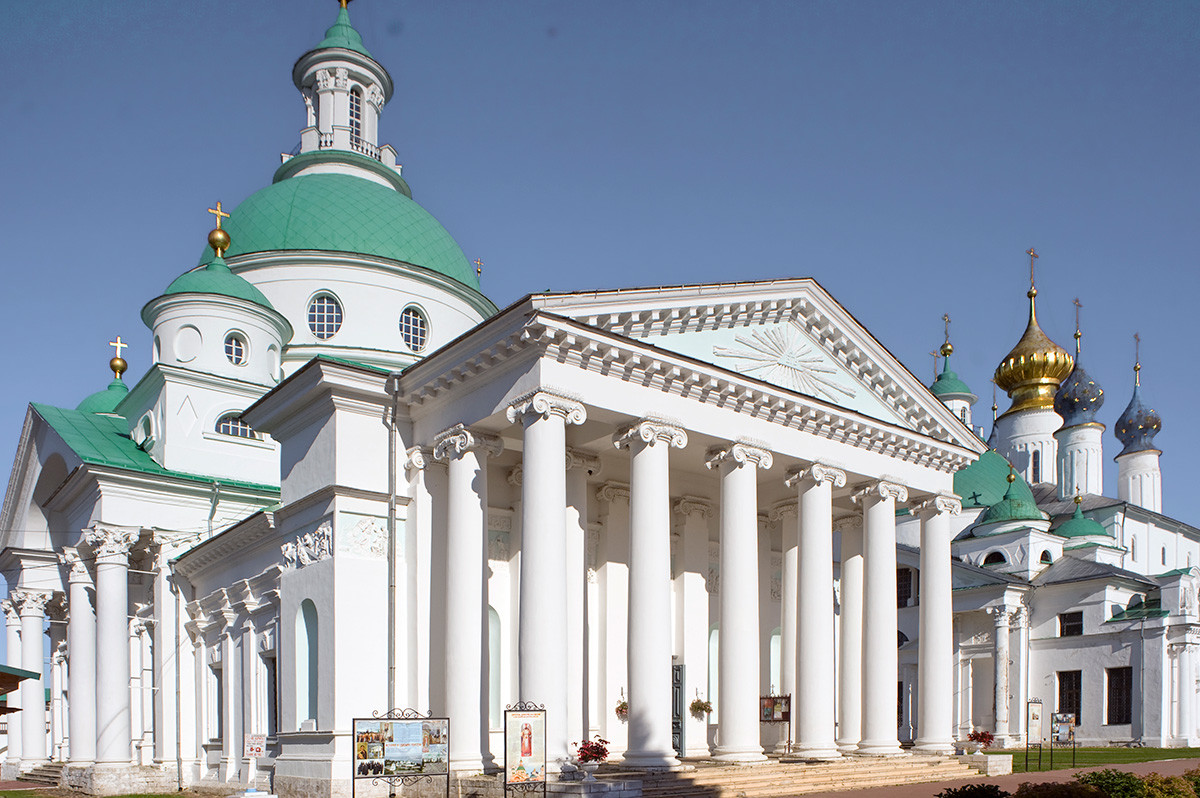 After Yakov’s death in November 1392, his venerated remains were buried at the Conception Church. In the late 1540s, he was canonized at the Orthodox Church convocations organized by Moscow’s Metropolitan Macarius to recognize Russian saints.

During the first centuries of its existence, the monastery was known as Conception- St. Yakov. Its earliest masonry structure, the Cathedral of the Conception of St. Anne (originally Trinity Cathedral), arose in 1686 on the site of the wooden Conception Church where St. Yakov was buried.

During the 18th century, the monastery experienced unprecedented expansion beginning with the arrival in 1702 of Metropolitan Dimitry Tuptalo (1651-1709), a Ukrainian prelate designated by Tsar Peter I (the Great) to the position of Metropolitan of Rostov. Indeed, Dimitry became one of the most prominent church prelates during Peter’s reign. His burial in the Trinity (Conception) Cathedral in 1709 laid the foundation for the monastery’s elevation. 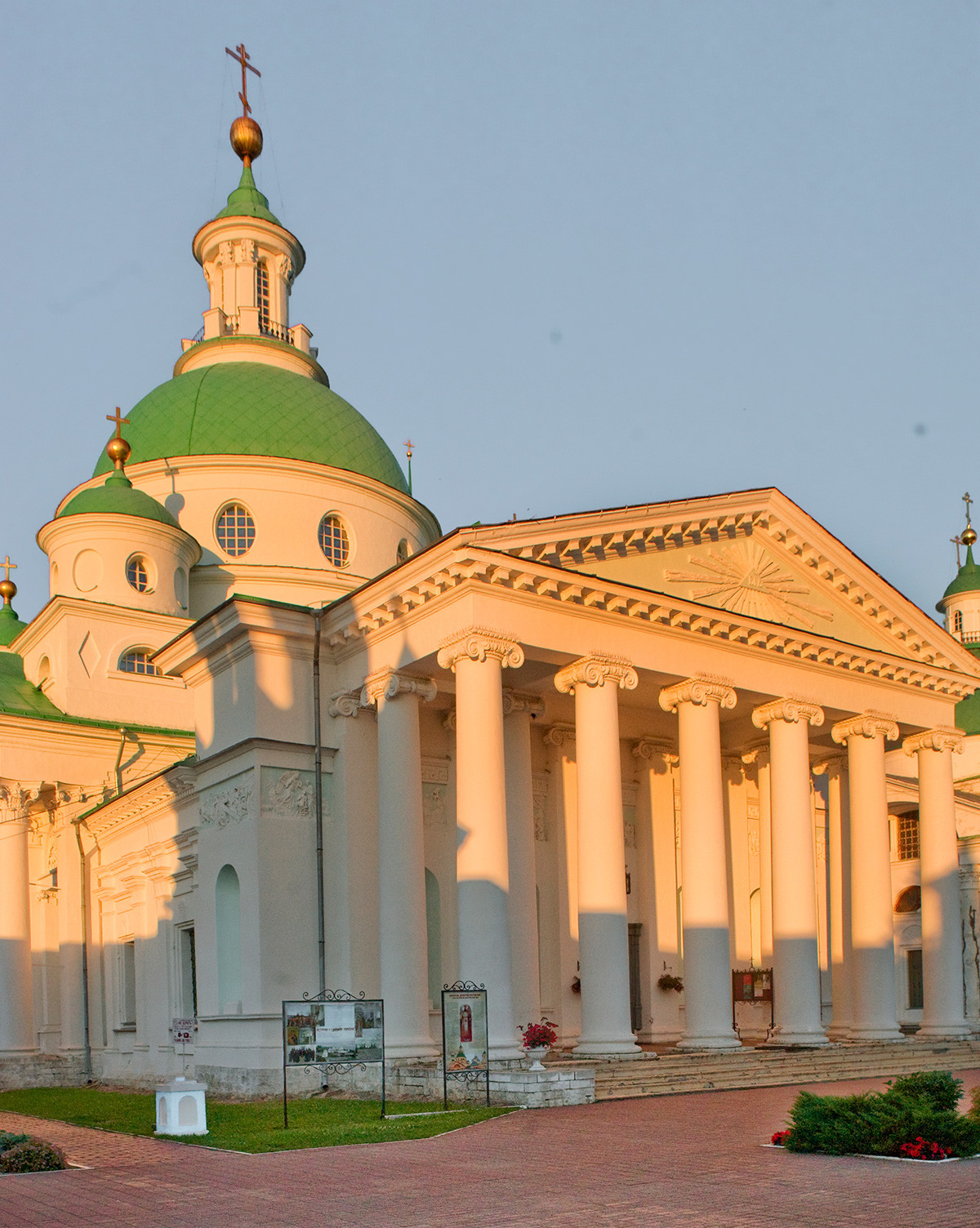 Dimitry’s remains were uncovered during a repair of the Trinity Cathedral floor in 1752. Two years later, the cathedral was rededicated to the Conception of St. Anne in honor of the original monastic shrine.

With the canonization of Dimitry of Rostov in 1757, Empress Elizabeth (daughter of Peter the Great) made lavish donations, including a silver sarcophagus to hold the saint’s relics in the Conception Cathedral. This remarkable object was melted down by the Bolsheviks in 1922. 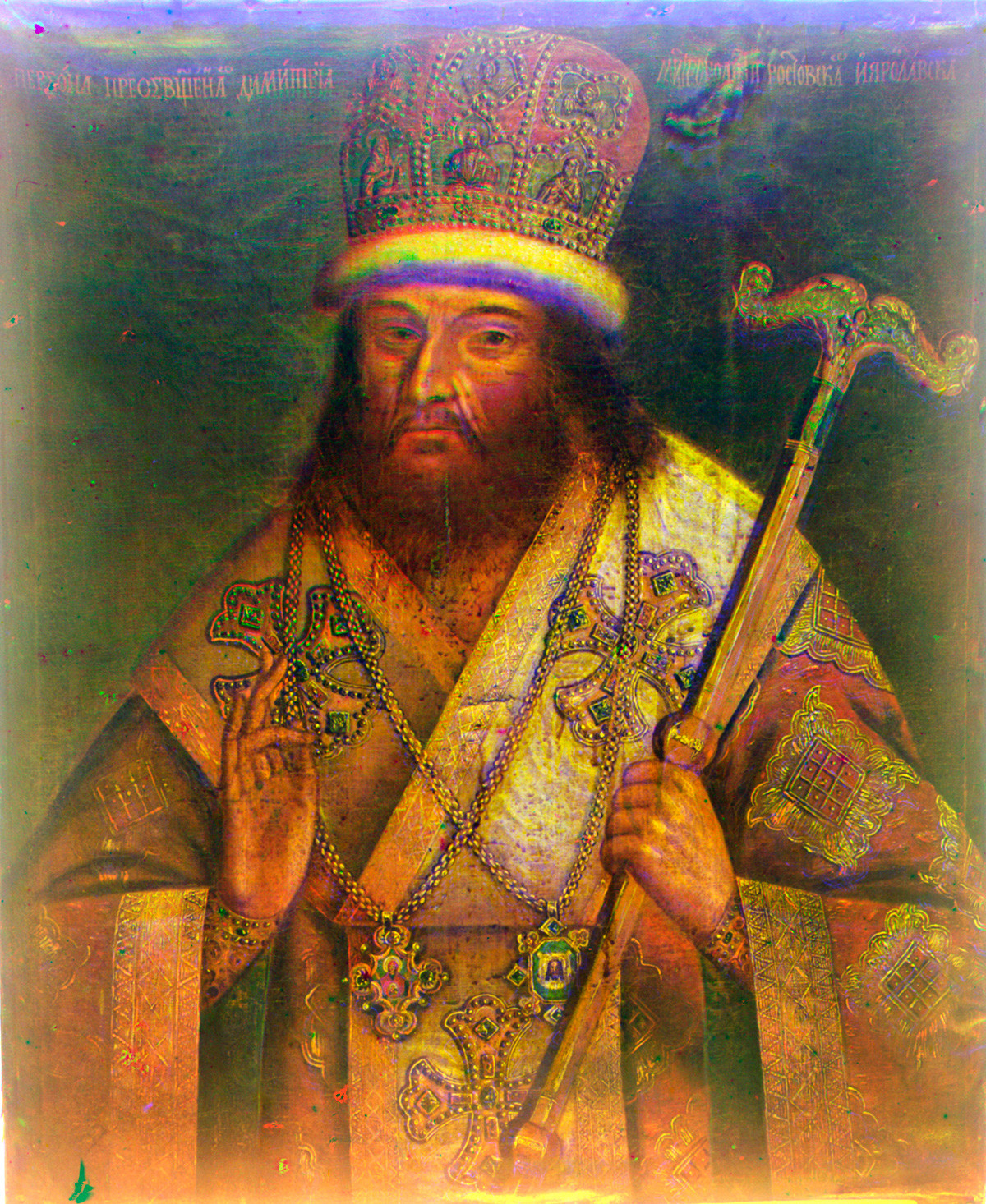 The monastery’s prestige was greatly enhanced by Catherine the Great, who chose the monastery for the first pilgrimage of her reign. Her visit, in late May 1763 for the solemn transfer of Dimitry’s relics to the silver sarcophagus, proved to be an event of major symbolic importance for the new empress’s consolidation of power.

The following year the monastery was elevated in status and supervised directly by the Holy Synod, the main governing body of the Russian Orthodox Church from 1721 to 1917. This assured it of major financial support at a time when many monasteries were being closed by Catherine’s reform of the monastic system. 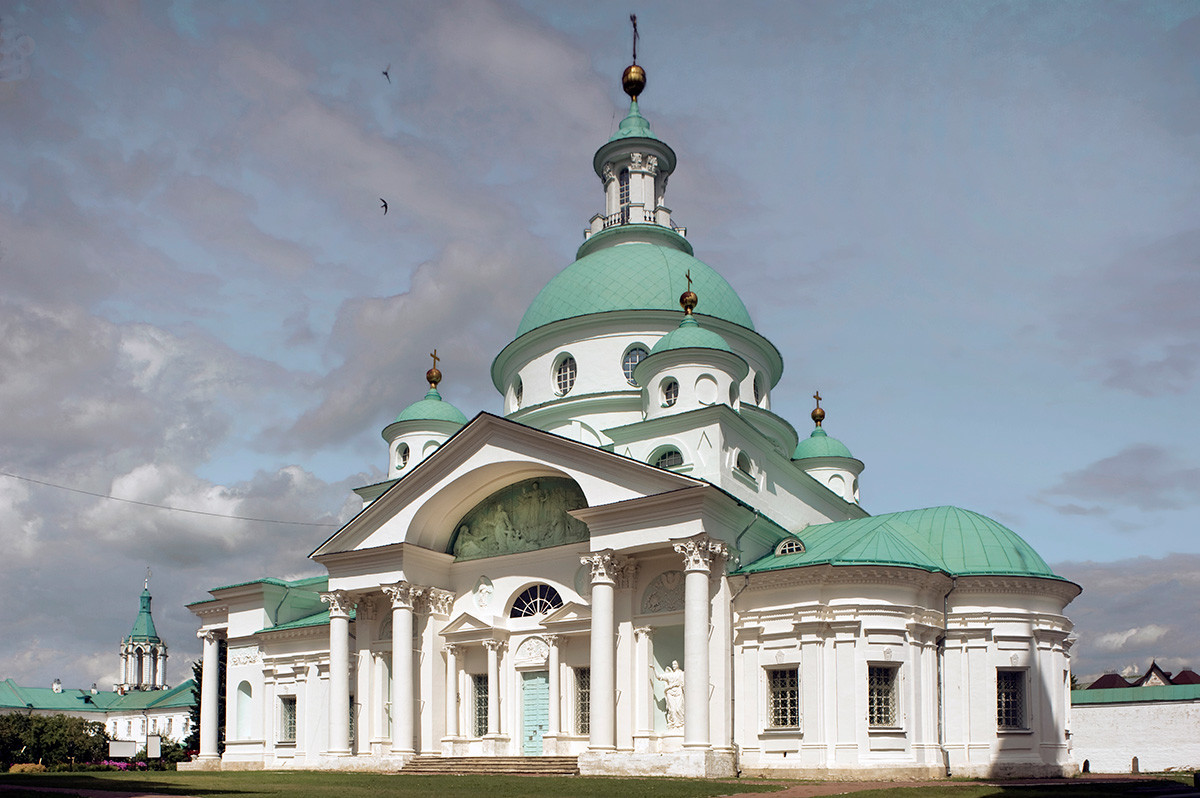 The greatest homage to the prelate was the building in 1795-1801 of the grand neoclassical Church of St. Dimitry, Metropolitan of Rostov. This magisterial structure, usually referred to as a cathedral, was photographed by Prokudin-Gorsky on its interior as well as exterior. 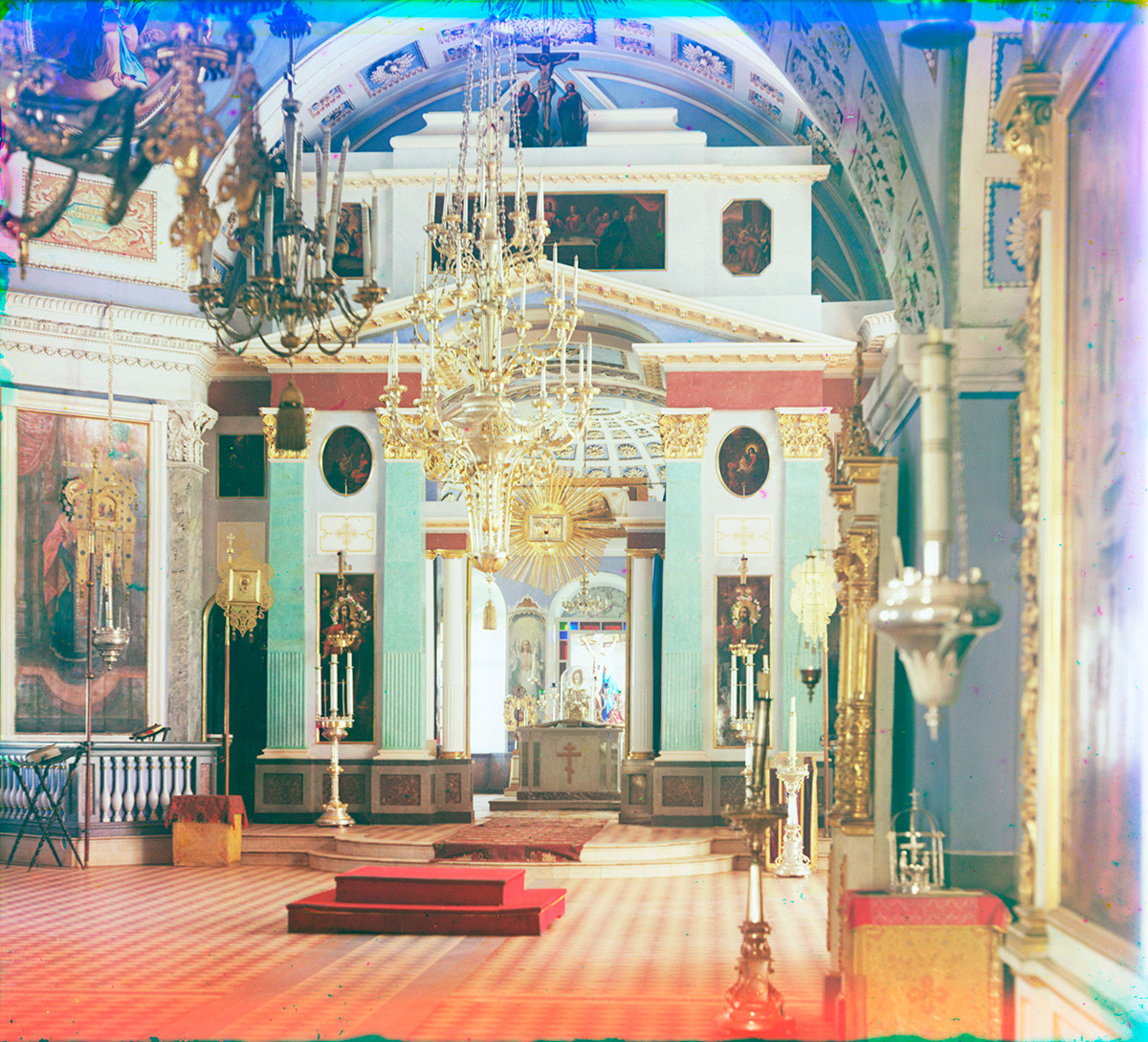 Support for this edifice was provided by Count Nicholas Sheremetyev (1751-1809), the grandson of Field Marshal Boris Sheremetyev (1652-1719), Peter the Great’s leading army commander. A close contemporary of Dimitry Tuptalo, Boris Sheremetyev was granted estates in the Rostov region, thus furthering his association with Metropolitan Dimitry.

Successive generations of Sheremetyevs maintained ties with the monastery, yet none did as much as Nicholas Sheremetyev, who intended to raise a great shrine to contain the saintly prelate’s relics. Although church authorities objected to the transfer on the grounds that Dimitry had stated his desire to be buried in the Conception Cathedral, the structure of the St. Dimitry shrine was completed in 1801. 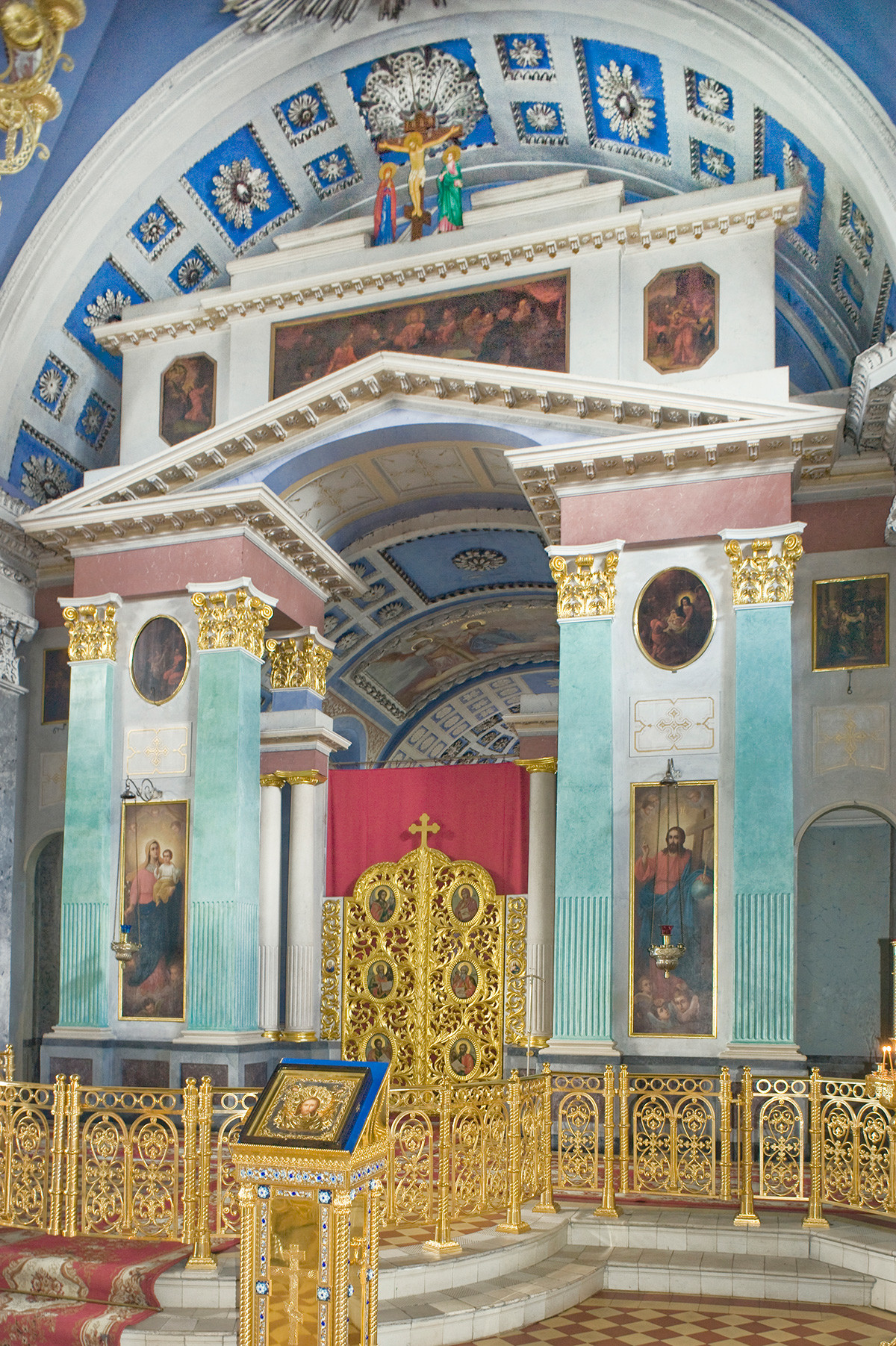 The imposing late neoclassical exterior is attributed to the architect Elizvoy Nazarov, a former serf who did much work for the Sheremetyevs. A large central dome crowns the main block, which is adorned on the north and south facades with extended pediments resting on paired Corinthian columns. The space beneath the pediments contains stucco reliefs and statues within niches.

Extending from the west side is a massive refectory (vestibule) framed by a portico with six Ionic columns. This extension contains secondary altars dedicated to St. Nicholas (patron saint of Nicholas Sheremetyev) and St. Demetrius of Thessaloniki, patron of St. Dimitry of Rostov. 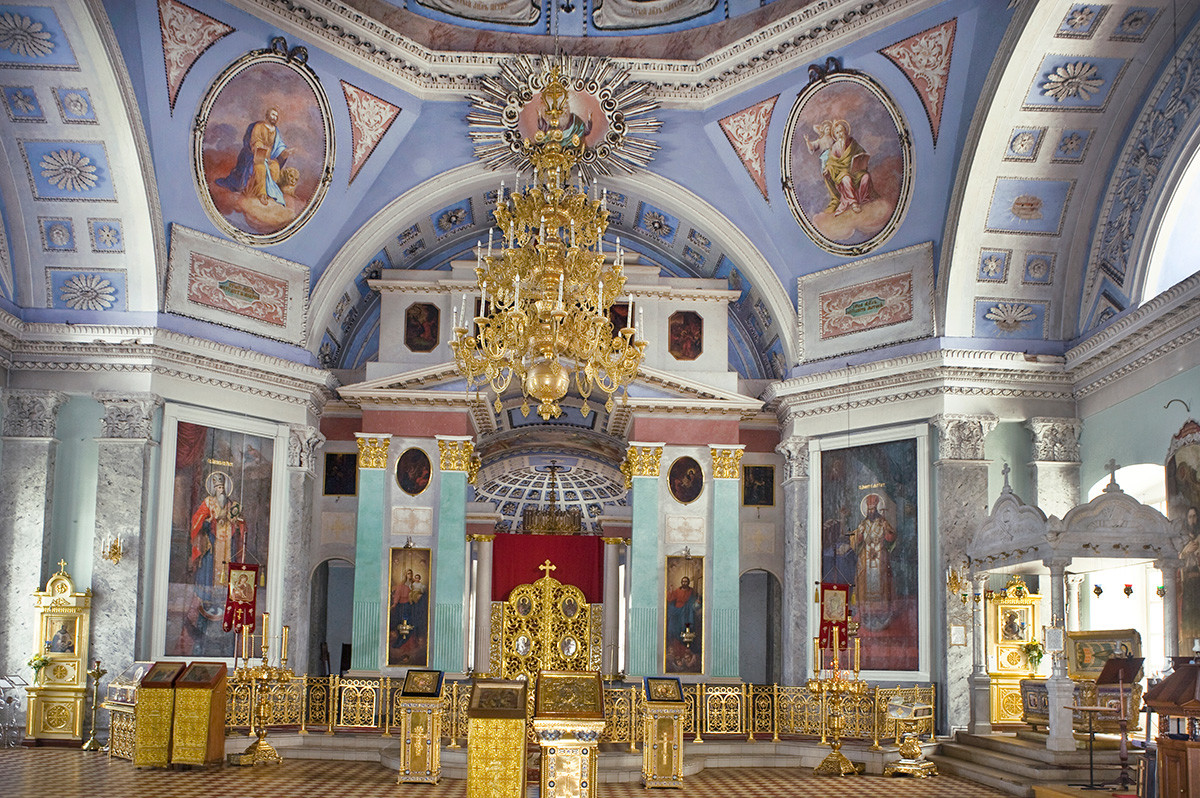 Although his original glass negative has not survived, Prokudin-Gorsky’s contact print shows the St. Dimitry Cathedral rising above the monastic ensemble at the north wall and the Holy Gate. My photographs show the cathedral from various perspectives within the monastery. 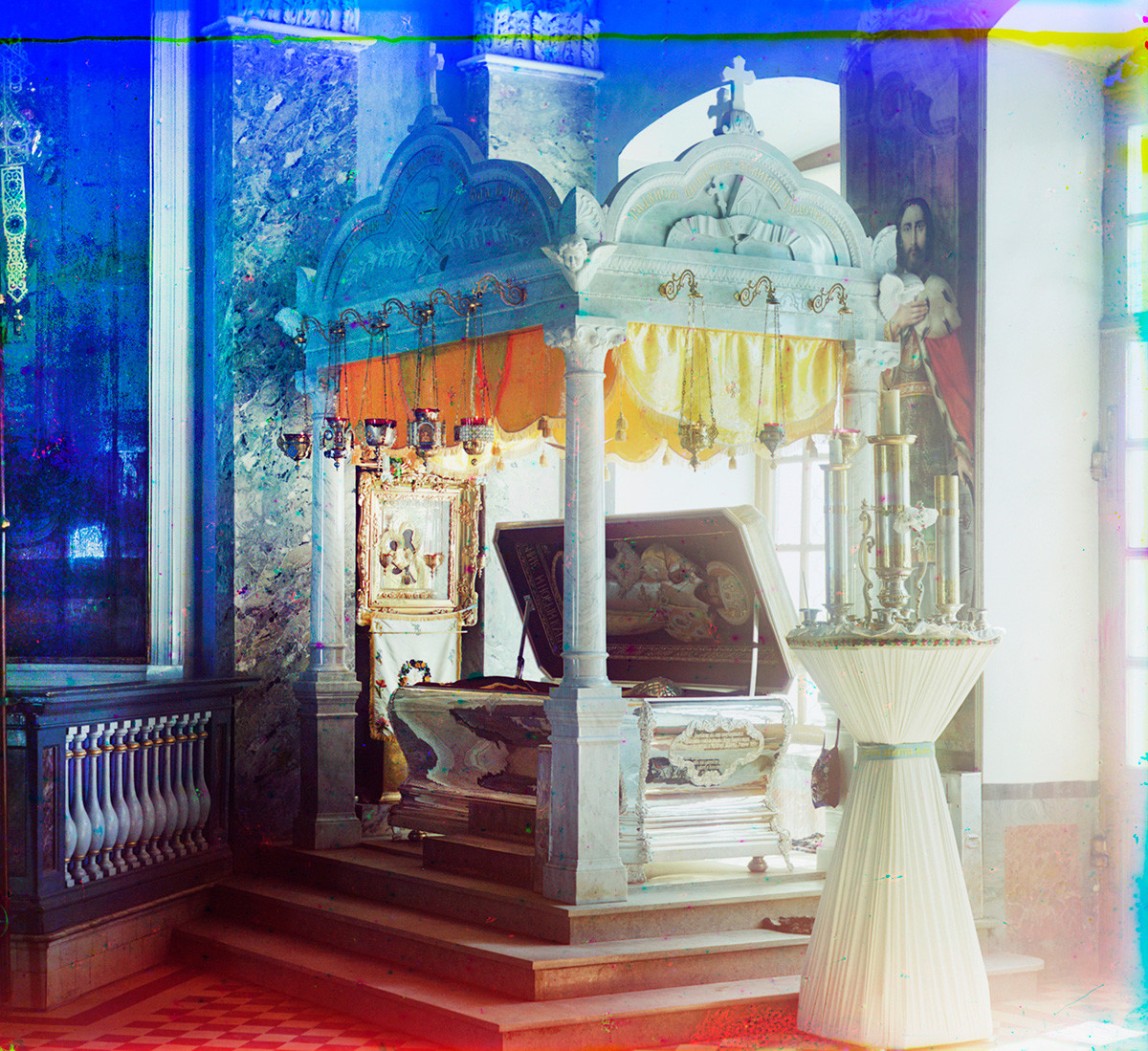 A second view shows a marble baldachin that contained a second silver sarcophagus made in 1910 following the bicentennial of St. Dimitry’s death. At that point, his relics were transferred during each summer from the Conception Cathedral to the St. Dimitry shrine, which Prokudin-Gorsky photographed in 1911. This second sarcophagus was also melted down for its silver in 1922. 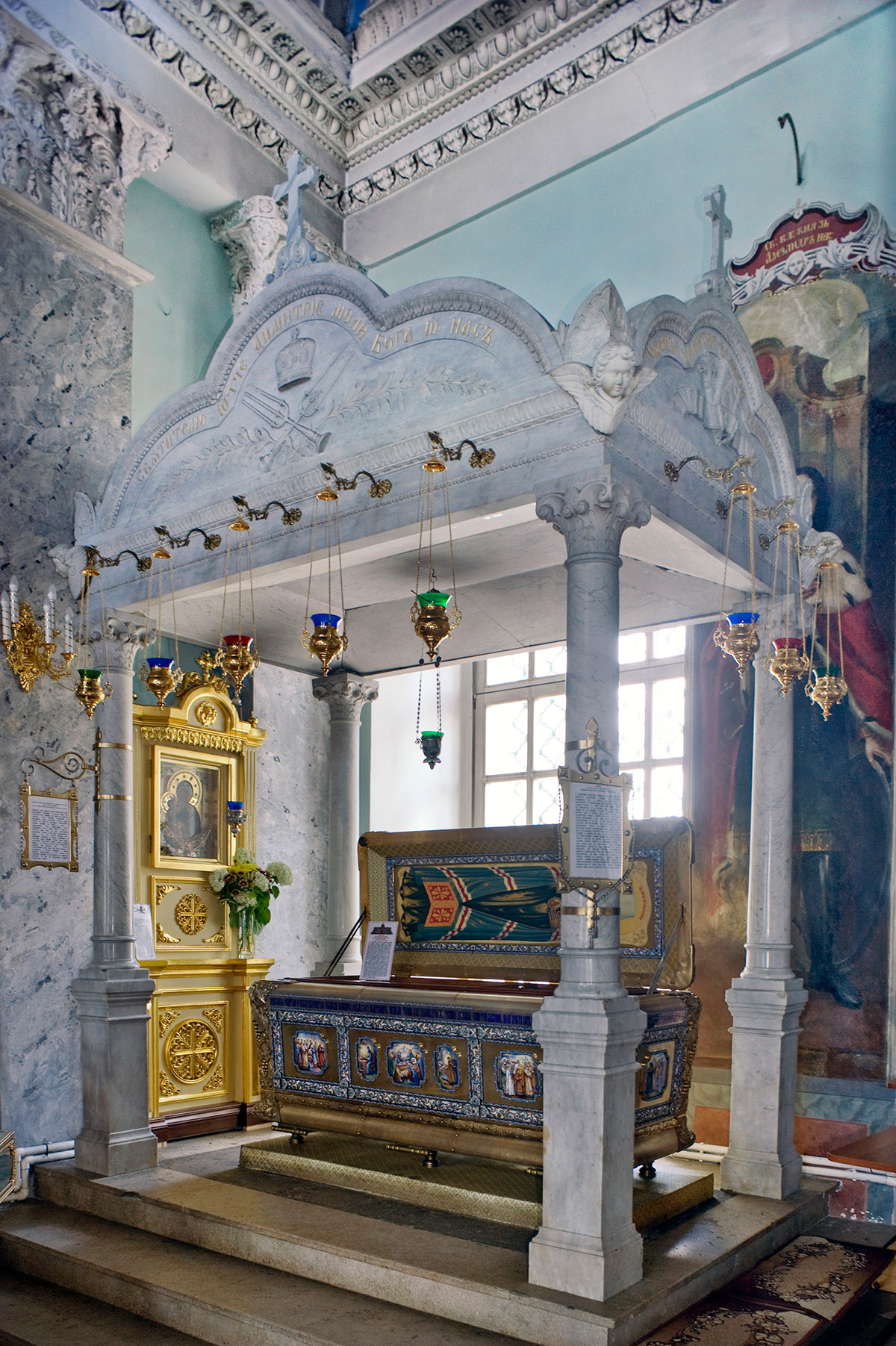 The monastery’s prosperity came to an end with the establishment of Soviet power. After its closure as a religious institution in 1923, some monastery treasures were preserved by the Rostov Museum, but the monastery in general was ransacked and then disfigured by haphazard conversion to other uses. The extent of the degradation is evident from my photographs taken in the early 1990s soon after the return of the monastery to the Orthodox Church in April 1991. 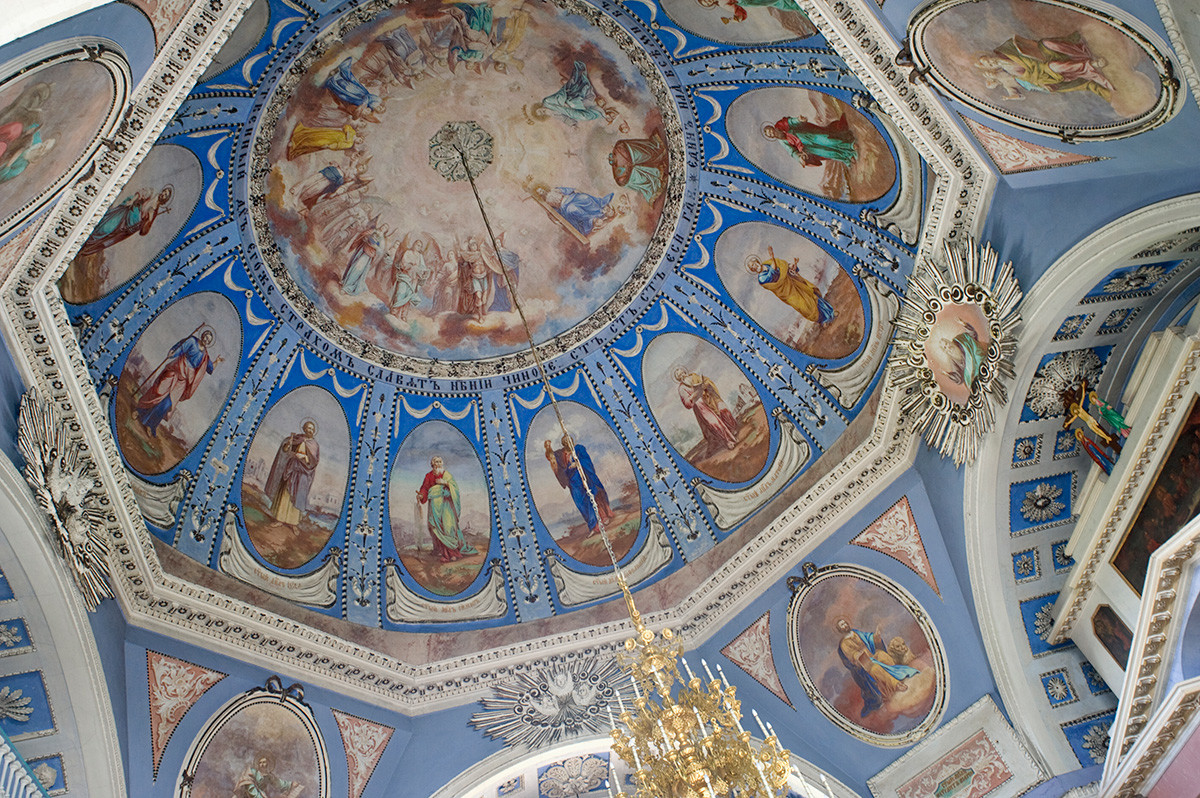 In 2009, during the tercentenary of St. Dimitry’s death, the restored Cathedral of St. Dimitry was re-consecrated by Patriach Kirill. For this occasion, a third silver sarcophagus was made to contain the saint’s relics throughout the year. Ongoing restoration efforts have returned the monastery dedicated to St. Dimitry to a position as one of the most illustrious in central Russia.

In the early 20th century the Russian photographer Sergei Prokudin-Gorsky developed a complex process for color photography. Between 1903 and 1916 he traveled through the Russian Empire and took over 2,000 photographs with the new process, which involved three exposures on a glass plate. In August 1918 he left Russia with a large part of his collection of glass negatives and ultimately resettled in France. After his death in Paris in 1944, his heirs sold his collection to the Library of Congress. In the early 21st century the Library digitized the Prokudin-Gorsky Collection and made it freely available to the global public. A number of Russian websites now have versions of the collection. In 1986 the architectural historian and photographer William Brumfield organized the first exhibit of Prokudin-Gorsky photographs at the Library of Congress. Over a period of work in Russia beginning in 1970, Brumfield has photographed most of the sites visited by Prokudin-Gorsky. This series of articles will juxtapose Prokudin-Gorsky’s views of architectural monuments with photographs taken by Brumfield decades later.