The extraordinary revival of the Convent of St. Theodore in Pereslavl-Zalessky 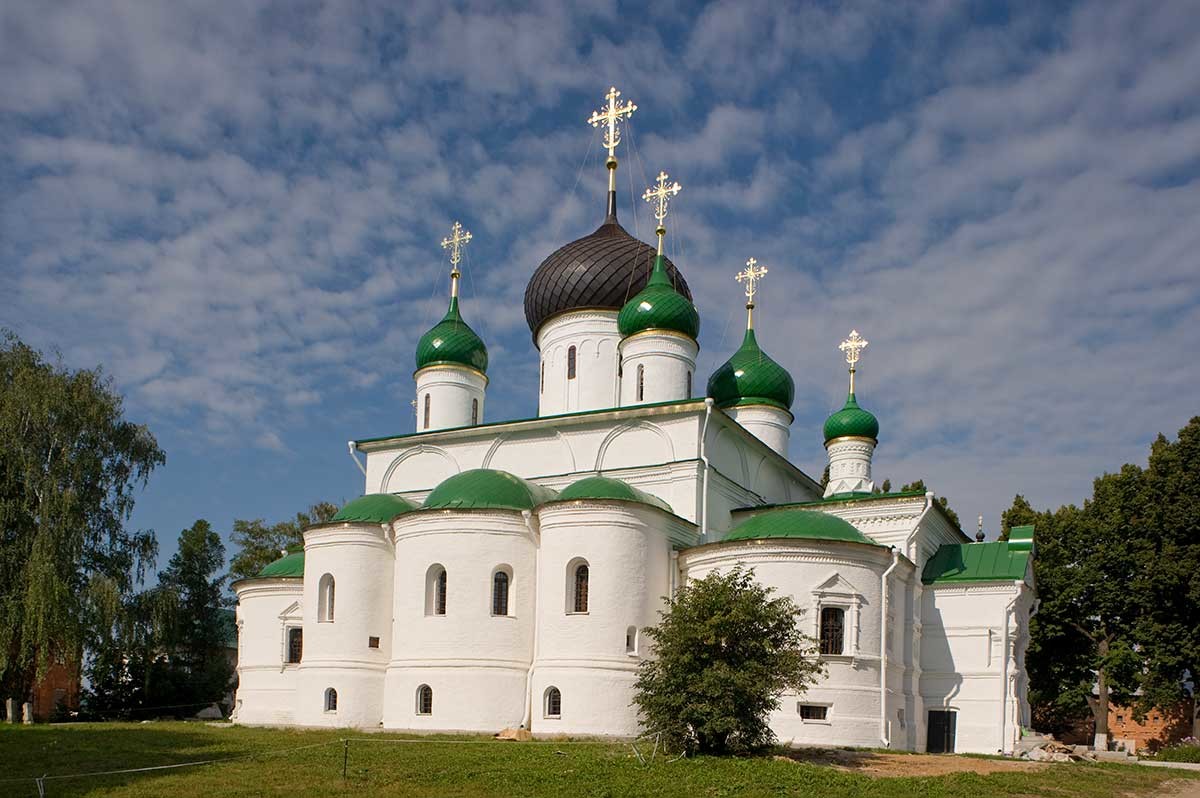 At the beginning of the 20th century, Russian chemist and photographer Sergei Prokudin-Gorsky developed a complex process for color photography. Inspired to use this new method to record the diversity of the Russian Empire, he undertook numerous journeys over a period from 1903 to 1916.

His vision of photography as a form of education and enlightenment was demonstrated through his photographs of architecture in historic towns northeast of Moscow that form the heart of the Golden Ring. Prominent among them is Pereslavl-Zalessky (current population 40,000), which Prokudin-Gorsky visited in 1911. My documentation of the town extends from 1980 to 2019. 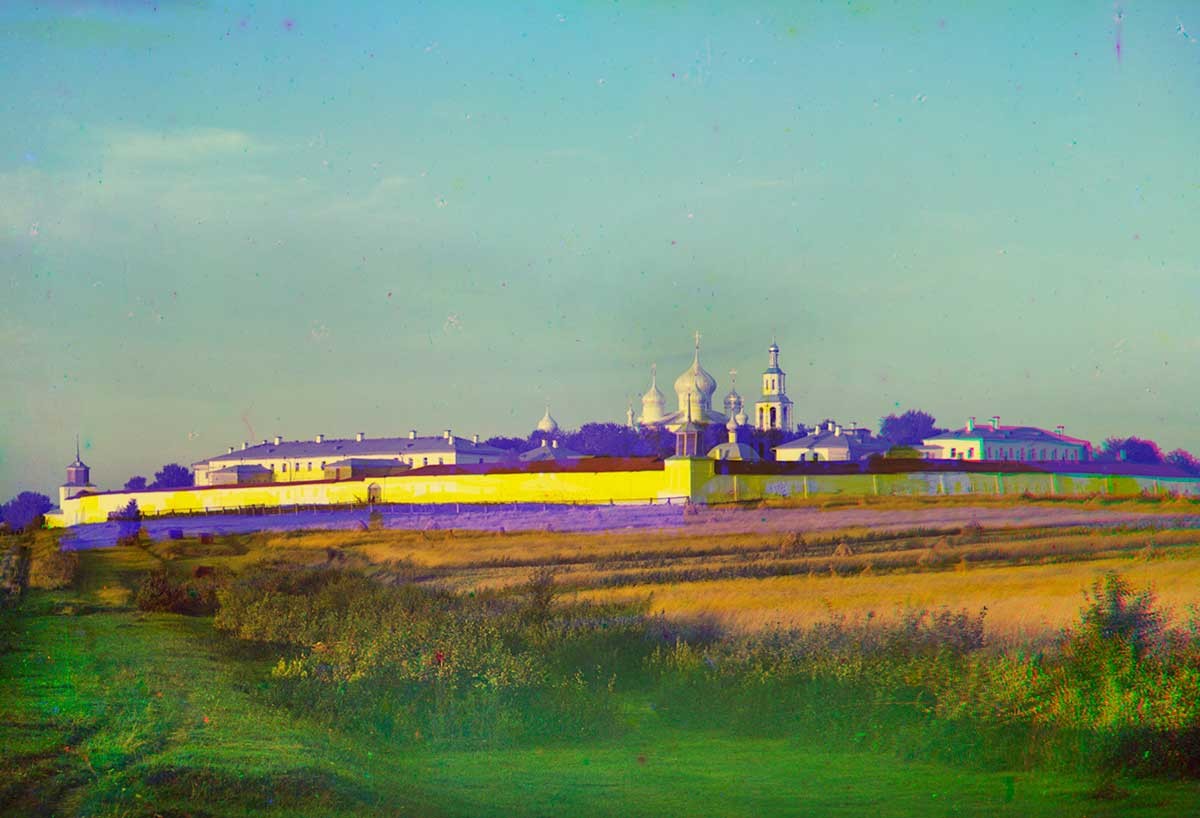 By official account, the town was founded in 1152 by Prince Yury Dolgoruky, who is also considered the founder of Moscow (in 1147). Settlers from the medieval capital of Kiev had moved to the area since the turn of the 12th century, and the town’s name is thought to have been derived from the town of Pereyaslavl, near Kiev. The addition of ‘Zalessky’ (eng. “beyond the forests”) suggests the new settlement lay within a fertile zone of fields and forests in north-central Russia. 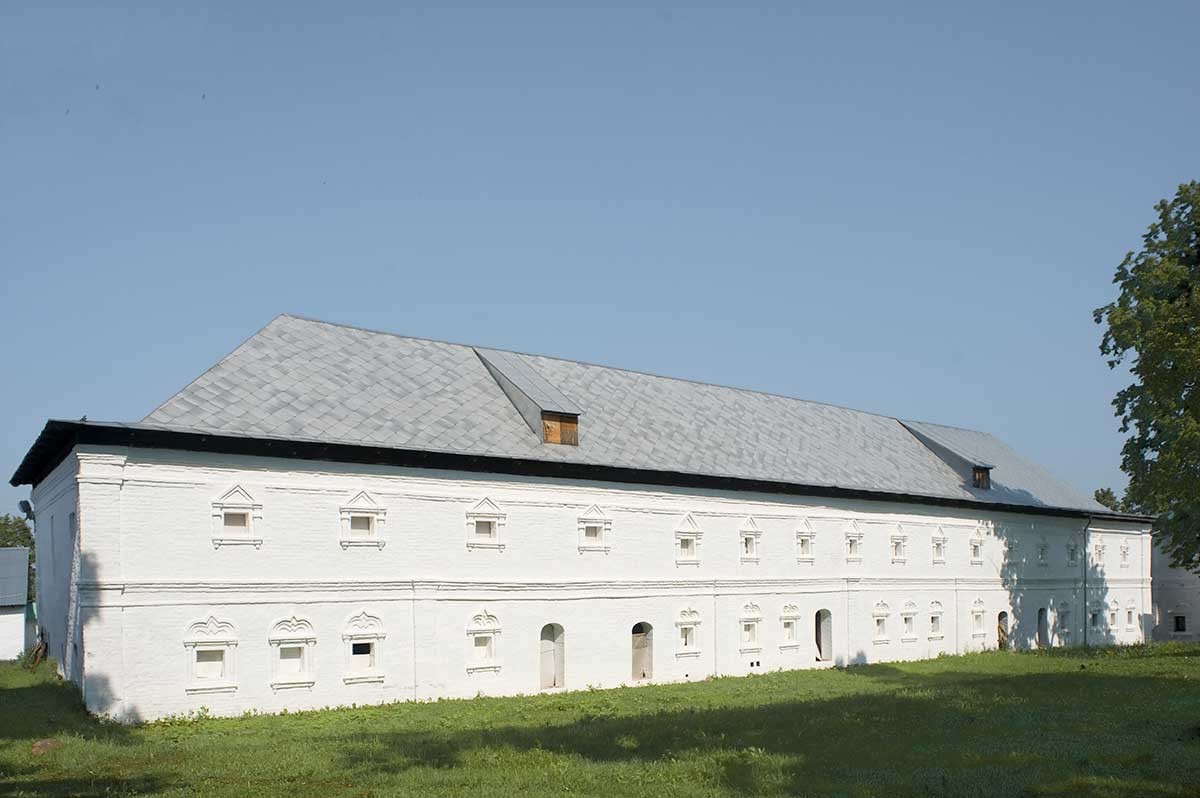 Of the town’s several monastic institutions, Prokudin-Gorsky devoted much attention to the Feodorovsky Monastery, situated at the southwest edge of town near Moscow Road and converted into a convent in the mid-17th century. Tradition has it that the Feodorovsky Monastery stands on the field of a fierce battle between Moscow and Tver, whose rivalry is one of the defining struggles in Russian history, during the two centuries following the Mongol invasion of 1237-41.

At the turn of the 14th century, Pereslavl-Zalessky’s strategic position on the north flank of the Muscovite principality drew the hostile attention of the Tver principality. As a result, a battle ensued near Pereslavl, during which the forces of Prince Yury Danilovich of Moscow defeated the hosts of Tver's​ Prince Mikhail Yaroslavich (1271-1318) on June 8, 1304.

In honor of a Roman soldier

In the Orthodox Church calendar this day is consecrated to St. Theodore (Feodor in Russian) Stratelates, a Roman officer martyred for his Christian faith in 319 and considered the patron saint of warriors. In gratitude for his victory over Tver, Prince Yury established a monastery and dedicated it to St. Theodore. 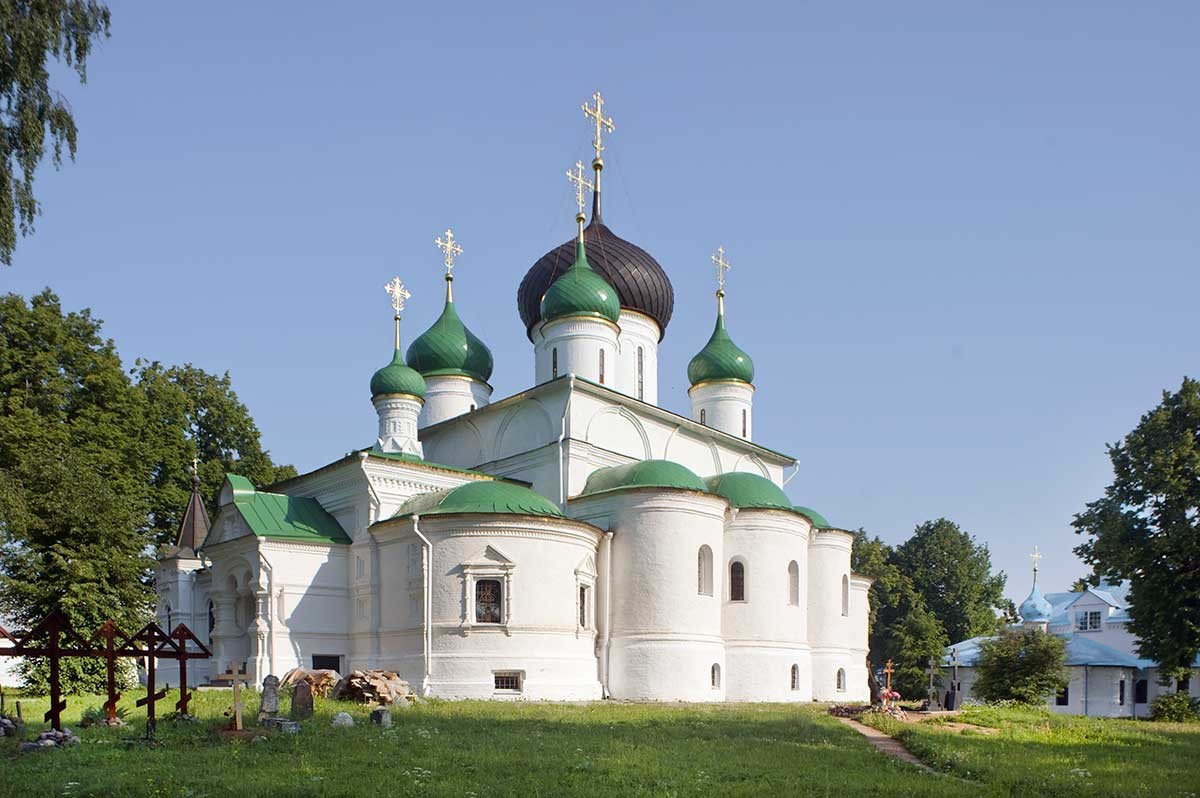 It should be added that some 14 years later, Prince Mikhail of Tver was killed at Moscow’s order by the all-powerful Khan Uzbek of the Mongol Golden Horde. Prince Mikhail was canonized as a martyr by the Church in 1547.

Until the 16th century, there is ​scant information about the Feodorovsky Monastery. It was probably ransacked, along with the rest of the town, by Mongol (Tatar) Khan Tokhtamysh, during his invasion of Russia in 1382.

In the mid-16th century, Ivan the Terrible — a frequent benefactor to Pereslavl-Zalessky — gave support to the monastery for the construction of a large brick church, dedicated to St. Theodore.

This central monastic structure was, in effect, a votive offering in celebration of the birth of Ivan’s second son, Feodor, in 1557. Traditional accounts state that Ivan’s wife, Anastasia Romanova, gave birth to Feodor near the monastery at a site that would be commemorated by a brick chapel (which Prokudin-Gorsky also photographed). With Feodor’s death in 1598, the first Russian dynasty, the Ryurikovich, came to an end. 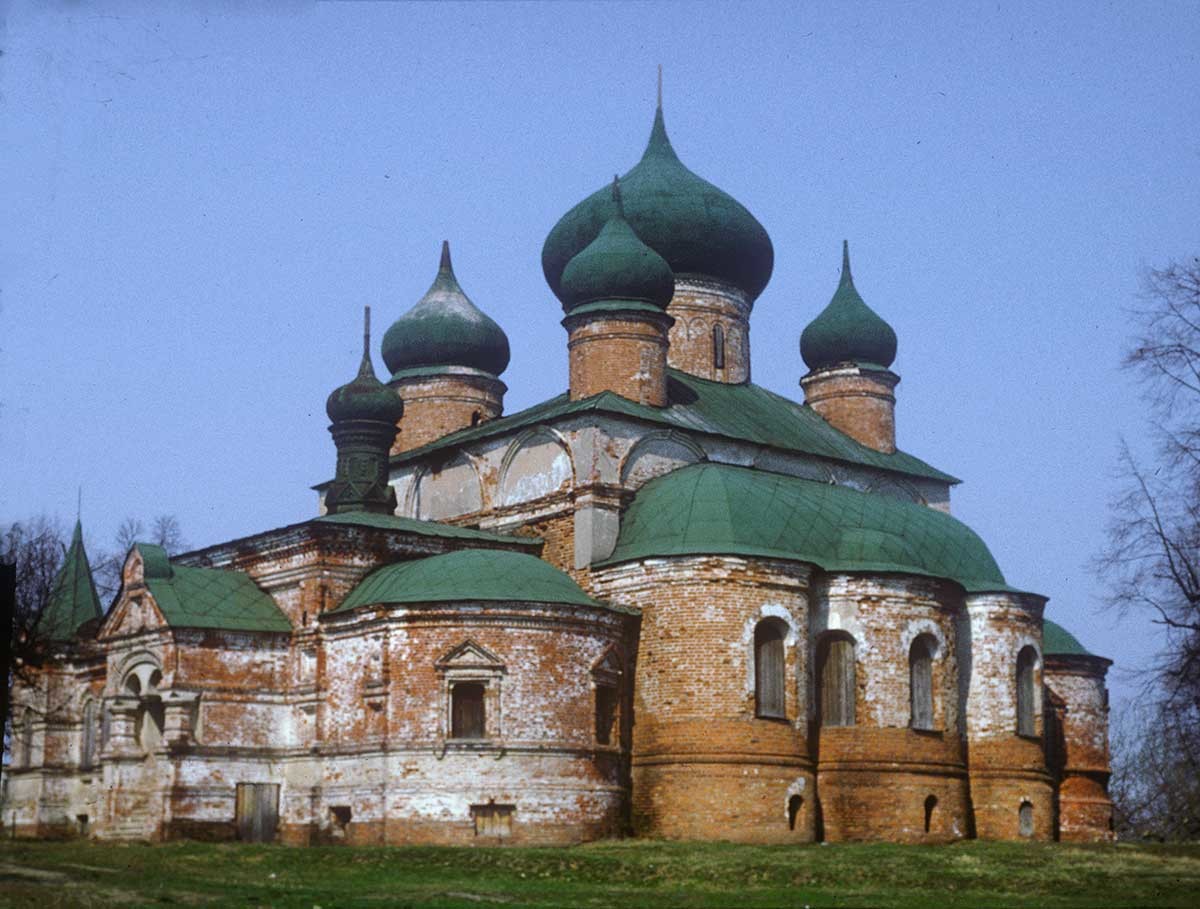 Although lacking the extravagant form of St. Basil’s on Red Square, the Cathedral of St. Theodore Stratelates is a landmark in the consolidation of 16th-century Muscovite church architecture. Its massive brick structure rises to five cupolas in a form enshrined at the turn of the 16th century.

The façades are divided into three bays, each of which culminates in a semicircular gable, known as a zakomara. The east side consists of an apse divided into three parts with the main altar in the center. The west side has a narthex, subsequently converted to a gallery range. 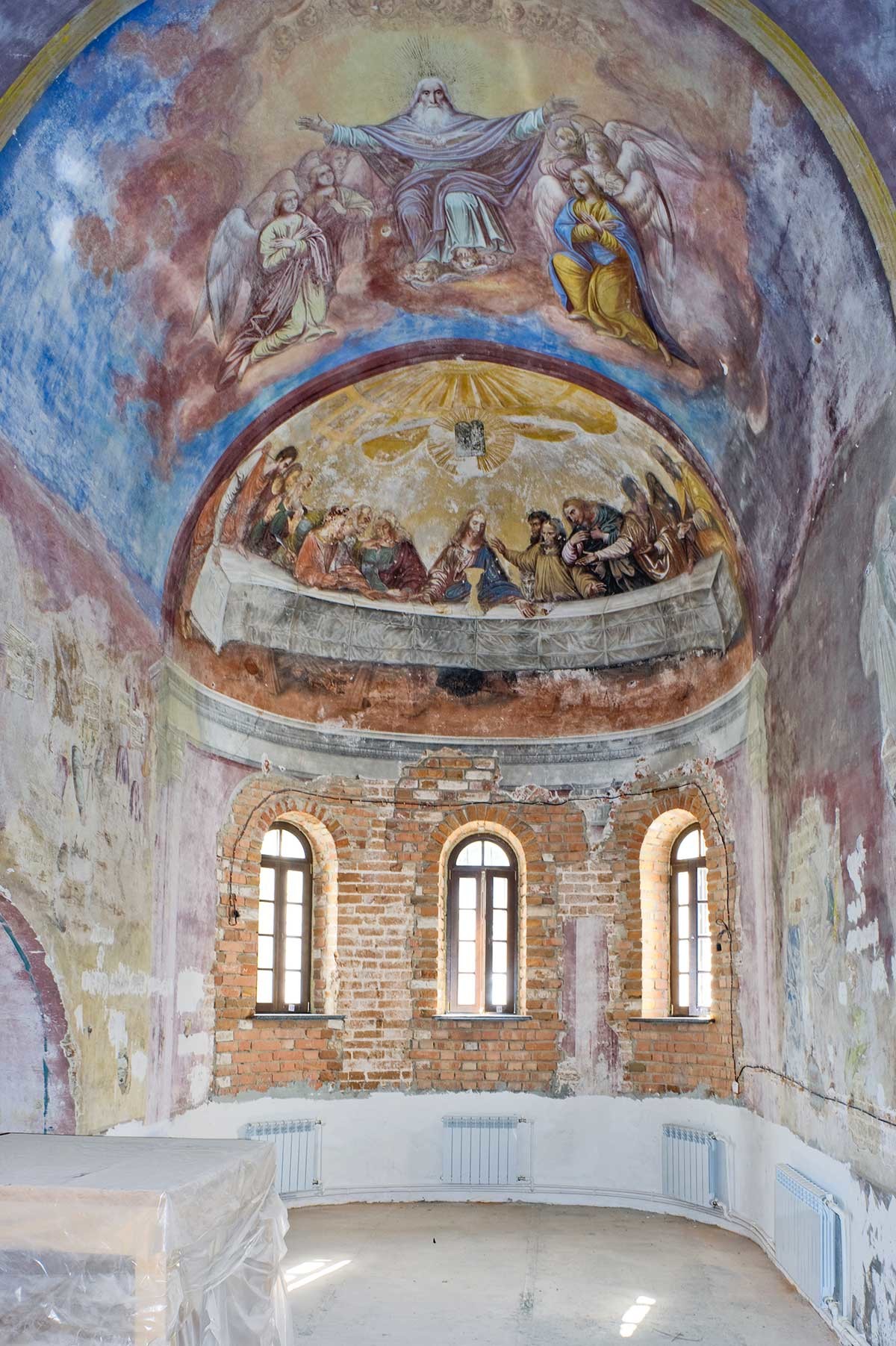 Over the centuries, the cathedral was modified numerous times. To facilitate maintenance, t​he curved zakomara gables were capped in 1800 with a 4-sloped metal roof that is dimly visible in Prokudin-Gorsky’s northwest view of the monastic ensemble.

During cathedral renovations in the 1880s, chapels were attached to the north and south. They contain secondary altars dedicated to the St. Theodore Icon of the Virgin and, after 1903, St. Seraphim of Sarov. 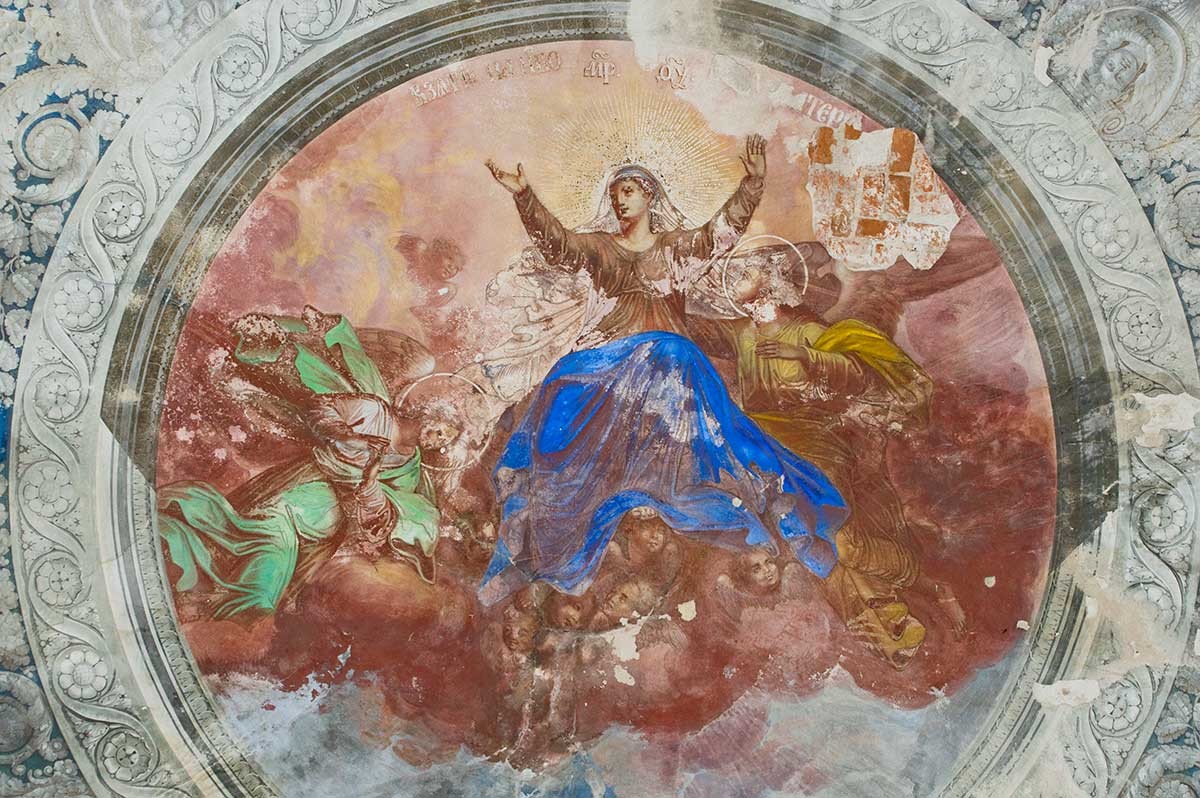 The cathedral interior was painted in the late 16th and 17th centuries, but the frescoes were damaged by fires. A repainting of the interior in the first half of the 19th century was subject to severe damage during the Soviet period. Nonetheless, large fragments survived, as my photographs show.

Transition from monastery to convent 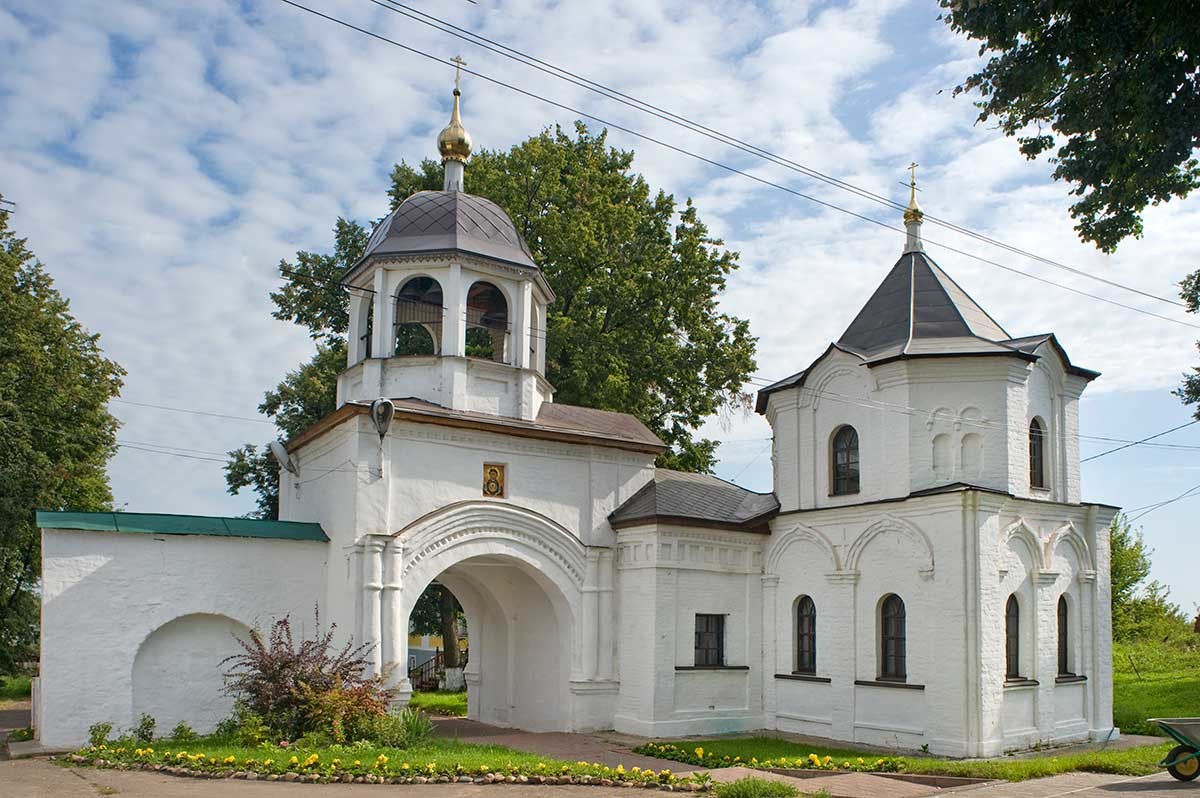 When and why did the Feodorovsky Monastery become a convent? In 1608, the town and its monasteries were again ransacked by Polish-Lithuanian forces, during a dynastic interregnum known as the Time of Troubles. Decades were required to recover from the widespread destruction, and by the middle of the 17th century, the monastery was faced with a dwindling number of monks.

After an outbreak of plague in the area during the early 1660s, the town was left with many women and young girls, whose only possible source of support was the church. Lack of space in existing convents and the acute destitute needled to a decision by Patriarch Joseph — supported by Tsar Aleksey Mikhailovich — to convert the largely empty monastery to a convent in 1667. 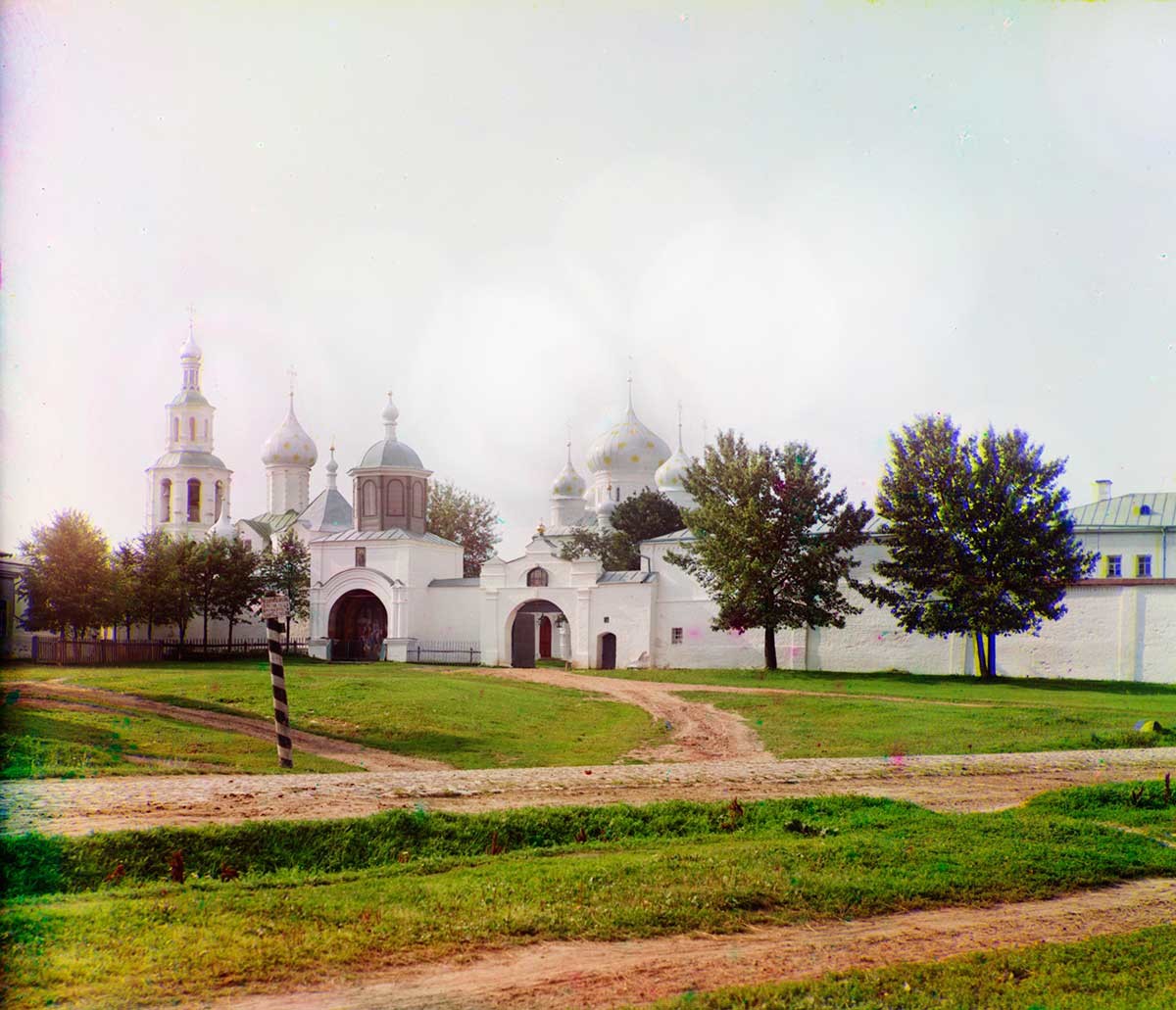 The Feodorovsky Convent subsequently achieved viability and by the 18th century had become a center for weaving, embroidery, needlework, pottery and icon painting. Peter the Great — a frequent visitor to Pereslavl-Zalessky — was acquainted with the abbess, Natalia Vzimkova, and made donations to the convent. He also took a special interest in developing the convent’s production of fabrics.

The convent was further endowed by Peter’s beloved sister, Natalia Alexeyevna, daughter of Tsar Alexey and Natalia Naryshkina (who also supported the convent). With her primary support, the convent gained a refectory church, dedicated to the Presentation in the Temple (1710) and an infirmary church, dedicated to the Kazan Icon of the Virgin (1714), photographed by Prokudin-Gorsky. 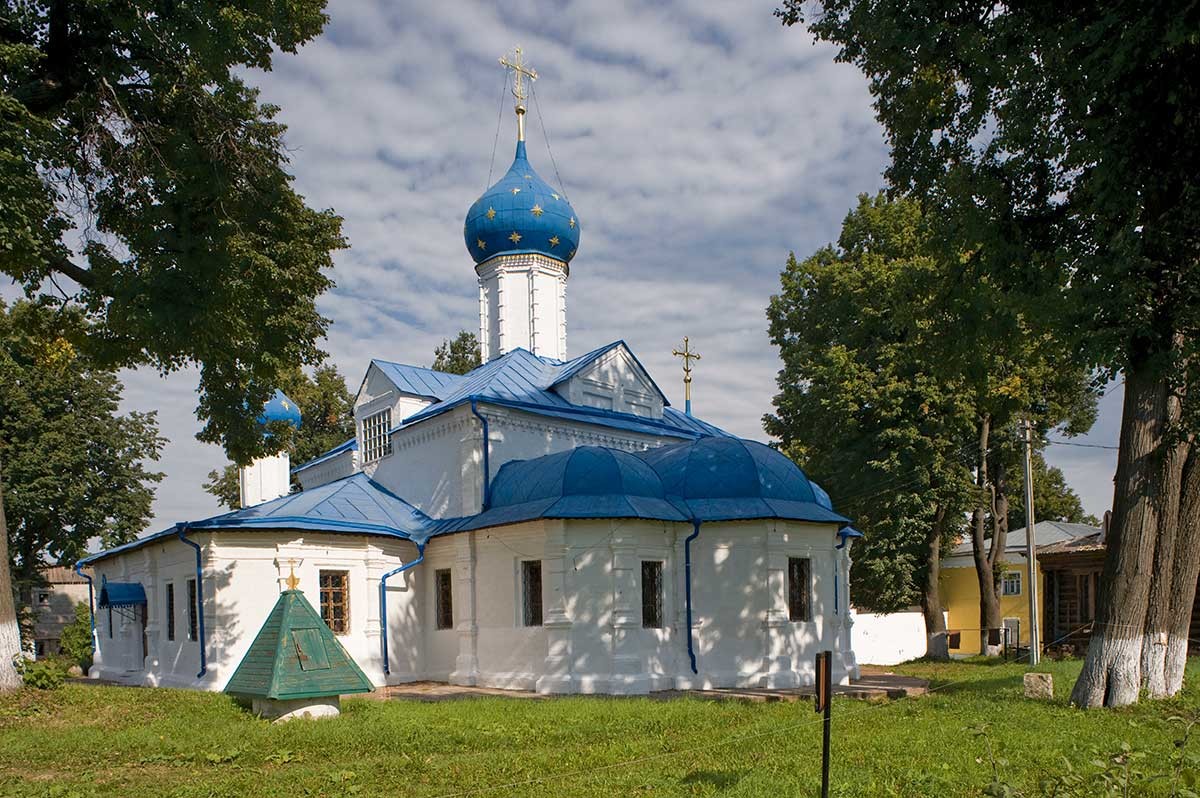 Two wings of brick cloisters, originally built in the 17th century and rebuilt in the 19th century, have now been restored to their 17th-century form. In 1681, the convent territory was enclosed by a brick wall that is magnificently visible in Prokudin-Gorsky’s sweeping southwest view — a view now almost entirely obscured by trees along the Moscow highway.

Although there were insufficient resources to build the usual church over the main entrance gate, a bellcote and a small chapel dedicated to St. Theodore with a sacred well, were built over the gateway originally in the late 17th century. They stand in the forefront of Prokudin-Gorsky’s northwest view of the convent.

By the turn of the 20th century, the Feodorovsky Convent had ​as many as ​400 nuns and novices under the supervision of Mother Evgeniya (1832-1920), who served as mother superior from 1875 to 1916. Closed in 1923, the convent was used for a typical assortment of purposes during the Soviet era, including a colony for abandoned children and workers’ housing. 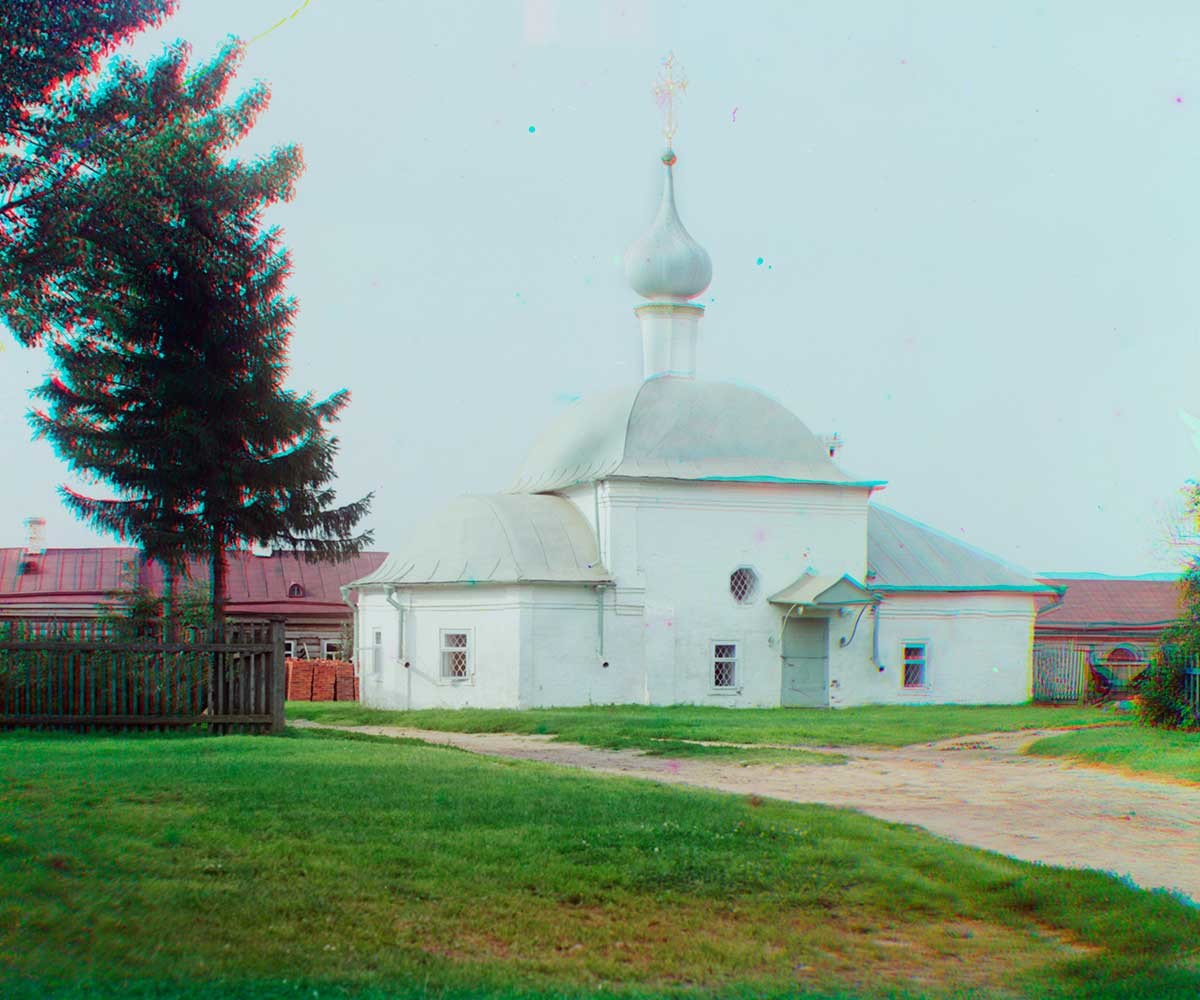 The St. Theodore Cathedral continued to serve parish needs until its closure in 1928. In 1930, the convent’s bell tower, built in 1704 and visible in Prokudin-Gorsky’s photographs, was demolished.

Returning to the Orthodox Church in 1998, the Feodorovsky Convent is now in active use as a spiritual center. Restoration work has produced impressive results, aided by the documentary value of Prokudin-Gorsky’s photographs. 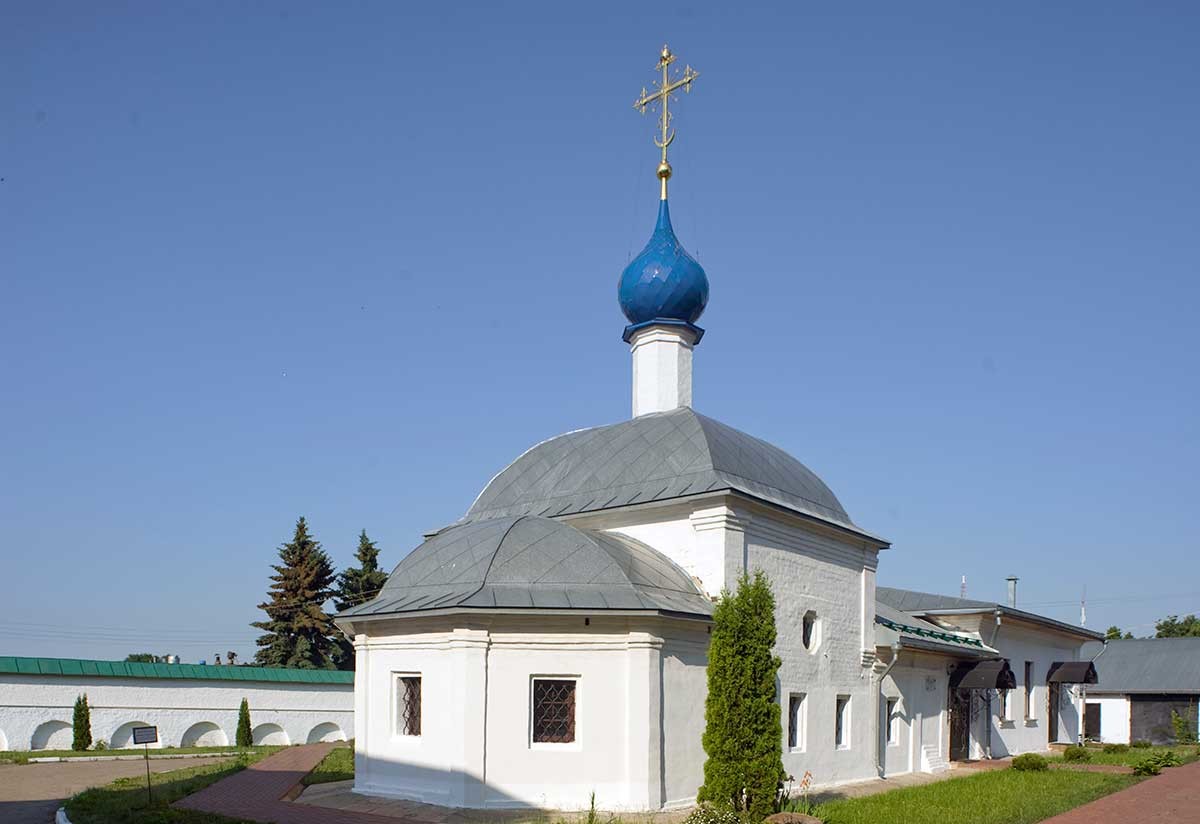 In the early 20th century the Russian photographer Sergei Prokudin-Gorsky devised a complex process for color photography. Between 1903 and 1916 he traveled through the Russian Empire and took over 2,000 photographs with the process, which involved three exposures on a glass plate. In August 1918, he left Russia and ultimately resettled in France with a large part of his collection of glass negatives. After his death in Paris in 1944, his heirs sold the collection to the Library of Congress. In the early 21st century, the Library digitized the Prokudin-Gorsky Collection and made it freely available to the global public. A number of Russian websites now have versions of the collection. In 1986, the architectural historian and photographer William Brumfield organized the first exhibit of Prokudin-Gorsky photographs at the Library of Congress. Over a period of work in Russia beginning in 1970, Brumfield has photographed most of the sites visited by Prokudin-Gorsky. This series of articles will juxtapose Prokudin-Gorsky’s views of architectural monuments with photographs taken by Brumfield decades later.