The wooden church of St. John the Divine in Bogoslov: Monument to an ancient miracle 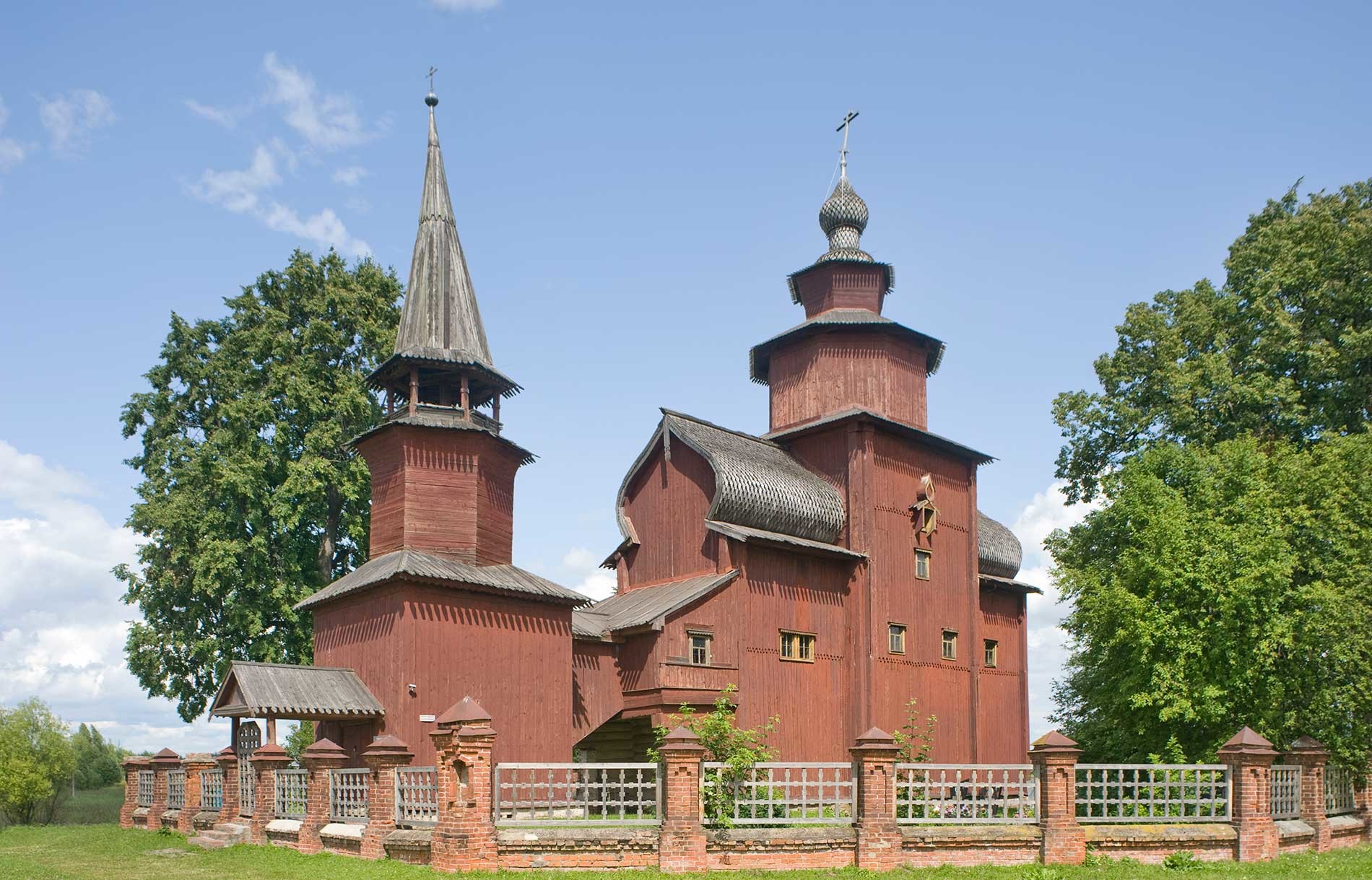 Bogoslov (near Rostov). Wooden Church of St. John the Divine on the Ishnya. South view. July 8, 2019

The village of Bogoslov, on the western outskirts of Rostov-the-Great, is beautiful in itself, but it is renowned for the nearby wooden church of St. John the Divine. This remarkable monument was built in the late 17th century to commemorate a vision of St. John that appeared to St. Avraamy of Rostov centuries earlier. In 1911, the Russian chemist and photographer Sergei Prokudin-Gorsky came to photograph the monument using his special color photographic process. 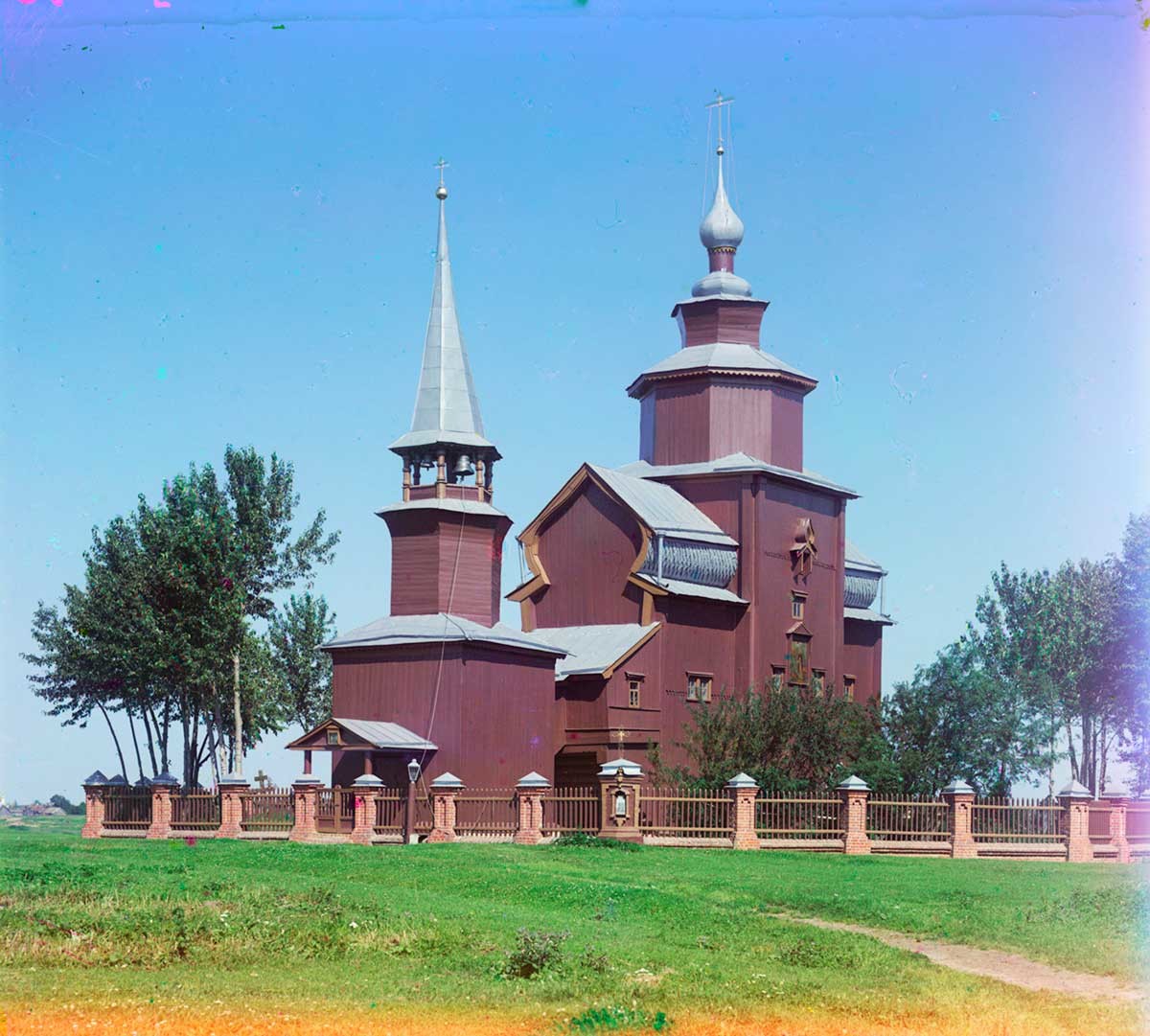 Church of St. John the Divine on the Ishnya. Southwest view. Summer 1911

Among historians, there has been a divergence of opinion concerning the identity of Avraamy as well as the dates of his life. Nonetheless, the Orthodox Church considers him one of its primary early missionaries. He was canonized presumably during the Makaryev Church Councils convened by Metropolitan Macarius of Moscow in 1547-49. 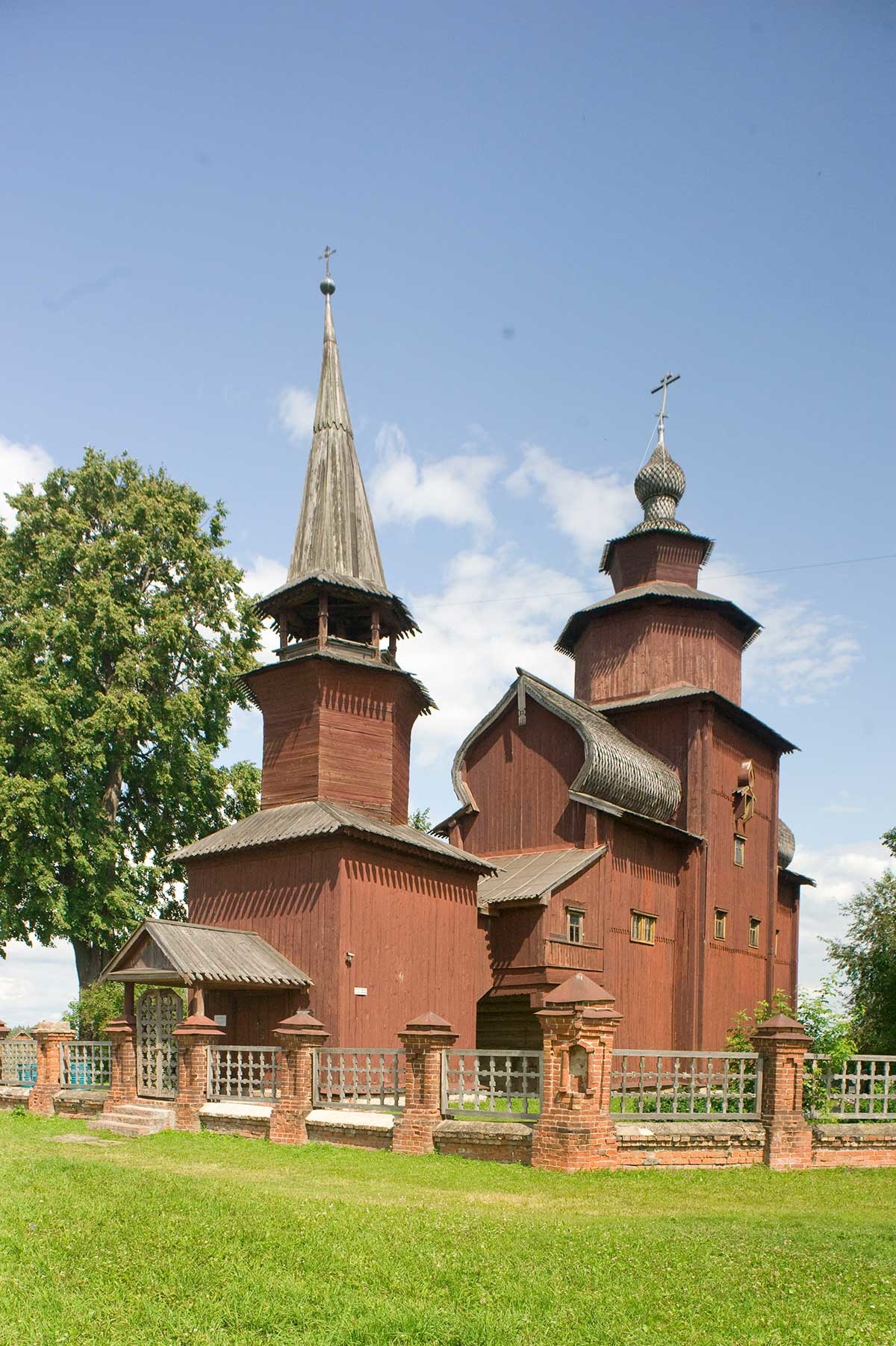 According to accounts of his life authorized by the church, Avraamy’s missionary activity occurred during the decades following the Christianization of Kievan Rus in 988. He eventually made his way to the settlement of Rostov and built a hut on the south shore of Lake Nero. 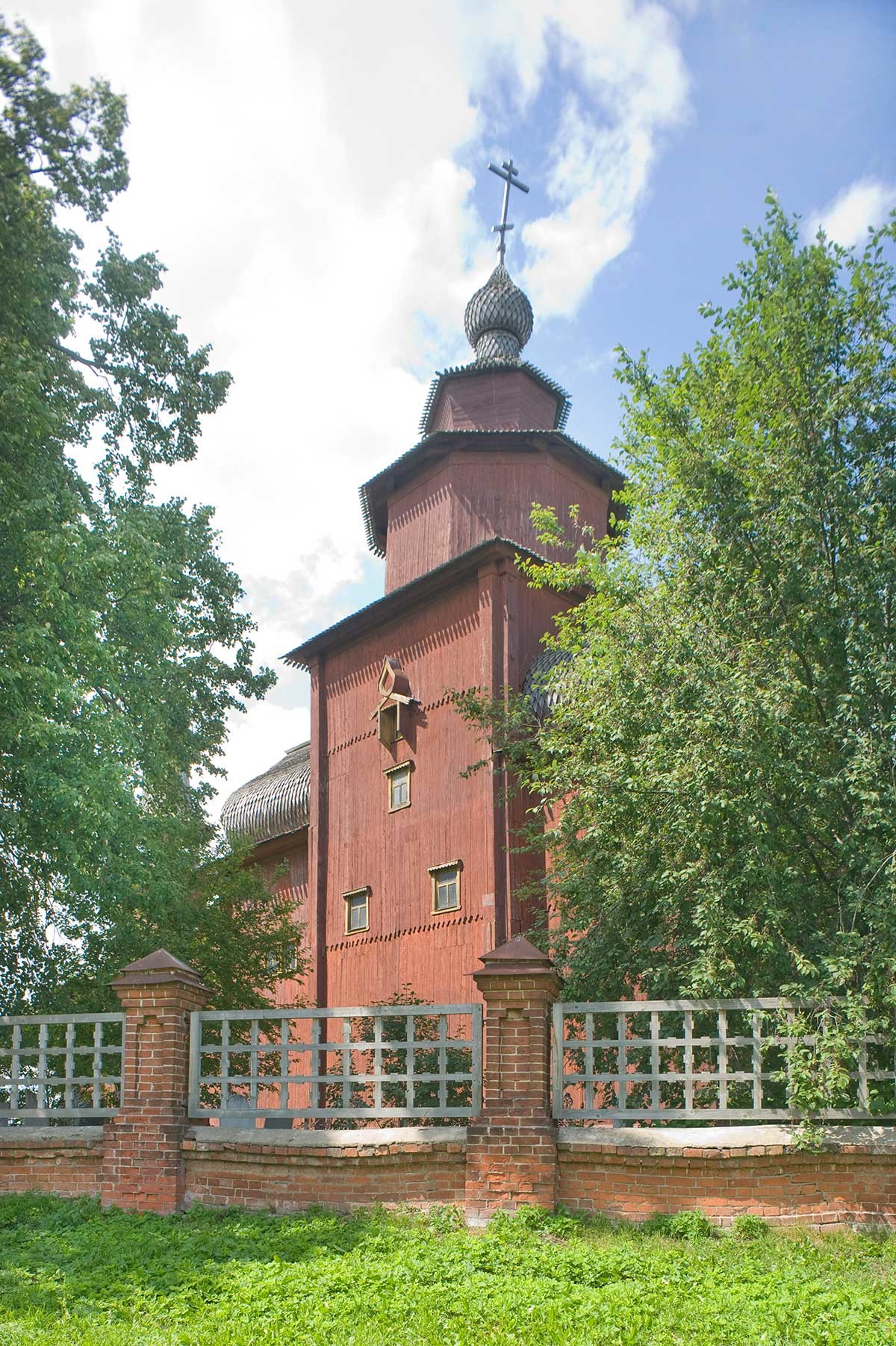 At that time, the local population consisted of a mixture of Finno-Ugric peoples who worshiped pagan gods. According to popular accounts, an awe-inspiring stone idol of the god Veles stood near Lake Nero and was widely venerated.

Beset by the daunting task of countering the idol’s power, Avraamy had a vision of St. John, who gave him a miraculous staff crowned with a cross. With the staff, Avraamy was empowered to overthrow the stone idol and convert its worshippers to the Christian faith. 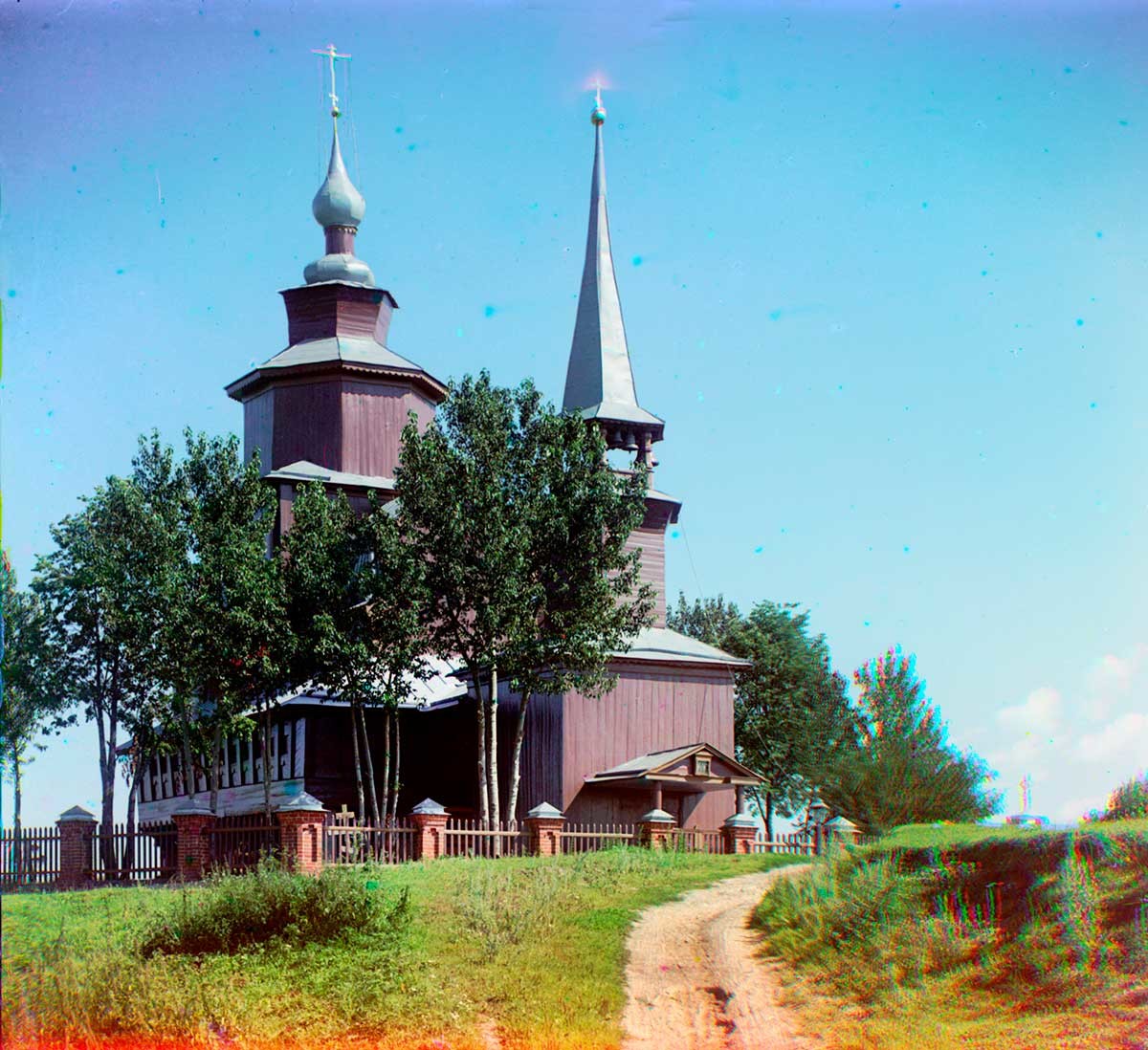 Church of St. John the Divine on the Ishnya. Northest view. Summer 1911

By the 16th century, the Epiphany Monastery had gained the right to operate a toll ferry over the Ishnya River on what was then the road to Moscow. It is likely that earlier wooden churches stood at the site of Avraamy’s vision on this path. Some legends claim that Avraamy himself established the church.

The towering log structure that exists today was constructed in 1687-89 by Gerasim, archimandrite (abbot) of the St. Avraamy-Epiphany Monastery. The main structure ascends in an unusual sequence from a tall square base to an octagonal tier that supports a small hexagonal tier crowned with a cupola. The central core is buttressed by two extensions. The one on the east contains the apse with the altar, while the west extension serves as a vestibule. 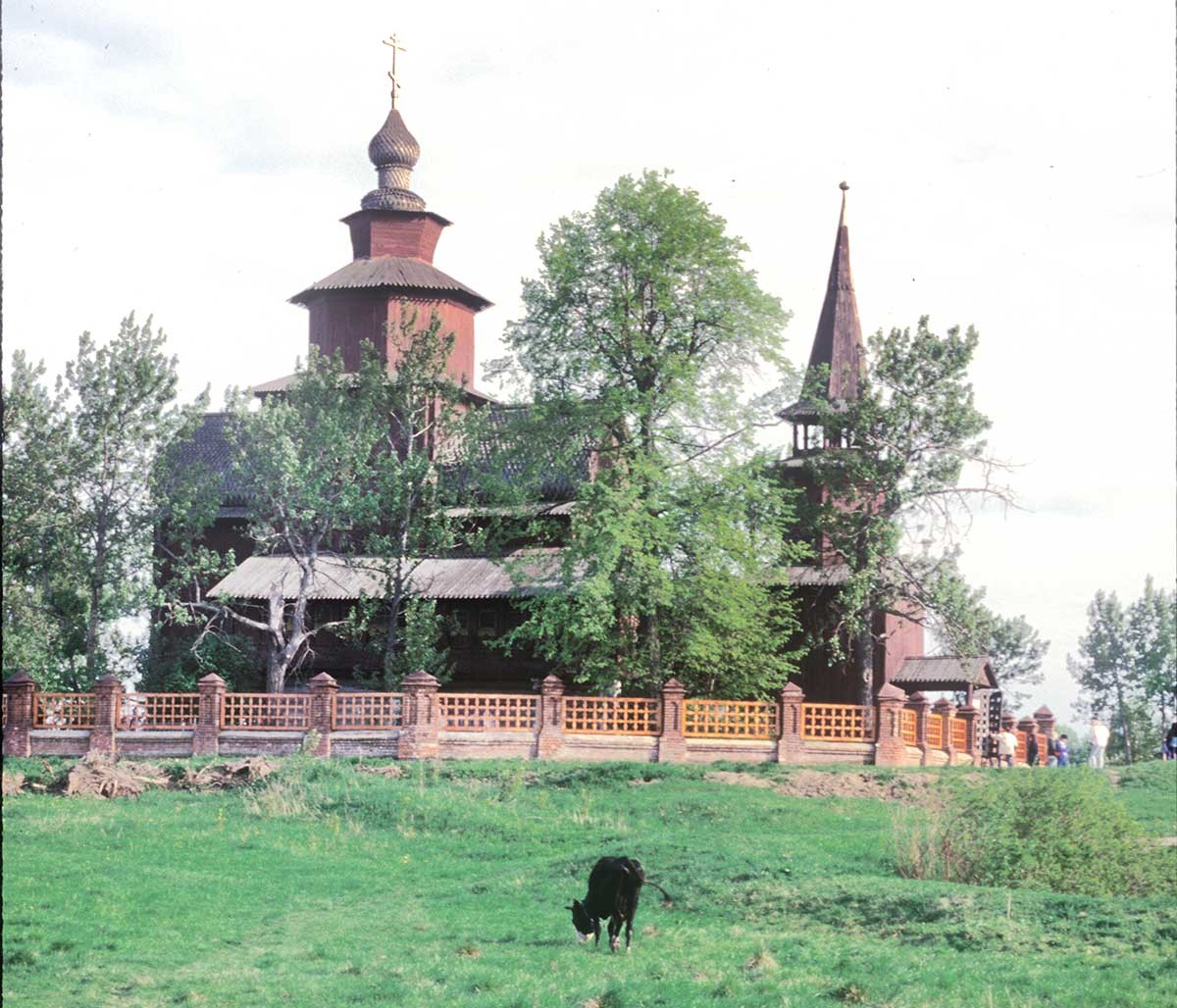 The extensions culminate in magnificent “barrel” (bochka) gables that were roofed with silver aspen shingles. Because of difficulties in maintaining the carved shingles, the upper part of the gable was protected with a plank roof.

In a manner typical of such tiered churches, the main level was elevated some three meters from the ground level. Among other functions, this raised the main floor above winter snow drifts.

The west façade was marked by a covered stairway to the galleries and vestibule. The north and south sides were flanked by enclosed galleries supported on extended log courses (a cantilever effect). Repairs in 1894 led to the removal of the south gallery because of its dilapidated state. The north gallery was preserved and given additional support by a brick pillar. The log walls were covered with plank siding and painted dark red during this period. 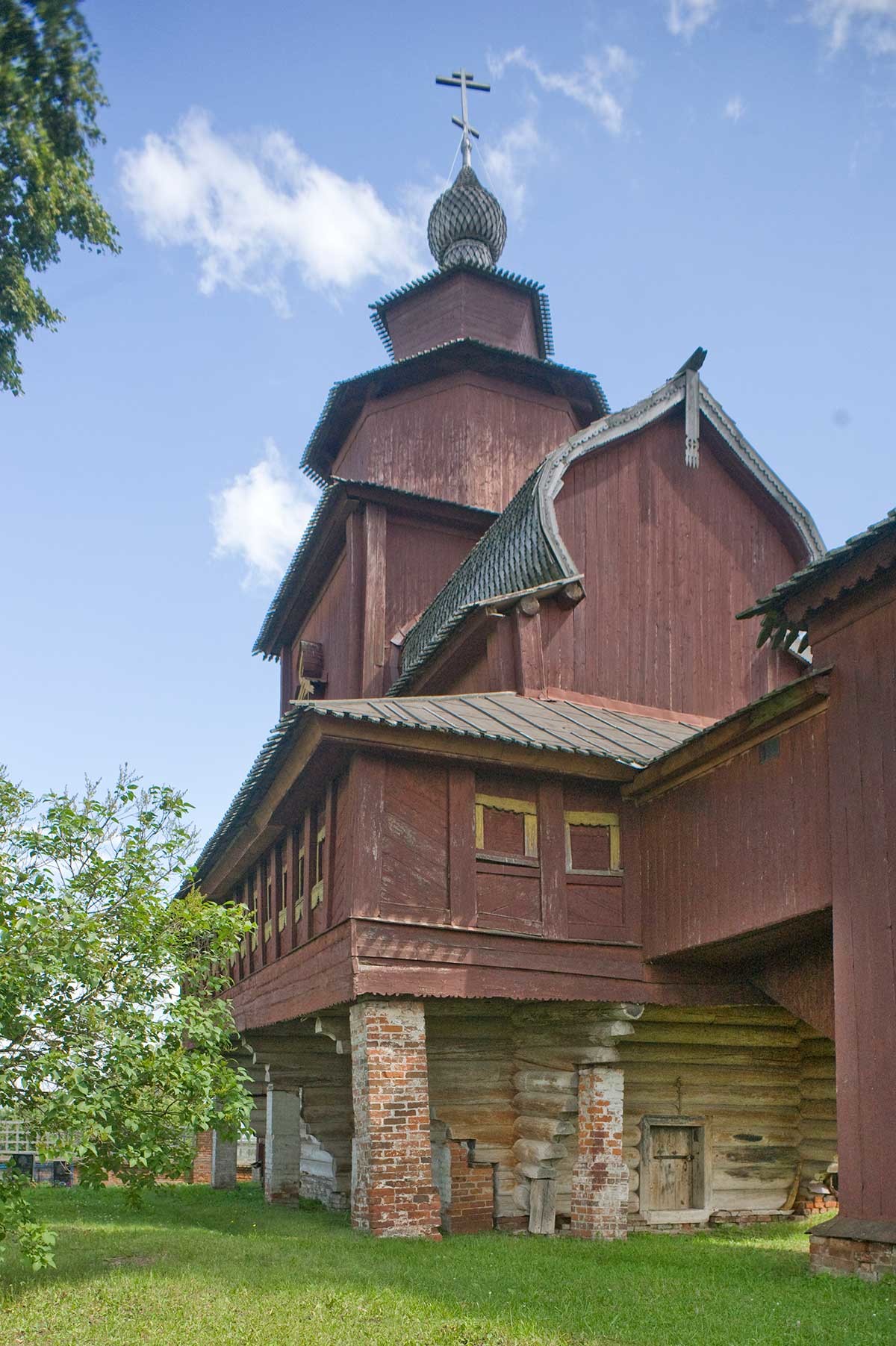 Church of St. John the Divine on the Ishnya. Northwest corner with north gallery. July 8, 2019

The present hexagonal bell tower was added in the early 19th century. To a certain extent its height and steeple impede a perception of the unity of the original church form.

Prokudin-Gorsky’s southwest view of the church shows the attached vestibule and galleries, as well as the covered staircase descending to the entrance beneath the bell tower. My photographs from 1997 and 2019 show the exterior preserved in its essentials.

Prokudin-Gorsky also photographed the interior with its rich array of religious art. Unfortunately, this space is now devoid of most of its furnishings, as is evident from my recent photographs. 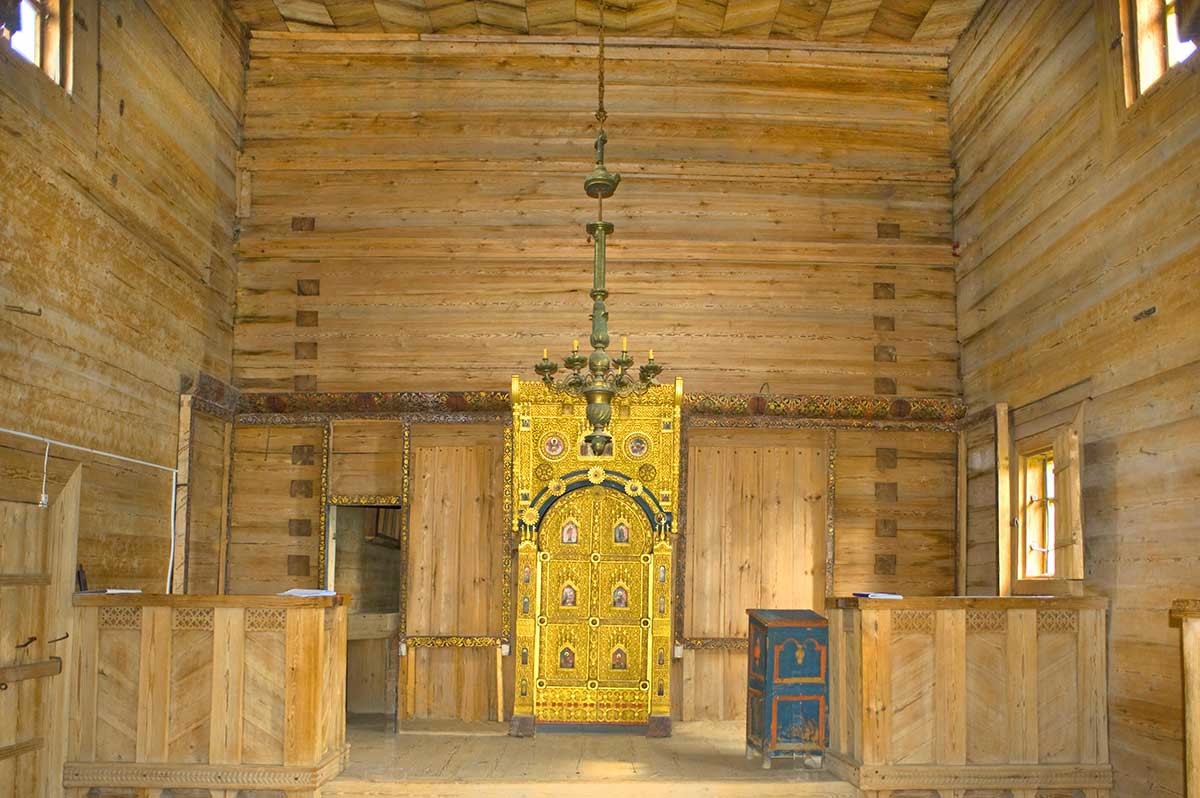 Primary among these religious artifacts was the Royal Gate, which served as the main entrance to the altar through the icon screen. This elaborately carved creation, which glows at the center of two of Prokudin-Gorsky’s photographs, was originally made in 1562 by the monk Isaiah at the St. Avraamy Epiphany Monastery. With the building of the Church of St. John on the Ishnya in the late 17th century, the splendid Royal Gate was provided by the monastery as the center of the church icon screen. Its painted medallions include depictions of the four Evangelists. 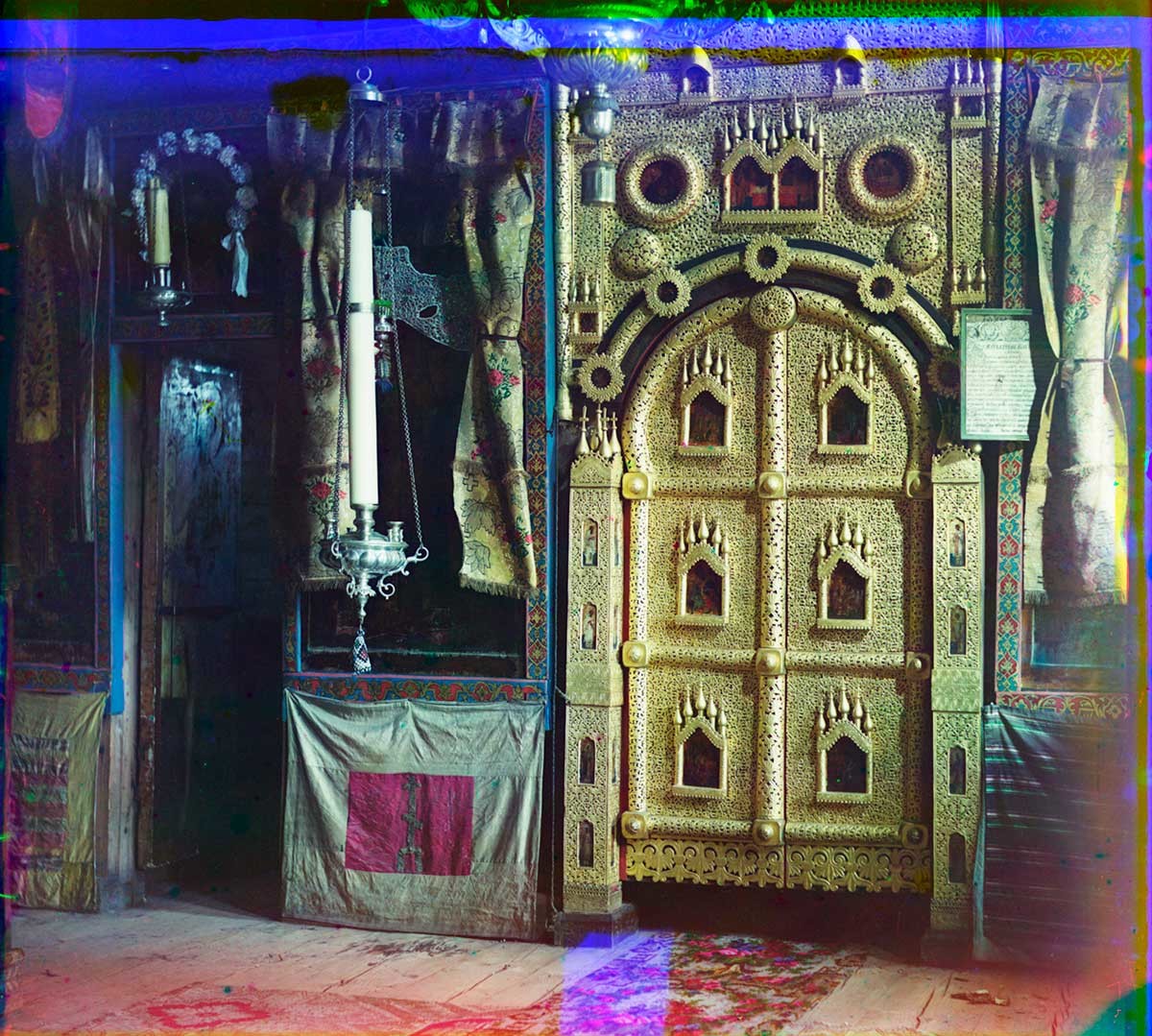 Church of St. John the Divine on the Ishnya. Interior, with icon screen Royal Gate (copy of original). Summer 1911

However, the Royal Gate that appears in the center of Prokudin-Gorsky’s two interior views is a copy. In the late 19th century, the original was recognized for its superb craftsmanship and moved to the newly established Rostov Kremlin Museum, where in can be seen to this day. In return a reproduction of the carved artifact was placed in the church on the Ishnya. 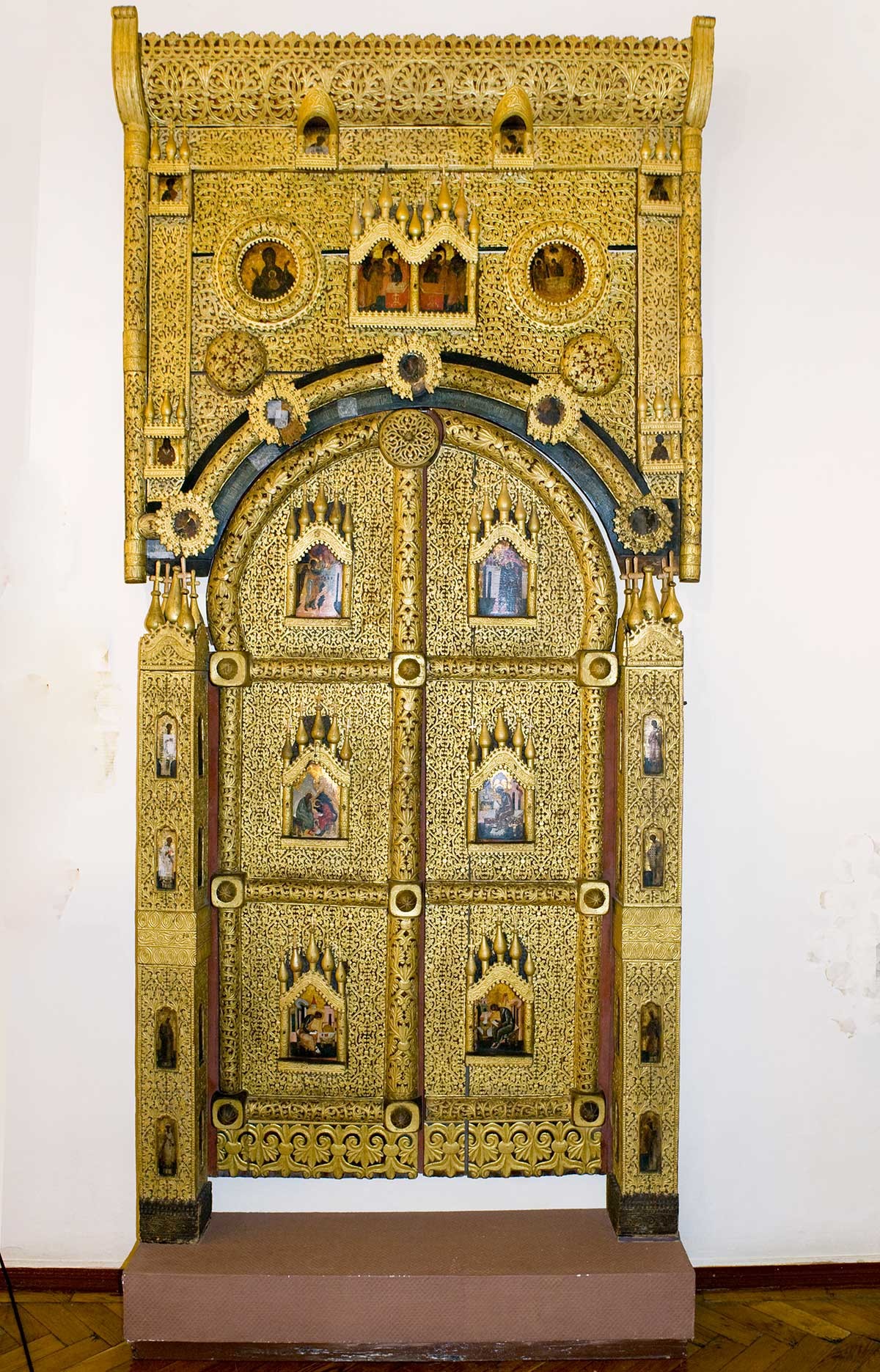 Also visible in Prokudin-Gorsky’s photograph is a large wooden crucifix. Although not visible to visitors, it now stands in damaged form in the church apse, where I was able to photograph it. In recent years the remaining church furnishings have been transferred to the Rostov Museum in order to protect them from fire and theft. 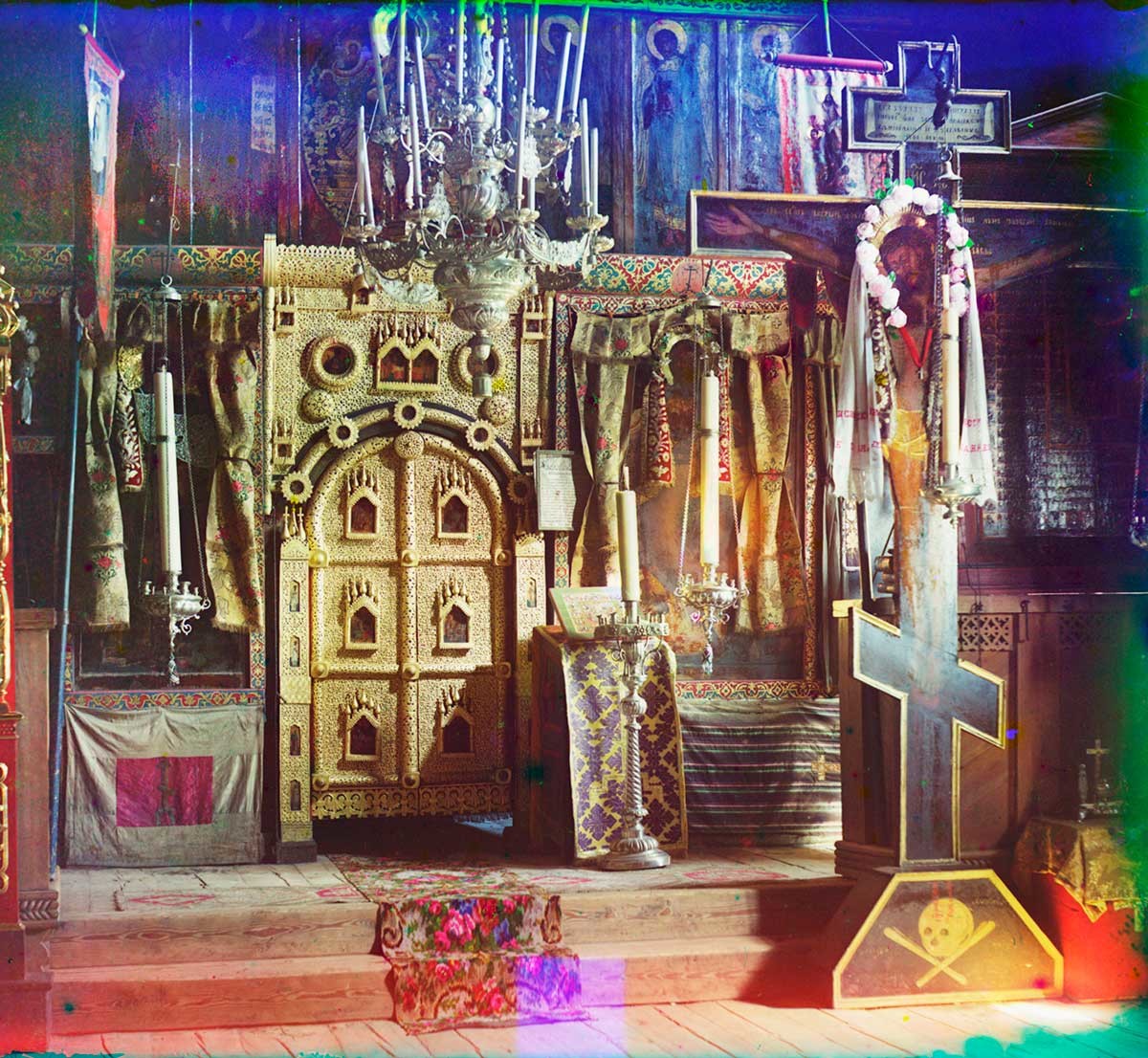 Soon after Prokudin-Gorsky’s work, the Church of St John on the Ishnya was visited by Emperor Nicholas II and his family during their brief stay in Rostov in late May 1913. This event was part of the royal family’s journey to Kostroma in celebration of the tercentenary of the founding of the Romanov dynasty. 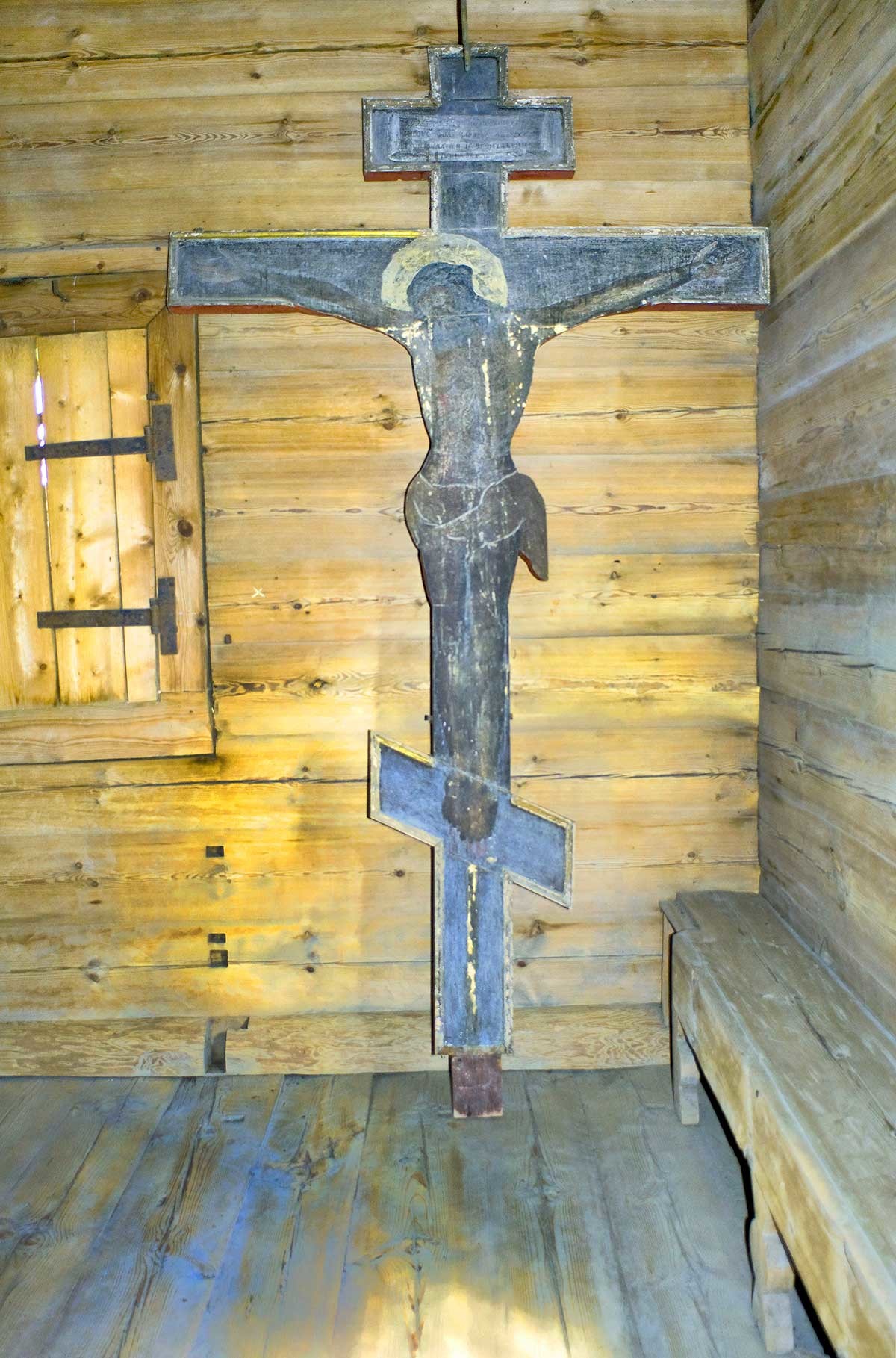 The Church John on the Ishnya is now preserved by the Rostov Museum and is open for visits during the summer months. In view of its wooden construction and the turbulence of the past century, the preservation of this church devoted to a miraculous vision is itself nothing less than a miracle. 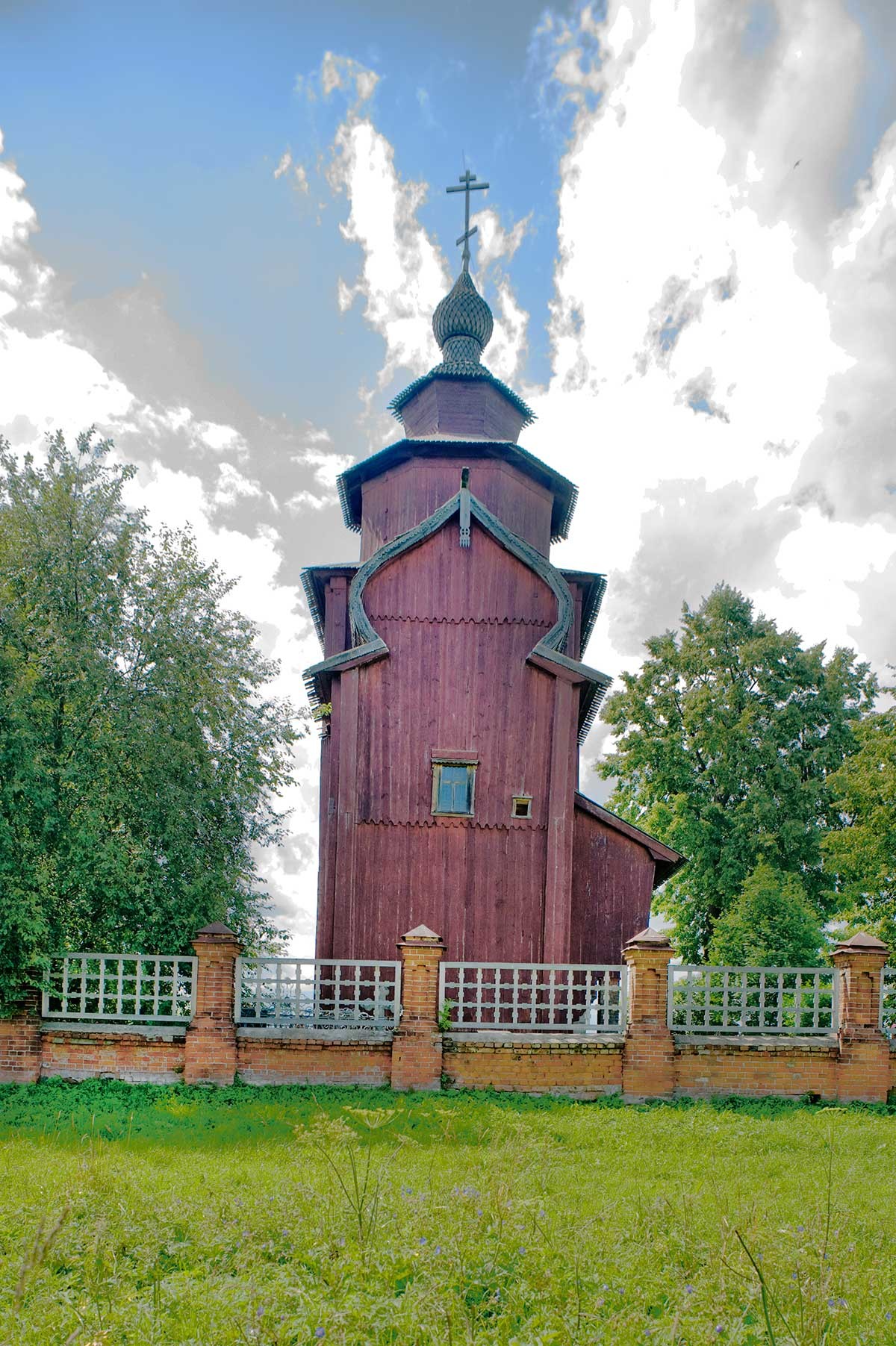 In the early 20th century the Russian photographer Sergei Prokudin-Gorsky devised a complex process for color photography. Between 1903 and 1916 he traveled through the Russian Empire and took over 2,000 photographs with the process, which involved three exposures on a glass plate. In August 1918, he left Russia and ultimately resettled in France with a large part of his collection of glass negatives. After his death in Paris in 1944, his heirs sold the collection to the Library of Congress. In the early 21st century the Library digitized the Prokudin-Gorsky Collection and made it freely available to the global public. Russian websites now have versions of the collection. In 1986 the architectural historian and photographer William Brumfield organized the first exhibit of Prokudin-Gorsky photographs at the Library of Congress. Over a period of work in Russia beginning in 1970, Brumfield has photographed most of the sites visited by Prokudin-Gorsky. This series of articles will juxtapose Prokudin-Gorsky’s views of architectural monuments with photographs taken by Brumfield decades later.