The resplendent cathedral of Vladimir on the Klyazma River 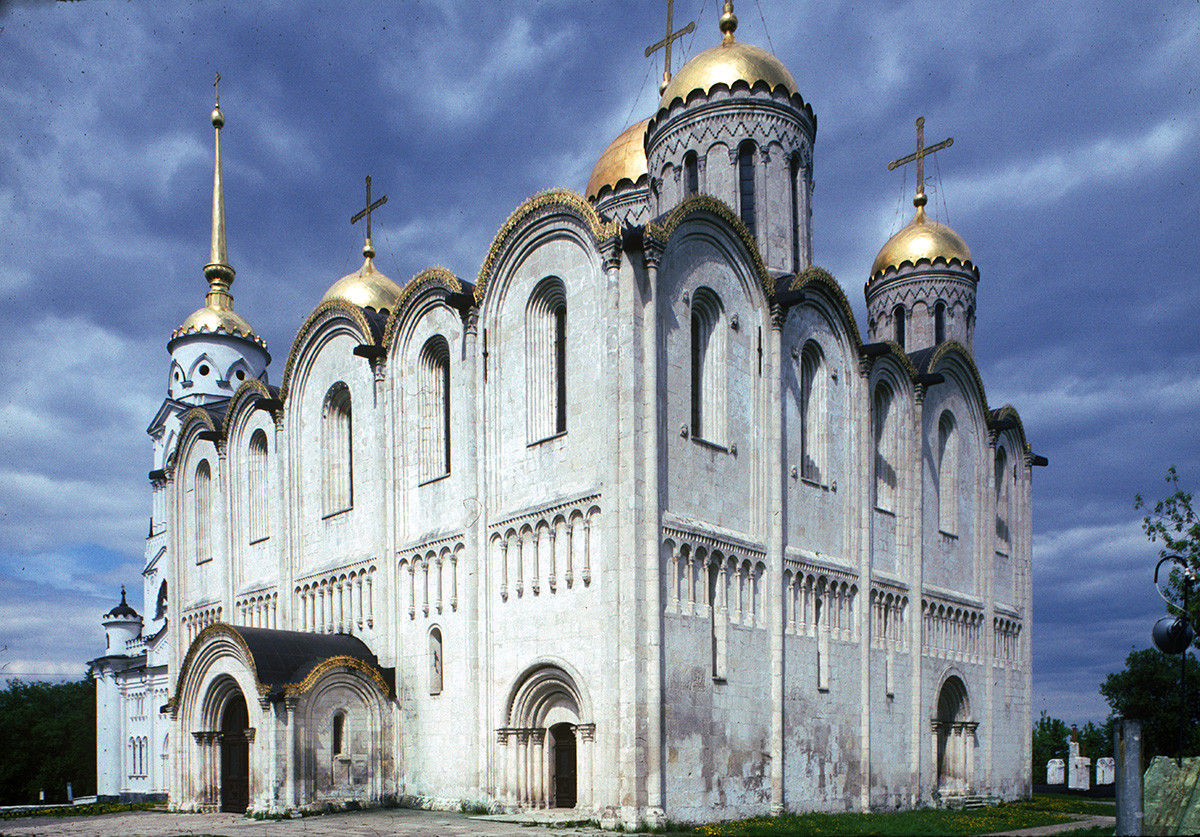 Vladimir. Cathedral of the Dormition, southwest view. May 26, 1997

The fortified settlement of Vladimir was established in 1108 on the high left bank of the Klyazma River by Vladimir Monomakh, who ruled as Grand Prince in Kiev from 1113 to 1125. With his guidance, Vladimir and the surrounding settlements became a center of political and economic power in the lands of the eastern Slavs. In the second half of the 12th century, Monomakh’s descendants Andrey Bogoliubovo and Vsevolod III supported a surge in church construction with a form of limestone known as white stone, quarried down the Volga River in the territory of the Bulgars. 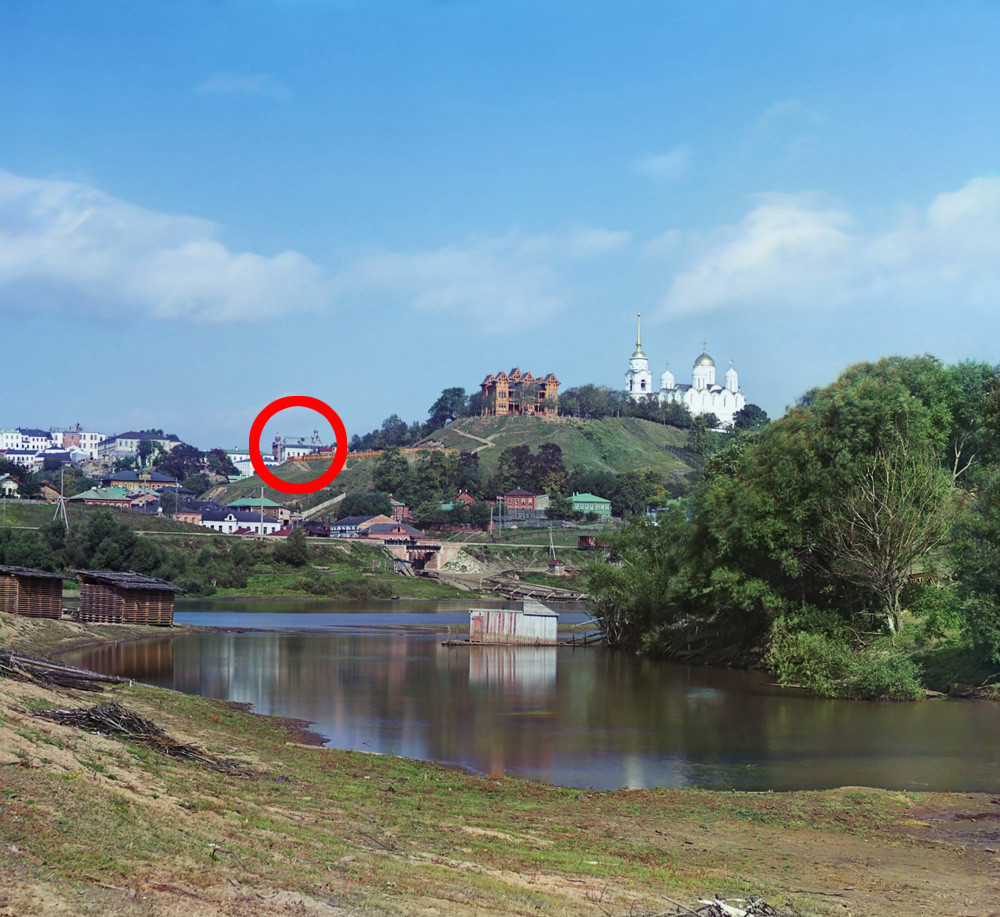 In Summer 1911, the Russian chemist and photographer Sergei Prokudin-Gorsky visited Vladimir as part of his work to chronicle the diversity of the Russian Empire in the beginning of the 20th century. My own photographic work in Vladimir spanned a period from 1972 to 2009, almost a century later.

View from the right bank

Prokudin-Gorsky’s several photographs of Vladimir include two remarkable panoramic views with a steep hill crowned by the golden-domed 12th-century Dormition Cathedral, symbol of religious and political authority in the ancient Russian heartland. Both photographs were taken from the opposite (right) bank of the Klyazma River, a triburary of the Oka River, which in turn flows into the Volga. 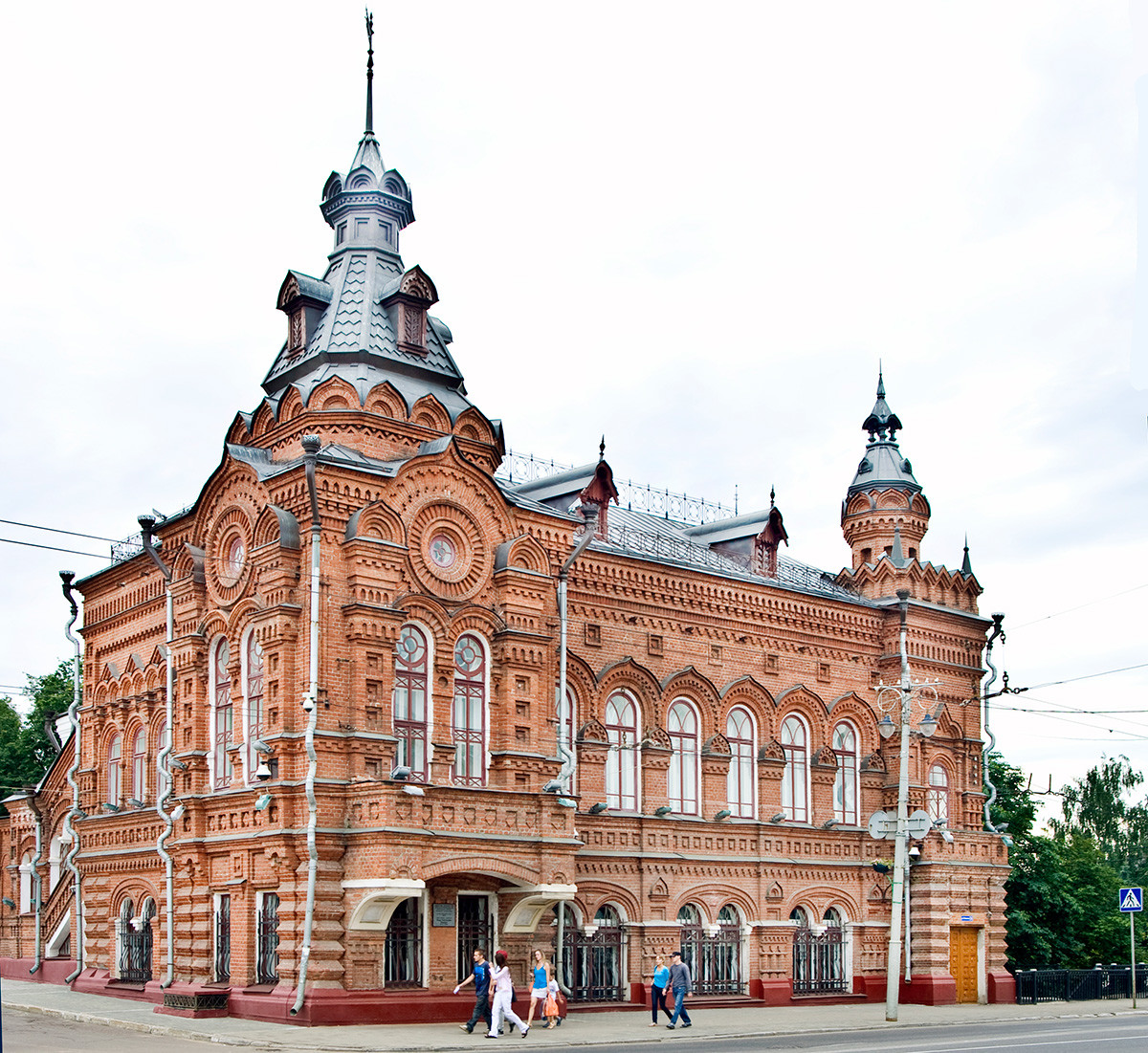 The foreground of the closer view shows a quiet inlet that served as a beach and includes what appears to be a wooden bathing shed on the right side. Today, this quiet refuge is completely overgrown—and the quality of the Klyazma water is perhaps less conducive to bathing. On the far side of the river, the tree-covered ascent to the left in Prokudin-Gorsky’s photograph was dotted with houses, as it is today.

At the top of the ridge (known as studenaia gora, or “cold hill”), there is a partially obscured red brick building with two turrets. This former building of the town council (duma) was constructed in 1906-07 in a Russian Revival style that imitated 17th-century decorative details. In the early 1930s, a two-story addition was attached to the south side, and the structure was adapted for use as a Palace of Pioneers (the Soviet equivalent of Scouts). Since 2008, the building has been designated House of Friendship, which organizes events for visiting delegations. 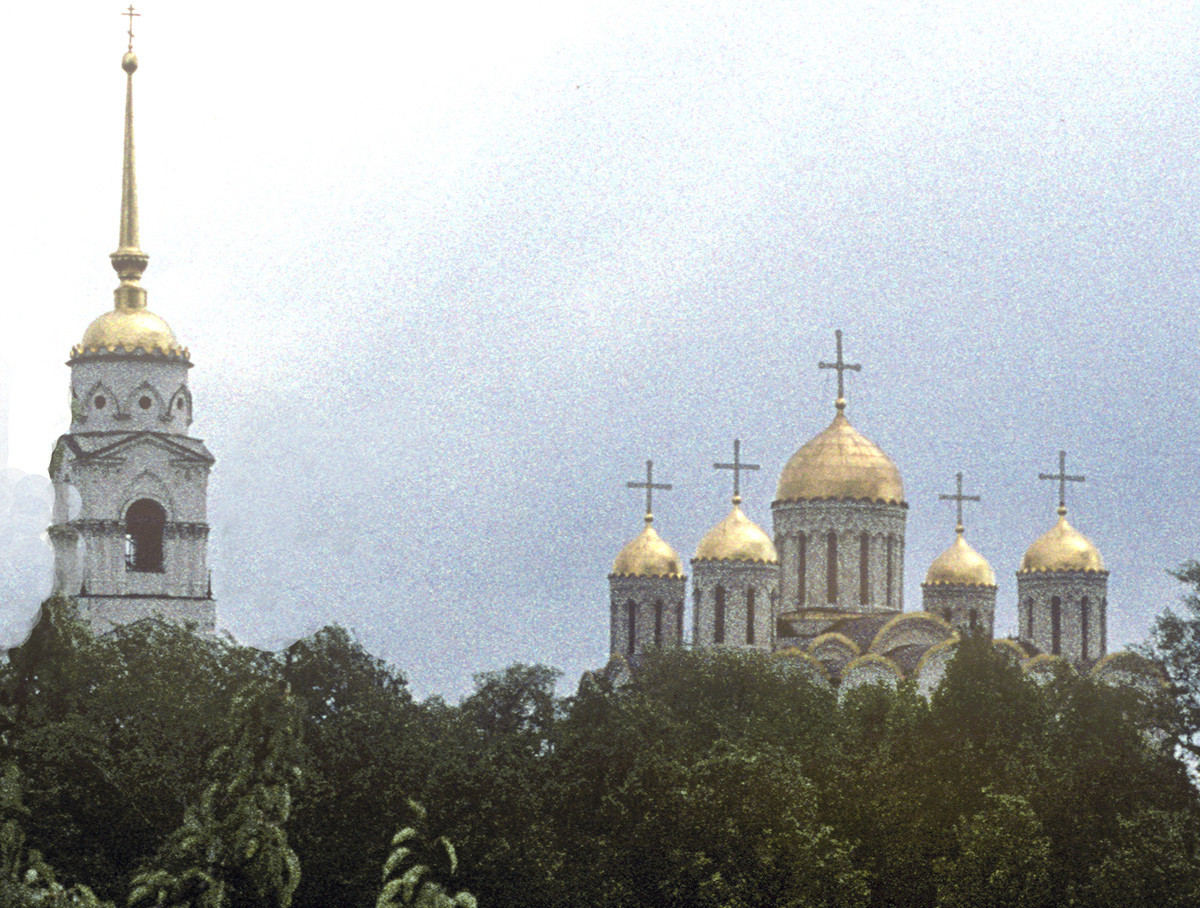 The dominant feature of the photograph, however, is the peak of the hill with the Dormition Cathedral sitting atop it like a crown. It should be noted from the outset that this part of Prokudin-Gorsky’s view is now blocked by a high arched concrete highway bridge across the river. The hulking multi-story wooden house perched on the crest also has long since been removed, thus preserving the pristine ambience of the UNESCO-listed cathedral.

Blend of east and west

This sublime monument is one of the most important shrines in all Russia and served as the model for the Cathedral of the Dormition at the center of the Moscow Kremlin (1470s). Construction of the cathedral was intiated in 1158 by Grand Prince Andrey Bogoliubsky, ruler of a vast expanse of northeast Rus, as the territory of the Eastern Slavs was called. 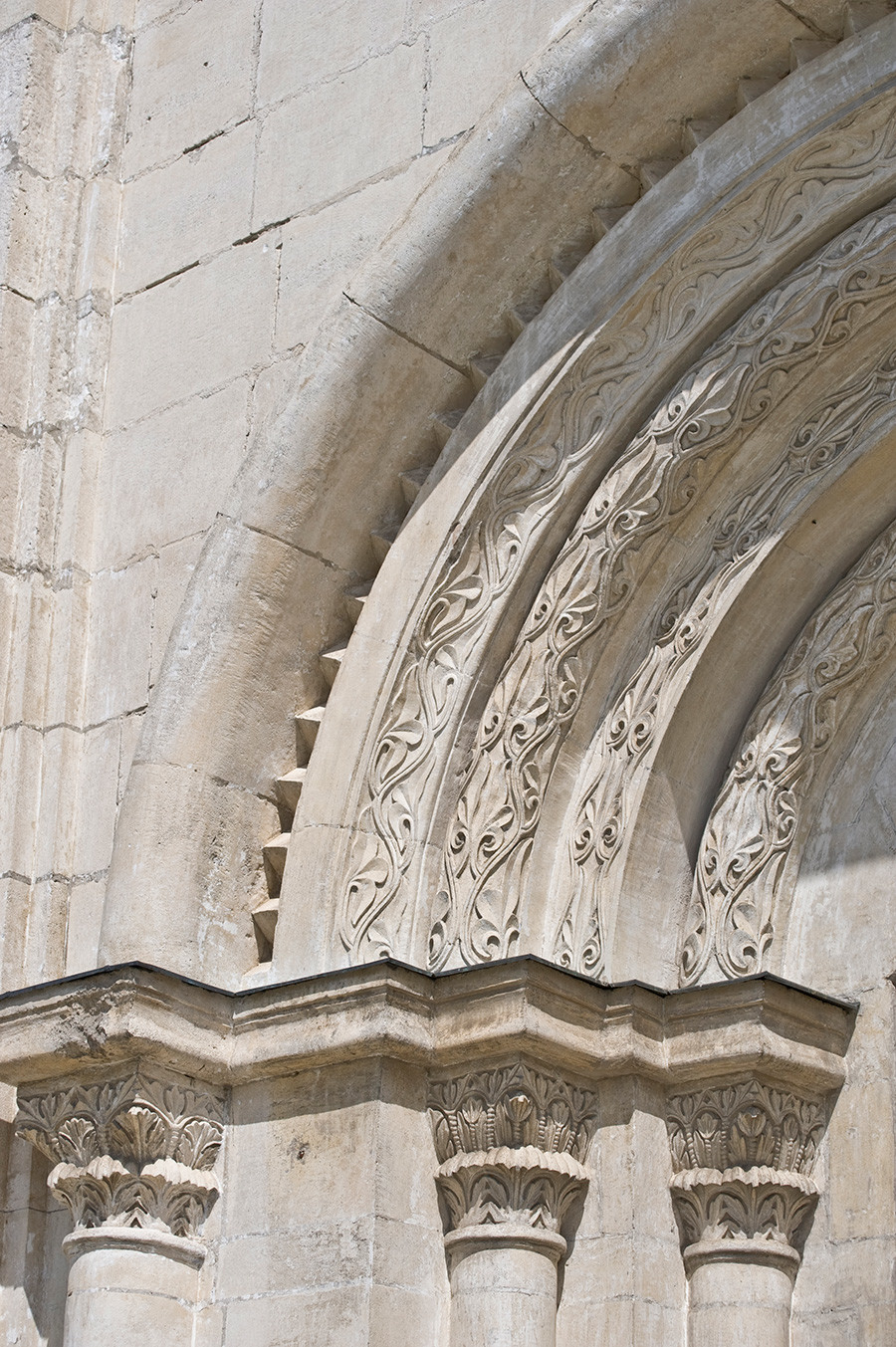 The plan of the Dormition Cathedral involves an elongated dome-centered form, typical of large churches in Kiev and Novgorod during this period. The source of its skilled masonry work remains unclear. The Laurentian chronicle mentions the bringing of masters from "all lands," and there are later references to Nemtsi, or "Germans"—a term broadly used for foreigners. It has been proposed that the artisans were sent to Andrey Bogoliubsky by Frederick Barbarossa. 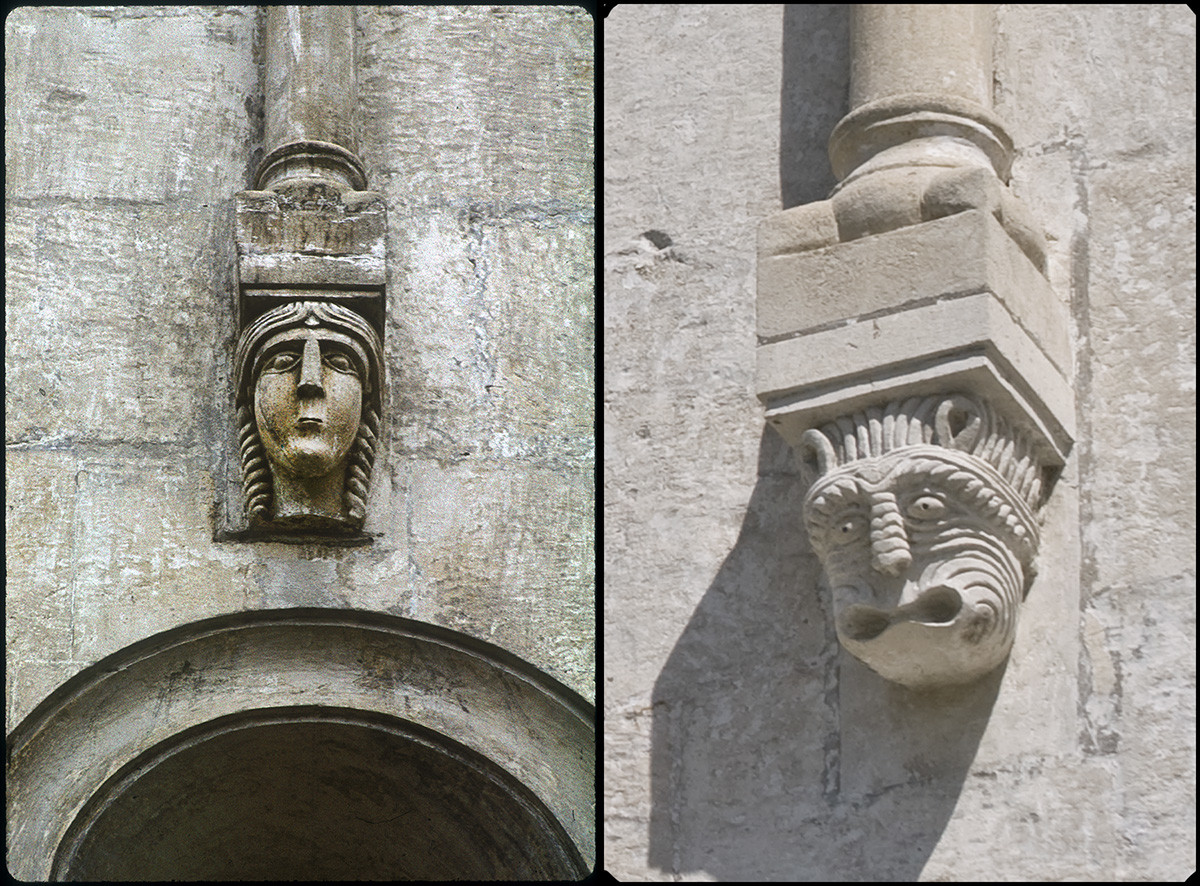 If certain features of the Dormition Cathedral—such as the perspective portals and decorative stonework—suggest Romanesque influence from the Catholic West, the basic plan remained in the tradition of Byzantine dome-centered church architecture as adapted in early medieval Rus.

After a fire in 1185 that destroyed much of Vladimir and severely damaged the cathedral, Andrey’s half-brother, Vsevolod III, commanded its reconstruction in a greatly expanded, more complex form. The rebuilding took place in the relatively short period of 1185-90. 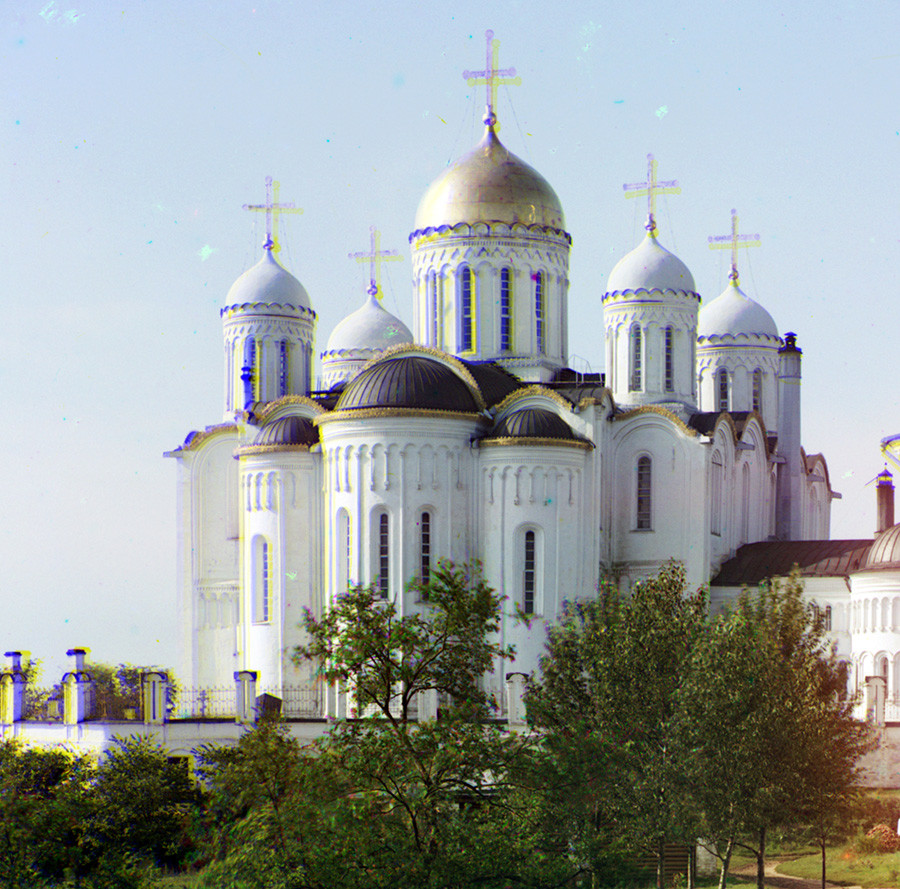 Vsevolod's master builders dismantled attached galleries, but retained the walls of the orginal structure, weakened by fire, as the core of the new cathedral. The plan was increased by an aisle added to the north, west and south sides. The new exterior walls reached two stories, but not the full height of the original structure. The relation between the old and the new was thus ingeniously preserved in the rebuilt structure. 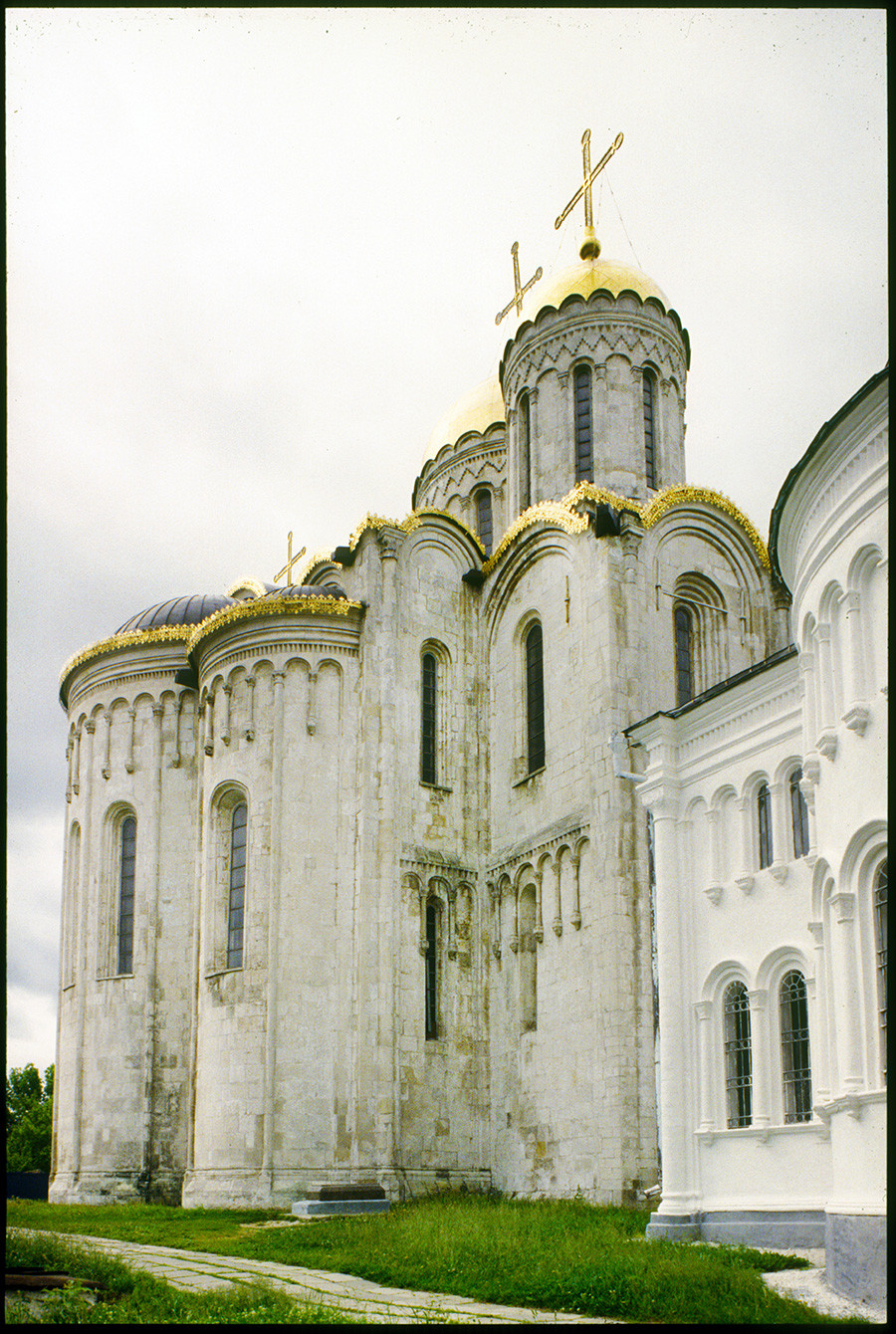 The new facades were marked at mid-level by an arcade frieze with accents of carved ornament visible in my detail photographs. Some of the decorative stonework on the north and south walls was transferred from the original cathedral walls. The cathedral reached its grand culmination with a main dome flanked by four secondary domes on the diagonals. 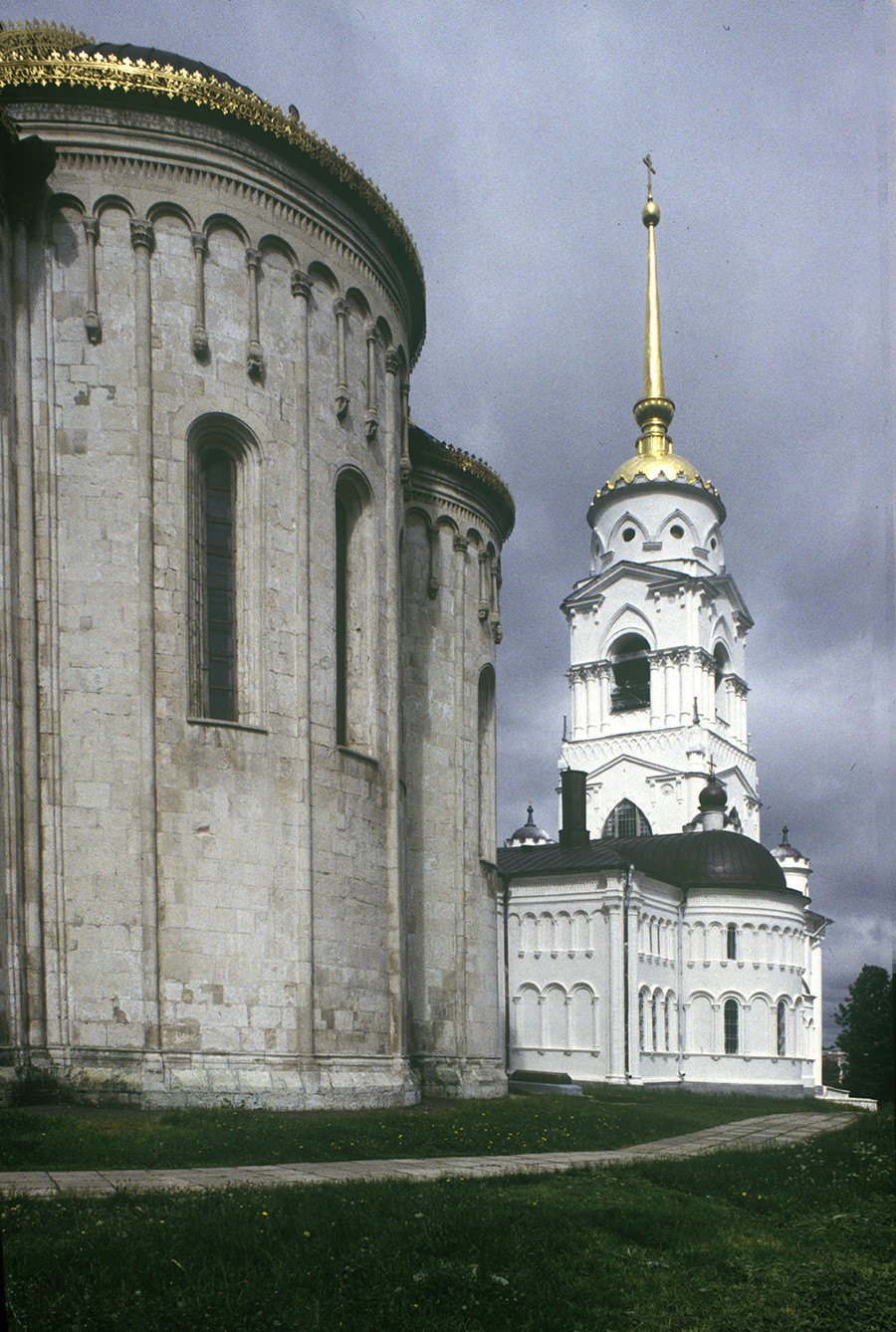 Prokudin-Gorsky also took a view of the cathedral’s east side, which is defined by a three-part apse rebuilt by Vsevolod with expanded dimensions. As usual in Russian Orthodox tradition, the central part of the apse contained the main altar.

Less than a half-century after the completion of the Dormition Cathedral, the Vladimir principality was overwhelmed by the Mongol invasion of Rus. Despite these cataclysmic events, the superbly engineered Dormition Cathedral survived. 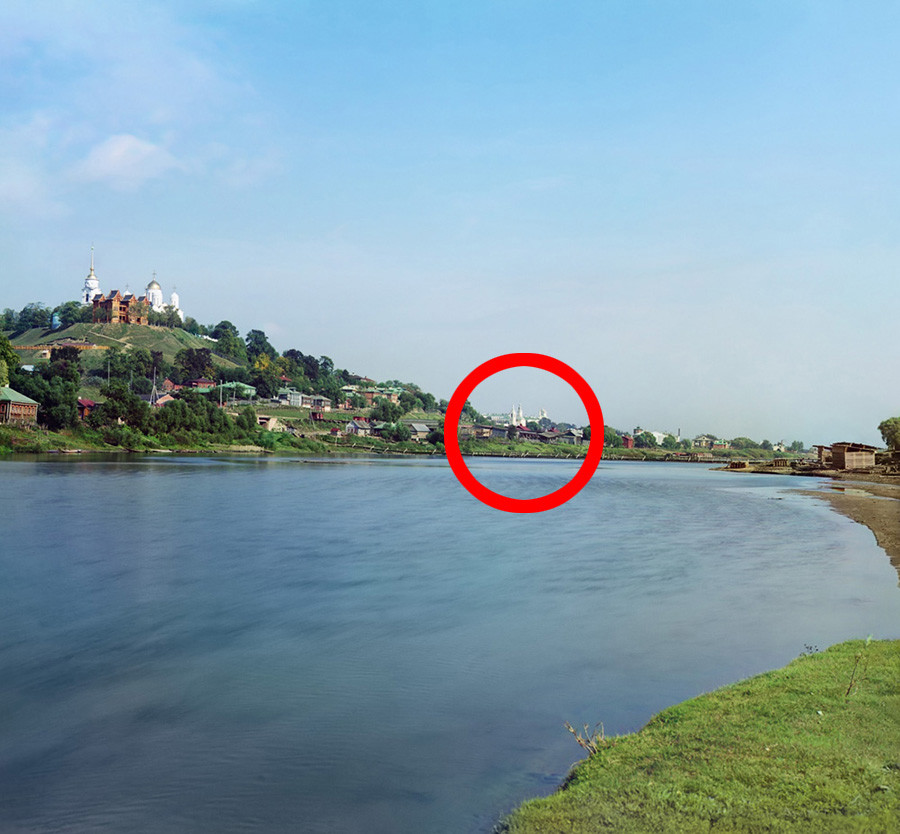 Vladimir was sacked again by a large Tatar raid in 1408, during which the cathedral was ransacked and its roof damaged. Two renowned painters, Andrei Rublev and Daniil Chorny, were brought to redo the interior. Fragments of Rublev’s frescoes have survived in the west part of the cathedral and depict the Last Judgement.

During a visit to Vladimir in 1767, Empress Catherine the Great was taken by the Dormition Cathedral, and personally supported its renovation. Although well-intentioned, changes effected in this and subsequent decades disfigured the cathedral’s appearance.

In 1810, a large bell tower was erected just to the north, and in 1862, a church dedicated to St. George was designed by Nicholas Artleben in a Gothic Revival style to fill the space between the bell tower and cathedral’s north façade. These additions created a new perspective on the ensemble from the north, facing the town’s main street (Moscow Street).

Comprehensive, informed restoration work in the 1880s eliminated most of the distortions made during the preceding century and uncovered a major part of Andrei Rublev’s frescoes. Another prolonged restoration phase concluded in the early 1980s. 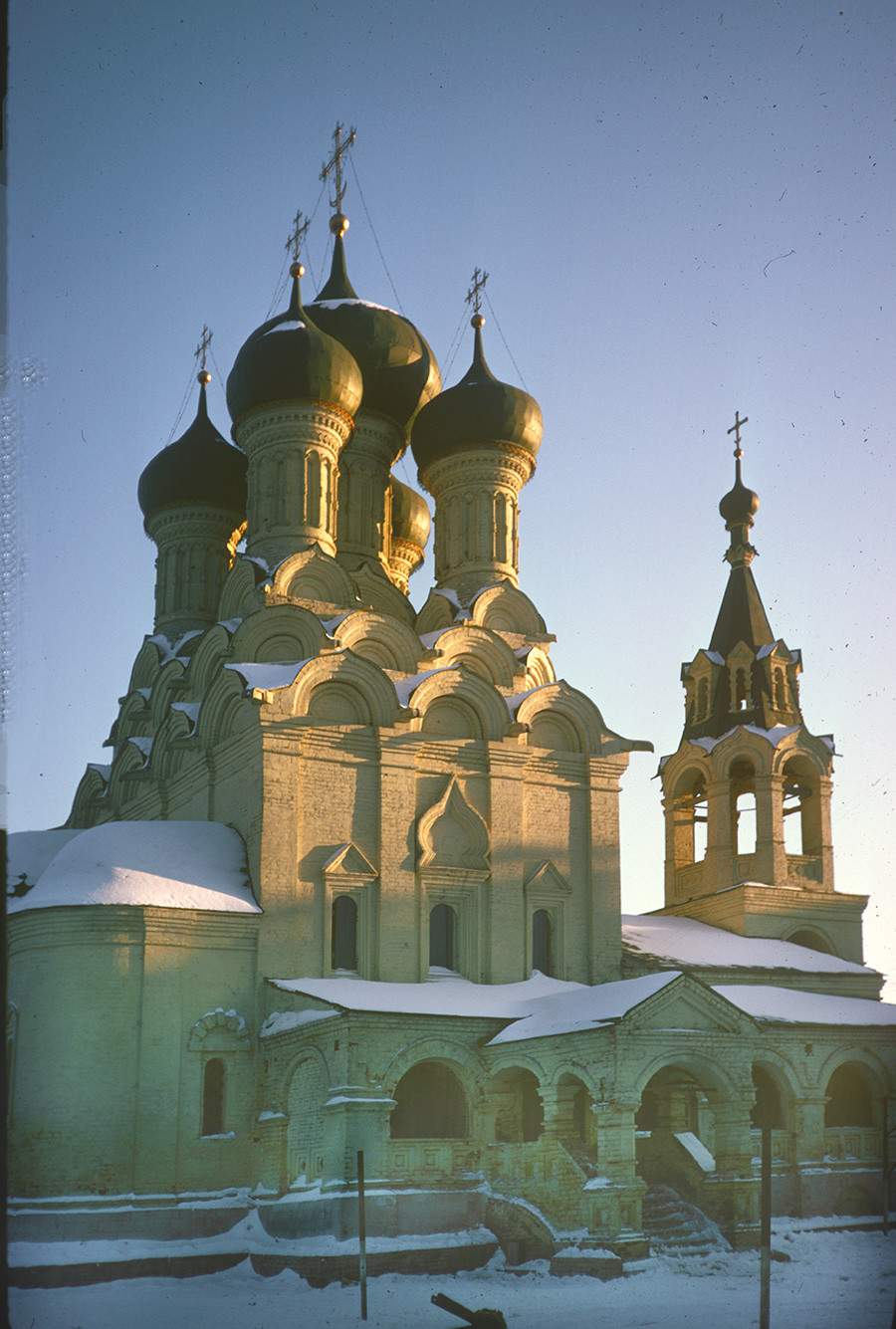 In 1992, the Dormition Cathedral was included in the UNESCO World Heritage List. Responsibility for this defining cultural and historical monument is now shared between the Vladimir-Suzdal Museum Preserve and the Diocese of Vladimir, for which it serves as the main cathedral. 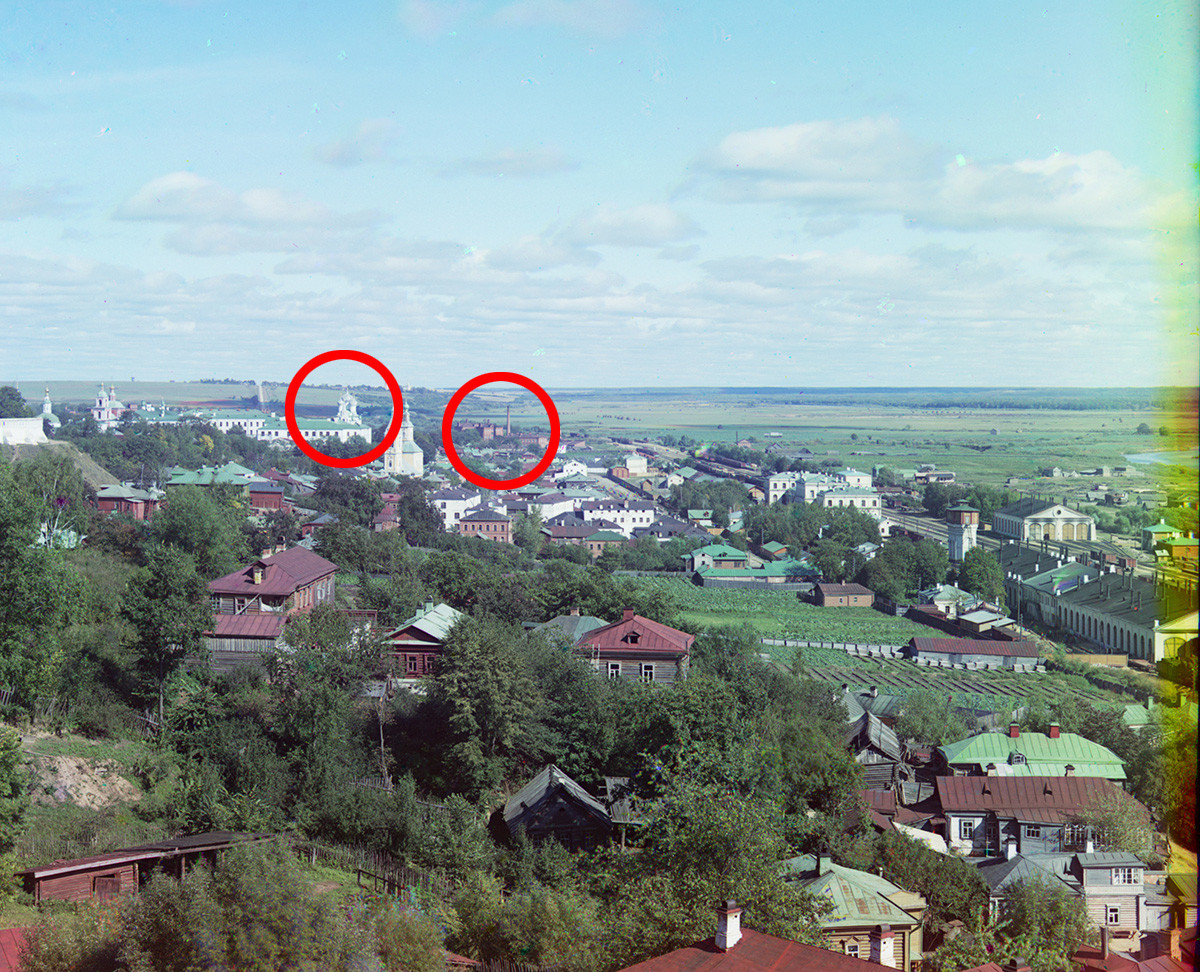 The cathedral figures in yet another of Prokudin-Gorsky’s dramatic panoramas, a sweeping east view taken from the very edge of the Klyazma a bit farther upriver from the preceding panorama. Here the medieval shrine is partially obscured by the large wooden building (demolished), and the entire vista is now obscured by the highway bridge mentioned earlier.

With so many changes, this photograph is particularly important as a historical record. For example, the slender church with bell tower at the base of the hill in the center was built in 1776 and consecrated to the Women Bearing Myrrh (who discovered the empty tomb of Christ’s resurrection).  In 1929, this church, located near the main railway station, was demolished. Its site is now marked by a simple brick chapel. 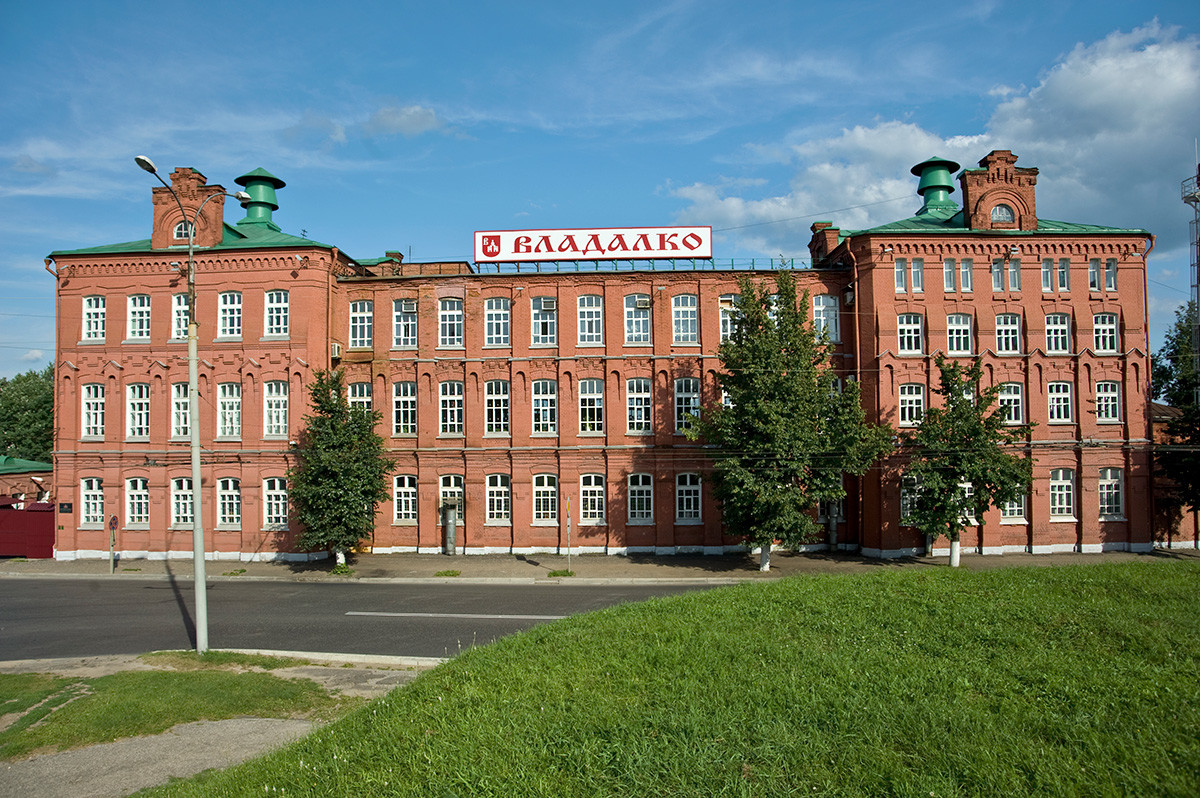 Barely visible in the east distance, however, are the domes of yet another church, dedicated to the Dormition. Now used by a parish of Orthodox dissenters known as Old Believers, this festive structure was built in 1644-49 and is Vladimir’s best example of an ornamental style that flourished in the mid-17th century. My photograph, taken in a winter sunset, conveys the poetry of this distinctively Russian decorative display.