Place of pilgrimage: The Borisoglebsky Monastery near Rostov 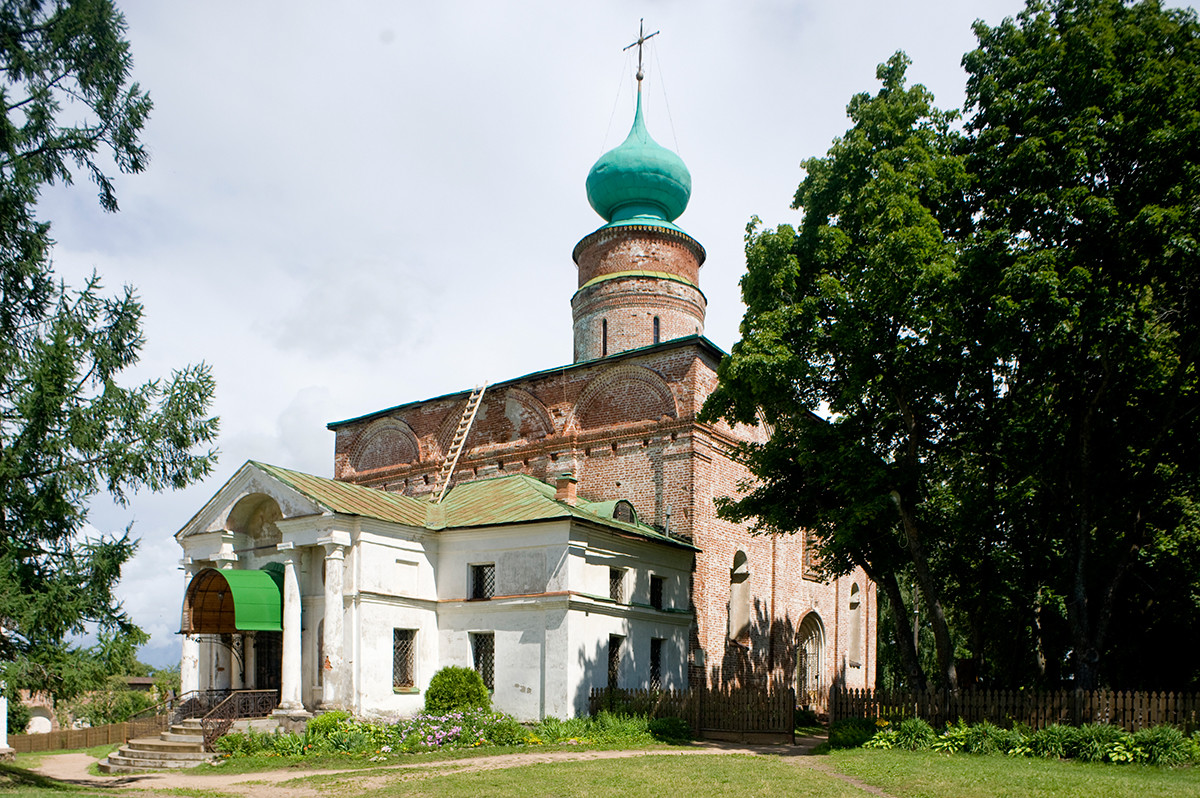 The Monastery of Sts. Boris and Gleb, dedicated to young Kievan princes martyred in the early 11th century, has long been a place of veneration for travelers in the Yaroslavl Region. In the summer of 1911, Russian chemist and photographer Sergei Prokudin-Gorsky paid a visit to the monastery as part of his travels to document the diversity of the Russian empire in the early 20th century. 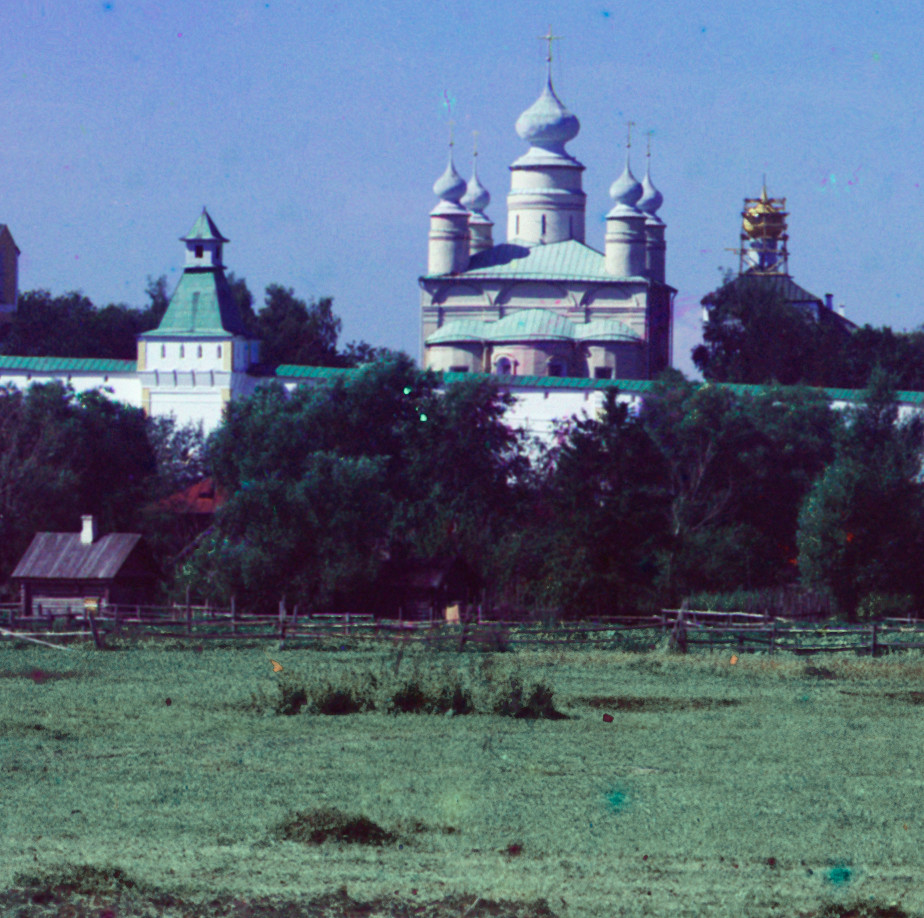 The Monastery of Sts. Boris and Gleb was founded in 1363 by the Novgorod monks Fyodor and Pavel (Paul) with the blessing of St. Sergius of Radonezh, the guiding light of Muscovite monasticism. From this auspicious beginning, the monastery was soon favored by Muscovy’s rulers, including Tsar Ivan III (the Great, 1440-1505) who was baptized there in 1440. His son Basil III and grandson Ivan IV (the Terrible) continued the royal patronage. 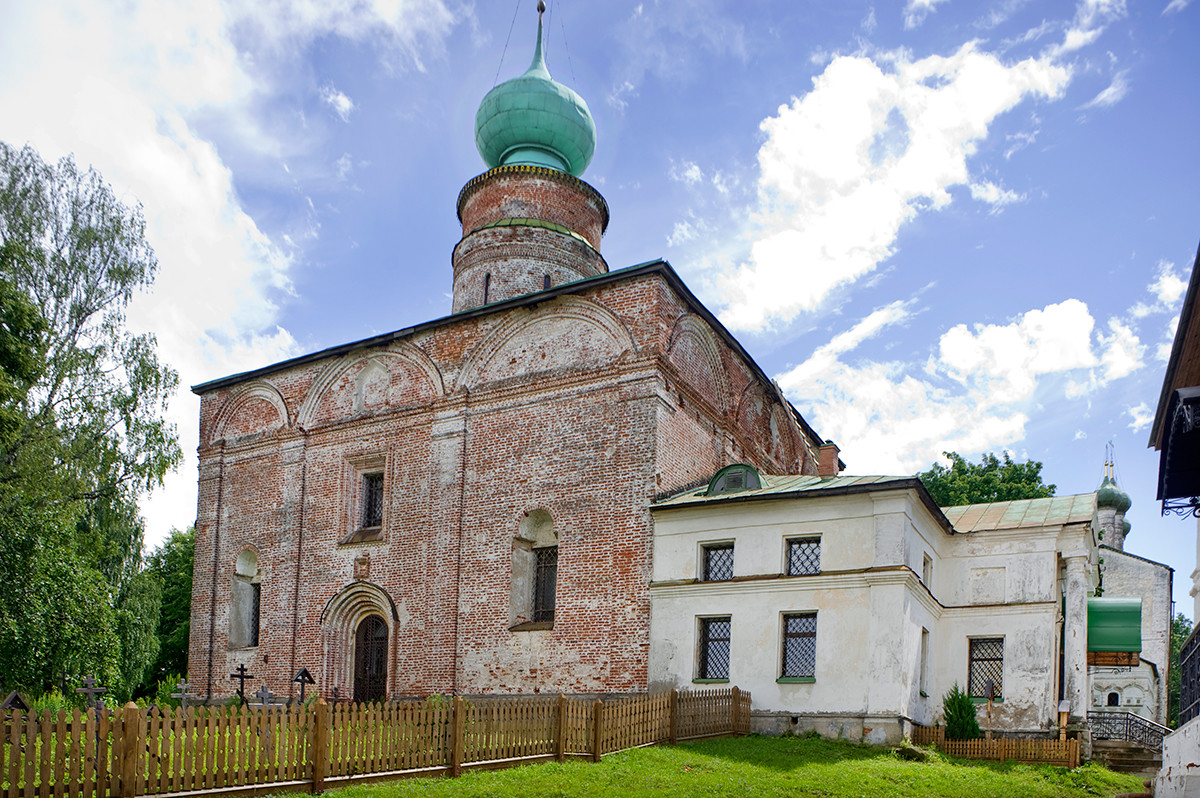 Masonry construction at the monastery began during the reign of Basil III with the establishment of a brickworks in the early 1520s. The first masonry structure was the monastery’s primary shrine, the Cathedral of Sts. Boris and Gleb, built in 1524 and standing to this day, albeit with substantial modifications in the 18th and 19th centuries. 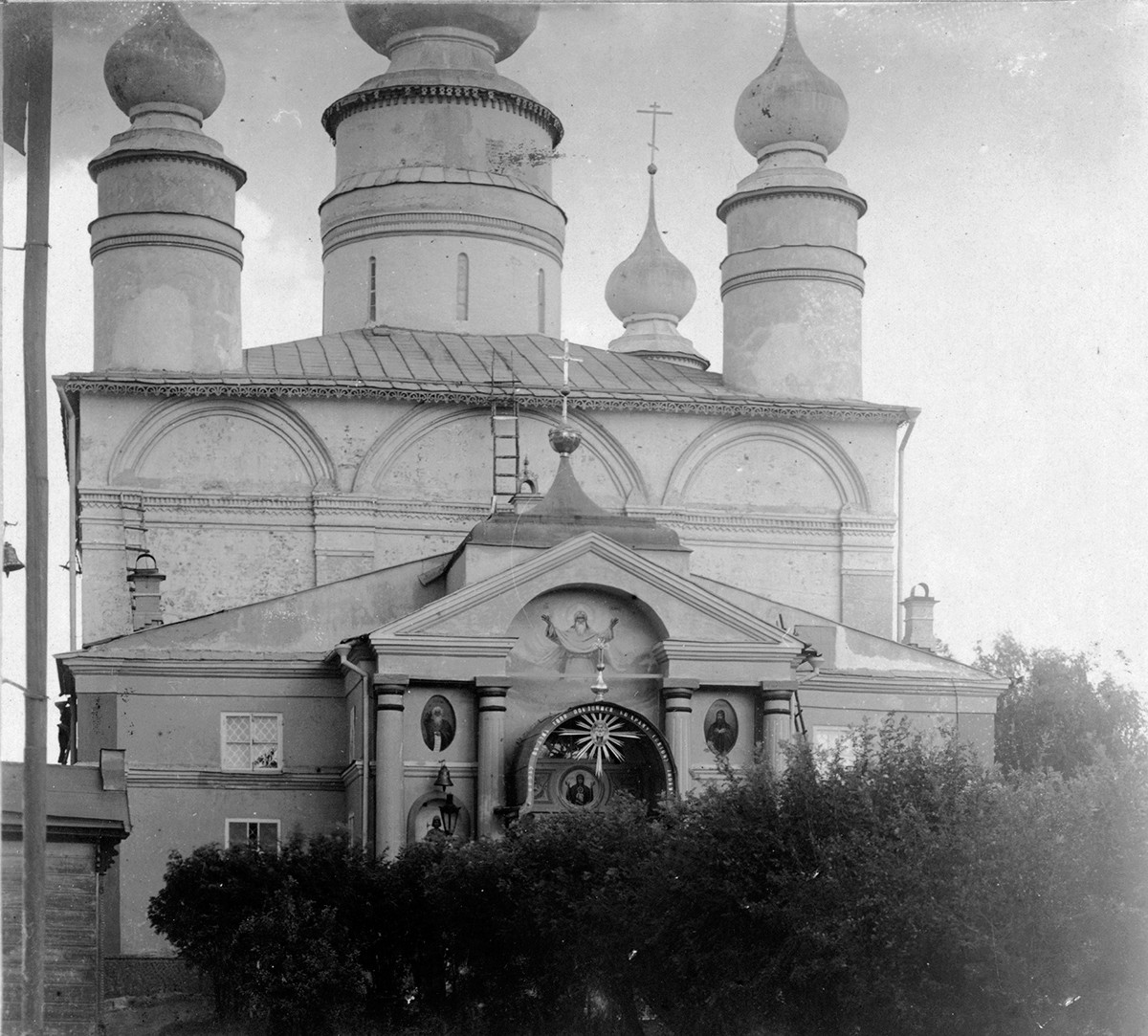 Cathedral of Sts. Boris & Gleb, west view. The flanking decorative wooden cupolas were placed on the roof in 1836 and removed in 1925 by the architect and preservation specialist Piotr Baranovsky. Summer 1911

Prokudin-Gorsky photographed it from a distance as part of the monastery ensemble as well as more closely from within the monastery. (The three-separation glass negative of the latter view has not survived, but a monochrome contact print that he made from the negative is in the Library of Congress collection.) My photographs, taken over a period from 1992 to 2019, show a closer perspective.

The austere cathedral edifice is attributed to master builder Grigory Borisov from nearby Rostov. It replaced a log church that had been erected over the graves of the monastery’s founders, the monks Fyodor and Pavel. As the log structure fell into disrepair, Basil III commanded that it be replaced and allocated funds in 1522 for the construction of a sizeable brick church. 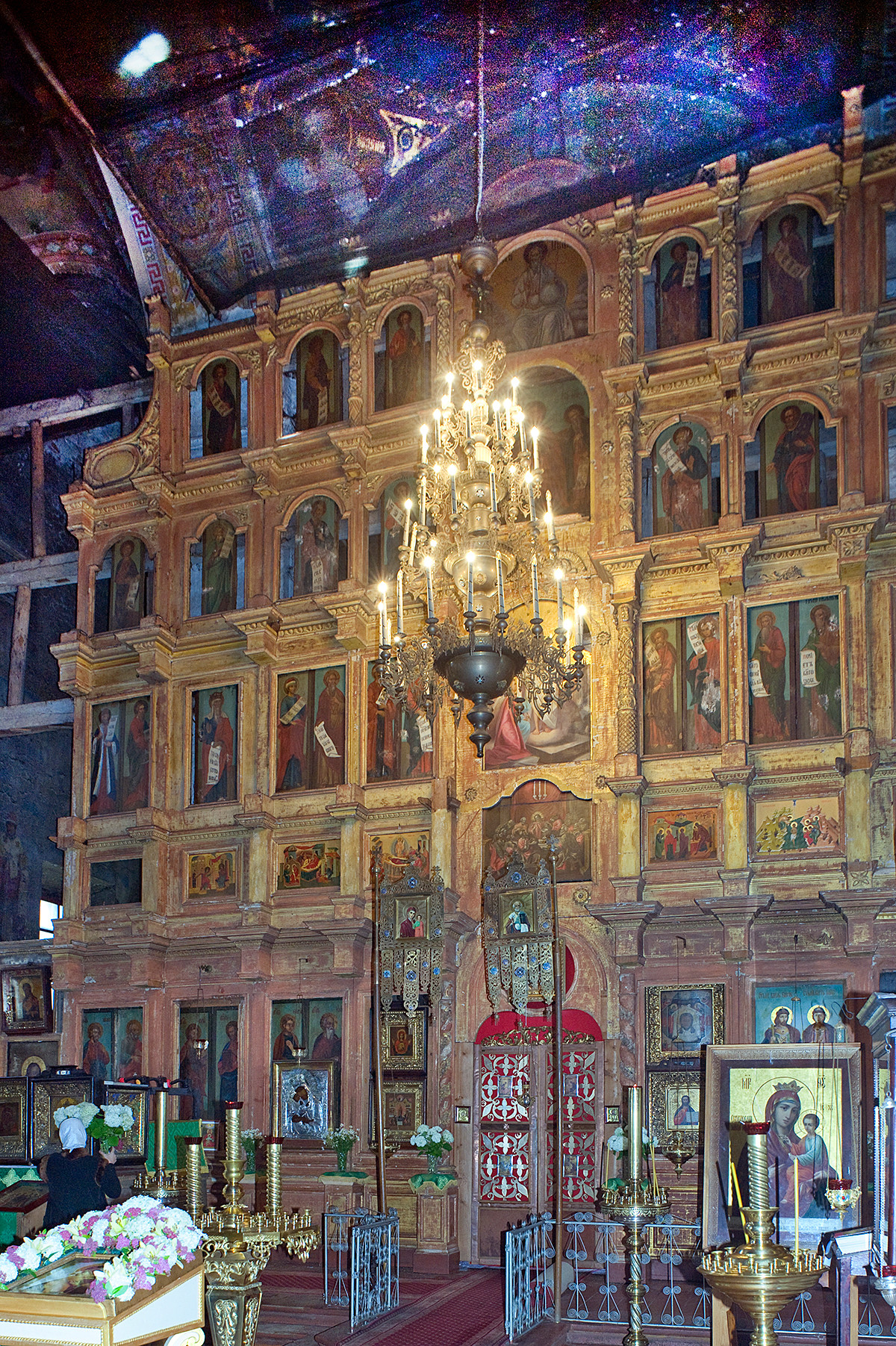 The walls of the structure were divided into three bays that culminated in curved gables. This graceful feature was leveled and replaced in 1780 by the four-sloped roof visible today. The cylinder supporting the cupola and the cupola itself were rebuilt in a different, heightened form in 1778, thus violating the original proportions. A further substantial change occurred in 1820, when the west façade and main entrance were obscured by the addition of a two-story neoclassical narthex containing a chapel dedicated to Elijah the Prophet. 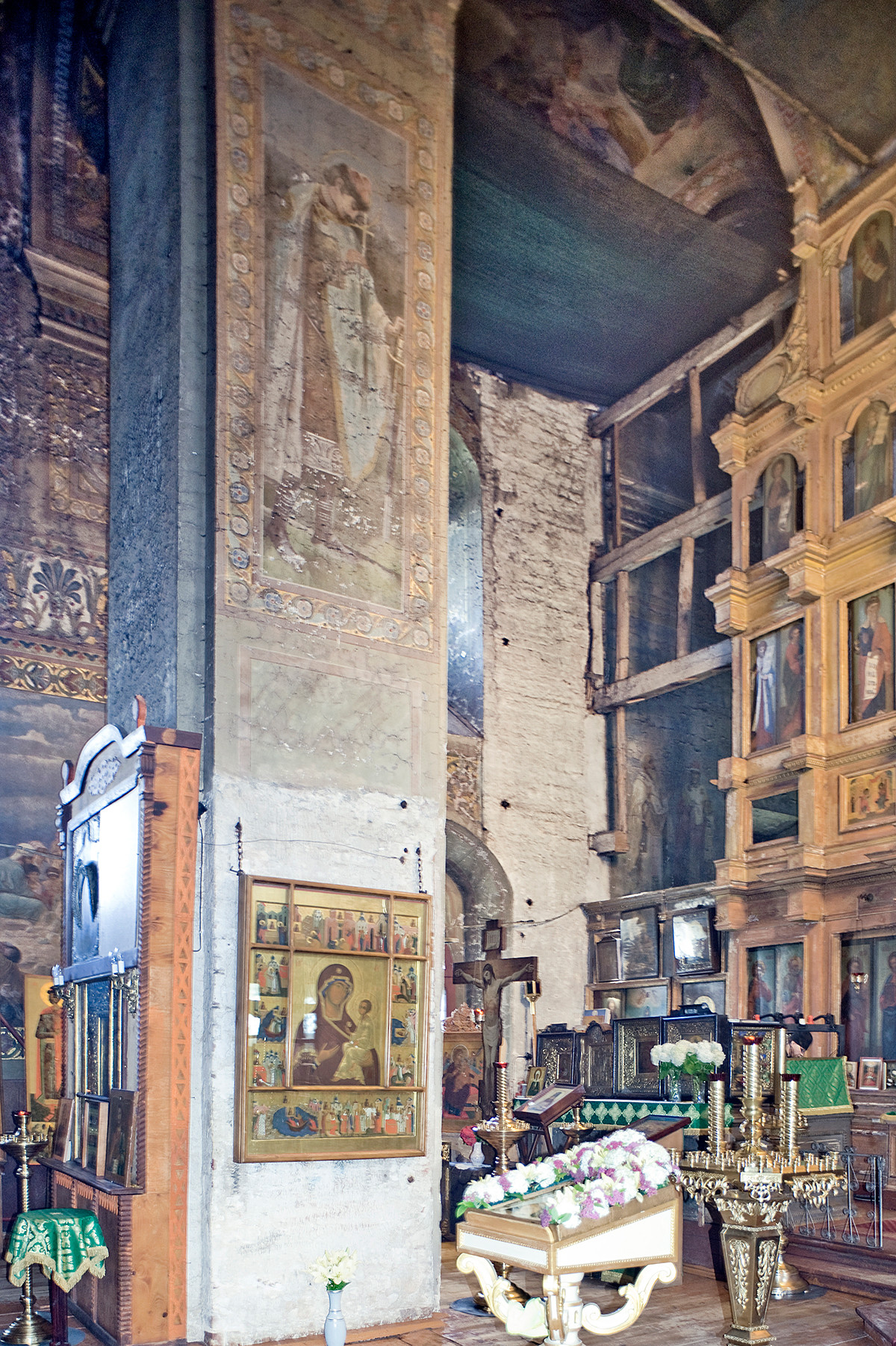 The cathedral interior is arranged around four massive piers that support the central ceiling vaults visible in my photographs from 2019. (Prokudin-Gorsky did not photograph inside the cathedral.) Natural light is limited by the narrow window slits in the walls and the cylinder supporting the central cupola. 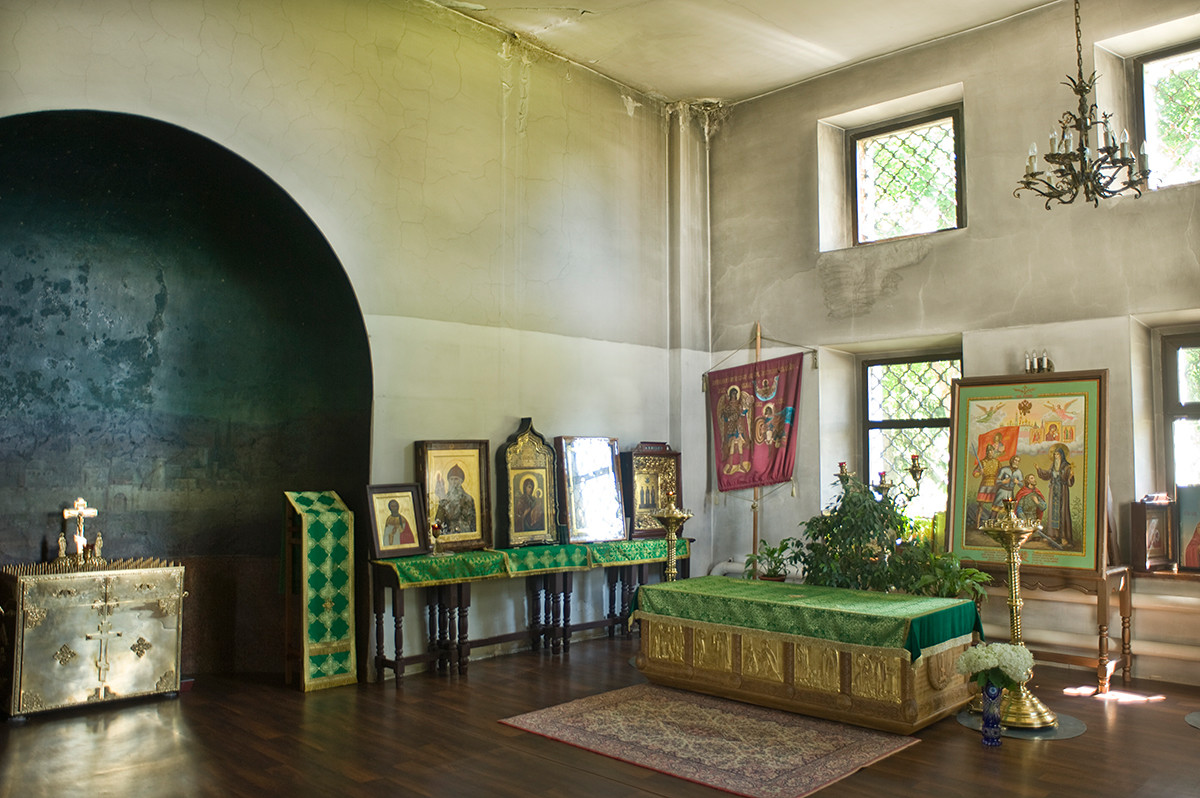 Despite the early patronage of Basil III, the Monastery of Sts. Boris and Gleb was not located in a major town and thus had fewer resources over the decades. Although restoration specialists have uncovered fresco fragments painted perhaps as early as the 16th century, there is no documentary evidence that the walls were painted in their entirety until 1783.

In 1905, the walls were repainted in oil colors by Fyodor Yegorov, who reproduced paintings by the renowned artist Viktor Vasnetsov for the Cathedral of St. Vladimir in Kiev. Those paintings are now being cleaned. The east part of the interior had a large icon screen, which is also being gradually restored after damage during the Soviet period. 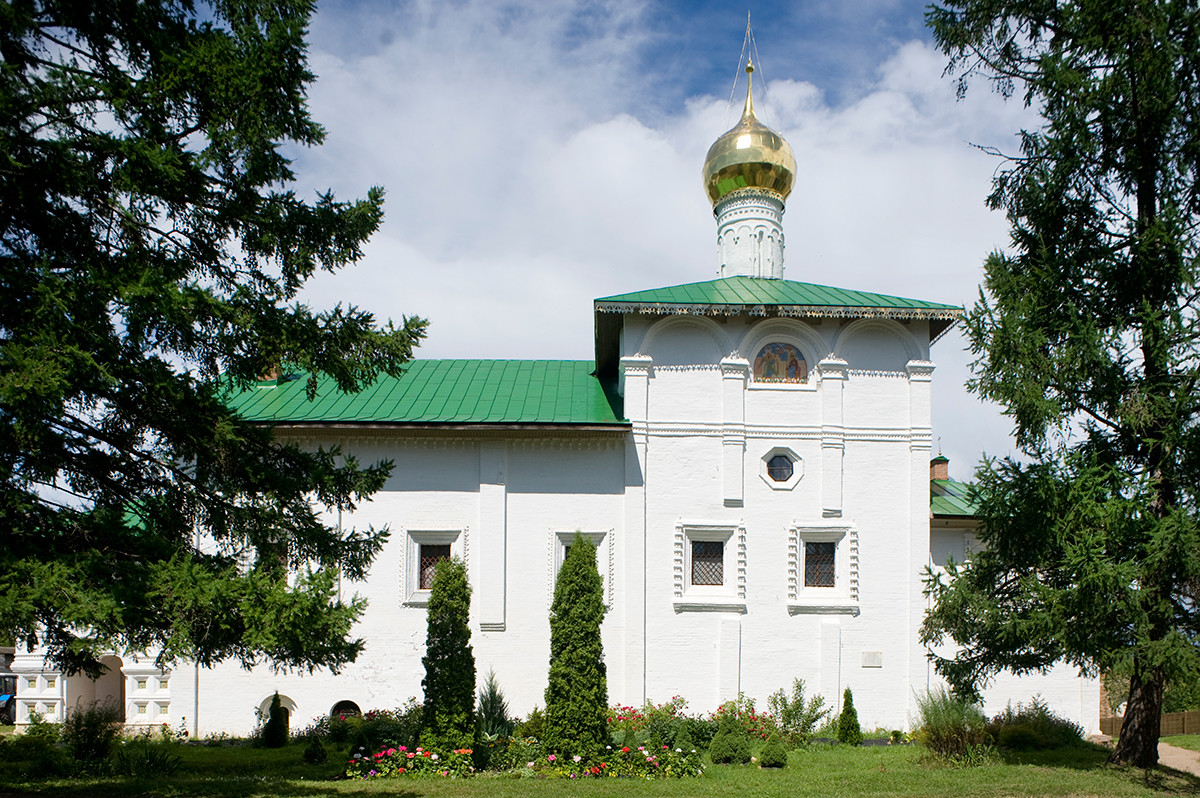 Just a few steps to the northwest of the cathedral is the refectory Church of the Annunciation, built two years later (1524-26) by Grigory Borisov with the support of Basil III. Its form reflects the Russian monastic tradition of attaching a refectory (dining hall) as an extension to the west side of a church. 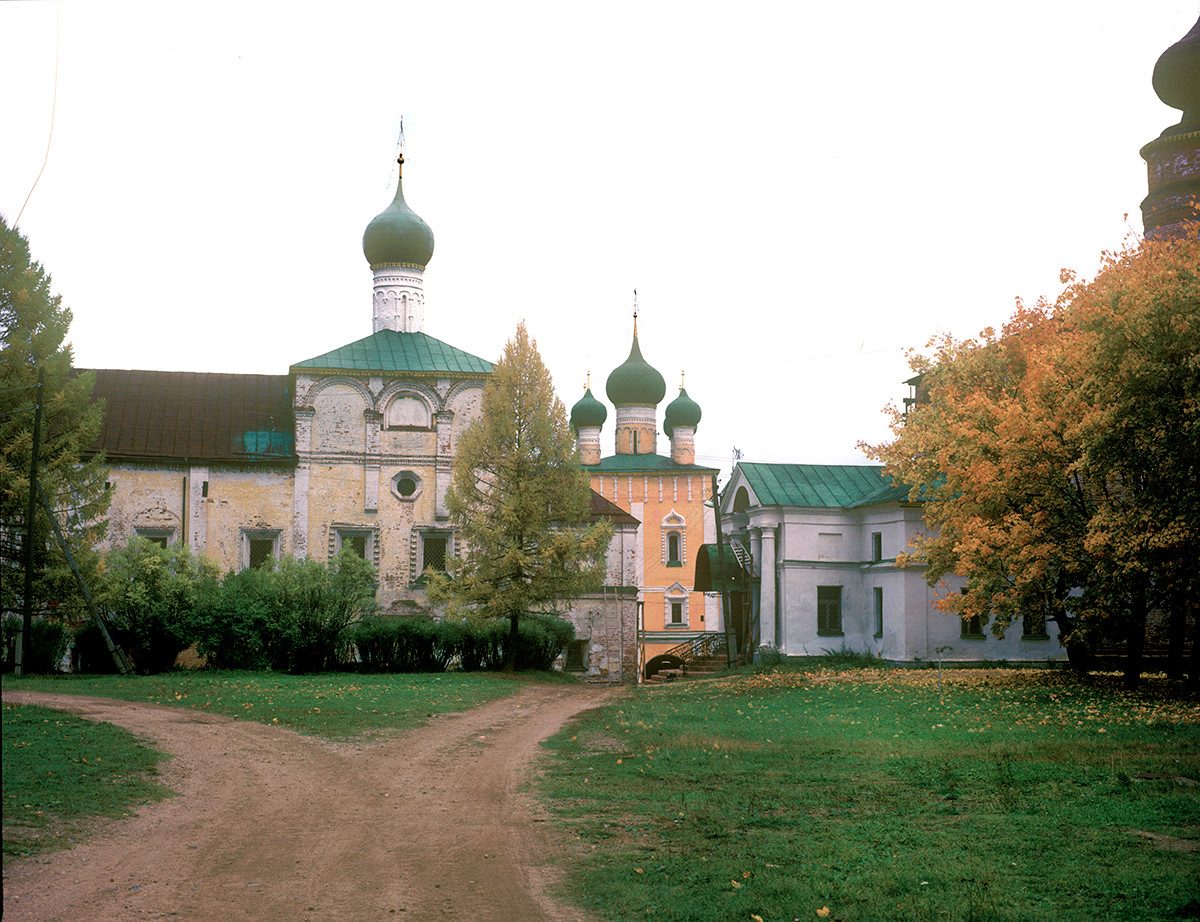 The main structure is a tall two-story block. As with the adjacent cathedral, the Annunciation Church’s walls originally culminated in graceful curved gables that were leveled and replaced with a four-sloped roof at the turn of the 18th century. The windows were also enlarged at this time. A single cupola resting on a decorative drum crowns the roof. The ground level was used for storage of food supplies for the scullery underneath the adjoining refectory. 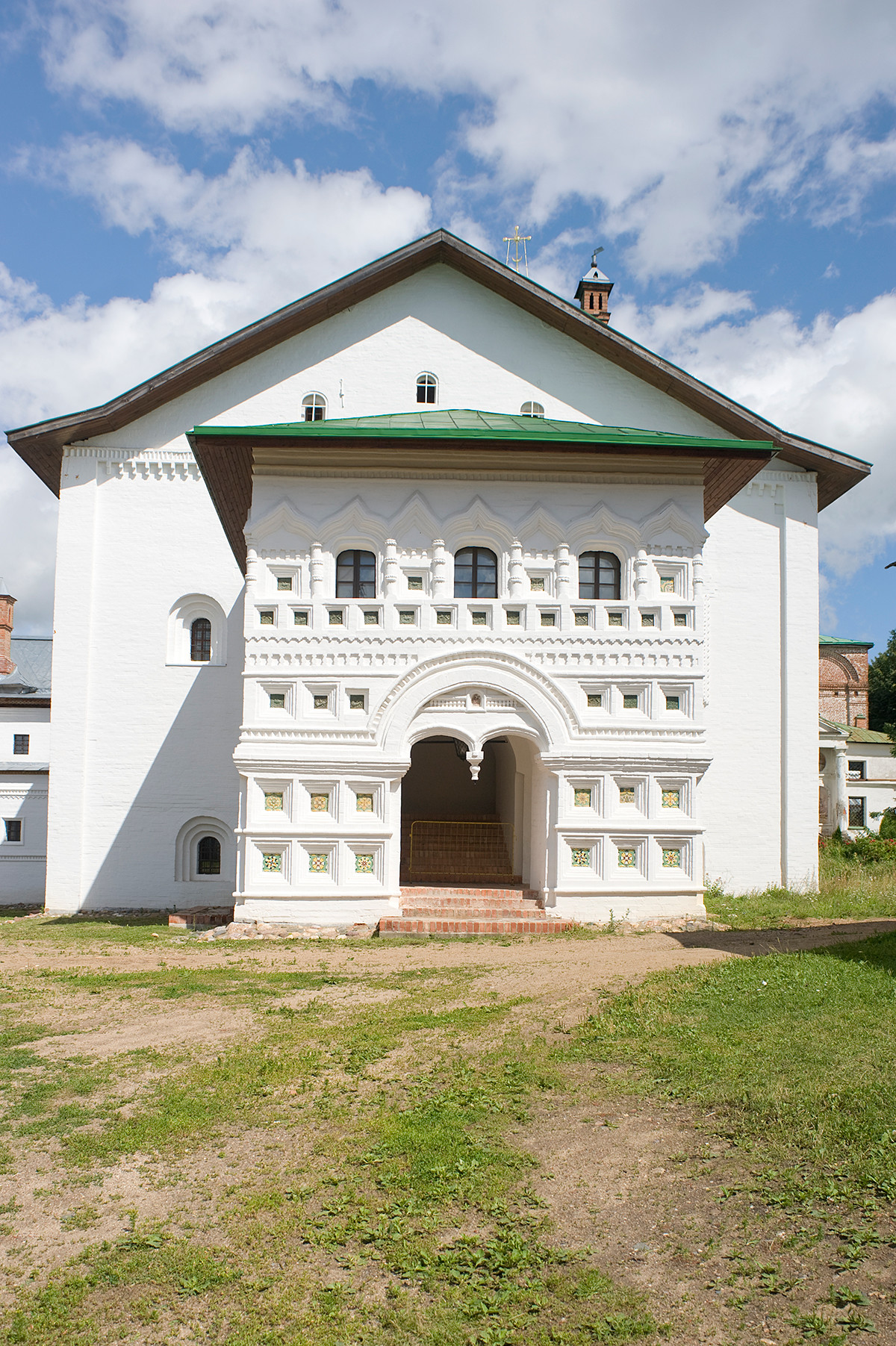 The compact church interior has no piers, and the ceiling vaults rest on the walls. There is no firm information about the painting of the interior, yet recent restoration uncovered fragments of a painting of the Virgin Mary that might be part of an “Annuncation”.

The dining hall has a thick central column typical of 16th and 17th-century monastic refectories. Its interior walls were painted in 1892 in the Palekh style and have been recently restored. 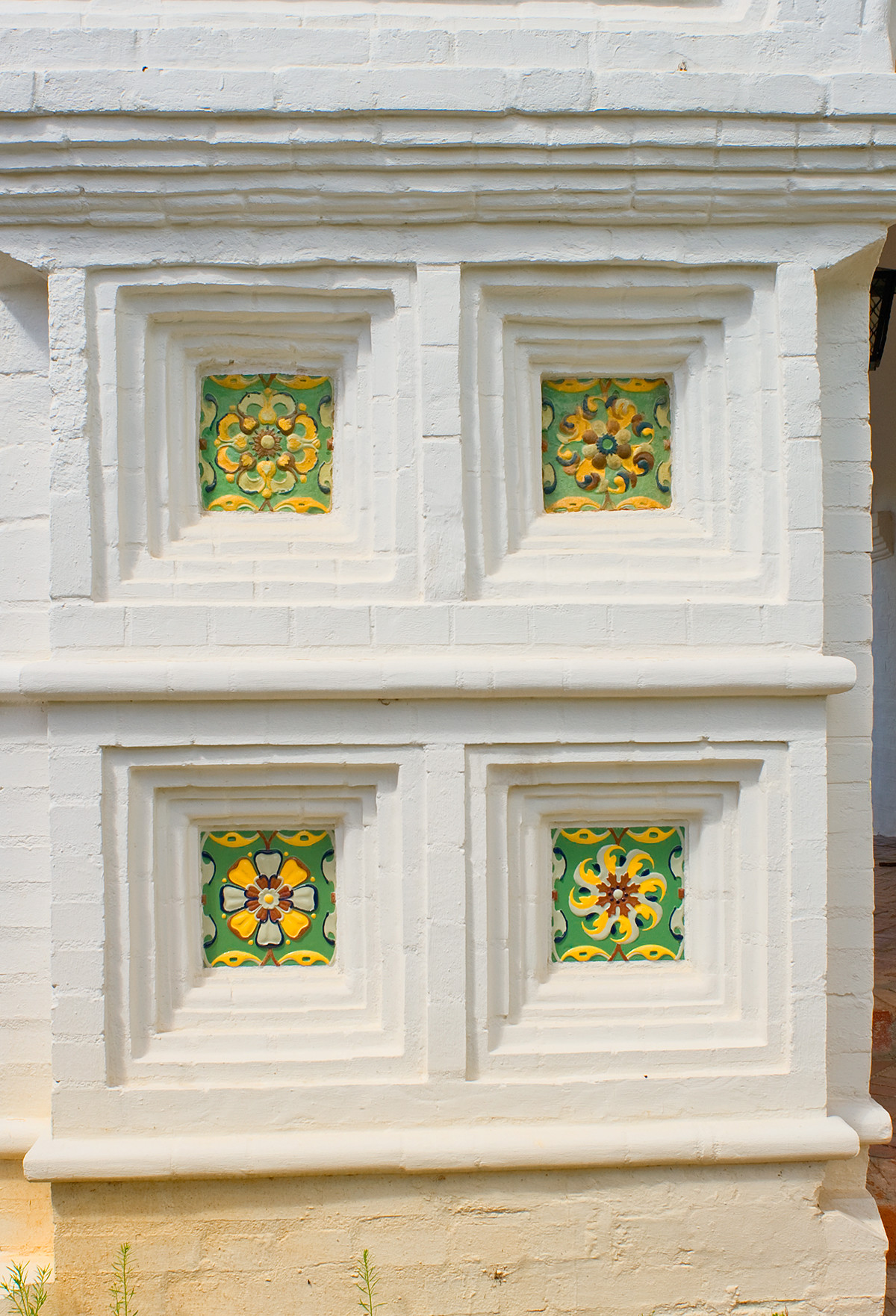 The north side of the church is obscured by a large extension begun in the 16th century and rebuilt in the 17th as the residence of the abbot. Although highly unusual, this solution has the logic of convenience, particularly in this severe climate.

The most curious feature of the Annuciation Church is the massive cuboid entrance porch and narthex added in 1695. Its walls are decorated with recessed squares (shirinki) encasing ceramic tiles. 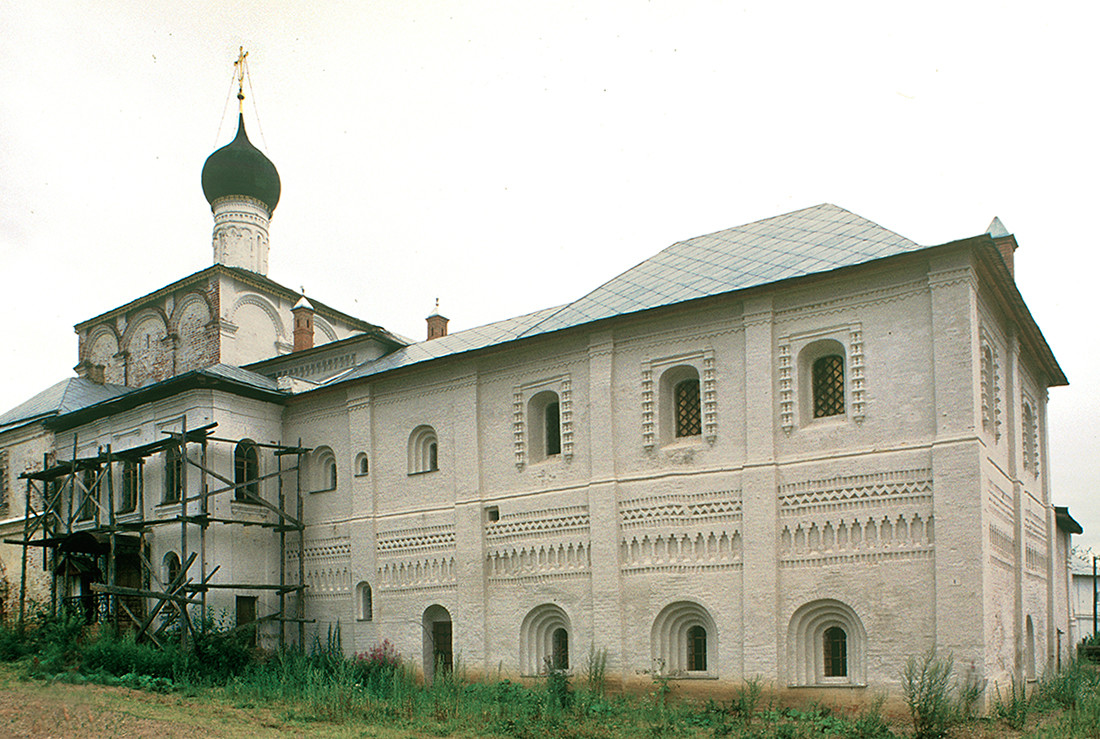 Basil’s son, Ivan the Terrible (1530-84), enhanced the monastery’s wealth and standing, but added no major structures. His reign unfortuately created massive upheavals whose ramifications extended into the early 17th century during a dynastic interregnum and national crisis known as the Time of Troubles.

During these dramatic events the Monastery of Sts. Boris and Gleb achieved its greatest renown through the life of a monk known as Irenarch, the Recluse of Rostov (1547-1616). His remains now rest in the cathedral narthex. 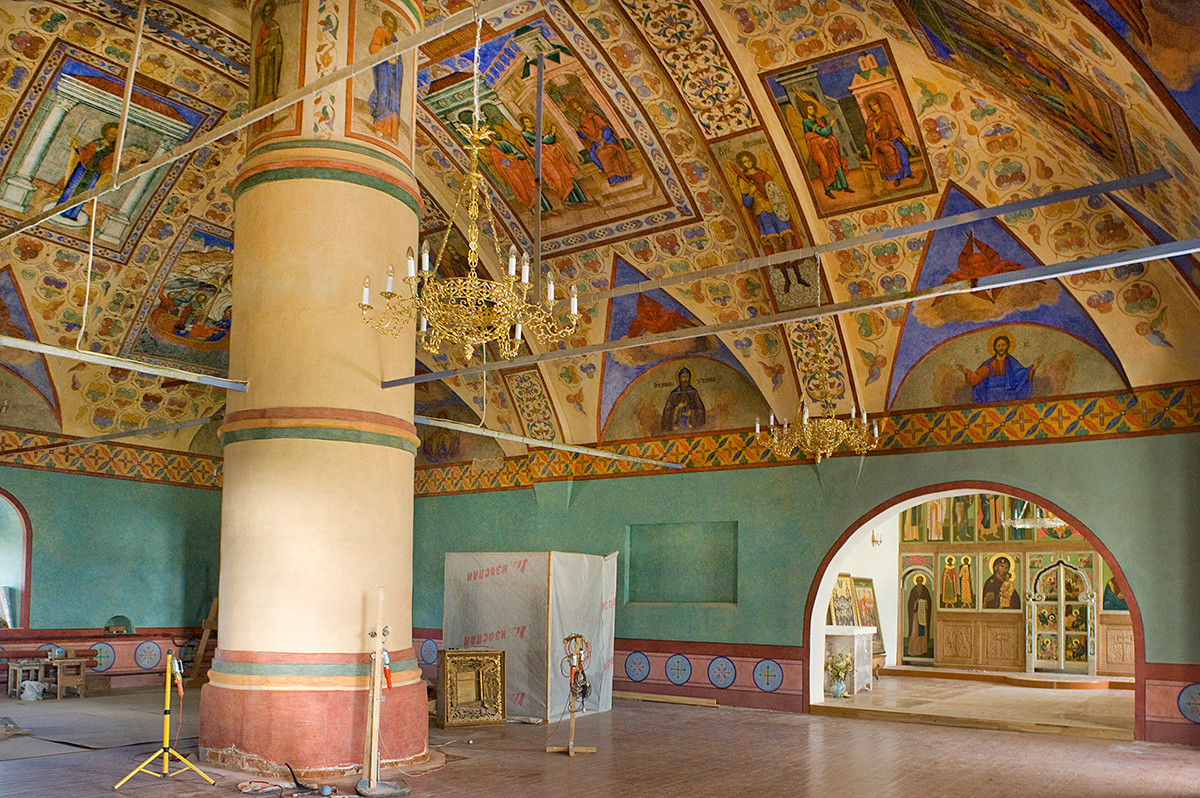 The final major phase of construction at the Monastery of Sts. Boris and Gleb occurred in the late 17th century under the patronage of the church prelate Metropolitan Jonah (Sysoevich), who had built so much in neighboring Rostov. As would be expected, the architecture owes much to the style of the “Rostov Kremlin” (Archbishop’s Court). 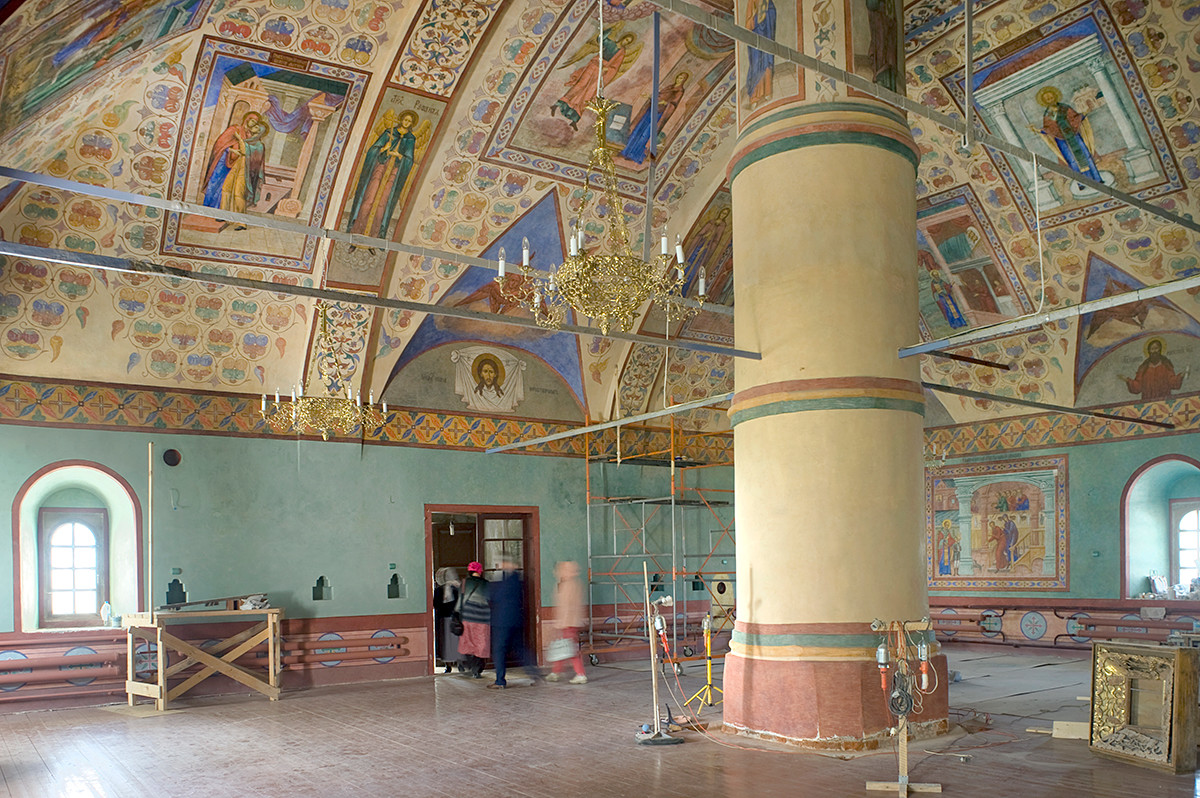 During the reign of Peter the Great, building resources were directed to the new city of St. Petersburg, and much monastic wealth was confiscated. This process continued with the secularization of monastic lands by order of Catherine the Great, who gave this monastery’s primary holdings to Prince Grigory Orlov. The status of the Monastery of Sts. Boris and Gleb was substantially reduced, although it remained a pilgrimage site throughout the 19th century and early 20th, when Prokudin-Gorsky visited.

Closed in 1924, the Monastery of Sts. Boris and Gleb survived as an architectural ensemble largely through its conversion to a local history museum. Seventy years later, in 1994, parts were returned to the Russian Orthodox Church, which now has possession of the entire ensemble. The prolonged, complicated process of restoration continues to the present. 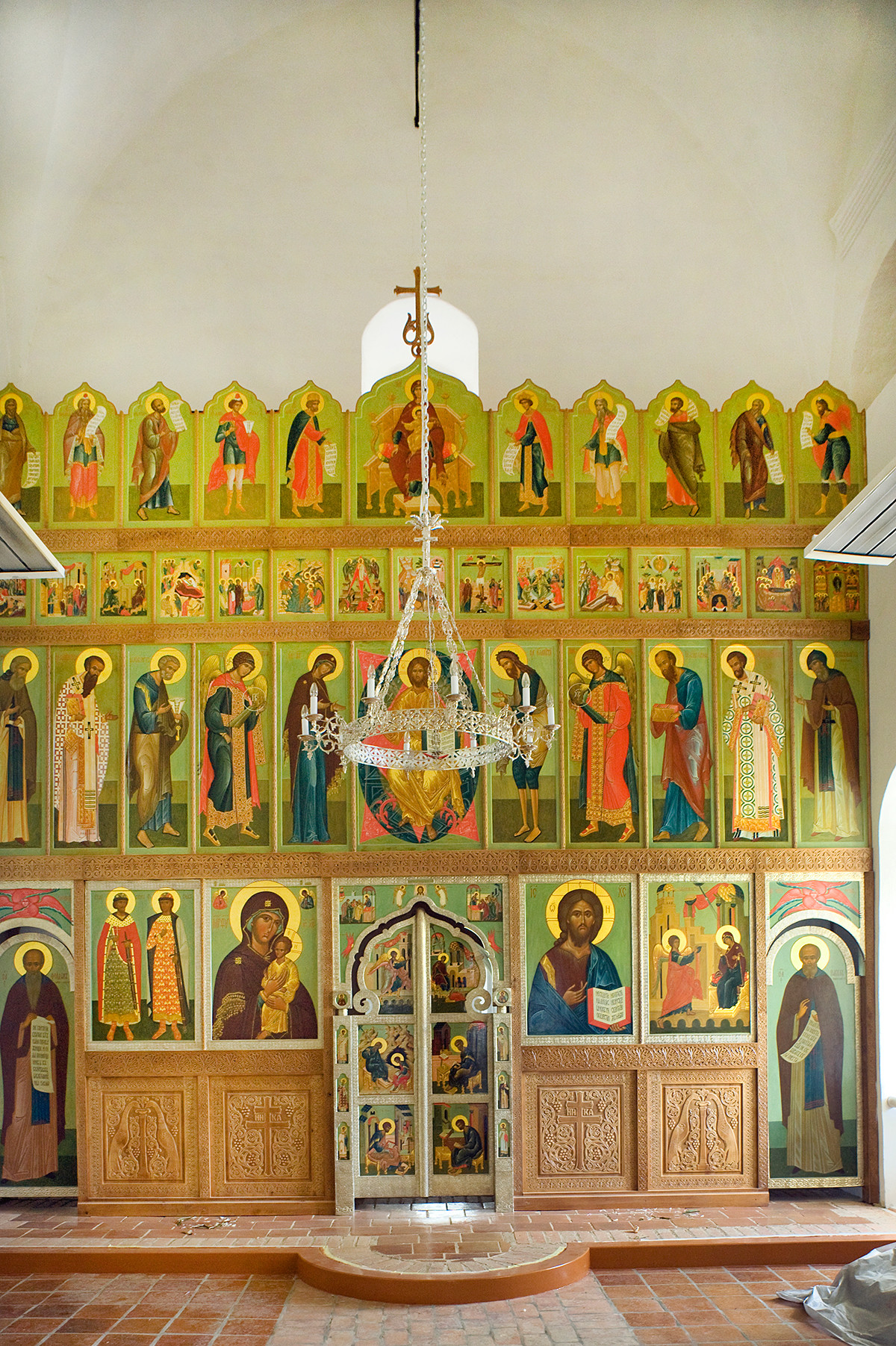