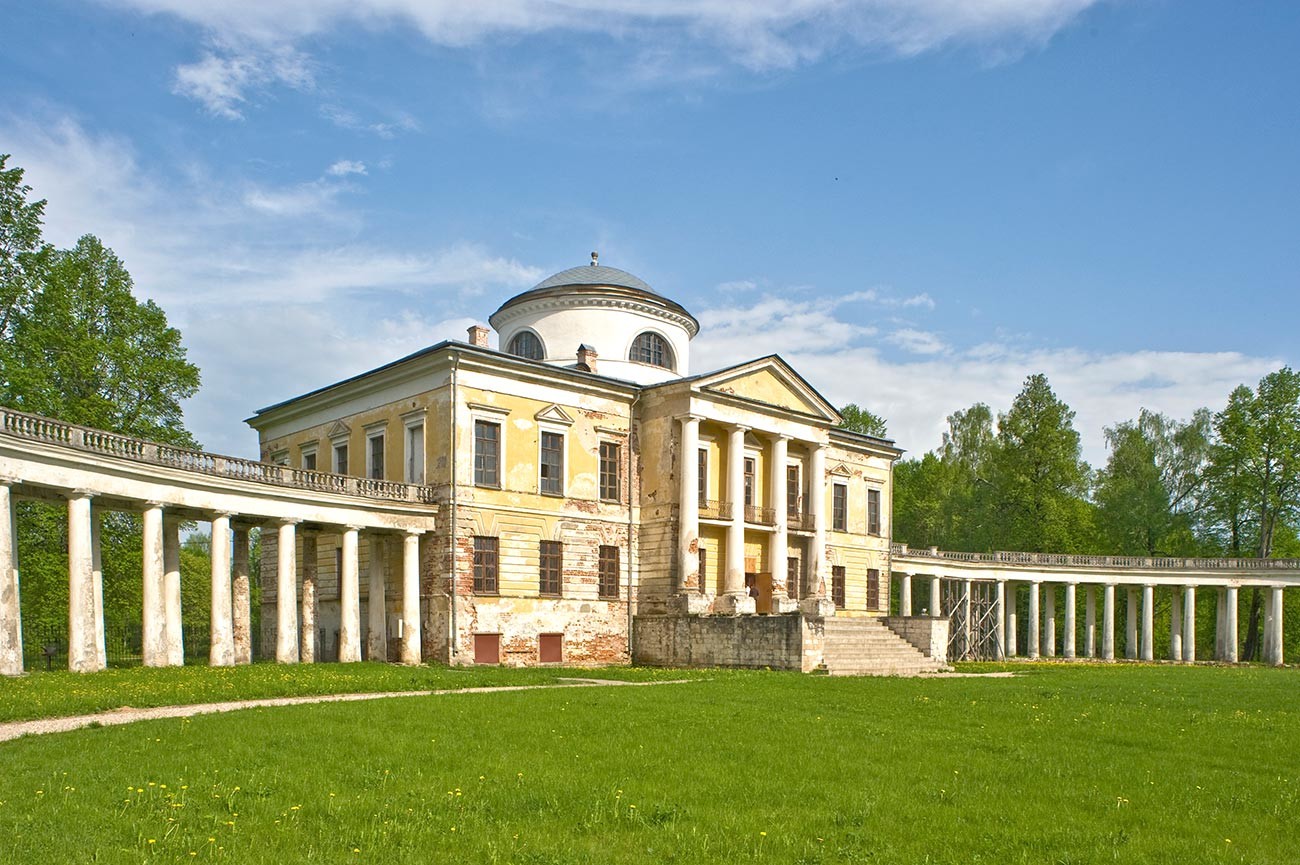 Situated some 35 miles to the west of the city of Tver and near the mid-point of the highway between Moscow and St. Petersburg, Torzhok is among the oldest settlements in central Russia. The earliest recorded mention appears in an ancient chronicle under the year 1139, earlier than the putative founding date of Moscow (1147). In the summer of 1910, Russian chemist and photographer Sergey Prokudin-Gorsky (see box text below) visited Torzhok as part of his journeys in the upper Volga area. My several visits occurred between 1995 and 2010. 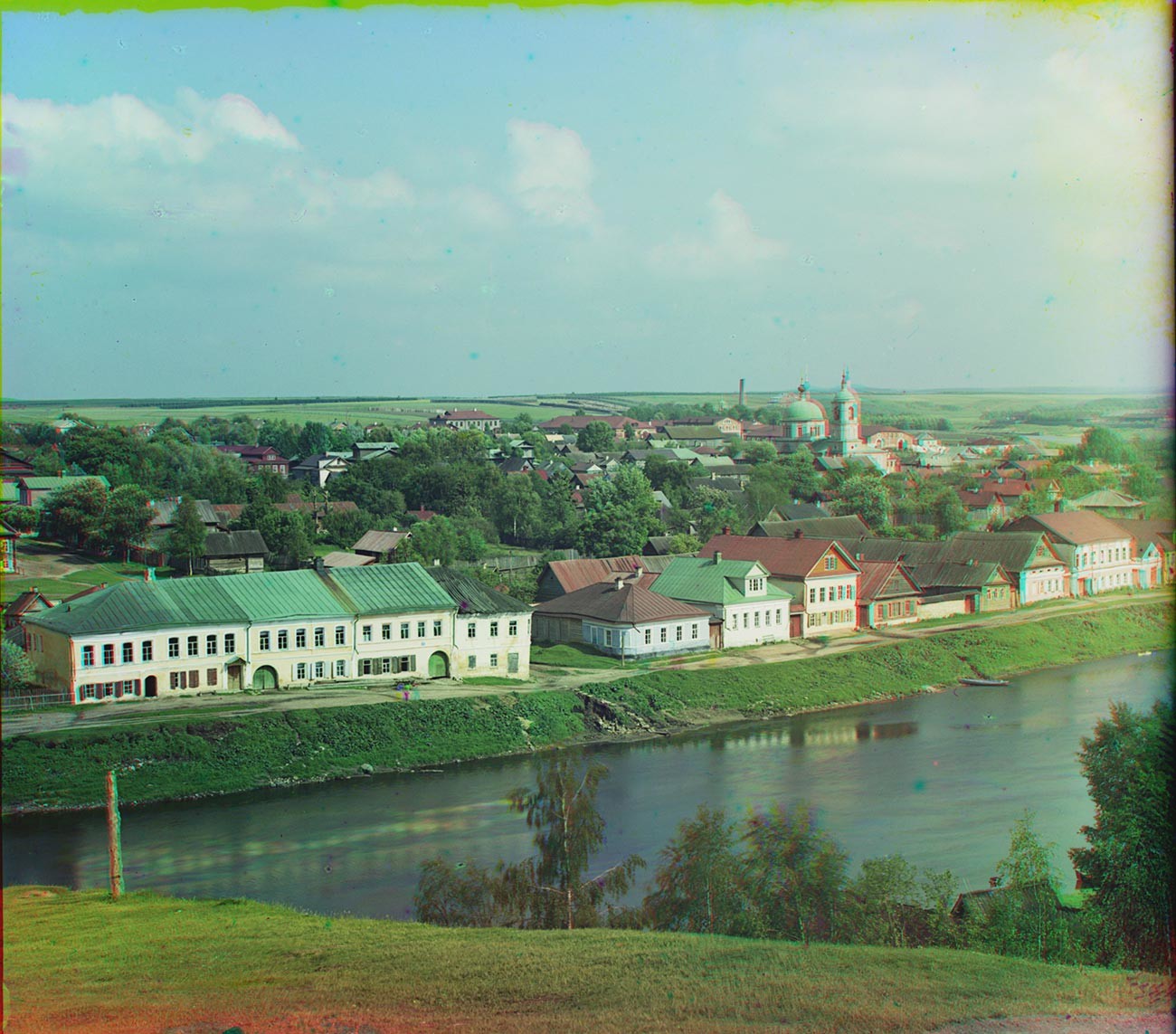 Important in the medieval period as a trading center and strategic prize fought over by warring principalities, Torzhok benefited in the 18th century from the growth of the imperial capital of St. Petersburg. Thanks to its advantageous location, Torzhok not only played a role supplying the new capital, but also served as an oasis of hospitality for many traveling between it and Moscow. 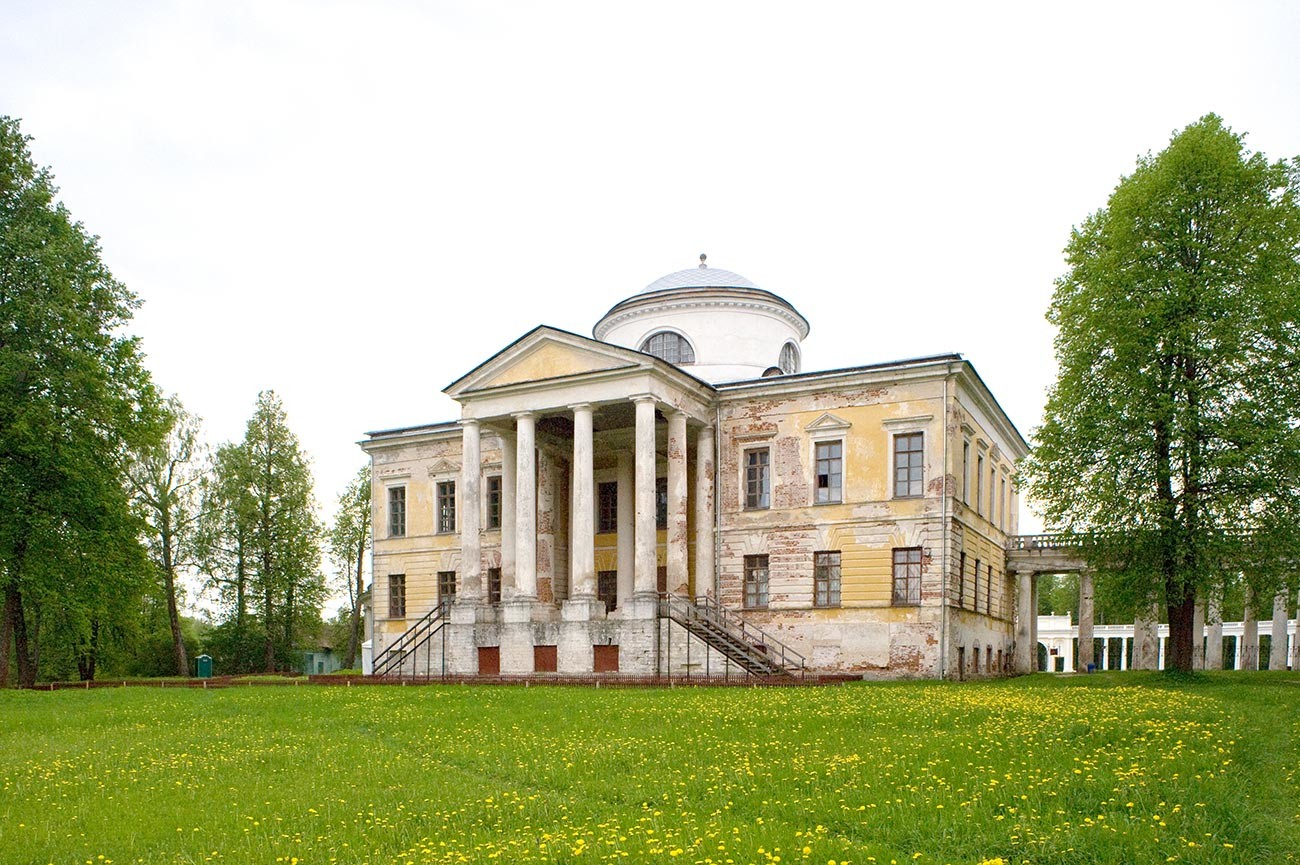 Torzhok was appealing as a center for the nobility passing through as well as those who settled on the region’s fertile estates. The increase in privileges for the elite stratum of nobility during the reign of Catherine the Great led to the expansion of enserfed peasant labor and the creation of large landholdings with imposing mansions.

One of the grandest of these estates still stands at the village of Rayok (Ra-YOK), close to the Moscow-St. Petersburg highway just 9 miles to the south of Torzhok. The estate, formally known as Znamenskoye-Rayok, includes a landscaped park extending to the small Logovezh River. 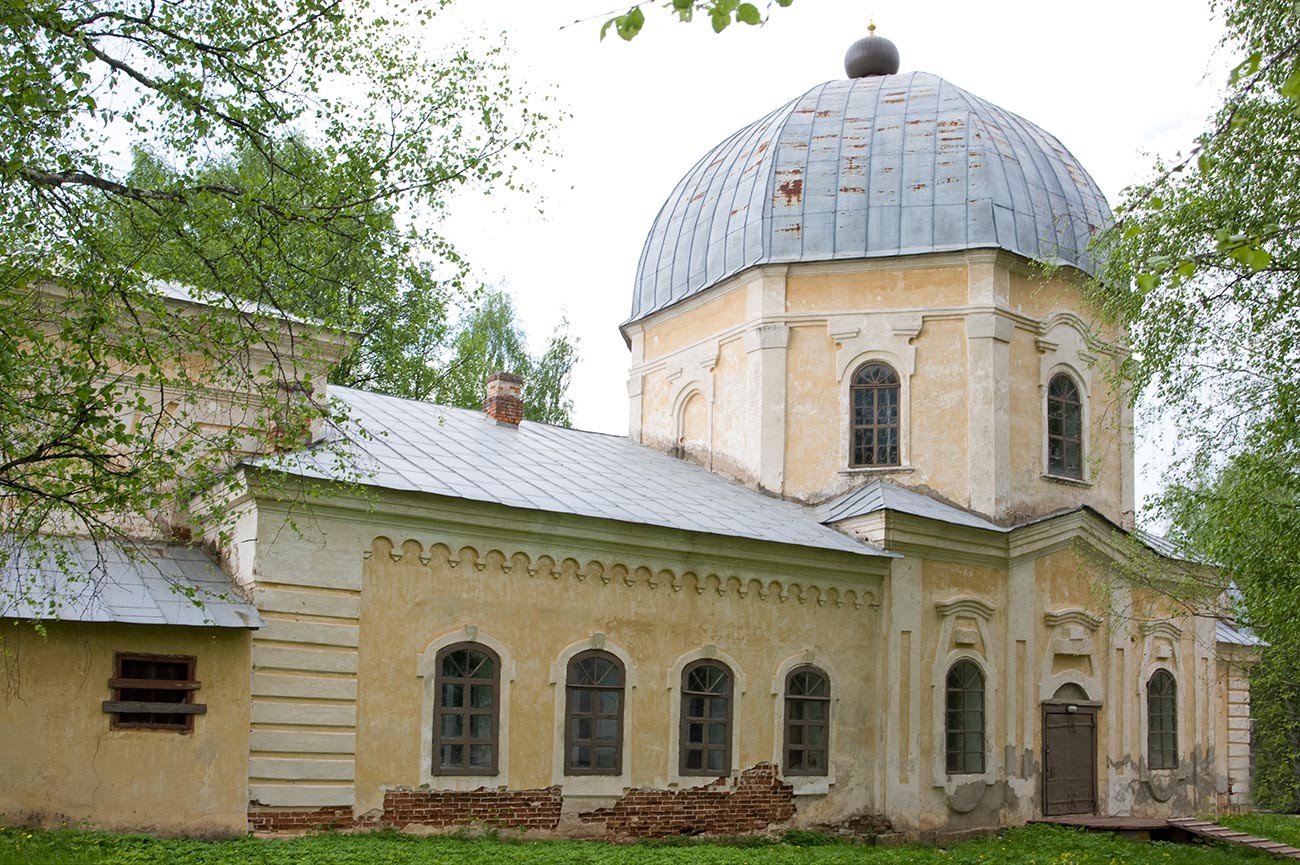 A sweeping view taken by Prokudin-Gorsky from the bell tower of the Sts. Boris and Gleb Monastery shows the Moscow road and the terrain on which the estate was located. The verdant land captured in Prokudin-Gorsky’s view suggests a commonly accepted explanation for the village name, related to the Russian word “rai” (paradise).

The origins of the Rayok estate date to the 17th century, but its rise to prominence began in the mid-18th century, when its land belonged to General Ivan Glebov (1707-74), scion of one of the most prominent Russian noble dynasties. Through his military service, Glebov brilliantly fulfilled the ethos of noble dedication to the state inculcated by Peter the Great. 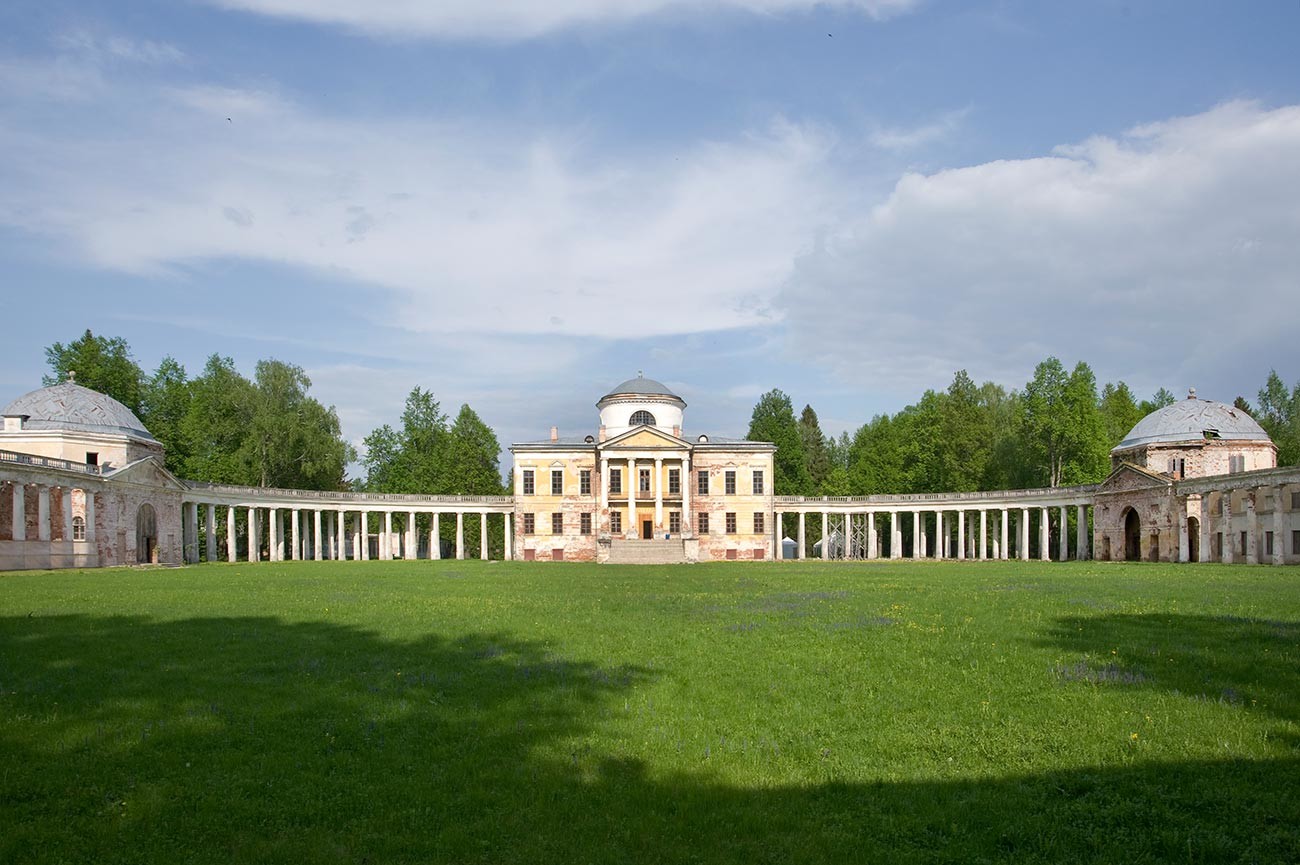 During the Seven Years War (1756-63), Glebov was responsible for major developments in Russian artillery in the Prussian campaign. Toward the end of his life, he attained a lofty position in Catherine’s administration, including being governor-general of Kiev in 1762-64. His career culminated with his appointment as senator in 1766 and service as governor-general of St. Petersburg in 1767.

The earliest written reference to the Rayok estate dates to 1746 in connection with the possible replacement of a wooden Church of the Icon of the Sign (Znameniye), which provides the first part of the village’s name – “Znamenskoye.” Ivan Glebov petitioned to begin construction on the property and the request was approved in 1759, but his military and state service left little time for this estate, so work on the charming baroque church proceeded slowly. Two altars (dedicated to the St. Nicholas and to the Three Prelates) were consecrated in the uncompleted structure in 1766, and the main altar (Znamenie) was consecrated only in 1770. 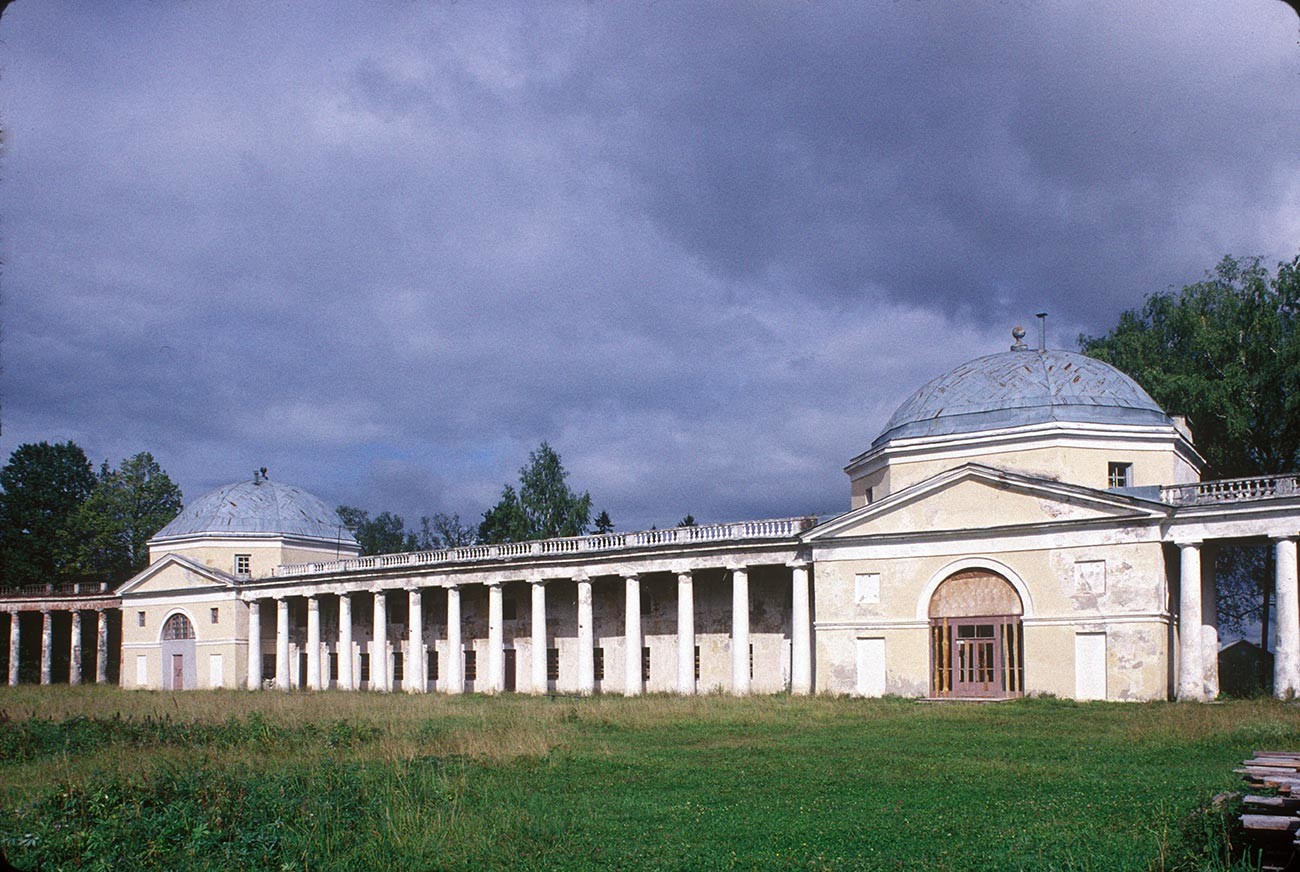 In 1772, Ivan Glebov’s wife, Praskovye, entered a convent. Shortly thereafter, he made a will that left the Rayok estate to his second son, Fyodor (1734-99), who had served in the artillery under his father in Prussia during the Seven Years War and subsequently achieved distinction during the Russo-Turkish War of 1768-74.

Fyodor Glebov’s career initially left little time for the provincial estate. After the death in 1769 of his first wife, Princess Alexandra Dashkova, he fell in love with Elizabeth Streshneva (1751-1837). Her father, General Peter Streshnev, opposed the union because of the 17-year difference in ages between Glebov and his daughter, but Glebov persisted, and the two were married the year after Streshnev’s death in 1771. 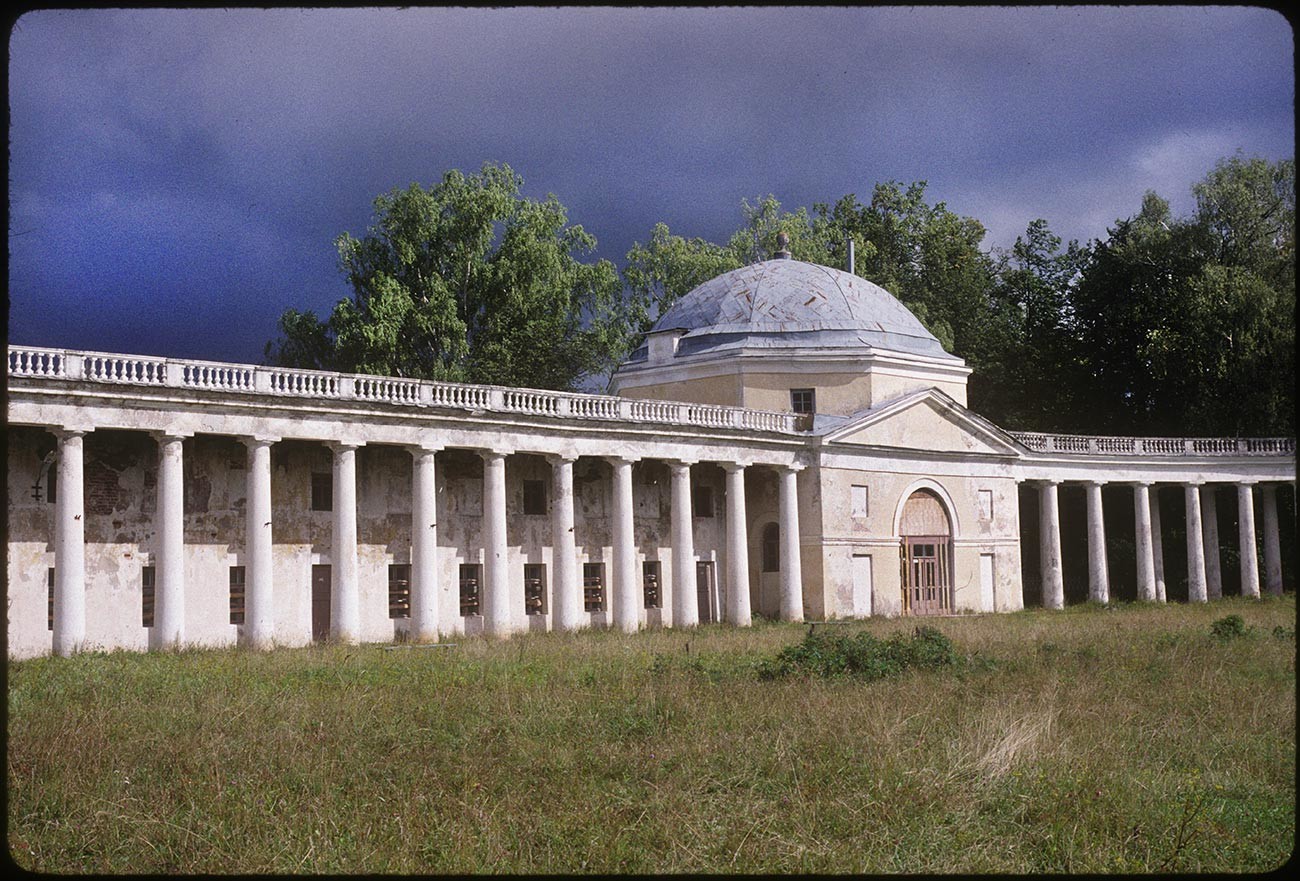 Doted upon by both her father and husband, Elizabeth cut a wide swath in the society of Moscow and St. Petersburg. At the same time, Fyodor Glebov—like his father—was appointed a senator (1781) and rose to the rank of full general in 1782.

During the latter part of the 1780s, Glebov turned his attention to the Rayok property, where he intended to create a luxurious environment for his beloved Elizabeth. By virtue of its location near the main highway, they would be able to receive important guests (Catherine the Great is said to have stayed there on an unofficial visit) and still live in an idyllic retreat. 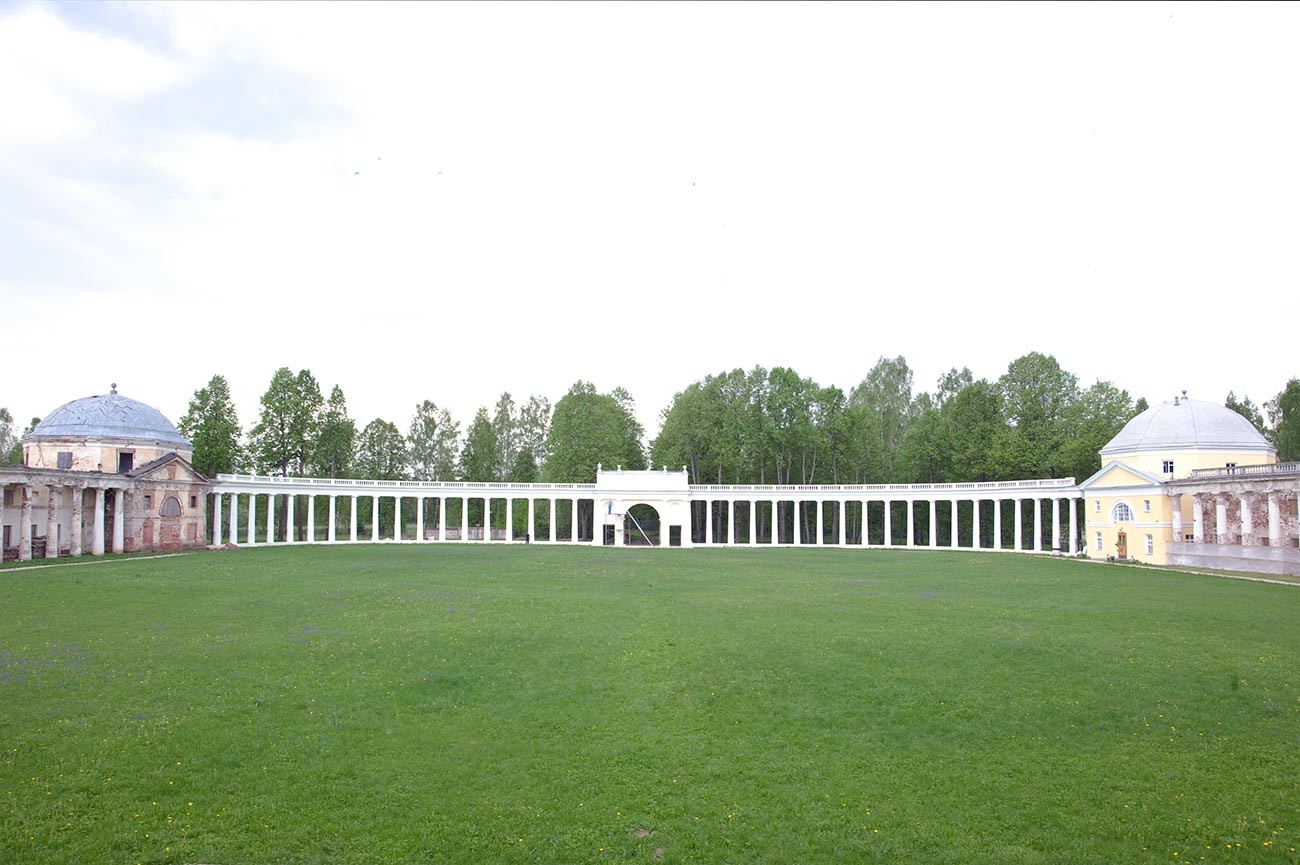 For a decade beginning in 1787 the Rayok estate was the scene of intensive construction. Glebov apparently gave the renowned architect Nikolai Lvov full rein for a mansion in the Italian style created by the 16th-century architect Andrea Palladio. (No documentary evidence has been found to substantiate Lvov’s authorship, but he worked in neighboring Torzhok, and the style is inimitably his.) For almost 12 years, work on the estate was supervised by the Torzhok architect Franz Butsi.

Like the other major Palladian architects in Russia, Giacomo Quarenghi and Charles Cameron, Lvov was interested primarily in Palladio's "rural" architecture, which consisted of sublime villas. At Rayok, the Italian style is particularly evident in the rotunda that rises above the two-story mansion. 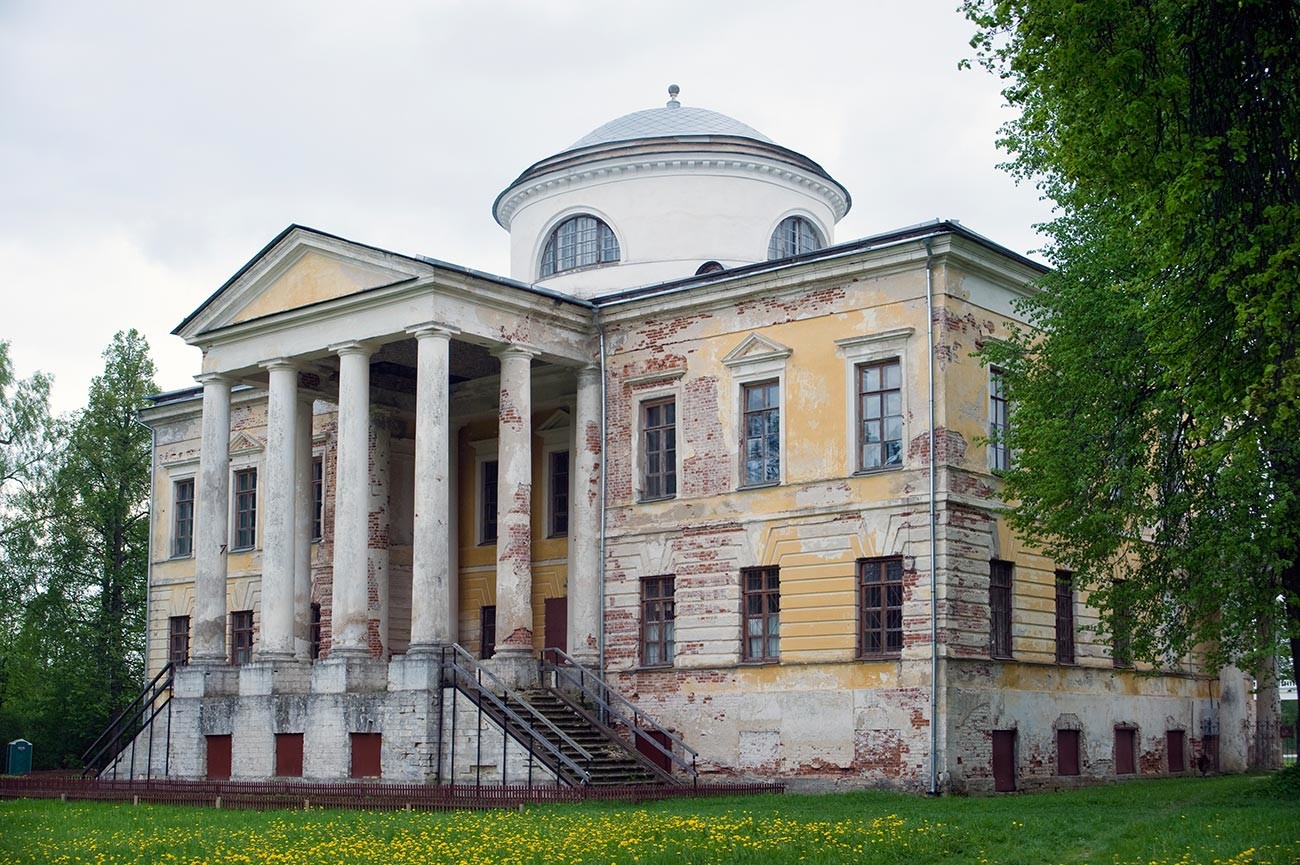 On the interior, the rotunda provides natural light for the ballroom at the center of the second (main) floor. All flanking rooms are subordinate to this square central space – a clear indication of the house's purpose as a center of reception and entertainment.

The most distinctive feature of this Palladian masterpiece is a colonnade of 136 columns that encloses the cour d'honneur in front of the house. It is flanked on either side with pavilions and service buildings that are closely integrated into the colonnade. The center of the colonnade opposite the mansion is a monumental entrance arch that opens into a lush natural landscape. There is nothing else quite like it in Russia.

Fusion of architecture and nature 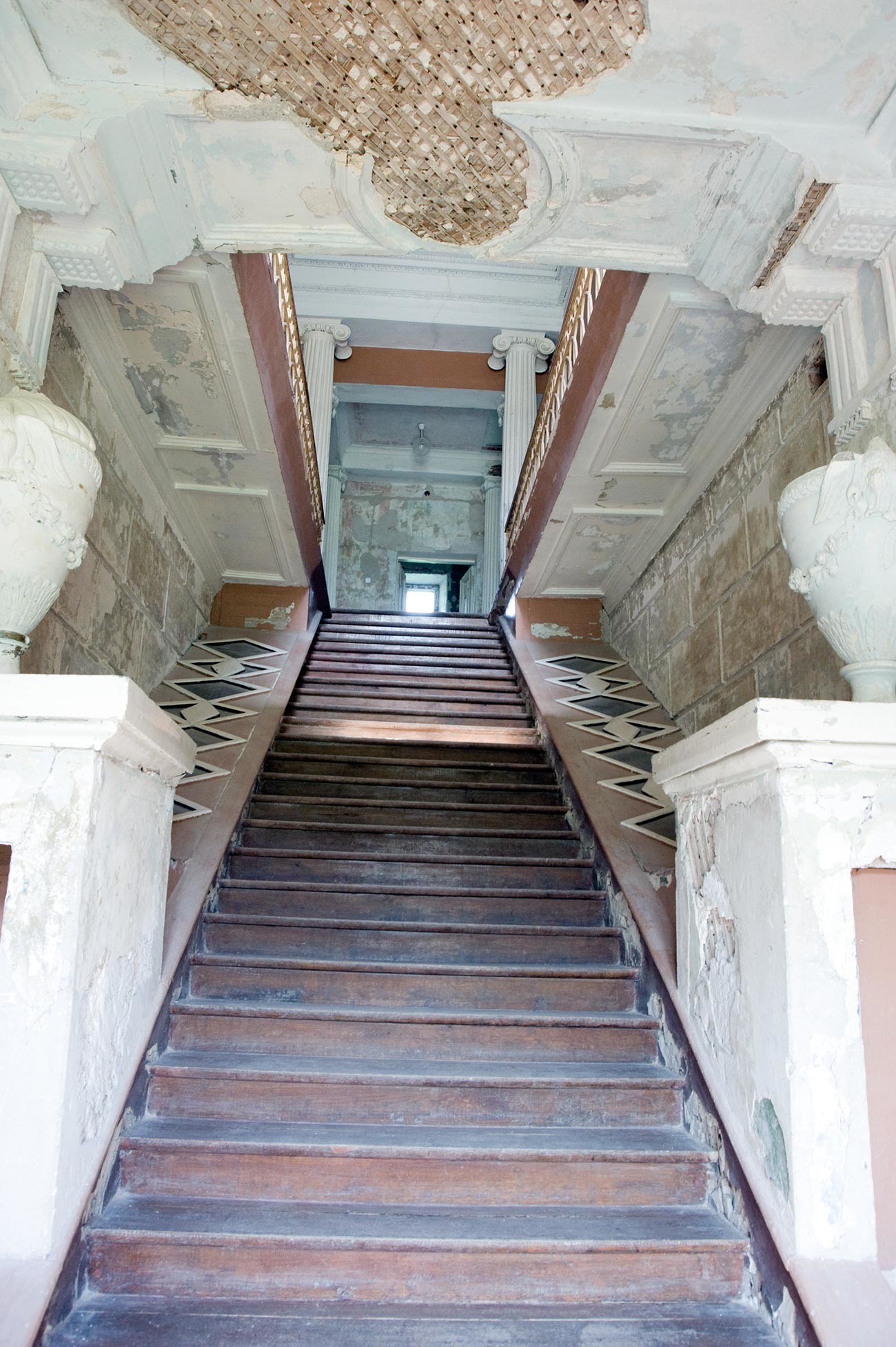 At Znamenskoe-Rayok, Lvov created a distinctive approach for the integration of the natural setting with the architectural forms of the neoclassical mansion and its auxiliary buildings. The concept of landscape design centered on the contemplation of "unfettered" nature, whose eternal laws were meant to complement the natural logic and meaning of classical architecture.

The colonnade enables that union by providing forest vistas through the classical entrance arch and the colonnade itself, a rare achievement through which artifice and nature are both delineated and at the same time fused. 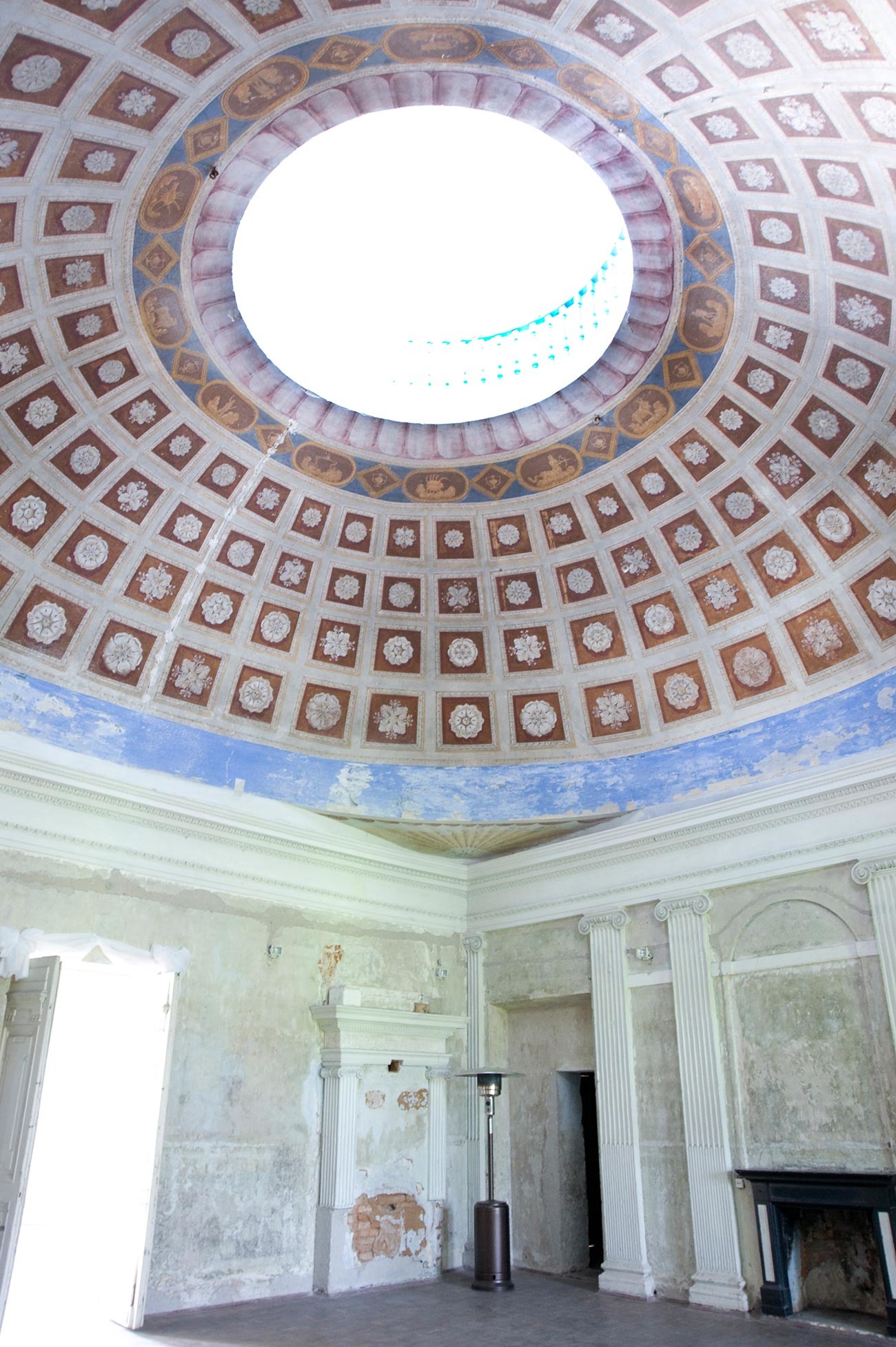 Sadly, Fyodor Glebov died a year after the completion of the mansion, and Elizabeth returned to her beloved Moscow estate of Pokrovskoe-Streshnevo. Elizabeth outlived her husband by nearly four decades and was well known for her imperious yet sentimental manner.

Because of the lack of male heirs in the final branch of the Streshnev clan, Elizabeth successfully petitioned Tsar Alexander I in 1803 to join her family name to Glebov’s. Henceforth the family name became Glebov-Streshnev.

Remains of past glory 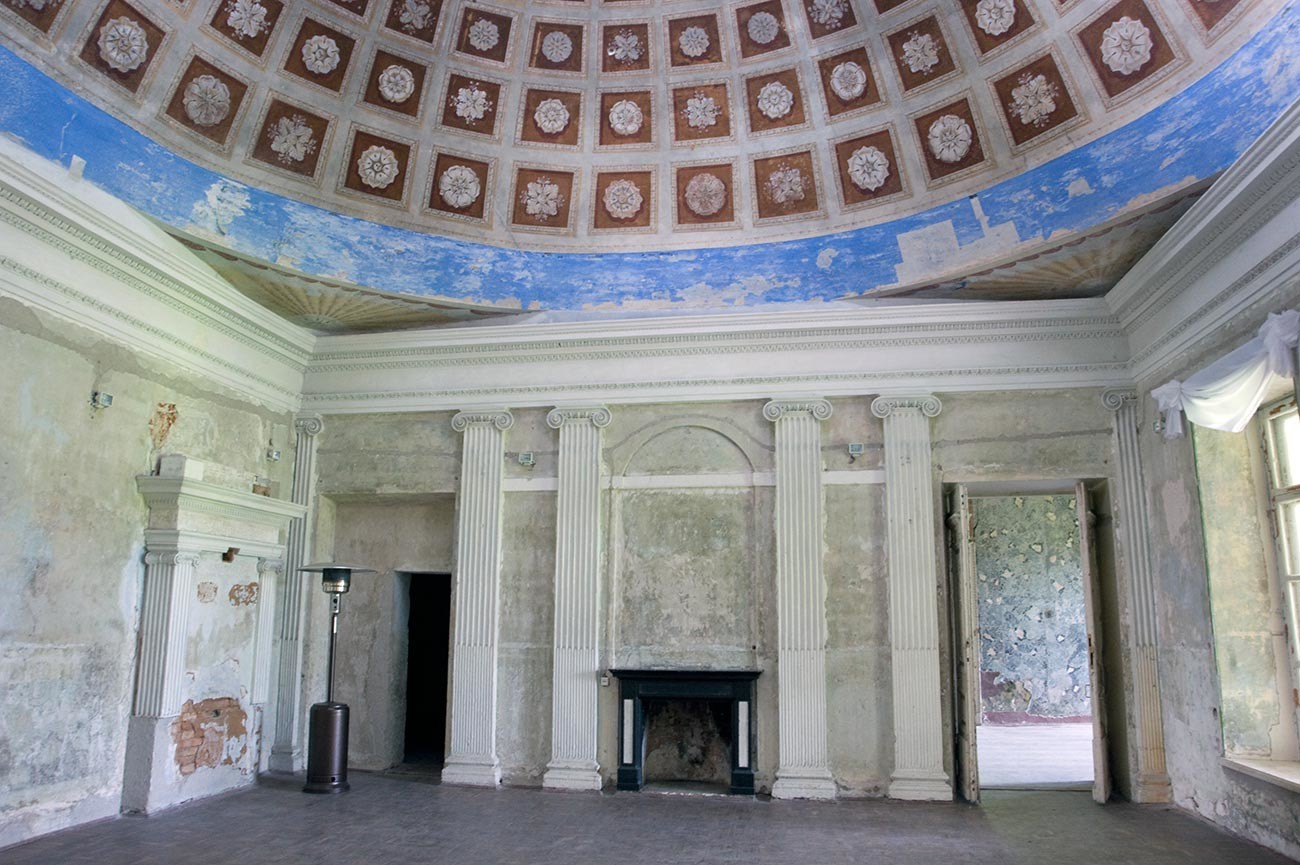 Over the course of the 19th century the neglected estate passed through the hands of various nobles, whose resources did not allow proper upkeep. During the Soviet period, the faded remains of the exquisite interior were wrecked and effaced.

In World War II, the mansion was used as a military hospital. Although some of the park pavilions were damaged or destroyed, the main house and its attached buildings remained structurally intact. 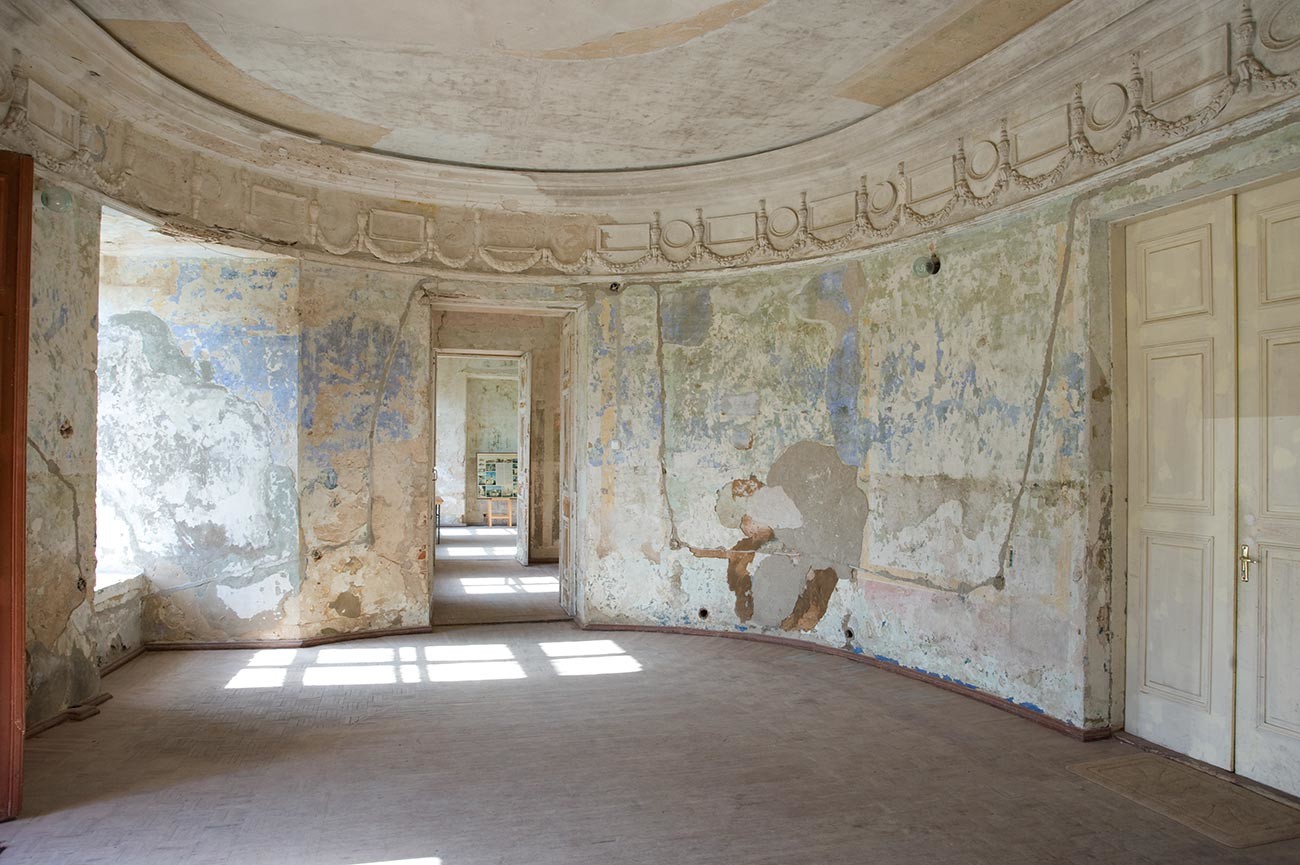 While so many other grand estate mansions collapsed into total ruin during the latter half of the 20th century, the survival of the Znamenskoe-Rayok estate is little short of miraculous. Yet attempts to restore the premises have been beset by lack of resources and administrative confusion. Like an enchanted realm, the estate of Zamenskoye-Rayok awaits its moment of awakening. 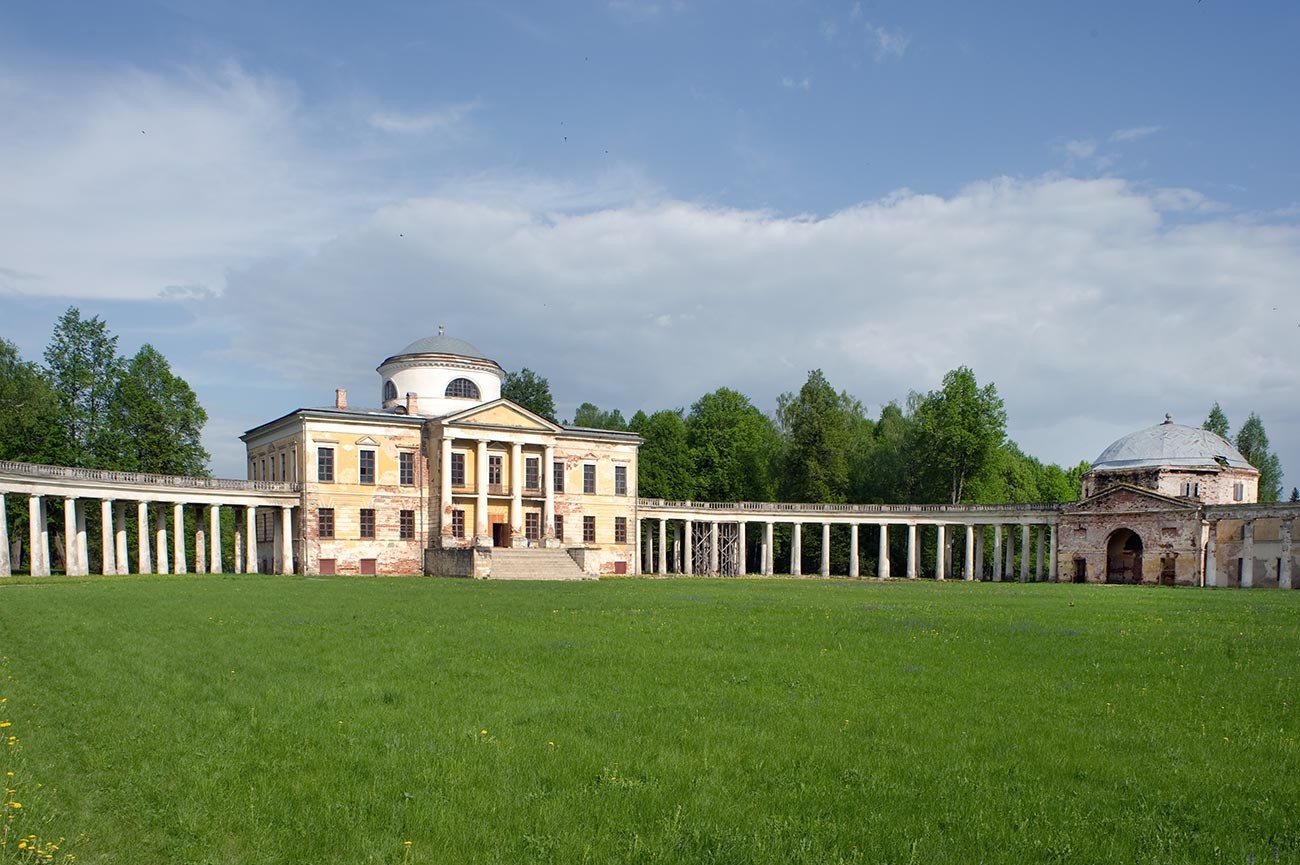