Treasures of Russia’s most picturesque monastery 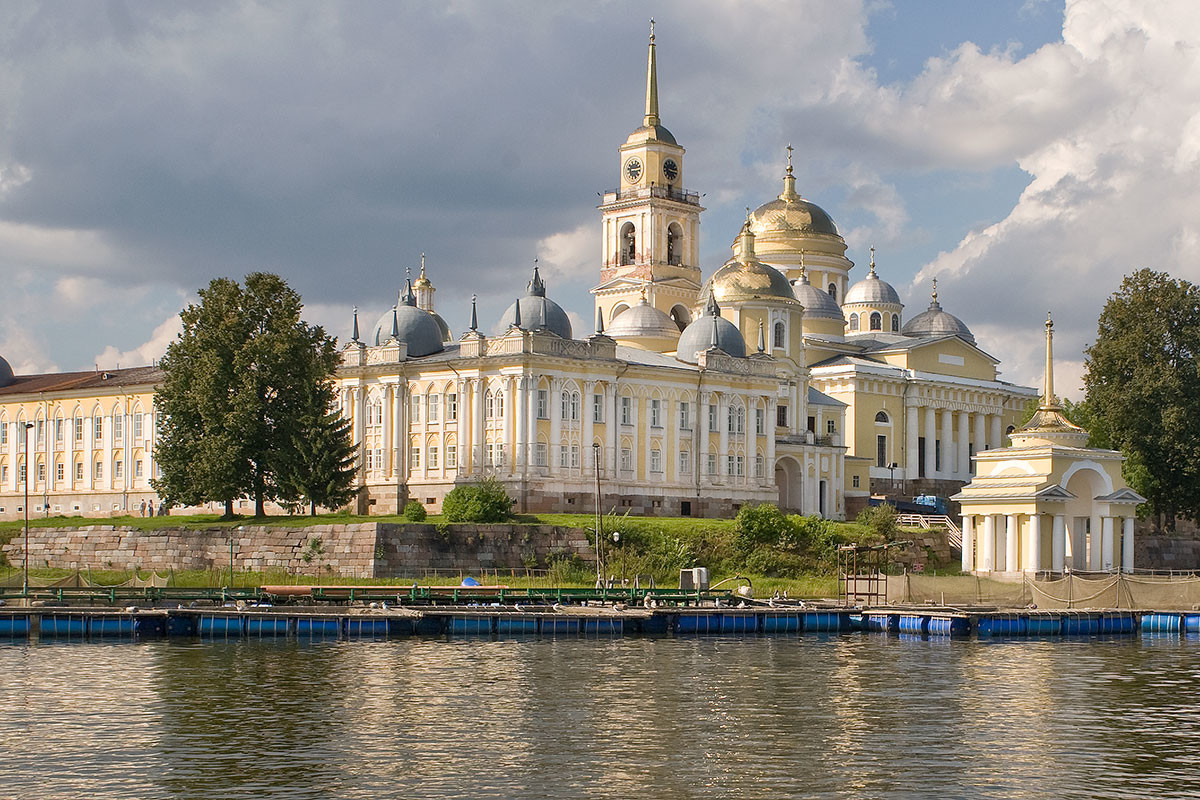 The St. Nilus Stolobensky Monastery sits on the small Stolobny Island in Lake Seliger, near the town of Ostashkov in Tver Region. The monastery possesses a special lyrical appeal in the midsummer, when the shores are fringed with reeds and water lilies. Russian photographer and chemist Sergey Prokudin-Gorsky (see box text below) took some of his most breathtaking photographs here in Summer 1910. My own photographic work dates from August 2016. 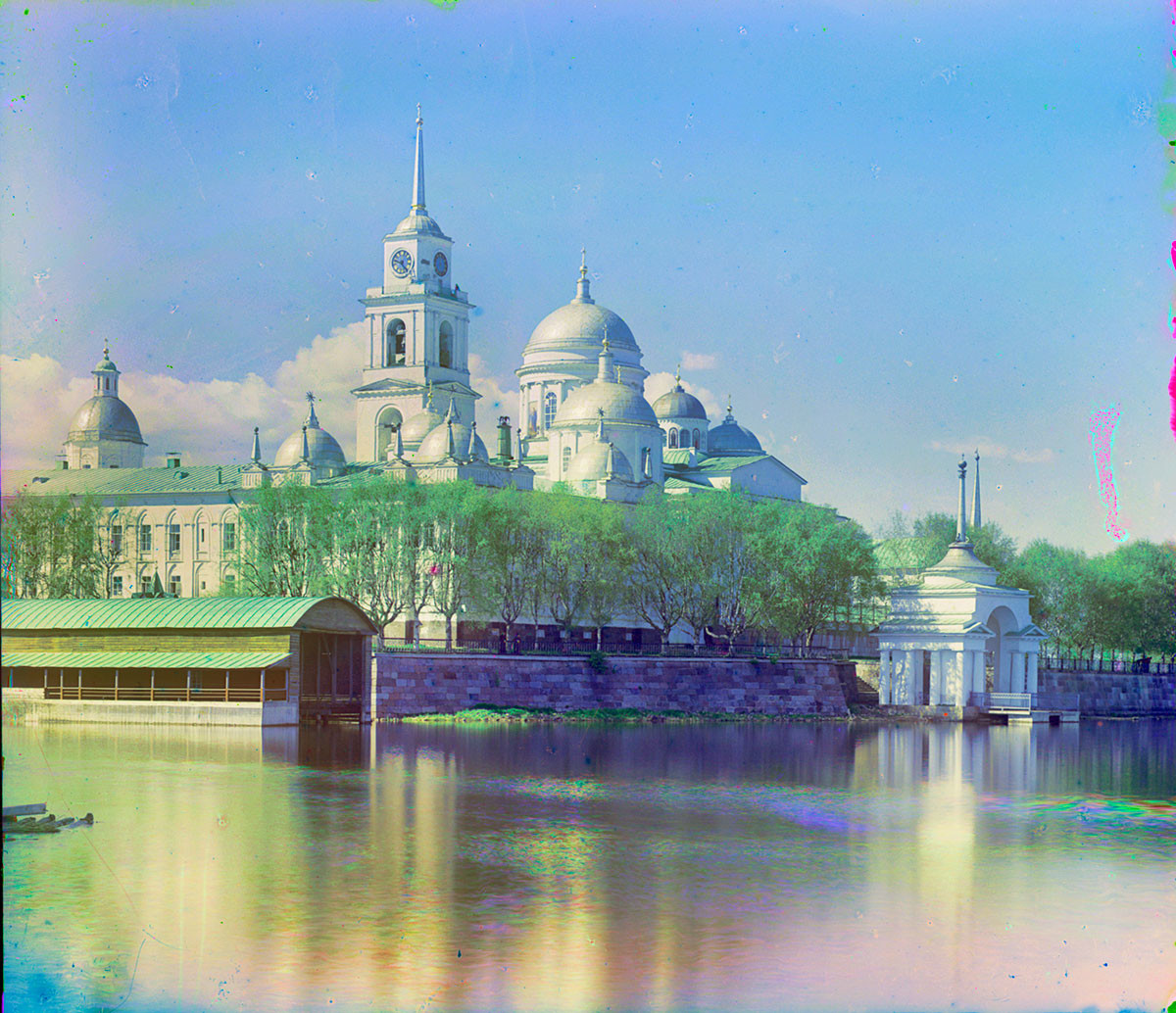 The last wish of a saint

The monastery’s guiding spirit, the monk Nilus (Nil in Russian), was born in the Novgorod region in the late 15th century. Orphaned at an early age, he entered the Kripetsky Monastery near Pskov and took the name of St. Nilus of Sinai, a 5th-century Byzantine monastic and theologian. In 1515, with his abbot’s blessing he went into the deep forest for a more rigorous form of monastic isolation. 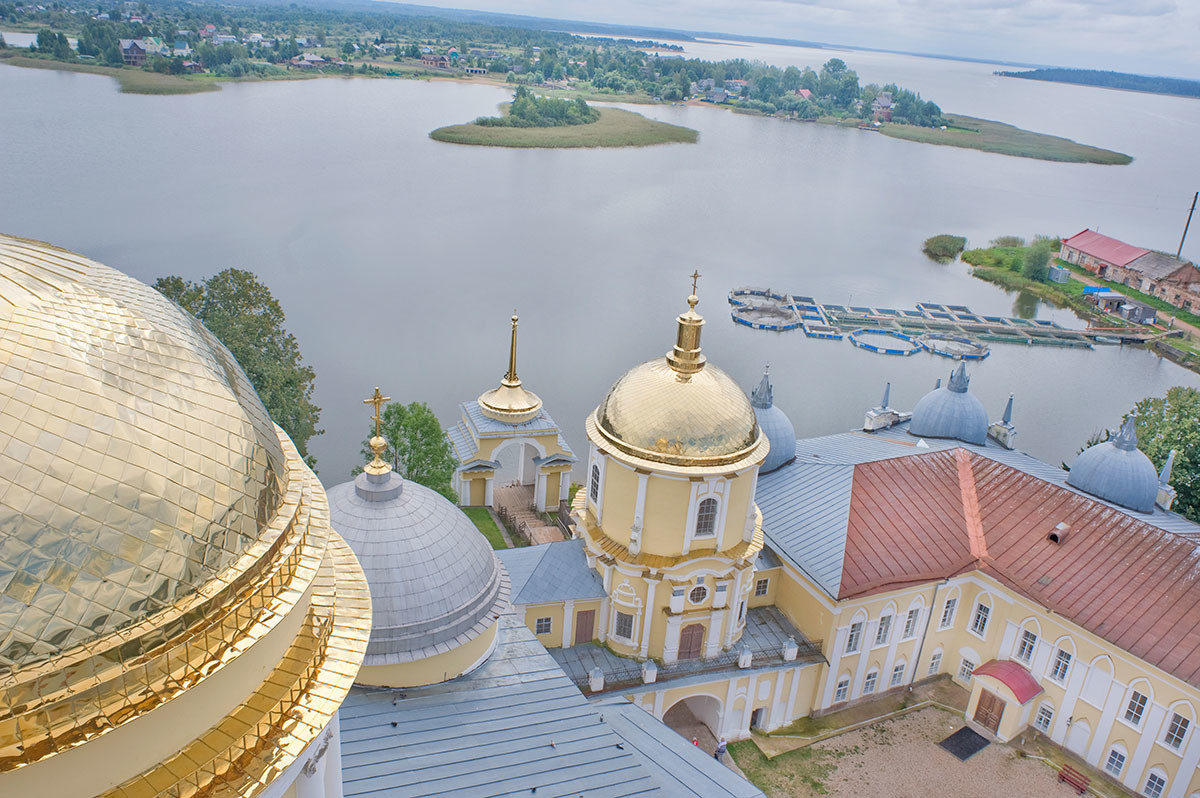 Word of Nilus’s saintly reputation spread, and he was visited by those who sought his blessing and prayers. After 13 years in the forest, Nilus followed God’s voice (according to the saint’s life story) and in 1528, made his way to an uninhabited island nestled in one of the many inlets of Lake Seliger.

Nilus was known for his extreme forms of self-abnegation. Sensing his demise, Nilus dug his own grave and expressed a desire for a monastic community to arise on the island. After taking last rites, he passed away in December 1555. In 1560 a log chapel was erected over the site of his forest cell. 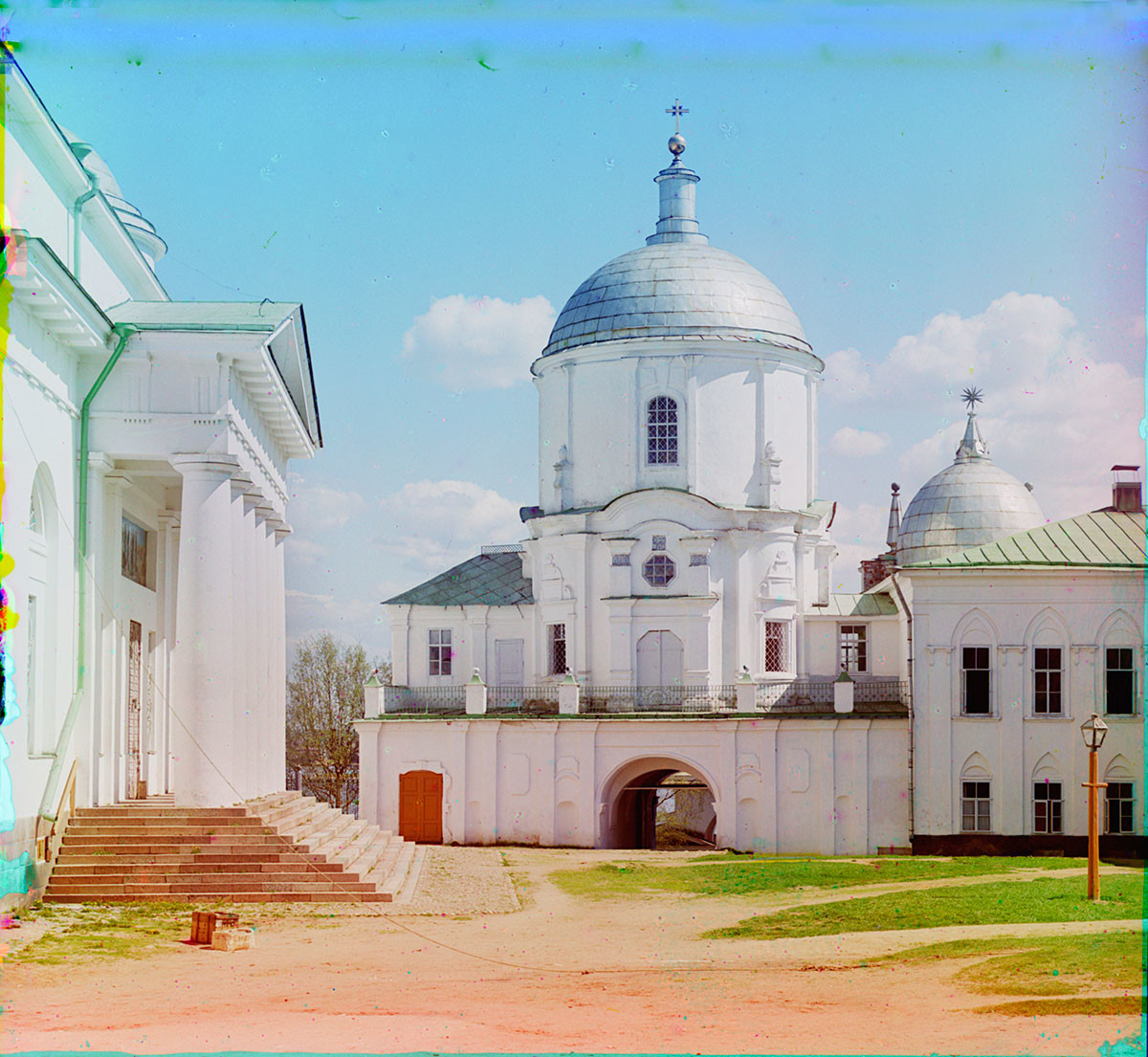 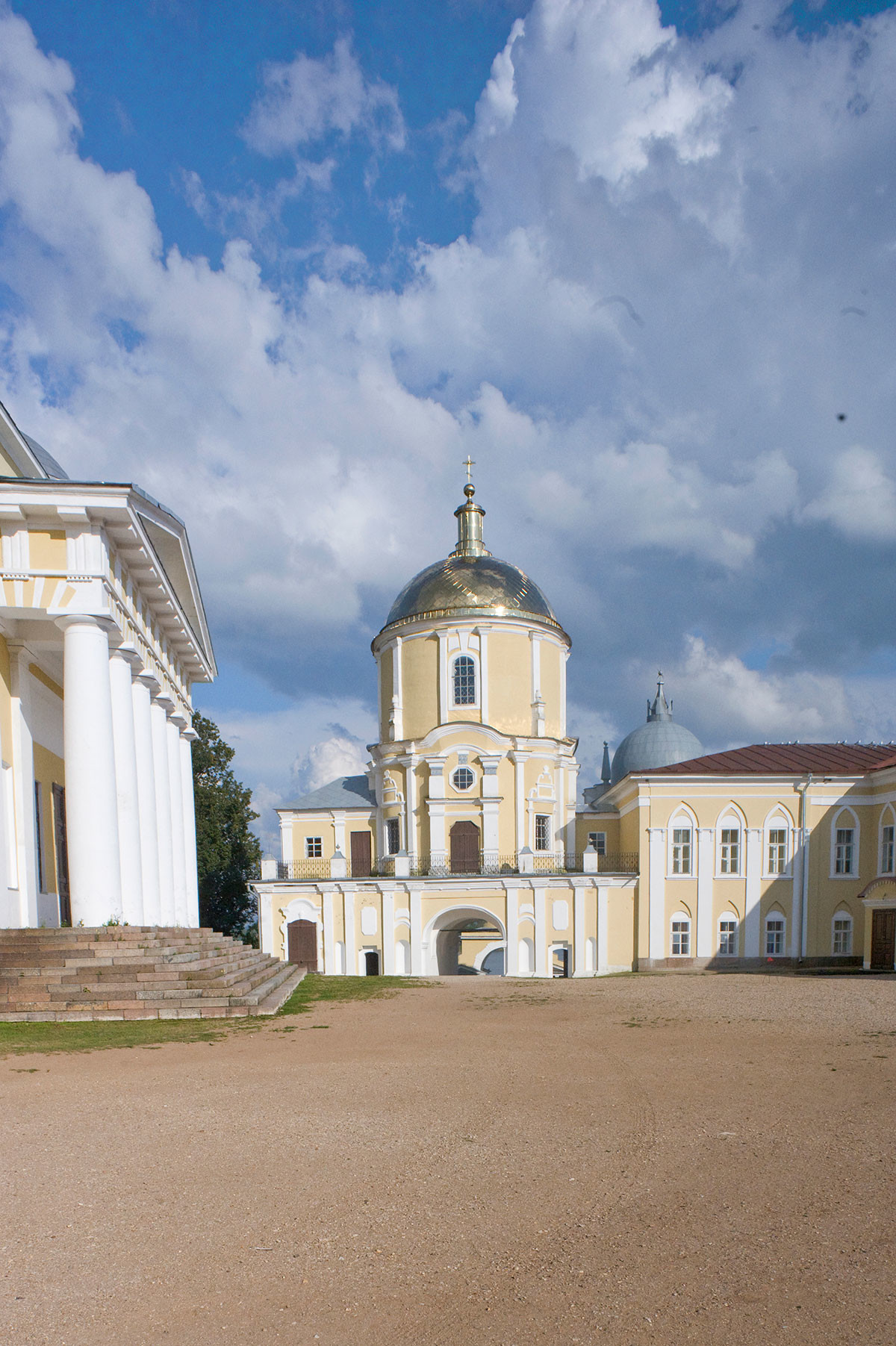 The actual founder of the Nil Stolobensky Monastery was the monk Herman from the nearby St. Nicholas-Rozhkovsky Monastery. Inspired by Nilus’s example and laboring to restore a chapel over his grave, Herman and others erected a log church dedicated to the Epiphany on the island in 1591-94. Shortly thereafter, a monastic community took root with the patriarch’s blessing.

The efforts of Herman and his brethren were soon threatened by the Time of Troubles, a dynastic crisis that led to a decade of widespread social and political chaos following the death of Tsar Boris Godunov in 1605. In 1610, the small monastery was devastated by marauding forces, and although Herman struggled to maintain the community, little remained after his death in 1614. 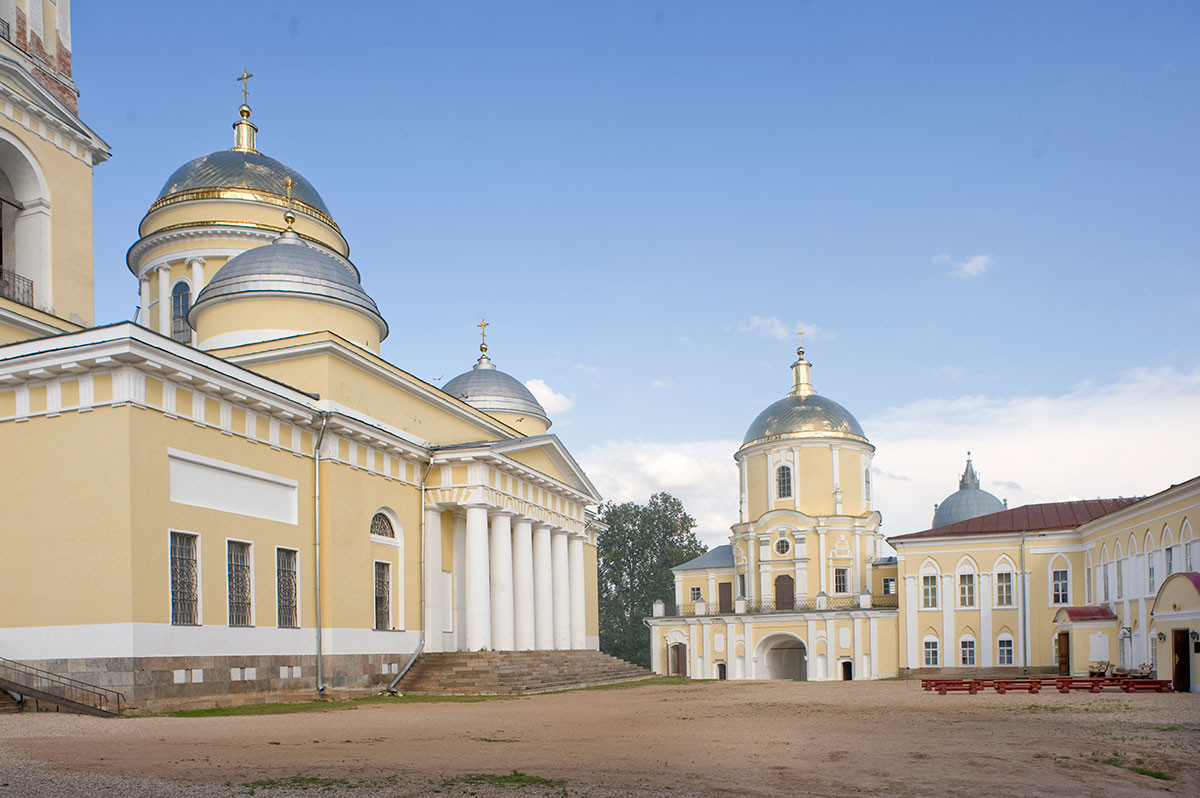 Fortunately, Herman’s follower Nektarius (1586-1667) possessed many practical talents and in 1622 was able to erect the monastery’s second church, dedicated to the Intercession of the Virgin. His abilities were eventually noted by the Muscovite court, and in 1636 Tsar Mikhail Romanov oversaw his elevation to Bishop of Siberia and Tobolsk.

In 1640, exhausted by severe Siberian conditions, Nektarius was permitted to return to his beloved monastery. In 1647, he resumed control of the community, which began to receive major gifts from Tsar Alexei Mikhailovich. 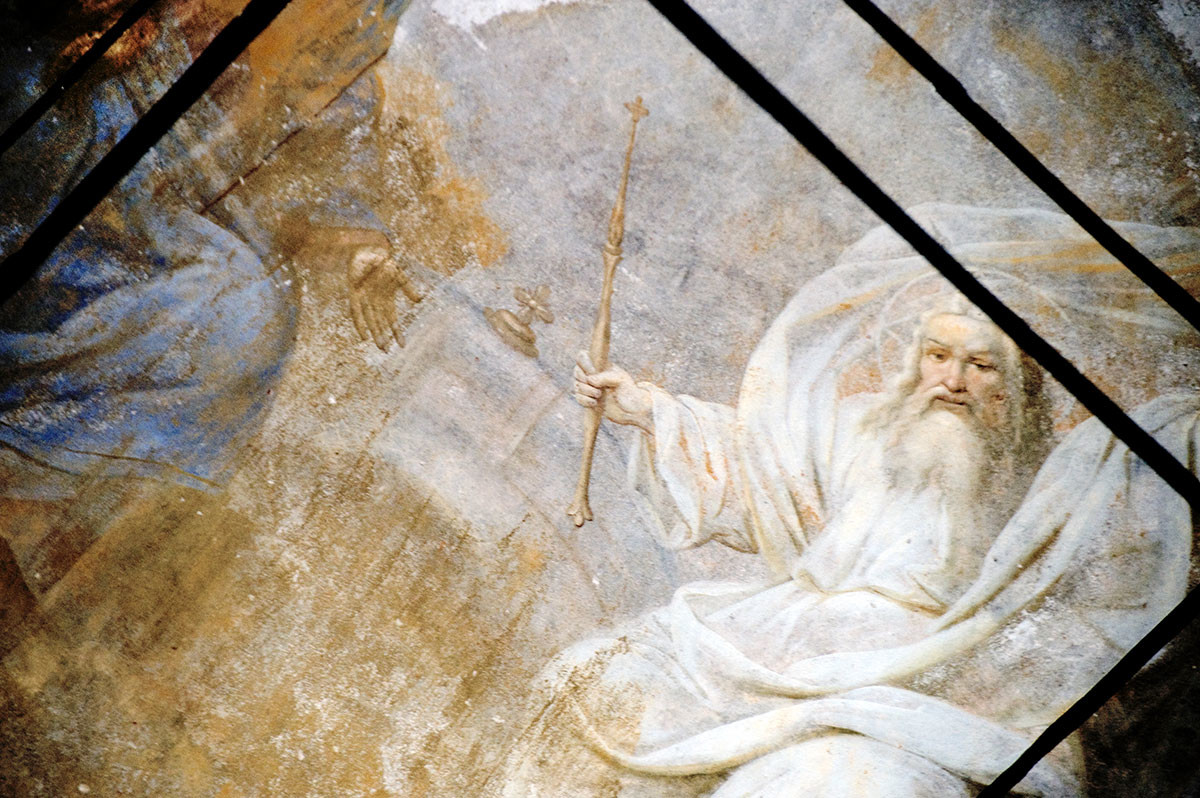 After a fire devastated the monastery in 1665, Nektarius launched a rebuilding that continued with royal support after his death. Although fragments of 17th-century walls survive in some of the monastic structures, most of the monastery’s churches were rebuilt beginning in the middle of the 18th century.

Among the earliest is the Church of St. Nilus Stolobensky, a Baroque structure built in 1751-55 over the East Gate, the formal entrance to the monastery from the lake. Prokudin-Gorsky took a special photograph of the church from the main courtyard to the west. I was able to replicate this view in 2016. Seemingly, all remained as it was at the beginning of the 20th century.

The church interior, however, was severely vandalized during the Soviet period, when the monastery was used as a prison. The interior is now being gradually restored. Fragments of 19th-century wall paintings have survived in the dome, as my photographs show. 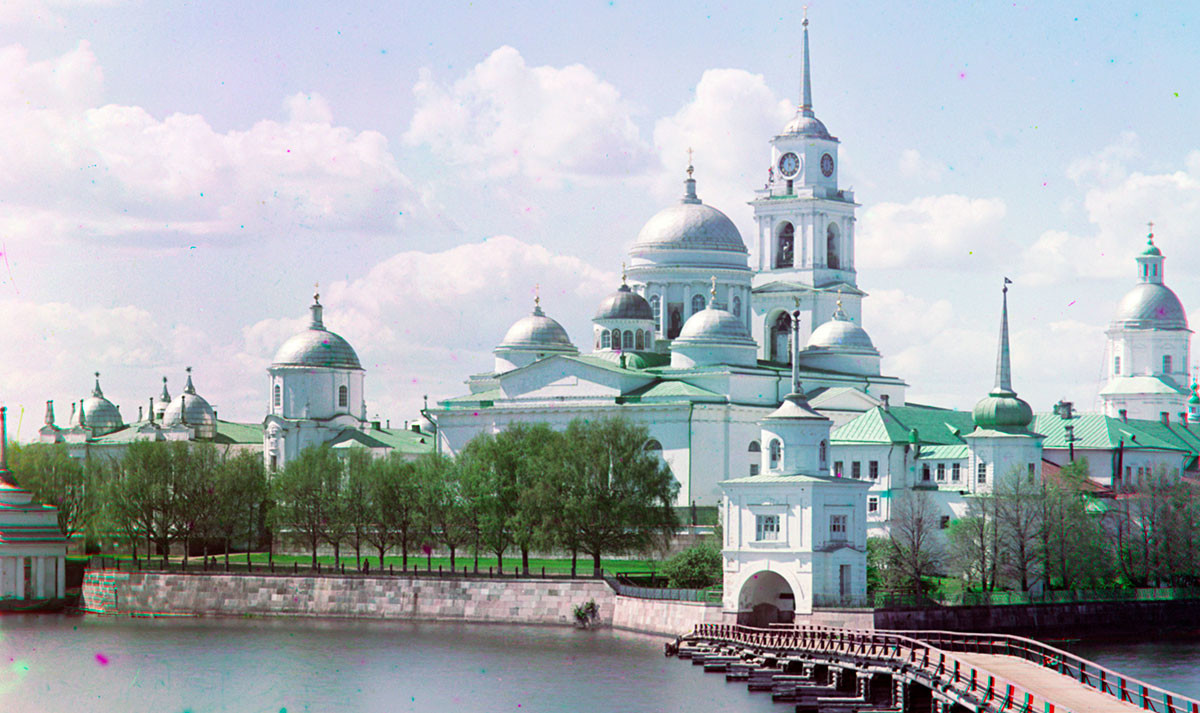 The main monastery square is dominated by the great Epiphany Cathedral and its bell tower. Since the end of the 16th century, there had always been an Epiphany Church on the island, but over the centuries, it was rebuilt as the monastery expanded.

Throughout its history, the monastery benefited from royal favor, and in 1820 it received a visit from Tsar Alexander I. With his favor, construction began the following year on the present cathedral, crowned with five domes. Its grand neoclassical design is attributed to Joseph-Jean Charlemagne (1782-1861), a major St. Petersburg architecture whose work compares with that of Carlo Rossi, the leading figure in late Russian neoclassicism. 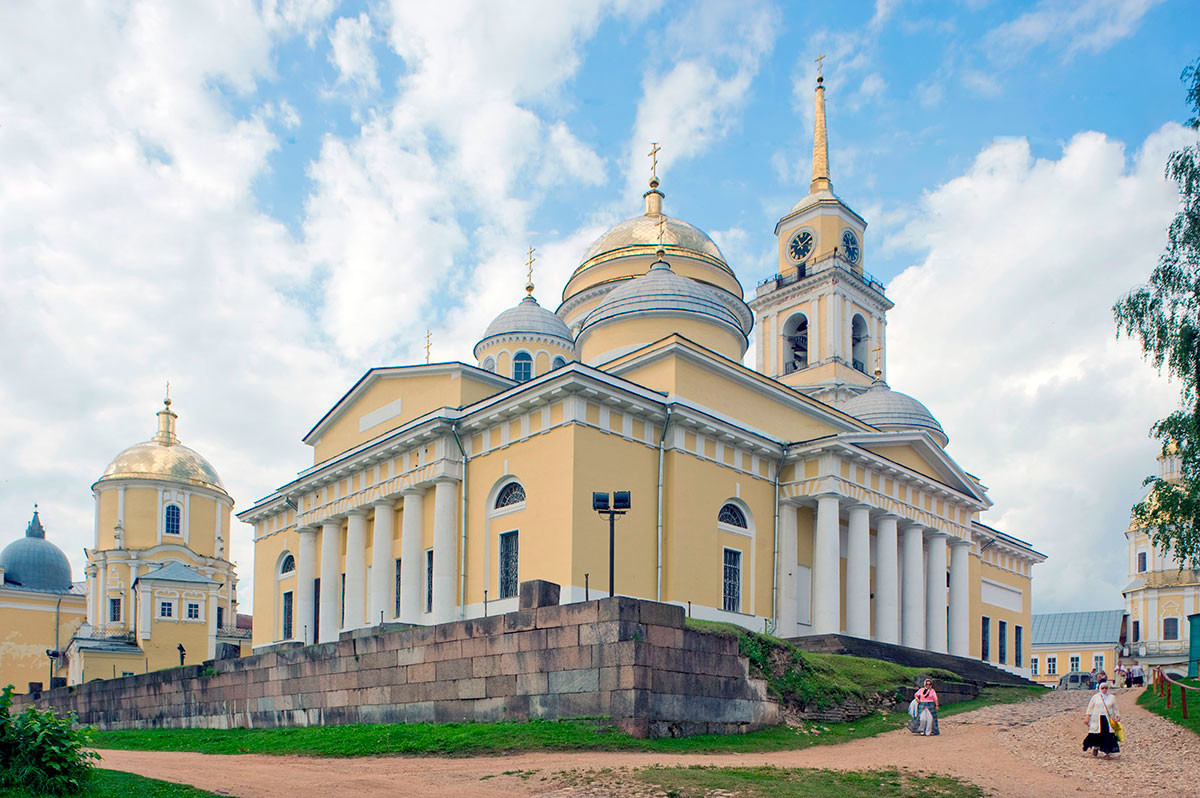 Consecrated in 1833, the new cathedral required additional interior work supervised by Ivan Lvov, chief architect of Tver Province. Architectural details were done in artificial marble, and wall paintings covered the interior. Most of the artwork was destroyed during the Soviet period, but paintings of archangels miraculously survived in the dome. My telephoto lens captured details of this impressive academic-style painting.

The east part of the cathedral now has a new icon screen before the main altar. The sanctuary also contains altars dedicated to the Annunciation and to St. Nicholas. (Multiple altars are characteristic of Russian Orthodox Churches.) The cathedral also contains a sarcophagus with the relics of St. Nilus.

During the first half of the 19th century, additional components of the central monastic ensemble extended from these two shrines. They include the exquisite Doric style Archbishop’s Landing — built in 1814 to the east of the St. Nilus Church – as well as the imposing south cloisters and Bishop’s Chambers, designed in a mixture of the neoclassical and the Gothic Revival styles. The sense of imperial St. Petersburg was amplified by the massive granite foundations and embankments among the south and east sides. 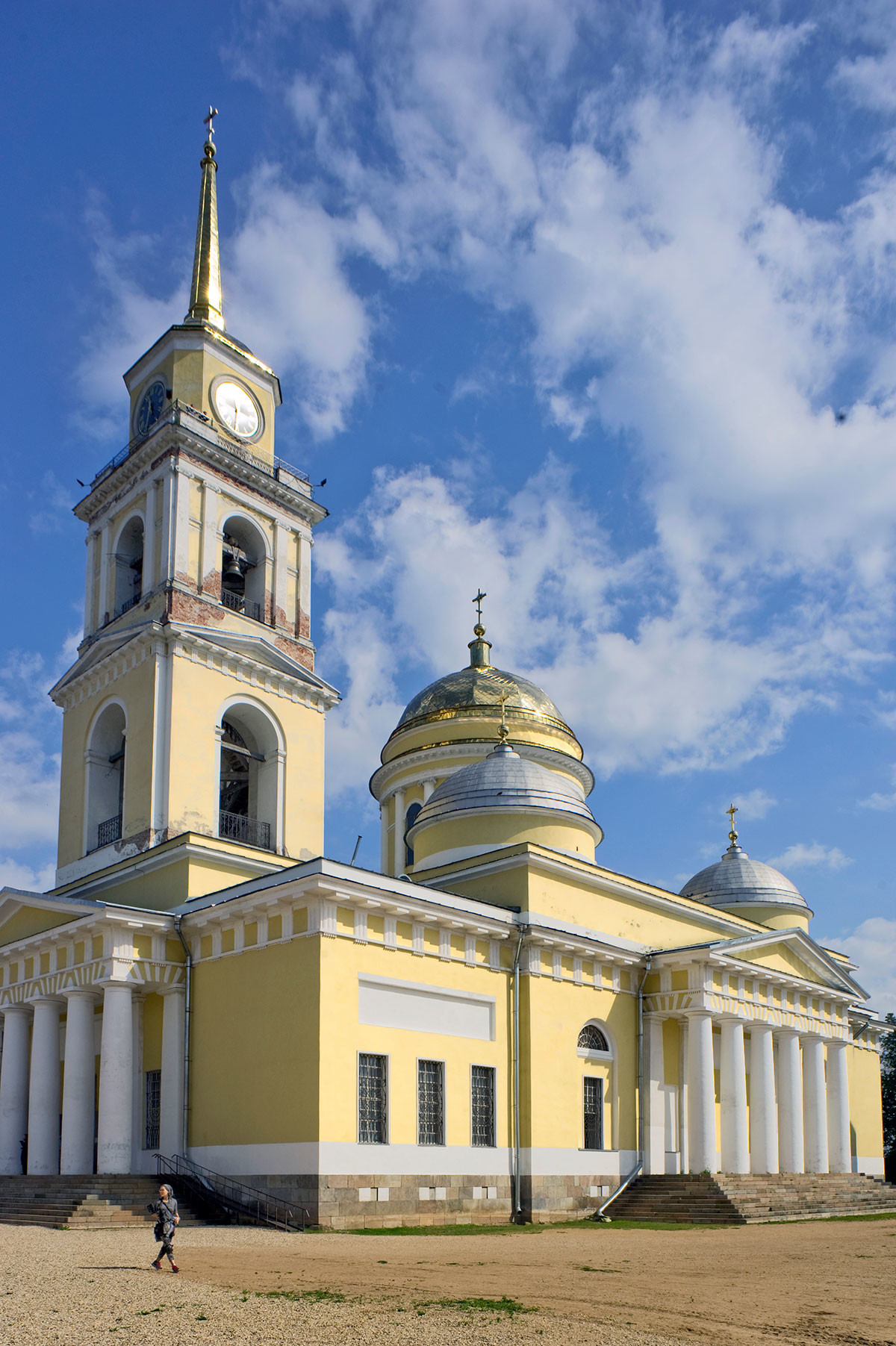 All these monumental structures are visible in Prokudin-Gorsky’s general views of the monastery. In August 2016, I took similar views from the water in a small boat provided by the monastery. The long exposures required by Prokudin-Gorsky’s color process could only be taken on a stable land base. Fortunately, he was able to find suitable viewpoints from nearby shores.

Both Prokudin-Gorsky and I benefited from the summer clouds that hovered over Lake Seliger. They are almost motionless in the still air. This stillness was particularly beneficial for Prokudin-Gorsky, since it eliminated the mottled, blurred appearance of wind-blown clouds in some of his long exposures. 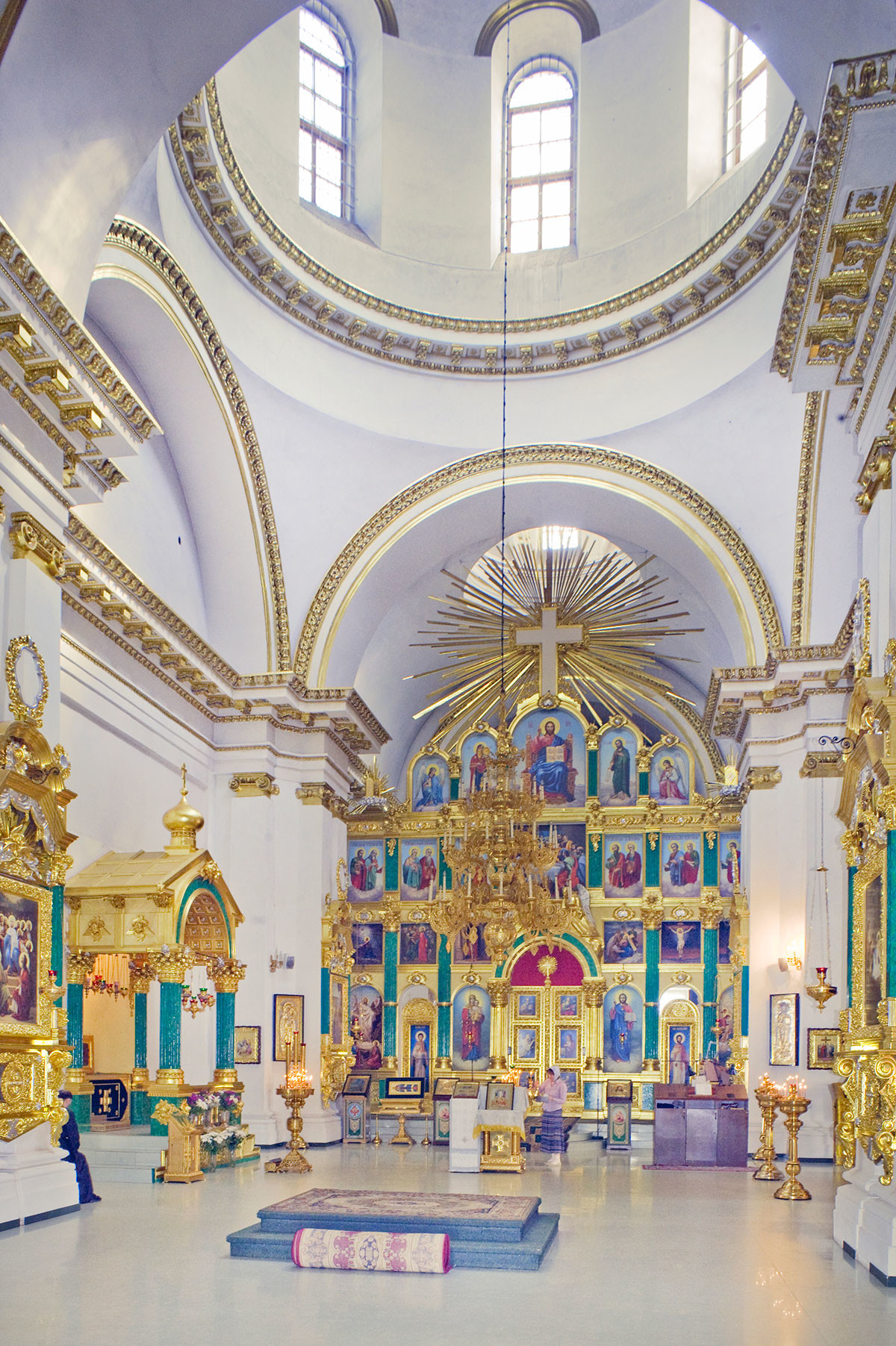 During the Soviet period the monastery endured many difficult trials. After its final closure in 1928, the buildings were ransacked and converted for use as a place of incarceration, primarily for juvenile offenders. Its darkest moment occurred in late 1939, when it was filled with 4,700 Polish prisoners of war (primarily officers) and became known as the “Ostashkov Camp”. In the spring of 1940, these prisoners were transferred to Tver (then called Kalinin) and shot in April and May as part of a mass execution of Polish prisoners by the NKVD. Their common grave at the village of Mednoe is now a memorial site. 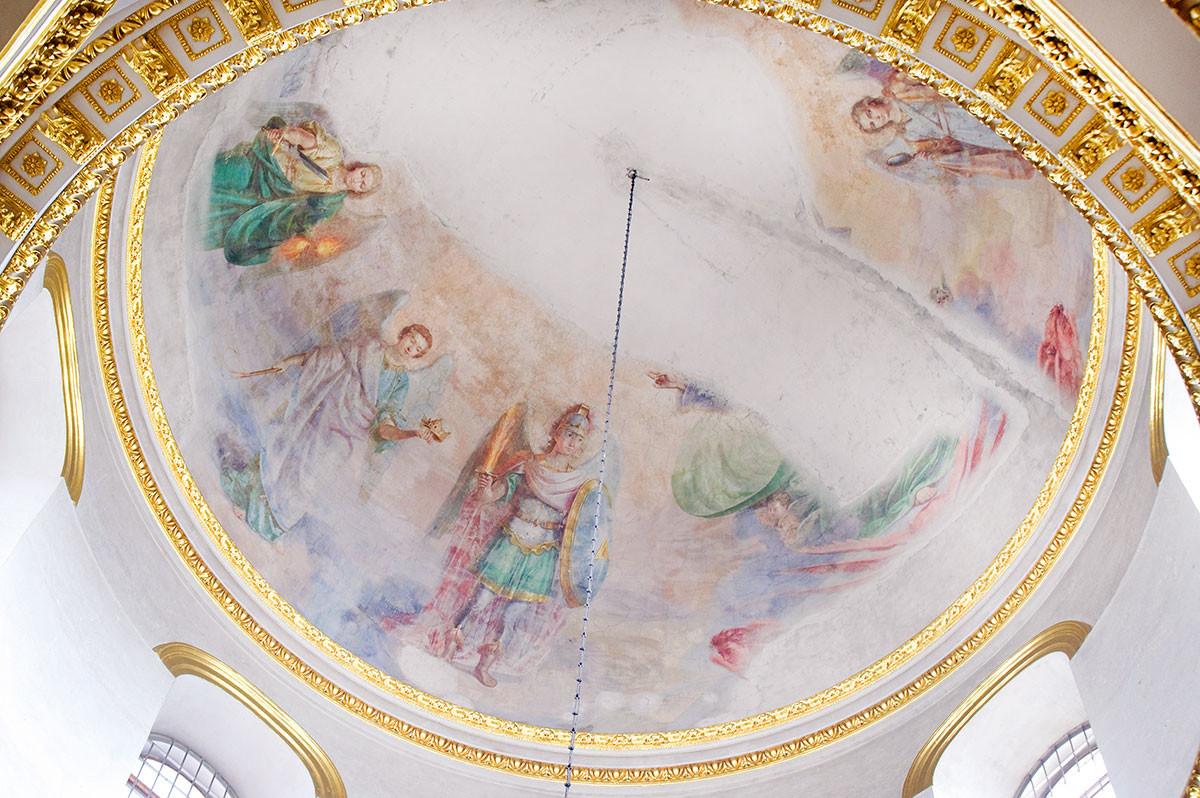 Following the German attack on the Soviet Union, which began on June 22, 1941), the monastery and the town of Ostashkov were close to the front line from late 1941 until January 1943. Tver (Kalinin) was itself occupied and partially destroyed by German forces for two months in the fall of 1941 before its liberation by a Red Army counteroffensive in mid-December.

From 1945 to 1960, the monastery again housed juvenile delinquents, then for a decade was used as a home for the elderly. Despite the natural beauty of the location, attempts between 1971 and 1990 to create a tourist base within the former monastery failed for lack of resources. 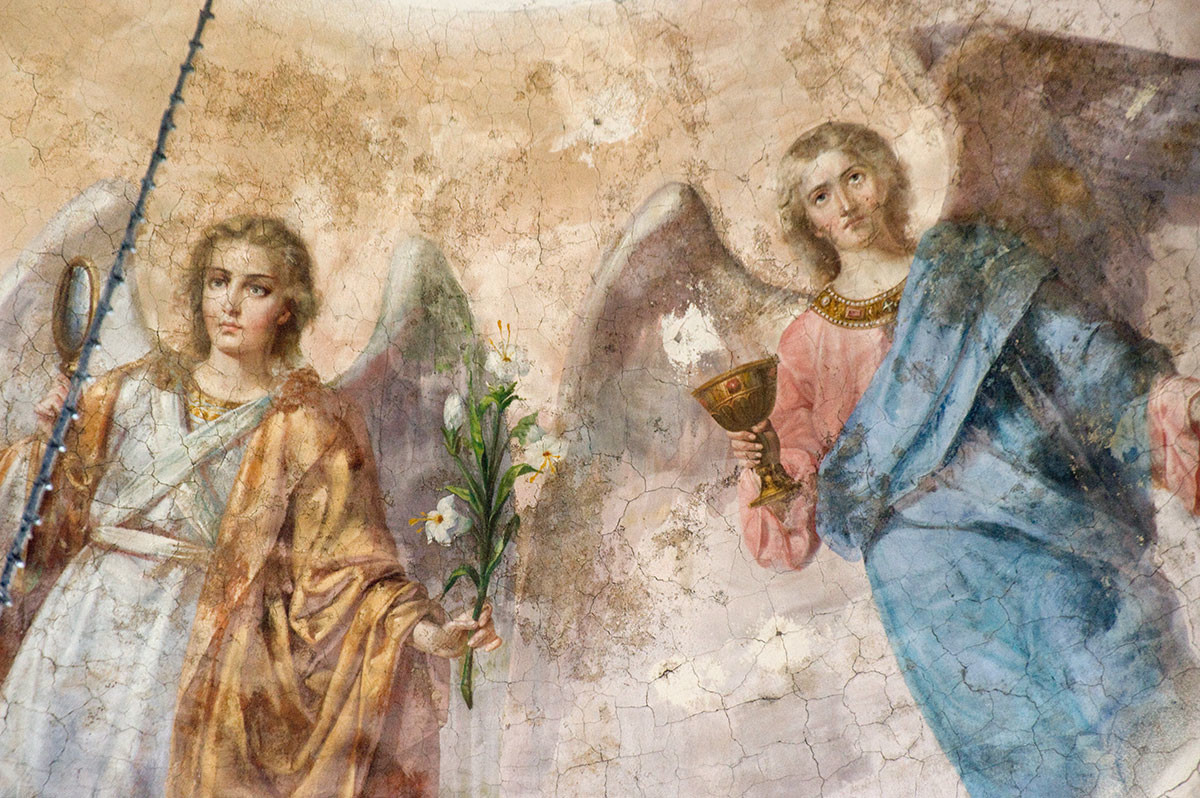 The restoration of this architectural ensemble has required enormous efforts, and each year brings noticeable progress. Throughout this process Prokudin-Gorsky’s photographs have been valued as a reflection of the monastery at its apogee before the chaos of revolution and war. 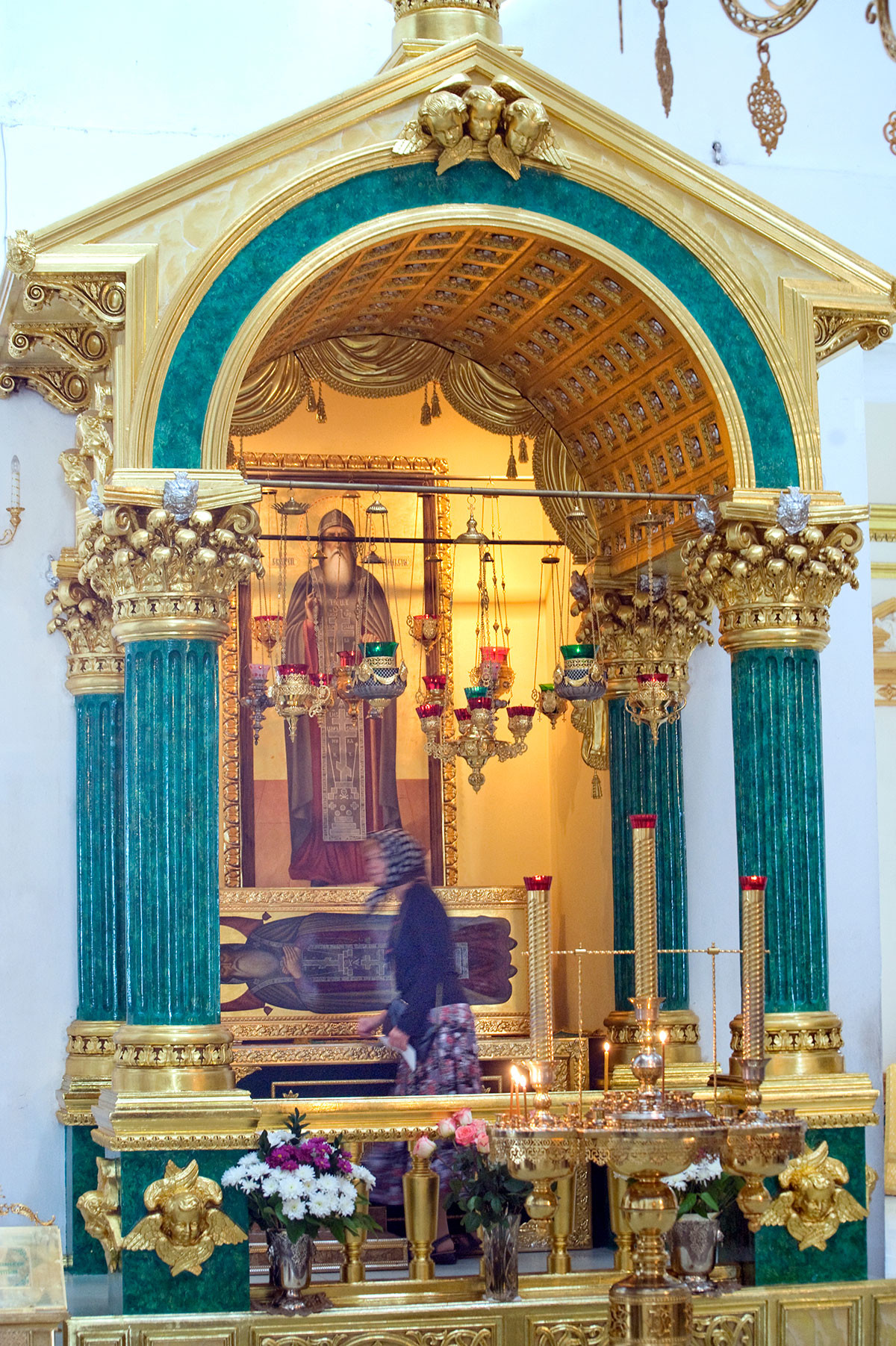 In the early 20th century the Russian photographer Sergey Prokudin-Gorsky developed a complex process for color photography. Between 1903 and 1916 he traveled through the Russian Empire and took over 2,000 photographs with the process, which involved three exposures on a glass plate. In August 1918, he left Russia and ultimately resettled in France where he was reunited with a large part of his collection of glass negatives, as well as 13 albums of contact prints. After his death in Paris in 1944, his heirs sold the collection to the Library of Congress. In the early 21st century the Library digitized the Prokudin-Gorsky Collection and made it freely available to the global public. A few Russian websites now have versions of the collection. In 1986 the architectural historian and photographer William Brumfield organized the first exhibit of Prokudin-Gorsky photographs at the Library of Congress. Over a period of work in Russia beginning in 1970, Brumfield has photographed most of the sites visited by Prokudin-Gorsky. This series of articles juxtaposes Prokudin-Gorsky’s views of architectural monuments with photographs taken by Brumfield decades later.