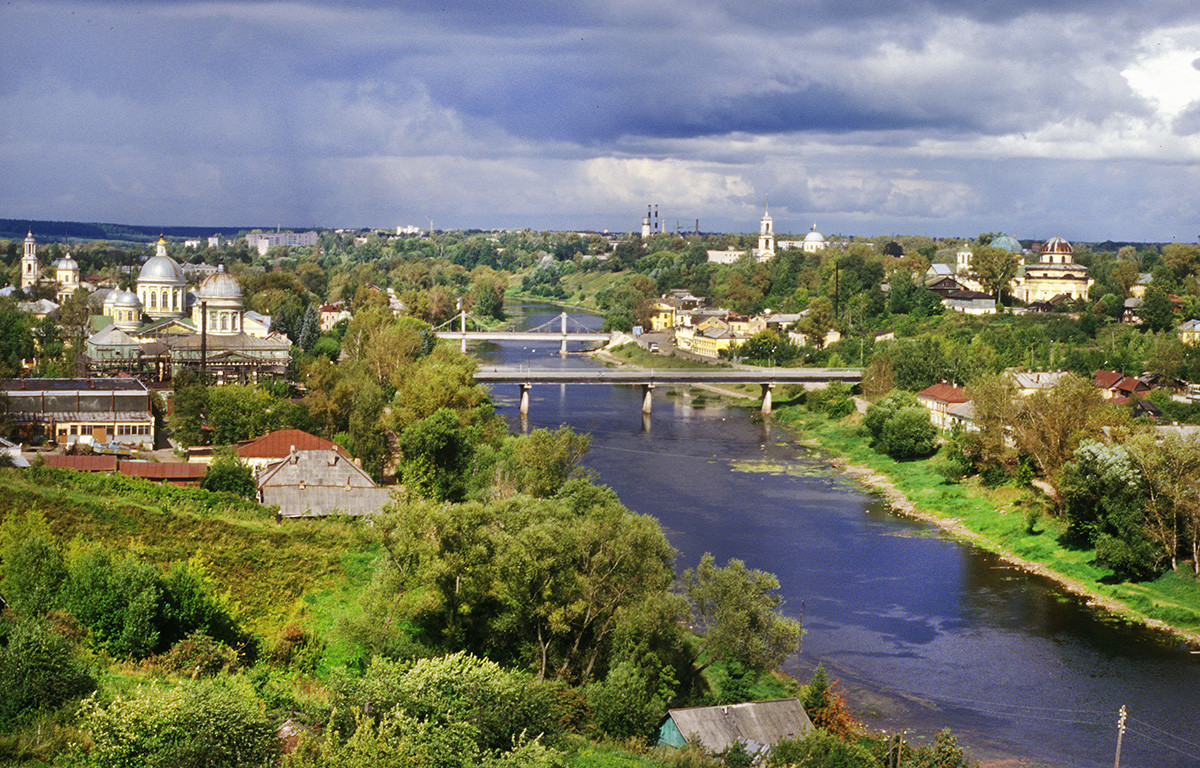 Situated some 40 miles to the west of the city of Tver and near the mid-point of the highway between Moscow and St. Petersburg, Torzhok is among the oldest settlements in central Russia. In the summer of 1910, Russian photographer and chemist Sergey Prokudin-Gorsky made numerous photographs in the town, known for its ensembles of neoclassical architecture, as part of his journeys in the upper Volga area. My several forays occurred between 1995 and 2010. 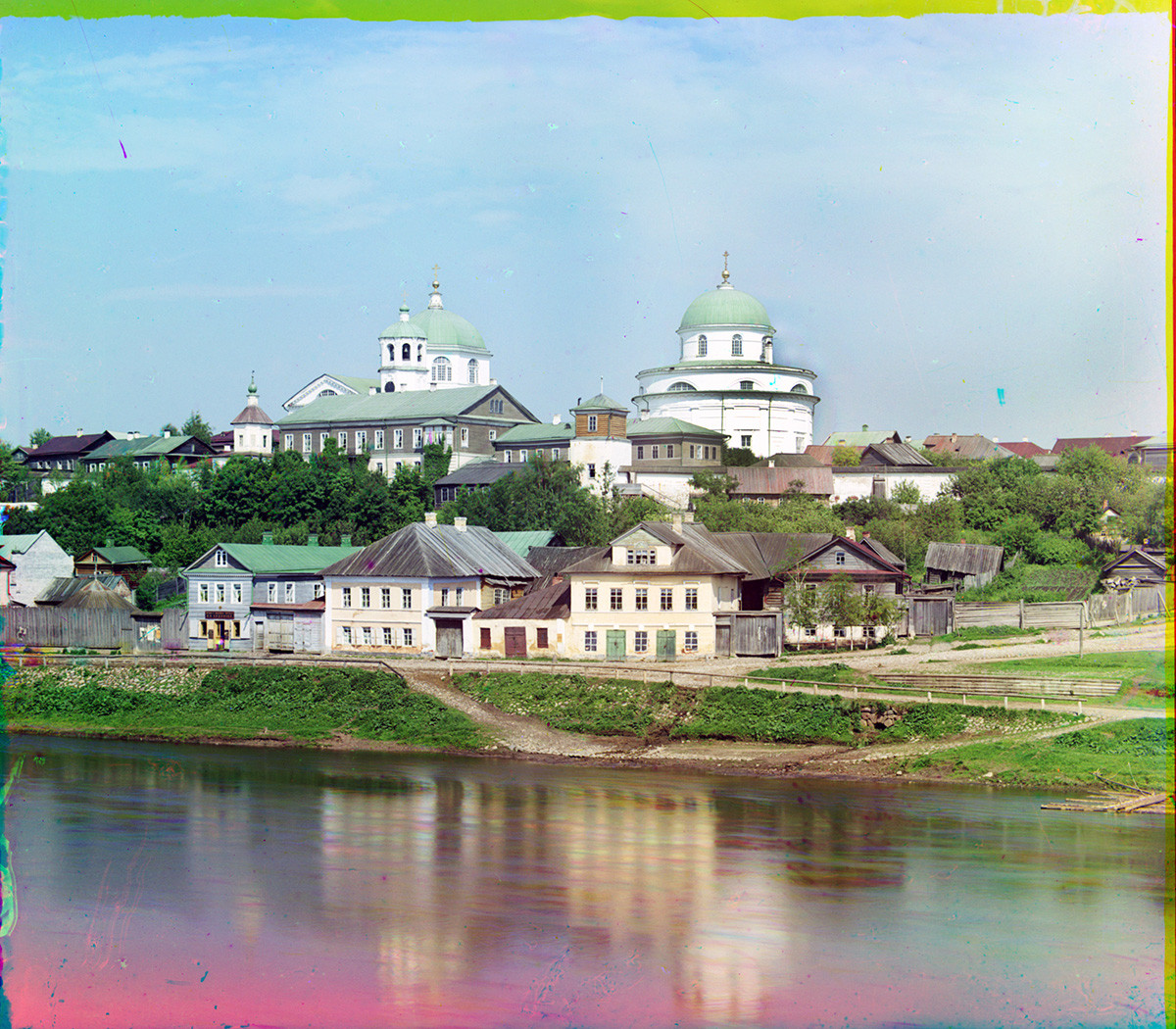 The earliest recorded mention of Torzhok appears in an ancient chronicle under the year 1139, earlier than the putative founding date of Moscow (1147). As in the case of Moscow, there were probably Slavic settlements on the site by the 10th century, and the town's oldest monastery, dedicated to Sts. Boris and Gleb, is considered to have been founded in 1038. Nevertheless, that first written reference to 1139 has become the official date of town's founding. 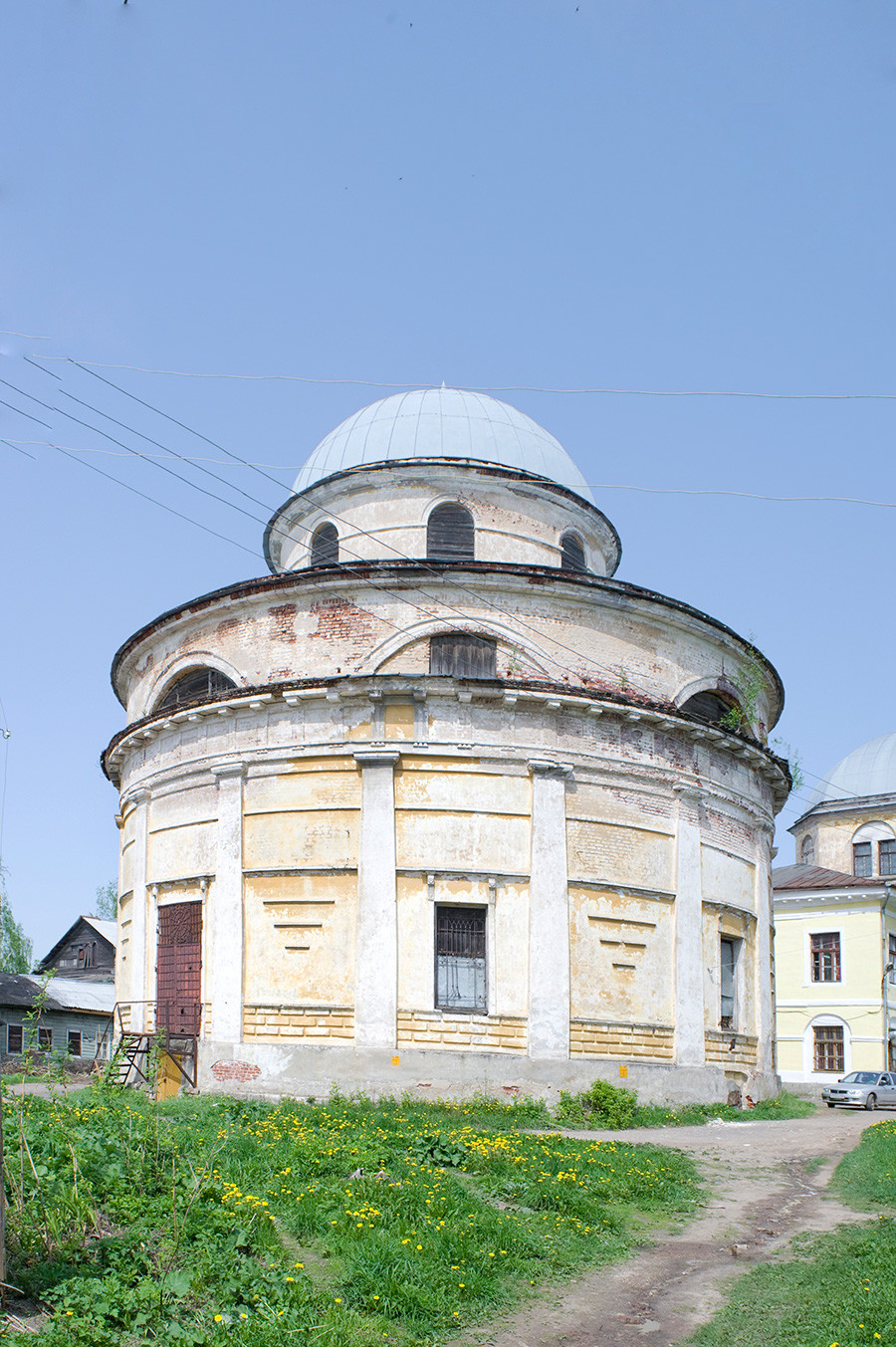 Resurrection Convent, Church of Decapitation of John the Baptist. Southeast view. May 14, 2010

From the outset, Torzhok's favorable location on the Tvertsa River just above its confluence with the Volga made it a place of vibrant commerce. Indeed, its name comes from the word torg (“trading site").

Torzhok was closely connected to the leading center of early medieval Russian trade, the city-state of Novgorod. Its merchants provided Novgorod with grain, and it is estimated that by the beginning of the 13th century, as many as 2,000 Novgorodians regularly visited Torzhok to conduct trade. The town also served as a defensive bulwark in Novgorod's southeastern territory.

Because of its economic and geographic importance, Torzhok was frequently the target of powers hostile to Novgorod, including principalities such as Tver. The most dramatic and ruinous event in the city's medieval history was its heroic resistance to a siege by the Mongols in 1238. Although hopelessly outnumbered, the town's defenders held their ramparts for two weeks. The inevitable outcome was the destruction of Torzhok and its inhabitants, but the unexpectedly stout resistance might have played a role in sparing Novgorod from a devastating attack. 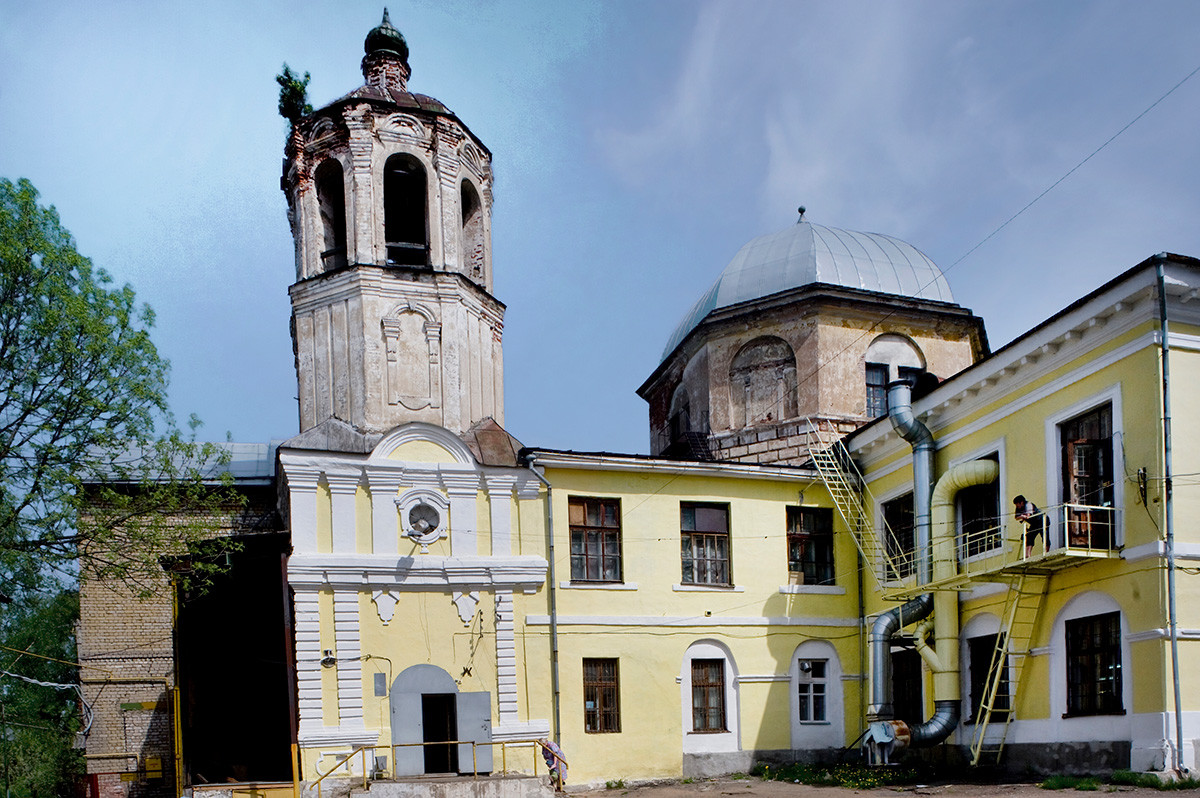 Resurrection Convent, Resurrection Cathedral. Southwest view. Adapted for use as sewing workshop. May 14, 2010

The rise of Muscovite power in the 15th century brought an end to Novgorod's independence in the 1480s, and in 1478 Torzhok entered the domains of Moscow's ruler Ivan III (the Great). Moscow recognized Torzhok's importance by rebuilding its kremlin (fortress) walls, with 11 towers (leveled in the 18th century. A few traces of the ramparts are still visible near the central area of town, between the Tvertsa River and its small tributary, the Zdorovets. Yet with the decline of Novgorod, Tozhok lost much of its commercial significance. 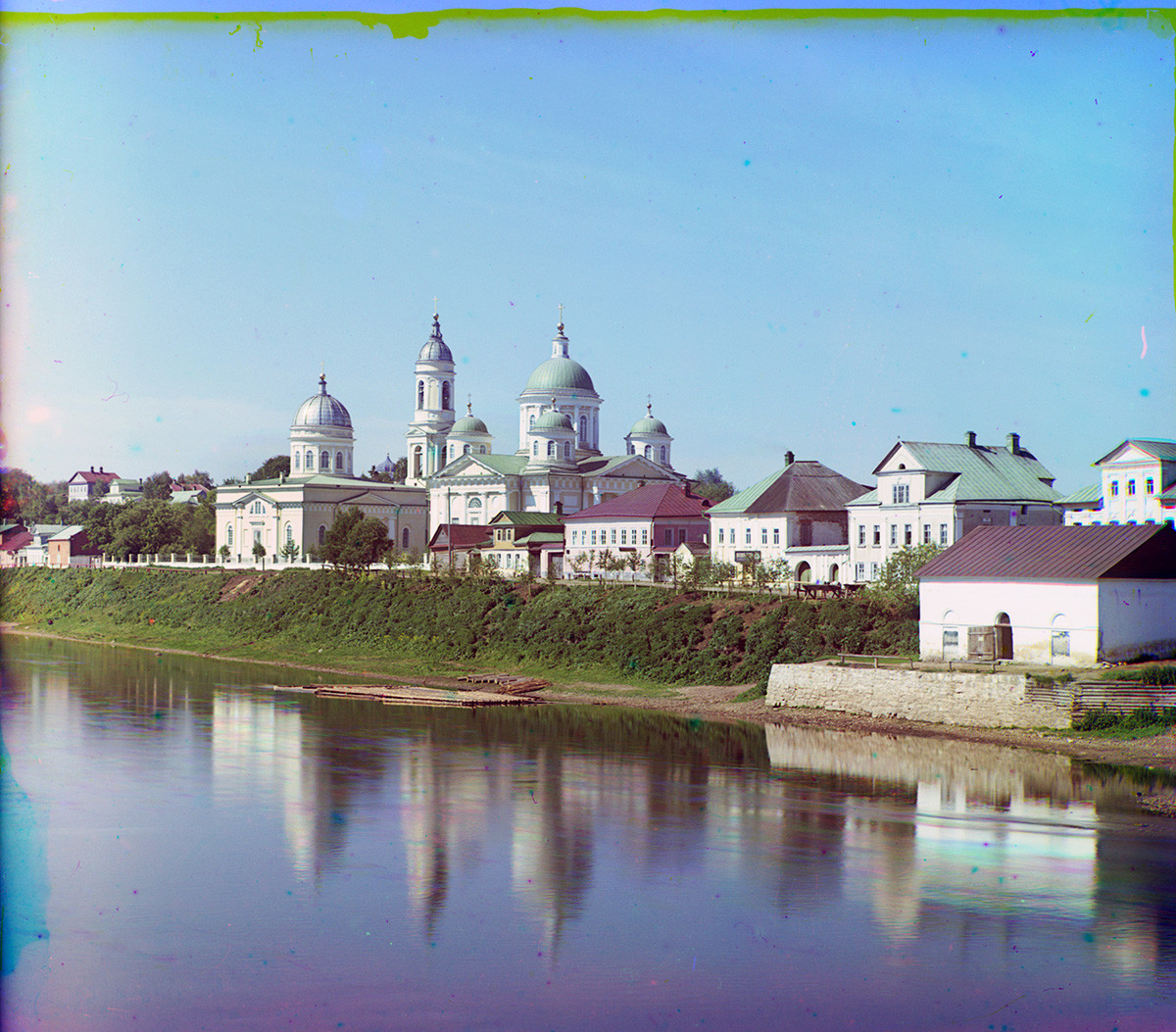 After the founding of St. Petersburg in 1703, however, Torzhok experienced a revival as a major shipment point for supplies moving to the new imperial capital. Commerce also stimulated local agriculture and the estates that depended upon it. The town's central place on the new post road between the old and new capitals also reinvigorated local crafts production.

The highway brought a steady stream of the rich and famous. In the 1770s, Catherine the Great commissioned the architect Matvei Kazakov to build a small "Transit Palace" there, as she did in other major towns along her route between the two capitals. 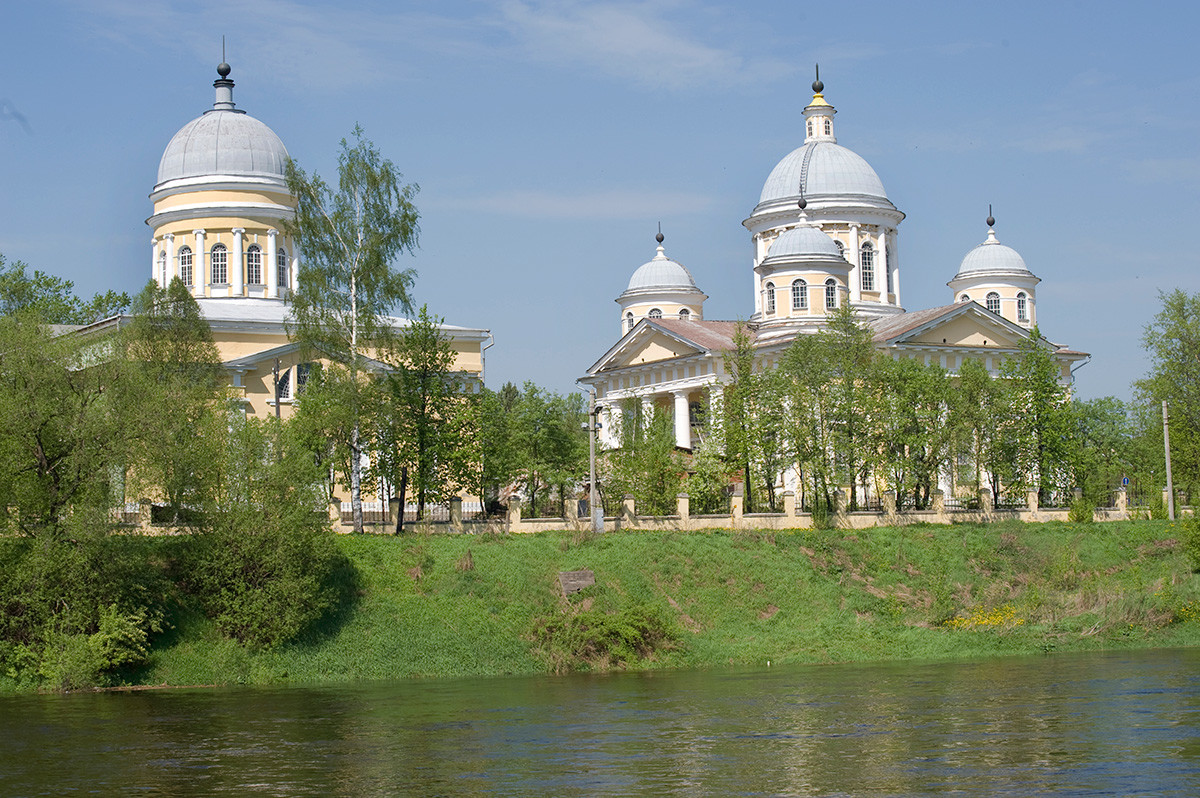 In the early 19th century Alexander Pushkin visited Torzhok on a number of occasions, and Anna Petrovna Kern, the inspiration for one of Pushkin's best-known love lyrics, is buried in the nearby village of Prutnya. Other prominent writers such as Alexander Radishchev, Nikolai Gogol, Ivan Turgenev, and Leo Tolstoy also visited Torzhok. More than just a way station, the town had become a modest cultural center in its own right.

Like other provincial towns, Torzhok began to rebuild itself at the end of the 18th century. During the reign of Catherine the Great, neoclassicism in Moscow and in the provinces flourished above all as an architecture of wealthy landowners and merchants. Neoclassical architecture represented power and privilege during the age of Catherine. 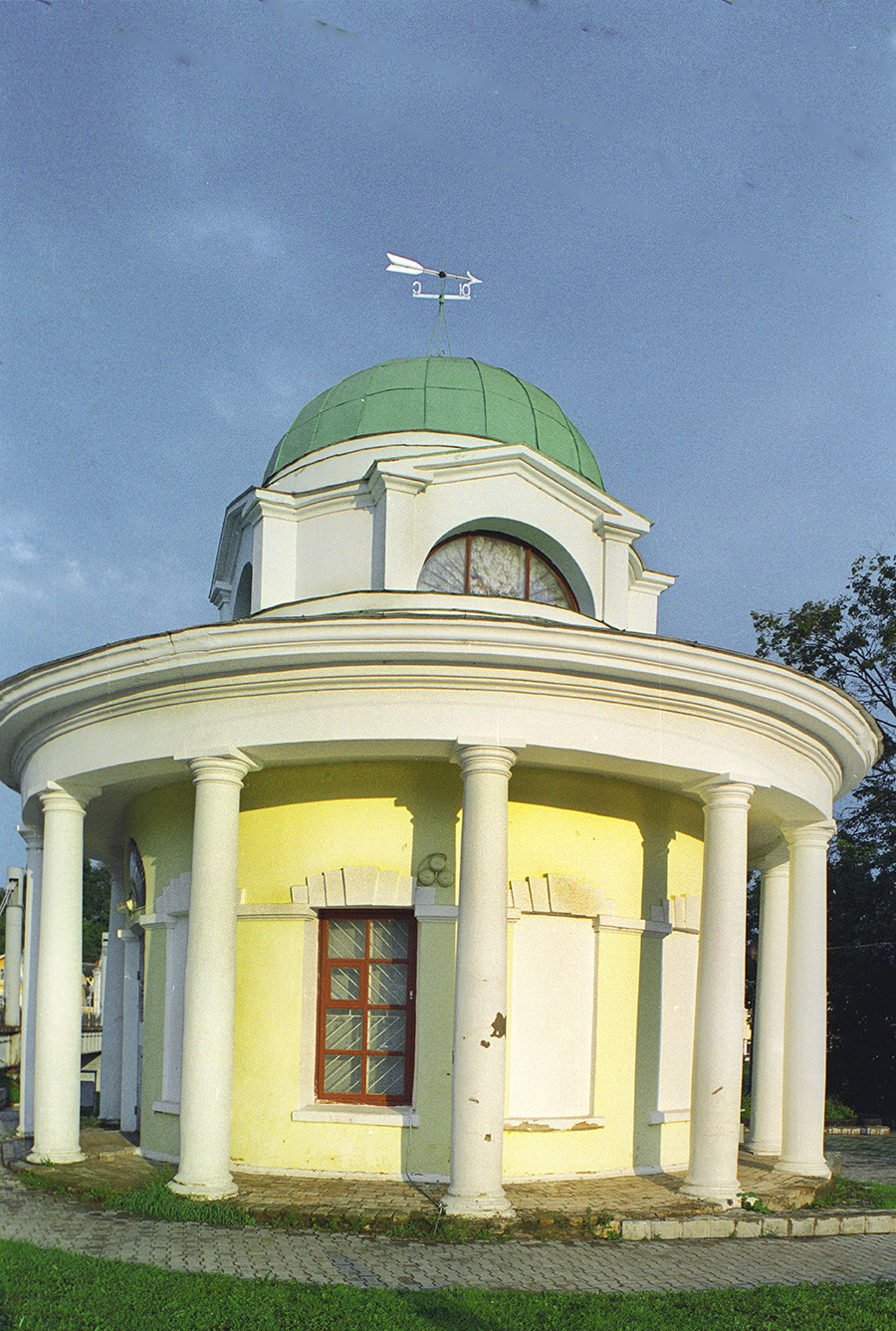 Chapel of Elevation of the Cross on Red Square. West view. Rebuilt after destruction by German bombing in fall 1941. August 18, 2006

Torzhok benefited noticeably from these ideas of classical harmony in such areas as the design of a new central square and arcaded market buildings, flanked by administrative buildings. The town's more prosperous residents rebuilt their houses in stuccoed brick according to new model plans, promulgated by the authorities in order to create an appearance of provincial order and prosperity. 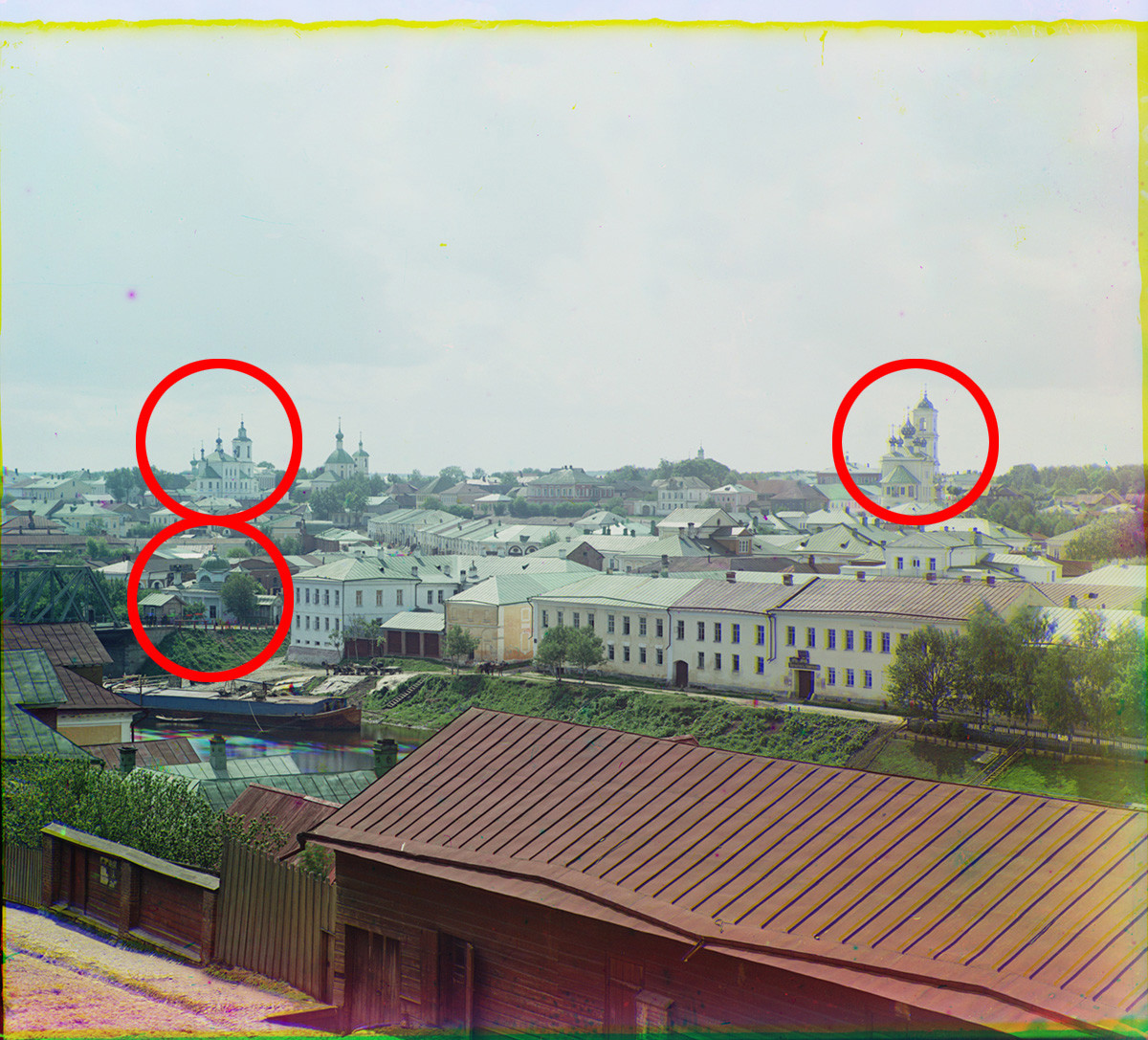 By the turn of the 19th century, this confluence of favorable economic circumstances brought Torzhok to the apogee of its prosperity. The gentry culture of the surrounding estates and the merchant culture of the town contributed to the relative well-being of Torzhok - bearing in mind that the majority of the region's population still consisted of enserfed peasants until their liberation in 1861.

Prokudin-Gorsky captured this neoclassical ambience, particularly in photographs taken from church bell towers in the center. A number of these houses still exist. Although badly in need of proper maintenance, they contribute much to the 19th-century ambience of Torzhok. 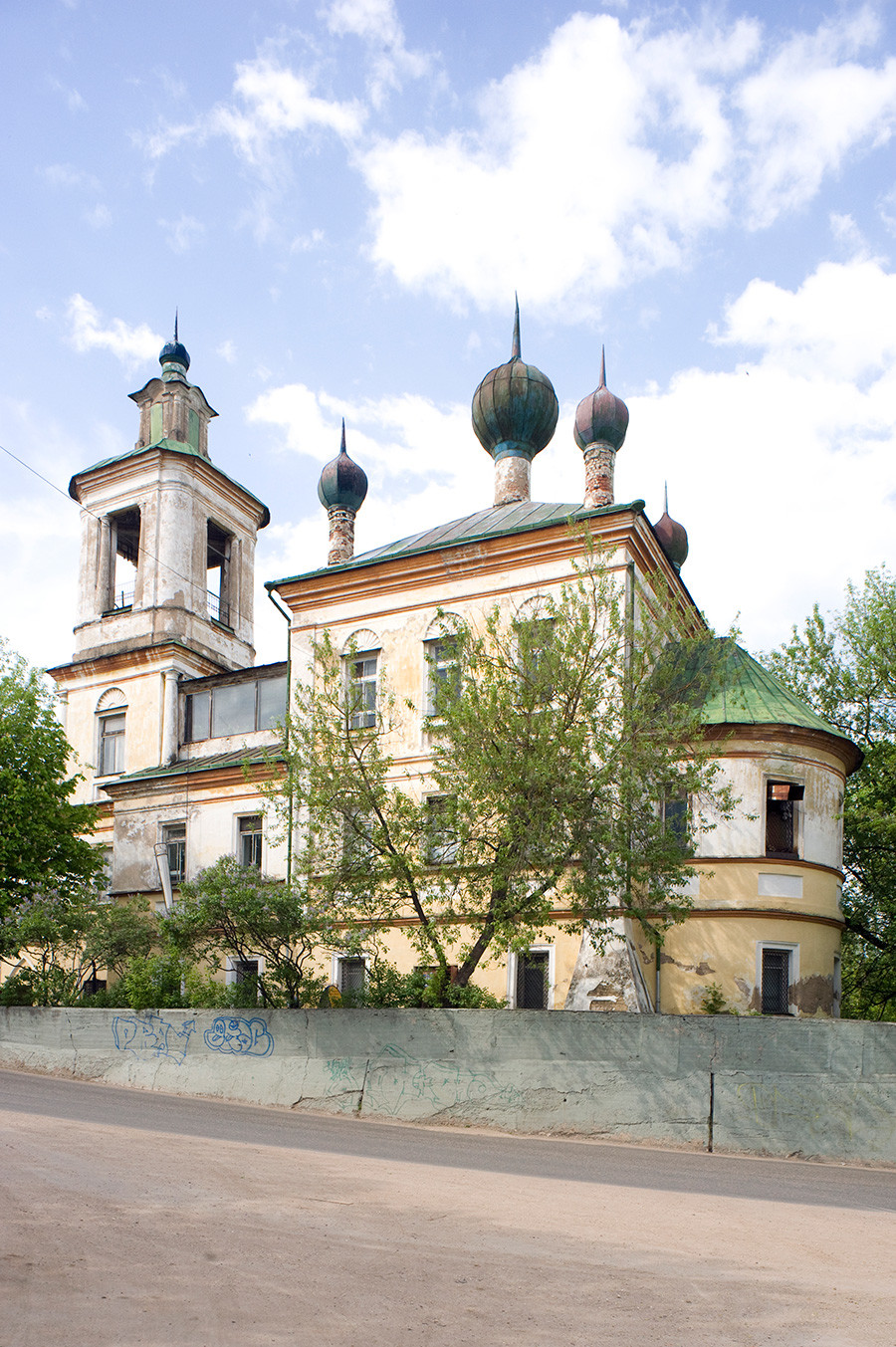 A primary example of the town's transformation in the early 19th century is its religious architecture. For example, the Convent of the Resurrection, founded at the end of the 16th century on one of the bluffs overlooking the Tvertsa River, was, like the Monastery of Sts. Boris and Gleb, rebuilt in a neoclassical style between the late 18th century and 1840.

Of particularly interest is the convent’s round Church of the Decapitation of John the Baptist, built in 1833-40 by the noted Tver architecture Ivan Lvov. Unfortunately, it and the other convent buildings have been poorly maintained. The convent was closed in the 1920s and converted to a sewing workshop, still functioning at the time of my latest visit. 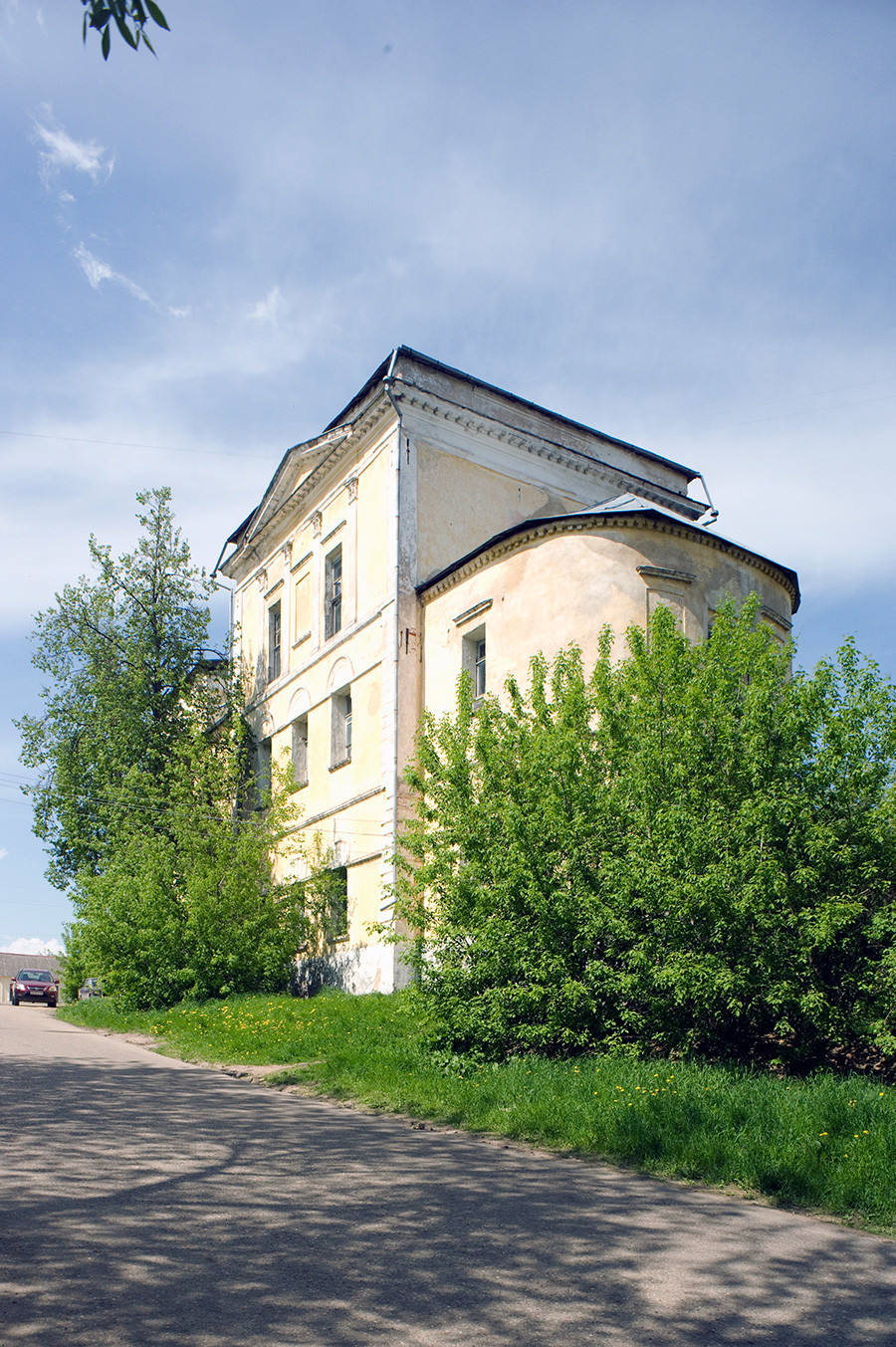 Most of the town's parish churches were also built during the same period.  And in 1815-1822 Torzhok's major cathedral, the Transfiguration of the Savior, was rebuilt overlooking the Tvertsa River to a plan by the great Petersburg architect Carlo Rossi. The neoclassical cathedral's bright yellow walls with white trim attracted Prokudin-Gorsky’s attention, as did the adjacent Church of the Entry of Christ into Jerusalem, built by Ivan Lvov in 1840-41.

With the altering of trade and industrial patterns in the 19th century, Torzhok's prosperity waned, and by the end of the century, it had again slipped into the status of minor provincial town, a faded beauty. By the time of Prokudin-Gorsky’s visit, it had almost 14,000 inhabitants.

War and its aftermath 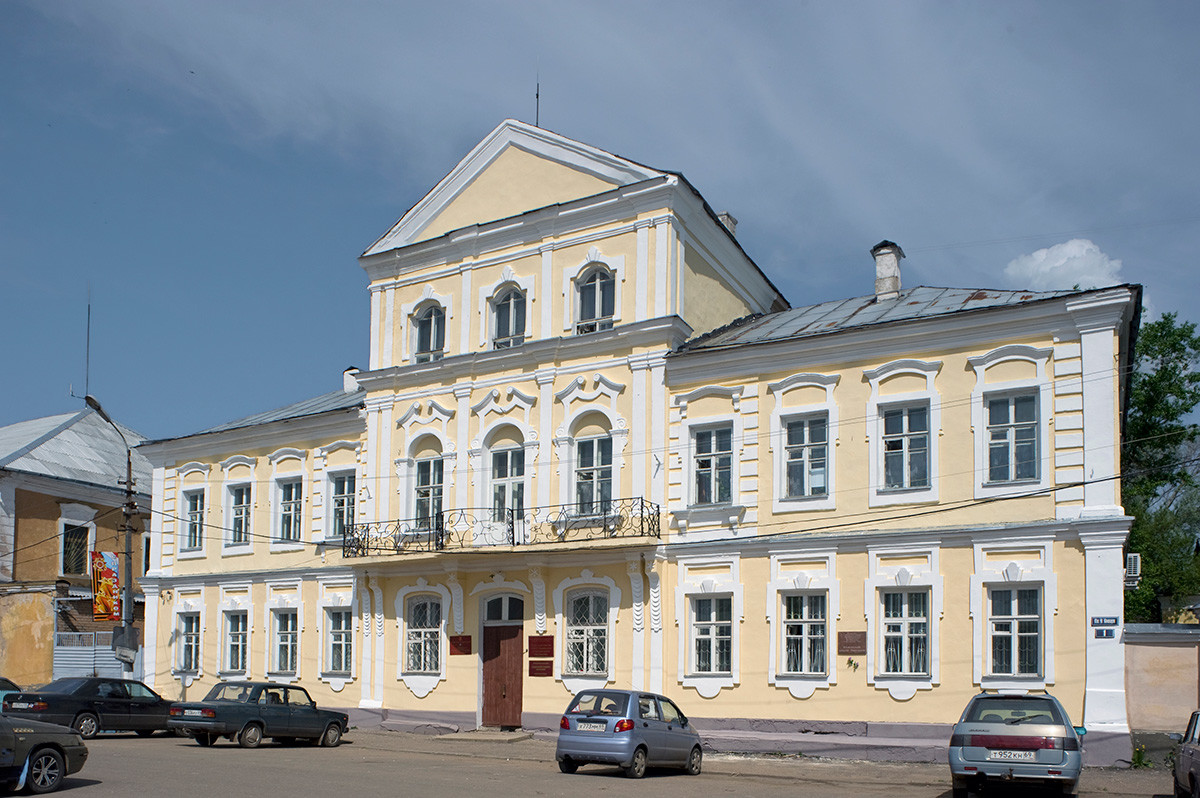 But its tranquility was illusory. After years of slaughter and defeat on the eastern front during the First World War, a war-weary, disillusioned populace turned first against the tsarist regime, in March of 1917, and then against the war policy of Alexander Kerensky's Temporary Government in the fall of 1917.

Torzhok was no exception. Because of its location near two rail lines, the town served as quarters for the several thousand soldiers of the 293rd infantry regiment.  After some units were shipped to the front to continue a bitterly unpopular war, disaffection spread among the remaining soldiers, who rallied to the support of the new soldiers' councils, or soviets. Torzhok thus became one of the flash points that led to support for the Bolshevik coup. 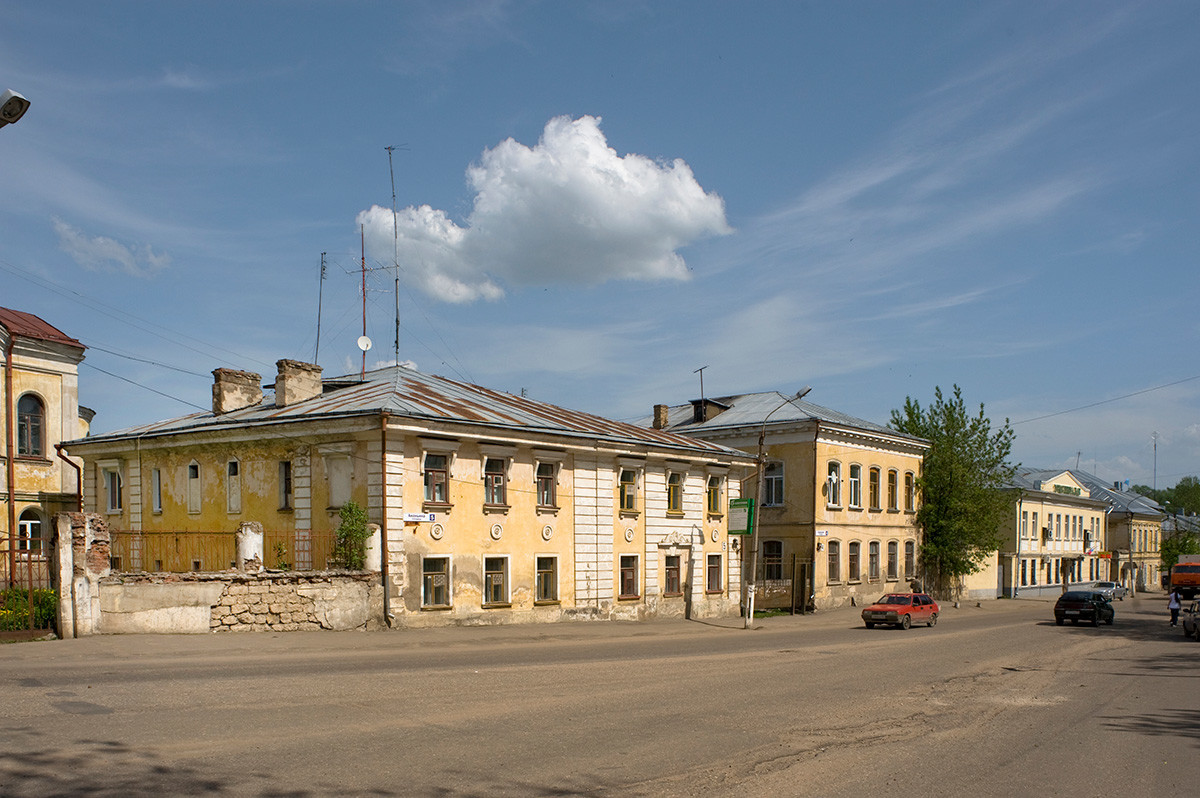 In the aftermath of the civil war, Torzhok returned to a semblance of economic life. The town experienced the growth of industries involved with metal working and railroads. This progress, however, was cut short in the fall of 1941, when the town suddenly found itself near the front lines to the north of Moscow.

During the latter half of October, German aviation subjected the town to an intense bombing that destroyed many houses and most of the central market area. A Red Army counteroffensive soon liberated the surrounding area, and Torzhok evaded further danger. Only in the beginning of February 1942 were inhabitants allowed back into town to begin rebuilding. 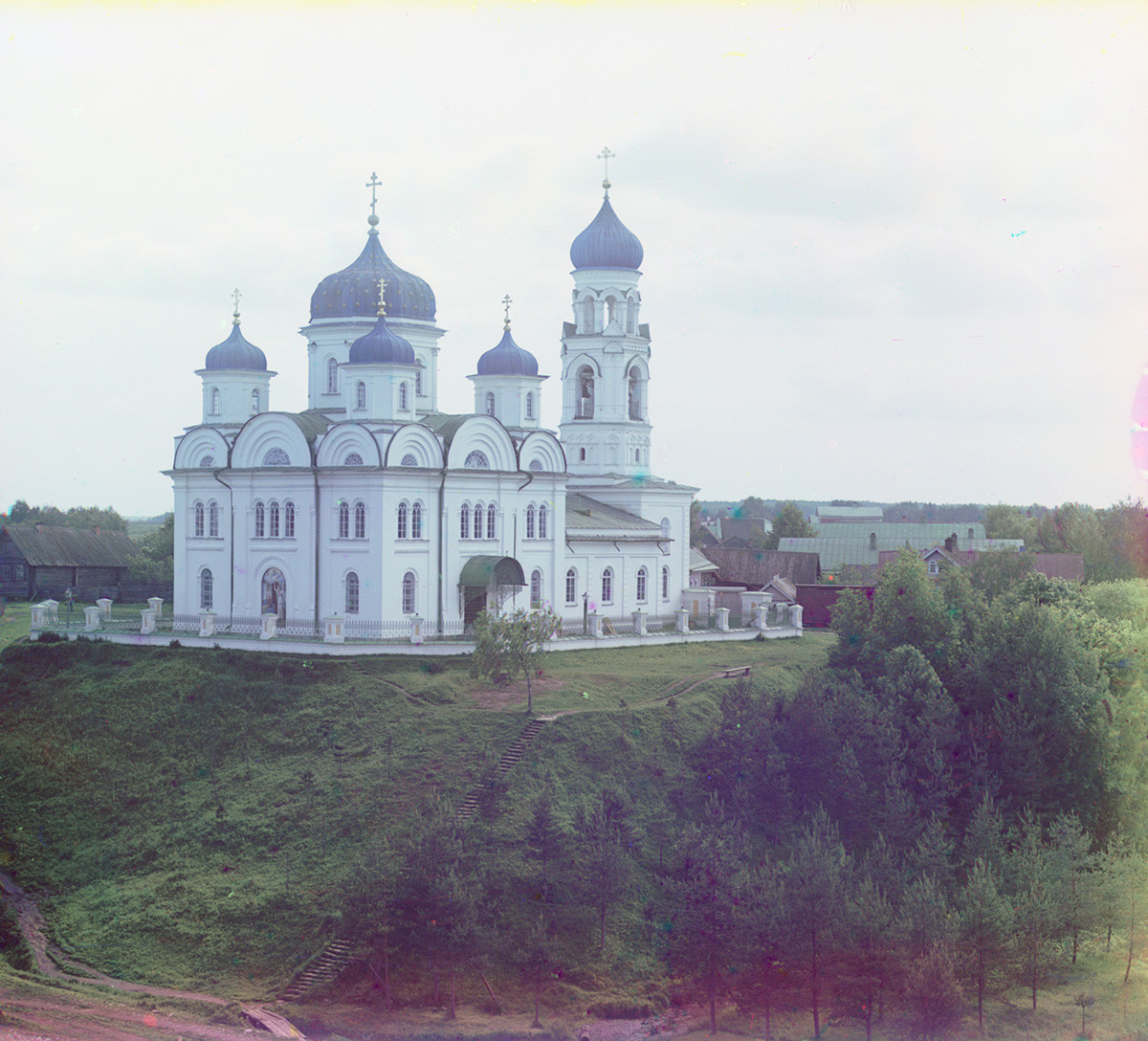 With a current population of some 44,000, Torzhok has maintained its status as a secondary industrial center, and it still benefits from the main Moscow-St. Petersburg highway. Despite chronic underfunding, progress has occurred in area of historic preservation, but much basic work remains in order to maintain and restore the town’s rich architectural heritage. 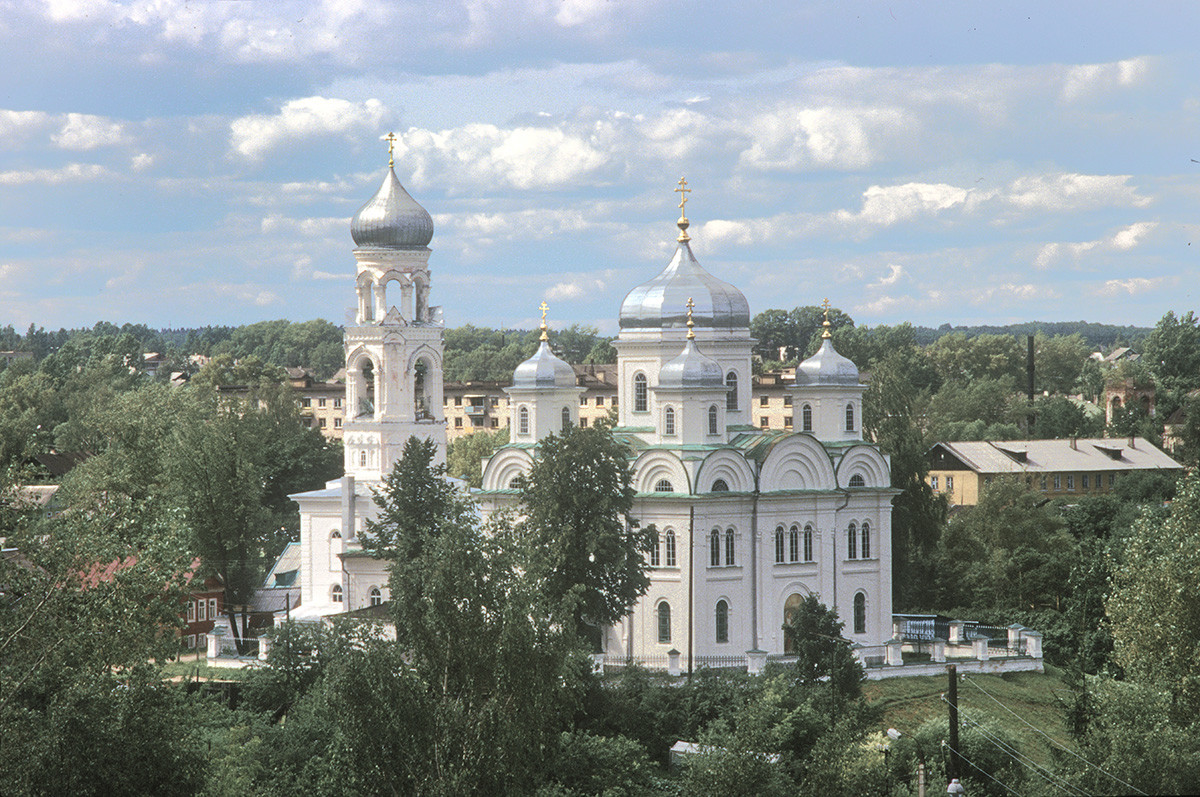