The turbulent history of Belgorod, citadel of southwest Russia 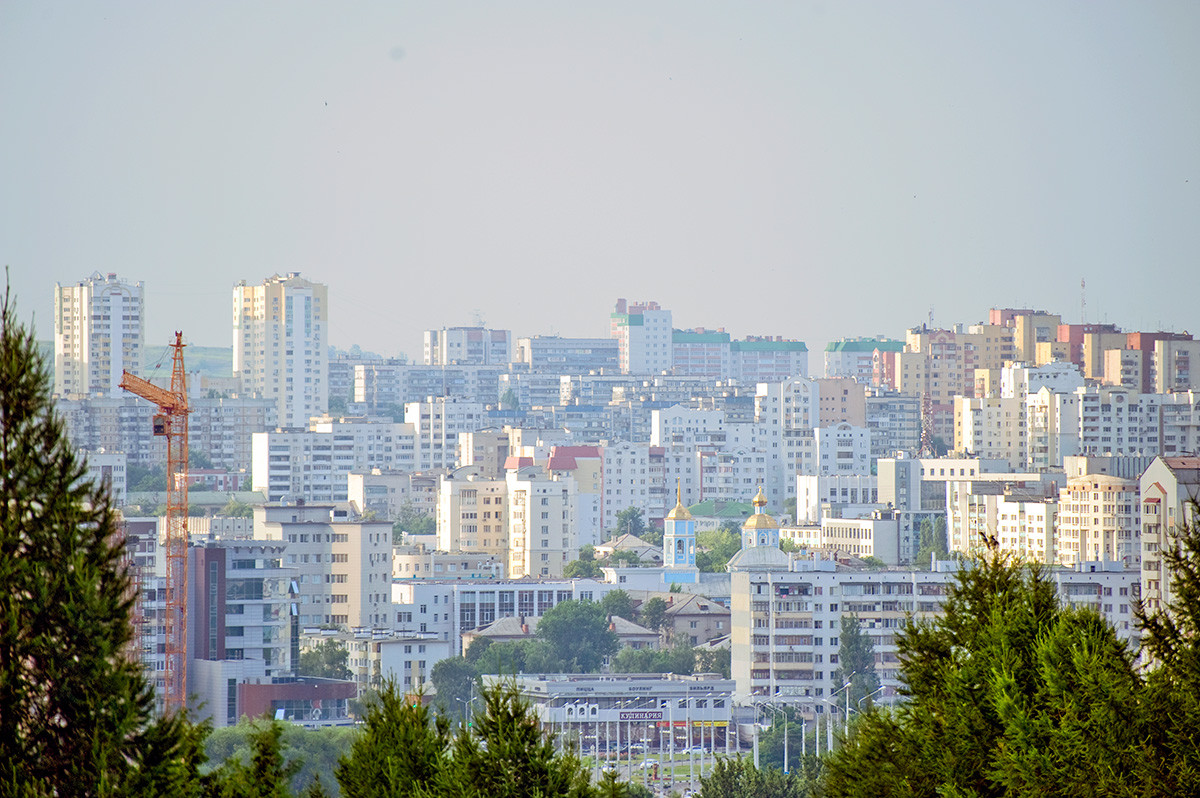 The town of Belgorod (“white town”) near Russia’s western border gets its name from the nearby white chalk hills, part of a distinctive geological feature of Campanian age formations in southwestern Russia. The city (current population 394,000) is situated on the River Vezyolka near its confluence with the Seversky Donets, which flows south into Ukraine, past Donetsk, before reentering Russia near Rostov-on-Don. The border is only 40 km to the southwest, thus making Belgorod the closest major Russian city to Ukraine.

In early September 1911, Russian chemist and photographer Sergey Prokudin-Gorsky visited Belgorod to document the celebration of the canonization of a local bishop. My own visit in June 2015 reveals a Belgorod much altered by 20th-century cataclysms. 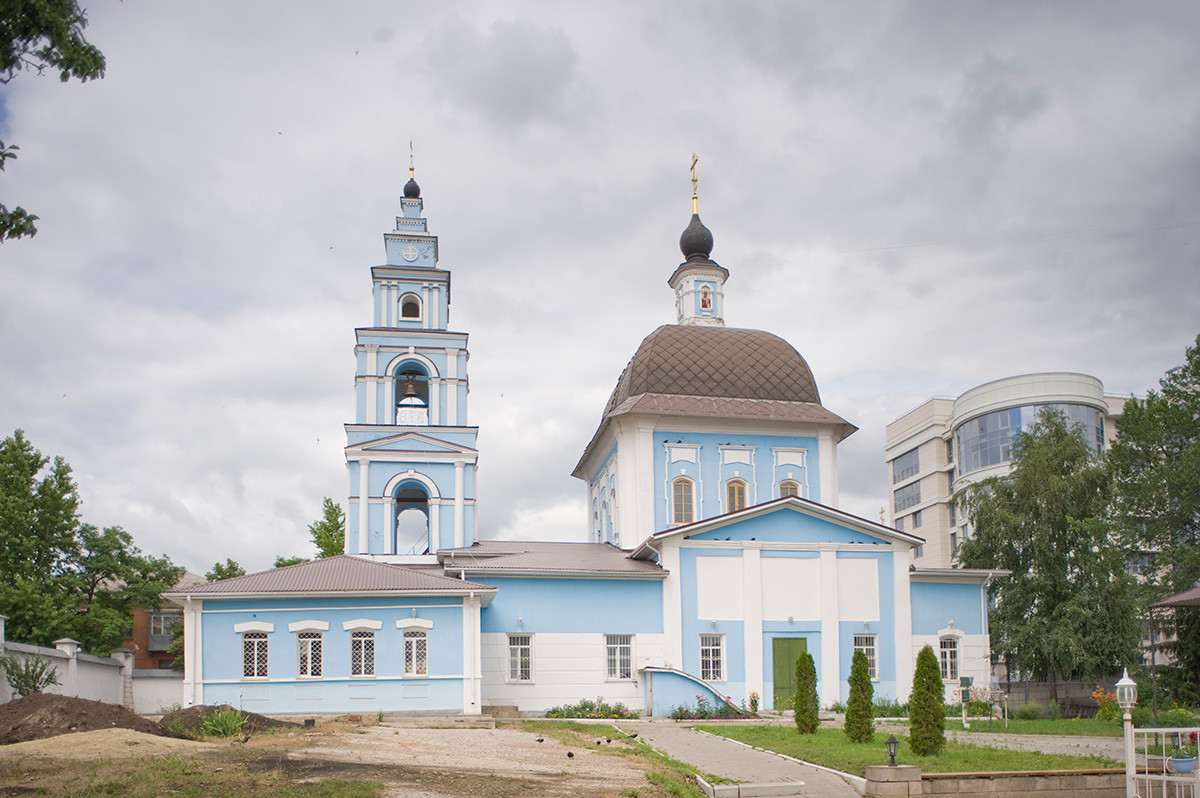 Church of the Intercession of the Virgin, Mary-Martha Convent. South view. June 24, 2015

Protector of the borderlands

Belgorod is generally considered to have been founded in 1593 (or 1596) during the reign of Tsar Feodor (1557-98), son of Ivan the Terrible and last ruler in the Riurikovich dynasty. With the advice of Boris Godunov, Feodor developed a series of fortified settlements intended to protect Muscovy’s southern borderlands. The Belgorod fortress became the anchor in what was known in the 17th century as the Belgorod Line, an important bulwark against incursions by Crimean Tatars. 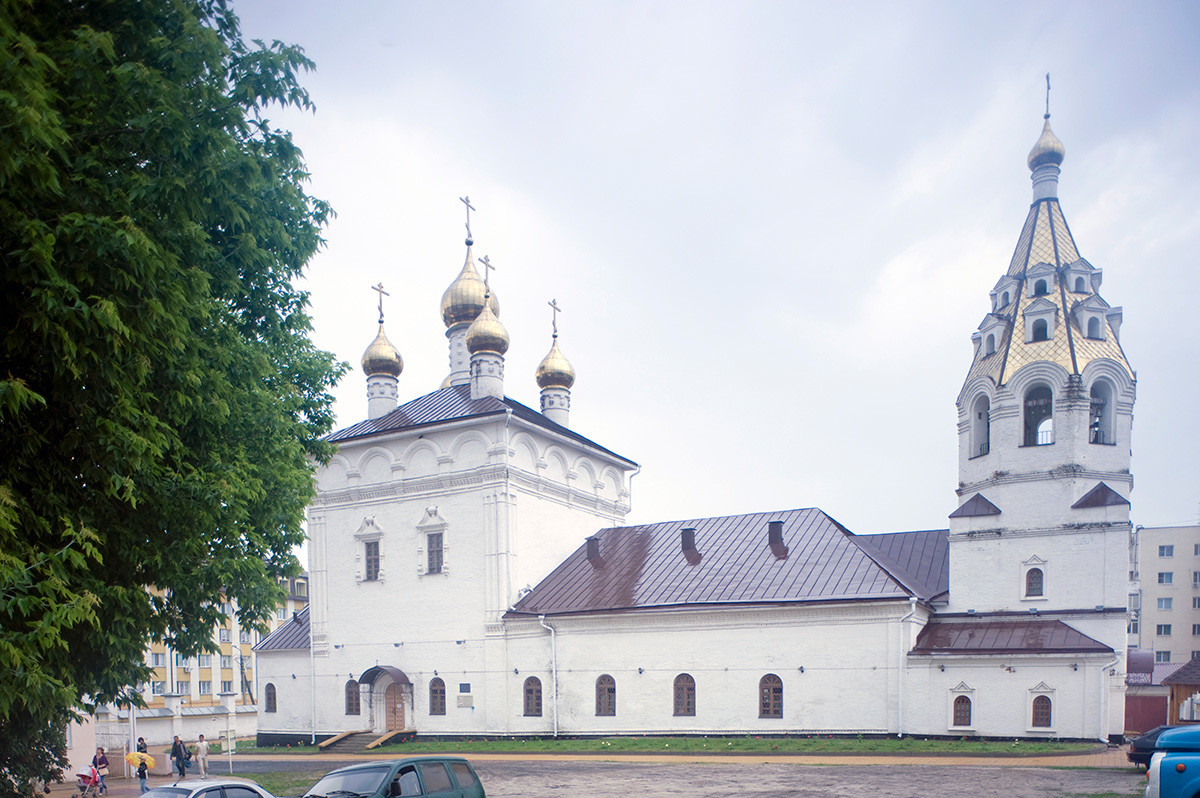 In 1612, the fortress established by Tsar Feodor was seized and burned by Polish forces during a dynastic crisis known as the Time of Troubles. Rebuilt at a slightly different location, the fortress was frequently attacked in the first half of the 17th century.

With the absorption of Ukrainian lands (the Hetmanate) into the Muscovite state in the latter part of the 17th century, the military significance of Belgorod decreased. In the 18th century it became a modest provincial administrative and trading center. 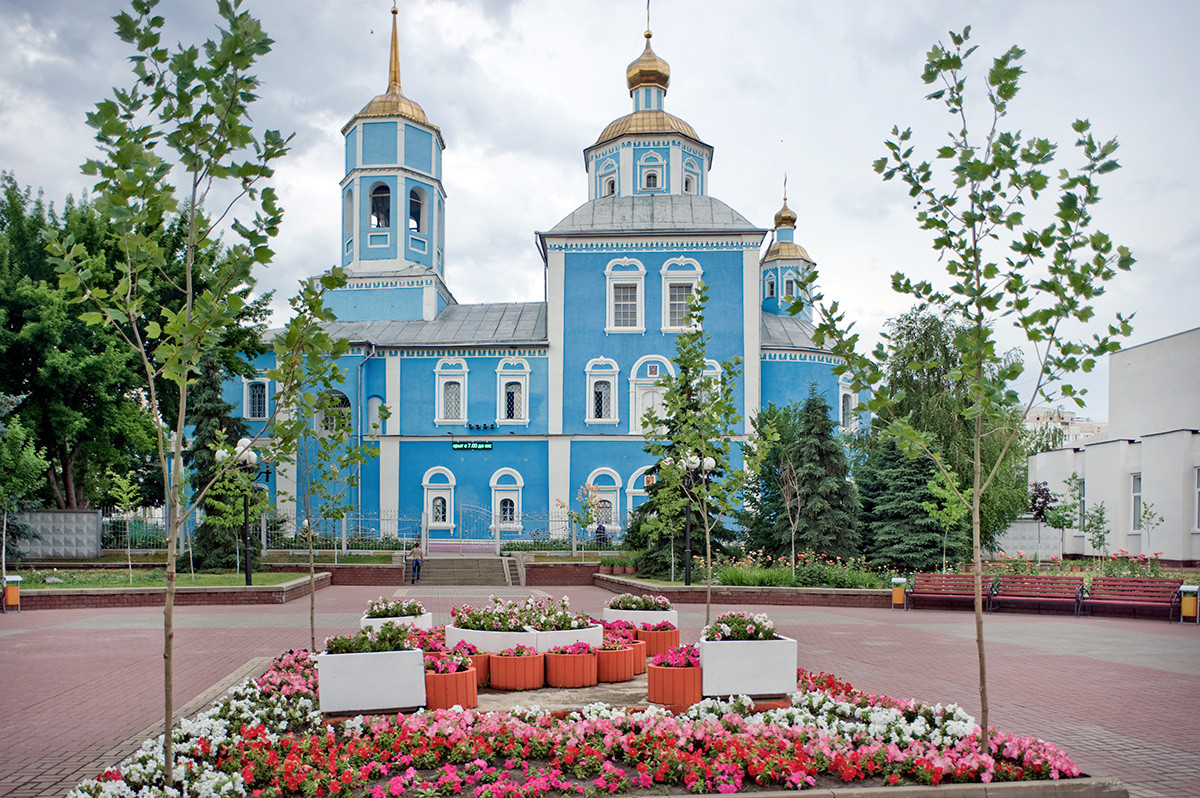 Cathedral of the Smolensk Icon of the Virgin. South view. June 24, 2015

Belgorod’s earliest surviving church is the Cathedral of the Dormition and St. Nicholas at the Mary-Martha Convent. Begun in the 1690s and completed in 1703, the cathedral’s construction benefited in 1701 from the donation of 100 rubles by Tsar Peter I (the Great). 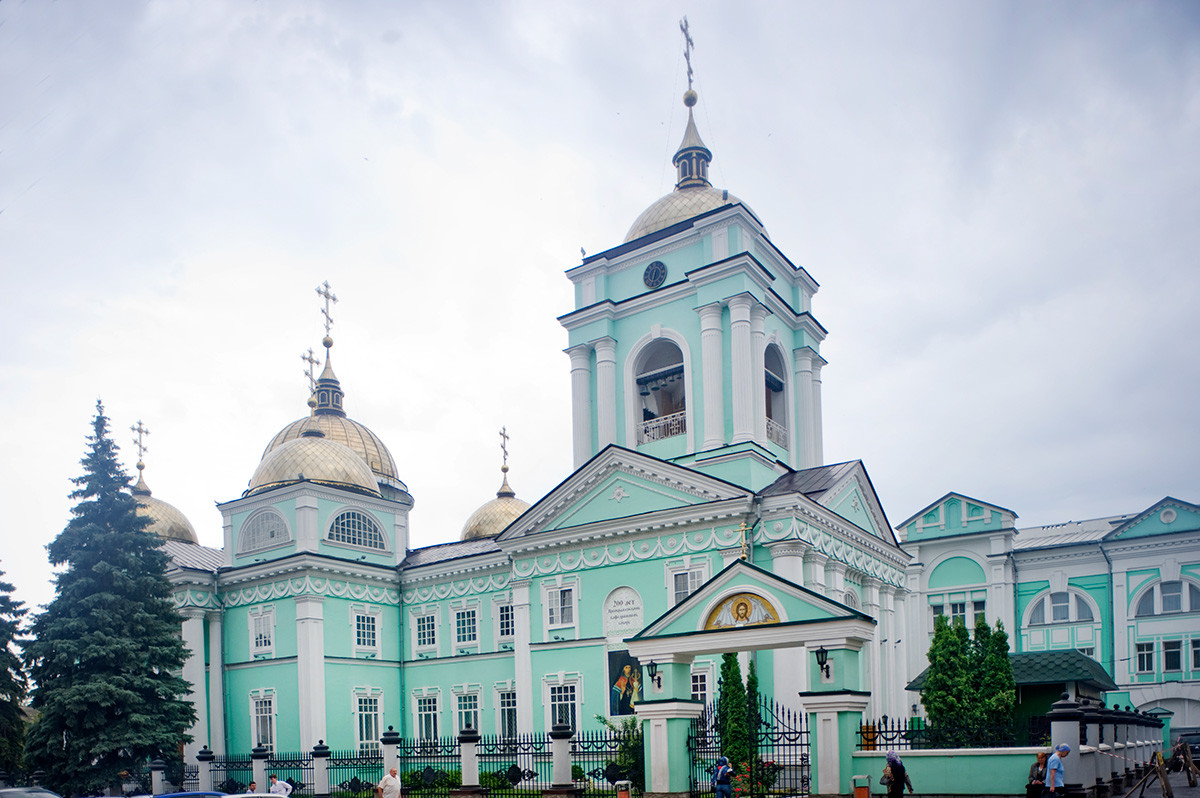 Severely damaged during the Soviet period, the cathedral was returned to the Orthodox Church in the 1990s and now has a new icon screen by the artist Alexander Rabotnov. The convent’s other major church, built in 1791, is dedicated to the Intercession of the Virgin. 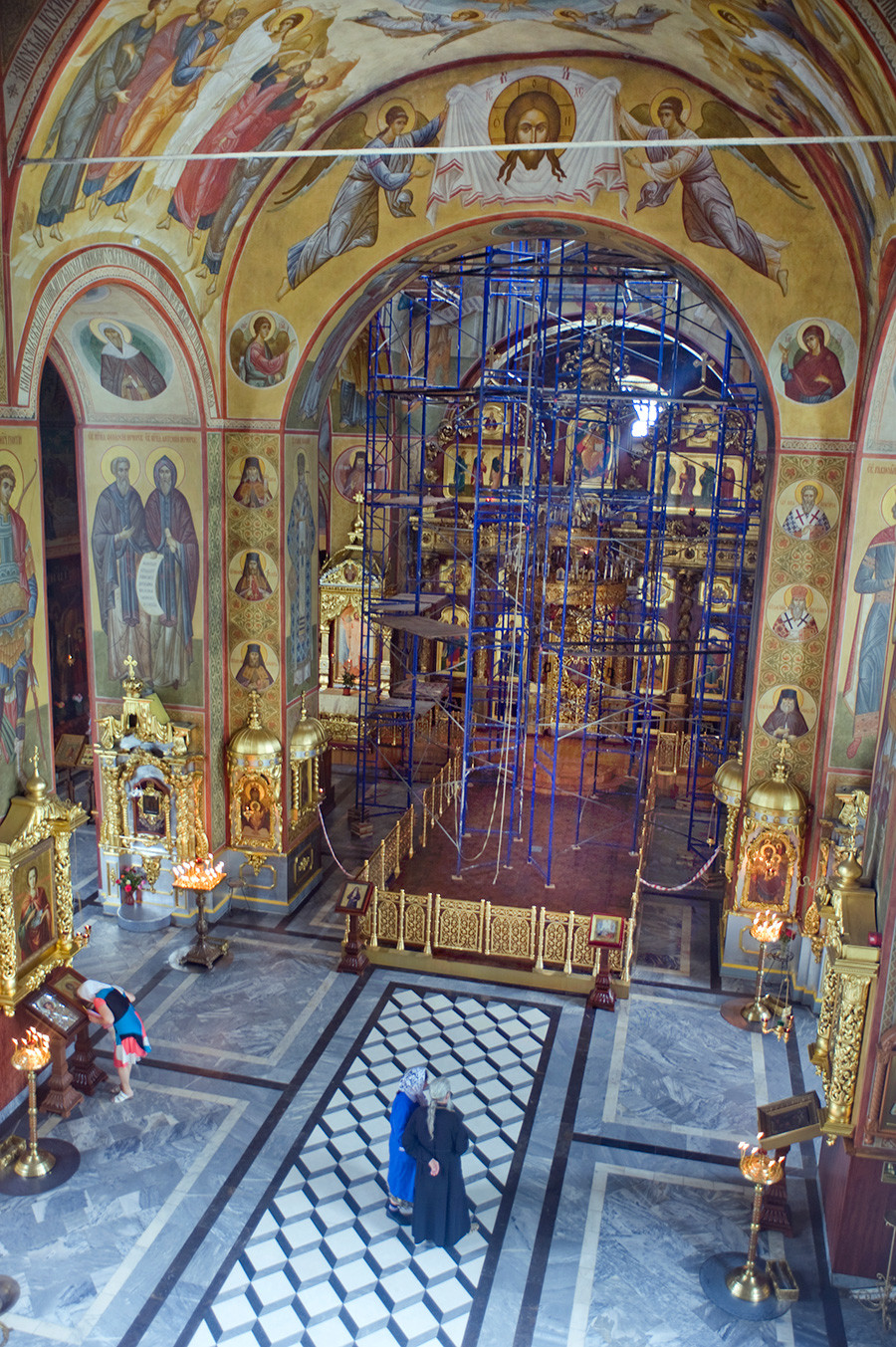 The primary shrine of Belgorod is the neoclassical Cathedral of the Transfiguration, consecrated in 1803. Closed in the late 1930s, the cathedral was reopened during the war and again closed in 1962 as part of the Khrushchev era anti-religious campaign. The cathedral was returned in 1992 and served as the center of the Diocese of Belgorod and Stary Oskol. 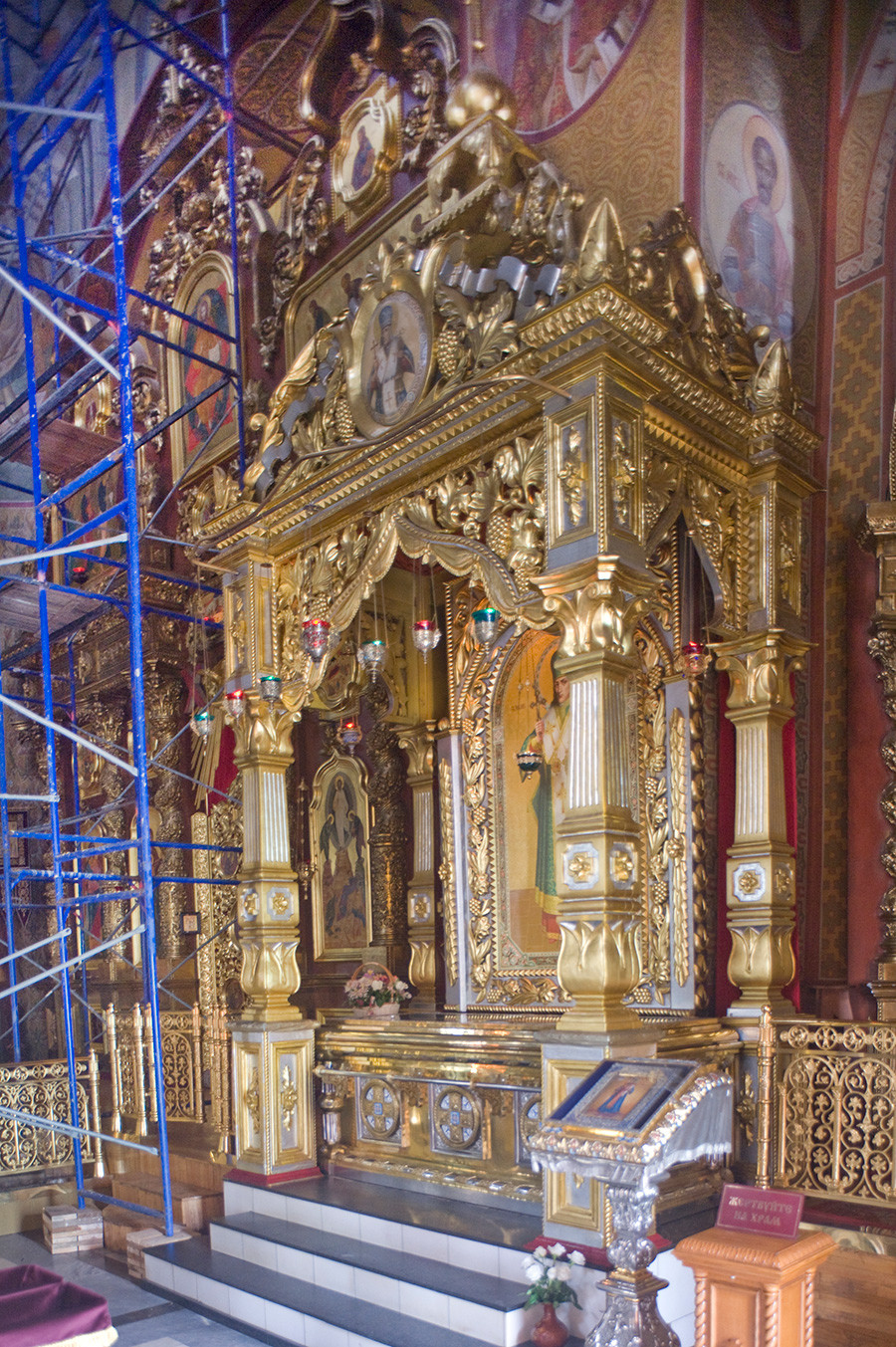 Cathedral of the Transfiguration, baldacchino with relics of St. Ioasaph, Bishop of Belgorod ( relics transferred from museum in 1991). June 24, 2015

A major stimulus to Belgorod’s development occurred in 1869 with the opening of a railroad station as part of the Kursk-Kharkov line. Additional lines to the south transformed Belgorod into a major rail junction.

With improved transportation, the region’s abundant chalk beds became an important industrial asset (much to the detriment of their archeological value). With an expanded industrial base, Belgorod’s population doubled to some 28,000 by 1913.

The railroad network also permitted Prokudin-Gorsky easy access during in a busy travel period in the fall of 1911. On Sept. 4 (in the “old style,” or Julian calendar, 13 days behind the Gregorian calendar used elsewhere in Europe) Belgorod hosted an event that attracted widespread attention — the solemn celebration of the recently canonized Ioasaph of Belgorod. 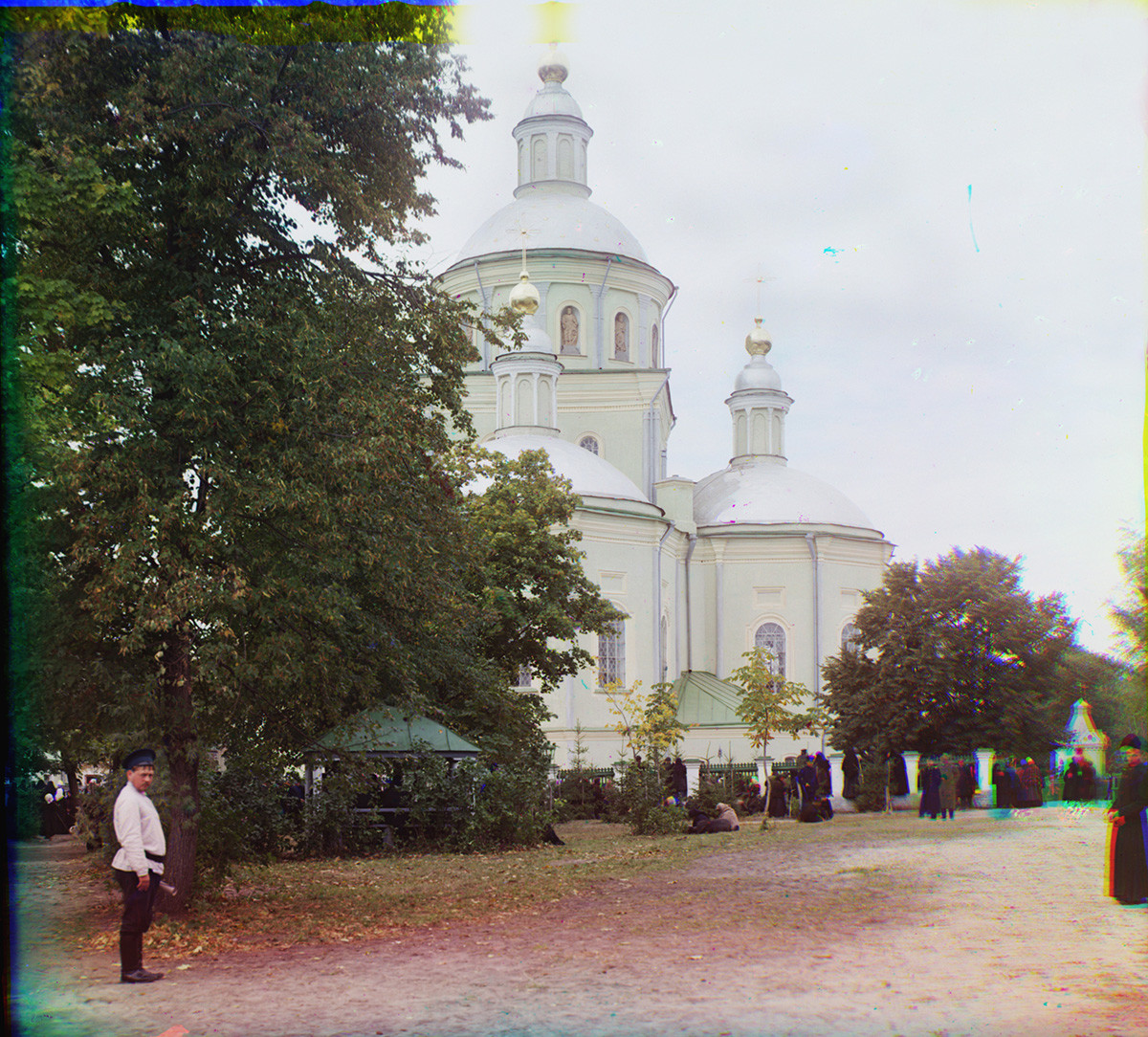 Bishop Ioasaph (Gorlenko) was born on September 8, 1705 in the Ukrainian village of Priluki. During the reign of Empress Elizabeth, he advanced rapidly in the Orthodox Church hierarchy and in 1748.was appointed Bishop of Belgorod and Oboyan.

During the relatively short period of six years, Ioasaph became widely venerated for his good works and effective pastorship. Upon his death in December 1754, his body was entombed in Belgorod’s Trinity Cathedral, built in 1690-1707 and subsequently the center of Trinity Monastery in the 19th century.

Over the ensuing decades, Ioasaph’s relics gained a reputation for miraculous healing properties, and a campaign for his sanctification gained momentum in the 1880s. In December 1910 the Holy Synod (the governing body of the Russian Orthodox Church) approved his sainthood, with the support of Nicholas II. 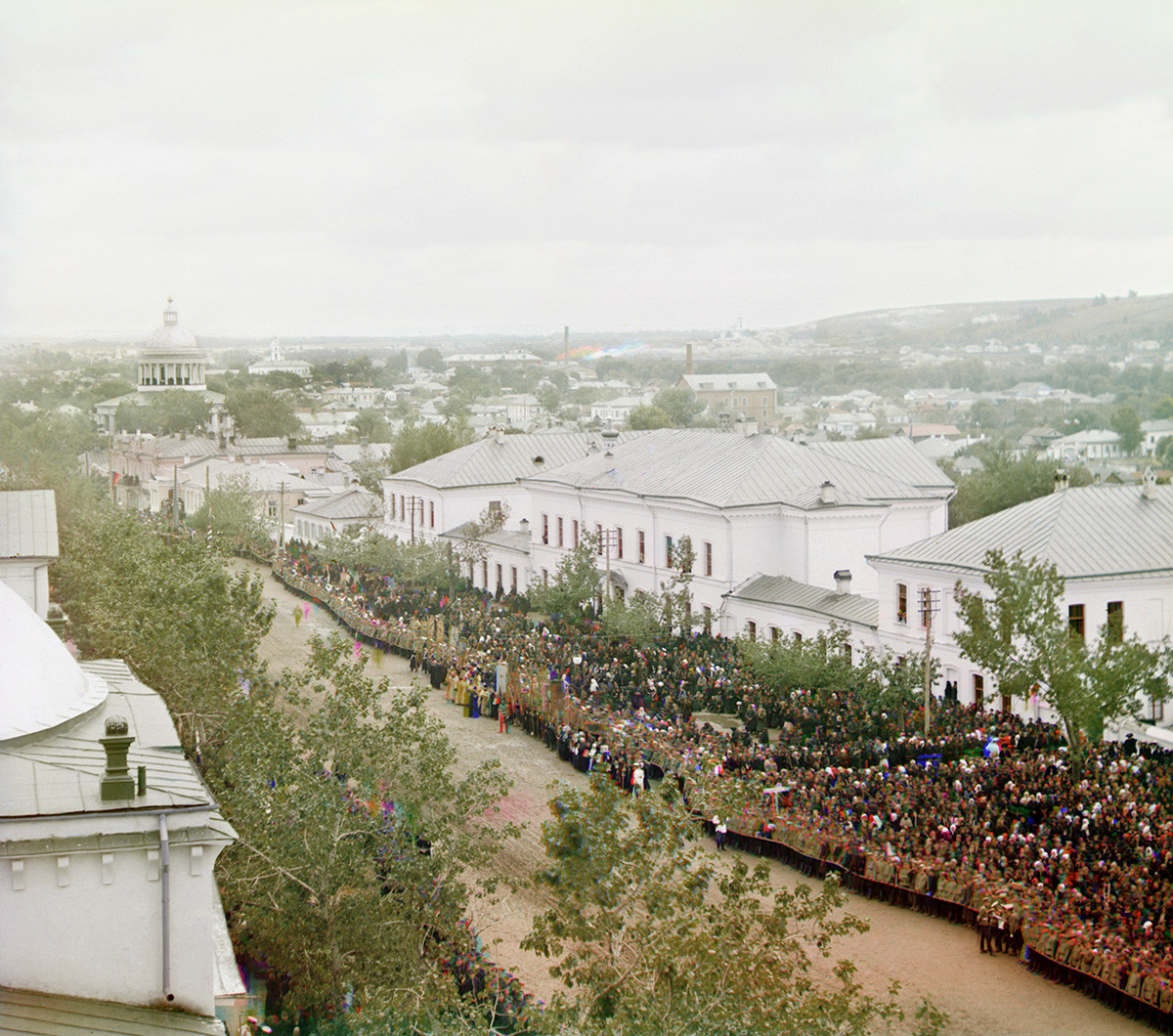 Cathedral Square, view east from Trinity Monastery bell tower on September 4, 1911. Dignitaries & crowds gathered for Procession of the Cross in homage to the canonization of St. Ioasaph. Left distance: domed Cathedral of the Nativity of the Virgin Convent

On the day of the ceremony in Belgorod, Prokudin-Gorsky made two photographs with his cumbersome box camera. One of the photographs shows the Trinity Cathedral, where Ioasaph’s relics were enshrined. The other, taken from the monastery bell tower, is one of Prokudin-Gorsky’s most remarkable, both as a historical document and for its depiction of masses along Cathedral Square waiting for the solemn Procession of the Cross. Some 200,000 people were estimated to have gathered for the ceremony celebrating Ioasaph’s canonization. This view shows throngs restrained behind a long cordon of military personnel in khaki tunics.

Just visible at the center next to clergy in ceremonial robes is the august personage of Grand Duke Konstantin Konstantinovich, who died in June 1915. Also in attendance was Grand Duchess Elizabeth Feodorovna, killed by the Bolsheviks in July 1918 and subsequently canonized. 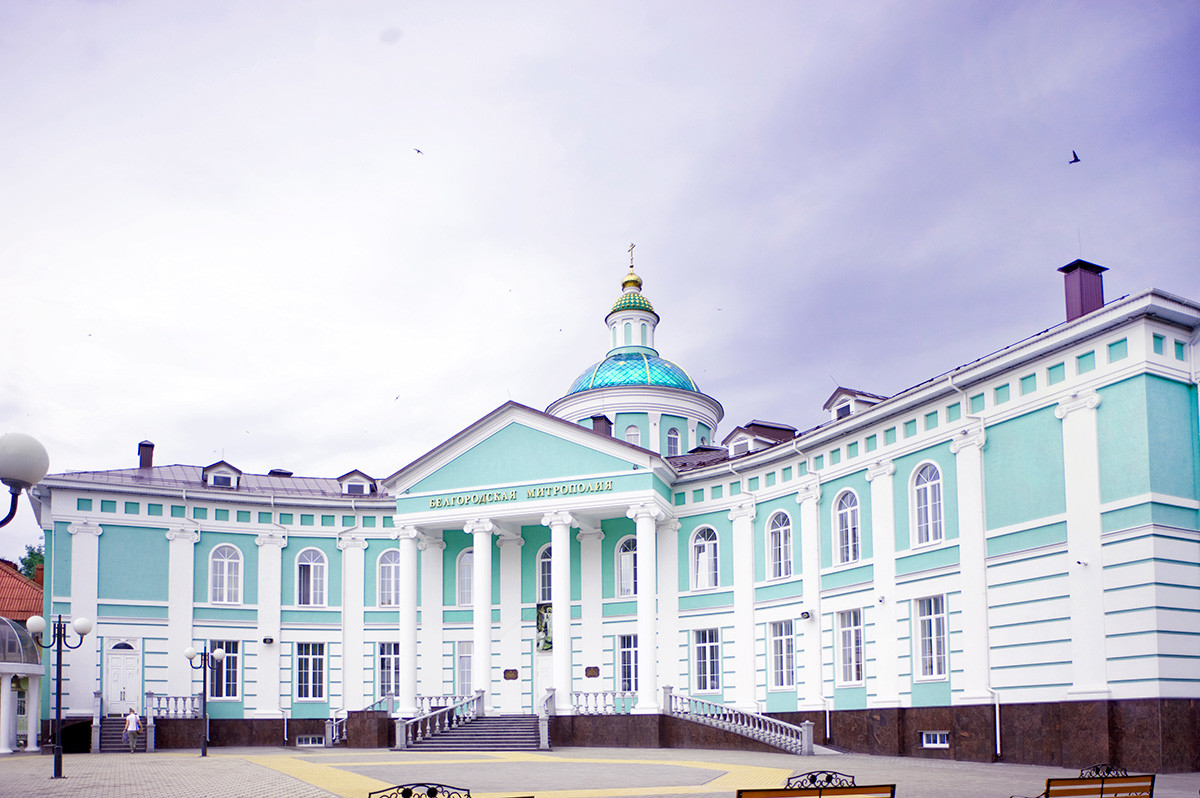 Headquarters of Belgorod Metropolitanate, with Trinity Church. Built on the site of Trinity Monastery. June 24, 2015

Not present, however, was Emperor Nicholas II, who had been in Kiev on a state visit a few days earlier. Accompanying him was Prime Minister Pyotr Stolypin, who was shot on Sept. 1 (old style) by a terrorist in front of the tsar during a performance of Rimsky-Korsakov’s opera “The Tale of Tsar Saltan”. 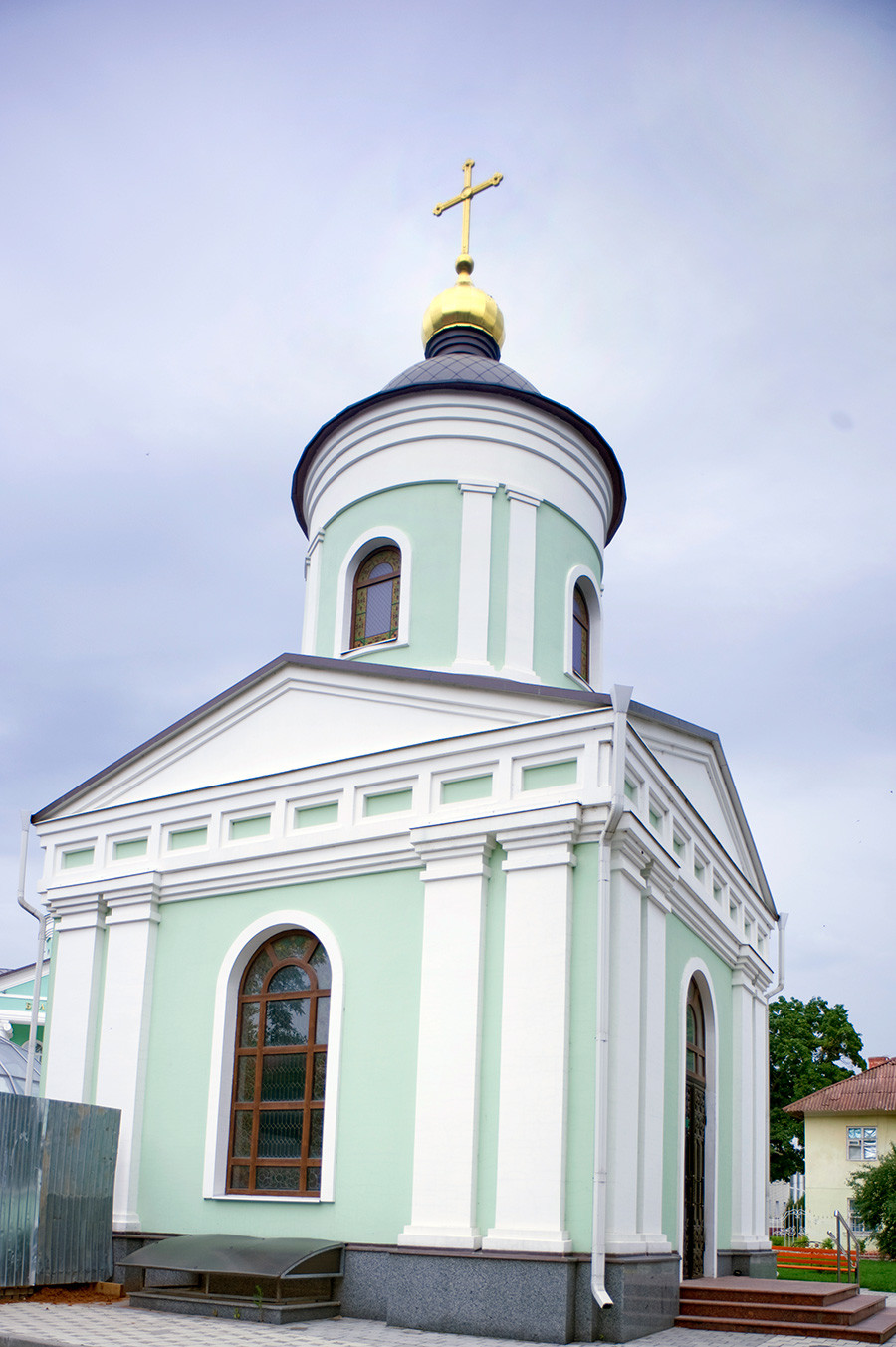 Chapel of St. Ioasaph of Belgorod. Built in 2011 on the site of Trinity Cathedral at the burial place of Ioasaph. June 24, 2015

Indeed, subsequent decades dealt harshly with everything depicted in Prokudin-Gorsky’s Belgorod views. The Trinity Monastery was closed in the early 1920s, and its cathedral was demolished in 1927. The relics of St. Ioasaph were transferred to a museum, and the remaining monastery buildings fell in the 1930s.

Prokudin-Gorsky’s view from the bell tower included the large neoclassical Cathedral of the Nativity of the Virgin, center of a convent of the same name. Closed in 1923, it was demolished over a prolonged period beginning in the 1930s. From a historical perspective, a dark cloud hangs over these photographs.

After the collapse of the Russian Empire in 1917, Belgorod witnessed frequent changes in power among warring factions — Red, White, Ukrainian. Soviet authority in the region was consolidated only by the end of 1922. Over the next two decades, almost all the town’s churches were closed, and many were destroyed.

Belgorod’s greatest ordeal occurred following the invasion of the Soviet Union by Nazi Germany on June 22, 1941. During the chaos of the Soviet autumn retreats, Belgorod was seized on Oct. 24 and converted into a highly fortified position with a major rail junction. 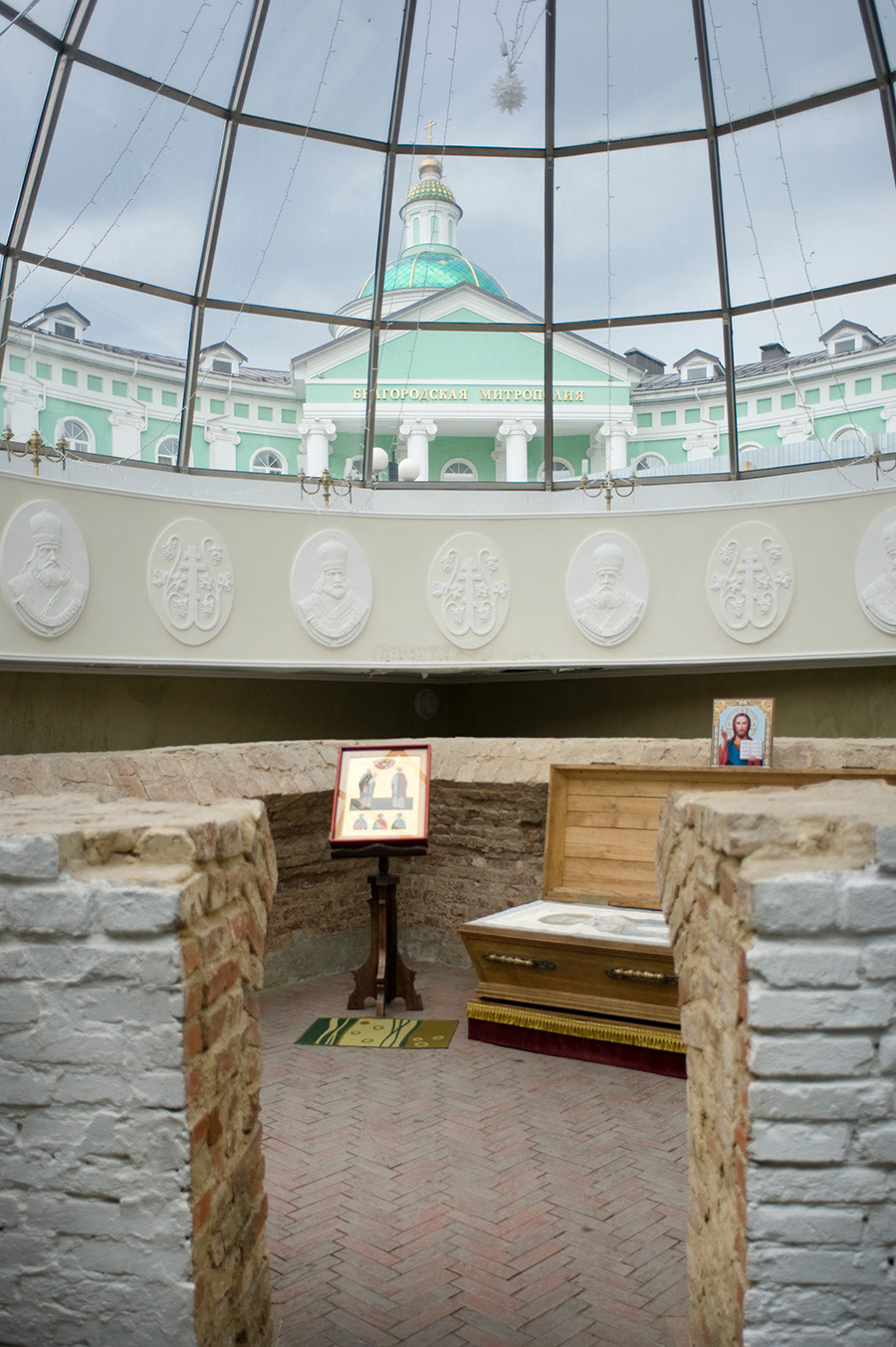 Burial crypt of Ioasaph, adjacent to the Chapel of St. Ioasaph. Located at the southwest part of the demolished Trinity Cathedral. Discovered by archeologists in 1911. Upper background: Belgorod Metropolitanate headquarters. June 24, 2015

After the German defeat at Stalingrad, the Red Army moved rapidly westward and retook Belgorod on Feb. 9, 1943. Within a month, however, overextended Soviet forces faced a German counteroffensive (the Third Battle of Kharkov), and on March 18, Belgorod again came under German control.

Following the Soviet victory at the mammoth Battle of Kursk in July 1943, Belgorod was liberated on August 5. In Moscow, a massive artillery salute celebrated the victory, thus launching a practice that continued for major victories. From that time Belgorod became known as the “City of the First Salute”. 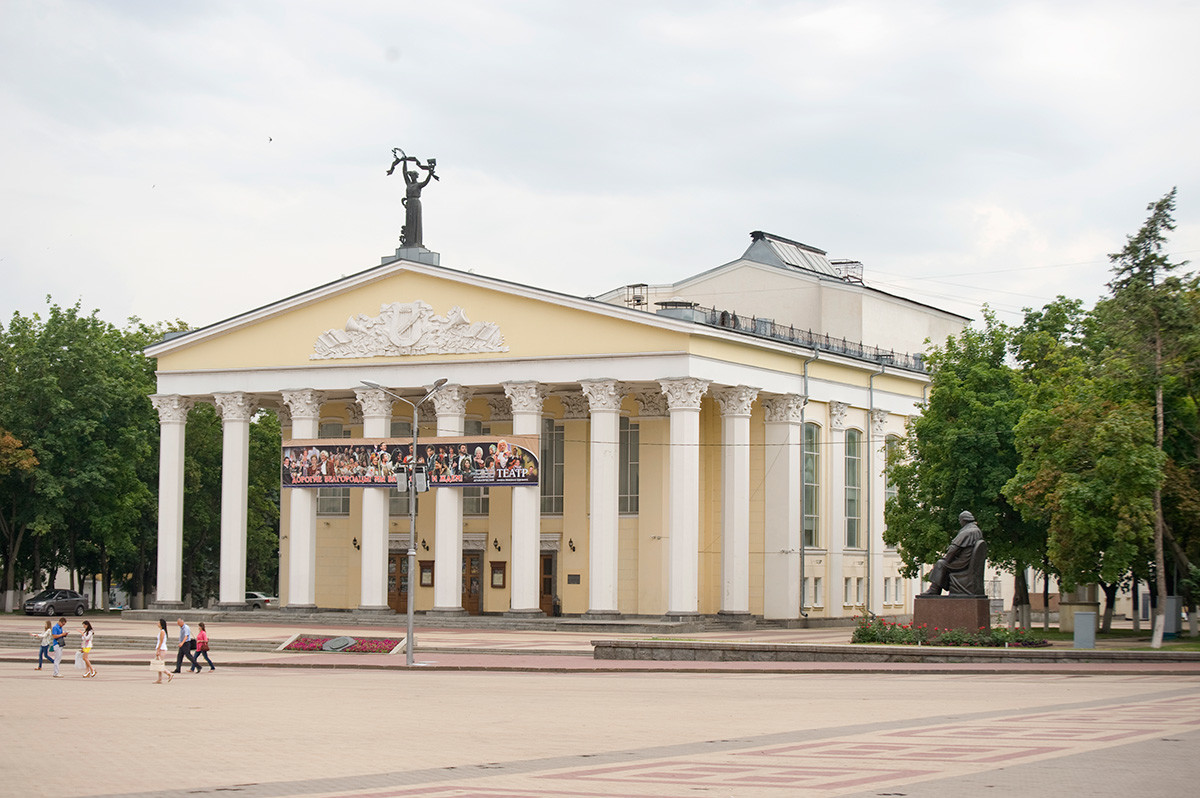 Shchepkin State Drama Theater, Cathedral Square. Built on the site of Convent of the Nativity of the Virgin (demolished during Soviet period). June 24, 2015

Almost every building in the central part of Belgorod was destroyed or severely damaged, although some churches survived. Massive reconstruction efforts revived Belgorod’s status as an important regional center. Beginning in the 1990s, the Orthodox Church played a prominent role in the restoration of surviving churches and the construction of new ones.

The heart of Belgorod now centers on a renamed Cathedral Square, originally called Revolution Square — a major component of the city’s post-war reconstruction. The square’s north flank is occupied by the grandiose Regional Administration Building, which includes Philharmonic Hall. 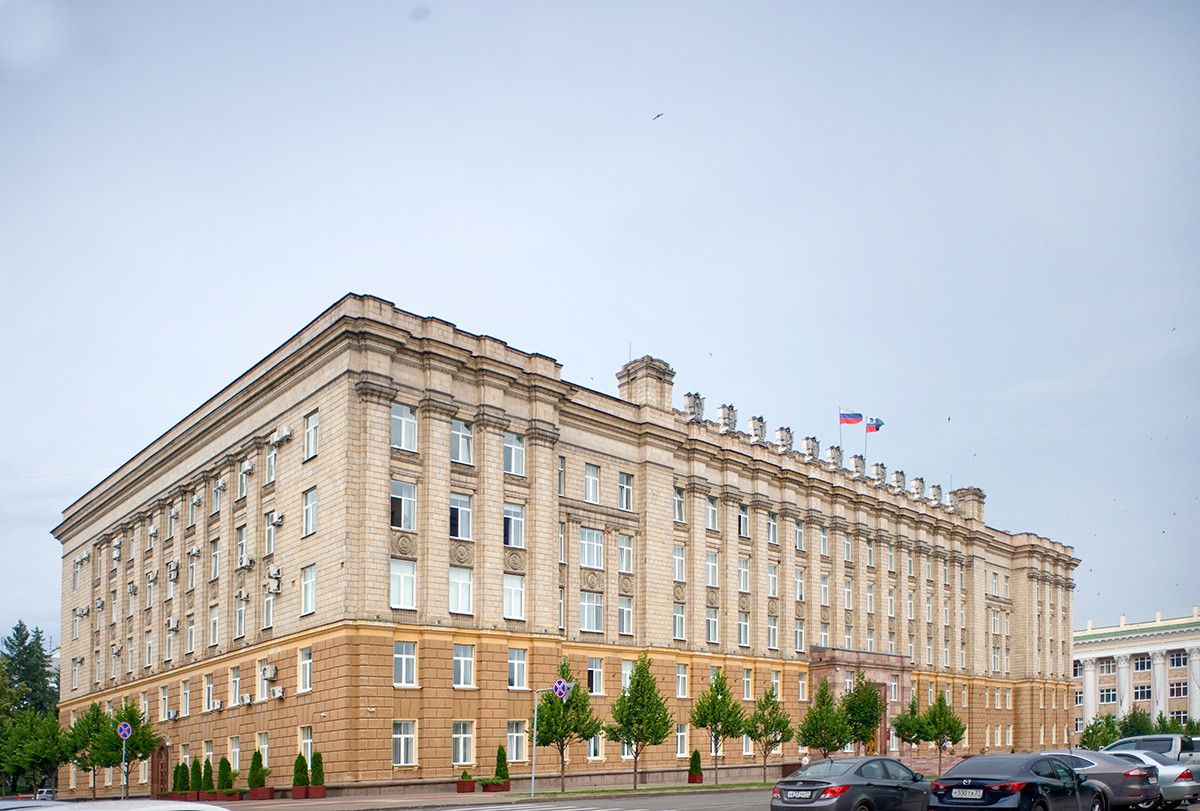 On the opposite side of Cathedral Square is the neoclassical Drama Theater, built in the 1950s on the site of the demolished Nativity of the Virgin Convent. The square’s west side is marked by the Eternal Flame, a memorial to sacrifices during the Great Fatherland War.

As for the Trinity Monastery, its site is now occupied by a new Trinity Church, part of the administrative center for the Belgorod Metropolitanate. The complex also includes the foundation outlines of the destroyed Trinity Cathedral and the excavated crypt where Ioasaph was originally buried.

Within this space, a chapel dedicated to St. Ioasaph was completed in 2011 in homage to the centennial of his canonization. Thus, the event so vividly recorded by Prokudin-Gorsky in 1911 has been transformed on a new level of memory. 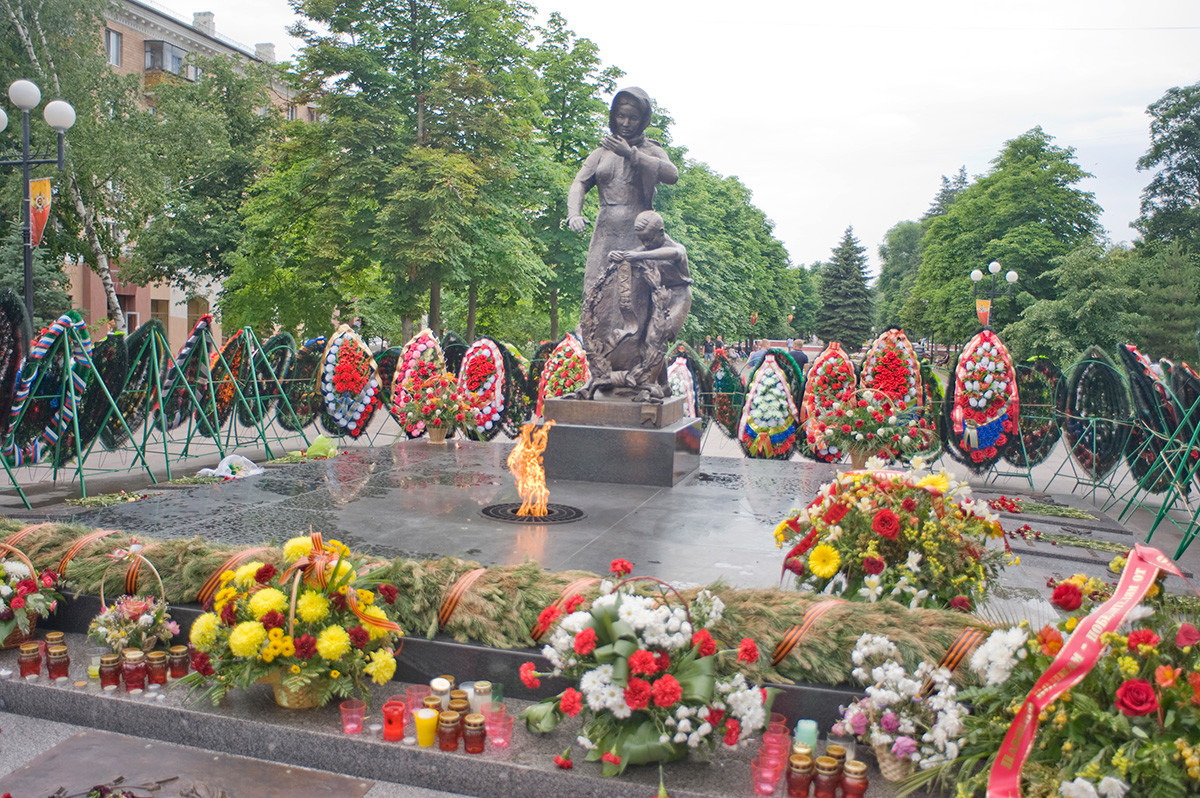