Rzhev: Provincial beauty resurrected from the ashes of war 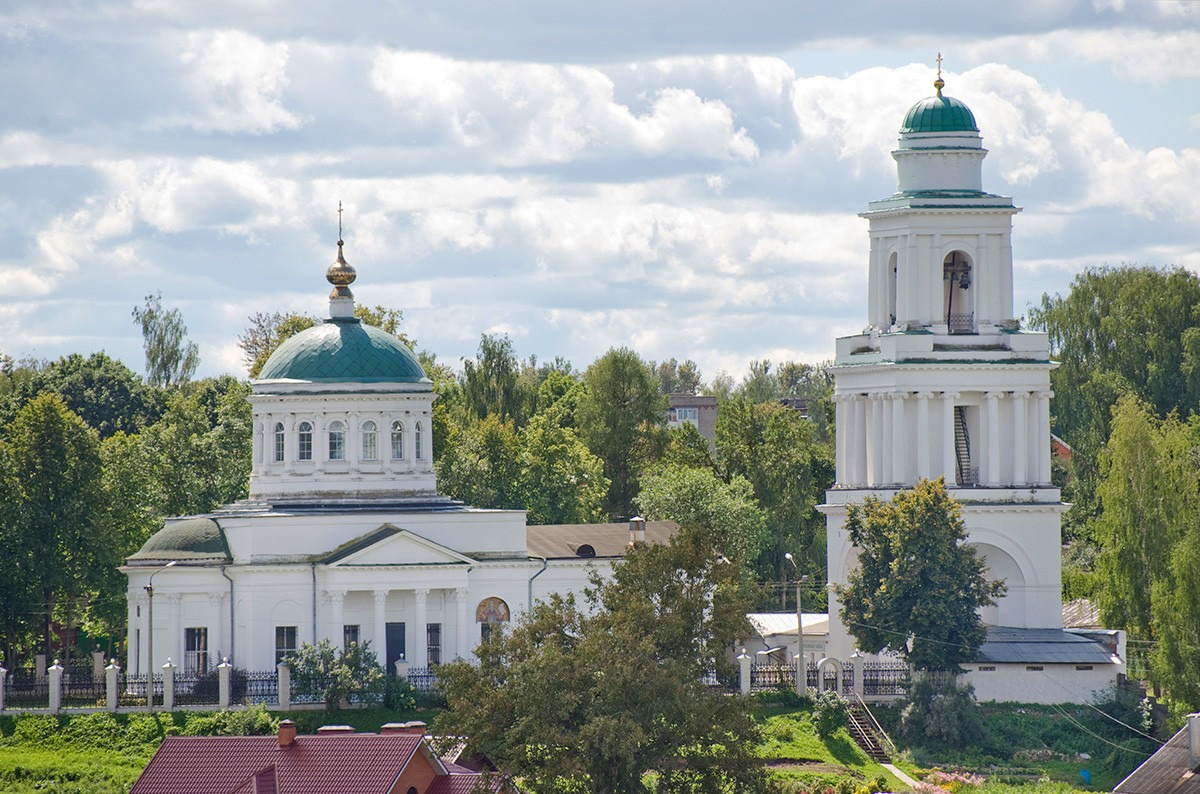 Rzhev. Cathedral of the Okovetsky Icon of the Virgin. North facade seen across Volga River. August 13, 2016.

Rzhev, a regional commercial center on the upper Volga River in the Tver Region, is no stranger to conflict. First referred to in written sources under the year 1019, the fortified settlement frequently changed hands between Lithuania and Russian principalities over the following four centuries. In 1521, Rzhev was finally absorbed by Muscovy, yet at the beginning of the next century the town was torn by warfare during a dynastic crisis known as the Time of Troubles. 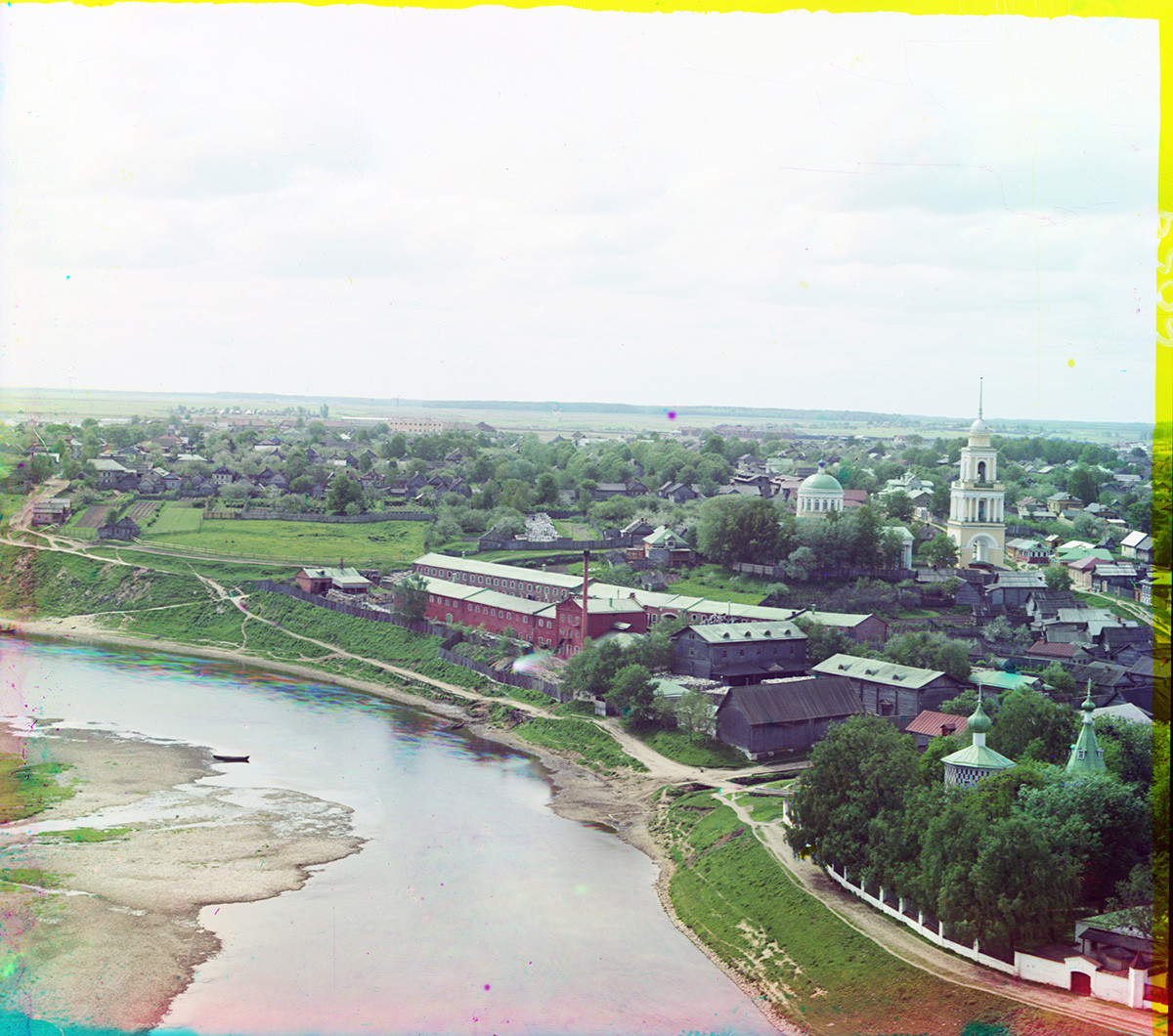 Rzhev. View of Prince Dmitry Side across Volga River. Right: Cathedral of the Okovetsky Icon. Summer 1910.

In the early summer of 1910, Russian chemist and photographer Sergei Prokudin-Gorsky visited Rzhev as part of his project to use his unique photographic method to document the diversity of the Russian Empire. His panoramas taken from bell towers are remarkable in their ability to convey the seemingly placid charm of this provincial river town. Sadly, many of the buildings in his photographs were destroyed during fierce fighting in the area during World War II. 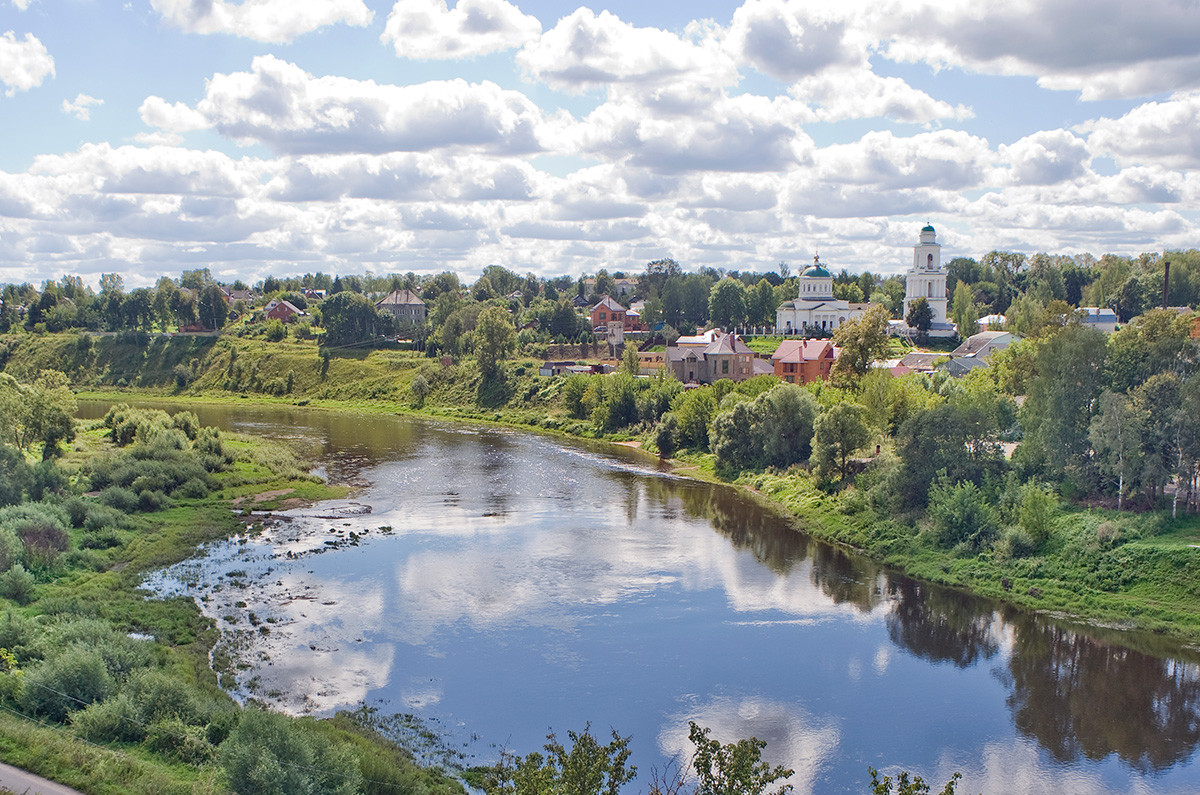 As the first major town on the upper Volga River, Rzhev prospered in the 18th and early 19th centuries. The Volga divided the town into two parts, which were known traditionally as the Prince Fyodor Side (left bank) and the Prince Dmitry Side (right bank), after the son and nephew of Prince Boris of Tver, who ruled the town in the mid 15th century. This division is evident in one of Prokudin-Gorsky’s views down the river. 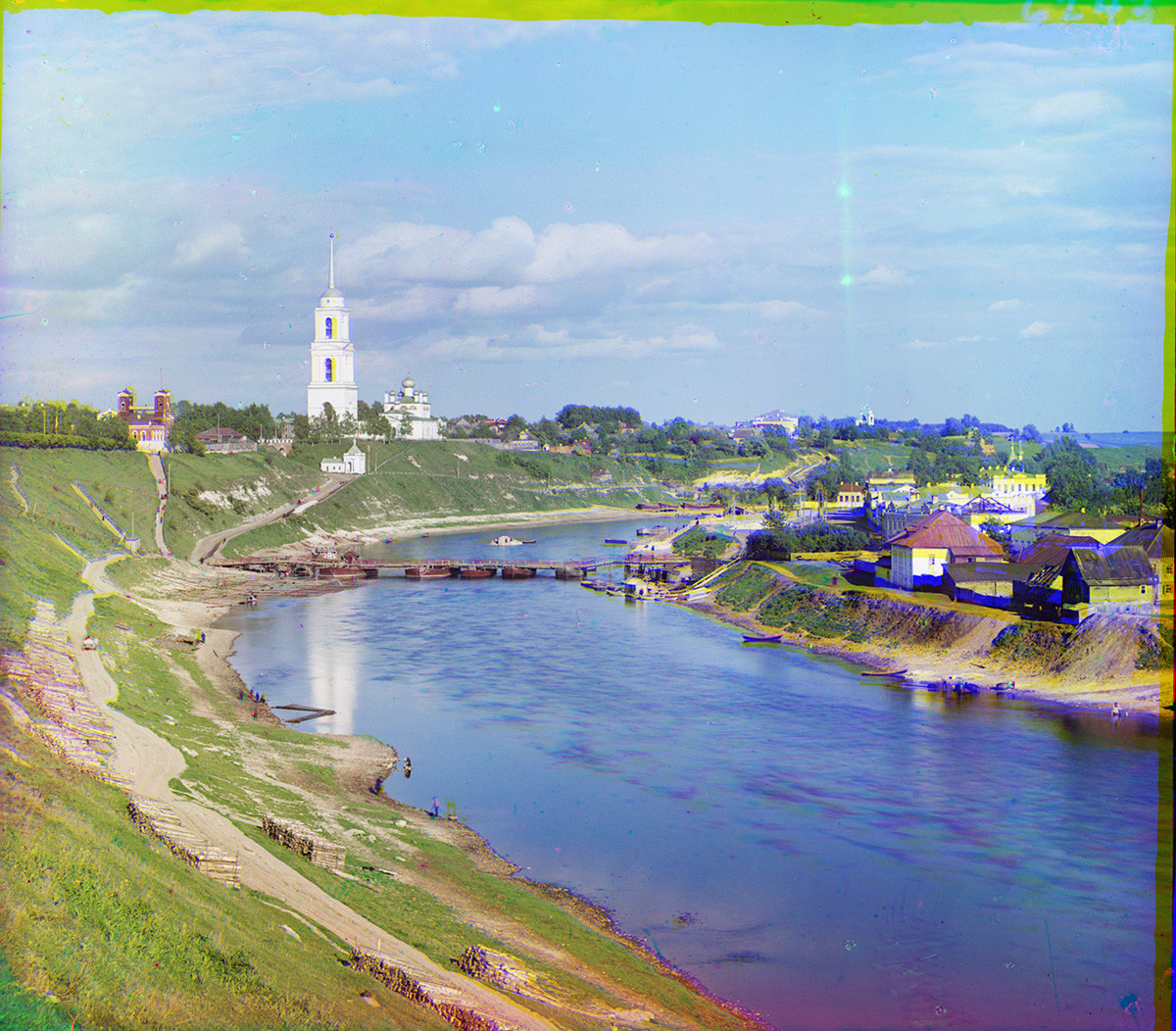 Rzhev became an important transportation hub for the provisioning of St. Petersburg, and its workshops provided sails and implements for the Russian fleet until the 19th century, when the development of railroads in the 19th century diminished its role.

Old Believers were a dominant force in Rzhev’s commercial development. These Christians rejected liturgical reforms promulgated by the Russian Orthodox Church in the middle and late 17th century. Although most Old Believer sects were prohibited from building prominent places of worship during the 19th century, they congregated on the Prince Dmitry Side. 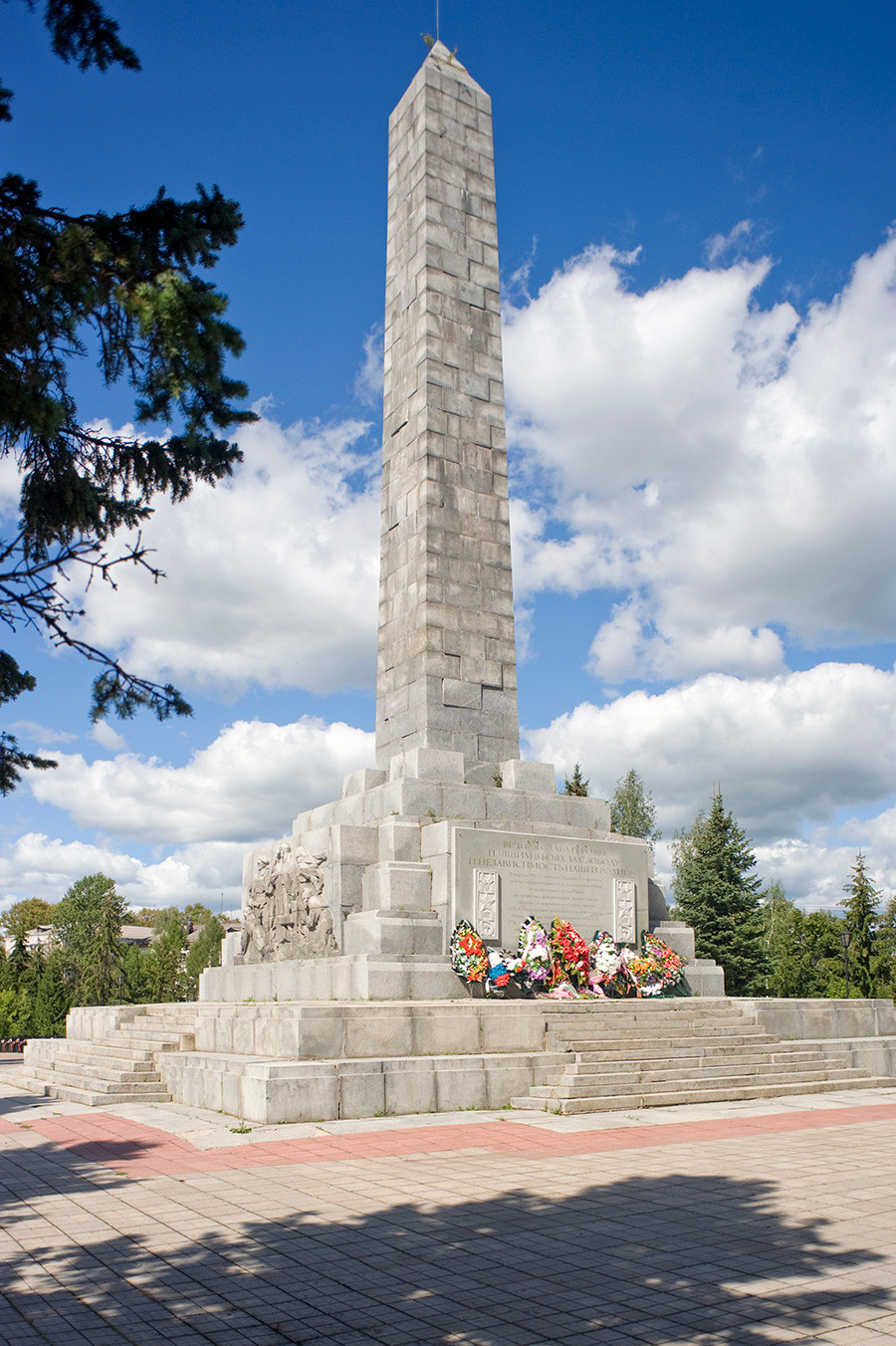 Obelisk to the Liberators of Rzhev on Cathedral Hill (site of destroyed Dormition Cathedral). August 13, 2016.

Among Prokudin-Gorsky’s photographs is a view of the Prince Dmitry Side with warehouses and small factories along the right bank of the Volga. On the far right is the Church of the Vladimir Icon of the Virgin (since destroyed), while the Cathedral of the Okovetsky Icon hovers above. 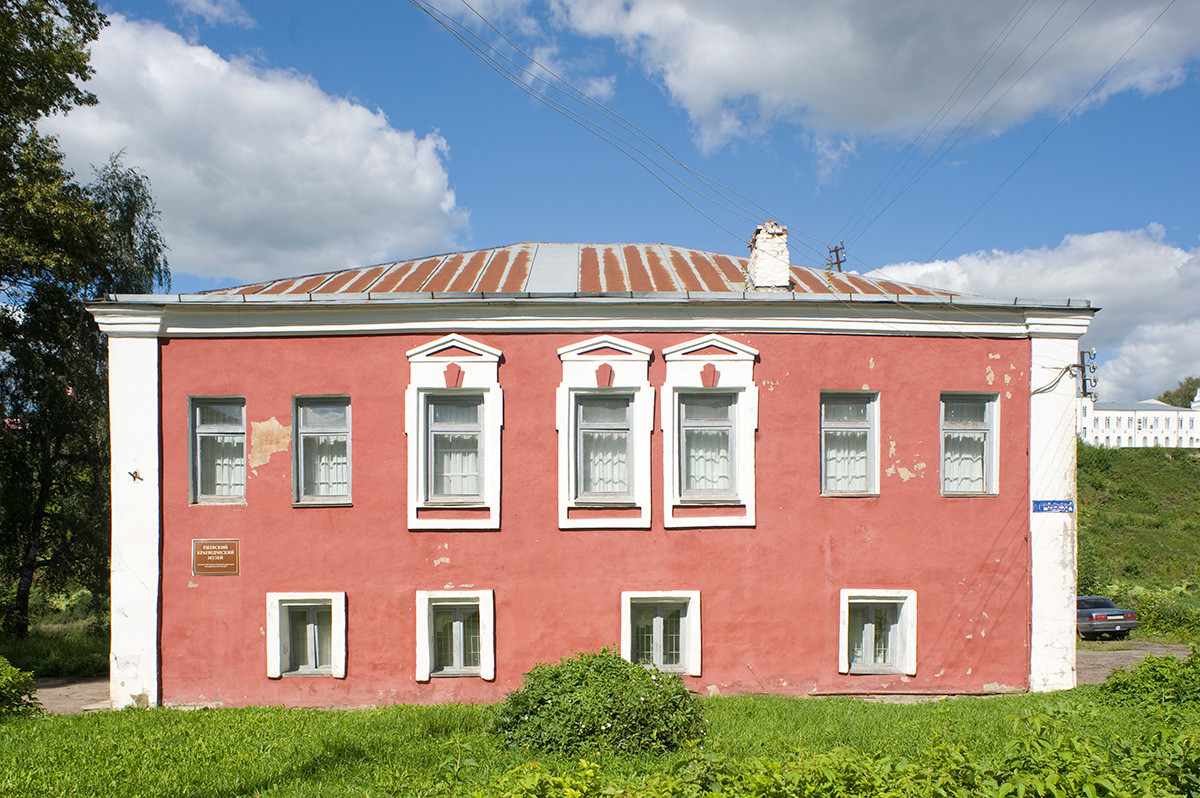 Traditional accounts state that the Okovetsky Icon of the Virgin and Christ child was discovered near Rzhev by a young monk in 1539. The miraculous icon, which gained renown for its miraculous healing properties, was attached to a tree in the vicinity of the Okovtsy village. Russian icon legends are often associated with trees, perhaps in symbolic reference to the wood of the True Cross. 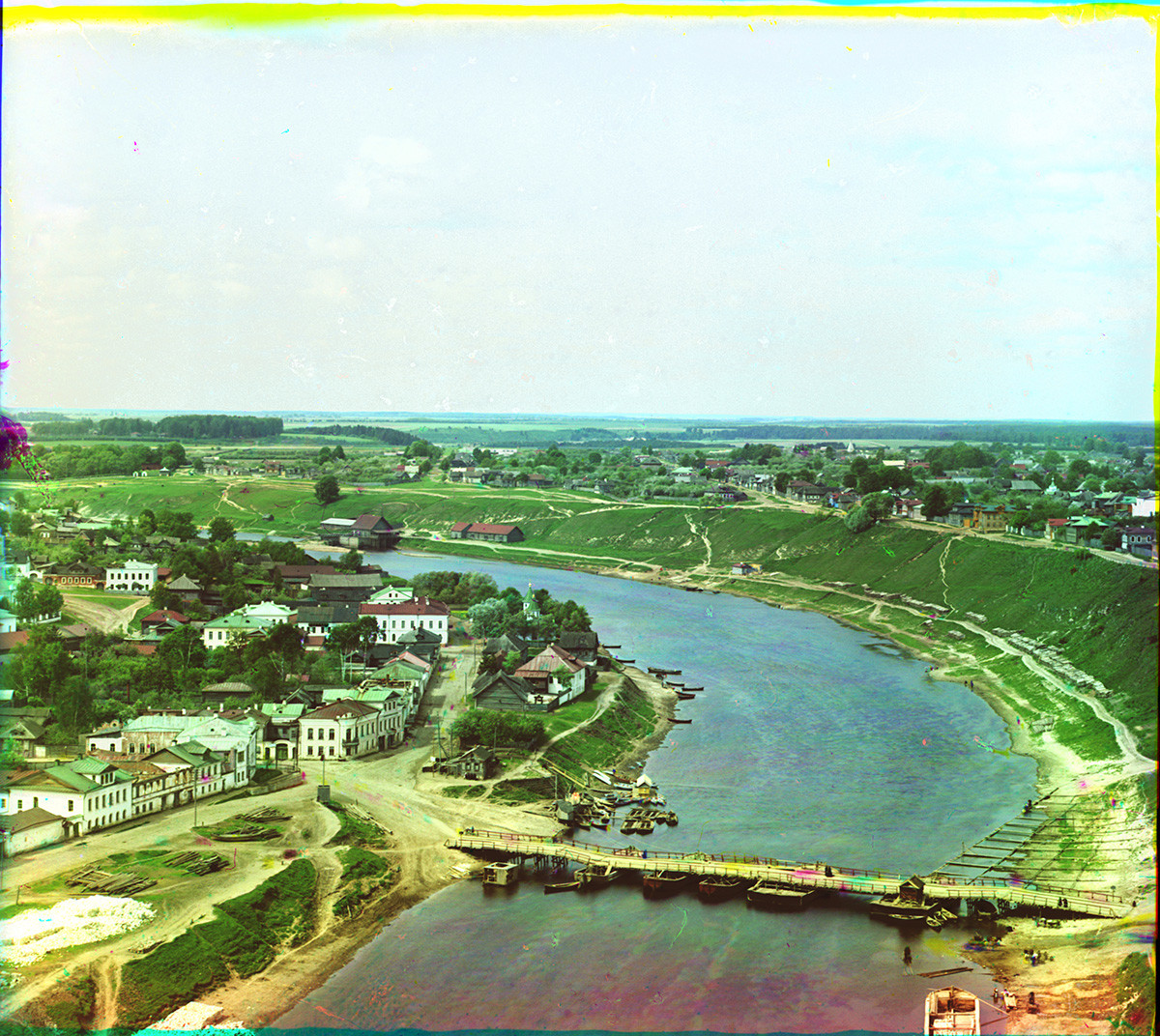 A wooden church dedicated to the Rzhev icon had existed near the Volga since the 1750s. In the early 19th century, church authorities hoped that masonry structures would replace wooden churches in towns, in part to lessen the fire hazard. Local parishioners petitioned to build a new brick church, and planning began in 1818. By 1831, the new church was consecrated to the Okovetsky Icon, with secondary altars dedicated to the Nativity of John the Baptist and St. Nilus Stolobensky, founder of the region’s largest monastery. 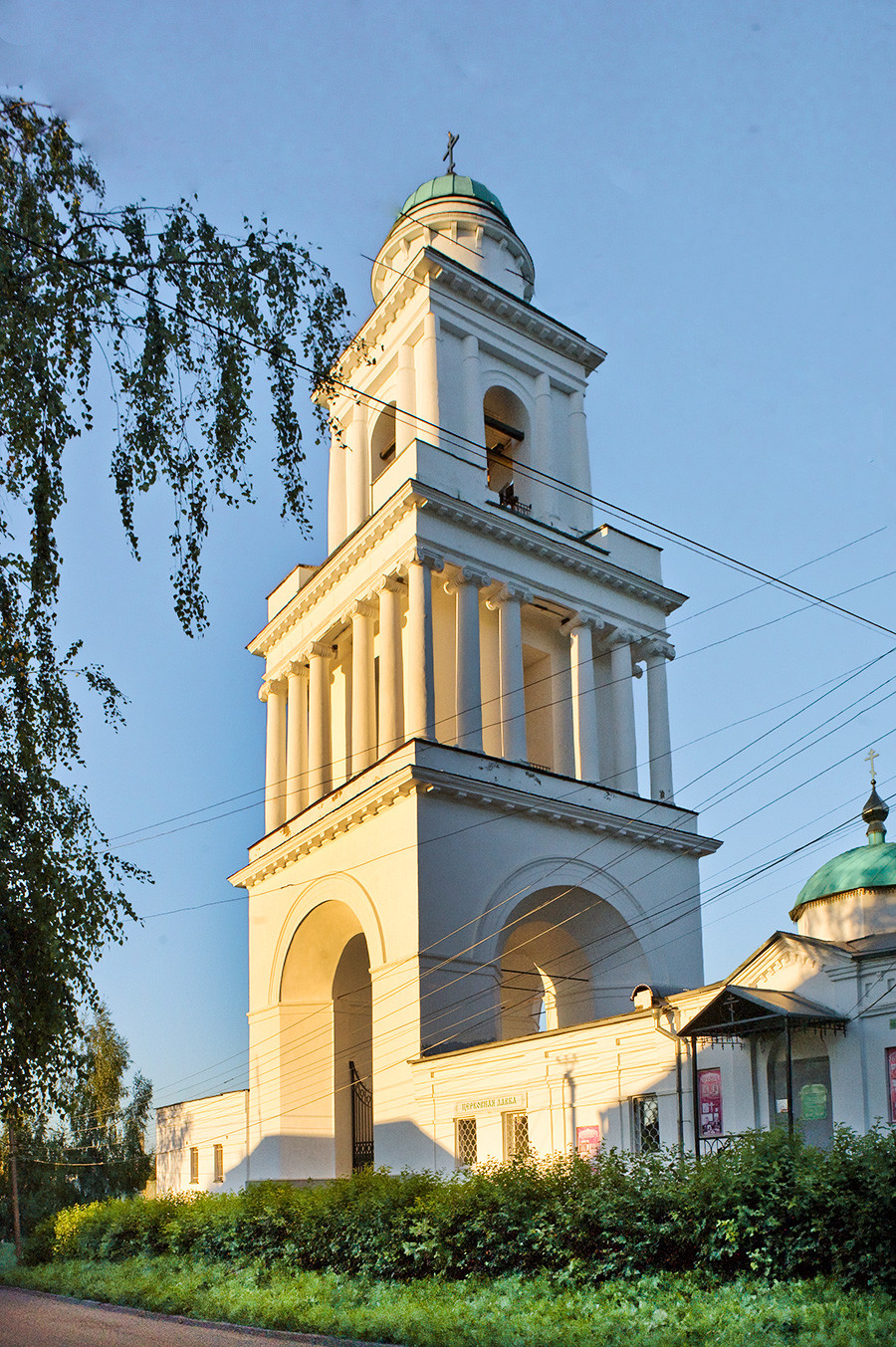 Although the identity of the architects is unknown, the church design conforms to a late Neoclassical style, with a large dome in the form of a rotunda and a monumental portico of eight columns on the west side. A massive free-standing bell tower was completed in a similar style in the early 1840s. 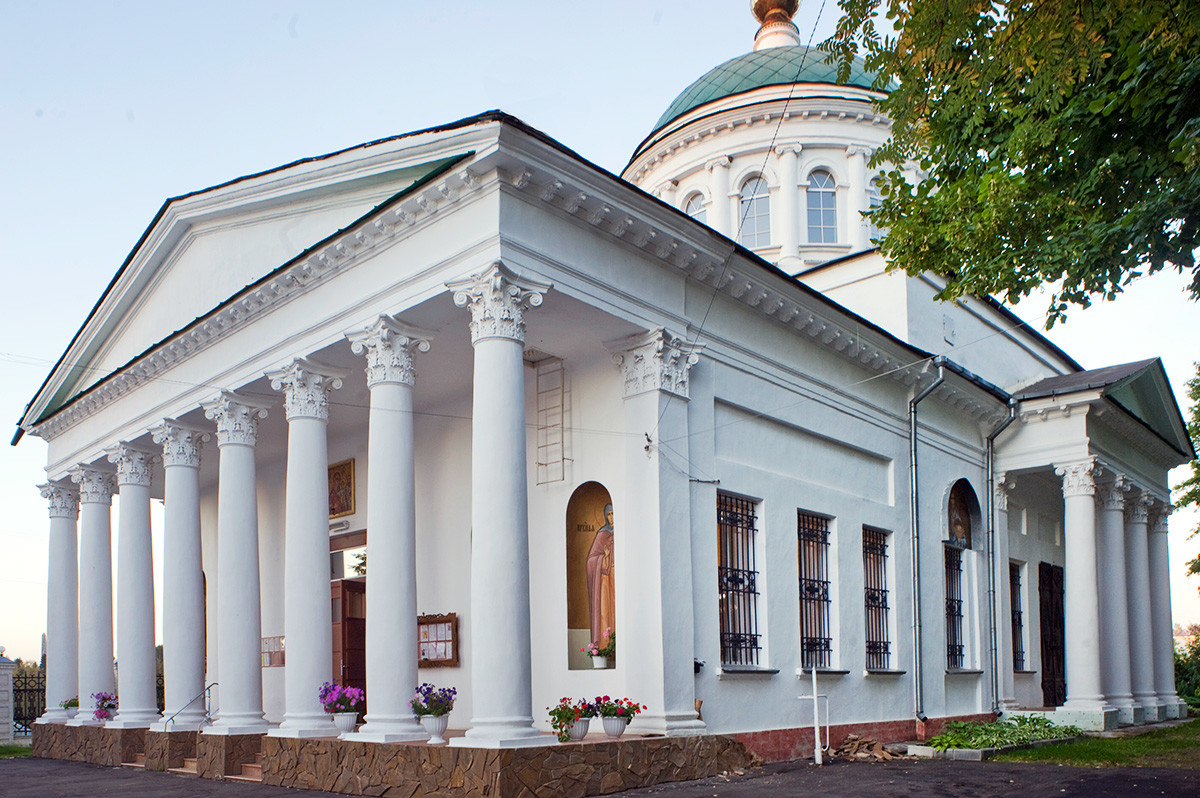 The church was closed during the early Soviet period, but it survived the war and was used as a warehouse and even a museum before being abandoned. In 1991, the structure was returned to the Orthodox Church and re-consecrated for worship, although several years were required for its restoration. It now has a new icon screen and serves as the primary cathedral of the Rzhev Diocese, established in 2011. 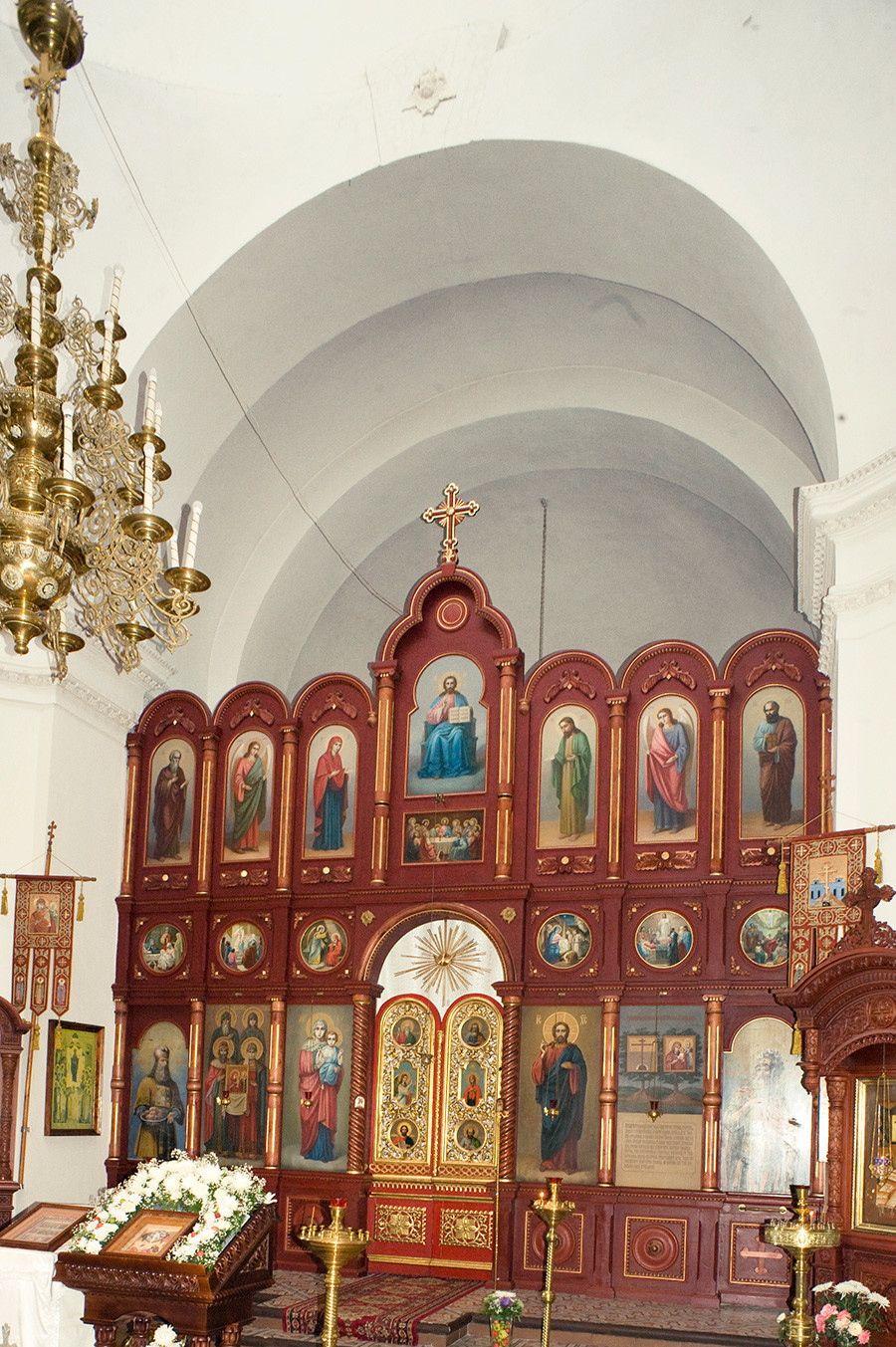 On the opposite side of the Volga, the Prince Fyodor Side is depicted in Prokudin-Gorsky’s beautifully composed view from the Dormition Cathedral bell tower, was left in ruins after 17 months of German occupation and fighting from October 1941 until March 1943. In the center is a south view of the neoclassical Cathedral of the Nativity of Christ, completed in 1847 and destroyed during the war.

During the First and Second Rzhev Offensive Operations in the summer and fall of 1942, some of the bucolic scenes photographed by Prokudin-Gorsky became arenas of bitter fighting that led to appalling losses, especially on the Soviet side. One common grave is said to contain the remains of 12,000 killed in summer battles just to retake the village of Polunin just three miles north of Rzhev. 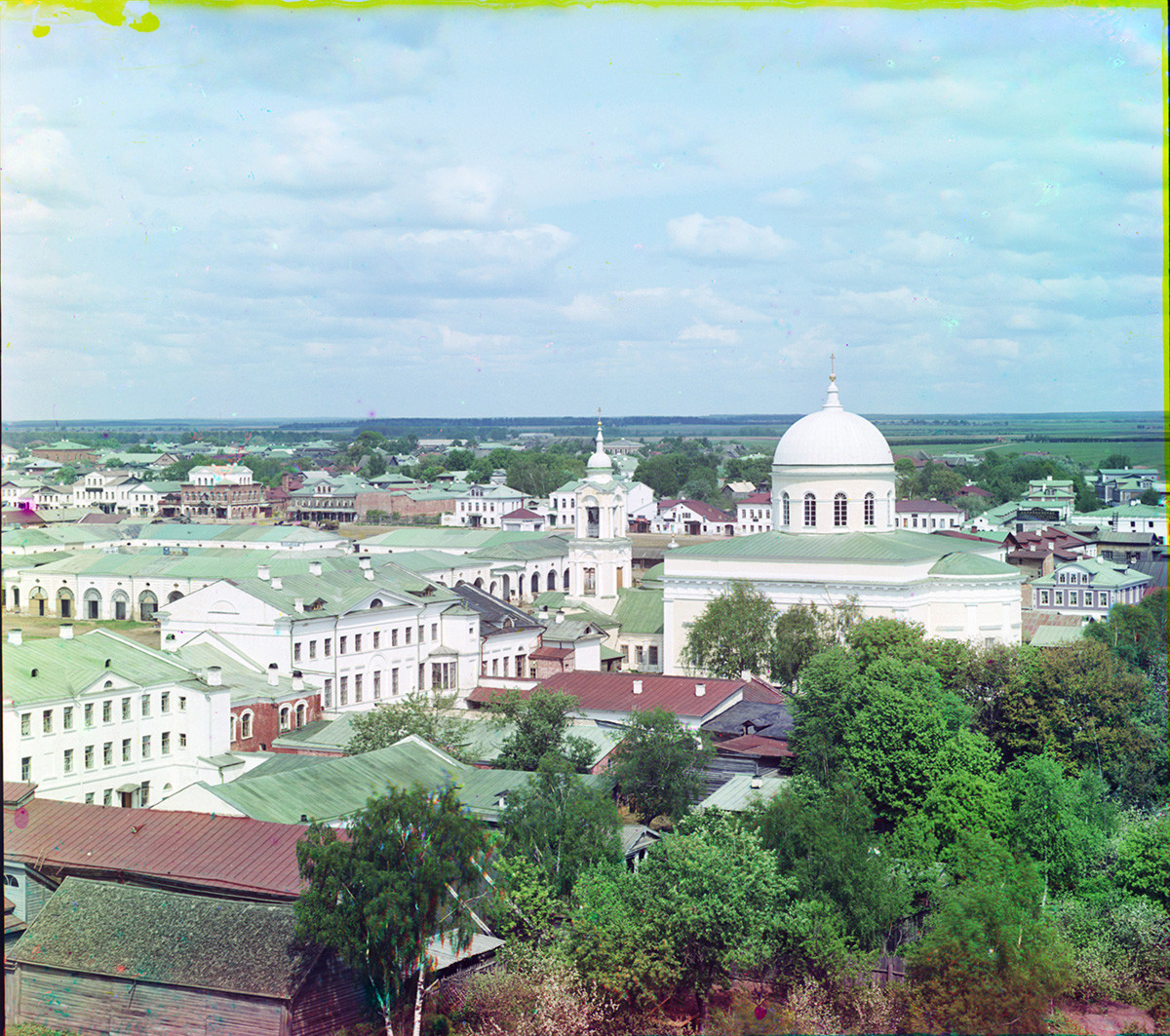 View of Prince Fyodor Side from bell tower of Dormition Cathedral. Center: Cathedral of Nativity of Christ. (All destroyed during war). Summer 1910.

After the war many, including Marshal Georgy Zhukov, argued that this enormous sacrifice was necessary to prevent further German divisions from joining the Stalingrad battle in late 1942. Following the defeat at Stalingrad, the German high command in early March 1943 ordered a withdrawal from the Rzhev salient in order to prepare another offensive. The German failure in the Battle of Kursk (July 5-August 23, 1943) led to a long, irreversible retreat that concluded in the ruins of Berlin.

The 17 months of fighting and occupation reduced the population of Rzhev to only a few hundred. Of some 5,500 dwellings before the war, only 300 remained. The rebuilding of central Rzhev included a large park with war memorials overlooking the left bank of the Volga. Prokudin-Gorsky’s photographs, so lovingly composed, are all the more valuable as a reminder of Rzhev before the devastation of total war. 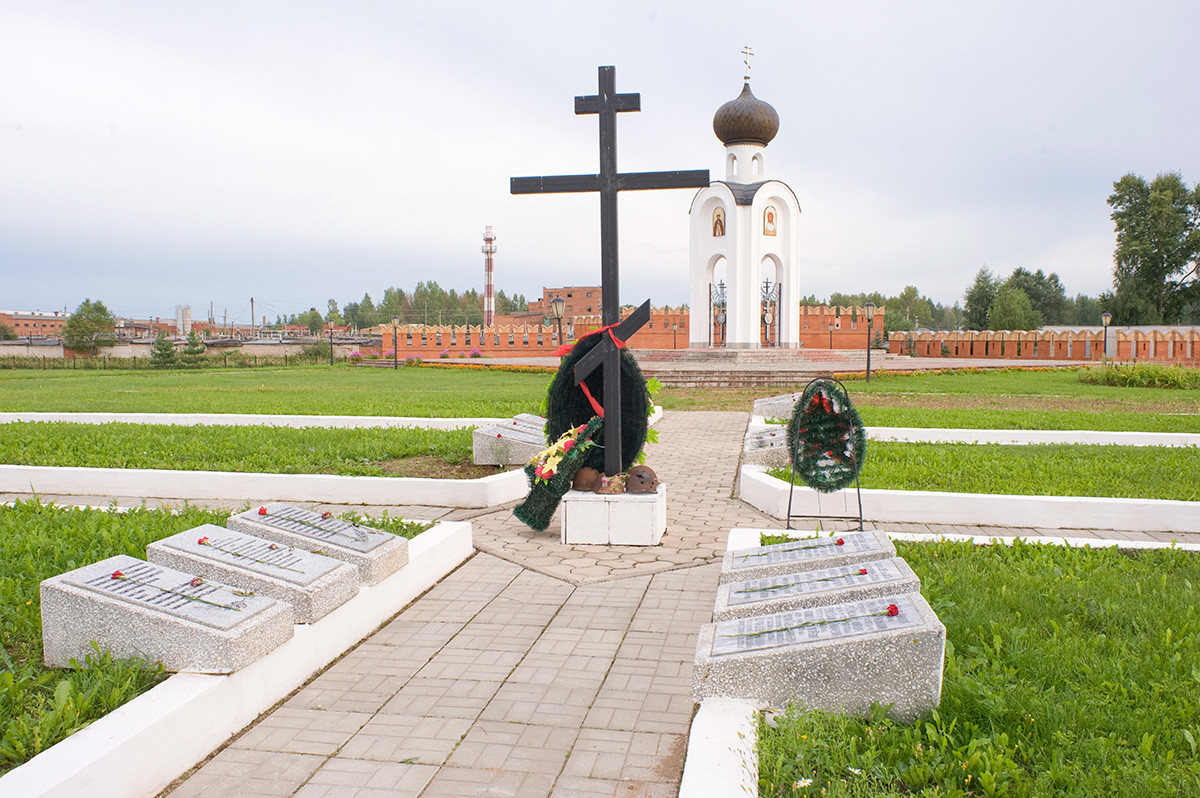