Kem: Enduring beauty on the shores of the White Sea 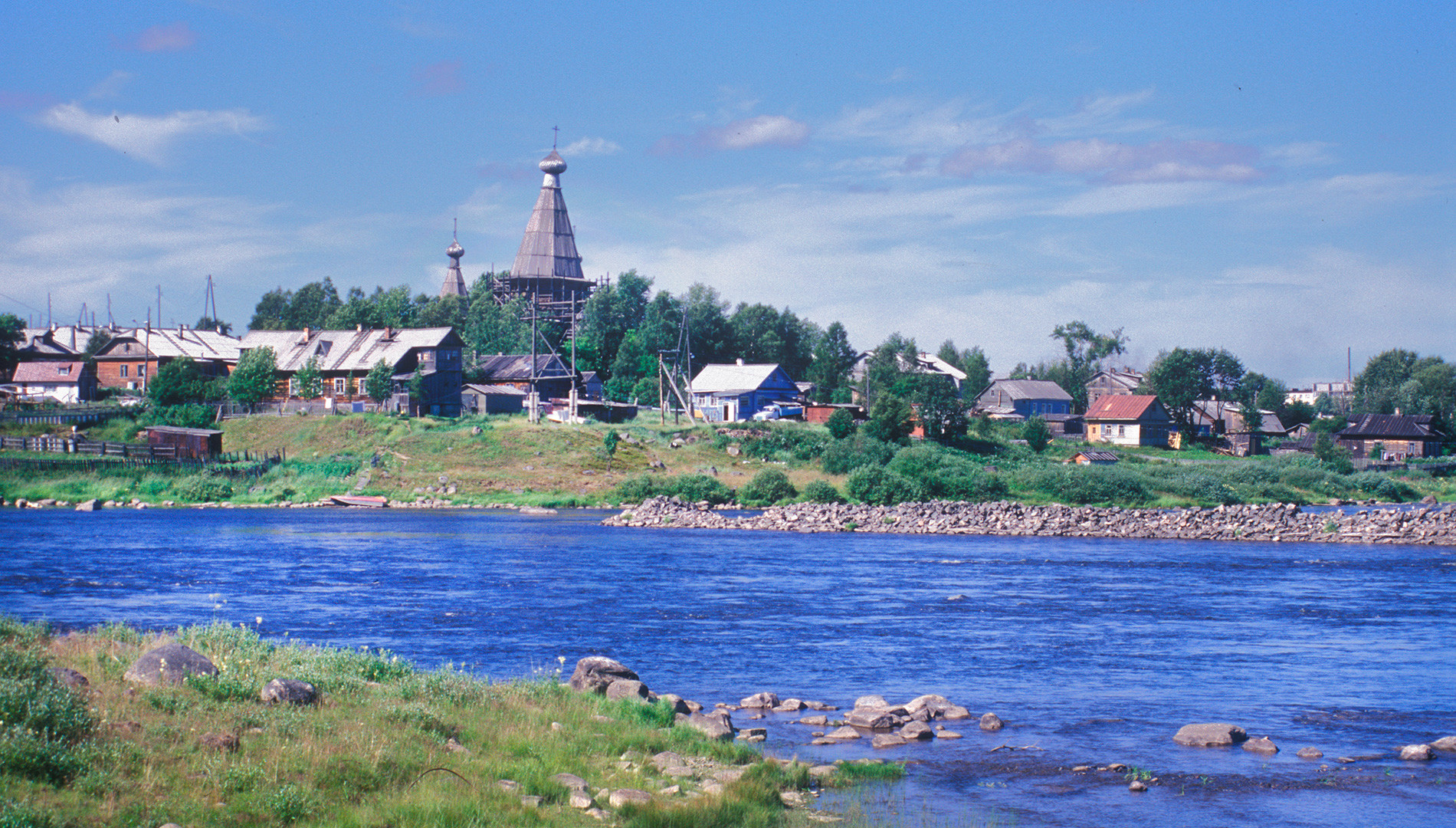 Kem, a regional center on the west shore of the White Sea in the Republic of Karelia, is best known as a major route to the Solovetsky Archipelago and its great Monastery of the Transfiguration. Yet the town has a dramatic history of its own, which, like that of the Solovetsky islands, combines lyrical beauty with elements of tragedy. 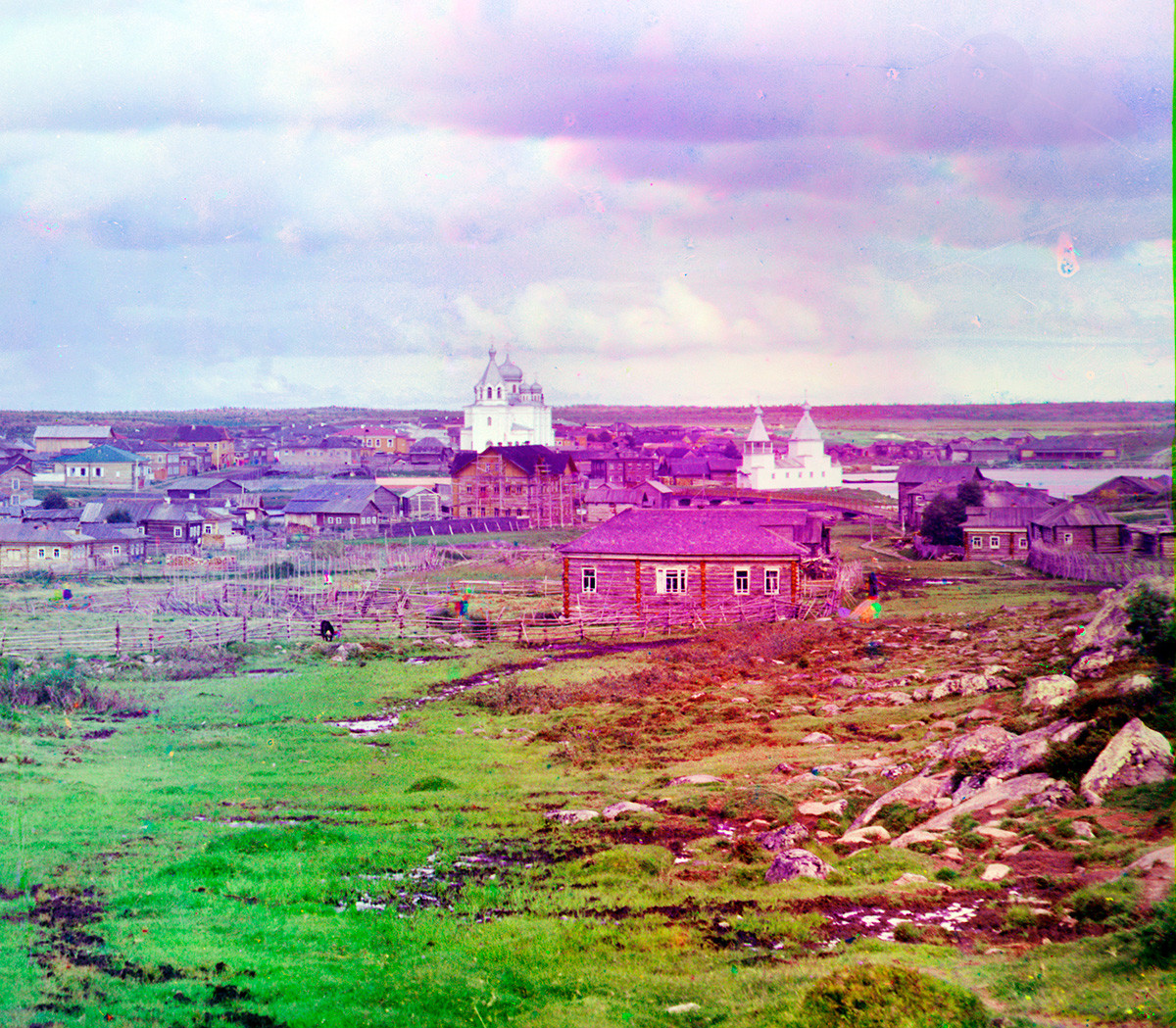 In the late summer of 1916, Russian chemist and photographer Sergei Prokudin-Gorsky visited Kem as part of his efforts to record the diversity of the Russian empire in the last years of the Romanovs’ reign. The Great War was raging in Europe, and Prokudin-Gorsky’s special passage during such difficult times was arranged by a state commission to photograph railroad construction to the new port of Murmansk, built to receive military supplies from the Western allies. Prokudin-Gorsky’s views were primarily panoramas taken from the railway cutting on high ground to the west of town.

A bulwark in the north 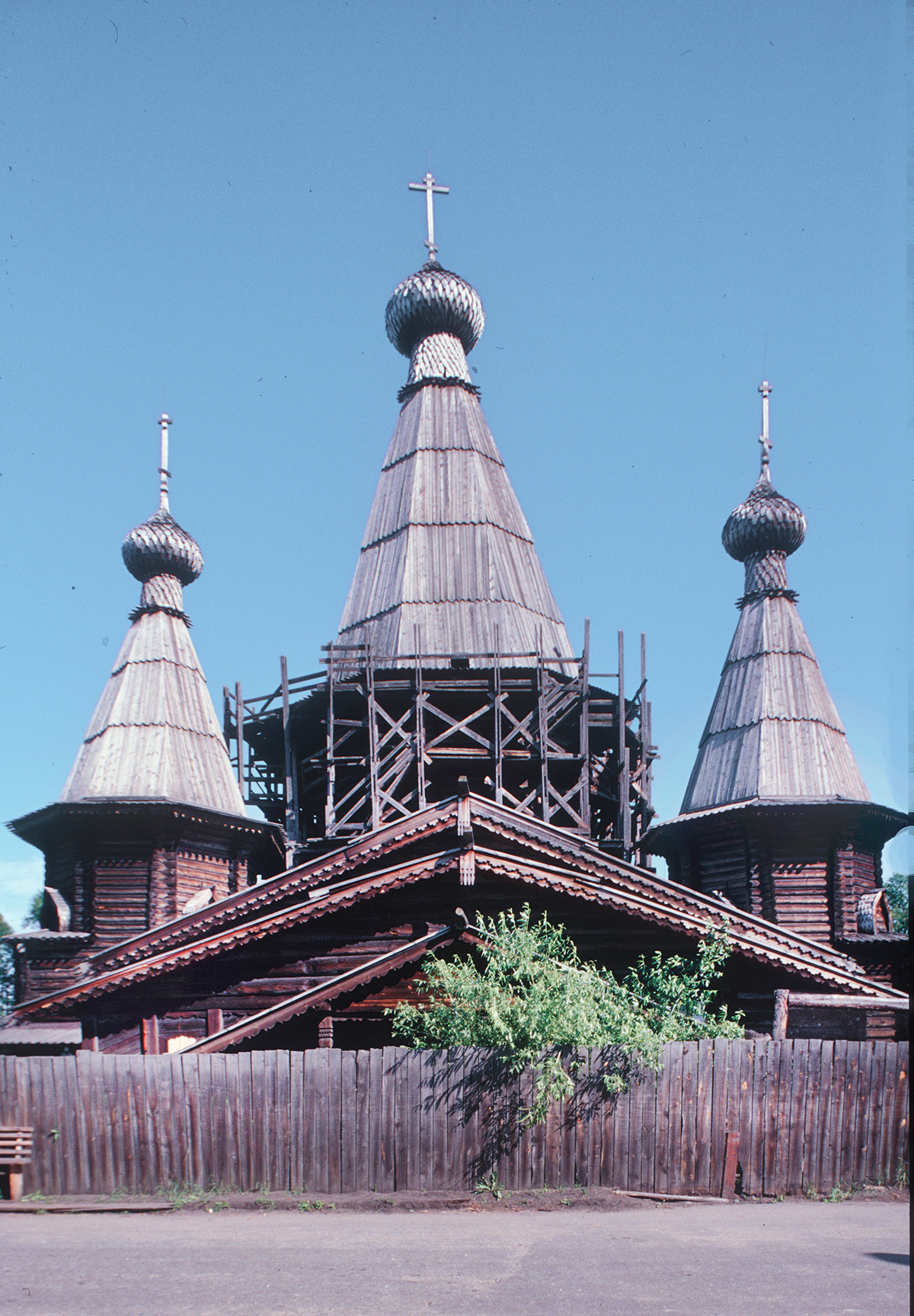 The very setting of Kem is dramatic, with a rocky coastline bounded by dense forest that reaches the west shore of the White Sea. The historic town is located primarily on an island known as Lepostrov (“Läppäsaari” in Karelian), which is flanked by the arms of the small Kem River near its confluence with the sea.

During the medieval period, these northern lands were tenuously held by the commercial power of Novgorod, whose authority was already tested to the limit by Moscow’s expansion. In 1450, Novgorod granted the settlement at the mouth of the Kem River to the Solovetsky Transfiguration Monastery, which had been formally established in 1436 on a group of islands in the southwestern White Sea. Through this grant, the Solovetsky Monastery, isolated by its archipelago, acquired a land base and port on the mainland some 35 miles to the west. 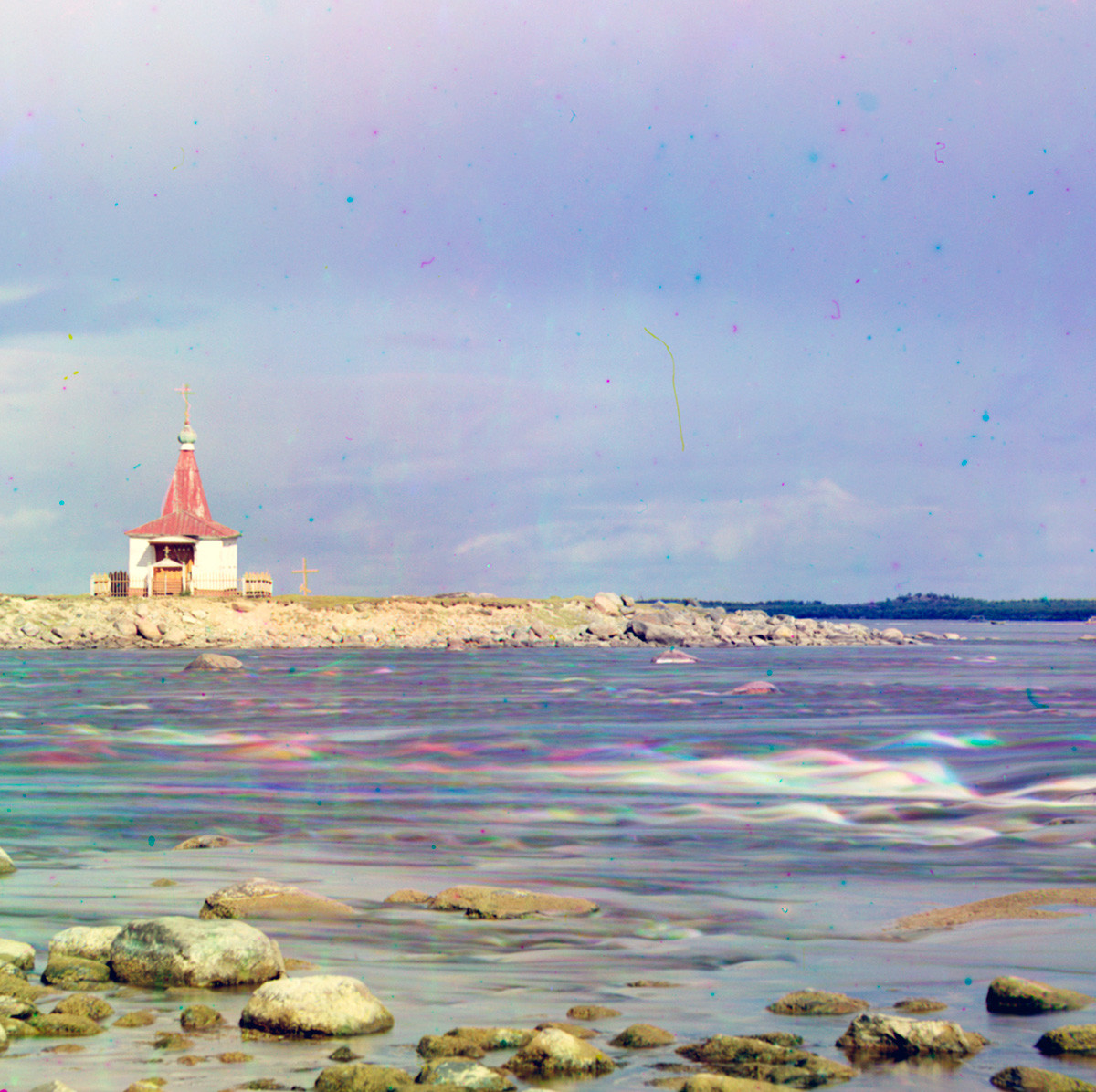 Because of its strategic location, Kem attracted the attention of hostile neighbors in the late 16th century, when Ivan the Terrible was mired in a protracted conflict known as the Livonian War (1558-83). The latter phase of the war involved a struggle with Sweden for control of the eastern Baltic region. In 1589 Kem was raided by Finnic forces, and in 1590 the region was attacked by the Swedes.
The following year, Moscow reaffirmed the Solovetsky Monastery’s title to the Kem territory. The power of the monastery allowed it to function as a surrogate for an exhausted Muscovy, and for the next century Kem was defended and fortified under the monastery’s direction.

Kem briefly returned to state control from 1704 to 1711 during the early phase of Peter the Great’s struggle with Sweden known as the Great Northern War (1700-21). With Peter’s victory over King Charles XII at Poltava in July 1709, pressure on Russia’s White Sea territory diminished. 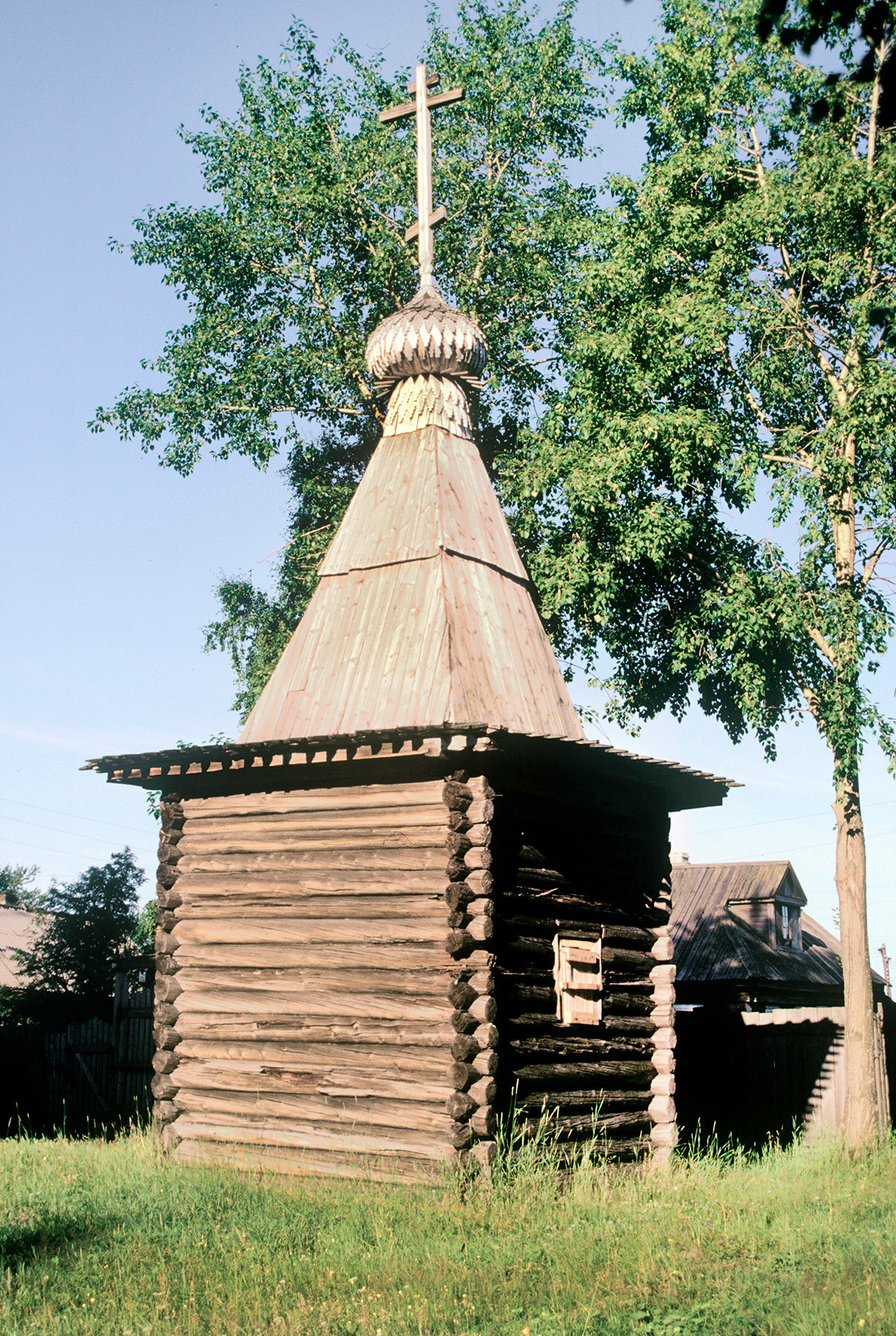 To symbolize Russian power in the area, the wooden Cathedral of the Dormition was erected in Kem in 1711-14. That this remarkable log structure should be designated a cathedral is indicative of the rich forest culture of northern Russia. Its three tent towers, which signify the presence of three altars, soar above its elevated location on Lepostrov. 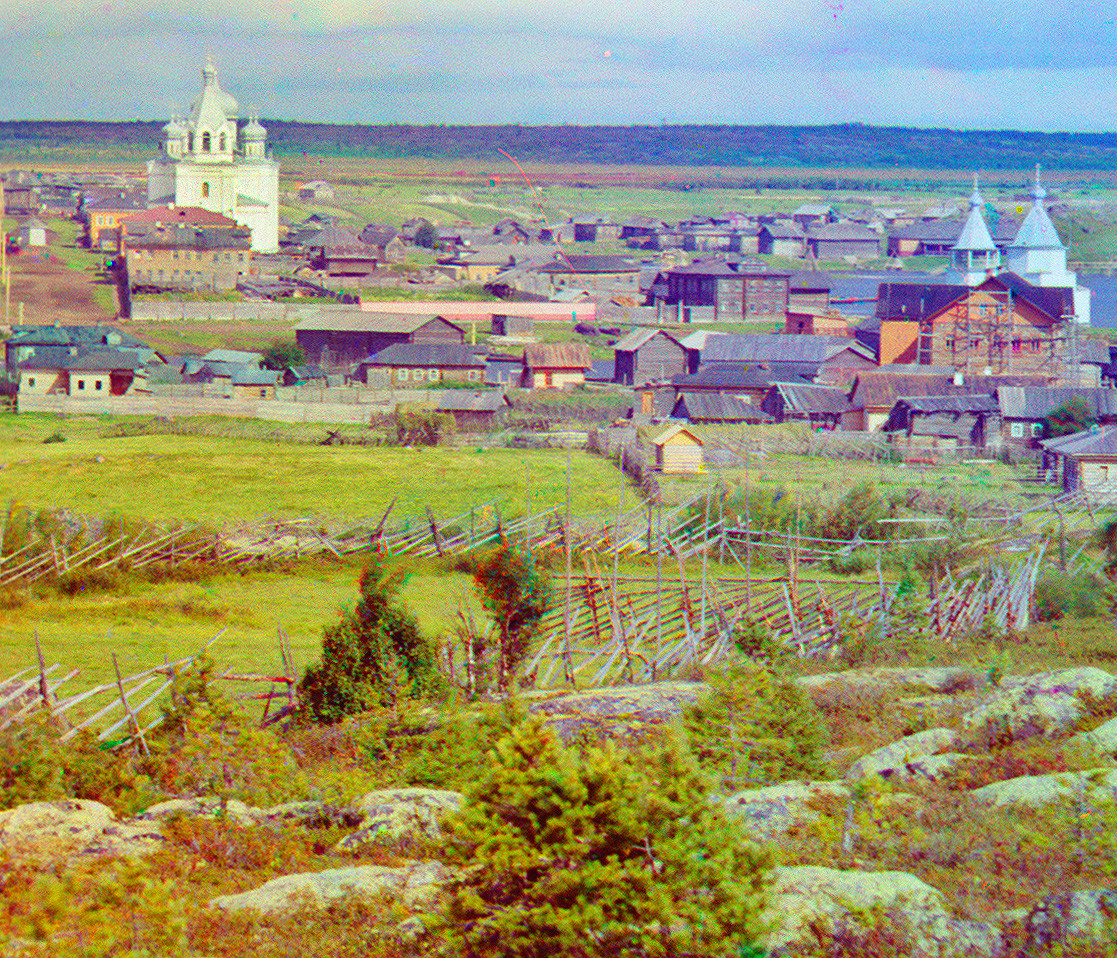 Unfortunately, we have no record that Prokudin-Gorsky photographed the cathedral, which stood beyond the right edge of one of his panoramas. Nonetheless, such an original monument deserves its place in a description of Kem.

The main (west) facade of the Dormition Cathedral is decorated with a porch leading to a wide, one-story structure with three roofs in ascending levels. The roofs provide a pedestal for the central tower, which rises from a square base to an octagon that supports an eight-sided "tent" tower. Some 118 feet high, the tower is crowned with a wooden cupola and cross. The core structure is flanked by two smaller towers over attached chapels that are dedicated to St. Nicholas (on the south) and to Sts. Zosima and Savvaty, founders of the Solovetsky Monastery. 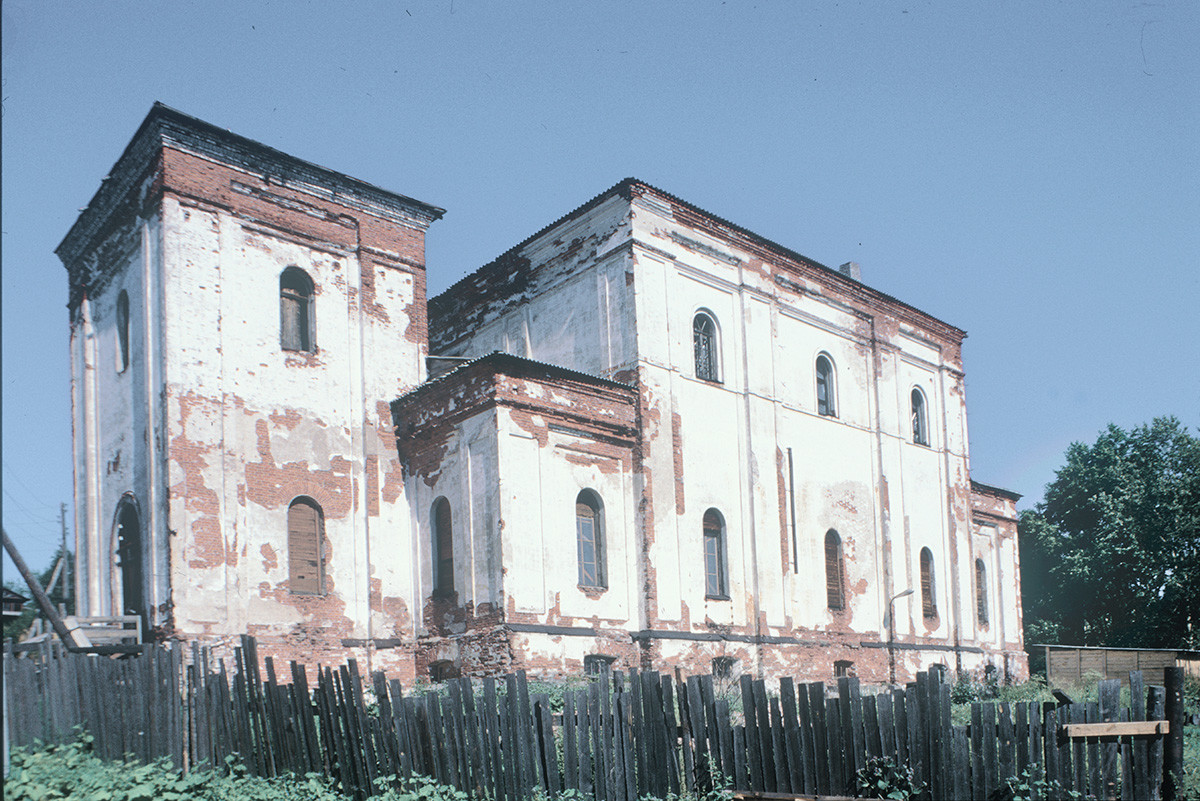 Closed around 1930, the Dormition Cathedral underwent a partial restoration as early as the 1950s. Restoration efforts resumed at the turn of this century, and in 2012 the shrine was granted to the Solovetsky Monastery. A fundamental restoration, launched in 2016, involved the dismantling of the entire structure, carefully reproducing damaged elements and reassembling the components on the original site. This prolonged and complex work is now reaching its conclusion.

The territory of the Dormition Cathedral also has a separate chapel built around 1710 and dedicated to the Trinity. The interior contains a large wooden votive cross associated with Peter the Great. The shape of the chapel bears a resemblance to the small wooden Church of the Nativity of John the Baptist visible in one of Prokudin-Gorsky’s views of the harbor. Originally dated to 1682, the church was destroyed in the 1930s. 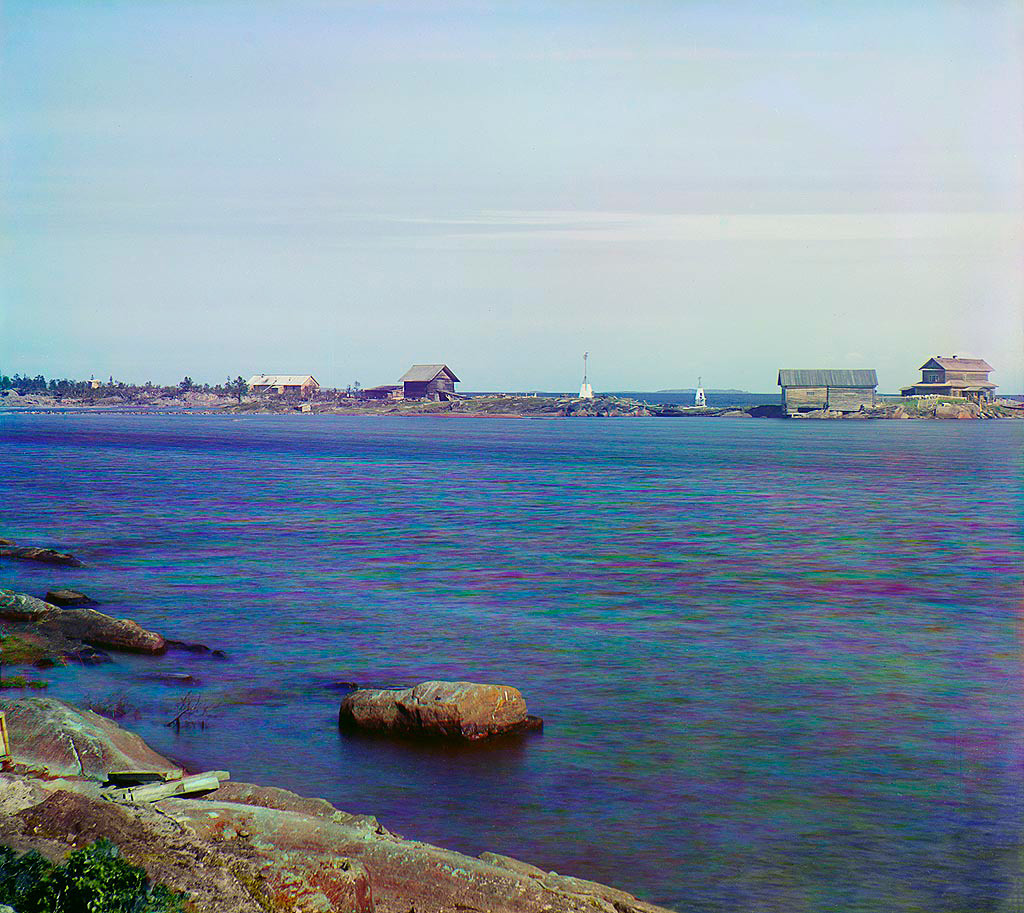 Kem remained under the control of Solovetsky Monastery until 1764, when Catherine the Great initiated reforms that curtailed monastic holdings. At that point, Kem became a part of various administrative divisions in the White Sea area. During the 19th century the town survived primarily thanks to the fishing industry; the rocky soil could support only subsistence farming for its 2,000 or so inhabitants. 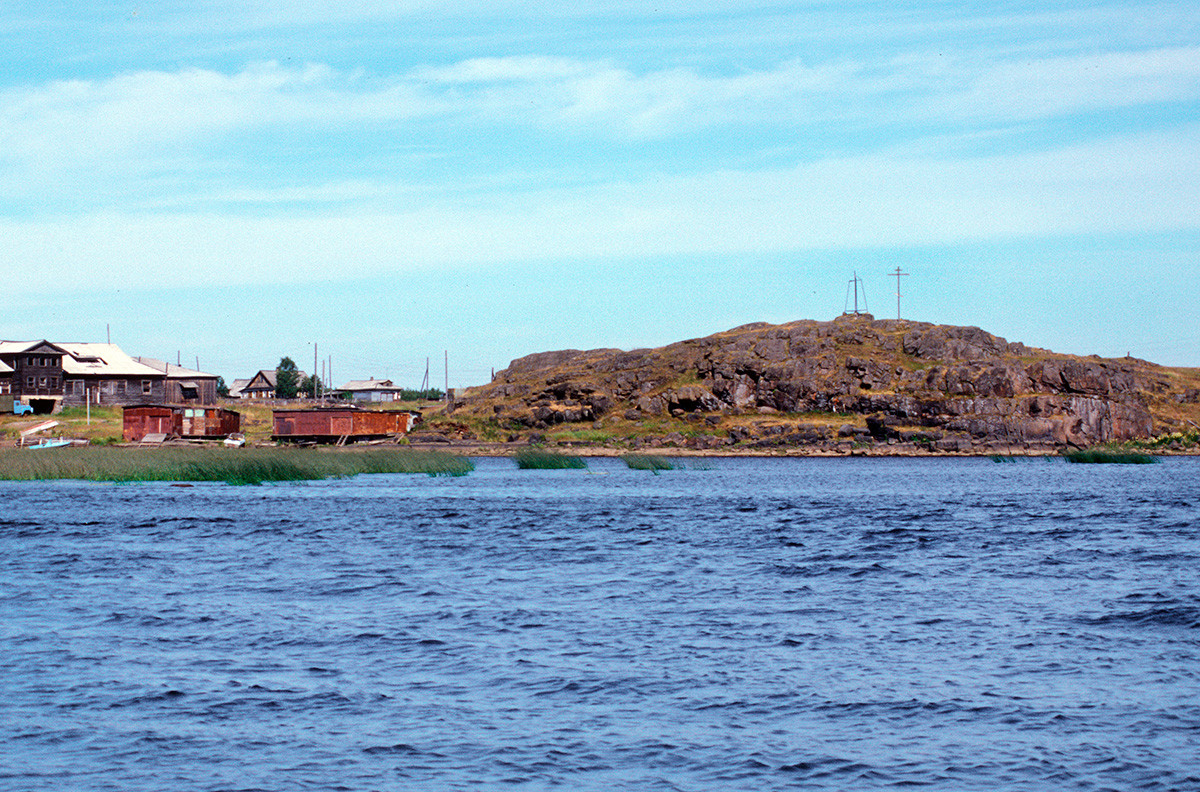 Difficulties of the recent past

At the beginning of the 20th century, Kem gained a masonry cathedral dedicated to the Annunciation, which is visible in two of Prokudin-Gorsky’s panoramas. Begun in 1882 with the support of a local merchant, the cathedral was long in construction due to limited resources and was not consecrated until 1905. 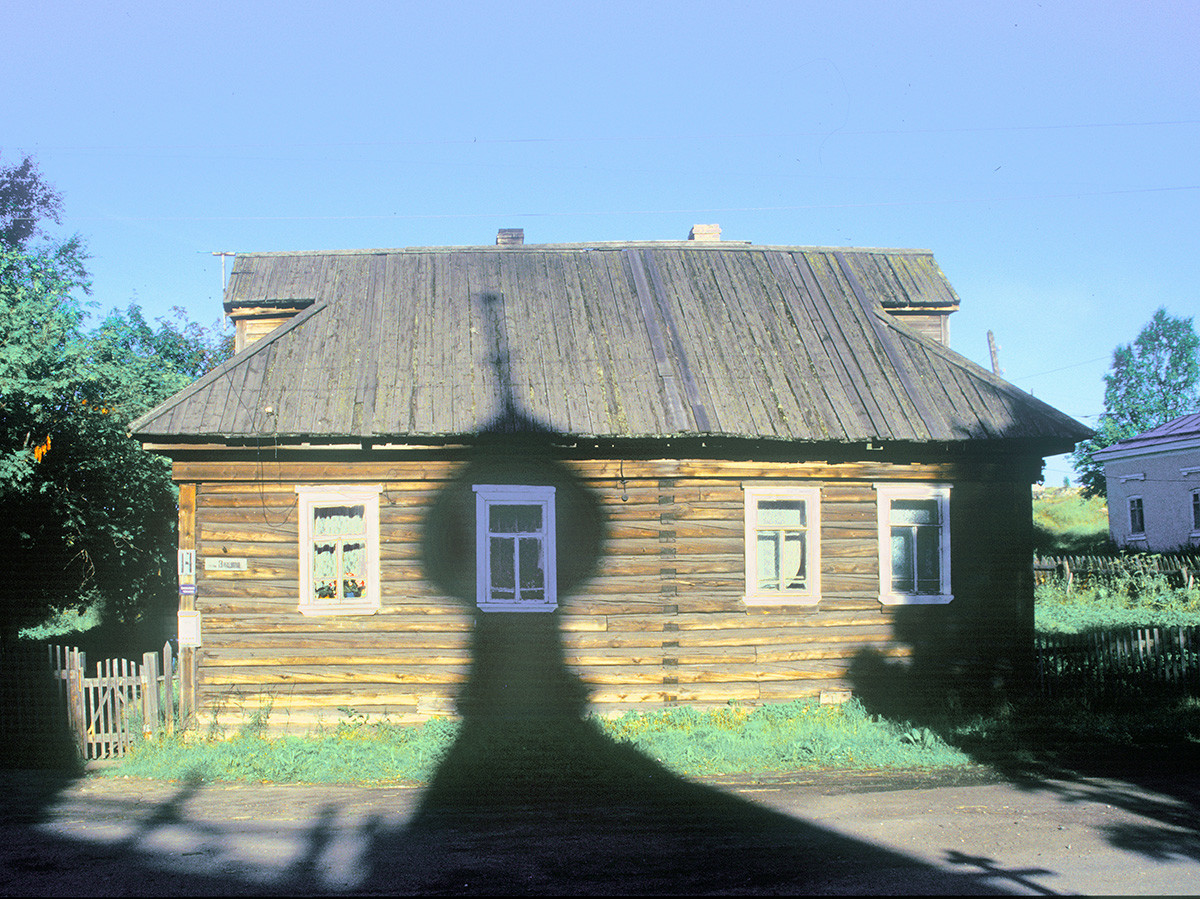 Following the cathedral’s closure in 1936, its five cupolas were demolished and the structure was temporarily used to house prisoners destined for the concentration camp on Solovetsky Island. My photographs from 2001 show the severe disfiguration inflicted during the Soviet era. The cathedral is now being restored as part of the Monastery of New Russian Martyrs and Confessors, established in 2000.

Kem grew during World War I with the construction in 1915-17 of the railroad to Murmansk. Following the Bolshevik revolution, Kem was occupied in 1918 and 1919 by White troops and briefly by an Anglo-American force. 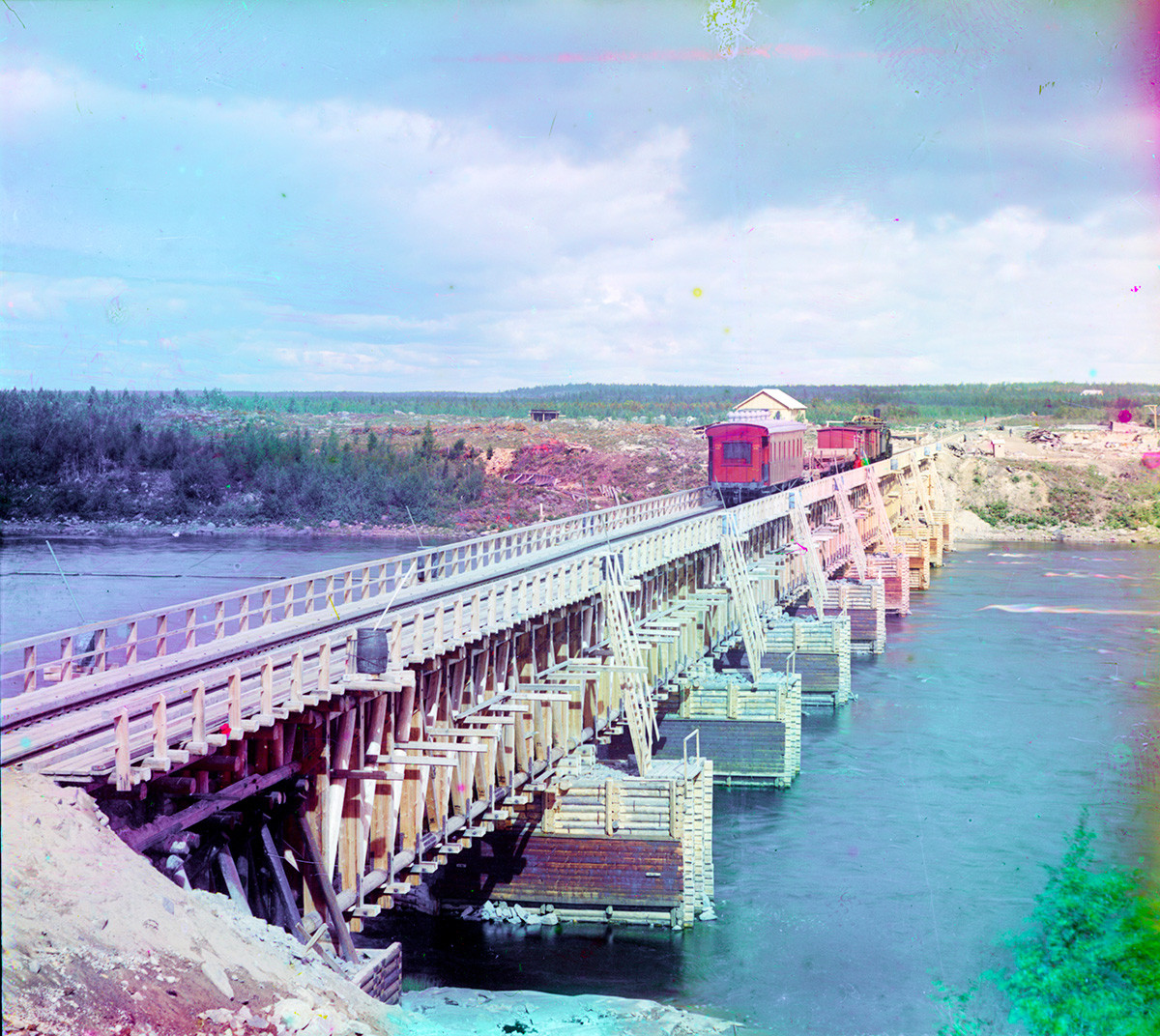 Railroad bridge seen from right bank of Kem River in the direction of Murmansk. Summer 1916

With the advent of Soviet power, Kem rapidly became a part of the system of supply and administration for a penal camp established by the Cheka (the Soviet political police) in 1919 on the territory of the former Solovetsky Monastery. In 1921 this prison was named the Solovetsky Camp of Special Designation (abbreviation: SLON), described by Alexander Solzhenitsyn in his Archipelago GULag.

The camp was closed in 1939, by the GULag system had expanded on a vast scale. A wooden votive cross now stands on a rocky elevation near the Kem harbor to commemorate the fate of those who died in the Solovetsky camp only a decade or two after Prokudin-Gorsky’s visit. 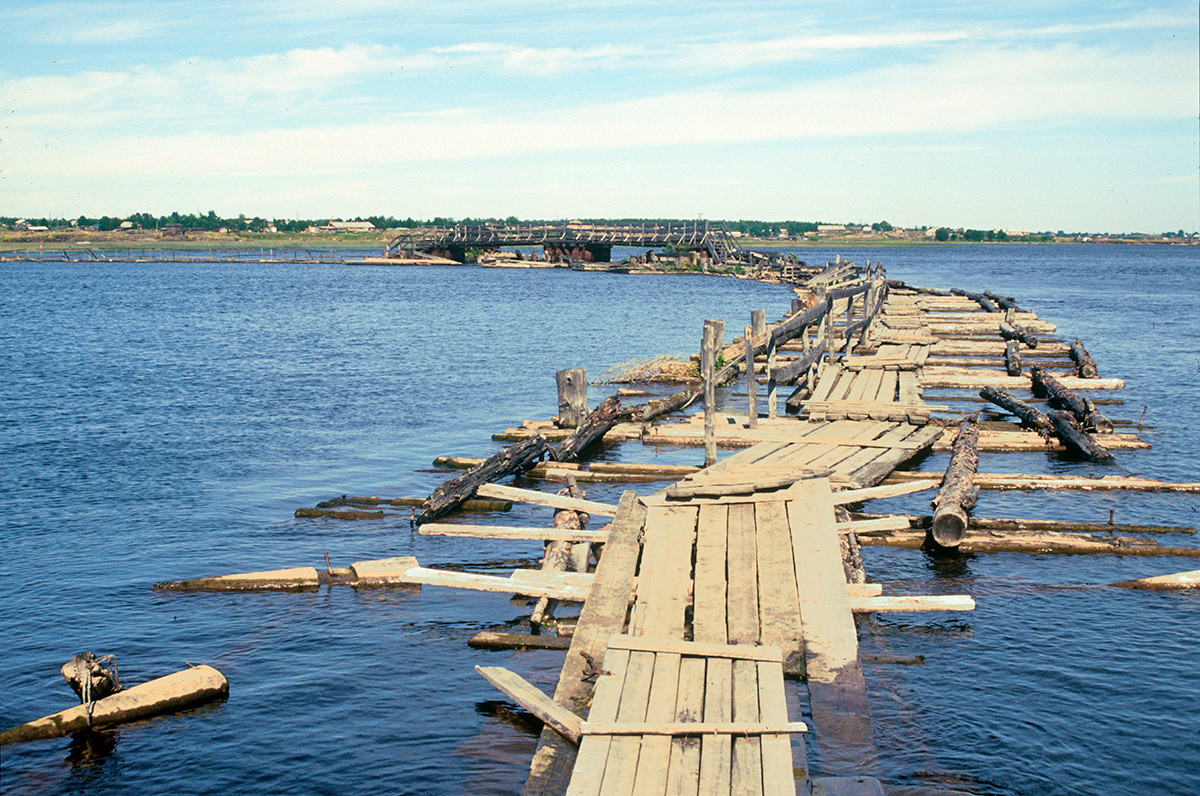 During World War II, the same rail line that Prokudin-Gorsky photographed became a critical transportation link for allied Lend-Lease deliveries through the port of Murmansk. Although much of southwestern Karelia was occupied by Finnish forces allied with Germany until the summer of 1944, the railway continued to function via a link around the south shore of the White Sea to the Arkhangelsk-Vologda railroad.

Easily accessible by rail from Petrozavodsk, Kem now has a population of approximately 11,000. Sustained in part as a transportation hub for the stream of summer visitors to Solovetsky Monastery, Kem has distinctive monuments of its own, as well as an impressive perch overlooking the boulder-strewn shore of the White Sea. 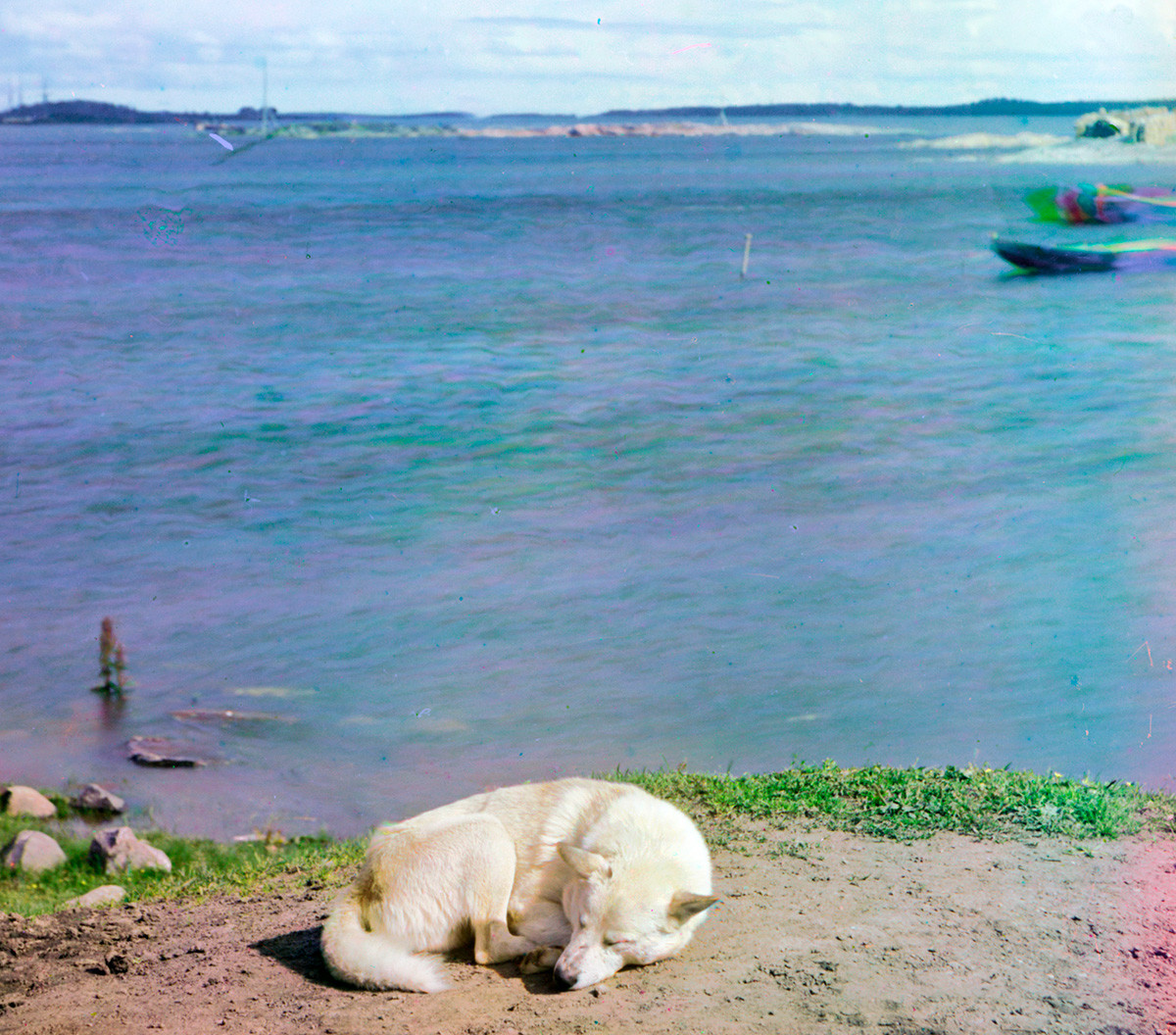 "Etude". Laika dog, especially valued in North for its endurance & hunting abilities. On shore of the mouth of Kem River. Summer 1916