Travel
William Brumfield
American historian and photographer William Brumfield keeps discovering remote sides of Russia for you. This time he visits the magnificent, sacred Russian North and compares early 20th centuries photos by Prokudin-Gorsky with his own photos taken a century later. 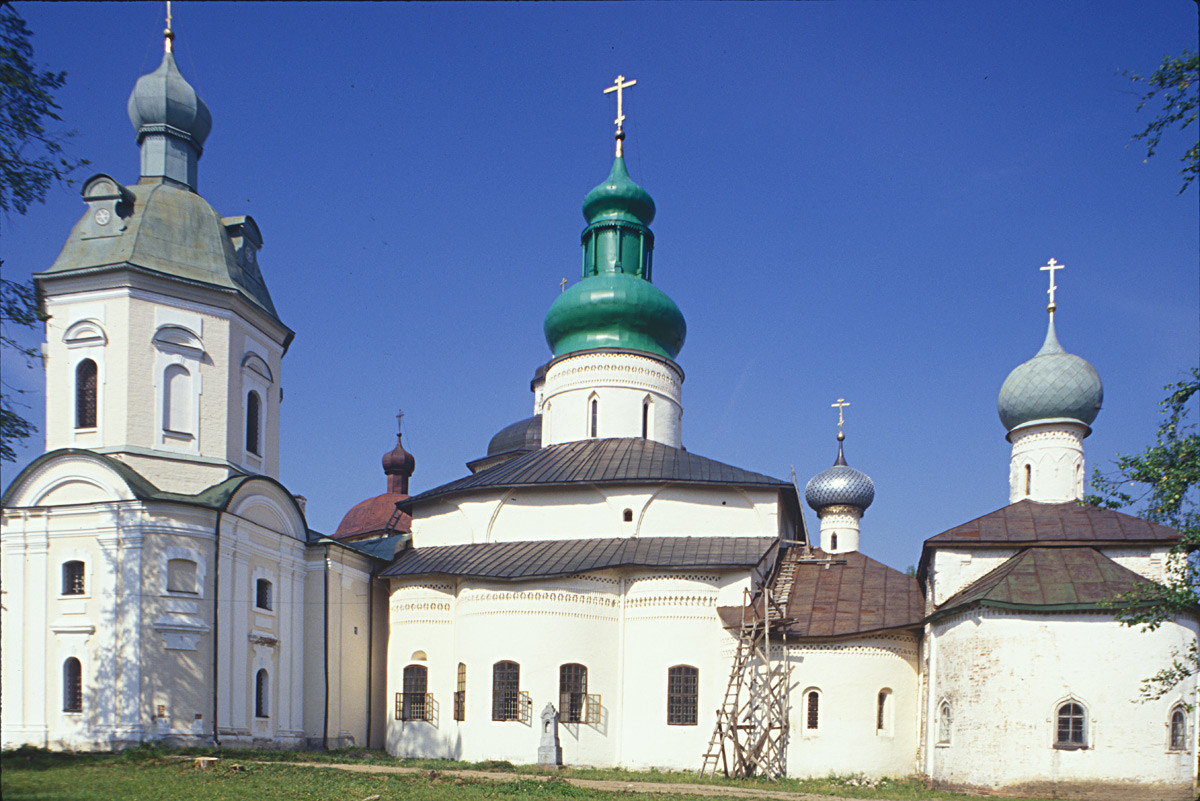 Every summer, thousands of tourists visit the St. Kirill Belozersk Monastery on popular river cruises. With its massive walls, brick towers and array of churches, the monastery, situated on the shore of Siverskoe Lake, is one of the most impressive sights in the Russian North. It also made an impression on Russian photographer and chemist Sergei Prokudin-Gorsky, who traveled there in summer 1909 with support of the Ministry of Transportation. 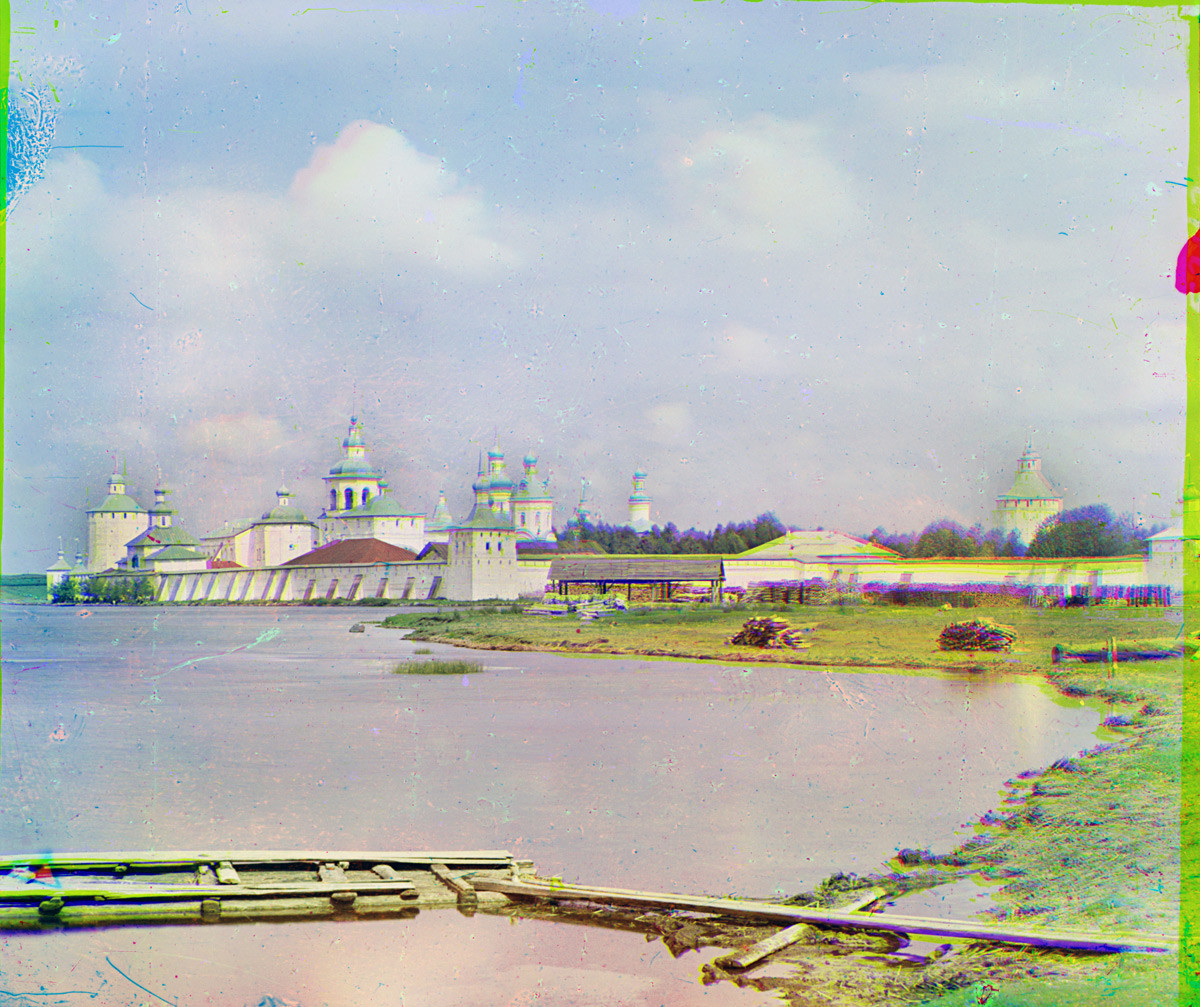 Among his work there, Prokudin-Gorsky photographed a fresco cycle with a stunning apocalyptic vision. He photographed it from the south shore of the lake. My photographs from the lake in the late 1990s show little change in the monastery’s appearance.

An important side for medieval Muscovy

But first, why did such a large monastery exist in the remote Russian North? With the 14th-century revival of monasticism in Moscow under the direction of St. Sergius of Radonezh, pioneer monks sought remote northern areas as a test of their ascetic faith and dedication. At the same time, Muscovite princes supported their efforts, which not only spread the Orthodox faith but also consolidated Moscow's territorial expansion into the rich forests of the far north. 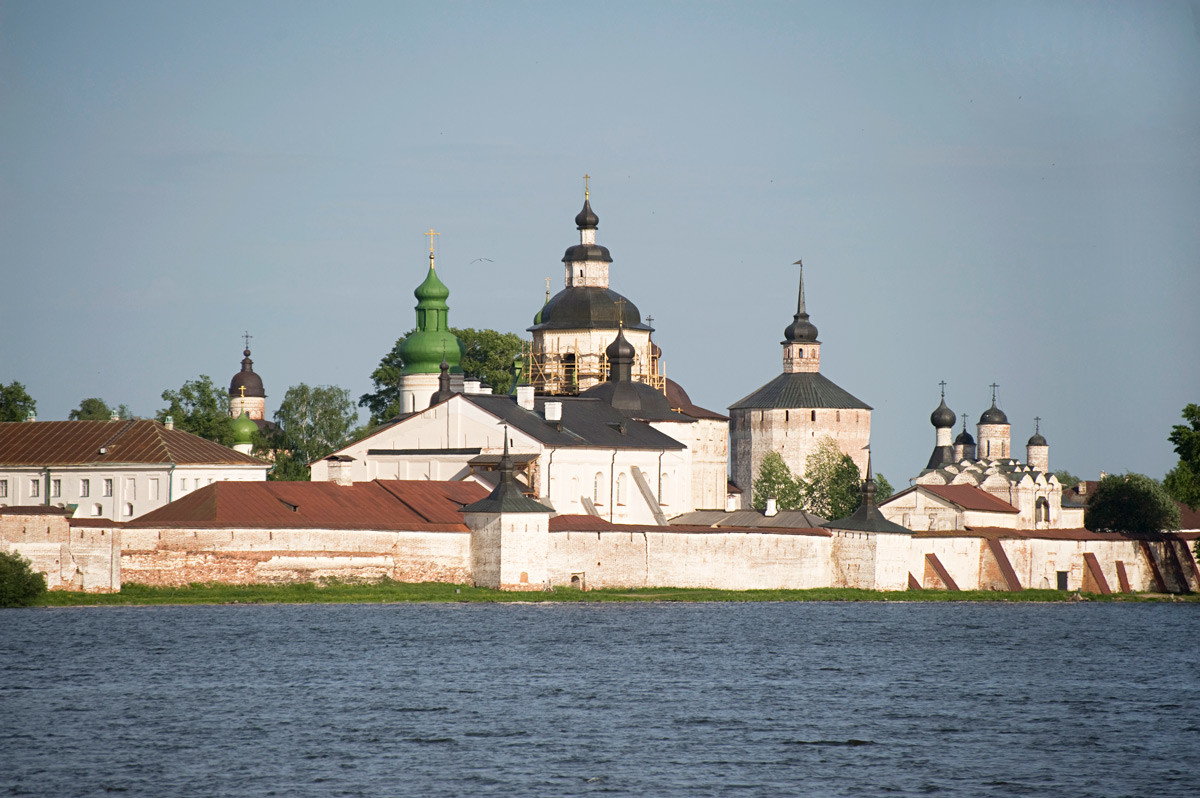 The origins of the monastery date to 1397, when the monk Kirill (Cyril) of Belozersk (1337-1427) arrived at Sivers Lake and dug a cave dwelling for himself. Kirill had taken monastic vows in Moscow’s powerful Simonov Monastery and became of disciple of St. Sergius, who supported his determination. Inspired by a vision of the Virgin Mary, he made his way to the region of Beloe Ozero (White Lake) and from there to Sivers Lake.

In the turbulent early 15th century, the St. Kirill Dormition Monastery played a significant role in maintaining Moscow’s dynastic stability. Consequently, the monastery received donations that by the 16th century made it one of the largest in Muscovy, second in size to the Trinity-St. Sergius Monastery near Moscow.

Transformation over the centuries

During the first century of its existence, the Dormition Monastery was built entirely of logs, but in summer 1496, a master builder from Rostov known as Prokhor, along with 20 masons, rebuilt in brick the main monastery church, dedicated to the Dormition. 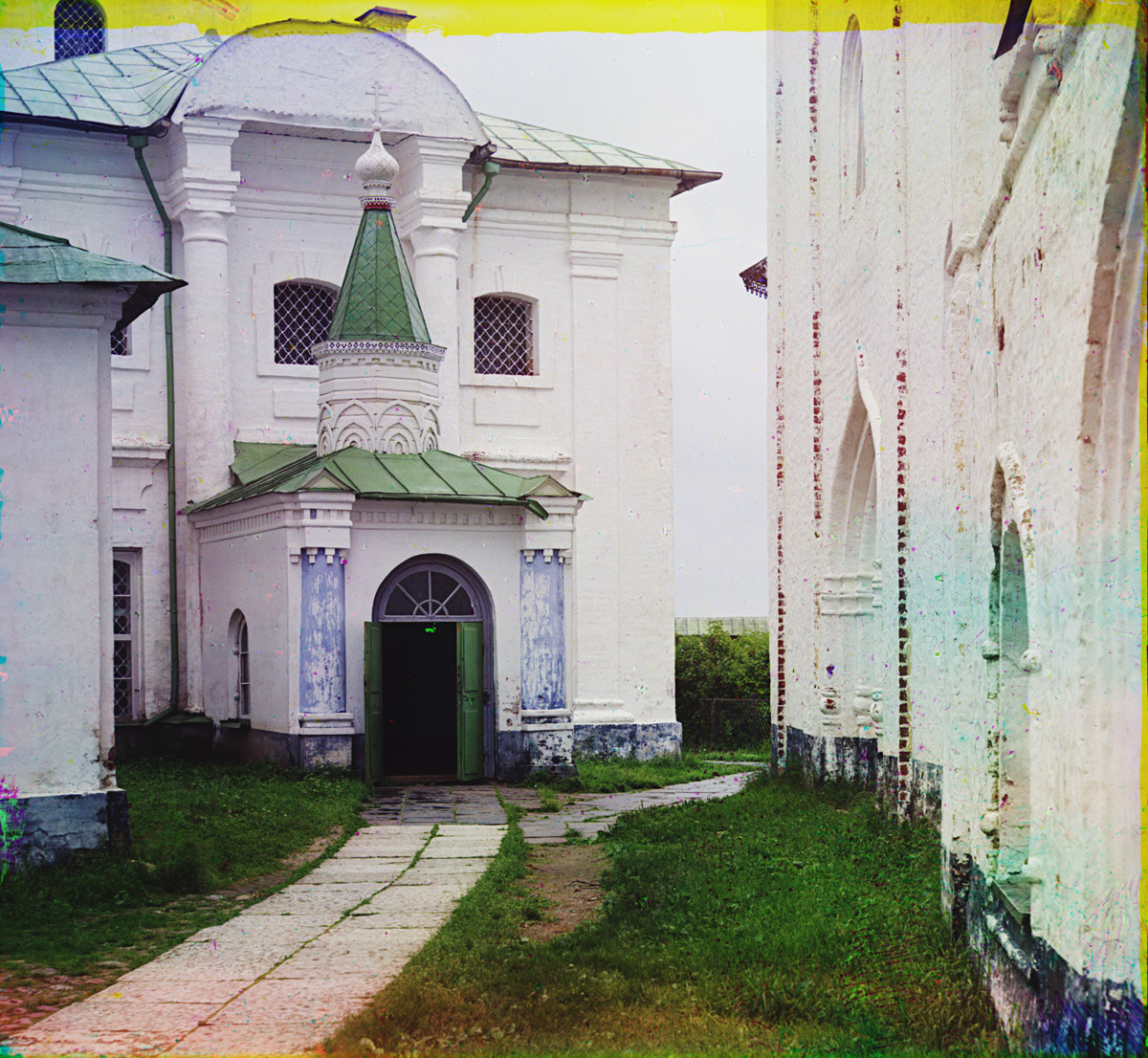 In the 16th through the 18th centuries the Dormition Cathedral underwent several modifications. These modifications included the construction of three small churches attached at the corners of the cathedral’s east wall, which enclosed the main altar. From the northeast corner, the additions are: the diminutive Church of St. Vladimir (1554), which served as a burial chamber for the Vorotynsky princely family; the Church of St. Epiphanius of Cyprus, added in 1645 to the north facade of the Vladimir Church and used as a burial chapel for the Telyatevsky princely family; and at the southeast corner, a church dedicated to St. Kirill, constructed in 1585 over the site of his burial and rebuilt in 1781-84. 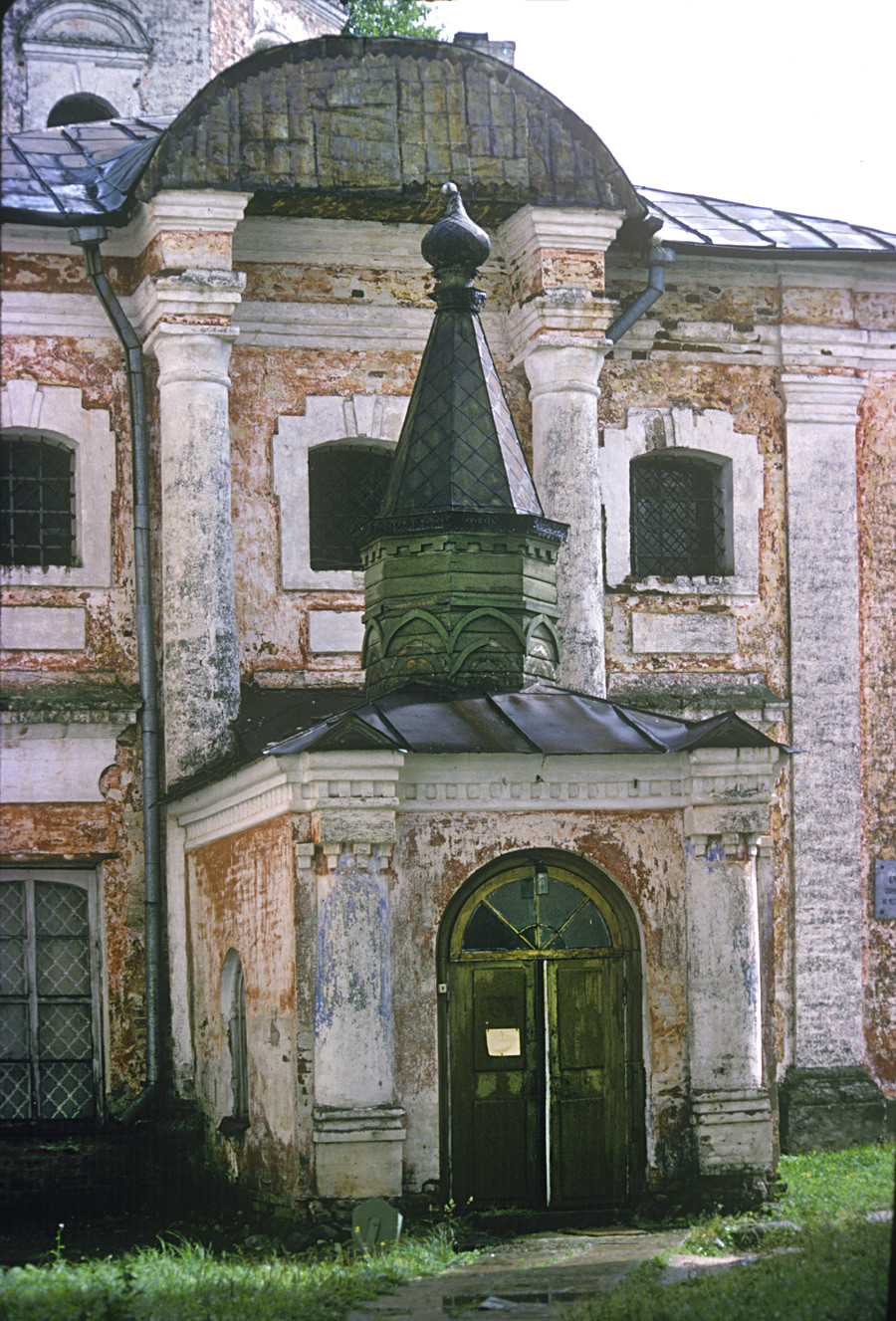 The most destructive changes to the cathedral occurred in the 18th century, when the decorative gables (kokoshniki) of the upper structure were replaced with a four-sloped roof. Despite these changes, the basic form has survived and provides much information on the building and design capabilities of northern masons at the turn of the 16th century. 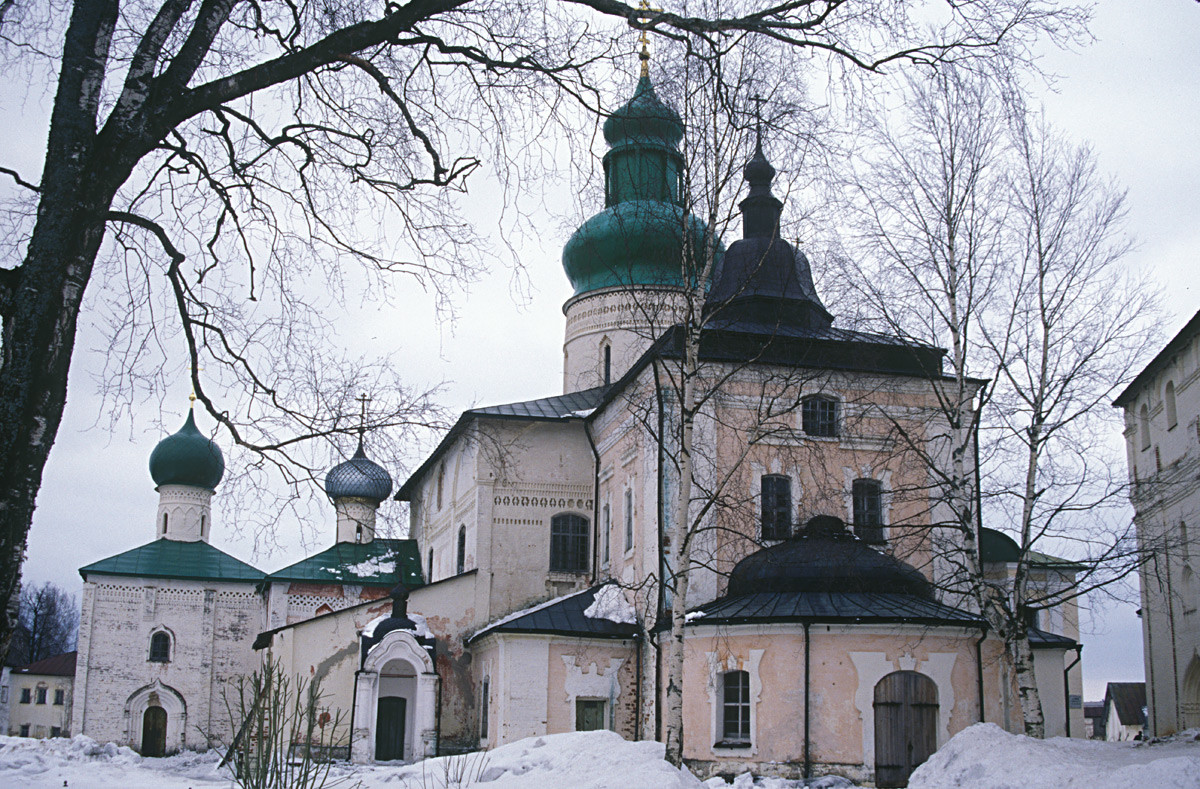 Curiously, there is no record that Prokudin-Gorsky included the Dormition Cathedral exterior among the several structures that he photographed at the monastery. It is only slightly visible in his distant view of the entire ensemble. He did, however, photograph two adjacent structures: the attached Church of St. Kirill and the north wall of the Church of Archangel Gabriel. 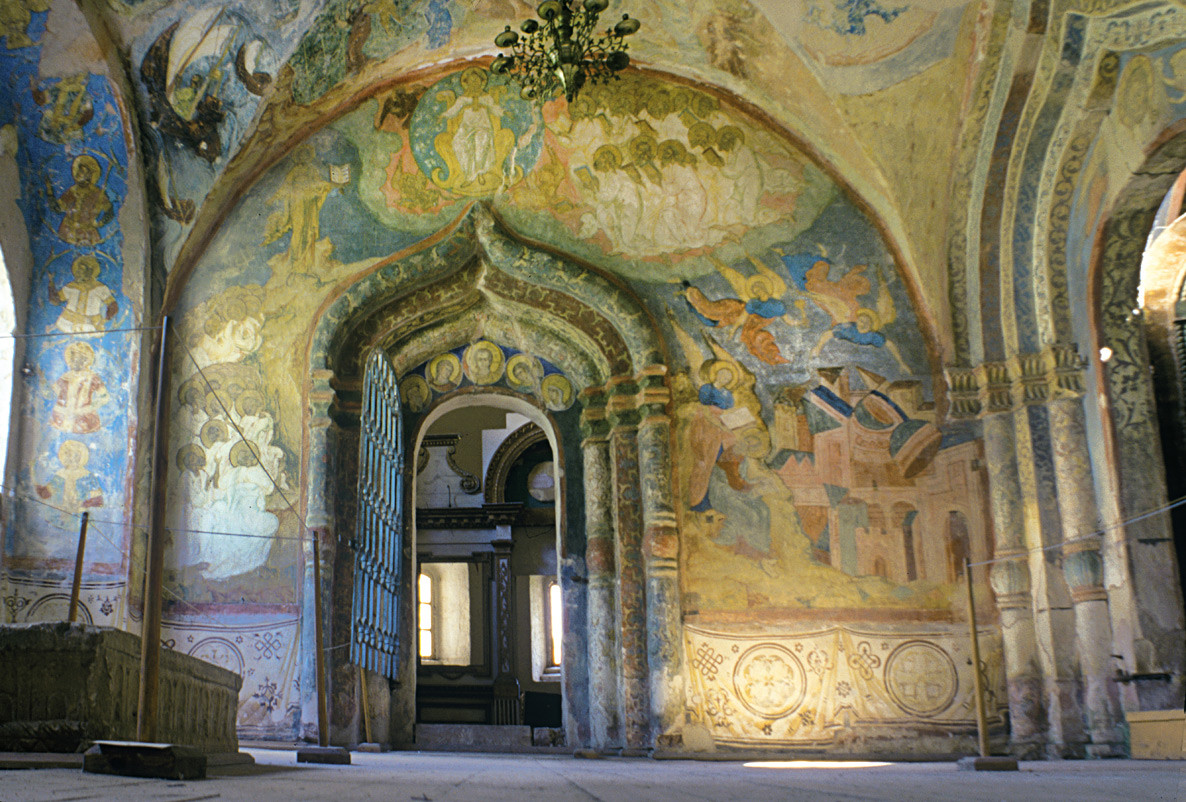 In 1641, the main interior walls of the cathedral were painted with frescoes by a group of artists supervised by Lyubim Ageyev, a master painter from Kostroma. Although they were subsequently painted over (particularly in the 19th century), large sections of the original frescoes have been restored. 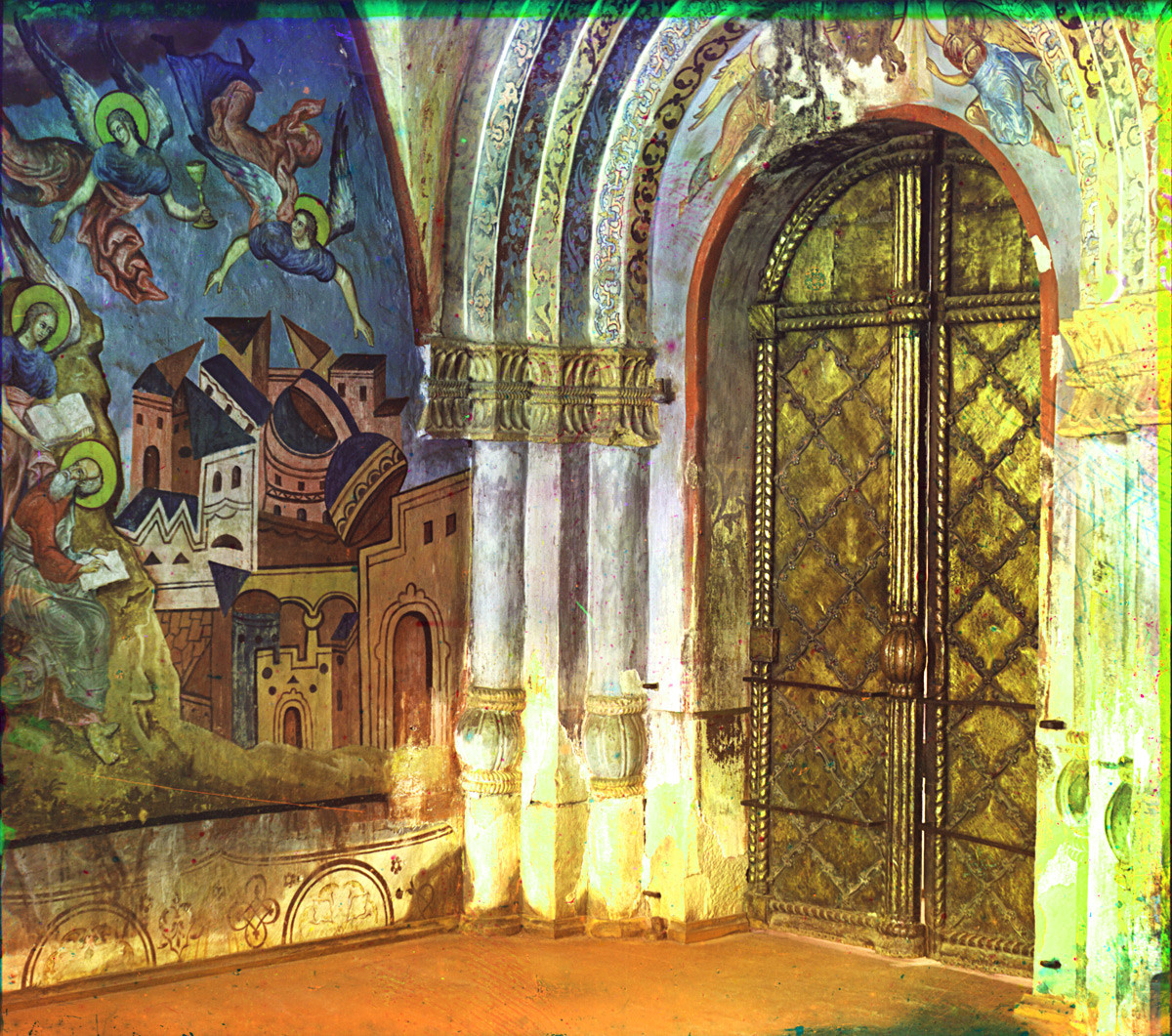 The north parvis (gallery) proved to be a special case. In 1595-96, a one-story enclosed gallery was added to the cathedral’s north and west facades. Although the west gallery was later replaced, the north gallery remained as the entrance to the attached Church of St. Vladimir. The gallery’s fortunate survival has bequeathed some of the most vivid frescoes in medieval Russian art. 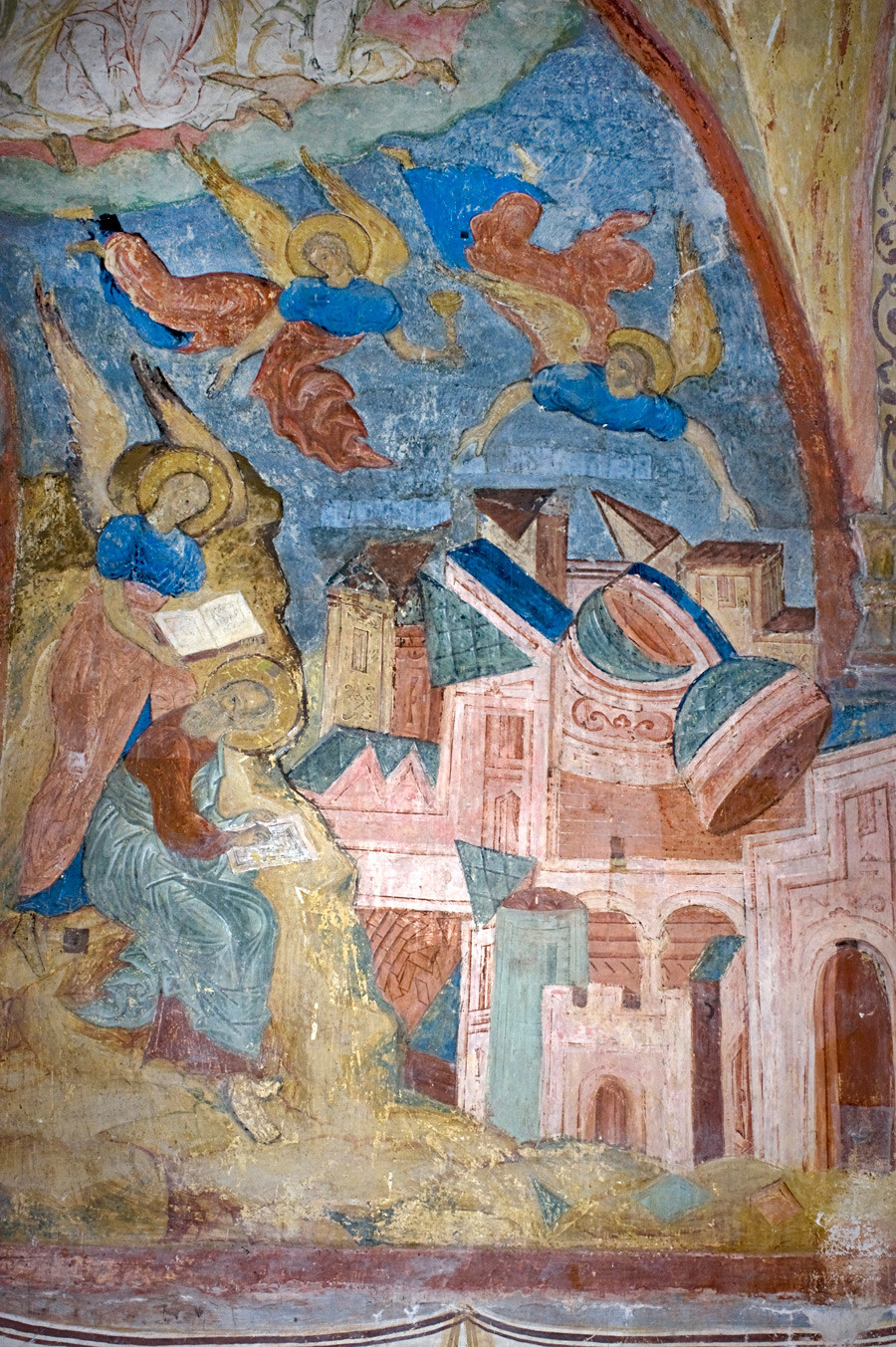 Originally painted at the end of the 16th century, the north gallery frescoes were replaced in the 1650s by wall paintings attributed to a group of masters from Yaroslavl. Among many other scenes, these frescoes include a cycle devoted to the Apocalypse from the Book of Revelation.

The art of destruction

Prokudin-Gorsky was drawn to a particularly vivid moment in this cycle, the Destruction of Babylon (Chapter 18, Book of Revelation). This painting is located between the entrance portal to the St. Vladimir Church and the north portal to the main cathedral space. 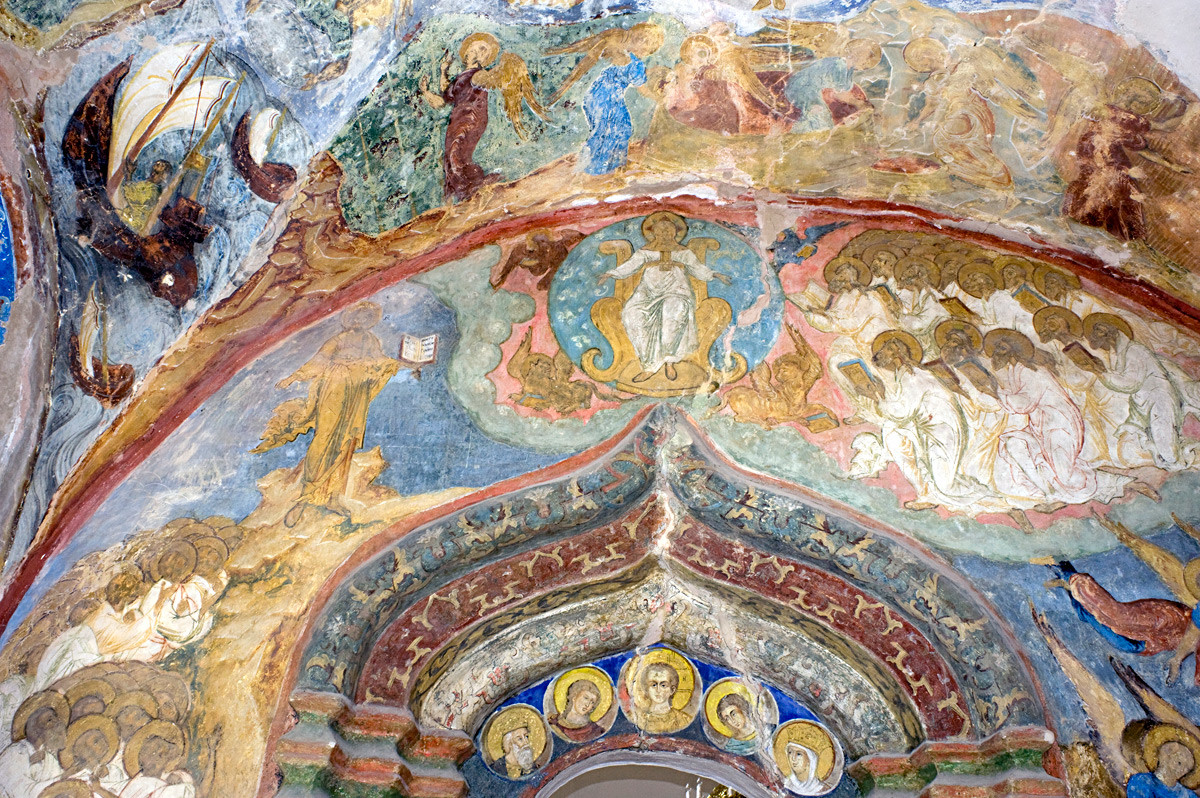 Although the lens of Prokudin-Gorsky’s camera could record only a fragment in this constricted space (the St. Vladimir portal is not visible), the details are clear: on the far left we see the angel holding the book from which St. John is writing the Revelation and in the center, avenging angels oversee the tumbling of Babylon. On the right is the richly decorated perspective arch framing the north entrance to the cathedral. My photographs over a period of some 15 years show scenes adjacent to the Destruction of Babylon. 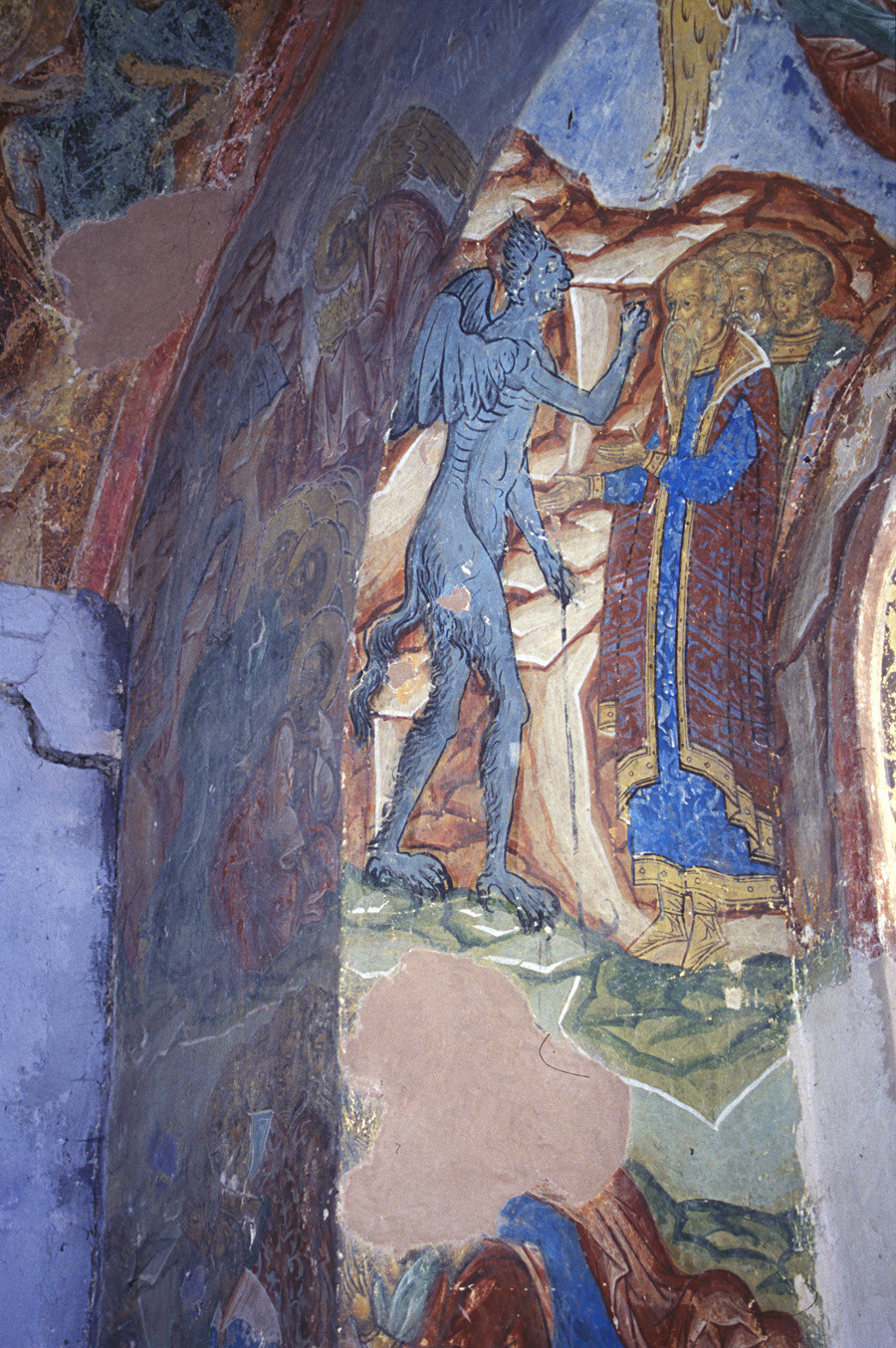 The frequency of such Apocalypse frescoes in mid-17th century Russian monumental art has been linked to the social and political turbulence of period, which culminated in a church schism against liturgical reforms promulgated in the 1650s. A major example is the Apocalypse cycle begun in the 1660s on the south wall of the Trinity Cathedral at Danilov Monastery in Pereslavl-Zalessky. 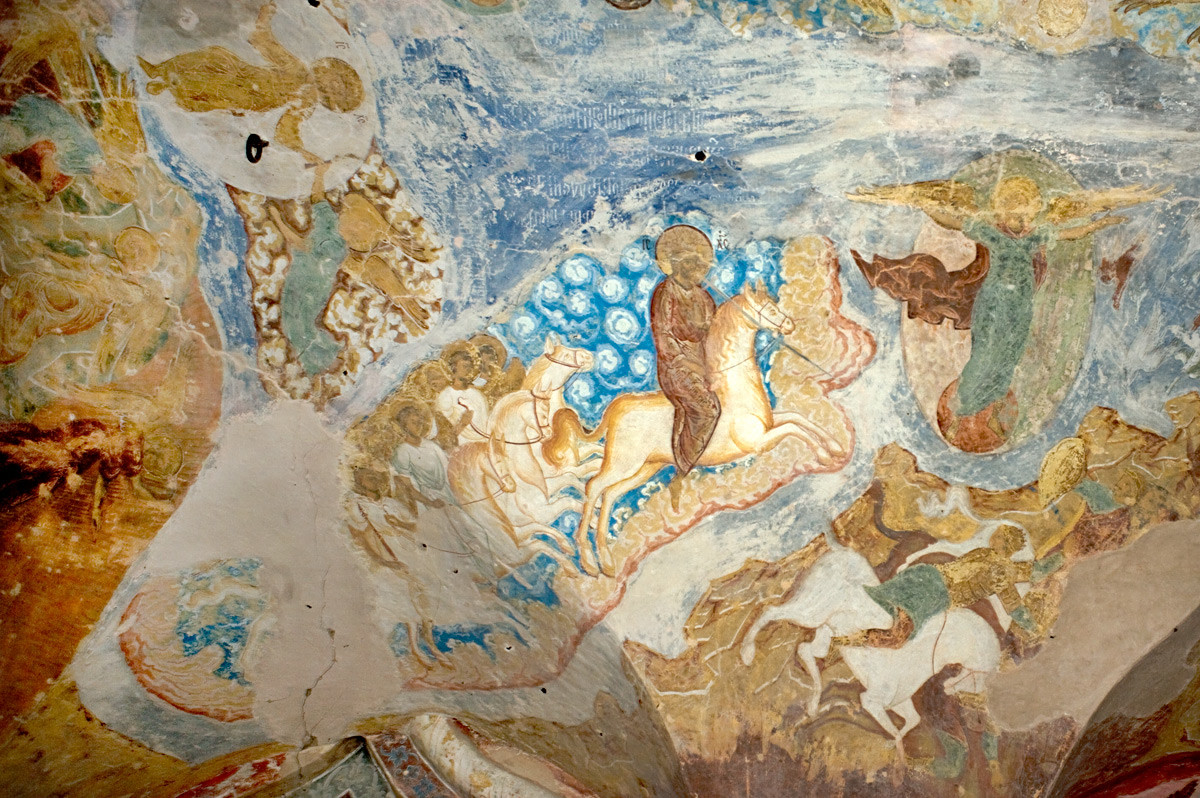 The waning strategic importance of the St. Kirill Monastery led to its neglect during the 18th and 19th centuries. In the late 19th century a revival of interest in Russia’s medieval heritage led to restoration efforts that continued during the early Soviet period. In 1924 the first museum was established in the monastery. 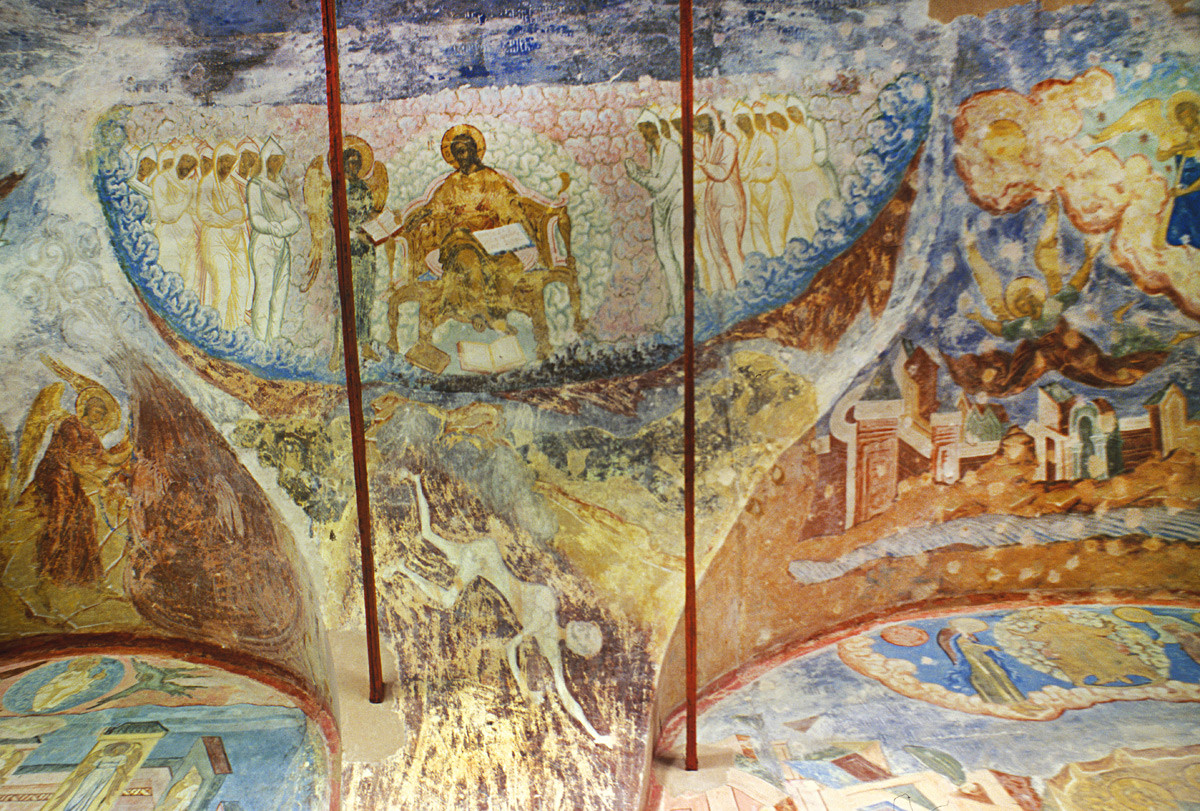 The onslaught of ideological repression in the 1930s undercut much of the museum’s work and led to substantial material losses. Only after World War II did the museum experience a revival. Today the museum and surrounding monastery territory have become a major repository of Russian cultural treasures, including the apocalyptic frescoes within the Dormition Cathedral. 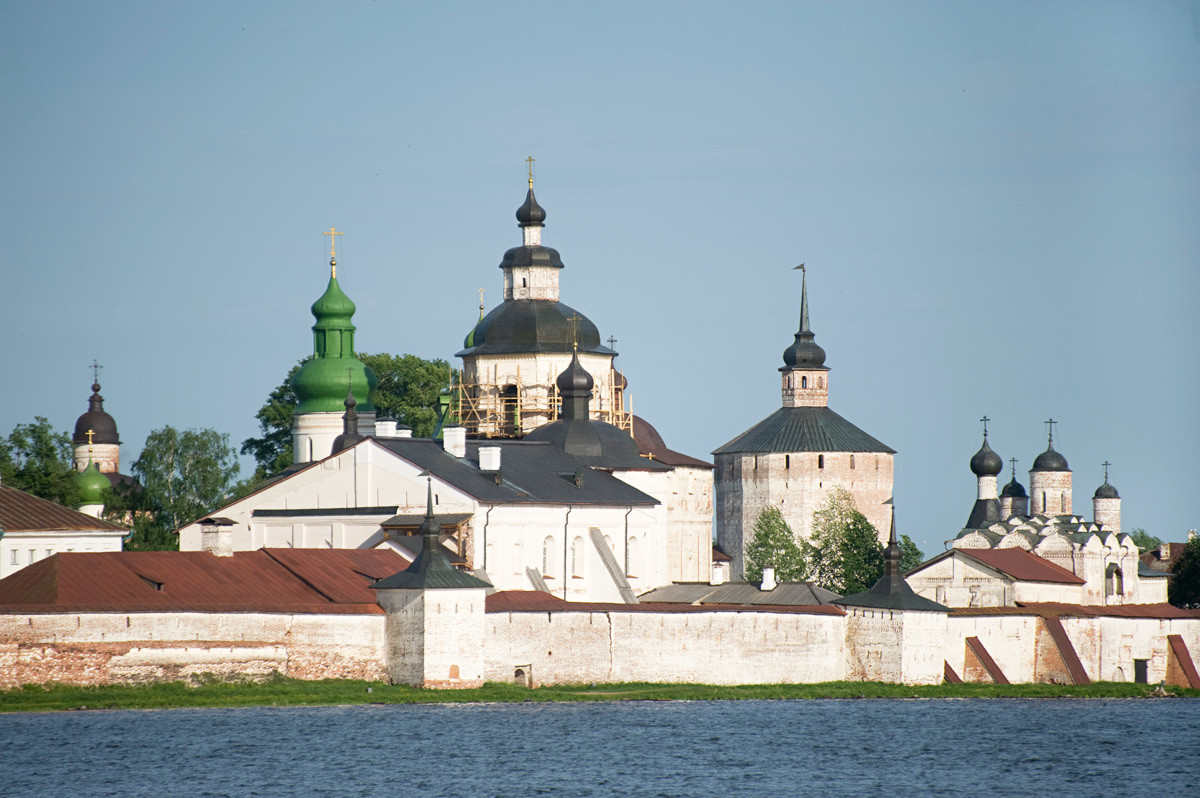 In the early 20th century the Russian photographer Sergei Prokudin-Gorsky devised a complex process for color photography. Between 1903 and 1916 he traveled through the Russian Empire and took over 2,000 photographs with the process, which involved three exposures on a glass plate. In August 1918, he left Russia and ultimately resettled in France with a large part of his collection of glass negatives. After his death in Paris in 1944, his heirs sold the collection to the Library of Congress. In the early 21st century the Library digitized the Prokudin-Gorsky Collection and made it freely available to the global public. Several Russian websites now have versions of the collection. In 1986 the architectural historian and photographer William Brumfield organized the first exhibit of Prokudin-Gorsky photographs at the Library of Congress. Over a period of work in Russia beginning in 1970, Brumfield has photographed most of the sites visited by Prokudin-Gorsky. This series of articles juxtaposes Prokudin-Gorsky’s views of architectural monuments with photographs taken by Brumfield decades later.