What is life like in a town where one in eight residents are artists? 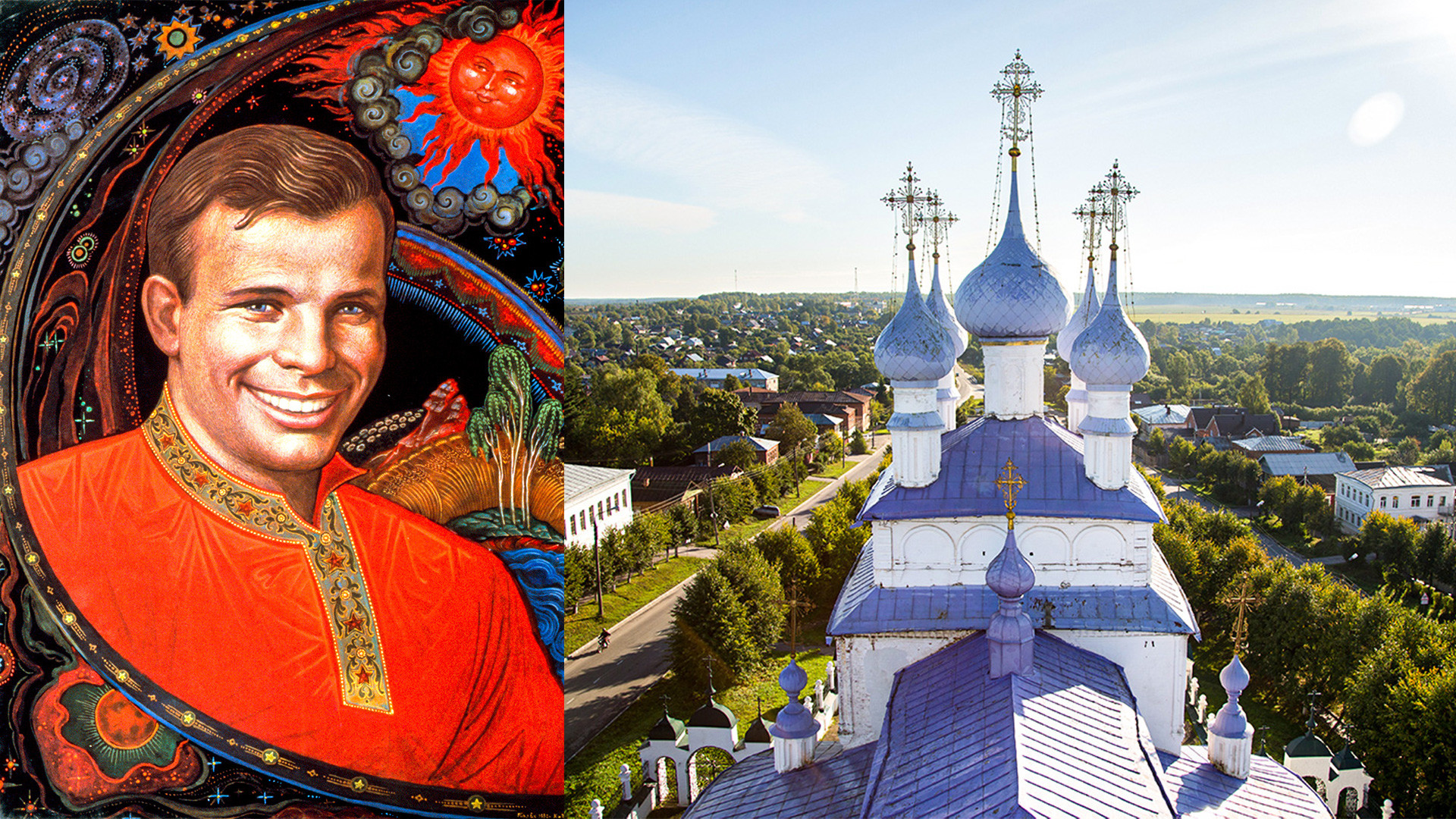 Yury Gagarin in the traditional Palekh style and the view of Palkeh's main church with violet domes.

Legion Media; Maria Sibiryakova/Sputnik
The old town of Palekh is famous all over the world, thanks to its tradition of lacquer miniatures and unique icon painting. It attracts artists from all over the country, who come there to stay.

“One day, I was walking down the street and a passer-by asked me what I did for a living,” recalls Valentina Andriyashkina. “I told him I was an artist. He looked surprised: ‘Just think of it, you are by far the first person I met here who told me they were an artist.’ Well, here, everybody is an artist, in fact!” 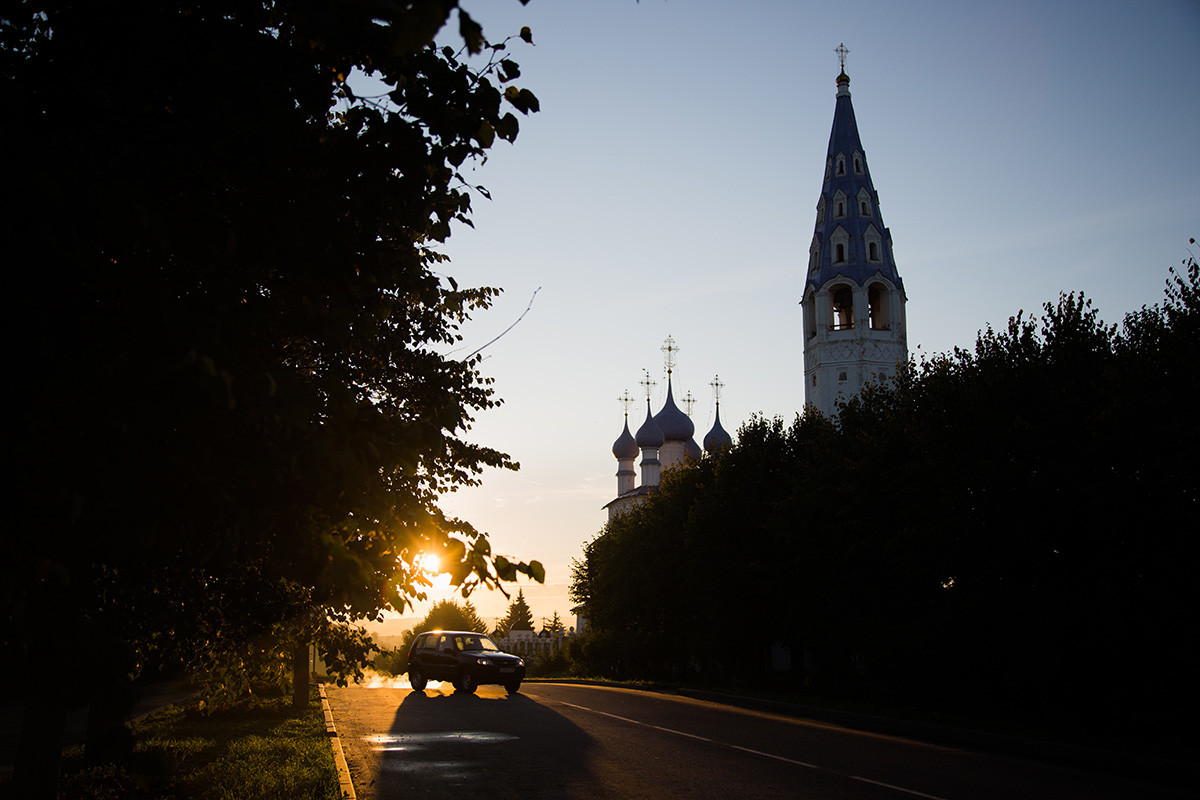 The town of Palekh in Ivanovo Region is a perfect example of provincial Russia as foreigners imagine it: century-old log houses with carved platbands, sleepy cats lying in their windows, babushkas riding bicycles and old Orthodox churches everywhere. There are no stalls with street food here and facades are not ruined by advertising trash; instead, on every street, there are signs saying “workshop” or “museum”. 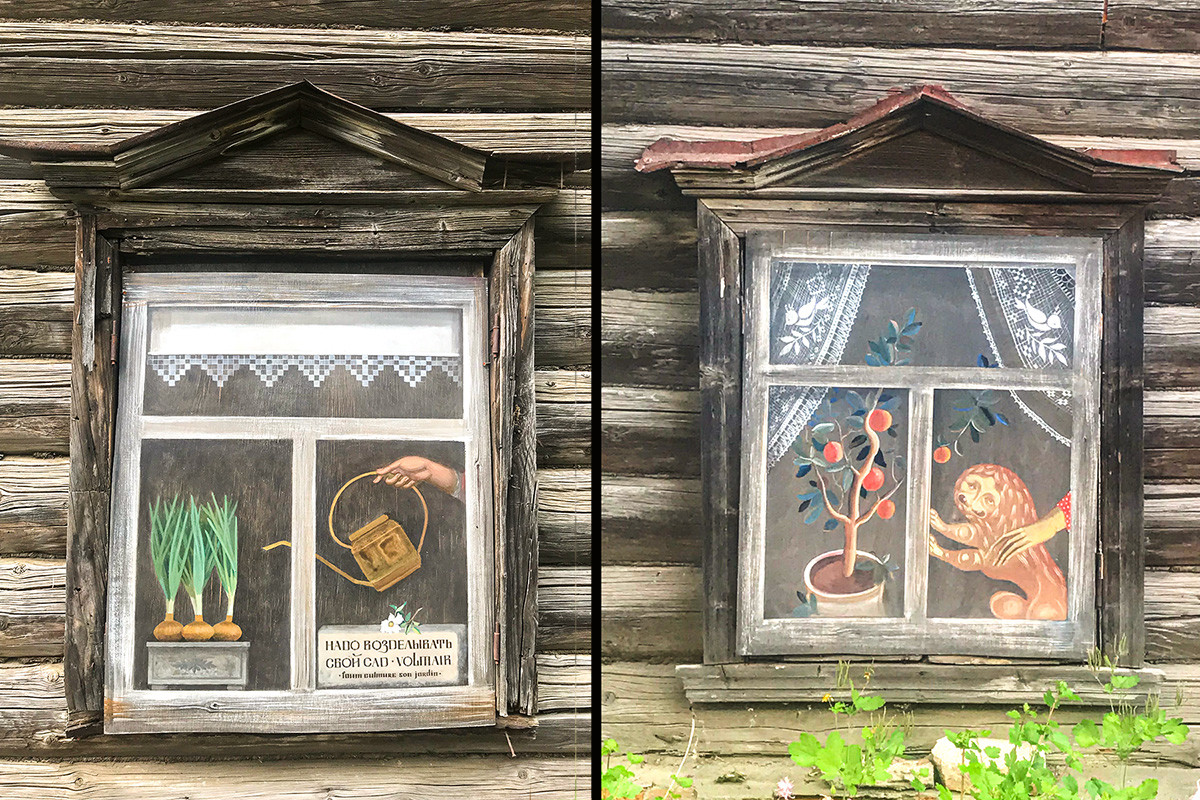 This is how local artists decorated abandoned house.

The most popular occupation in Palekh is that of an artist. In the settlement, which has a population of 4,600, more than 600 residents make a living as artists.

From icons to caskets and back

Back in the 17th century, Palekh was known as a center of icon painting in a unique style, distinguished by almost incredible precision of every detail. Even miniature prayer icons could depict several plots, not only with landscapes painted with surgical precision, but also with discernible emotions on characters’ faces. In the first years of Soviet rule, when the church was persecuted and artists could no longer pursue icon painting, local craftsmen applied their distinctive style to secular art, thus preserving the secrets of their ancient artistic tradition. 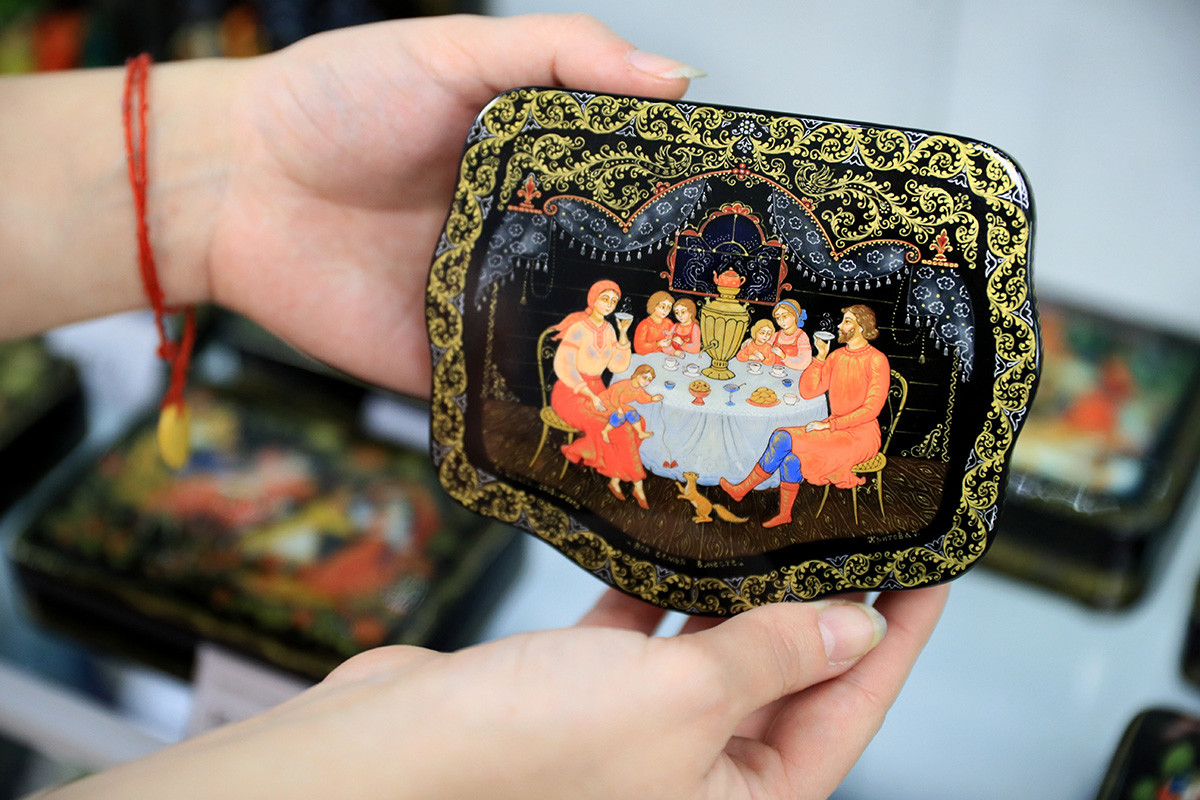 A casket from Palekh.

The first secular miniatures were created by artist Ivan Golikov, who came from several generations of Palekh icon painters. In the 1920s, he created the first lacquer boxes painted in the Palekh style and donated them to a local museum. Soon, a circle of like-minded artists, former icon painters, formed around him and set up an Artel of Ancient Painting. 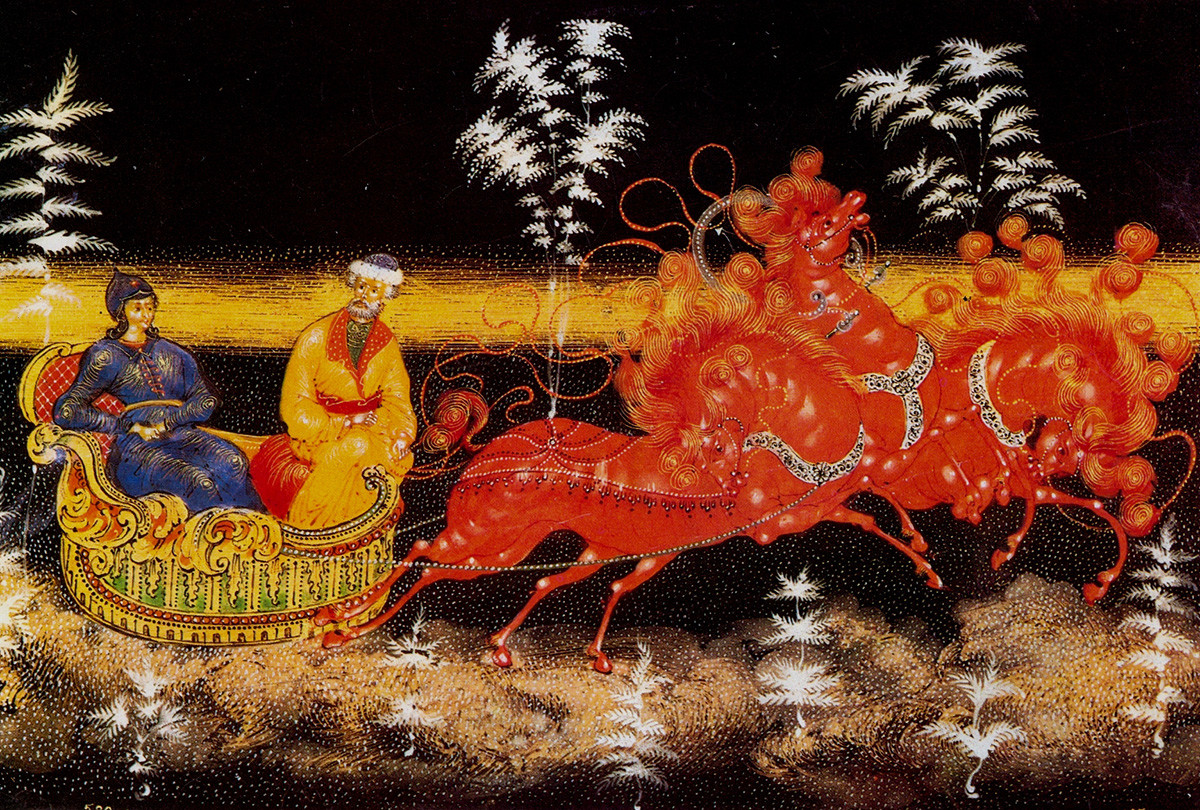 Works by Palekh artists received awards at exhibitions in Venice, Paris, Milan, Berlin and Vienna and the town itself became a center of folk crafts and was later added to Russia’s most famous tourist route, the Golden Ring. 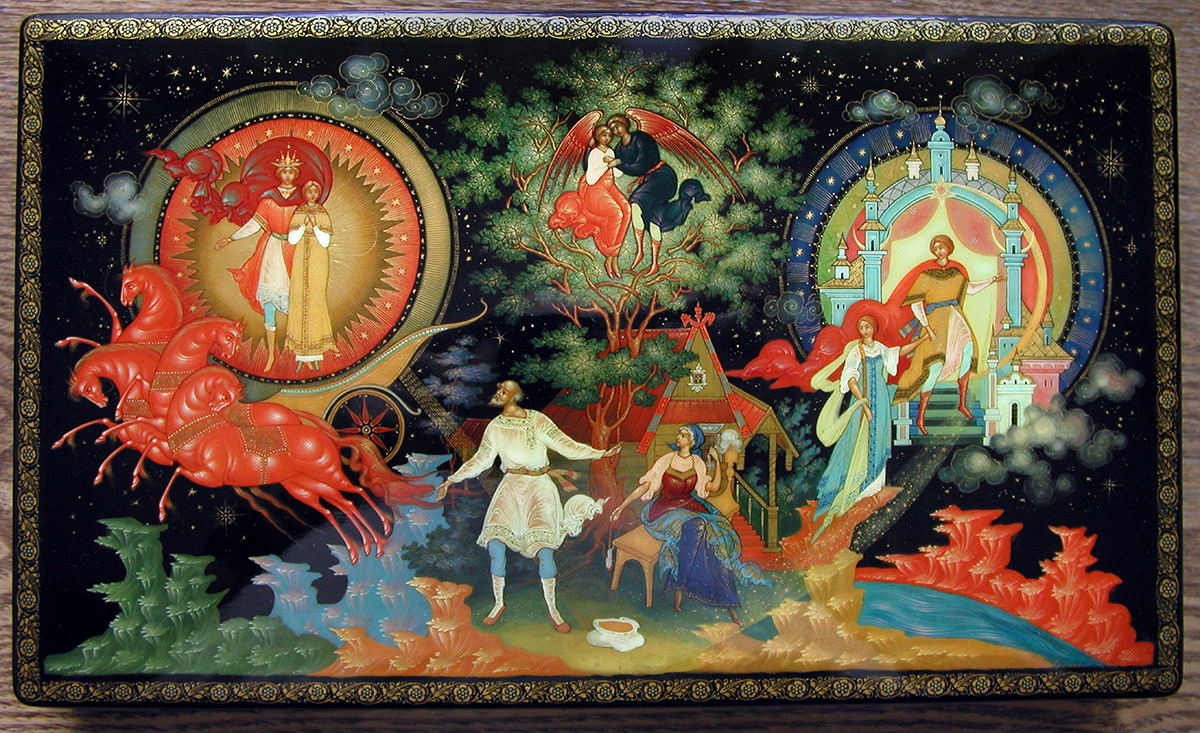 Fairy-tale motifs on the Palekh miniature.

Since 1926, an art school has been operating there, which accepts applicants from all over the country, who come to study and then end up staying in Palekh for life. “My dream was to paint only in the Palekh style and when I saw the museum here with my own eyes rather than from photographs, that made up my mind,” says Yelena Novikova-Schanitsyna, who moved here from Ukhta in 1991. “When I applied for the art school, there was fierce competition for places and I had spent several years prepping for it.” Yelena says that creating intimate miniature items - caskets, brooches - makes her feel like a jeweler.

Each artist specializes on a separate theme: one is very good at painting Russian troikas, another’s strength is the depiction of fairy-tale storylines or landscapes. There are even miniaturists whose specialist subject is space exploration! 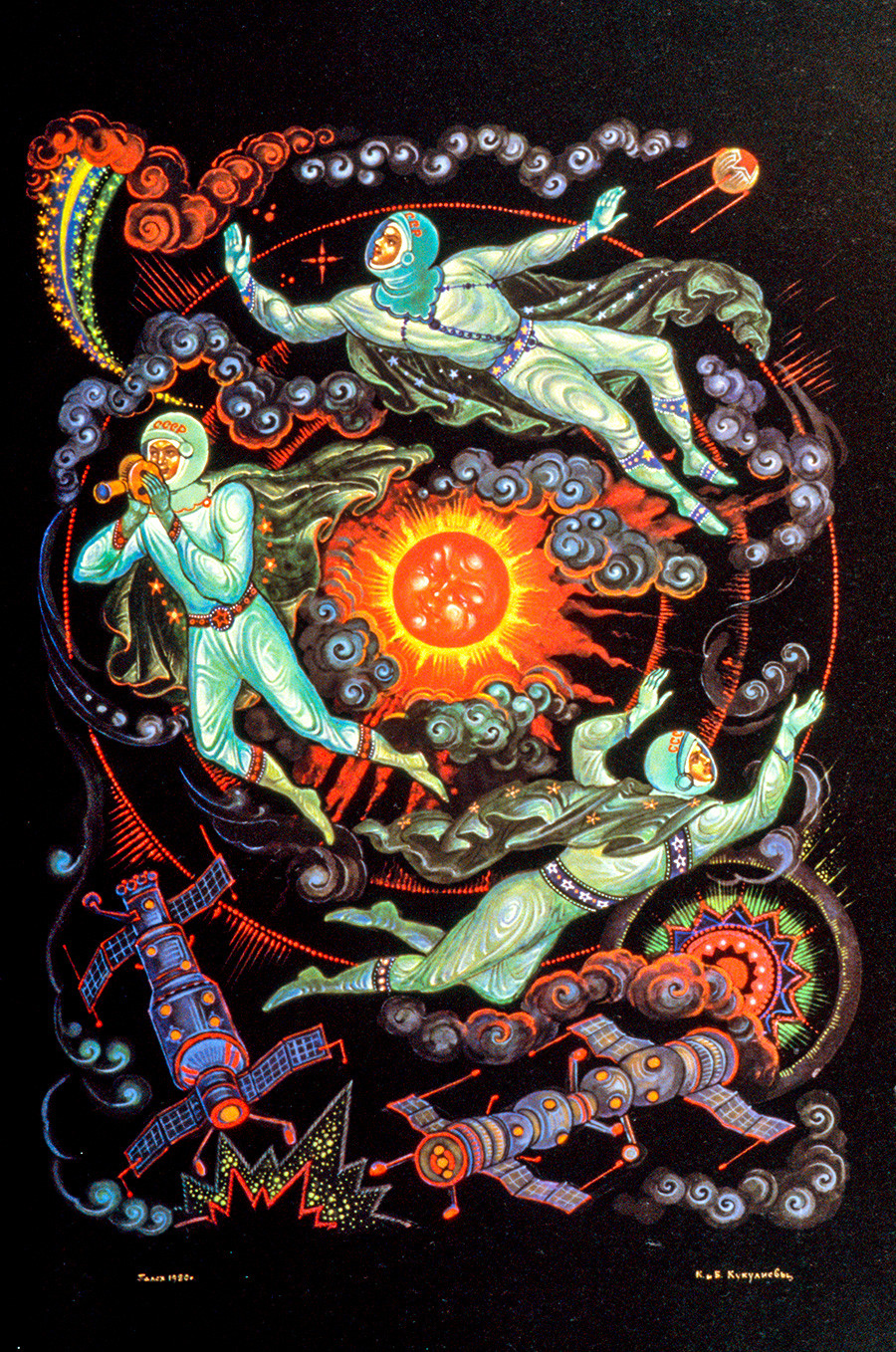 A lacquer box is an expensive item (prices start at 6,000-7,000 rubles, approx. $90), but the artist makes little money from it. Each takes at least a week, but often more often a month, to complete. That is why young graduates who want to make quick money set up brigades and travel all over the country and beyond to paint churches. “No-one churns out the same thing, each brigade has its own style, although one would think that canonical painting does not imply self-expression,” says Valentina. She herself prefers to work with traditional lacquer miniatures, painting caskets to order. While her husband Roman, after 10 years of experience in Palekh painting, switched to the restoration of church painting. His workshop is based in Moscow, where most of the orders come from, so he lives between the two locations. 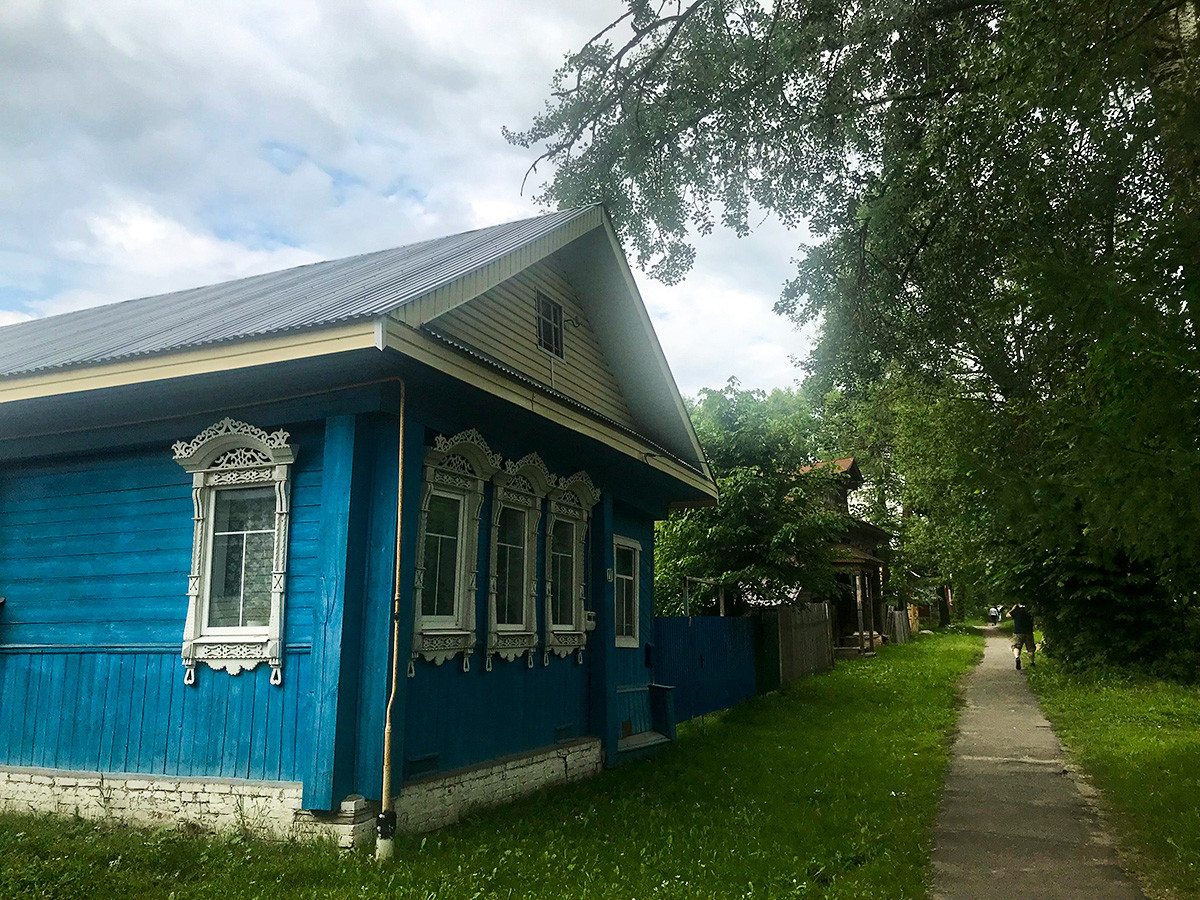 A street in Palekh.

“After many years of working just with miniatures, Palekh had to re-learn how to do icon painting. We caught that period when we were graduating from college in the mid-1990s and icons were reviving again. That led to the establishment of carpentry workshops and the emergence of woodcarvers,” Roman and Valentina recall.

Marina Galkina, a member of the Redis Constellation art association and curator of exhibitions at the Workshops art center, came to Palekh from Obninsk near Moscow and her husband from Syzran. The Palekh art center is hosting an exhibition of her paintings with alphabetic and animalistic compositions, yet she, like most artists here, also does icon painting. The couple have their own workshop in Palekh. “I wanted to study at the Surikov Institute in Moscow (one of the leading art institutes in Russia), but my mother read about Palekh in some magazine and decided that it would be better for me to study here,” says Marina.

As the artists themselves say, Palekh is a territory of creativity that unites a wide variety of people. Although there are no grants or incentives for artists here, many remain to live here. “It's probably because of the atmosphere,” says Marina. “A huge number of artists have always lived here, but no-one has ever copied another’s style, rather everyone tried to find their own within the framework of a common style.” 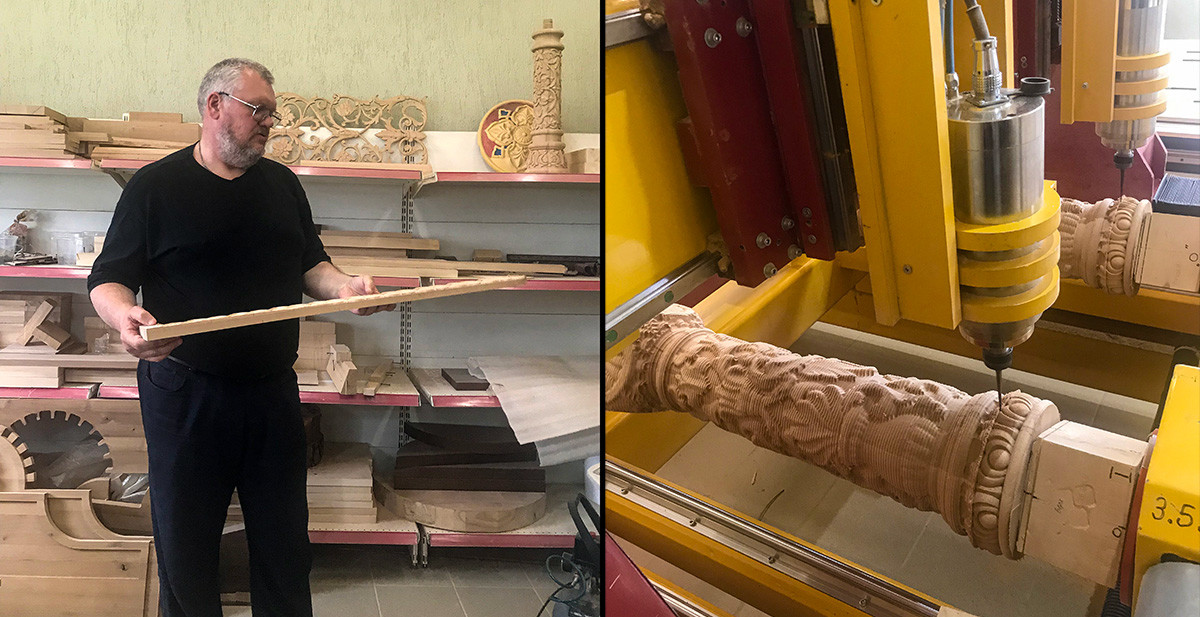 Anatoly is showing some details of iconostases.

Palekh artists Anatoly Vlezko and Yuri Fedorov set up their workshop producing iconostases in 1996. At first, it employed just six people, whereas now it has a staff of over 150 and hires additional craftsmen to work on specific commissions. The workshop, which is called ‘Palekh Iconostasis’, receives orders not only from Russia but also from abroad, most recently Great Britain and Germany. 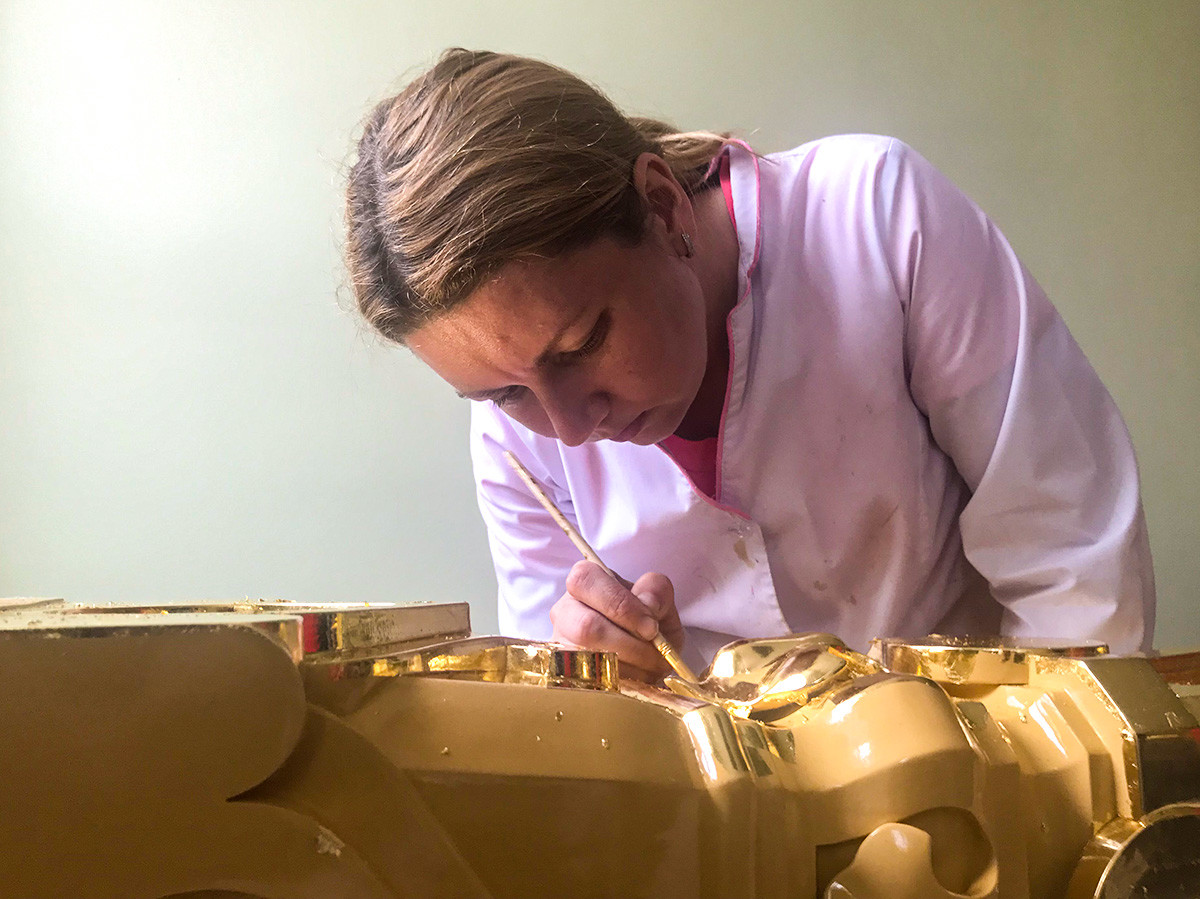 An iconostasis can take from a couple of weeks to five or six years (!) to make. On average, provided the design is agreed on quickly, an iconostasis can be made in a year. The prices start at 150,000 rubles (approx. $2,000) per square meter. Everything is done both by hand and using special machines.

The job of painting the icons and gilding elements of the iconostases is usually done by young women, as it requires very delicate work. “We have division of labor here, everyone does what they are best at,” says one of the craftswomen. “For example, I paint gold letters on icons.” 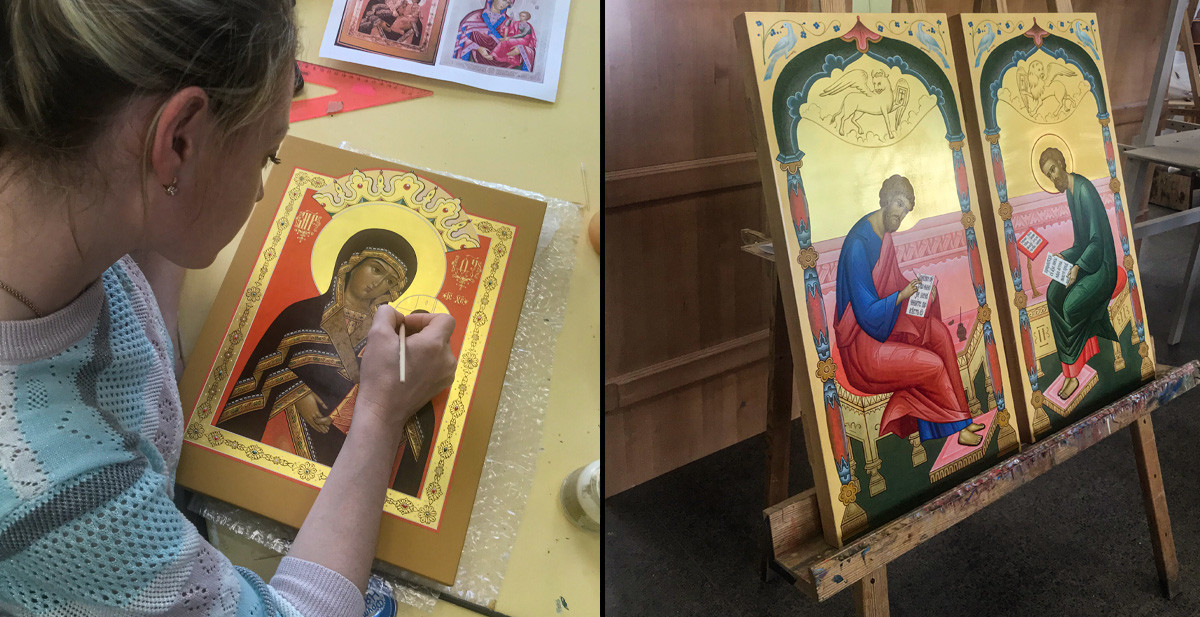 Same as Roman, Anatoly at first worked with lacquer miniature, but then he saw potential in working on church decoration. He says that even during the years of economic crisis, he had no intention of leaving Palekh. “There is a large concentration of artists in Palekh: everyone sees what the others are doing and all the works immediately become public,” he says. “I believe that development can only be here, this is the artistic center of the world.” If true, then his daughter, who is already working with him, is in the right place.