The hidden waters: 6 rivers of Moscow that flow in tunnels 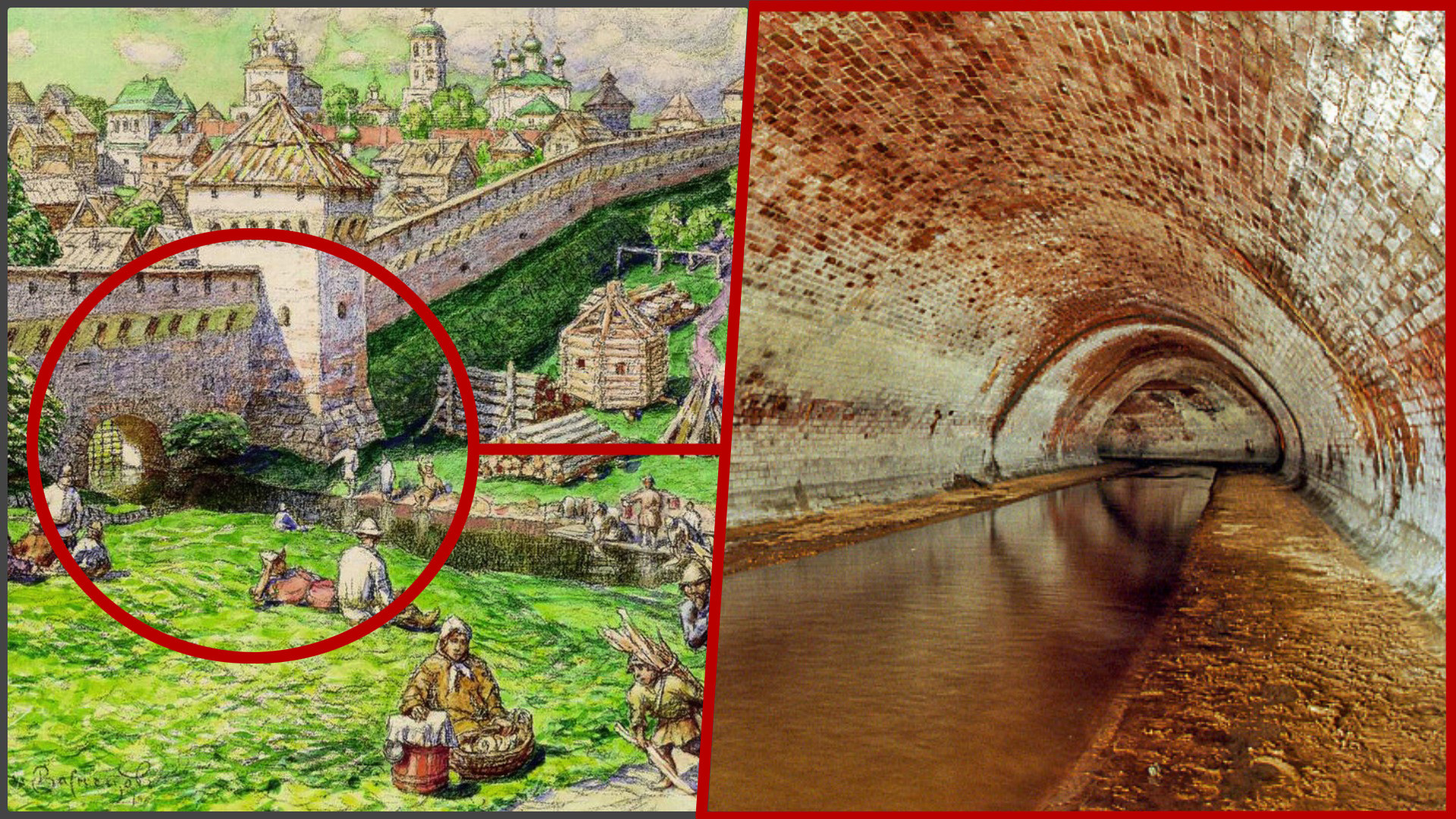 Museum of Moscow; SkyFi (CC BY-NC 3.0)
There are a bunch of rivers and brooks in Moscow that have been moved underground and some of them are really long. 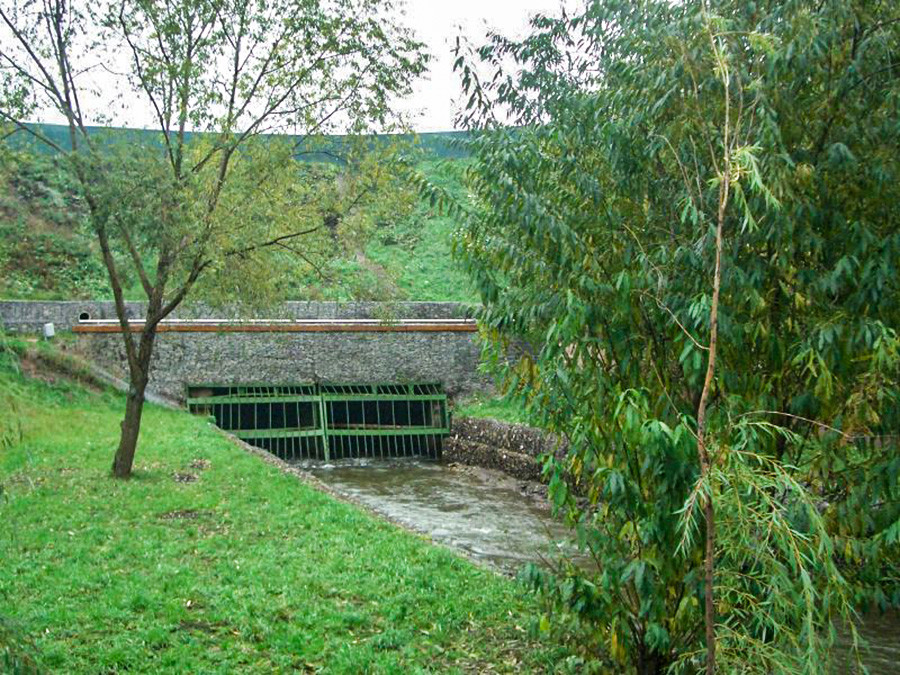 Likhoborka is the longest underground river in Moscow: it’s 18 kilometers long and 14 of them flow under the city territory. There are two versions of the name’s appearance. The forests that surround Dmitrovskoye Highway were in the past called ‘Likhoy Bor’ (“Daring Wood”), because of the thieves who lived there and would attack travelers, and the river might be named after these forests. Or, it could be named after Bolshye Likhobory and Malye Likhobory - two villages that were situated nearby. The river starts some kilometers to the north of the Moscow border, crosses the Moscow Ring Road, flows openly along Likhoborskaya Embankment, then goes underground and comes back up the surface a few kilometers later. Then, it flows through a tunnel that opens into the Yauza River.

At the times of Peter the Great, there existed an idea to connect the Moscow and Volga rivers with a channel using a chain of rivers including Likhoborka, but such a plan was unrealizable at the beginning of the 18th century. However, the river was part of an important waterway to Vladimir (located 180 kilometers northeast of Moscow). Likhoborka’s surroundings were quite swampy but after the river was taken underground, its former area was built on quite densely. The same thing happened with many tributes of Likhoborka, such as Beskudnikovsky Brook. 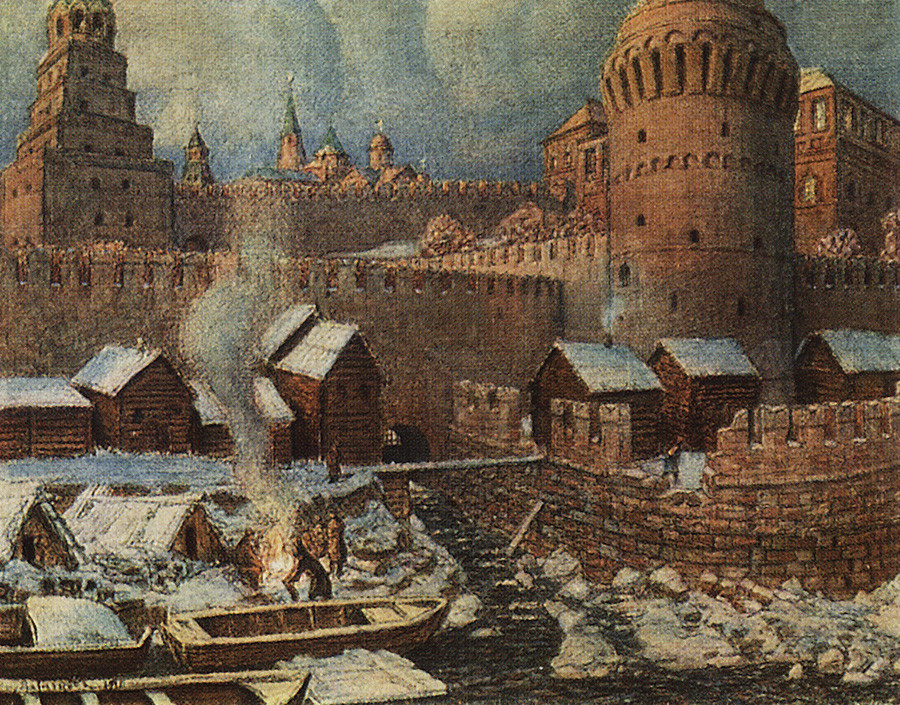 The outfall of Neglinnaya in the 17th century.

Neglinnaya (also commonly called ‘Neglinka’) is the most famous underground river in Moscow. There are different versions of its name etymology; for example, it could come from the word ‘neglinok’ that means a small swamp. Neglinnaya is 7.5 kilometers long. It starts in the north of the city and flows to the south through the center. Neglinnaya was getting dirtier and dirtier through time, as the muscovites would throw their garbage into the water and Moscow didn’t have a drainage system for centuries. Also, the river would flood the nearby streets after heavy rains. All these problems were common for Moscow’s now hidden rivers. 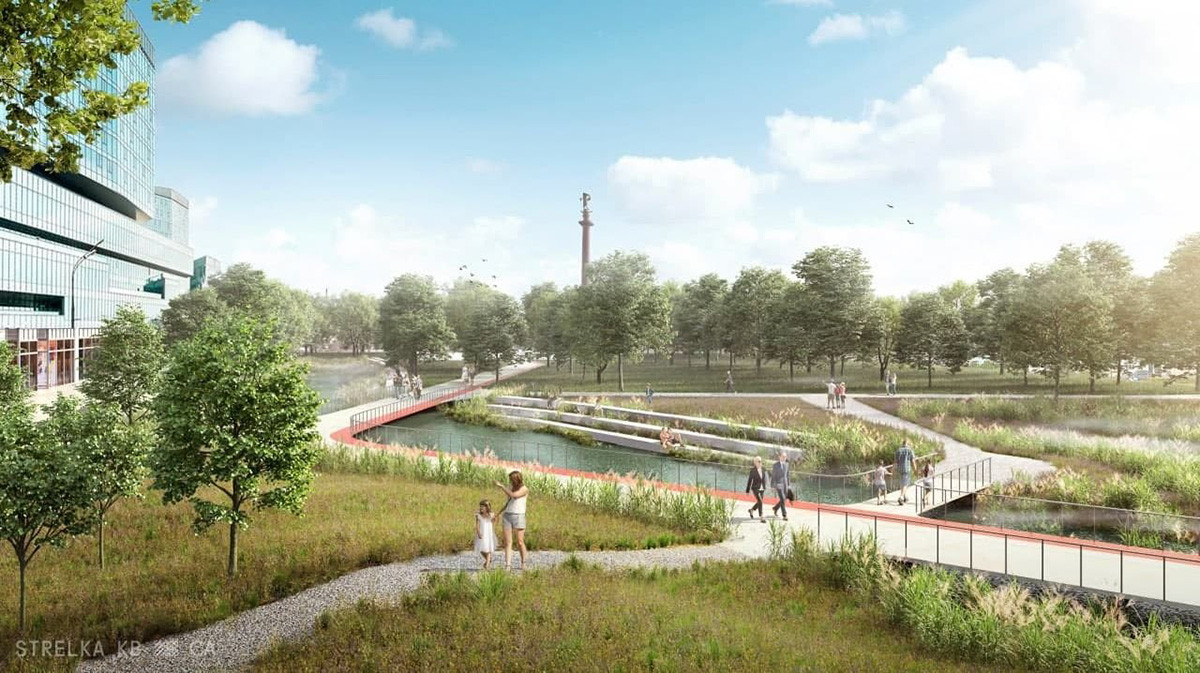 Tsvetnoy Boulevard is imagined with Neglinnaya on the surface.

At the end of the 18th century, the corridor of the smelly and dangerous river was turned into a water channel and, in the 1810s, Neglinnaya was moved into an underground tunnel. It helped clear the river from the garbage, but the drainage system only appeared in Moscow at the boundary of the 18th-19th centuries. The first tunnels were still too small to hold the rising water level, so floods continued to happen until the 1970s, when an extra pipe for Neglinnaya river was built. In 2021, a Russian urbanistic company proposed to open the river again, as it could improve the urban habitat, but Moscow authorities rejected the idea, deeming the project too difficult and expensive to complete. 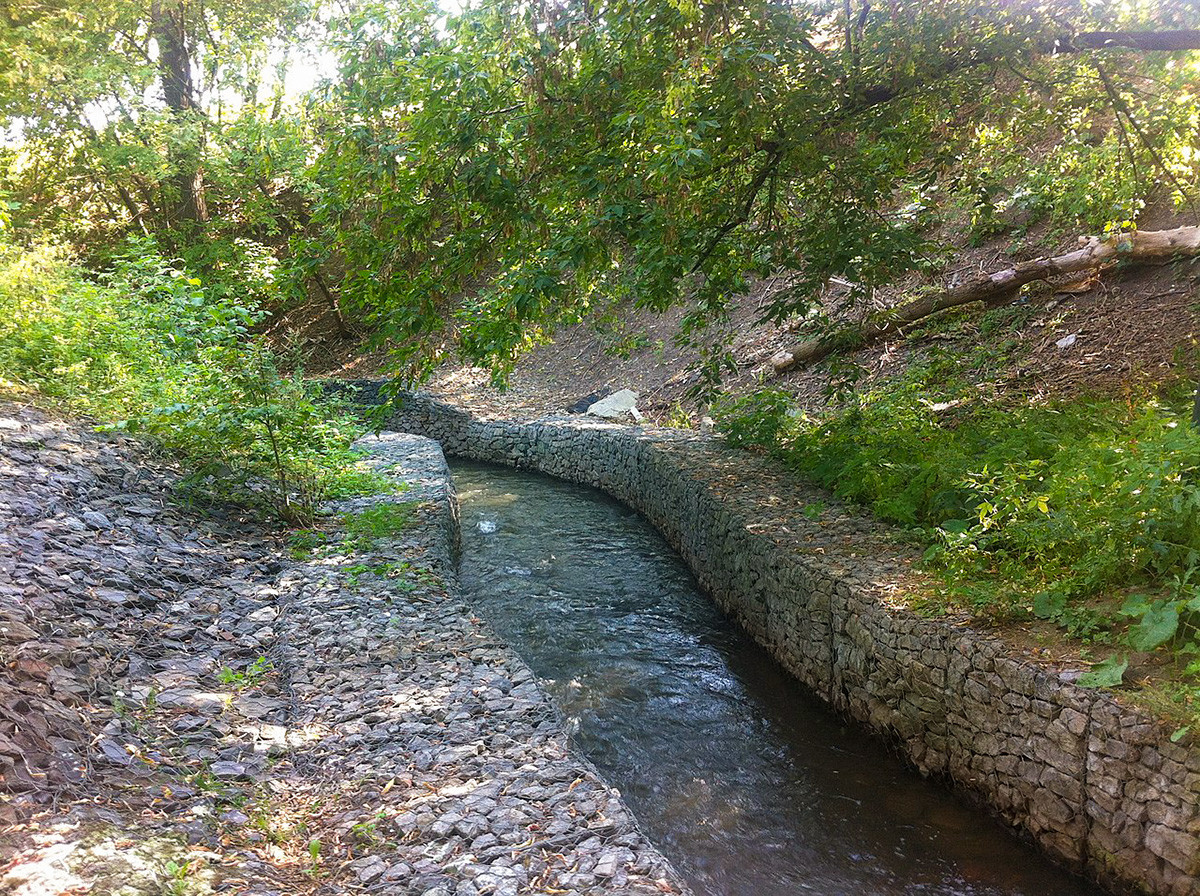 Open part of Chura near the Danilovskoe Cemetery.

Chura is one of Moscow’s old small rivers. Experts aren’t sure about the origin of the river’s name. There is a version that ‘chura’ means a sandbank. The second says that the name comes from ‘chur’ - a border. Chura is 7.3 kilometers long. It starts in the south-west of the city and flows to the north-east. On its way, the river has a 500 meter long open part. After it, Chura returns underground and soon joins the Moskva River by the Novodanilovskaya Embankment. Like many small rivers of Moscow, Chura was moved underground in the 19th century. The oldest part of the tunnel that still remains nowadays was built in 1906. It has granite walls and vaults of white stone. The tunnel of Chura is also used for the disposal of subsoil waters from the Moscow underground and other facilities to prevent them from flooding - a common case for such rivers. 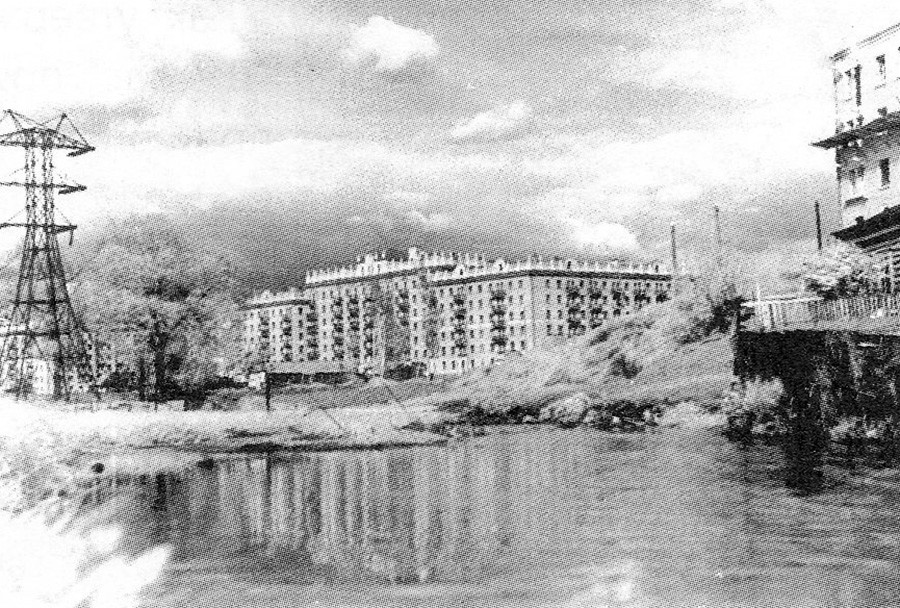 Tarakanovka on the surface in 1950s

The name of Tarakanovka River probably comes from a proper name, but researchers aren’t sure which one it could exactly be - the original word could have significantly changed while settling down as a small river name. Tarakanovka is known to be about 5 kilometers long; it starts in Voykovsky district in the north-western part of Moscow, then goes to the south-west and joins the Moskva River. Not far from its outfall, Tarakanovka goes comes to the surface for 300-400 meters. The corridor of the river is built on with residential buildings and industrial and transport facilities. Between 2009-2012, Tarakanovka suffered much from construction of an underground road tunnel near the river head - the workers disposed of bentonite solution, so the river bed got a 1.5 meter layer of this type of clay over an area of 2 kilometres. Tarakanovka didn’t only bring polluted water to the Moskva River, but also could flood the neighborhood after strong rains. The following construction works at the road tunnel were connected with clearing Tarakanovka and the river even got a new underground channel. 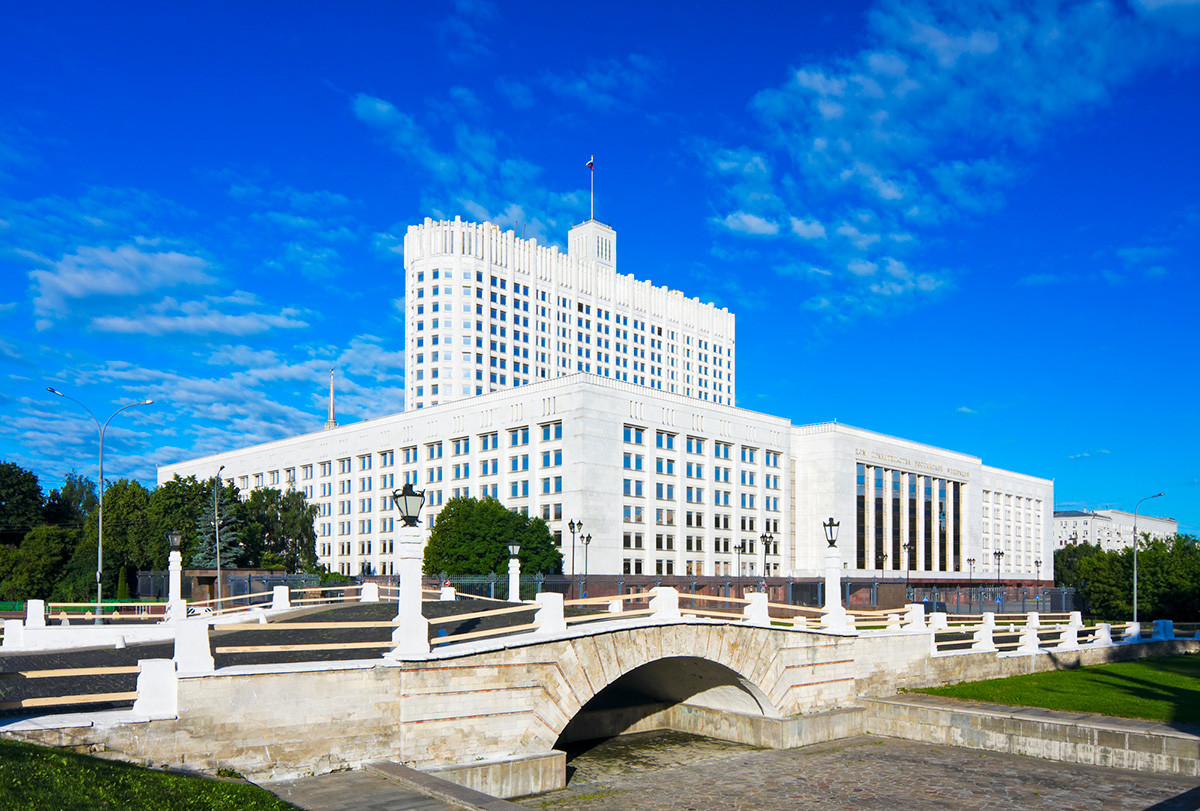 Gorbaty Bridge and the White House.

Presnya is one of the older and smaller hidden rivers. Its traditional name, most probably, comes from the word ‘presny’ in the meaning “clean, fresh”, but it also has an unofficial name Sinichka which is likely taken from Presnya’s tribute of the same name. It could have been given for the blue (‘siny’) color of the water. Presnya is about 4.5 kilometers long and starts near the ‘Dinamo’ stadium in the north-western part of the city. Then, it flows to the south-east and paases the Moscow Zoo on its way, before it joins the Moskva River. Presnya was moved underground in 1908. Before that, the river was connected with lots of ponds, but now, they only remain on the territory of the Moscow Zoo, as all the others were drained. Another reminder of Presnya’s past is Gorbaty Bridge, which was used to cross this river. The bridge is located near the White House (the House of the Government). 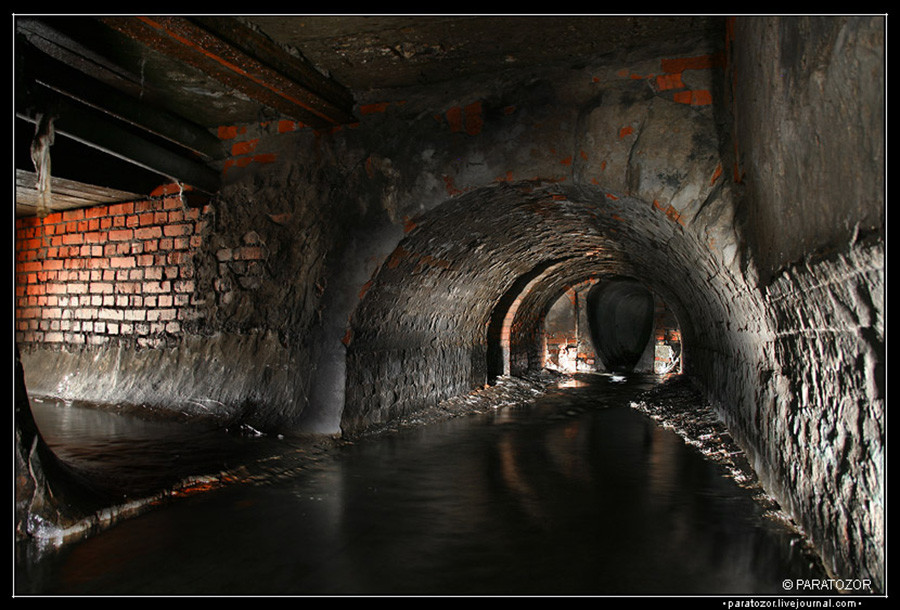 The Moscow underground water system doesn’t only consist of rivers. It also includes many brooks, for example, Chertoriy (it can be spelled ‘Chertoroy’ or ‘Chartoriy’, too) in the center of Moscow. The brook created a deep ravine, which was named ‘Chertoriy’, because people said that the “devil dug it” (‘chert ryl’). It was the name of many Moscow ravines, but this one kept it through centuries and gave it to the brook. The length of Chertoriy is about 2 kilometers. It starts in the north-western part of the city center, flows south-east and joins the Moskva River near the Christ the Savior Cathedral. 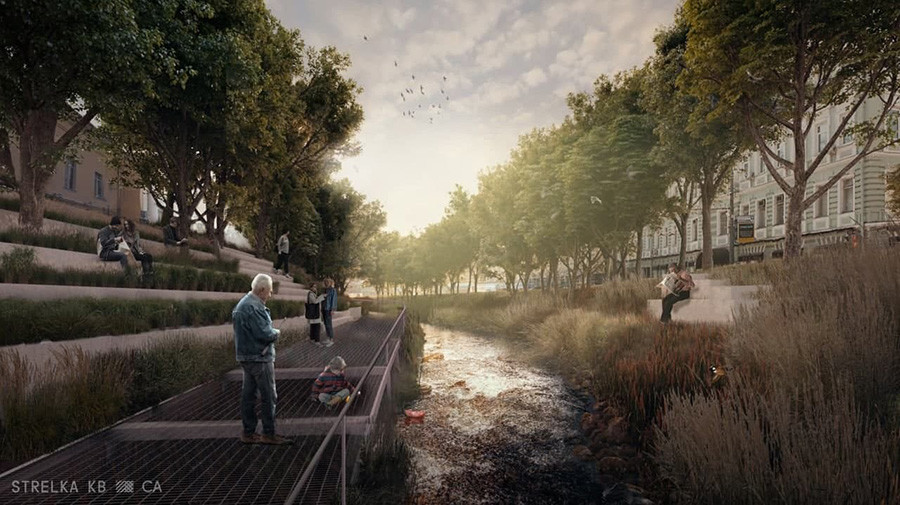 Chertoriy was hidden in a tunnel in the 19th century. The brook gave name to the Chertolye district around it. It used to have a reputation as a mystical place under a cloud with many legends. Now, this is the northern part of Khamovniki district. Like Neglinnaya, urbanists had an idea to return Chertoriy to the surface. However, so far, there are no plans to do so, either.