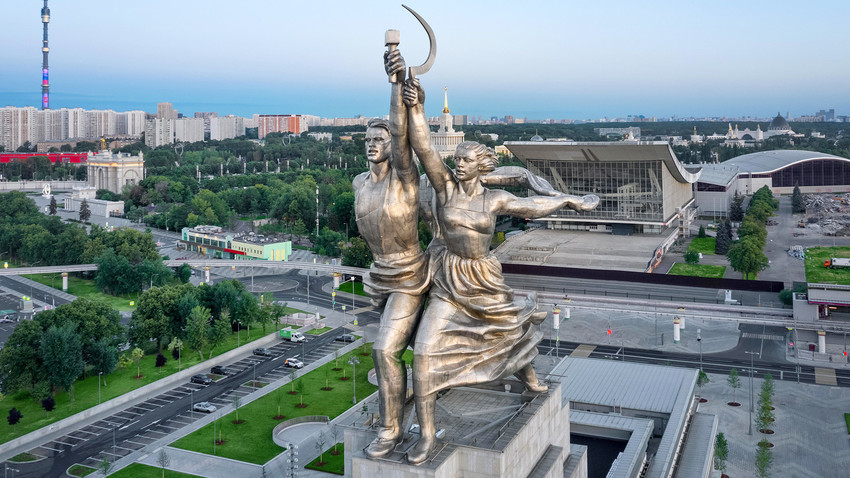 Legion Media
Size matters when it comes to monuments. To prove that point, we’ve selected some of the capital’s most epic masterpieces of architecture that reach the sky and reflect the rich Russian history, culture and heritage.

At 141.8 meters, it’s the tallest monument in Russia. But it’s not just some random number, as the whopping height symbolizes the number of days that World War II lasted - 1,418. Every 10 centimeters stands for a day of the devastating war, which claimed the lives of around 27 million Soviet citizens. 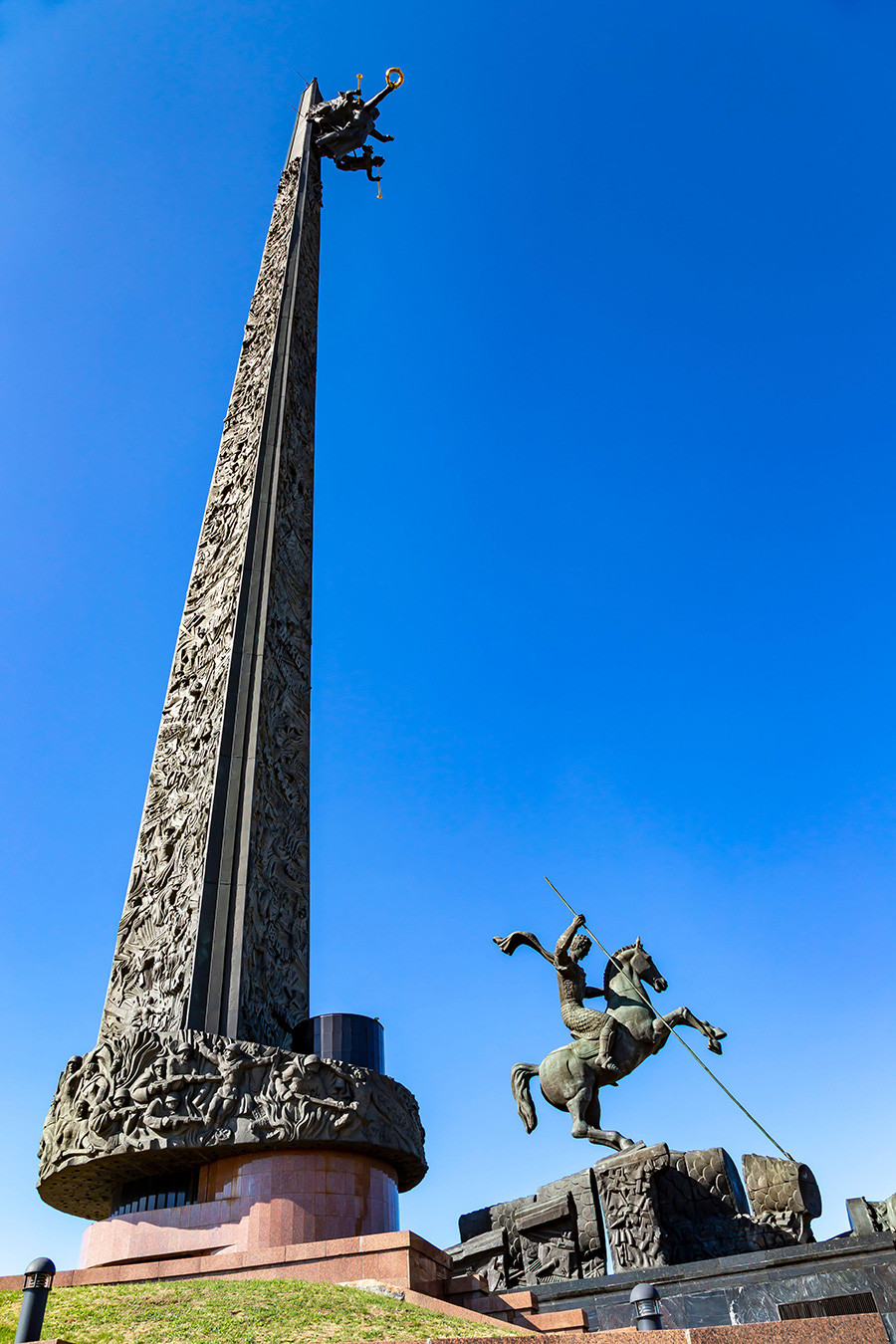 The epic monument consists of two parts. The lower segment features a sculpture of St. George slaying a dragon, which, in this case, symbolizes fascism. Behind the sculpture stands an obelisk in the shape of a bayonet, awash with the names of the key Soviet cities where WWII was fought. 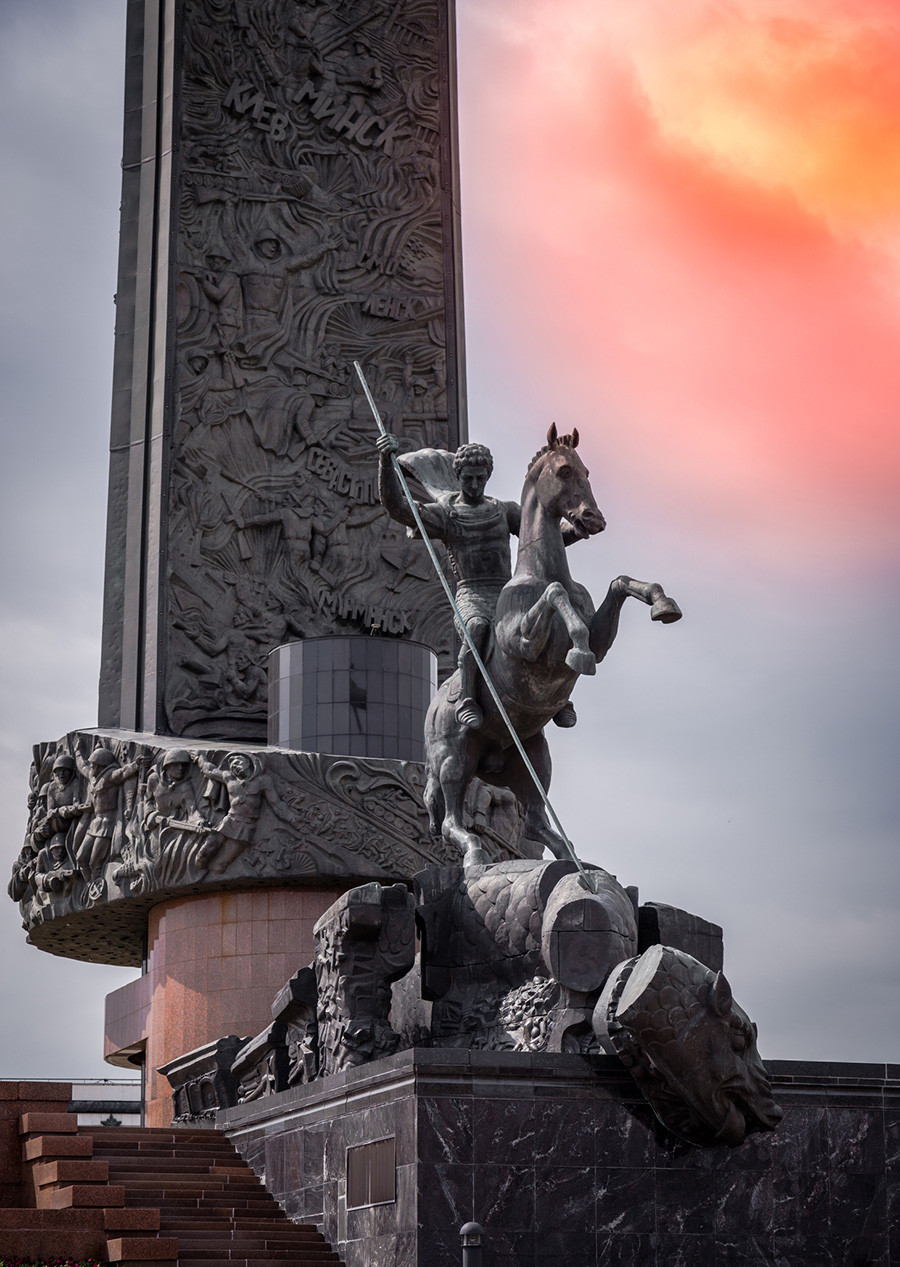 Closer to the top comes a sculpture of Nike, the iconic Greek goddess of victory. With a golden laurel wreath in one hand and two little angels blowing golden trumpets on either side, it reportedly weighs around 25 tons in total. 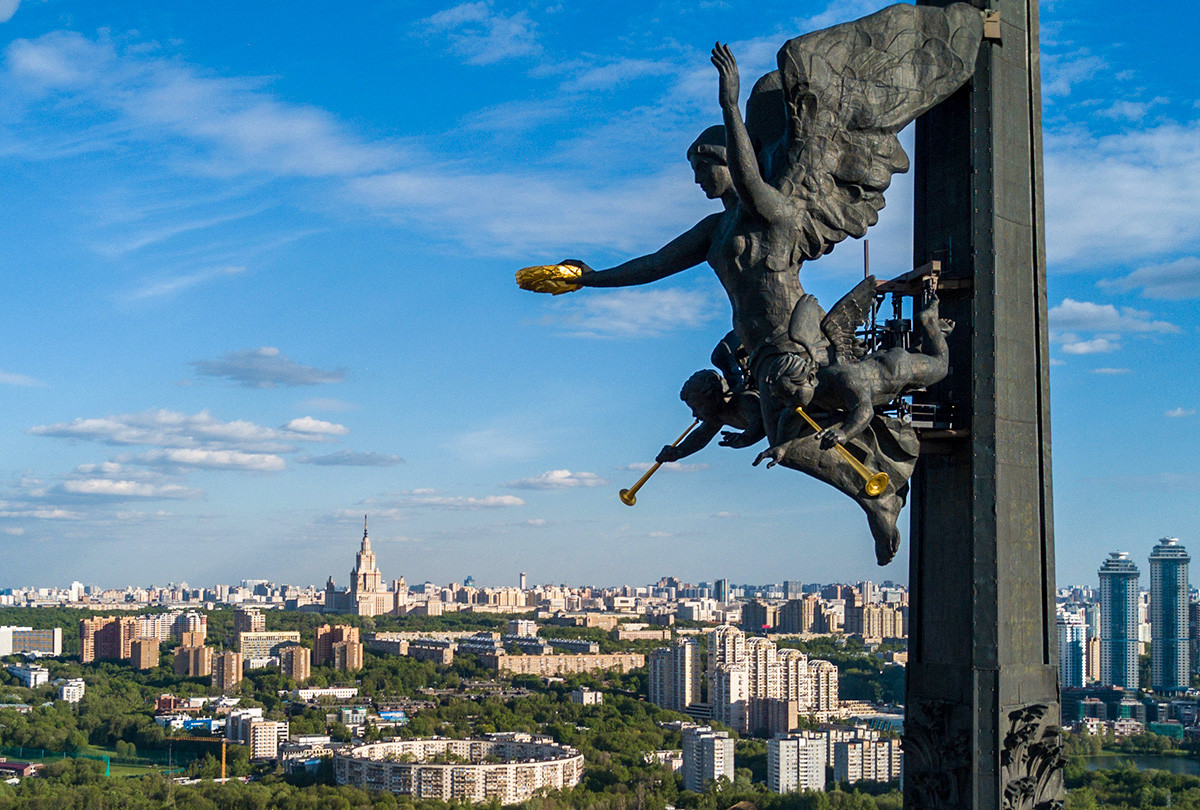 It turns out, of course, there’s more to the monument than meets the eye. The supporting part of the obelisk - only 8 meters high - goes 3.7 meters underground, where it is attached to a concrete slab with a diameter of about 40 meters. There is an elevator inside the obelisk, which rises 87 meters twice a week for technicians for maintenance and check ups.

The Victory Monument is the brainchild of Georgian-born sculptor Zurab Tsereteli, whose works can be found in numerous locations around the world, including the ‘Tear of Grief’ in New Jersey gifted to the U.S. by Russia, which is dedicated to the victims of the 9/11 terrorist attacks.

Tsereteli’s Victory Monument was opened to the public in Moscow back in 1995, to mark the 50th anniversary of the end of WWII.

2. The Monument to the Conquerors of Space

You literally can’t miss it! It holds the title of the second tallest monument in Russia. The impressive structure, located outside the main entry to the VDNKh (a giant amusement park and permanent general purpose trade show in Moscow) measures in at 107 meters. 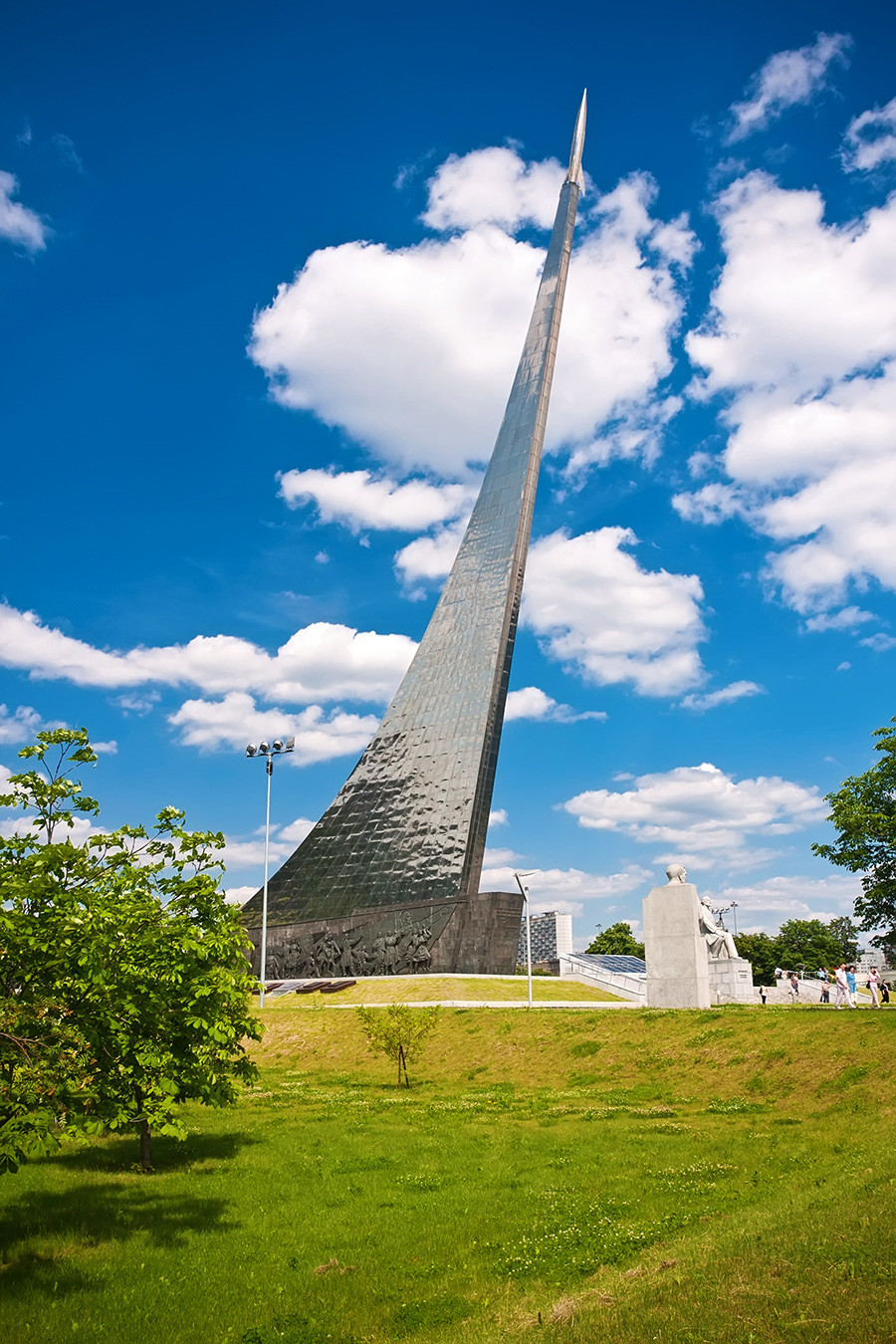 The monument was built back in 1964 to pay tribute to the unparalleled Soviet contribution to space exploration. Despite its colossal size, the Monument to the Conquerors of Space (designed by sculptor Andrei Faidysh-Krandievsky and architects Mikhail Barshch and Aleksandr Kolchin) is devoid of visual massiveness. Solved in the style of Soviet modernism, it depicts a flying rocket standing at a 77-degree decline. The scale of the monument speaks for itself, depicting the vapor trail behind the rocket. 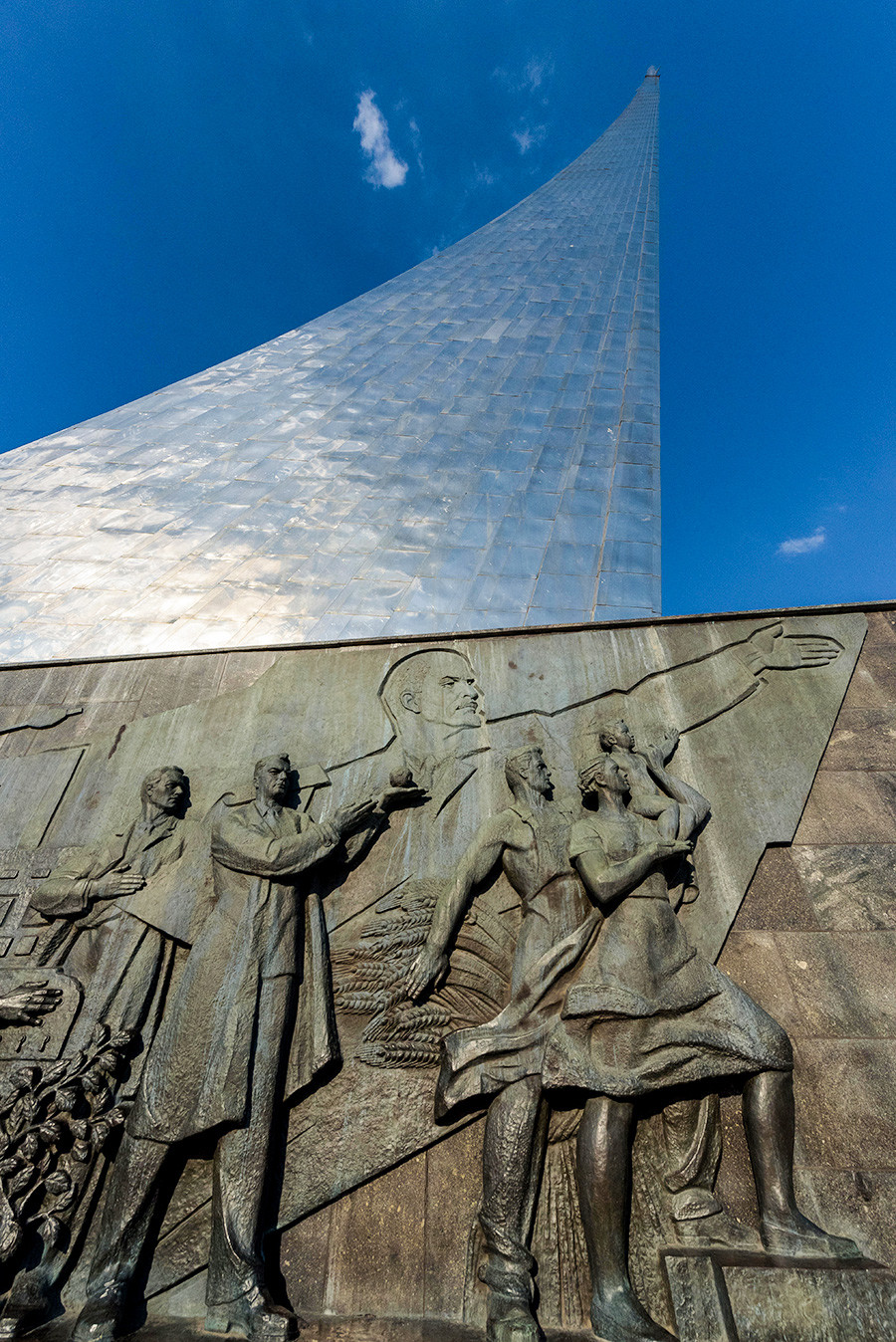 The 250-ton steel structure was assembled by hand on the ground and then lifted by cranes into place. It’s best to view the giant structure from different angles to fully appreciate its grandeur. Last, but not least, the base of the monument is home to the Museum of Cosmonautics.

You won’t have any trouble spotting this quirky monument. Standing at an impressive 98 meters (321 feet), it’s taller than the world-famous Statue of Liberty in America. 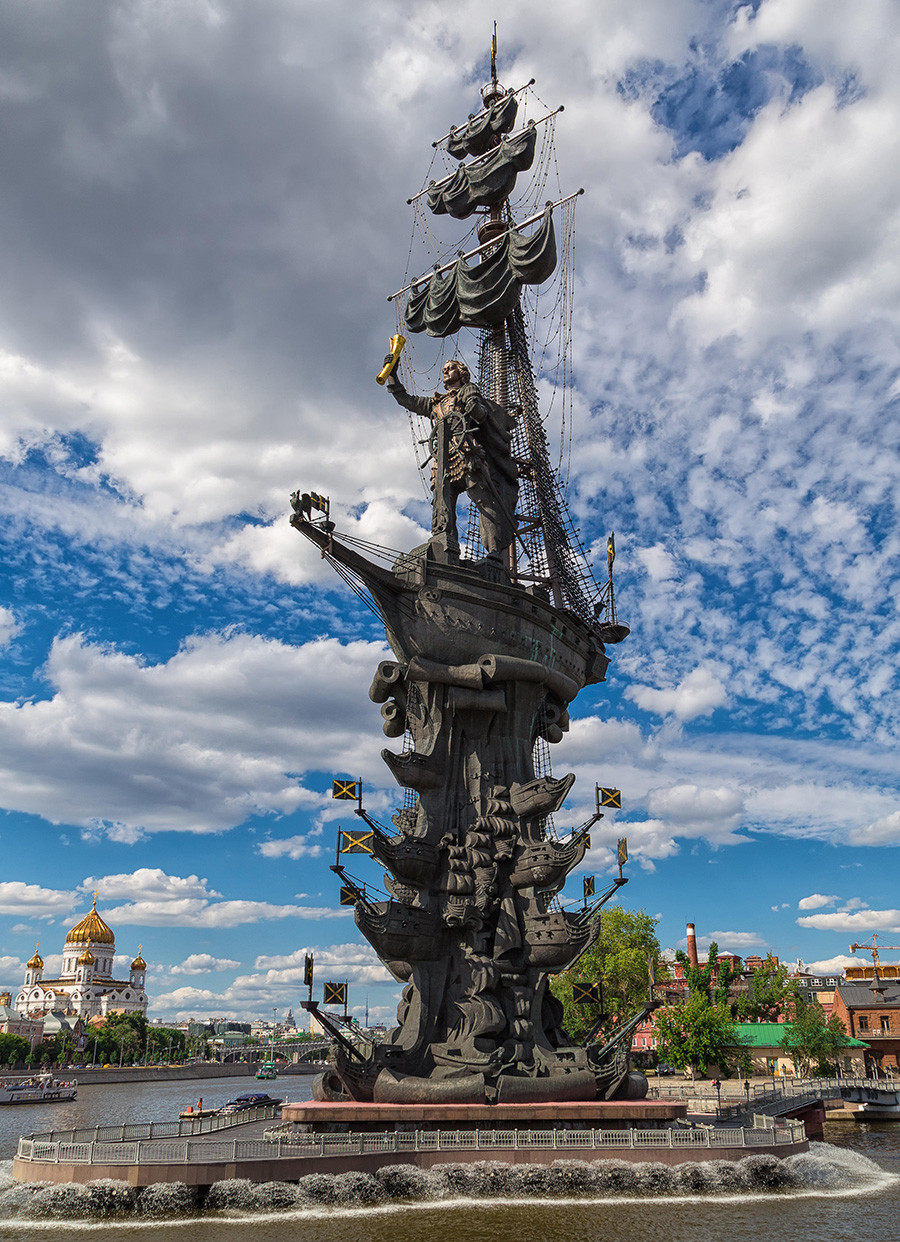 The gigantic monument featuring Tsar Peter I of Russia at the helm of a ship was erected in 1997, causing great controversy. The behemoth monument, created by the prolific Zurab Tsereteli, sits in the Moskva River, at the tip of an artificial island. 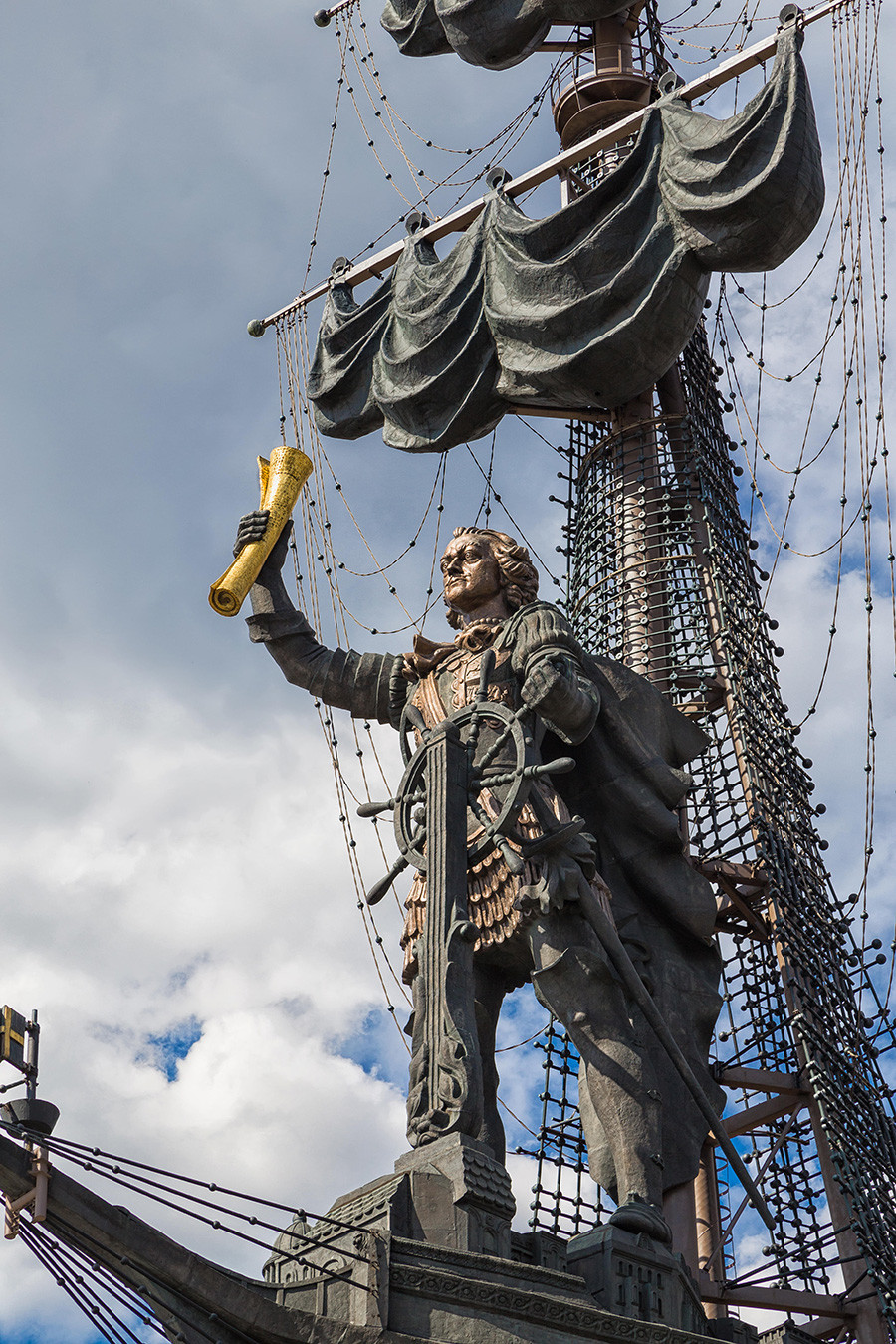 Critics wondered, among other things, why the monument to Peter the Great, who created the Russian Navy, was erected in Moscow when the tsar famously moved the capital of Russia from his least favorite city to St. Petersburg back in 1712? 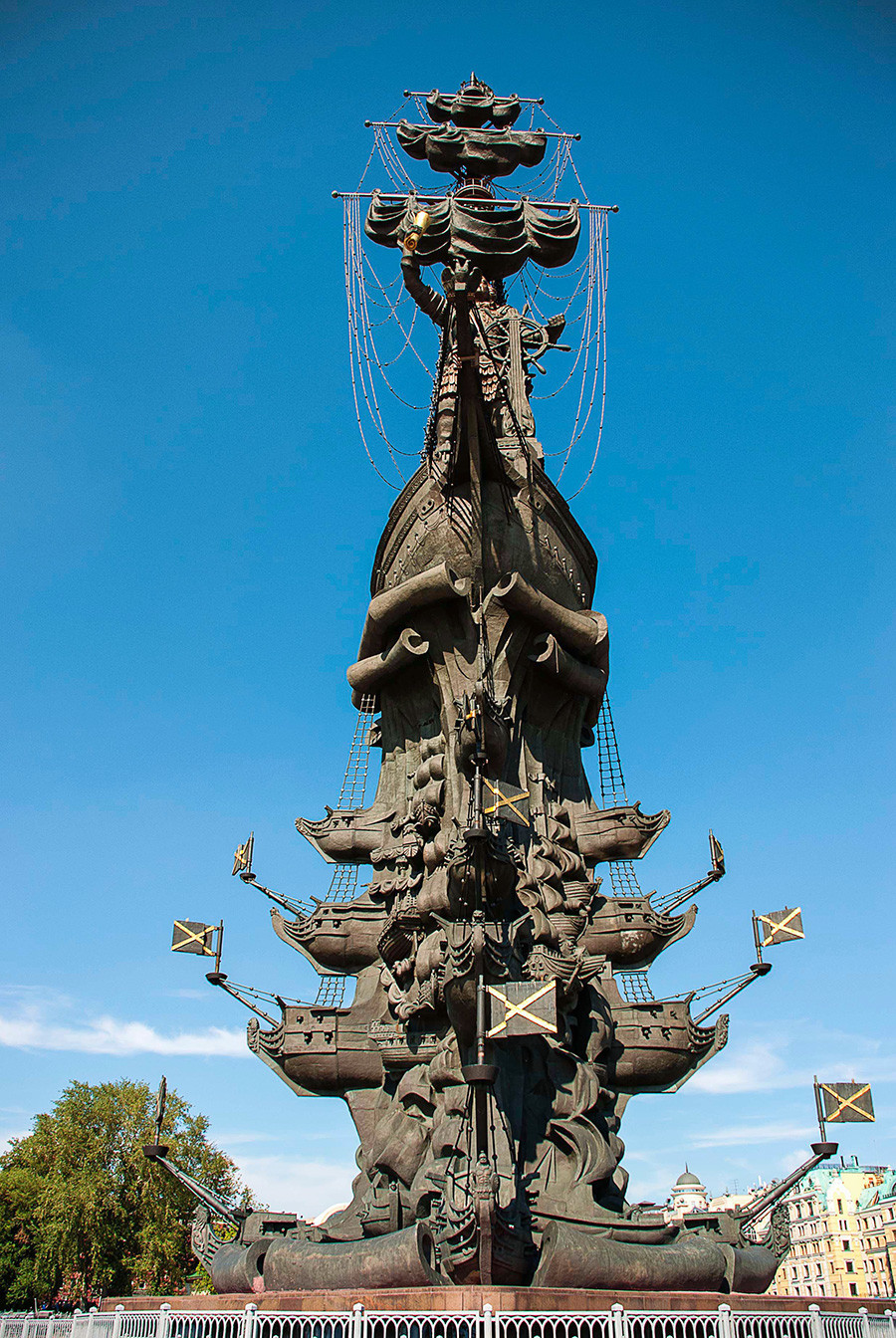 Nonetheless, the scale of the statue speaks volumes about Peter the Great (1672–1725), who had a reputation as one of the tallest rulers in Russian history. The monument weighs over 2,000 tons and consists of three parts: a pedestal (the lower part of the monument), a ship and the figure of Peter the Great.

4. The Worker and Kolkhoz Woman

Vera Mukhina’s stainless steel brainchild is her response to social realism, meant to symbolize an ideal symbiosis between the working class and peasantry. 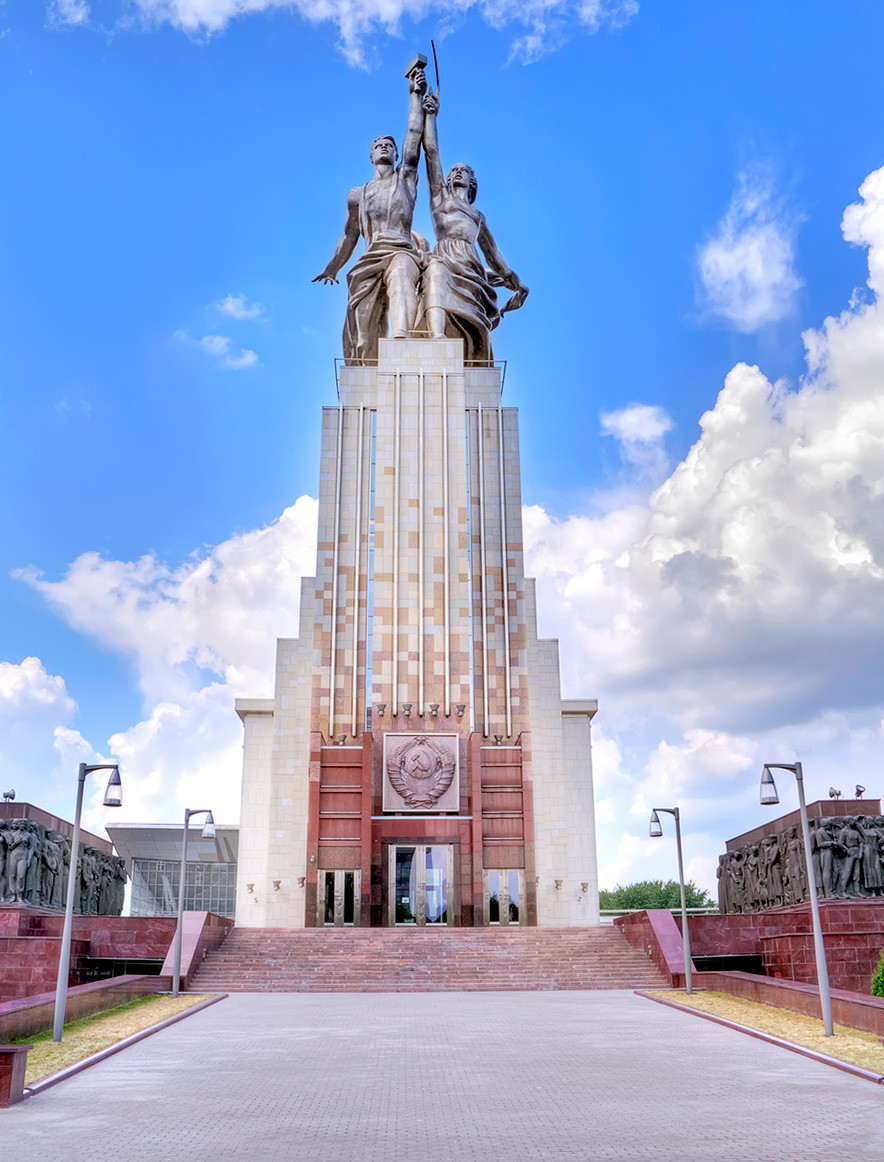 This quintessential Soviet monument reaches 58 meters (190 feet) and was actually built for the 1937 World Fair in Paris. 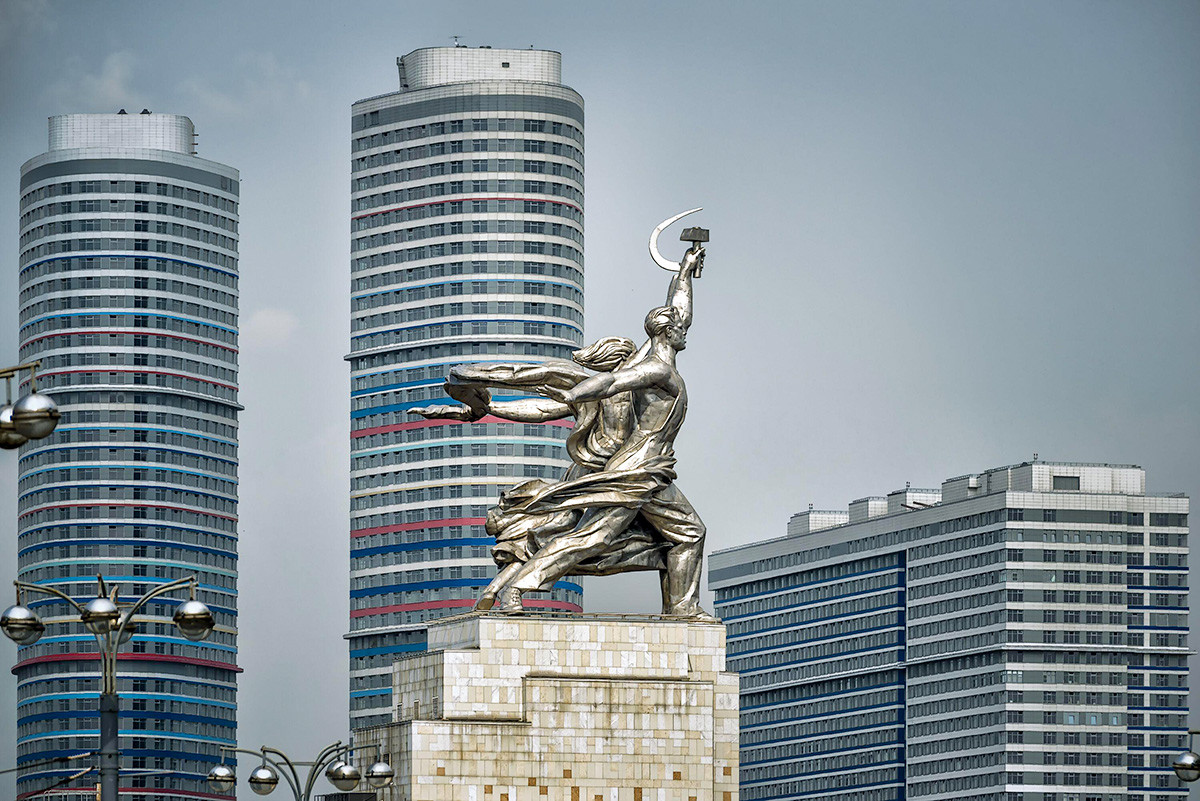 In a prophetic twist of fate, the Soviet and the German pavilions found themselves placed opposite one another in the heart of the French capital, at the Trocadéro. 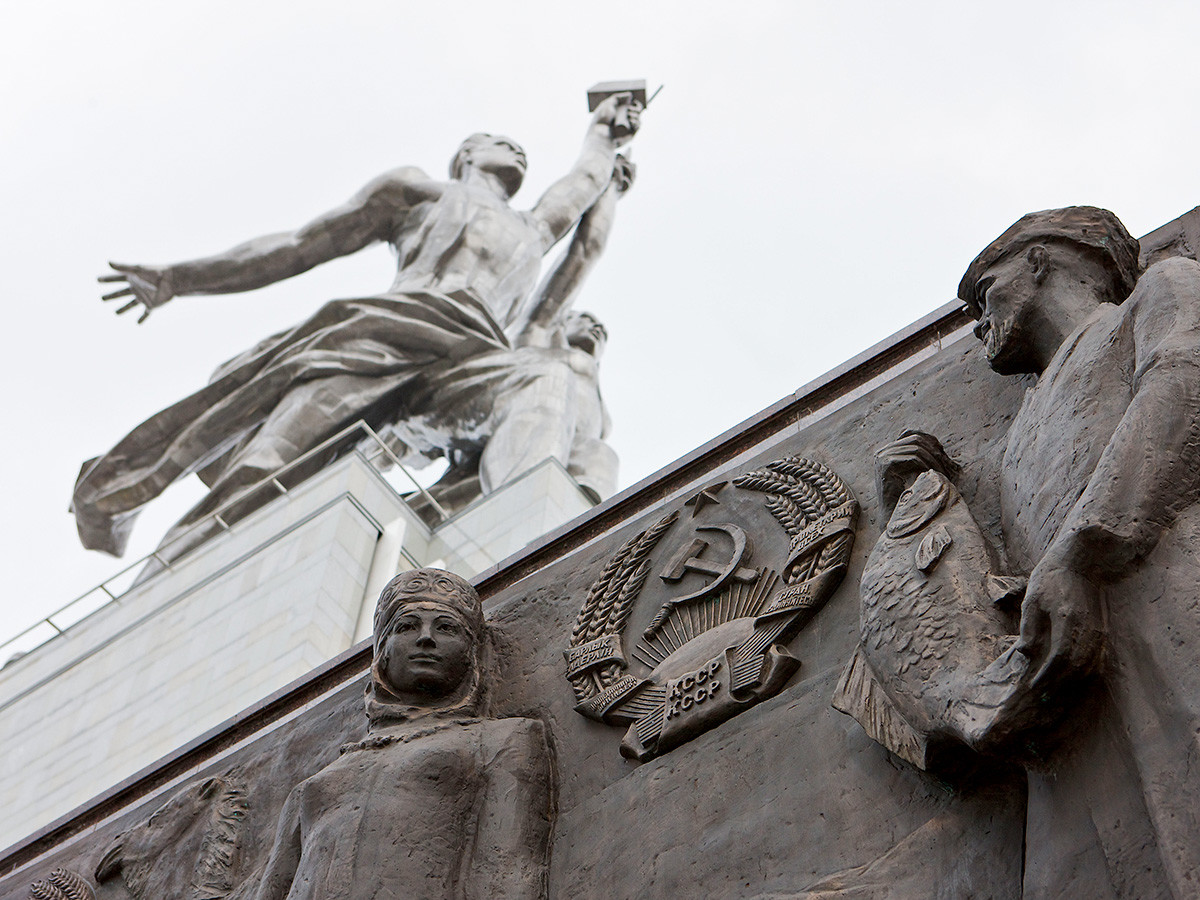 After the fair, the Worker and Kolkhoz Woman sculpture was relocated to Moscow, where it was placed outside the VDNKh park entrance, becoming a magnet for tourists and locals.

The statue dedicated to one of the most iconic cosmonauts in world history is made from titanium used in the construction of spaceships. 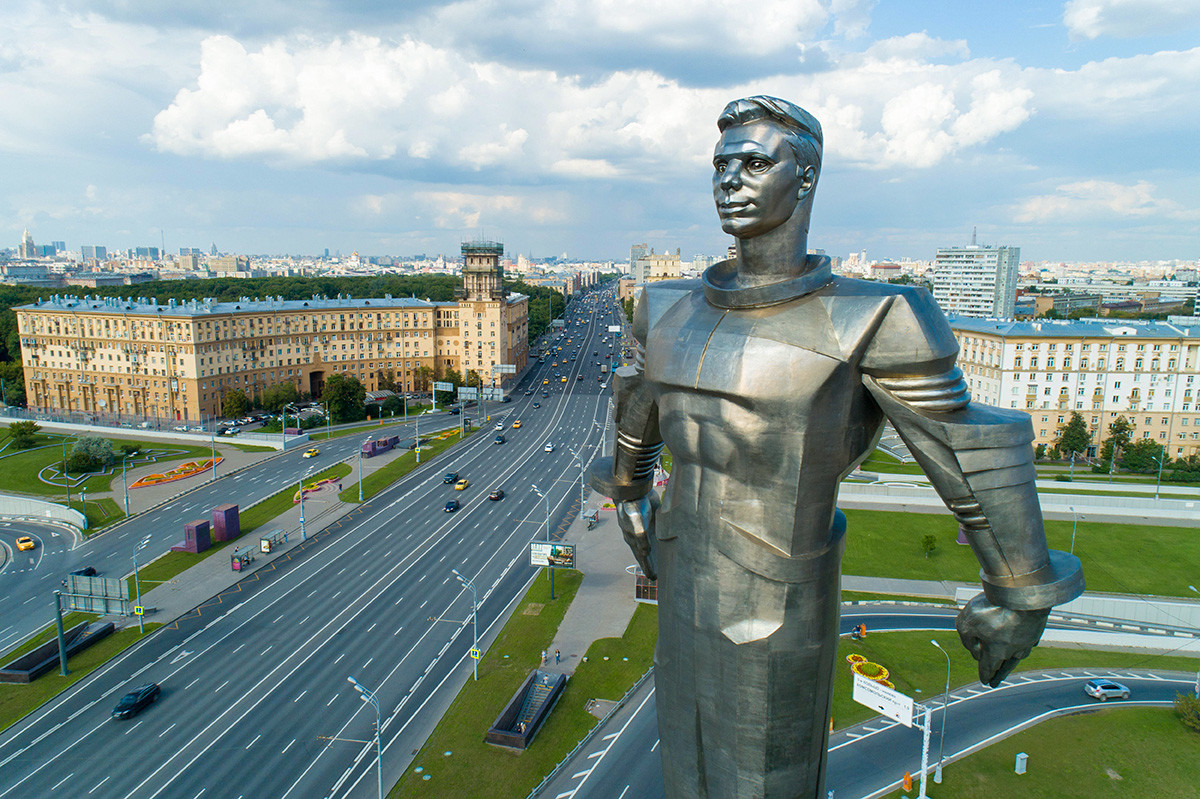 Yuri Gagarin’s monument, erected in July 1980, is 42.5 meters (139 feet) tall. It celebrates what the legendary Soviet cosmonaut was praised for – confidence, energy and audacity. It stands tall in the middle of a square and one gets the impression that Yuri Gagarin is literally rising into the sky. 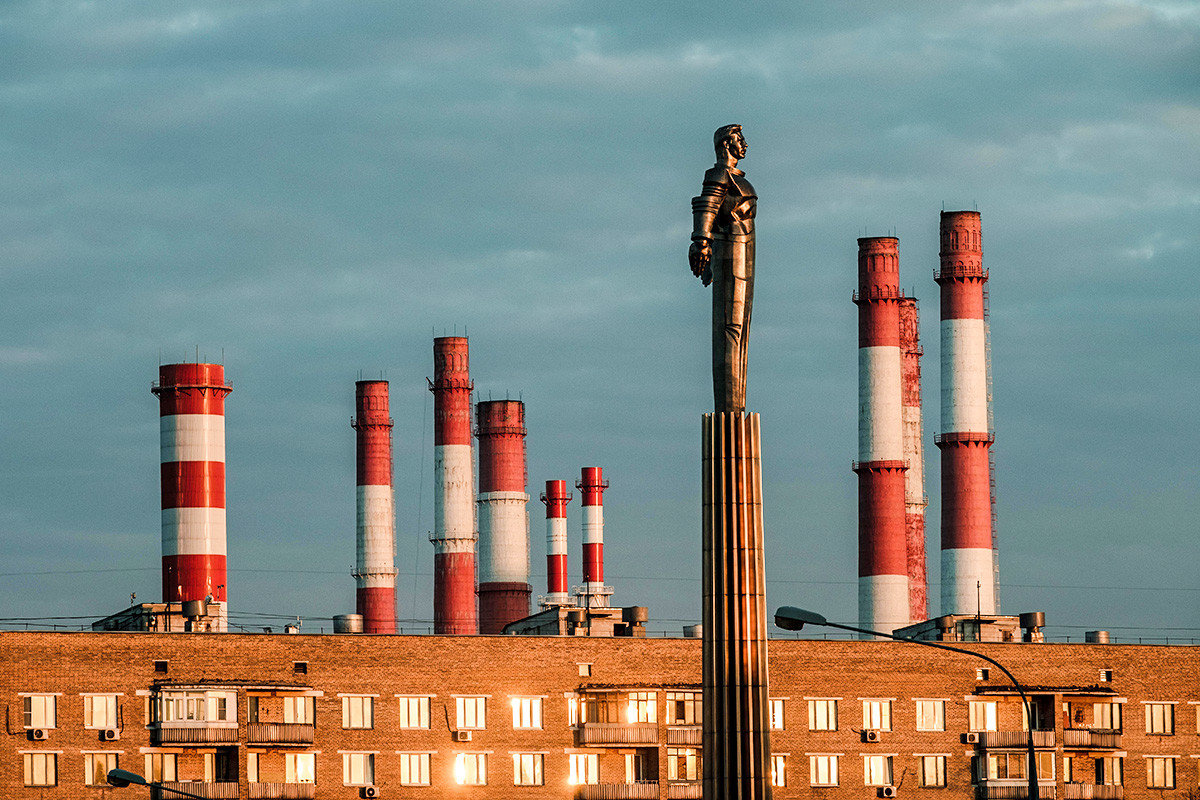 The towering monument can be seen from miles away. The figure of the legendary Soviet cosmonaut consists of 239 blocks, bolted together with titanium alloy. At the base of the statue is a replica of the Vostok capsule. 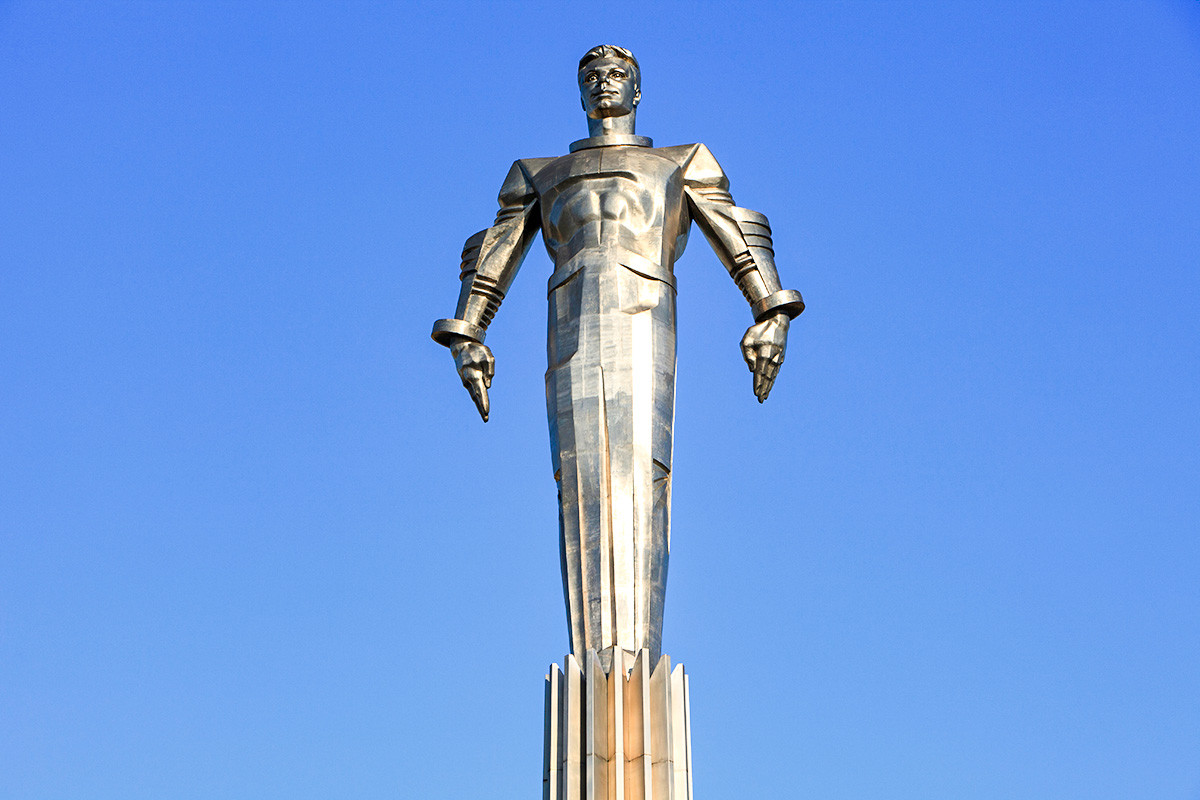 The man with the lady-killer smile became a hero to millions when he blasted off Earth into space and orbited the planet on 12 April, 1961. It’s not a coincidence that the monument, created by sculptor Pavel Bondarenko, was erected on Leninsky Avenue. In 1961, Gagarin traveled back from Vnukovo airport along this major avenue to deliver his long-awaited report on the first flight into space.