Traces of WWII: Places in Moscow that still carry the scars of war 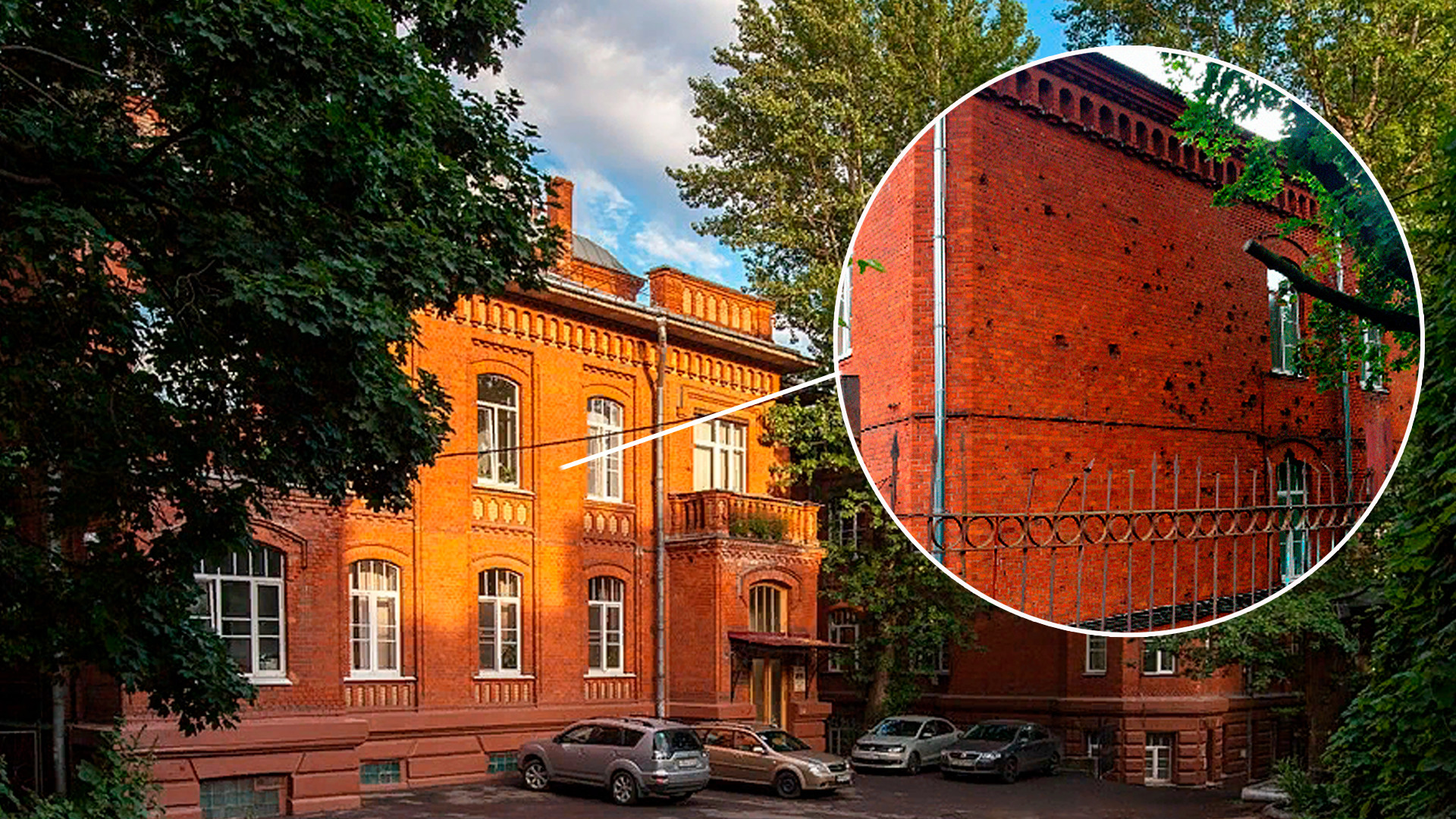 Two houses numbered 10/1 and 10/2 on Mokhovaya Street seem to be a complex of two same-styled buildings of equal height. One of them looks to be full-size (10/1), while the second is smaller: its front only fits three windows (10/2). Actually, these are parts of one residential building constructed in 1892. In August 1941, it was hit by a bomb that fell through all four floors, exploded near the cellar (which was being used as a bomb shelter) and ruined a part of the house. The fallen fragments also caught fire. The rest of the building stood firm, despite the damage, so the decision was made to keep it. 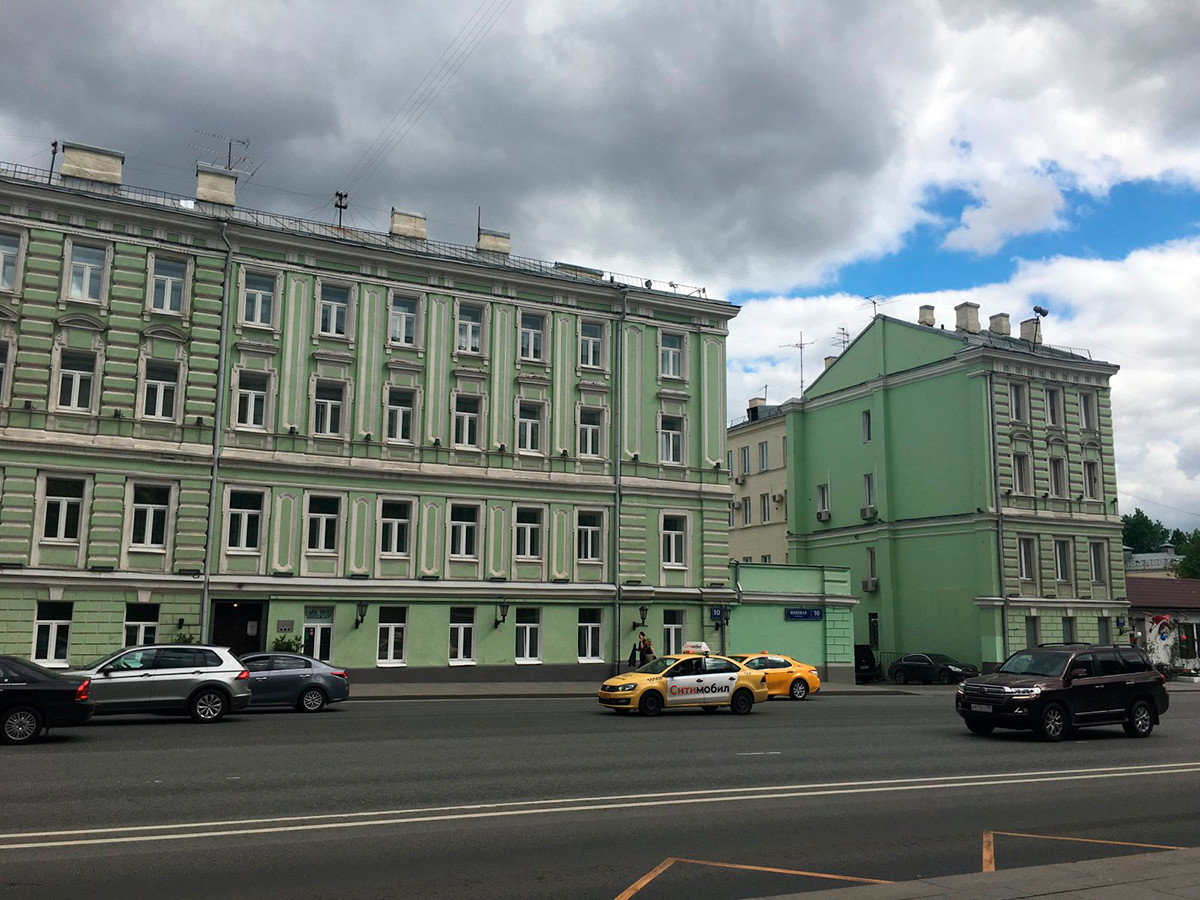 The inhabitants of the house weren’t moved to another building (there actually wasn’t a place to move them to at the time) and, after renovations, it turned into two houses that reveal the Kremlin through the gap between them. 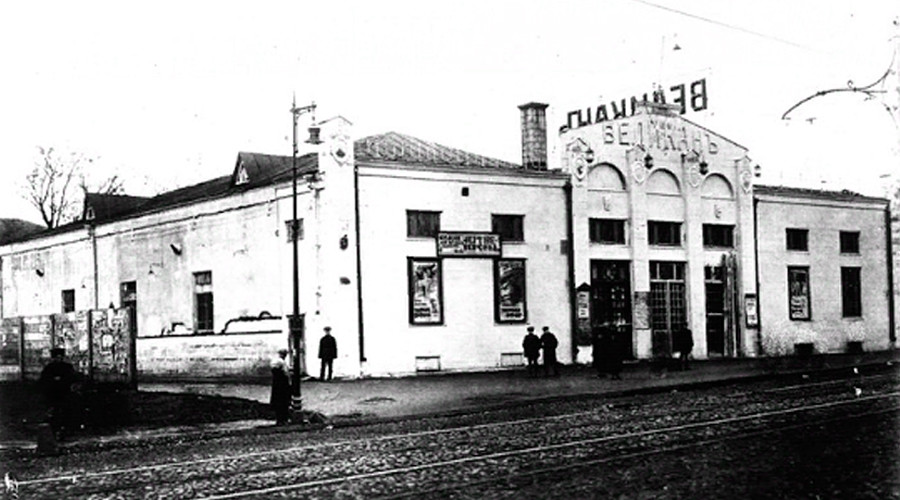 The building at the entrance to Gorky Park from Krymsky Val Street appeared at the end of the 19th century as a shipbuilding plant section. In 1923, architect Alexey Shchusev turned it into a beautiful exhibition hall and, in 1933, it was reconstructed into a cinema called ‘Velikan’ (“Giant”). It was one of the first sound cinemas in Moscow. ‘Velikan’ functioned until 1942. That year, a bomb hit the middle part of the building. That part was ruined, but the right and left side wings survived the explosion. The destroyed part was never reconstructed - the central facade hides an empty spot with no roof. 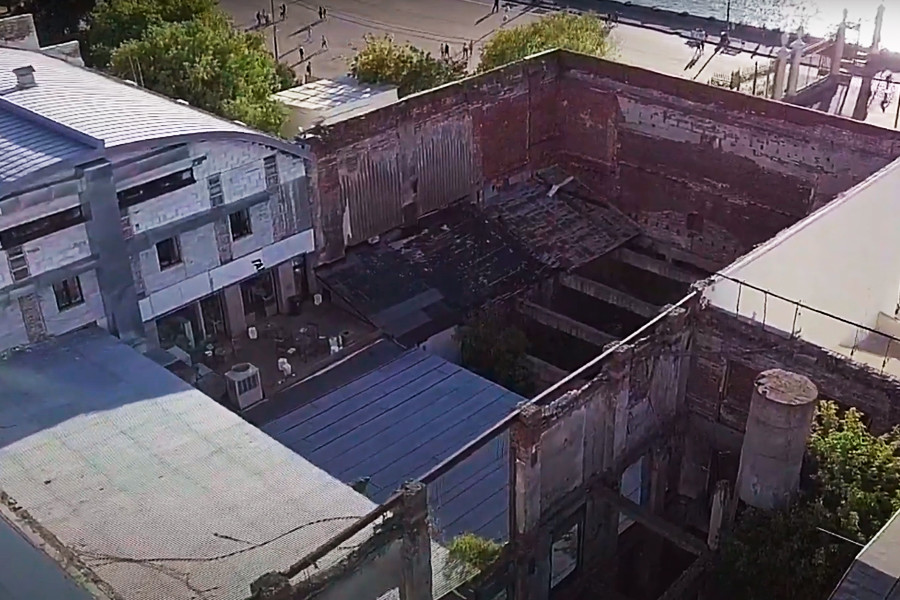 Nowadays, the wings are occupied by the Gorky Park and ‘Garazh’ (“Garage”) contemporary art museum. In 2016, a reconstruction project appeared and, in 2019, it was finally approved. It was expected the building would keep its appearance and revive the cinema, but it’s still in the project phase. 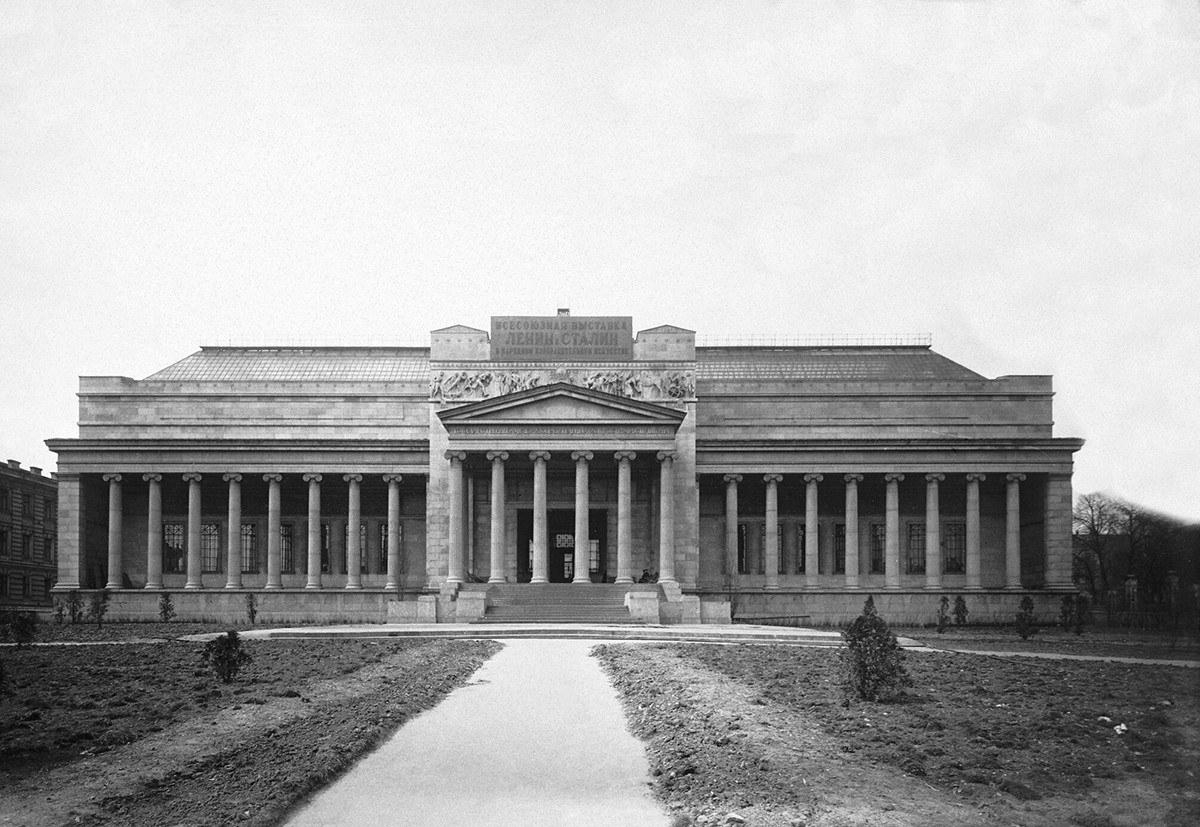 The Pushkin Museum at Volkhonka Street, 12, wasn’t open during the years of war. Its most precious exhibit items were evacuated to Siberia, while the Museum itself went through hard times. In August 1941, about 150 incendiary bombs fell on its territory. They caused a fire on the second floor. At the time, Moscow was being severely bombed and there weren’t enough professional firefighters, so the Museum workers had to deal with the fire themselves. They didn’t succeed in saving the ‘Afinskoye Kladbishche’ (“A Cemetery in Athens”) decorative panel by Alexander Golovin, who had painted it especially for the Museum. 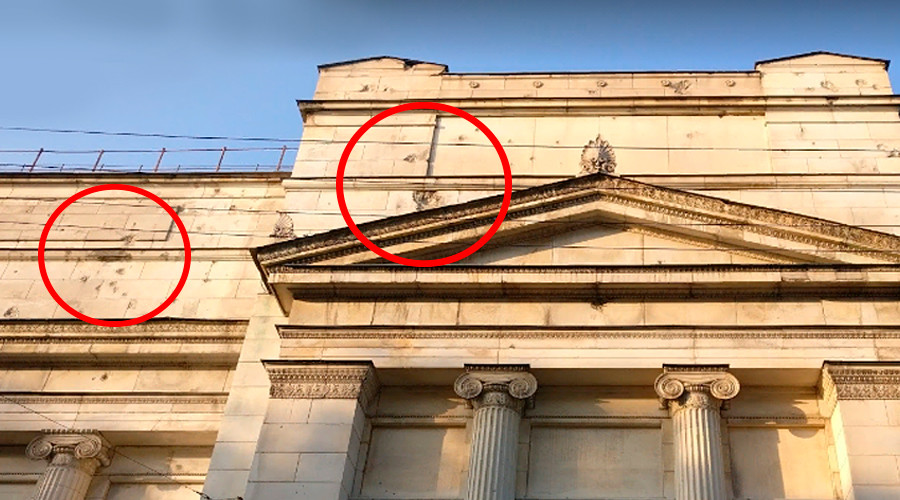 The craters on the wall.

In October, a bomb fell on the territory of the manor of the Golitsyn princes. It’s situated next to the Pushkin Museum, so the explosion wave smashed its glass roof that had only been reconstructed in 1944. Because of this, the building was full of snow in winter. Nowadays, a lot of craters on the top of the Museum’s front facade serve as a reminder of the bombs.

4. The Auditorium Building of the MSU 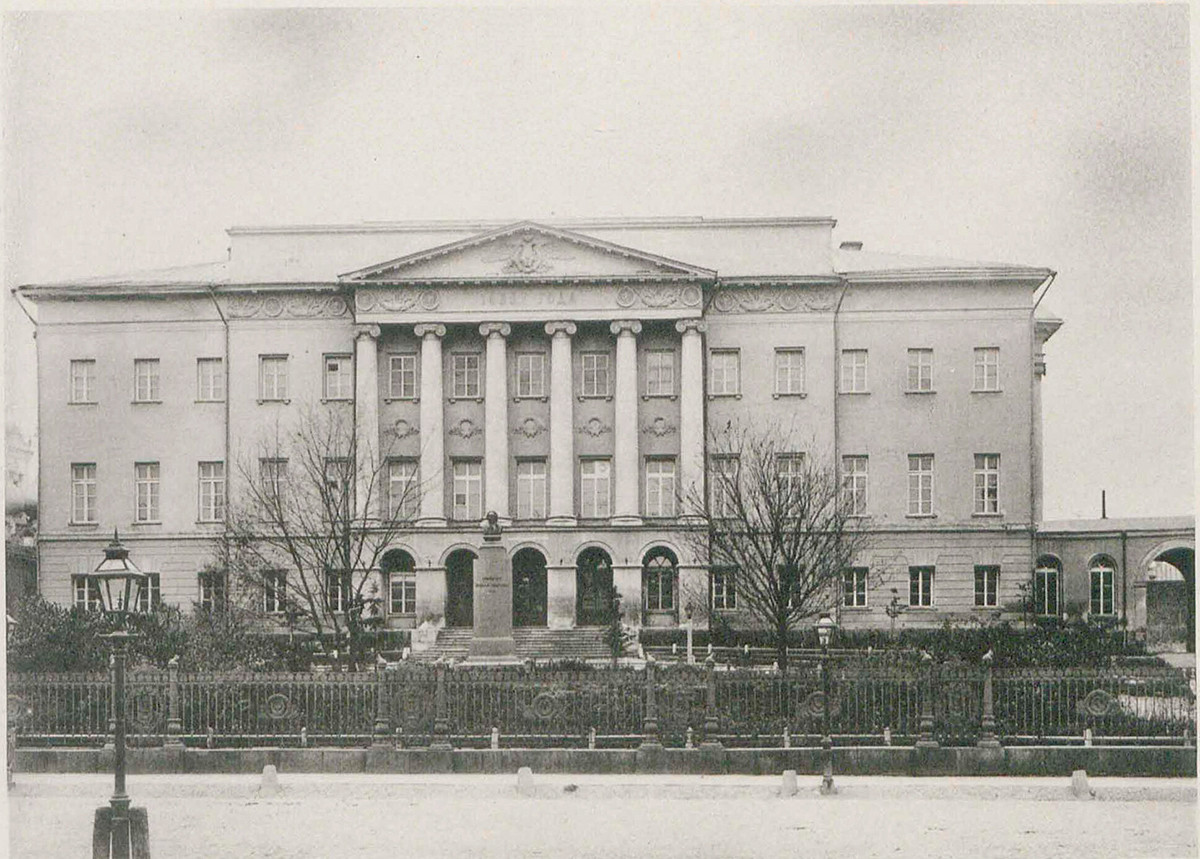 The building of MSU.

The Auditorium Building of the Moscow State University (Mokhovaya Street, 9) was seriously damaged in 1941-1942. On October 29, 1941 a bomb fell near the building that smashed all its doors and windows. The glass dome that appeared during the reconstruction of 1901-1904 was destroyed, too. There was a terrible mess in the scientific library of the University located in the adjacent building: the bookshelves were destroyed, all the books were thrown to the floor and the doors and windows were missing, too. The Empire-styled fence was also bent. 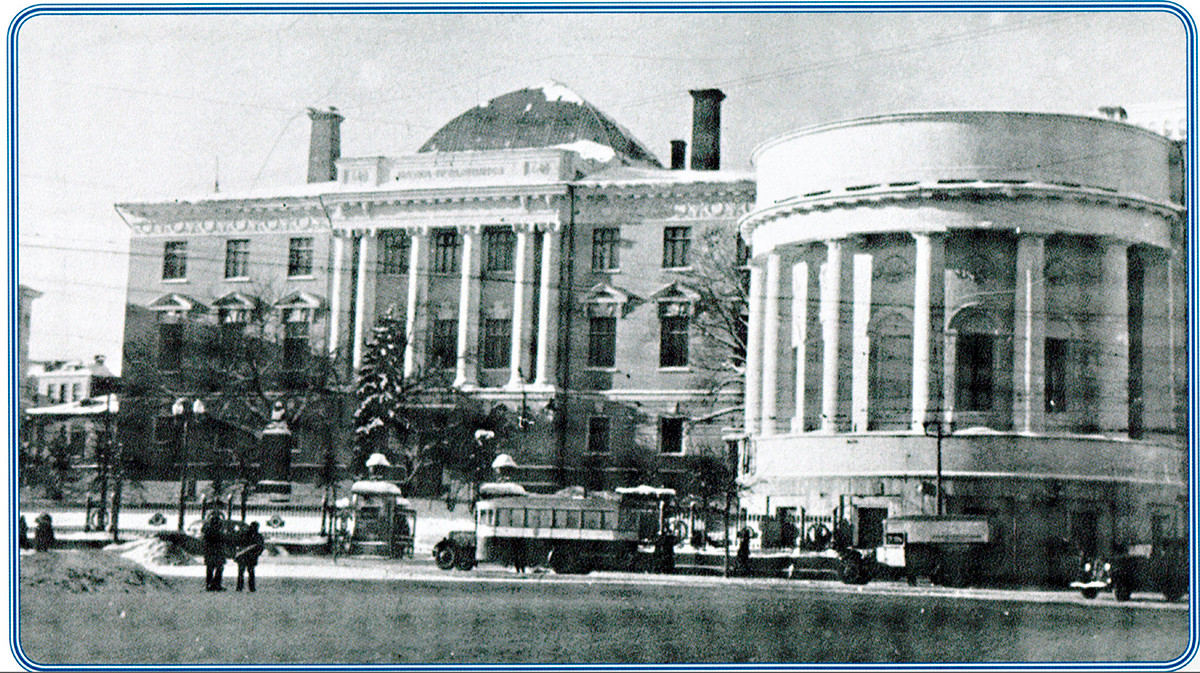 In February 1942, a bomb destroyed its mechanical laboratories with lots of precious equipment. In 1944, the building went through a reconstruction. The Mikhail Lomonosov monument is a reminder of the war: at first, the University’s founder was commemorated with a bronze bust in the yard, but the bomb of 1941 had destroyed its pedestal. In 1944, a temporary sculpture was installed and, in 1957, the final statue appeared that we see today. 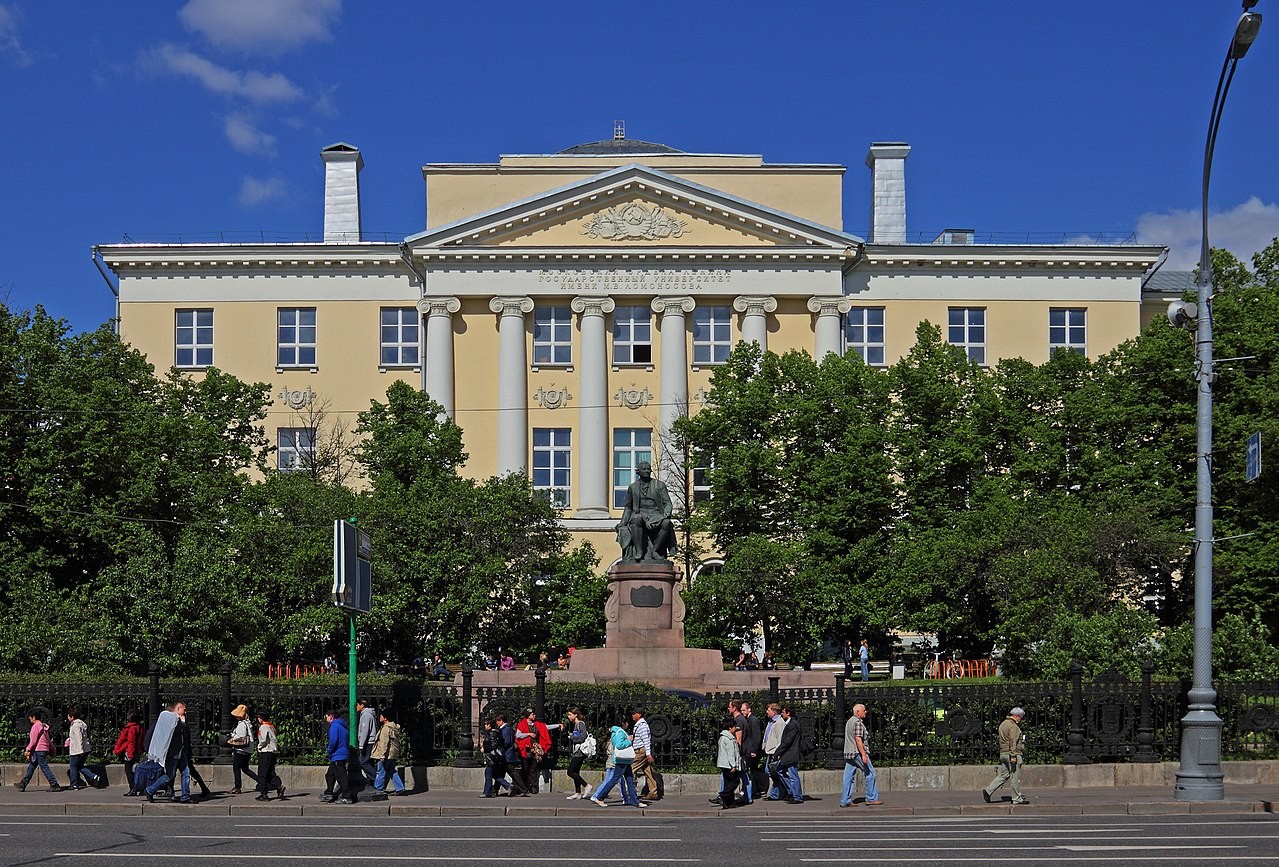 On July 26, 1941, a shot down bomber crashed into an old two-floor building at Dvadtsat Pyatogo Oktyabria Street (now Nikolskaya Street), 6. A massive fire started and the firefighters spent several hours putting it out. The burning house was destroyed, but the brigade saved the surrounding buildings: Nikolskaya Street and its neighborhood is very dense, so the fire could easily have spread. Later, a new building was constructed there, but it didn’t occupy the whole space burnt by the fallen plane. 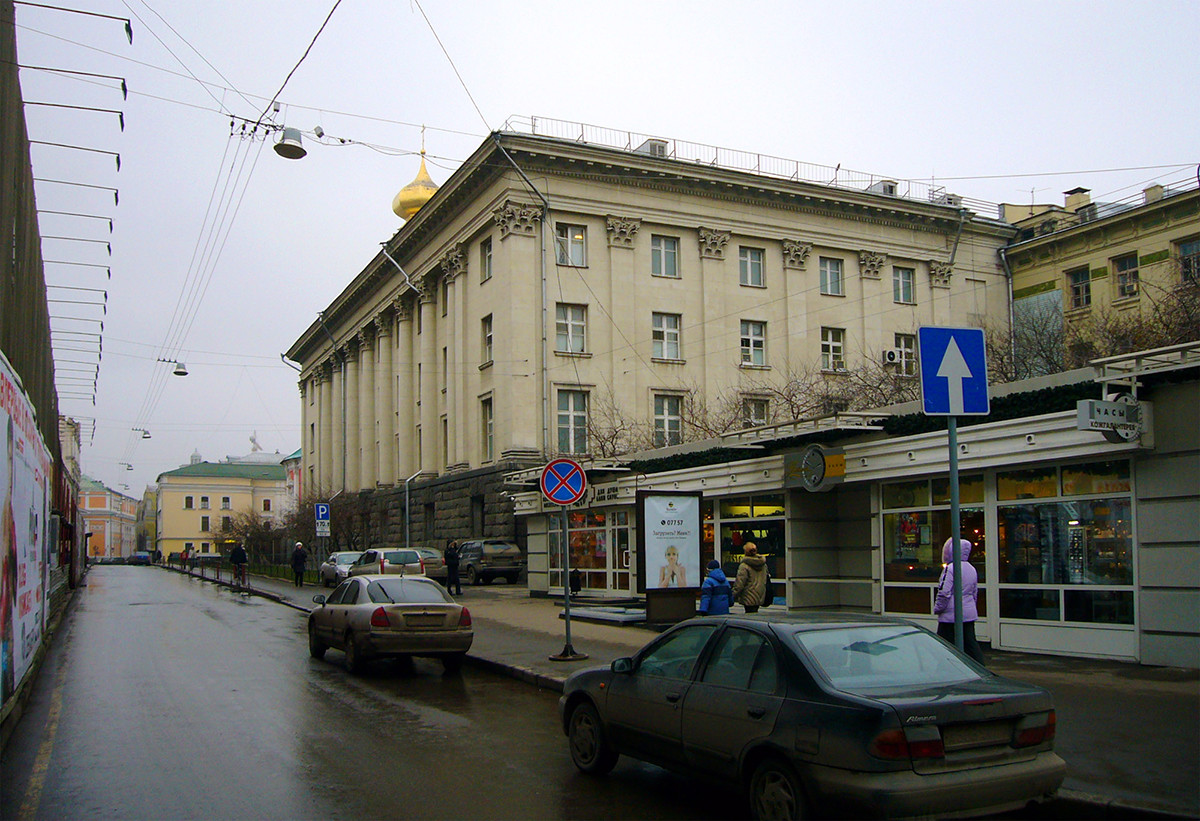 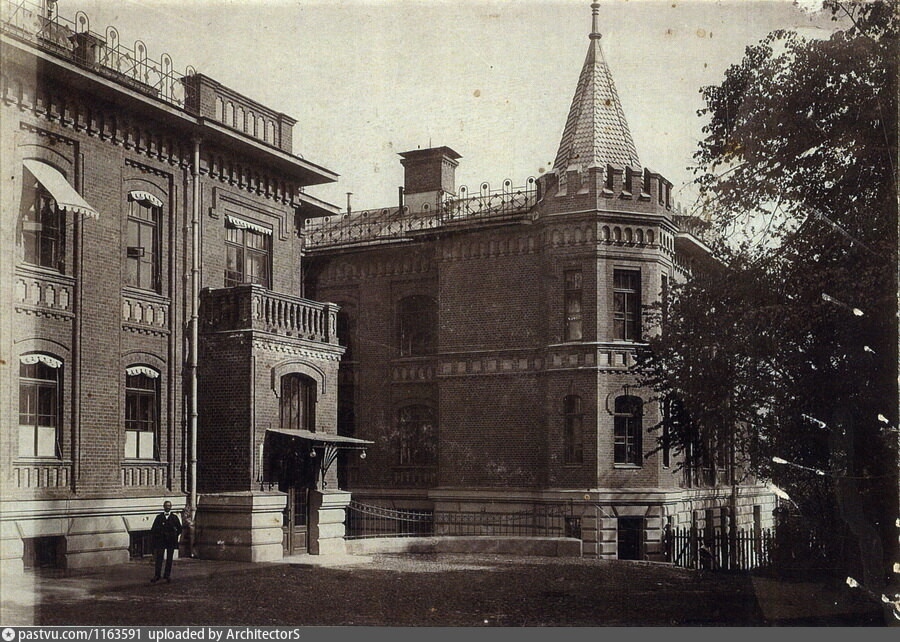 The Evangelical hospital located at Vorontsovo Pole Street, 14, and Obukha Lane, 5, was founded by a Lutheran community at the beginning of the 20th century. It was in full operation during WWII. In 1941, the neighborhood suffered from the bombing of the Moscow Kurskaya railway station. The Evangelical hospital stood less than a kilometer away from the station. A bomb fell near the hospital and its splinters hit the wall facing Vorontsovo Pole Street, 16. They didn’t destroy the thick red brick wall, but covered it with many deep craters that still remain today: the building was never restored, though it’s a beautiful architectural monument. 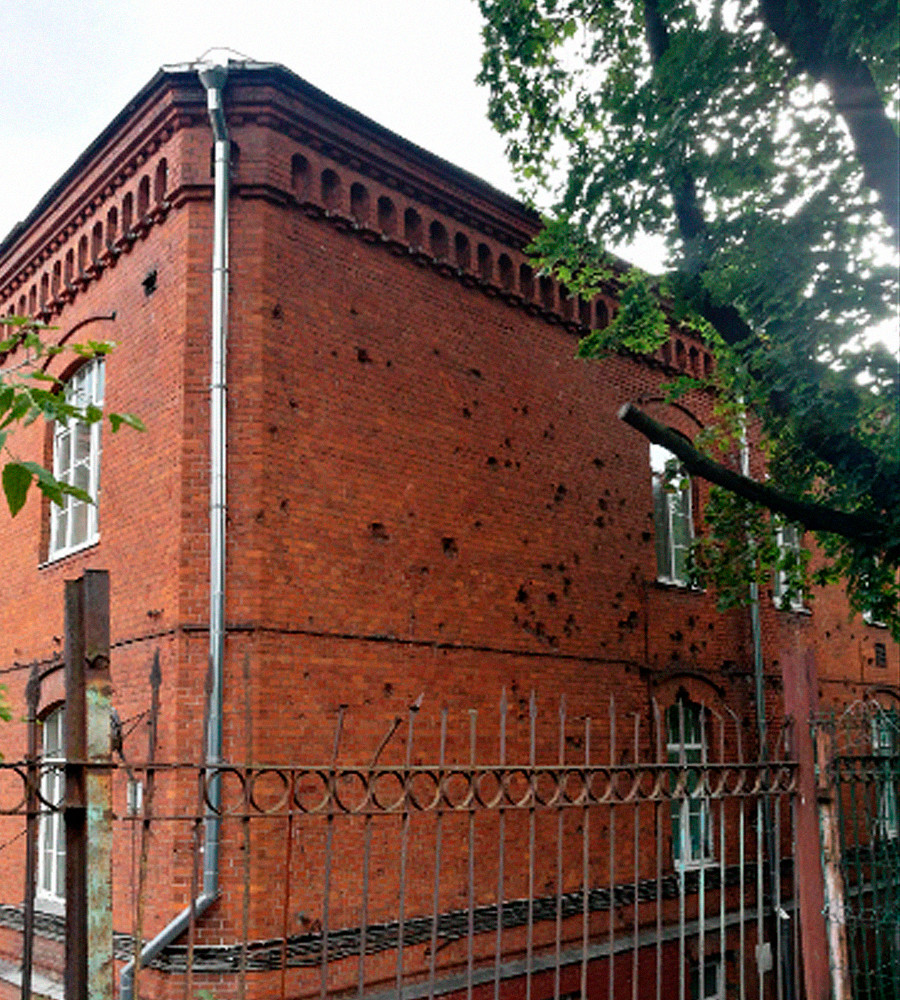 The wall with craters.

The reason, supposedly, is that the hospital still remains there: there is a polyclinic and a neurological research center of the Russian Academy of Medical Sciences. 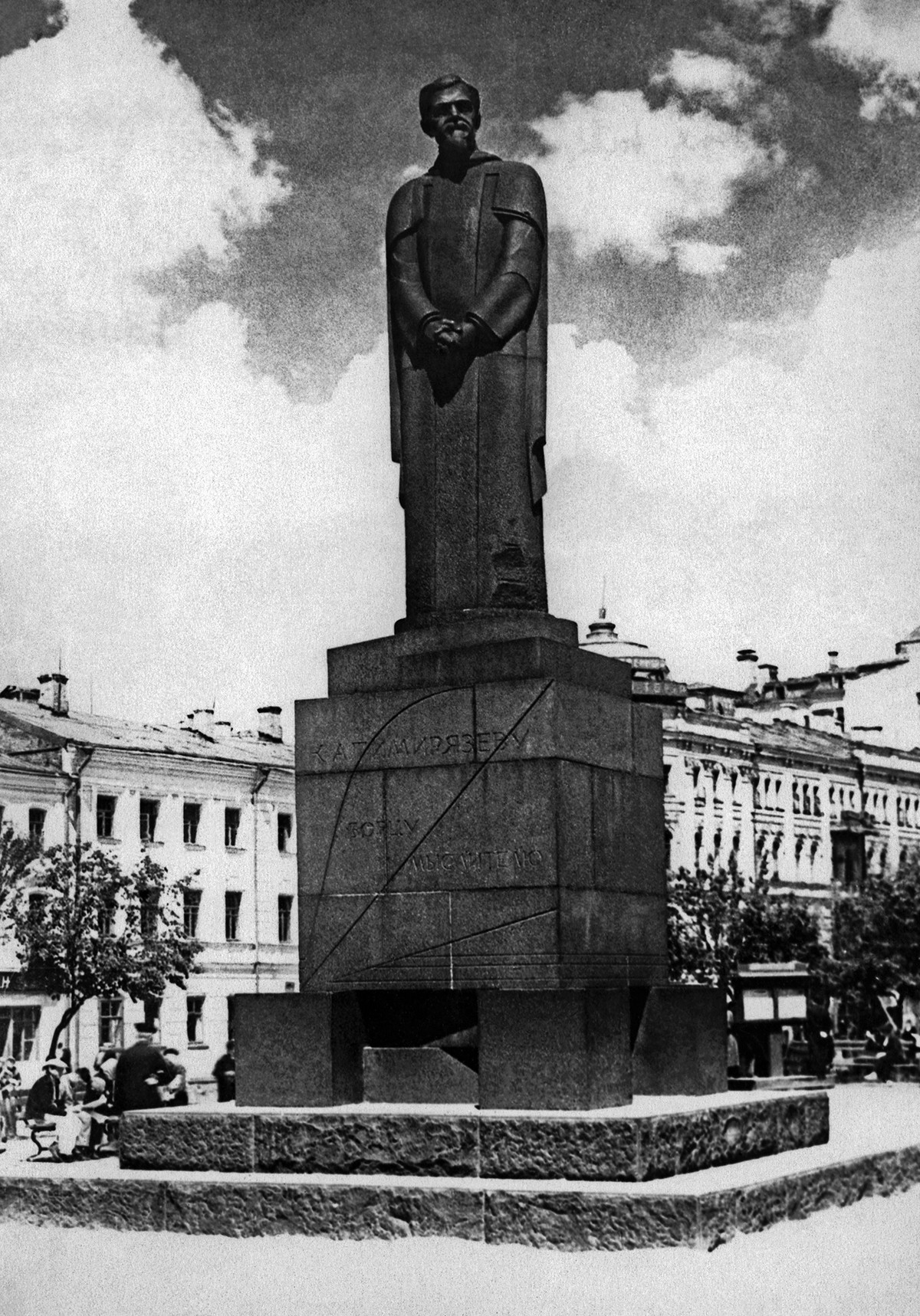 The granite monument to great Russian botanist Kliment Timiryazev was installed at Tverskoy Boulevard near Nikitskie Vorota Square in 1923. On August 5, a bomb exploded nearby. There was an anti-air crew located at Nikitskie Vorota Square - most likely, they were the target. The explosion left a huge crater in the ground, destroyed some tram rails, broke all the windows in the neighborhood and threw the monument of Timiryazev down from its pedestal. The statue cracked into two parts: there is a legend that the head flew through a window of one the closest buildings. But, in reality, it just broke off. The monument was restored very quickly, but it got visible damage. Several craters on the pedestal and on the lower part of the statue’s mantle and a crack on its neck are still noticeable. 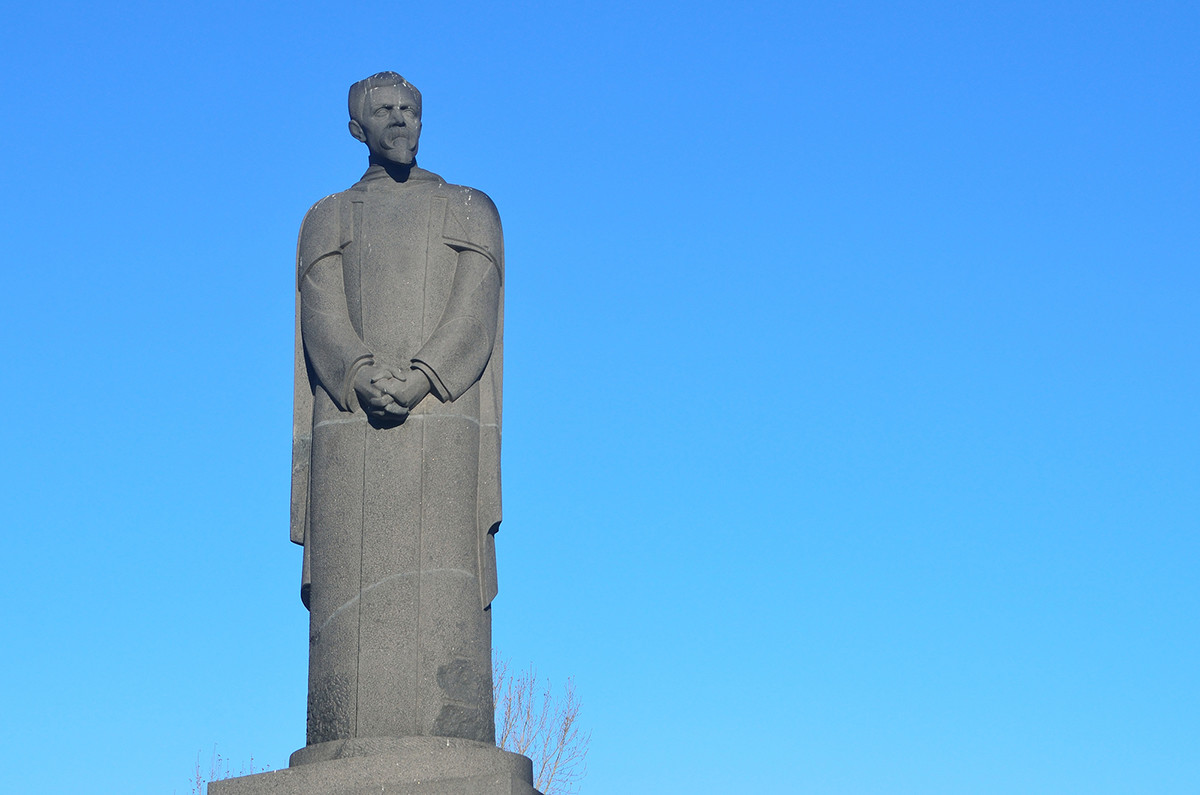 The monument with a crack by the neck.