How sieged Leningrad was camouflaged during WWII 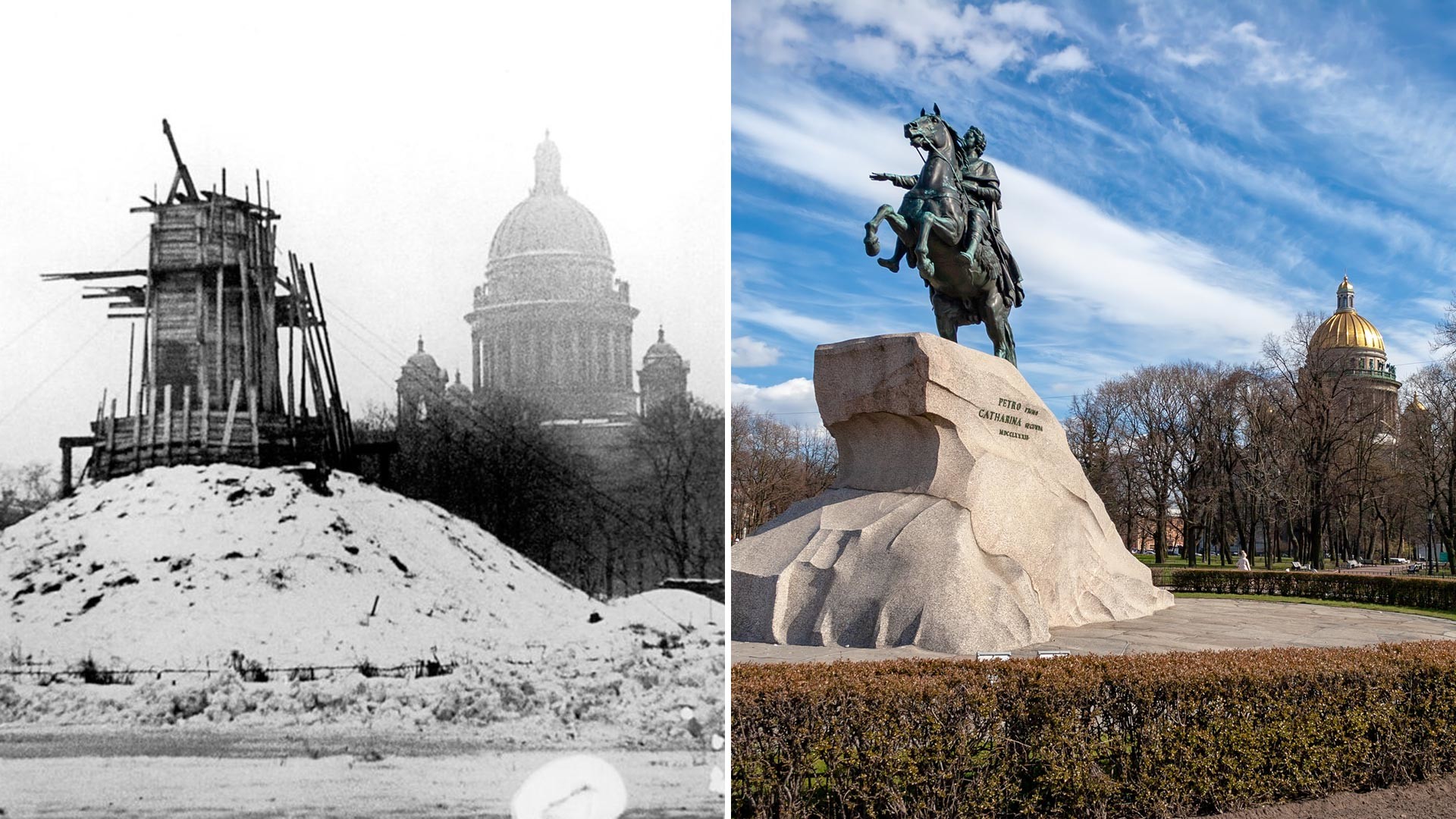 Archive photo; Legion media
The defenders of Leningrad found many means to hide the city from enemy aviation.

The Siege of Leningrad (now St. Petersburg) lasted 872 days from September 8, 1941 to January 27, 1944. German troops were bombing the city heavily, so the residents had to camouflage it quickly. Firstly, all the landmarks were being used as an aiming reference for the enemy’s aviation. Secondly, everything possible had to be done to save the historical monuments and buildings of vital importance in Leningrad from destruction.

The hidden spires and domes 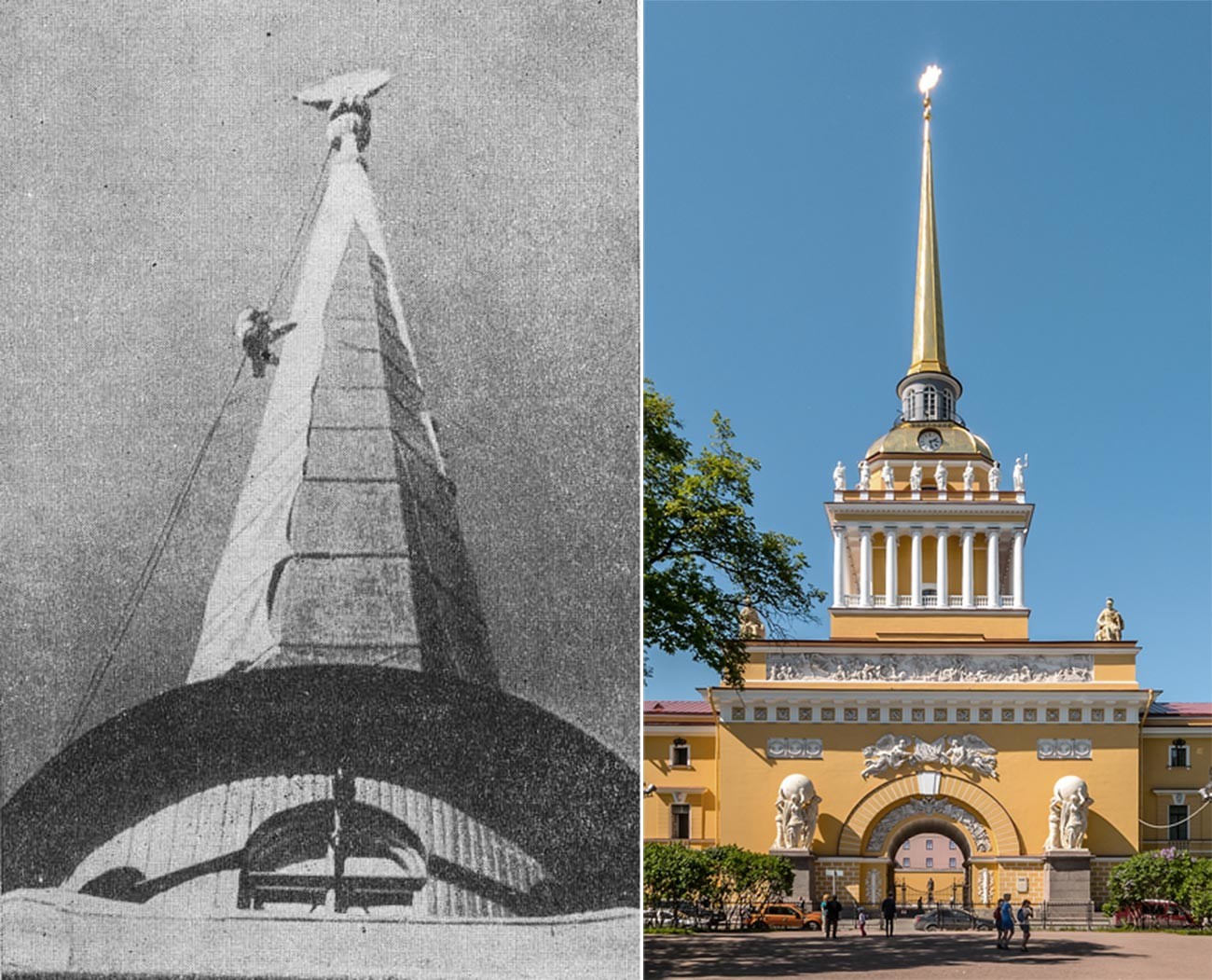 The spire of the Admiralty.

The Admiralty building and a number of cathedrals had golden spires and domes that reflected even on the gloomiest days, so they needed to be camouflaged. Nikolai Baranov, who was the main architect of Leningrad at the time, recalled in his book ‘Siluety Blokady’ (“The Silhouettes of the Siege”): “Some hotheads straight off suggested dismantling the towers, domes and spires.” This idea was rejected immediately. 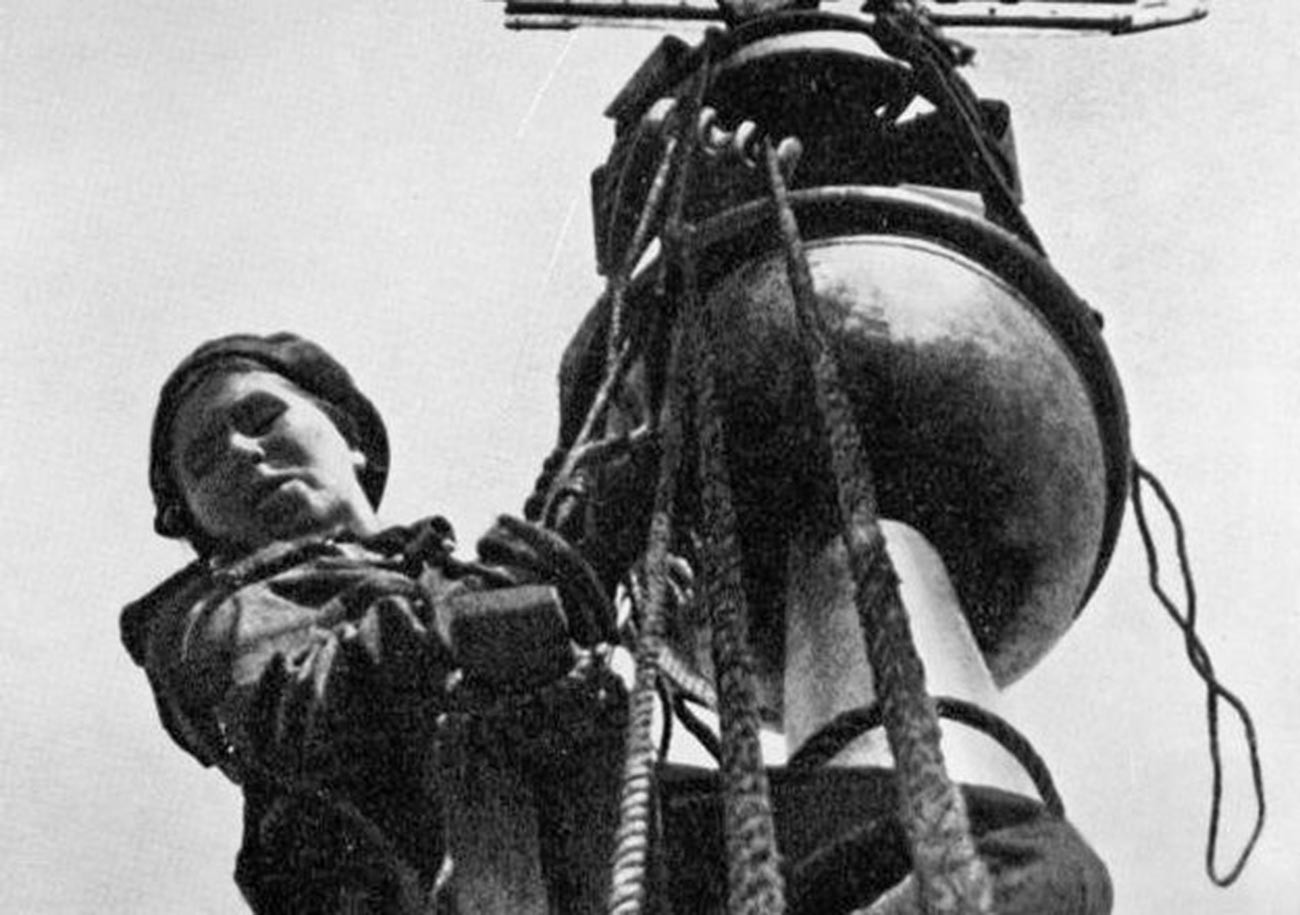 A climber closes the spire of the Admiralty.

Often, gold-plating had been completed with an old technology: very thin layers of gold were attached with special glue. These were covered with cloth. The works started from the Admiralty building spire. The covering was sewn on a night and weighed about a half of a ton. An aerostatic balloon pilot fastened a rope at the top of the spire, and then six climbers wrapped it with the cloth. One of these climbers, Olga Firsova, who actually was a professional musician, remembered later: “The spire camouflage was similar to a woman’s flared skirt, but with a single joint. We had to stitch the edges and tie them round, so the wind didn’t dash the sailcloth.” The same thing was done, for example, with the Nikolsky Naval Cathedral. 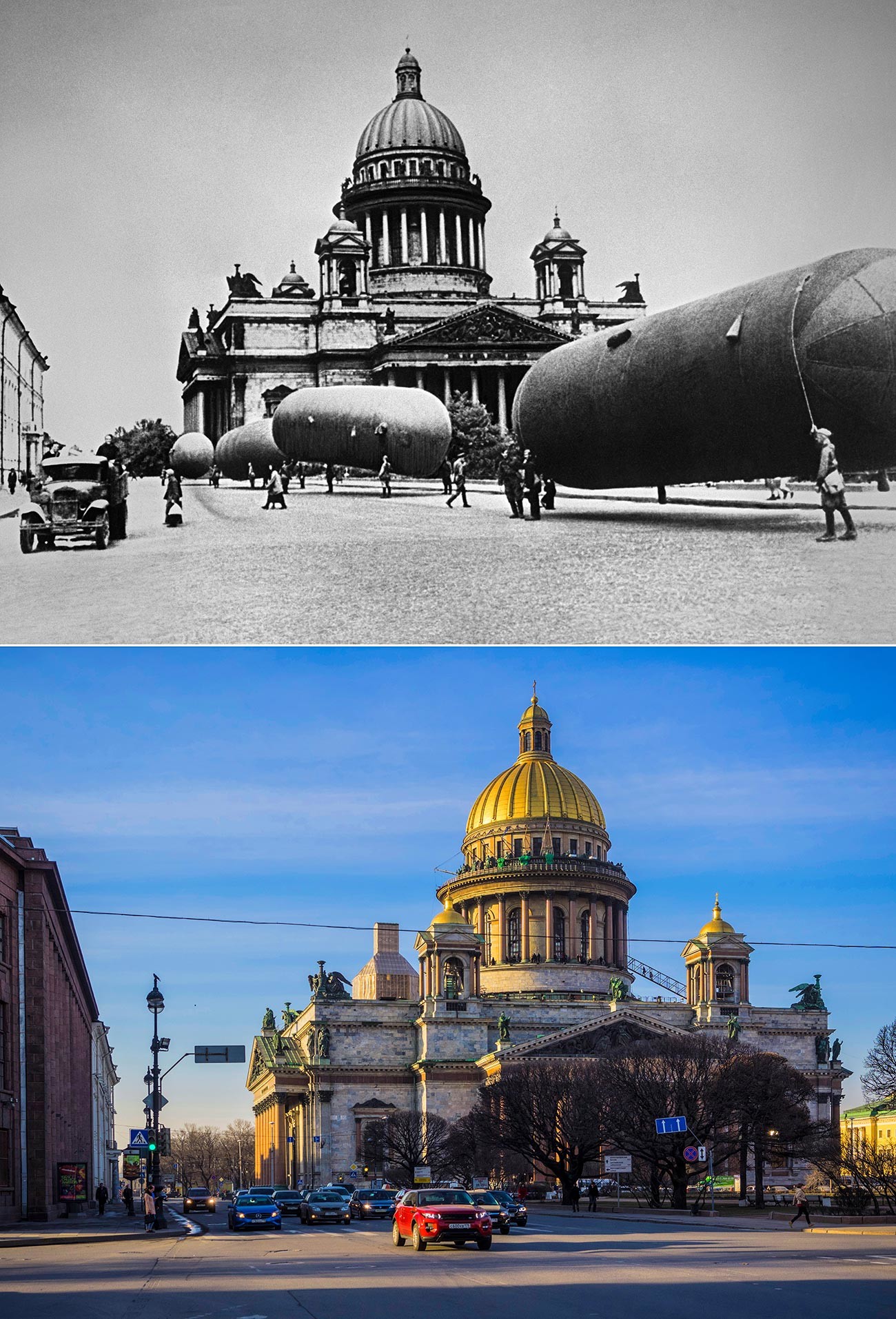 The St. Isaac’s and Saints Peter and Paul Cathedrals were gold-plated later and electroplating technology was used. The chemists realised that simple painting over was a suitable way of camouflage: the paint could be then washed down without damage. But there was another difficulty: Baranov emphasized that the top of the spire of the Cathedral of Saints Peter and Paul swung with a range of a meter and a half. Junior lieutenant Mikhail Bobrov, the first climber there, had to make his way to the top (he had to attach a rope) by old stairs and no one was sure they could sustain a man’s weight. However, the climbers managed to fulfill their important task and the gold stopped being the enemy’s guide.

Many objects of the city were hidden under special camouflage nets with colored pieces of fabric. Scene painters participated in making the nets and their skills of painting theater decorations helped them a lot. They used special paints and made the enemy pilots see parks and fields instead of strategic buildings. The painters also had to bring in seasonal changes in time. They added more and more yellow and red colors in autumn and paid attention to the amount and textures of snow in winter. 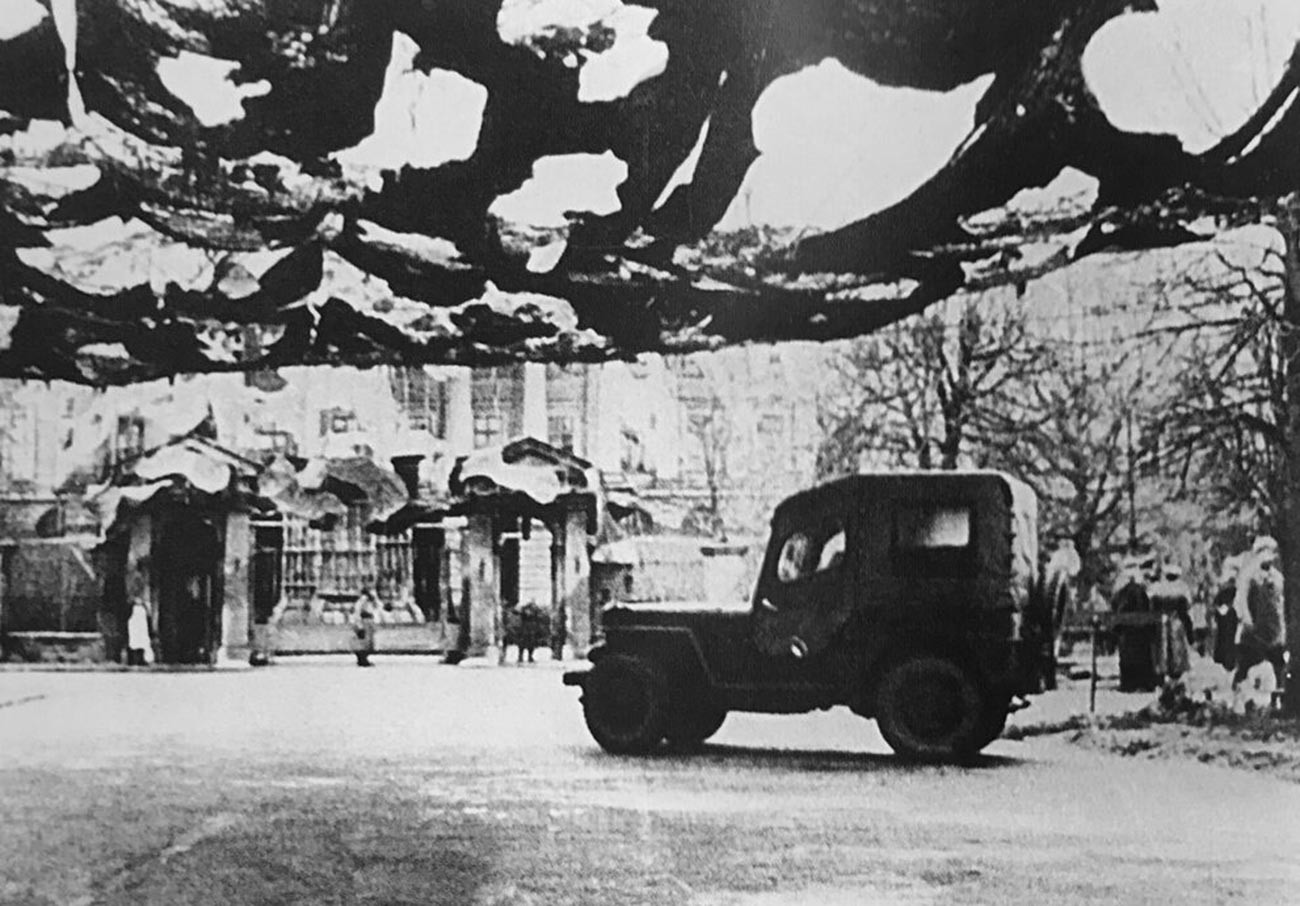 But the nets weren’t just painted: the makers gave them an extent to improve their natural appearance. A ballet dancer of the Kirovsky Theater (now Mariinsky Theater) named Olga Iordan later recalled: “In the scenery hall on Ulitsa Pisareva, we scutched the bast, tied it in bunches and sewed it to the nets. We knew this work was necessary for the city defense.” Also, natural plants and cut branches were often tied to the nets. 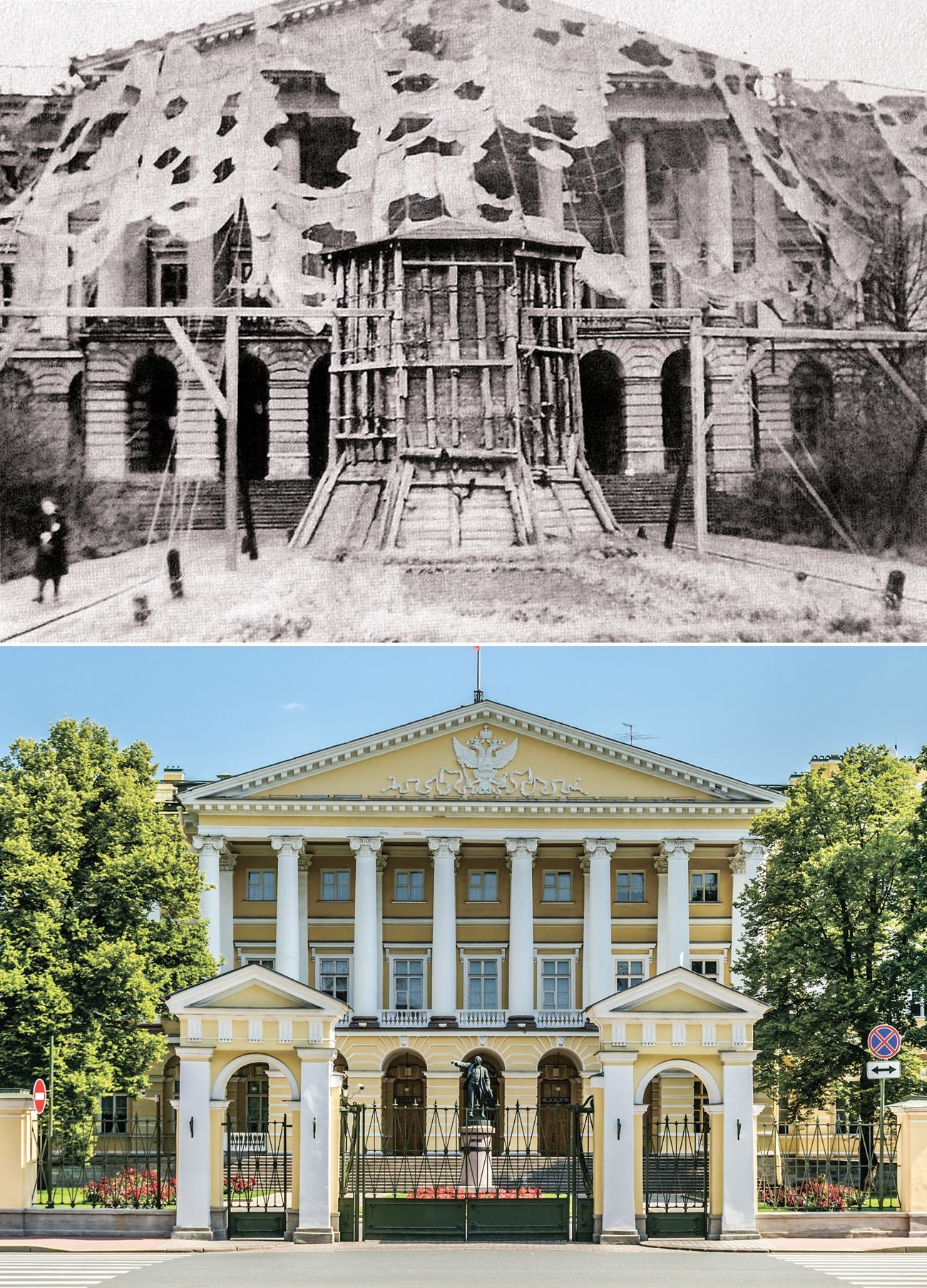 Archive of the Memorial Museum of the Defense and Siege of Leningrad; Alex 'Florstein' Fedorov (CC BY-SA 4.0)

The former building of the Smolny Institute that housed the administration of Leningrad was an example of net camouflage. It was interfused with the surrounding greenness. Architect Alexander Gegello remembered: “A camouflage net with applications imitating tree crowns was stretched. The nets were attached to the roof angle-wise to hide the ‘П’-form of the building,” The recognisable Neva river bend was hidden too: a fake river was depicted as a continuation of Sovetsky (since 1944, Suvorovsky) Prospekt. 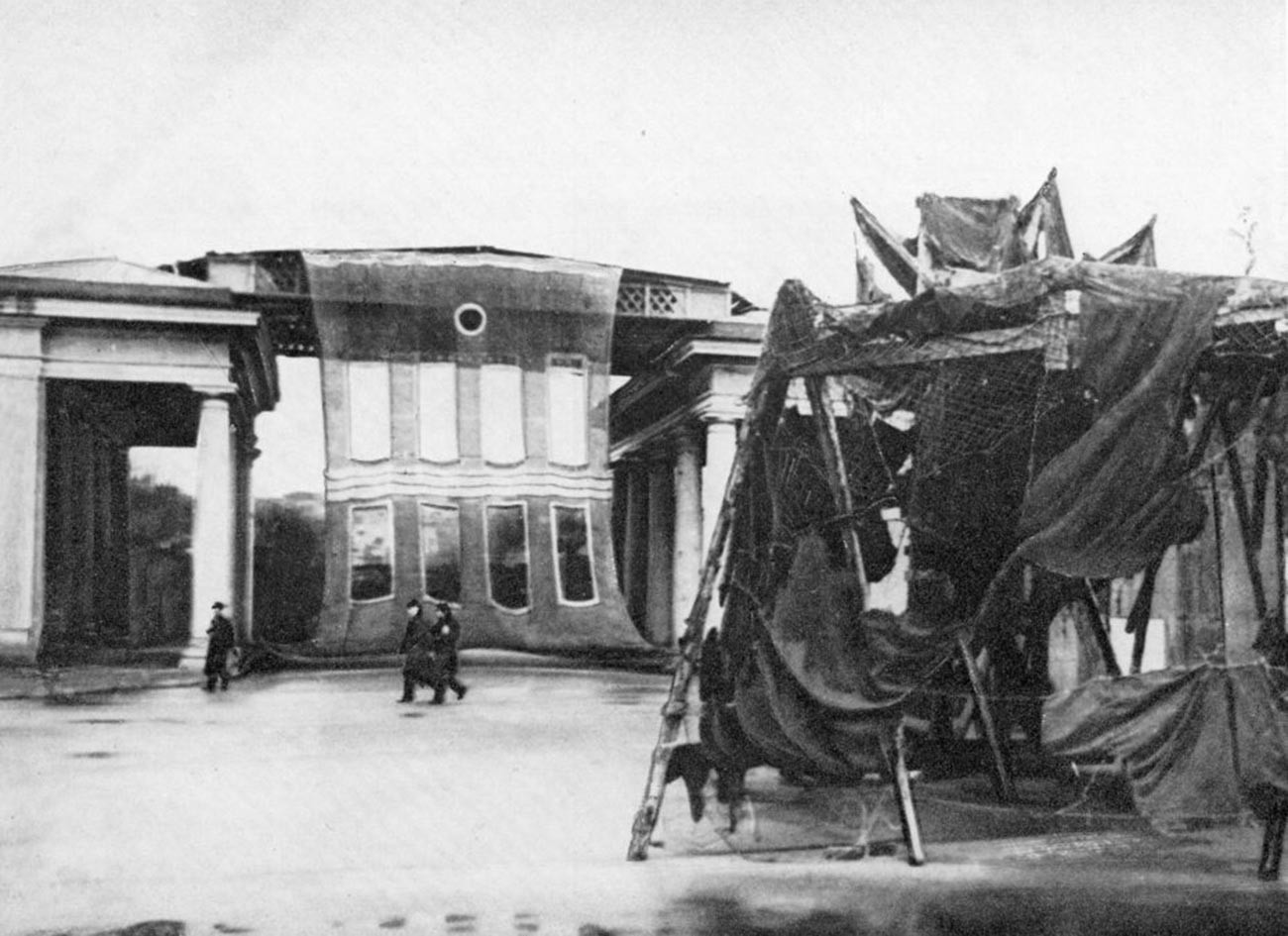 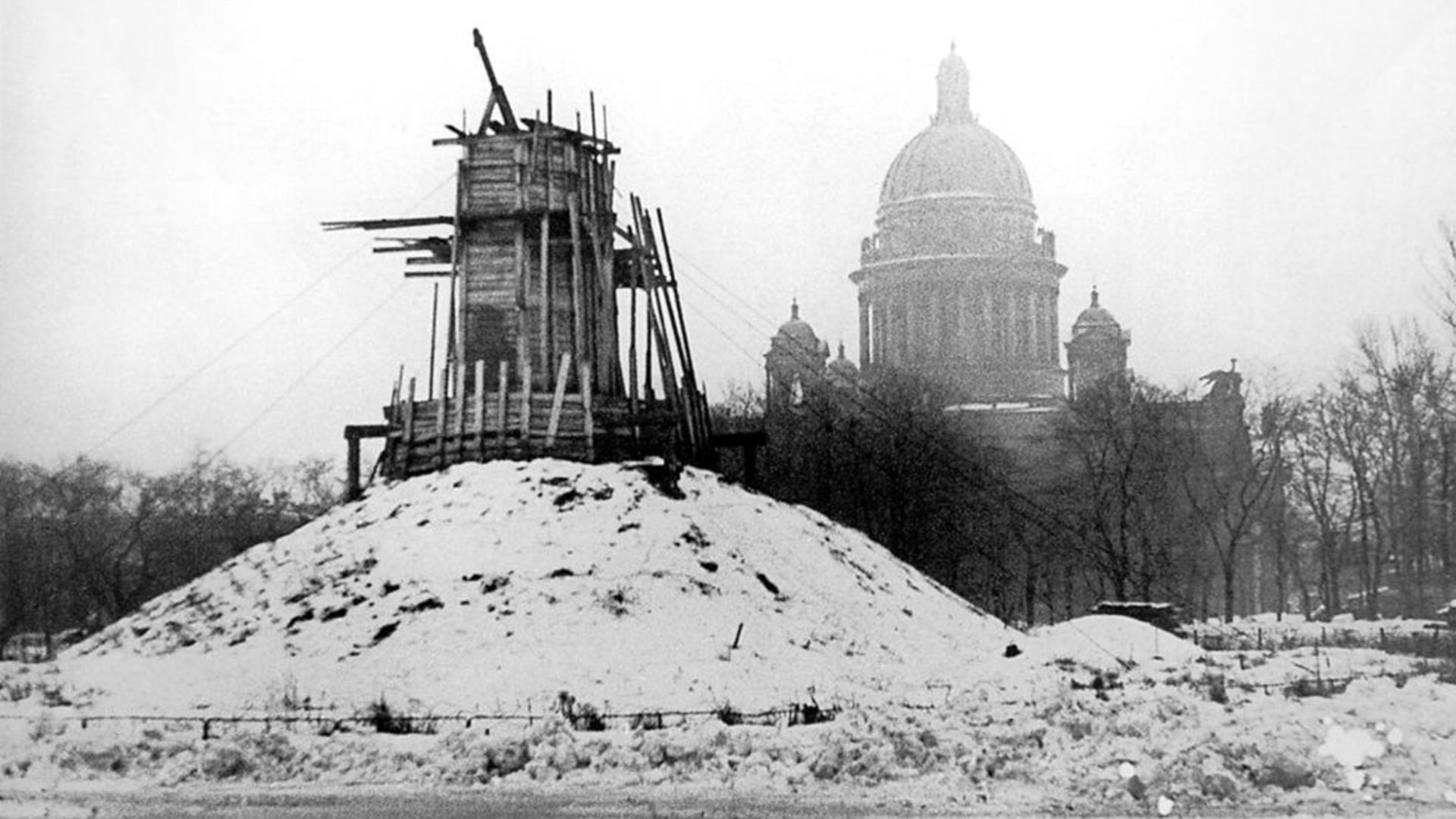 Mikhail Bobrov wrote in his book of recollections: “Huge boxes of sandbags covered up many monuments.” Those sandbags were bound with boards. This was the way of hiding the bigger monuments, like the Bronze Horseman (an equestrian figure of Peter the Great) and the Lenin statue near the Finland Station. 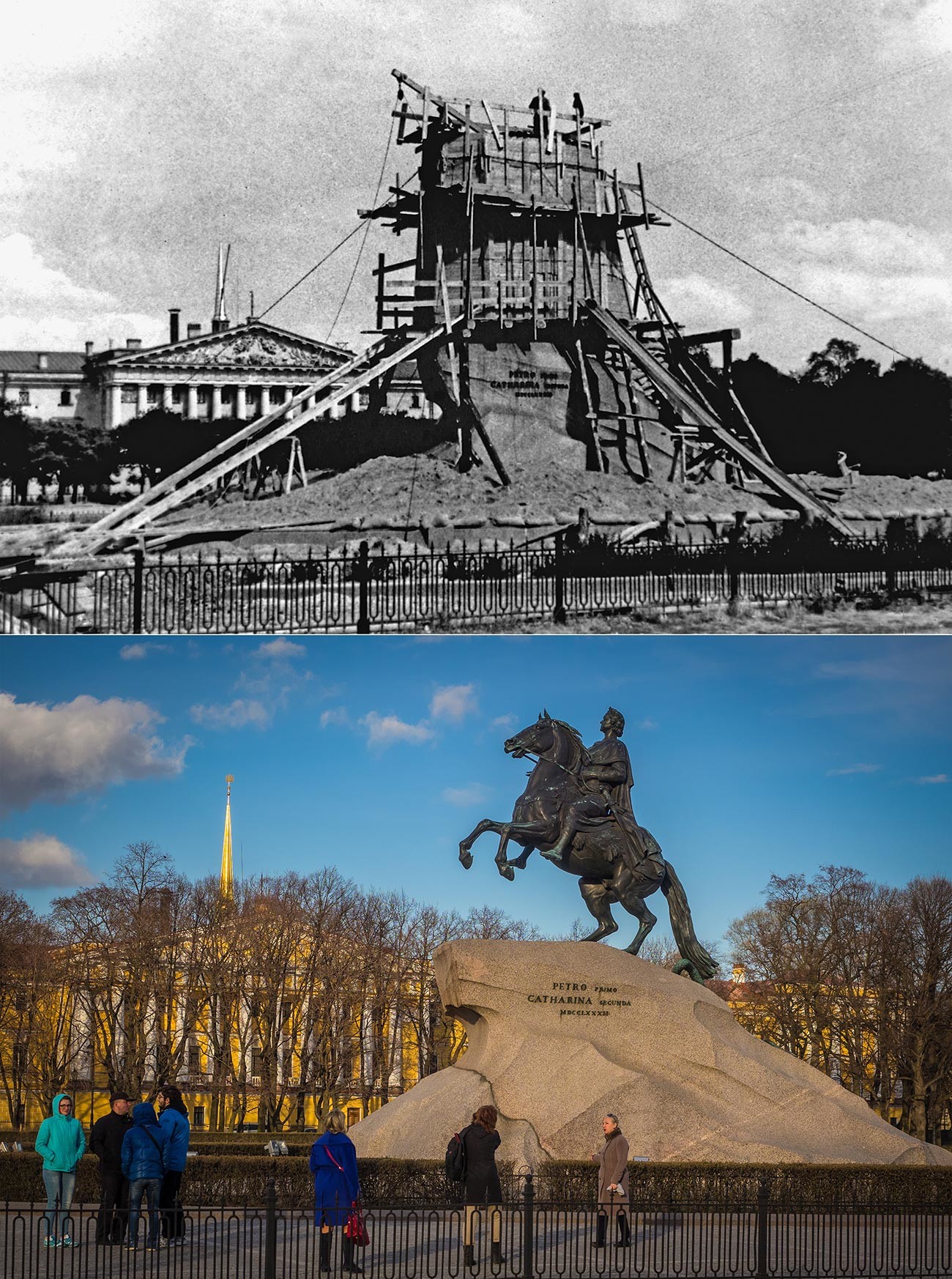 The monument to Peter the Great (The Bronze Horseman).

Some smaller sculptures were taken down from their places and buried to hide them. So, the sculpture groups of Anichkov bridge by Pyotr Klodt called ‘Ukroshchenie Konya Chelovekom’ (“The Horse Tamers”) were buried nearby in the garden of the Pioneer Palace. After the war, they were found by the little hillocks sticking out above them. The sculptures of the unique collection in Summer Garden were buried near their pedestals. 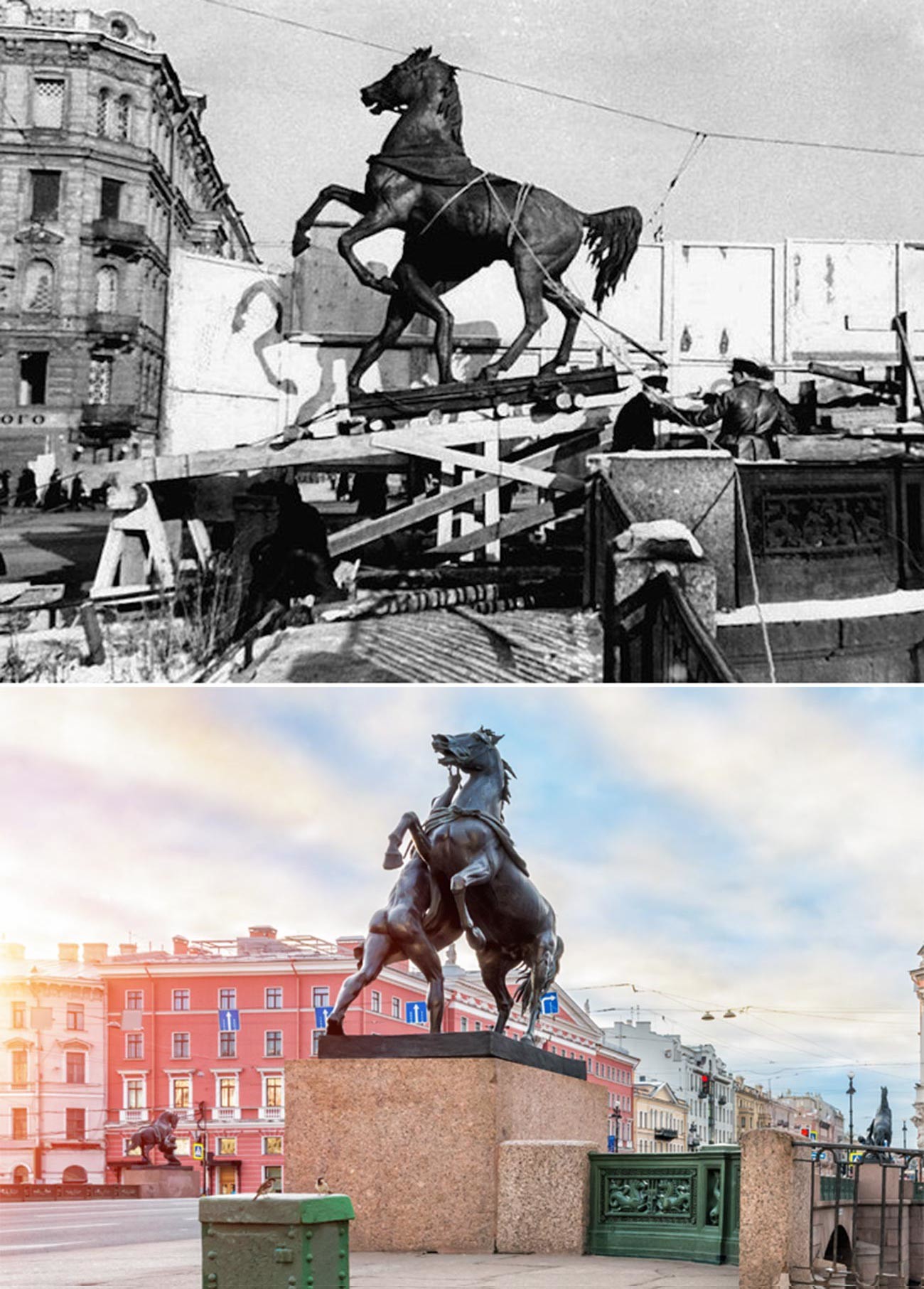 Some monuments were not hidden, however. Mikhail Bobrov wrote: “Only the monuments to the great Russian war commanders left uncovered: to Suvorov, Kutuzov and Barclay de Tolly, which inspired to heroism the defenders of the warrior city.” 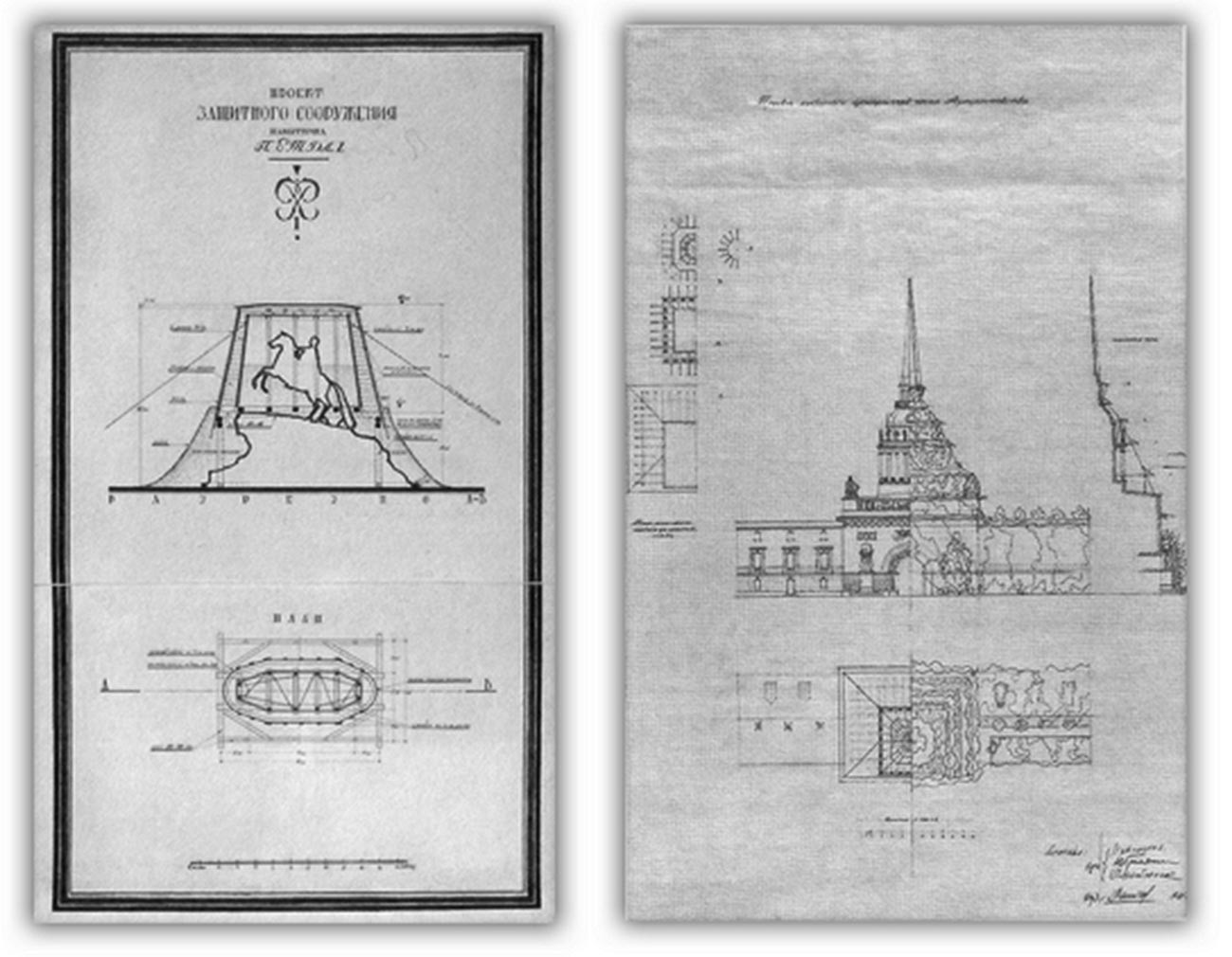 The infrastructure and industries of Leningrad had to be masqued, too. For example, Nikolai Baranov remarked that the hippodrome was a perfect aiming point, as its huge ellipse could be easily seen from above. Actually, a bomb had already hit the building before it was camouflaged. According to the plan, the workers removed the grandstand and filled the open space with models of houses. The length and width of the models were real, but the height was several times lower. The architect recalled: “This dimensional decision set up the characteristic effects of light and shade, which imitated well-yards and the pattern of streets and passages.” The roofs of big plant sections were built up with such models, too. 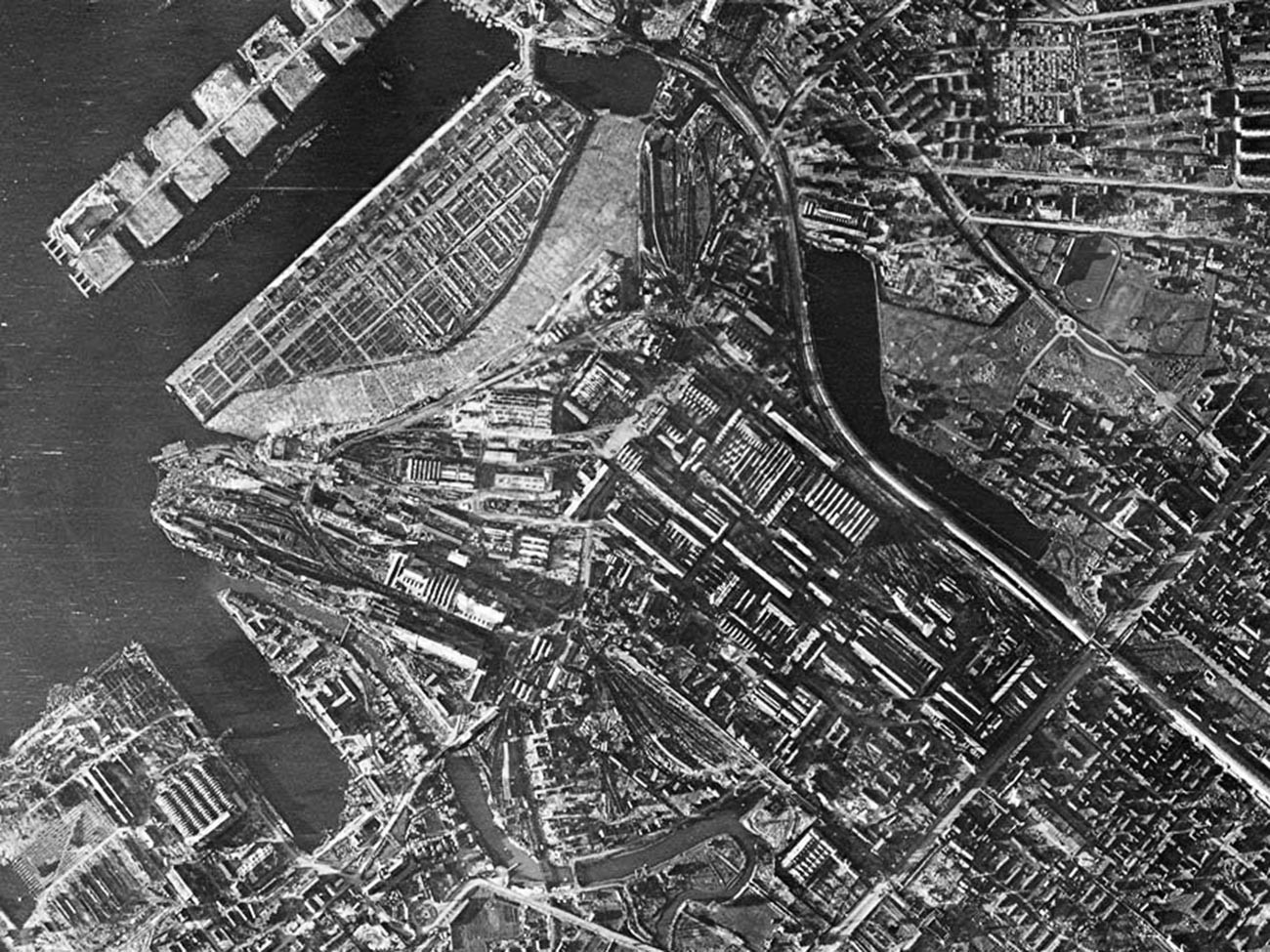 The river bridges and Moskovsky and Vitebsky railway stations were decorated as if they were ruins. The stations were also doubled: their models were placed some distance away. A fake oil terminal dubbed ‘Ruchi’ (“Streams”) was even equipped with some cisterns with fuel oil. These models were heavily bombed, but fixed after each attack.

The tower of the main water supply station was strategically important, so it was covered with horizontal canopies. The new shadow no longer resembled a water tower, so the enemy aviation couldn’t find it. The thermal power plant close to Fontanka river wasn’t so lucky, however: its four tall and remarkable pipes had to be dismantled to hide the plant.

The enemy bombs damaged Leningrad considerably during the hard times of Siege, but the correct camouflage helped the city avoid catastrophic destruction.