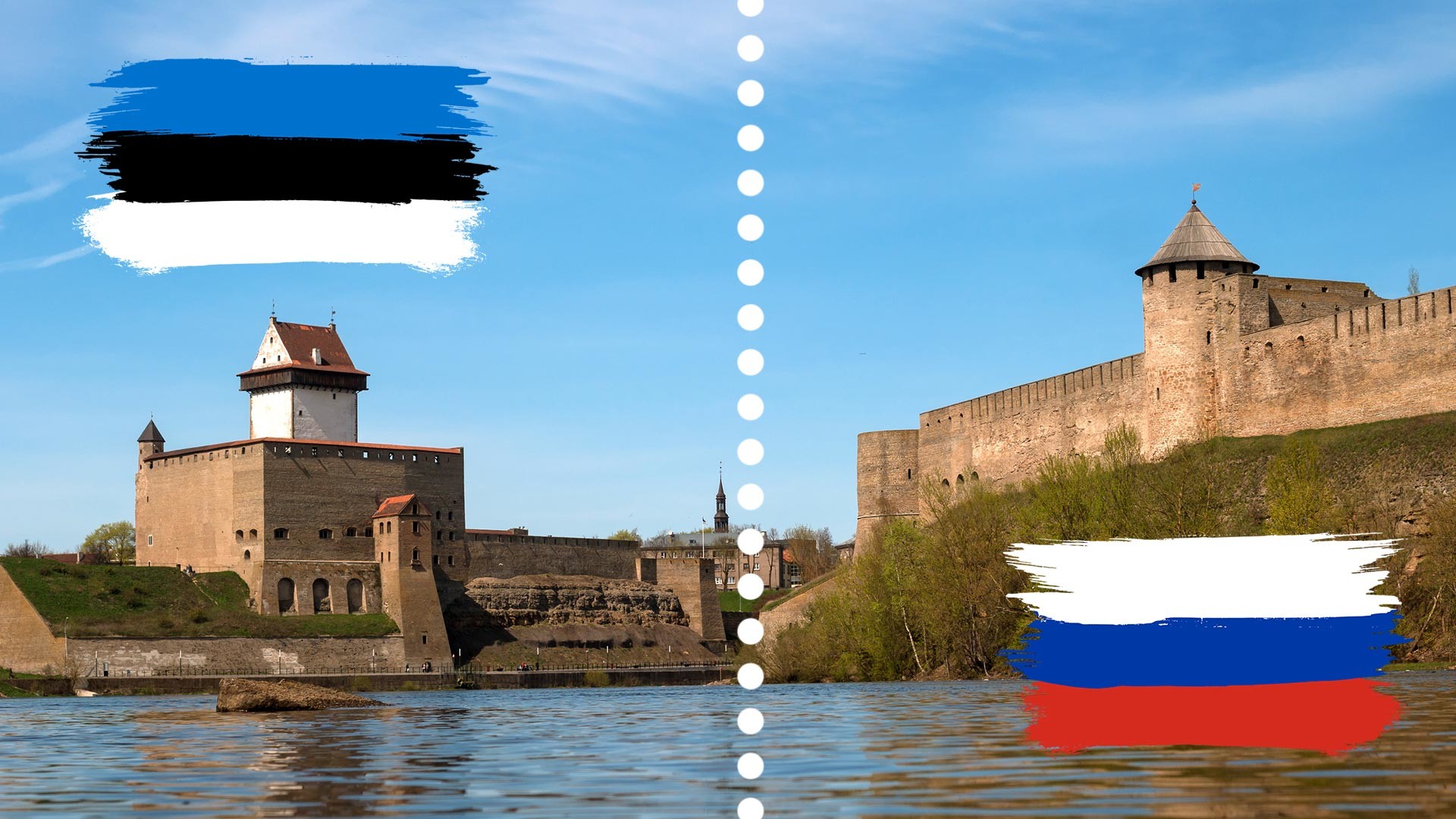 Legion Media
Did you know that only 4 km divide Russia and the U.S.? Check out some interesting facts about Russian borders.

Officially, Russia borders 18 states, and this is the biggest number of neighboring countries in the world! Only 8 of them are former Soviet republics, and the other 10 are located in Europe, Asia … and even America. The total length of the Russian border is 60 932 km (22 125 km is land, and 38 807 km is sea borders). 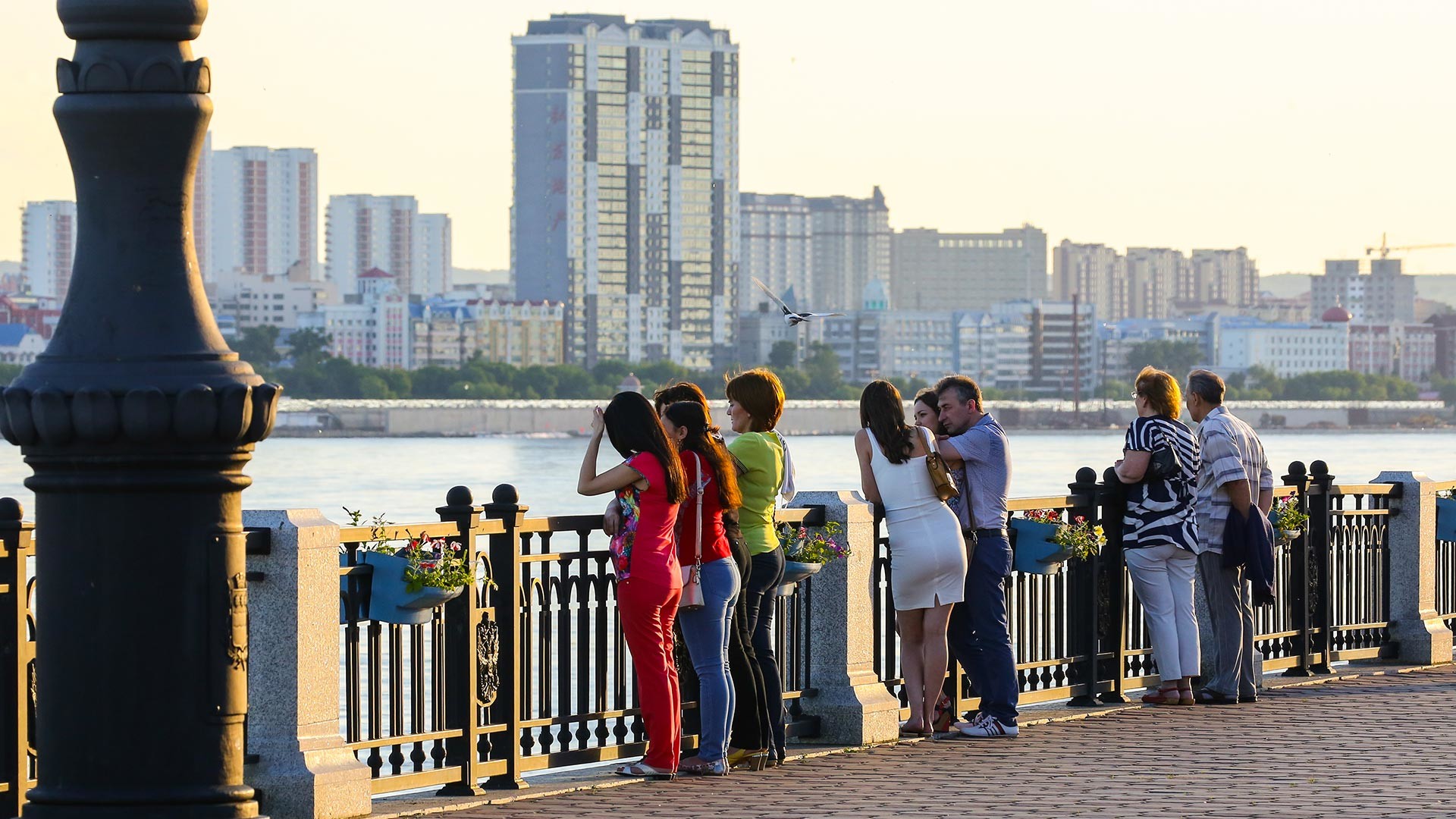 Blagoveshchensk. View of the Amur River embankment and the city of Heihe.

The Russia-China border is more than 4,200 km long and it passes through a large number of rivers and lakes. There are only 500 meters between the Far Eatern city of Blagoveshchensk and the Chinese Heihe. The countries are also divided by the Amur River. Locals from both countries can greet each other during a walk along embankments. In 2023, it is planned to open a funicular over the river, which will allow people to get from one country to another in just a few minutes.

In Siberia, there’s only 6 km between the towns of Zabaikalsky and Manzhouli and, for Russian tourists, there are a huge number of shopping and entertainment centers. The most impressive is the giant Matryoshka doll on entry. 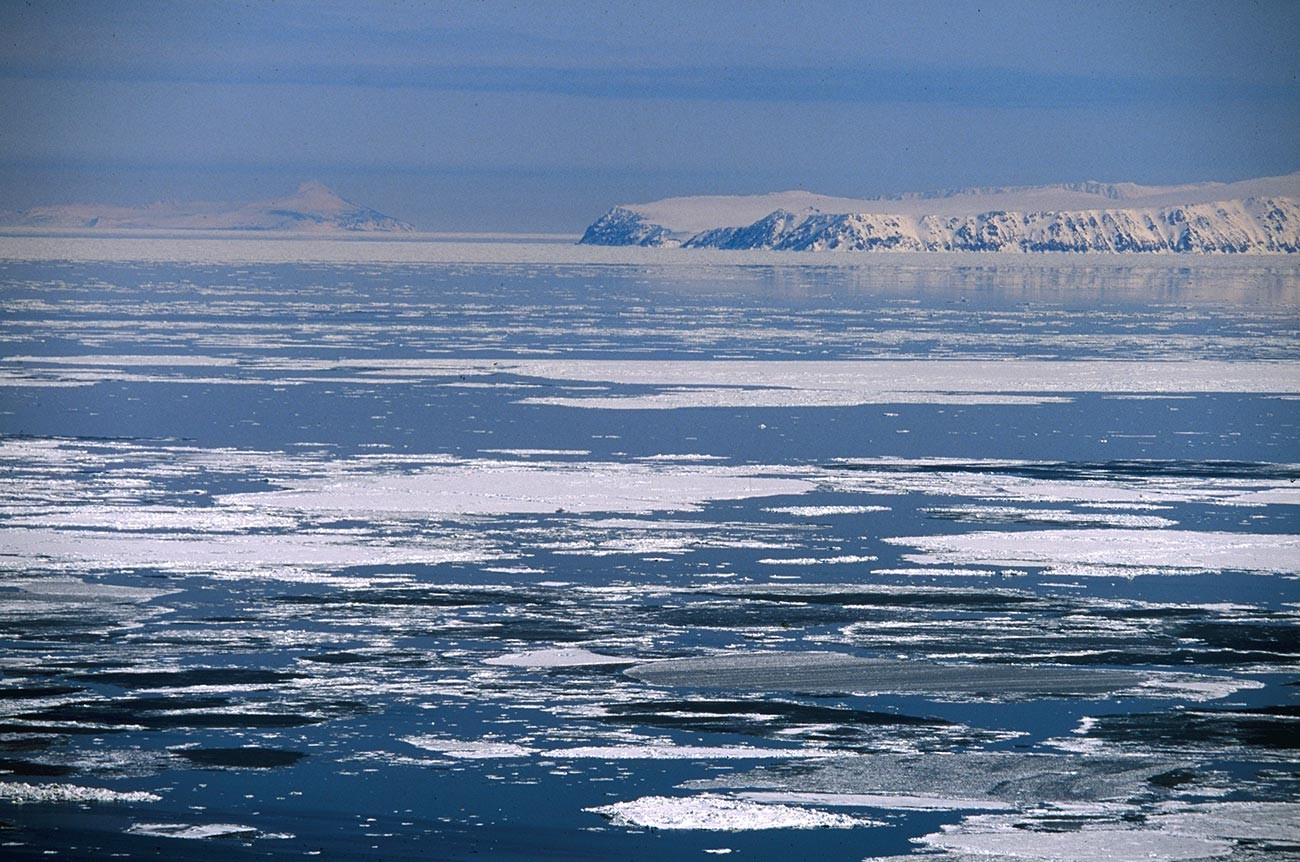 The Russian island of Big Diomede, or Ratmanov (right), and the U.S. island of Little Diomede, or Krusenstern (left), in the Bering Strait.

There are only 3,750 meters separating Russia and the U.S. - the border between the countries passes through the water in the Bering Strait in between the Diomede Islands. Ratmanov Island (Big Diomede) belongs to Russia, and Krusenstern Island (Little Diomede) belongs to the U.S. There is also a date change line here. About 100 people live on the American side (native inhabitants of Alaska), while only the border control service base is located on the Russian side. 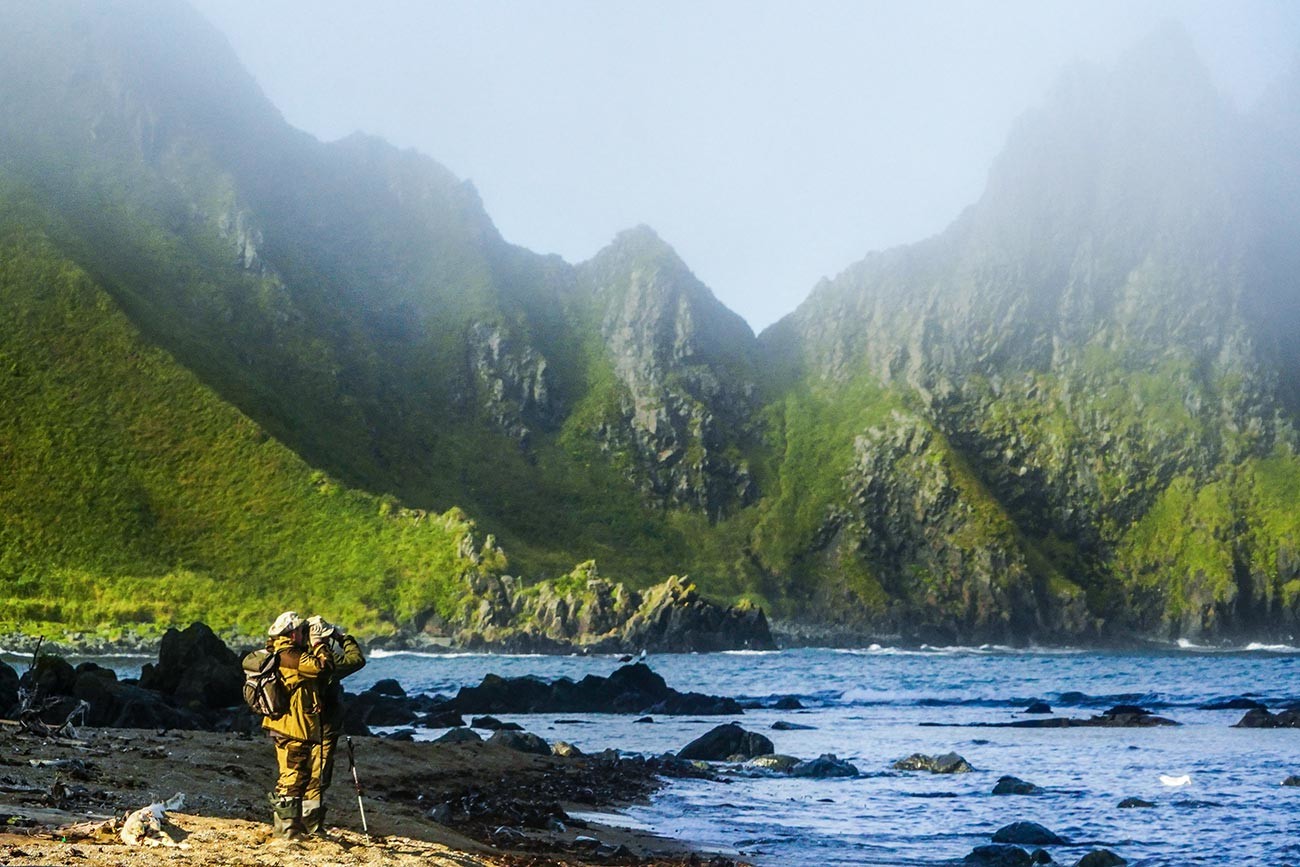 The border between the countries was established after World War II and passes through the area of the Kuril Islands. However, Japan doesn’t agree with this and considers these islands its territory. Russian border guards often record border violations by Japanese fishermen. 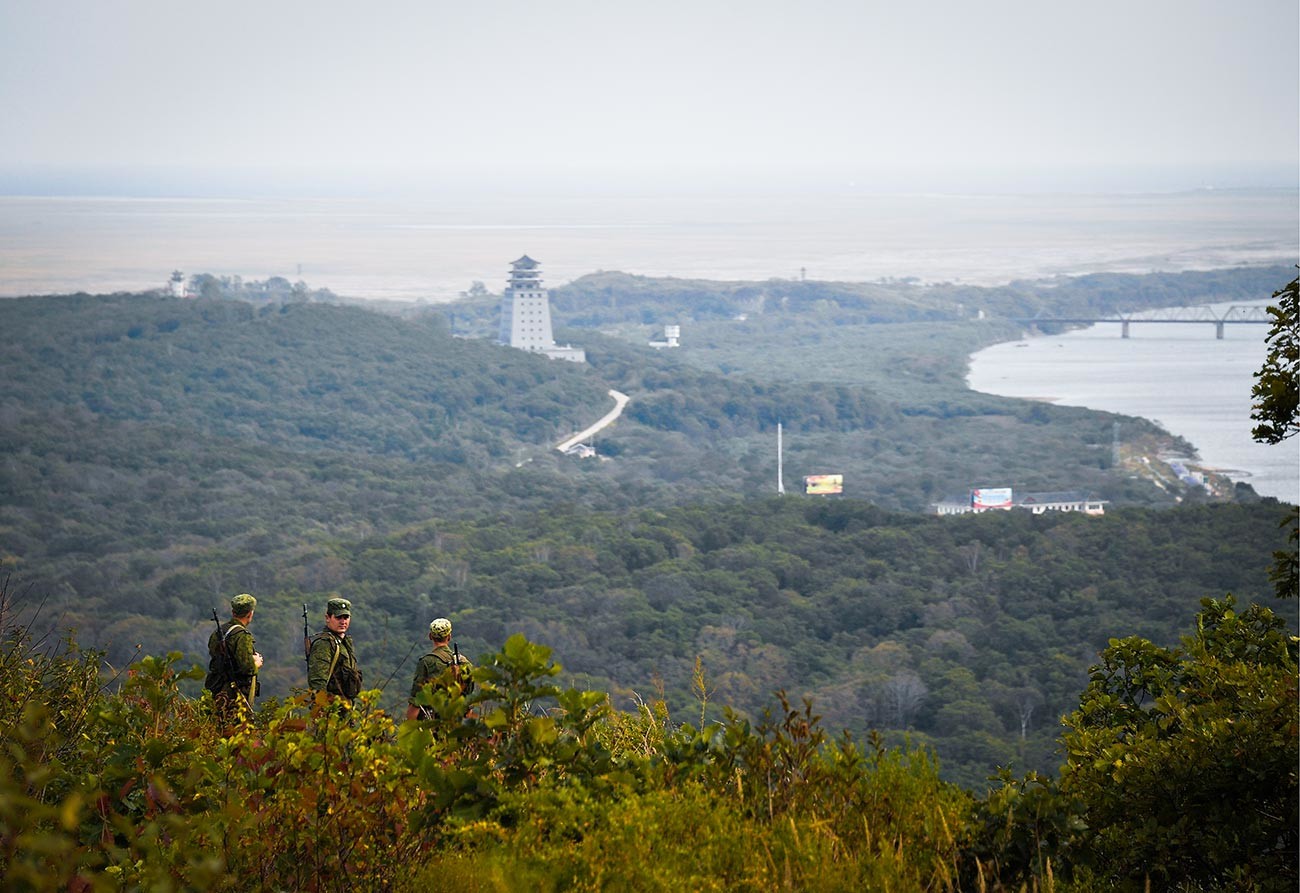 The border between Russia and the DPRK is less than 40 km long and runs along the Tumannaya River in the Primorsky Territory near the Khasan station. The Friendship railway bridge was built across the river in the Soviet years. 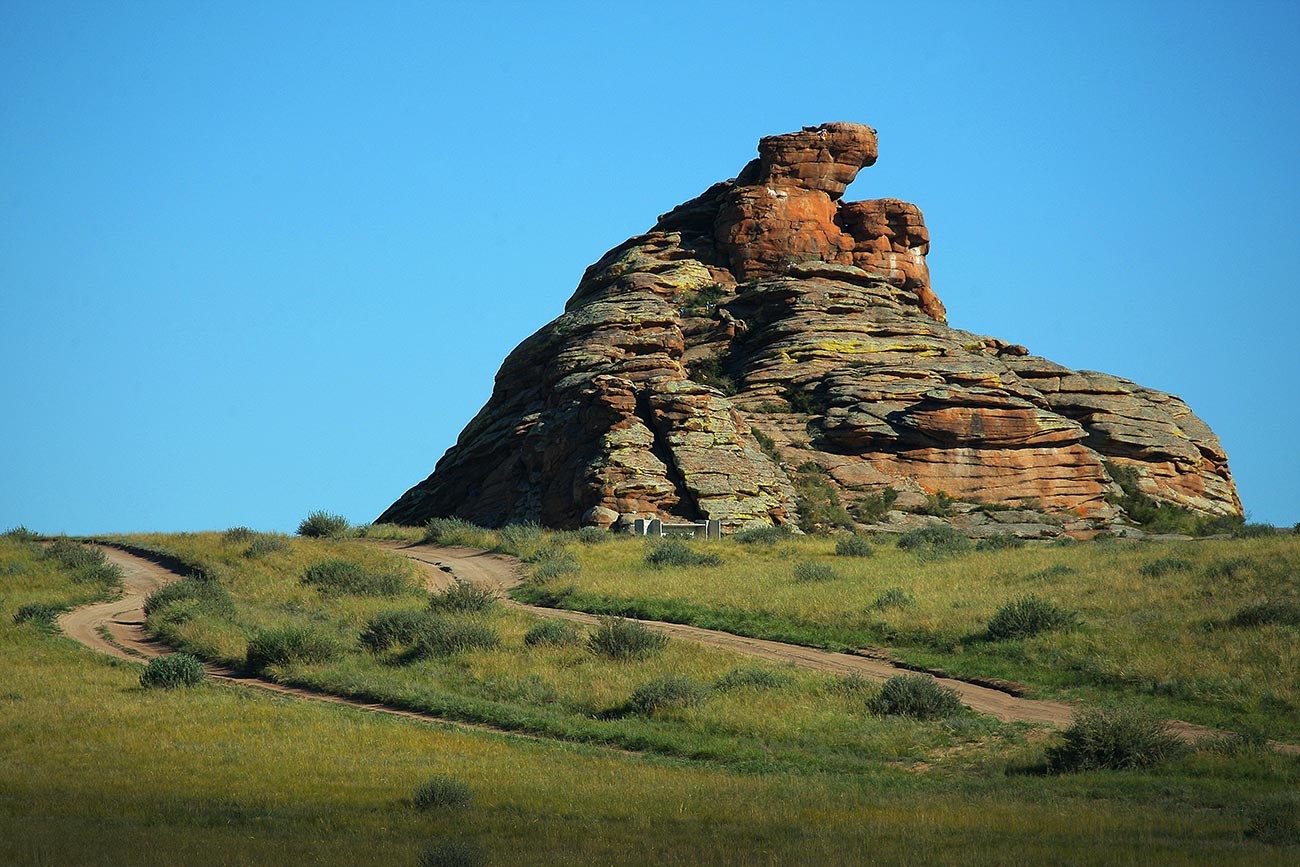 A rock near the border.

Russian Republic of Altai, Tyva, Buryatia and the Trans-Baikal Territory border with Mongolia and most of the border (total length 3,485 km) passes through very remote places. Because of this, there are only 12 checkpoints there. 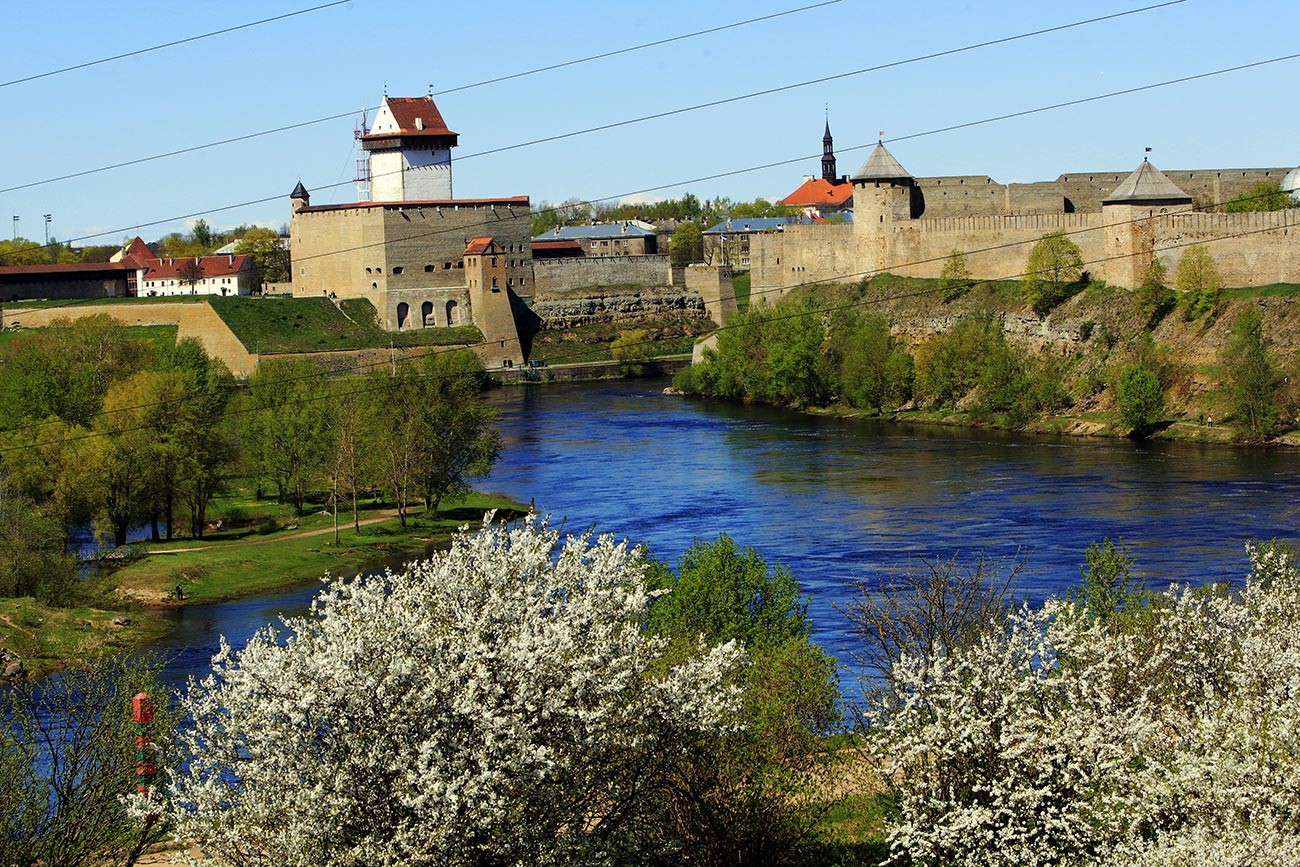 Estonia is on the left, and Russia on the right.

One of Russia’s most beautiful international borders runs between Ivangorod (Pskov Region) and Narva (Estonia): two medieval fortresses are linked by a pedestrian bridge across the river. In 1957, when Estonia was part of the USSR, the republics exchanged small areas of territories (then it was just a formality) and today, as a result, Russia has claim to the semi-enclave of Dubki. 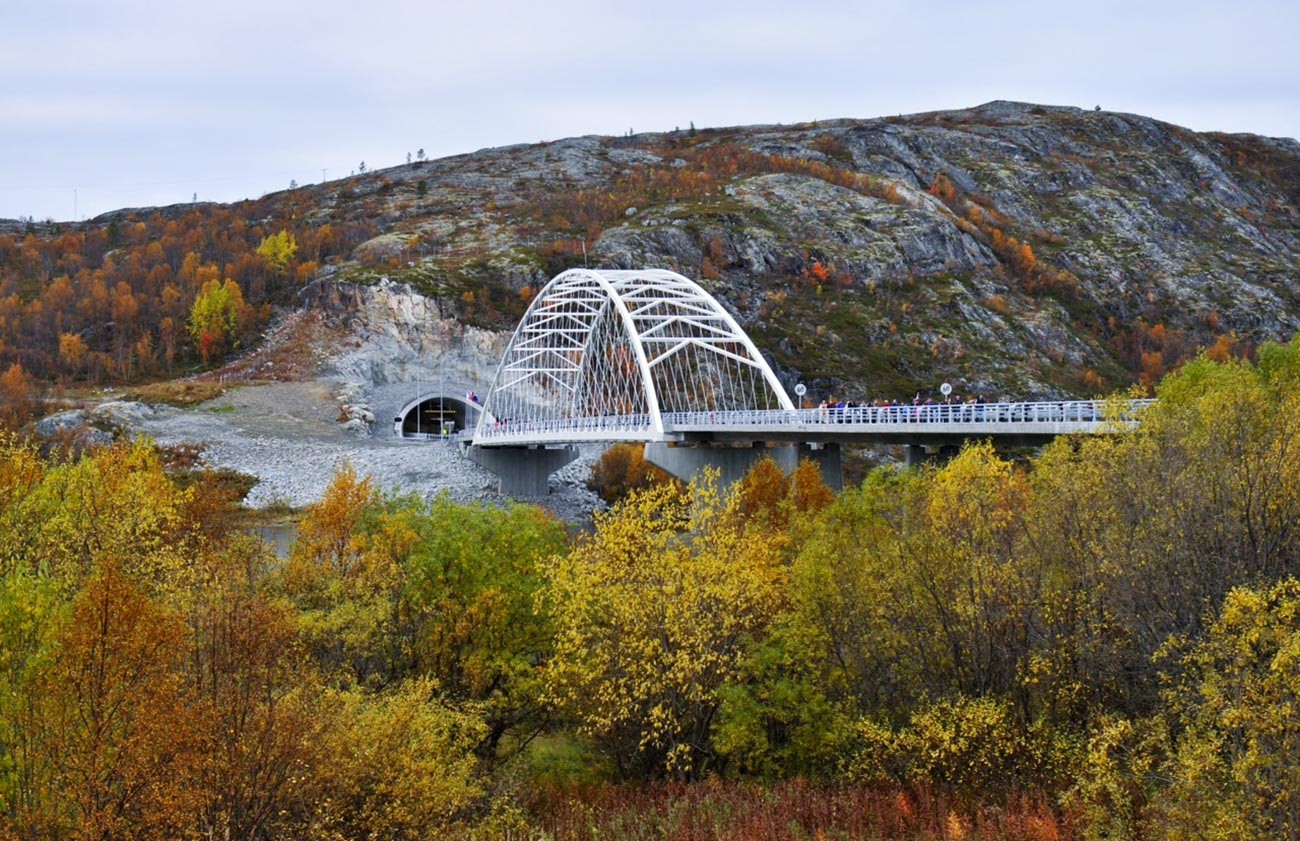 The bridge near the border.

The northernmost border of Russia passes beyond the Arctic Circle in Murmansk Region. In fact, during the Soviet years, it was closed. The Russian border village is inhabited mainly by border service and employees of the local hydroelectric power station. 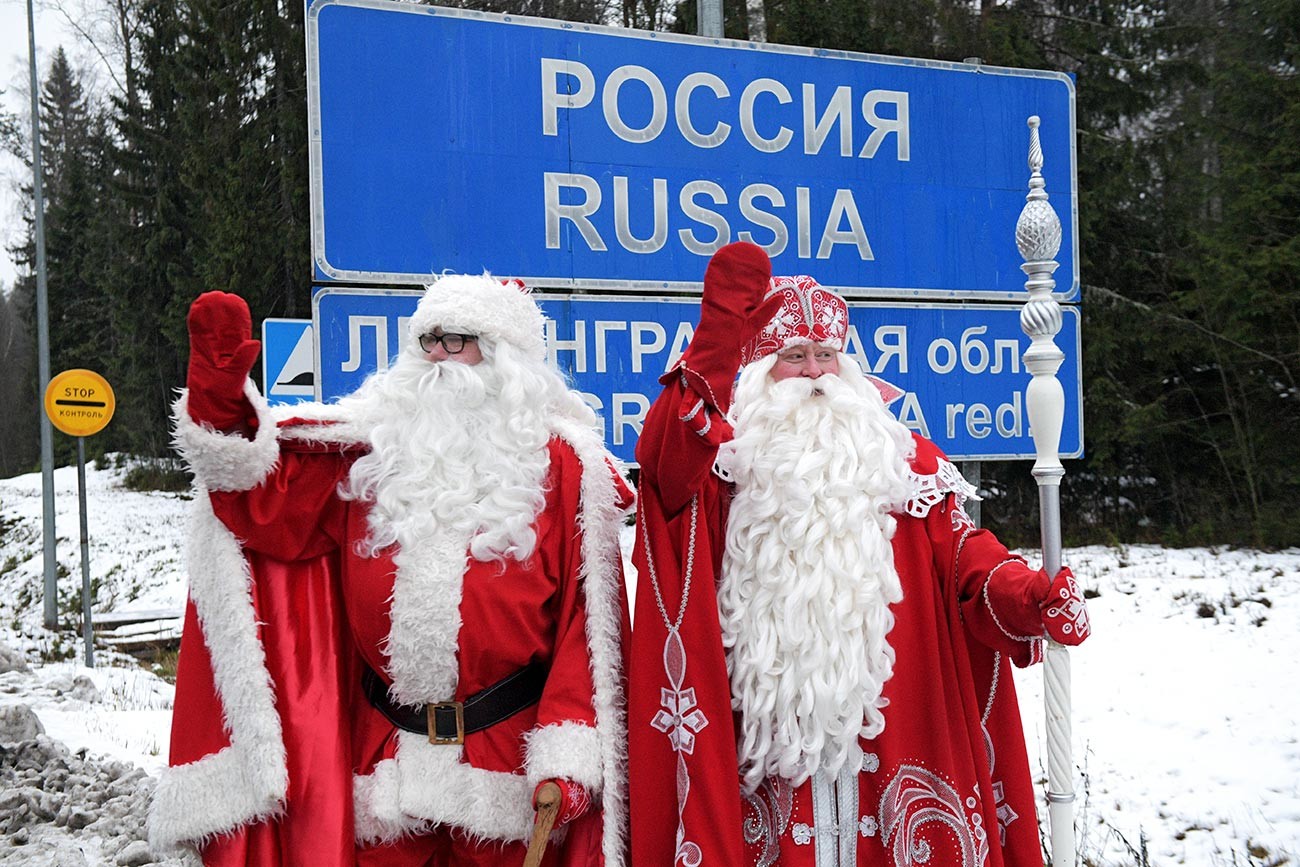 Russian and Finnish Santas on the Russian-Finnish border.

There are eight checkpoints on the Russian-Finnish border: three in the Vyborg district, three in Karelia and two in Murmansk Region. There are also two checkpoints for a simplified crossing in Karelia, which only citizens of Russia and Finland can use. 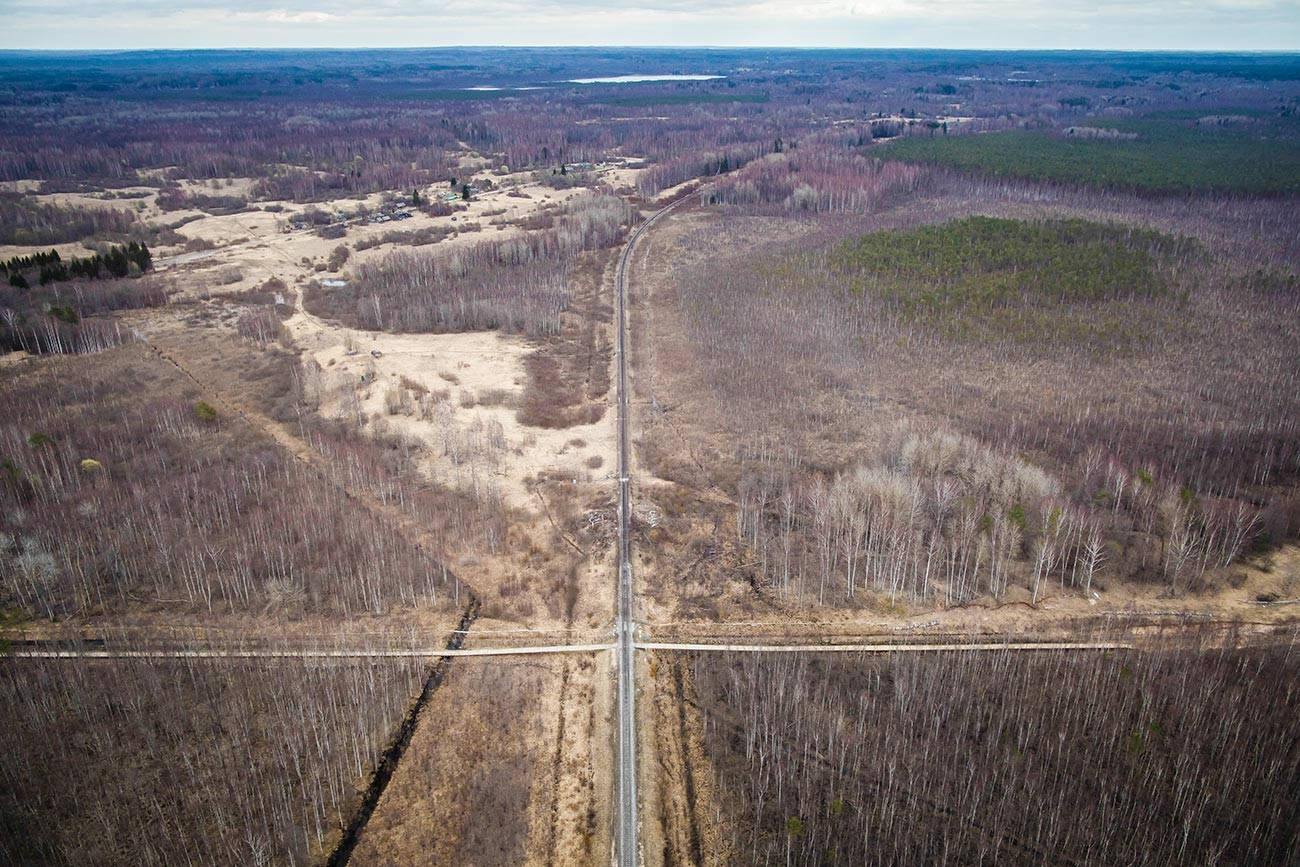 This aerial view shows the Latvian-Russian border and a crossing railway track near Ludza.

The border between Russia and Latvia passes through Pskov Region and is just over 270 km. It is also where Russia borders with the EU and NATO. 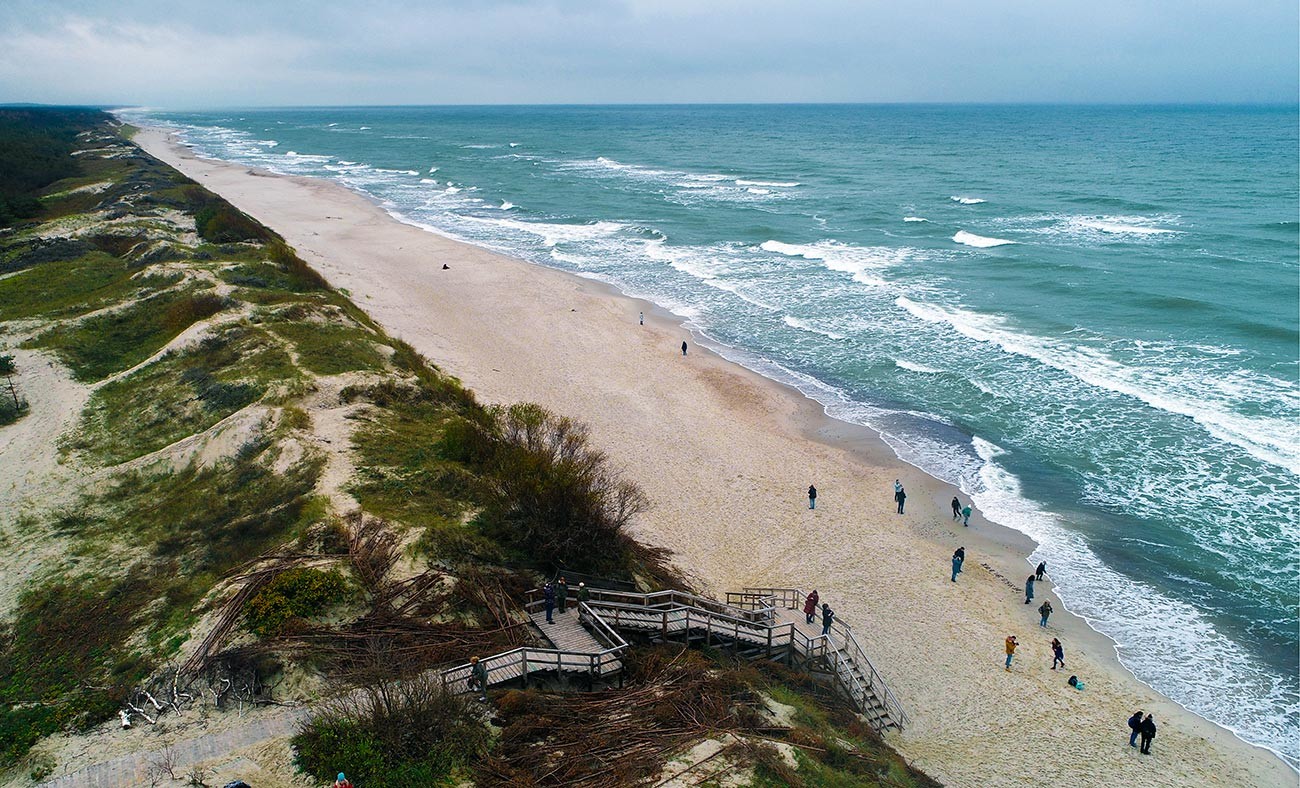 Most of the Russian-Lithuanian border passes through the Curonian Spit in Kaliningrad Region, the Russian enclave. This is one of the most picturesque places along the Baltic Sea. 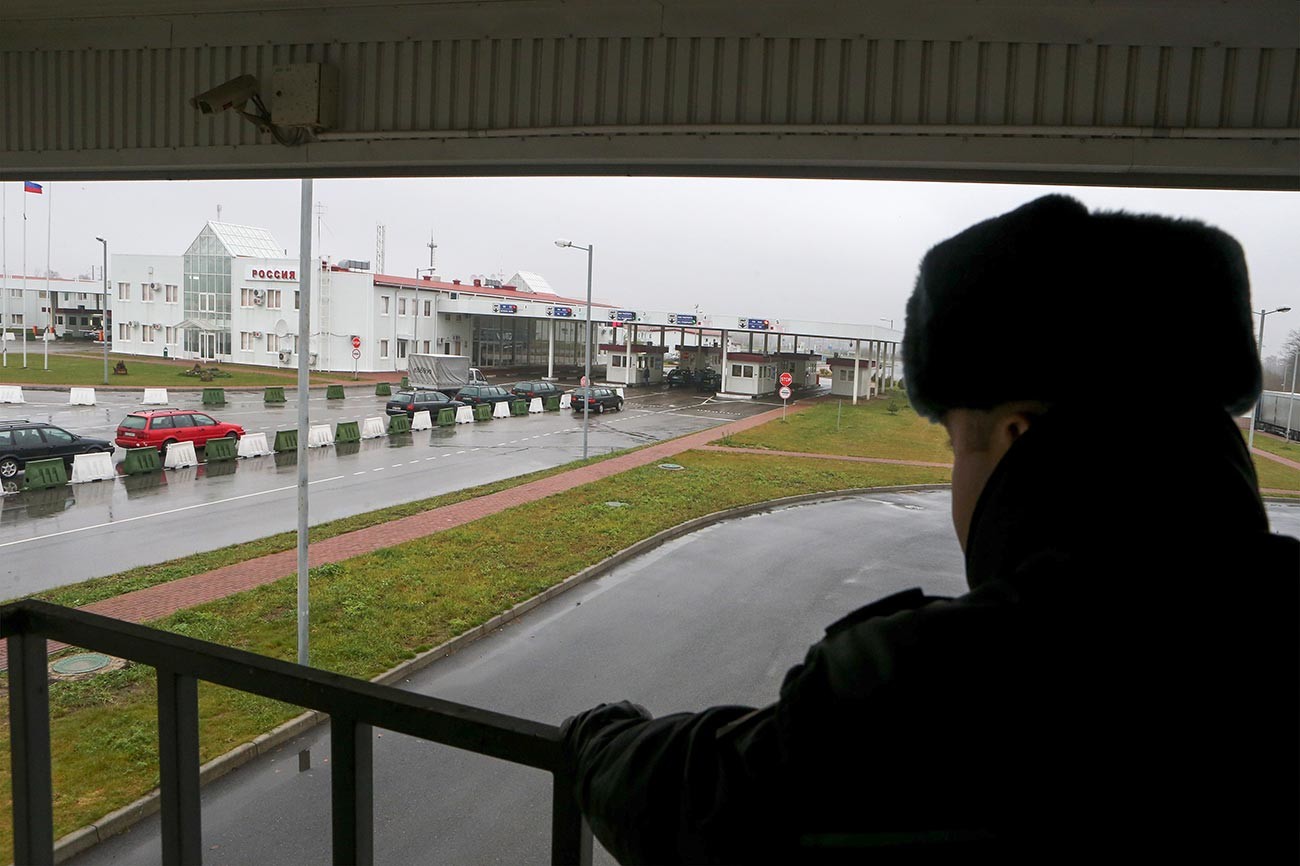 The border runs from the other side of Kaliningrad Region, through the Baltic Spit. People can cross the border in several places by rail, car and even by bicycle. 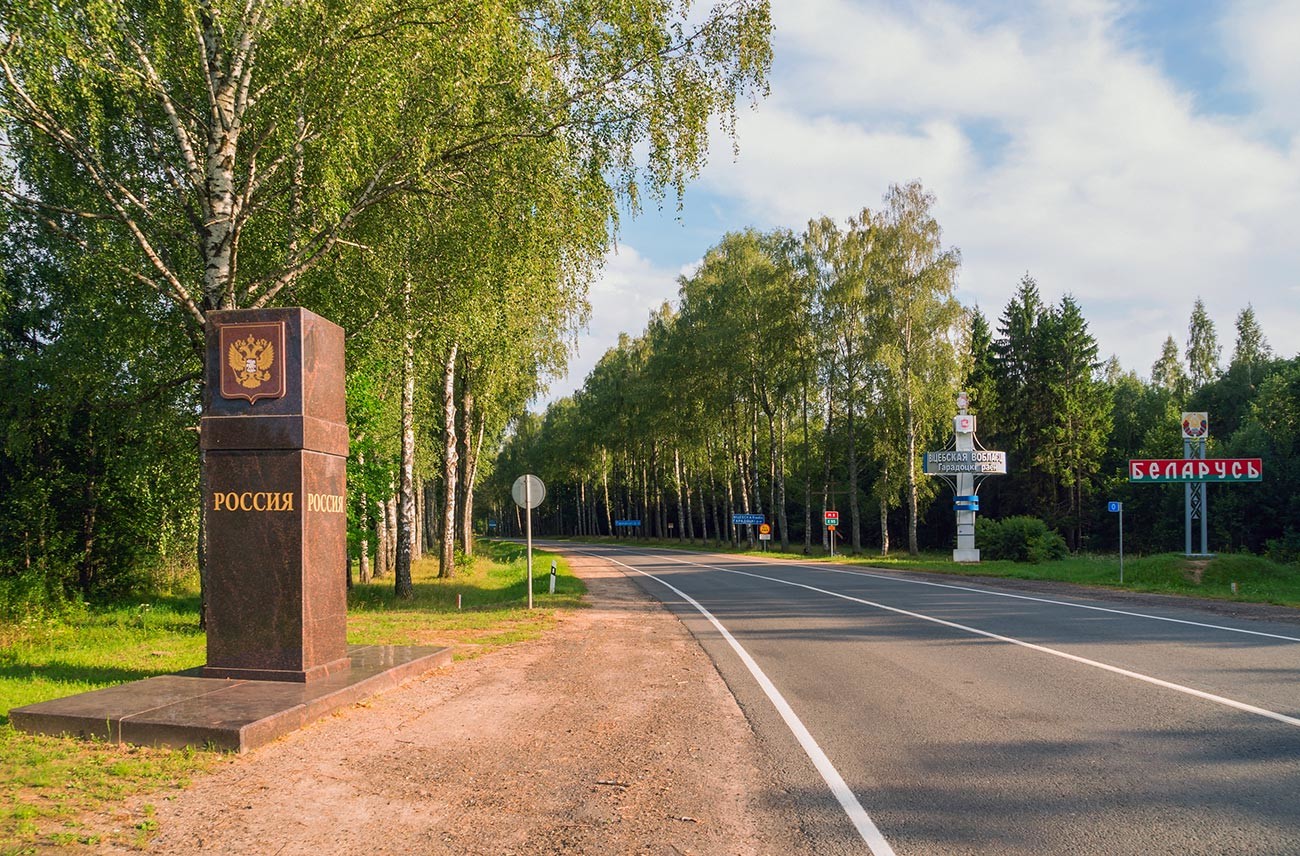 Stele of Russia and Belarus on the border road.

The border appeared after the fall of the USSR in 1991 and exists only formally, without border control. It runs along the Pskov, Smolensk and Bryansk regions. Despite the absence of checkpoints, foreigners wishing to visit both countries need to obtain two different visas. 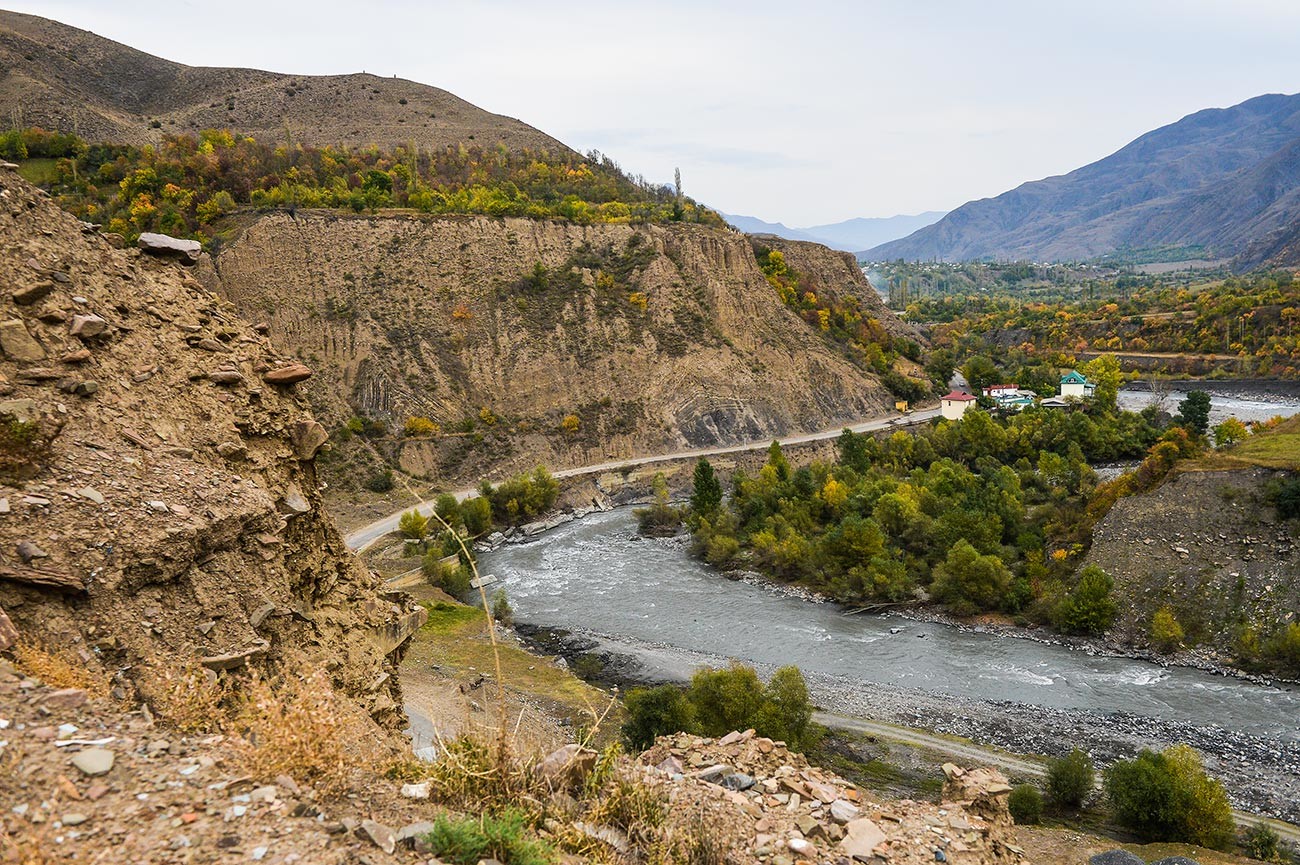 The Samur River in Dagestan.

The border with Azerbaijan runs along the Republic of Dagestan, the southernmost area of Russia. It also passes along the Samur River in the mountains. 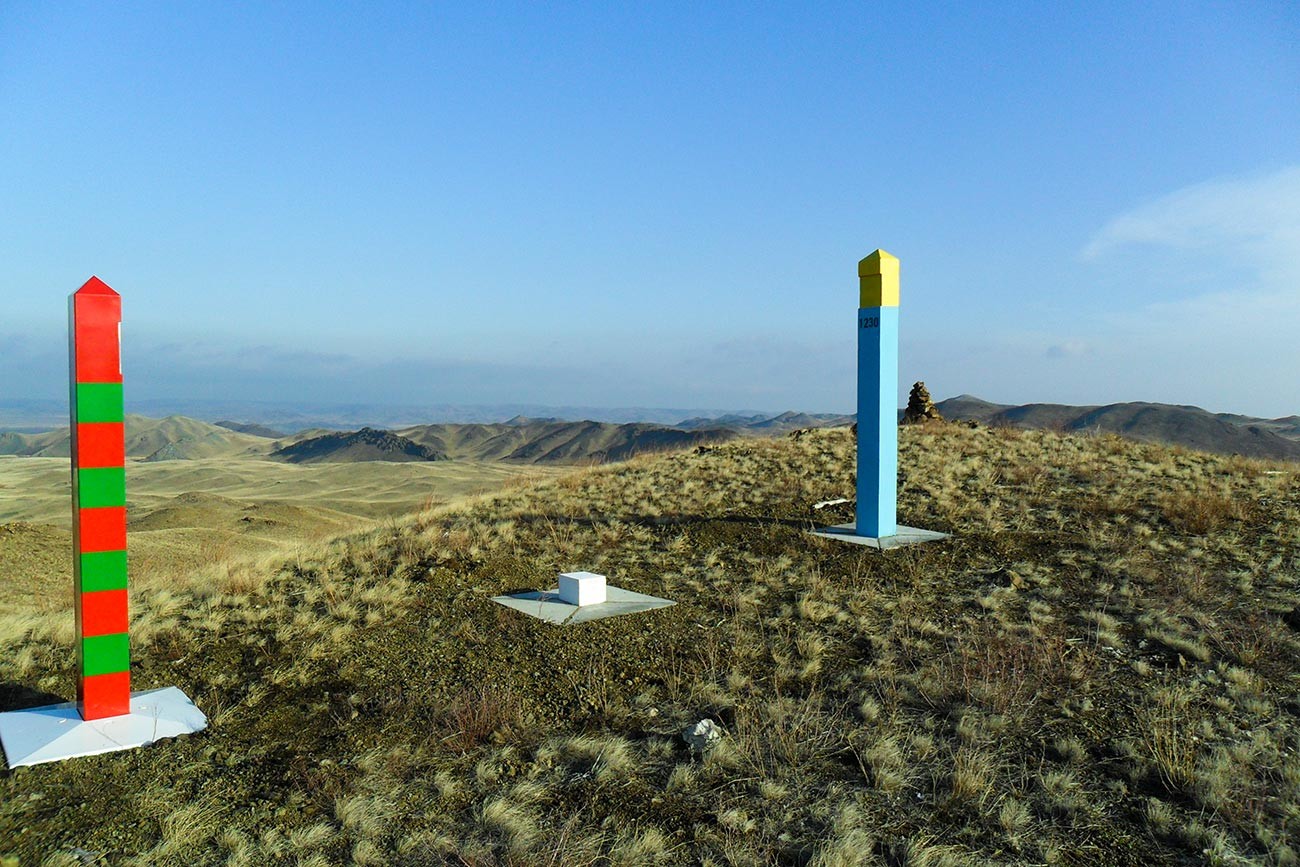 The longest land border in the world runs between Russia and Kazakhstan - 7,598.8 km. In Russia, 12 regions border Kazakhstan, from Astrakhan to Altai. 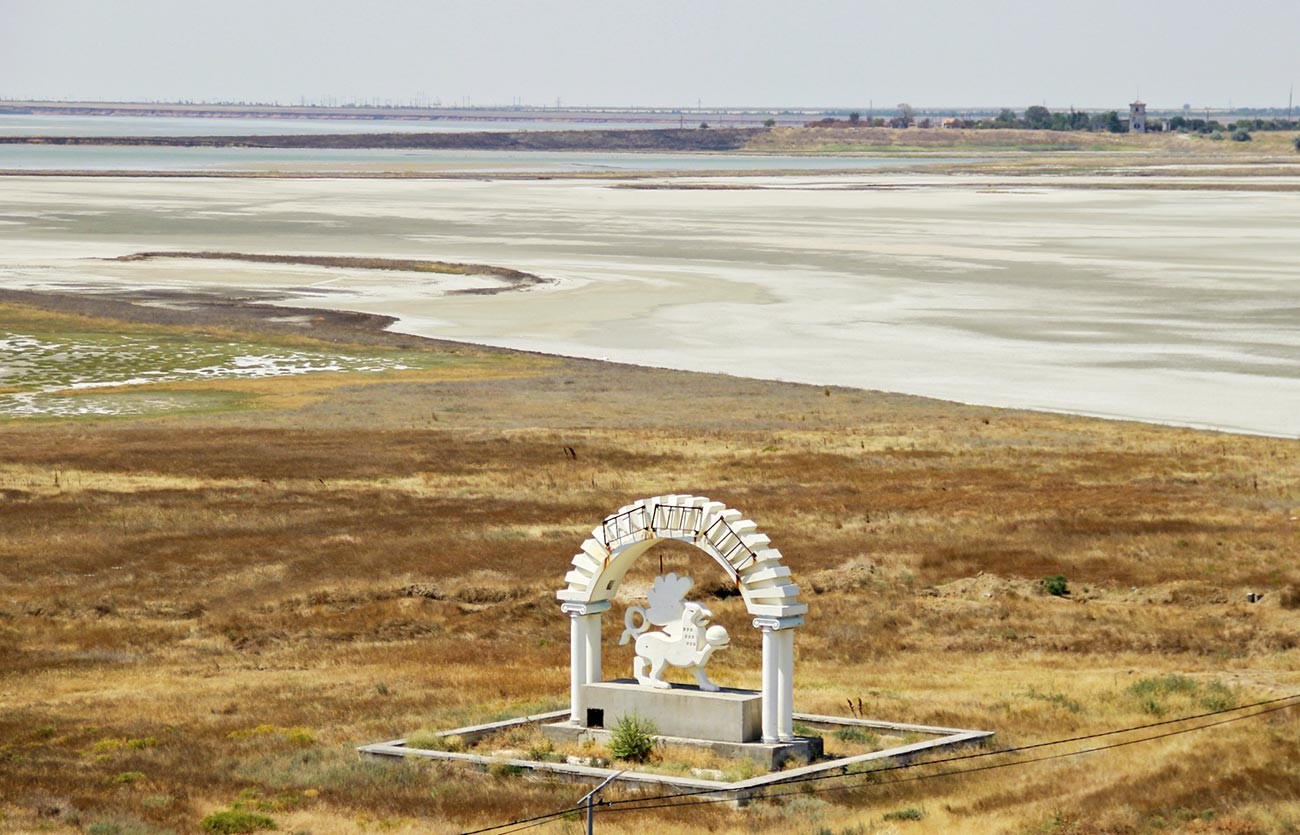 The main part of the border runs along the Bryansk, Kursk, Belgorod, Voronezh and Rostov regions. While there are still territorial issues between Russia and Ukraine related to the status of the Republic of Crimea, since 2014, Russia also has a border with Ukraine that runs through the Sivash Lake up to Armyansk. 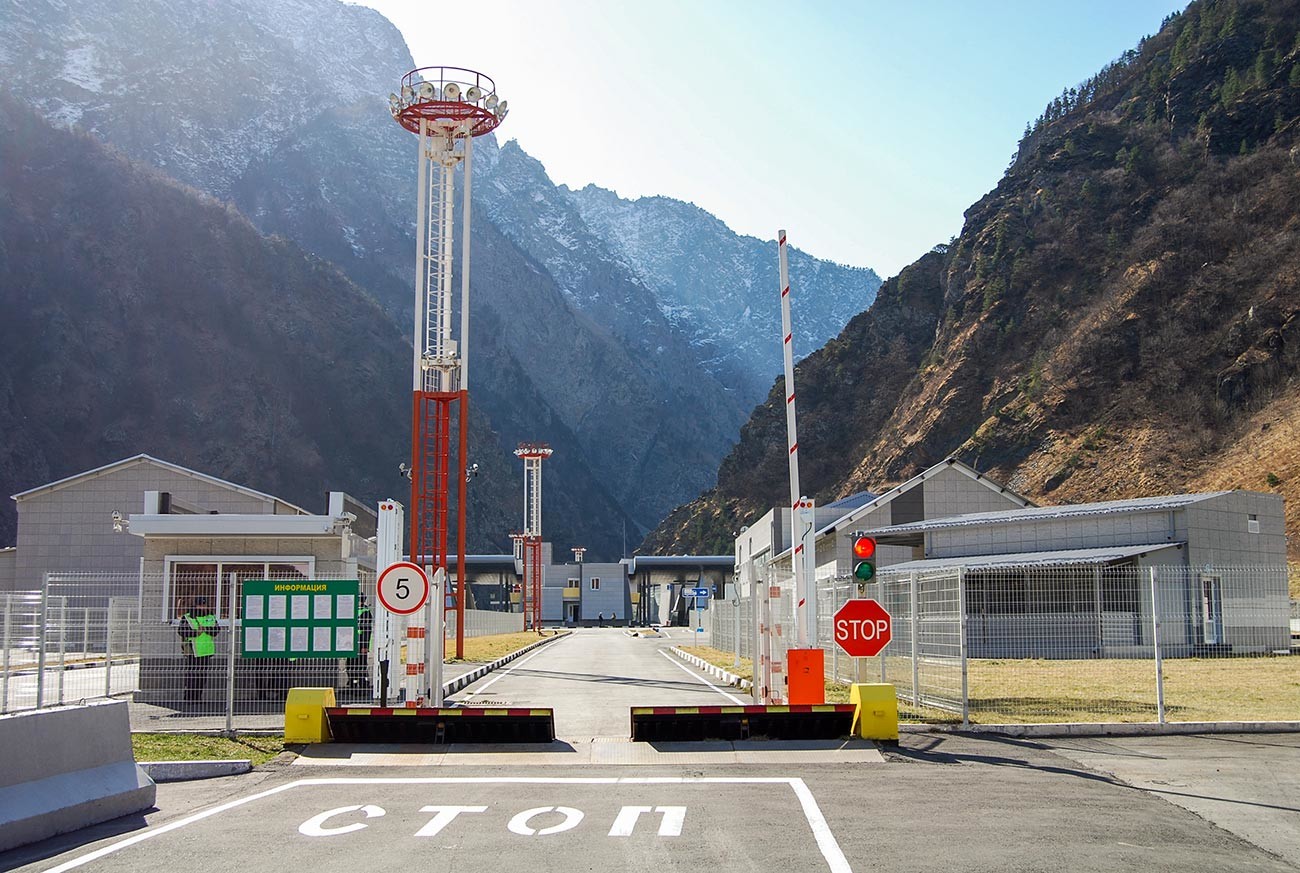 In 2008, when Russia recognized the republics of Abkhazia and South Ossetia that separated from Georgia, only one checkpoint remained between Russia and Georgia on the Georgian Military Road. From the point of view of Georgia, the borders didn’t change after the collapse of the USSR. 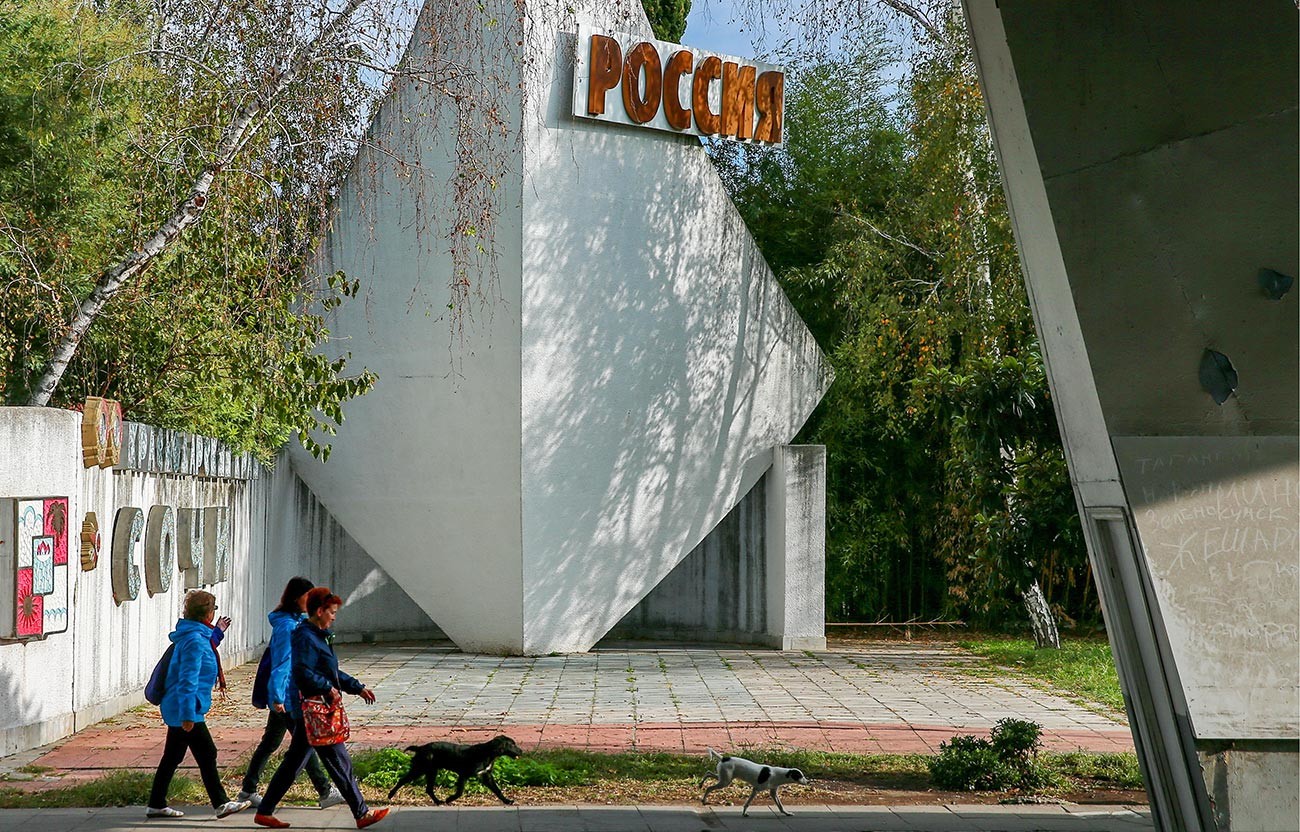 The border passes near the Russian Black Sea city of Adler and locals can cross it without visas or passports. And they can do so on foot, by train and by car. Residents of foreign countries, however, are not allowed to cross this border.

Getting from Russia to South Ossetia is possible only via the Trans-Caucasian highway or several mountain passes. Pedestrian crossing of the border is prohibited.