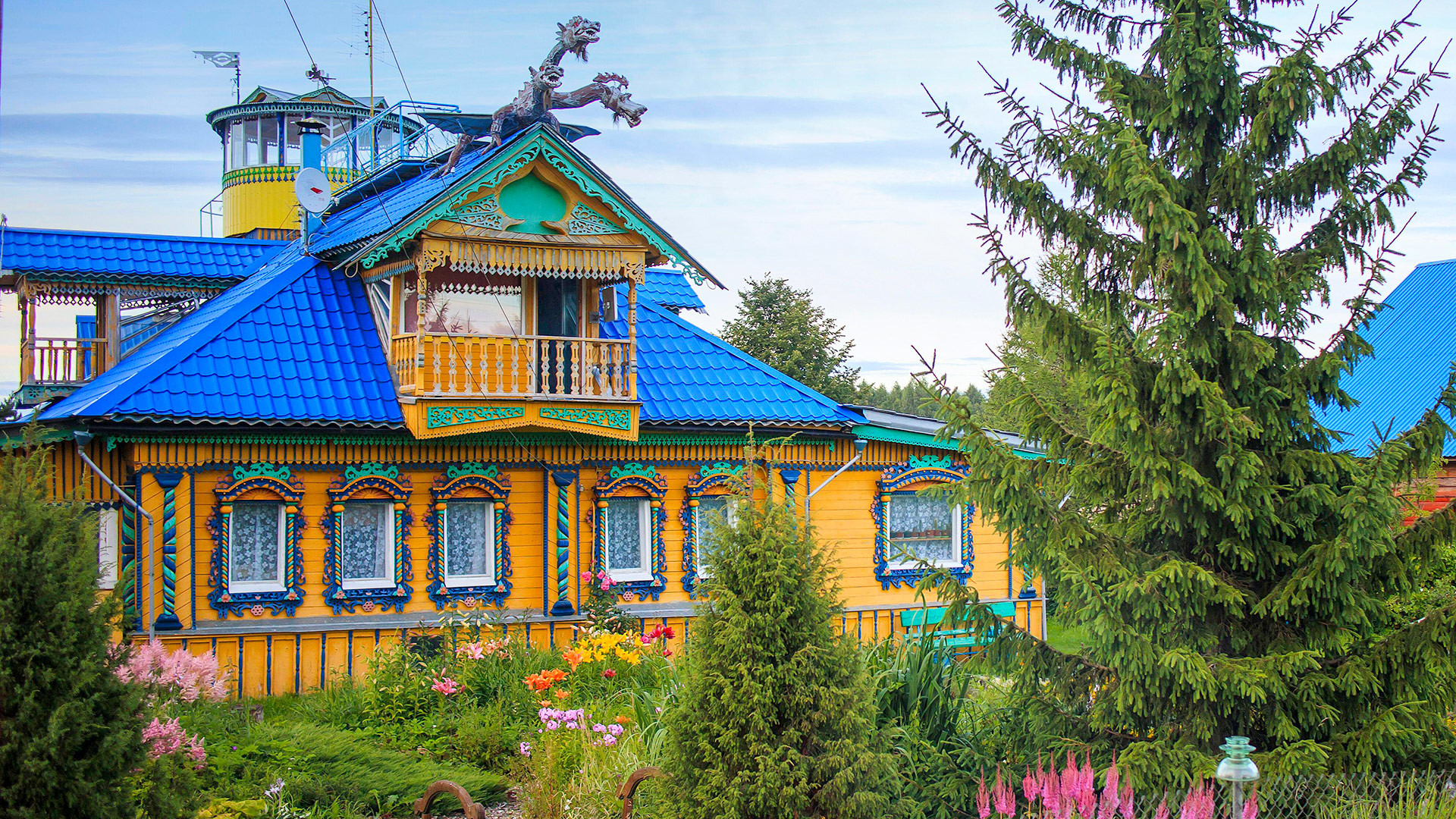 Wooden house with a dragon in the village of Durasovo.

Legion Media
Some people in Russia still live in traditional wooden houses called 'izbas.' But not all 'izbas' are created equal, and the owners of these ones have turned their homes into veritable mansions. 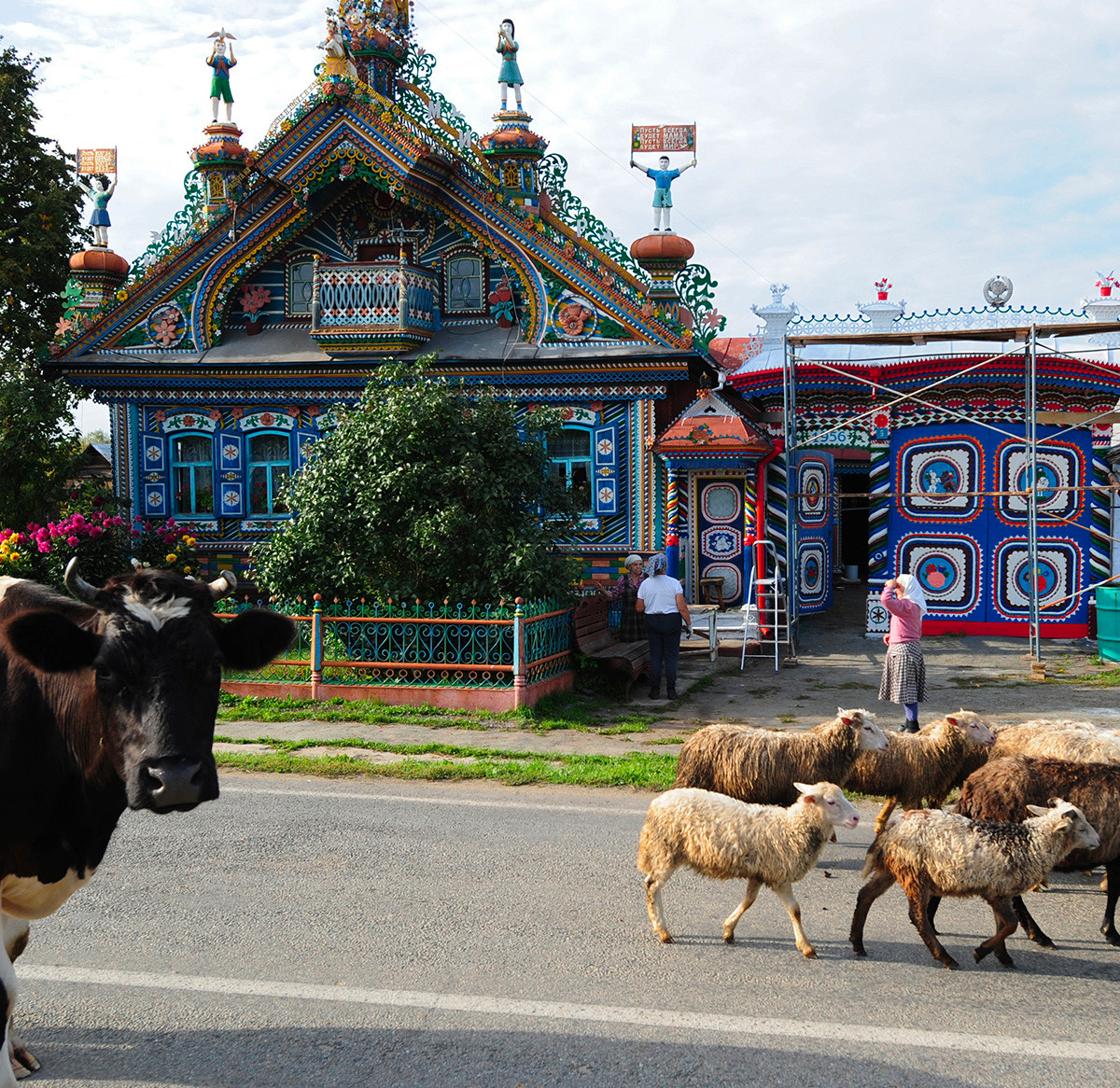 The small village of Kunara has become famous throughout the country thanks to an unusual house belonging to the family of a local blacksmith named Sergei Kirillov. Kirillov worked on the house’s appearance from 1954 to the end of his life. The house is adorned with nalichniki—carved window surrounds—as well as colorful floral ornaments and Soviet symbols such as young pioneers and red banners with the slogan "Peace to the World," featuring a profile of Vladimir Lenin in the center of the facade.

The owner passed away in 2001, but his widow, Lidiya, continued living in the house and welcoming guests. In 2018, at the request of local journalists, the authorities recognized Kirillov's House as a regional cultural heritage site. 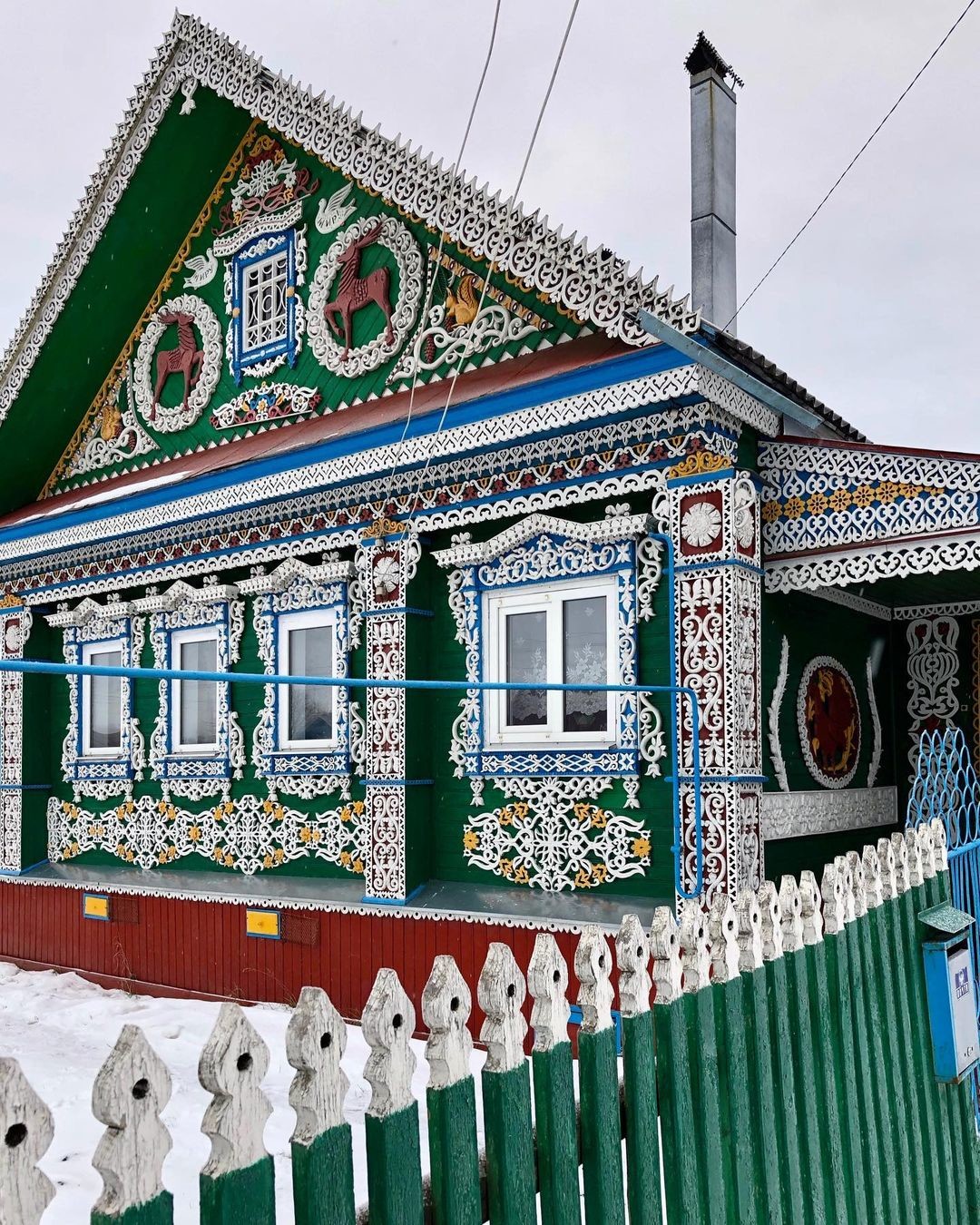 The village of Purekh in the Nizhny Novgorod Region is well known for its houses with carved window surrounds and facades. Many Purekh residents used to work at the local furniture-making factory and are skilled in woodworking. You will find the most interesting buildings on Lugovaya Street.

This green-colored house with figures of deer belongs to the family of a cabinet maker named Nikolai Kaloshin. He worked on decorating it from the early 1970s until his death a few years ago. Thanks to travelers and bloggers, the house has become well known throughout the country. 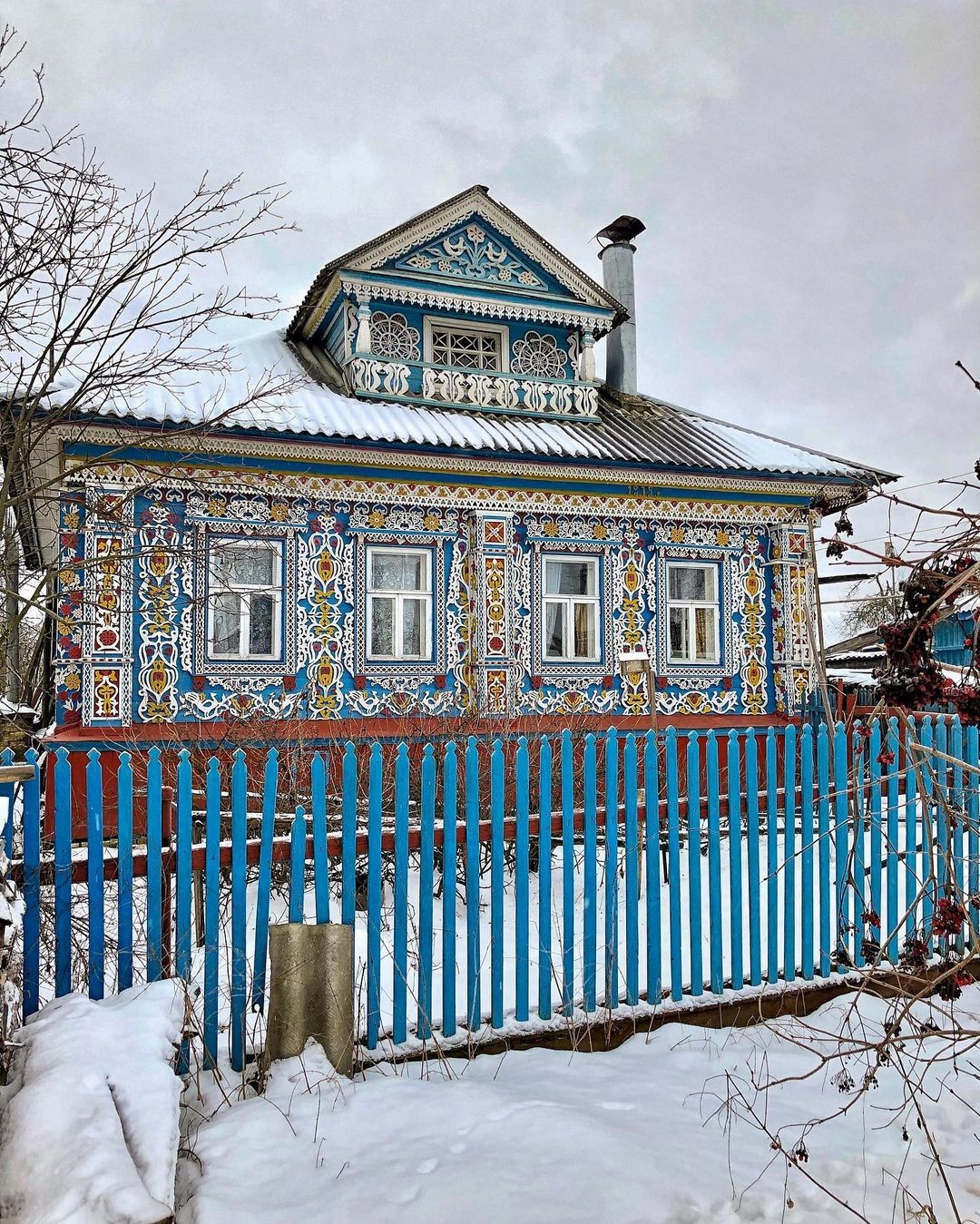 Near Kaloshin's House you can find another veritable terem—a luxuriously decorated wooden house—in which Konstantin Shesteperov, another cabinetmaker, lives along with his family. He is almost 90 years old now. The house’s blue façade is decorated with fairytale birds and sea monsters. Shesteperov says it took him three winter months to finish decorating his home.

4. The house with the dragon, Yaroslavl Region 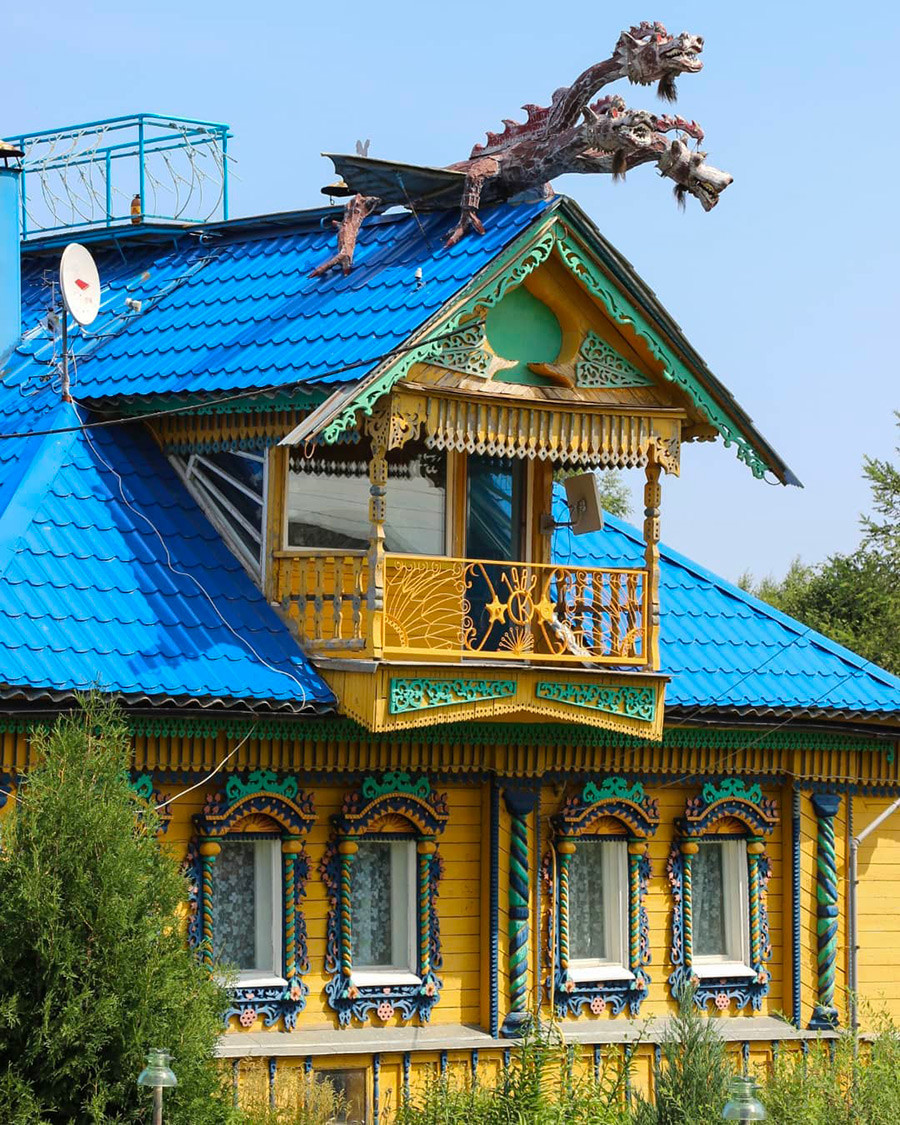 This house in the village of Durasovo has belonged to carpenter Nikolai Krylov since the 1980s. He dreamed of becoming an artist, and this is how he has made this dream come true. He rebuilt practically everything in the house with his own hands. First, he installed a revolving veranda on the roof, so that guests could enjoy the surrounding views. Then in 2011 the figure of Slavic fairytale serpent Zmei Gorynich, with his iron scales, appeared on the house. "Before that, I had spent another two years carving the heads. As for the body, I didn't have to carve it at all. I found the right pieces of wood, which fit together like a construction kit," Krylov explained. At night, the dragon's eyes glow with red lights. 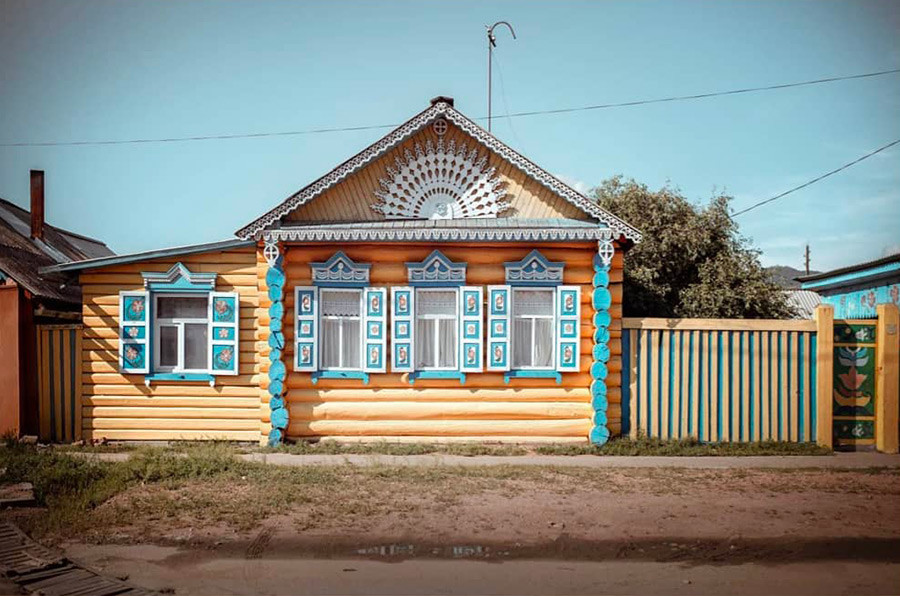 In Buryatia, there is a village called Tarbagatay where descendants of Old Believers live. It is included in the Association of the Most Beautiful Villages of Russia. Here, you will feel an incredible contrast with other Buryat villages, where the population is primarily Buddhist. 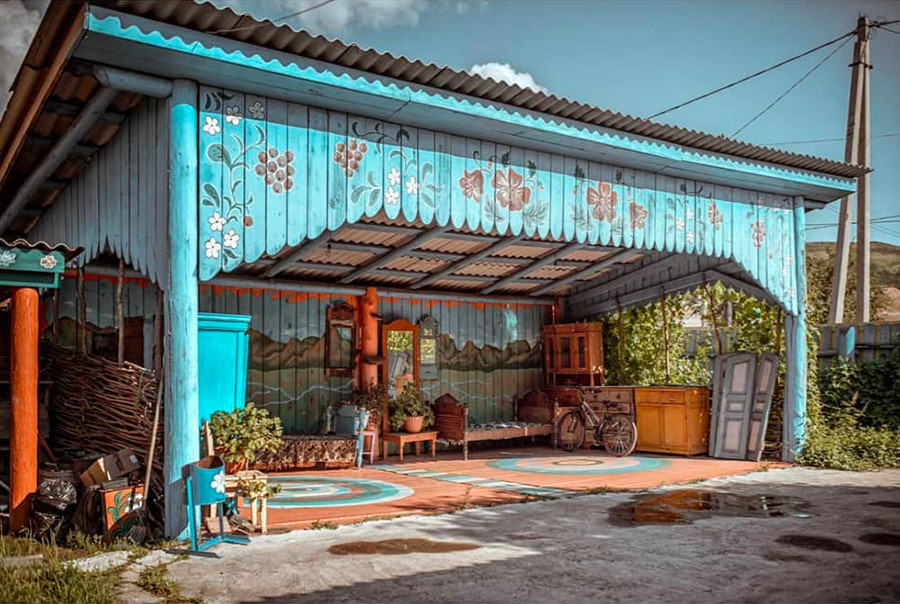 The Old Believers settled in Tarbagatay in the 18th century, and now the village even has an ethnographic museum dedicated to its history. But really it is much more fun to just look at the local wooden houses: Even the modern ones are painted bright blue, green and yellow, and adorned with shutters featuring floral ornaments. Elderly locals from Old Believer families still wear old-fashioned costumes and ornaments in everyday life.

Ivan Khafizov, the founder of the website Nalichniki.com, travels around Russia in search of unusual nalichniki (window surrounds). He found this house near the town of Shatura in the Moscow Region. The house was built in the 1930s, but its owner, Viktor, only began decorating it in the 1990s. "I like looking at nalichniki,” Viktor says. “They give the house a certain ‘attire,’ as it were, making it look like a bride. They make it look very beautiful."

In addition to making the carved facade with his own hands, he also built all the wooden furniture inside himself, including the table, chairs and armchairs. Everything is made from oak. Even the samovar! 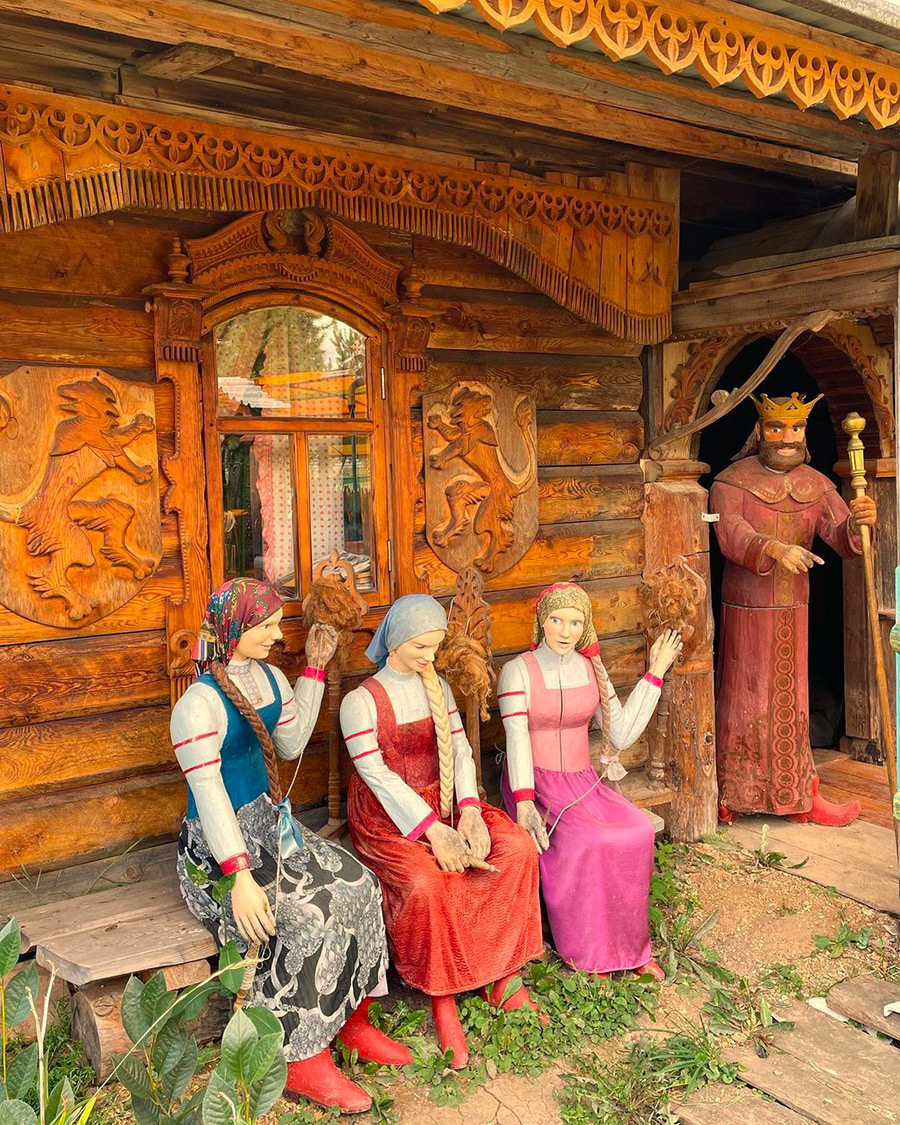 The settlement of Visim is the birthplace of Russian writer Dmitriy Mamin-Sibiryak, but curious tourists are also drawn here by a wooden house that is bursting with fairytale characters. The house belongs to Vitaly Cherepanov. He used to work as a metal worker in Nizhny Tagil, but after retirement he and his wife bought this house in the quiet village of Visim and he took up wood carving. 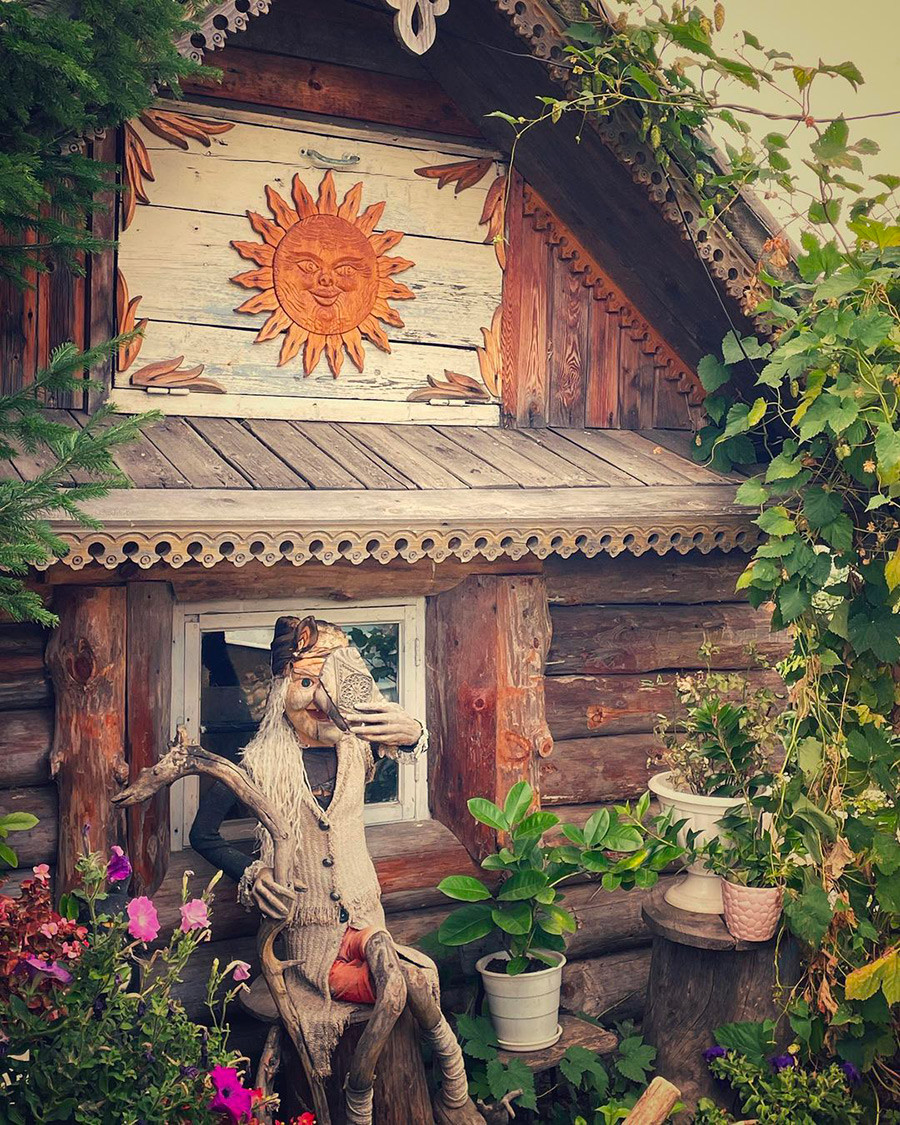 Using gnarled tree stumps, he began carving characters from Russian fairy tales and Soviet cartoons. Here you'll find Uchony the Learned Cat, the Postman Pechkin and the fox from Ivan Krylov's fable who is waiting for a crow to drop a piece of cheese. On top of it all, Cherepanov even built a wooden carriage for his wife! 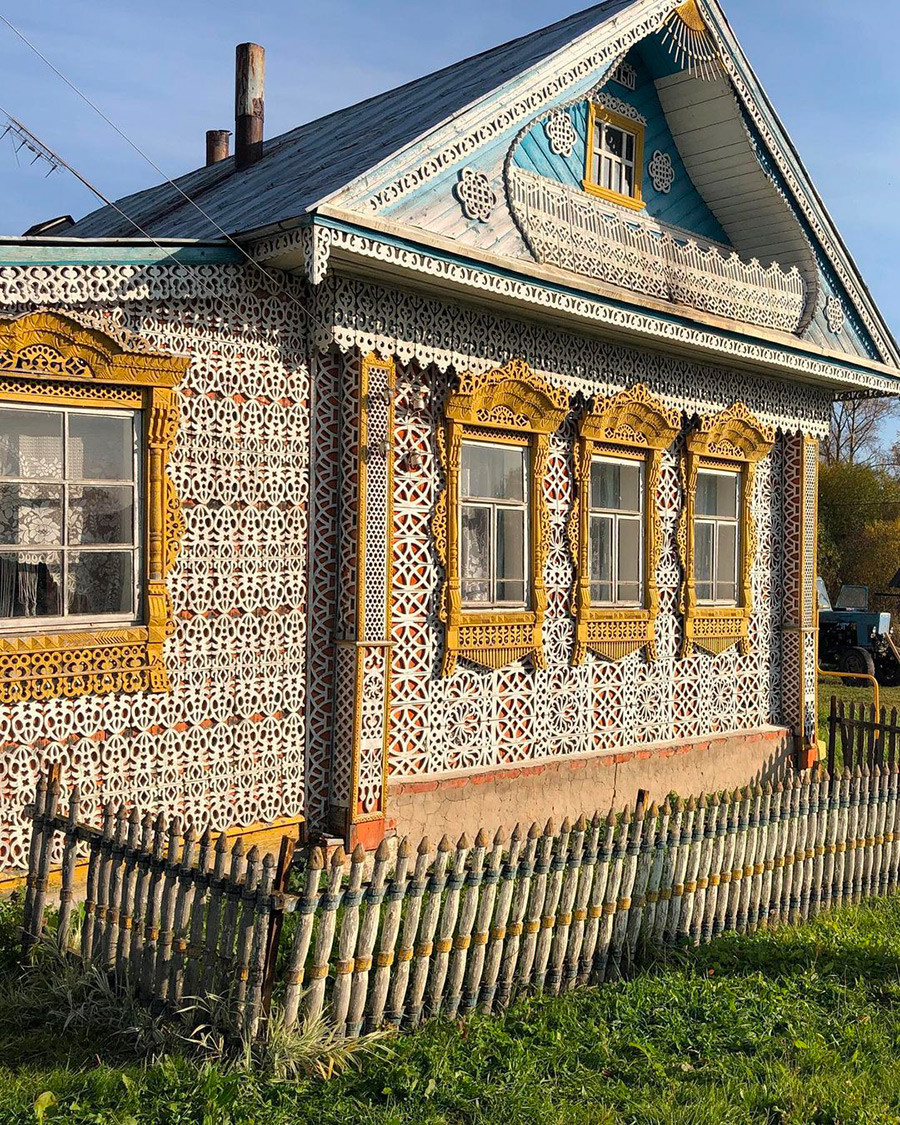 The openwork house appeared in the village of Soimitsy in the 1960s. Created by Konstantin Muratov, it became one of the most well-known buildings in the region during the Soviet period and was photographed by journalists from leading newspapers and magazines. Muratov worked as a cattle farmer on the local collective farm, but he spent evenings carving in his workshop. The carved facade of his house is reminiscent of the patterns made by frost on windows, and there are images of birds and fish from Russian fairy tales. After he had decorated his house, his neighbors began asking him to help decorate other houses in the village, and in the end Muratov wound up carving dozens of window surrounds. He died in 2011, but his widow Alevtina still lives in the house. 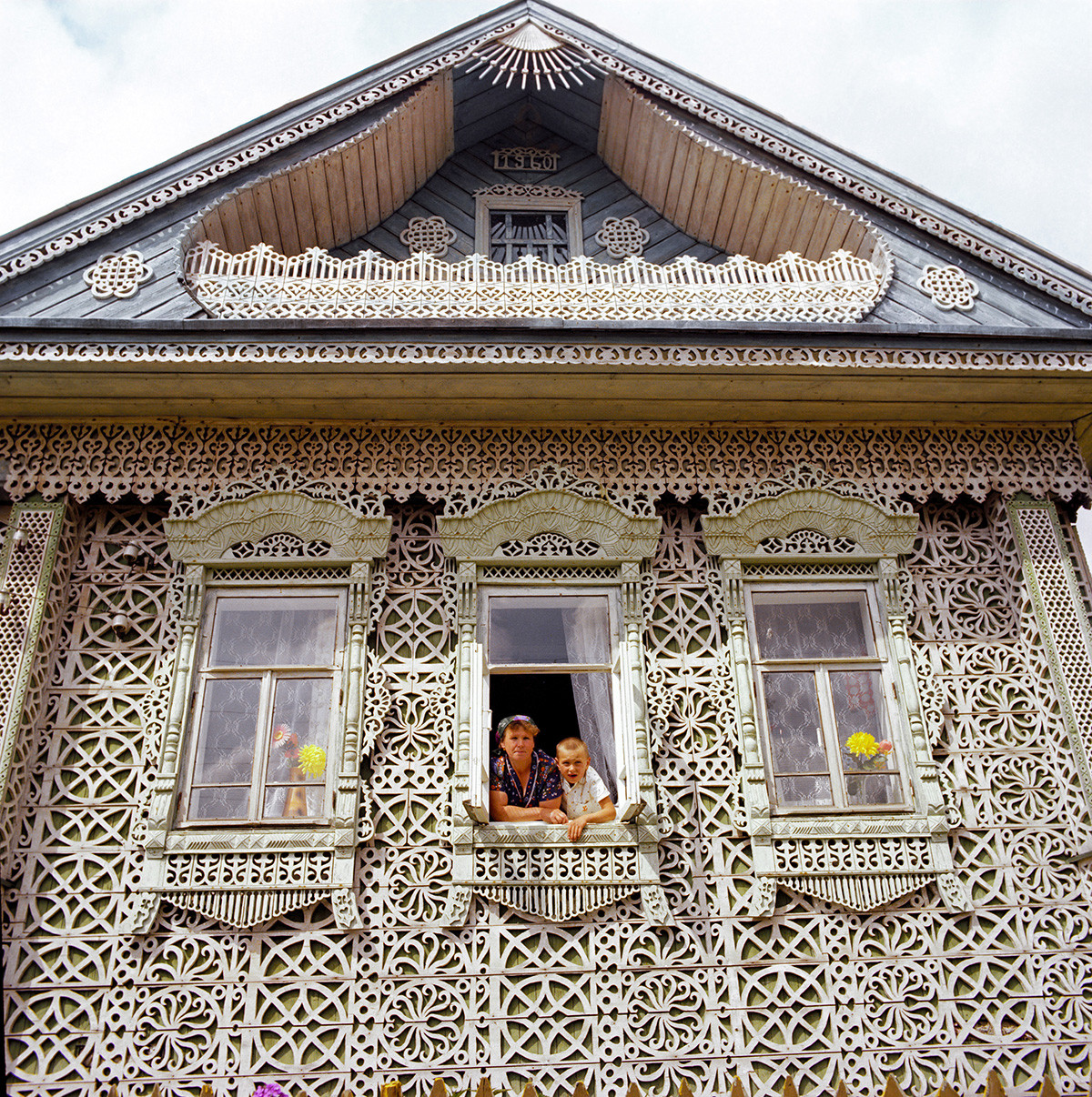 This house in the small settlement of Palekh belonged to a family of collective farmers. Palekh is known as the birthplace of lacquer miniature painting, and working as an artist is still the most popular profession here, with one in eight local residents earning their living as lacquer miniature painters. Here you can see skillfully decorated houses, both old and new. The house with the openwork facade appeared in the 1980s and is regarded as a local tourist attraction. 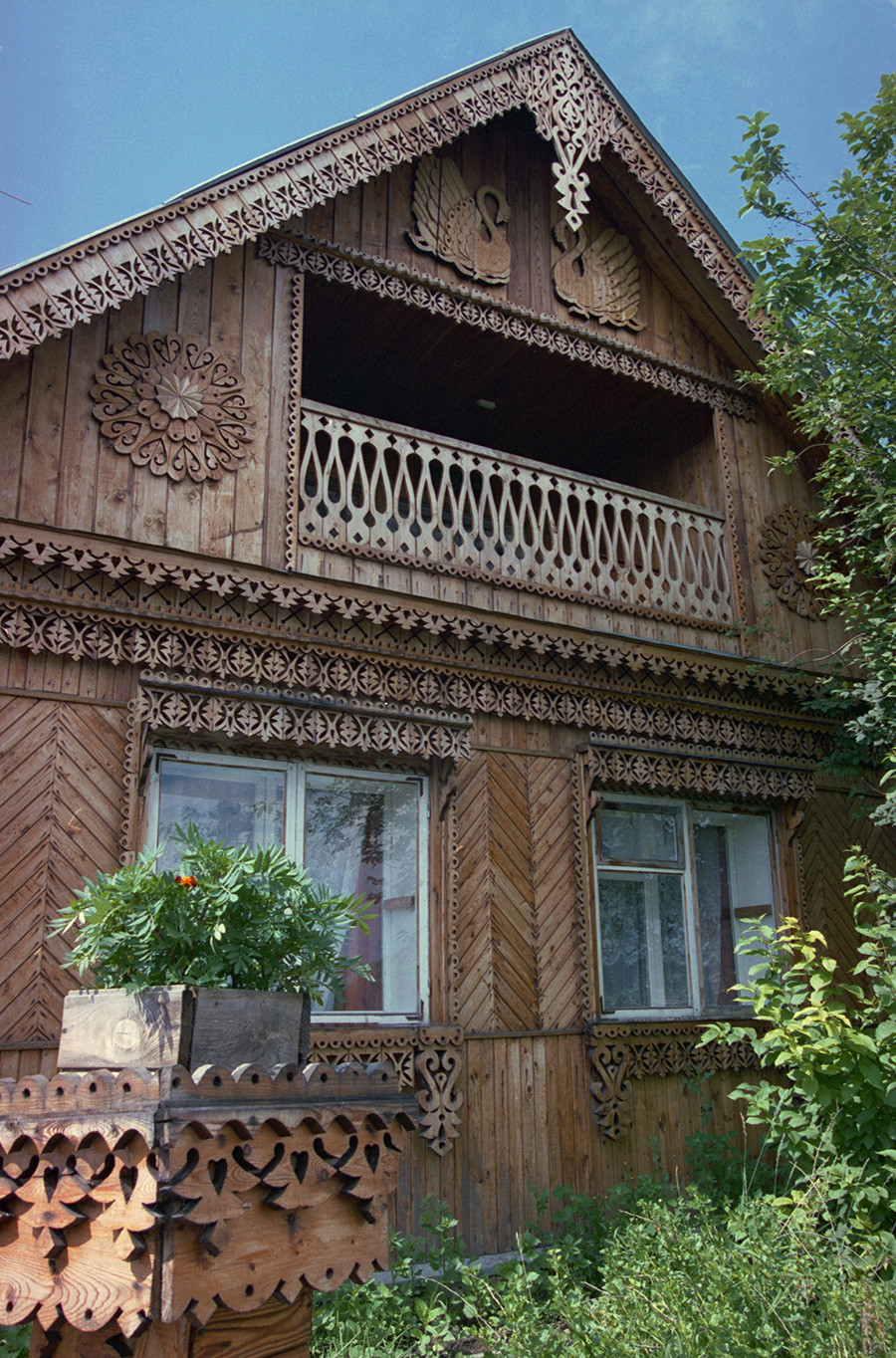 Don’t make the mistake of thinking all master wood craft workers in Russia are men. Natalya Makarova is a craftswoman from the town of Yalutorovsk. In the mid-1990s, she adorned her house with wooden swans and carved window surrounds. With just a little bit of looking around, you will start noticing there are craftspeople all over in villages throughout Russia!