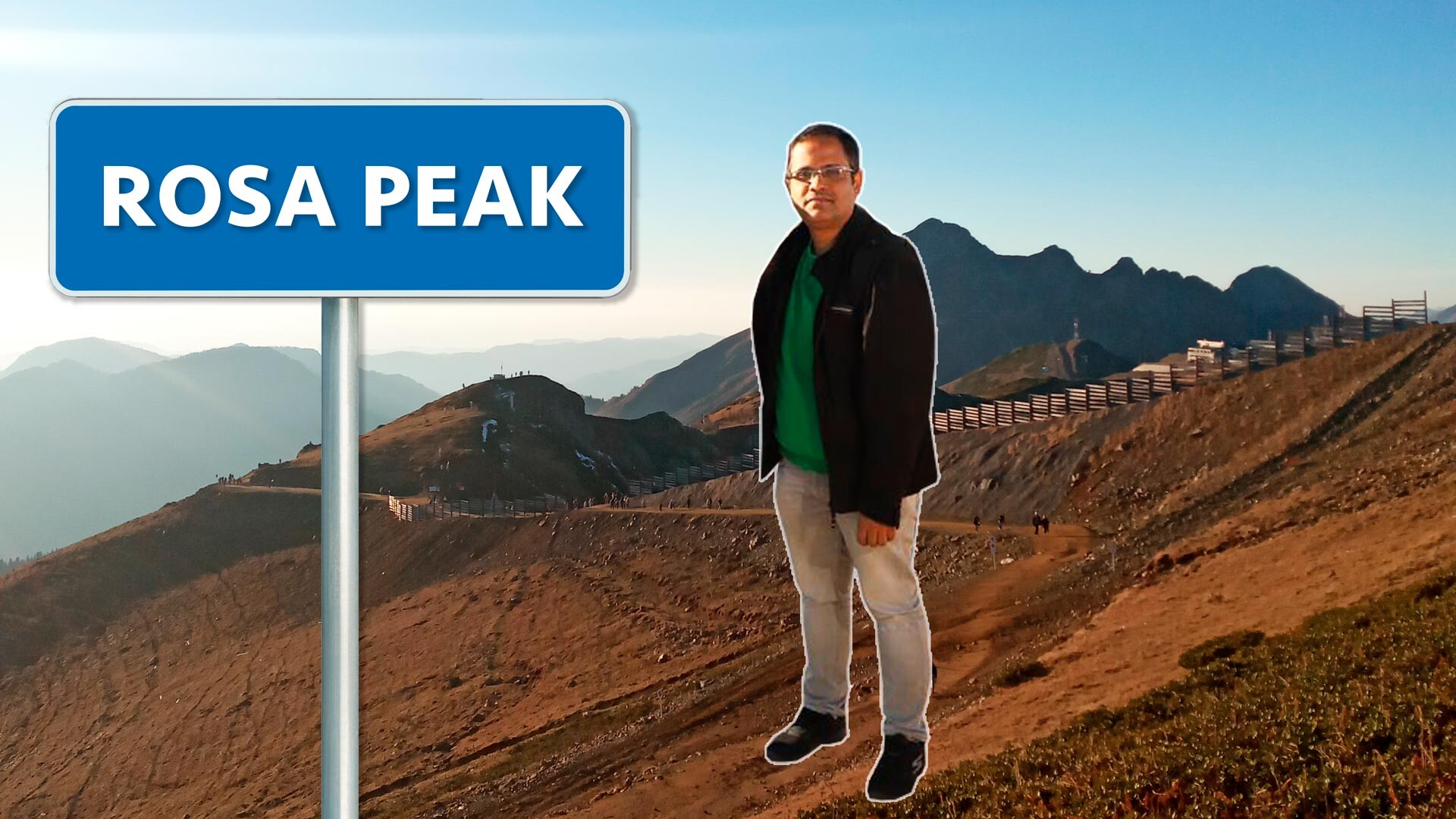 Personal arhive
In our ongoing series on pandemic travel in Russia, our contributor this time heads off on a day trip from Sochi to the Rosa Khutor ski resort, which hosted several events of the 2014 Winter Olympics.

From a subtropical resort to… ski slopes

Tourist websites and brochures from Sochi often mention how a visitor can ski or snowboard in the mountains of Krasnaya Polyana and then spend the latter part of the day walking in an alley full of palm trees near the relatively warm Black Sea. Unless you really only have “just” a day in Sochi, I wouldn’t advise this, since you’d end up doing no justice to either place. In the off-season, you can easily spend a few days in Krasnaya Polyana, but due to time constraints I was forced to choose a day trip from Sochi, but at least I did not have to divide my day between the two places. All I really wanted was a proper glimpse of the Western Caucasus mountains.

How to get to the mountain peaks by an electric “swallow” 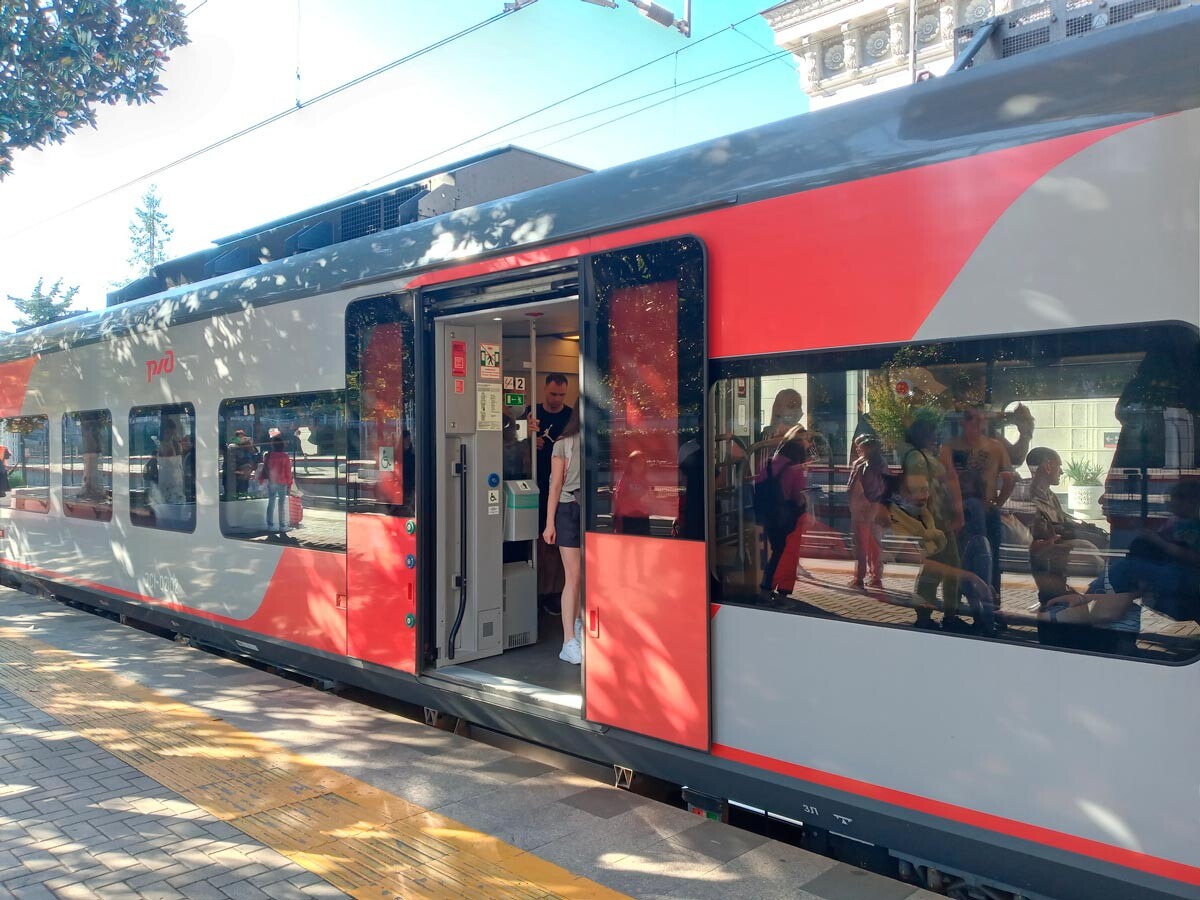 Conventional wisdom would have called for my friend and I to leave for Krasnaya Polyana as early as possible from Sochi, taking a train at 8 am from the city. However, since she was taking her two children (an 8-year-old and 12-year-old) with her, any such plan of getting to the mountains before the tourist crowds arrived seemed like a pipe dream. We managed to reserve tickets on the Krasnodar-Rosa Khutor intercity ‘Lastochka’ train (which literally translates as “Swallow”, the bird). Before moving on, let me just clear the confusion that many have about Krasnaya Polyana and Rosa Khutor. The former is an urban-type settlement that is home to about 4,600 residents, while the latter is an alpine ski resort that was constructed between 2003 and 2011 specifically for the 2014 Winter Olympics. The railway station, though, is also called ‘Rosa Khutor’.

Our train arrived in Sochi exactly on time. Russian Railways has deployed several ‘Lastochka’ suburban trains on this route. These electric multiple unit trains that are manufactured by Siemens and Ural Locomotives are absolutely world class and nothing like the old green ‘elektrichkas’ that made up with character for what they lacked in comfort. From Sochi the train runs parallel to the Black Sea coast up to Adler (a beachside district known for being home to the Olympic Park) and, from there, begins the journey from sea level to the base of the Aibga Ridge (a mountain ridge in the Roza Khutor plateau).

The 48-kilometer-long Adler-Rosa Khutor line is one of Russia’s new engineering marvels. It was built in time for the 2014 Winter Olympics and passes through rivers and gorges. It rides over 37 bridges and overpasses and has 10 kilometers of tunnels, with the longest one stretching for more than four and a half kilometers.

An hour and 20 minutes later, we were in Rosa Khutor, excited about seeing the Caucasus Mountains for the first time. We had literally travelled from the Black Sea coast to a height of 560 meters above sea level.

To feel like in the Alps without leaving Russia 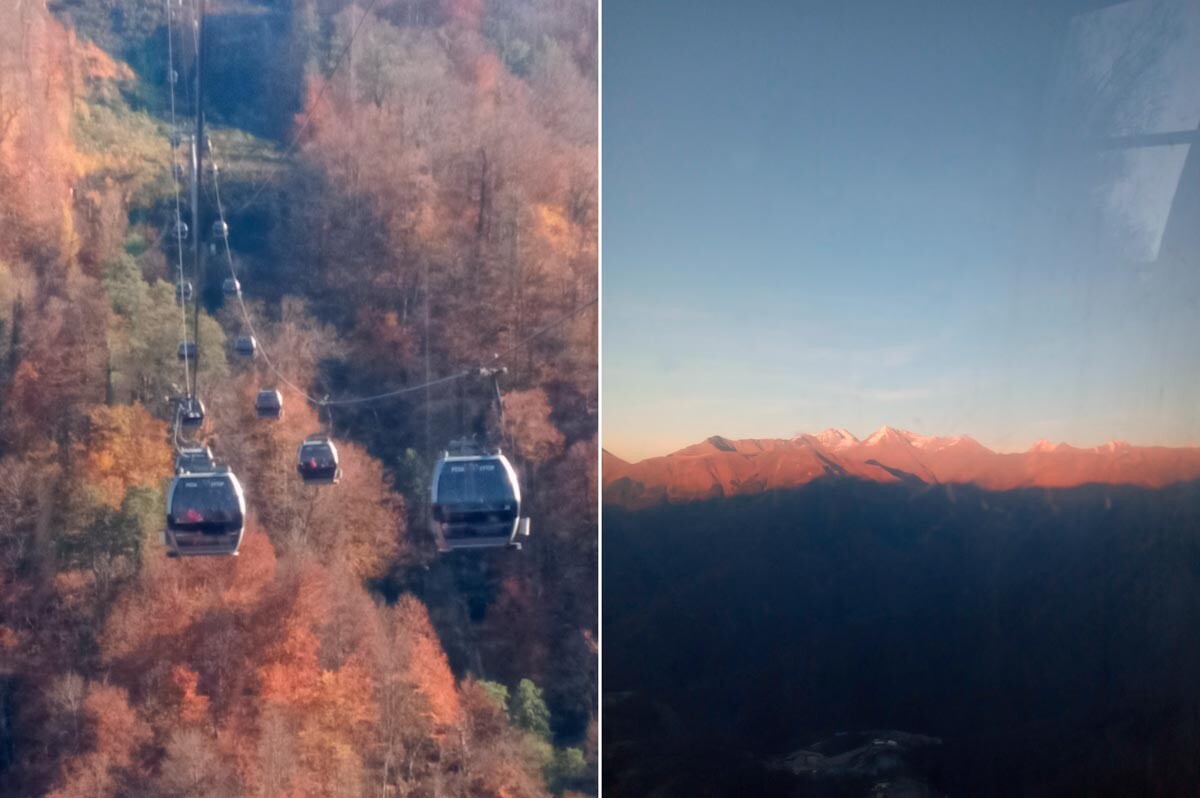 There is literally nothing to do at or near the Rosa Khutor railway station, except buy tickets for the cable car to the Rosa plateau and peak.. In a bid to encourage more families to visit, the family ticket (ideal for a family of four) works out to be more economical. A free shuttle bus ferries visitors to the main Rosa Khutor resort, which is a few kilometers away.

Not having seen any pictures of Rosa Khutor, I felt a distinct sense of shock when we arrived there. Given how red the valley looked in the fall, Rosa Khutor (“Rose Valley” in Russian) was a perfectly appropriate name. Some parts of Sochi look very Italian, but you still feel you’re in Russia. Rosa Khutor, on the other hand, looks and feels like a part of the Swiss Alps. The colourful architecture and well planned street by the Mzymta River add to this Alps-type ambience. The prices at some cafes and restaurants are also very “Swiss”! 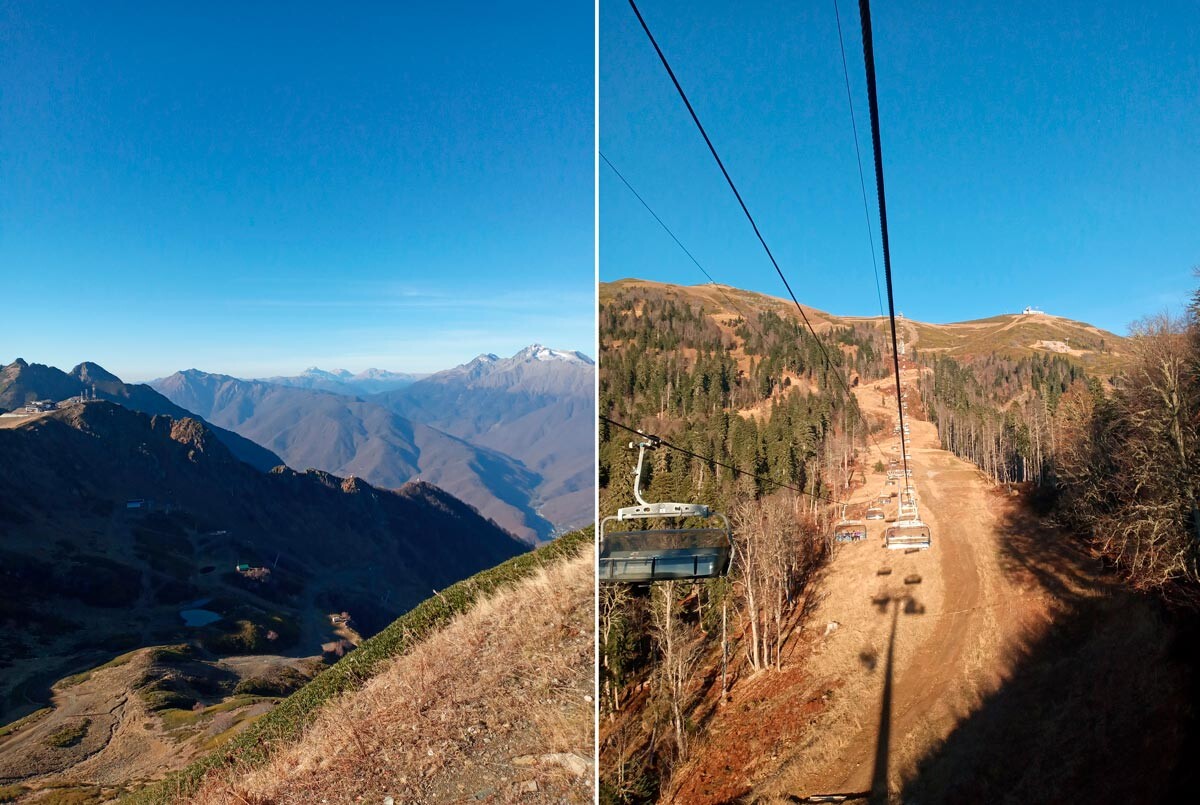 We took our day trip to the city in the first week of November, when there was a week-long holiday across Russia. The combination of this break and pleasant weather in the region meant there was a serpentine line for the cable car. There was an absolute lack of distance between people in the line and not a single person wore a mask.

Thankfully, the line moved quickly and we did not have to wait too long before getting in the next available cable car. The ‘Caucasus Express’, as the cable car is called, takes you to the Rosa Plateau, which is 1,170 meters above sea level and, from there, you can go to the Rosa Peak (2,230 meters above sea level). In the off-season, it’s best to arrive early and get off at Rosa Plateau and go trekking on one of its trails. A few families that were in the line for the cable car came ready with food, water and warm clothes to go on a long hike. Our main aim, though, was just to get to the top and see the snow-covered peaks. And the view from the top is nothing short of stunning!

My friend’s children were thrilled to walk on a hanging suspension bridge by the peak. Protective equipment was provided and everyone insisted it was safe, but I did not feel at ease until both of them finished what, to me, looked like an agonisingly slow and perilous walk!

The cable car ticket also allows you to take a ride on a ski lift from Rosa Peak to an area that is famous for waterfalls. Unfortunately, the crowds swelled up so much on the day we were there that we weren’t allowed to get off the chair lift and it turned into a joyride from the top to the bottom and back up again. With the craze to take photographs and selfies, stories of people dropping their phones from the ski lift are not uncommon. On our way back to the top of Rosa Peak, we jokingly asked a couple walking below whether they’d lost their phone and they replied with a serious look that they actually did drop it. Oops! 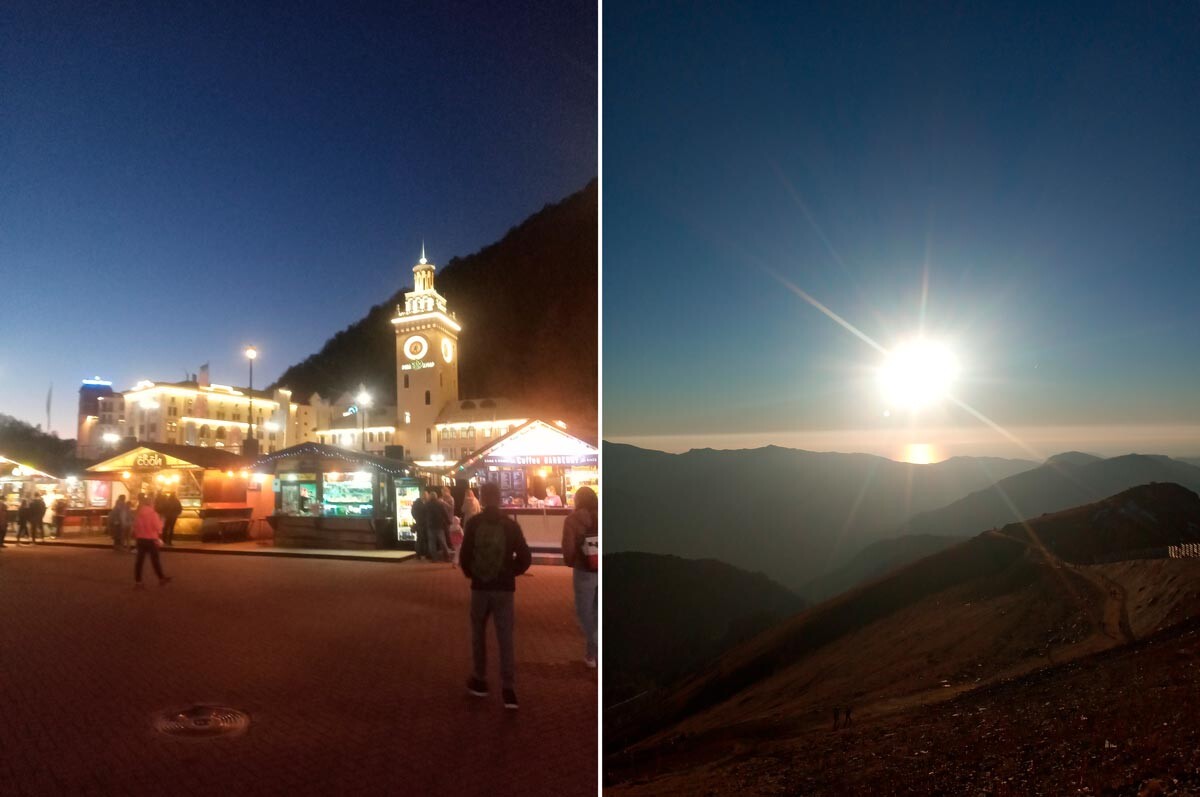 Our aim was to get back to Sochi in time for dinner, but, by the time we got off the ski lift, we realised that we were going to have the privilege of seeing the sunset by the Caucasus Mountains. The line to the cable car was like nothing I had seen before in 18 years in Russia. An hour after we got in line, we managed to get into a cable car and head down.

There was of course a surreal and haunting beauty about the sunset and the crimson twilight above the great mountains. We would have missed seeing this stunning sight if we had managed to leave early.

By the time we were back at base of the resort, the last of the free shuttle buses had left for the station and the next train to Sochi was 90 minutes away. We managed to buy food from a few stalls in the main square and soaked in our day with warm mulled wine. The illuminated buildings and clock tower made the resort feel even more European than in the morning. Most of the people who were desperate to leave Rosa Peak probably came in cars and buses since Rosa Khutor felt almost empty by the time we were done with dinner. Fortunately for us, there were enough tickets on one of the last trains to Sochi for the day.

After all this, I would definitely like to ski in the resort in the winter, but I have a greater desire to go back there with a group of nature enthusiast friends, who are ready to trek on the trails of Krasnaya Polyana in the fall. The beauty of the lower and middle ranges of those mountains in the season of colors has to be seen to be believed.