A one-day trip to Kashin, the town of ANCIENT churches and unexpected SPIRITS (PHOTOS) 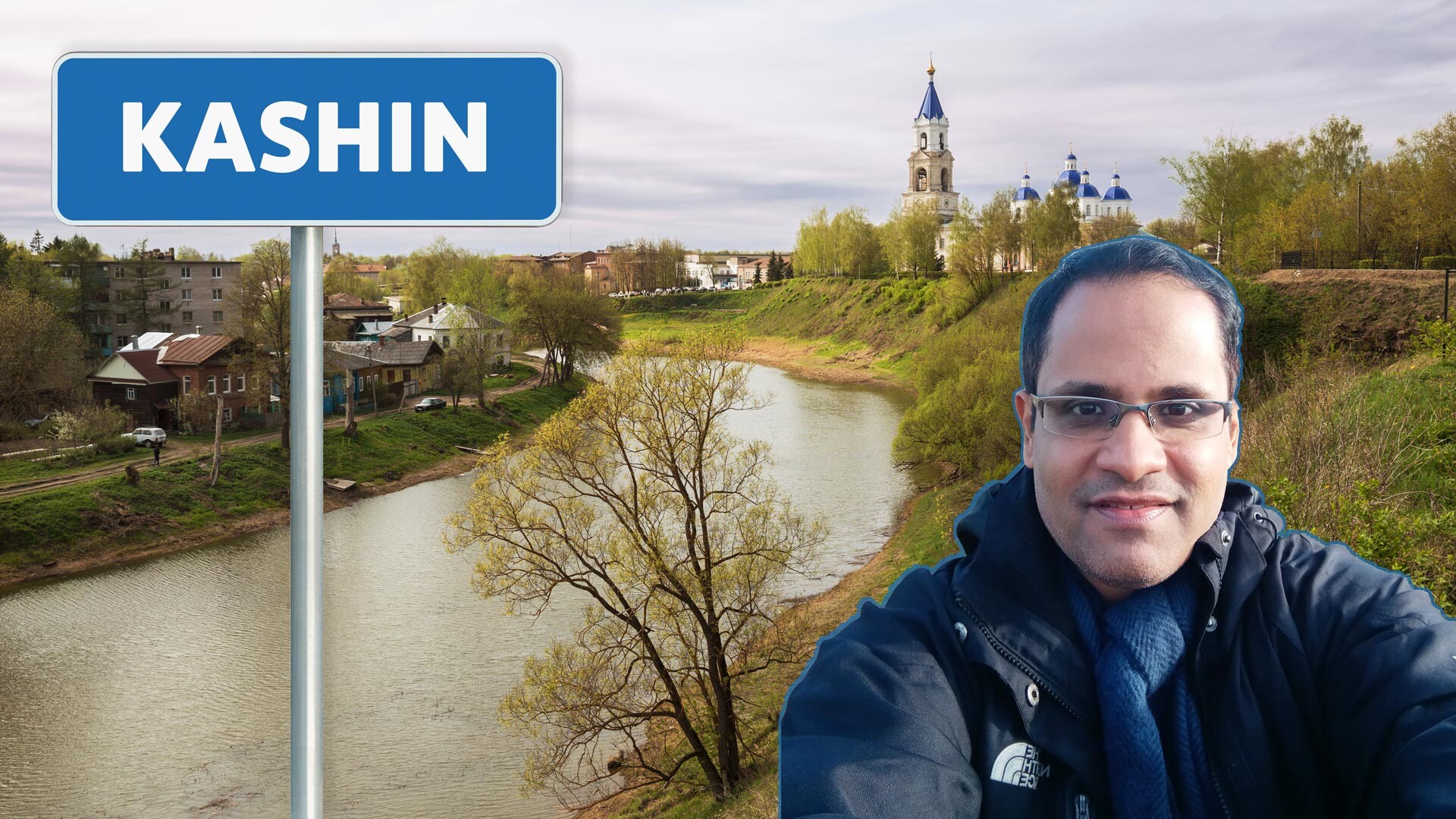 Russia Beyond (Legion Media, Personal Archive)
In this series on pandemic travel in Russia, our contributor visits some of the lesser-frequented areas between Moscow and St.Petersburg.

Drive away from Moscow 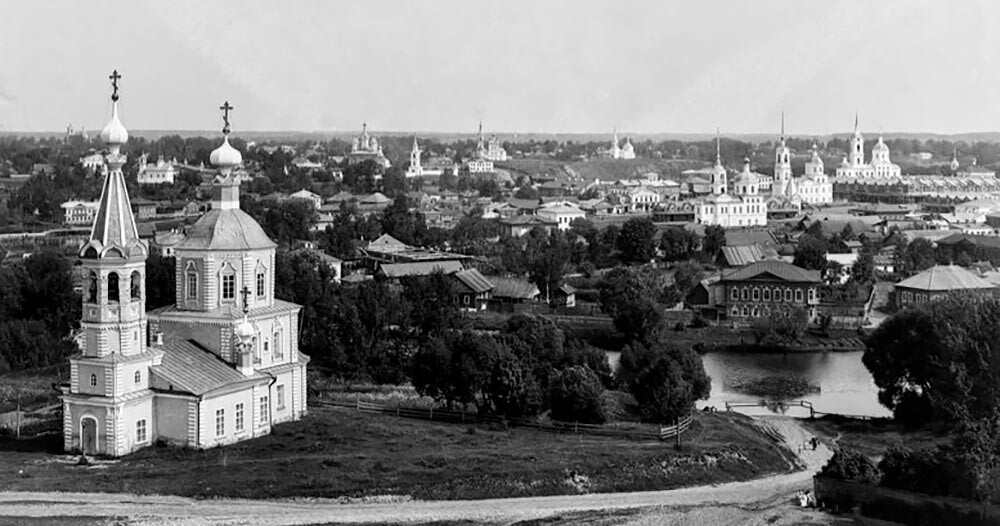 It’s 6 am on Moscow’s Tverskaya Street and there’s no sign of the traffic that is a trademark of one of the city’s busiest thoroughfares. I’m headed off on a 222-km journey to Kashin, an urban settlement (a generous name for a large village) of 14,000-odd inhabitants in Tver Region, with my travel companion and friend Victor Salamatov, who quit a corporate career to be a “bridge between his native Sakhalin Island and the rest of the world”.

The cloudy skies and gloom that pervade the Russian capital in the uncomfortable period between fall and winter follow me north, until it all seems to magically disappear at the border dividing the Moscow and Tver regions. Blue skies, sunshine and landscapes reminiscent of famous Ivan Shishkin paintings greet us on the other side. Unsurprisingly, it gets a lot colder as we head north into a region that is within striking distance of some of Russia’s fabled historic towns such as Tver, Rostov and Yaroslavl. 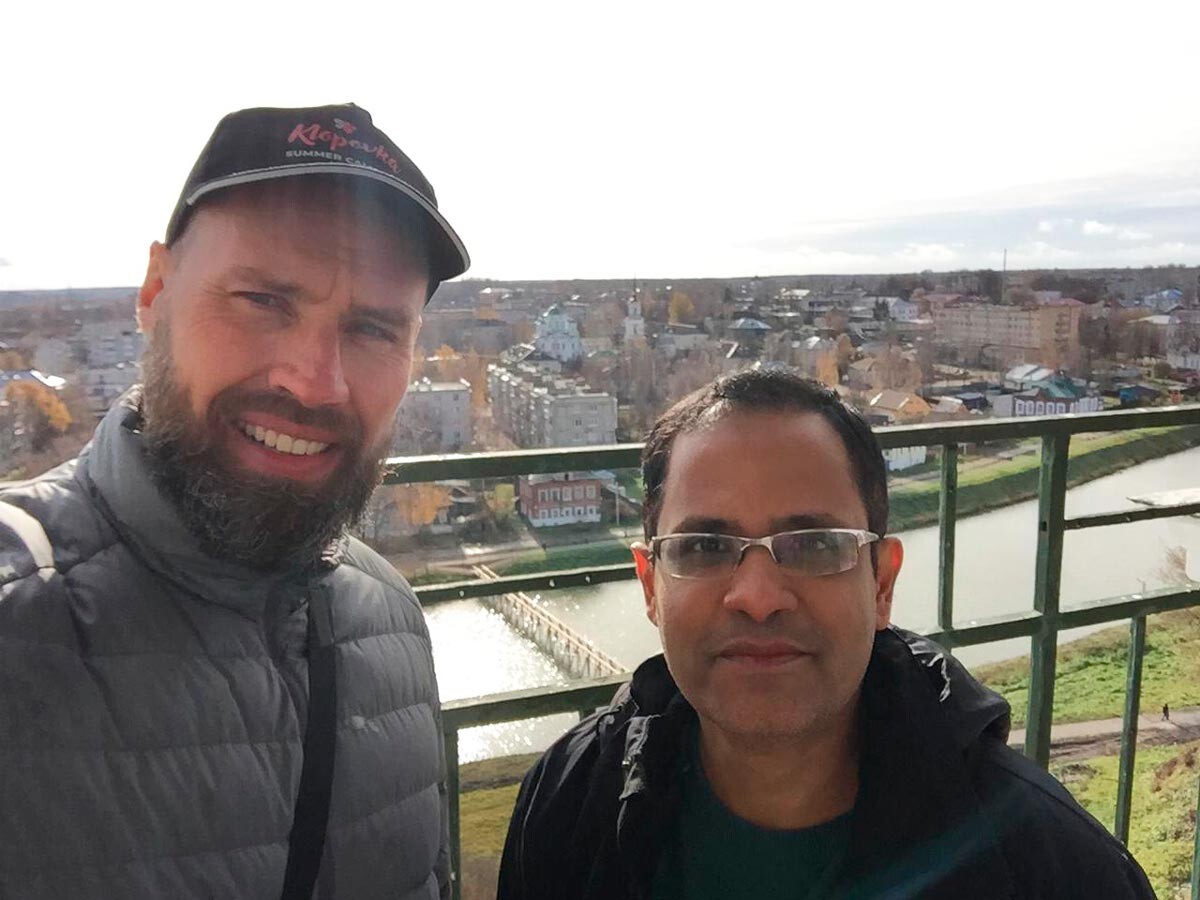 Ajay and Victor are at the top of the bell tower of the Resurrection Cathedral.

A little over an hour’s drive away from Moscow (which has a population density of 4,940 people per square kilometer) and one gets a feeling of the sheer vastness of Russia. There are large open spaces as far as the eye can see and few signs of human life besides small dachas, trucks and cars on the highway. 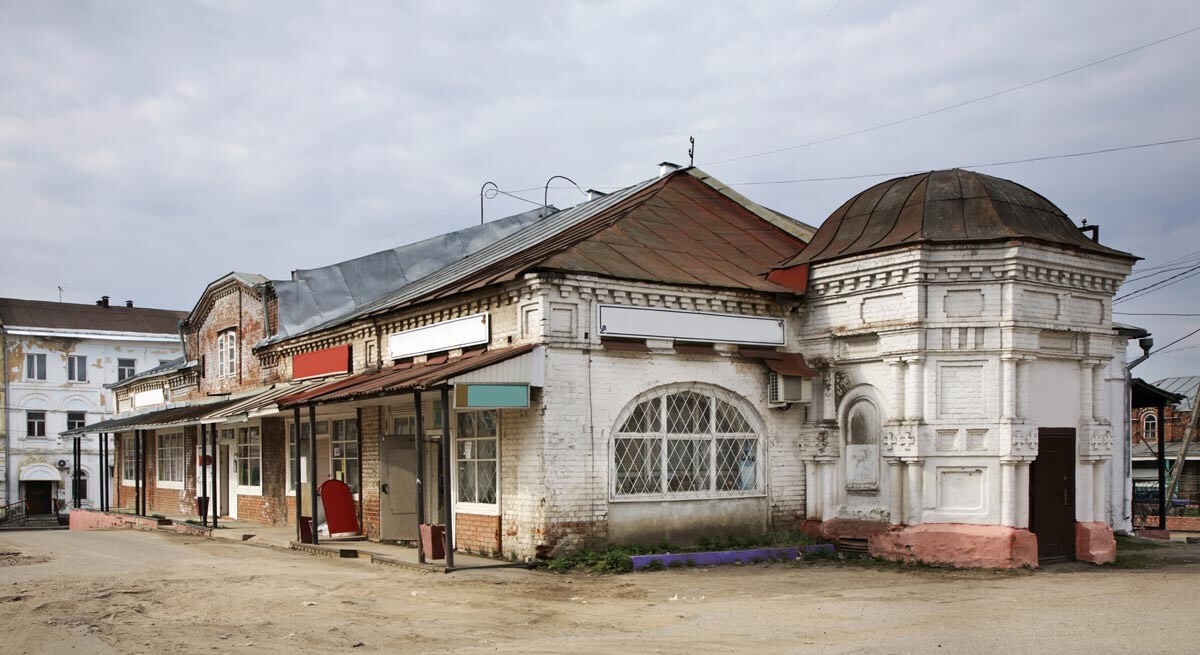 Kashin, which lies on the banks of the Kashinka, a small tributary of the Volga, is mentioned in historical chronicles from as far back as the 13th century. It survived ransacking by the Golden Horde, attacks by Polish Interventionists during the 17th century Polish-Muscovite War and changes brought forth by the Soviet Union. 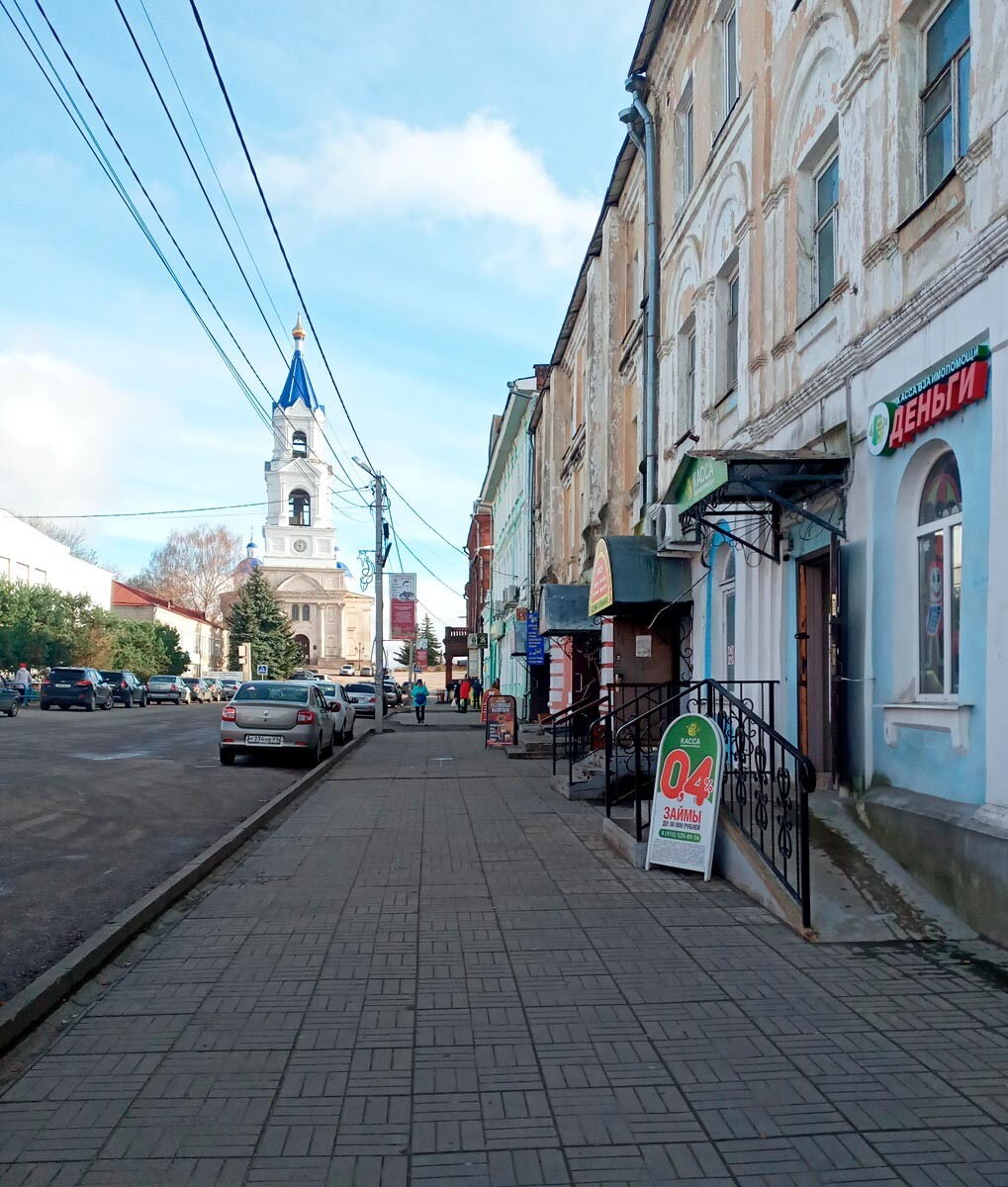 Kashin’s tranquil center that wraps around the Resurrection Cathedral has the feel of a Brothers Grimm fairy tale town. Surrounded by rich and fertile agricultural land, the town actually has 29 Orthodox churches. The market square, which is close to the river, hosts cultural festivals full of song, dance, food and drink. One of them is the ‘Festival Kashi’ (‘Porridge Festival’). According to one version, it’s to ‘kasha’ that the town owes its name. You can learn more about it and local traditions at Kasha Museum. 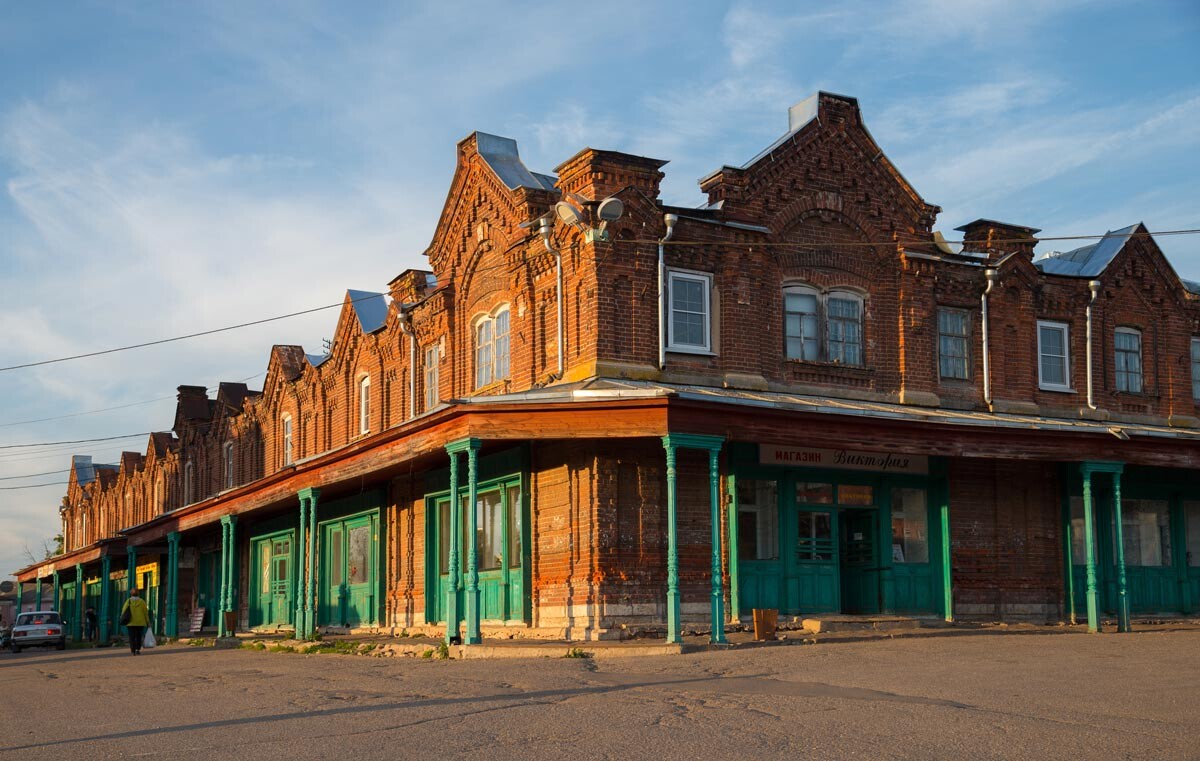 Well, there are spirits, but not the kind you may be thinking of! Another reason why Kashin is known beyond the confines of Tver Region is because it is home to ‘Veresk’ (‘Heath’) - an alcohol distillery that was founded in 1898. Along with liqueurs and gin, the company produces ‘Tverskaya’ vodka and another vodka brand that is named in honor of Tver’s most famous son - Afanasy Nikitin, the 15th century merchant and traveller, who went on a voyage from Tver to Persia and India. When Moscow hosted the 1980 Summer Olympics, Veresk produced ‘Tverskaya Gorkaya’, a bitter alcoholic beverage that was available across the city and became popular with foreign visitors.

A sip of Sakhalin 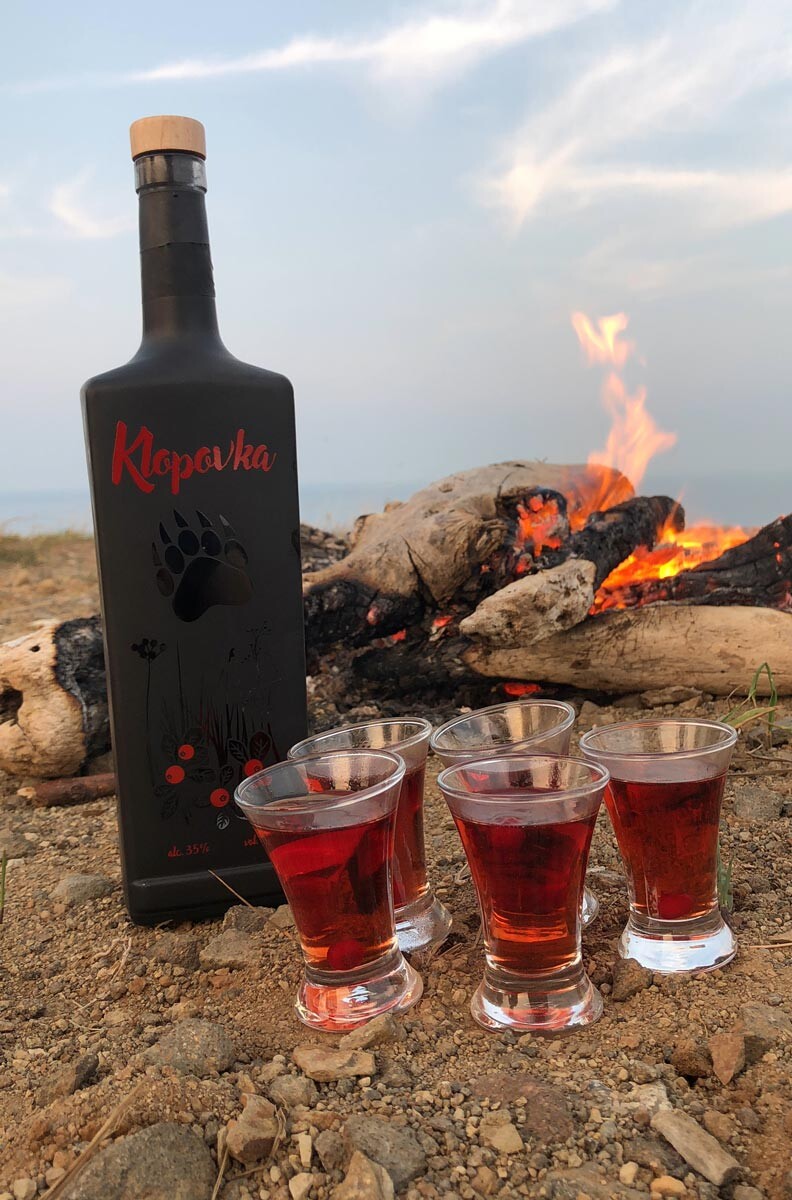 Strictly speaking, the Veresk distillery is not open to the general public and tourists don’t just pop in like they do at a vineyard in France. However, a new alcoholic beverage that is made from ‘Klopovka’ or red bilberries that are endemic to the Russian Far East and northern Japan piqued my interest.

The drink is the brainchild of Victor. He gets me into the Veresk factory, where the security staff scan my passport with a degree of amusement. They’re used to business visitors from Europe, Japan and even China, but they apparently see India as the land of spiritual teetotallers.

Veresk director Vladimir Perin shows us some of the new liqueurs that are in their production line. His office is full of all sorts of awards and certificates that Veresk’s products have won, but my eyes and taste buds are set on this new Sakhalin beverage.

As I get my first sip of ‘Klopovka’, my mind drifts from central Russia to one of the most sparsely populated places on earth - Sakhalin, which is eight time zones away and what feels like a planet away from Kashin (there are about 10,000 km between them!). I get instantly reminded of the berries, nature, landscapes and the cold sea breeze of Russia’s largest island. The drink, which has an alcohol content of 35 percent, is being marketed as an exclusive beverage, which goes equally well as an aperitif, digestif or accompaniment to dessert.

It is, of course, too early in the day for me to have more than just a small sip in Kashin.

For those who abstain from alcoholic drinks, the distillery produces mineral water, as well. Kashin is a resort-town and is famous for its reserves of mineral water and therapeutic mud, on which a sanatorium, founded in 1884, still operates for everyone who wants to improve their health.

Exploring the spiritual side of Kashin

Once we leave the distillery and get back into sightseeing mode, we head back to the main square. Originally built in 1382 and dedicated to St. Anna of Kashin, the Resurrection Cathedral, in its present form, dates back to the early 19th century. The church was converted into a warehouse in 1940 and then used as a house of culture from the 1970s.  It was only fully restored to an Orthodox Church in 2009. It is undergoing massive repairs in an effort to recreate the original ambience. 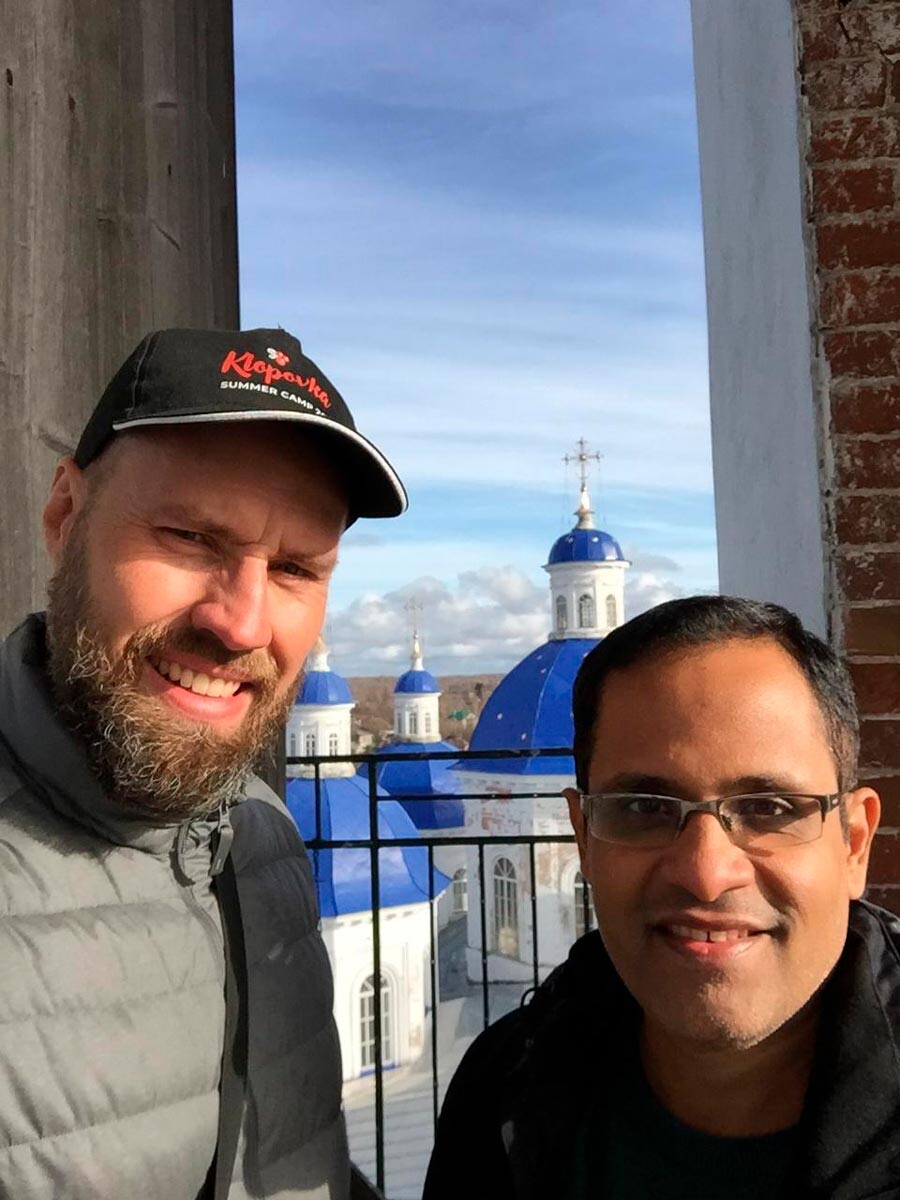 The highlight of a visit to the church is a climb up to the top of the 76-meter high bell tower that was built in the 1830s. Call it luck or a divine sign; we manage to get up to the top exactly a minute before noon. As we listen to the bells tolling on a sunny day, we look at the Volga tributary and the surrounding countryside, as well as the roofs of the town that has maintained its old world feel. The bell’s chimes, which, according to the legend, were purchased in the 1870s from the Leipzig Fair, add to the fairy tale feel.

The area near the cathedral has a few small cafes, serving standard Russian fare. We find a quaint café a few hundred meters away from the cathedral that has a view of the river. It’s too cold to sit on its terrace in fall, but it must be a lovely place to enjoy some borsch in the warmer months.

Flooded Belfry in Kalyazin, not far from Kashin 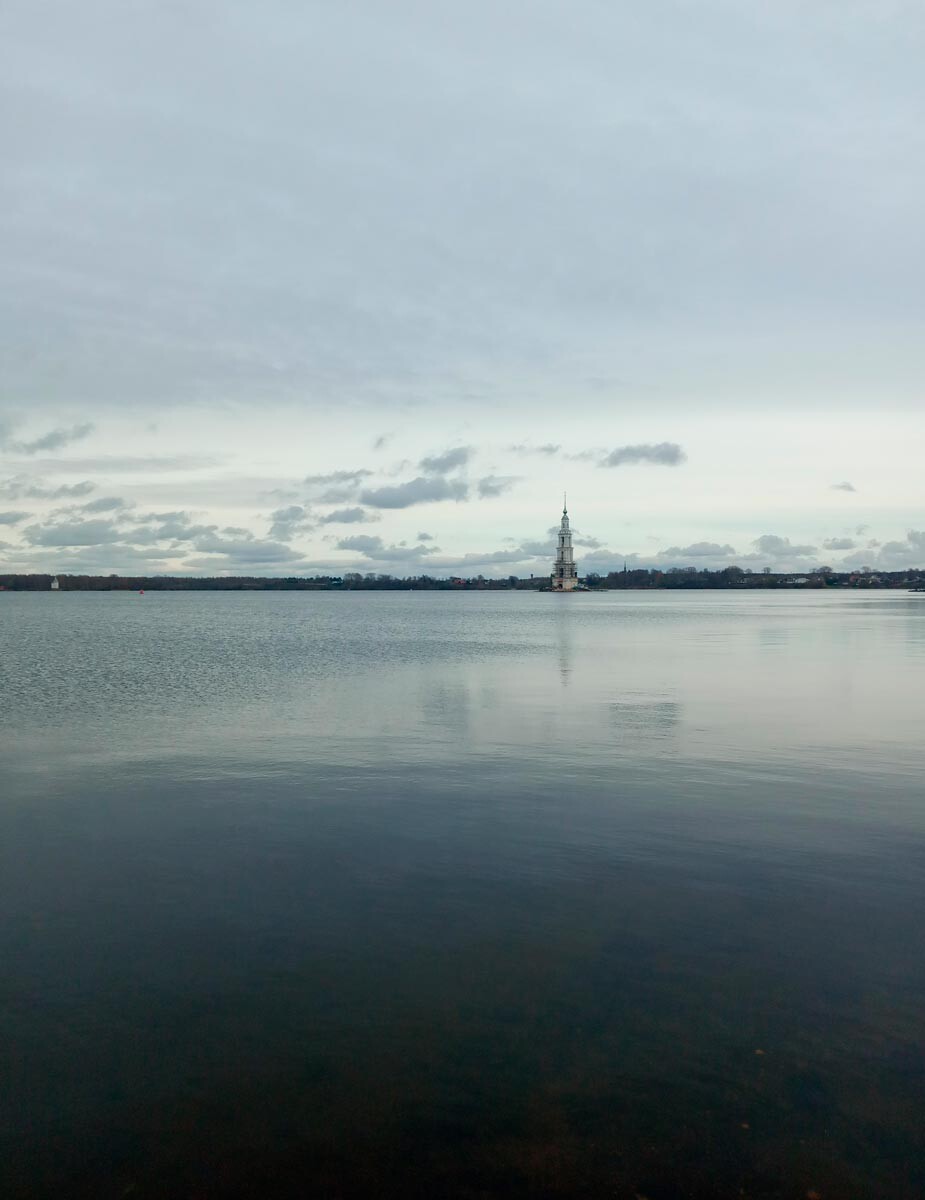 We take a slight detour on our way back to Moscow to get a glimpse of one of the most unique monuments along the Volga River. A 20-minute drive from Kashin, the town of Kalyazin, which is on the right bank of the Volga, is famous for its so-called Flooded Belfry or Kalyazin Bell Tower.

Built in the late 1790s, the 74-meter high bell tower was part of the larger St. Nicholas Monastery. The monastery and several other older structures in Kalyazin became a victim of the Uglich Hydroelectric Station dam that was constructed in 1939. The project led to the formation of the Uglich Reservoir, an artificial lake that swallowed up the monastery.

Miraculously though, the bell tower survived and is on a small islet that is visible from Kalyazin’s main riverside promenade.