An expat’s confession: Why I miss the city by the Amur – Khabarovsk 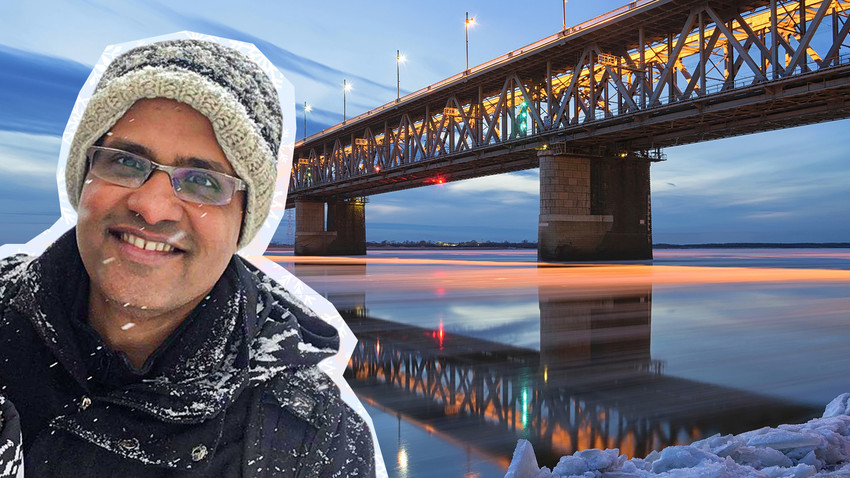 Ajay Kamalakaran; bksrus/Getty Images
Ajay Kamalakaran, an Indian who has been separated from Russia by the pandemic, writes about his favourite city in the country.

When a resident of Moscow or St. Petersburg hears from a foreigner that they think Khabarovsk is one of the most beautiful cities in the country, there’s usually one expression that is visible on his or her face – bewilderment! Not too many people from Western and Central Russia know much about the city by the Amur River. 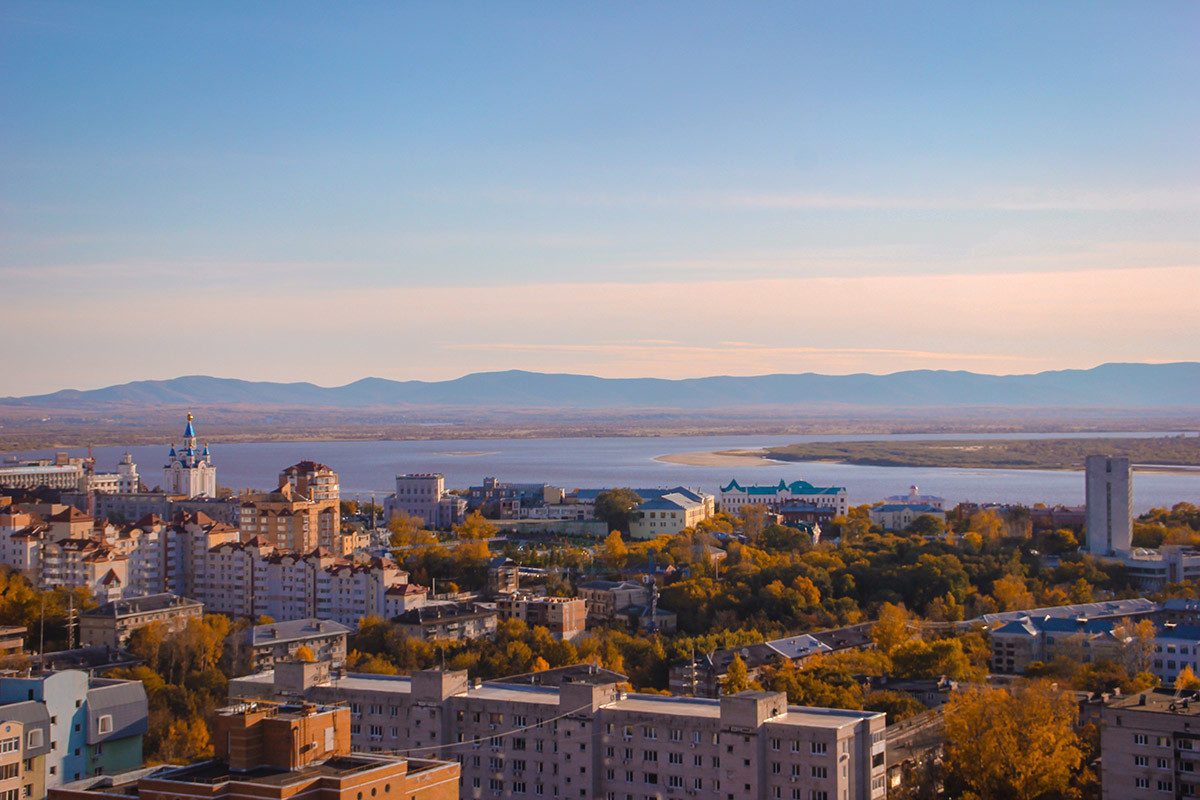 How does a city that is an 8-hour flight or a week’s train journey from the Russian capital hold its own with the country’s celebrated historic towns and cities? The Russian Far Eastern city of 600,000 inhabitants is just 163 years old and is much closer geographically to Beijing, Seoul and Tokyo than it is to Moscow or St. Petersburg. But, perhaps, it’s this physical distance from the European part of the country combined with a sense of a strong Russian cultural identity that actually makes Khabarovsk unique.

The Chinese border on the Bolshoi Ussuriiski Island is less than an hour’s drive away, but one would not believe it when walking around the streets of Khabarovsk. Nothing in the city even hints of its geographic Asian location. Being one of the biggest cities of the Russian Far Eastern Federal District, plenty of care has been taken to tastefully restore and maintain its pre-Russian Civil War (1917-22) architecture. Take a walk down the main thoroughfare, the Muravyev-Amurskiy street and you can’t help but marvel at the buildings that remind you of “Old Europe”. 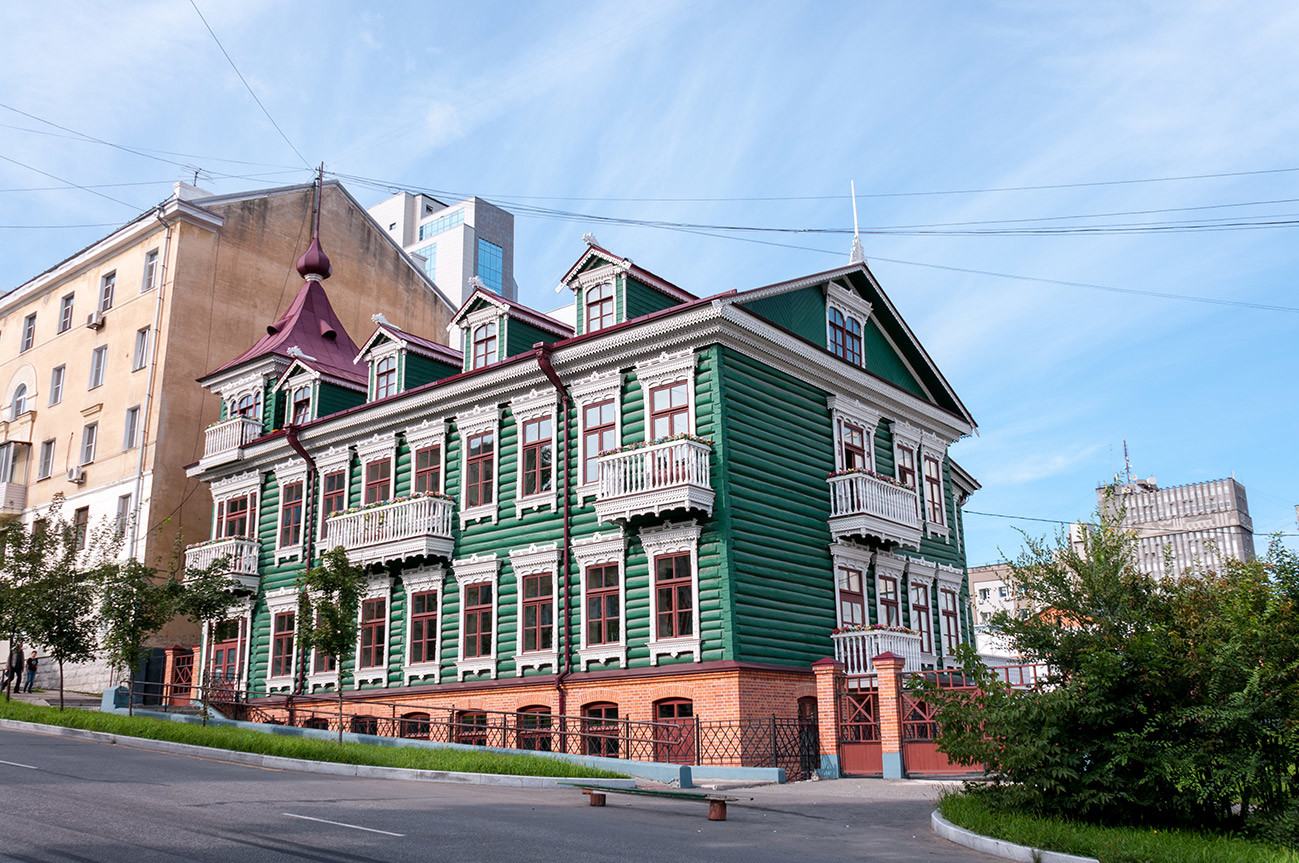 A restored wooden beautiful house in the center of Khabarovsk

In fact, anyone familiar with St. Petersburg would just not be able to help himself from comparing Khabarovsk’s most famous street with the northern capital’s Nevsky Prospect. They both form the traditional heart of the old cities and lead straight to the riverfront. Dare I say that the Amur riverfront is more diverse and visually appealing than the embankment close to St. Petersburg’s Hermitage? This is on account of its special topography. There is a series of hills by the Amur from where you can get some fine views of the city, its sandy beach, an expanding skyline and the undisturbed opposite bank of the river. 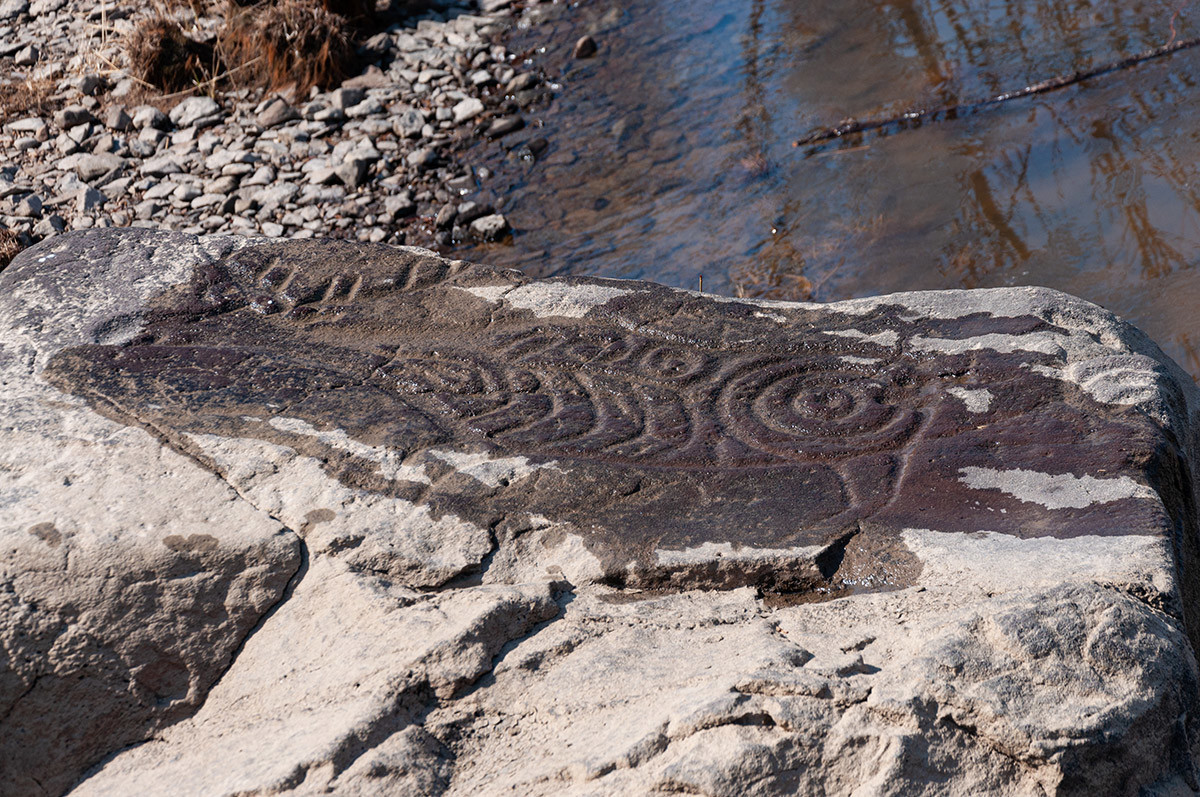 Petroglyphs on the stones on the bank of Amur river

This city was meant to be a hub of high culture and this is clearly visible in its museums and regional music and drama theaters. While Khabarovsk celebrates its Russian heritage, there is also a great deal of pride it takes in the traditions of its indigenous peoples. Travel 75 kilometers north and you’ll not just find 14,000-year old petroglyphs, but also a settlement and museum of the Nanai people. The original inhabitants of the eastern edges of Russia are small in number, but since the fall of the Soviet Union, there has been an increased and concentrated effort to save the language and heritage of the Nanai, Evenk, Nivkh and other ethnic groups. 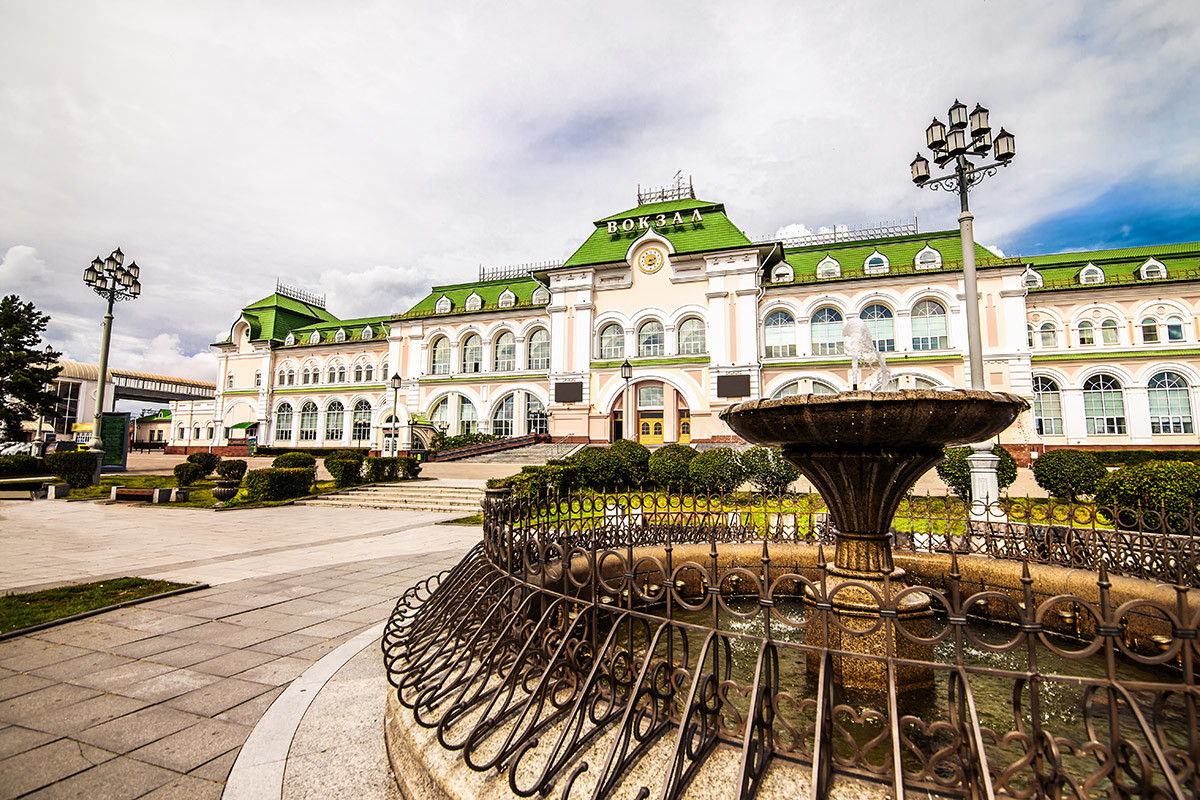 Heritage and cultural treasures are everywhere you go in Khabarovsk. Hop on a 1950s tram and travel from the railway station (which was rebuilt in 1935) along the boulevards and main avenues of the city, through to its southern outskirts to see different architectural styles. You’ll cross red brick buildings, some of them dating back to the early 1900s, and move on to more colourful pre-Civil War buildings, nudging newer and modern structures and rebuilt cathedrals, before heading to an area, where Stalinist three-floor homes were built for those who were “more equal than others”. 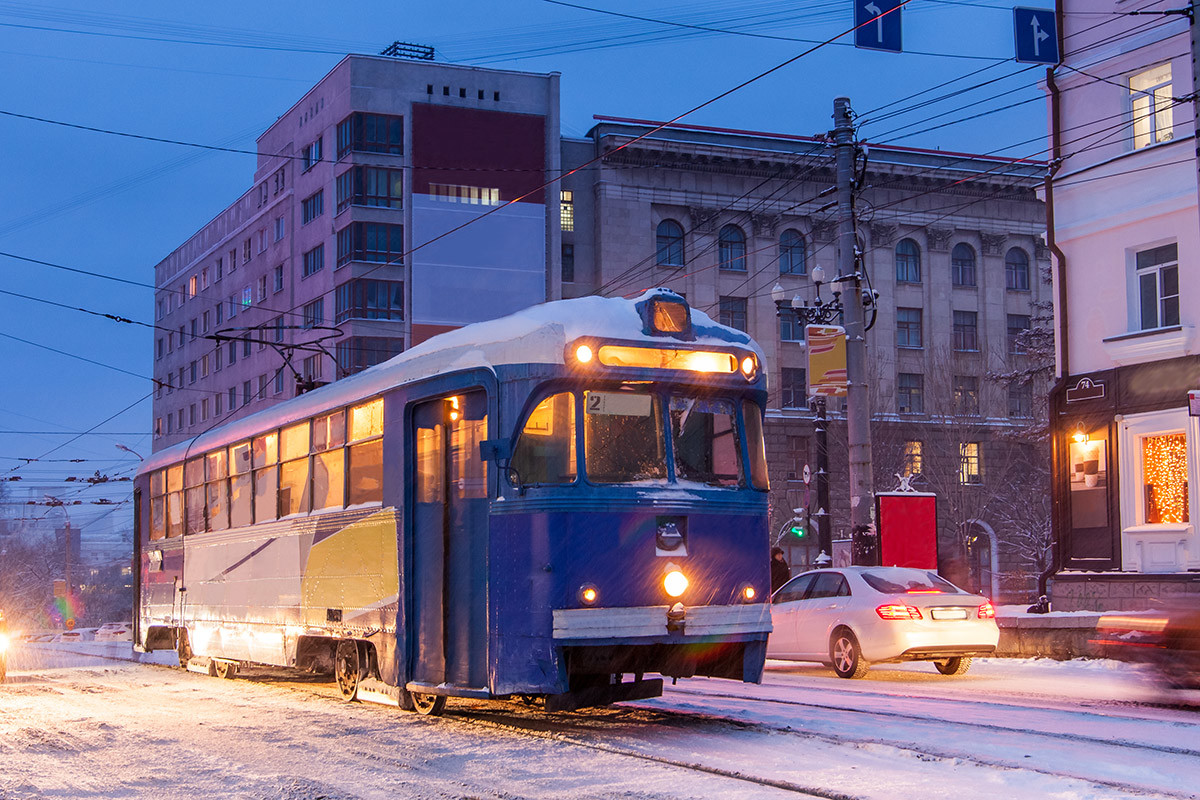 Old Tram at the winter street of Khabarovsk

I usually hop off before the tram goes any further, since I’ve been told that the city’s ‘Pyataya Ploshadka’ neighbourhood has a notorious reputation.

Winter of 2019: It’s -30 degrees Celsius and I am being slapped silly on both cheeks by a bone-chilling wind and then I hear the following from a friend, born and raised in Khabarovsk: “You know, this is the mildest winter we have had in many years!” During that interesting winter of fluctuating degrees of cold, I travelled across the Tatar Strait to my old home, Sakhalin, where it was “just” 10 degrees below zero. I couldn’t help but think how stuffy it felt when I walked out of the Yuzhno-Sakhalinsk airport! I had forgotten about the extra layers of clothing I put on while leaving my apartment in Khabarovsk. 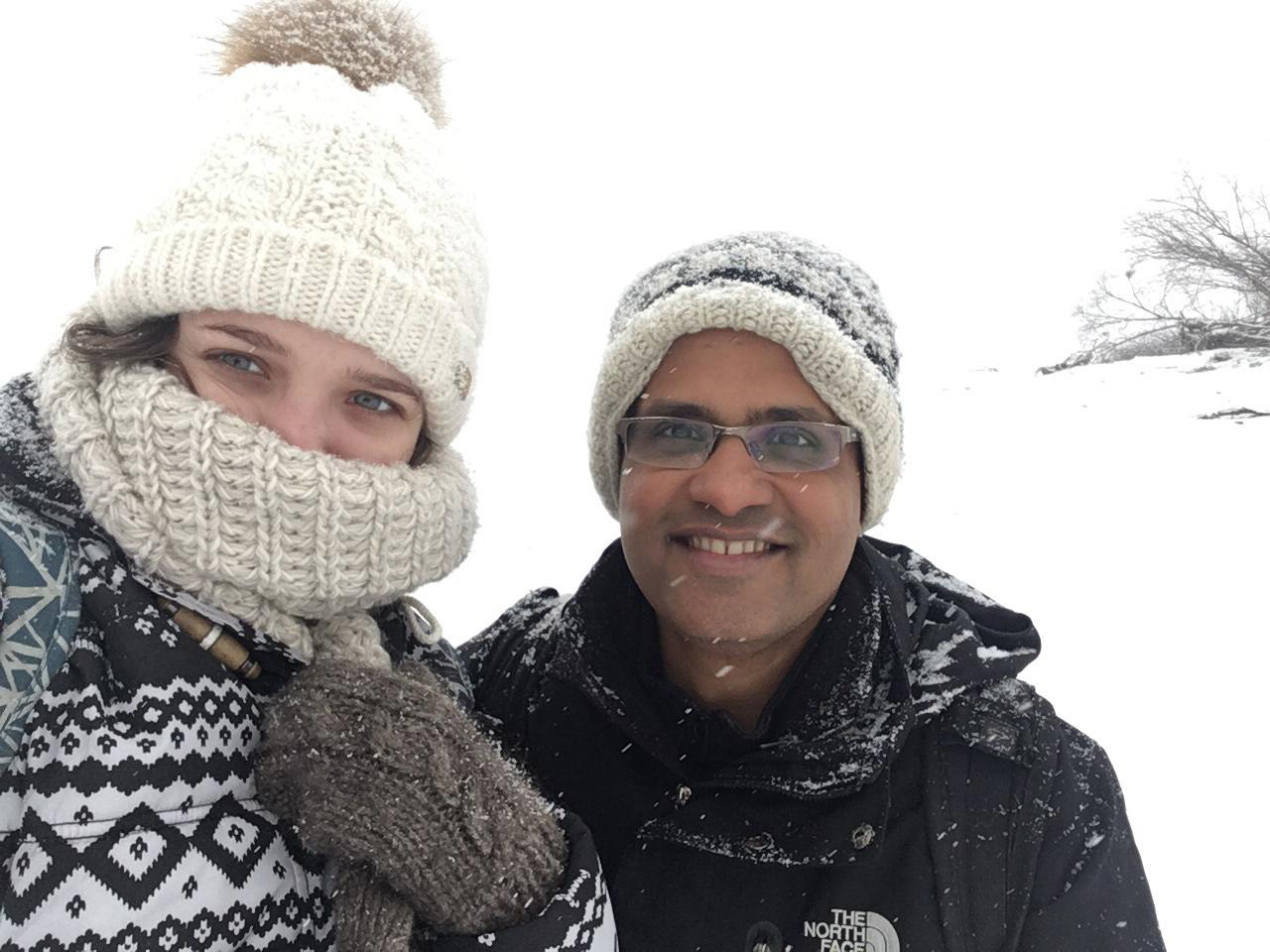 There’s a saying in Khabarovsk that the only place where people go for winter walks is from store to store. Such is the bone-chilling cold. So, that same winter, armed with a few extra layers of clothes on me, I walked around the city’s beautiful and frozen artificial pond just about every evening. The only company I had was the odd dog running around, while its impatient owner waited for the animal to “do its job” and head back home.

As cold as Khabarovsk is in the winter, it’s very sunny. Residents boast of it being the city with the third largest amount of sunlight in Russia. For a man from the tropics, where the sun is often seen as too strong and annoying, I smiled in amusement at this show of pride. But seriously, most Russian cities are beautiful in the summer and autumn when either the greenery or colourful foliage dominate the landscape, but Khabarovsk, with its lovely buildings, broad boulevards and avenues and large sodium-vapour lamps (no ugly white LEDs here yet), retains its beauty all year round, even in the winter. Of course, winter photography is a real challenge when you have to press the shutter button in such cold. Cameras and phones often freeze in that weather.

The freezing winters are great for those who like to sled, ice skate and take part in other winter sports. Even those who don’t have a great sense of physical balance on ice can take a long walk on the frozen Amur and prepare tea over an open fire on the opposite bank of the river. Others drive further out of town and over the river to try out a whole series of innovative ice sports.

The city’s Lenin Square is also a visual treat in the winters when it is home to a large number of ice sculptures.

As in many other parts of the country, a Khabarovsk resident’s favourite pastime is complaining about the weather. Winters are too cold and summers are too hot! That’s right. It can be as hot and humid as Bangkok or Mumbai in Khabarovsk on a summer day, but it inevitably cools down at night when the fragrant flowers from the trees intoxicate you with an aroma that the finest perfumes of Europe can’t hold ground with. 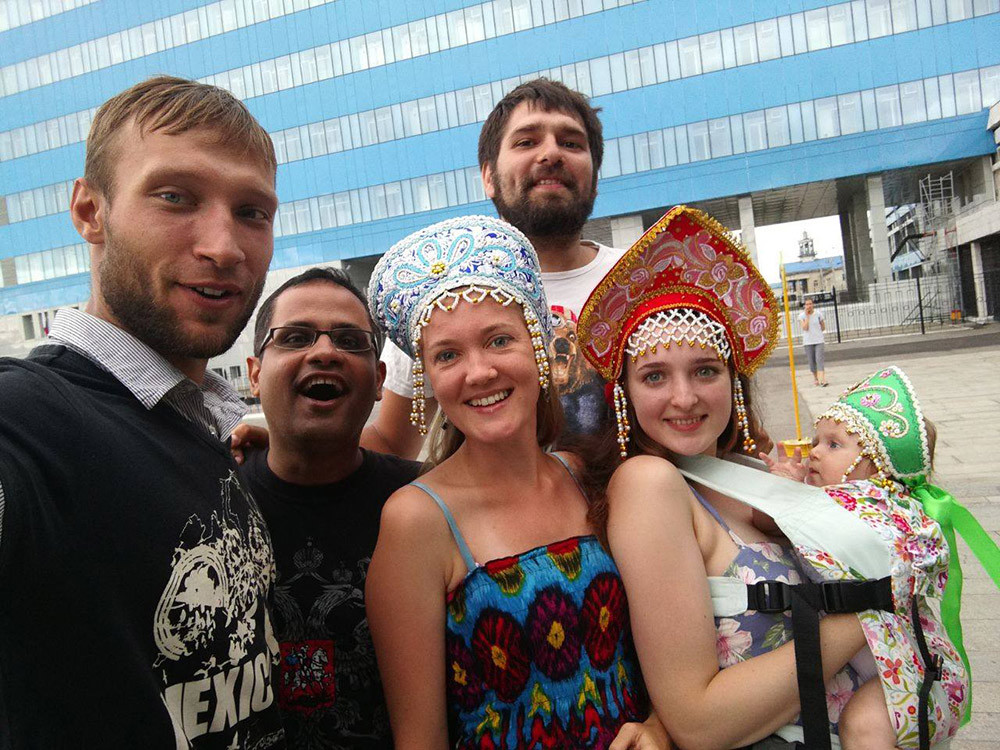 Outside the Khabarovsk Airport in 2017

Khabarovsk feels like a Mediterranean paradise in the summer. Locals bask in the sun and tan on the beach by the Amur. That is, those who have not made a beeline for the sea beaches of Primorye to the south. On the outskirts of the city, there is a series of peaceful lakes, some of those home to large lotuses.

The monsoons manage to find their way up north through East Asia to Khabarovsk, so you can find yourself enjoying a sunbath by a tranquil lake one minute and getting terrorized by the most potent and aggressive mosquitoes on earth the next if the heavens open up!

The fall is beautiful and colourful and the hills by the Amur turn yellow with a touch of red, orange and green. This is a great time to go hiking on Mount Khekhsir, which offers the best views of the spot where the Amur and Ussuri rivers split and Russia gives way to China. Keep in mind though that this is the habitat of the world’s largest tigers and these wild cats usually leave humans alone, but if they have a change of heart or a real appetite, they could use the fall camouflage to have you as a nice lunch, so be careful when you venture out! 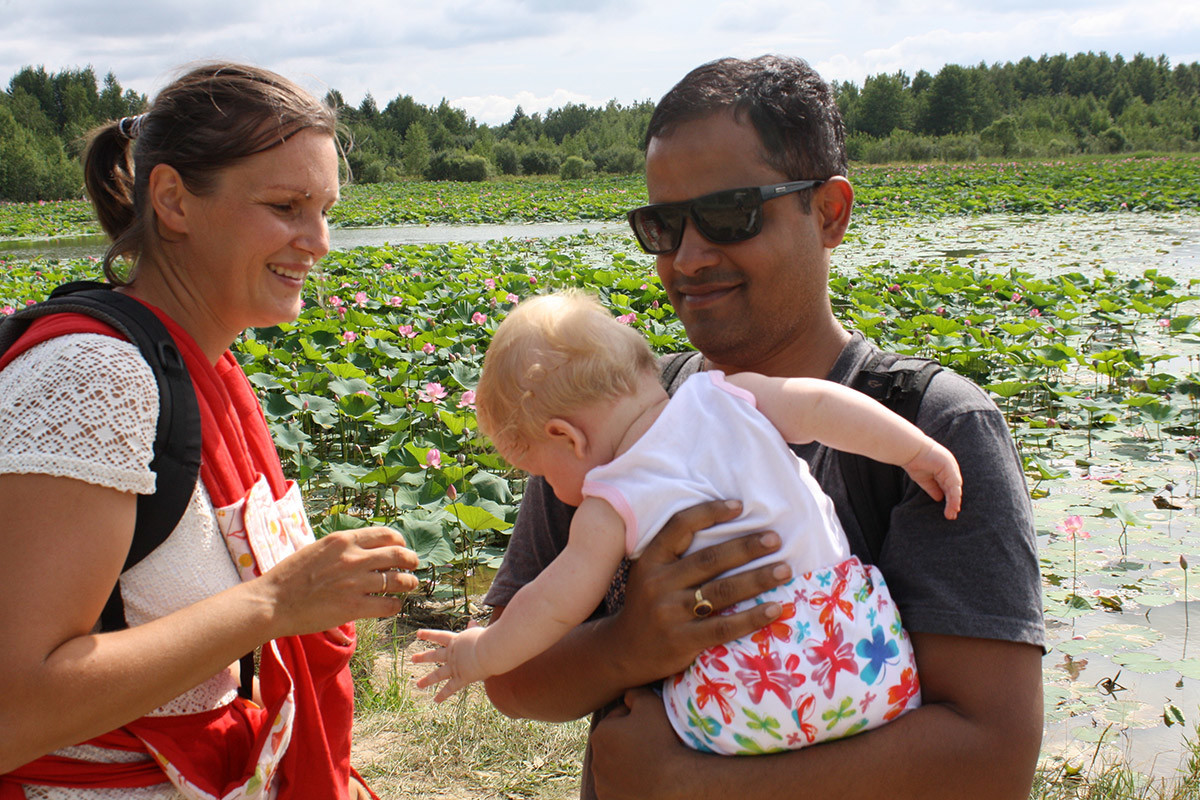 Also, keep in mind that these are some of the wildest forests in the country and more importantly, considered to be of highly strategic importance. Don’t be like an Indian man who got lost in these forests in the autumn of 2007 and only managed to get out the next day and back to civilization. He escaped the attention of tigers, leopards and bears by sheer luck, and took punishment from the security services and police with a smile. But not everyone may be so lucky.

Yes, Khabarovsk is beautiful all around the year and very liveable even if you have to pay 200 roubles (approx. $3) for a pair of not-so-tasty imported oranges from China in the winter! But what really makes me miss the city so much? Well, it’s the people. It really is the people who make a city and it’s the residents of this distant outpost of Russia that makes it the most beautiful in the country (there, I said it!).

There is a particular and distinct openness and friendliness about Khabarovsk. Even at the peak of the Cold War, when the Soviet Union was at its obsessed best when it came to secrecy and security, the city was not closed to foreigners and non-residents like Komsomolsk-na-Amure, Vladivostok and the island of Sakhalin. No armed guards entering trains or aircraft checking for passports and permits from every arriving visitor. This traditional openness and lack of distrust has helped define the character of this city. 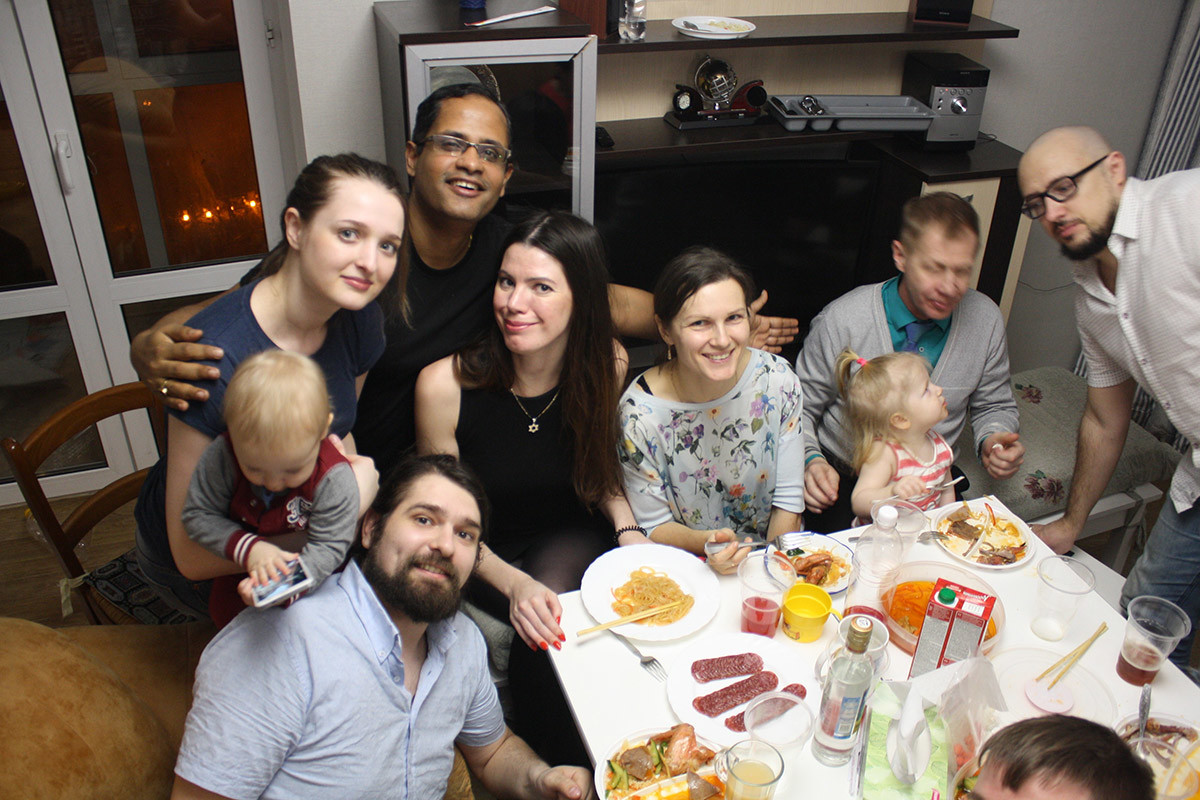 As the only Indian face for more than 700 kilometers, all I get is curious looks and smiles that expand widely when Russian comes out of my mouth. I remember visiting the city for the first time (not counting an earlier, brief transit) in the winter of 2006. At that time, I was a happy four-year resident of Yuzhno-Sakhalinsk, the first place I called home in Russia. The kind of fun I had with my new friends, including one extremely intelligent young man, who went on to develop trading algorithms for a major Moscow bank, made me question why I had waited so long to visit Khabarovsk. After that trip, it became my favorite city in the Russian Far East and the country as a whole. Several visits, short-term, medium-term and a memorable fall and winter sojourn has made me want to spend a lot more time there.

As the pandemic doesn’t seem to show any major signs of abating, I hear from close friends that they want to move to Krasnodar, for warmer weather (stop complaining about July in Khabarovsk then!). Others want to live in St. Petersburg or Kaliningrad to be closer to “Europe” and of course some want to live in the fabulous and world class capital city that is Moscow. None of these 30-somethings are interested in getting free land and cultivating it, as offered by the federal government. Khabarovsk is too far from the rest of the world, they say. Oh, but Tokyo, Seoul, Shanghai are close and the warmth of Southeast Asia is just two flights or a charter away, I argue. But this is to no avail. Getting to, travelling in and leaving the Russian Far East is an expensive proposition.

I know some friends who keep using the term Где родился, там и пригодился (Transliteration: “Gde rodilsya, tam I prigodilsya”), which means a person is of best use where they were born. I hope these friends and others do remain at least long enough for us to spend some meaningful and quality time together in the city by the Amur. But until then, it’s going to have to be technology that keeps us connected!