Mysterious stone labyrinths in the Russian North - what are they? (PHOTOS) 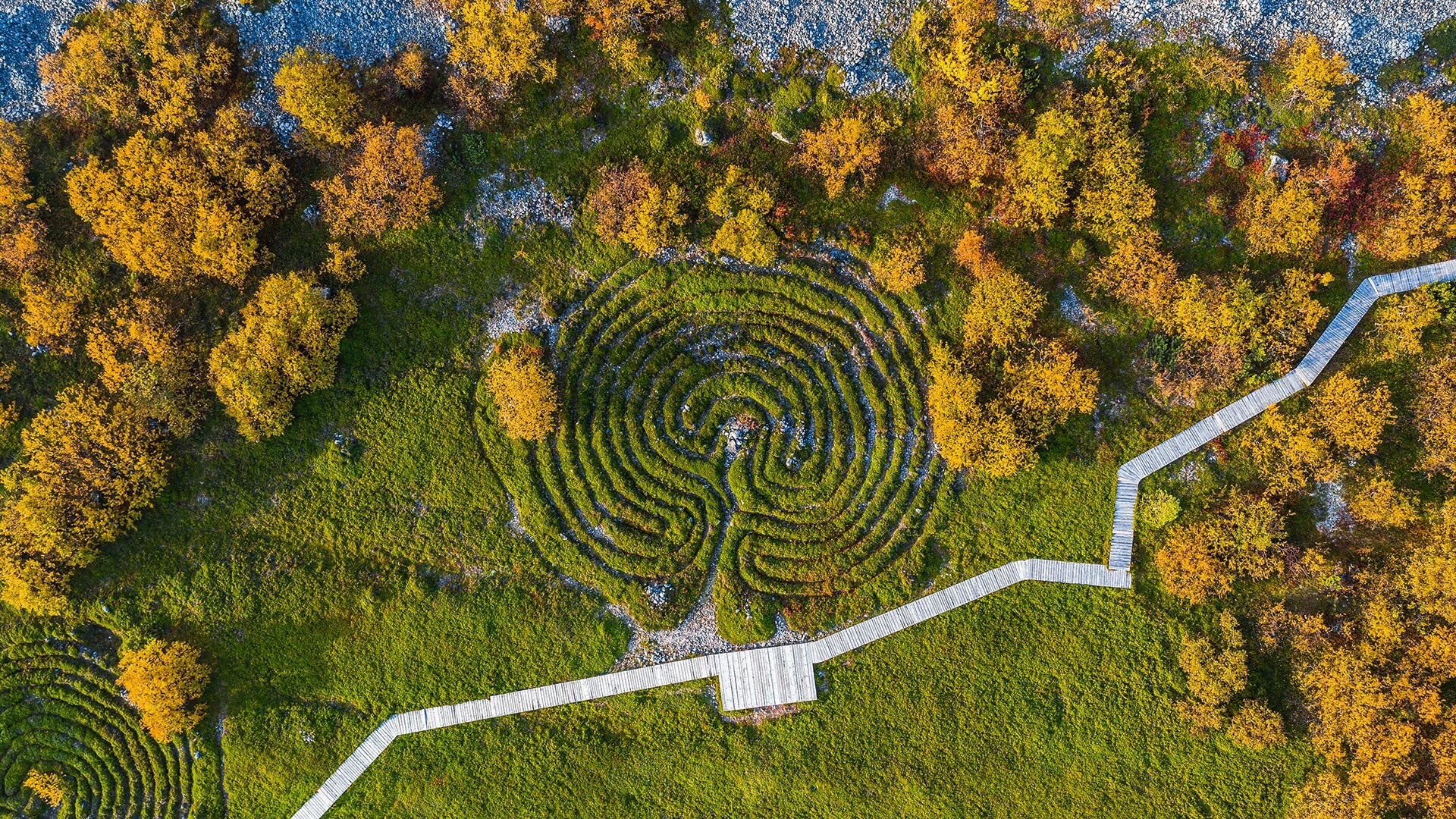 A stone labyrinth on the Bolshoi Zayatsky Island.

Ilya Timin/Sputnik
According to historians, ancient people diligently laid out spiral rock patterns on the ground, which have now been found in Karelia, Arkhangelsk and Murmansk regions. And entire scientific works have been written about the purpose of these structures.

Bolshoi Zayatsky Island is one of the main attractions of the Solovetsky archipelago, which is visited by tourists from all over the country. There, on the White Sea shores, far from civilization, the largest stone labyrinths in Europe are located - hundreds of stones laid out in the form of a spiral. Similar constructions have been found by scientists and local residents in various places of the Russian North. Who made them and why?

Who built the labyrinths? 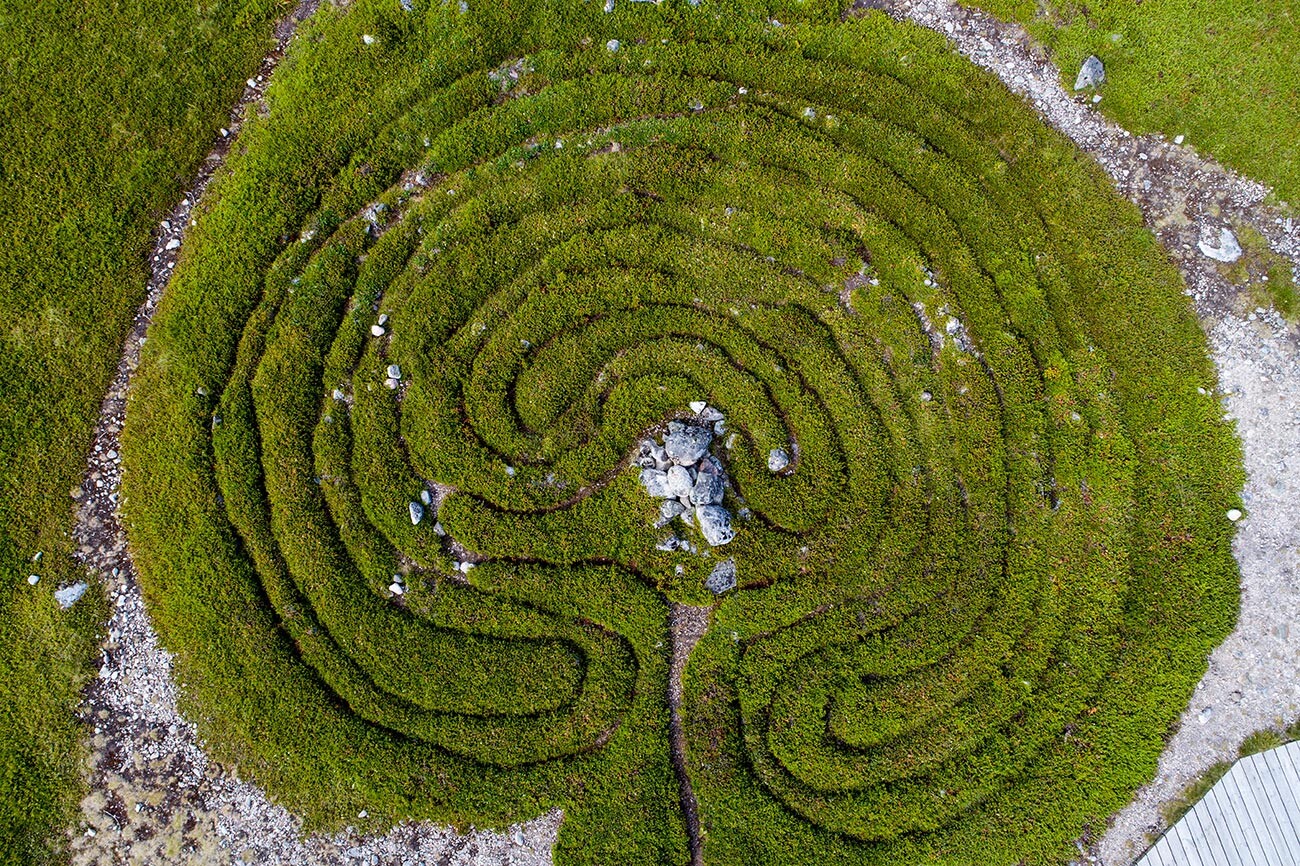 A labyrinth at the Bolshoi Zayatsky Island.

Such labyrinths have been discovered all over the world, but the greatest number of them is concentrated on the Solovetsky Islands (Arkhangelsk Region) - about 35, with 14 of them on Bolshoi Zayatsky Island. Besides these labyrinths,  hundreds of mounds, piles of boulders and dolmens were also found, which proves that the archipelago in the White Sea was inhabited in ancient times. It’s known that in the 1st millennium BC, nomadic Saami tribes lived there, but they were not the first - the radiocarbon analysis of the objects showed traces of humans of the 6th-7th millennium BC. The labyrinths themselves date back to about 1st-2nd millennium BC, which means that they should have been built before the Saami or Proto-Saami people. But some stone patterns could have been made later, too. 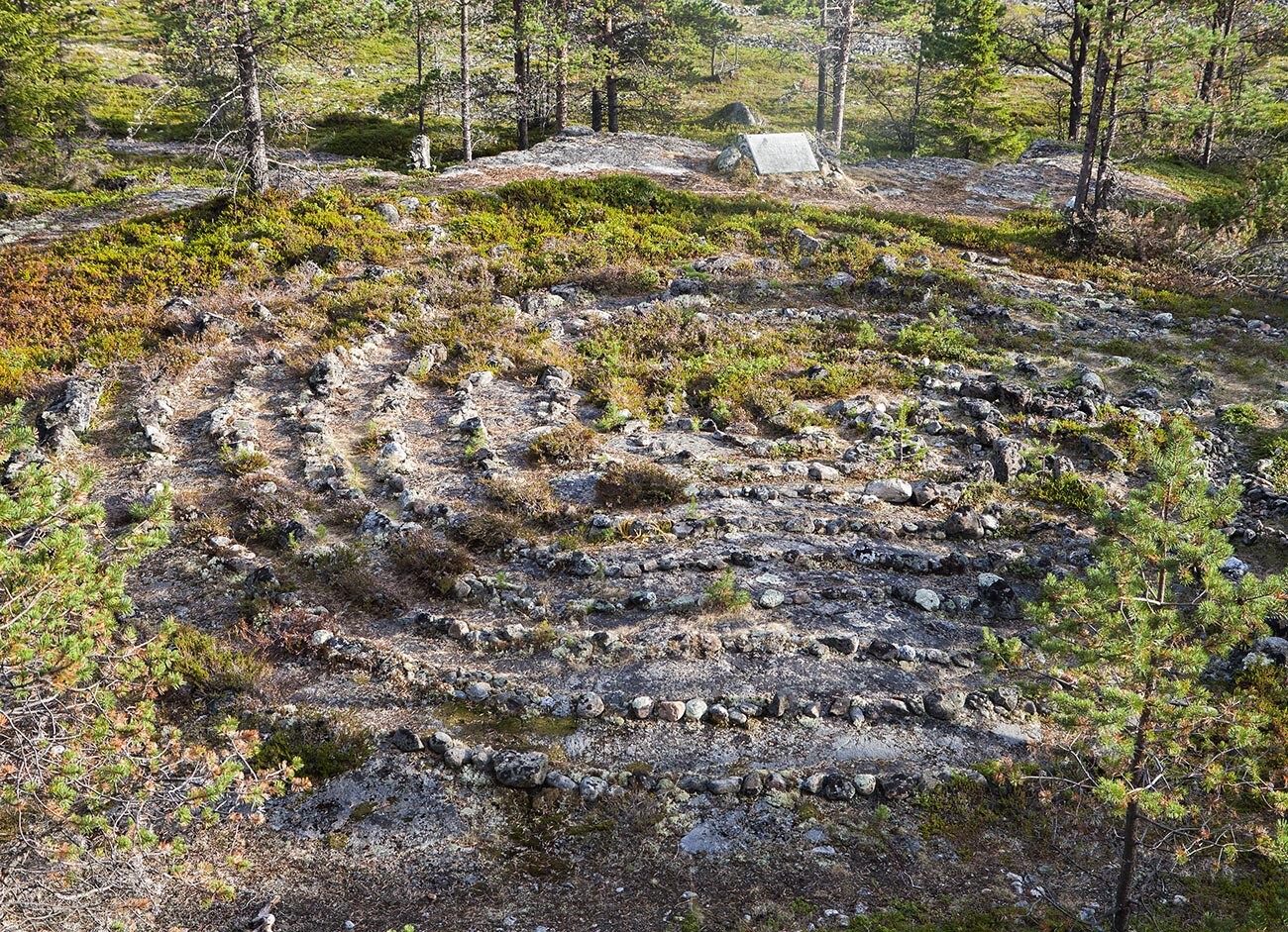 Umba labirinth in the Murmansk Region.

Also, such labyrinths were found on the islands of the Kuzova Archipelago in Karelia and not far from the town of Kandalaksha in Murmansk Region, as well as in some areas of Siberia. All of them are either on islands or in river estuaries, i.e. near water. 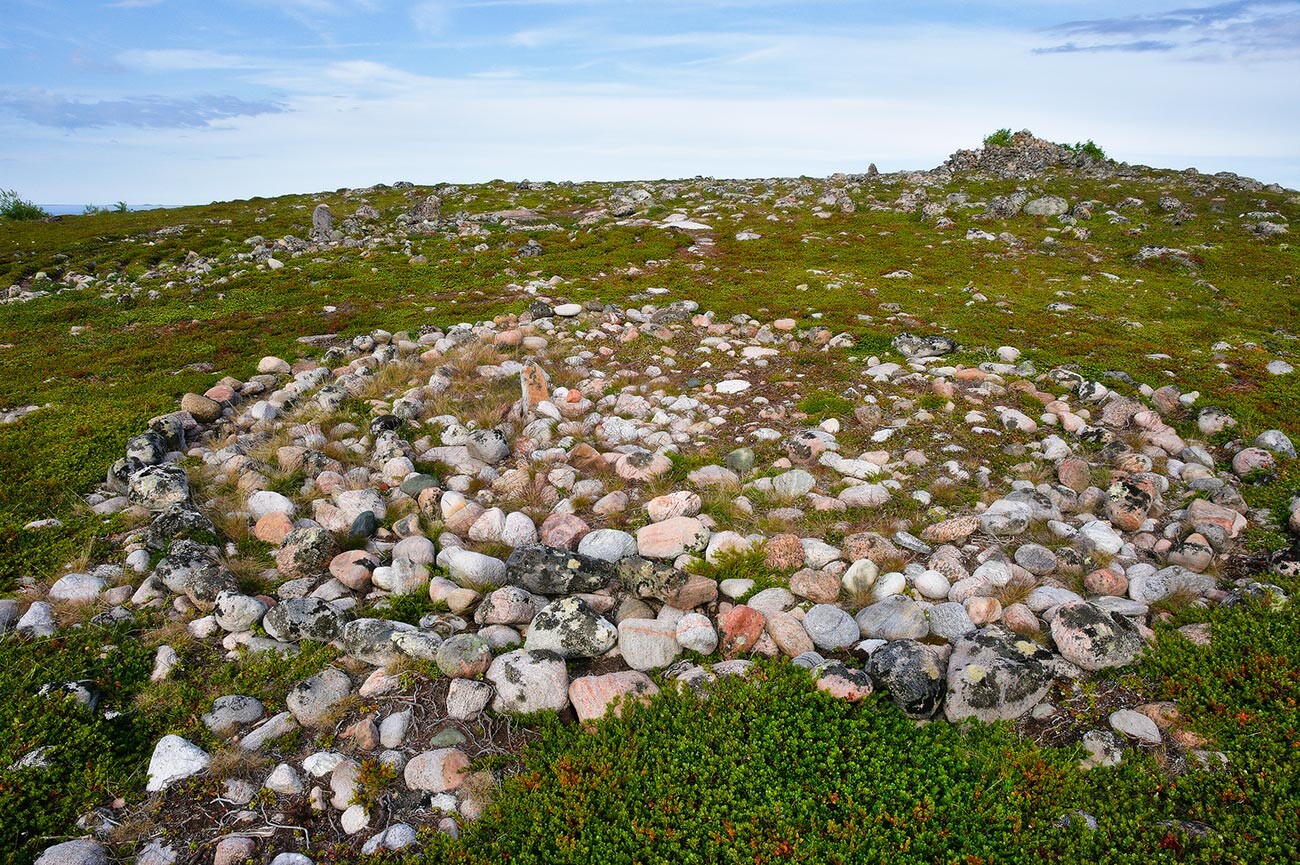 The labyrinths come in different shapes and sizes: one-helix, two-helix, concentric, crosswise. Their diameter varies from five to 30 meters. They are not very visible from afar and best viewed from above. The stones that make up the labyrinth are not set in any kind of mortar. The stones themselves are also naturally shaped and most of them show no traces of processing.

What do scientists say? 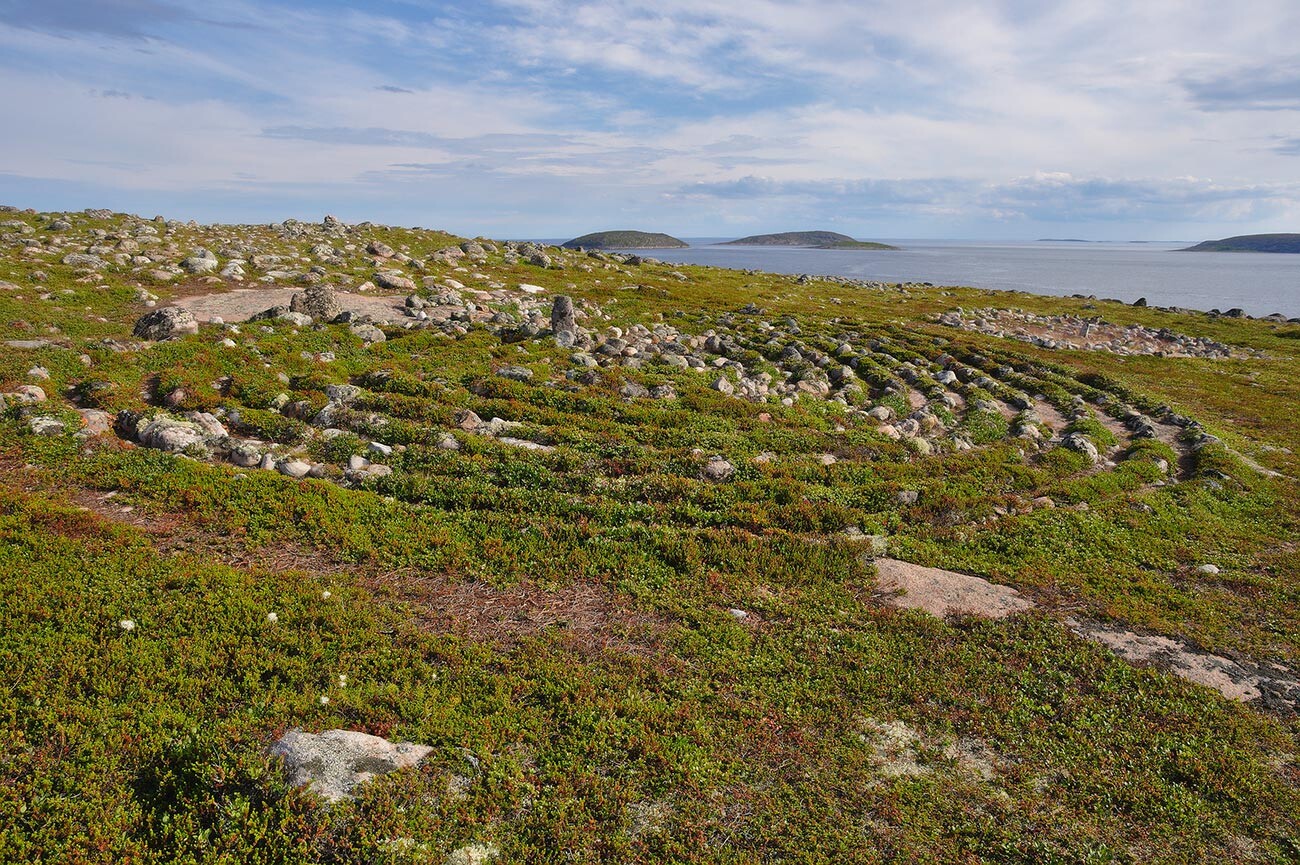 The research of the northern labyrinths began in the 19th century, although mentions of such structures have been found in some legends from the mid-16th century (one of the earliest was in the records of negotiations with the Swedes in 1552). They used to be called ‘babylons’, because of their complex shape. Here is what doctor and member of the Russian Geographical Society Alexander Eliseev wrote in 1883: “In our opinion, these labyrinths, like other stone patterns of our north, should be attributed to a completely original type of megalithic constructions and can be placed next to the cromlech circles or simple stone circles without a central composition and also near the great Russian mounds… More or less definite position of ‘babylons’ indicates that they belonged to one particular group of peoples. The intricate form of these folds has, no doubt, a symbolic meaning or mythical lining; a scroll composed of stones, having no end, by analogy with the symbolic infinite line of other Aryan and Negro peoples, may symbolize both the infinity of the world and the serpent, i.e. the evil beginning.”

He also says that labyrinths are considered holy places for some Northern peoples. 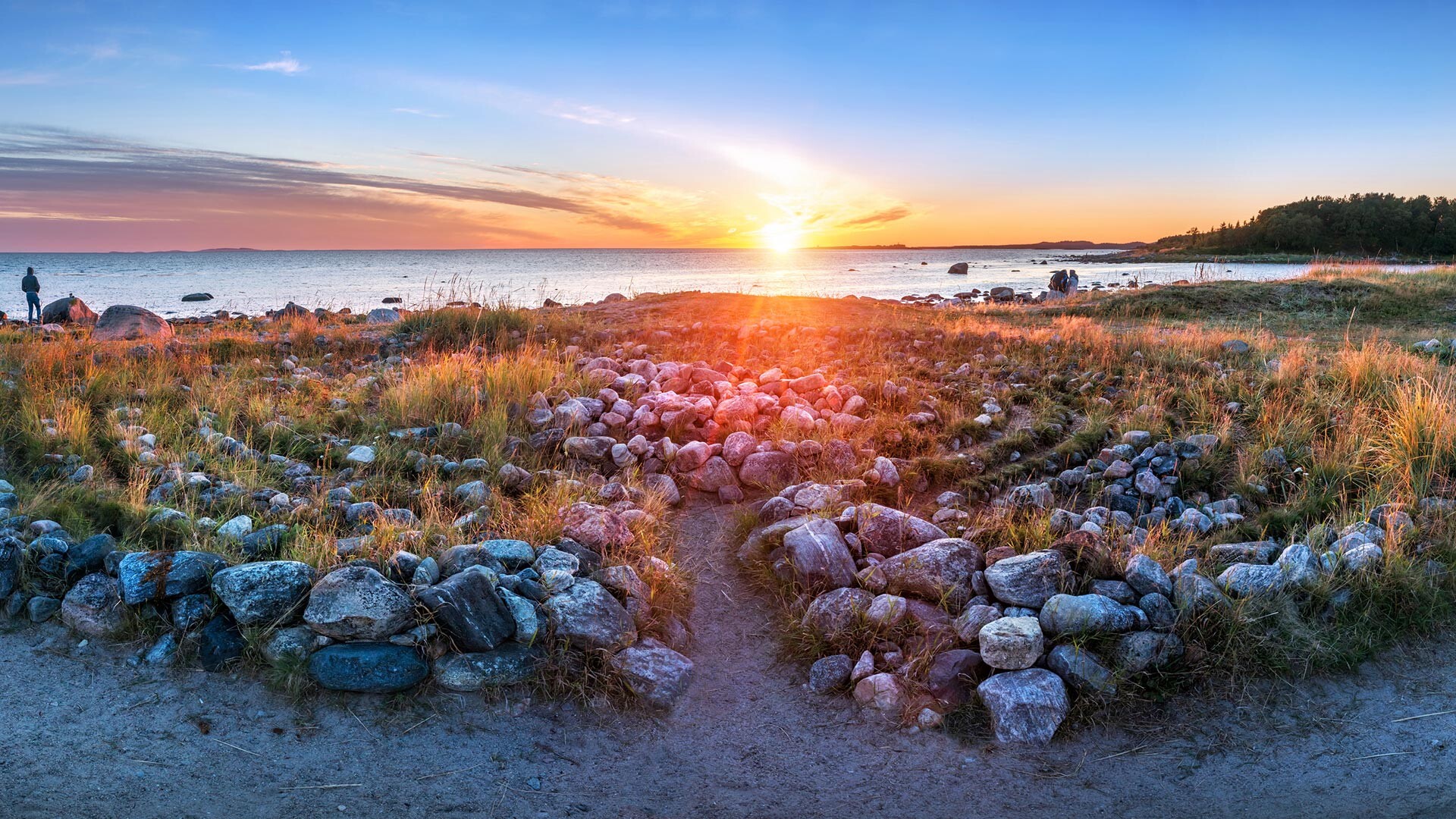 A large labyrinth of stones on the shores of the White Sea on the Solovetsky Islands at the Cape of Labyrinths.

In 1925, ethnographer Nikolai Vinogradov, who was imprisoned in the Solovetsky special camp, but was allowed to go outside the camp walls, became interested in these labyrinths. He examined several islands, describing most of the labyrinths in great detail and came to the conclusion that they were all different in shape and orientation to the sides of the world and, therefore, they could have been intended for different purposes, both cultic and symbolic. To date, this is the most detailed scientific description of the labyrinths (his two books of 1927 in Russian: 1 and 2). 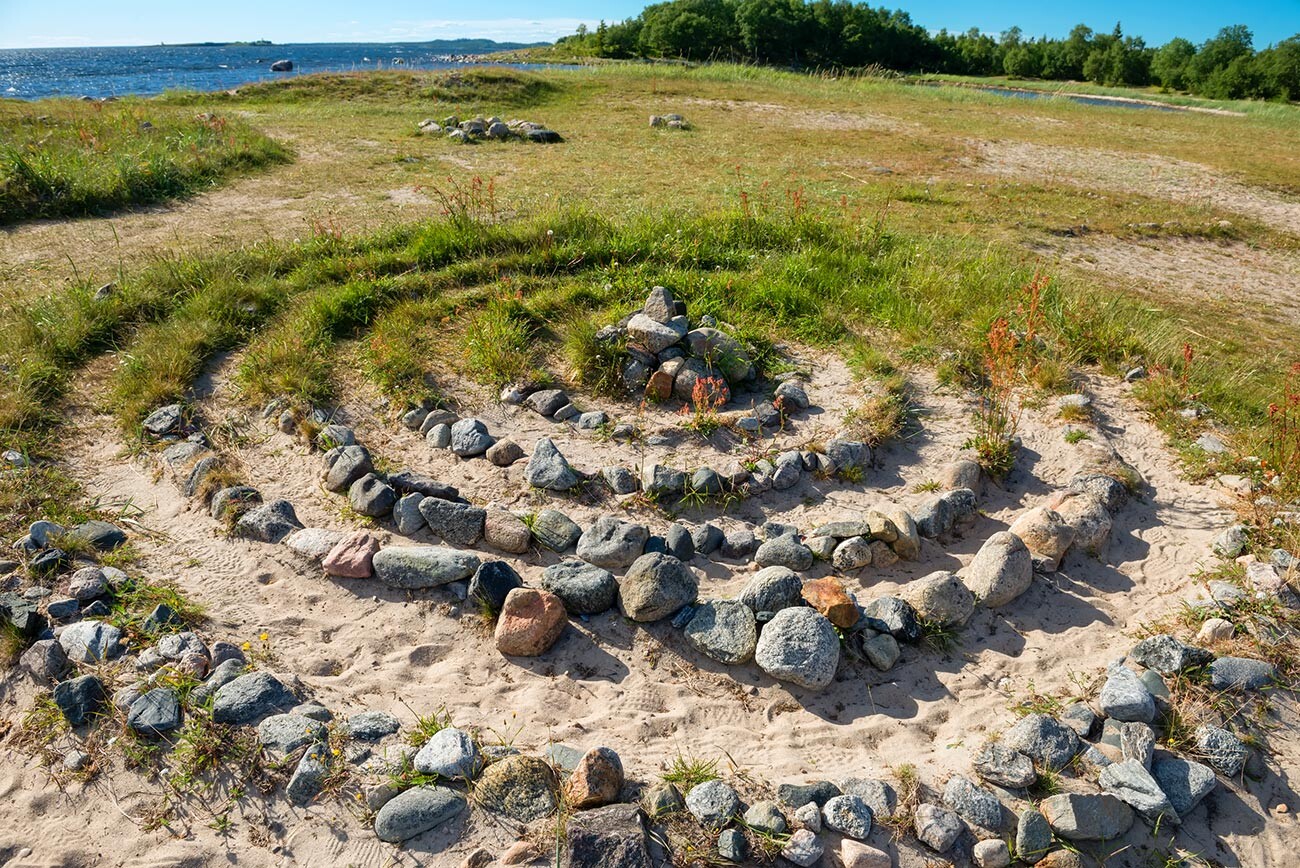 Another Solovetsky prisoner, priest and philosopher Pavel Florensky, suggested in the 1930s that the labyrinths were tombstones, preventing the soul from returning to the world of the living. However, archaeological excavations have rejected this theory.

Scientists still do not know what these labyrinths were really created for. Many contemporary researchers believe that such structures had a ritual meaning. The spiral is one of the world’s ancient symbols, found in every culture in one way or another and especially often associated with rituals such as initiation. The so-called “labyrinth trials” were also in ancient Greek epics (remember the story of the Minotaur’s labyrinth?) and in medieval Christian tradition as a symbol of cleansing from sins (they are preserved in the cathedrals of Chartres and Amiens in France, for instance). Passing through the labyrinth, one leaves the past and discovers something new. 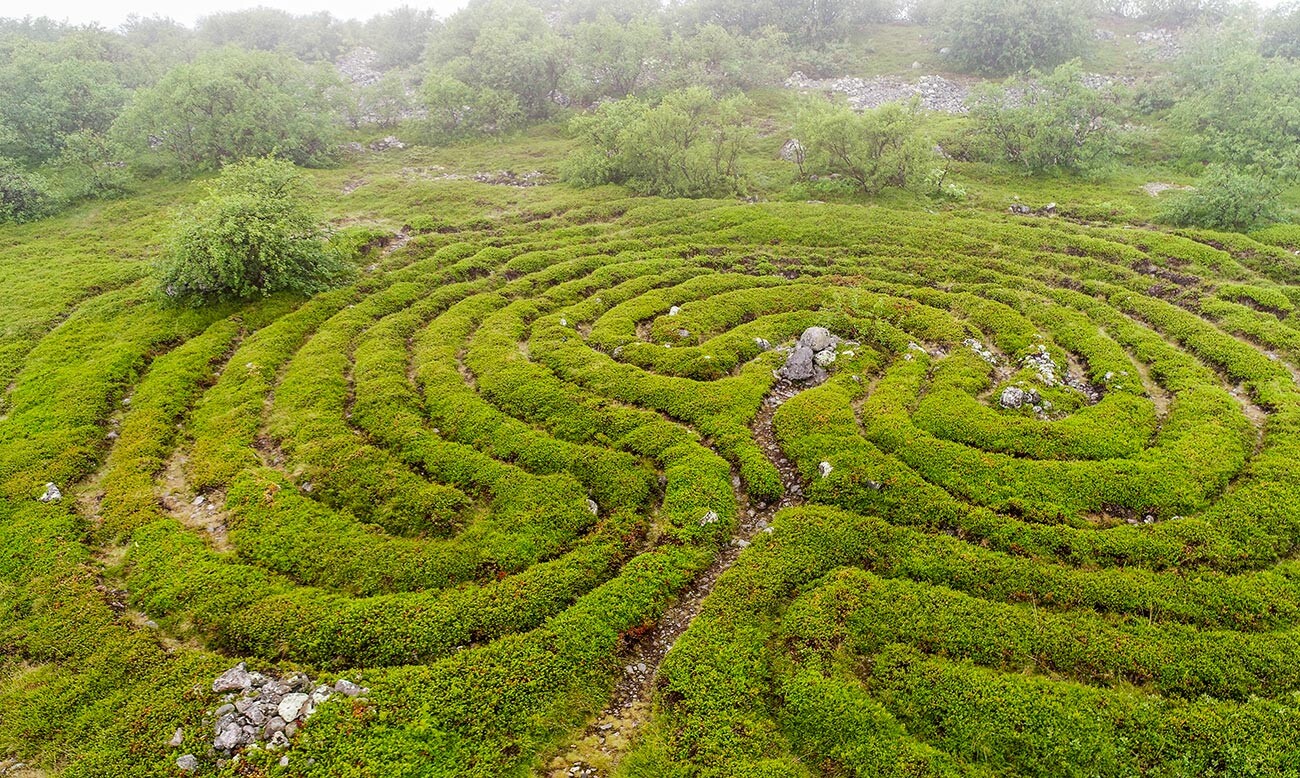 Apart from rituals, labyrinths, at least some of them, could also have a purely practical meaning. The Soviet archeologist Nina Gurina, having studied Karelian and Murmansk labyrinths, assumes that they were intended for fishing. The point is that the water level could have been higher centuries ago and such stone traps “locked” the fish without distracting people from other things.

For example, in this video, Russian bloggers are trying to replicate the stone trap for fish using the technology of a Canadian Indian tribe - it’s slightly different in shape, but it’s also a labyrinth. As they claim, it took them only 20 minutes.