How the ruined church at Krokhino stood against rising waters

Travel
William Brumfield
Architectural historian and photographer William Brumfield takes a look at the partially submerged Nativity Church at Krokhino in the Russian North, and compares its current appearance with a photo taken in the early 20th century by Sergey Prokudin-Gorsky. 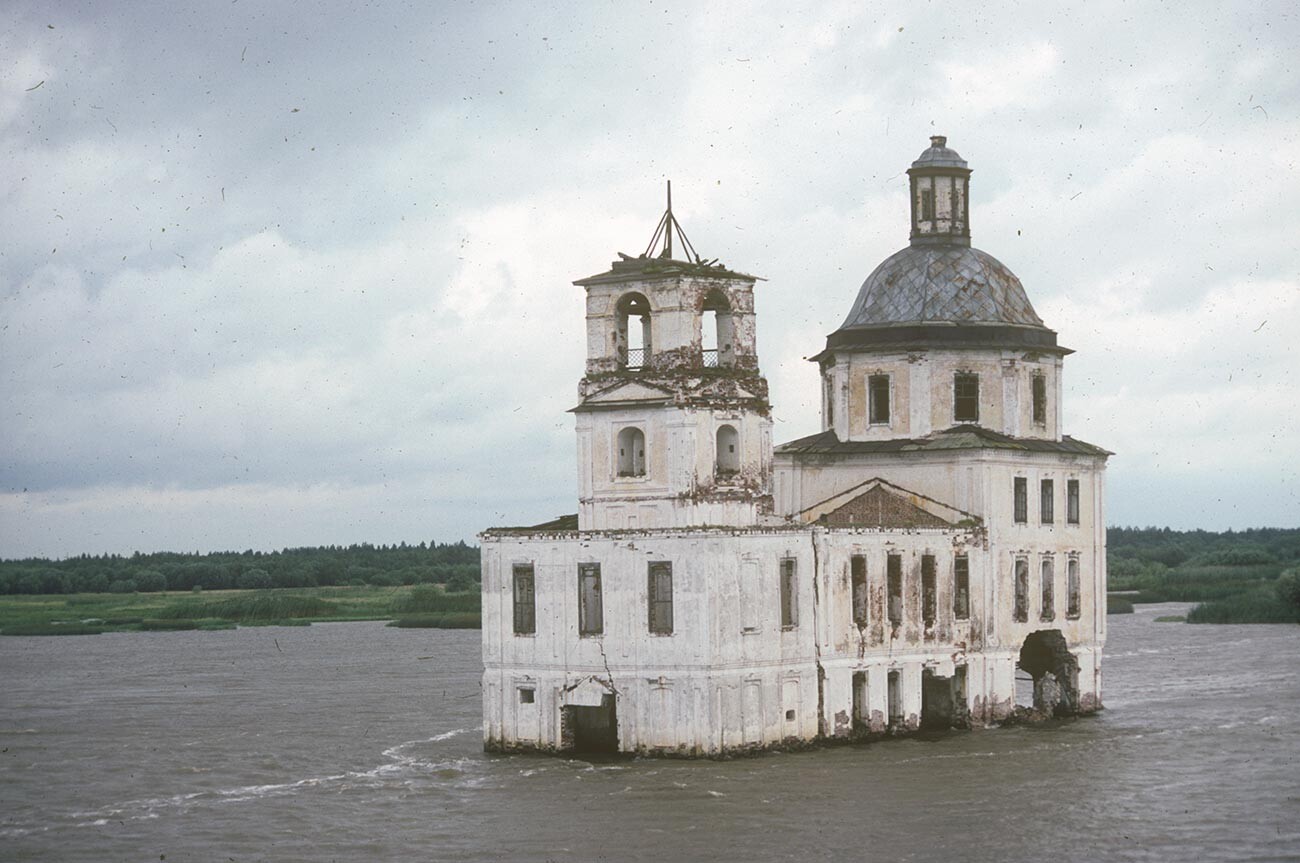 Krokhino (Belozersk Region, Vologda Province). Church of the Nativity situated in the waters of the Sheksna River. Southwest view from cruise boat. August 8, 1991

In the early 20th century, photographer and inventor Sergey Prokudin-Gorsky developed a complex process for developing color photographs. Inspired to use this new method to record the diversity of the Russian Empire, he undertook numerous journeys over a period of 13 years, often with the support of the Ministry of Transportation. His vision of photography as a form of education and enlightenment was demonstrated in public screenings of his color images taken in historic, often remote, towns and villages in the Russian heartland. 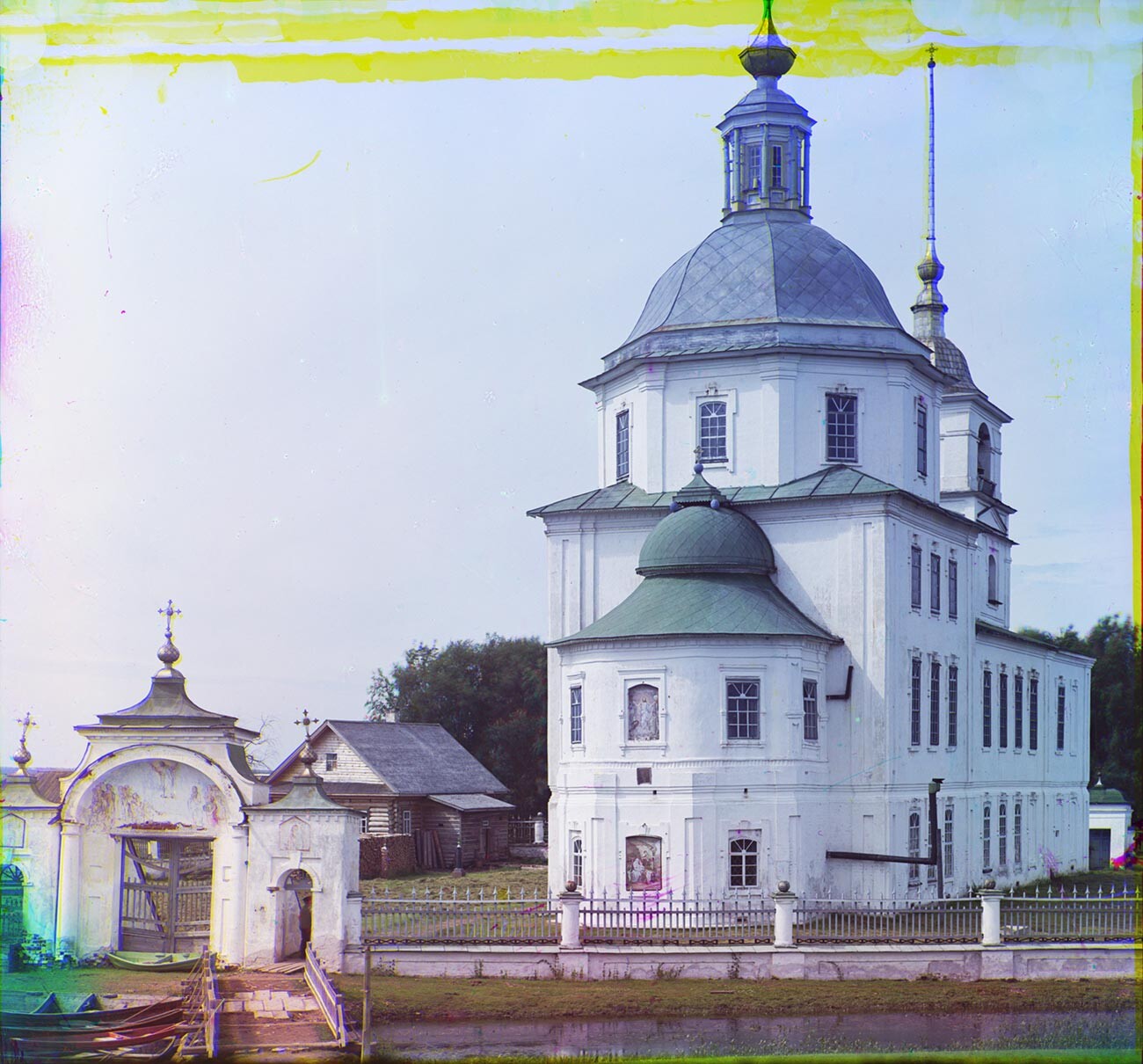 In 1909, Prokudin-Gorsky traveled along the Mariinsky Canal System (now known as the Volga-Baltic Waterway) that links St. Petersburg with the Volga River basin. Along the waterway is White Lake (Beloe ozero) in the Vologda territory; its southeastern part drains into the Sheksna River, a tributary of the Volga.

Еach year, tourist cruise ships sail on this waterway between Moscow and St. Petersburg, passing the famous bell tower “on the waves” that was originally part of the Cathedral of St. Nicholas at Kalyazin (Tver Province). 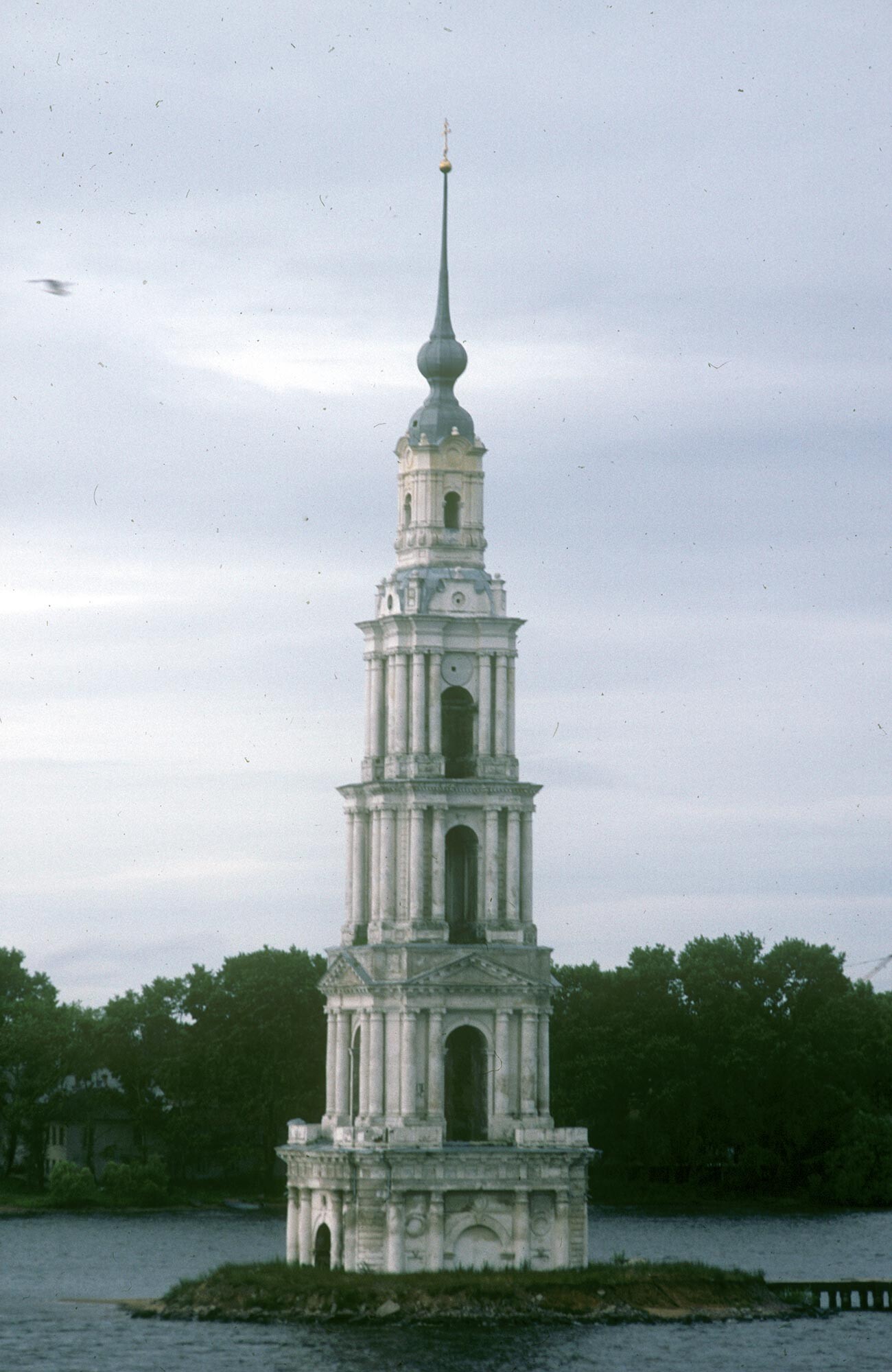 Kalyazin. Bell tower of the Cathedral of St. Nicholas. Cathedral was demolished during the creation of the Uglich Reservoir (part of the Volga River), but the bell tower remained as a beacon. August 9, 1991

Built in 1800 to service the late 17th-century main church in the Monastery of St. Nicholas-Zhabensky, the five-tiered neoclassical bell tower was preserved for use as a beacon when most of historic Kalyazin succumbed to the rising waters of the Uglich Reservoir, which was built in 1939 for a hydroelectric station and increased navigation on the Volga River. The Kalyazin bell tower has been periodically reinforced and is now open to visitors and pilgrims.

Farther north on the same waterway is a no less dramatic architectural gem — the partially submerged Church of the Nativity of Christ in the former village of Krokhino. (In Russia most Nativity churches are dedicated to the Nativity of the Virgin Mary.) 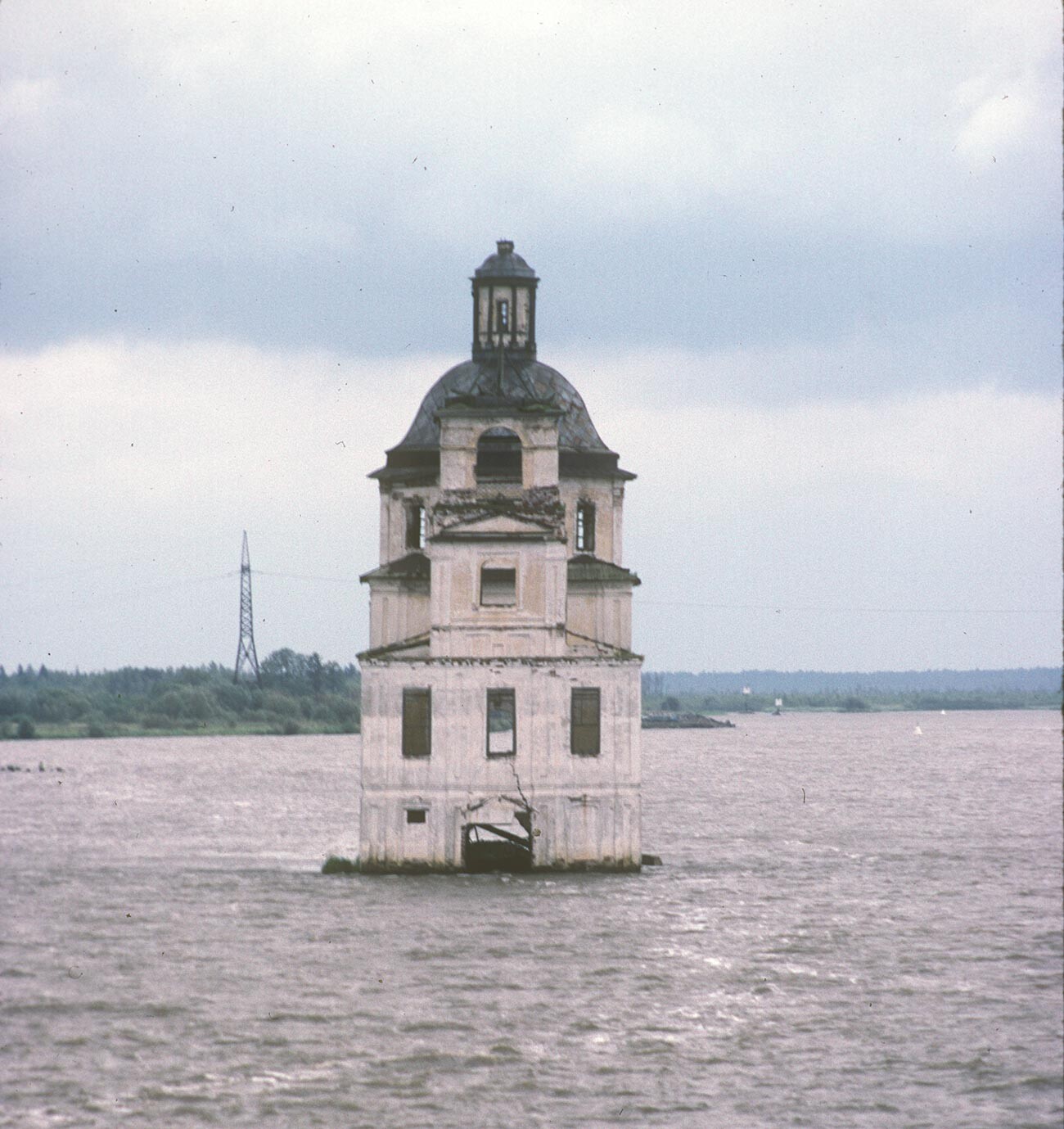 Originally situated on the high left bank of the Sheksna River near the town of Kirillov, the Nativity Church, along with the village that surrounded it, was engulfed by the waters of the Sheksna Reservoir, created after World War II by damming the river for a hydroelectric project.

We are fortunate that Prokudin-Gorsky photographed the Krokhino church during his expedition in the summer of 1909. At that time the church stood on solid ground in its small hamlet, untouched by river waves. My photographs of the ruined church were taken from the deck of a river cruiser in August 1991 and then 16 years later, in July 2007. (Depending on the schedule, the cruise boat does not always pass the site during daylight.) 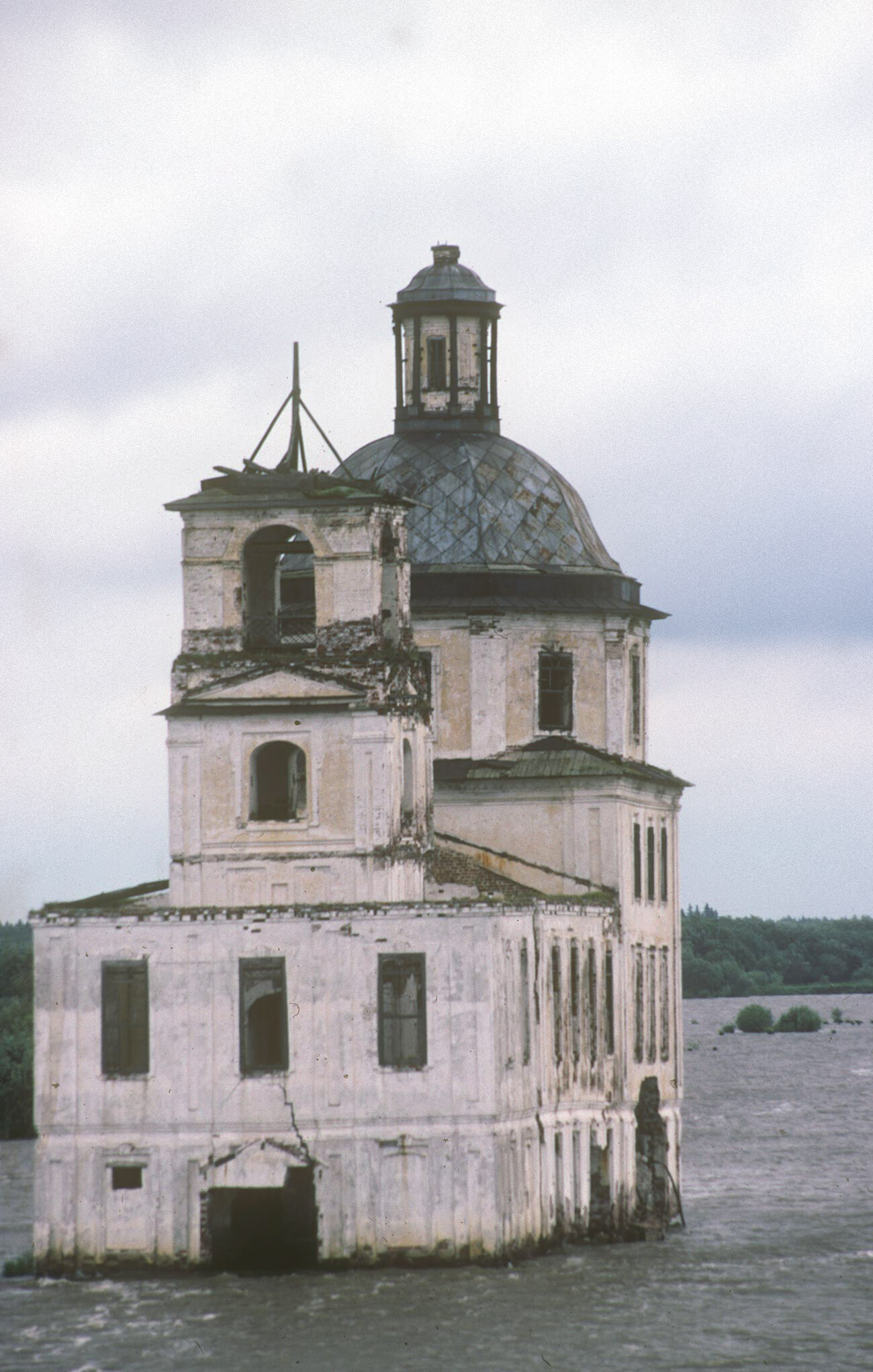 The earliest mention of Krokhino dates to 1426 in records from the nearby St. Kirill-Belozersky Monastery. Archeological evidence seems to link the village to the site of the ancient settlement of Beloozero before its move westward to the site of today’s Belozersk. For decades around the turn of the 19th century, Krokhino prospered from river work along the Mariinsky Canal. 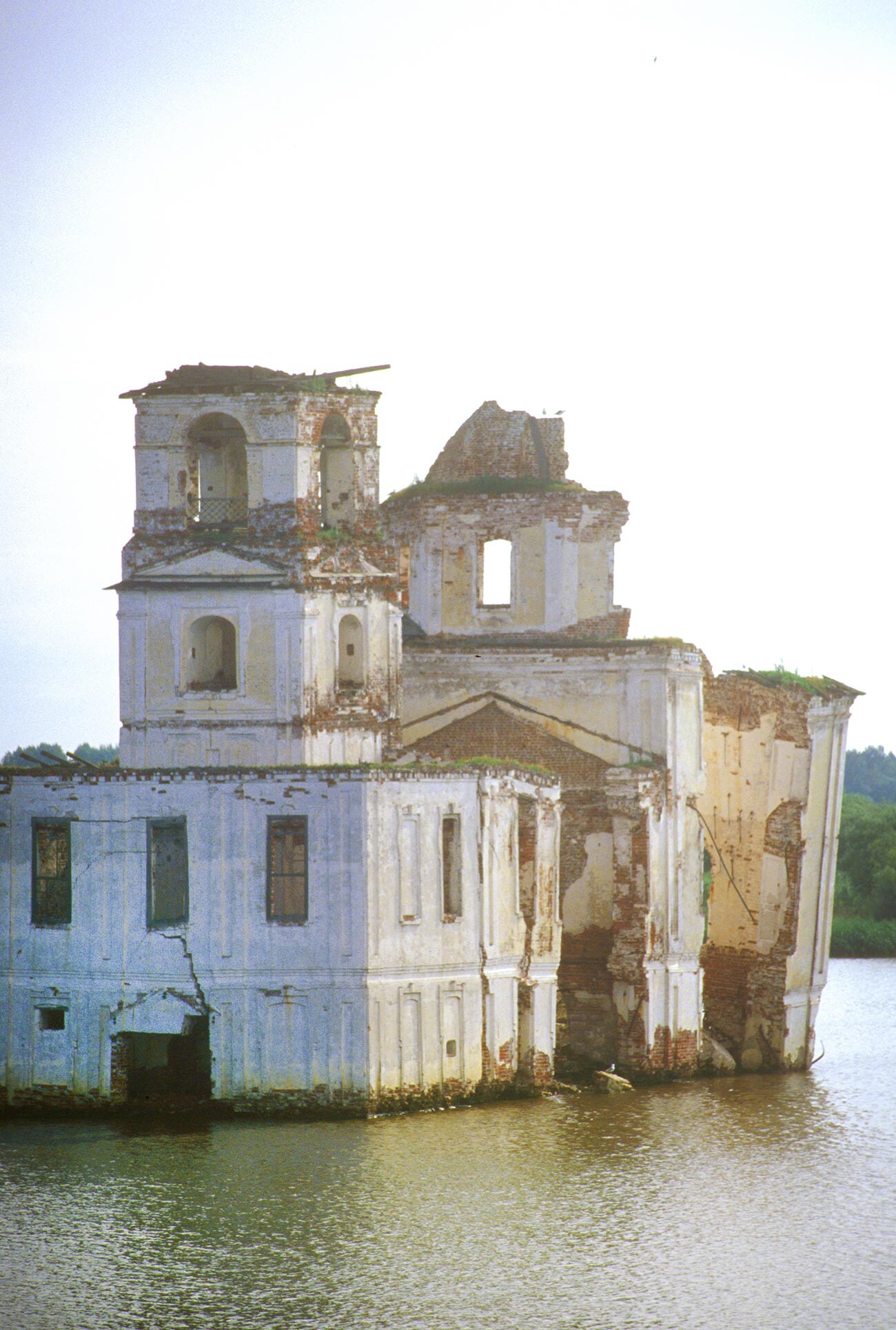 The Nativity Church was apparently built in stages over an extended period from 1788 to 1820. Its design followed the so-called “ship” form of a cube-like main structure and a lower refectory extending to the west with a bell tower (the prow of the “ship”) attached to the west end. 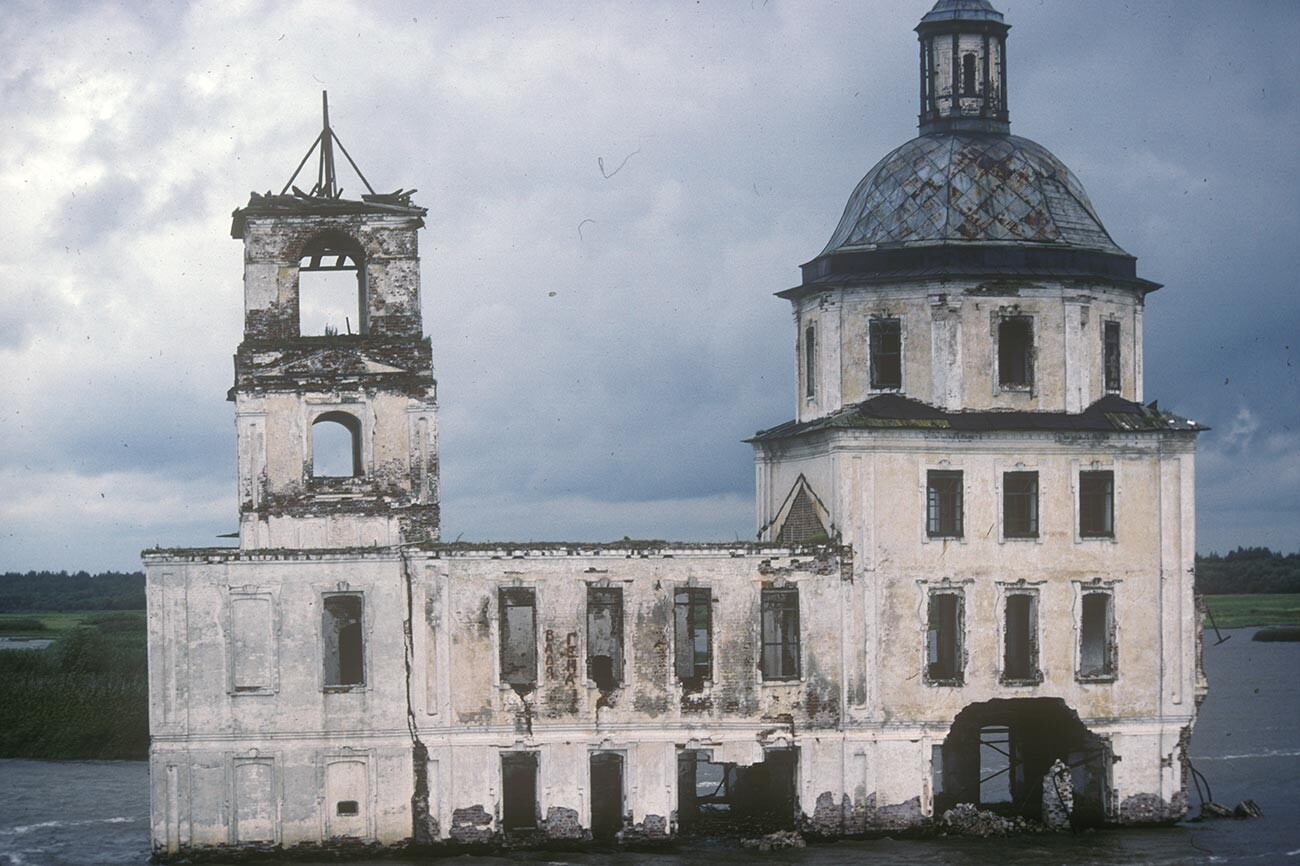 The ground level had a main altar dedicated to the Nativity of Christ, with two additional altars dedicated to Sts. Peter and Paul and to St. Nicholas in the refectory extension in the west part. The church’s upper section, built in the early 19th century and consecrated in 1820, contained an altar to the Resurrection of Christ. 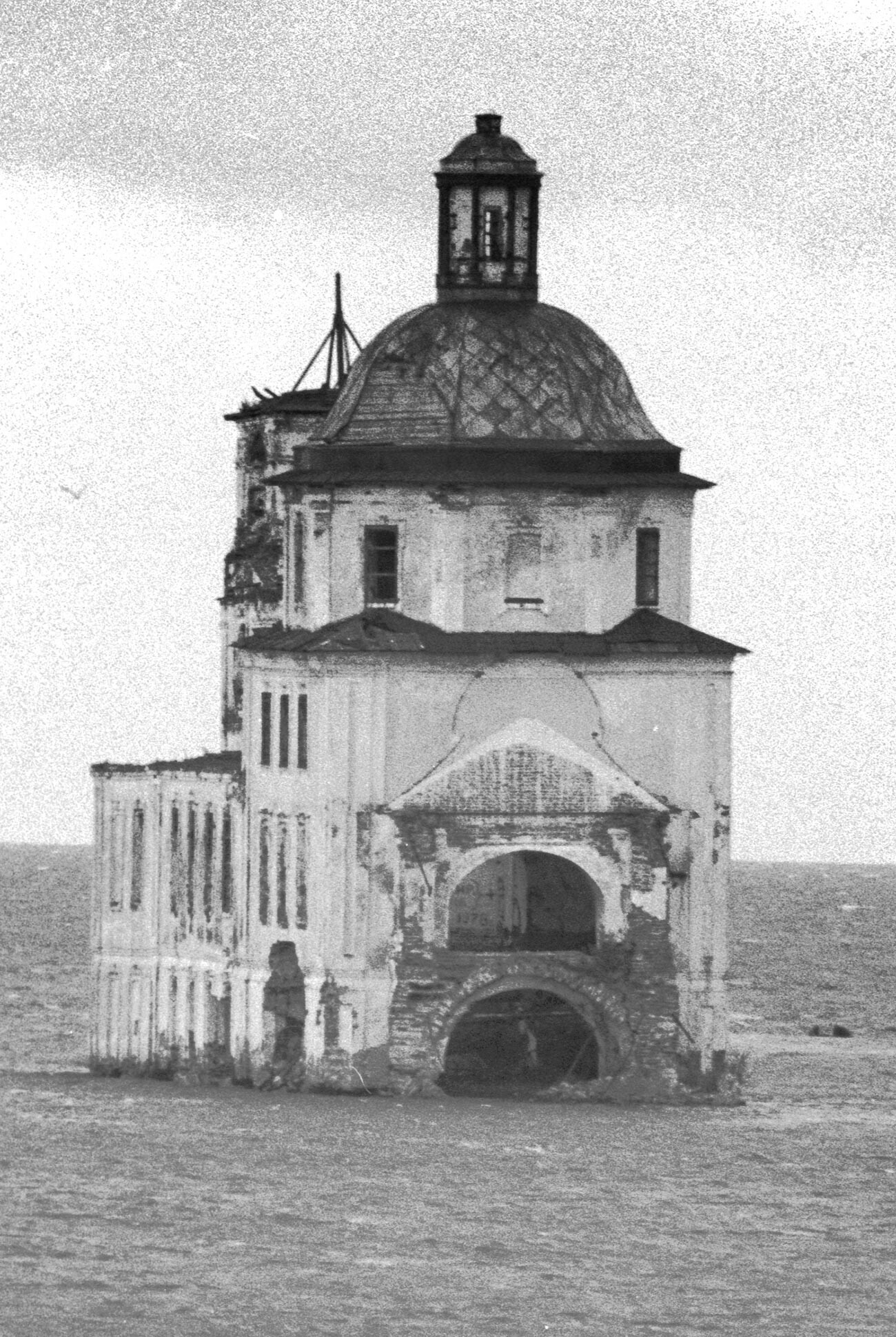 Krokhino. Church of the Nativity. East view with outlines of the apse. August 8, 1991

The Nativity Church reflects a simplified baroque style that lasted much longer in the provinces than in St. Petersburg and Moscow. In these major cities, church design as early as the 1760s had already begun to follow the neoclassical style favored by Catherine the Great. 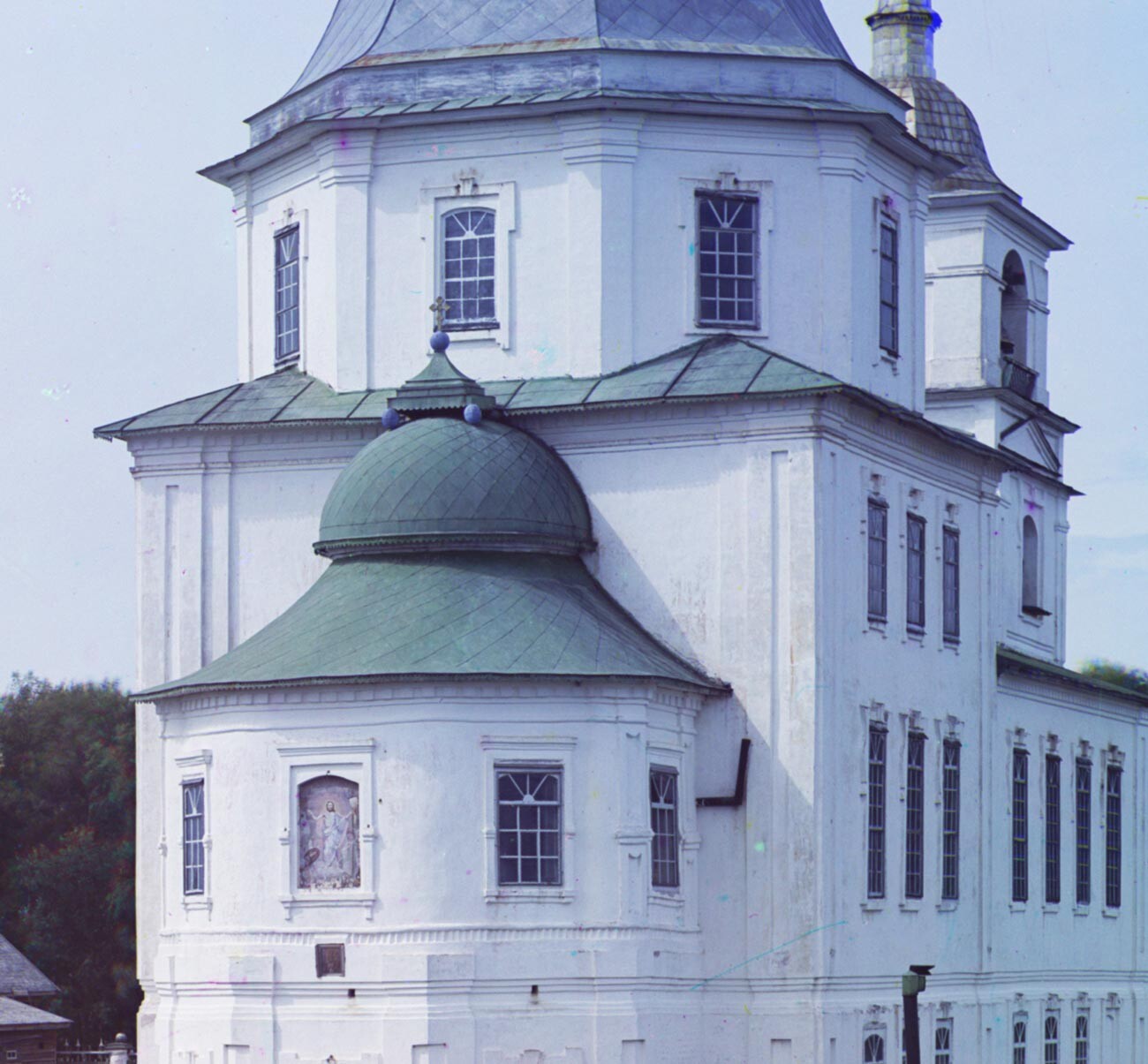 The main structure was crowned with an octahedron supporting a bulbous roof, an octagonal “lantern” and a single dome. Interestingly, that lantern – an architectural term for a structure at the summit of a dome – probably saved the church from demolition. 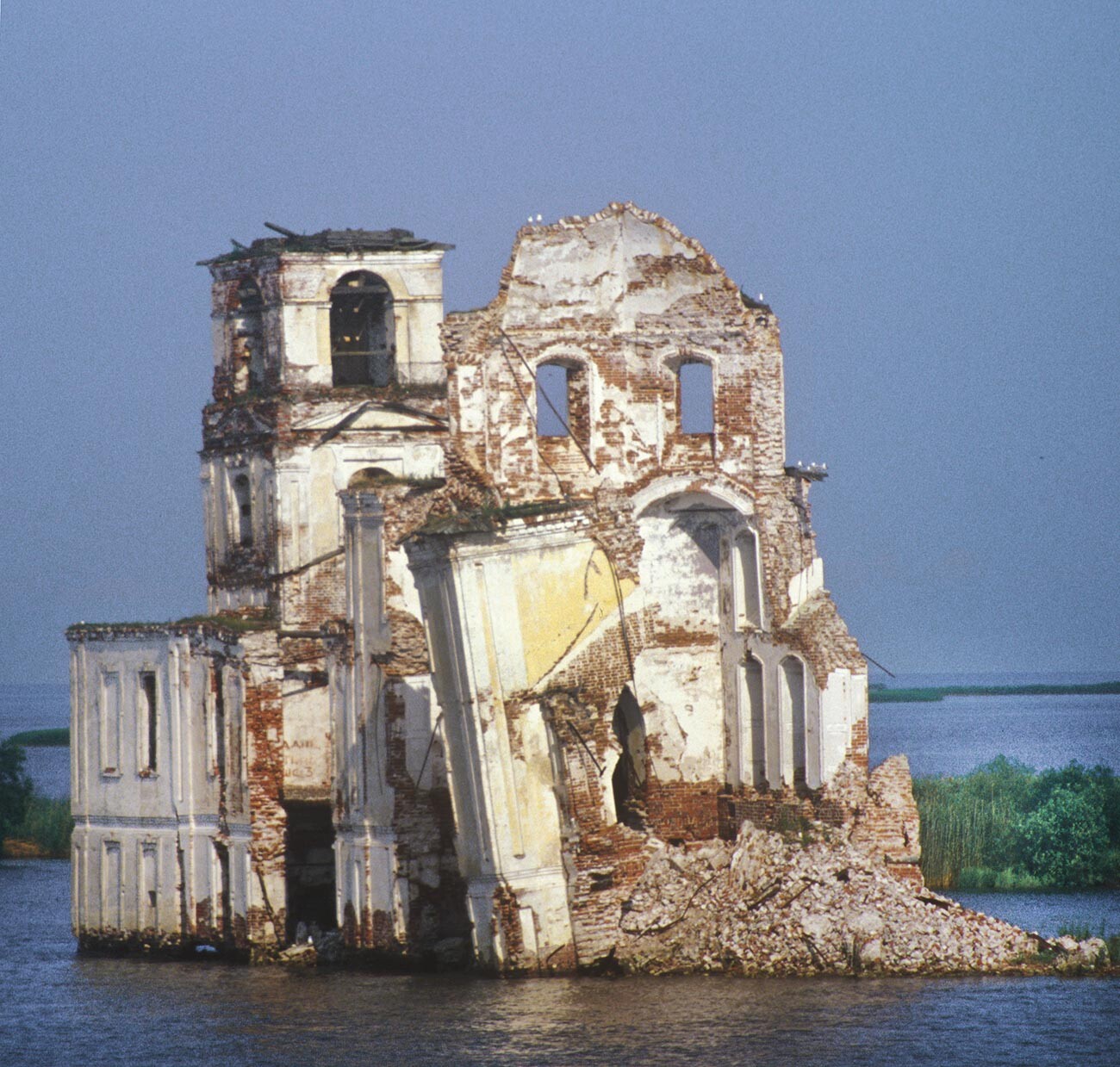 In 1953, local authorities decided to place a signal light — “lantern” in a literal sense – on the church as a navigational guide when planning for the Sheksna Reservoir waterway had already begun. The light, which ceased functioning in the early 1970s, marked the point where the Sheksna River flowed out of White Lake. 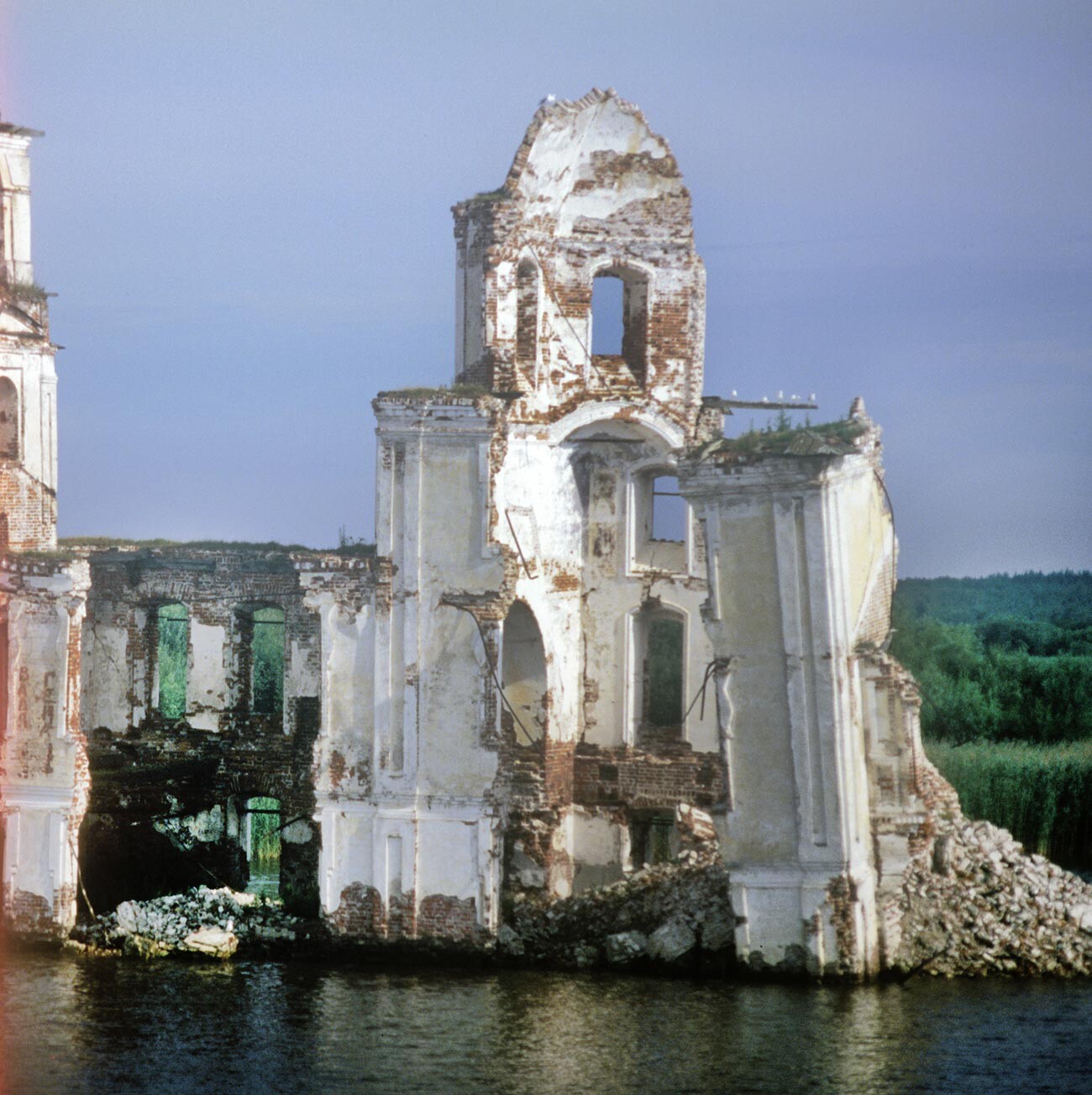 Krokhino. Church of the Nativity. South view with only surviving portions of west and north walls of main structure. Southeast corner on verge of collapse. July 14, 2007

There are many interesting details in Prokudin-Gorsky’s striking photograph, taken from the northeast. In the foreground is a granite embankment and plank bridge over a small canal that led to the Sheksna (not visible to the left of the photograph). A small boat moored at the bridge — and an even smaller, green boat at the gate – indicates that access to the church was possible from the river.

The three-part gate structure, crowned with crosses slightly askew, contains traces of a mural of the Ascension in its central arch. The gate connects an iron fence enclosing the church territory. 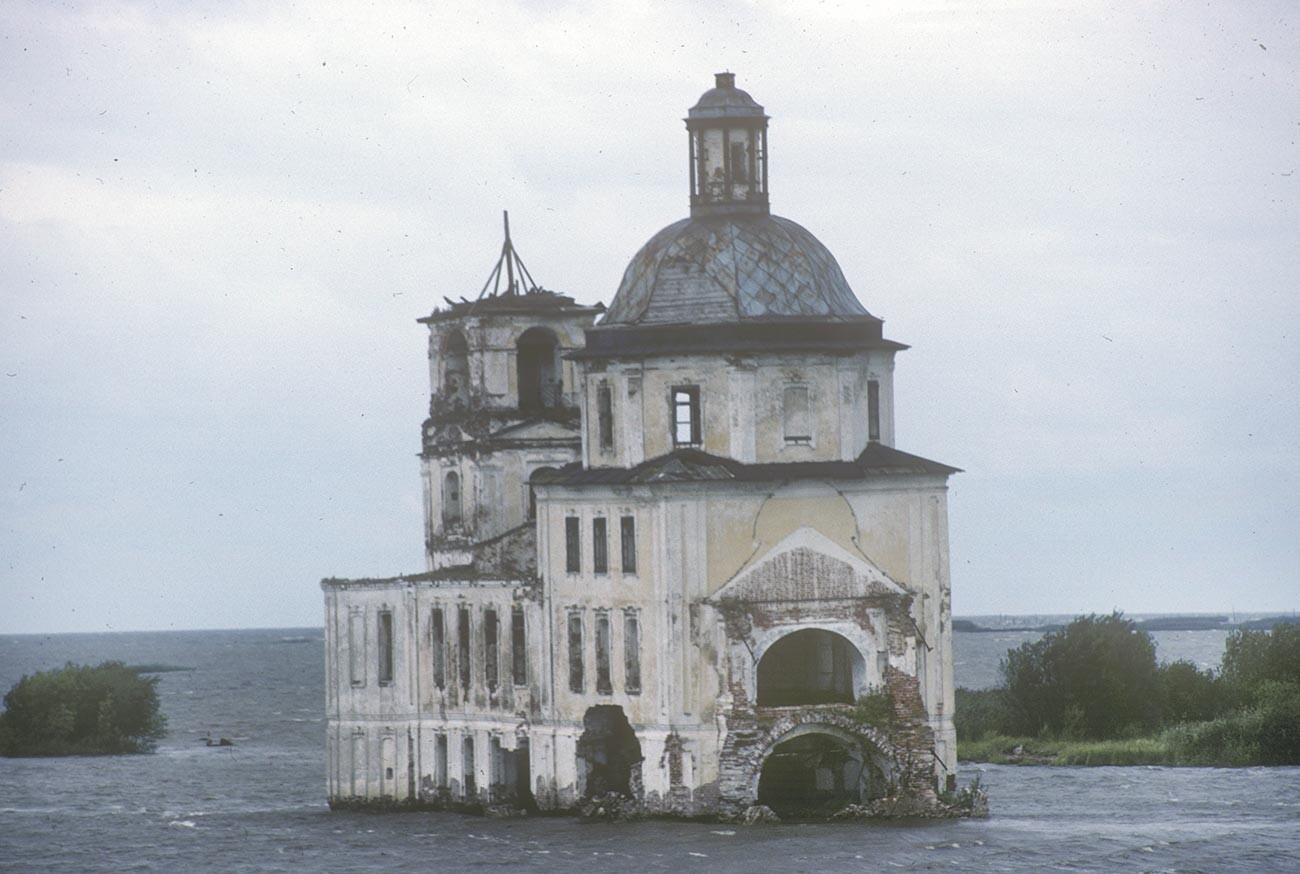 Krokhino. Church of the Nativity. Southeast view with outlines of the apse on the east wall. August 8, 1991

Prokudin-Gorsky’s view focuses on the polygonal apse (always in the east) that contained the primary altars for both lower and upper levels. The end of the apsidal structure is graced with framed frescoes on both levels. The lower painting displays the Nativity, while the upper depicts the Resurrection — corresponding to the respective altar dedications. 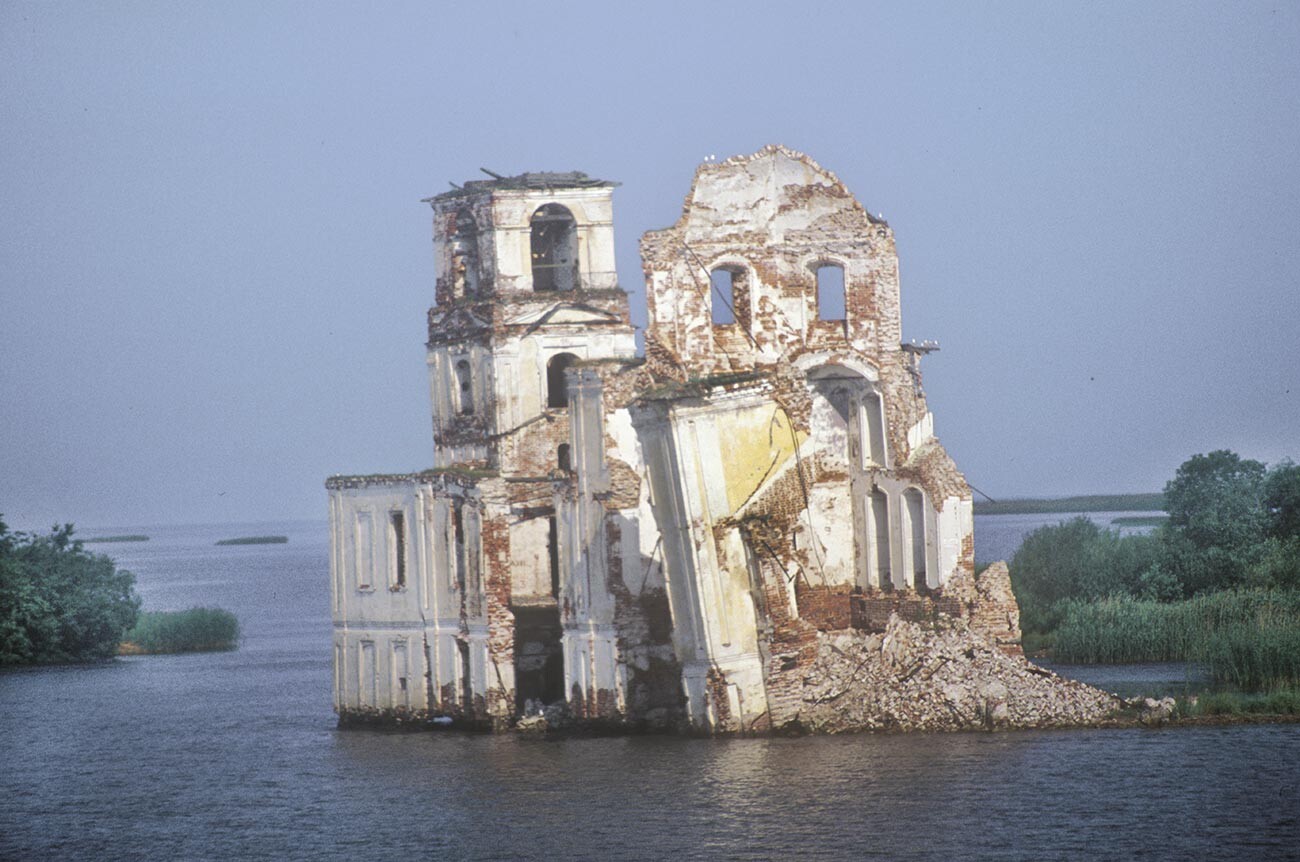 A revealing prosaic detail in Prokudin-Gorsky’s photograph is the exhaust pipe that extends from the right side of the apse on both the lower and upper level. Each pipe would have connected to a small wood-burning stove for heating the apse during the long cold and damp winters. Such two-storied churches usually held services only in the lower (more easily heated) part during the winter. 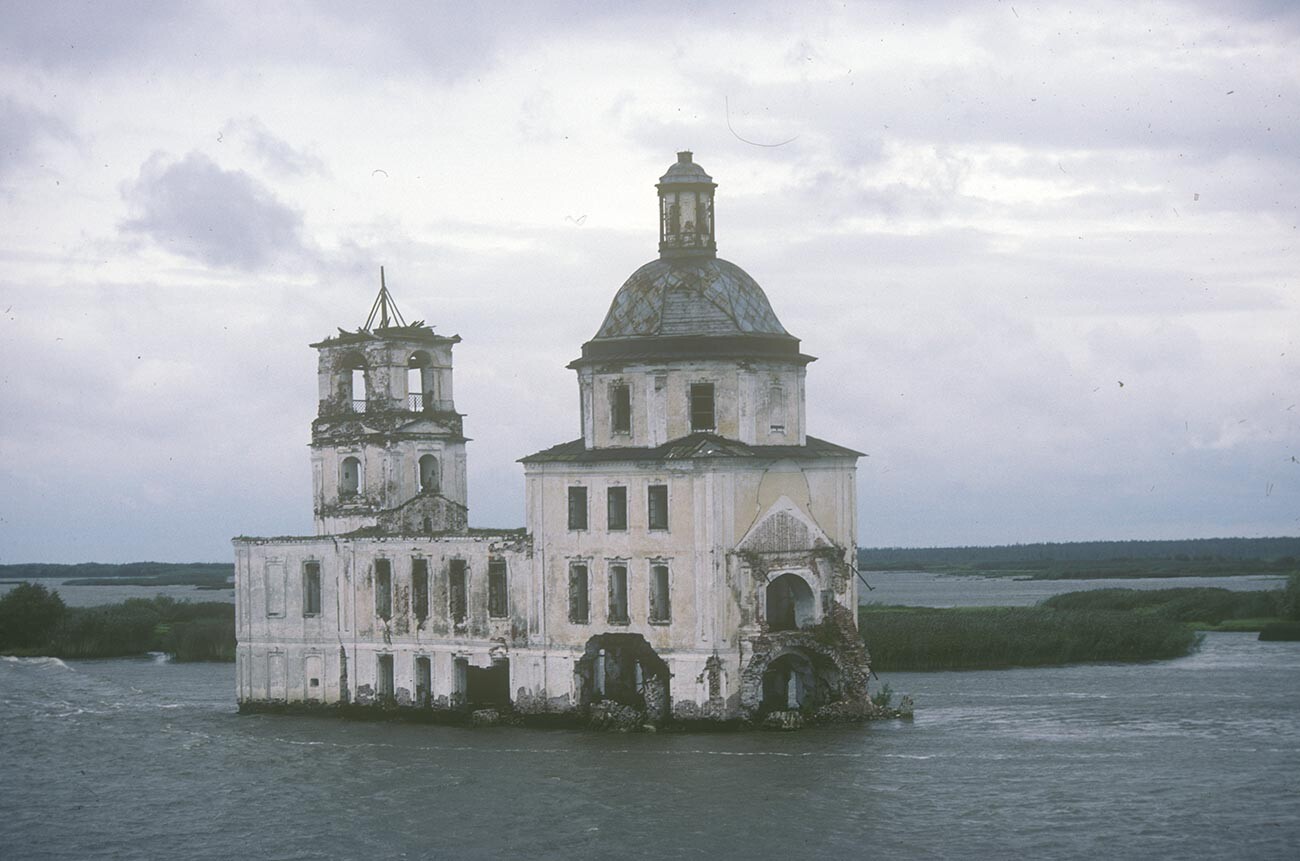 My photographs from August 1991 show the apse already collapsed, although its outlines are visible on the east wall. This view also clearly shows the interior division between lower and upper levels. The photographs taken 16 years later, in July 2007, dramatically reveal the collapse of the roof and dome, as well as most of the east half of the main structure, reduced to a mound of bricks. The southeast corner was still standing in 2007, but with a perilous lean. (It later collapsed.) 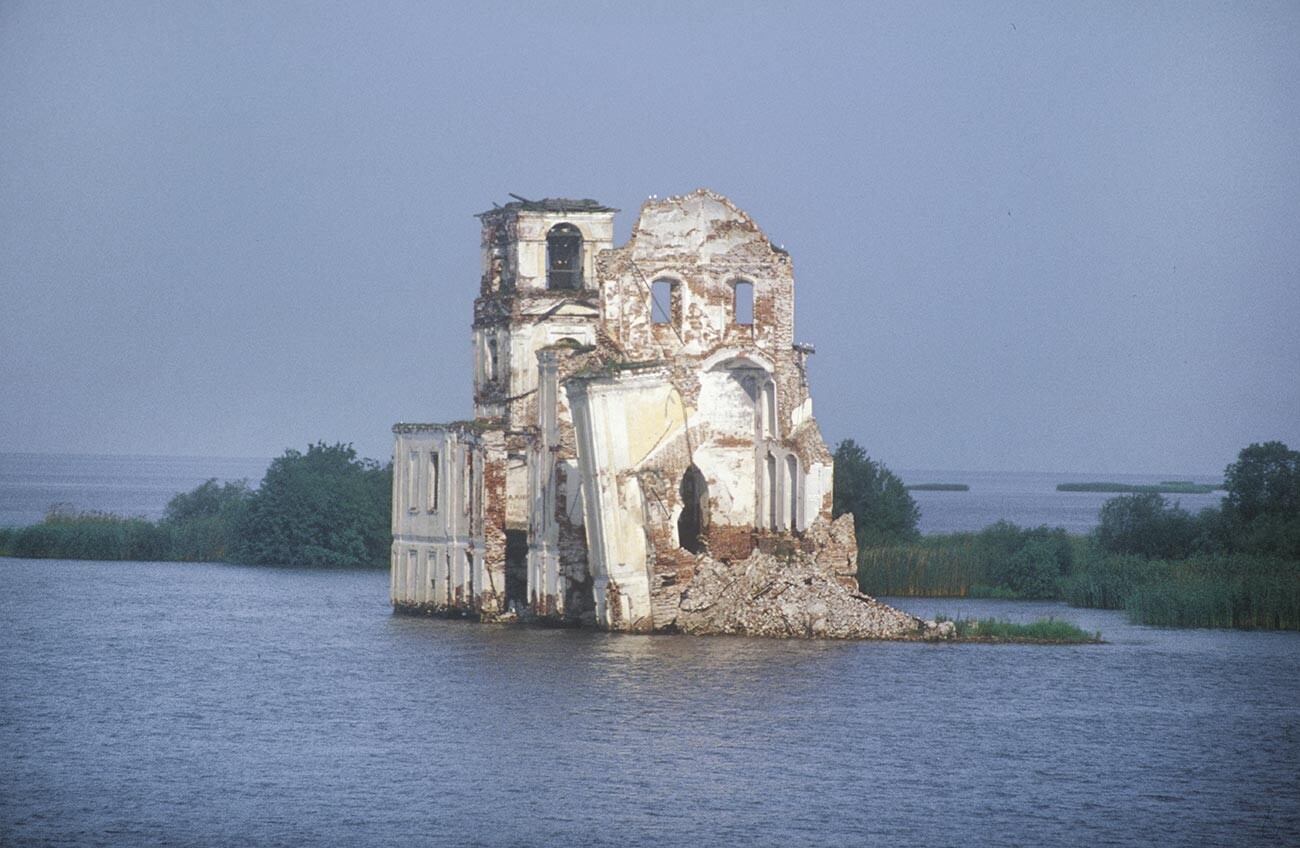 For the past several years a public initiative has endeavored to preserve the remains of the church, including the creation of a small levee to protect the foundation. Nonetheless, gathering the funds for structural restoration is a daunting task. Prokudin-Gorsky’s photograph is all the more valuable for recording a church that is gradually slipping into the waters. 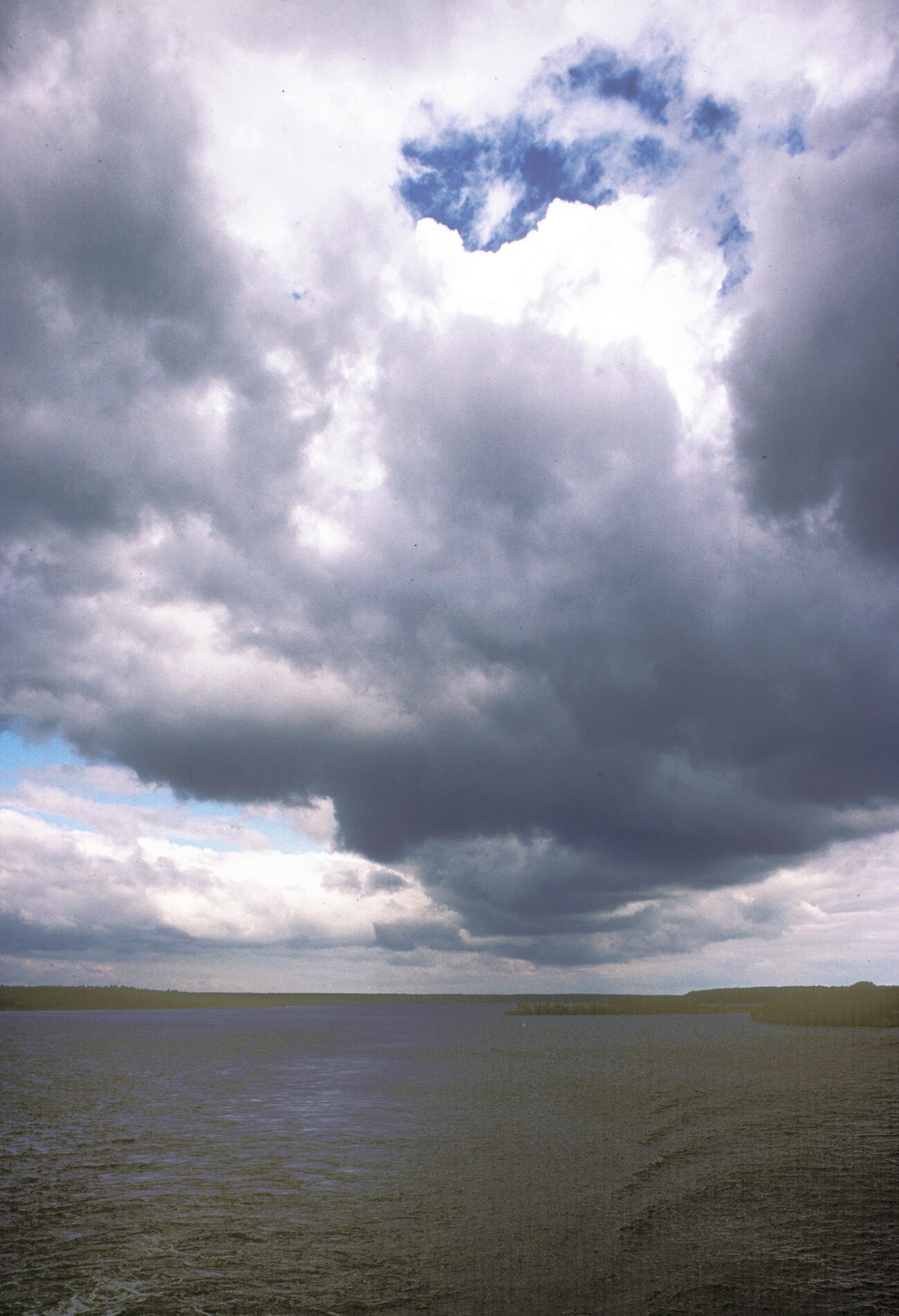 In the early 20th century, the Russian photographer Sergei Prokudin-Gorsky developed a complex process for color photography. Between 1903 and 1916, he traveled through the Russian Empire and took over 2,000 photographs with the process, which involved three exposures on a glass plate. In August 1918, he left Russia and ultimately resettled in France where he was reunited with a large part of his collection of glass negatives, as well as 13 albums of contact prints. After his death in Paris in 1944, his heirs sold the collection to the Library of Congress. In the early 21st century, the Library digitized the Prokudin-Gorsky Collection and made it freely available to the general public. A few Russian websites now have versions of the collection. In 1986, the architectural historian and photographer William Brumfield organized the first exhibit of Prokudin-Gorsky photographs at the Library of Congress. Over a period of work in Russia beginning in 1970, Brumfield has photographed most of the sites visited by Prokudin-Gorsky. This series of articles juxtaposes Prokudin-Gorsky’s views of architectural monuments with photographs taken by Brumfield decades later.