Travel
William Brumfield
Historian and architecture expert William Brumfield discovers the sites and history of one of the most notable religious ensembles in the Russian north. 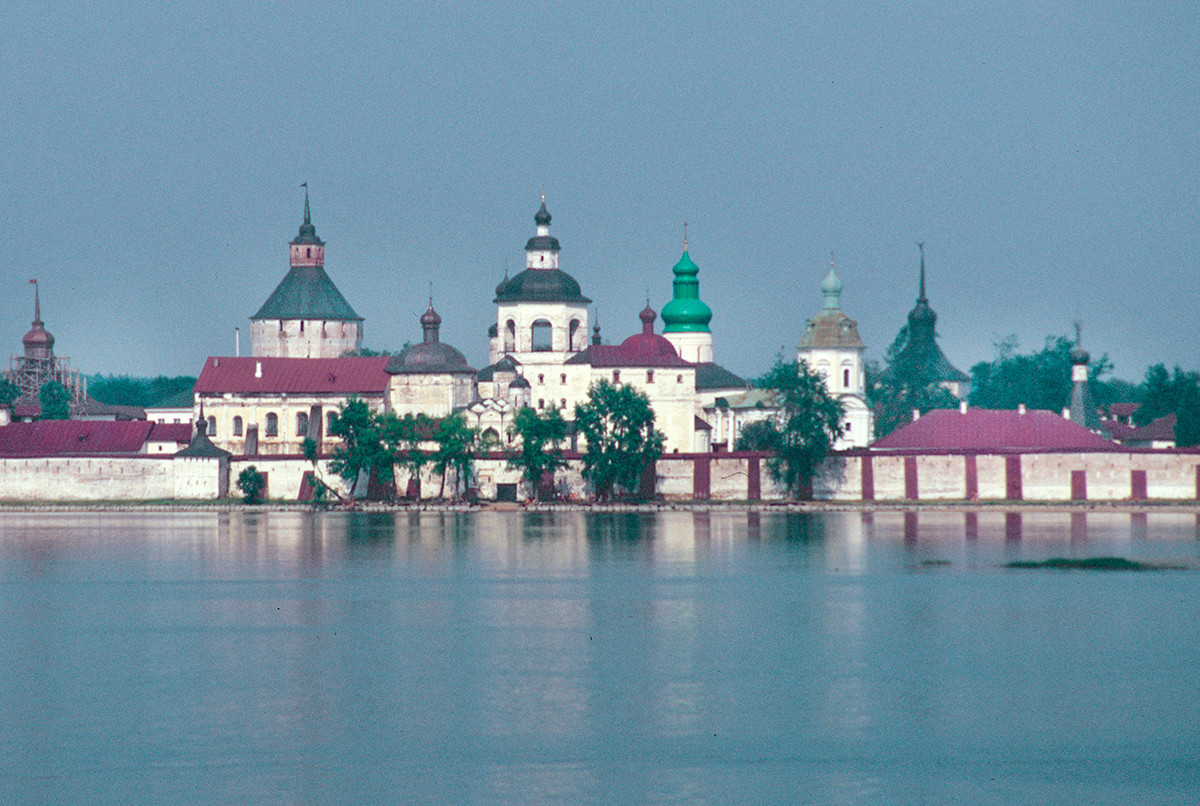 During the 14th-century revival of monasticism in Moscow under the direction of St. Sergius of Radonezh, pioneering monks sought remote northern areas as a test of their faith and dedication. At the same time, Muscovite princes supported their efforts, which not only spread the Orthodox faith but also consolidated Moscow's territorial expansion into the rich forests of the far north. One of the most distinctive monuments dating from that time is the St. Kirill Belozersky Monastery. With its massive walls, brick towers and array of churches, this monastery was one of the most impressive sights in the Russian north. Its location, on Siverskoe Lake near the Sheksna River, was both picturesque and strategically important. 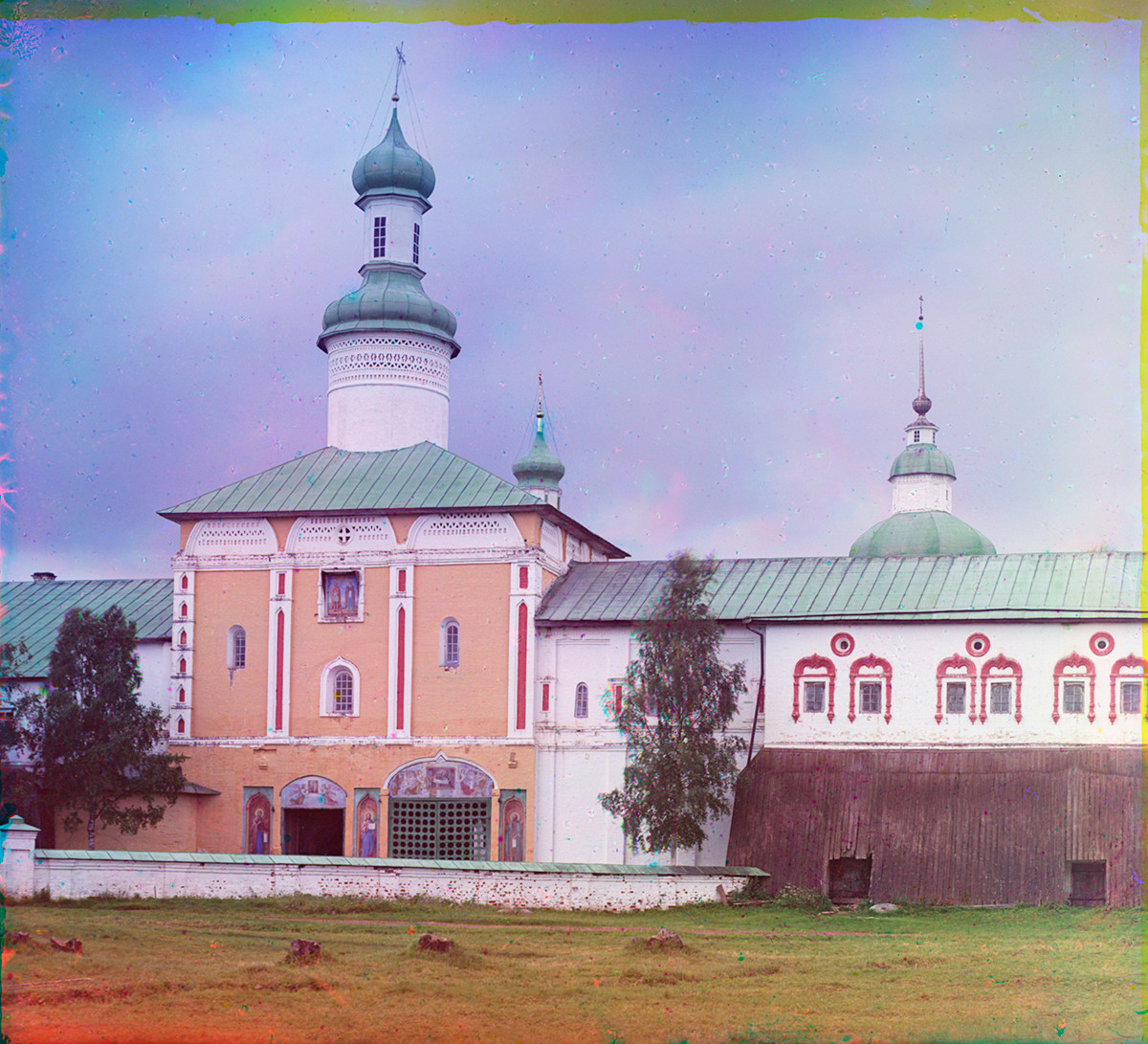 Inspired by a vision 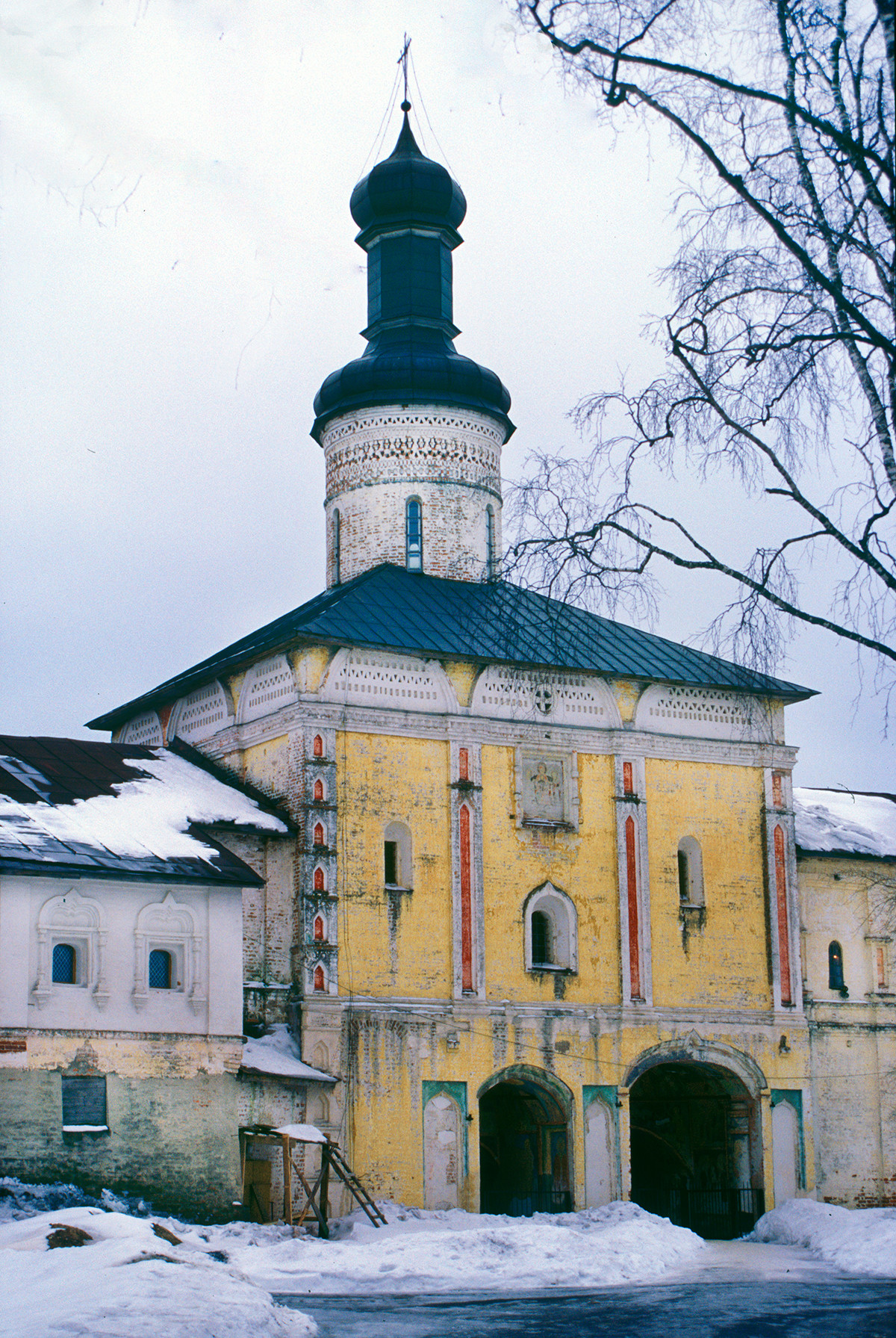 The founding of the monastery can be dated to 1397, when the monk Kirill (Cyril) of Belozersk (1337-1427) arrived at Siverskoe Lake and made a cave dwelling for himself. Kirill had taken monastic vows in Moscow’s powerful Simonov Monastery and became of disciple of St. Sergius, who supported his determination. Inspired by a vision of the Virgin Mary, he made his way to the region of Beloe Ozero (White Lake) and from there to Siverskoe Lake. 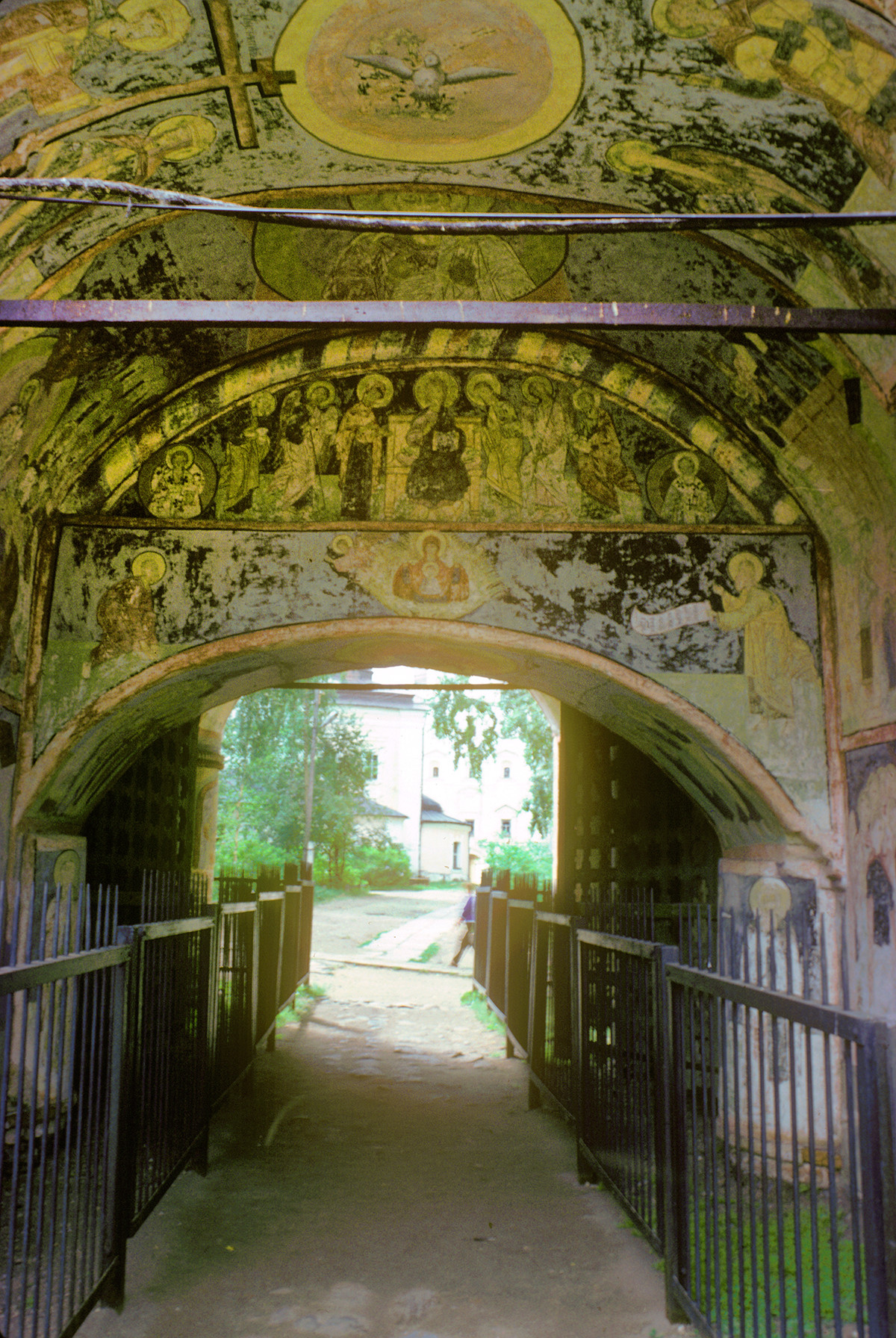 In the turbulent early 15th century, the St. Kirill Dormition Monastery played a significant role in maintaining Moscow’s dynastic stability. Consequently, the monastery received donations that by the 16th century made it one of the largest in Muscovy, second in size to the Trinity-St. Sergius Monastery near Moscow. 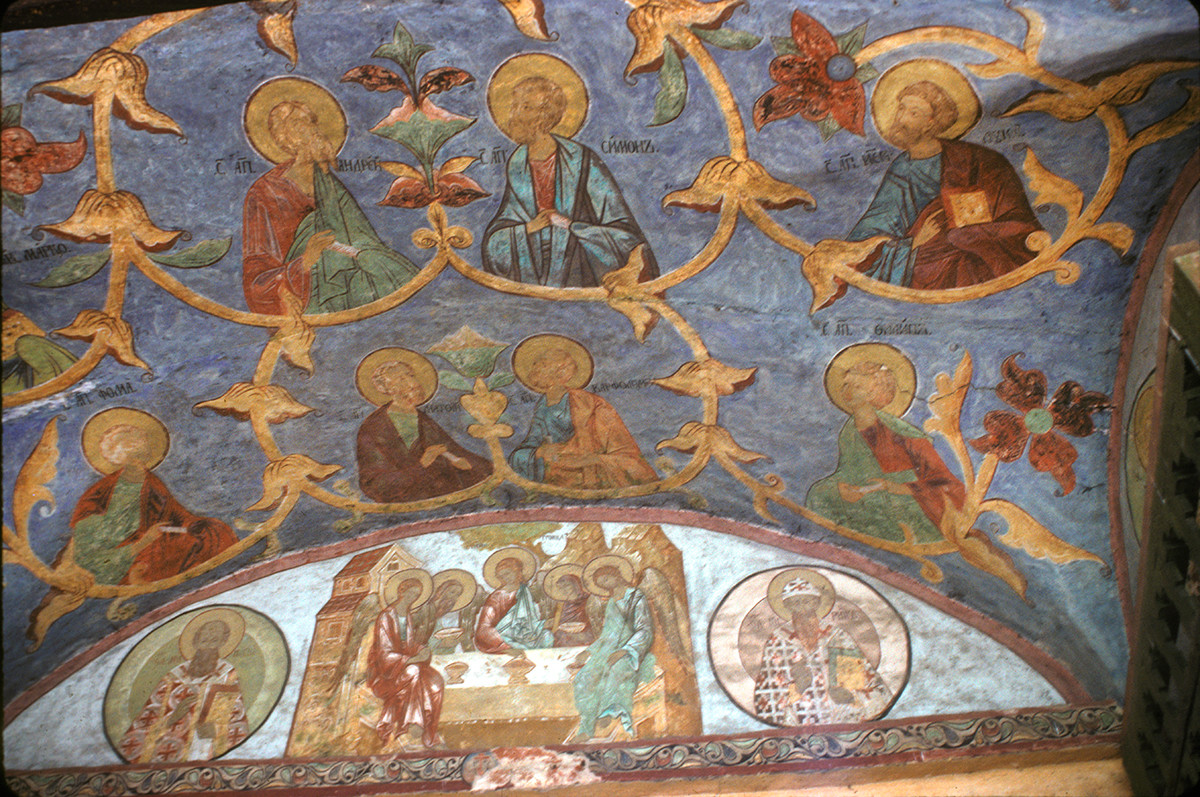 As usual in medieval Russia, the original monastery was built of logs. The monastery’s first structure to be built of brick and stone was the Dormition Cathedral, begun in 1496 and expanded with small churches attached on its east side over the next two centuries.

Major support for the monastery came from Basil (Vasily) III (1479-1533), grand prince of Moscow, who in 1528 made a pilgrimage to the monastery with his second wife, Elena Glinskaya, to pray for the birth of a son and heir. Basil subsequently sponsored two brick churches in the monastery, including the Church of the Decapitation of John the Baptist, which became the nucleus of another monastery. The dedication to John the Baptist was associated with the birth of his son Ivan (John) IV in 1530. 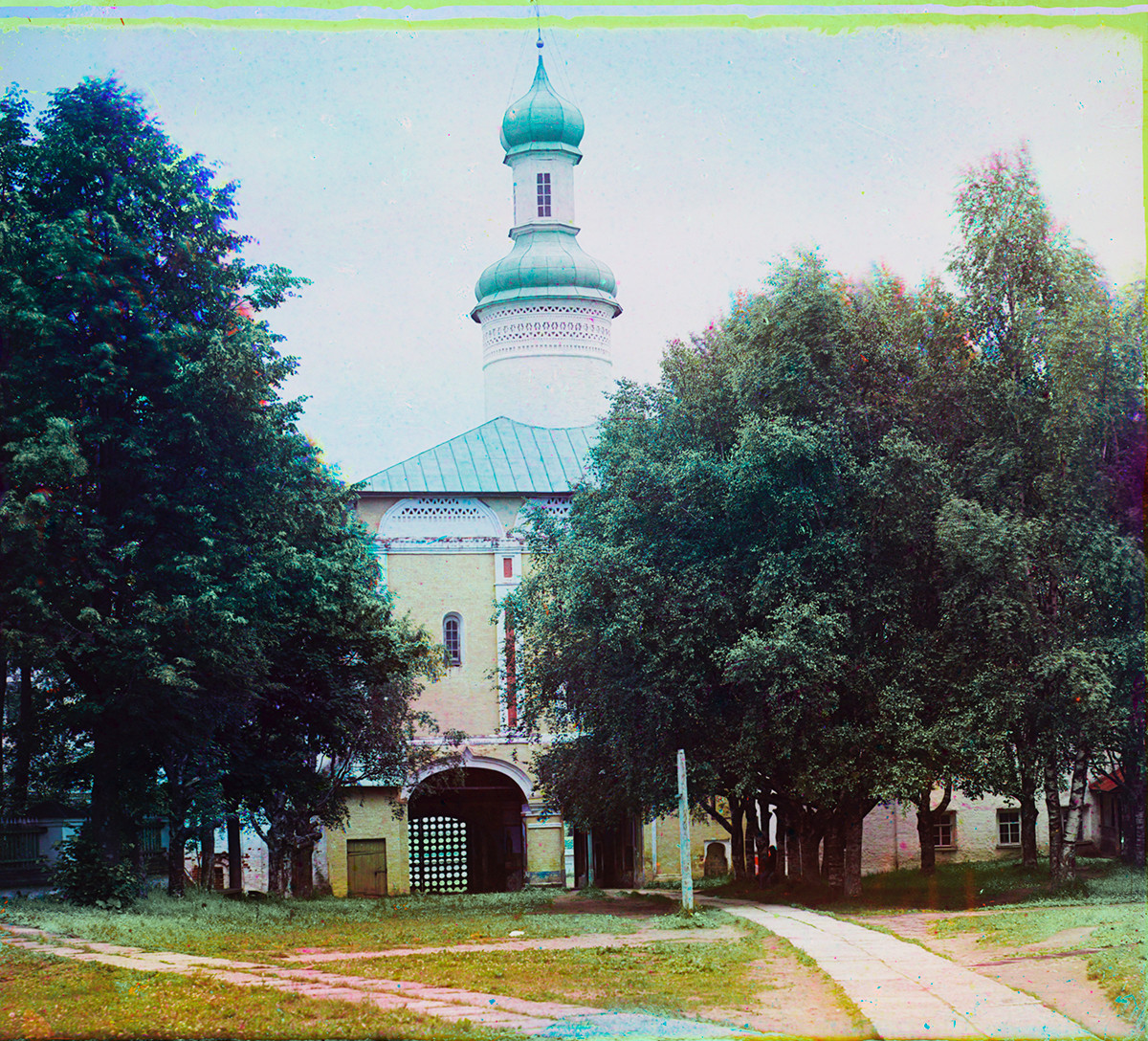 Thus, the monastery founded by St. Kirill came to consist of two monasteries—dedicated respectively to the Dormition and to John the Baptist, as well as a settlement for lay workers. Continued donations from Ivan IV (the Terrible) and the Moscow court made the monastery one of the largest in Russia, surpassed only by the Trinity St. Sergius Monastery. 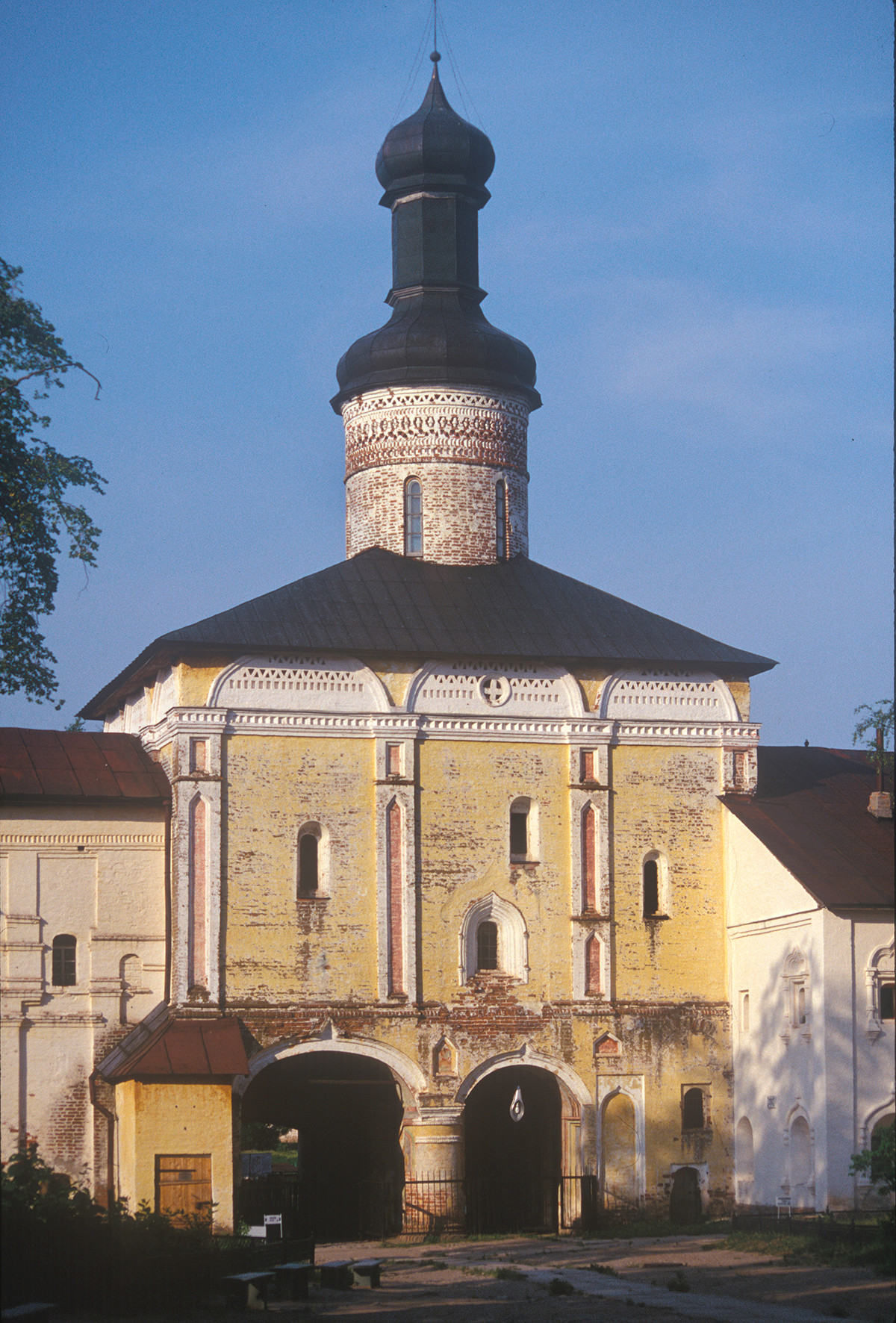 The entire monastic complex was protected by a system of walls that underwent several stages of expansion. The Holy Gate, the main entrance to the Dormition Monastery from the north, was built in 1524 and consisted of two passages, the larger of which was opened on major holidays to accommodate the increased number of pilgrims. In 1585, the passages were painted with frescoes depicting devotional images, including medallions of saints linked by an intertwining vine - similar to the Tree of Life motif. 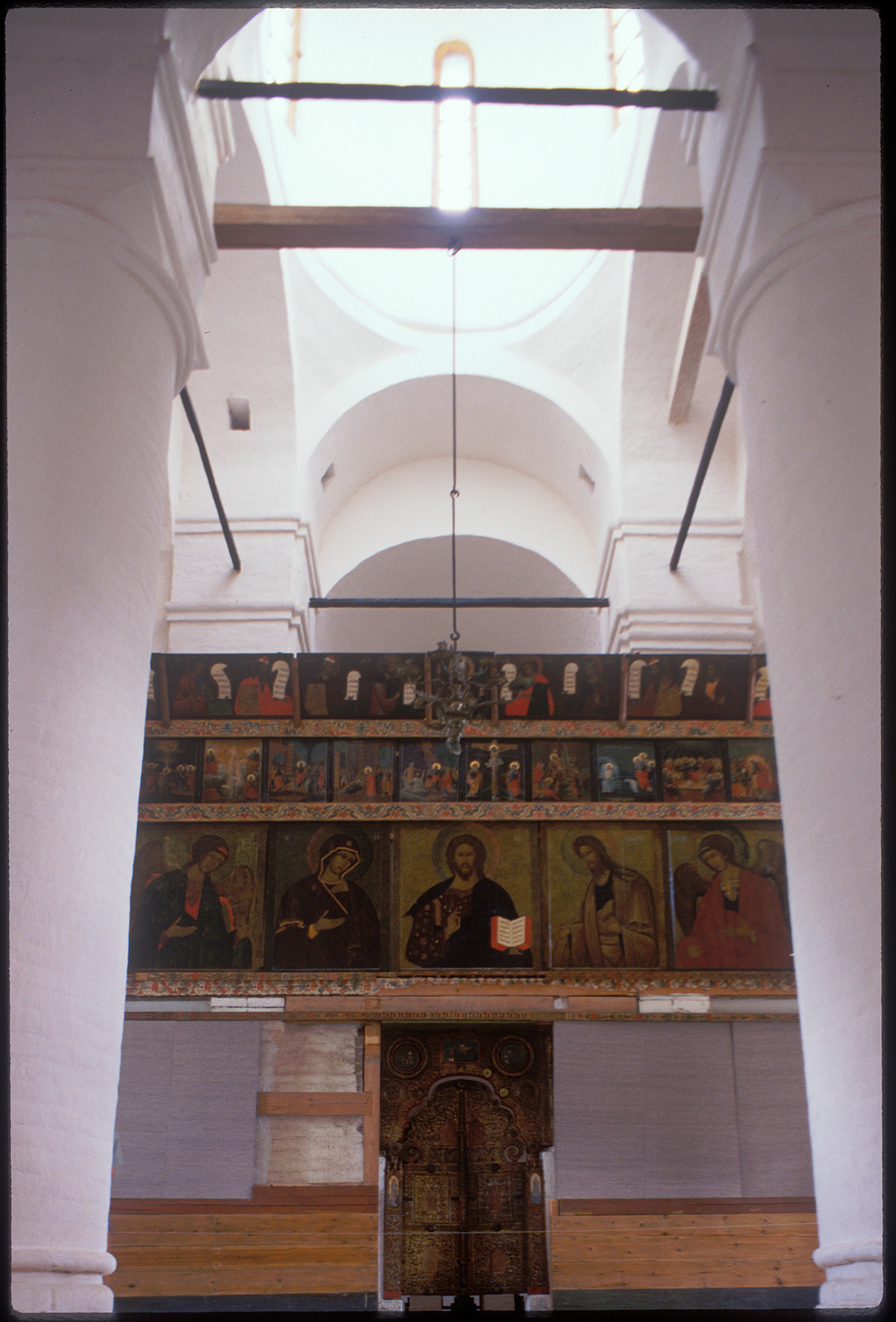 The Holy Gate provided the base for the construction in 1572 of the lyrically beautiful Church of St. John Climacus, which Prokudin-Gorsky photographed from the north and the south (inside the monastery). Dedicated to the Byzantine theologian and patron saint of Ivan the Terrible’s second son, Ivan (1554-81) the church had a secondary altar in its southeast corner dedicated to the warrior martyr Theodore Stratilates, patron saint of Ivan’s third son and successor, Fyodor (1557-98).

The façade of the St. John Church is divided by vertical strips into three bays over the two gate arches. At the top is a decorative brick band typical of church architecture in the ancient town of Pskov. Above its curved gables (zakomary), the roof line originally had two rows of decorative elements known as kokoshniki. 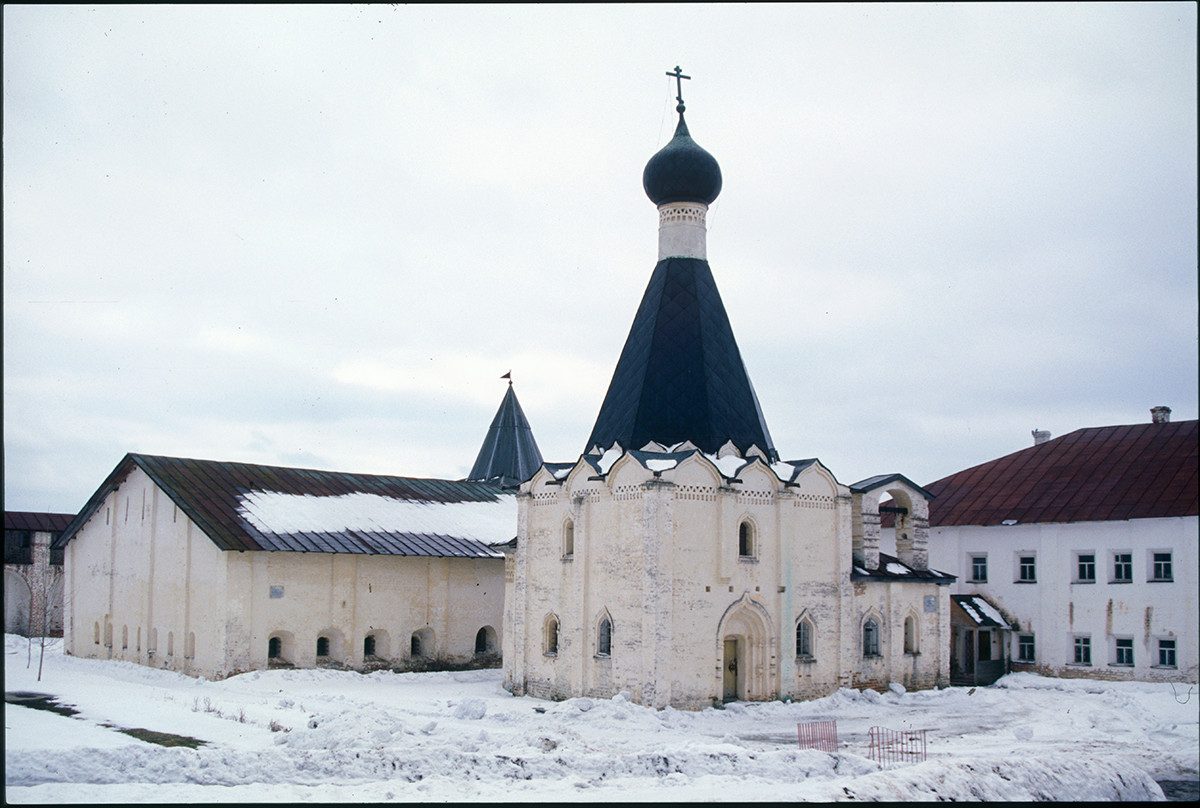 After fire damage in the 18th century, the roof was changed to a four-sloped cover and the cupola was replaced with a baroque form. Despite these changes, the church still serves as a beacon at the imposing entrance to the main monastery complex. Visible to the right in Prokudin-Gorsky’s north view is the Treasury Chamber, built i the 16th century and expanded in the 17th.

At the beginning of the 17th century, the monastery walls enabled a defense against marauding forces during a dynastic crisis and widespread conflict known as the “Time of Troubles.” A prolonged recovery began only after the establishment of the Romanov dynasty in 1613. 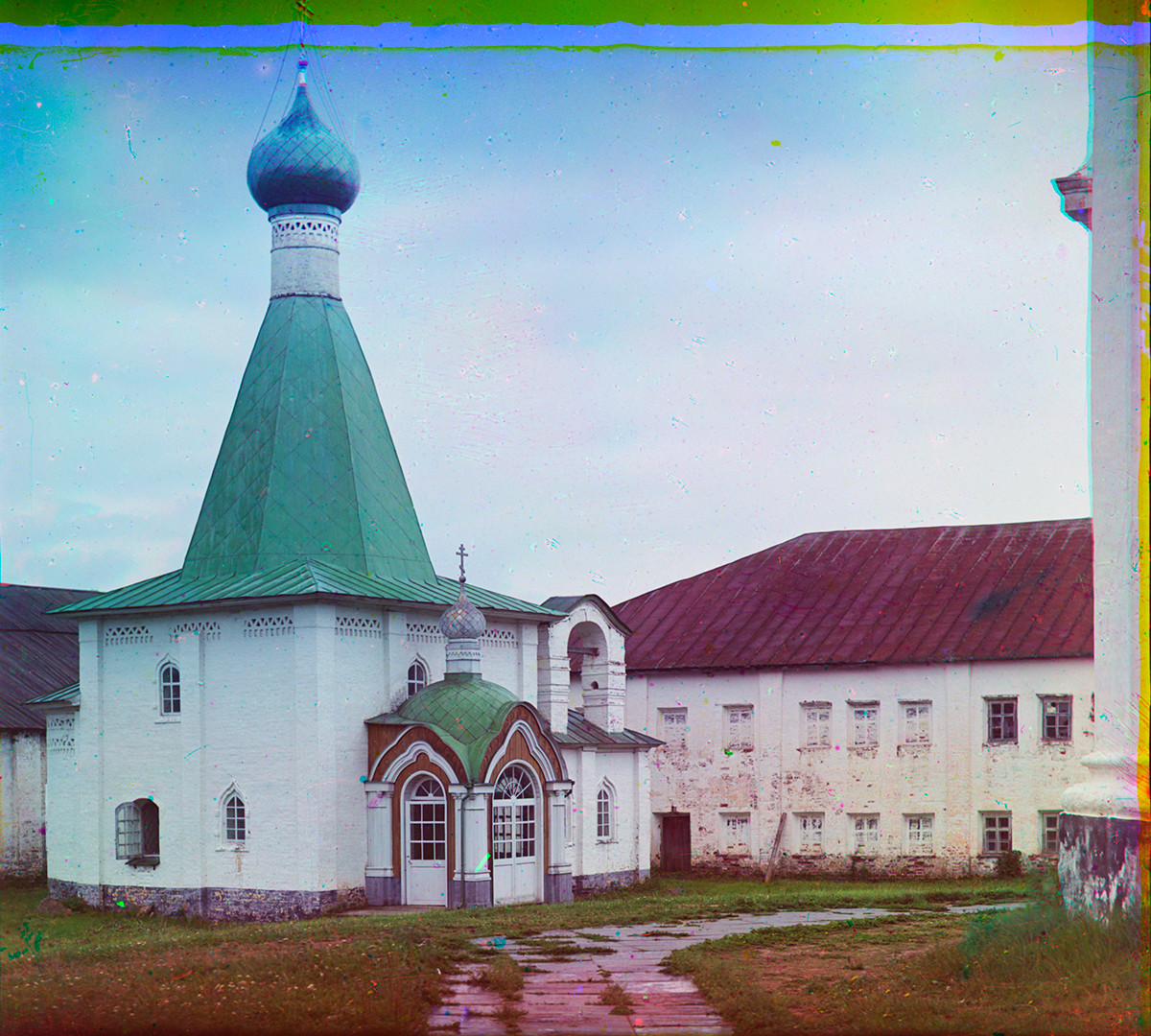 The middle of the 17th century witnessed modest additions to the monastery shrines, such as the hospital church dedicated to St. Euthymius the Great (1646), with its "tent" tower supporting a single cupola. The walls culminate in a decorative brick band that is especially noticeable above the apse on the east side. The Large Infirmary is visible in the background. 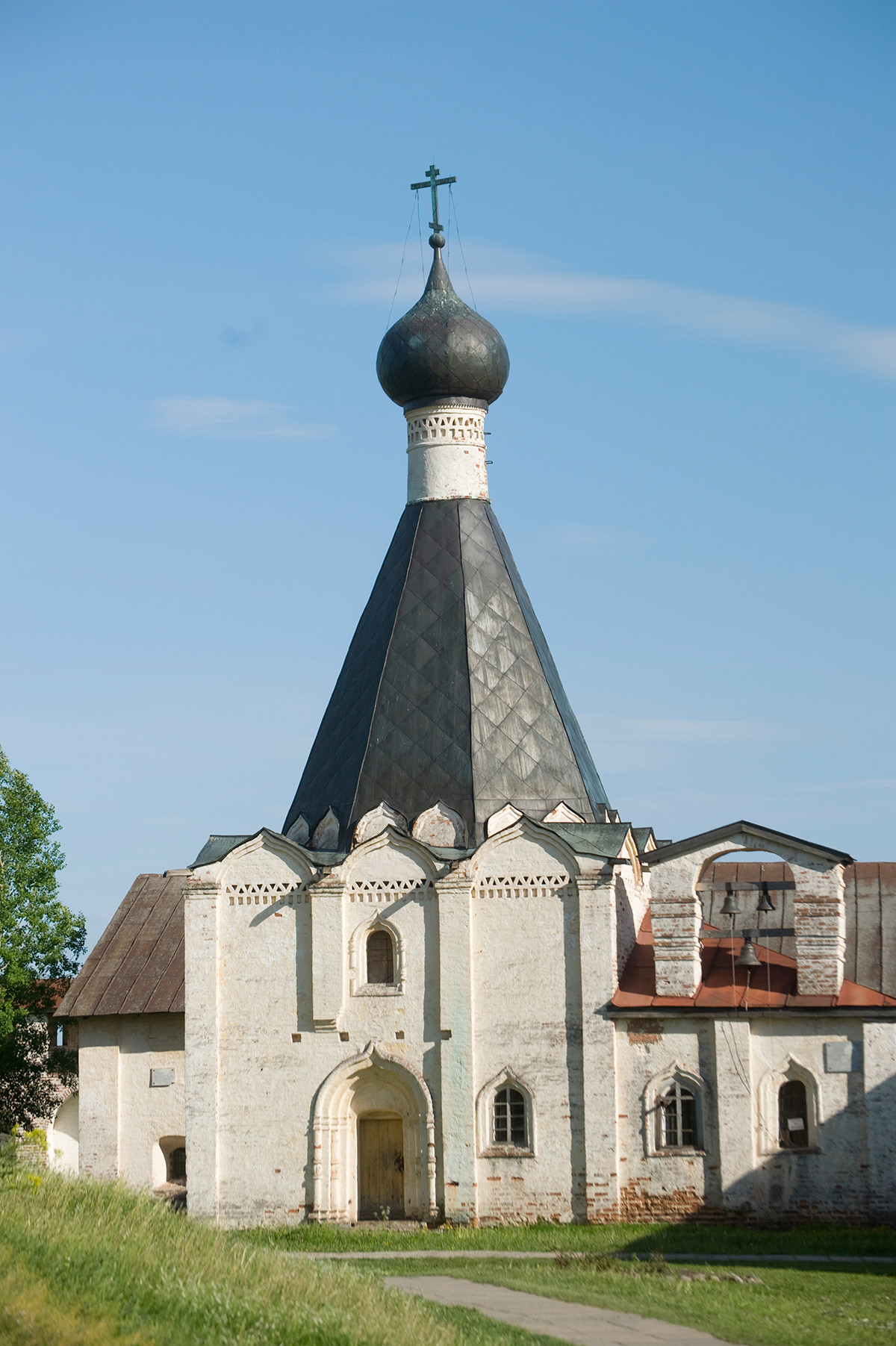 Although its distinctive tower is reminiscent of churches built a century earlier during the reign of Ivan, the basic structure of the St. Euthymius Church is close to that of the Church of St. Epiphanius of Cyprus, completed a year earlier at the northeast corner of the Dormition Cathedral to serve as the burial chamber of Prince Fyodor Telyatevsky.

From bulwark to museum 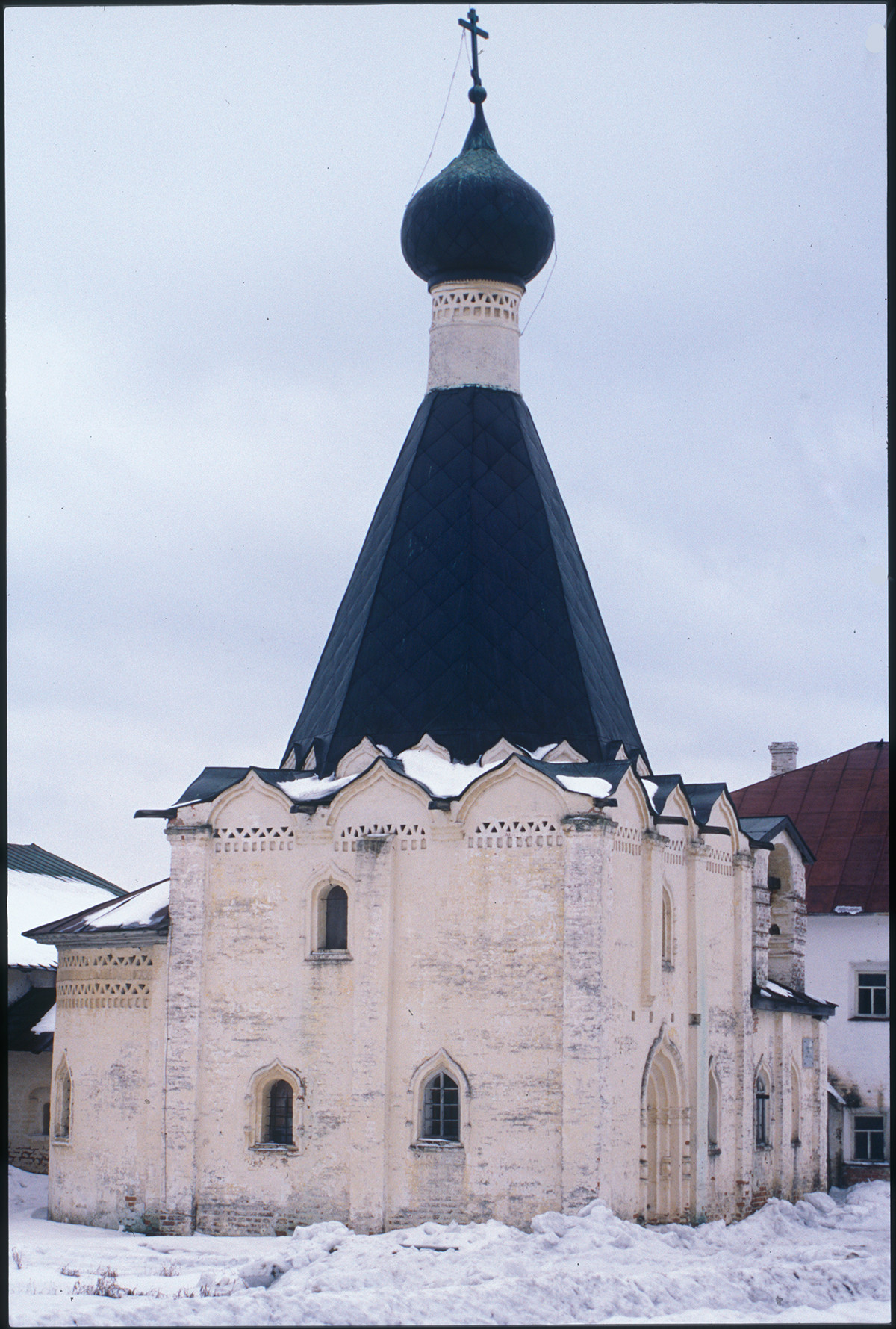 A surge in the monastery's fortunes occurred in the second half of the 17th century, when Tsar Alexis Mikhailovich decided to rebuild the monastery as an impregnable bulwark for Moscow's vital northern domains. Fortunately, no hostile army approached the citadel that had been expanded at such great effort. 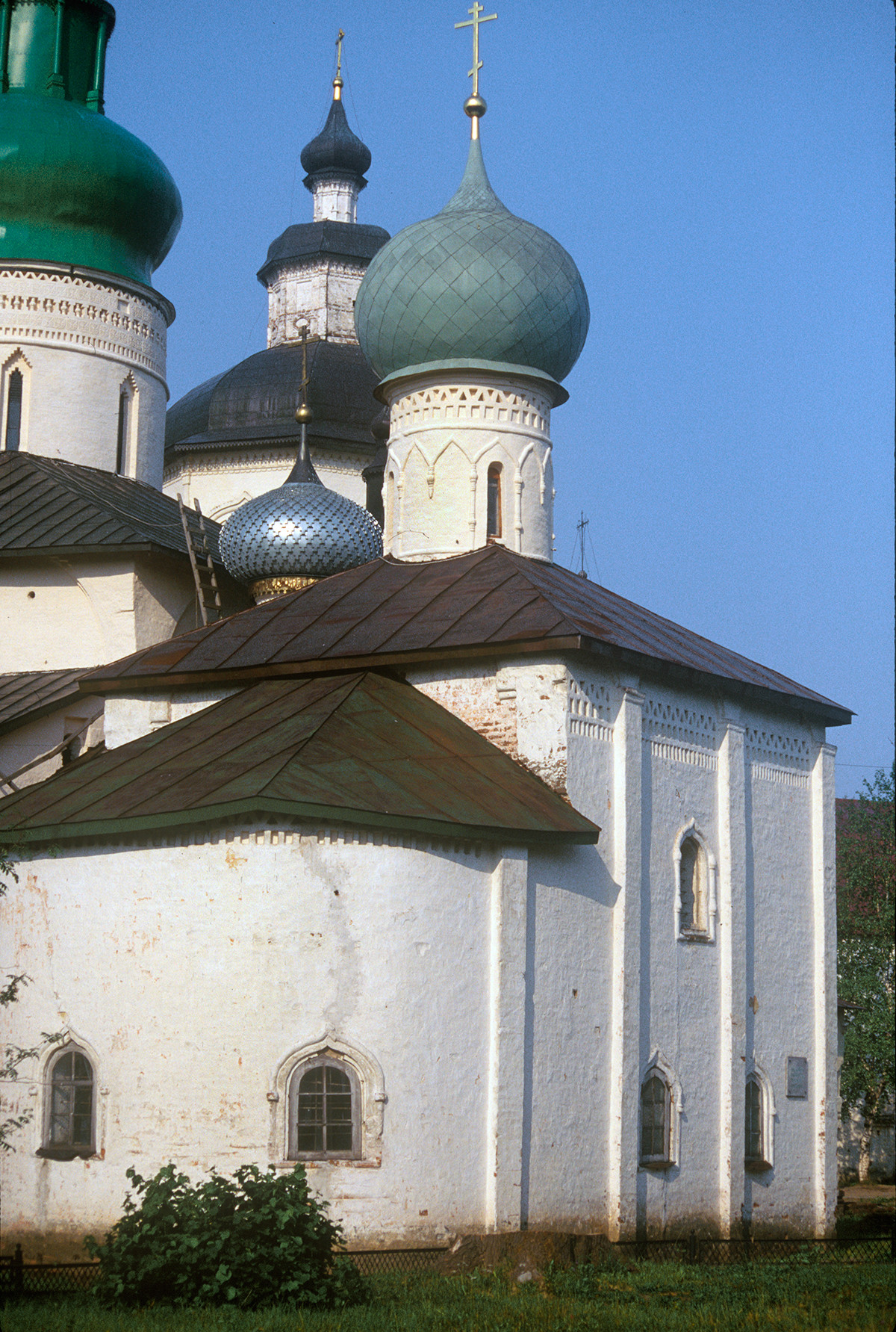 The waning strategic importance of the St. Kirill Monastery led to its neglect during the 18th and 19th centuries. In the late 19th century, a revival of interest in Russia’s medieval heritage led to restoration efforts that continued during the early Soviet period. In 1924, the first museum was established in the monastery. The onslaught of ideological repression in the 1930s undercut much of this work and led to material losses, such as the melting down of the monastery's remarkable bell ensemble.

After the Second World War, the museum within the St. Kirill Belozersk Monastery began to reclaim its cultural potential. The museum and the monastery territory have become a major repository of Russian cultural treasures, including an excellent gallery of historic religious art. Part of the monastery has now reverted to the use of the Orthodox Church. In 2017 the monastery celebrated its 620th anniversary, a mark of its enduring importance in Russian history. 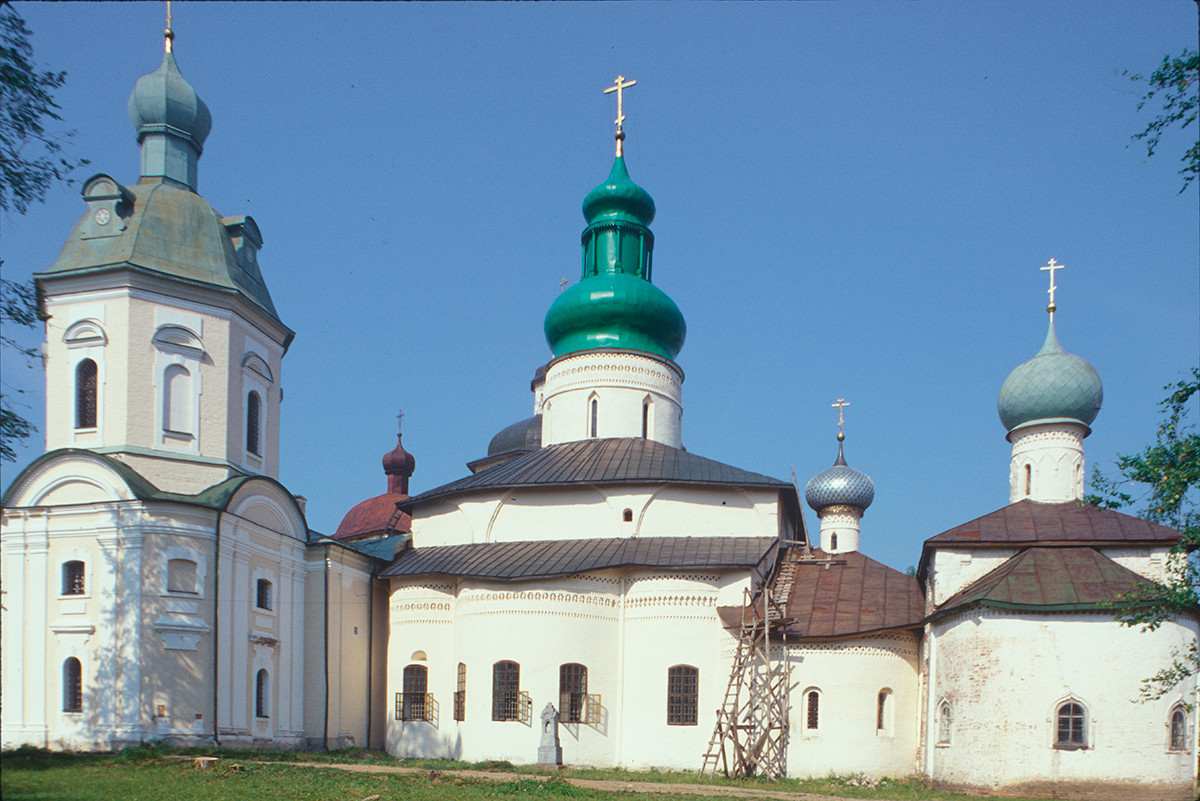 In the early 20th century the Russian photographer Sergei Prokudin-Gorsky devised a complex process for color photography. Between 1903 and 1916 he traveled through the Russian Empire and took over 2,000 photographs with the process, which involved three exposures on a glass plate. In August 1918, he left Russia with a large part of his collection of glass negatives and ultimately resettled in France. After his death in Paris in 1944, his heirs sold his collection to the Library of Congress. In the early 21st century the Library digitized the Prokudin-Gorsky Collection and made it freely available to the global public. A number of Russian websites now have versions of the collection. In 1986 the architectural historian and photographer William Brumfield organized the first exhibit of Prokudin-Gorsky photographs at the Library of Congress. Over a period of work in Russia beginning in 1970, Brumfield has photographed most of the sites visited by Prokudin-Gorsky. This series of articles will juxtapose Prokudin-Gorsky’s views of architectural monuments with photographs taken by Brumfield decades later.