Romanov shrine: The magical spire of the Saints Peter and Paul Cathedral 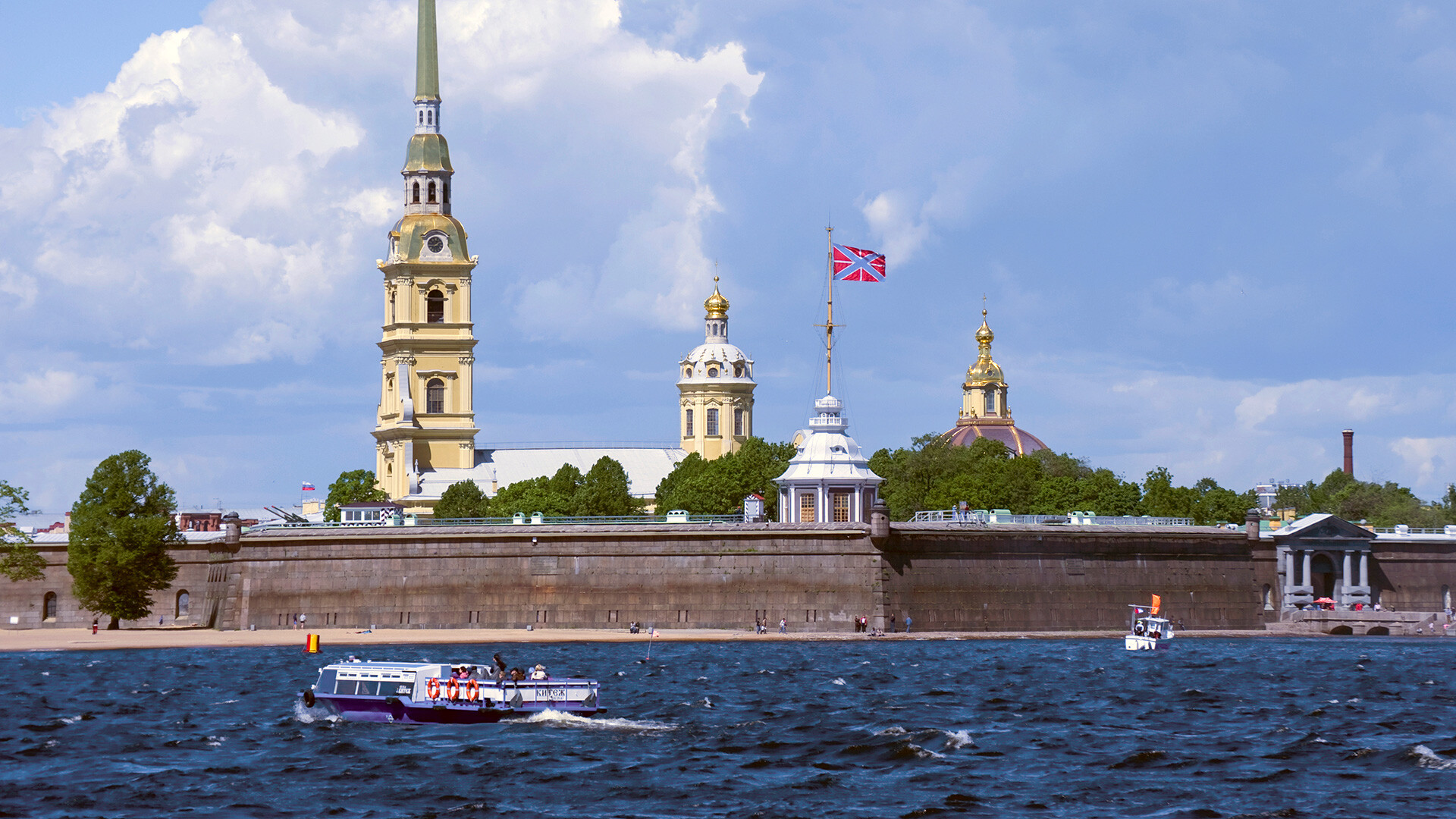 William Brumfield
Historian photographer William Brumfield takes a closer look at one of the Northern Capital’s most iconic buildings and its resemblance to a similar church in Petrozavodsk. 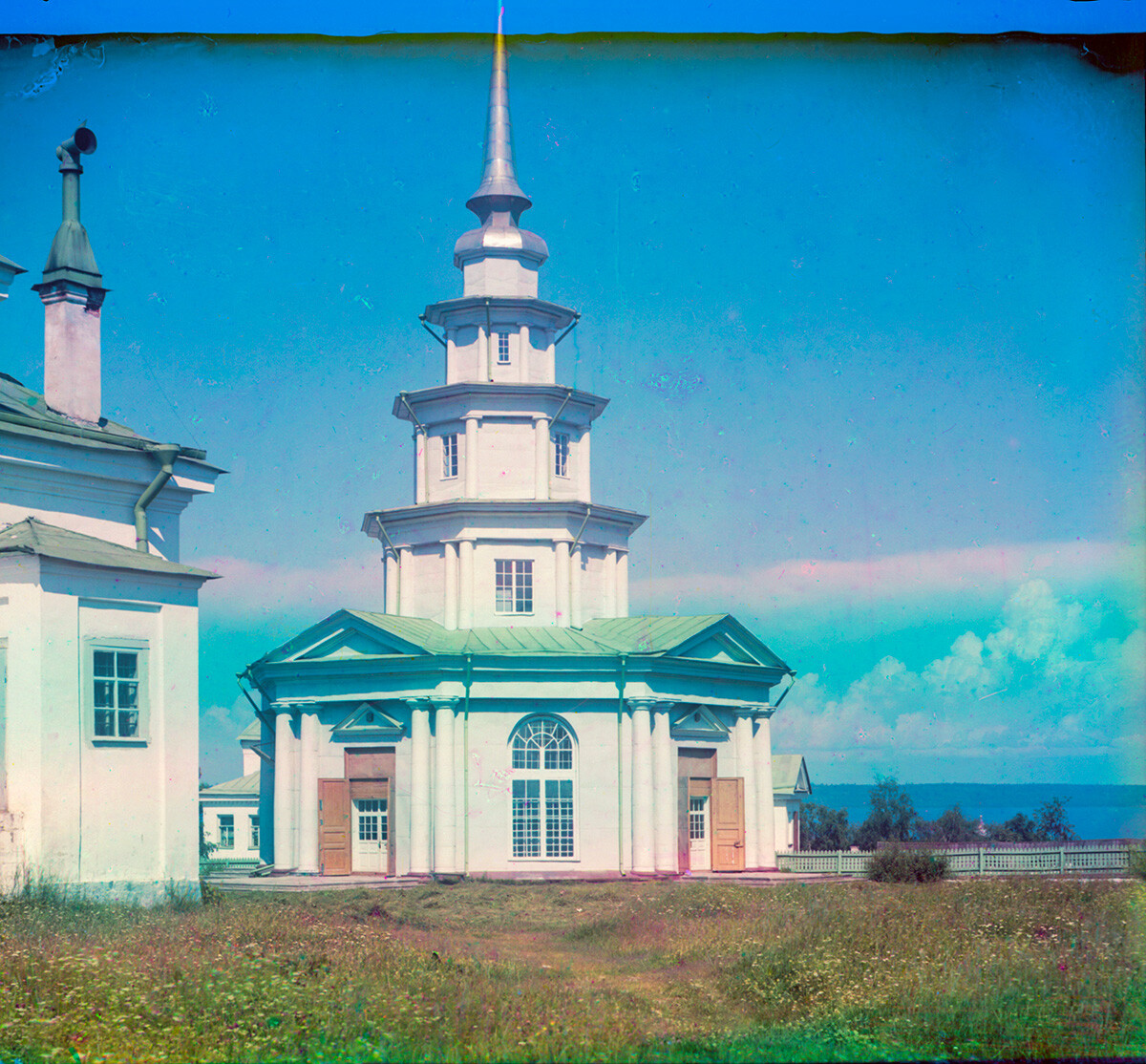 At the beginning of the 20th century, Russian chemist and photographer Sergey Prokudin-Gorsky developed a complex process for vivid color photography. His vision of photography as a form of education and enlightenment was demonstrated through his views of historic sites throughout the Russian heartland. 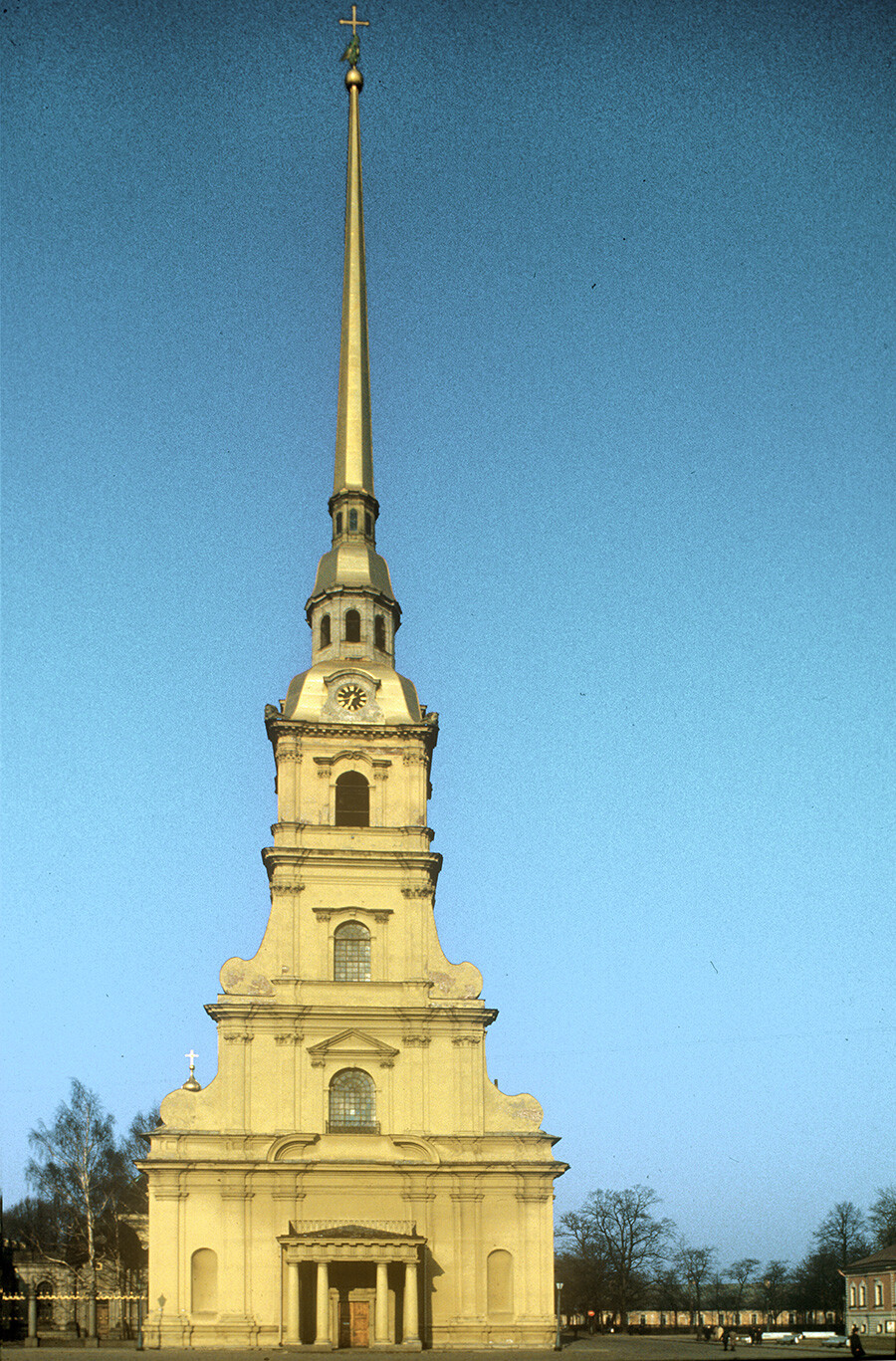 These photographs not only enable the study of architecture that Prokudin-Gorsky documented, but they also encourage comparisons with other monumental structures. For example, the tall wooden Church of Sts. Peter and Paul that he photographed in Petrozavodsk (now the capital of the Republic of Karelia within the Russian Federation) in the summer of 1916 clearly resembles one of the greatest monuments in St. Petersburg, the Cathedral of Sts. Peter and Paul at the Peter-Paul Fortress. 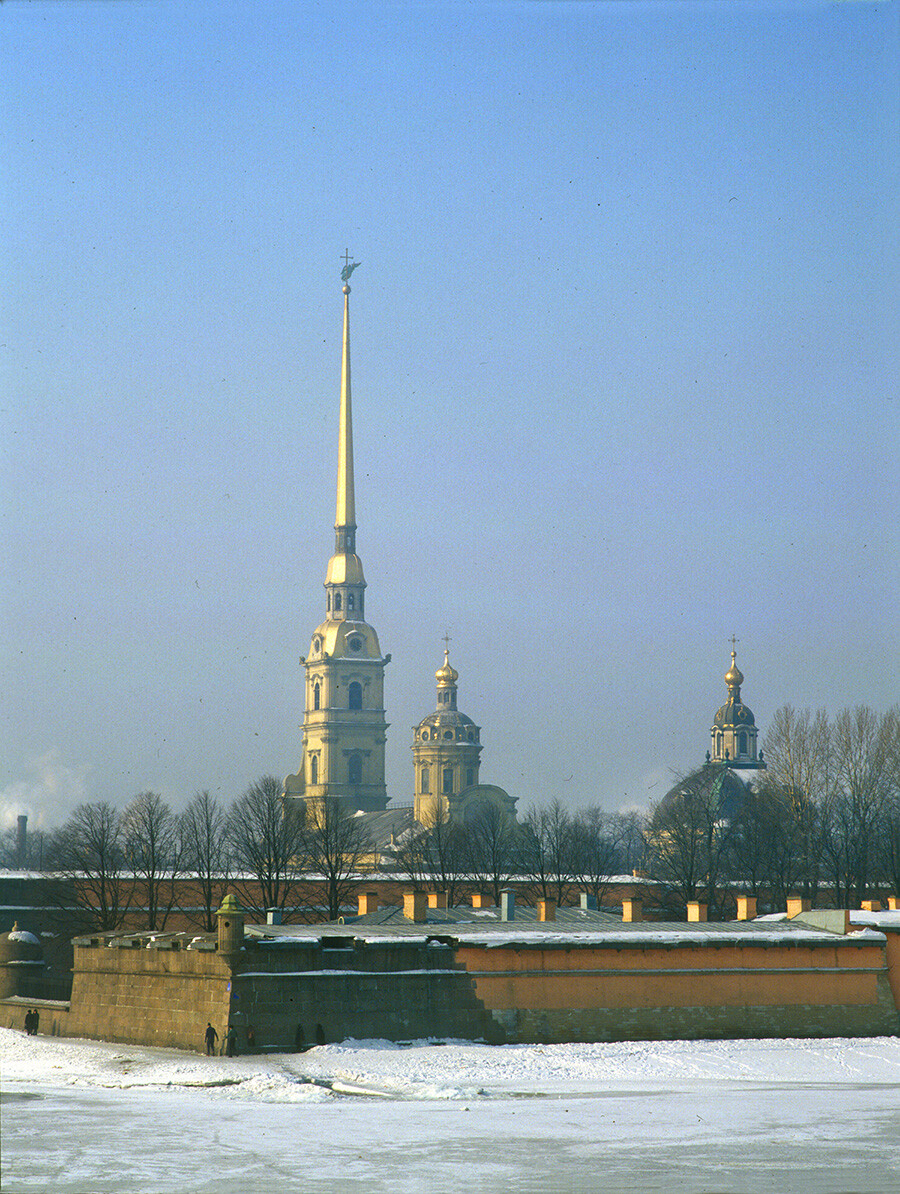 The dedication of both shrines to the heavenly patrons of Tsar Peter I (1672-1725) proved an emphatic political statement. Both were built in the early 18th century at Peter’s command, both dominated towns whose name reflected the tsar’s own and both occupied strategic positions for Peter’s prolonged struggle with Sweden known as the ‘Great Northern War’ (1700-21). 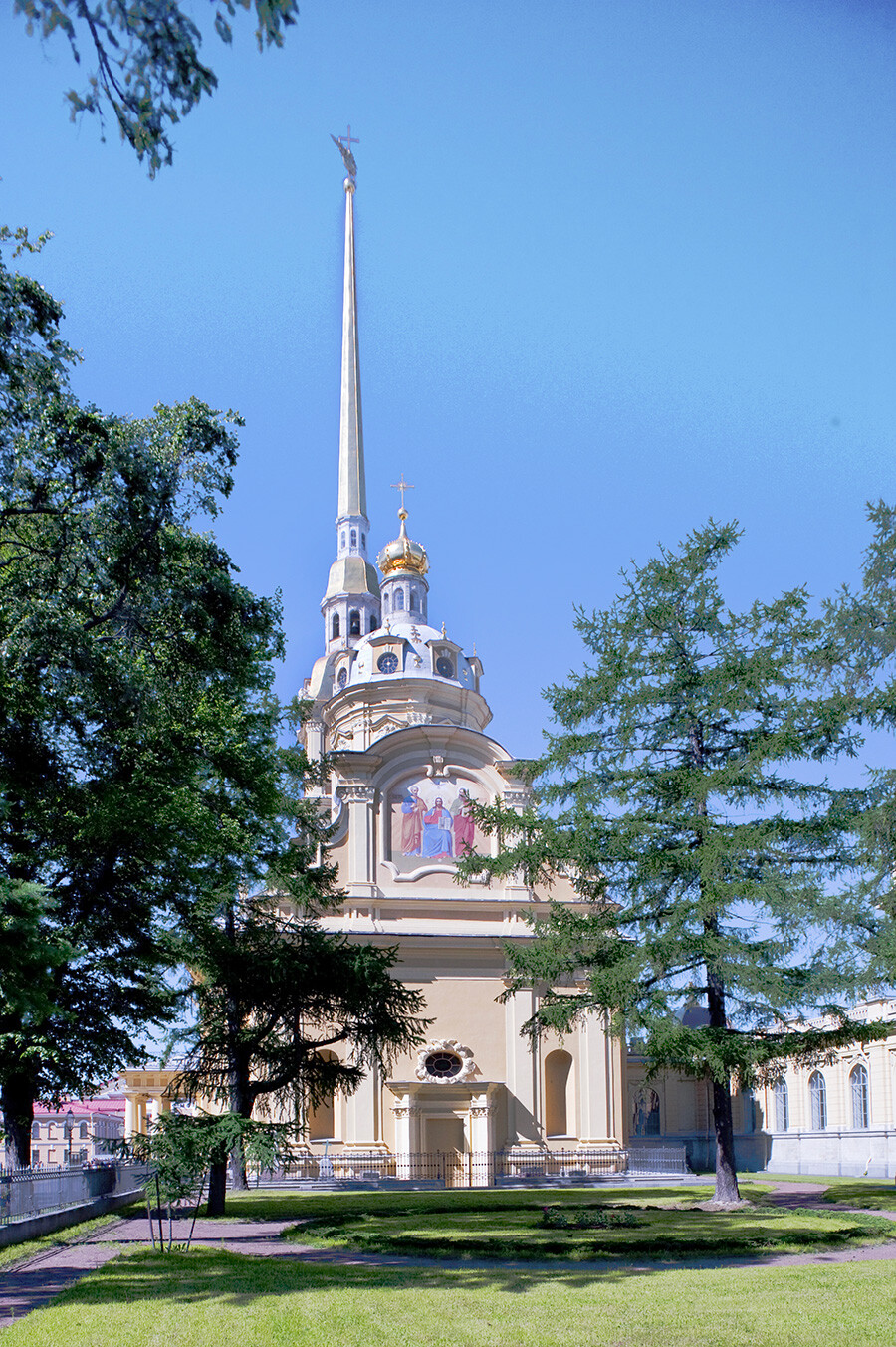 Eventually, elevated to the status of cathedral, the Petrozavodsk Church of Sts. Peter and Paul was built at the beginning of the 18th century to a design combining traditional features with elements that came directly from Tsar Peter’s architectural innovations (local lore claimed that Tsar Peter himself designed the church).

Peter supported the church as a statement of Russia’s presence in a strategic border area contested by Sweden. Petrozavodsk (‘Peter’s factory’) was founded in 1703 to produce iron for the new Russian navy during the Northern War. 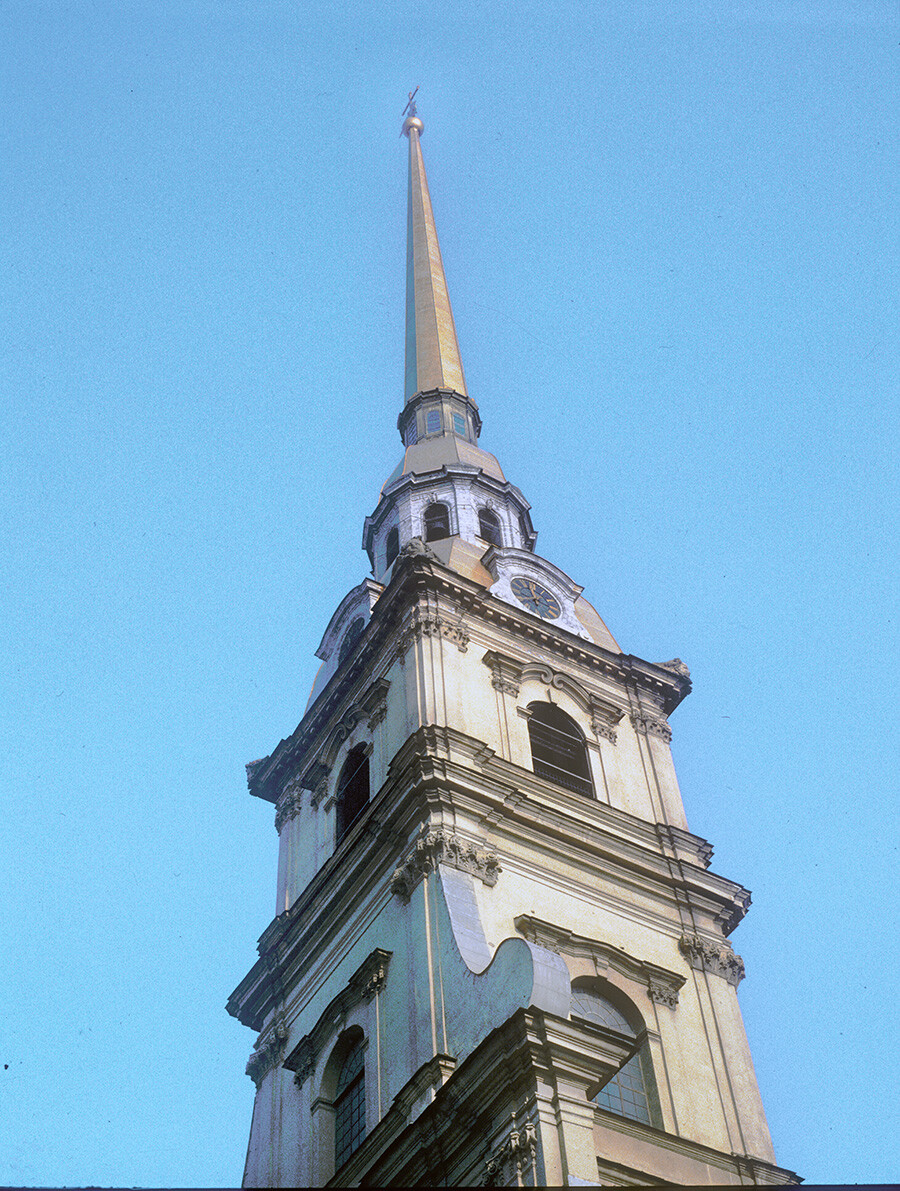 The distinct vertical design of the Peter-Paul Church is based on a traditional form in wooden architecture known as a “tiered” church, consisting of ascending octagonal levels. At the same time, the Peter-Paul Church has elements peculiar to Petrine architecture, in particular the tall spire instead of an onion dome and the presence of balconies for observation over Lake Onega. 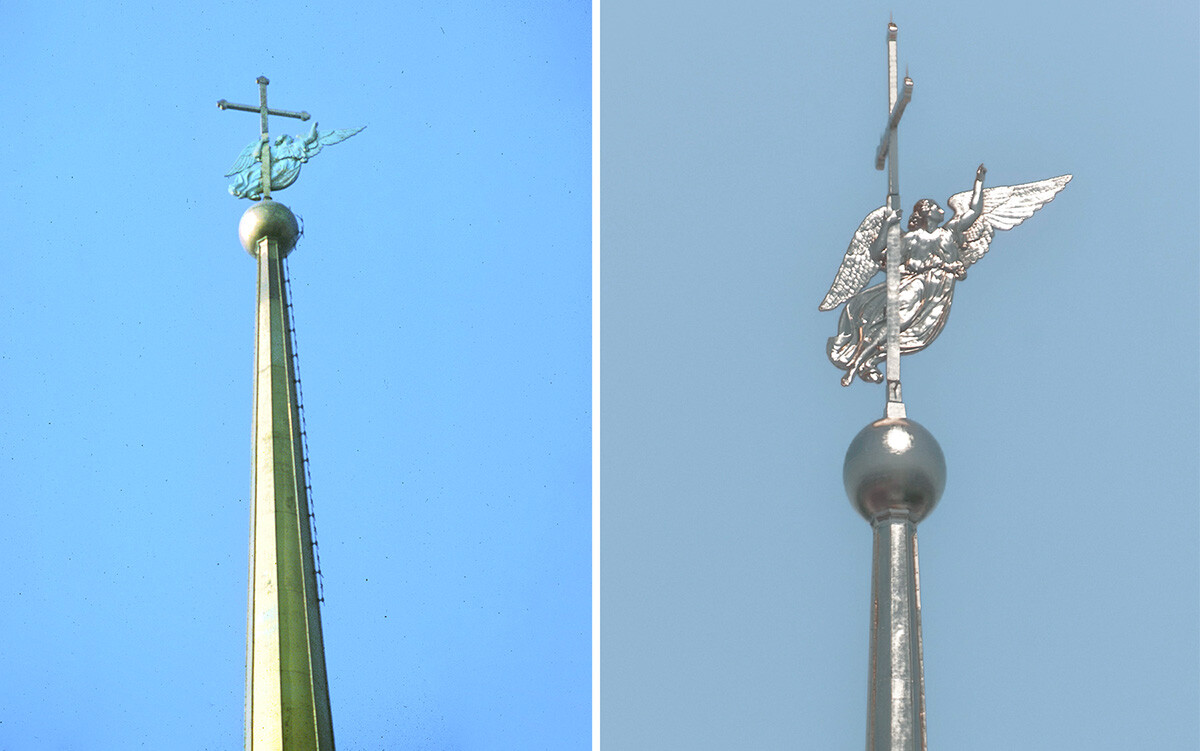 In 1784, the Peter-Paul Church was renovated with the addition of neoclassical details and plank siding painted white, as seen in Prokudin-Gorsky’s work. In October 1924, this monument was destroyed by a lightning strike and Prokudin-Gorsky’s brightly lit photograph now remains the best view of the remarkable structure. 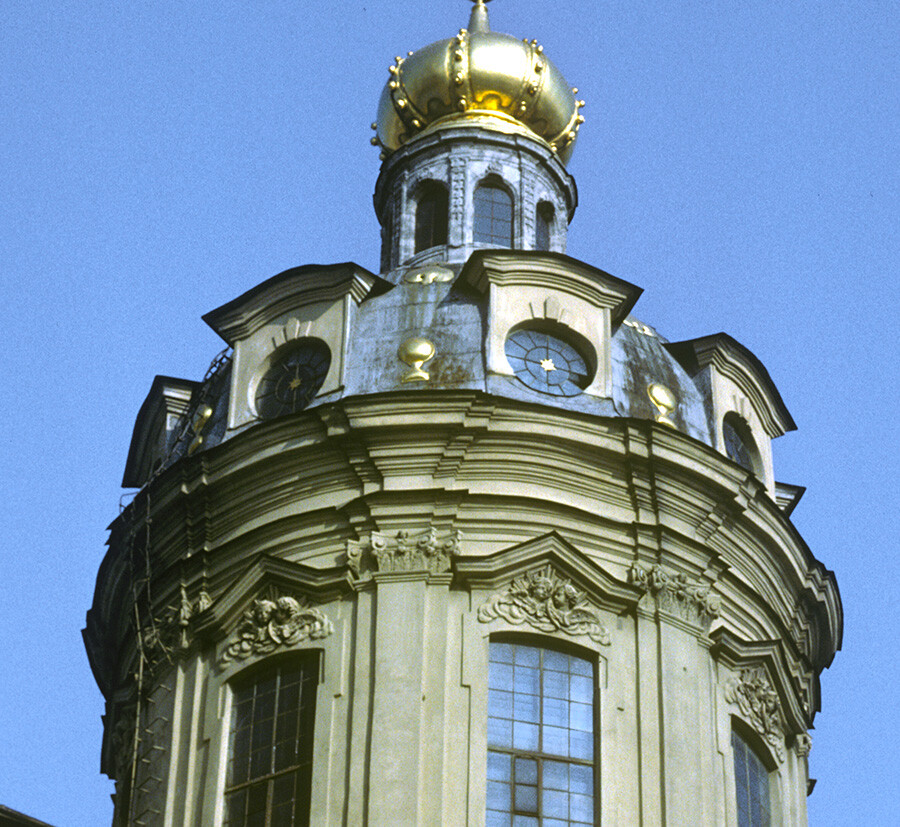 On the basis of limited visual evidence (early 18th-century engravings) it seems likely that the original Peter-Paul shrine in St. Petersburg resembled the Petrozavodsk church, an austere log structure capped with a wooden spire. But far greater things were ahead.

One of the youngest of the world’s great cities, St. Petersburg was established when young tsar Peter - later Peter the Great - was in the third year of the Great Northern War that would establish Russia’s power in northern Europe. 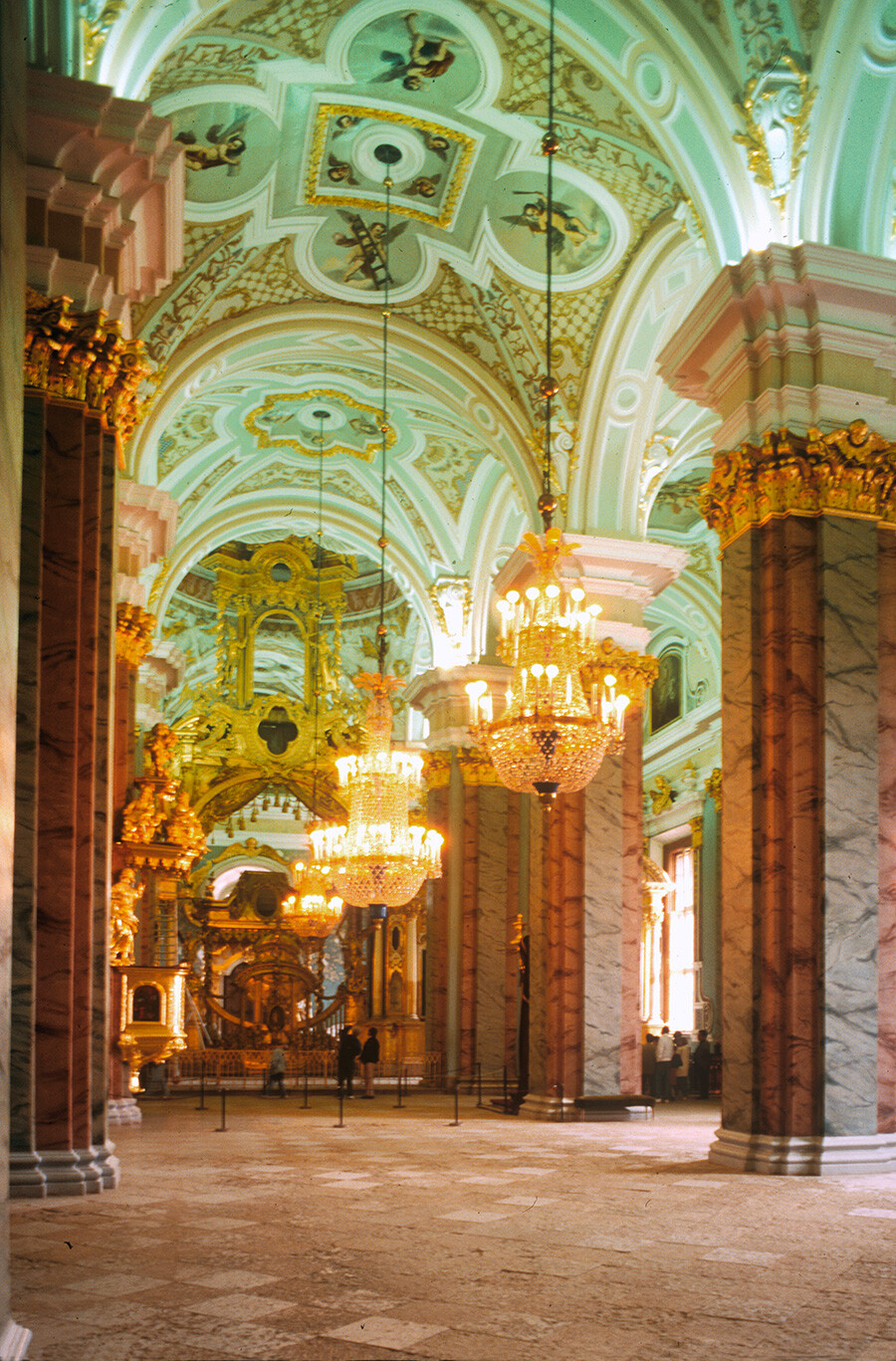 Peter’s immediate goal was to control the estuary of the Neva River and establish an opening to the Gulf of Finland. The moment came in the spring of 1703. After a series of sharply contested engagements between the Swedes and troops commanded by Prince Boris Petrovich Sheremetev, Russian forces could sail from Lake Ladoga down the short Neva River to the Gulf of Finland. 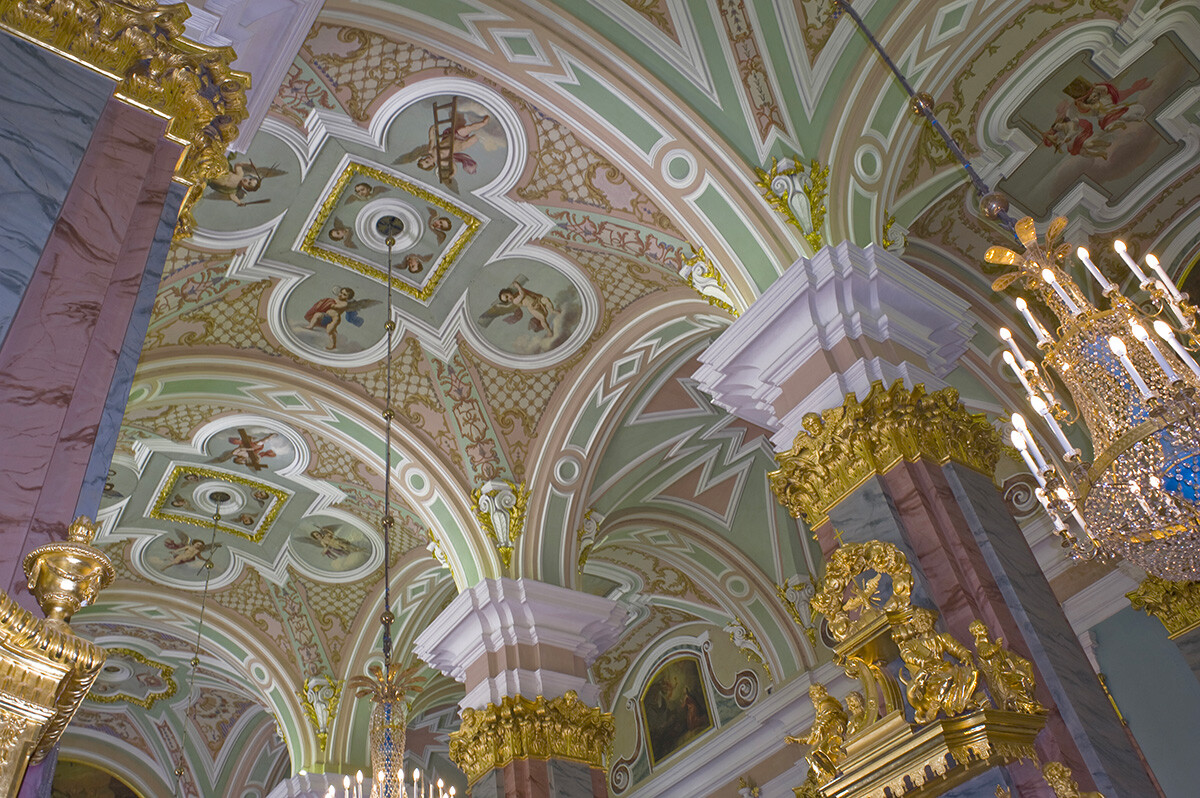 To control access to this new acquisition, Peter needed a fortress at the mouth of the Neva. A reconnaissance of the estuary revealed a small, well-protected site known as Hare’s Island. Its size and situation suggested a natural fortification and work began on May 16, 1703 (May 27 by the Western calendar). 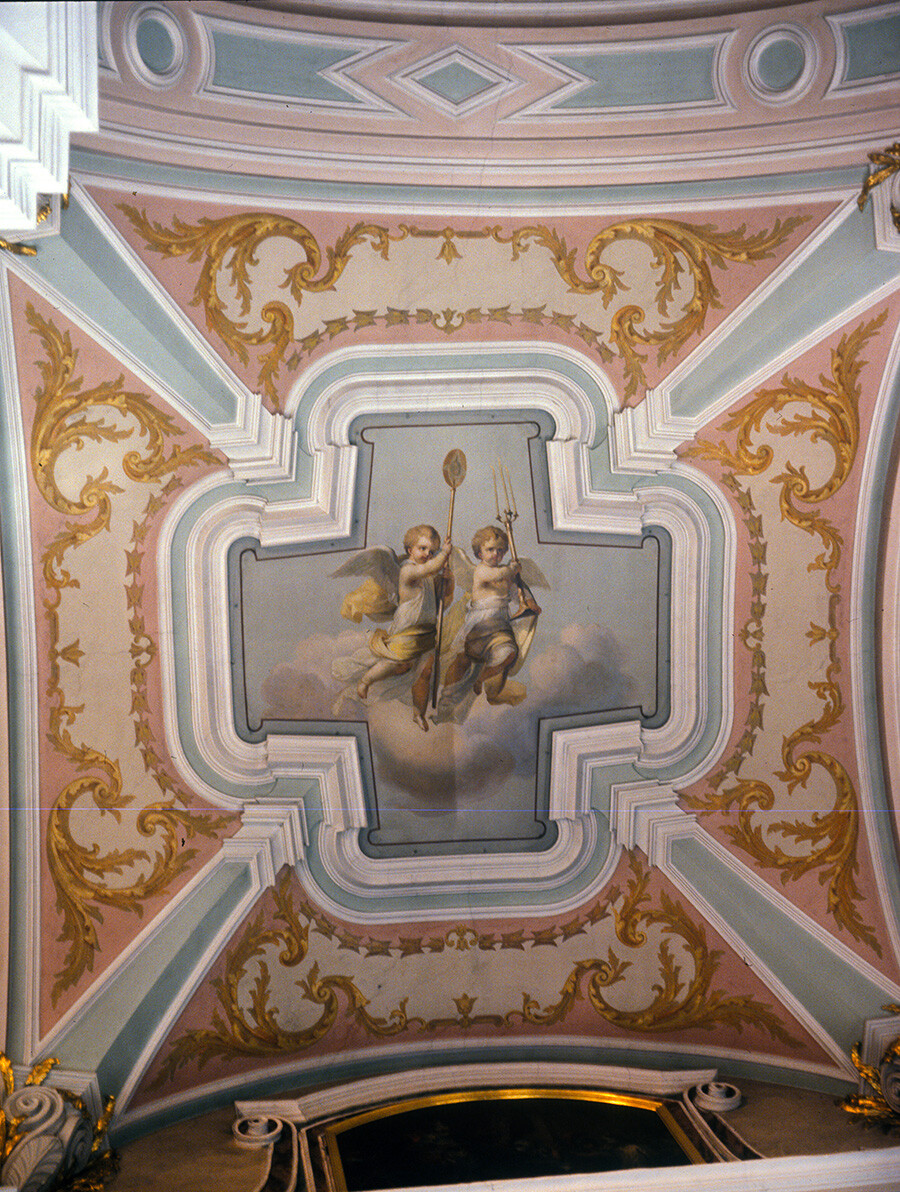 Cathedral of Sts. Peter & Paul. Cherubs on ceiling vault over side aisle. April 9, 1984

Some 20,000 conscripted laborers raised earthen walls and bastions under the most primitive conditions, but the work proceeded briskly under the supervision of Alexander Menshikov. By November, the fortress of Sankt Piter Burkh - ‘Saint Peter’s Burg’ - was completed in its basics. It was named in honor of the Russian Orthodox festival of Saints Peter and Paul (June 29) but rendered in Dutch, the language of a culture much admired by Peter.

The security of the new city was secured by Peter’s epochal victory over the Swedes at the Battle of Poltava in 1709. He now intended the fortress to serve not simply a military function, but also as a symbol of the new capital of Russia. Peter’s desire to reform Russian architecture was implemented by Domenico Trezzini (ca. 1670-1734), a Swiss Italian engineer who proved one of the most capable of the tsar’s foreign architects. 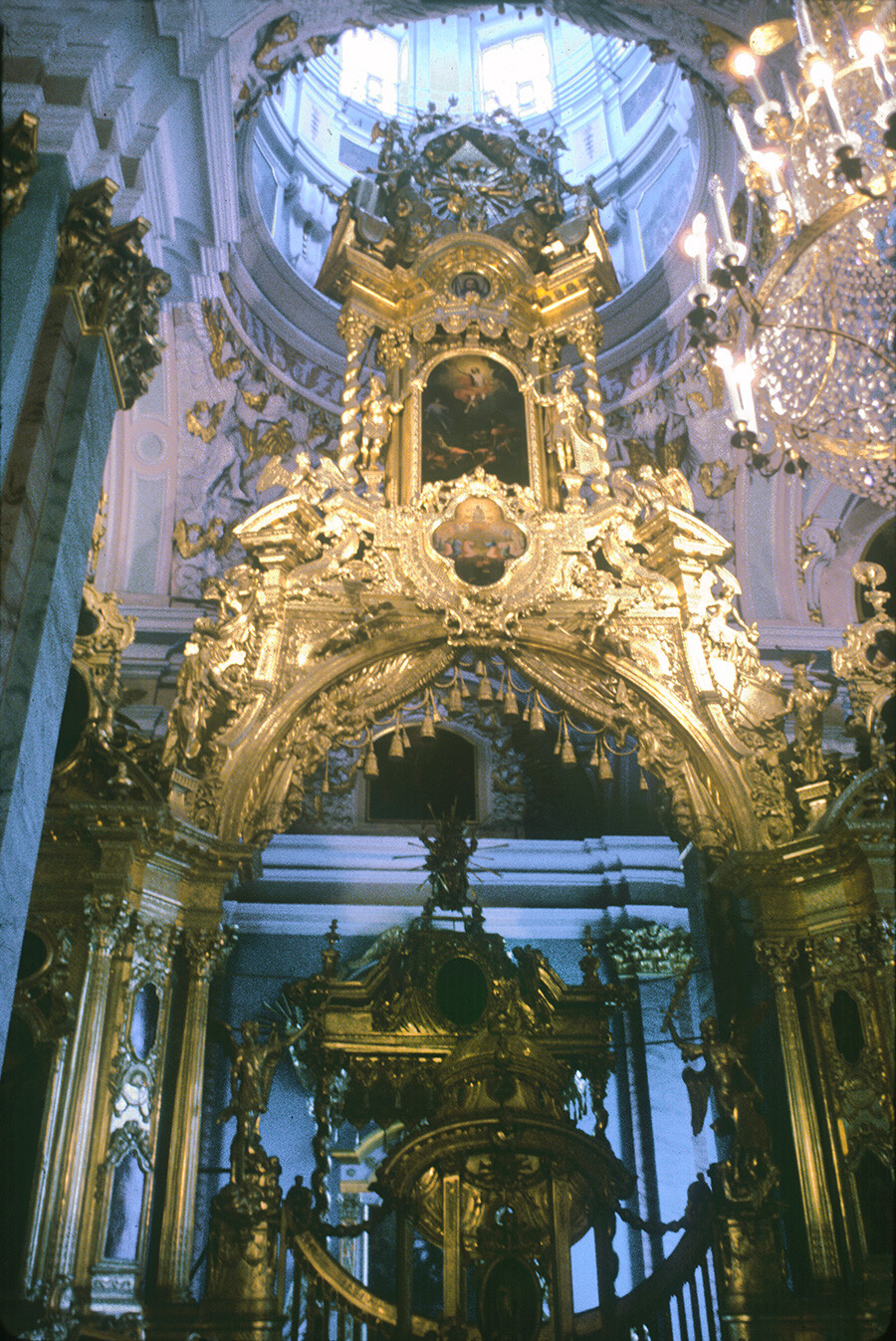 After the completion of the earthen walls, Peter intended to replace them with masonry works. The major sections of the fortress, including its six bastions, were named either for the tsar’s leading associates, such as Alexander Menshikov, or for a member of the imperial house, including Peter himself. In May 1706, the tsar assisted with the laying of the foundation stone of the Menshikov Bastion. 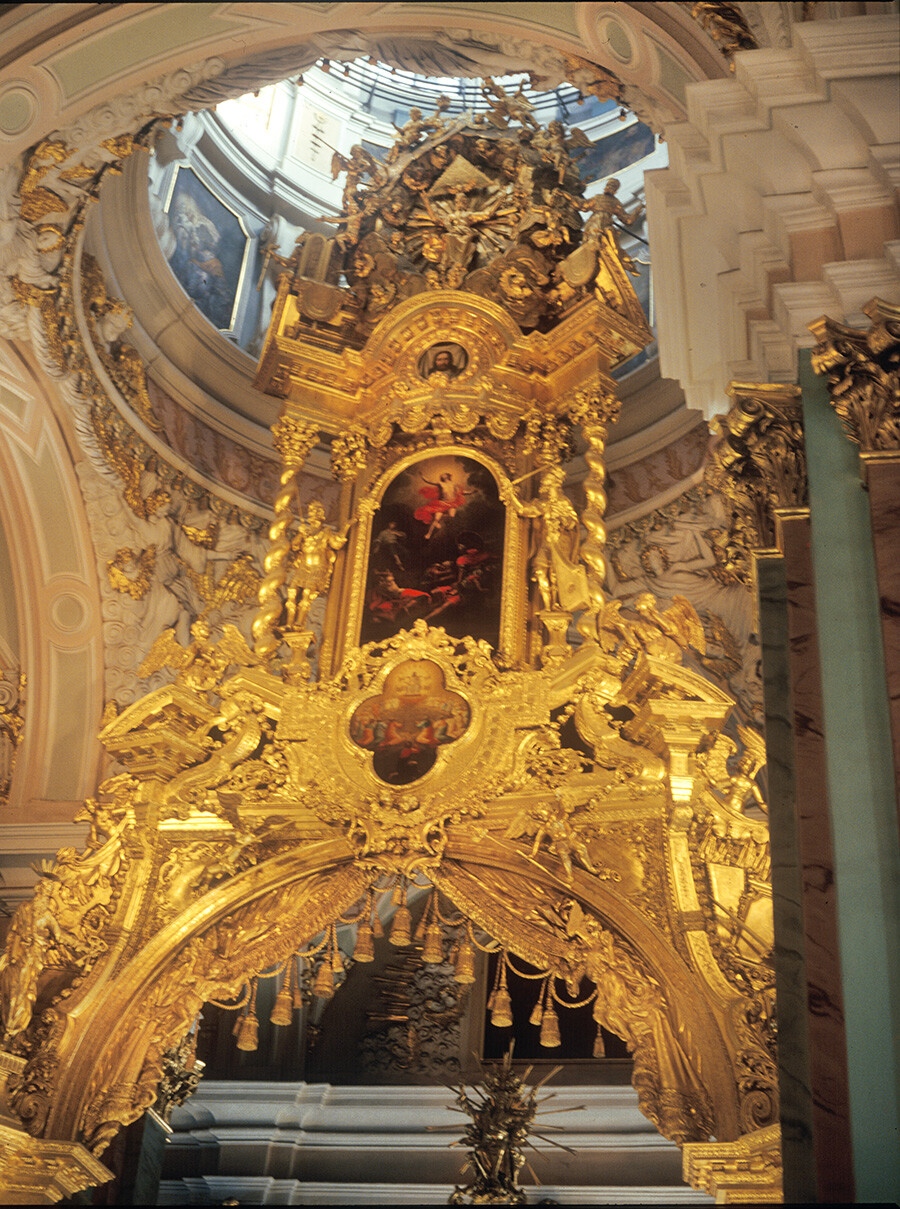 Cathedral of Sts. Peter & Paul. Upper structure of icon screen with icon of the Ascension. March 9, 1980

Within the fortress Trezzini’s design of the Cathedral of Saints Peter and Paul, begun in June 1712, represented a sharp departure from traditional Russian church architecture, which had generally followed a centralized, cross-domed plan. The architect created an elongated rectangular structure, whose modest baroque dome, on the eastern end, is subordinate to the tower and spire placed over the west entrance. 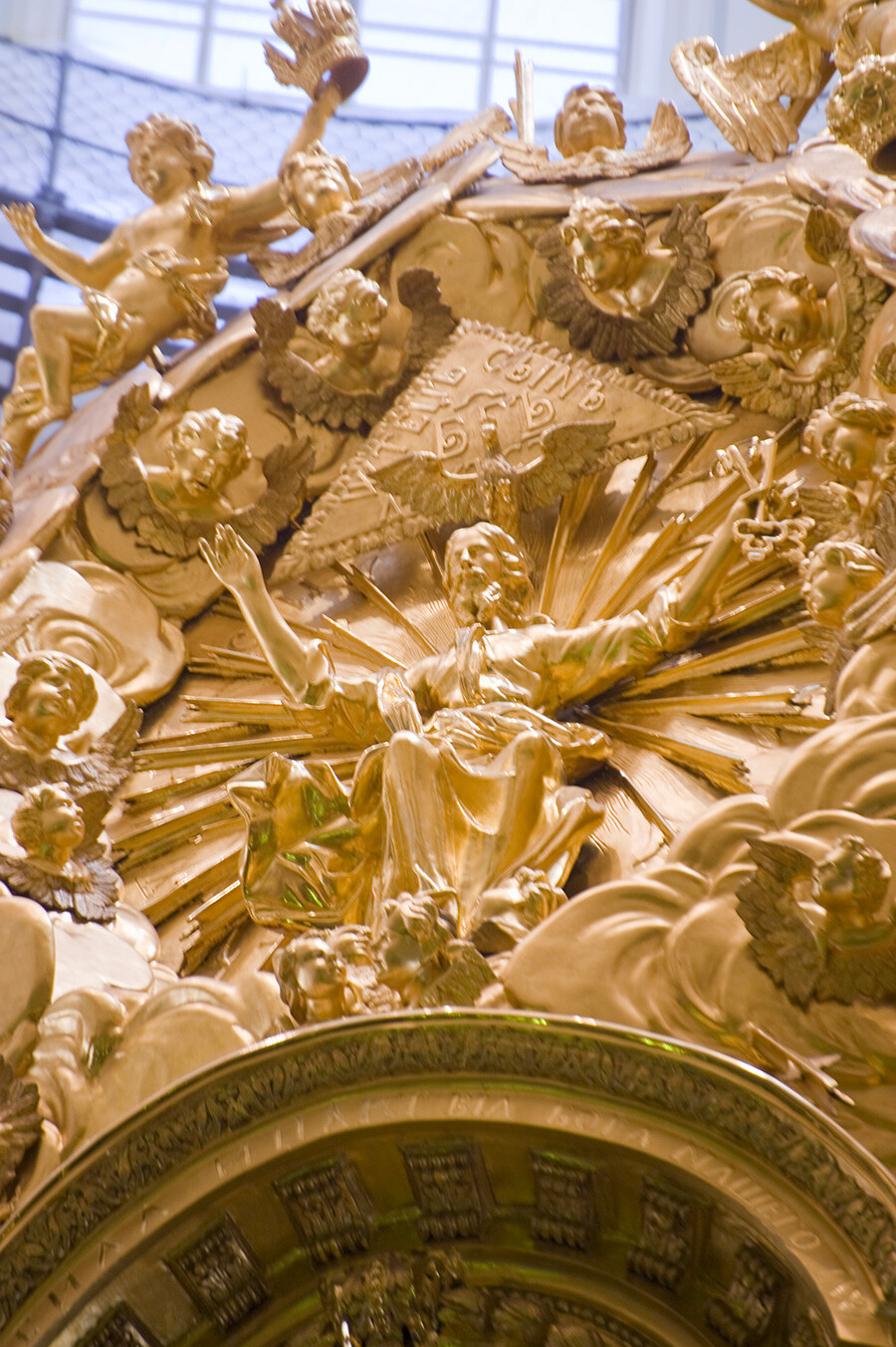 Indeed, the tower with its soaring spire was the focus of Peter’s interest and had priority over the rest of the structure, which was not completed until 1732. Rapid construction of the tower not only created a platform from which Peter could survey construction progress over the entire area, but it also provided a frame for the carillon, with chiming clock, that he had commissioned in Holland. 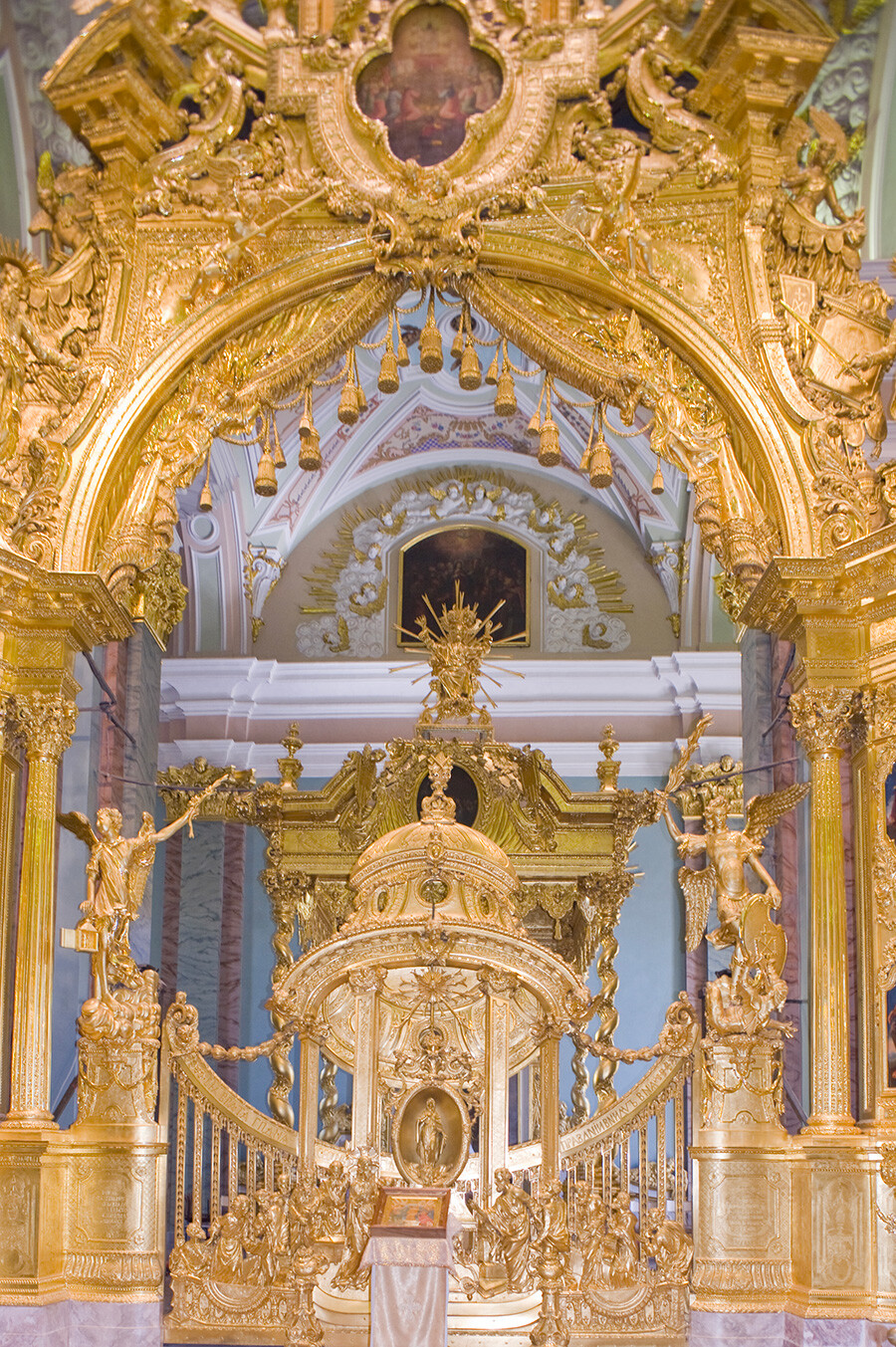 By 1717, Trezzini had completed the basic structure of the tower (the spire was assembled in 1720) and, in 1720, the carillon was installed. By 1723, the spire, gilded and surmounted with an angel holding a cross, reached a height of 112 meters, which exceeded the belltower of Ivan the Great by 32 meters. The spire resembles the 17-century Baroque architecture of northern Europe, with its large volutes bracing the lower tiers of the tower and classical elements in the ascending levels. 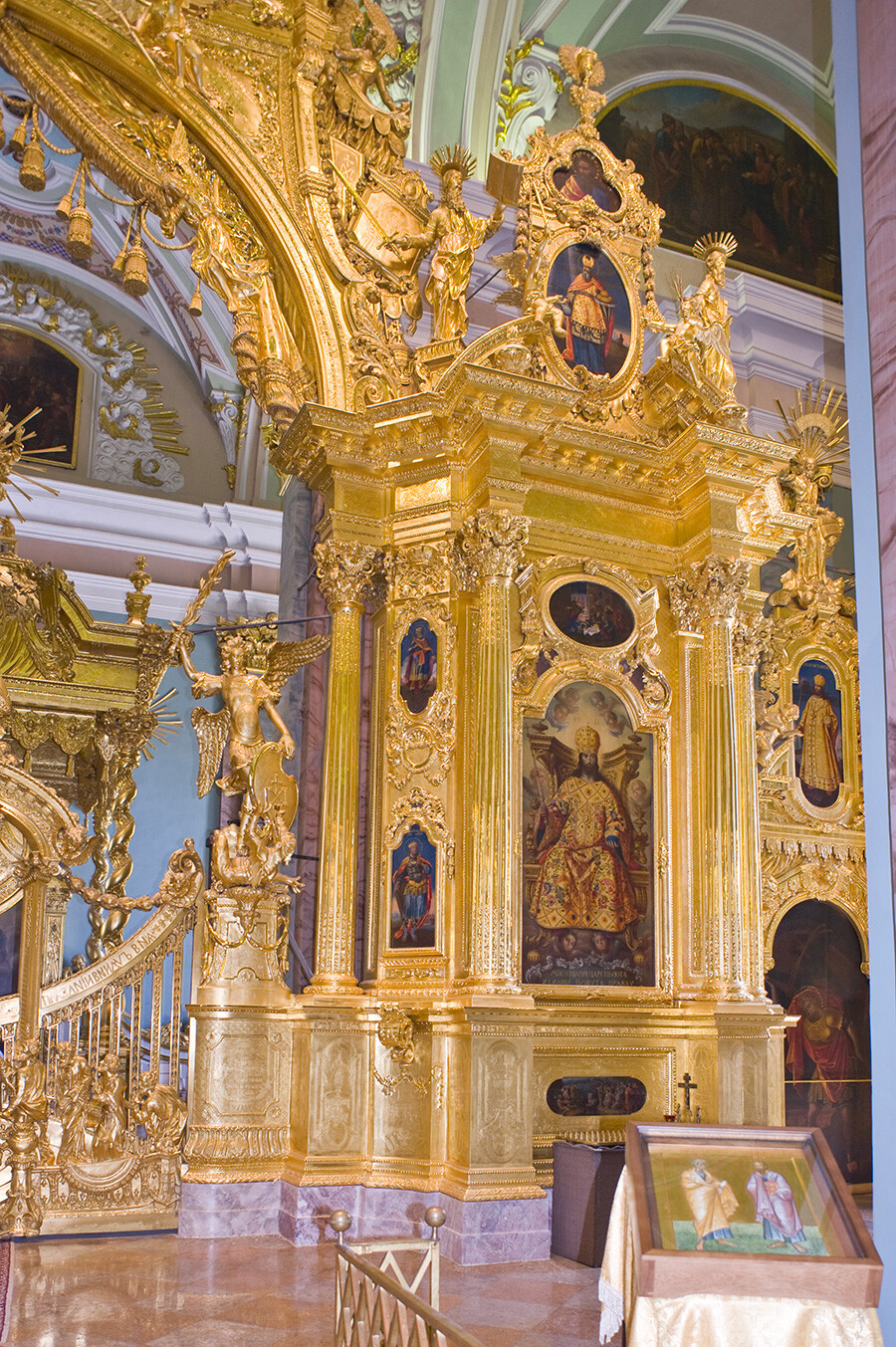 Cathedral of Sts. Peter & Paul. Gilded icon screen, right side with icon of Christ enthroned holding a scepter in the form of a cross. June 7, 2015

The large windows that mark the length of the cathedral are unprecedented in Russian church architecture and provide ample illumination for the banners and other imperial regalia that adorn the interior. It is not clear whether this great hall was originally intended to serve as a burial place for the Romanov tsars. However, with the death of Peter the Great (whose funeral was held in the wooden church maintained within the walls of the uncompleted cathedral), this august function was taken from the Archangel Cathedral in the Kremlin. 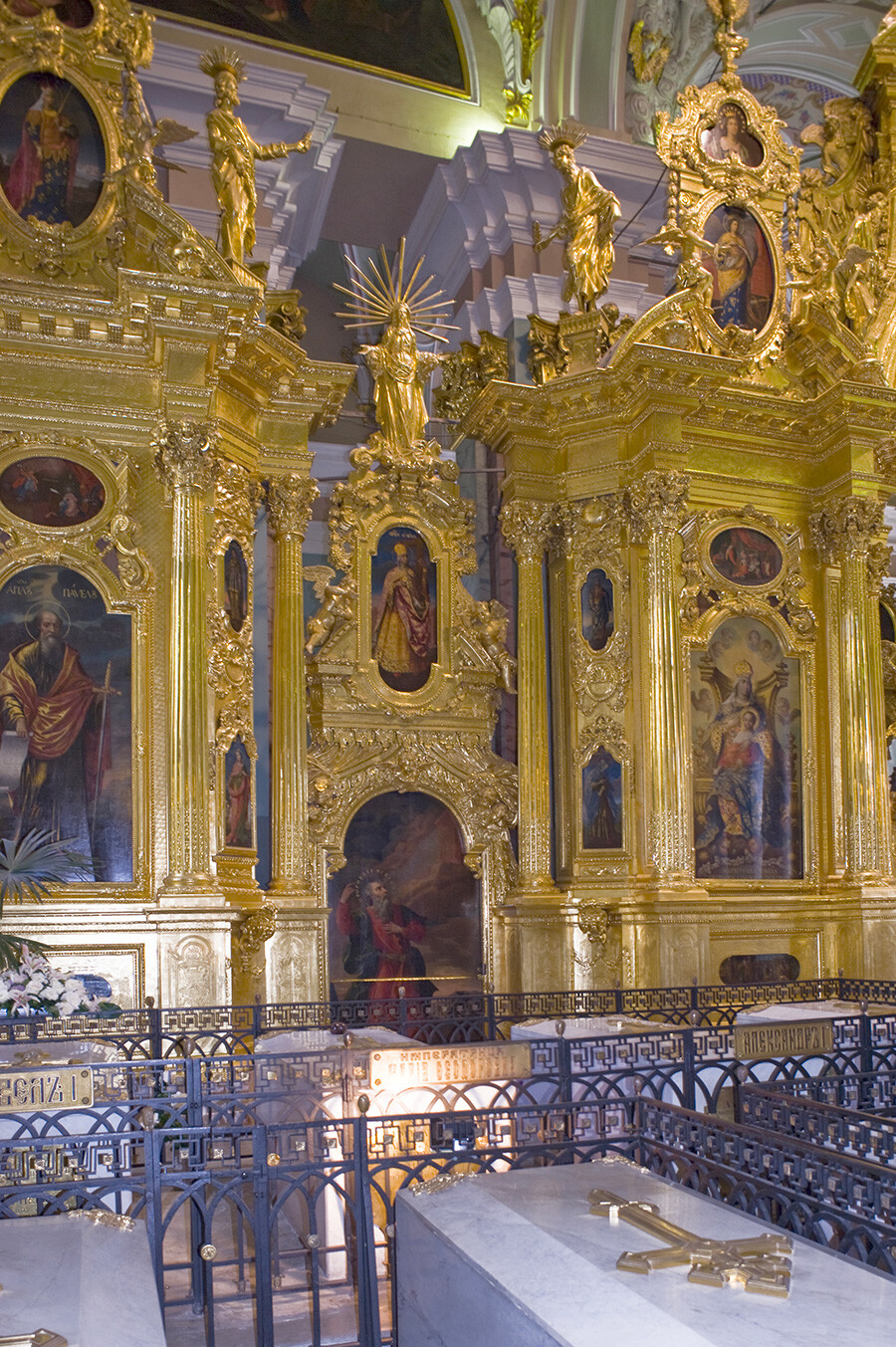 The interior of the cathedral is divided into three aisles by faux marble piers with gilded Corinthian capitals. The ceilings are decorated with colorful trompe l'oeil paintings that seem to extend the space of the vaulting. On the upper levels the walls display panels on religious themes, painted in the Western manner by a collective of Russian artists.

The centerpiece of the interior, however, is the gilded icon screen beneath the dome in the eastern end of the church. Russian craftsmen had long excelled in wood carving and these skills were readily adapted to the new Baroque style, of which this icon screen is a most accomplished example. 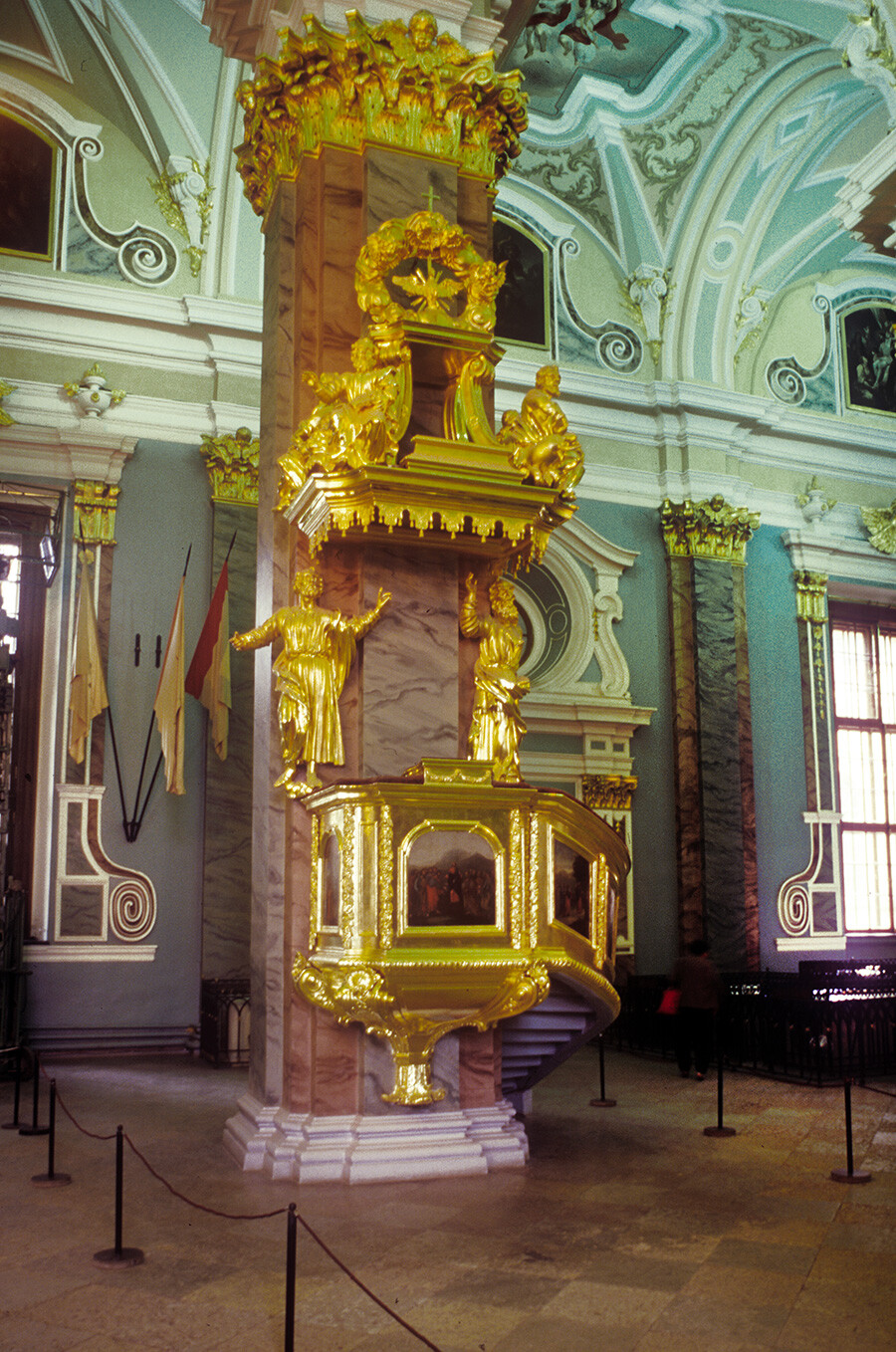 Its design, by Ivan Zarudnyi, resembles the triumphal arches erected to celebrate events of state, and particularly Peter’s victories. The frame was carved between 1722 and 1726 in Moscow and assembled at the cathedral in 1727. Its exuberant display includes allegorical figures, trumpeting angels and cherubim, twisted columns and broken pediments - all surrounding a central icon of the Ascension. 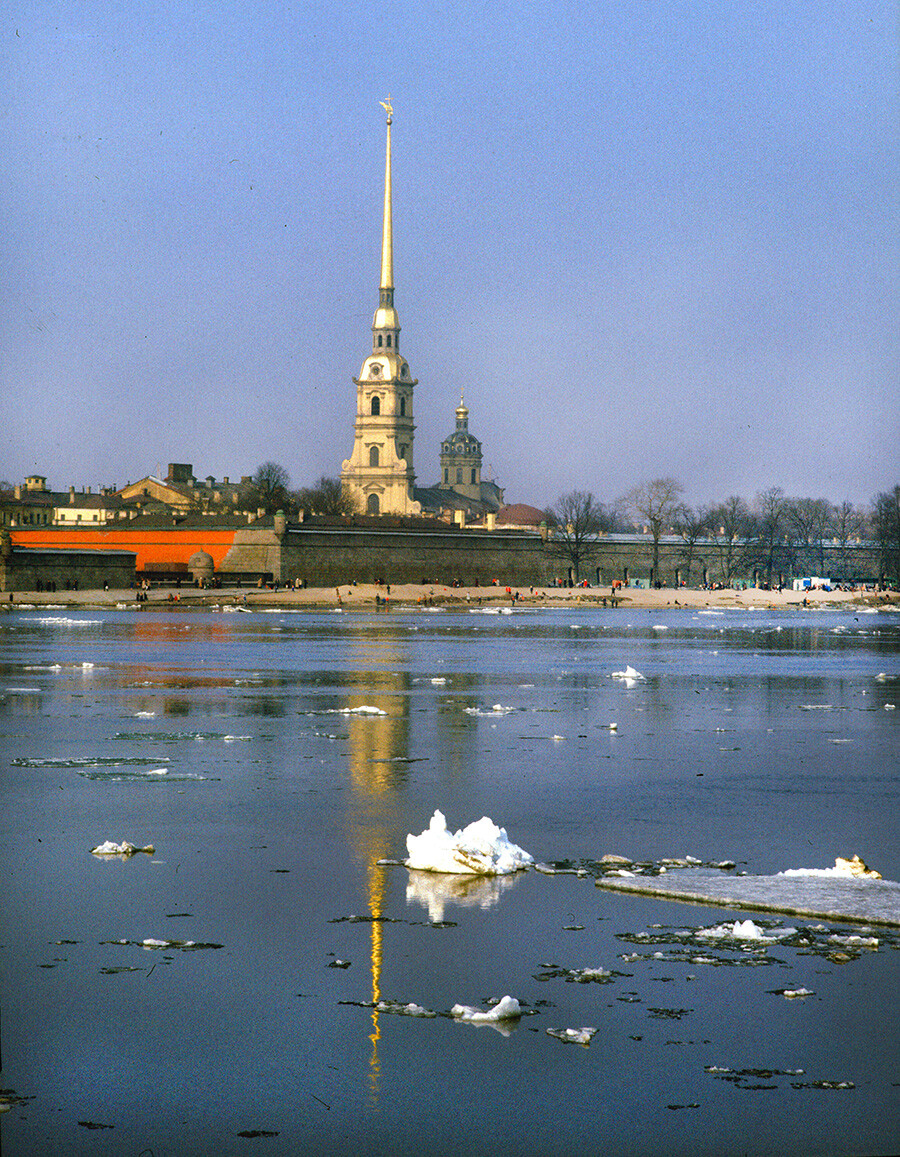 Some of the more elaborate ornamentation of the cathedral was lost after a lightning strike and fire in 1756, although a prompt response by the garrison preserved the icon screen and much of the interior work. The rebuilding of the roof, cupola and spire by Bartolomeo Rastrelli and Savva Chevakinsky, known for their lavish baroque churches, preserved the essential features of the original structure.

The 18th century witnessed the construction of many other administrative and garrison buildings within the fortress, including an enclosed pavilion for Peter’s small boat and the state Mint. But the center of the fortress - and of the city - will forever remain the Cathedral of Saints Peter and Paul, crowned by a golden spire and a guardian angel.