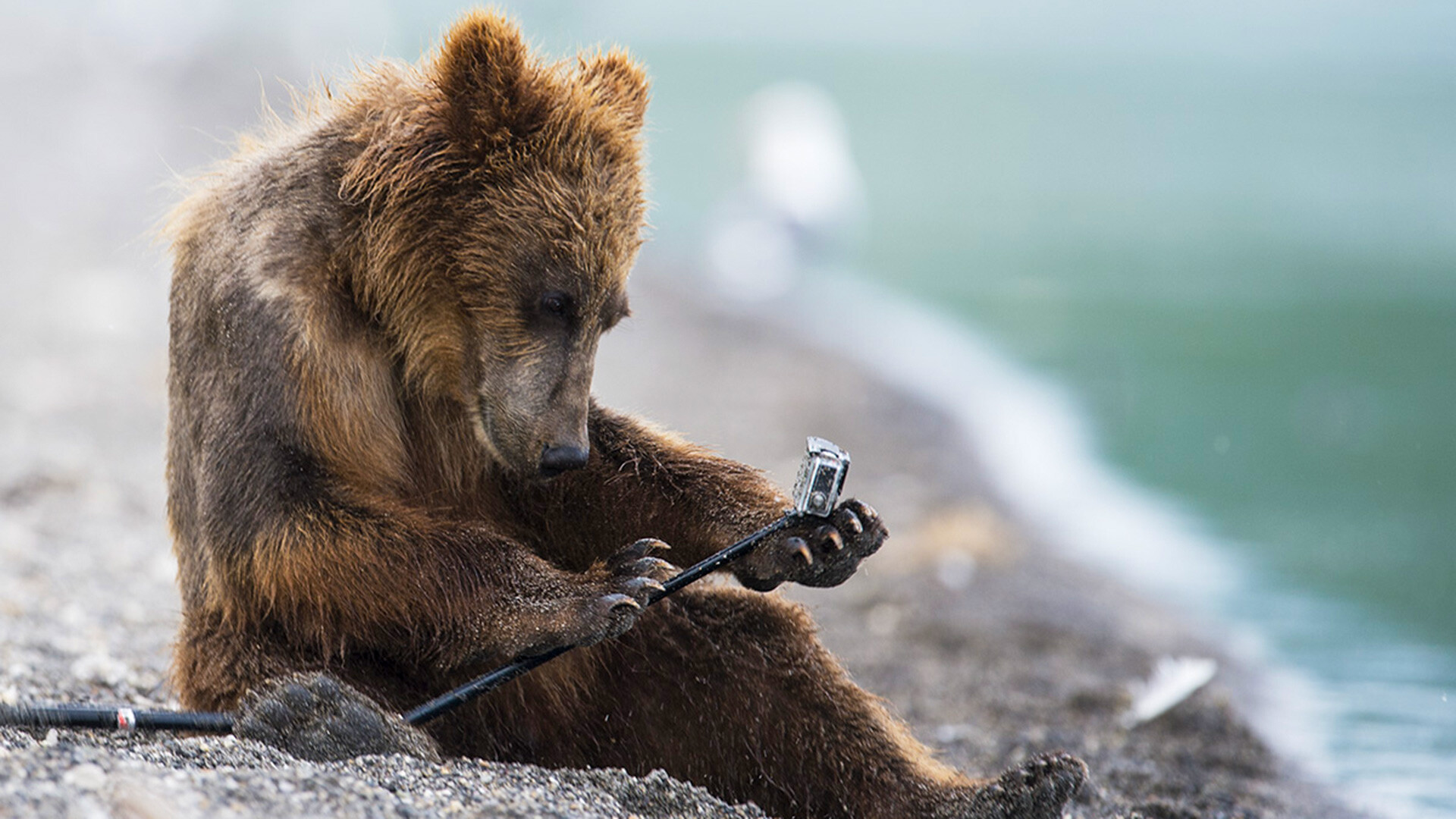 Igor Shpilenok
To save yourselves from a bear, you should hold each other’s hands and sing. And to take a great photo, you should hand your camera to a bear.

Igor Shpilenok is one of the world’s most famous wildlife photographers. He spent almost his entire life living in the woods. In the 1980s, when he hadn’t even turned 30 yet, he founded the Bryansky Les (‘Bryansk Forest’) Nature Reserve. At the same time, he became fascinated with animal photography. Recently, he shared his stories about foxes and now, he’s about to please bear fans.

The dark soul of the forest 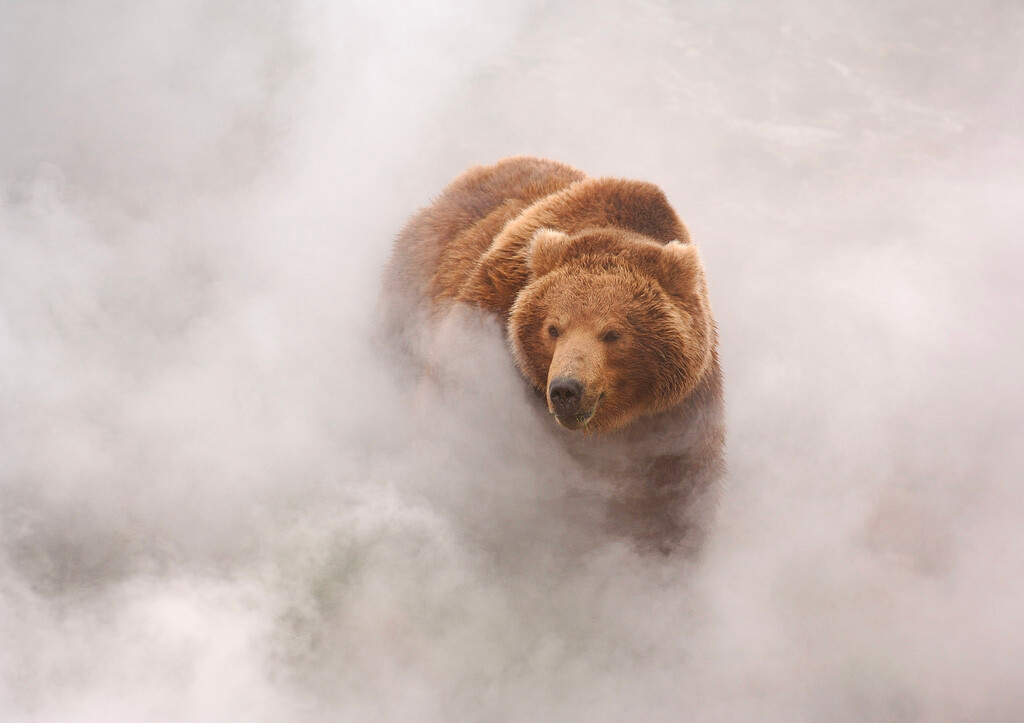 The Valley of Geysers, Kamchatka.

At first glance, it seems that bears are less emotional than other animals. They don’t stand out as much as manuls, with their annoyed expressions, or sly foxes, who are always on the lookout for something else to steal from humans. “A bear is the dark soul of the forest,” Igor Shpilenok quotes Nikolay Sladkov, a Soviet writer. “Their facial muscles are underdeveloped, so they can’t smile like dogs. When you approach a bear, you should look at its ears and its pose, not its face. They have different poses – for example, all smaller bears assume a submissive pose before a dominant bear. Dogs sometimes show similar behavior when their owners yell at them.” 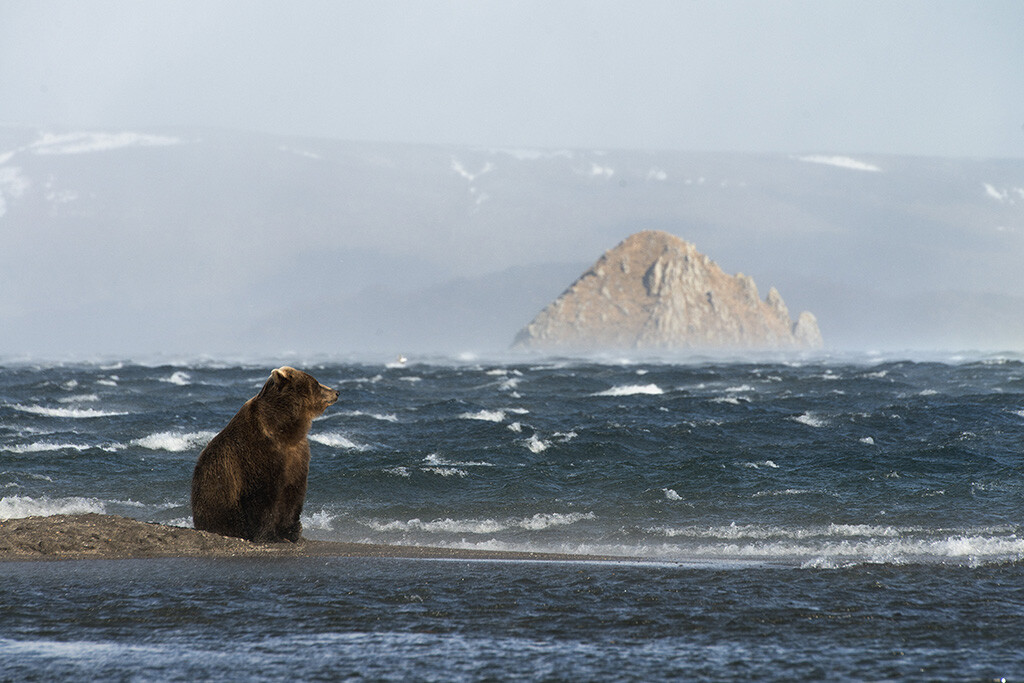 A storm on a lake in Fall.

According to the photographer, bears generally have a strict hierarchy, where a lot is determined by size. “A human is not always able to impress a bear with their size. But they can trick them.” 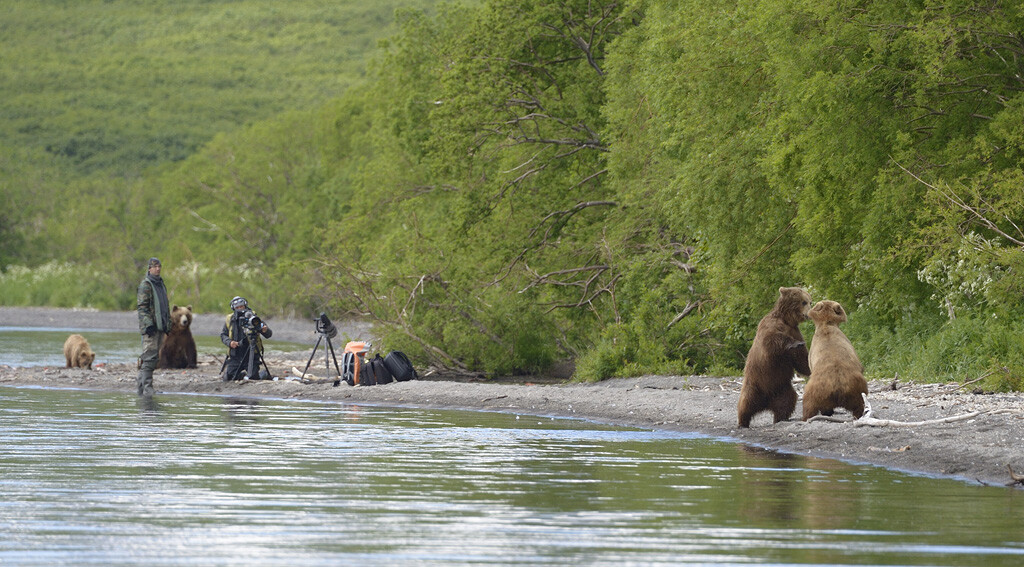 Actors in the foreground, the film crew in the middle and the audience in the background.

“When I work with bears, I put on a life vest underneath a large jacket. Sometimes, I stuff a rolled-up sleeping mat into an empty backpack. All the bears in the area scatter, thinking  it’s some sort of a muscular hump. They don’t even think of checking if it’s real or not.” 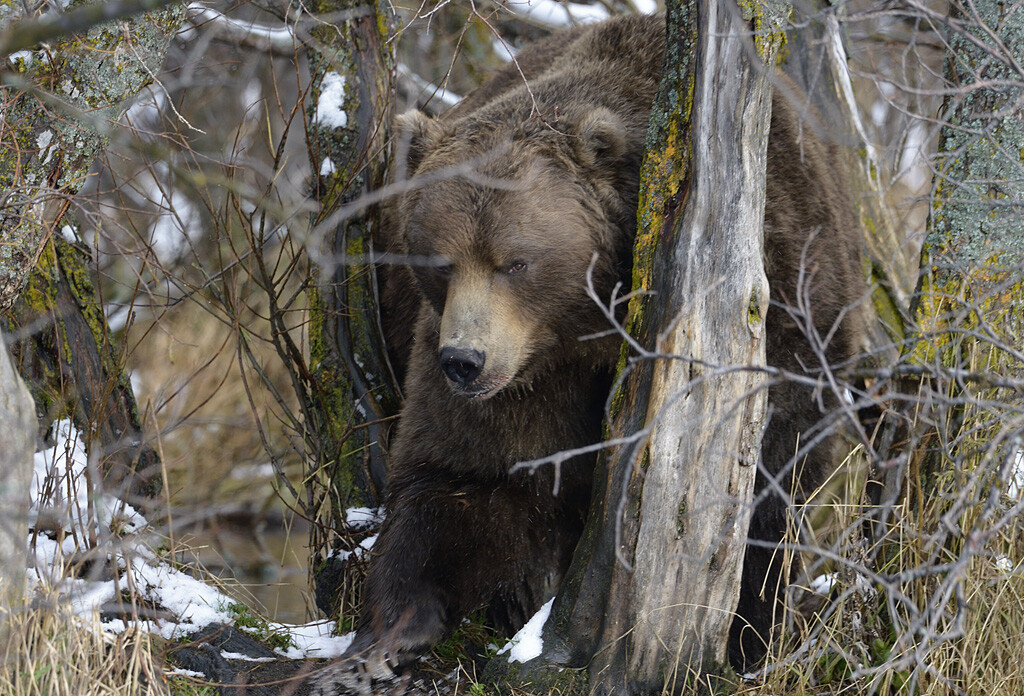 A glance from a thicket.

“Self-confidence goes a long way, too. A bear approaches you and watches if you’ll back down. In reality, a smaller animal retreats before a larger one, but you can surprise a bear with your arrogance, especially if you do something unexpected. For example, if you throw open your jacket – which means, from the bear’s perspective, you dramatically increase in size. This always surprises them – sometimes, they even get ‘bear’s disease’ [diarrhea],” Igor says.

Why does a bear need a camera? 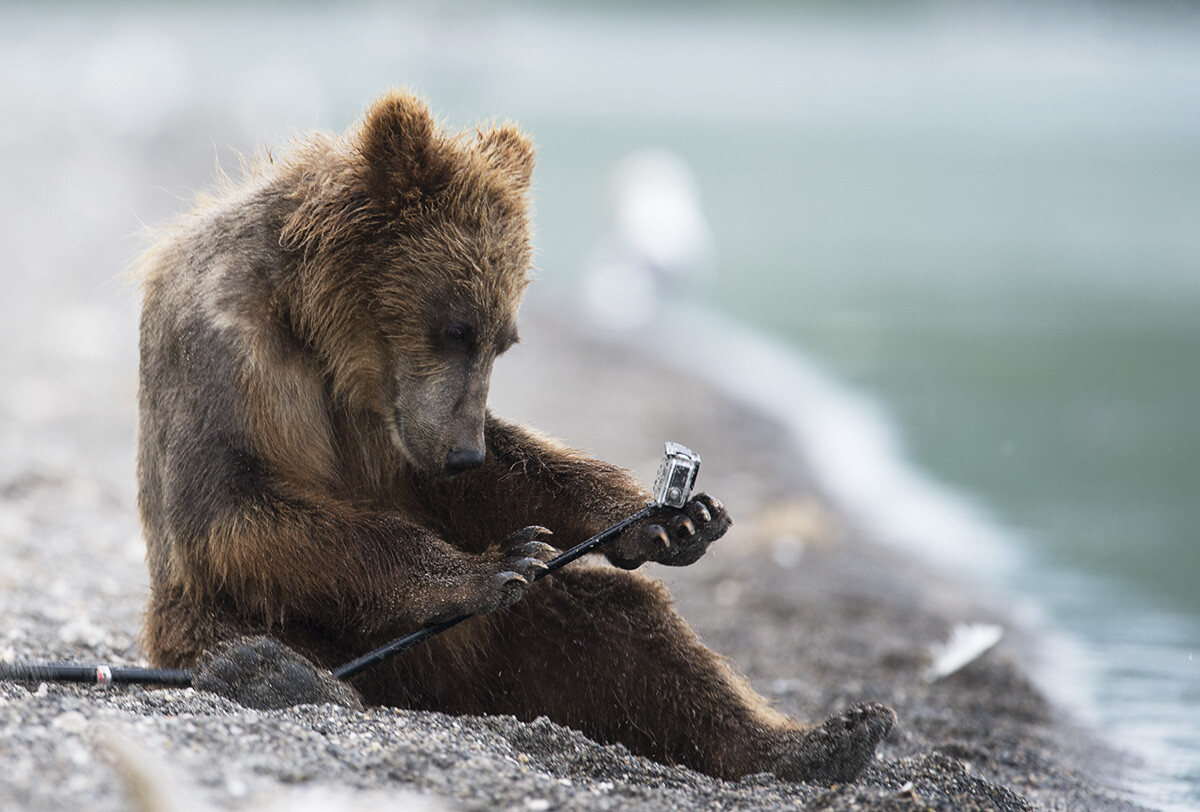 Once, a bear stole a camera from humans and dragged it into a lake, which upset them quite a bit. But, afterwards, they had an idea: to let the bears take photos for themselves, since they like cameras so much. “We contacted GoPro and they sent us 10 action cameras with selfie sticks,” the photographer recalls. “The bears took the cameras and carried them around, taking photos of themselves and everyone else.” Not all the cameras were retrieved afterwards. 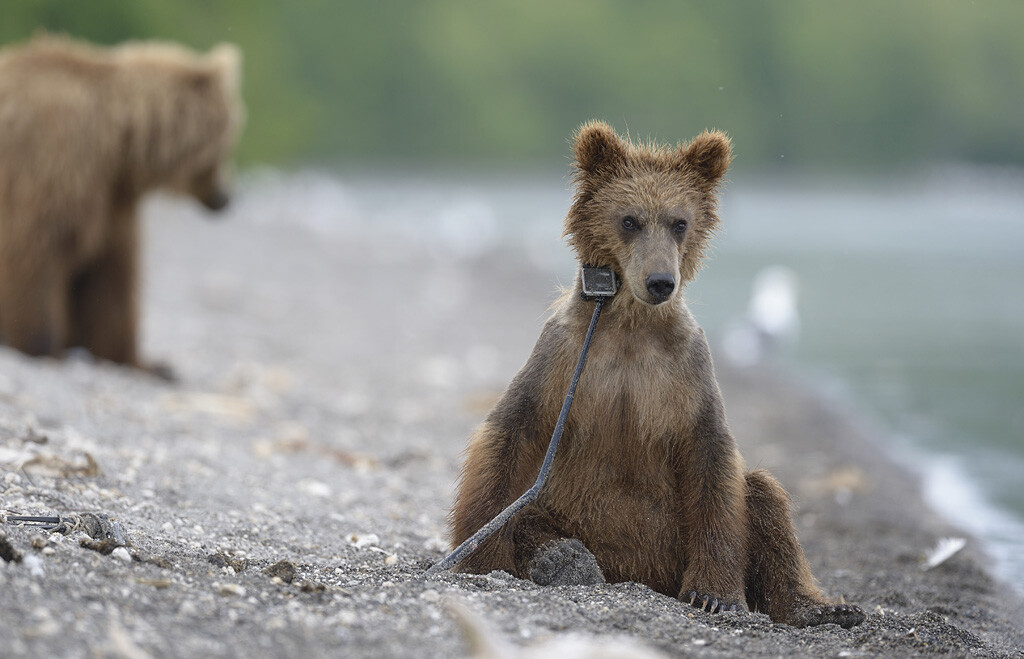 “It turned out that they sure can take photos, but they don’t know how to straighten the horizon. Everything is either upside down or sideways. But they are, indeed, brilliant cameramen – they shot some footage humans could never do.” 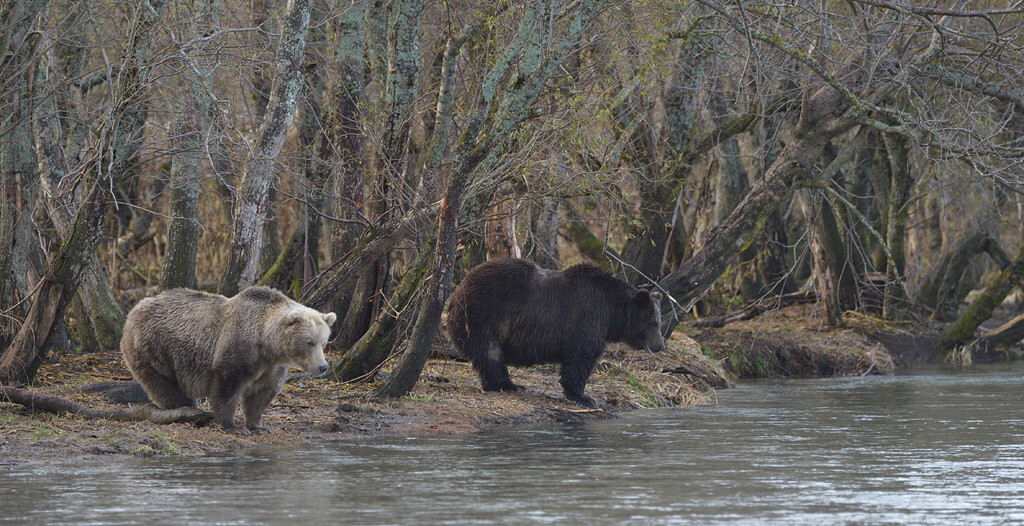 Brown bears are only called brown, but their fur can vary from bright straw to dark brown. Sometimes, you may think that a bear is blond, but its fur has just faded in the sun. 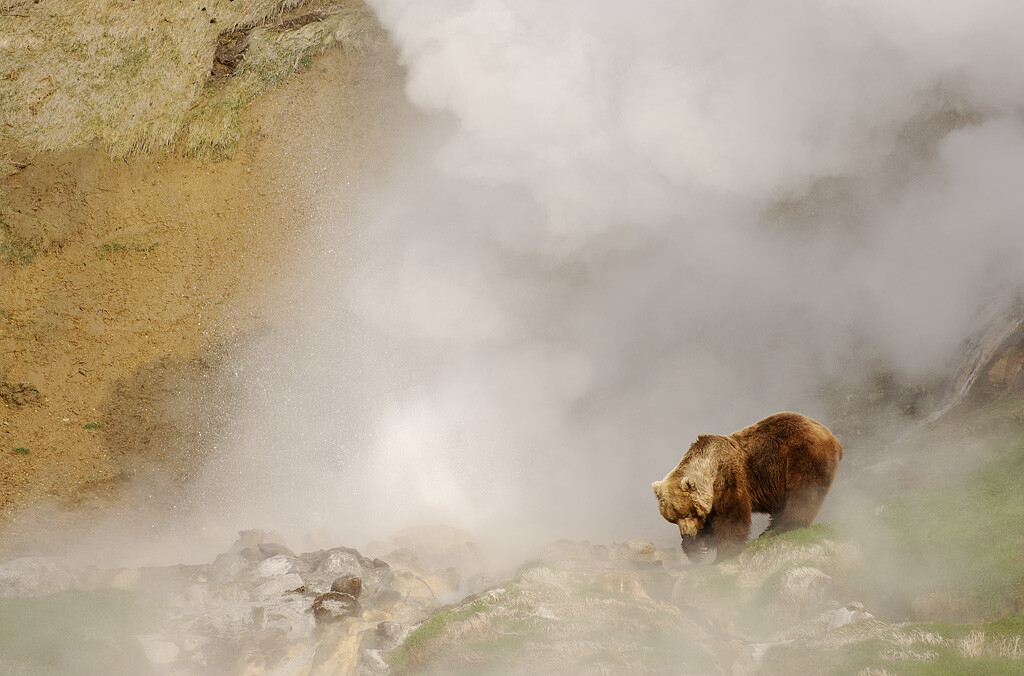 A bear and a geyser, Kamchatka.

“When bears come out into the sun in April in Kamchatka, snow is still everywhere; they walk on this snow and their eyes are watery from the sun’s reflection, making them squint all the time. A human will put on sunglasses, but bears don’t have such an option. Their sight gets worse, their fur fades. Then they shed and become dark again. You try walking around in the sun like that! I myself had five shirts that faded this summer alone.” 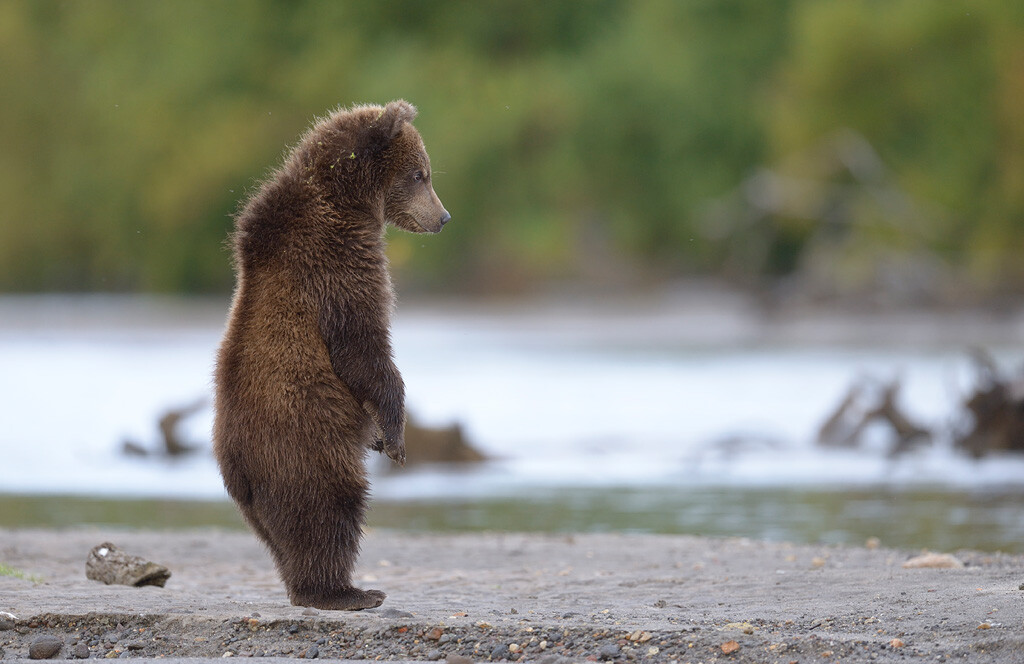 A bear cub at Kurile Lake.

Why does Kamchatka attract so many bear photographers? Because there are large nature reserves where no one chases the bears - neither hunters nor poachers. Also, they have a year-round access to food – sometimes the bears don’t even hibernate. 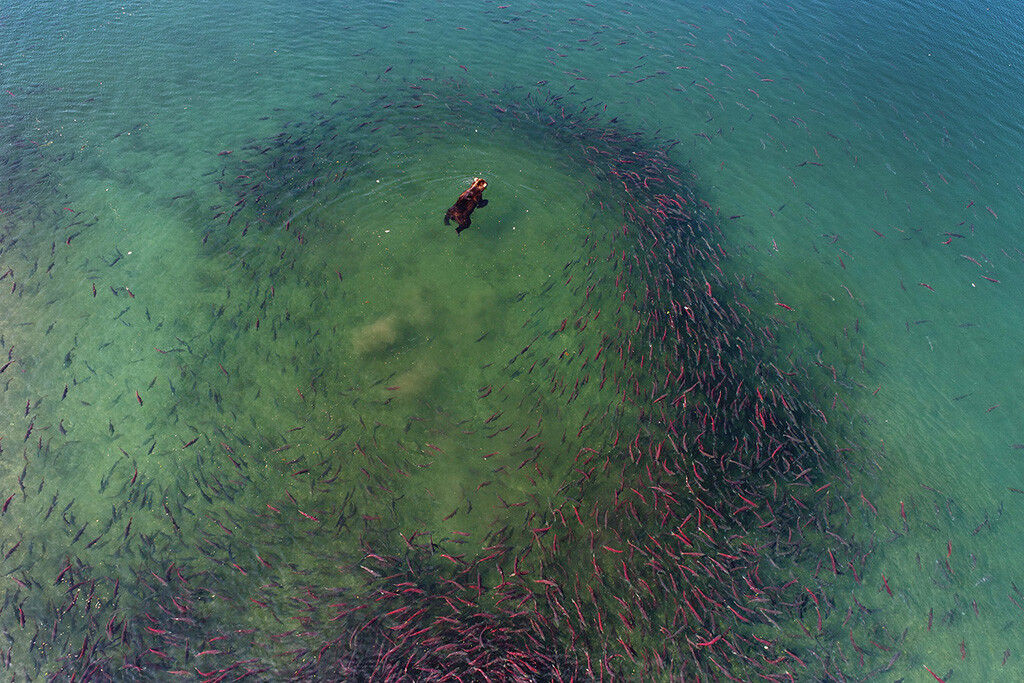 A bear and salmon.

“Kamchatka has the happiest bears ever!” Igor Shpilenok claims. “Food is plentiful – there are nuts, berries and salmon. Bears here don’t waste too much time taking care of their basic needs, so they have some time to socialize. It is here where you will find the most sociable and playful bears – even among adults.” 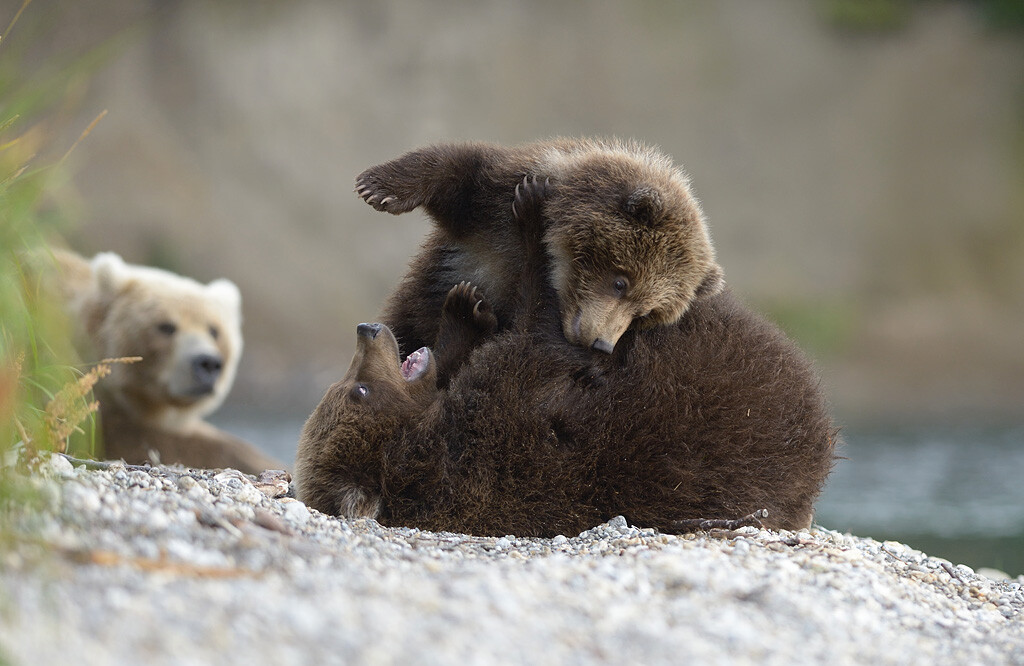 “Yuzhno-Kamchatskiy [South Kamchatka] State Nature Reserve, in the heart of which lies Kurile Lake, has the highest bear population density in the world. It hosts about 2,000 bears in a relatively small area. But, it also features another phenomenon – many of these bears learned to live next to humans and they’re not at all afraid of them, unlike in other places. It makes it easier for humans to watch them.” However, it makes it easier for the bears to watch humans, as well. 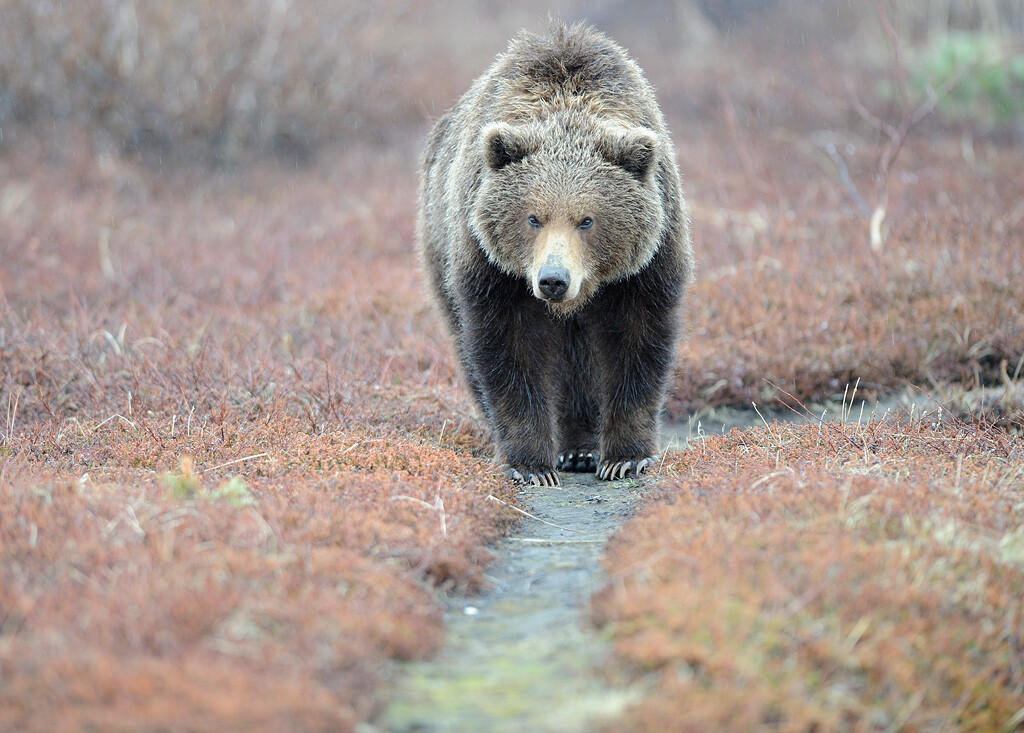 An encounter on a trail.

There are no other ways to get around the nature reserve by foot than by the bear trails. The safest method for humans is to travel in groups and talk loudly or sing. “If a bear approaches, you need to stop, hold hands and make noise – so the bear thinks that you are one large organism.” 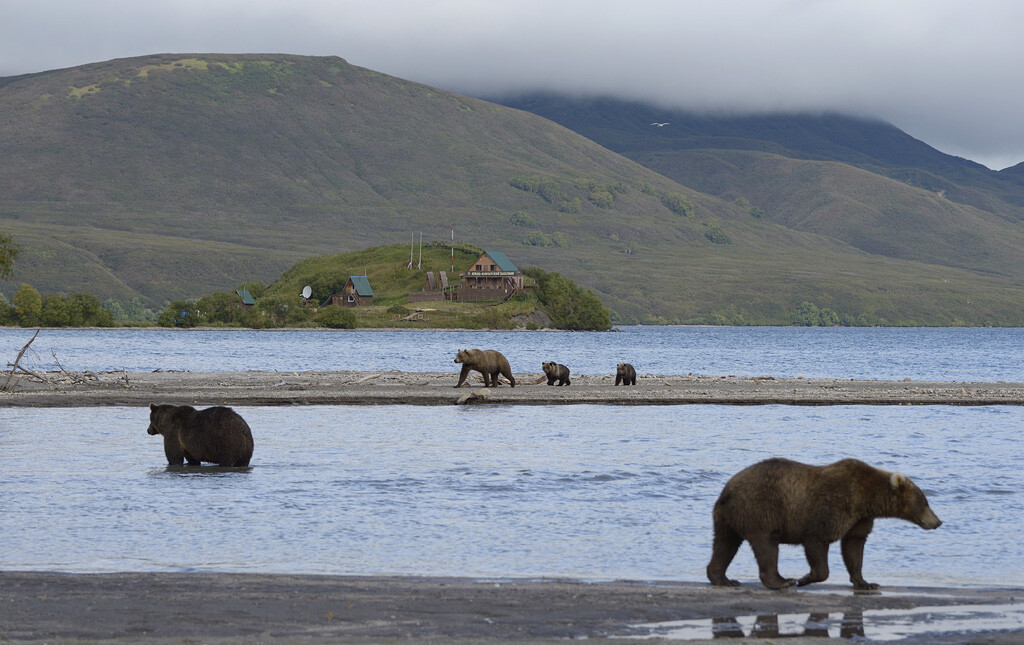 The important thing is that the bears don’t figure out that you have food; once they have tried human food, they will look for something similar in the future. In Kamchatka’s Kronotsky Nature Reserve, even crumbs left after a tourist lunch should be either burned or thrown into the water. The food supply should be stored away from the camp. “Human calorie-rich food is irresistibly appealing to bears. Their eyesight may be bad, but their sense of smell is great. They can even catch the scent of canned food.” 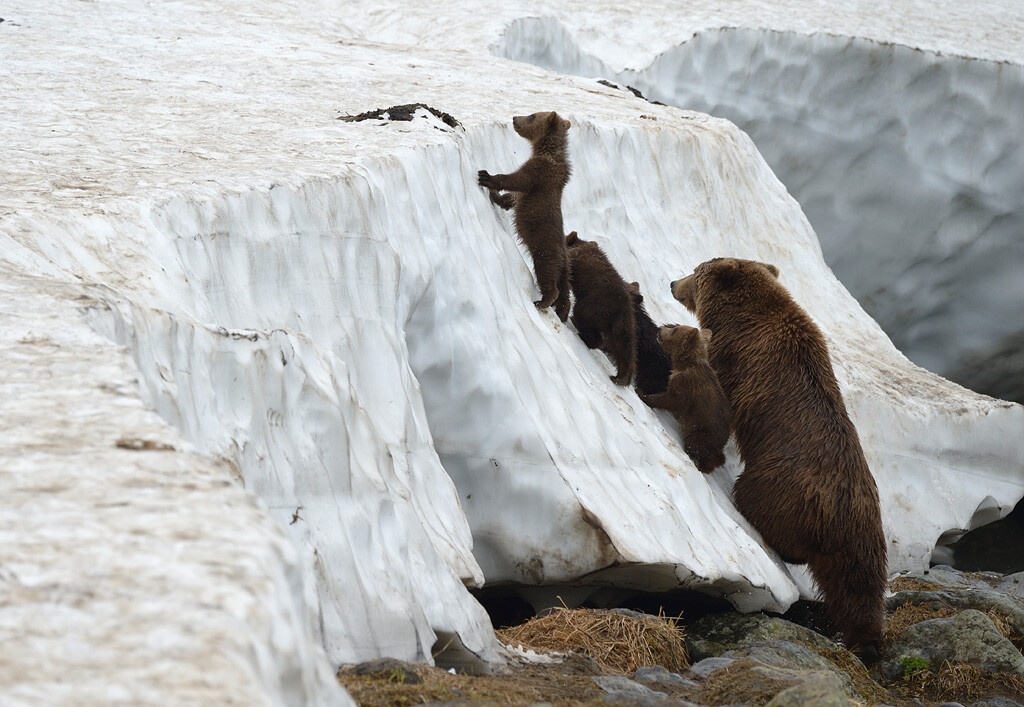 “Many people today feed bears from their cars. Humans feel safe inside their cars, but the bears, afterwards, lunge at hiking groups, looking for food. And the fate of such bears is always grim – they get shot. Therefore, if someone has the idea of feeding a bear, they must understand that they are killing it.”