The 7 most UNUSUAL stations of the St. Petersburg Metro (PHOTOS)

Alex 'Florstein' Fedorov (CC BY-SA 4.0)
St. Petersburg is a city of palaces and museums. And visitors can find interesting things not only on the surface. Step down into the St. Petersburg Metro – and you’ll be greeted by tons of marble, giant columns and grand mosaic panels. We listed the seven most interesting subway stations and also added a little list of places to see at each stop! 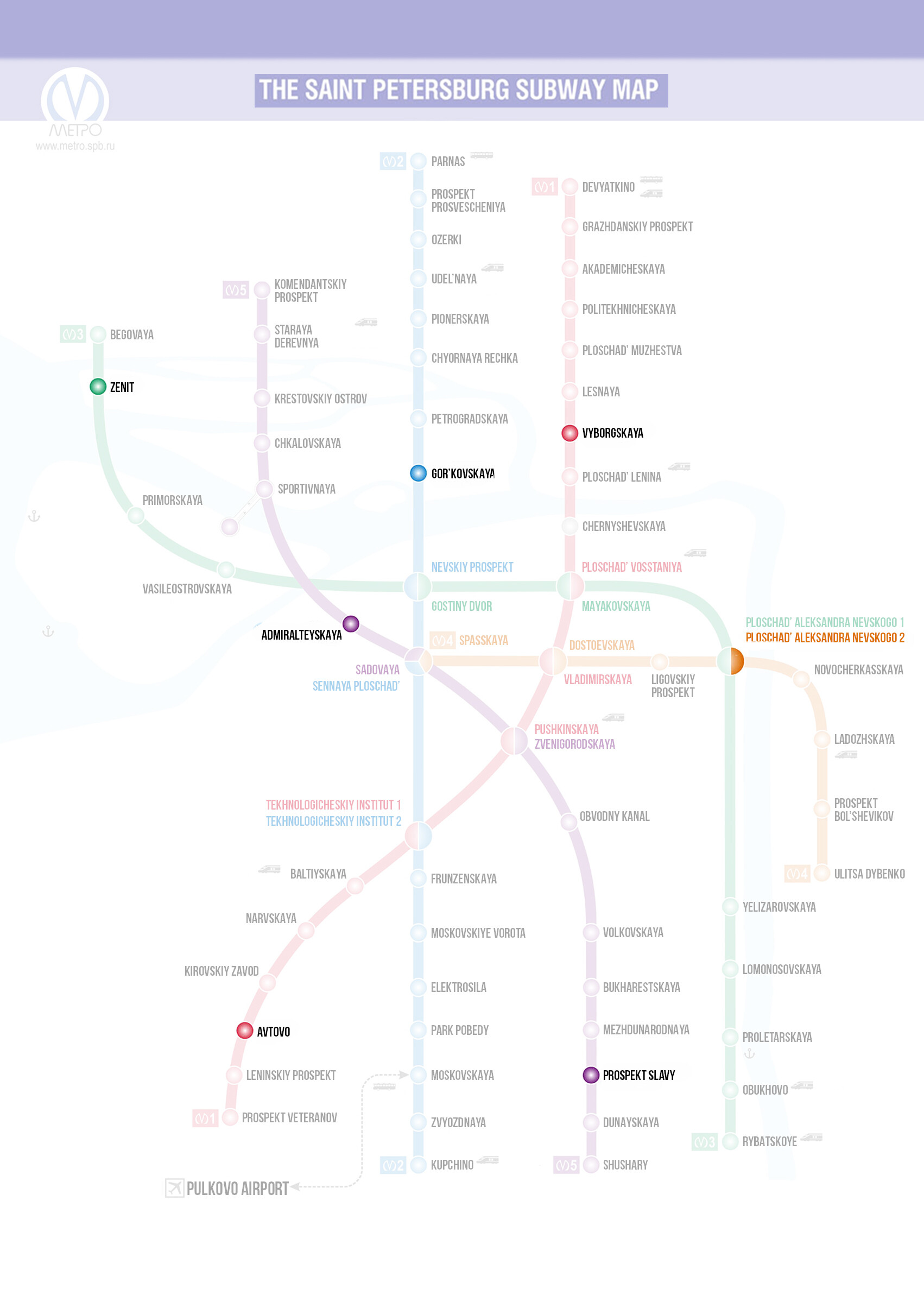 As was planned by the architects, this station was to resemble a “crystal palace”. Its arch is supported by 46 columns: 30 of them are lined with marble, the other 16 – with molded glass. 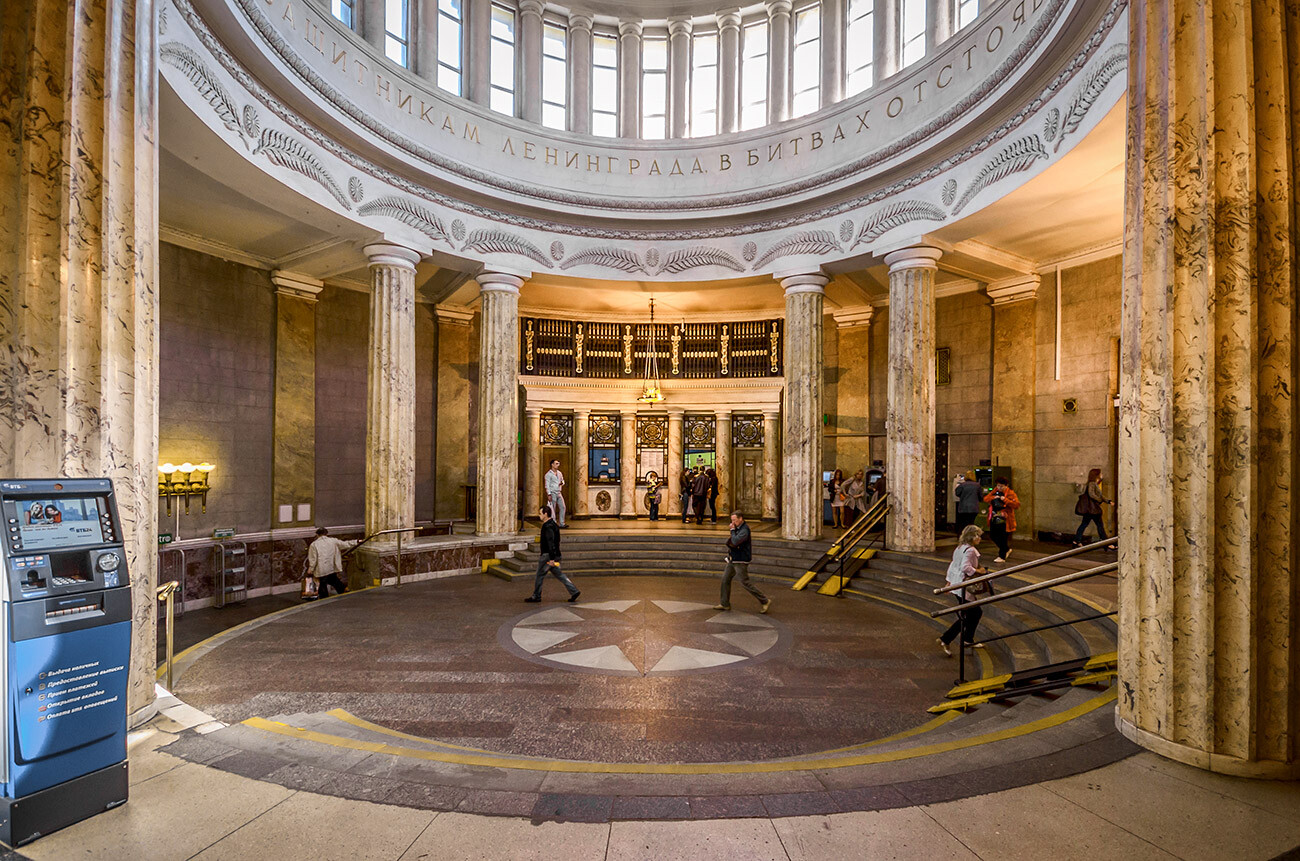 This station is themed after the defense of Leningrad during the Great Patriotic War. A giant mosaic panel with the word “Victory” decorates the station; you can also see swords, laurel wreaths and other symbols of triumph on chandeliers and lamps. 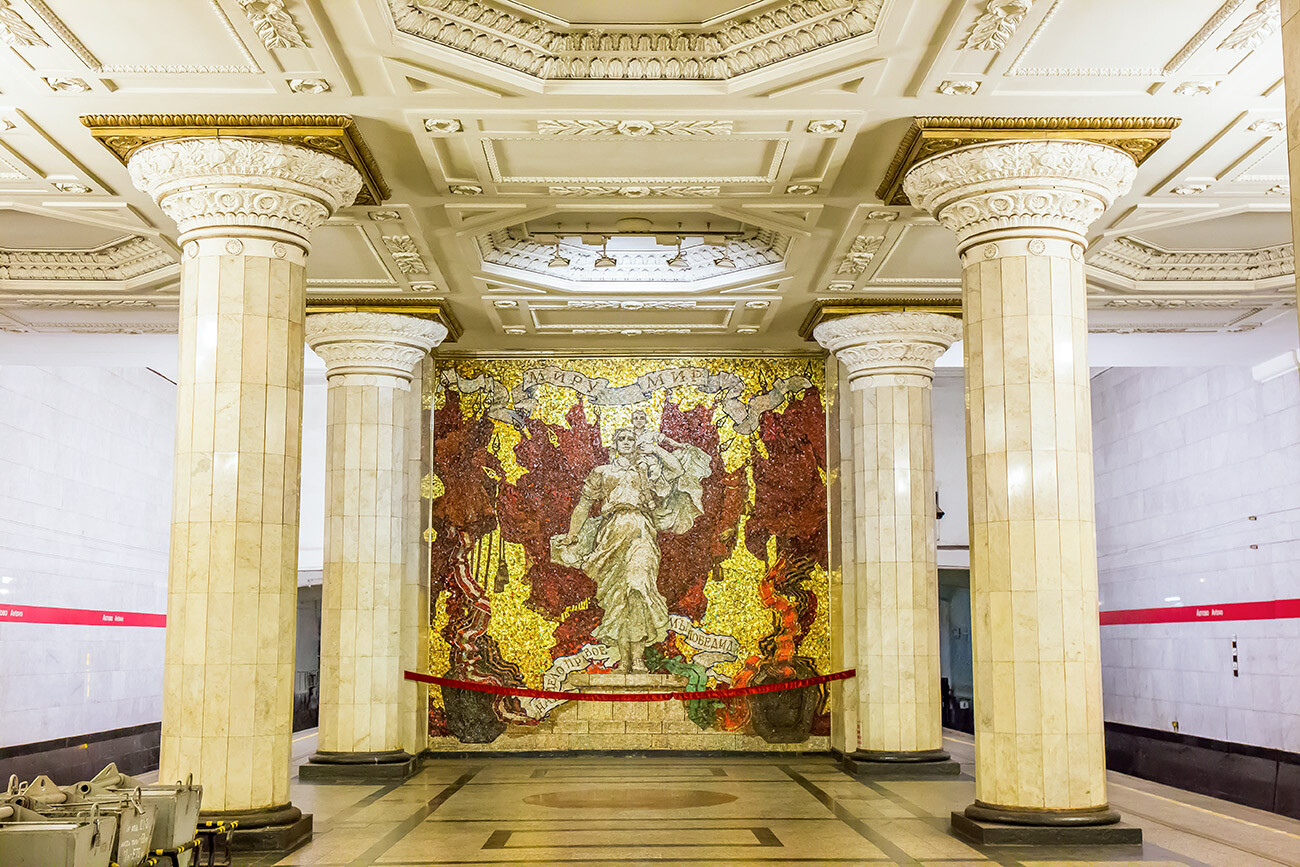 By the way, in 2014, Avtovo made it on the list of the 12 most beautiful metro stations in the world, according to The Guardian newspaper. 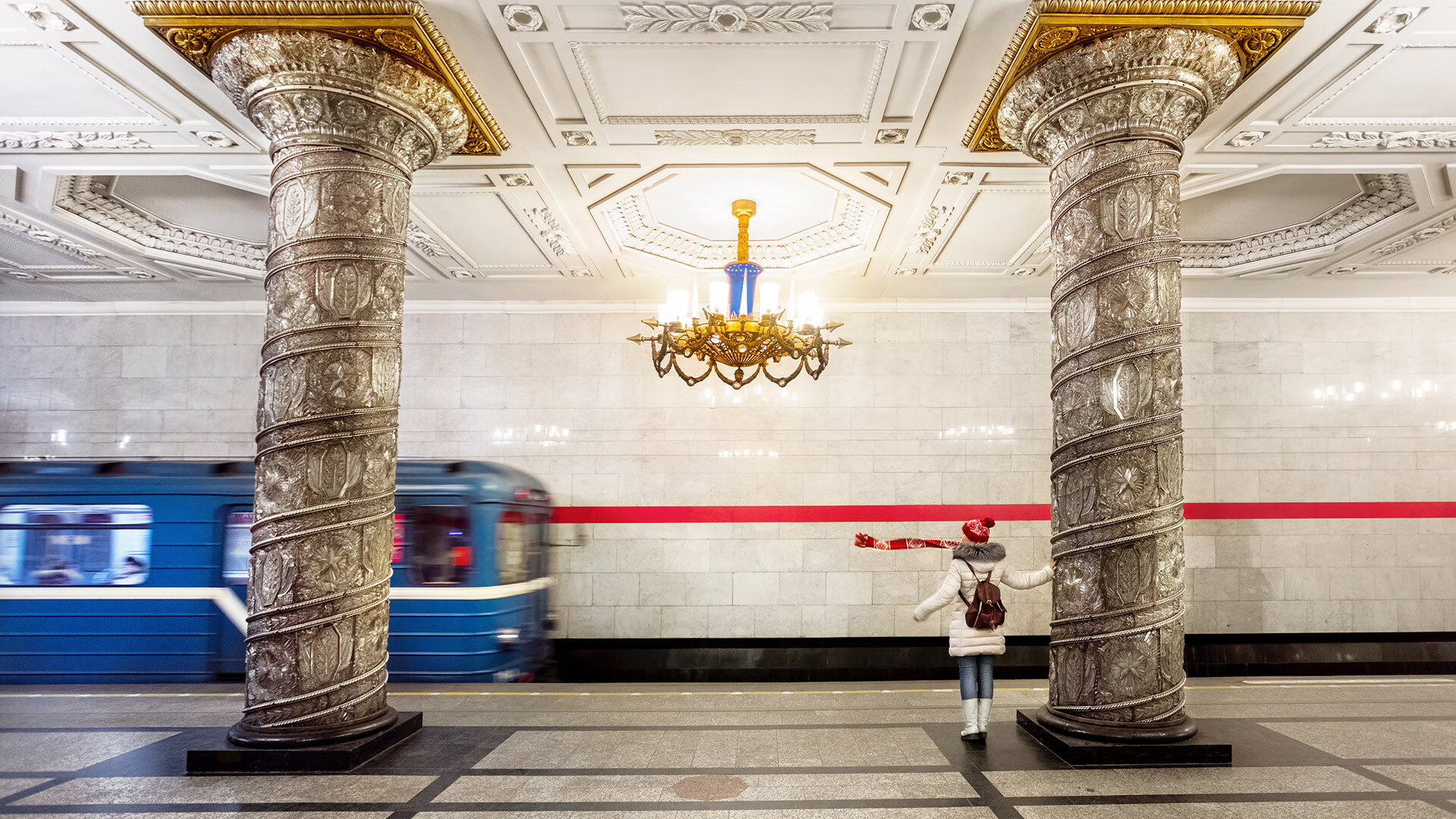 This station has also been featured in movies – in one of the scenes of the movie ‘The Adventures of Sherlock Holmes and Dr. Watson’ (1980), the renowned detective finds the body of a victim in the Avtovo depot. Of course, in the story, they are in England; the Avtovo depot, conveniently placed between the red line stations, played the role of the abandoned British railways brilliantly. 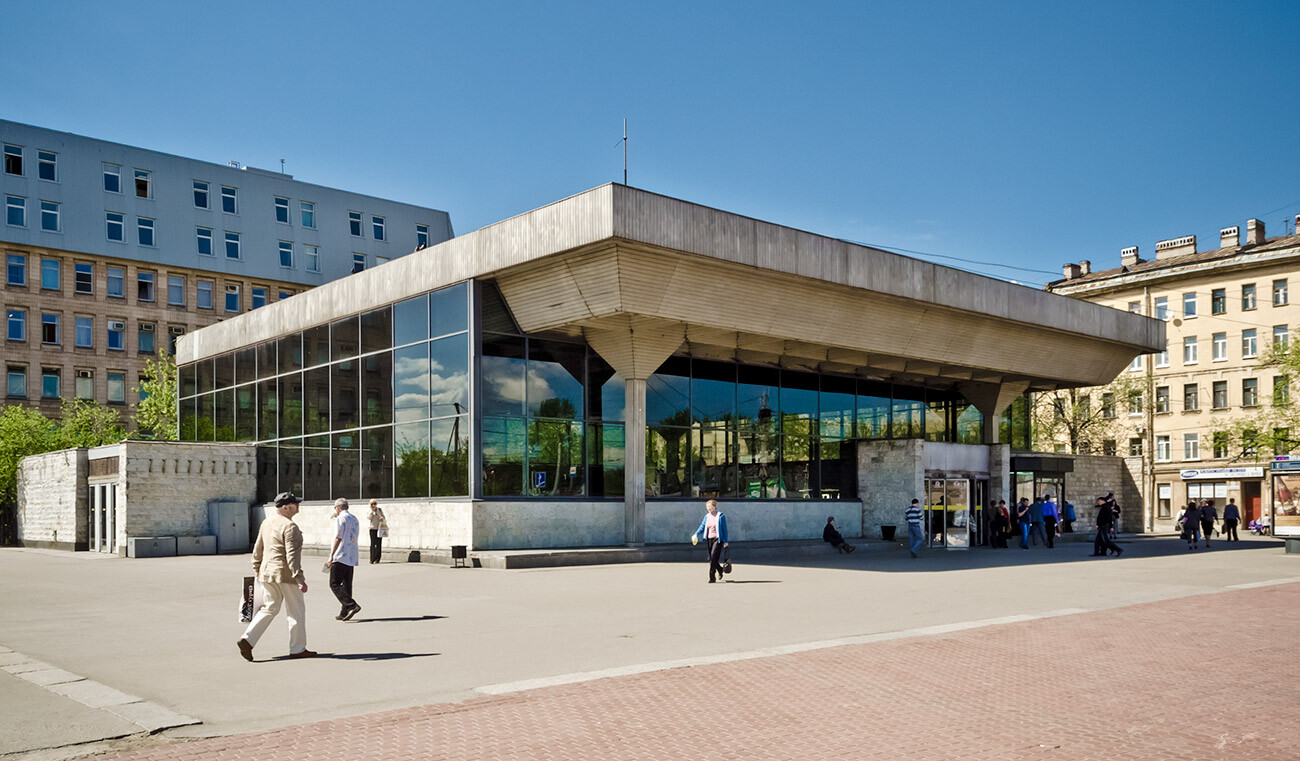 Vyborgskaya station is the only St. Petersburg metro station (and probably in the world!) with an actual functioning greenhouse. The garden features more than 50 types of houseplants and some of them have been growing there since Vyborgskaya was founded – in 1975. The greenhouse appeared thanks to the metro workers, who still tend to the flower garden. By the way, some of the plants were brought by the passengers. On sunny days, the station looks especially pretty.

Its underground part is decorated with travertine, a limestone porous rock, while the floors are paved with gray granite. Up the stairs there’s a large panel – depicting workers who participated in the 1917 Revolution. On the inside, the station looks quite typical, so we recommend going upstairs straight away to visit the greenhouse. 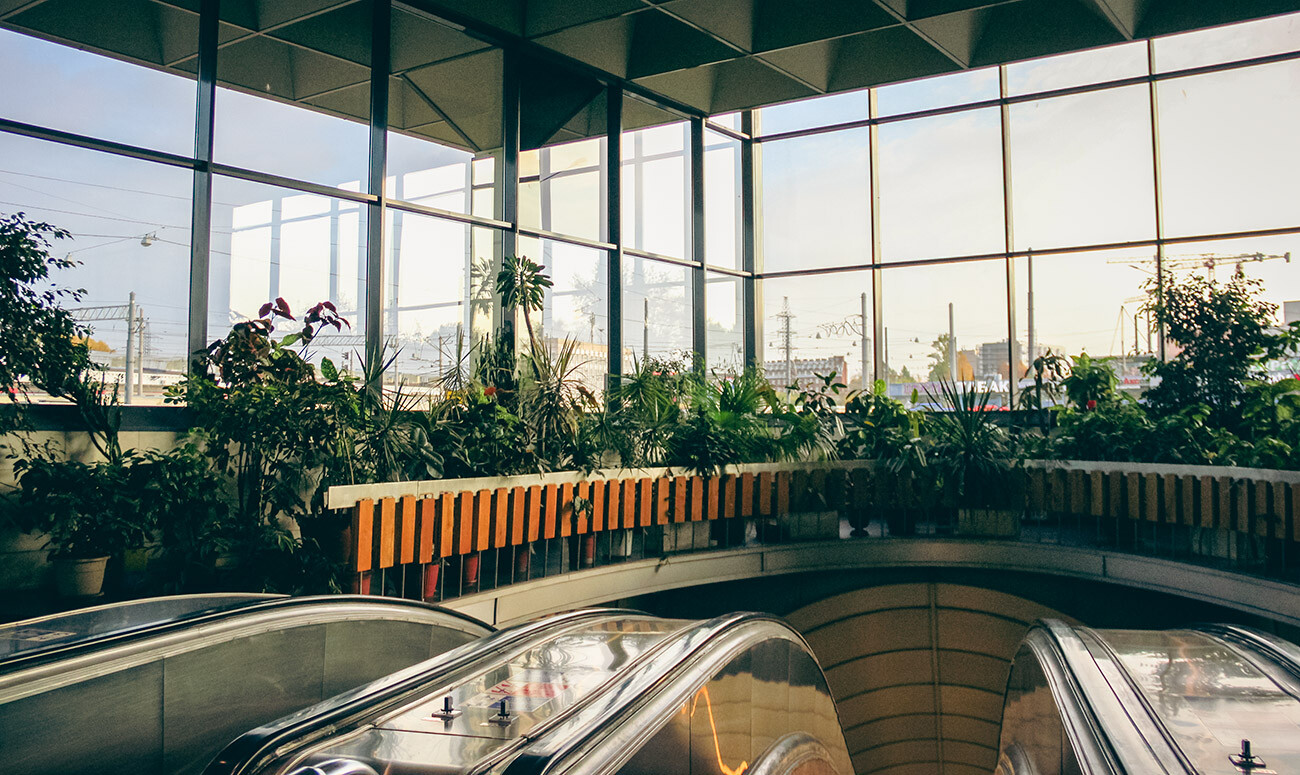 3. Gorkovskaya station: A flying saucer in the city center 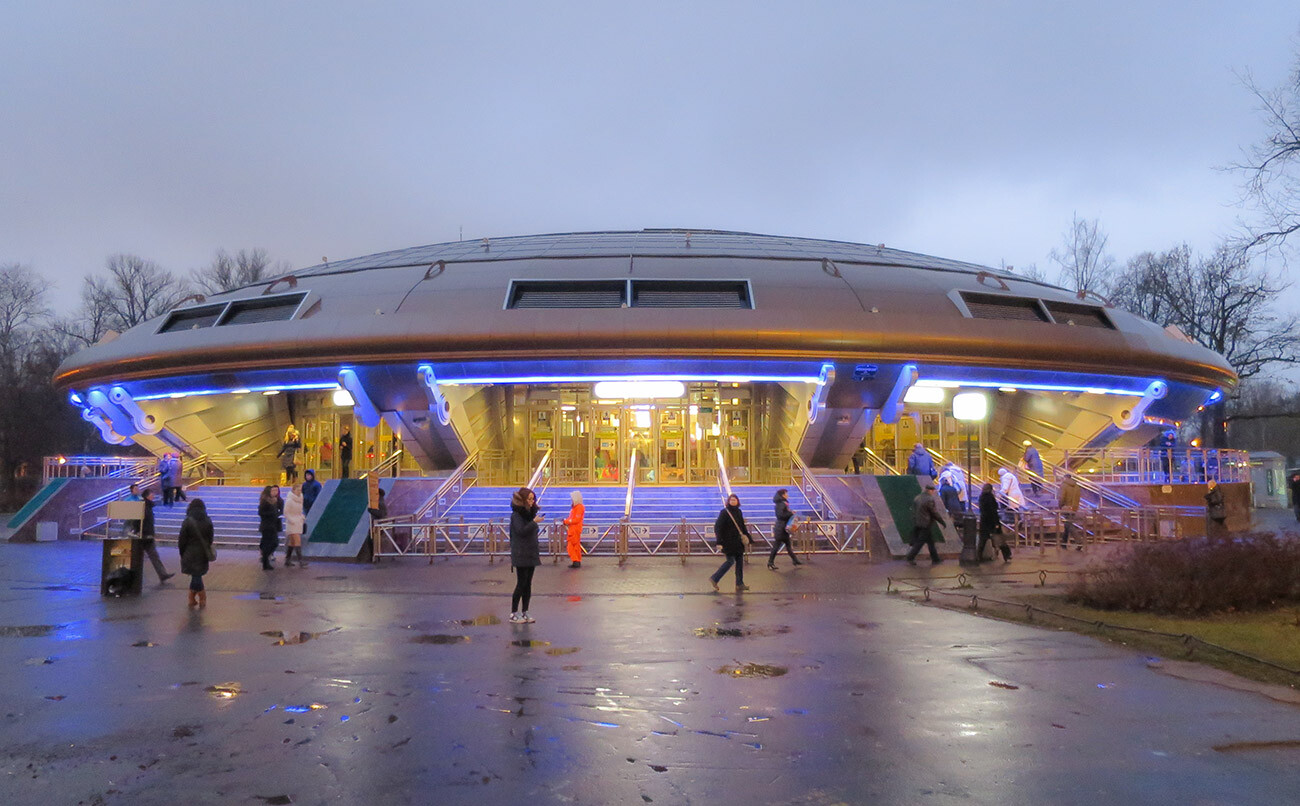 This is the most “cosmic” station in the city – it’s built in the shape of a giant flying saucer. This was not Gorkovskaya’s first look. The station was opened in 1963; back then, it was just a usual pavilion with a round roof. In Soviet times, there was a cafe in the upper vestibule, where you could have a snack or even have a glass of champagne. In 2009, the station was reconstructed and Gorkovskaya turned into a “UFO”.

Per the architects’ plan, the upper vestibule’s arch should have resembled the Moon with its craters. However, not all locals understood the idea and instead of the Earth’s satellite, they saw… a cow’s udder! 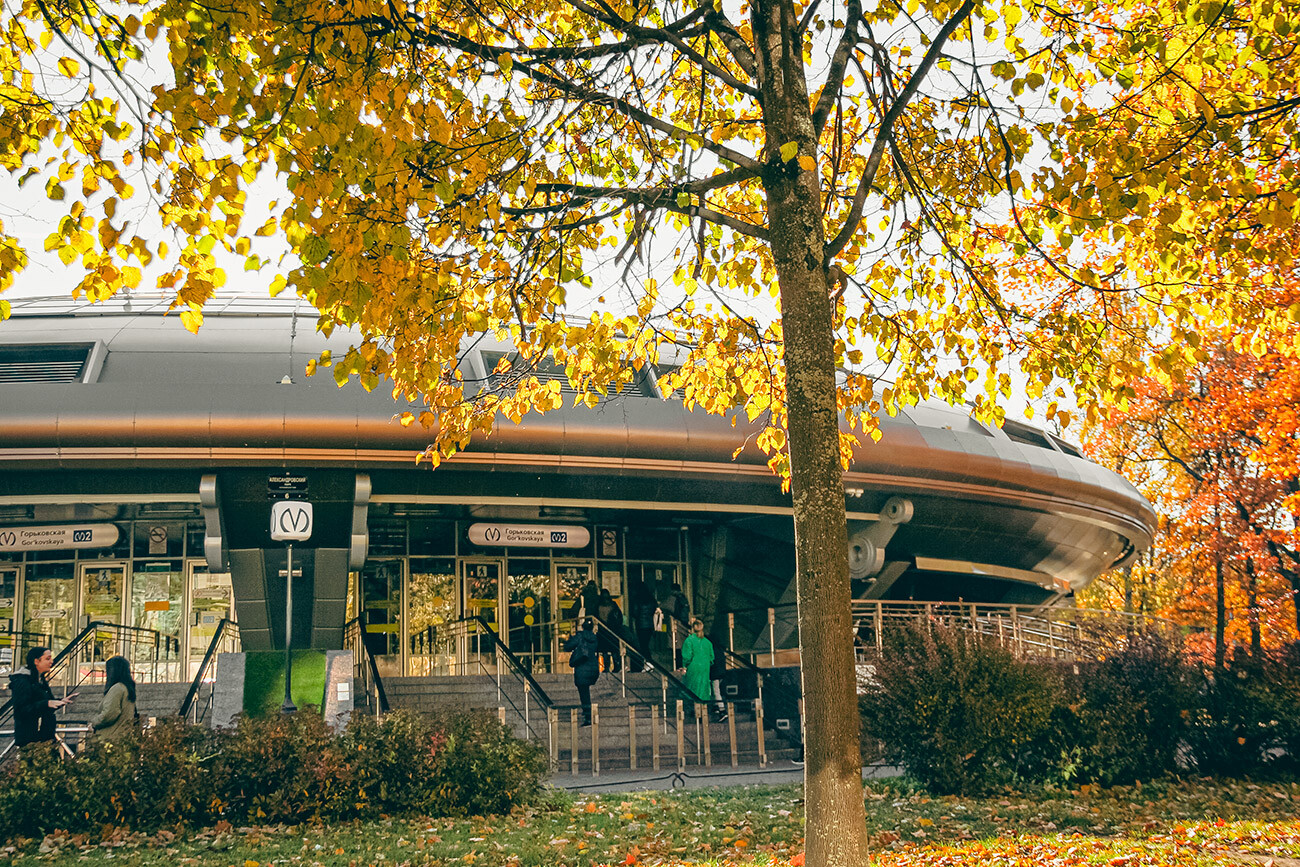 4. Zenit: The station of soccer 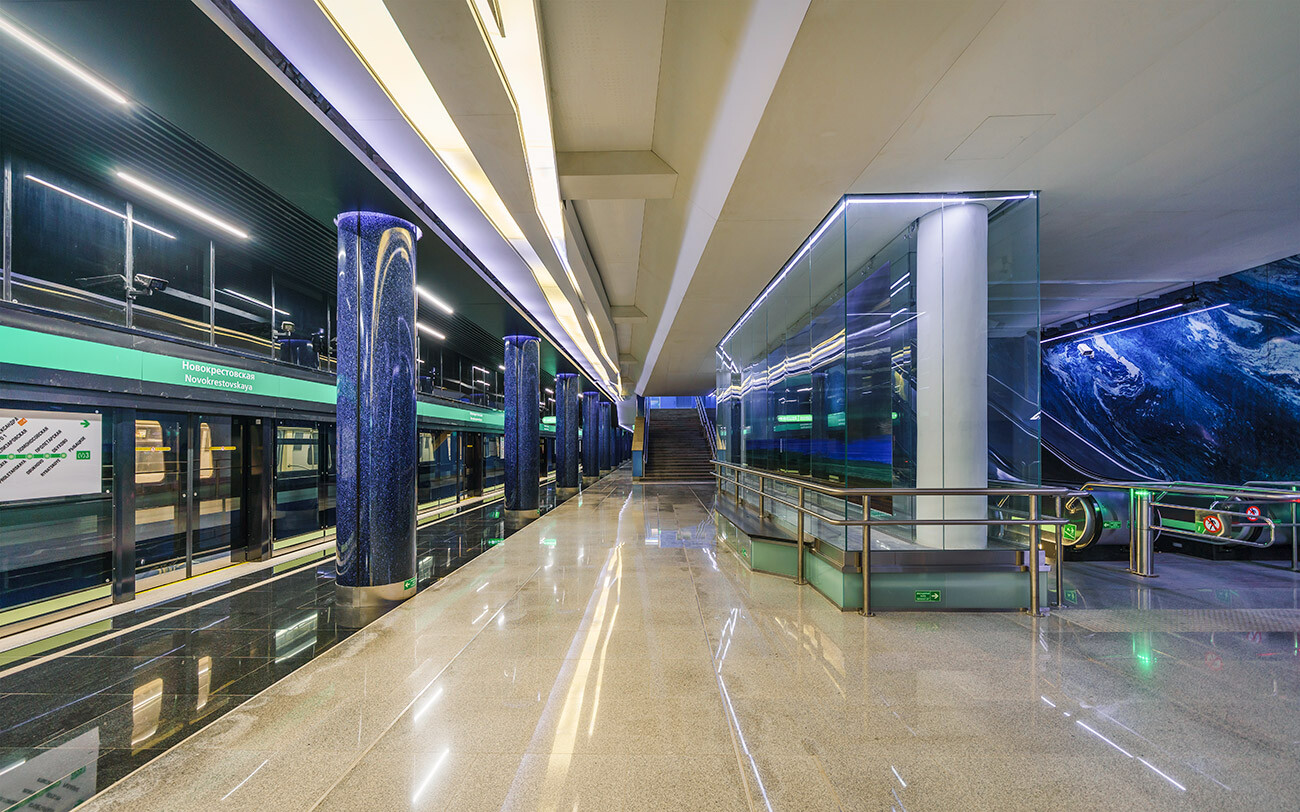 This station was opened for the 2018 FIFA World Cup. The final part of the Cup was held in St. Petersburg, Russia, so Zenit is situated near the Gazprom Arena Stadium. The station is named after the city’s soccer club – F.C. Zenit – of which the residents of St. Petersburg are very proud.

By the way, initially the station was given the name Novokrestovskaya. Later, it was renamed, but some residents of the city continue to use the former name. 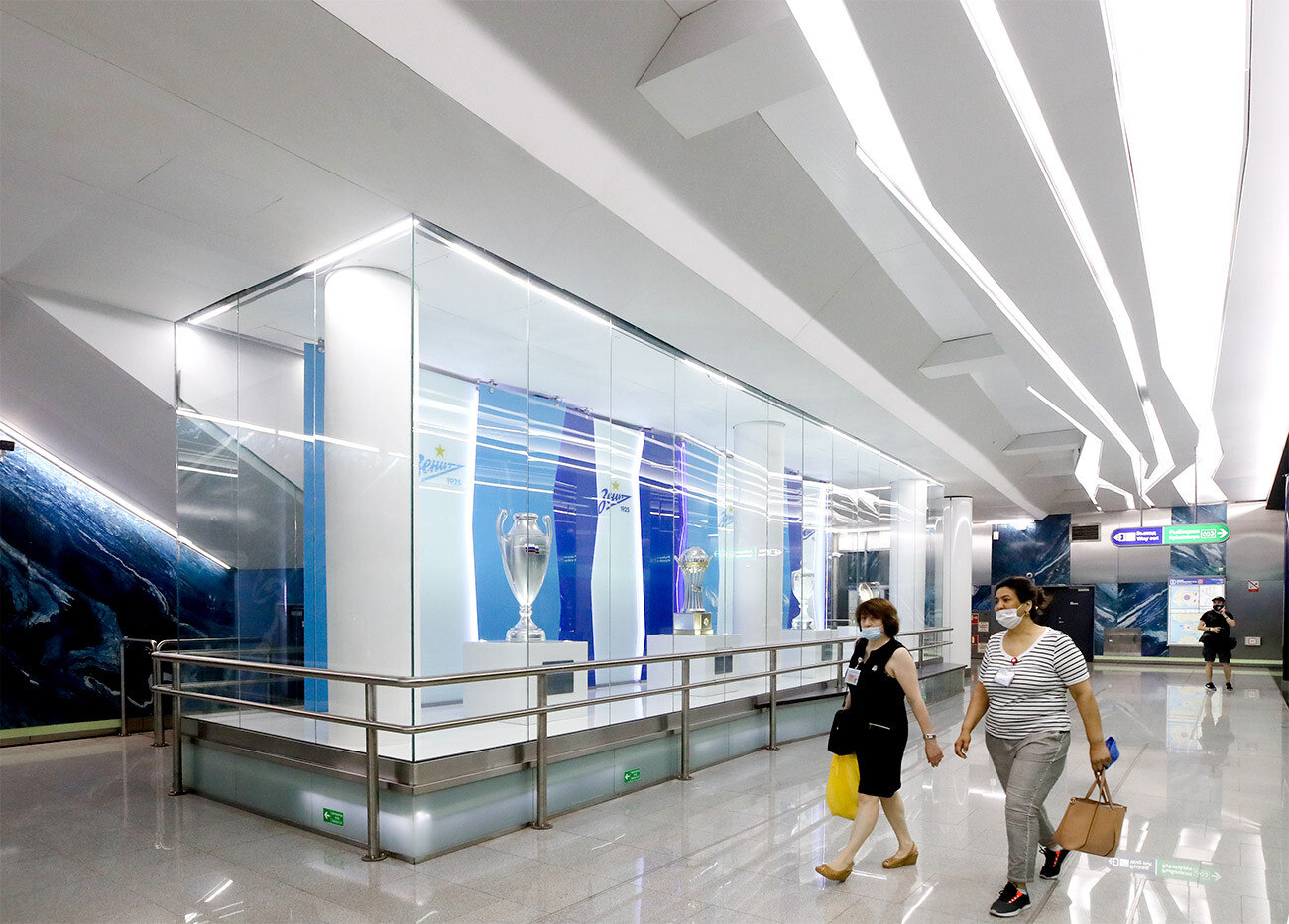 The station is covered with dark-blue stone. The white blotches on the walls depict the foaming waves of the Gulf of Finland. 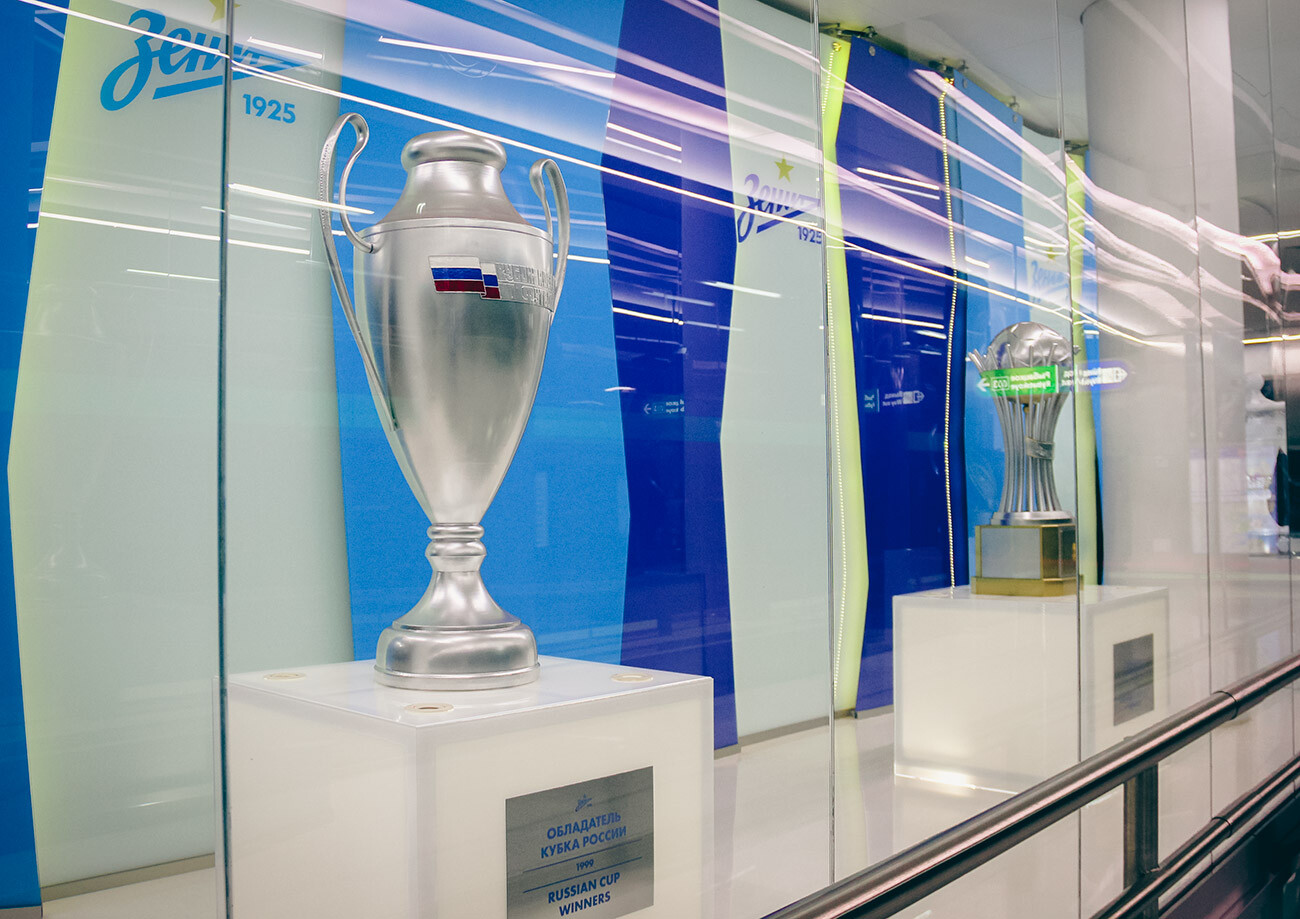 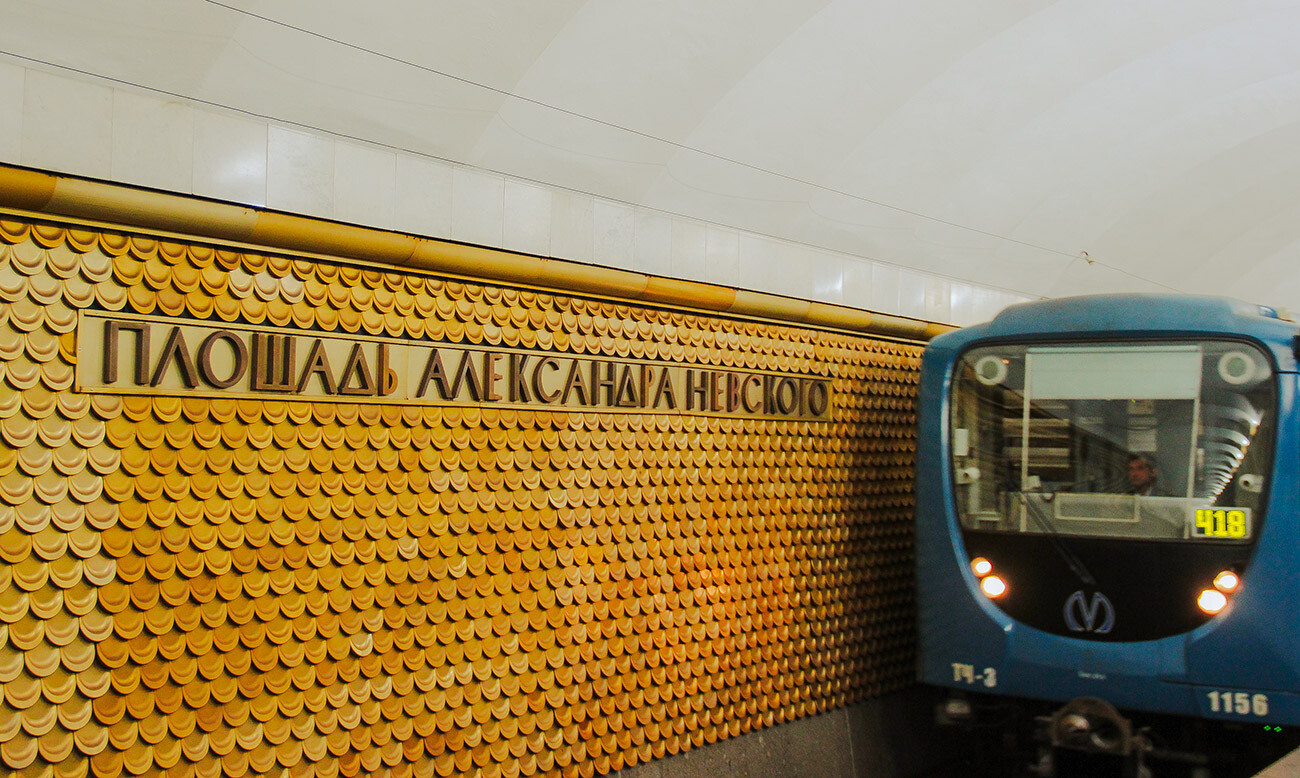 This is the “scaliest” station of the St. Petersburg Metro. Its walls are clad in armor made of hundreds of golden scales. This armor shimmers beautifully when a train arrives at the station.

The interchange from the orange to the green line is decorated by a composition featuring horsemen. Take a good look: there’s five horsemen, but only four horses. Back during the sketching stage, an error was made that the artists simply overlooked. The locals chuckle at the composition and simply call it ‘Five guys and four horses’. 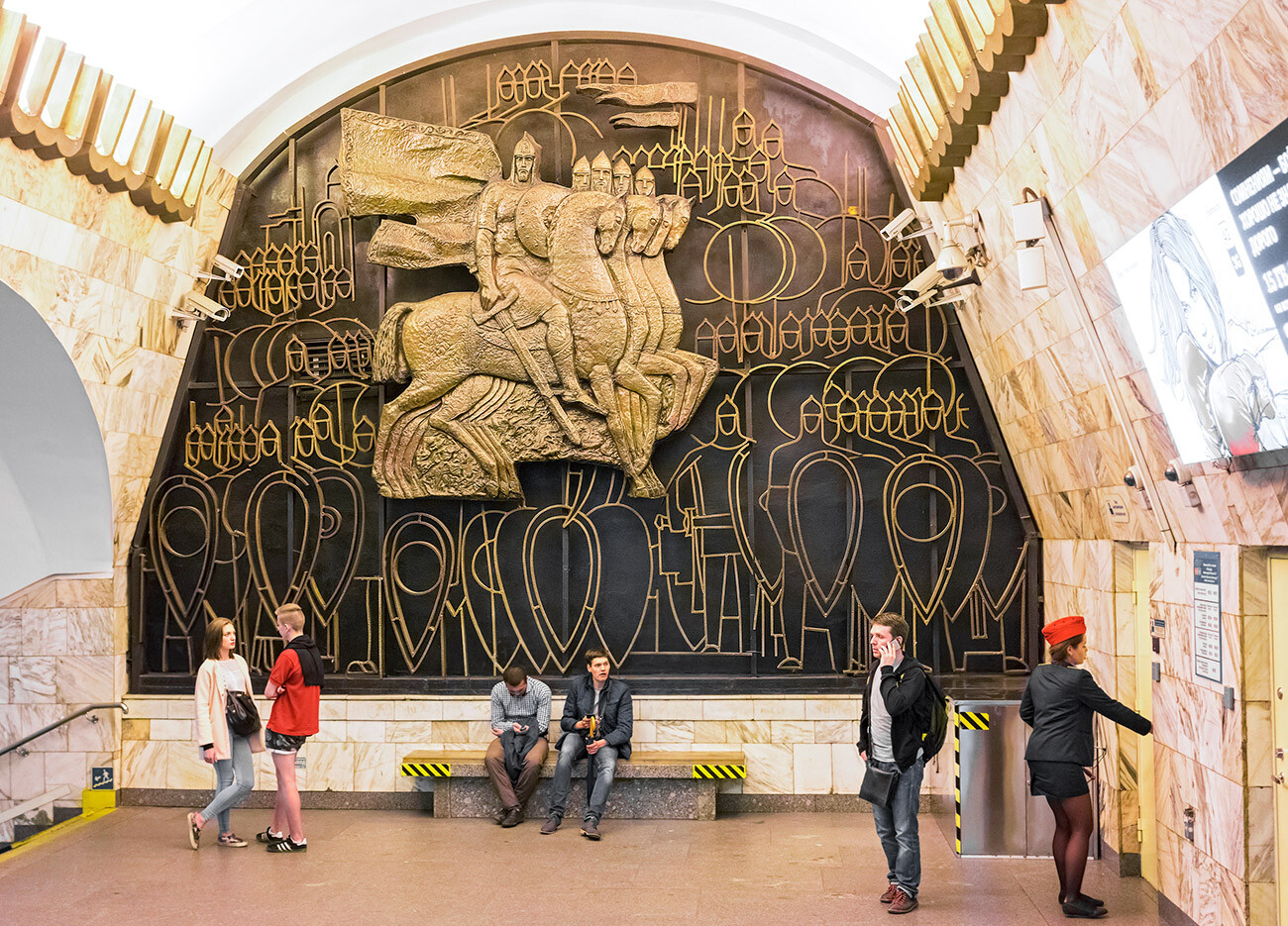 The upper vestibule of the Alexander Nevsky Square-2 station is decorated by a giant mosaic – ‘Battle on the Ice’. Alexander Nevsky himself is depicted in the middle of the mosaic with his sword raised, ready to strike down a crusader knight. 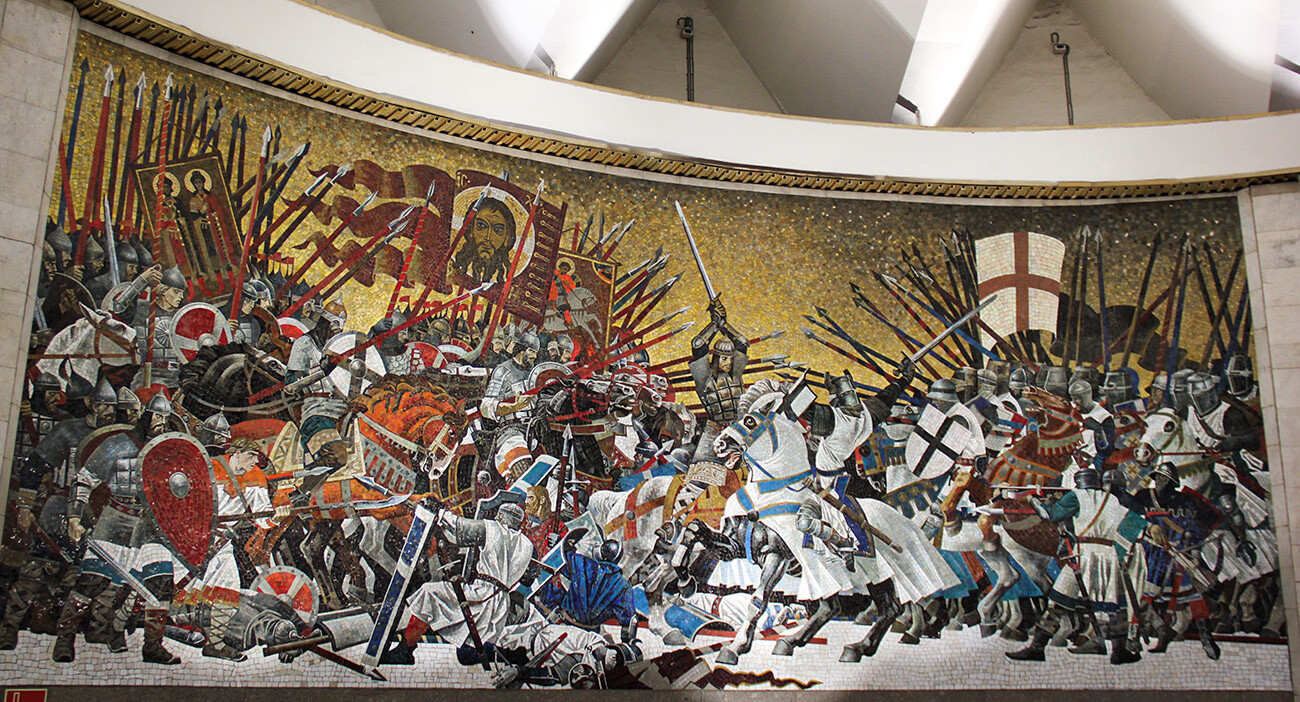 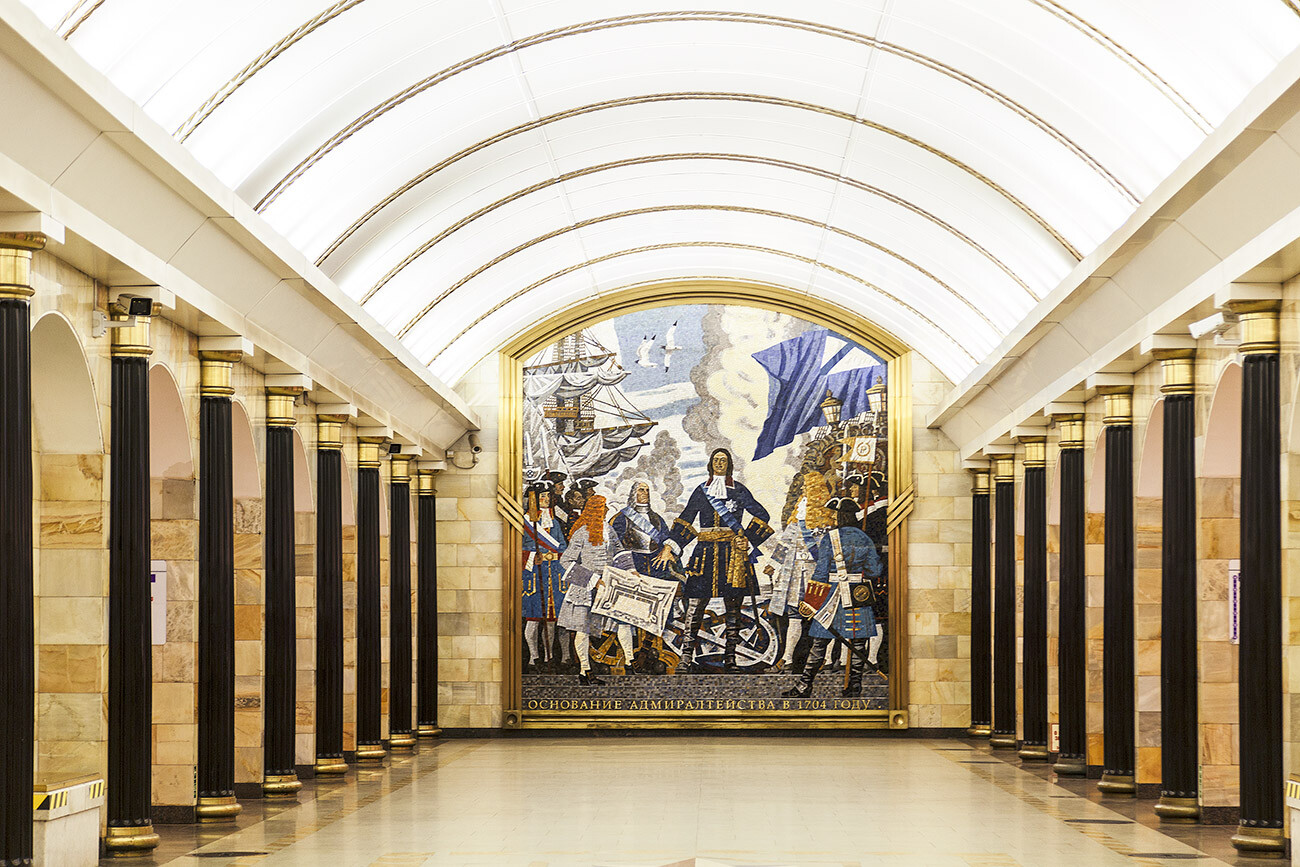 Admiralteyskaya lies at a depth of 86 meters – it is one of the deepest metro stations in the world. St. Petersburg is built on marshes: closer to the surface, the ground is soft and unsuitable for building tunnels. So the stations had to be built at a great depth. 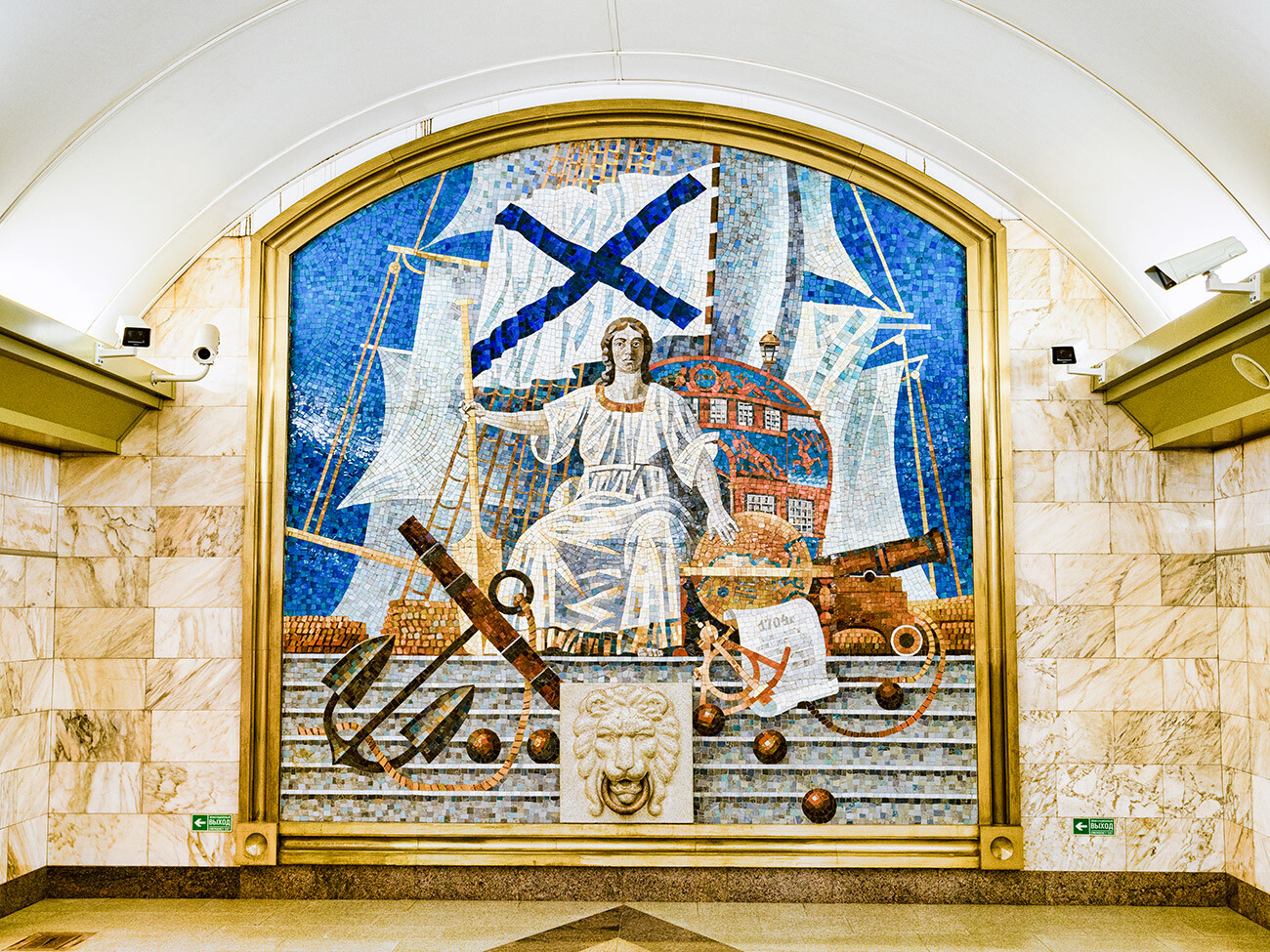 An interesting fact – the vestibules of the stations are located higher than the tunnels: when approaching a station, the train climbs up and then rolls down, gaining speed. This project was approved back in the 1940s, which reduced the construction costs. As such, the deepest points of the station lie in the tunnels. 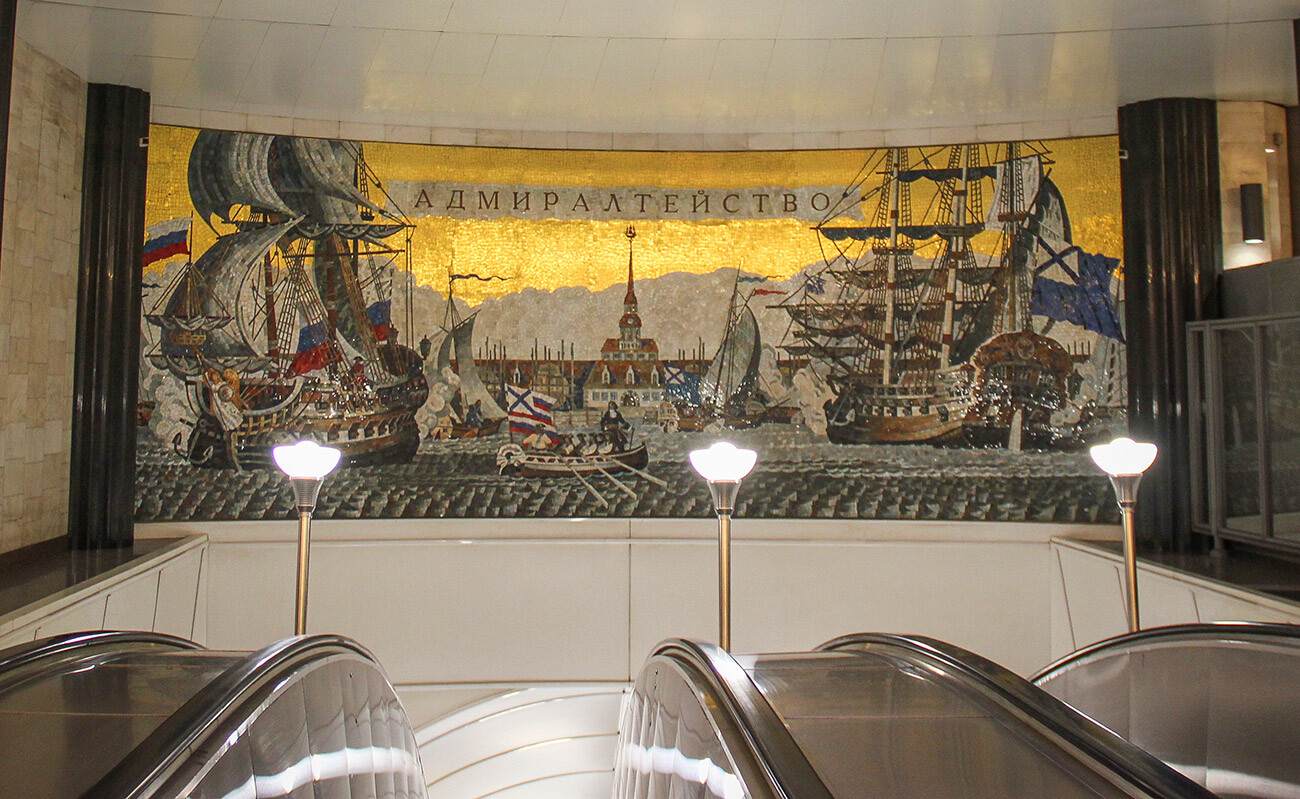 By the way, due to a range of complications, Admiralteyskaya couldn’t be opened for a full 14 years: it was planned back in 1997, but they managed to open it only in 2011. All this time, the trains passed Admiralteyskaya without stopping. So, the locals started nicknaming it a “ghost station”. 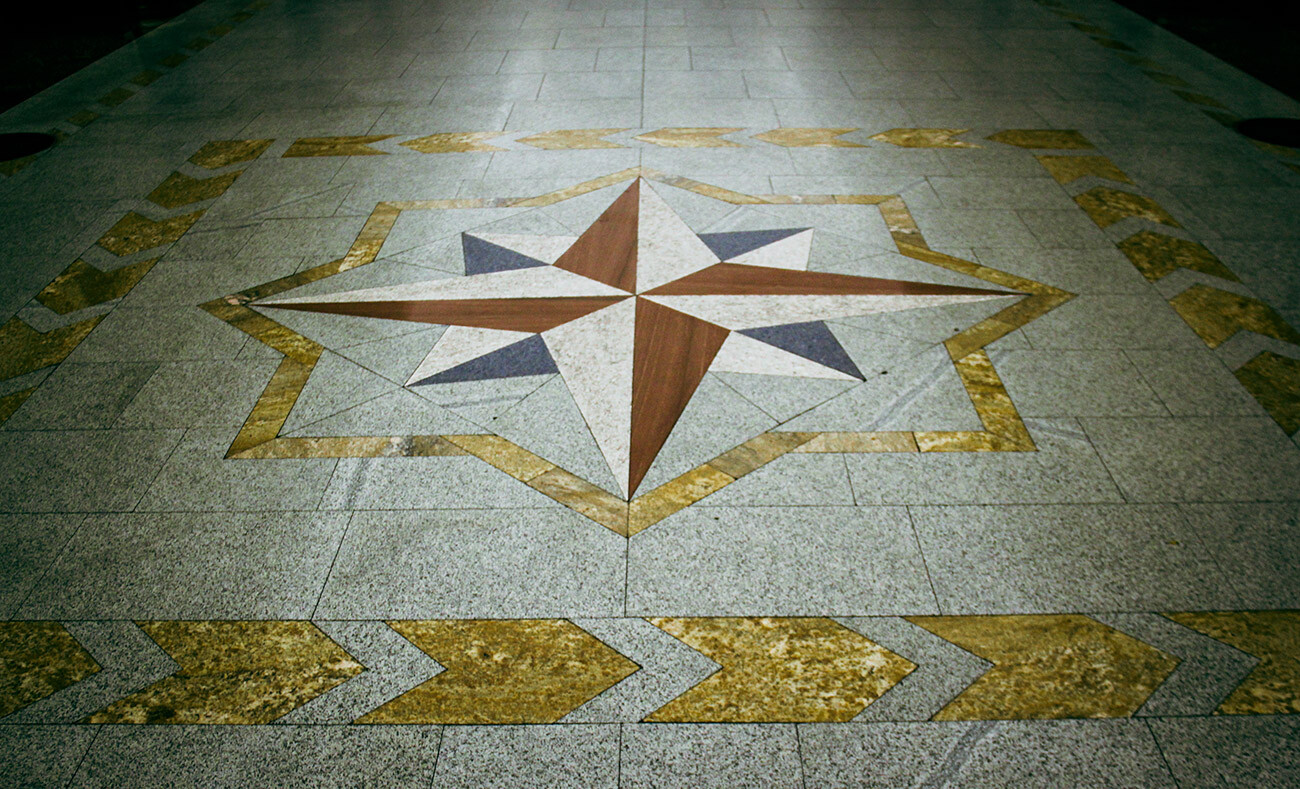 The station has a marine design: in its vestibule, you can see the ‘Founding of the Admiralty’ mosaic, as well as a panel with ships at the entrance. The station is also decorated with anchors, the floor features a wind rose and the same little ship that can be spotted on the Admiralty Building’s spire sits next to the station’s name. 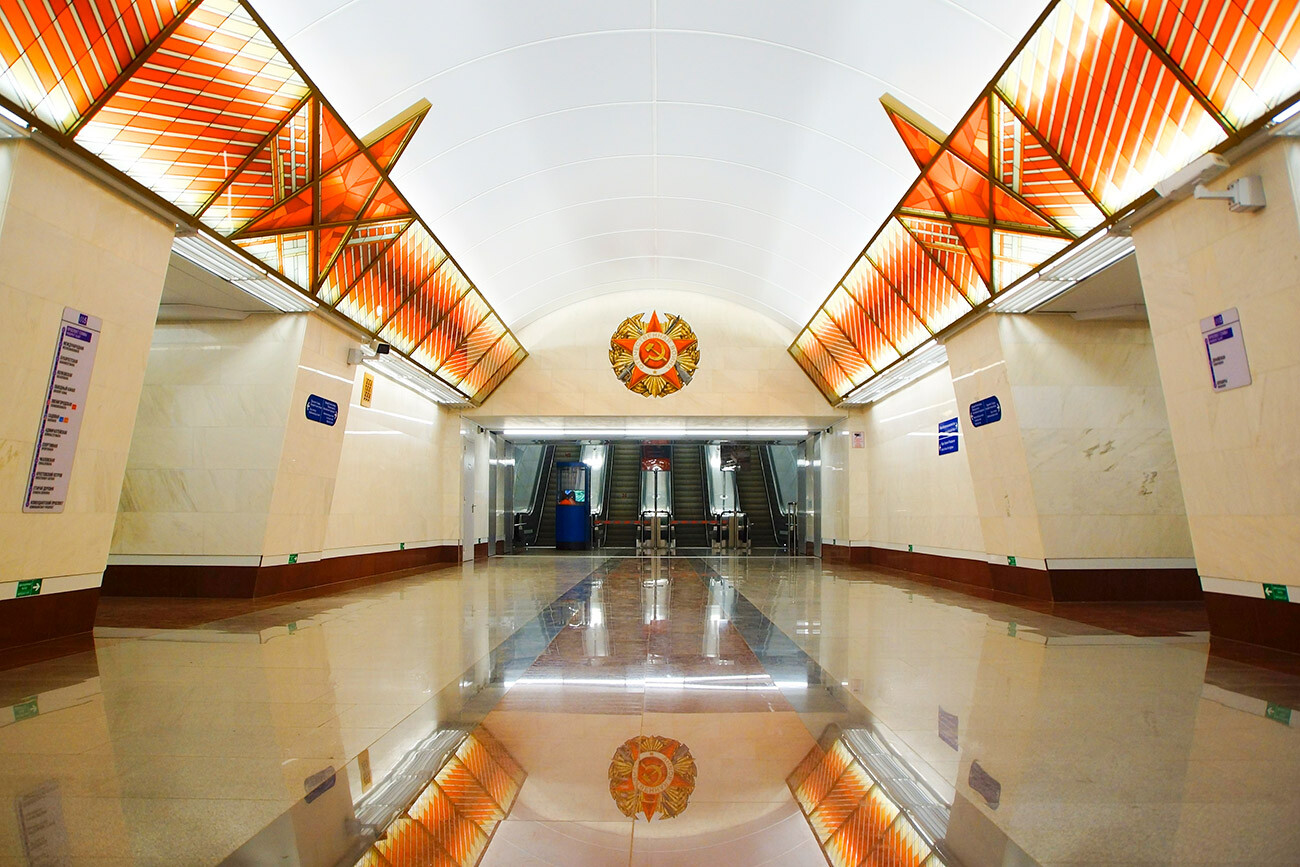 This station was opened in 2019. The main emphasis in its design are stained glass panels with Soviet stars that stretch along the entire vestibule. White marble is used everywhere that matches the bright-red stained glass stars beautifully. 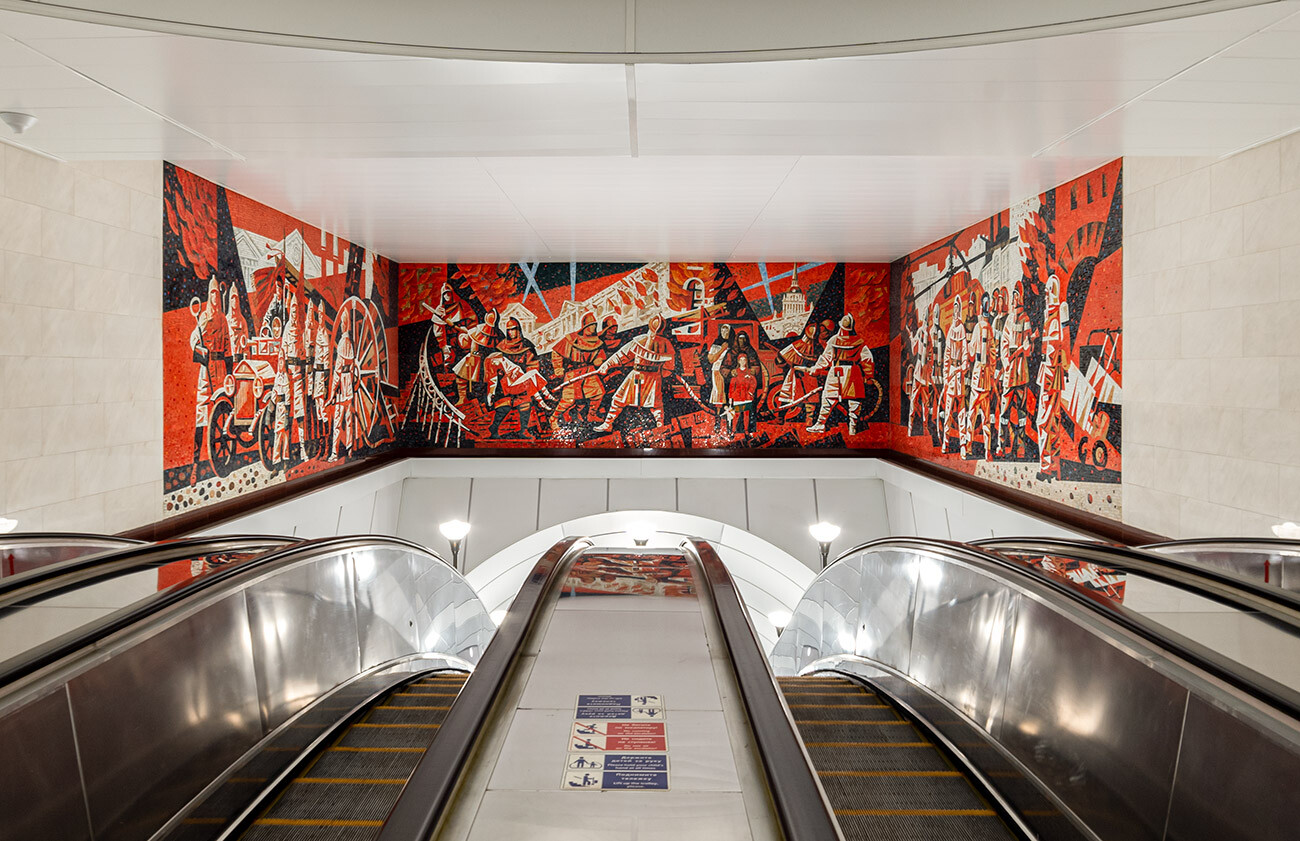 But it’s up top where you will find the most interesting part. The southern vestibule of the station is dedicated to heroic firemen. The arch is decorated by a giant mosaic; fire trucks are exhibited in the passage – from the very first, pre-Revolution carriage, to modern vehicles. 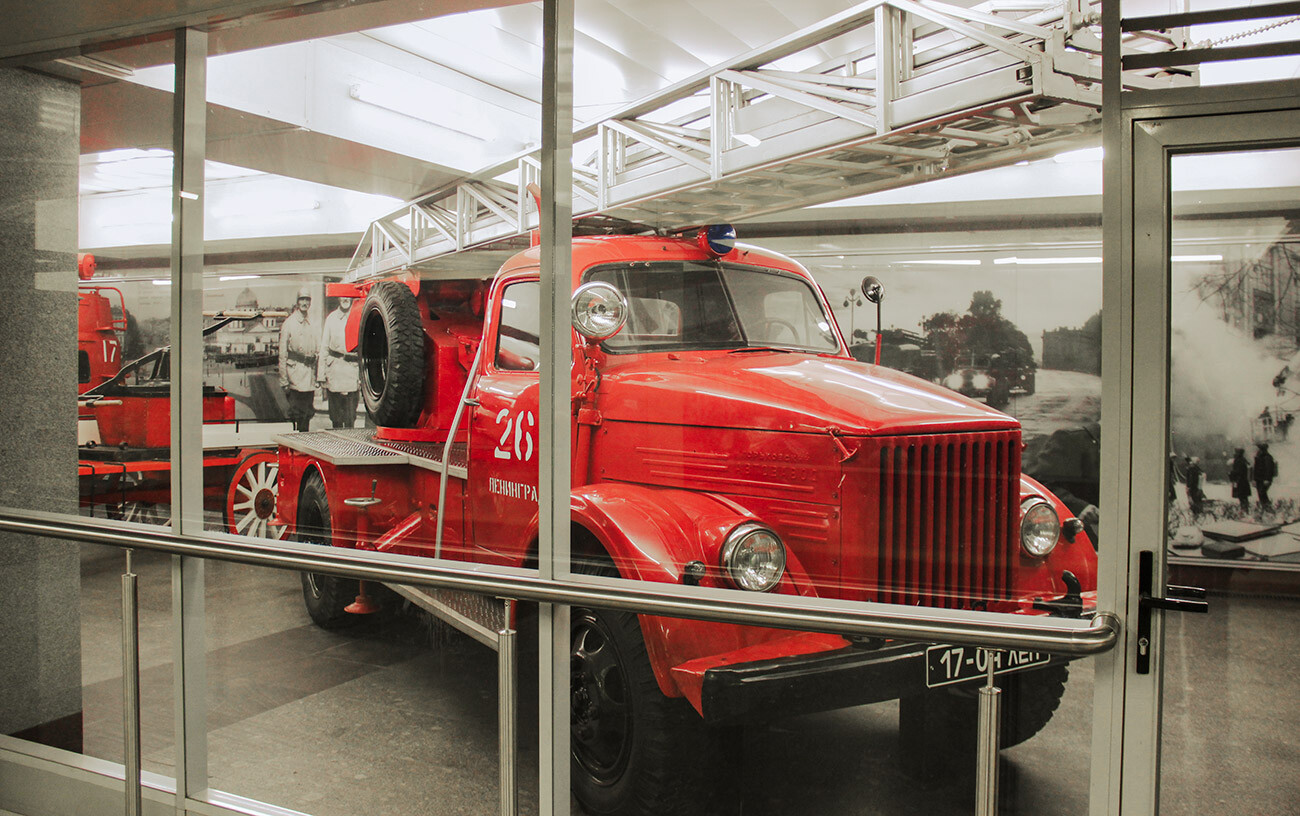