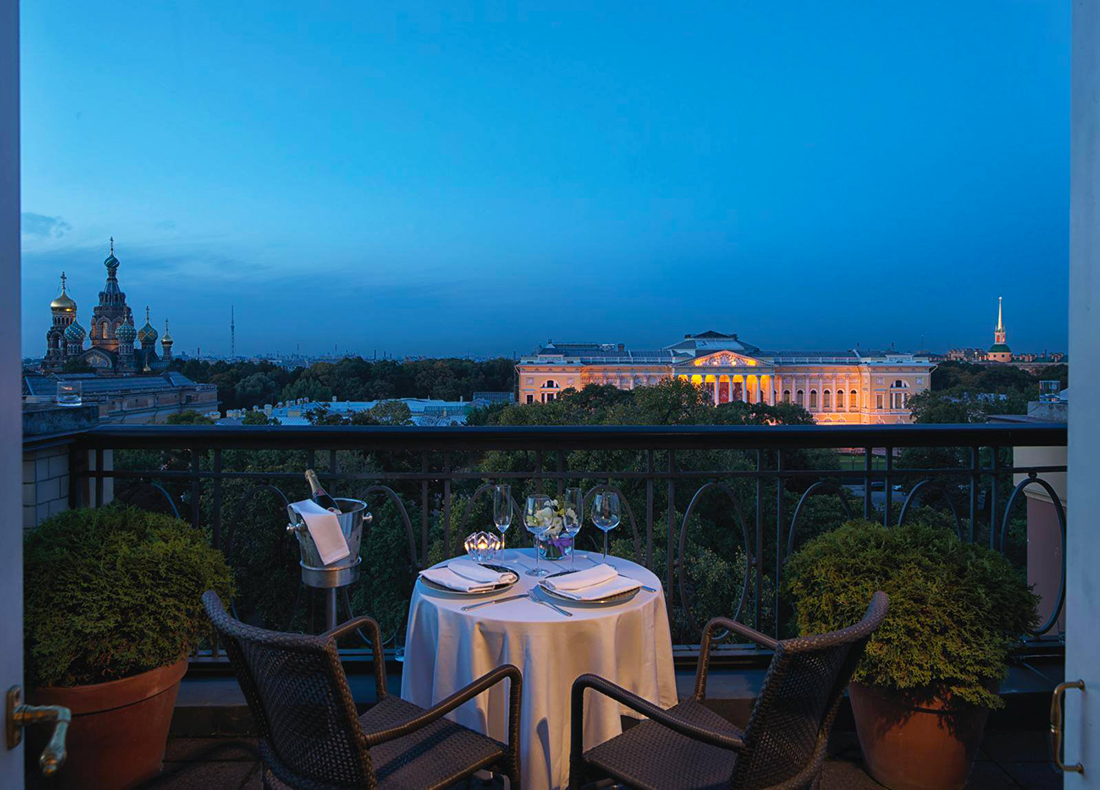 Source: Grand Hotel Europe press photo
St. Petersburg has a number of hotels more than a century old, but only three of them – the Grand Hotel Europe, Hotel d'Angleterre and Astoria – have managed to keep their original names, along with plenty of stories about the celebrities who stayed there. 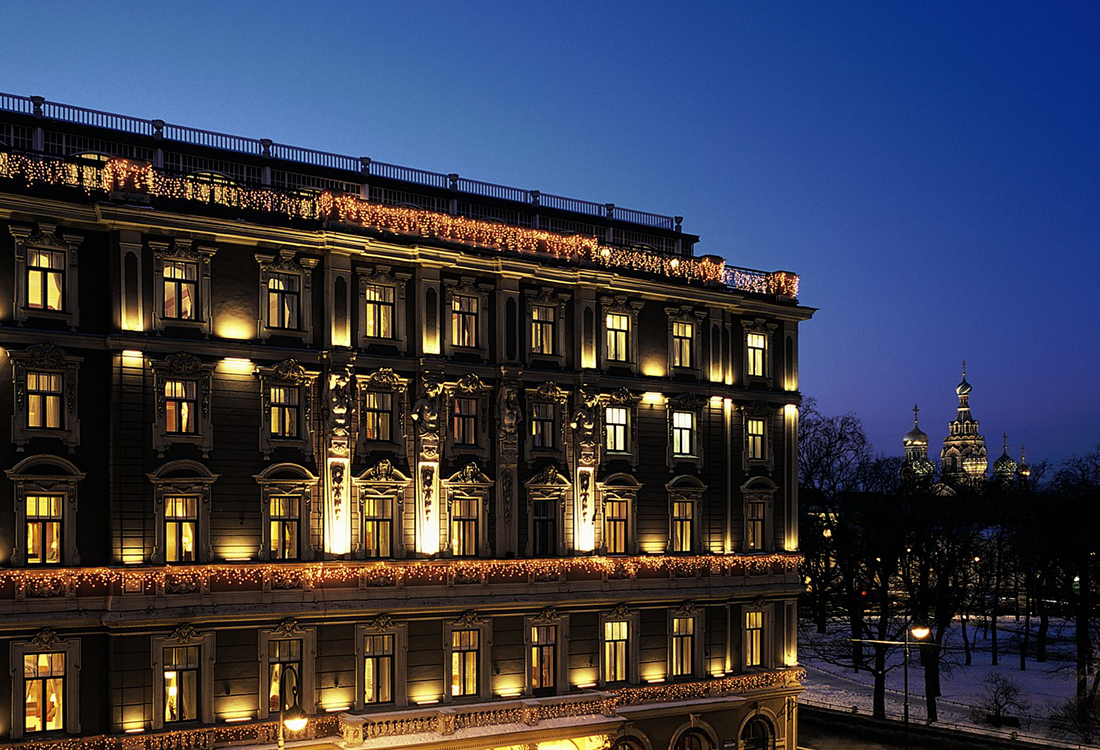 "Here is the architecture of an immense and modern hotel: businesslike, American-styled, with hundreds of rooms – an entire industrial facility," Fyodor Dostoyevsky, the classic Russian writer, wrote about Grand Hotel Europe, where he often came for lunch.

The Grand Hotel Europe opened its doors in 1875. It was not only luxurious but also the most technologically advanced establishment of the then-capital of Russia: Its restaurant had electric lights even before the royal palace. 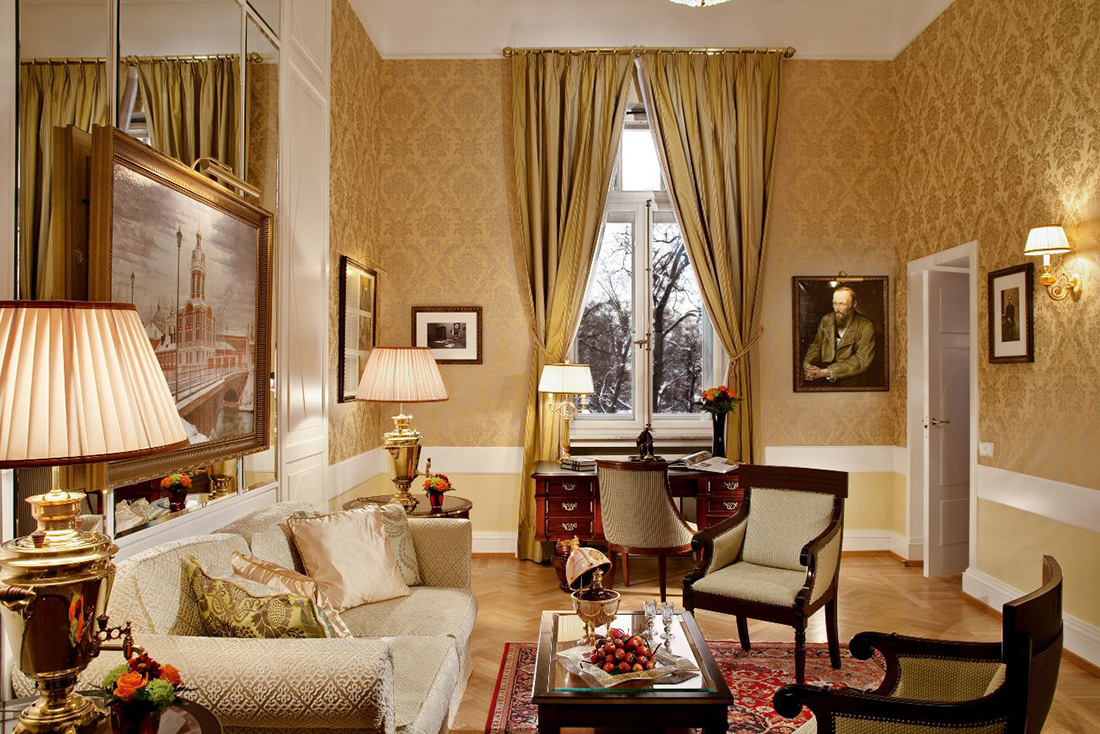 In Soviet times, the Grand Hotel Europe restaurant was the place-to-be for the artistic circles: Renowned authors, musicians and scions of wealthy families came here to eat and drink. In 1979, loyal customers had the opportunity to hear a very special concert: Famous British musician Ray Cooper was at the drumkit on the restaurant stage, and the grand piano was played by none other than Elton John.

One of the first European pop stars to visit the USSR at the height of the Cold War, Elton John gave eight concerts in Moscow and Leningrad. He complained of a "dead audience": unaccustomed to the format of pop music concerts, the Soviet audience sat still as if glued to their seats, and reacted to international hits with moderate applause.

Once, late in the evening after an official concert, Elton John was brought to the Grand Hotel Europe restaurant, where, he finally saw people "of his own kind" – foreign tourists. To everyone's surprise, he climbed onto the small stage. The guests did not try to hide their joy, and more than a few tables were overturned thanks to the excitement. Video of the improvised concert was included in the documentary To Russia with Elton.

Tip: Every Friday after 7 p.m., the restaurant of Grand Hotel Europe treats the guests to live music: a chamber orchestra plays the compositions of Pyotr Tchaikovsky. It was in this hotel that the Russian composer spent his honeymoon in 1877.

2. Isadora Duncan and the "rowdy Russian poet" at Hotel d'Angleterre 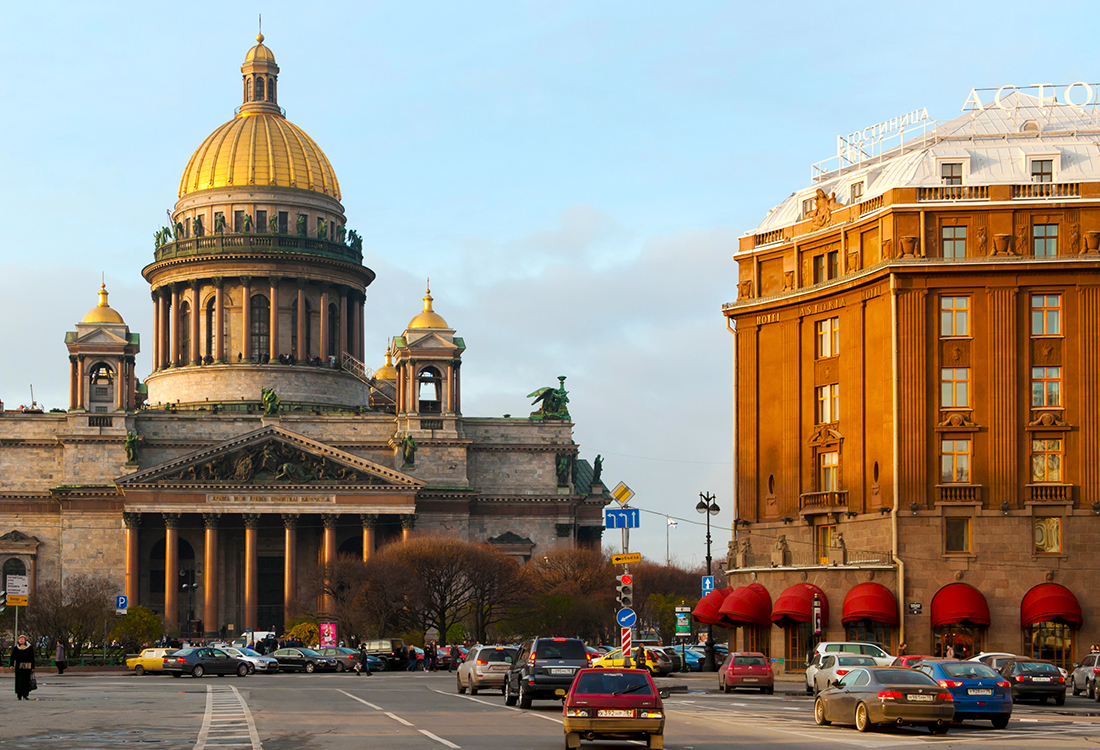 At Hotel d'Angleterre, Isadora Duncan, the 44-year-old pioneer of modern dance, shared a room with 26-year-old Sergei Yesenin, the celebrated Russian poet, whose fame was at its peak at the time. His recitals attracted hundreds of spectators, but often ended in loud arguments or even fights: The poet's hot temper earned him the reputation of a reckless and rowdy troublemaker.

In 1922, Isadora Duncan performed on the main stage of the Mariinsky Theater. Shortly before their stay at Angleterre, Yesenin and Duncan had met in Moscow, where the American dancer had come to start her new dance school, inspired by the ideas of the Russian revolution. Awestruck by her performance, Yesenin, who did not speak any language except Russian, burst into her dressing room and after a few failed attempts to express his admiration with words, he fell to her feet and hugged her by the knees. 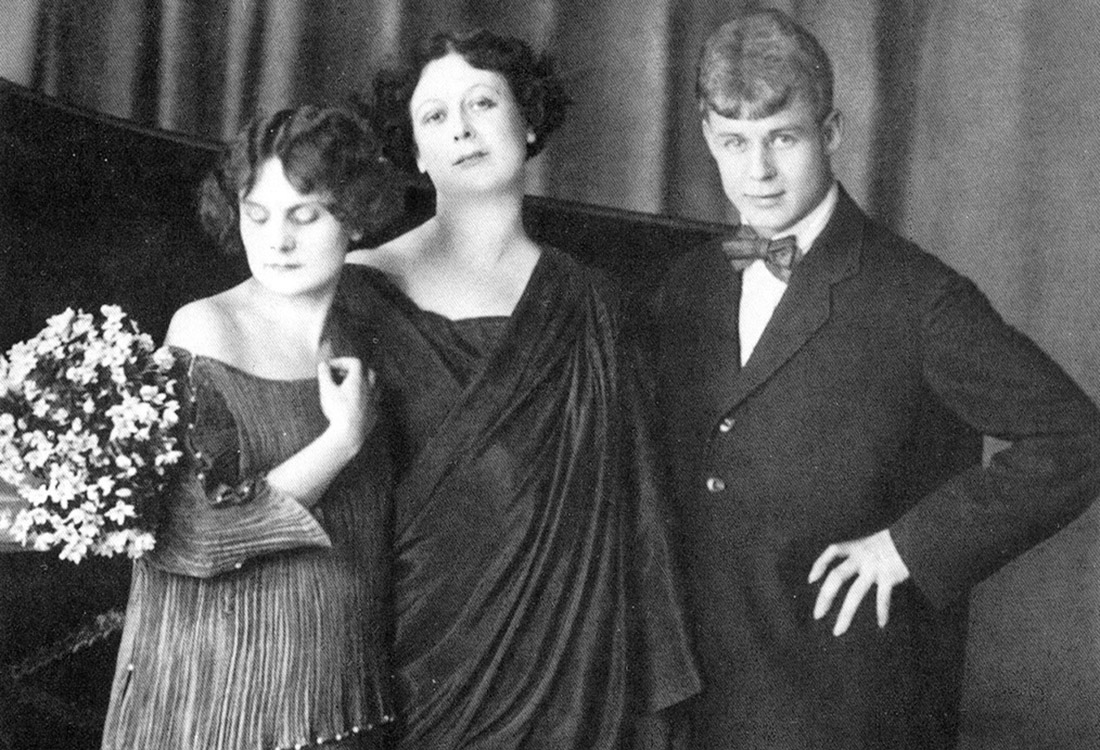 Soon after her tour in Petrograd, the famous couple got married and went on tour, first around Europe and then to Isadora's home country, the USA, where they broke up for good. Yesenin returned to Russia. Two years later, Isadora Duncan received a telegram informing her that her ex-husband was found dead at Hotel d'Angleterre, in the very same room where they had stayed together - Room 5.

Tip: The hotel features the Angleterre Cinema Lounge. European arthouse movies and modern documentaries are screened in the original with Russian subtitles.

3. Science fiction at the Astoria 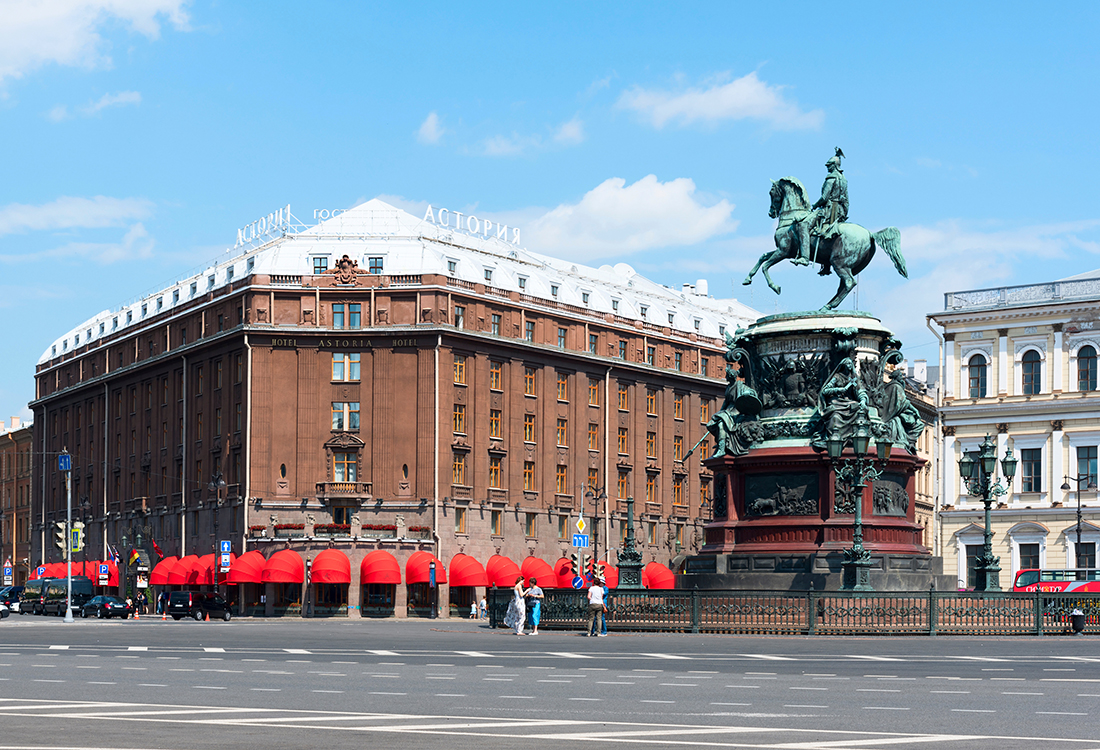 The Astoria Hotel provided accommodations to H.G. Wells, the "father of science fiction." It was 1934, and this third visit to Russia by the author of The War of the Worlds was spent in debates, for the most part. Wells, who had headed PEN International, an international writers' union, came to the USSR to negotiate the conditions under which the Soviet Writers' Union might be included in PEN. However, even a private audience with Stalin in Moscow did not enable Wells to achieve his goals. 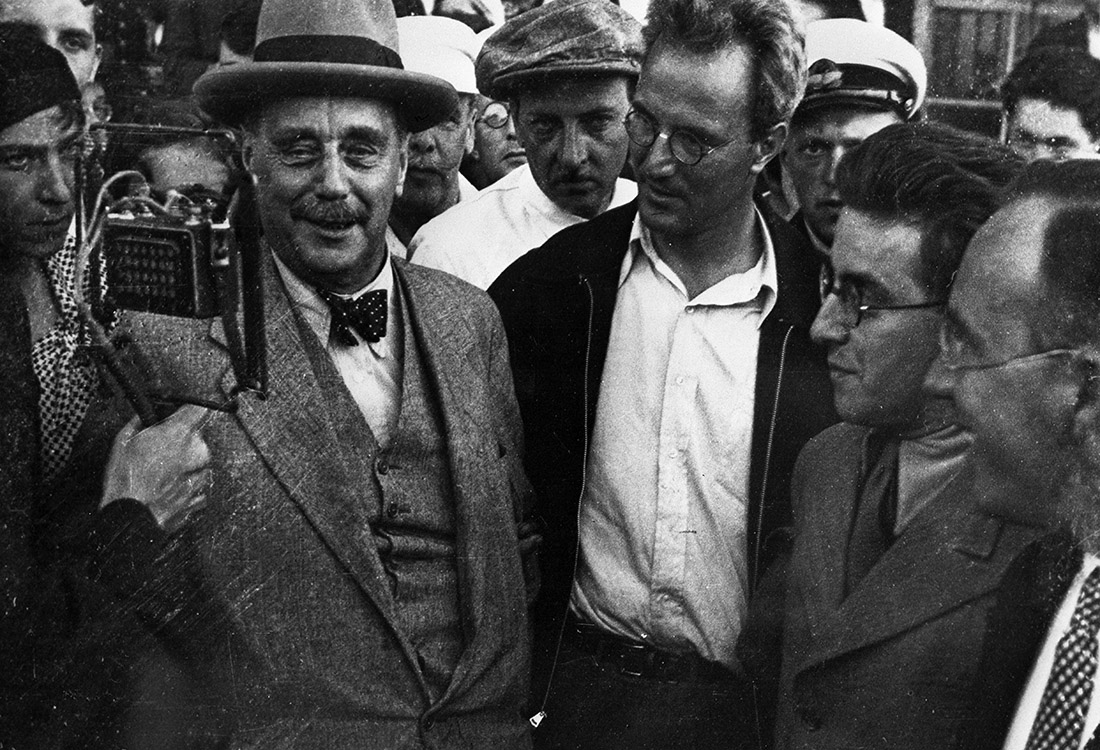 In Petrograd, the country's largest academic center, in a spacious Astoria room overlooking St. Isaac's Cathedral, H.G. Wells received a delegation of popular Soviet science writers: Mathematician Yakov Perelman and science fiction writers Alexander Belyaev and Grigory Mishkevich, who brought along three heavy piles of Wells' works in Russian. By that time, more than 2,000,000 copies of Wells' books had been published in the USSR. It turned out that the total number of copies in Russia exceeded the number in England, the writer's motherland.

Tip: Every day from 3 p.m. to 6 p.m., the Rotonda Lounge on the first floor of Astoria serves tea with Russian blini and jam. The tradition of after-lunch tea parties was started by the very first director of the hotel in the early 20th century. Ever since the brass samovar has been shining and ready in the lounge of the hotel.