French cuisine in a Russian cowshed 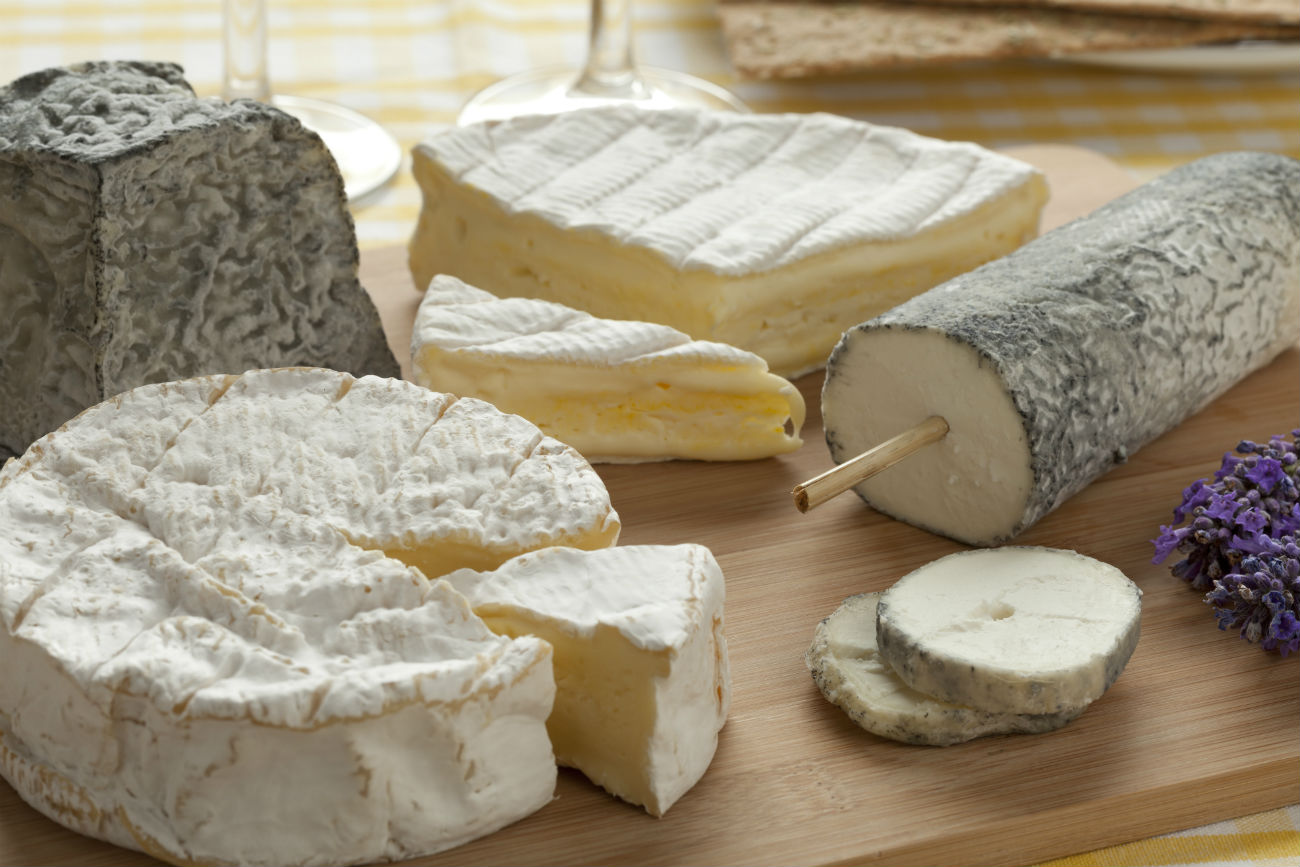 Russian cows listen to French chanson singers. Valençay  and Sainte Maure de Touraine cheeses ripen in a traditional Russian cottage. According to the Derevnya ("Village") farm near St. Petersburg, mastering French gastronomic culture doesn't require centuries of practice – it takes no more than a year of trial-and-error research. At least, that's how it is in Russia.

Non-farmers with an attitude 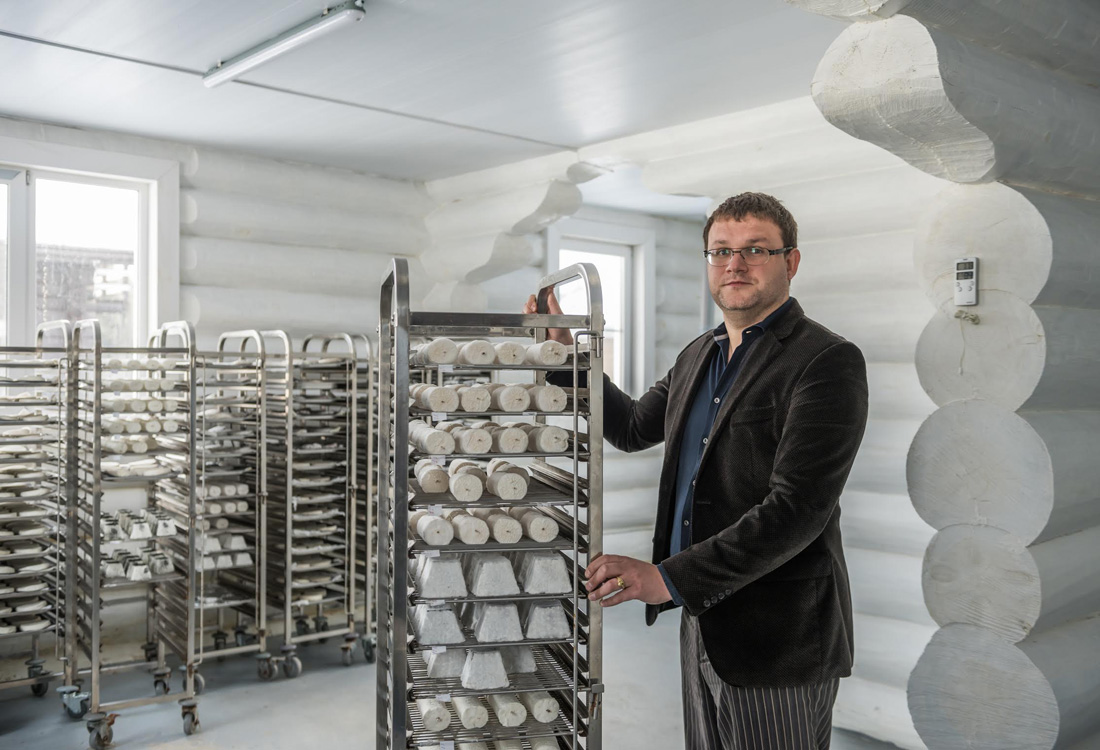 With his striped pants, his corduroy jacket and a nearsighted look above the rim of his glasses, Sergei Ostapov looks more like a stand-up entertainer than a cheesemaker:

"I'm not a farmer. I'm an entrepreneur," says Sergei, casting another glance at his cell phone. It's buzzing incessantly with incoming calls, messages and emails. "Although when we first started, I did everything myself. I cleaned the dung. I milked the cows. I had my arms elbow-deep in cheese. You can't oversee everything unless you've tried doing it yourself."

Twenty years ago, Sergei came to St. Petersburg from Magadan to study medicine. Magadan is a very remote Russian city. It's 10,000 kilometers away from the capital.  It has a worse climate than Reykjavik and a history of gold mining and Soviet concentration camps complete with horror stories. The locals' stamina and resilience are to be envied.

Sergei pushes a plate with an assortment of cheeses from his farm toward me: "You can hardly ever come across Sainte Maure with a straw in a French shop. But we don't cut corners. We do everything the way it has to be done." Sergei has not visited the province of Touraine yet. Some friends of his brought him a piece of Sainte Maure, he tasted it and decided to replicate it: "I don't speak French. To find out about a certain cheese, I refer to American and Australian sources in the Internet. Guys from Danisco have been giving us some helpful advice, too. We buy ferment from them."

Danisco is a subdivision of DuPont, the American chemical corporation. Sergei presses his fingers together in a pinch: "We're like a drop in the ocean to them. They mostly work with large plants."

Svetlana Ivanova, head of the Danisco office in St. Petersburg, just laughs: "There's no getting away from him! Just imagine, a man calls you, without any knowledge or skills. And tells you he wants to start making elite French cheeses with artisanal technology, using mass-produced ferments and recipes from the Internet. I decided it was easier to give him what he was after than to convince him that his idea wasn't worth trying. He'd simply give up on it after he failed."

"This used to be an abandoned field," says Sergei, approaching a solid wooden cowshed. The farm is built in the middle of a wasteland. Nearby, there's a suburban route, a forest and the drowsy five-century-old village of Matoksa, which has survived the Swedes, the Finns, the nobility of the Russian Empire and the Soviet collective farms. And now they have to deal with modern Russian farmers.

Sergei enters the cowshed. Inside, it is well-lit, clean and has a distinctive smell. The cows stare at us with humid eyes. Edith Piaf's voice is coming out of the speakers. Soon Mylene Farmer takes over. "When it's time to milk them, we always play Farmer. She's more dynamic," comments Sergei. The cows yield a ton of milk per day. The assortment of cheeses includes more than 20 varieties made from French and Italian recipes. From fresh goat cheese and Camembert to Mozzarella and Pecorino.

It took Sergei and his wife Anna, who now works as a technologist at the farm, eight months to build a cheese dairy and try out cheesemaking methods: "Our pigs ate loads of botched Camembert!" Today, two years later, Derevnya products are purchased by dozens of fancy restaurants and shops in St. Petersburg and Moscow. "Our cheeses have been praised by David Hemmerle, the chef at the Four Seasons Hotel in Moscow. The French embassy has also purchased a batch," tells Sergei.

Francois Badaire, a reporter for the France3 network, was quite impressed by his trip to the farm: "We were preparing a report about cheese production in Russia. I was amazed at the fact that the farm had been able to set up its production line in such short time. The Camembert is a bit different from the original, though. But the Crème de chèvre and Sainte Maure are more than decent. They are identical to their French counterparts. The cheeses were served with Moldavian wine. But if it didn't take these Russians more than two years to master French cheeses, it may well happen that in a few years' time we will be tasting Russian Camembert with Burgundy wine made in Russia!"

Traditions are nothing and experience is everything

Employing 22 workers, the farm has 60 cows and a total of 500 goats and sheep. Even so, they can't keep up with the demand for their products. Along with human resources, milk quality is a big problem for Russian cheesemakers. "We planned on buying milk from local collective farms. But French ferments don't work well in it. The animals are malnourished. They are given antibiotics. Quantity is all they are after. The lifespan of a cow on a collective farm is five years, whereas on farms like ours, it's 11 or 12 years. We had to invest in our own livestock," says Sergei.

However, the cost of high-quality raw material is high in Russia. The average price of milk for cheese production starts at 43 euro cents per liter. And it's hard to find. In Europe, the price was raised to 39 cents just recently.

"People who are rolling in money hire French technologists. But it's not a good strategy," says Vadim, the technologist of Danisco in the North-West. "A foreign expert would be astonished by the mere existence of such milk and would refuse to work with it outright. By contrast, locals realize there is no alternative. We experiment with various ferments and alter original technologies. And the cheese we make is good quality."

At the entrance to the ripening chamber, Sergei stops me. Tourists are only allowed in a small area of the chamber, to keep it sterile and maintain the necessary humidity and temperature. "Only the cheesemakers are allowed to enter the creamery," explains Sergei and pulls a rack with cheeses closer to us.

The cheeses look and smell exactly like they do "at home," although the founders of Derevnya can't appreciate that – they've never seen it there. "Anna and I traveled around France as tourists and didn't study their cheese factories. Wine was higher on our list of priorities."

Sergei and I finish off the cheese plate. I've already bought some Sainte Maure to eat at home. Now I'm wondering if I should also get some chocolate Camembert or Lune de Blanche, which was created by mistake, as is often the case in cheesemaking. "We overdid it with the Roquefort ferment. The mold mutated. It became white on the outside and blue inside of the cheese. I decided to leave it to ripen. Today it's one of our bestsellers!"

Sergei is proud of his original recipes and is not obsessed with copying "the originals": "I came into the world of cheesemaking all by myself. The French find it hard to understand how it's possible to make anything without a technologist. Thus, they say that Sainte Maure is perfect when it's ripened for three or four weeks. But I don't find it tasty. We have our own way. My chief principle is that the cheese has to taste good."

You can get to the village on your own or with a group of gastronomic tourists for an unforgettable farm experience. For those who are staying in St. Petersburg: The cheese farm is 50 kilometers from the city center. You can visit the cows with a guided tour in a foreign language: English, French or Chinese. To book the tour to the farm, email to info@ferma-derevnya.ru