Hanami in Primorye: Why to visit Vladivostok when the trees are in blossom 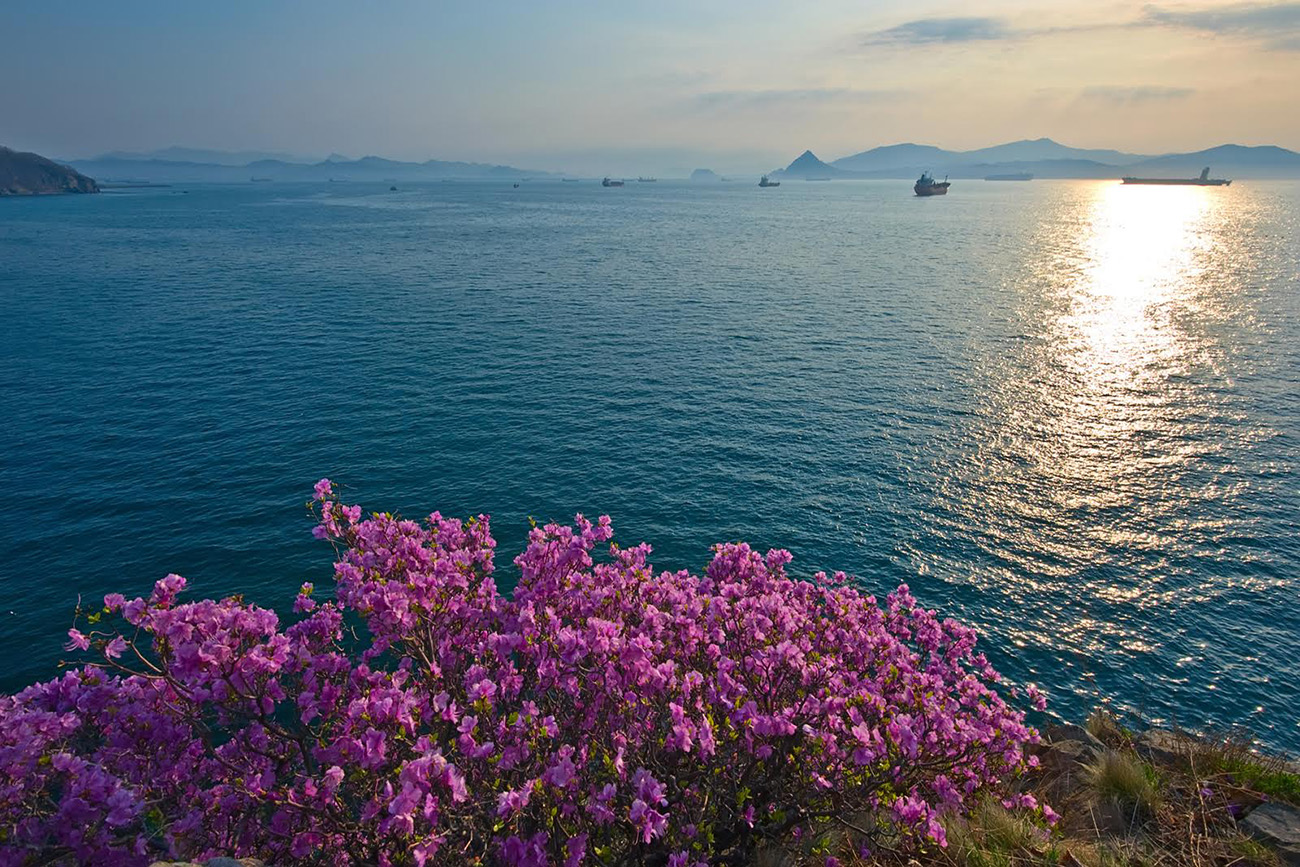 Spring comes late to Vladivostok: Forsythias, apricots, magnolias and other trees have no leaves until mid-May, when the traditional Japanese season of hanami, the custom of enjoying the beauty of the first flowers, is long gone.

'The sakura of Primorye' 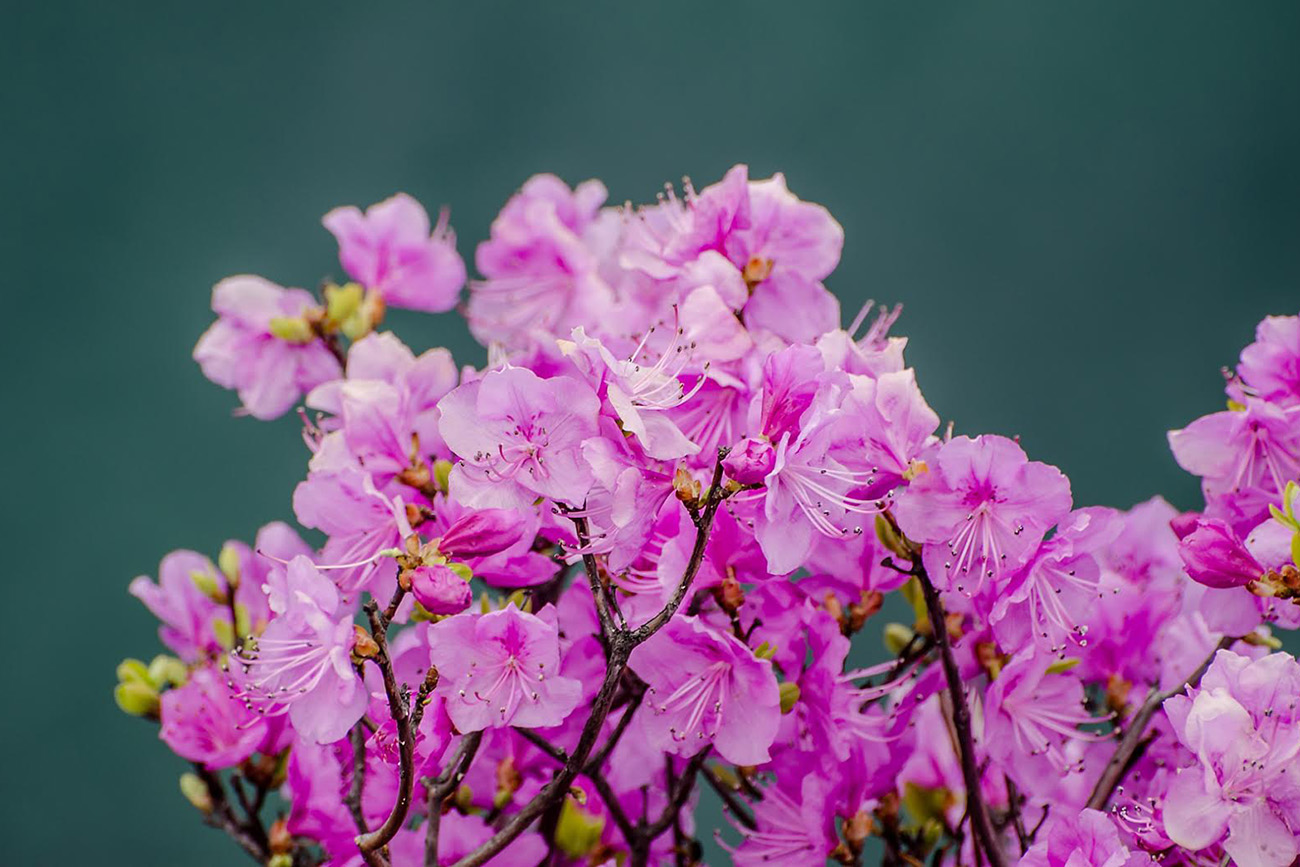 The rhododendron flower became the official emblem of Vladivostok in 1994. And in 2005, the local Botanical Garden introduced the tradition of Rhododendron Day. Rhododendron twigs that are cut in February come into bloom three weeks later if they are put in a vase indoors – this is what made the bush very popular and put it on the brink of extinction at the same time. The Botanical Garden features a large collection of various species of rhododendron from Japan, China, Korea and North America. 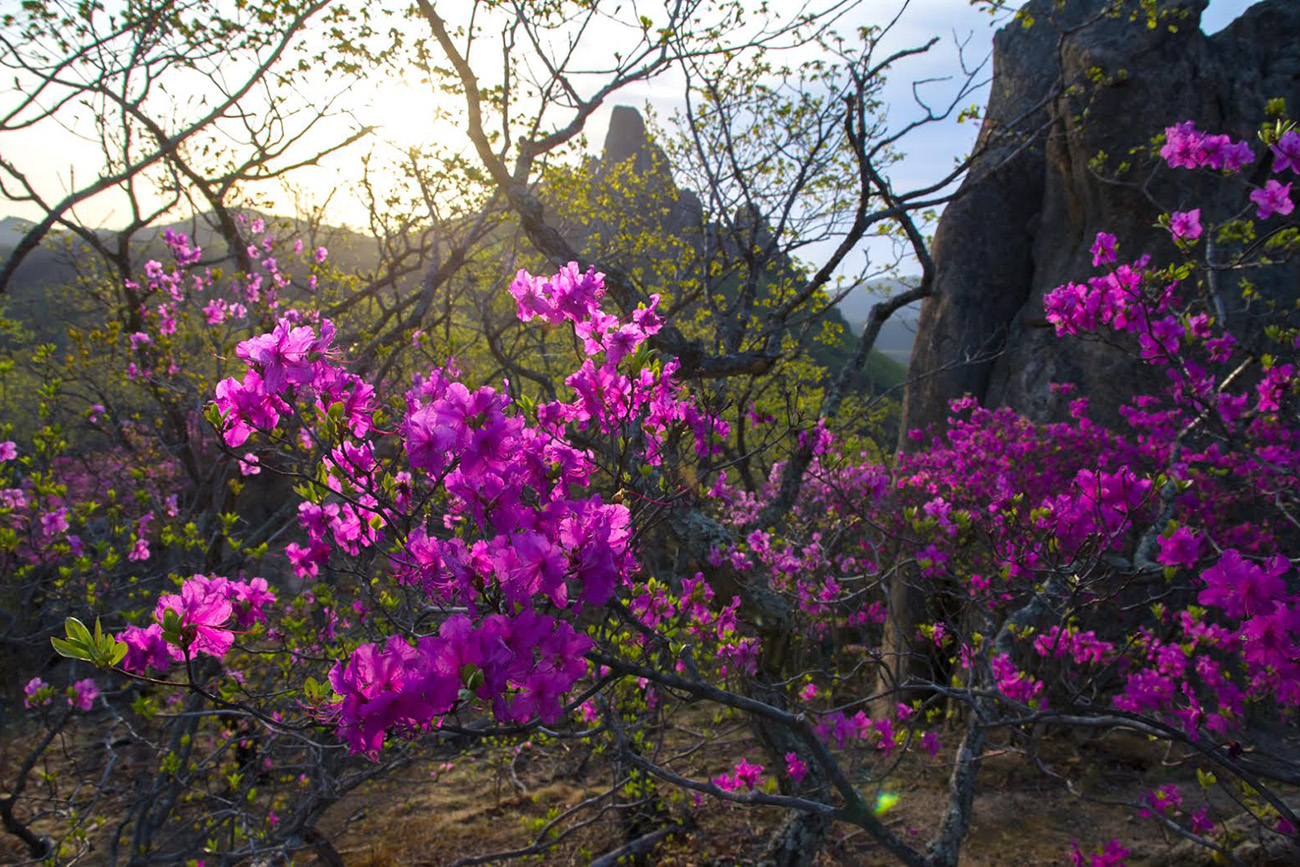 The most spectacular species is the royal azalea, which can be found on the southern slopes of the hills in Khasansky District. It has large flowers, up to seven centimeters in diameter, white or peach-colored. This rhododendron was discovered in Korea and described by Alexander Schlippenbach, an officer from the frigate Pallada, whose name was immortalized in the Latin name of the plant.

In the middle of the 20th century, a grove of unusual trees was found in the Ussuri Taiga on one of the ridges of Sikhote-Alin in the upper reaches of the Dzhigitovka River. Plant biologists found it hard to believe that Primorye was home to an evergreen tree with white flowers and leather-like leaves that curl into little rolls in winter.

However, they had to believe their own eyes: A small grove of rhododendrons of the fauriei species was growing where it shouldn’t. This species is normally found in subtropical forests. In Primorye, this species of rhododendron has formed a sort of symbiosis with local fir trees and barely survives in neighboring regions, even those to the south. This rhododendron does not bloom every summer, so seeing it is a real stroke of luck.

The multicolored decorations of Vladivostok 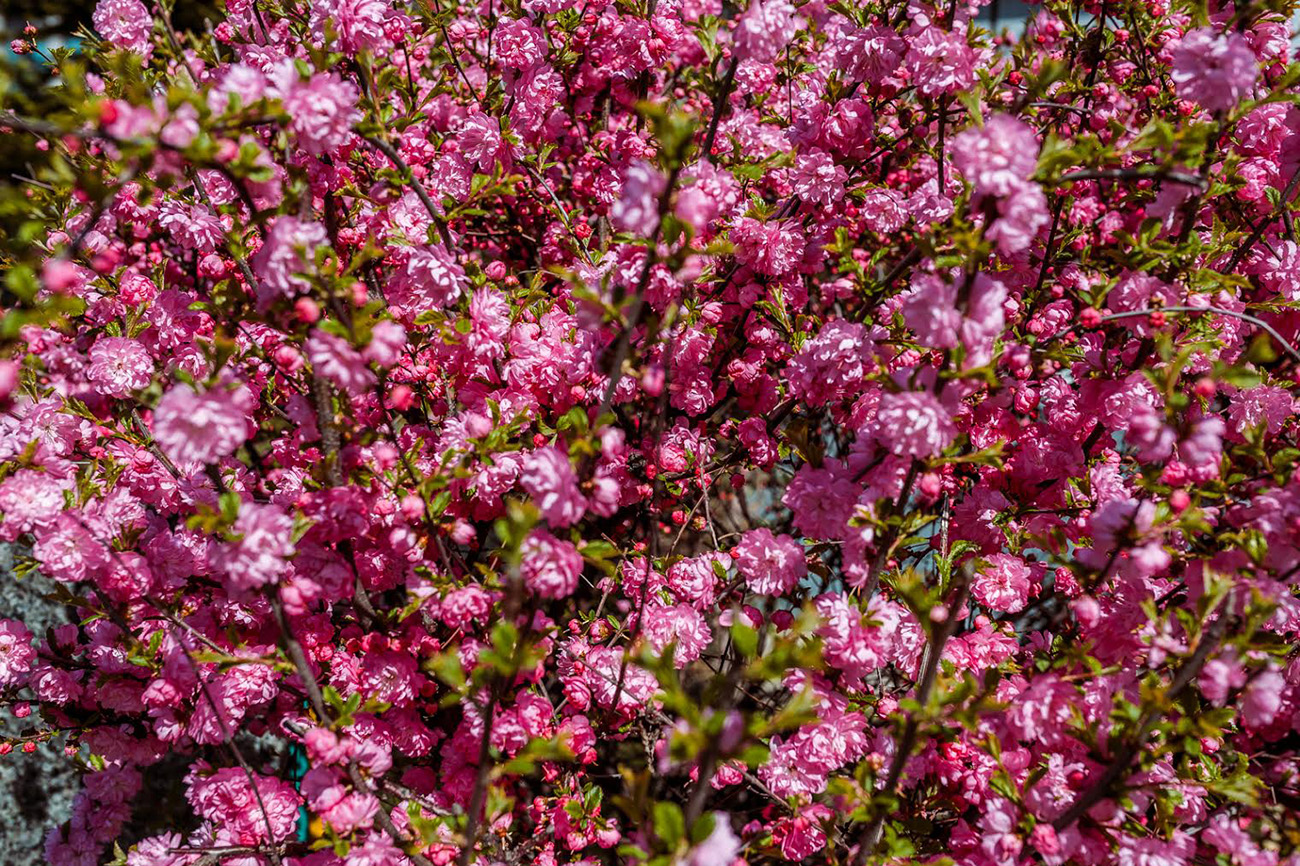 Bright-yellow, star-shaped flowers of the forsythia bush appear late in April. Wild forsythia grows in China and Korea, so its cultivated counterpart feels quite at home in Primorye. It can be found in city parks and around a large bronze tiger statue, which is located by the road next to the Akademicheskaya bus stop. Thick balls of vivid yellow flowers illuminate the trees, as if warming them up in the chilly air. 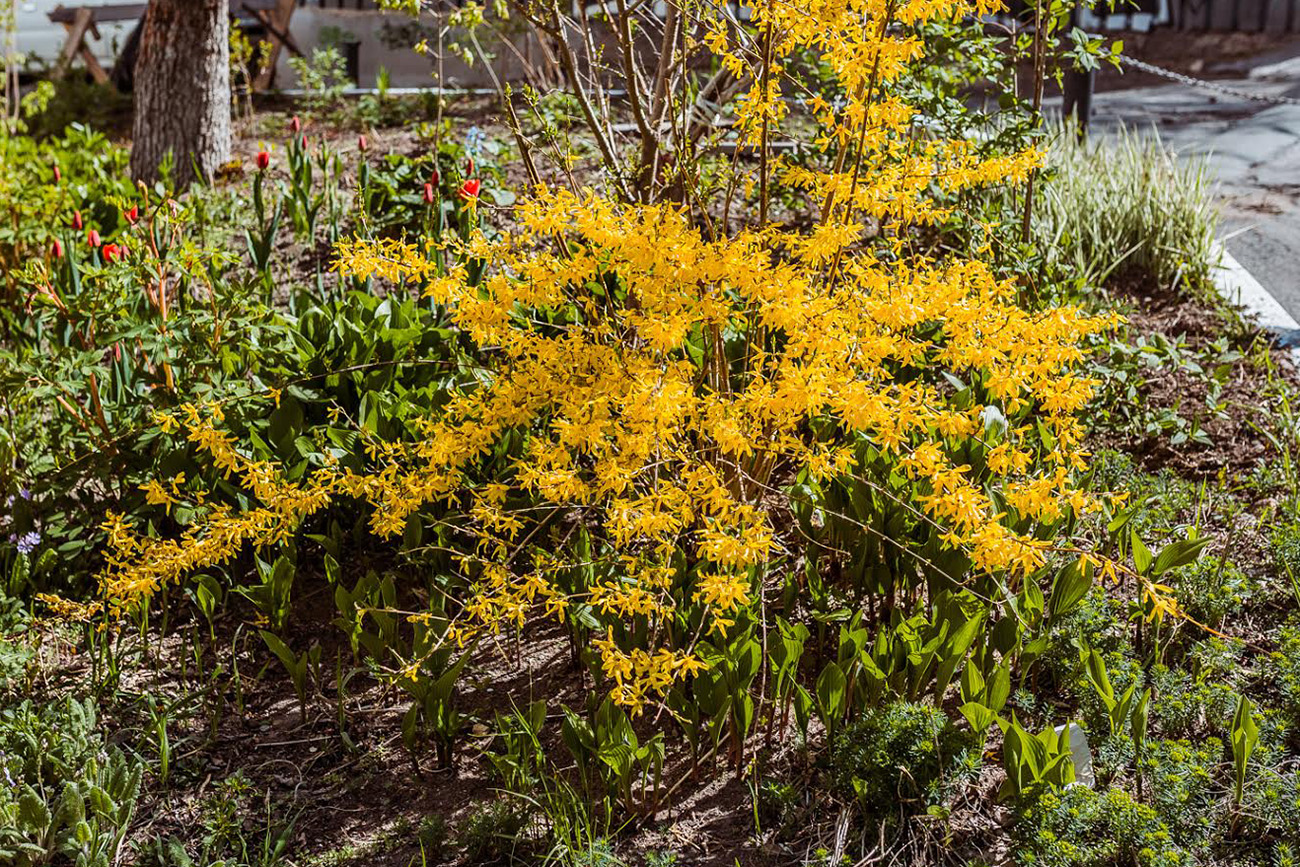 The forsythias are followed by apricot trees: Primorye is home to a few wild species of Manchurian apricots, which were brought here for cultivation as early as one thousand years ago. The wild apricot is a short tree with pale rose flowers. However, the Vladivostok apricots are descendants of its cultivated counterpart: big trees with deep-pink flower buds and flowers of a lighter shade. These trees are scattered across the hills and along city streets. The apricots are small, greenish and bitter – it’s not a good idea to taste them.

The Ussurian pear blooms with large, white flowers a bit later than the apricot, in the early days of May. A few picturesque pear trees dot the main road of Vladivostok – the Centennial Avenue, – and the pear tree near the Stroitel Stadium neighbors a small apricot grove. 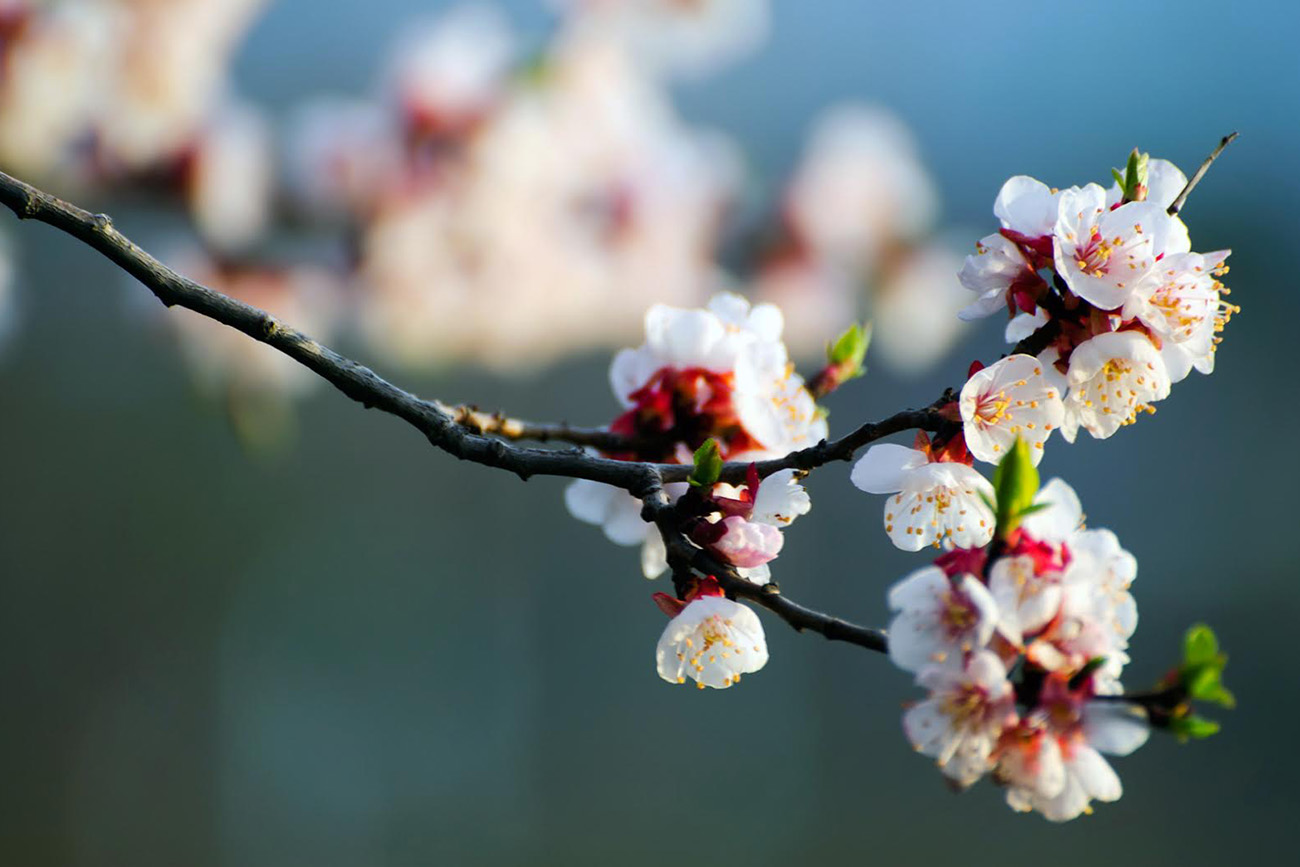 In Japan, sakura is a generic name for various species of flowering cherry trees. There were several attempts to introduce them in Vladivostok, but the climate wasn’t warm enough. Eventually, Japanese biologists determined which species could survive in Primorye.

The largest and the most picturesque sakura garden is located on the grounds of Vladivostok State University of Economics and Service. When the trees started blooming, they turned out to be Sargent's cherries. This species is common on Sakhalin, the Kurile Islands, the Isle of Hokkaido and the Korean Peninsula. Nevertheless, these trees are also found along the sea coast of Primorye.

The city parks and squares don’t have too many flowering trees, so the best place to admire the spring blossoms is the Botanical Garden. You’ll find it by the roadside in the suburbs, and it’s always bustling with visitors, who come here to enjoy the scent of the flowers and take a selfie with the first primroses, alpine irises, violets, magnolias, tree peonies and Tatewaki butterburs with their large, palm-like leaves.

Wild magnolias grow on the Kurile Islands, so the first attempts to grow them in Primorye were unsuccessful. However, today Vladivostok parks hold a few dozen magnolias, and the Botanical Garden features what may well be the country's largest collection of these southern trees. Irina Petukhova spent more than 30 years collecting magnolia seeds of various species, planting them and selecting the most frost-resistant ones. As a result, almost 20 species of magnolias attract thousands of people who come to see their flowers from the middle of May to the end of June.

Tree peonies come into bloom in mid-May – a few weeks earlier than their herbaceous counterparts. Yet their flowers only bloom for a couple of days, so their evasive beauty is hard to catch.