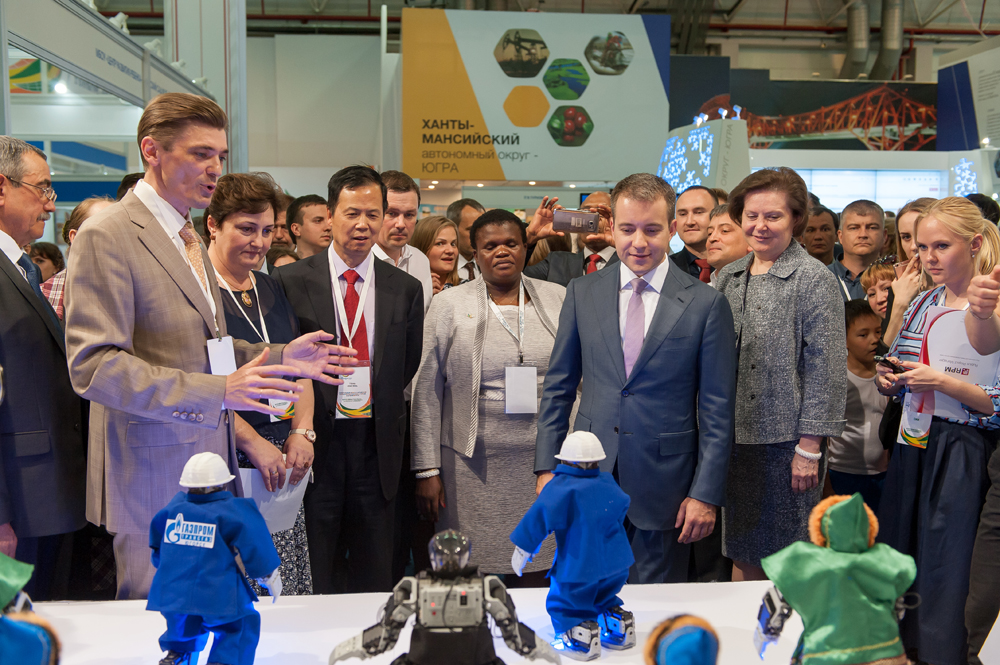 The Minister of Communications and Mass Media Nikolai Nikiforov (C) at the the BRICS international IT Forum.

Press photo
Members of the BRICS international IT Forum have established a telemedicine community in Khanty-Mansiysk. This group has set itself the task of creating inter-operable telemedicine systems in BRICS countries.

The Telemedicine Community set up by the BRICS international IT Forum has appealed to the Government of India, the current chair of BRICS, to support the project.

Natalia Komarova, Governor of the Khanty-Mansiysk Autonomous region Yugra, said a discussion of financing models will begin at the international economic forum in St. Petersburg in the next few days.

“I intend to introduce him to the projects of the initiative group for the creation of the Council of BRICS regions, raise the issue of creating a model of financing of the telemedicine systems in our countries,” said Komarova.

Yugra, a region in northern Russian, has a large number of remote and hard to reach localities. Opening a traditional network of major medical centres in every settlement is unjustifiable. In such areas, telemedicine allows the state, the governor noted, "to provide a standardized medical service to every person, wherever he lives."

The technology permits people living in a remote village to find a medical specialist without having to travel hundreds of kilometres. The specialist can decide whether the patient needs to be sent to the hospital or whether home care would suffice.

Specialized infrastructure has been created in Yugra in the last few years. Telemedicine rooms have been organized in over 40 of the 198 hospitals. All the hospitals are linked by a secure corporate communications network. In Russia, Yugra is second only to Moscow and St. Petersburg in the use of IT-technologies.

Cooperation in telemedicine from other regions of the country allows Yugra to increase the effect of the established infrastructure and foreign technologies in medical treatment, and to develop infrastructure taking foreign experience into account. Initially, the telemedicine systems that are not compatible today have to be linked to each other.

“There are dozens of reasons why national health systems are not compatible with each other”, said Mikhail Natenzon, member of the Board of the Russian Telemedicine Agency. “These are according to the classification of diseases, to the normative-legislative framework and so on. But when we say that we need to make sure they are compatible, it does not mean that they must be identical. We must provide for a solution where the systems could interact with each other,” Natenzon said.

Despite the complexity and diversity of the project, experts believe it can be successfully implemented.

“We need to solve many problems: put together different equipment into the network, overcome language barriers, and level out the difference in the time zones,” said Saroj K. Mishra, head of the Department of Endocrine Surgery at the Sanjay Gandhi Institute of Medical Sciences.

“While there is a time difference of 30 minutes between my centre and the Khanty-Mansiysk, the difference with Brazil is measured in hours. And so on, but the potential is also high. Firstly, the project reflects the trend of globalization. Secondly, patients move around the country: the physician should be able to monitor their health, and they should be able to consult him. In addition, this idea can allow each country to become the entry point to the telemedicine system for other countries,” Mishra said.